[A little word about this: I feel this has aged poorly. I wrote this because I felt uncomfortable sharing that I was playing the Sims and that was, primarily, on me. I felt uncomfortable, not because it was really true. So I needed to write it, but I'm well aware it's not particularly... progressive or insightful to anyone not stuck in pretty bad gender roles.]

I shouldn’t have to write this. We all know the words up there aren't true. But I found myself not comfortable sharing what I’m about to share, and that’s exactly why it is worth sharing. There’s still a struggle here. I have to write this, at least partly for myself, but also because they are words that bear repeating.

So, I’m playing the Sims. The Sims 4 to be precise. It was on a sale on Origin, and I thought, ok, finally, now, what the heck, let’s do this.
But then came a strange struggle for me. I had this initial reaction, this shame, this dumb fucking shame of not wanting to be “seen” playing The Sims.
I didn’t want to talk about it.
Because I know what the reaction is going to be. And I just didn’t want to deal with it. 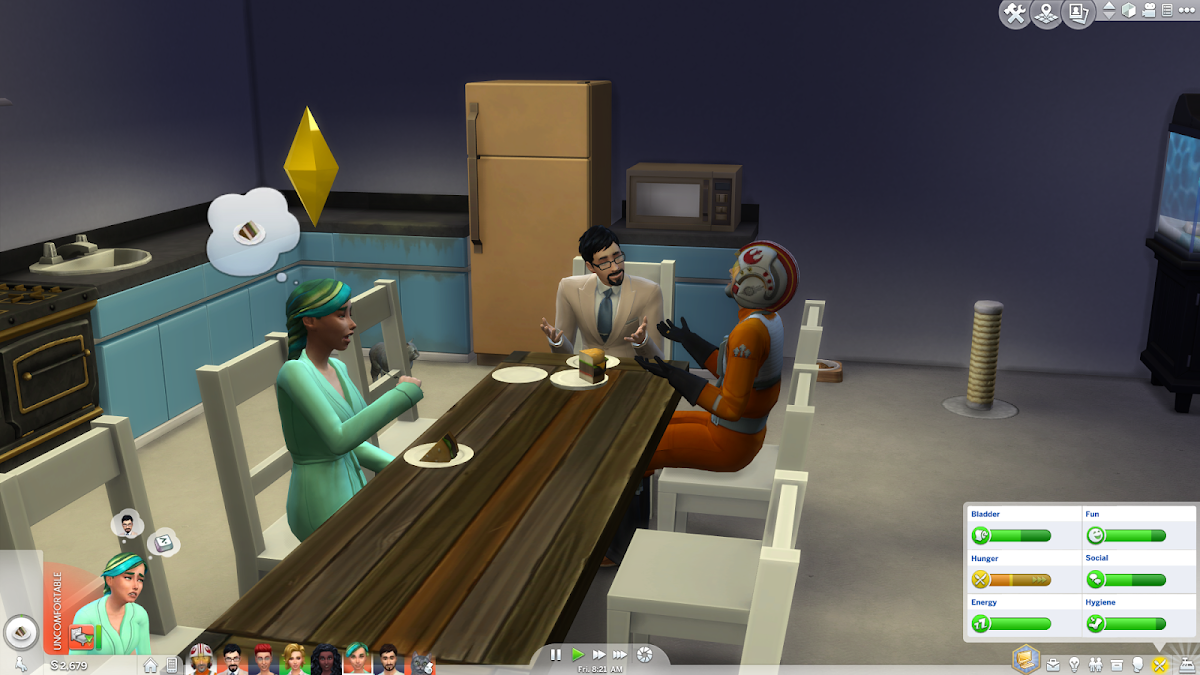 They're just sitting and talking! There's not even any violence!

I don’t think the people around me will dislike me or anything. I don’t think they’ll think me a girl or “less manly” or whatever for it (they should know I don’t care at this point)
But—they will ask.
If I say, “so, I’ve been playing the Sims this weekend”, that first question will be “you played The Sims??”
It will be asked incredulously. Not because they won’t allow me to. But because they didn’t expect me to. And they definitely don’t expect me to like it.

And no, they won’t specifically say the words in the title, and they might not even think that, but that thought is the underlying current for why it is surprising I am playing the Sims, even if they don’t think it.
Of course I’m “allowed” to play the Sims. Me being a boy doesn’t stop that. 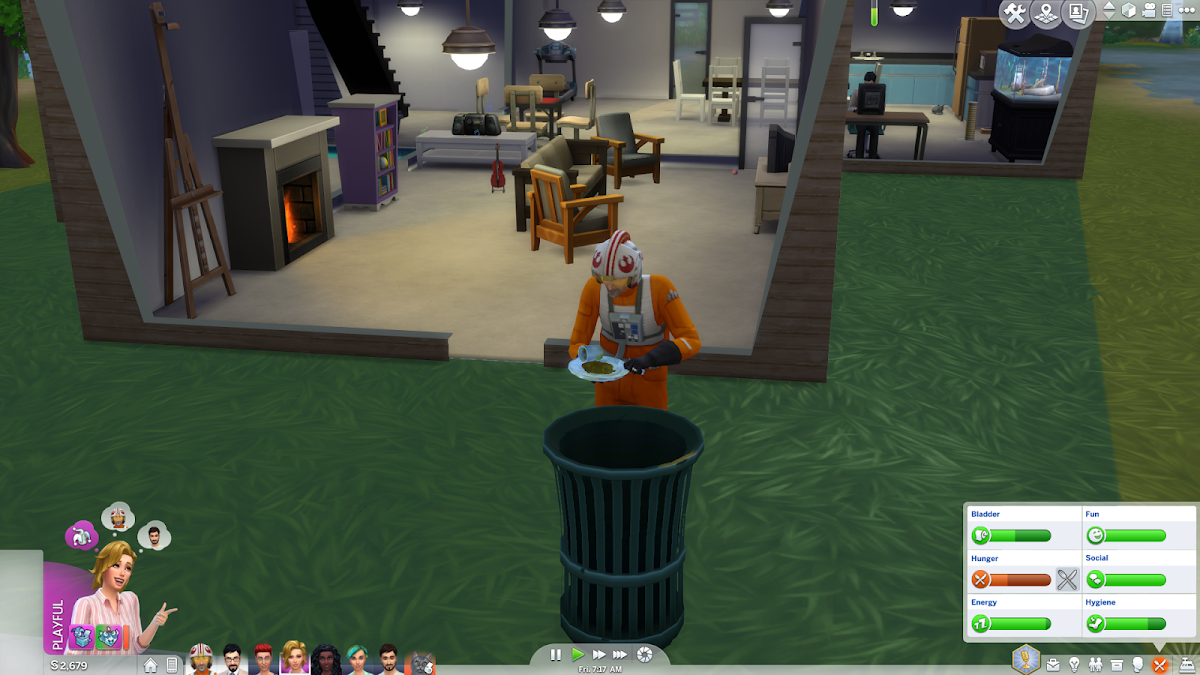 This is Han. He's old, but a huge Star Wars fan. [hey, I had to use those SW costumes for something!]

But gender politics is not always about allowance. Sometimes, it’s just about acceptance.
Most agree that gender equality should exist. Some believe it does. But the difference is that just because every gender is allowed to do anything does not mean that all genders are evenly accepted to do those things. It is less accepted that girls play video games. It is less accepted that boys play some video games.
But it’s not even about acceptance. People will accept me playing the Sims, but probably after they’ve asked the questions, and still find it weird after.
But if I say I’ve been playing the new Assassin’s Creed, there’s no questions. It is already accepted that someone like me plays Assassin’s Creed. They’ll just immediately ask how the game is, instead, removing the focus from me to the topic I wanted to talk about in the first place.

And sure, you could say they’re just questions that don’t matter.
But it is harder for me, and I am sure it is too for other people, to share those outside experiences, to do stuff outside what we’re “expected” to. It is harder to enjoy stuff regardless of what other people think when we know that by sharing what we did, they won’t just accept it at face-value, but ask why you would do such a thing—it clearly can’t be because you wanted to.
We have to be interrogated first. So, a lot of the time, we just avoid sharing it, or worse, avoid doing it all together.

So, please, when I say I play the Sims, don’t fucking ask why. Instead, ask how it’s going.
It’s going okay, thank you. I have an old guy who’s a Star Wars fan. I have a lazy, jealous comedian who’s tense when her husband is not around which is all the time because he’s a chef and they have different working hours.

Is this partly about my own insecurity? Totally. No doubt. But that insecurity comes from a place. If our society wasn’t geared around the expectations of genders, that insecurity wouldn’t be there. 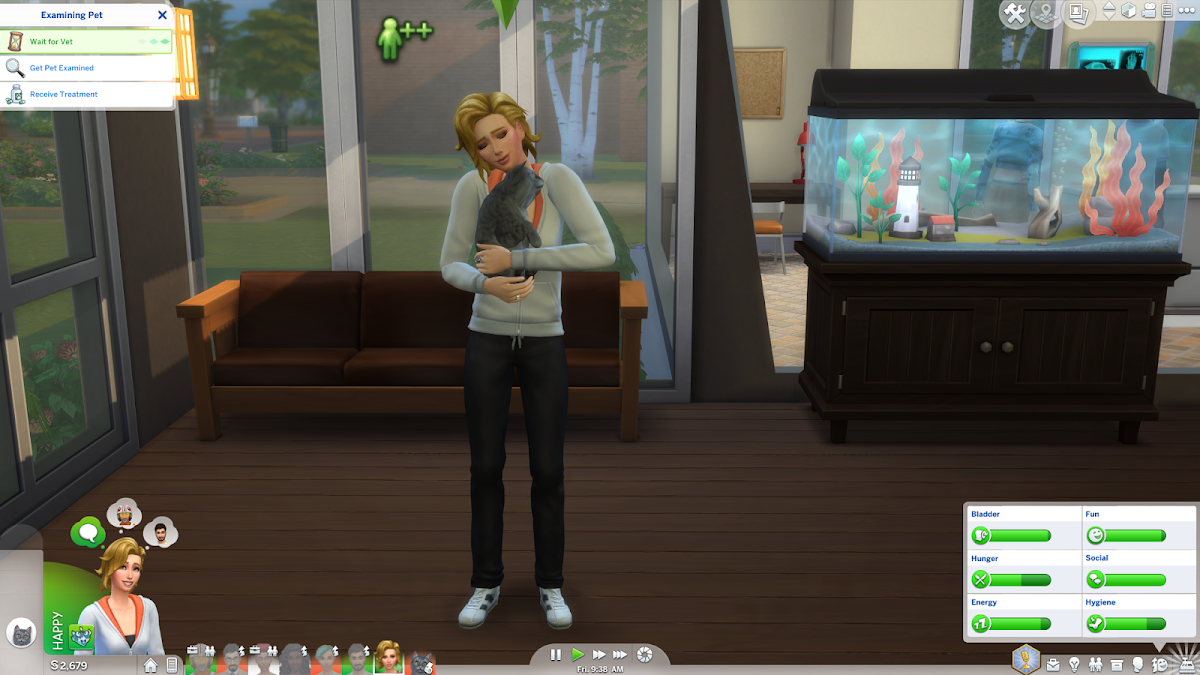 I had to take my cat to the vet!