Your breaths condense into the air as snow drifts to the ground, obscured by thick, yellow fog. Two of your friends stand next you, pondering the same question you have for almost a year: Who killed those two people?
Only, now, it’s time to give an answer.

After 80 hours, you’re ready. You’ve just spent that long playing Persona 4, a video game with too many great character moments to count, yet here you face one that, for me, stands above the rest.
It’s a small, innocuous moment, with only three stationary characters and almost no spoken words, but it is a turning point that propels the game into its final act, and it does it in one of the cleverest ways a murder mystery can.

The moment I’m talking about doesn’t really have a name, and it isn’t anything special. It is as simple as a scene can get: Three characters outside a diner in the snow, talking. Nothing else. No fancy tricks, no theatrics, no music, nothing. The camera doesn’t move an inch. 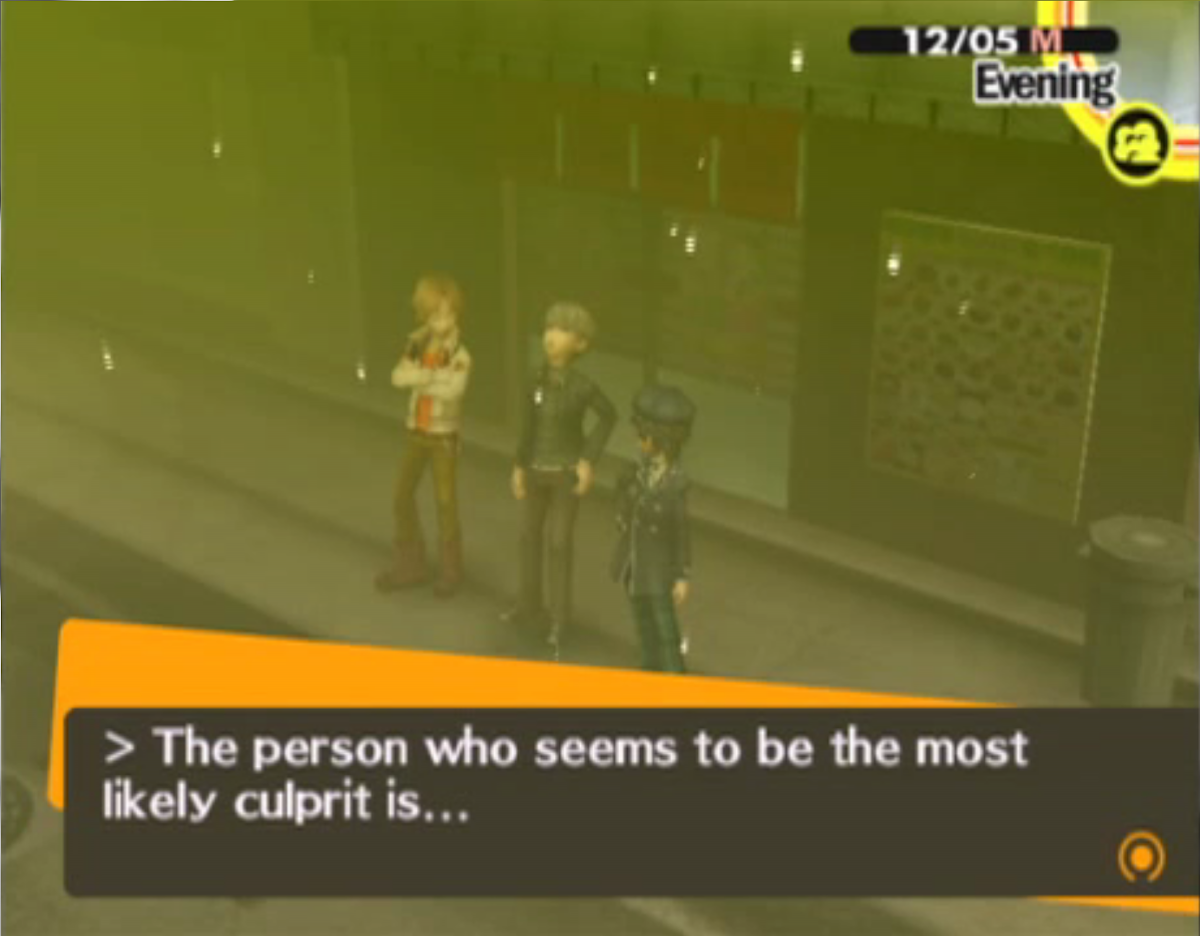 Photo from the Giant Bomb Endurance Run. If you want to see the moment in full, it starts at 17:30 here.

Which, even by 2008’s standards, isn’t impressive visually. It’s just there. It’s pretty bland-looking. And yet, it is one of the most effective moments of the game.

Allow me to set the stage:

(Spoiler warning: I will spoil a lot of Persona 4 (although not all of it). If you don’t care or aren’t going to play a 100 hour RPG (I won’t blame you), read right ahead—hopefully I’ll impart the moment’s importance anyway.)

Persona 4 is a murder mystery, where 2 people mysteriously die and are hung from TV antennae, and afterwards several more people get kidnapped by an unknown assailant. The protagonists manage to rescue all the other people but rescuing all those victims do not get them any closer to the real killer, but is instead, a ruse.
Just before this moment, the main characters captured who they thought was the culprit, only to rule out that Namatame (the name of the guy) couldn’t possibly have killed the first two people, but he is the one behind the kidnappings (but not with the intent of killing them (complicated, and not important here)).
After frustration, fear, and a little internal strife, they have to admit defeat: This wasn’t the killer. The person you’ve been chasing the entire game, wasn’t it.

All the main characters in your group of close-knitted high school friends are stuck: All this work, and they were so close, thought they’d done it, but now they are without a trace and without a clue. The killings are over six months old—there isn’t likely to be any evidence they or the police have missed.

So they all sit at a diner to have some food and a think, but can’t think of anything. And so, the main character and his closest friend, Yosuke, and the detective kid of the group, Naoto, go outside to get a breath of fresh air.
They talk briefly about the snow, before the main character summarizes the main facts in his head, briefly, for the player.
And then, as your friends stand there, it arrives at the core question:
Who could it be?

And then the game reveals its genius.
It provides you with a list of options of who the culprit could be that includes every single character in the game.
No one is left out: Every single major and minor character, every named person you’ve ever met who had otherwise no part in the main plot are all there, listed right next to each other. Teachers, students, family members, far our acquaintances you’ve maybe met once, your own group members, everyone. (looking back, it’s not actually everyone, but it’s everyone you’re likely to remember at this point, and it’s still a lot).
And you have to choose. The game doesn’t progress until you do. Your friends stand there, in the snow, waiting for you, thinking through the same thing. 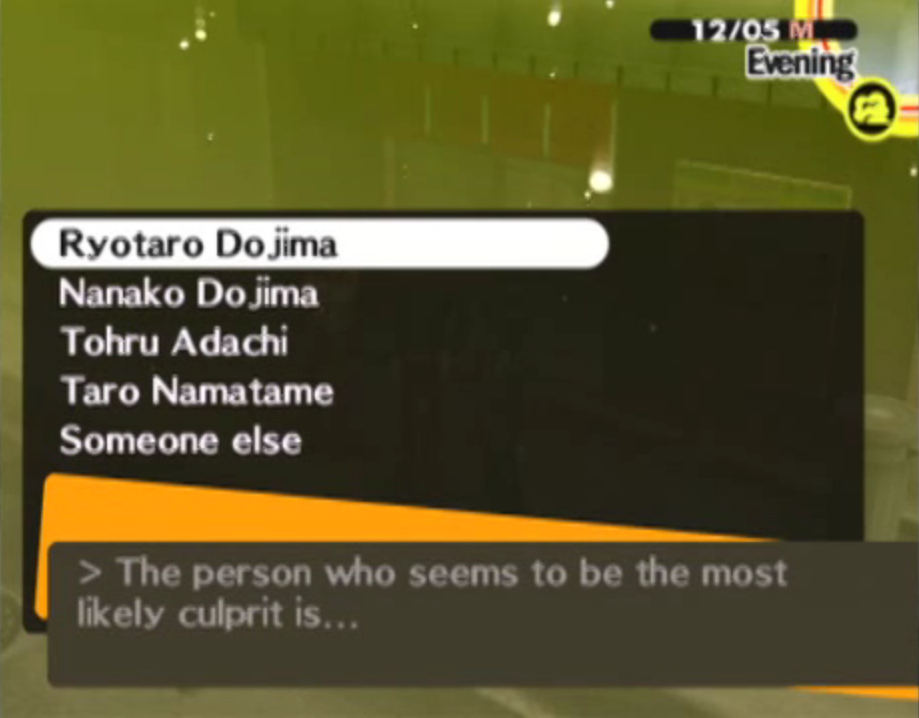 You shuffle through the names little by little and the list just keeps going. (Even the character they've just ruled out as impossible moments before!)

This could have been tedious, it could have been impossible: Think of any large cast of characters: Persona 4’s is huge. There’s a lot of people there. How could you possibly choose any one of them with any confidence?
The simple genius of this scene is that it first implies that it could be anyone: Any person you’ve ever met could be the culprit, and it makes you, for a brief second, reevaluate the entire experience: All the previous 80 hours are cast in a new light as you scour through them in your mind, trying to think through what you’ve missed. Even if you already guessed it, even if you already had a suspect from hour 20, this list makes you reconsider, if only for this moment.

And then, slowly, it dawns on you, as you rule out the names, first the ones that are too ridiculous, then too improbable, then unlikely, and you realize you only have a handful of options… then a couple…
Then one.

I don’t know if this is the case for everyone who plays it, but I watched a let’s play of this game the first time out and they came to the same conclusion as I did:
“It’s gotta be him, right?”

They hovered on the name a while, thinking it through. They went through the other names again, but settled back on his name again.
And thus, the scene reveals the real genius behind it; the truth hidden in plain sight: It could only have been one person the whole time. Of all the people you’ve met, there’s no other person who could’ve done it.

And the game makes you come to that conclusion by simply presenting you with a list of all the characters, as if saying “who else?”
By the process of elimination, by forcing you to choose, you realize the answer that’s been there all along: You, the player, solve the mystery. Because the game finally asks you. It has the guts to expect you to figure it out and the patience to wait until you do.
Granted, I don’t know what happens if you keep picking wrong names—if your friends just keep shooting them down until you finally pick the right one, or if they eventually rule over and answer for you (I hope not!), but regardless, I feel like most people will come to the same conclusion simply by looking at the names and going: “who else?”

There is no music, there is no fanfare, there is no grand reveal (until later). There’s just a few of your friends, standing in the snow, talking, as the world is about to end. And then, among the snowflakes and the fog that makes it impossible to see more than three meters ahead of you, you speak aloud a name. Just four syllables, out there, that ring into silence and propel you onto the finale of a story that always only could culminate here.

You just didn’t know it yet. 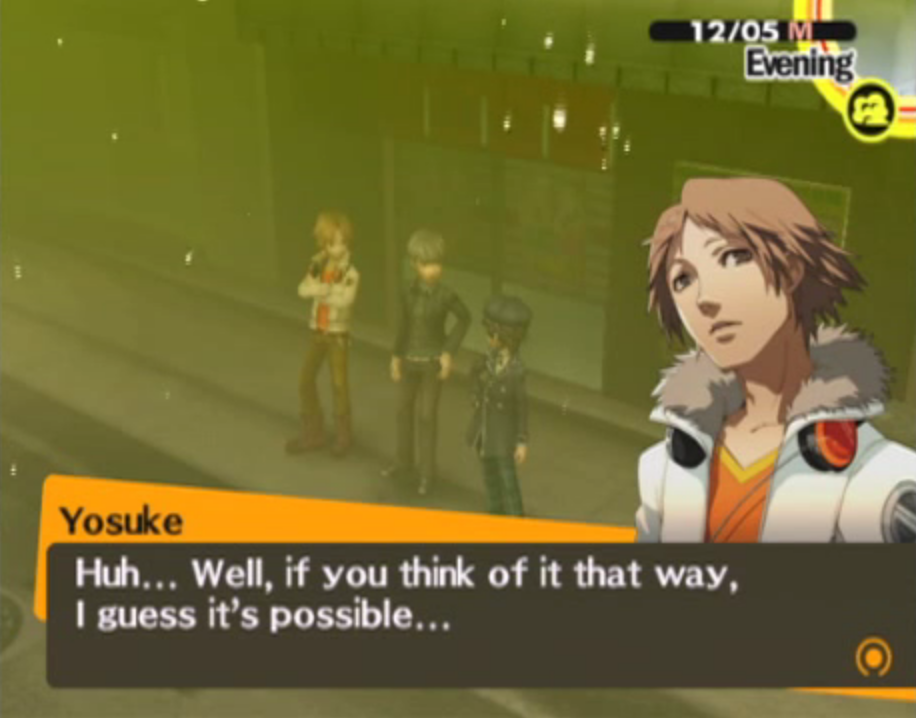 Thank you for reading!

This is part of a new feature that you’ve probably guessed the premise of already. I’m going to pick a great, iconic, or powerful moment from a game, movie, piece of music, or other media (although in the beginning it’s gonna be mostly games I think, but I’m open!), and analyse it, investigate what makes it work and why I find it to be a moment worth sharing.

Because I am who I am, it’s going to be a lot of narrative moments, a lot of key story points, but I want to especially focus on smaller moments, and some impactful things that seem innocuous at first glance (like this one or this previous piece I did on Horizon). So I’ll try to avoid the huge, defining moments everyone talks about (although I do have the Sovereign conversation from Mass Effect on the list, so I’m not going to shy completely away from that). I want to focus on the smaller stuff, the things that gets omitted often in the large conversations but that is equally important to instilling character and emotion into our stories.
A moment like the snow scene in Persona 4. Because those are the moments that matter to me.
Hope you'll keep reading!