So, I got an Oculus.

It's one helluva cool thing. It's VR, it's 1080p, it's got motion tracking, it's got a eyetoy-like camera staring at me all the time now (I mean, really, everyone's against the Kinect, but this is fine?? I'm kidding.) 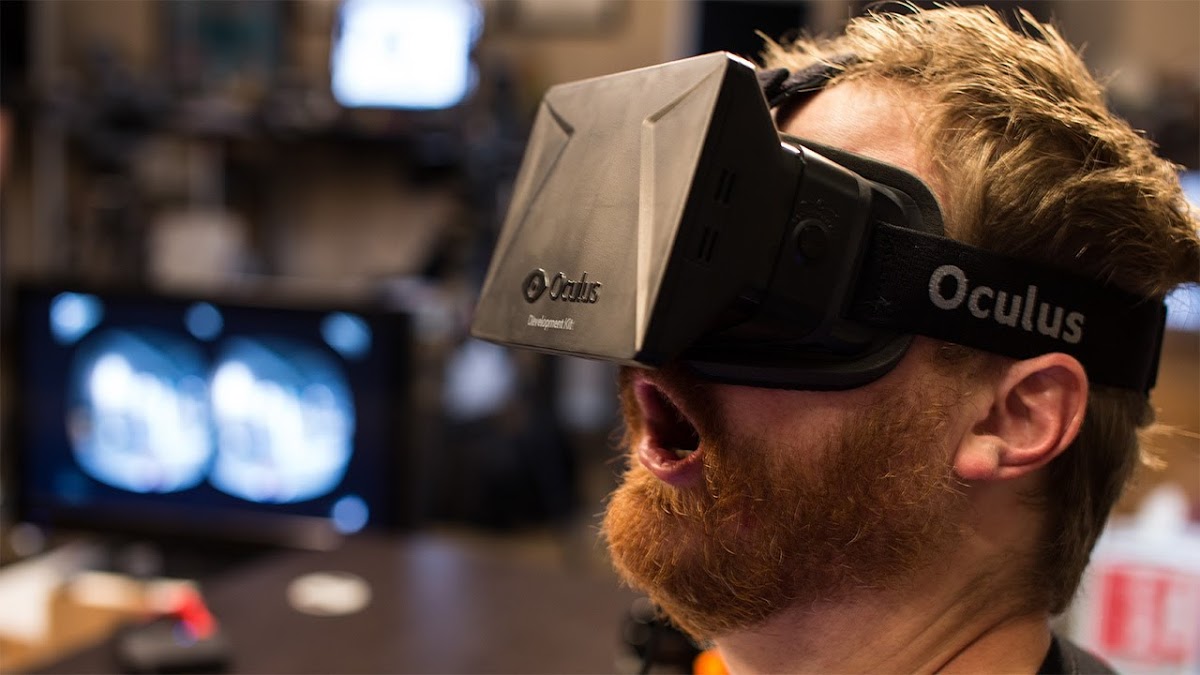 Sorry, Will Smith. (For reference, the image is from here http://www.tested.com/, and you should try visiting that website ;) )

I've now had it for two weeks, and I've messed around with it in most of the breaks I had, so I thought I'd share some of the experiences. Spoiler: It's fucking cool.

Immediately when I got it, I set it up, downloaded the SDK as instructed, and opened their demo. The desk one you've probably already seen by now if you have had any prior exposure to an Oculus. Then I opened their Tuscany demo, which is probably even more well-known.

AND BOY did it lag! I moved my head a little and I almost swam in jittering lag as it tried to catch up with my head movement. Even so, it was still neat enough that I spent a while walking around, but then I started what I already knew I was in for with this thing: I went to Google.

And I found out that this particular type of lag is called "judder", because it's not really typical lag, but more of a refresh problem. That helped a little, made the search easier. It seemed to have something to do with the frame rate not displaying correctly inside the Oculus. Apparently, the Oculus runs best at 75 Hz (which is an odd number for frame rates, but sure), and this judder happened when the Oculus did not actually run at that frame rate. It might be a problem with the game. It might be a problem with my monitor (or that I have two plugged in). It might be a problem with running it in Direct Mode versus in Extended Mode. Hmm, I said, and tried a few things. I disabled my second screen and whoosh! Judder was a lot better. Now it ran smoothly. Neat!

But, that was just their pre-made demo. When I started opening the door to the wilds that are tech demos, things got less predictable.

First, there was the swathe of demos that only worked for DK1 (the old Oculus). That was fair. It sucked, sure, but some of them were perhaps not really worthy of an update anyway. Second, there were the demos that worked… kinda; It couldn't figure out how to display in the Oculus properly. Or the motion tracking didn't work (seriously, it's bloody jarring to move your head but everything stays the same).

But eventually I found a few that worked.

Then I found a few that were cool.

Then I found a few that were amazing.

Unpossible was my first winner. A simple endless runner type game on a tube that you rotate around with the arrow keys, avoiding obstacles on the path. And sure, while that doesn't necessarily need the Oculus to work as a concept, it felt really cool with it. The sense of speed was more effective, the feeling of impact when you hit an obstacle is a lot stronger when the obstacle actually seems like it is right in front of your face (the Stereoscopic 3D is the best least reported feature of the Oculus).

But Sightline: The Chair, my next demo, is perhaps still my favorite one of them all. It's barely a game, and yet it is probably the most effective teaser at selling the Oculus as a device I've seen so far. 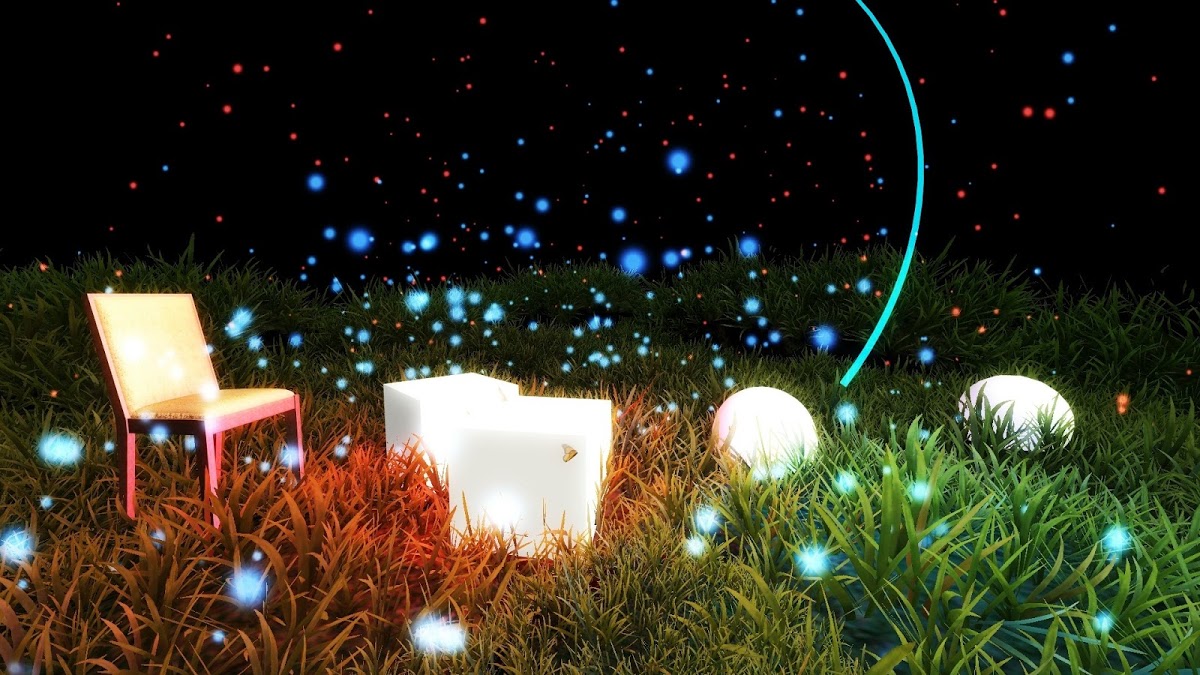 You sit in a chair and look around, and that's it.

It's really simple, really well executed, and a damn cool experience. Some of the things that happen later (which I won't spoil) are constantly more surprising than the previous, tricking you in some neat, subversive ways. 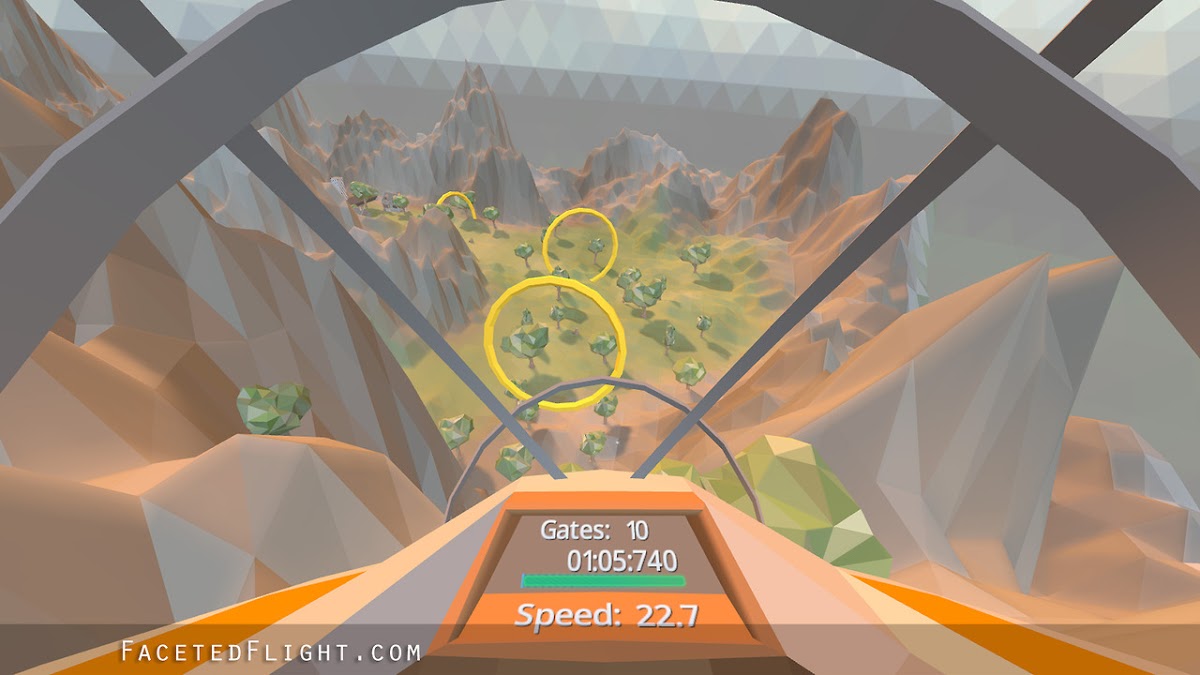 The final free demo I'll mention is Faceted Flight. It's a light flight simulator (well, simulator might be a stretch), where you fly around in a tiny, polygony world, trying to get through as many rings as possible. Game-wise it's nothing special, I'm only mentioning it because it was the first experience I had with flying with the Oculus – which is gosh-darned amazing. Sitting in a cockpit feels like what that thing was made for. The complete free movement makes you dizzy at times, almost as it would if you were doing it in real life (which is sort of amazing a game can recreate that). While I don't get motion-sick the way others do from using the Oculus, this was the only game where I felt a little queasy while playing, because it actually managed to make me feel like I was swerving around in the air.


Then I went on to trying some quote-on-quote "real" games.

There aren't many of them yet, unfortunately, and those there are haven't really been made with the Oculus in mind from the beginning, but they are still experiences worth trying.

First were Half Life 2 and Team Fortress 2. Both Valve games, which got Oculus support fairly early, and they luckily have updated to the DK2.

Playing Half Life like that is the best way to play that game. It is absolutely, genuinely cool, even on that 'old' game. If that game had come out now, it would seem tailored for the Oculus.

And TF2? It's frantic, occasionally barely legible because it is all happening so fast and so close, but in some ways that makes it more fascinating to me. You could never play this way in any serious manner, but casually it feels amazing. The speed and the ability peer around you while aiming the other way gives the game an engaging twist for someone who has already spent a lot of time in TF2.

(Although sniping is now virtually impossible because you move around the black space of the scope, which is a bit disappointing. That's something that will definitely need to be thought upon if this should ever be a real thing, since it applies to other scopes as well).

On the topic of Valve, it's fascinating to see what they did too, because their controls are interesting compared to many others. Also, they provide options about how you want to control. Do you want to control the reticule of the gun with the Oculus? Or have complete free movement with the head and the gun only being mouse controlled? This, and a bunch of different granular changes in between was interesting to play around with. For reference, I found the version with free view control within a boundary to be the best one for me. 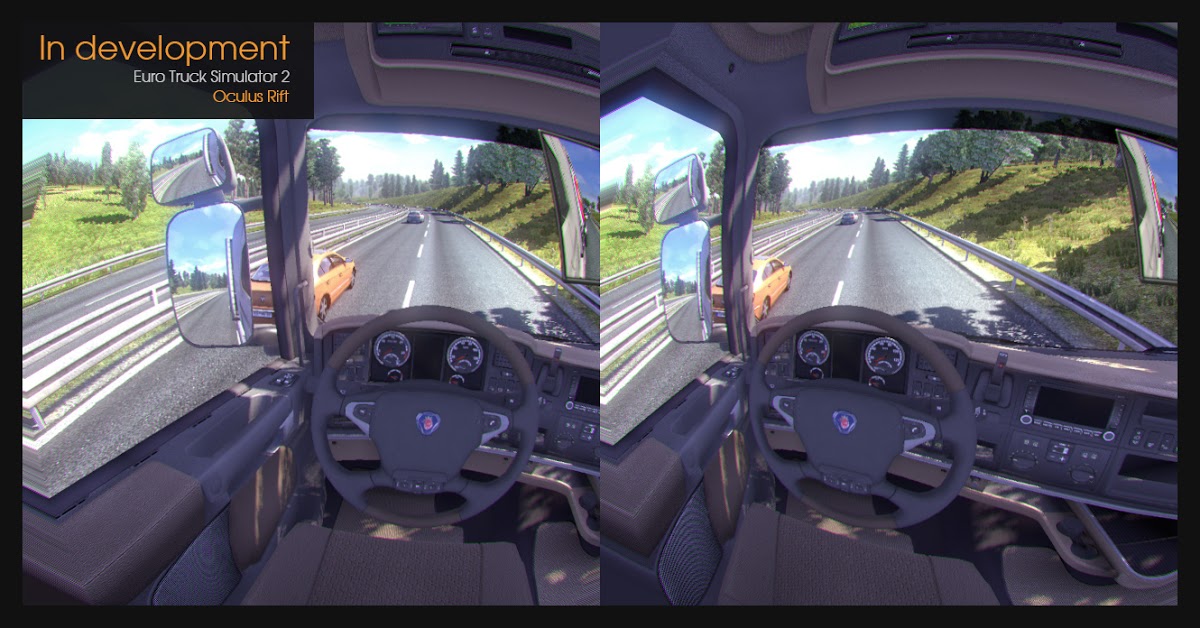 Finally, I also want to mention Euro Truck Simulator 2. Coincidentally, it was on sale on humble just as I got my Oculus, so I couldn't resist at least trying it out for 5 euros.

And it's fantastic in all the predictable ways. Driving a truck works way better when you feel that much closer to driving in a truck. And being able to seeing behind you by literally twisting and looking back out the window makes it feel way better.


That was a lot of positivity, wasn't it? Sure, the Oculus it pretty cool. But I still would say that you should only get this if you either have a lot of extra money to spend AND a knowledge of how to tinker with computers – because you will need to tinker with it to get it to work – or because you are sure you want to develop for it. (And with their newly announced prototype, we might start getting closer to an actual consumer version).

I do want to develop for it, that was why I got it, but it might not be right now, because I've got two big projects going on already along with normal university work, so I don't have a lot of time on my hands… But I might still start messing with it in Unity at some point. I hope.