[One game, one hour, every Sunday]


Axiom Verge is an homage to the old Super Metroid for the SNES, and the many other “Metroidvania”’s in the world on the older consoles, none of which I have ever played. I hold no nostalgia to that time because I wasn’t even alive then—and when I was I have always been a PC gamer, so console games usually went right by my head. Thus, this is a genre I don’t have a lot of experience with. Yet, I find it fascinating and I’ve heard many good things about Axiom Verge, so I delved in.

This is starting two hours into the experience, as I’ve played it before today.

I wake up, a cybertech egg construction rises up and reveals me inside it. That’s where I always wake up, in an egg, ready to hatch. When I die, I return to the egg, hatching again, no explanation as to why. Little explanation at all for why I am there. Something went wrong, I’m a scientist and the building I was in exploded. That’s what I remember. And now I find myself here, stranded underground with strange beings and androids or synthetic mixes of the two all wanting to kill me. 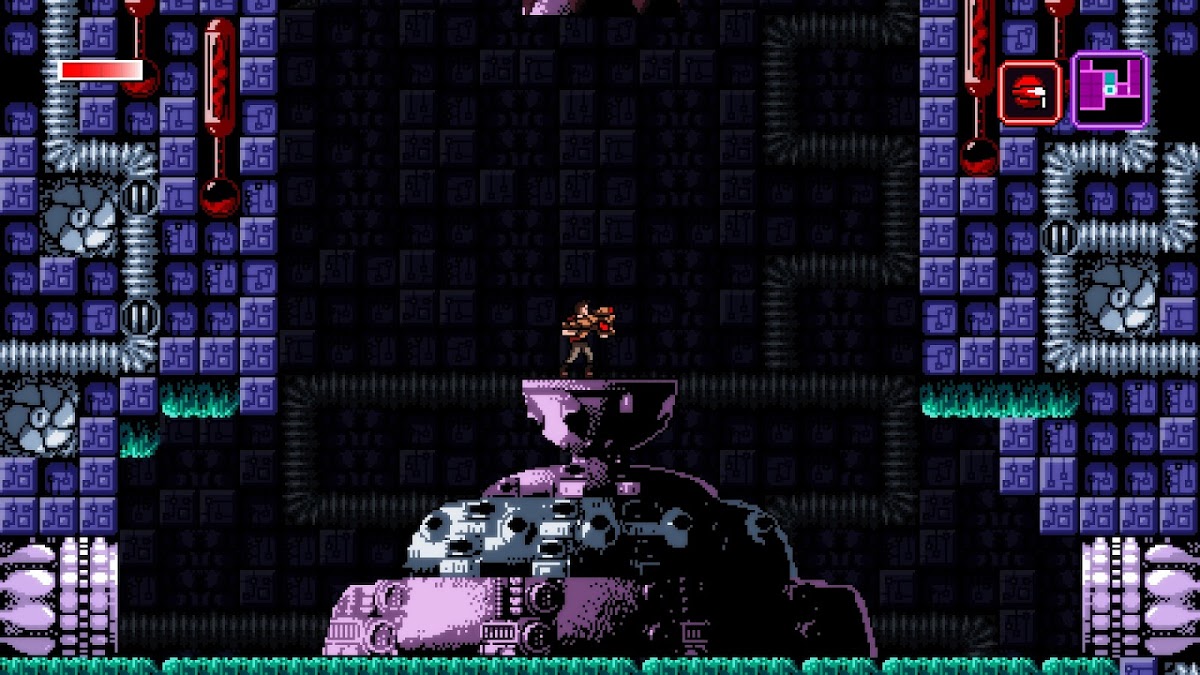 The top of the egg has retracted to the top, you can juust see the edge of it. You just gotta trust me: It's an egg.

As I wake up and begin running around, droning retro-synths and looming piano builds up in the background, I immediately remember why I stopped playing last time: I was lost. I didn’t know where to go next. I had just defeated a giant worm-robot-like-thing and now I had no idea where to go from there.

So, with an hour ahead of me I strap in and begin exploring.

The worst part is I’ve already been to most of this place. I’m in a region the game exclaims is called “Zi”, a place full of sandworms, fungus-like things that shoot out projectiles to all sides and jumping octopuses. It’s not a nice place, but I doubt any place down here is. And even though I defeated the boss there, I get out as quick as I can, running through what I have already dubbed as the “Bad Hallway” and getting to the other region of “Kur”. 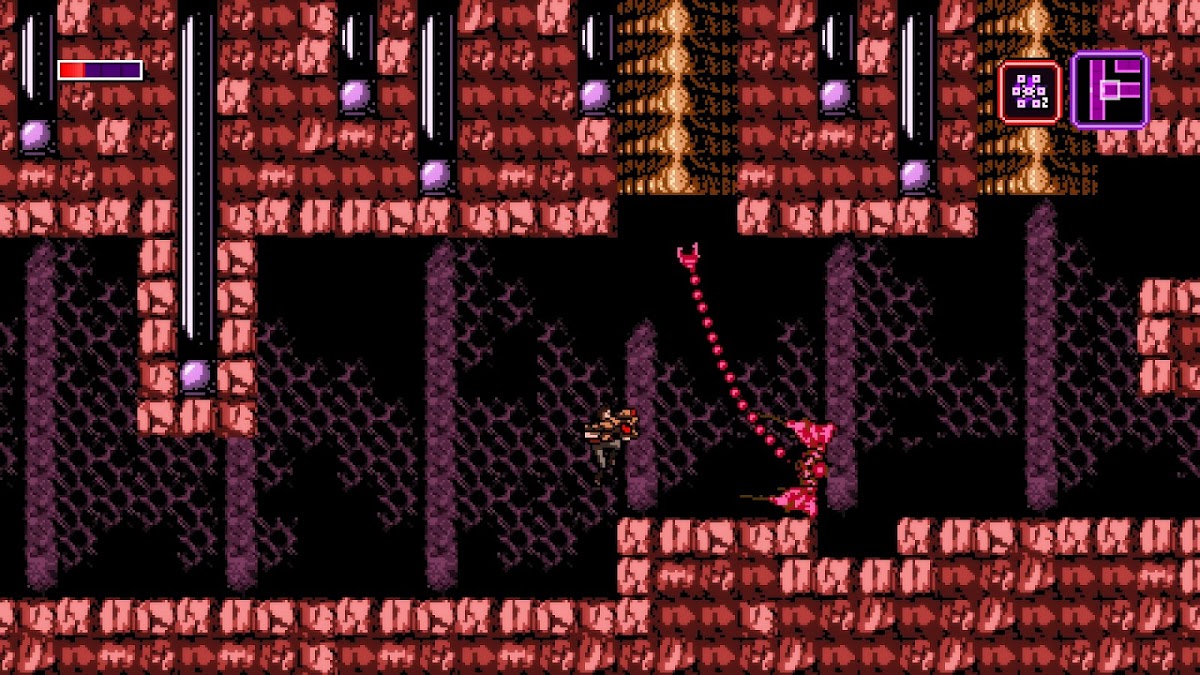 This is the Bad Hallway. I have already been through this too many times. And that red long thing's a Sandworm, by the way.

Oh right. Now I remember this place too: Laser Bastards. Small, innocuous things that roam around their little platforms. But don’t get tricked by their neat appearance: They’ll mess with you if they spot you, shooting out a giant laser that’ll hit you before you know it. New music kicks in, heavily processed, glitchy synth vocals haunt me as I traverse up the long corridor of Laser Bastards until I reach the top. I go right and find some aggressive, giant flies that fortunately aren’t so hard to dispose of, but then I reach a dead end. Nowhere to progress, no abilities in my arsenal that’ll allow me to get through laser walls, or regular walls, or jump up places I can’t reach yet. 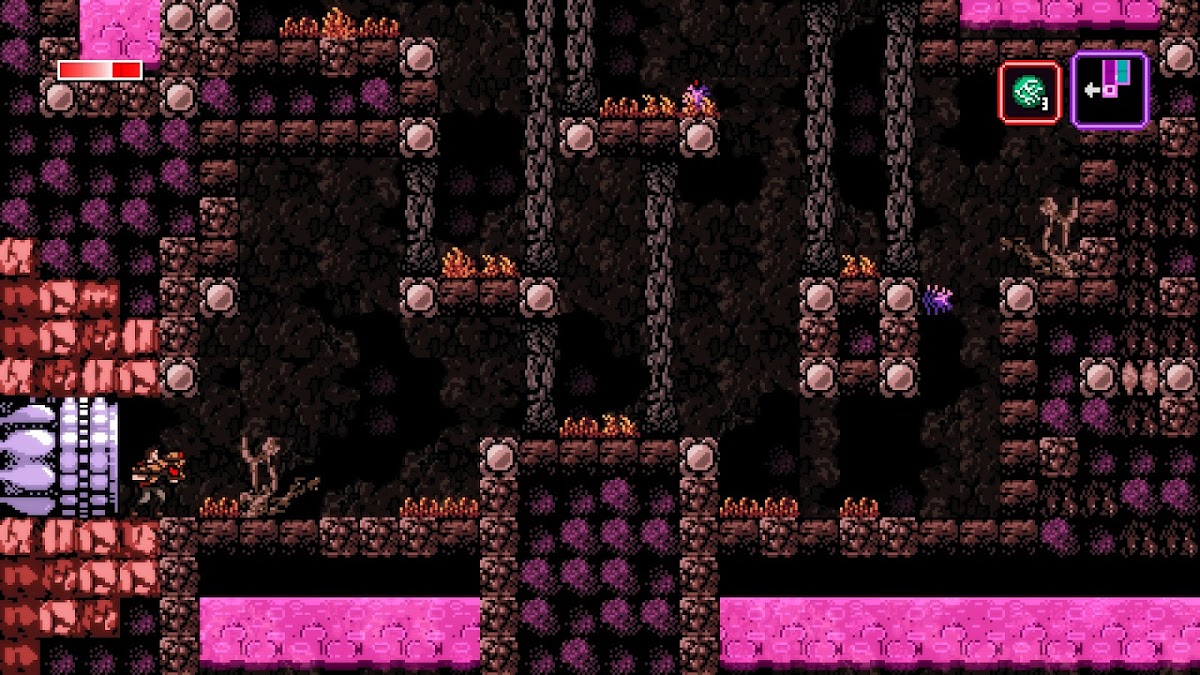 Those tiny purple furballs: Those are Laser Bastards.

A dead end. There was nothing for me at Kur. Dammit.


I traverse back and roam around for a long time until I find my way back in to the old boss chamber in Zi again.

And lo and behold, I was blind the last time I was here. I knew there was a transporting pipe all the way to the right of the room, but I thought I couldn’t reach it. Turns out I had to use my glitch-beam-gun-thingy (I’m really butchering these names. Sorry!) to reveal some hidden platforms that I could jump across. This was, in hindsight, rather obvious, I just hadn’t been rigorous enough in my attempts to look for this last time. 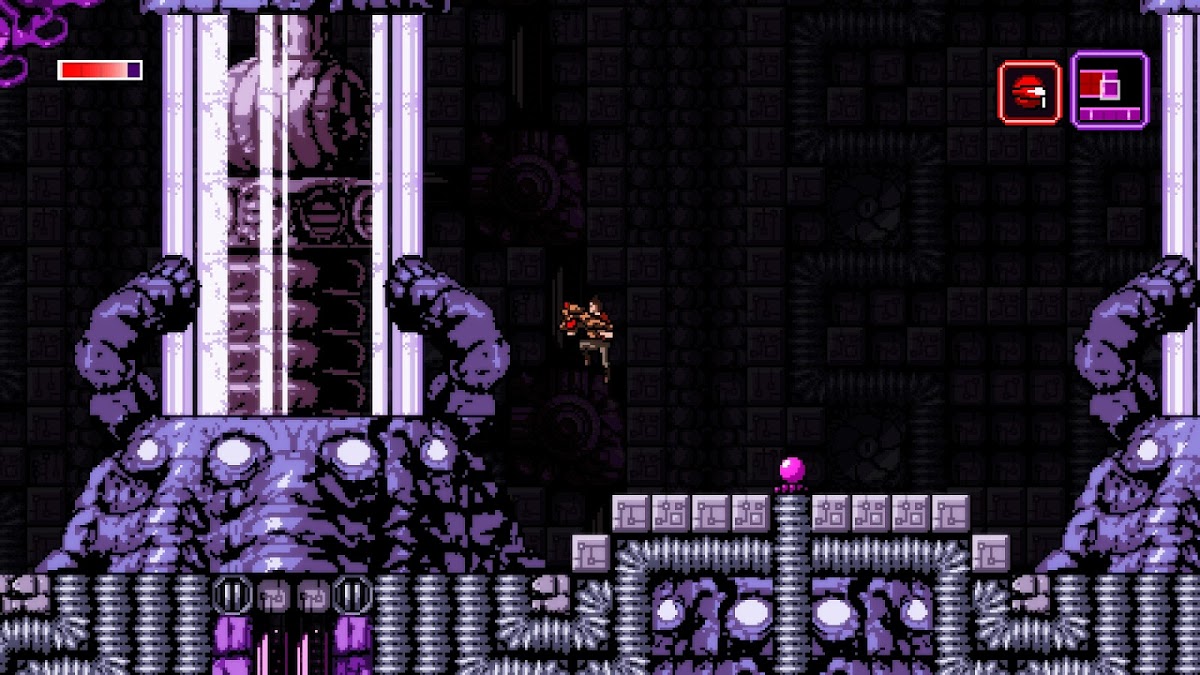 To the left: Brain in tube. To the right: Switch to be flipped.

I go in and find something that disturbingly looks like a giant brain in a tube and activate a switch. My robot companion lights up and tells me I did indeed find the Power Filter Switch I was looking for, so that’s good news. She talks to me in pseudo-broken English about the history of this place, and I get a better sense for why I’m there and what my next goal is. But I’ll let you discover that yourself.

The important part (!) is that I got this sick coat that literally allows me to “walk” through walls (That is to say, I glitch through them in a rather cool way that looks intentionally broken. It’s pretty neat). With my newfound power I go back to Kur and go through walls, and discover a pipe that leads… Outside! Ah, fresh air. New music, strange star-hives hanging in the sky on wax-crystal-like threads. New opportunities, and I find myself, finally, a little less lost. 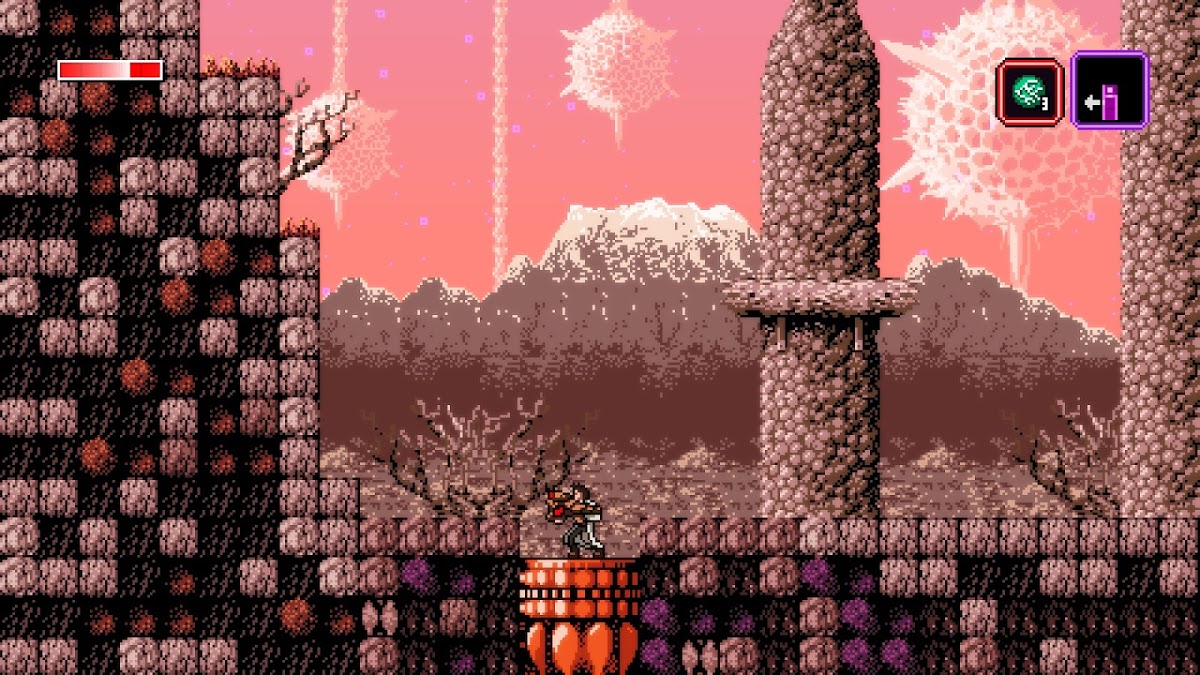 Let's do this. (Also look at my awesome labcoat)