Last time, we were introduced to Nutty Link, on a quest to return to his former self, by stealing a mask from a child and helping a bad salesman. Now, we need to find a piece of a fairy in order to talk to the Great Fairy.

The piece is somewhere in town. So time to hit the streets! 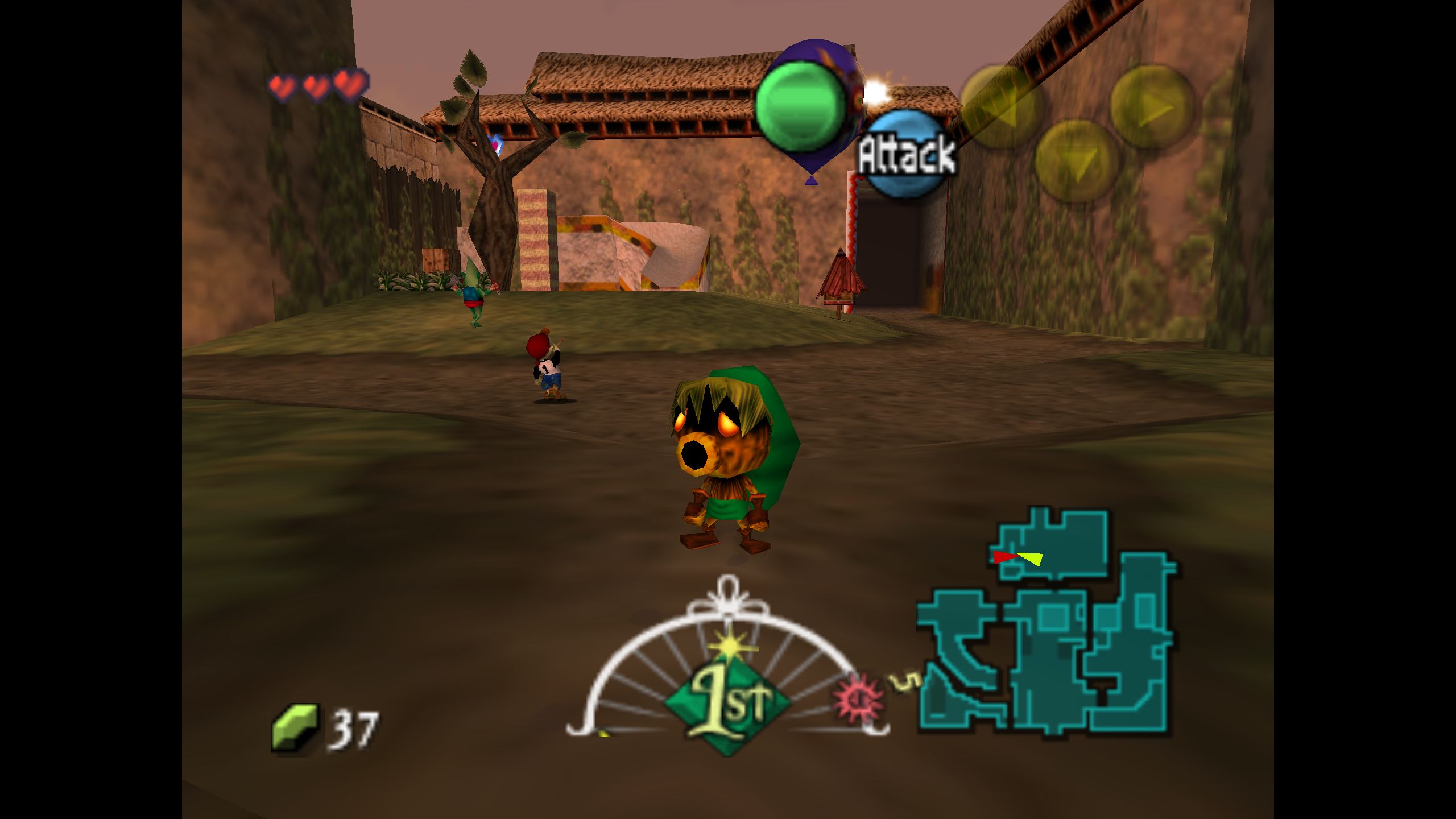 Ok, let's get a lay of the land: The town seems to have four parts. The south, where I came in, a north, where I am now, a west and another west. What, I didn't name them.

Let's check out the west first: There's some shops. 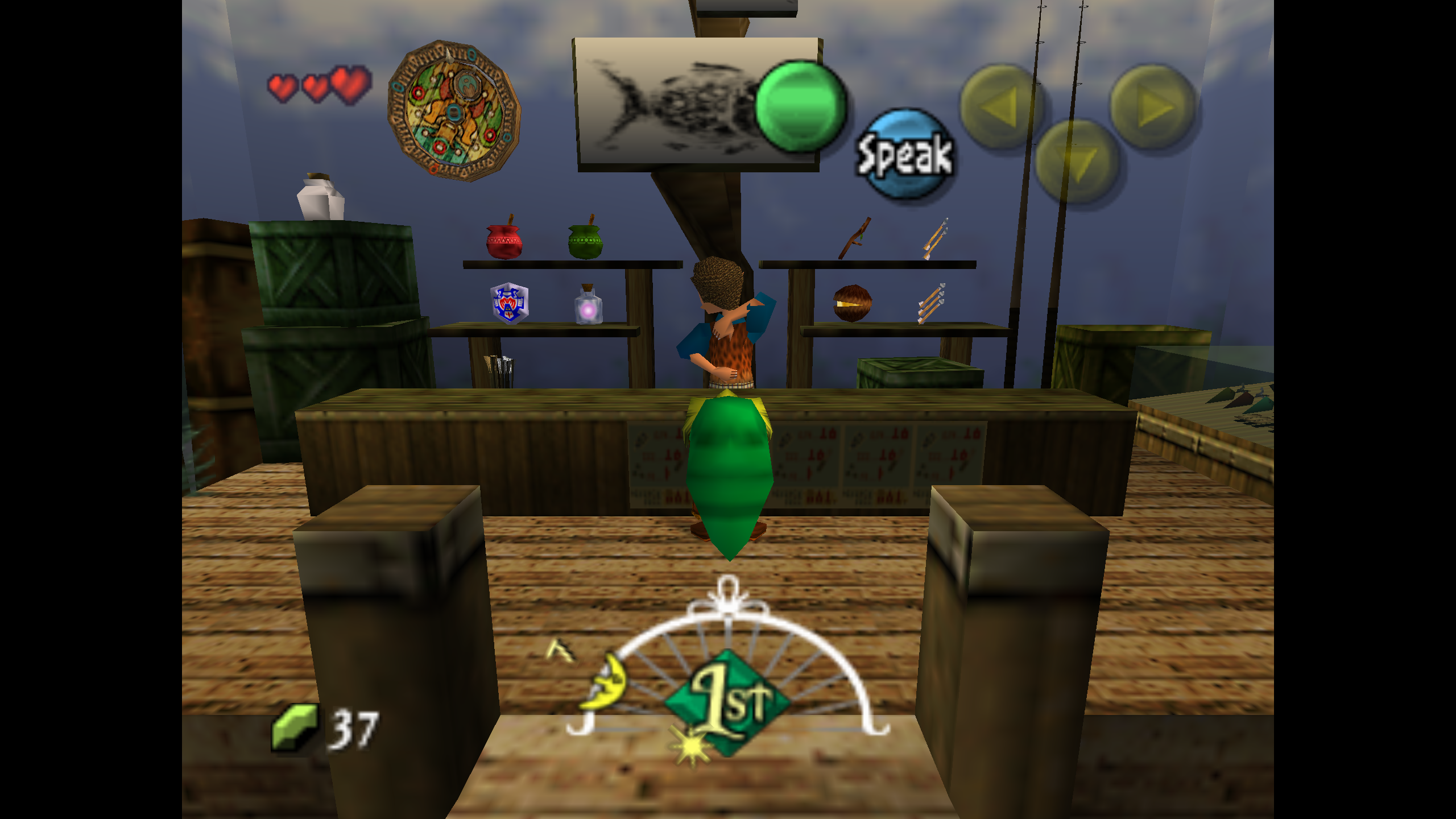 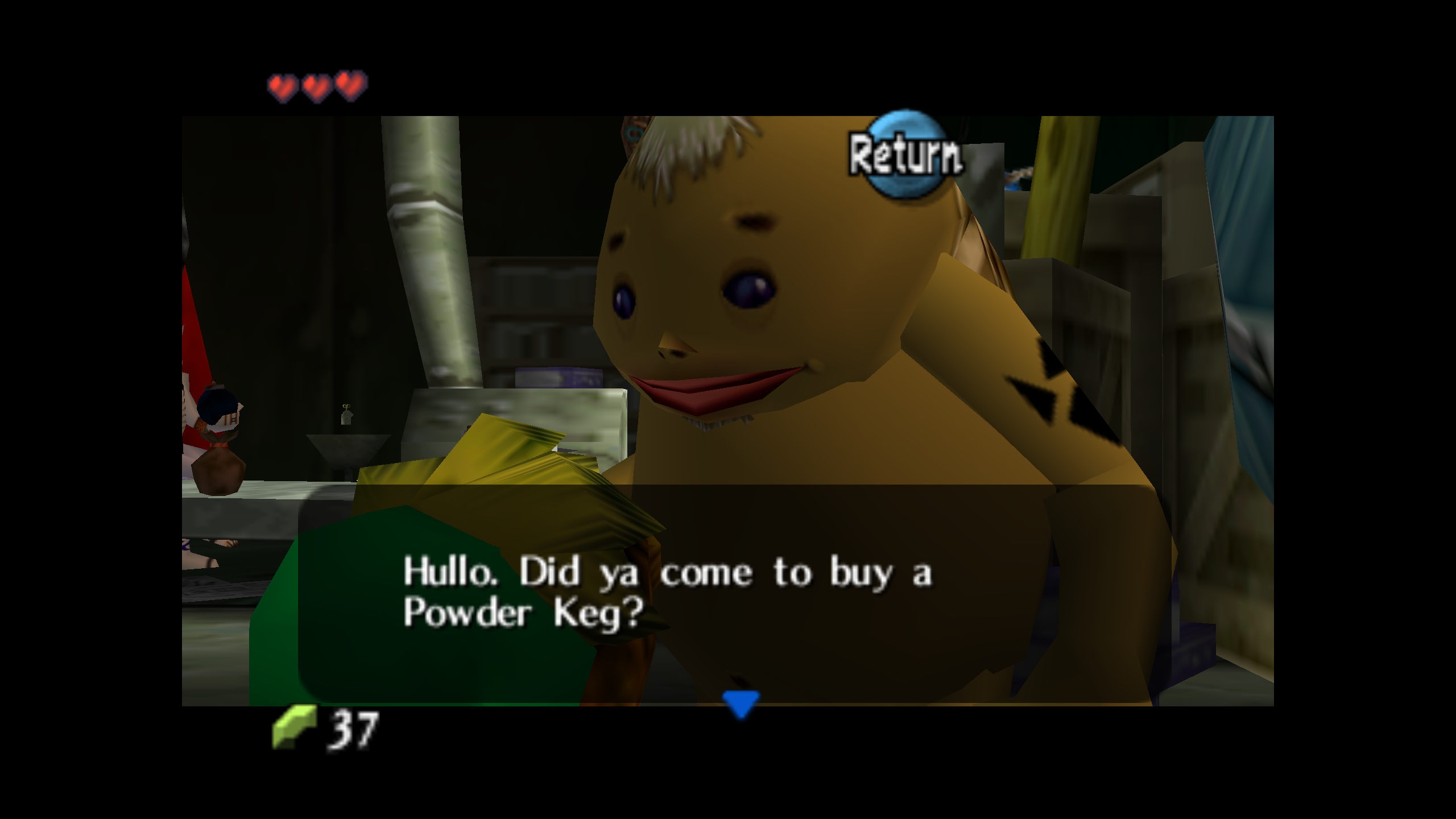 Of course I did! It's the first thing I need for my party tonight. 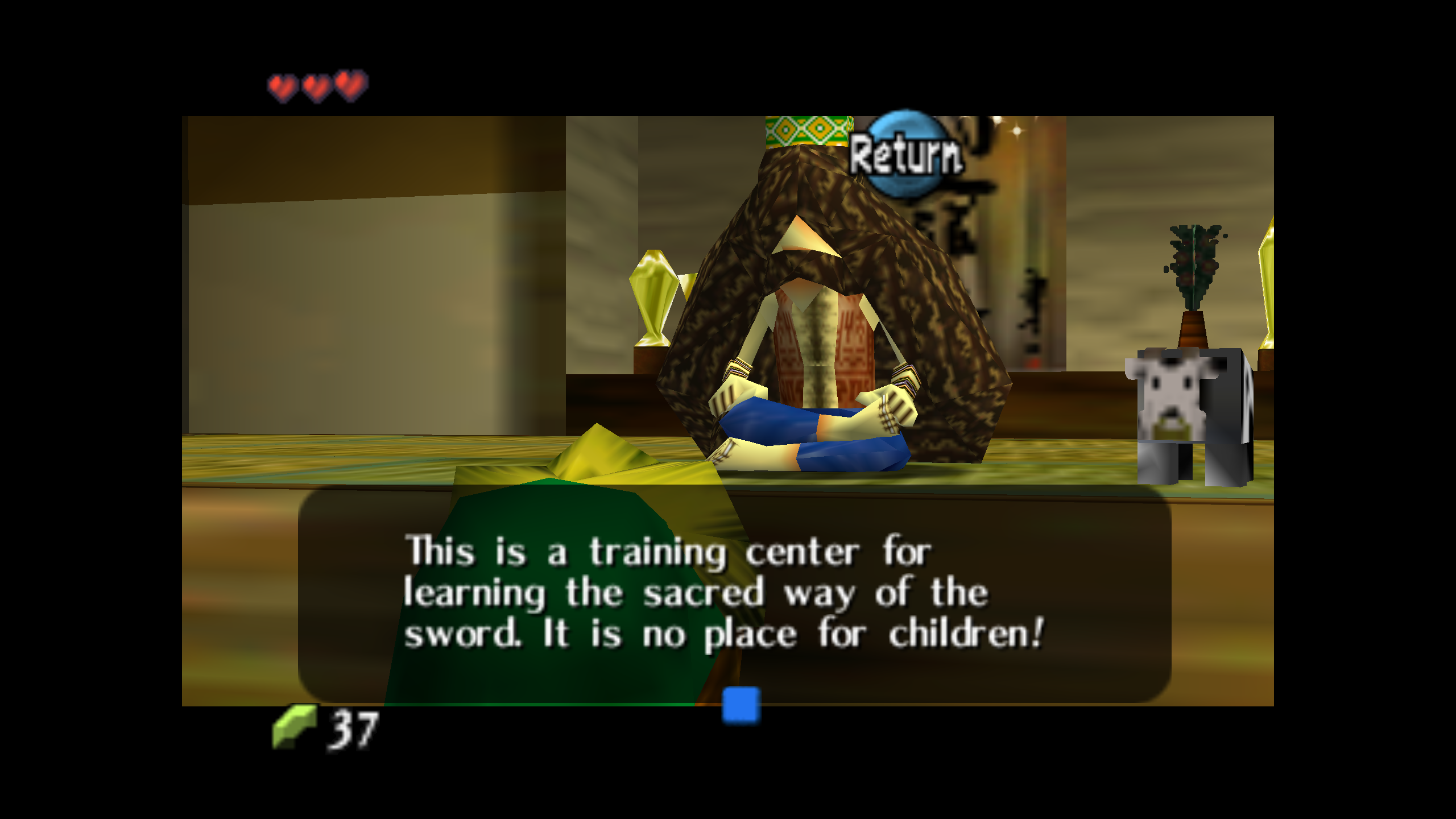 "hey, duude. I'm here to train ya. In swordmansshipsart. It's hella chill." 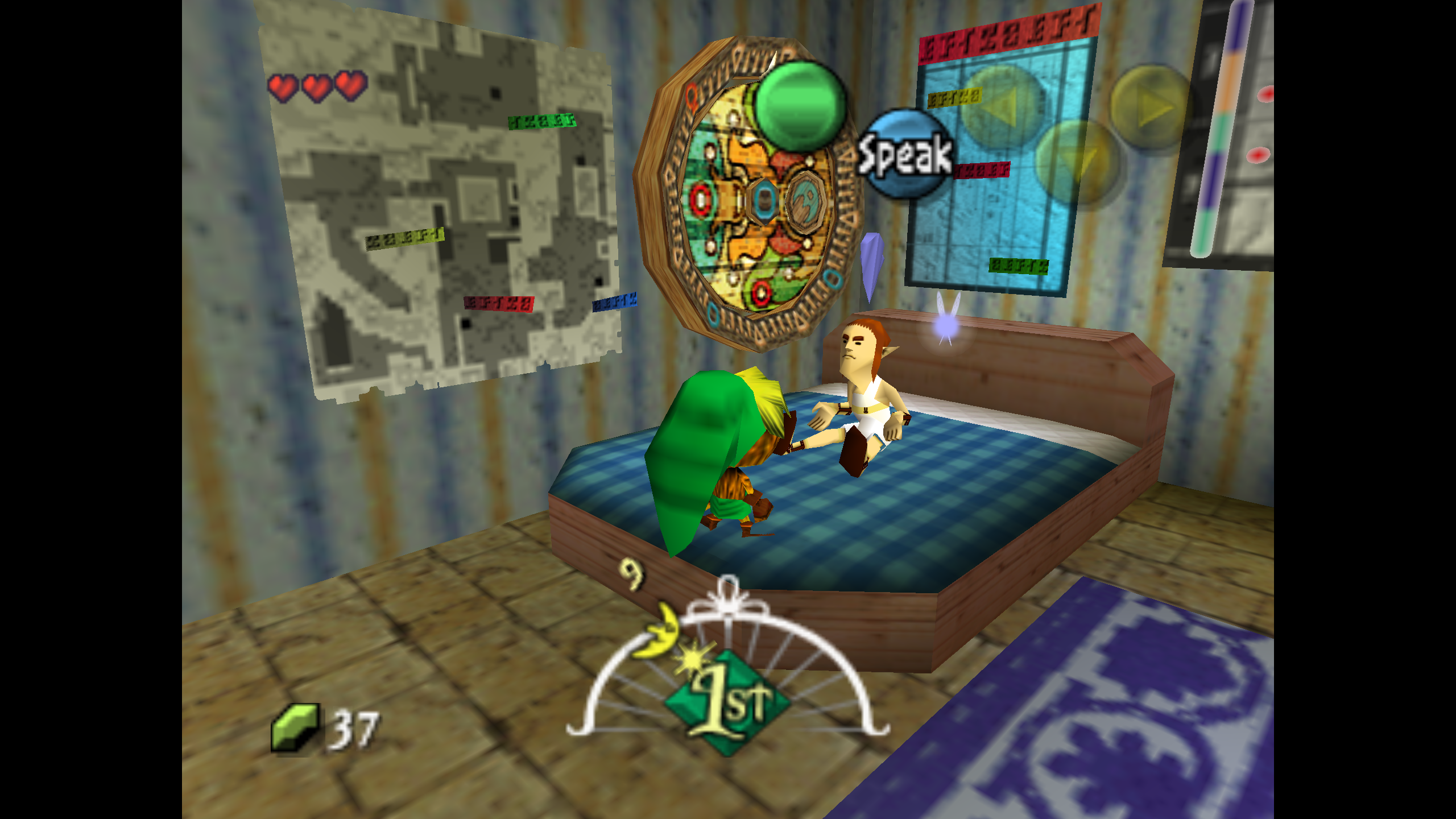 IT'S THE ONE AND ONLY.

IT IS OH MY GOD I FOUND HIM. The one and only! The Legend! Endurance Incarnate! My old friend, the Wandering Running Man! Let's Dance!

...But instead of the reunion I was expecting he was just complaining I interrupted his training. He's, apparently trying to hold his breath for exactly 10 seconds. And explains this is hard by letting me try (the reason it's hard is he's not allowed to know when 10 seconds has passed, so it's just a counting game). And he let's you try! I didn't succeed (I got 9:11, 10:54, and 10:69). So I gave up.

The reason he doesn't know me is obvious, though: I'm Nutty Link right now and not the kid he knows and loves. You'll see, when I'm back to my old self, we'll be right back in the old patterns. There'll be milk and cookies. And Blackjack.

There was also a

Other than the shops, there was a kid who told me about an old astronomer outside town they knew a secret passage to, and the guards who, clearly a still a threat.

They're even doing the goddamn Mido Shuffle on all the doorways to make sure I don't leave town. 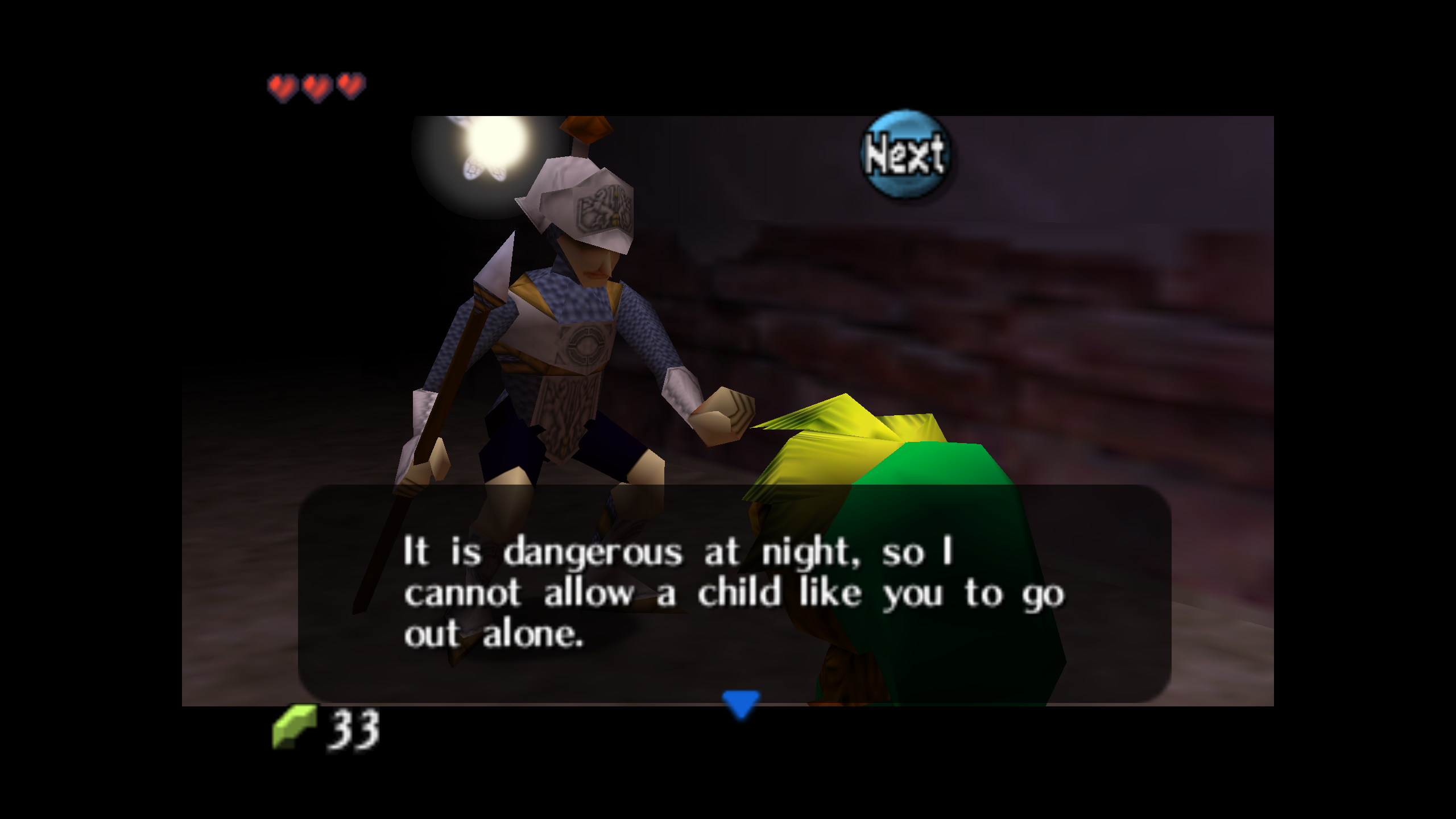 Well, how about you give me a sword then? That's what you're supposed to do when you say it's dangerous to go alone. 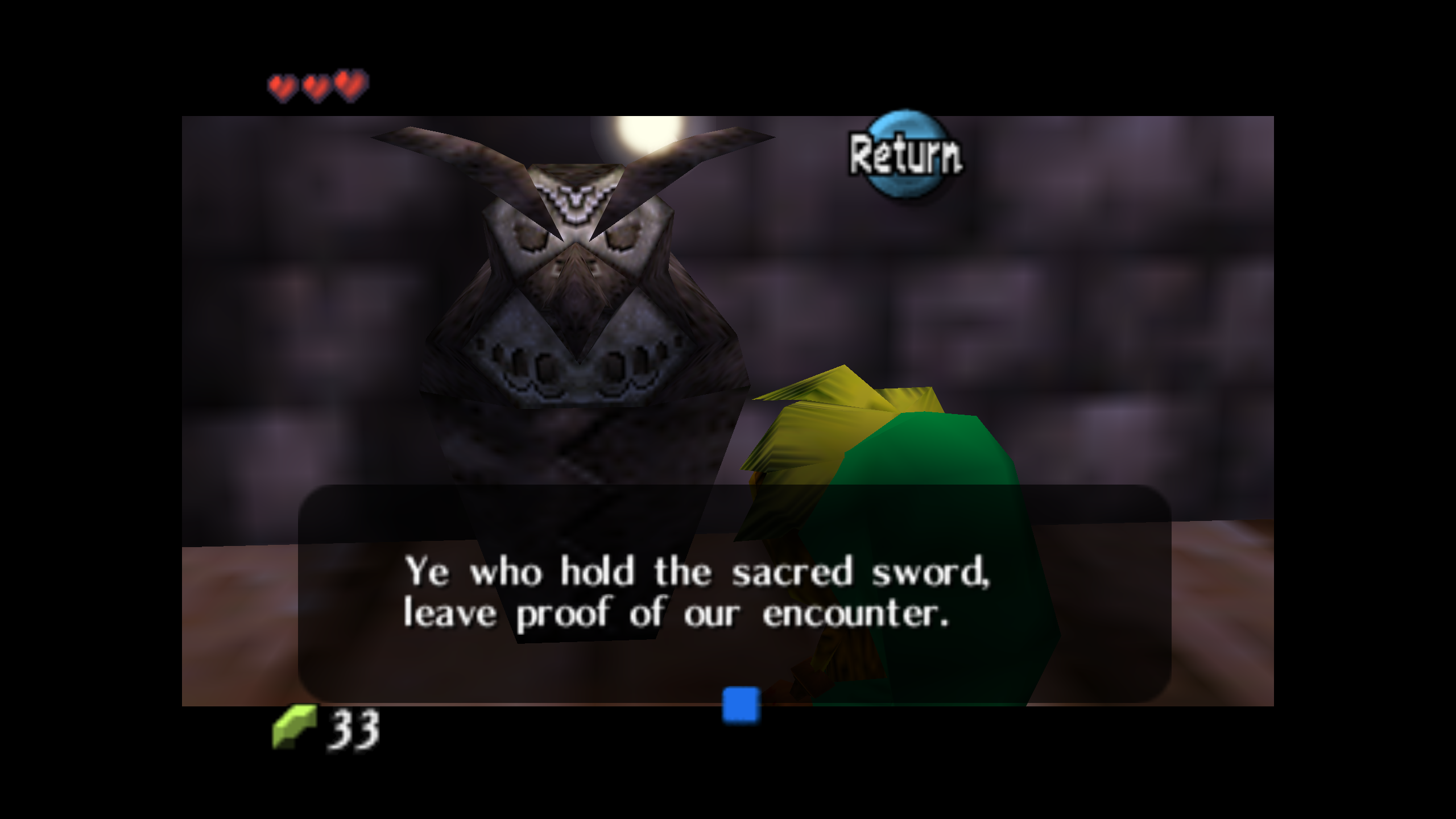 I run around a bit more and find a back-area with a musician who used to be in a mill and a shady business guy who runs away when I get close, but then 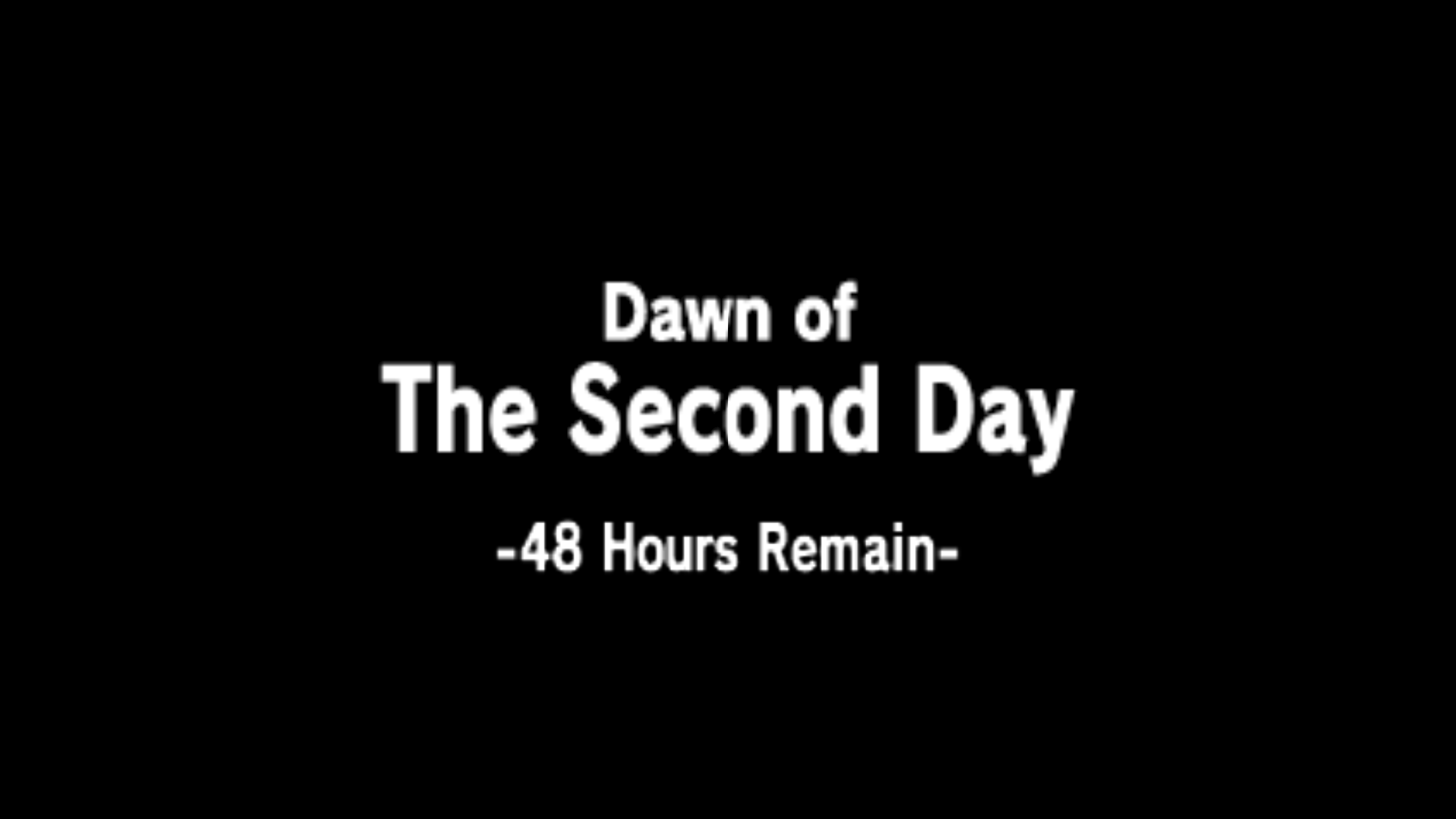 Boof. Right. We on a timer, friends. In case you forgot. This goes by quickly, doesn't it?

Time for the other west! Also known as East!

Before I got to the shops, I noticed the wandering running man running around in post-man-gear, to the different mailboxes and doing his job. Neat! 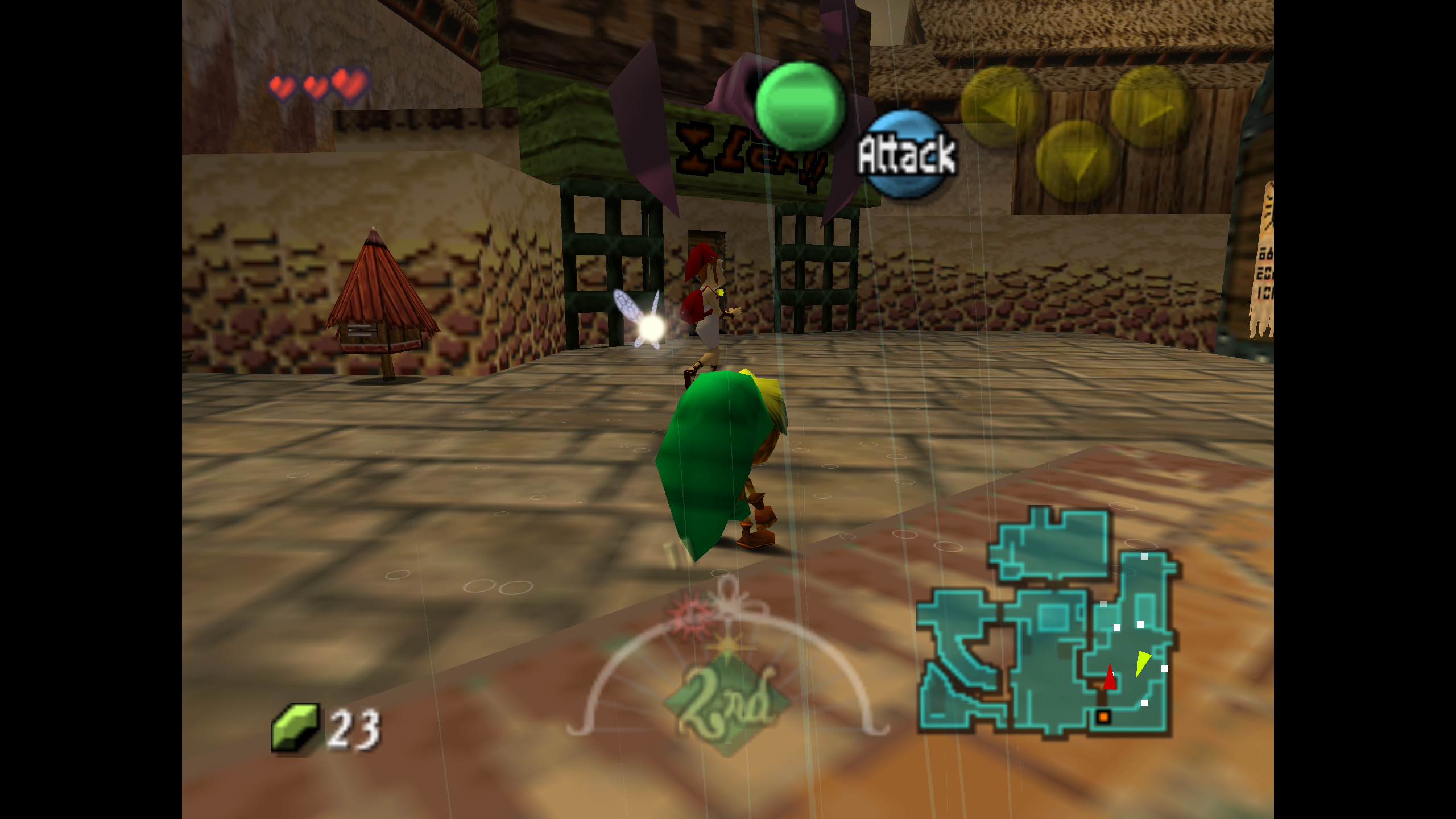 There he is! On the clock! Working the work! Ticking the box! Clocking the shift! I'm here for you when you're off duty, pal! Bring the Milk! 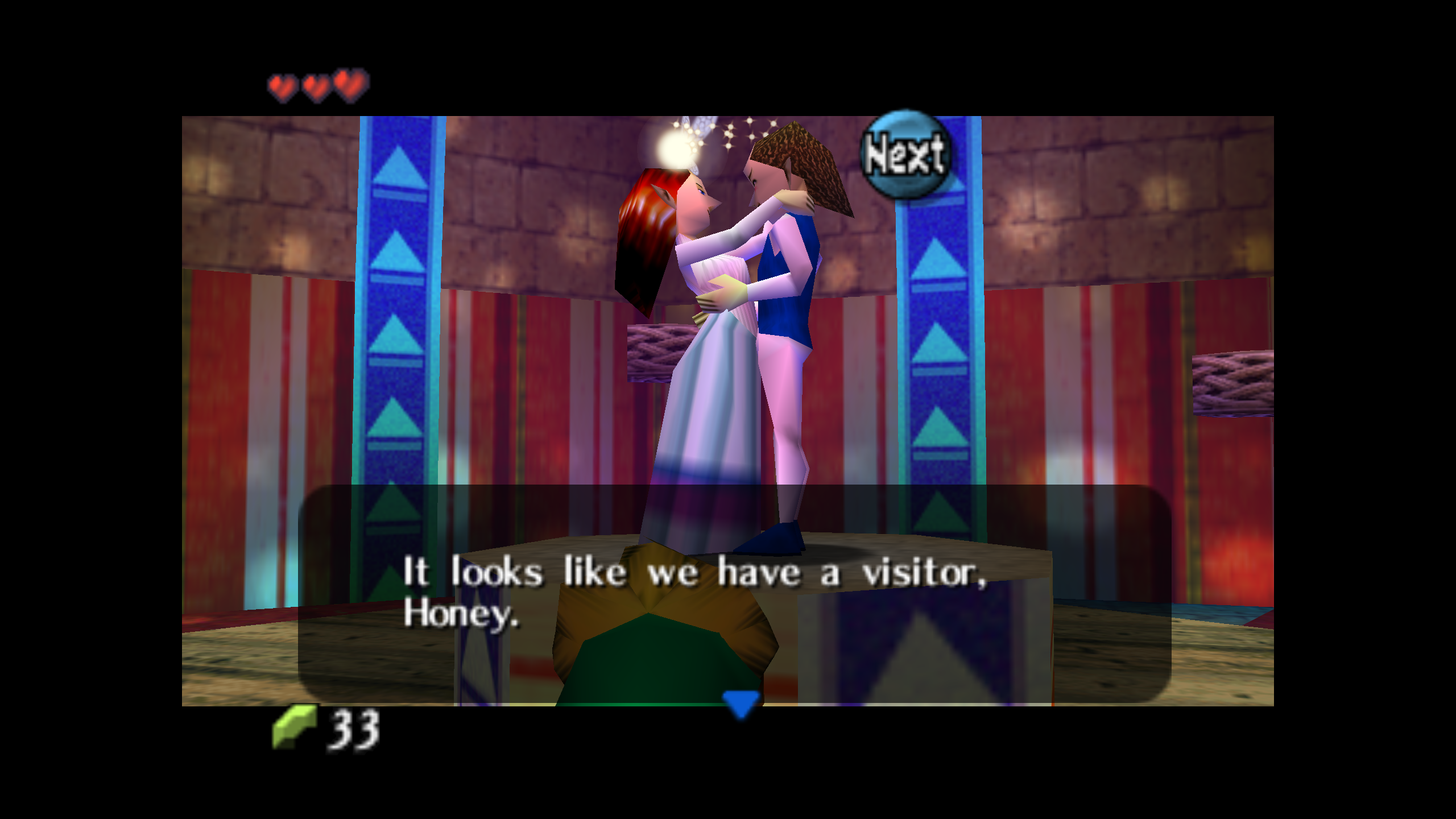 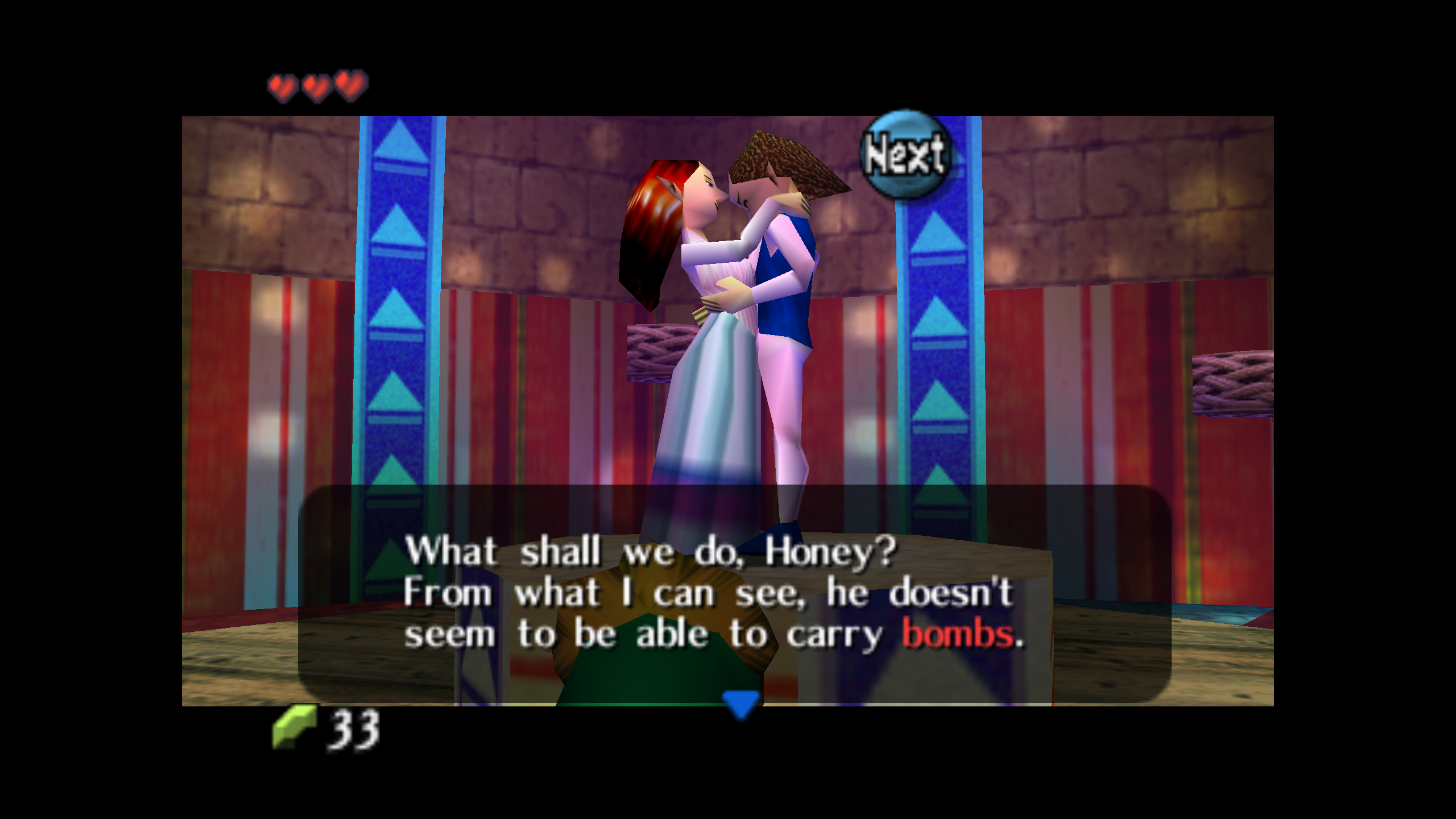 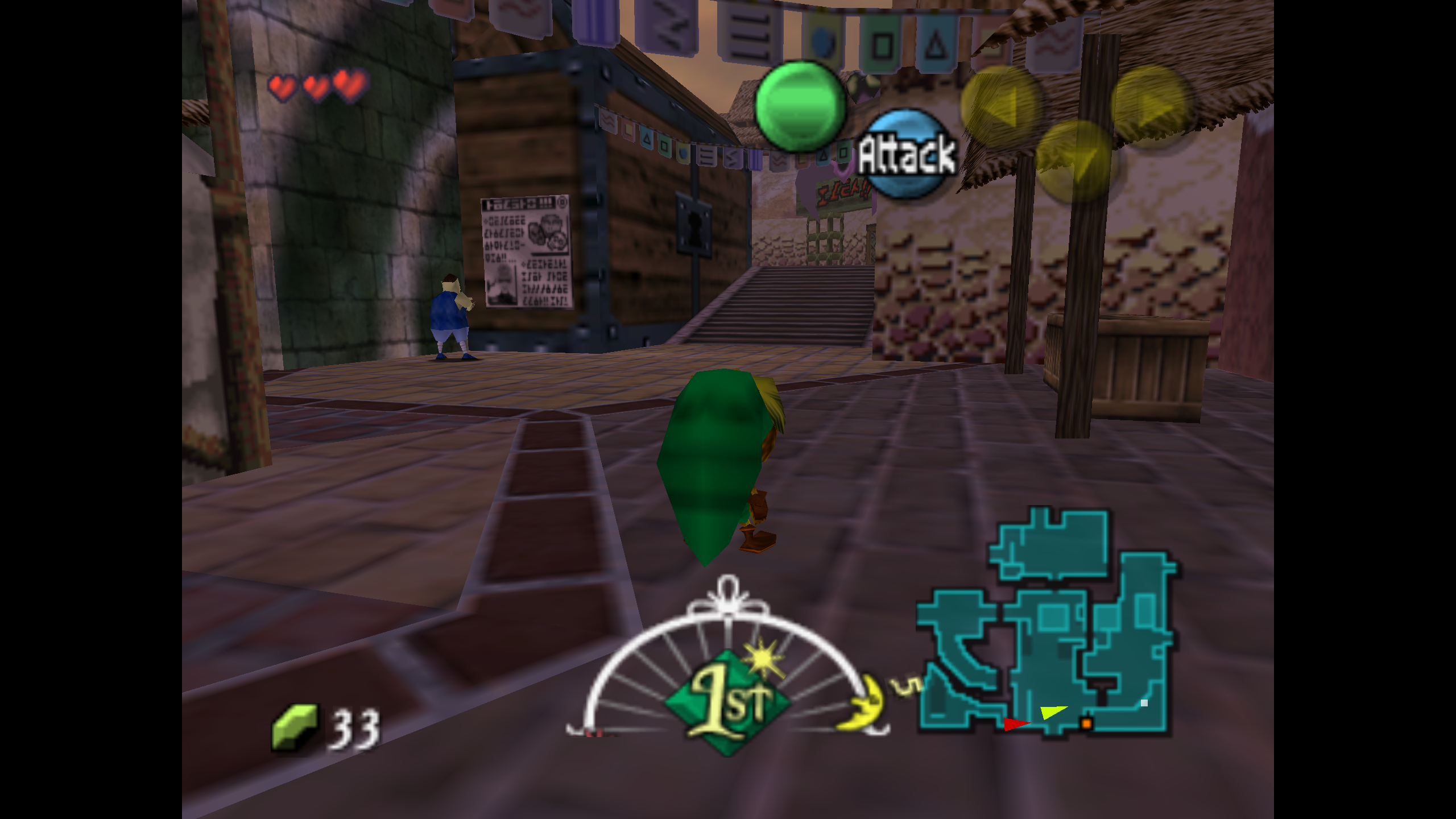 It's actually a treasure shop thingy, where you can pay 10 rupees to run through a maze to get a treasure. I did it on my first try, it was some nuts. Nuts. 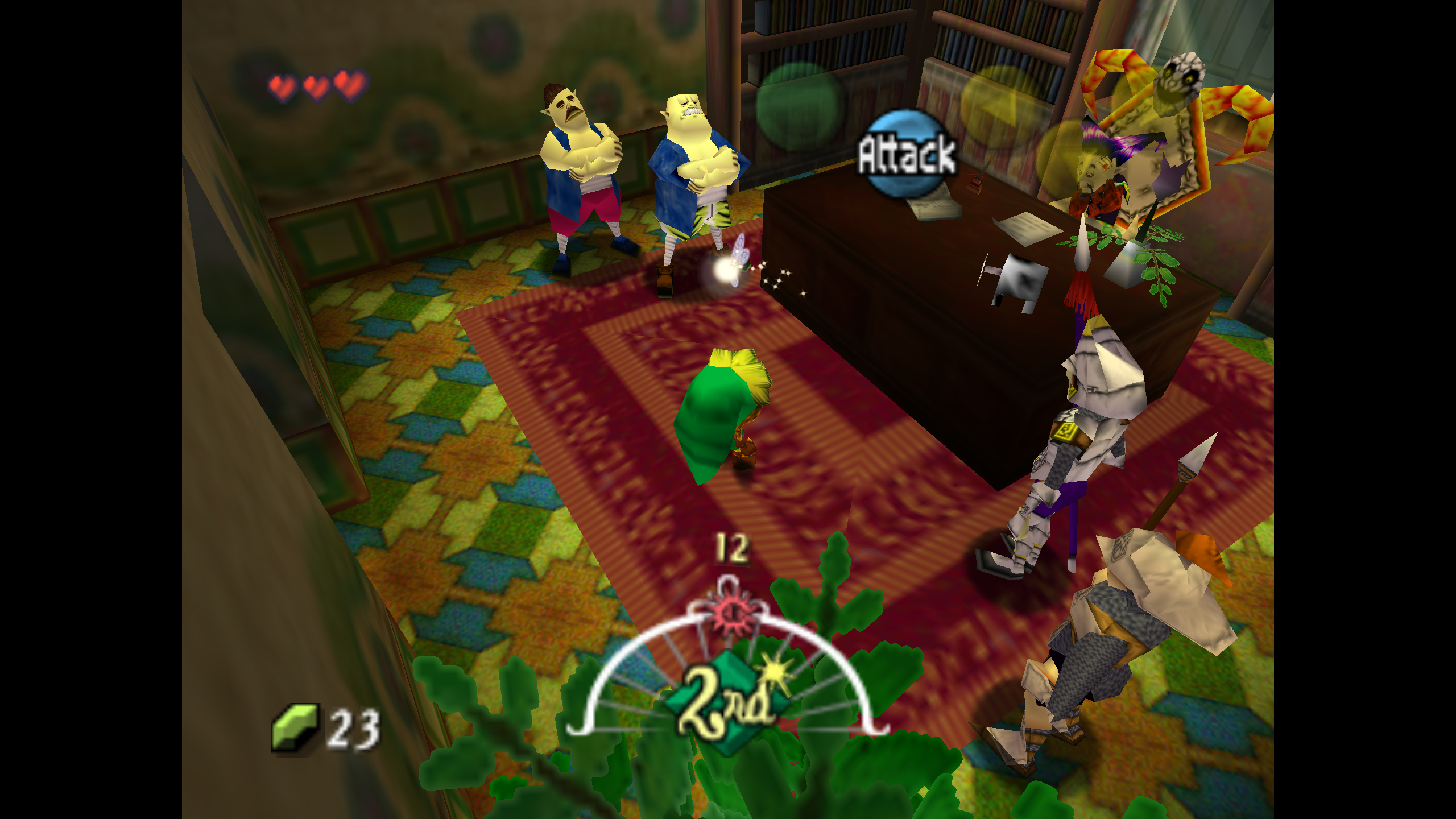 There I was. Turns out, there was guards on one side, arguing for the evacuation of town, but the builders on the other side? 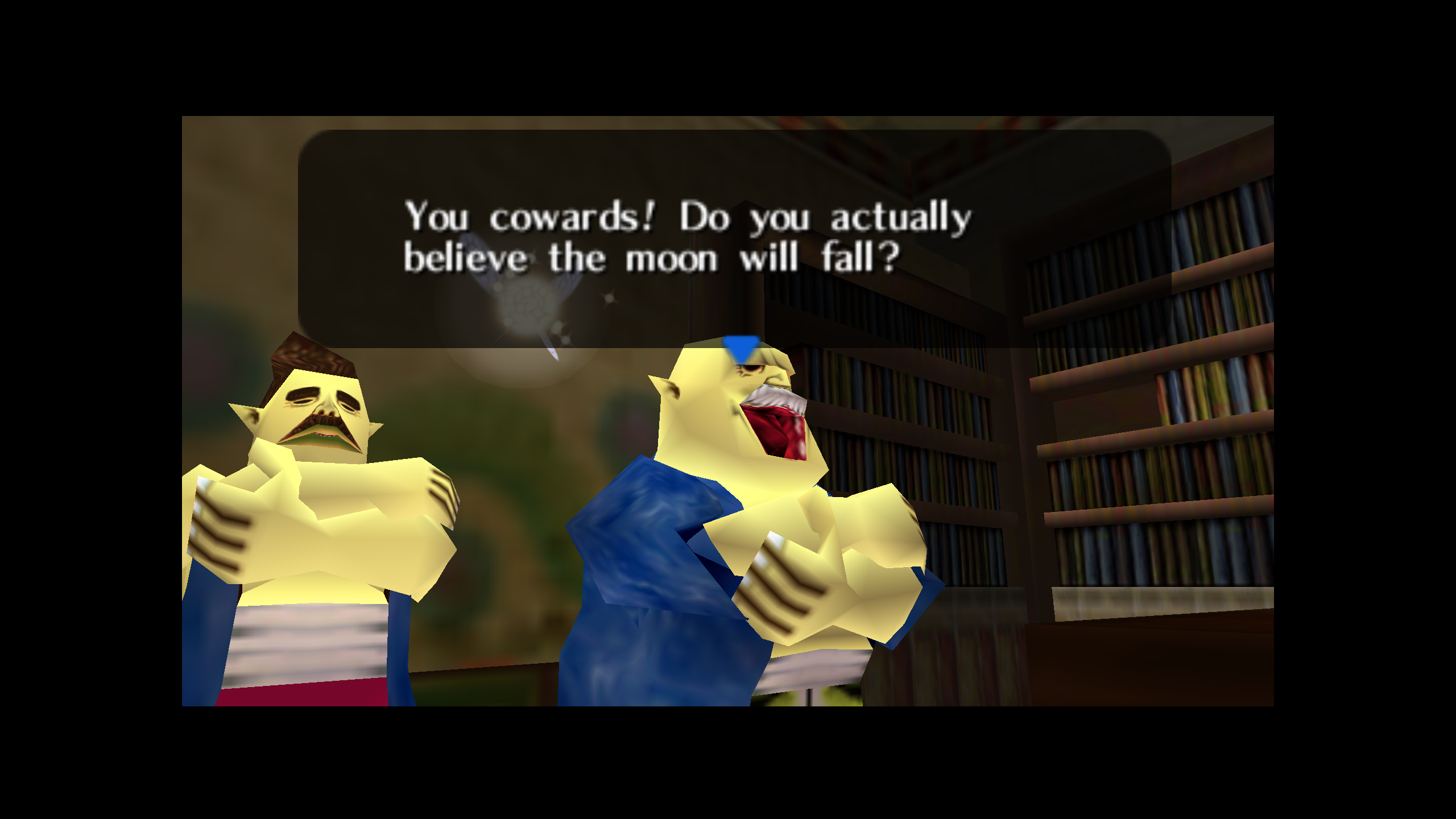 But the guards were all pretty sure they should evacuate the town, and the builders were all it's hodge-podge and bullshit and nothing will happen and we need business to go on and it all felt a little too real right now so I bailed.

Then I went outside and looked up. 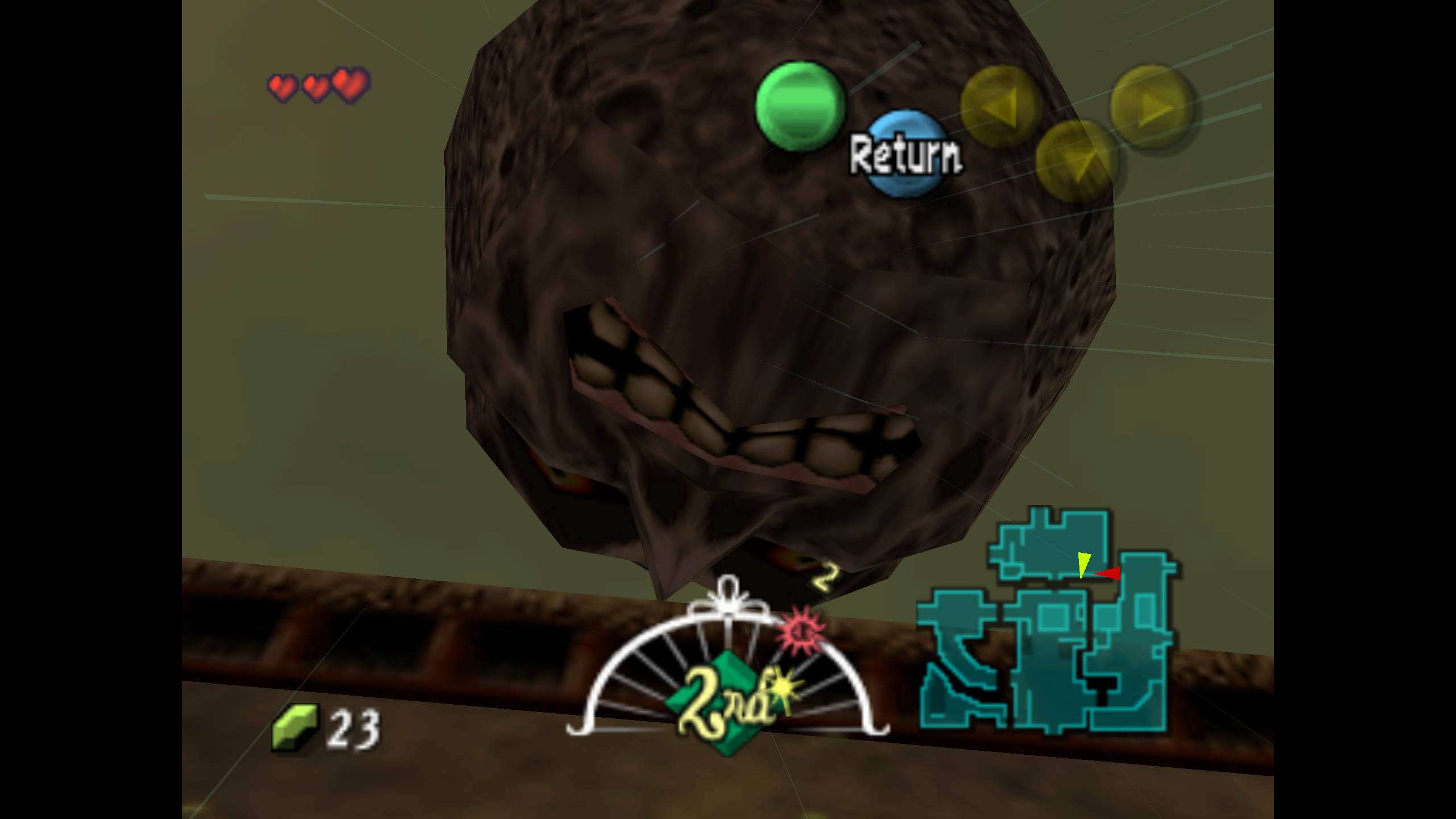 I see. The moon is... right there. Indeed. Maybe... I should evacuate.

What the hell, guards. 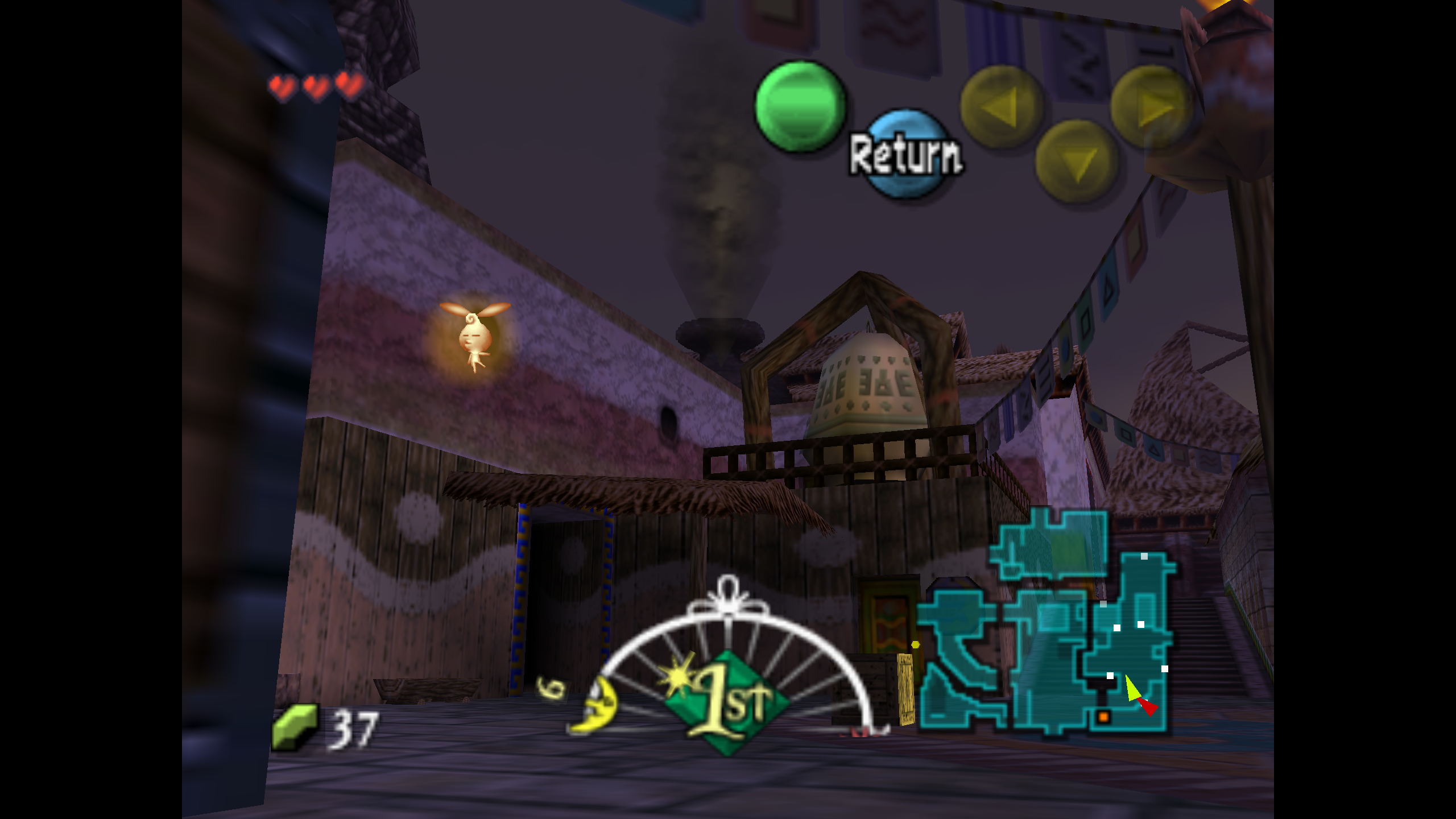 FAIRY (it's there on the left)

(the astute among you might notice it says its the first day again down there. I accidentally closed the game and had to start from right after I'd been to the fairy fountain.)

A jump up on a flower, and I got the fairy, and scoop, we're back in business: Great Fairies haven't changed, I see. Great. Time for questions. So, great fairies are assembled of little fairies? But different little fairies than the ones who follow me around? You grew careless? Ok. I have great faith in you already. 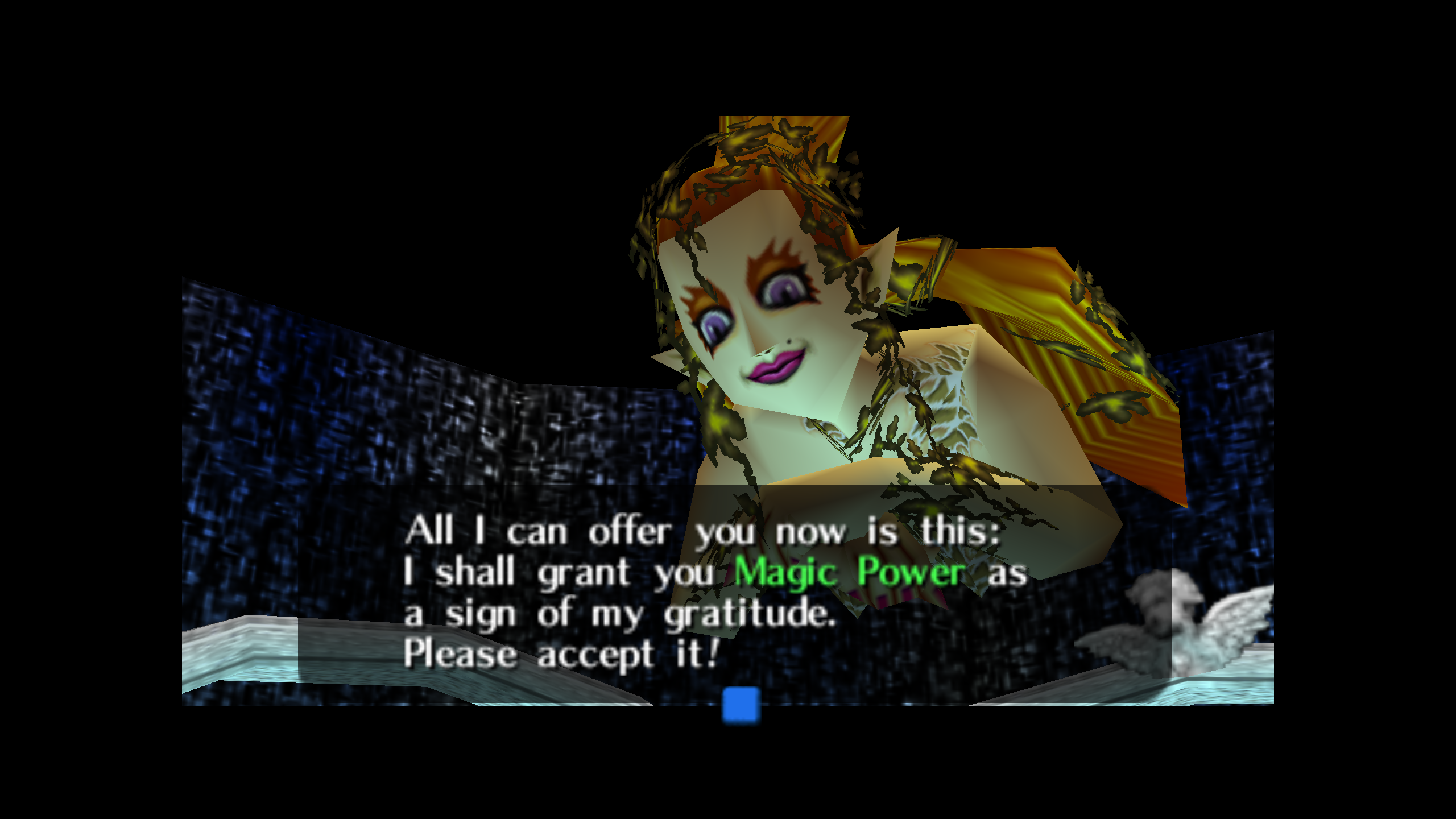 So now you'll just give me magic power. Ok. Nothing ironic about that. 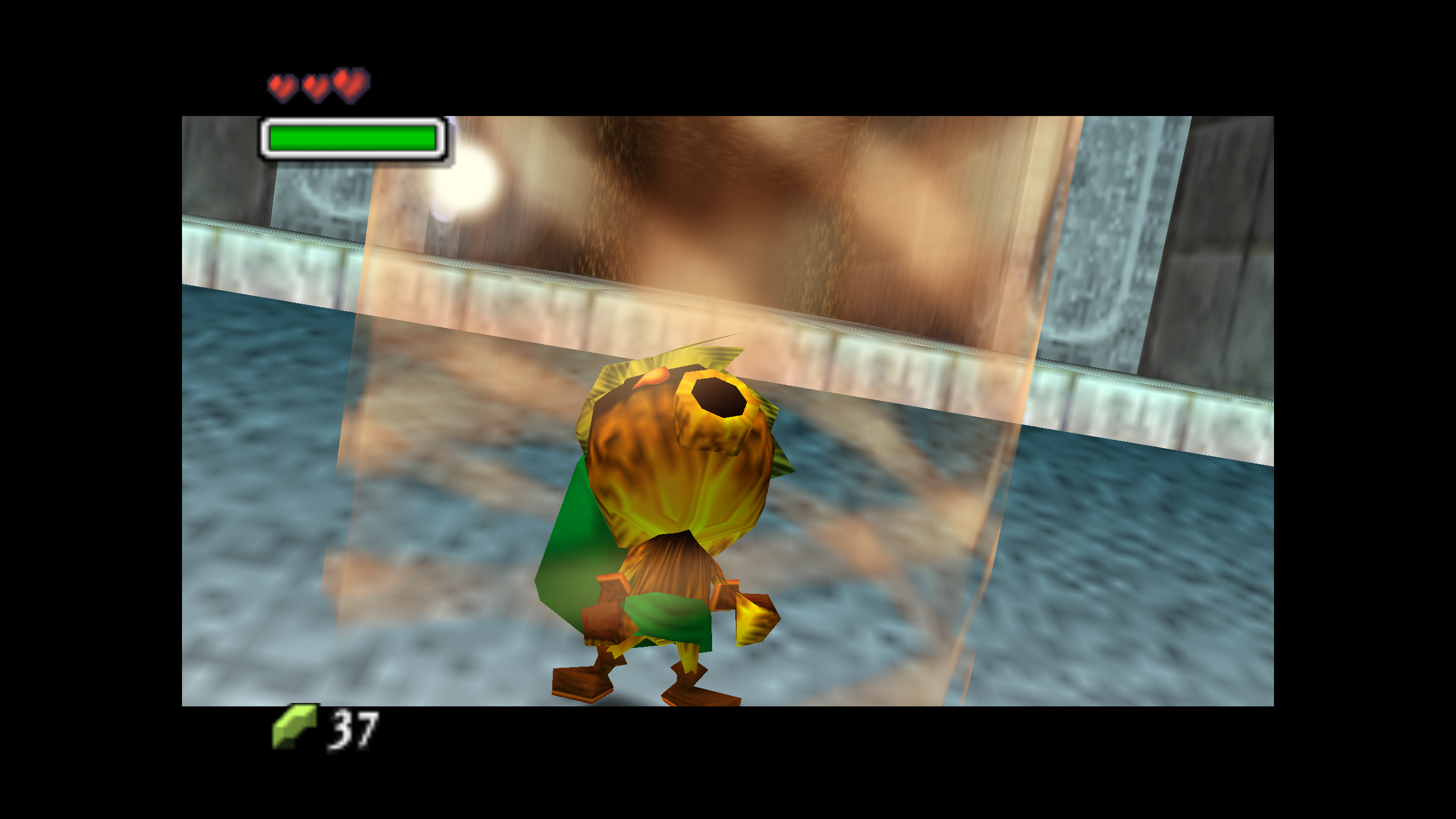 Last time, I got the ability to fucking whirl FIRE around me. And now you're giving me BUBBLES!?

The recession even hits fairies, I see.

Then she tells me to go find the man who lives in the observatory, because he might know where Skull Kid is. Whatever, lady, I'm done with you fairies and your magic.

Time to go ask some kids about a secret passage. 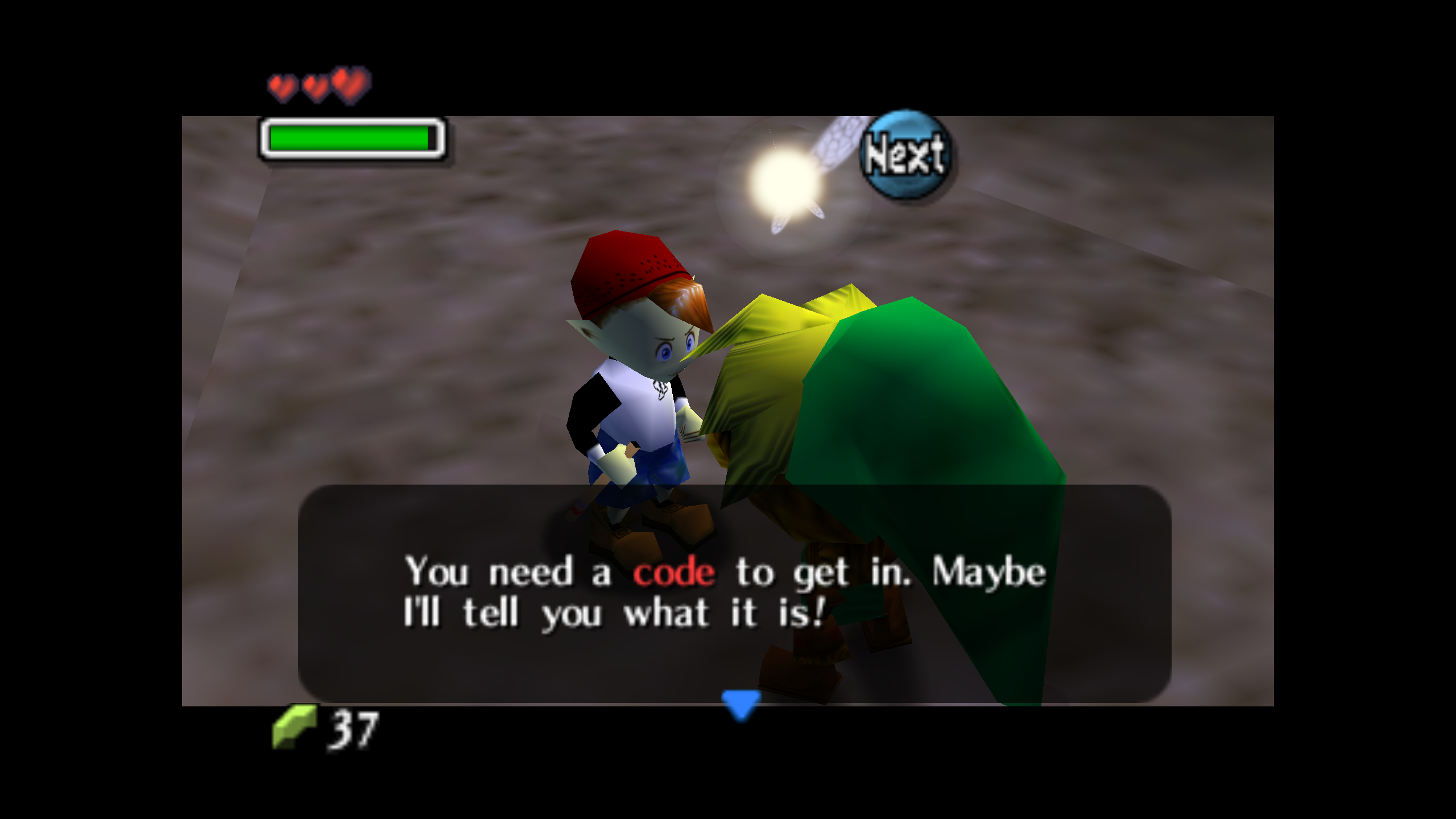 The problem is that he gave me that quest in the middle of the night. Which, leaves me with about 6 hours to find them? And six hours, if you haven't realized, passes FAST.

So time to boogie! 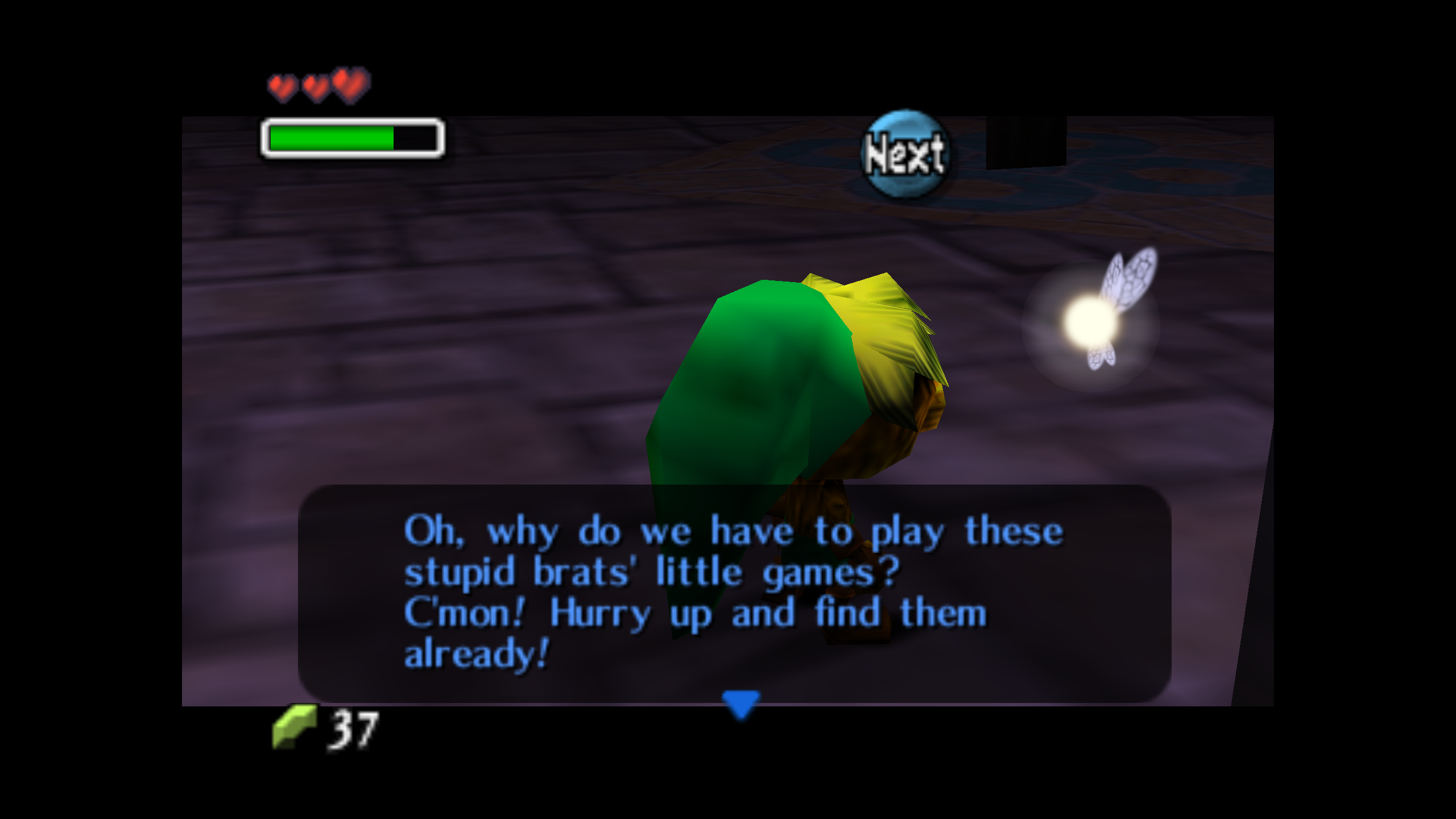 Hey, I agree with you Tatl! That's nice. Savour this moment.

I'm gonna save you most of the kid finding squabbles expect to show you just how much the guards hate me:

Now, kid, that's just straight up cheating. (Yeah, I literally, physically, cannot go there. I had to walk away and wait for the kid to come back out.)

Some kids later and I got them all rounded up for a good talking to.

To reward me, their leader (Jim, a strong, leader-y name) considered letting me in their club (The Bombers) but all the others were immediately like 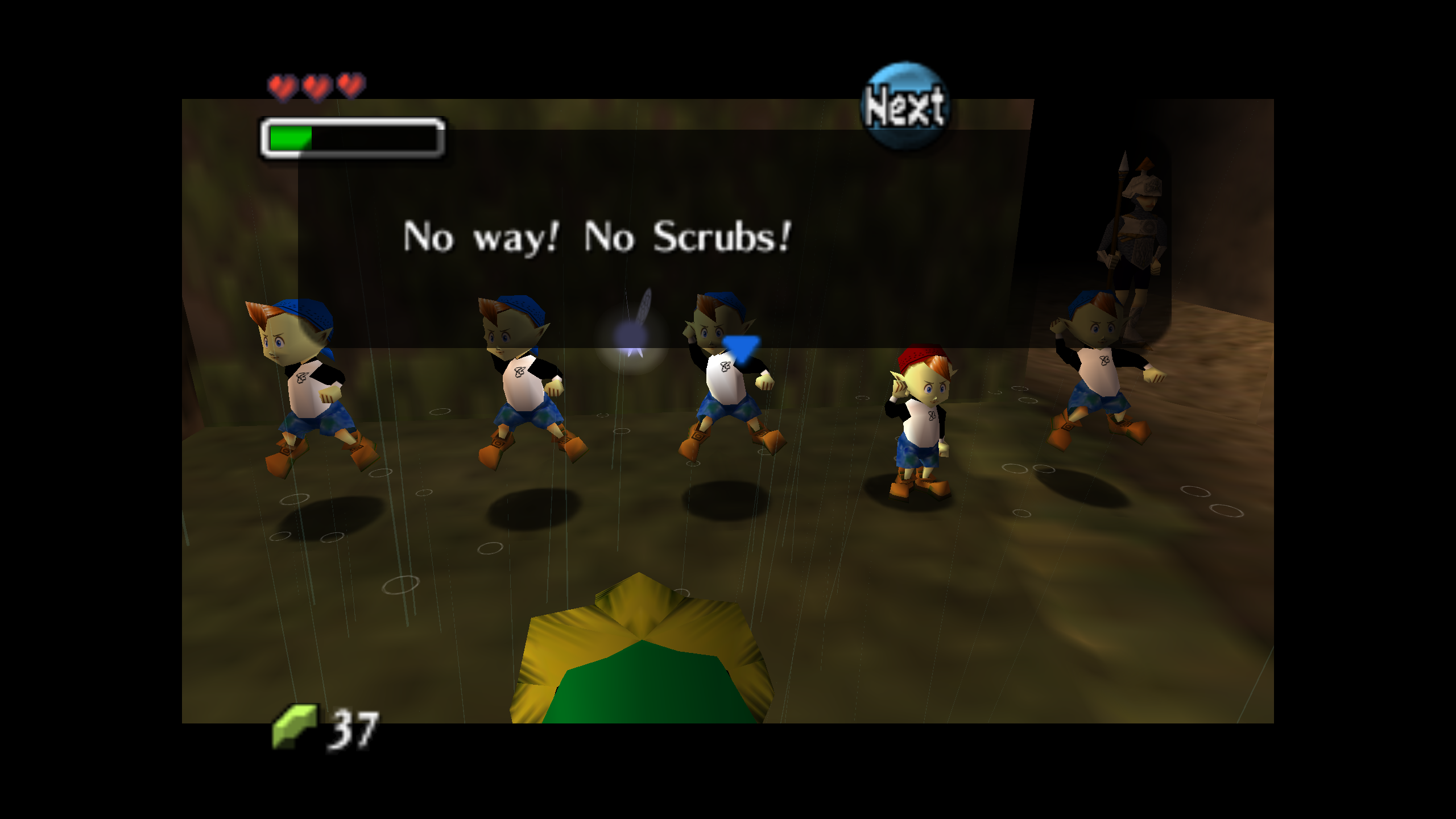 ouch. Jeez. I'm just... trying to get by, guys. No reason to be all shitty about it.

Anyways, then they gave me the code and I was right off, down the secret passage. Cool! Thanks for telling me! I'm very excited now!

I go through the secret passage, and then we have one last reunion with our favourite spider: 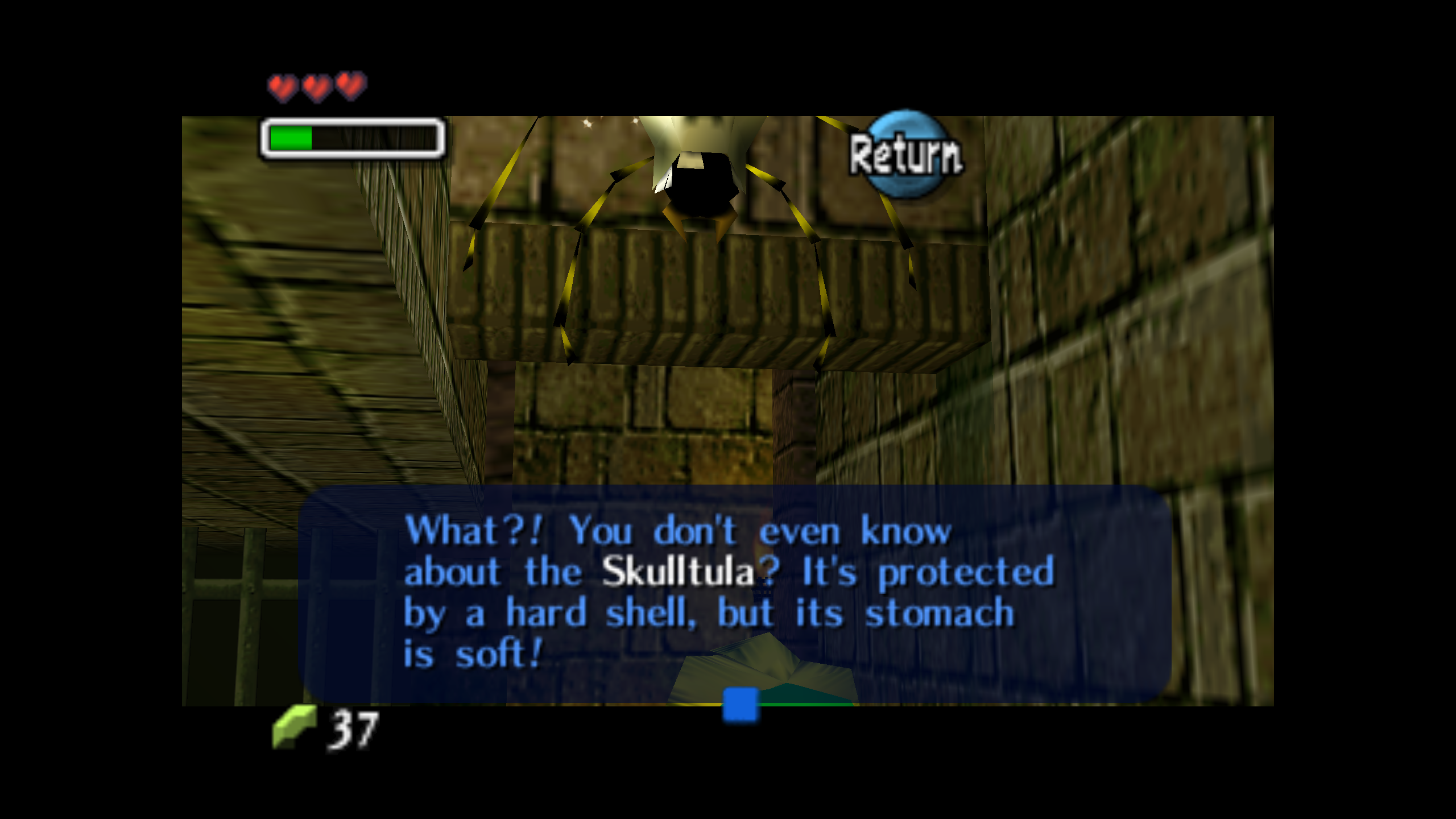 Yeah, Tatl, it is kinda weird that Link doesn't know what a Skulltula is. True.

And then we're at the astronomer's place! We'll find out what he says, in the next episode. Cliffhanger! What will the astronomer say? Will he be looking at the stars? Or the big rock in the sky? Or the economy? Or the carnival, which is apparently still happening while the moon is thundering down towards us? Or the party that's soon happening with me and Wandering Running Man? Will HE get an invite?!
Find out next time, in Part 3!