Hello, I'm back after a week-break and a vacation in Rome! Ready to Fight Fairies and Help Dodongos, or whichever way we were doing it.


We left off with a not-so-subtle-hint that I should go up the mountain to see "The Great Fairy". The path up there is pretty obvious: There was a path up that was blocked by rocks before, but now, with the power of BombsTM I can easily get rid of 'em.
Behind is, as suspected, a neat little mountain-path up to the top, but as I approach, the sky reddens, darkens, and I hear rumblings in the distance, and shadows appear on the ground, and within a second, LAVA ROCKS are falling on top of me. 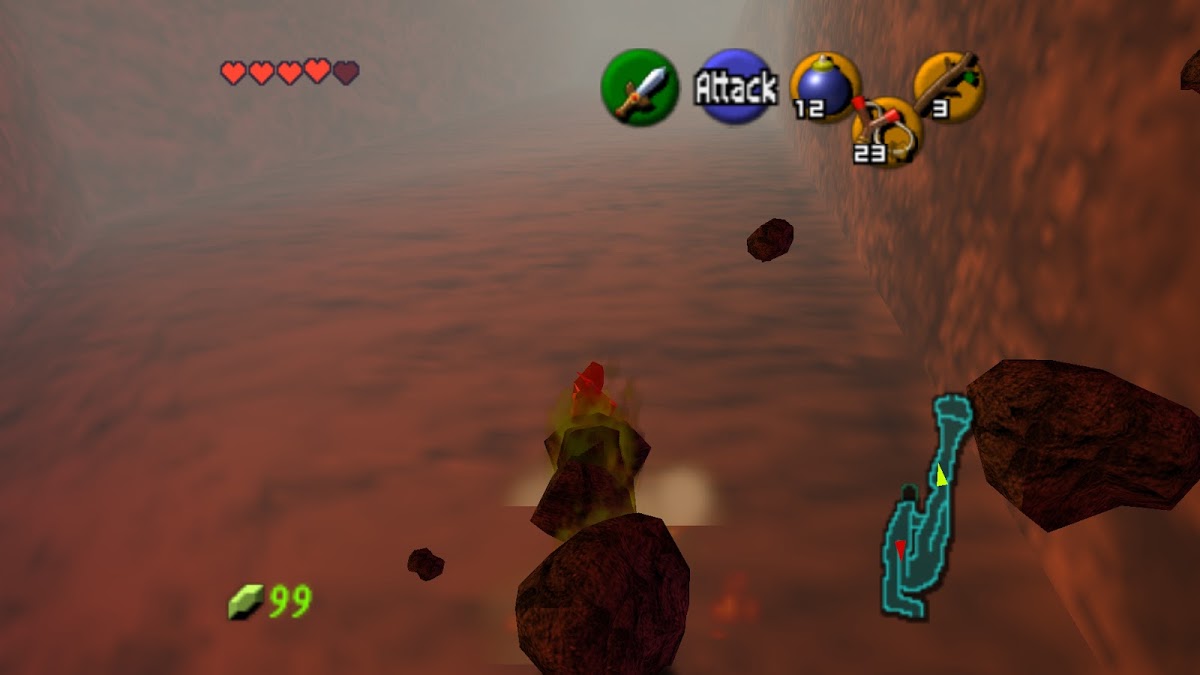 Woulda liked a warning that the volcano was active!
I do a mad dash, but still get hit by almost every rock it feels like, lose over half my health and make it to a wall of spiders but I don't have time to stand there to shoot them down like usual so I climb manically up, hope to make it to the first ledge and just barely squeeze over (and get hit by a spider once) and land safely.
With that little, break, I'm able to shoot the spiders down and crawl the rest of the way up, where we find an old friend again. 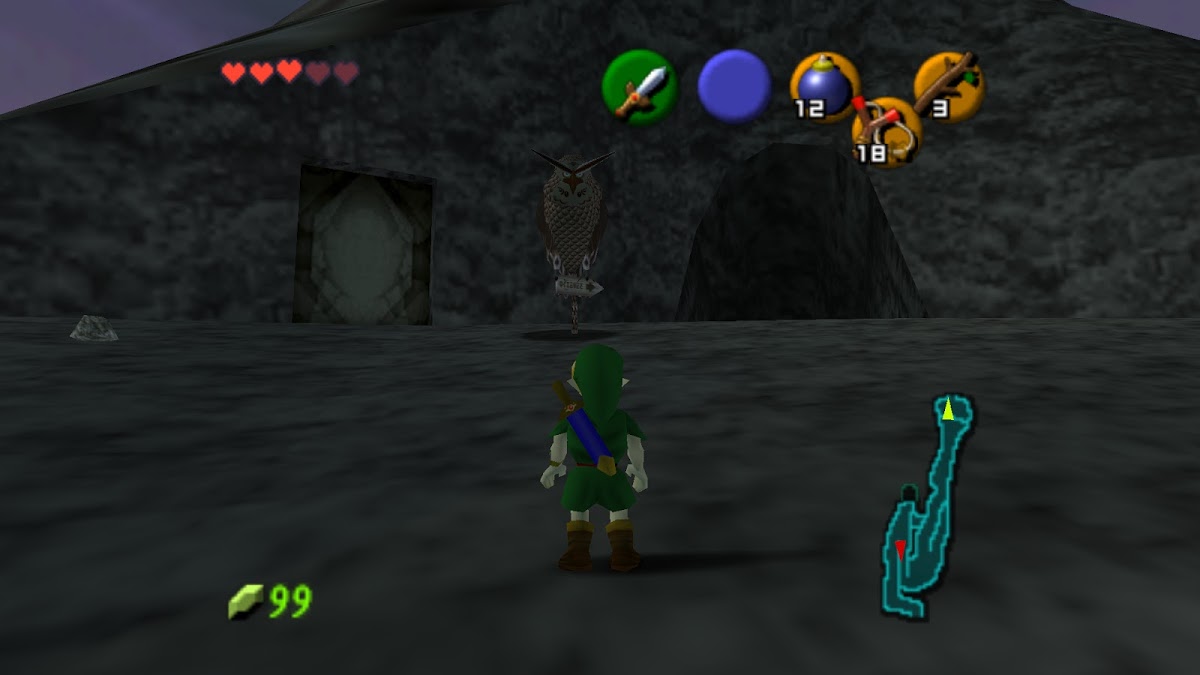 He congratulates me on completing the dangerous trek, and tells me you can see on the clouds of the mountain whether it is active or not.
Again, woulda been useful BEFORE, my guy.

There's a center path on the mountain, but beside it is a conspicuous walled door that I promptly bomb before anything else and lo and behold, it's a secret path to... 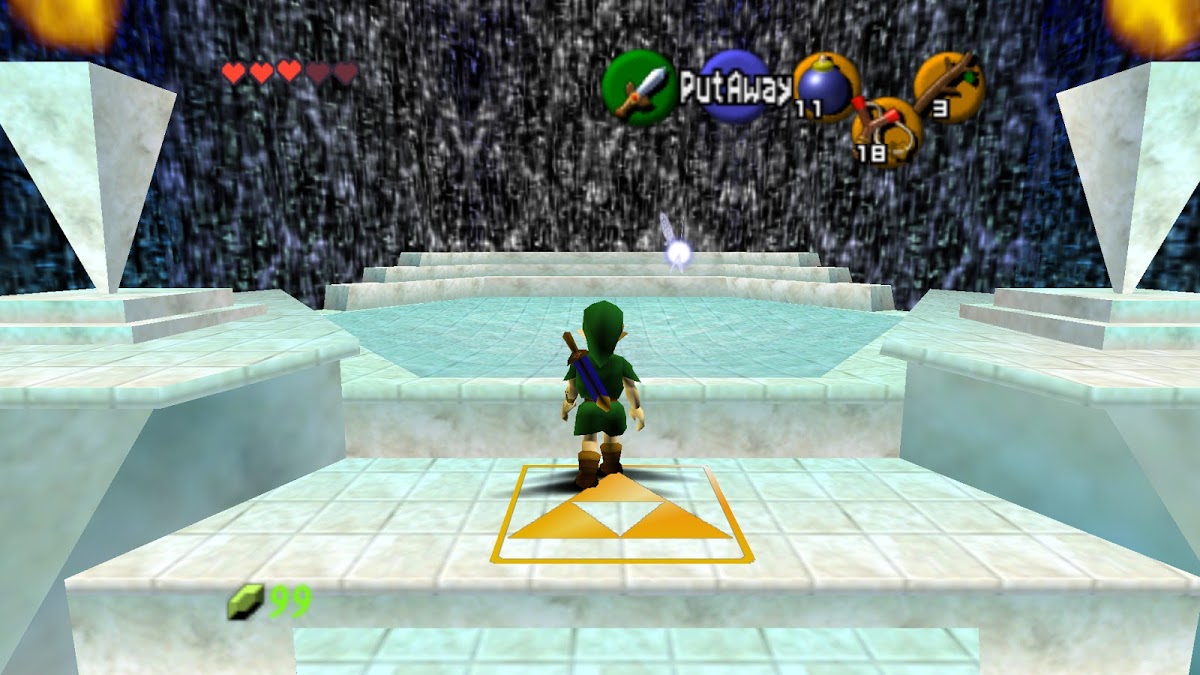 Apparently, that was the way I was meant to go! I walk in and nothing happens, but on the floor is an insignia of the royal family, which the game is so kind as to point out in bright letters, and so, When In Doubt, Play Zelda's Lullaby. 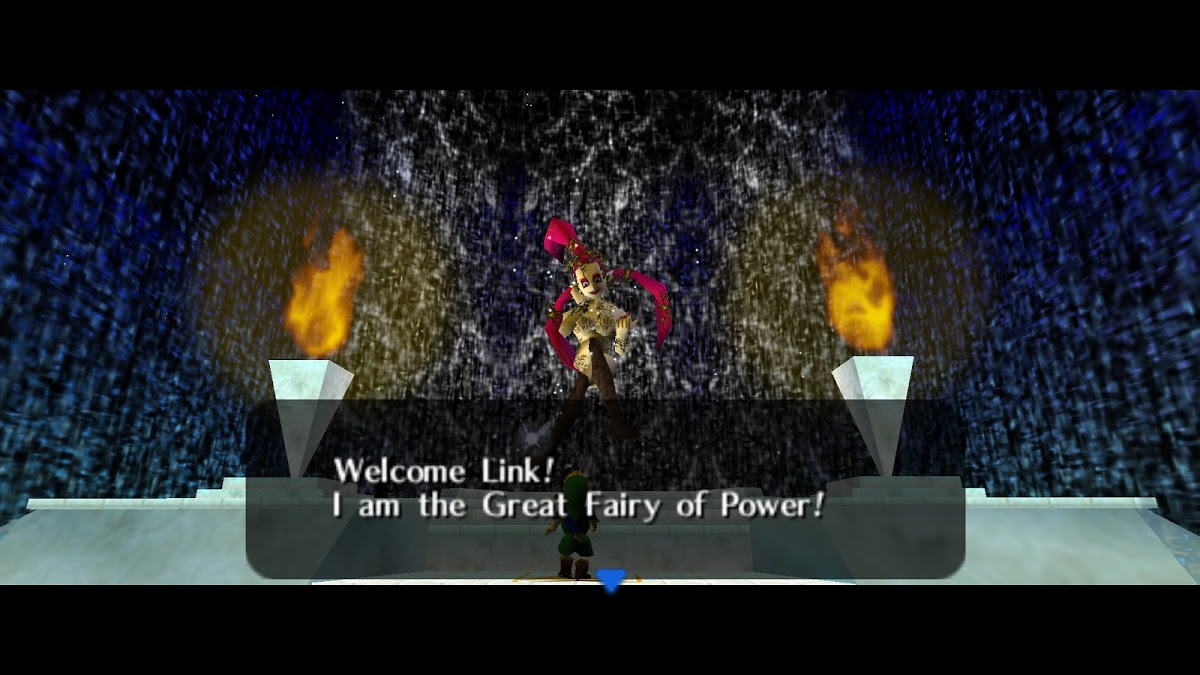 Ahah, the Great Fairy! I have some questions about fairies I hope you could answer. First off, what happens to them when I consume th-- 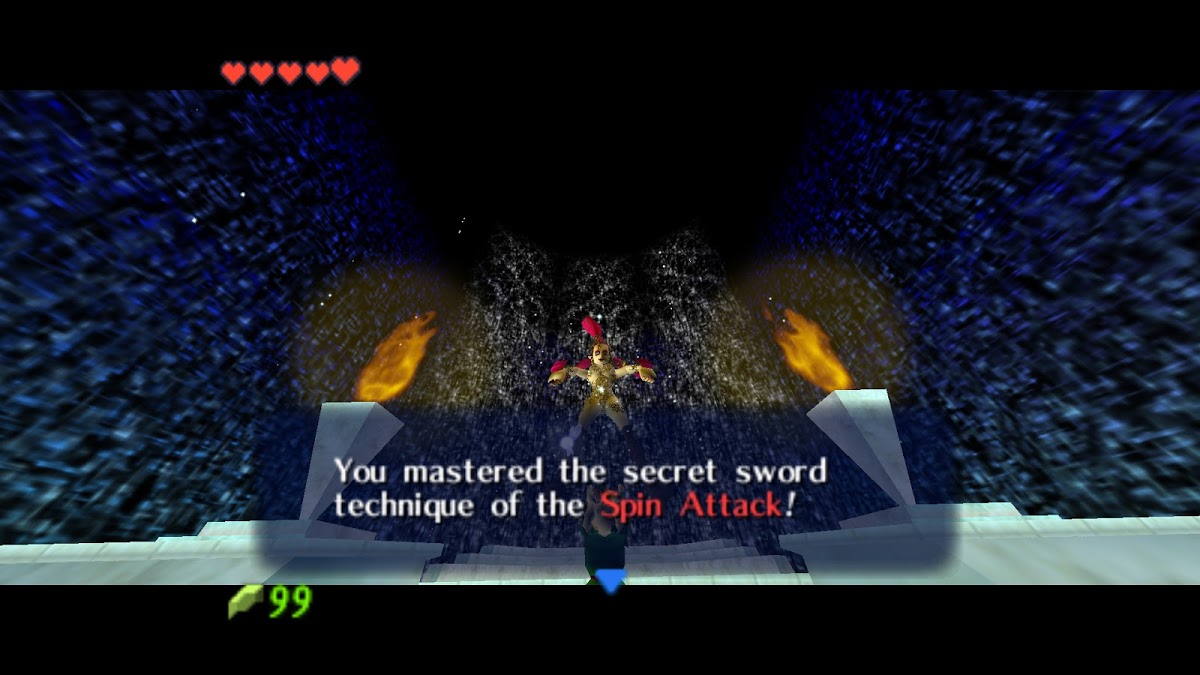 Oh... Thanks I guess. But really I don't underst-- 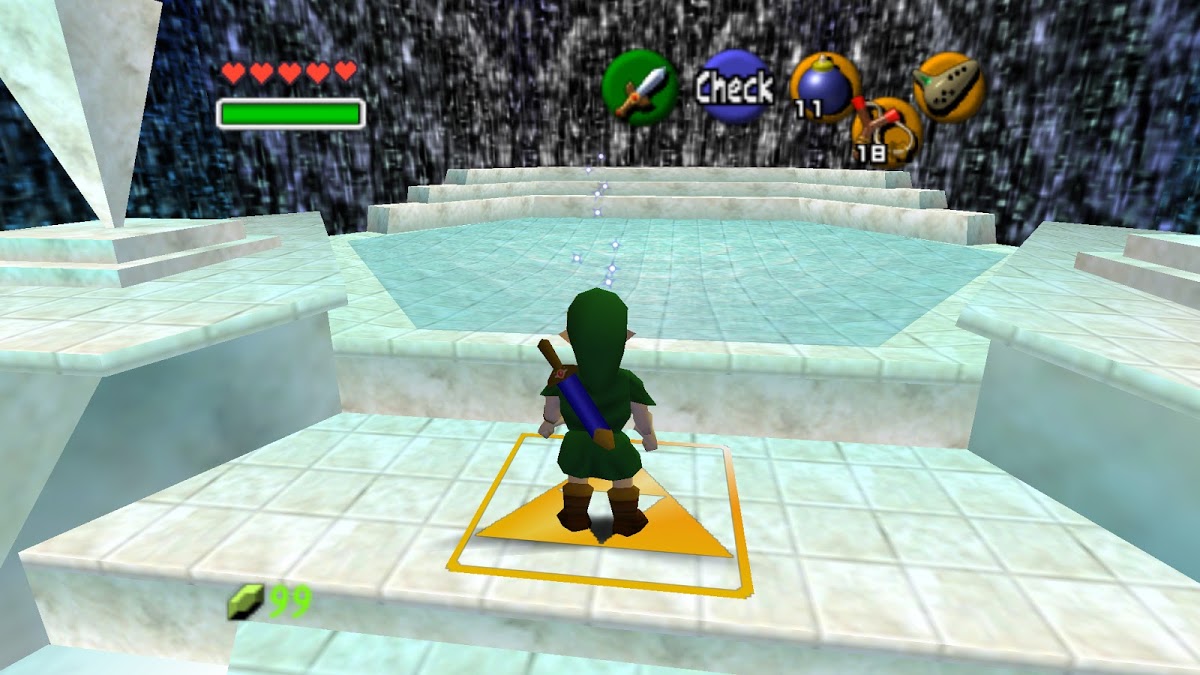 But I learned a spin attack! That's something!
And I got that ugly green bar below my hearts... That's a "Magic Meter". Apparently, spinning in a circle depletes Magic.

That's that! Oh, and before she left she also told me I should go see a friend back in Hyrule Castle.
But anyway, there was another path on the mountain top!
I go in and that's a "Crater" with lava and things and heatwaves (visuals effects!), and there was a brief text popup and a timer of 40 seconds appears on screen.
I missed what the text said because I was writing a note down (whoops), and now the text is just gone, and I'm left with a timer rapidly approaching 00:00. Uhh...

I head back out and jump down the mountain. No, literally I jump down. I didn't really think about it, I just headed for the edge and held the stick forward and Link just jumped.
Alright, no biggie I think, there's barely any fall damage, so I just run ahead and then I remember the Lava Rocks.
Right.

I get hit by almost every one again and survive the perilous run with like half a heart.
Then I die to one of the monsters down the Mountain Trail and I respawn on the top of the mountain again with 3 hearts instead of the 5 I had before.
So I jump down and die to the Lava Rocks instead.
So... I'm afraid I was in a save-loop, but fortunately, I thought to talk to Owl-Buddy instead: 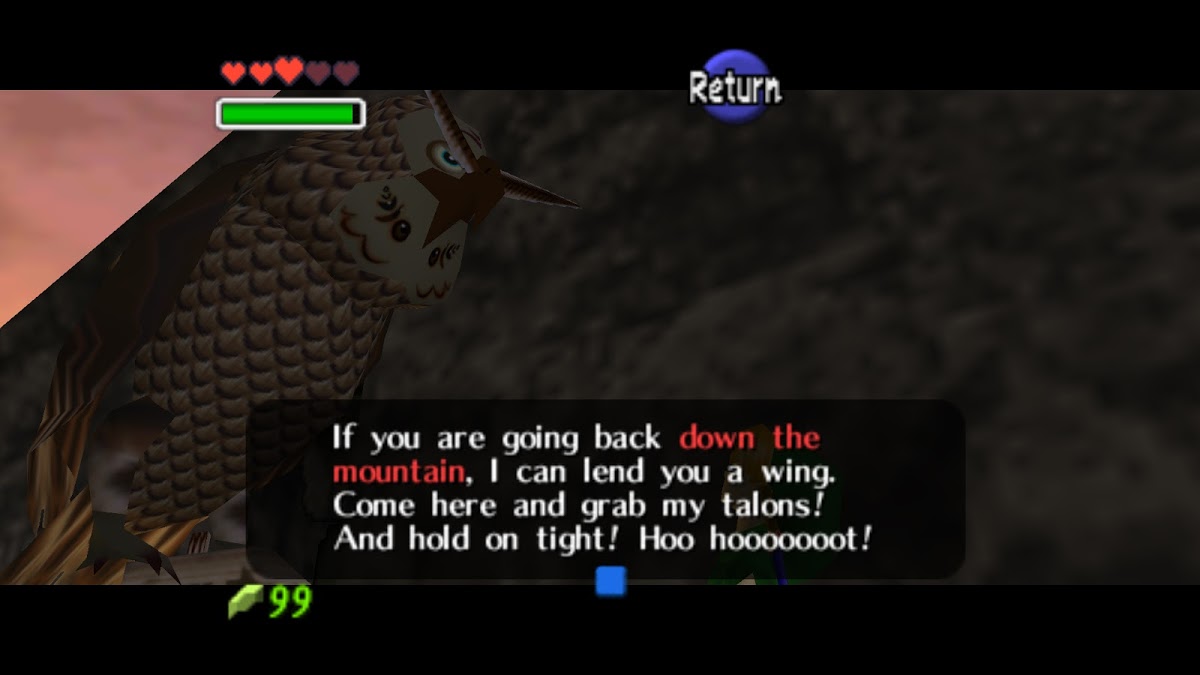 He spins me around all cinematic-style and drops me off in Kakariko Village, where I'm like, so what now? I got one Spiritual Stone, but I got no idea where to get the second. I had no hints about where to go from Zelda, and the only other things I have is a few sidequests like that mask guy and something with a Ranch back in the Hyrule Fields.

And as if reading my thoughts, the game drops this brick on me: 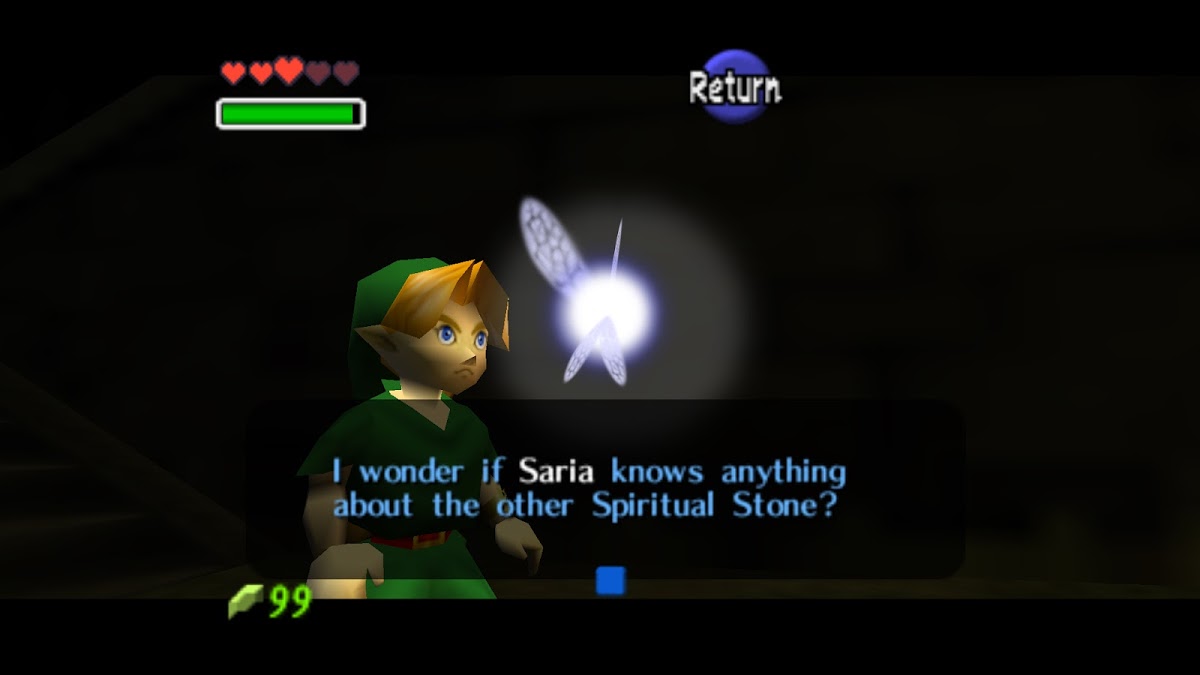 Both Saria and Na'vi can actually be helpful! What do you know!
So Saria tells me that the Spiritual Stone of Water is kept by "King Zora" of the "Zora Domain", which I have no idea where is so that doesn't help me that much until I discover that there's a map screen in this video game: 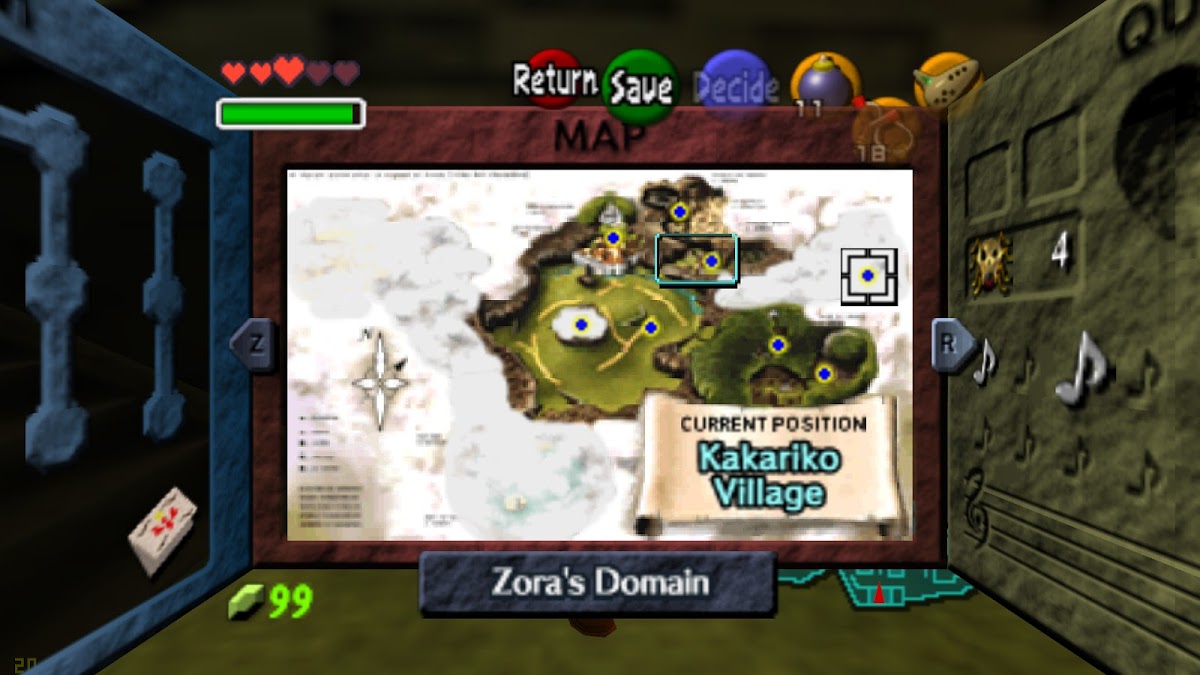 I'm inside the blue square, Zora's Domain is to the right with the white square. 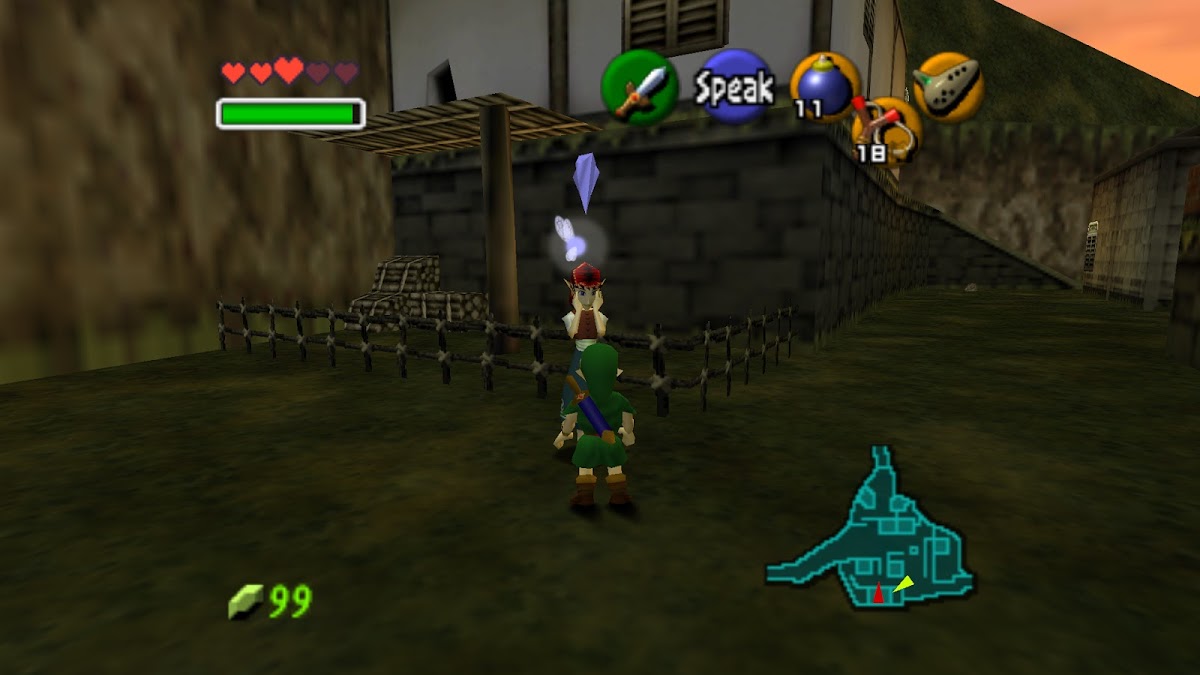 Also, I stumble by the chicken pen again and... No. Just no. Goddammit, I got Heroing to do lady.

Inside the Graveyard is a sign that says I can join "Dampé the Gravedigger's Heart-Pounding Gravedigging Tour", but only at night, and there's a little boy in the graveyard in the day who's annoying and won't let me move any graves by myself.
There's no other paths out the graveyard immediately, but I have a hunch that I might need to go down instead of through, soo let's see what that gravediggin's all about.


I go out the village and wait till nightfall (which is literally like 2 seconds because it was late already) and go back to find the Man of the Hour: 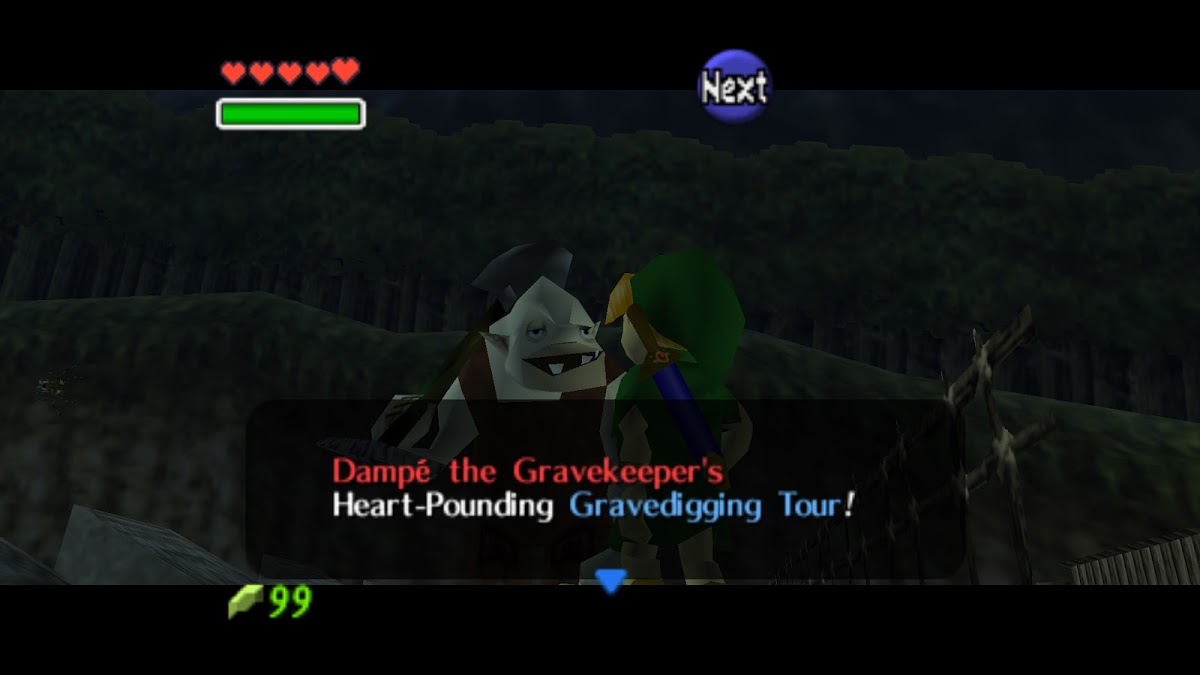 Yep, that's what we're here for my pal.


Turns out, the "Heart-Pounding Gravedigging Tour" is not so much a tour as a "Pay 10 rupees to have him dig in a spot to see if there's anything", which, at first glance, is a bit disappointing.


But naturally, we have to use this for something and in the best video game fashion, along the path are little patches of dirt that seem ripe for digging, so I wait till he is over one of those and then strike!
And get 5 rupees. Return on investment!

But, ok, we need a different strategy, so I scour the graveyard and find a pretty obvious hint: 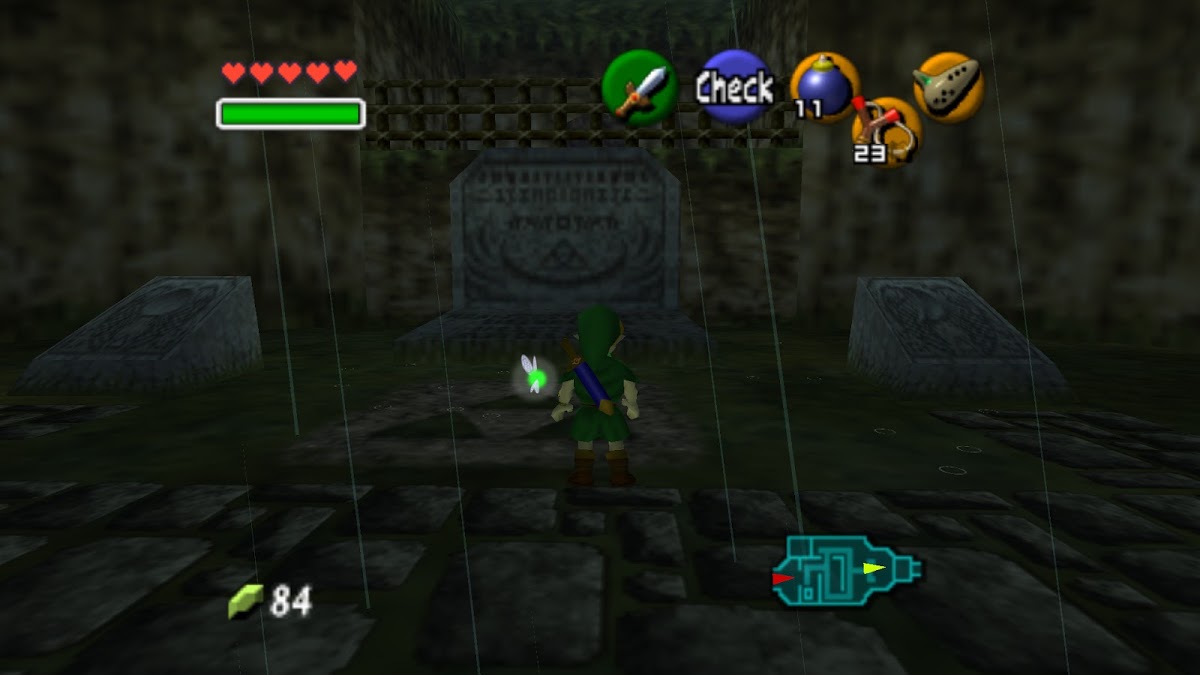 Well, this looks like a place i want to dig. And I'm practically Royal Family at this point, so I can't see that anyone will have a problem with that.


Problem is, Mr. Dampé doesn't walk up there. His path is just around the main loop of the graveyard and not up to the Royal Tomb so he's now useless.
Guess I gotta do what I wanted to do anyway: Move a grave.
See, you could try to move graves during daytime, but the kid would throw a fit and say he'd tell Dampé.
But at night it's apparently not a problem, even though Dampé is right there...
Sure.
Anyways, I move a grave and thing fucker pops out! 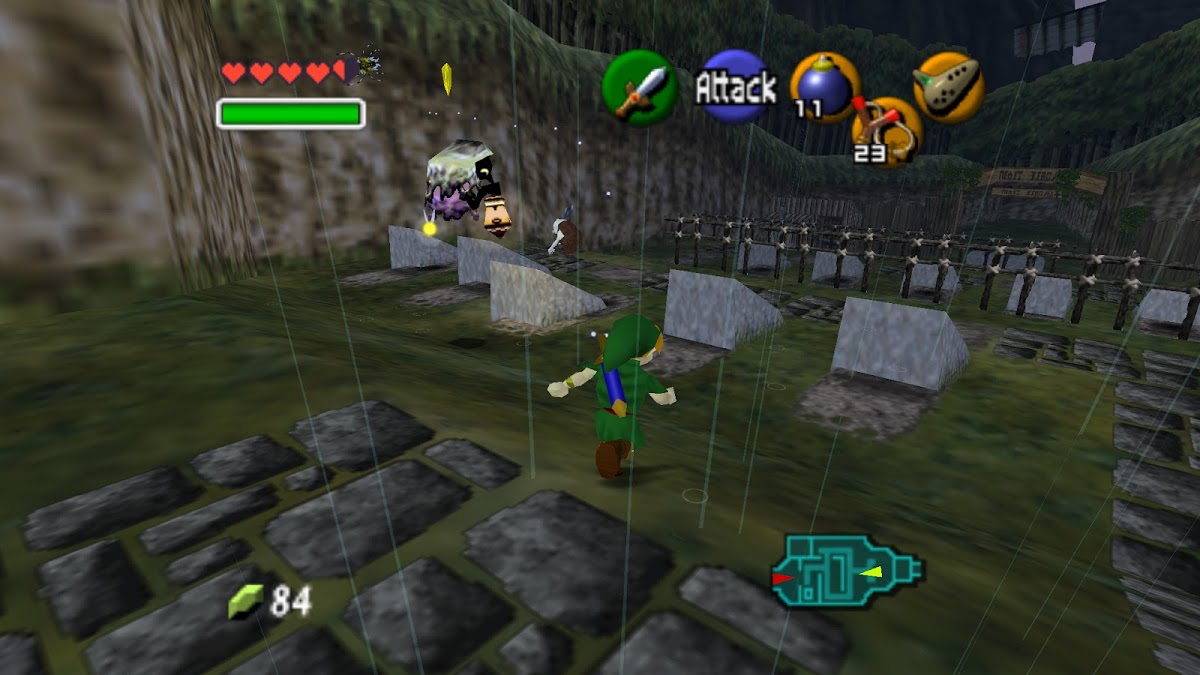 This one was hard to take a screenshot of because they disappear when you target them (one of their traits) so I couldn't Na'vi-Freeze them like normal. It's called a "Poe", though.

I fight it a bit and it eventually flees but I have to rethink my strategy, and go look at the Royal Tomb again.
At the familiar symbol on the ground, just like in the Great Fairy Fountain.
At the tri-force symbol, like all the other times.

Say it with me:


When in Doubt, Play Zelda's Lullaby. 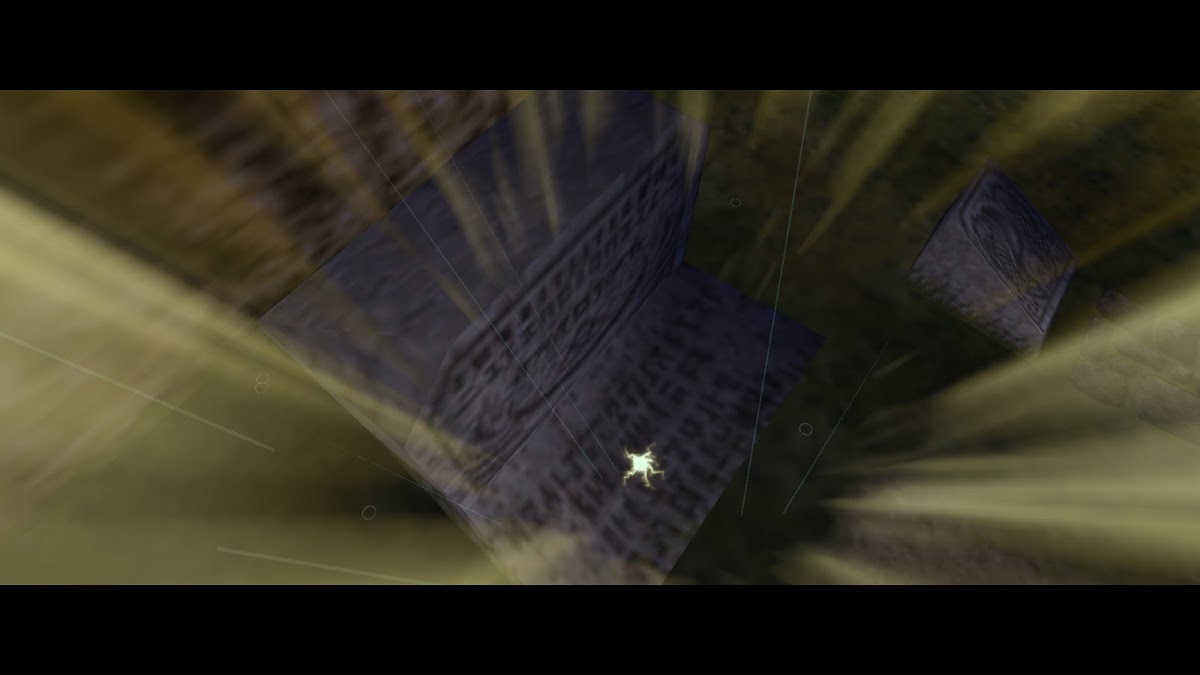 This time, though, I don't summon a fairy or make someone dance (unfortunately, I bet Dampé's got moves), but instead I make Lightning strike from the sky, smashing the grave(!) to rubble, revealing a hole in the ground. 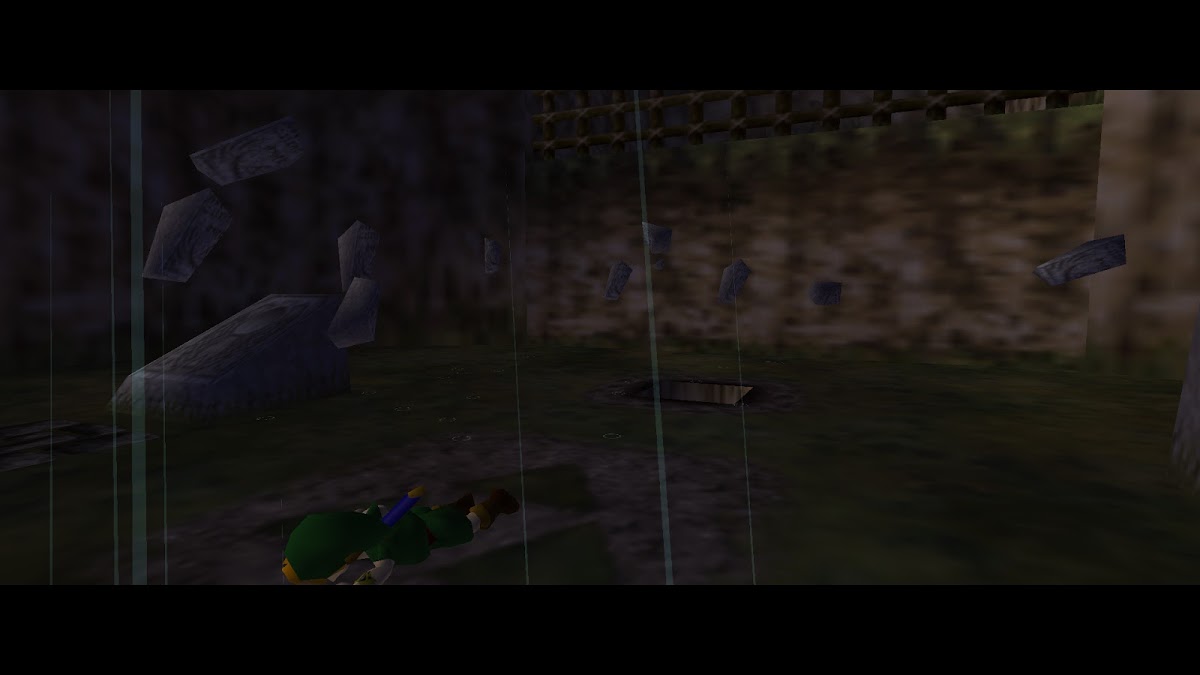 That was more effective than just having the guy dig it up, sure.
We add to our collateral damage to include an ancient graveyard stone.
Add to our abilities the ability to summon lightning. Nice.

Let's jump down a hole in a spooky graveyard!


Next time.
Sorry!
But that should be enough for one episode. I plan on being back on my regular once-a-week schedule now and don't think there'll be anything stopping that for a while, so let's get that Water Stone real quick and see the ending of this game!
..That's it, right? That's where it ends? Yeah? There's nothing else?
(I know there is)