I left myself at the beginning of a tomb last time, so let's do some o' that Tomb Raidin' we're famous for. 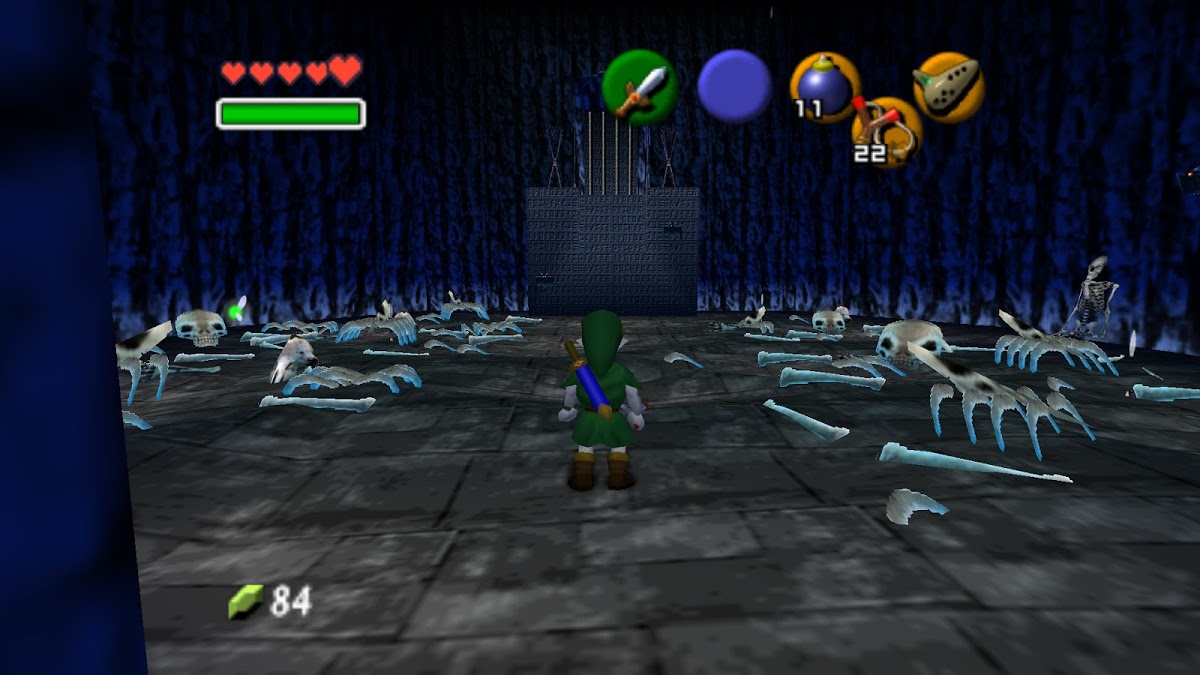 Right. Tomb. I guess I should've expected that. But damn, just letting them all out there, huh? Talk about skeletons. Also, what are these? Most of those ribcages look like they come from something quadrupedal. So, the Royal Family used to be Cows? Let's just go with that. Cows.
Also in that room are a number of bats I deal with with my trusty sling-shot, and that apparently unlocks the door, because of course it does (look, the door is magically tethered to the bats who protect it and when it senses all the bats lifeforce is gone it opens, it's magic 101. If all the bats died of hunger the door would also open. It's Bat Security.)
(Sorry.) 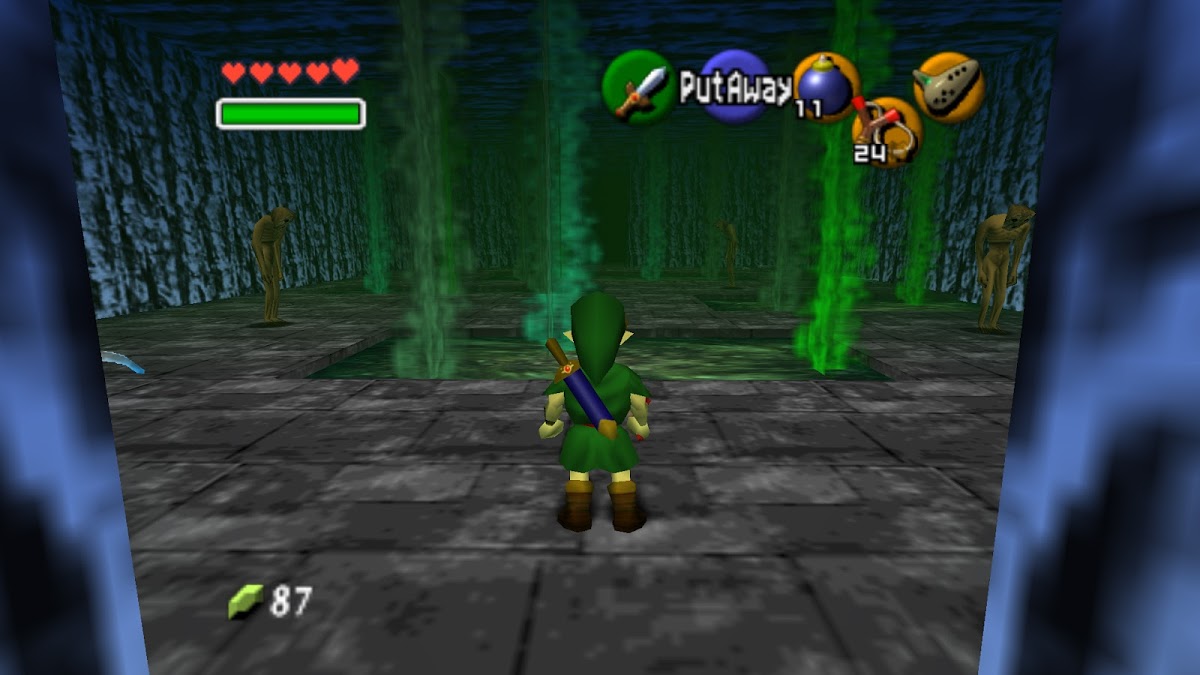 The next room, though, why in Na'vi's name would you have this in your own tomb?
And those mummy-zombie, looking things? Yep, they're just mummies. Or "restless souls" or whatever. When Link gets close to them, the camera does this skewed freezing thing and Link does a little scream to let us all know that these freaks are not to be messed with.
Still, one of them grabs me and this happens: 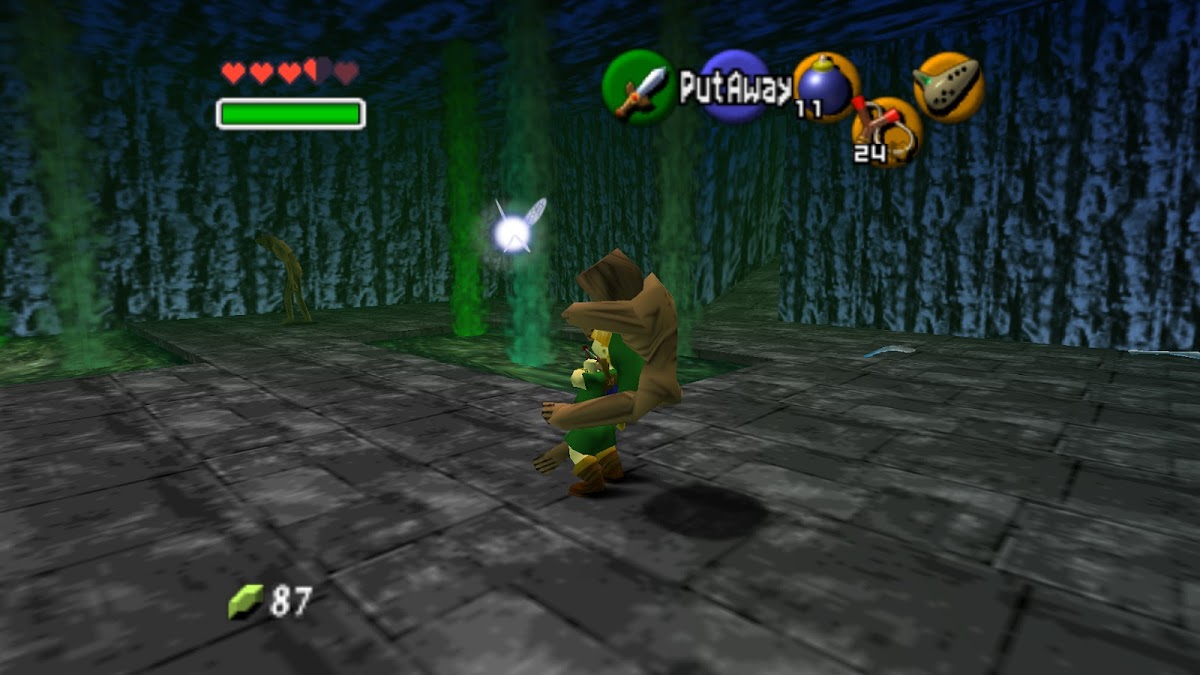 uhuh. Yep. Thanks, but, please get off me I got a Tomb to raid.

I skitter the hell outta there and run across the room. The only saving grace about these things is they're slow, so it isn't that hard. And then we get to the real treasure: 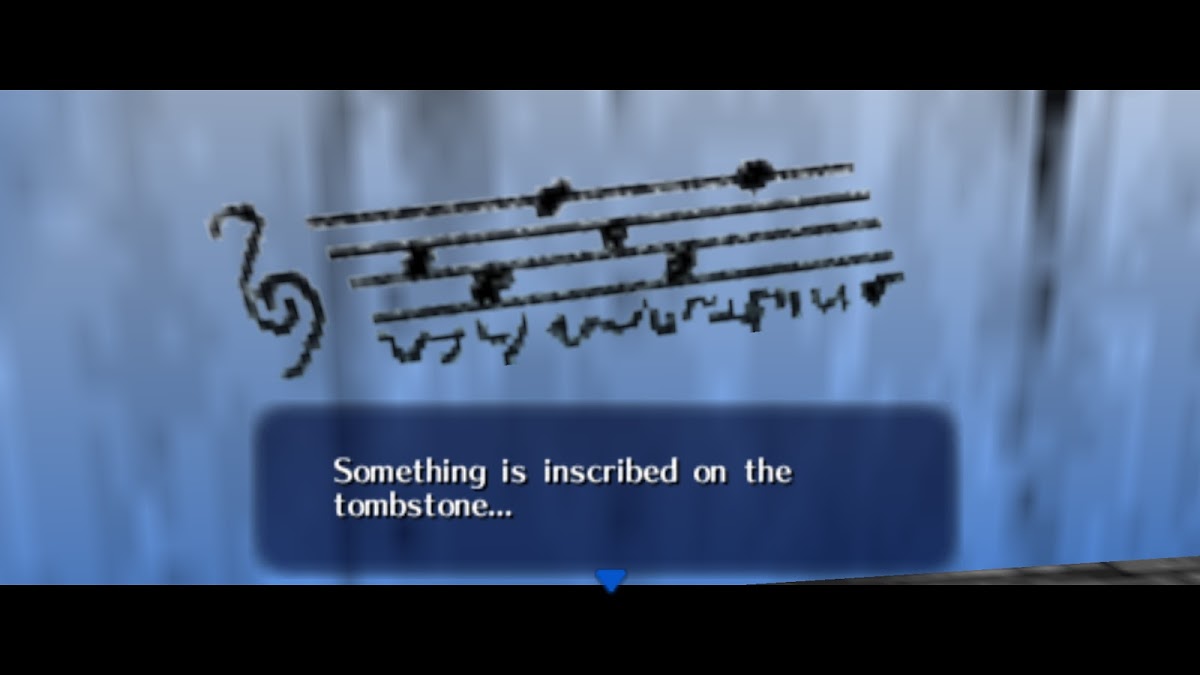 Ok, there's a little more. There's a tomb (again?) with a poem on it I didn't write down so I don't remember it, but then there's this little song written by the "Composer Brothers"TM because of course they'd just sneak in and write a song on the Royal Tomb.
The song is the "Sun's Song", and I play it and the camera cuts outside to show the sun peeking out through the clouds. Ooh, I can make the sun shine? Neat.
It also says that this song will help but "restless souls at ease" so the first thing I do is go back and play it in the previous room. 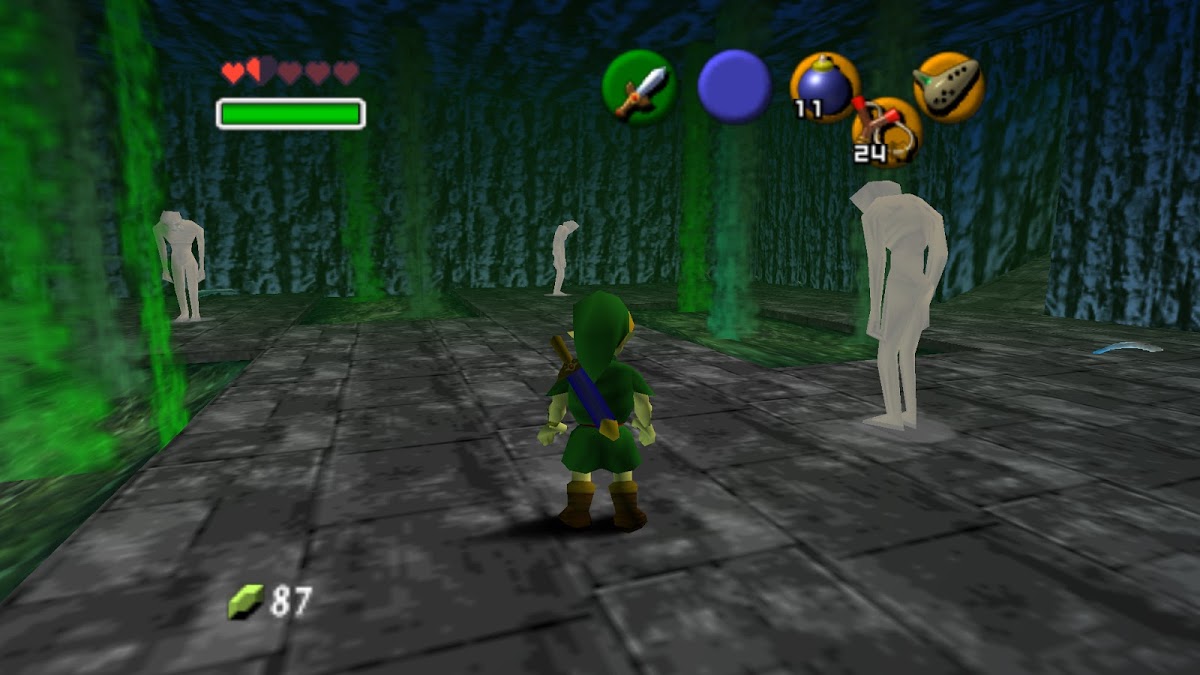 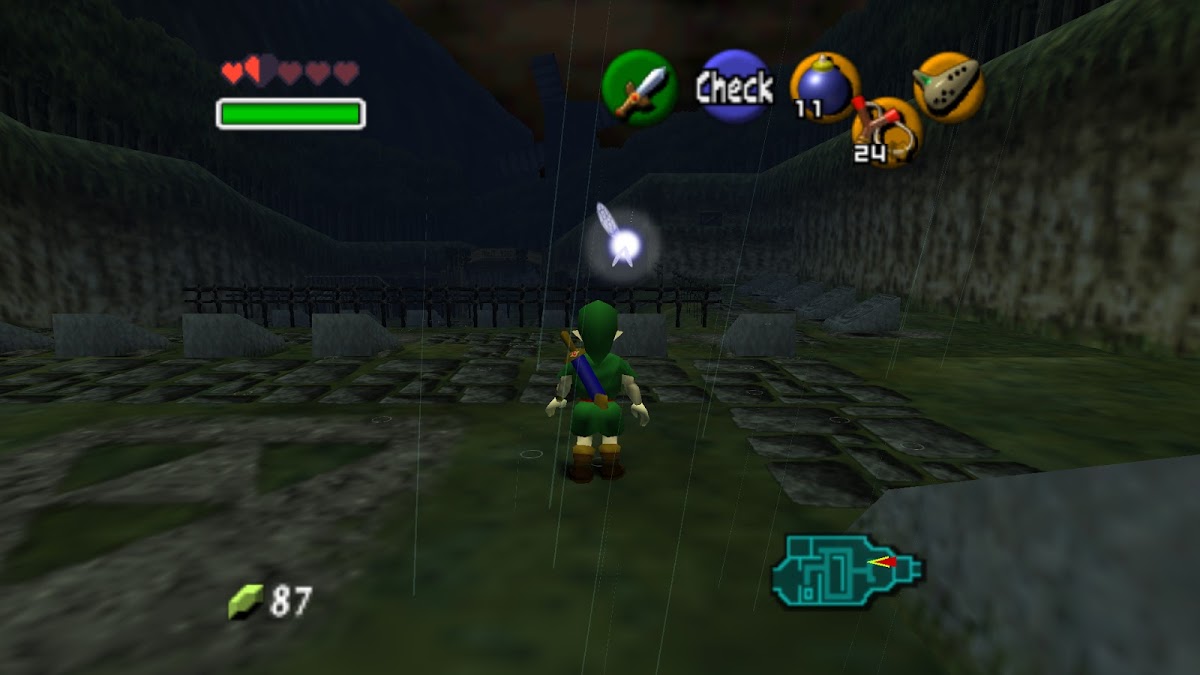 Ok, clearly this song is broken.
I play it one more time, and it turns to daytime but it's still raining.
Ok, so this song TURNS THE ENTIRE PLANET, but it doesn't move the clouds at all. Got it.

But now I am once again without direction and so I stumble out of the village and back into Hyrule Field and take a look around. I know I need to go east, and spot that on the minimap is a pathway eastward a little further down.
Maybe I should've popped back to Hyrule Castle of the town to buy a shield or something, but nah, we're not here to buy shields, we're here to Save The World, so let's go.

The path leads to "Zora's River", so that sounds like the right direction, and guess who! 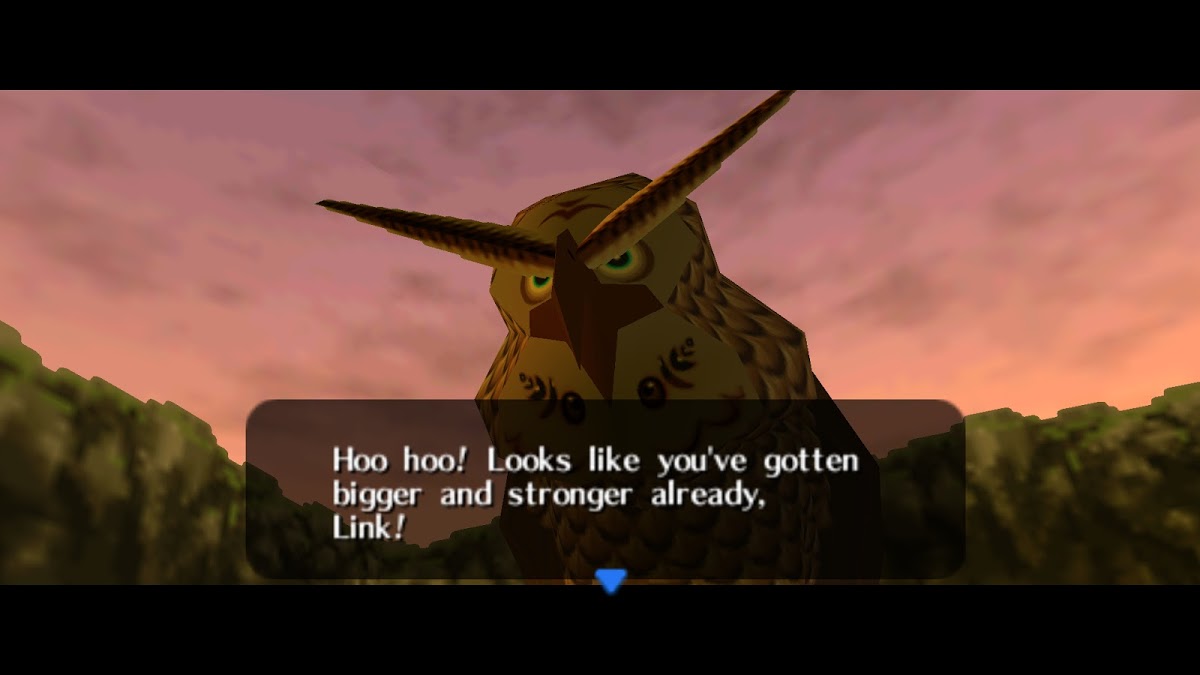 Owl-boy! ...Dunno if I agree with him, though. I got a bracelet and a bag of bombs.

Owl-boy talks some more about how this is the way to Zora's Domain and I need to play the "melody of the Royal Family" when I get there and I yapper through his dialogue because that sure isn't anything I haven't heard before, and onwards we go to this friend who sits quietly by the river. 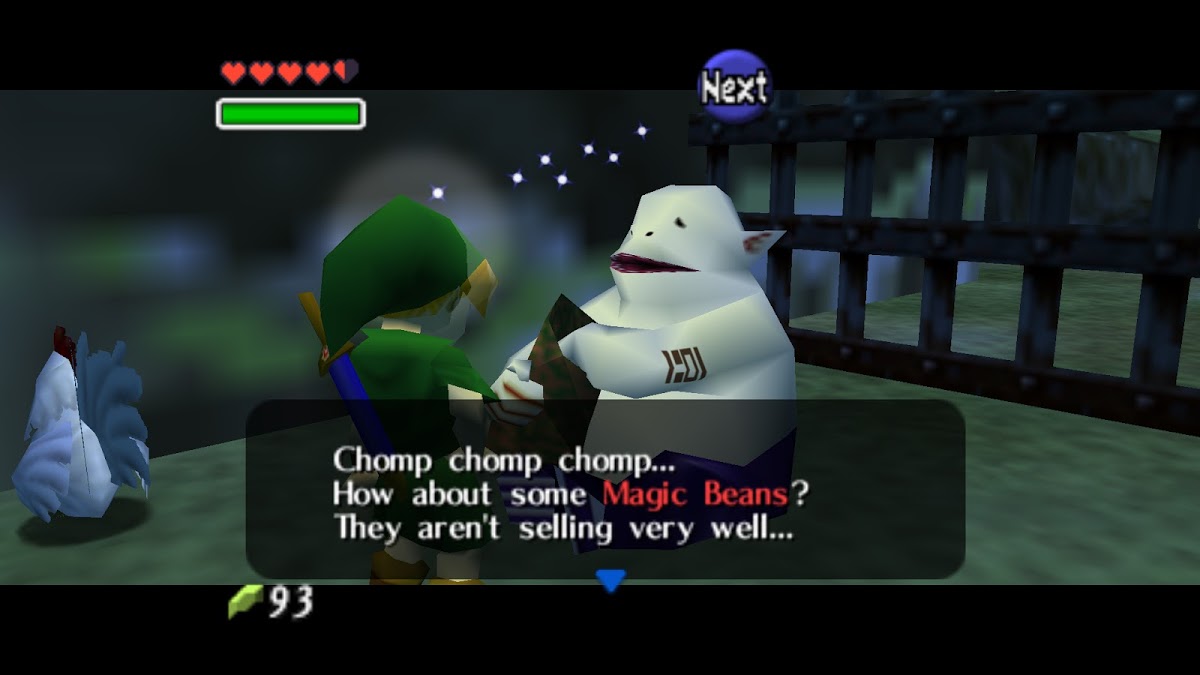 Magic Beans you say? Only 10 Rupees? You got it.
When I buy it, he says I can plant it and and "wait for the fun to happen" so I find the nearest dirt-spot and plant it and.... 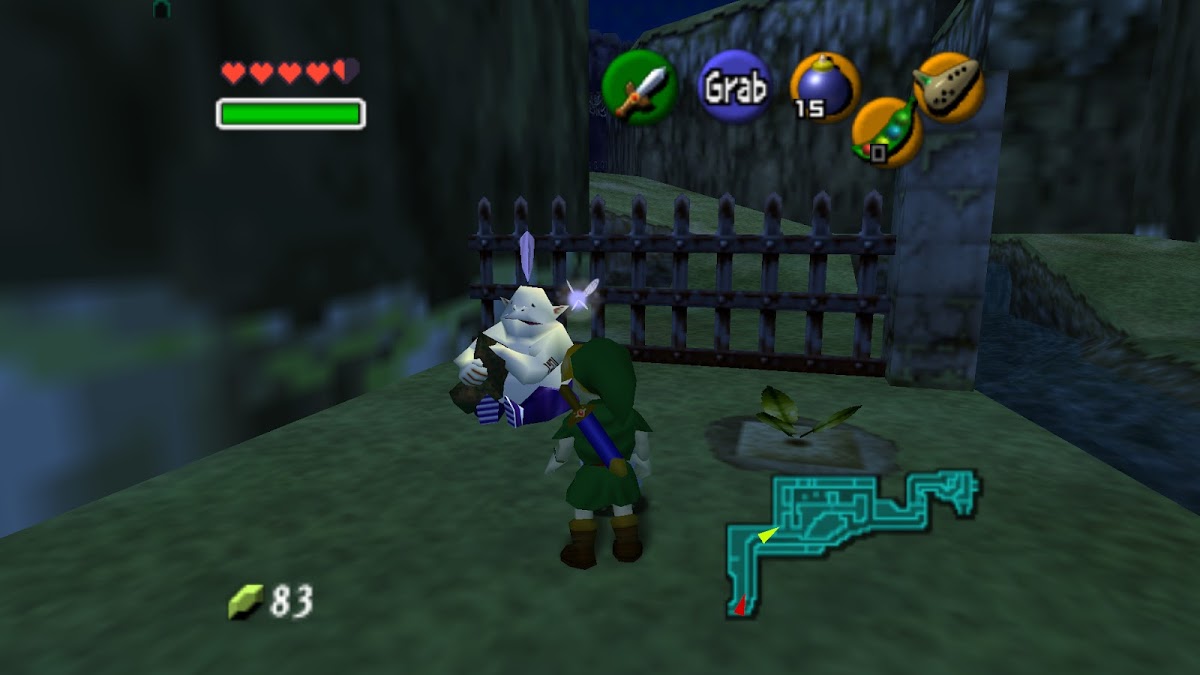 I've always told myself that when I didn't know what I needed to do I just needed to wait for the fun to happen. Just chill out and stare at a plant grow until--no I'm off, dude, I got a blog to write.

He's got some chickens next to him and I know a trick with chickens he sure doesn't because he's still on this side of the river and I'm not anymore because I grab one and jump and hover over to the other side. 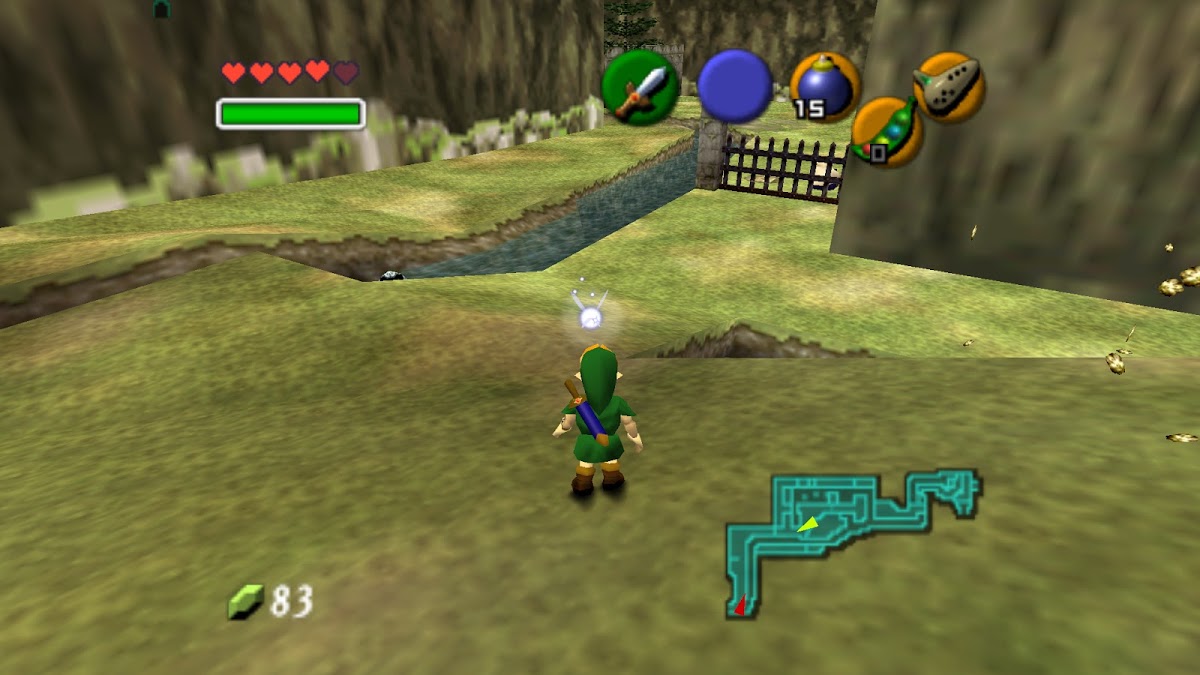 Alright, moving on I get up to the end of the river after some difficulties and some frogs and other fun jumps and get to a waterfall that has this plaque by it: 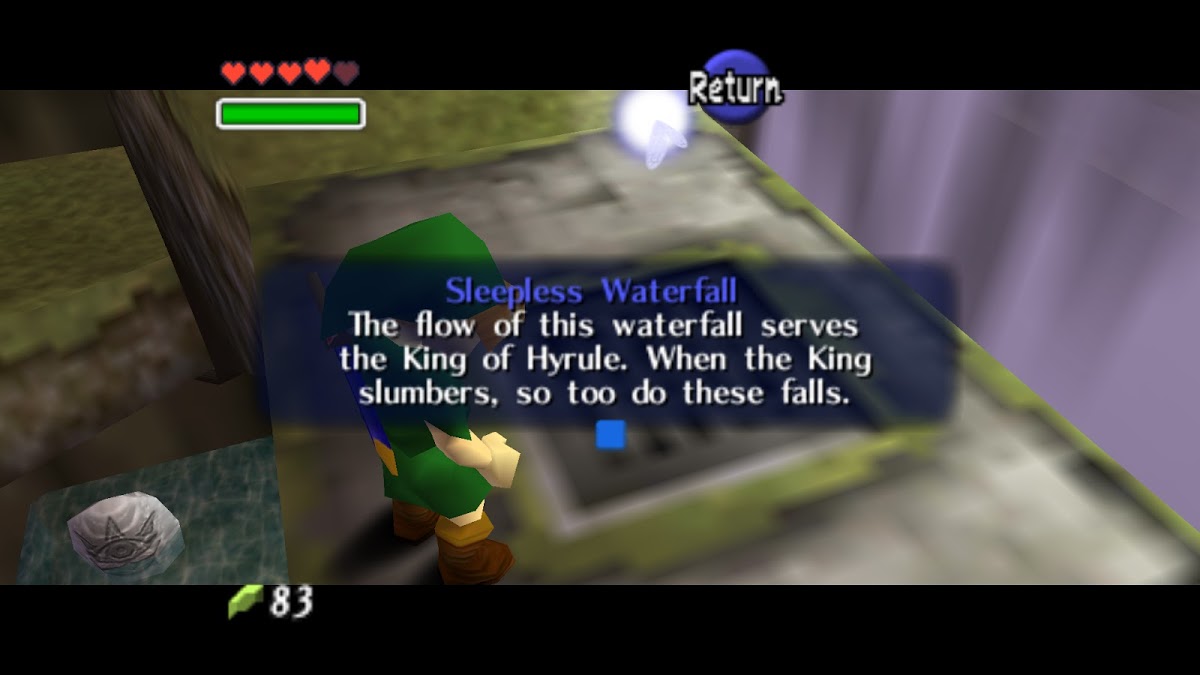 Okay, so when the King sleeps, right? That's gotta be at night? Yes? So play the Sun Song, move on?
Nope. That does nothing. The waterfall is still going, and I can't jump through it (yet I can still clearly see the path beyond).
I look around and try a few other things but eventually settle with the fact that I don't know what to do and maybe I need to get back to the Castle and find some way to get the King to sleep (ooh, fun!), so I swim back the river and at the entrance is 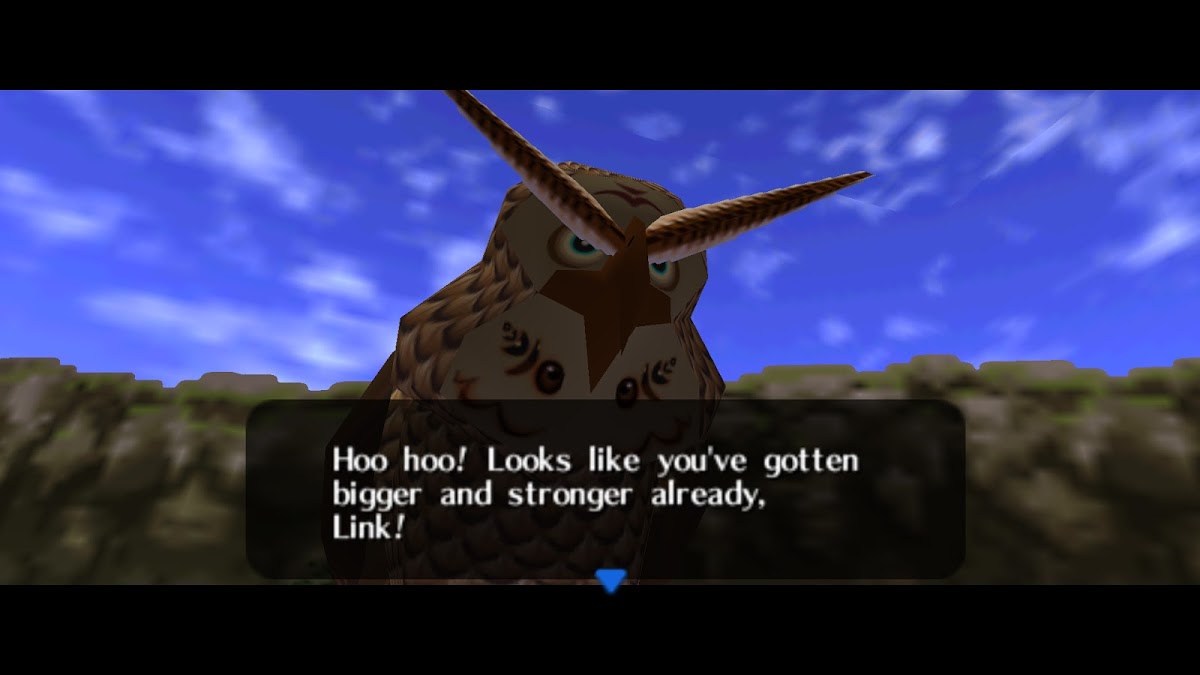 Owl-boy, saying the exact same spiel as when I entered the river.
Huh, first real proper bug I've seen in this game! (I think?)

But, it's actually pretty good because owl-radio here repeats what I didn't listen to before: That in order to get into Zora's Domain, I should play the song of the--

...and I already know what I missed and skip the rest of the dialogue and sprint back to the waterfall.

Say it with me one more time!

I can't believe I already forgot that. (And also, the plaque said I needed to make the king sleep but this is Zelda's lullaby? Something doesn't add up. Does it make all the royal family sleep? Seems like a really powerful weapon; that they just gave to some kid).
Feeling pretty silly, I waltz into Zora's Domain and see it for the first time.

It's a cave full of water. And it's completely quiet. There's no people. Just a some somber, mellow music, and nothing else. The first sign points me towards the King.
So I walk straight in and see 'im: 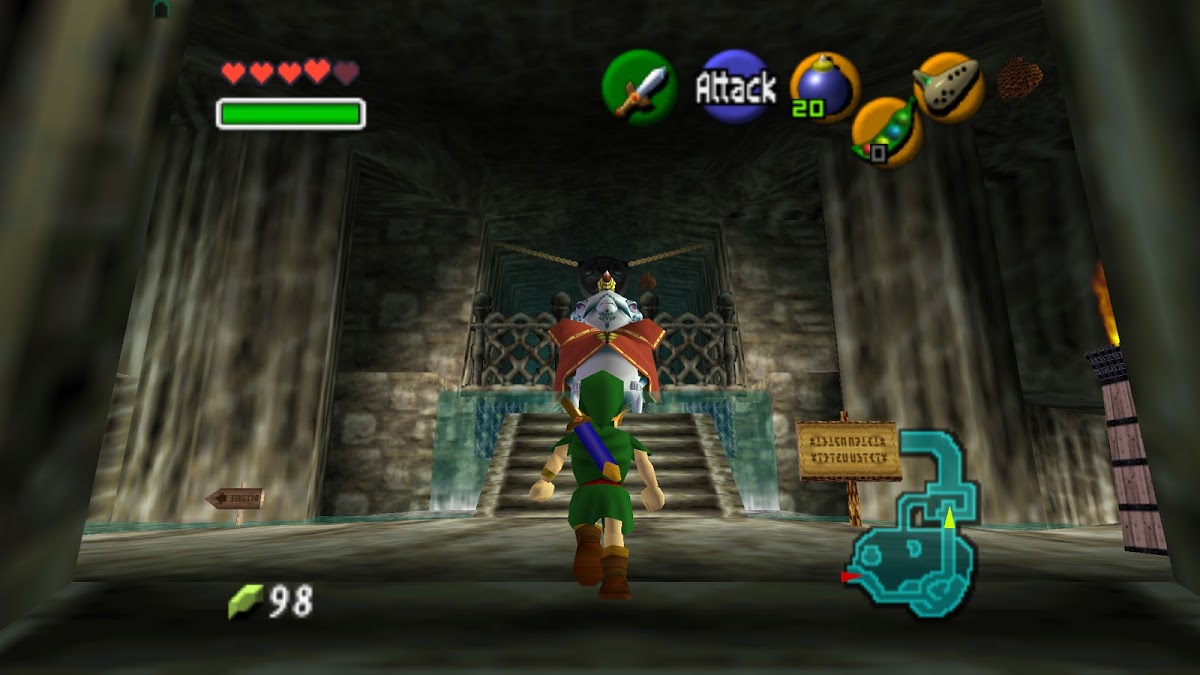 Okay, because we know what kinda game this is, let me just say up front what'll happen: He has some problem and that's all he can think about, and he won't give me the stone until I help him with it. 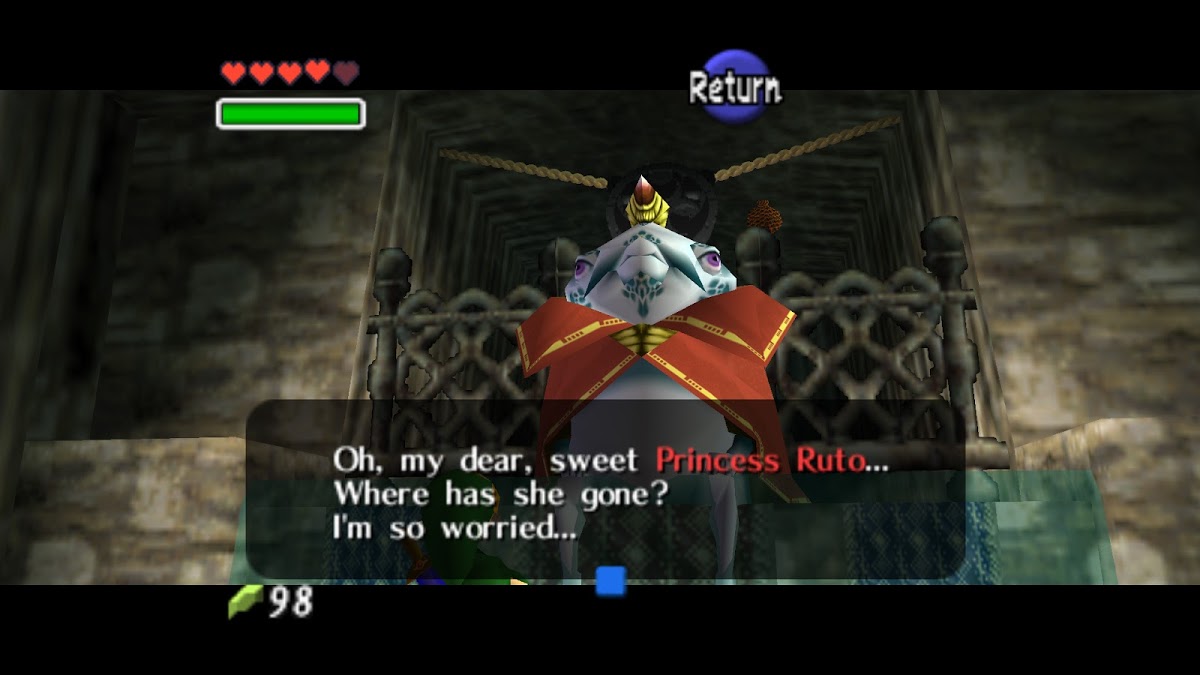 Kudos to the game for this being the only dialogue on him, though. He says nothing else. Not even a hello. Just straight to the point. Now we know what we're doing, time to help a King find a Princess.
Already found one Princess, dammit. Time to go and see why there's no one in this ghost town.

(Can't believe I was worried about the puzzle-solving in this game. Just play the damn song every time.) 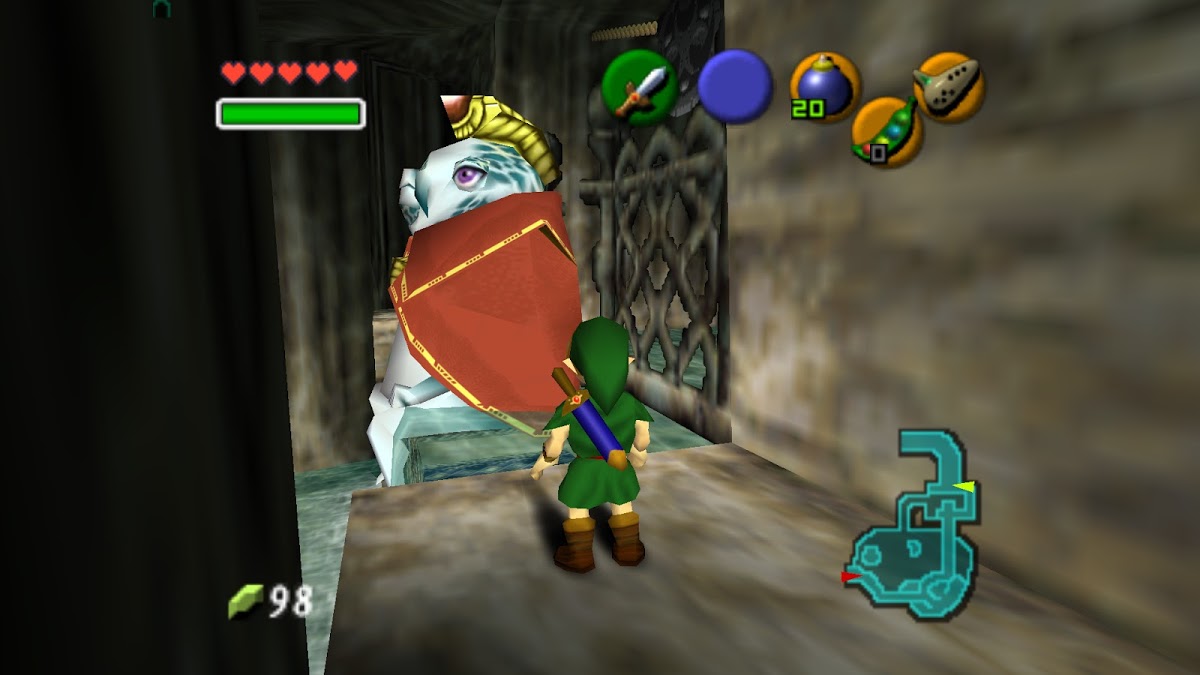 Next time! Will we see King Zora's back? Who knows!