We got our quest of Finding the Princess 2: Find Better, but first, we got a whole new town to explore!

Because I was a little creeped out the first time I wandered through this place up to the King because I didn't see a single person in this cave--Just a lone King in an abandoned Domain.

And then I walk back out and see this. 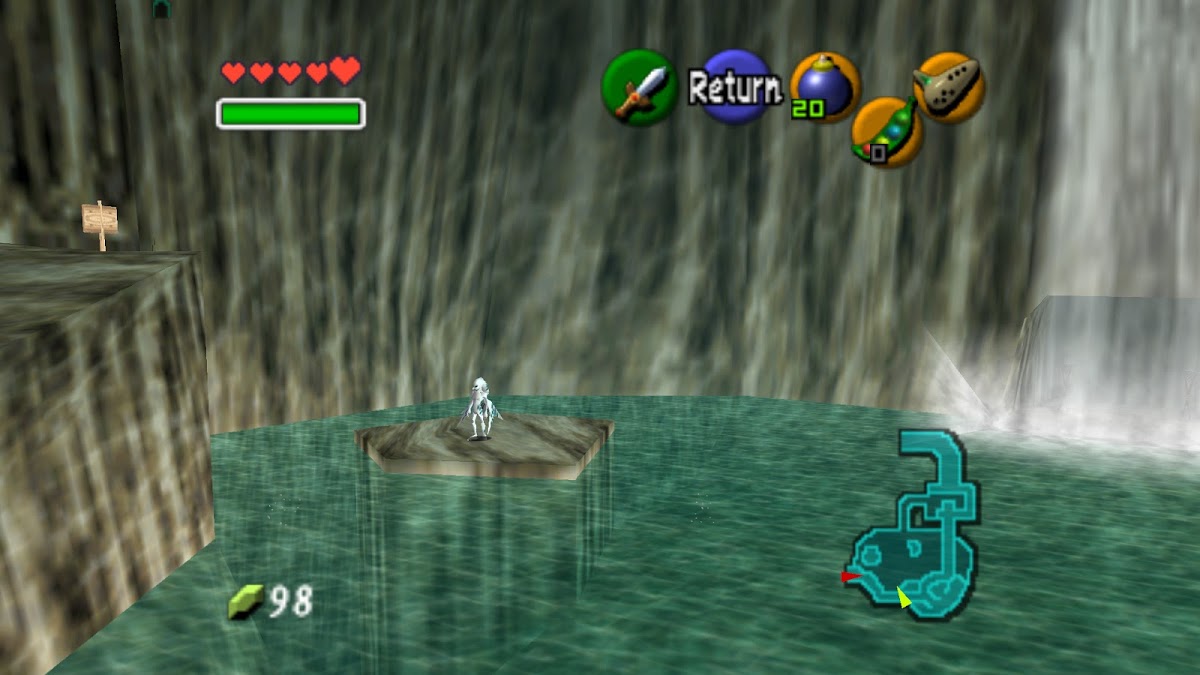 This... Pokemon (?) in the distance, but I go backwards down a passage and see this to my left. 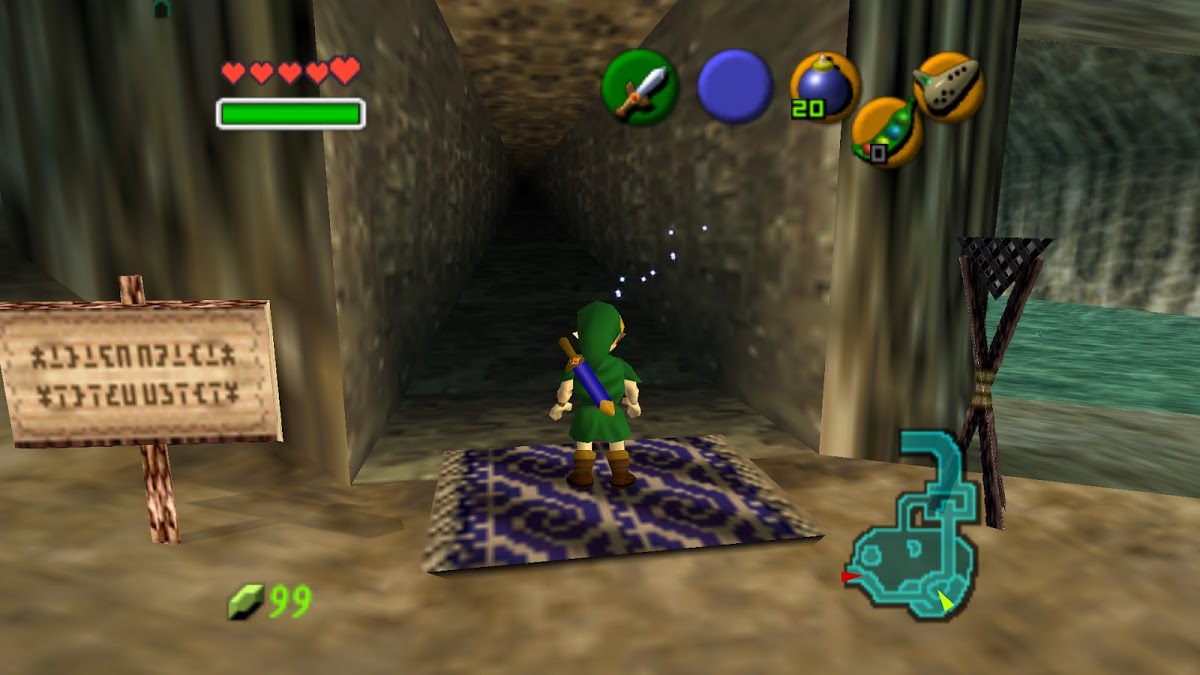 The sign says "Shop"... I'm not sure so I want to go down this never-ending tunnel to "shop".
So instead I go further to get to the lake and swim over to the Pokemon: 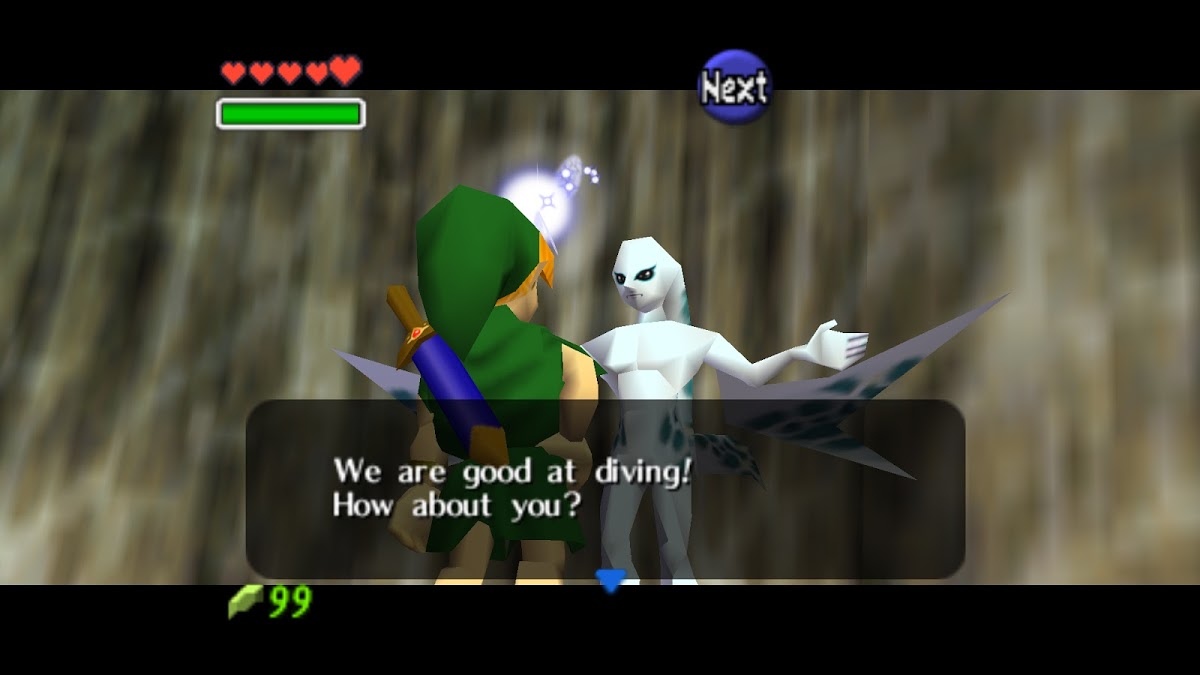 So, apparently, these people are all around, and are the titular "Zora's" of the Domain I'm in. The trick is just, they're swimming, most of them, and only come up to the water-surface when I come close, which is sorta neat, and as I explore I find a lot of them and they talk about what's going on.
One of them in particular talks about this "Lord Jabu-Jabu", who's apparently their local deity, and whom Princess Ruto was in charge of feeding morning, midday, and dinner.
So is this some sort of Broken Age situation? They're feeding a monster to let them live? (There must be an earlier reference point than Broken Age for this but couldn't think of one...)
I go more around and talk with everyone but they don't have any idea where Princess Ruto is and instead just want to talk about themselves (typical).


So with that I still have no idea where to go, so I go back up and take the infamous Diving Challenge atop the waterfall in the city, which, I'll apparently get something from doing.
Up there is a Zora who throws rupees into the lake below and I have to dive down and get them before the time runs out...
which was really easy. So, pretty happy with that, I go back up to get my reward and it's this! 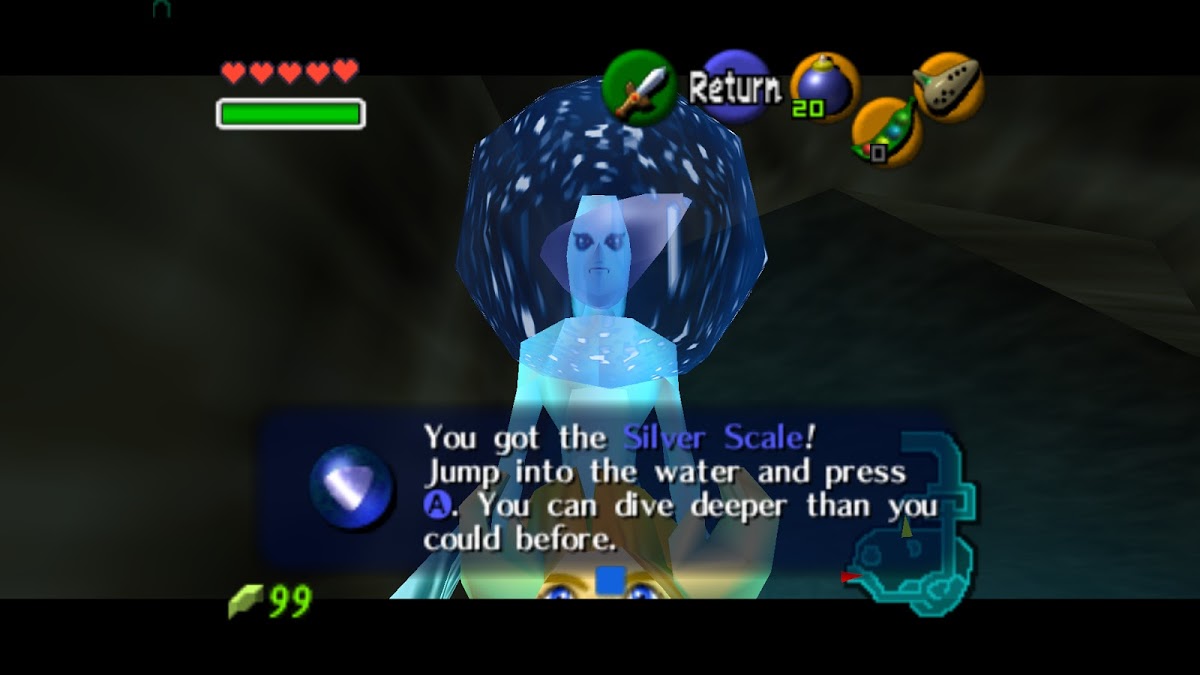 Wee! I always wanted to dive...deeper? I guess.
Now instead of diving 3 meters down, I can dive... 6! Wow! What revelation!
But actually, that is pretty useful, because it means I can reach down to the tunnel underwater I couldn't before (of course it does, this is a video game), so I do and end up 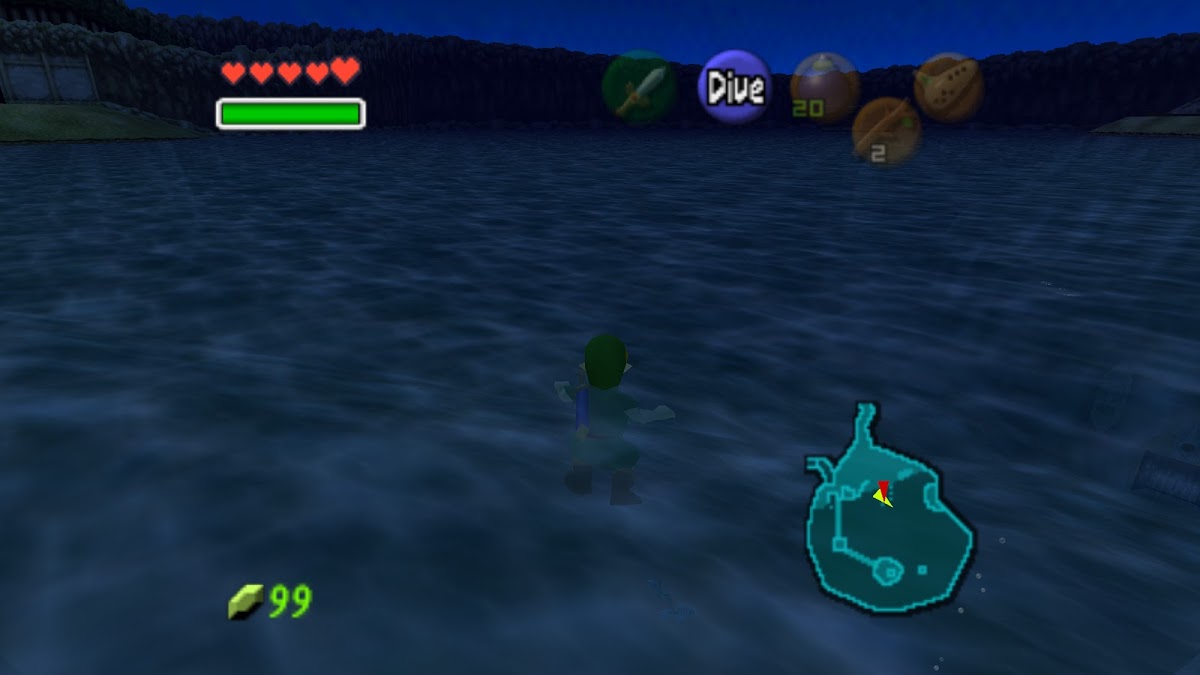 Here? At "Lake Hylia", apparently. Which, when you look at the map, is at the other corner, literally across the entire forest, so I just swam underneath my entire home just to end up here.
But, wait, look! There's something in the water! I use my newfound powers of diving slightly longer and get another empty bottle! 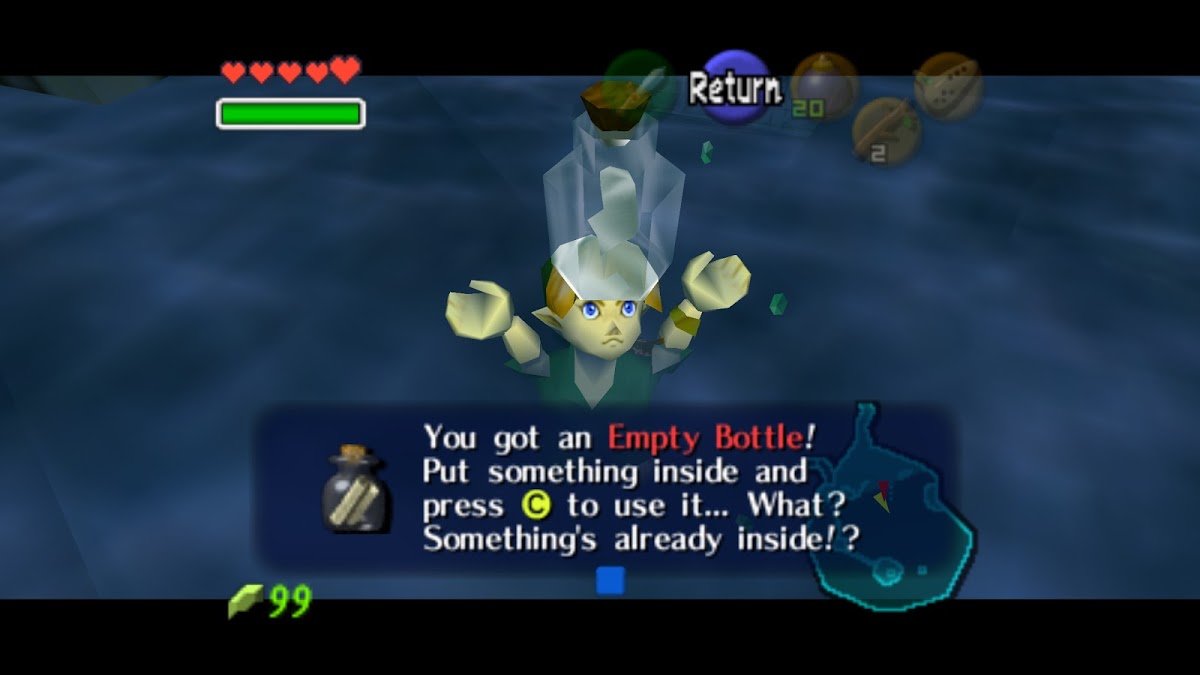 Because you can't open bottles when you're swimming I swim to the shore and take a peek inside. It's... a letter, surprise, but what it says is, to say it mildly, a plot twist: 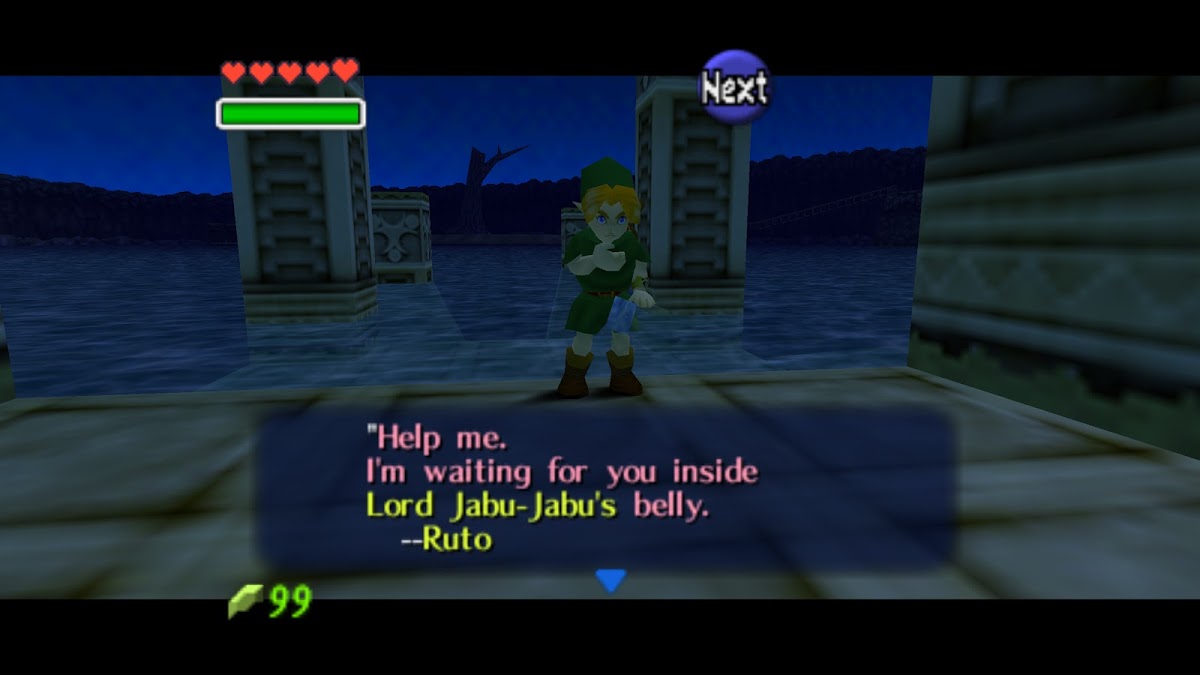 Wait, what what the the fuck fuck?

And then I click, and almost skip the last part of the letter which says

Wait, so she's running away from dad? Inside a god? Sure, weird fetish, there, but okay. I mean, who am I to say what you wanna do with your rebellious freedom.

While mulling all these questions over, I explore the Lake a bit more, and find quite a few interesting things. 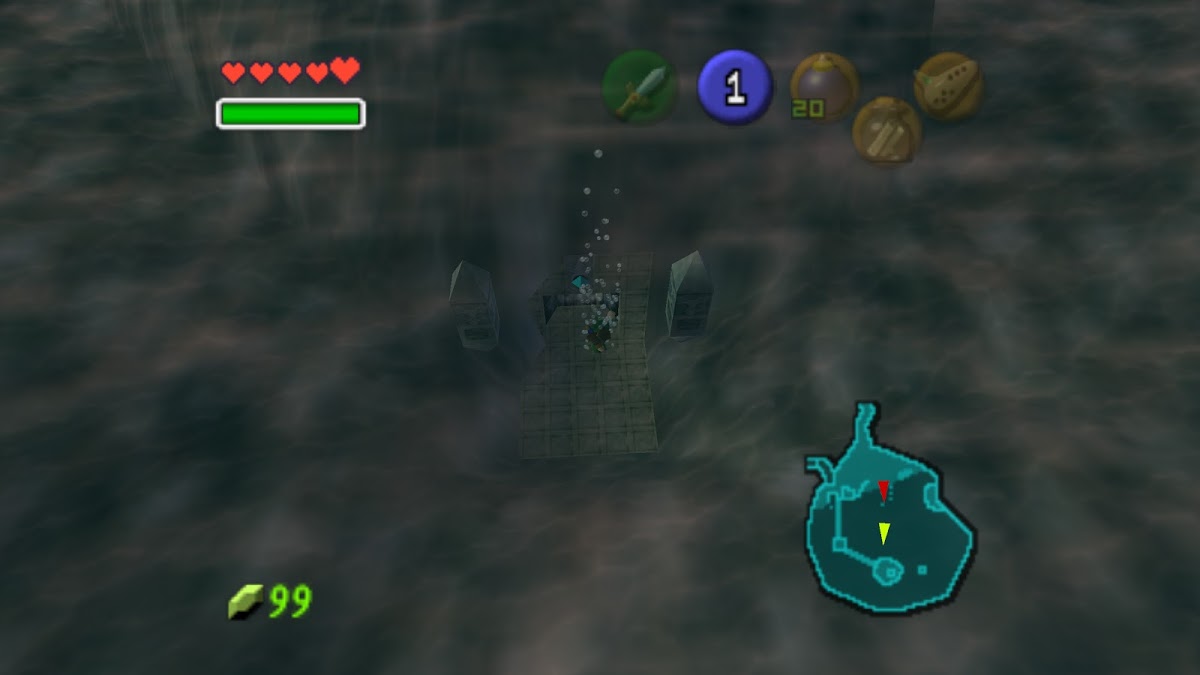 1: This underwater entrance which I cannot reach yet, but that owl-dad (oh yeah, he showed up again, queue the music and all that) says is the "Water Temple". Oh, I've heard about that, my friend! Not in good tones!
But that's not for right now because I also found

2: A Lakeside Laboratory with this fella inside 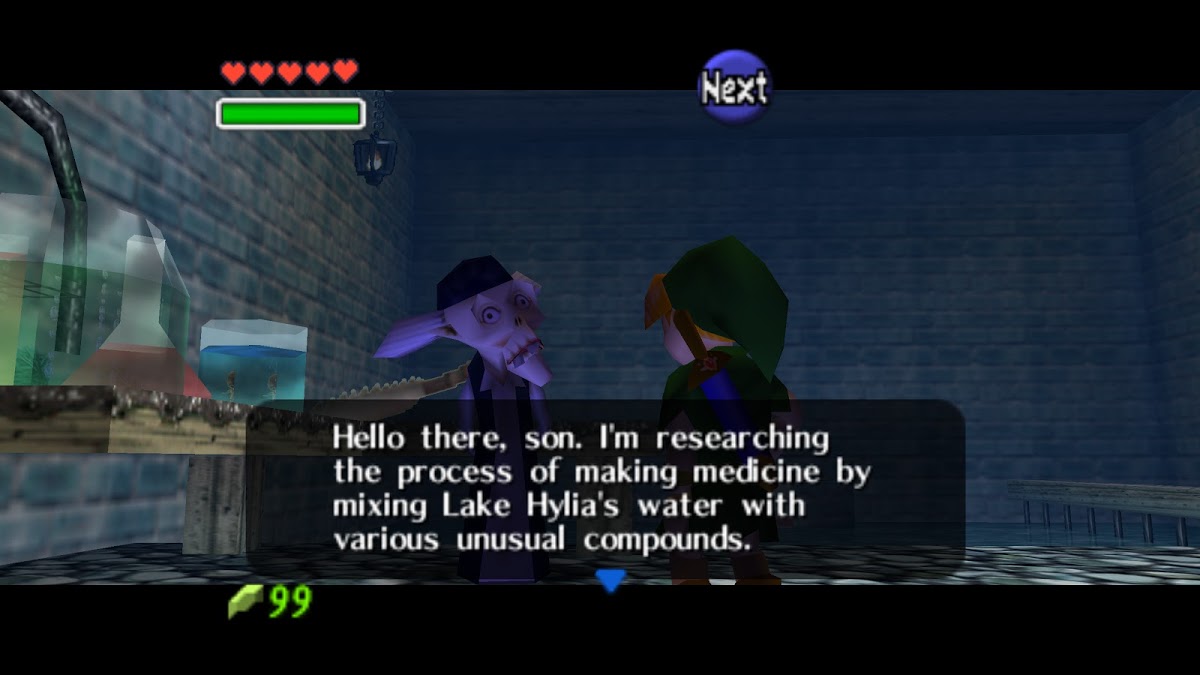 and a diving tank with a large ruler, as if measuring how far you can go. So I use my Powers of Diving to not reach the bottom and I go up and talk to him again. 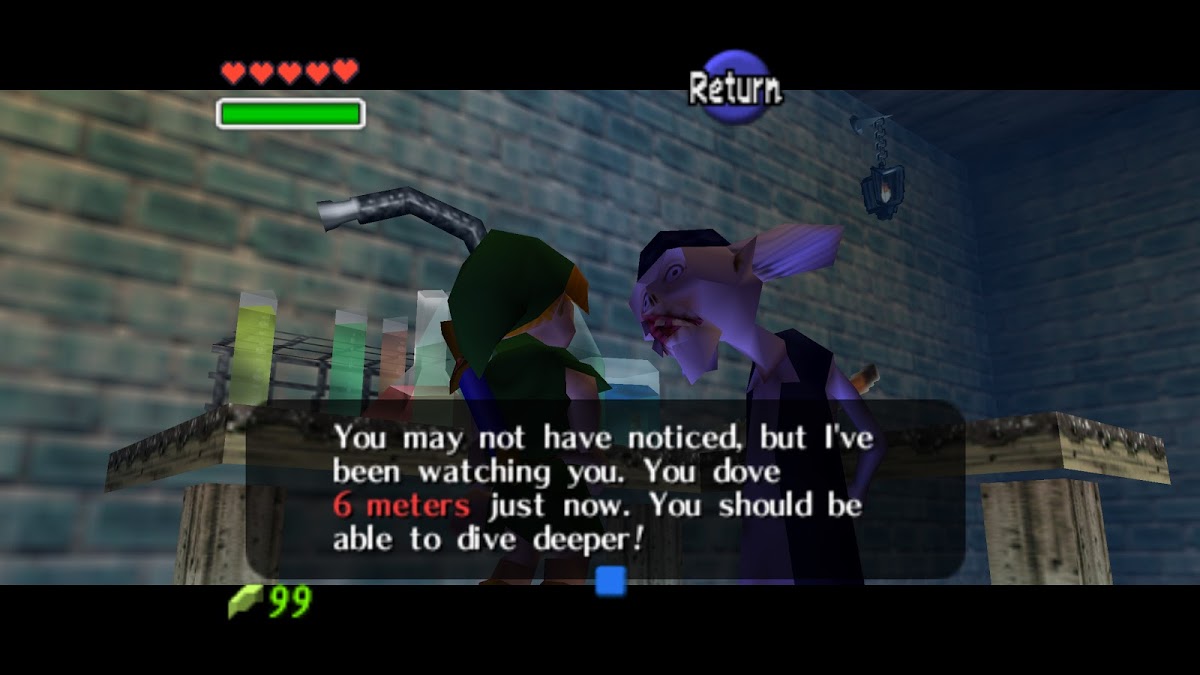 Well, gee, would love if you taught me how!

3: These scarecrows next to the lake 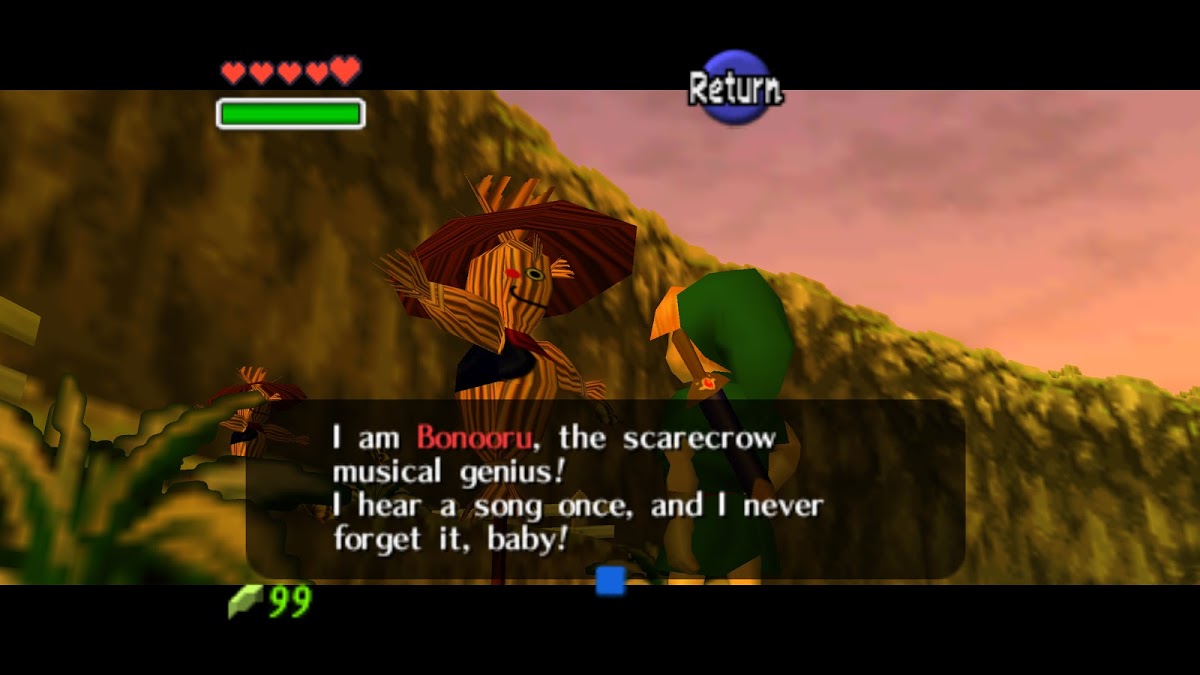 You say that, do you! Well, I got just the song!
And then the moment I pull up the ocarina, he goes all 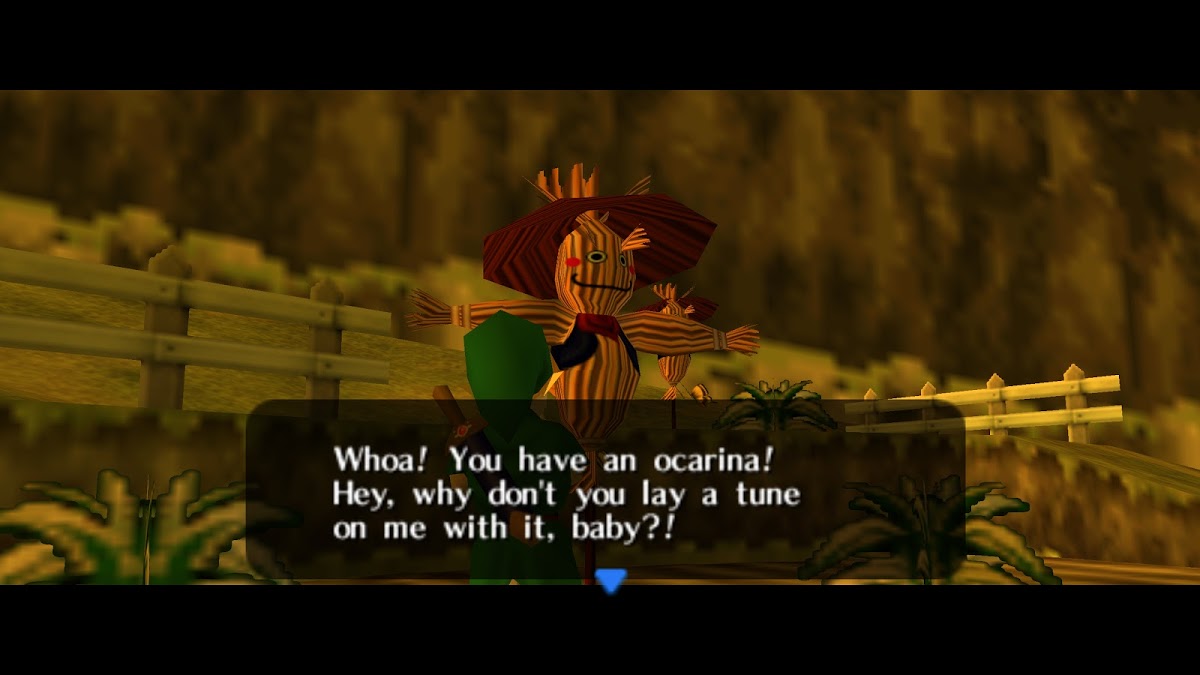 That's what I was about to! 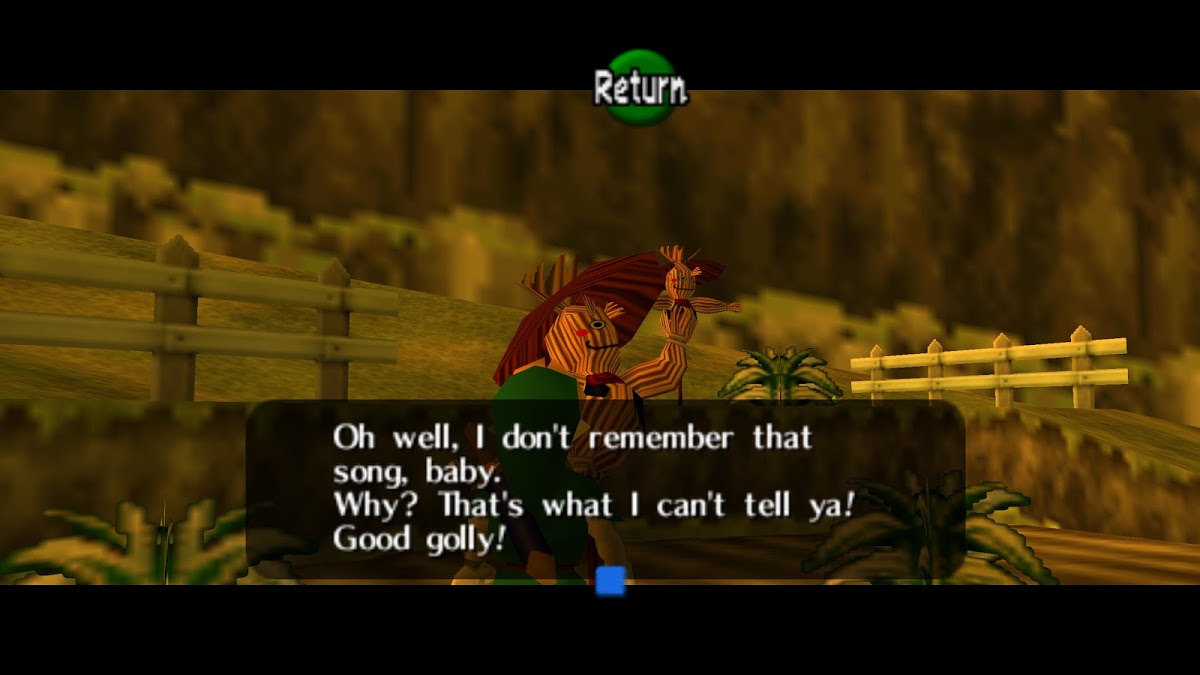 Some musical genius you are. If you actually remembered this song you'd be The Richest Scarecrow in Hyrule with the amount of access this thing gives. Kingdoms, I tell you!

4: A fisherman's hut where I can go fish but I have NO interest in doing that so I nope outta there and head back to Zora's Domain.

Because that lake had no further answers, I'm more than a little stuck and wander until I strike up conversation with one of the Zora's again who tells me this: 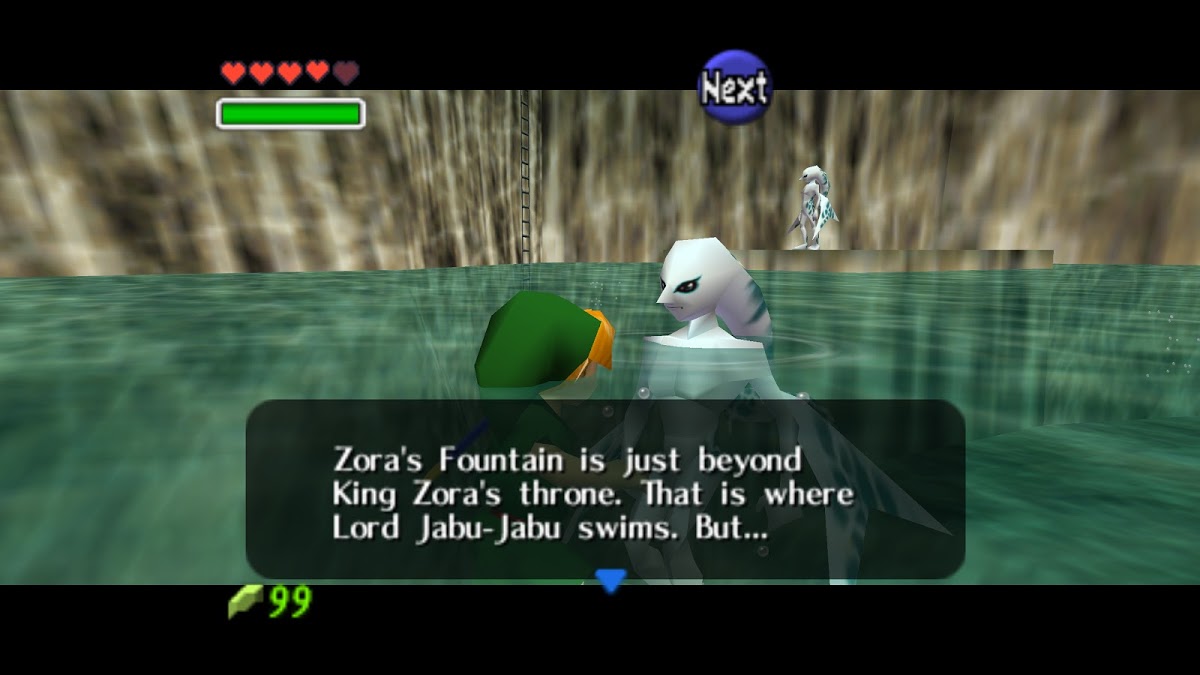 Oh, so he's behind King Zora, but I'm not allowed to tell King Zora about it... Well, gee, that's quite the conundrum!


So, let's go back up to the throne room and see if I can find some sneaky way of getting past him.
I can't. There's no way behind his giant body and the fence is way too tall for lil' me to do anything, so I'm stuck again. I talk to him to see if there's maybe some way I can trick him into letting me past, but no, he just blabbers about the Princess again and does nothing, so eventually I do what I don't think the game'll let me and Link pulls out the letter from the bottle and proudly presents it to the King: 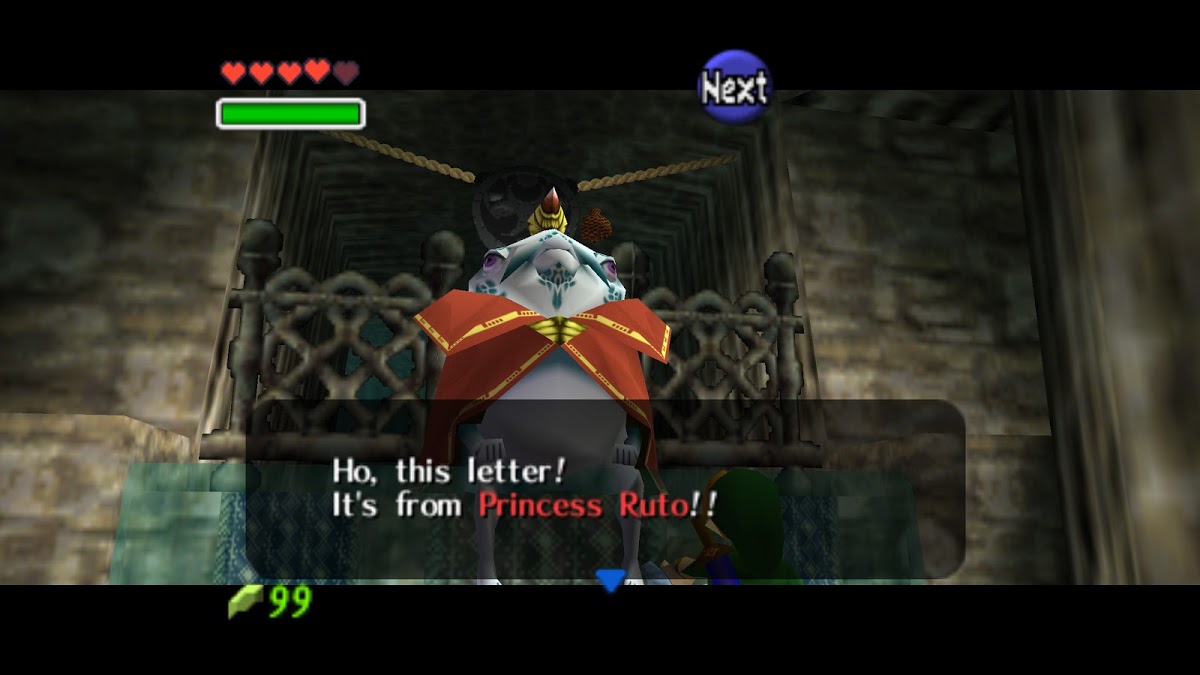 
Like, what the hell! That's the way to solve this? Just, tell the father? Sure, I guess. Christ. Hey, give teenagers some room, okay?
I can't believe that's the way this is supposed to go. That's crazy. This whole game, we've been the kids outsmarting the adults, they've all seemed goofy or dumb or silly but the first time we're even suggested to hide something from them, we go straight up and tell.
wow.

Okay, to add a little more nuance to all that: I get that there sometimes can be good reasons to Tell The Adult, but I mean, maybe talk to the girl first? At least? Maybe she doesn't want to be feeding this fish-monster every day? Maybe the King should cut her some slack? Who knows! That's my point. We don't know anything about their situation, and Link just goes up and tells him without knowing the repercussions. Like, well, like.. Link, I guess. I guess it's right on character.


What a strange message. Like, compare this to how Zelda hid from them all in the beginning of the game, and spied through a window when she wasn't supposed to.
Give me a game where I play as Zelda. Damn. 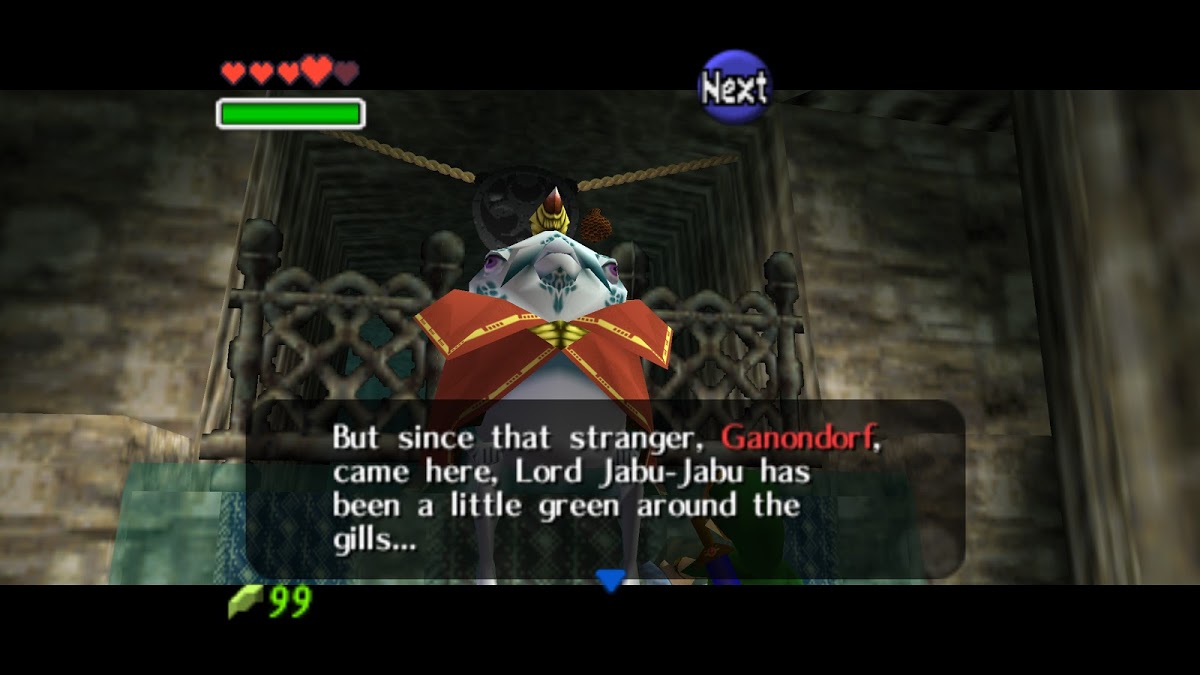 Oh, what a surprise.

And then King Zora moves out of the way. 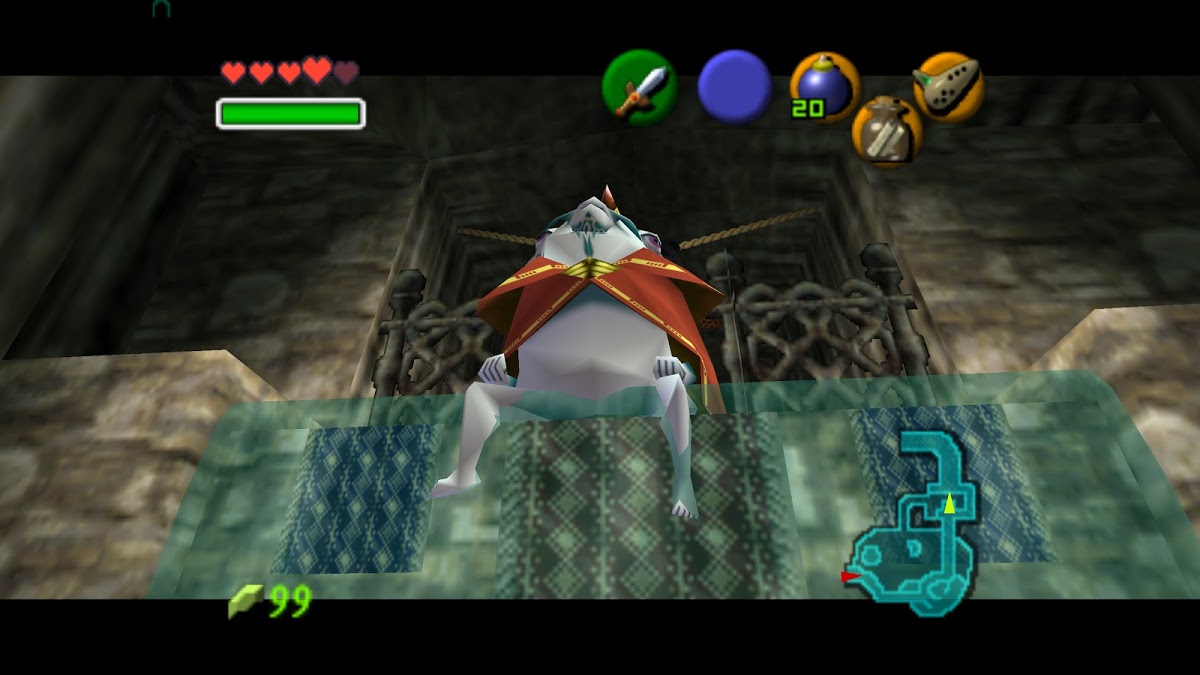 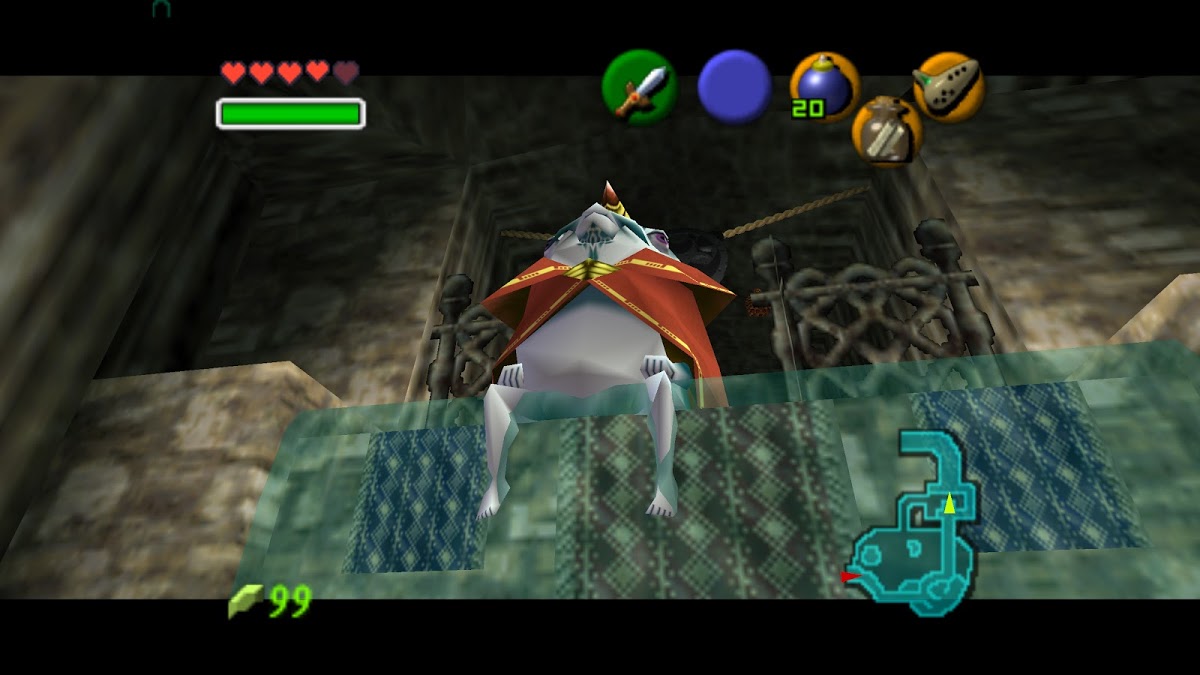 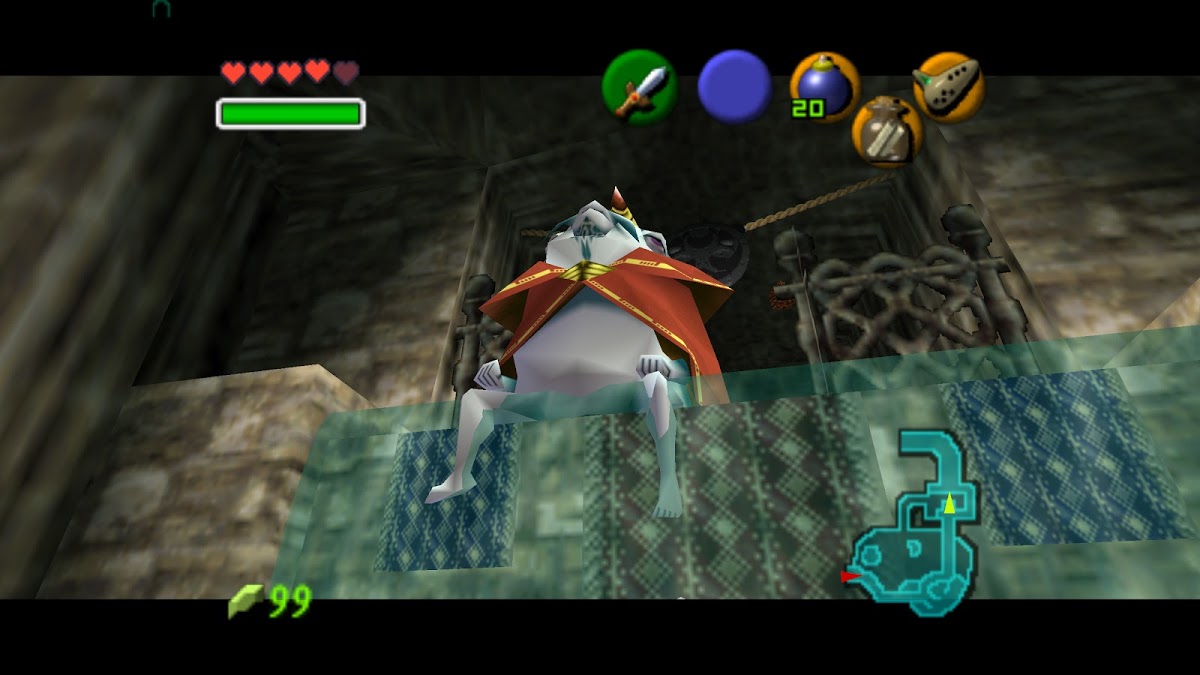 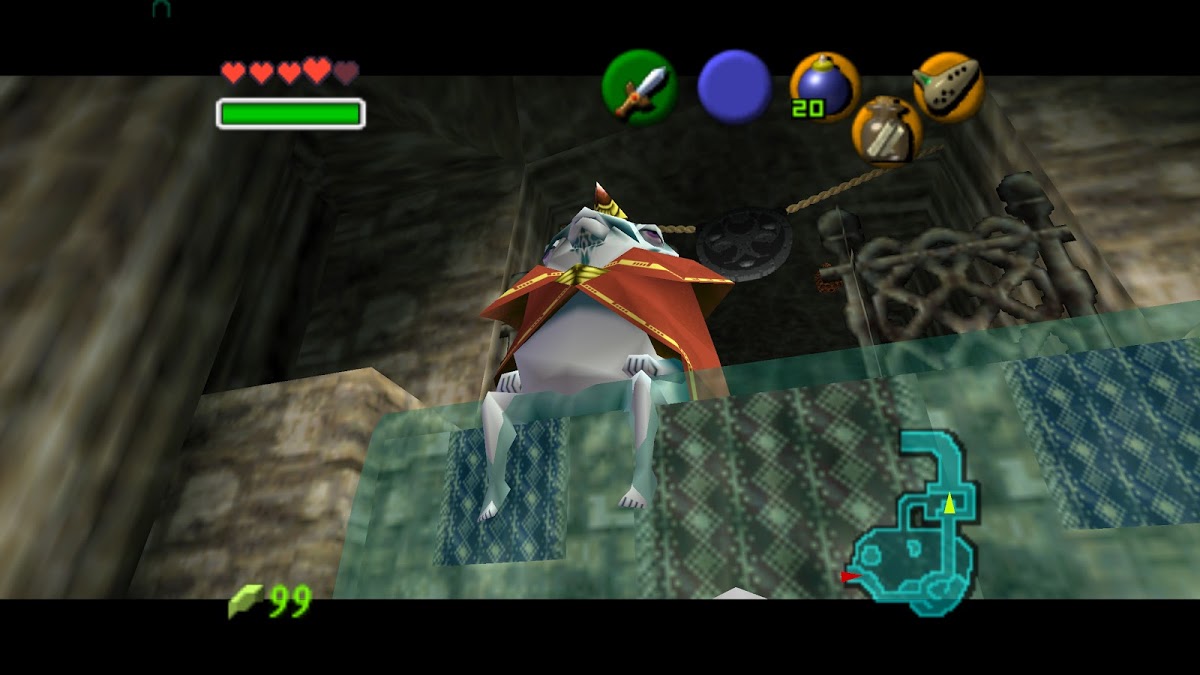 And was pretty funny. Because it made this squeaking sound every time he moved. Here's a gif

Which is way faster than he did it, but is also pretty funny. (Put this to a matching beat).

So, now, with our reputation intact, we can go inside this Shadow of the Colossus monster! 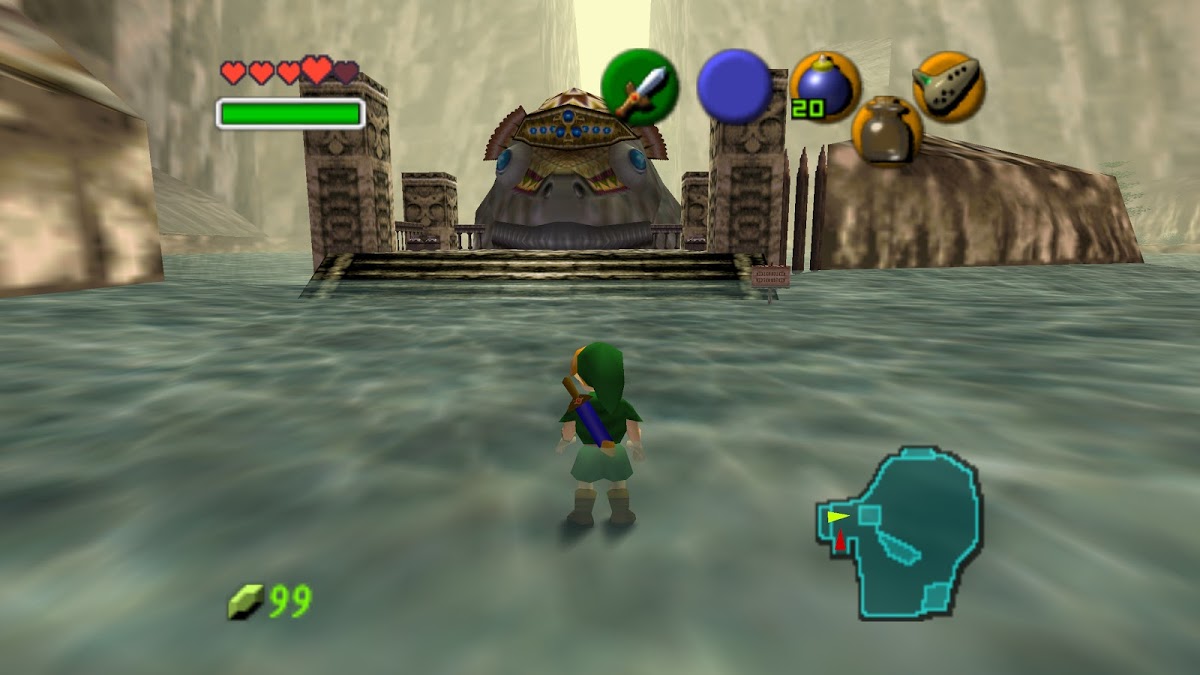