I apologise in advance for the complete lack of progress made in this episode. You have been warned.

We left off in a bit of a precarious state where a princess throw crashed the game, so I was a little wary about it all this time. But we get to the princess and pick her up and go for it again. 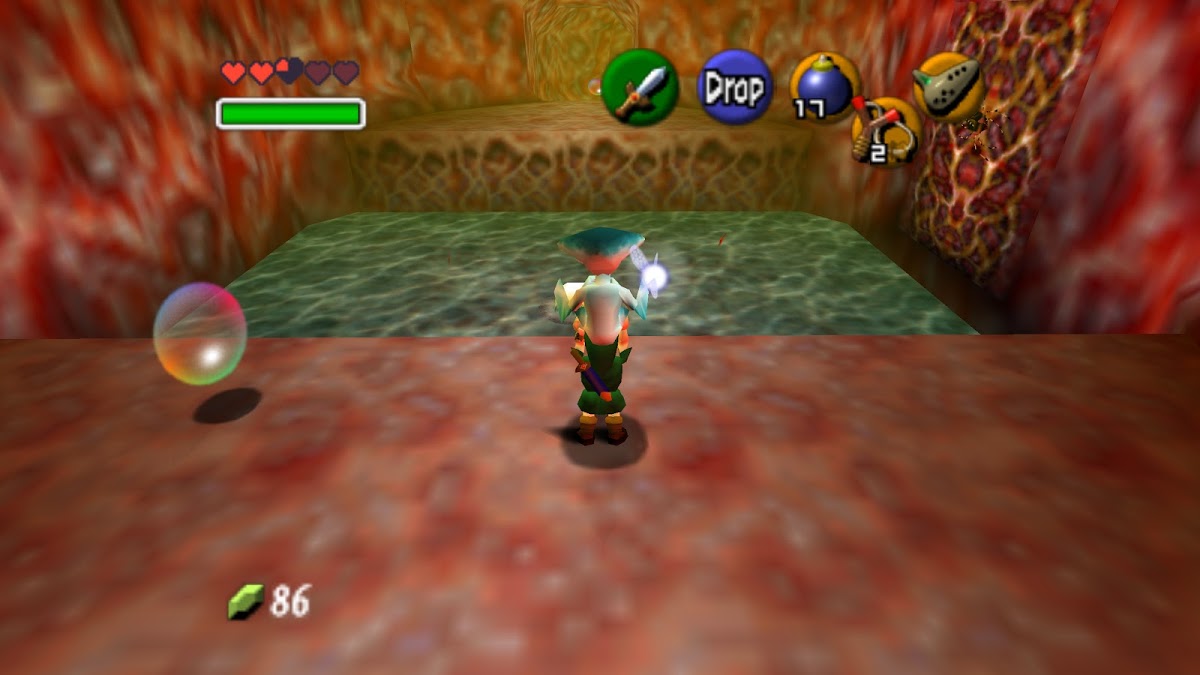 Beware all who throw into this water.

So I line it up again, carefully getting the angle just right, and throw her with all the panache of an eight year old boy and she lands... just behind the button.
But the game didn't crash! Progress!

I jump down and consider this a failed attempt so I step on the button and she disappears again.

Right. I realize that plan won't actually work. Because it's the rising water that causes her to disappear, not that I'm holding her while it happens. So... yeah, no I can't throw her.

I pick her back up again and look through my options before again confirming that this is the only way out with her, so there must be some way to do it.

I jump down with her into the basin, waddle across to the other side and test out the height of the throw. 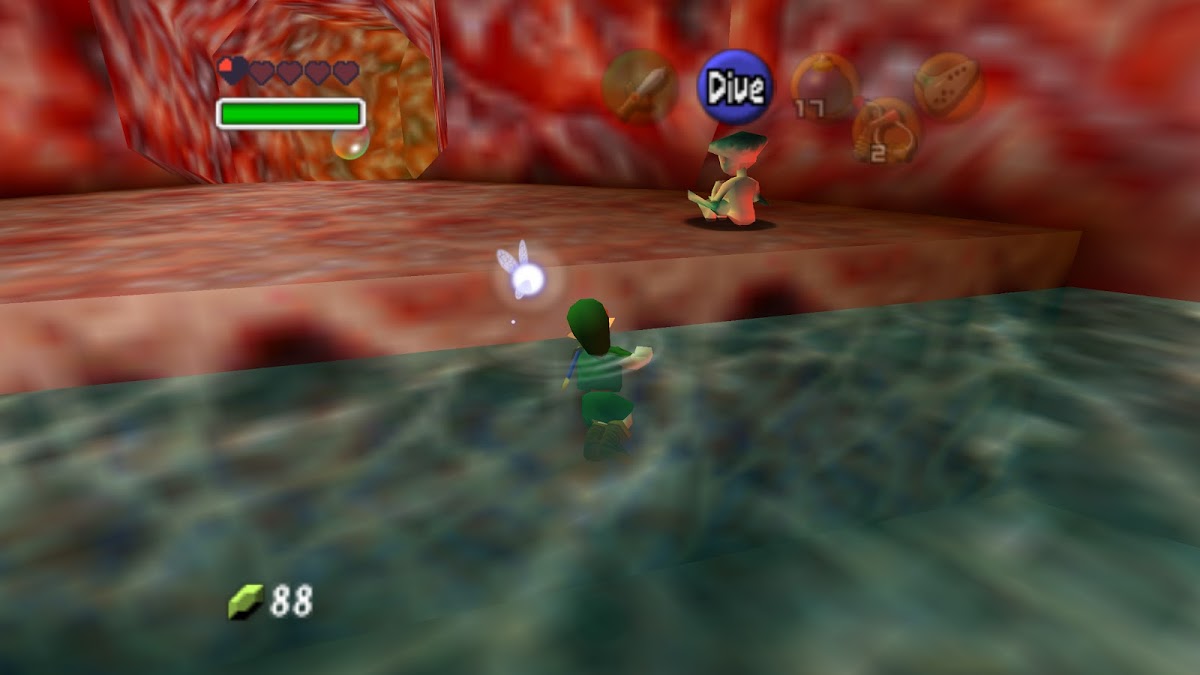 (I've already raised the water in this screenshot)

Oh. Just throw her on top, yeah? Well, shit. The game really did want me to throw her.
Scraping past the monsters I don't want to fight, I push the button and swim up to her, pick her up and walk through the tunnel with her. However, I have to put her down again to slingshot the glowing thing to open the door, but as I do so I get hit by the silly bubble things a couple of times until I'm down to a quarter heart.
I hit the thing, but unsurprisingly, I get hit again. 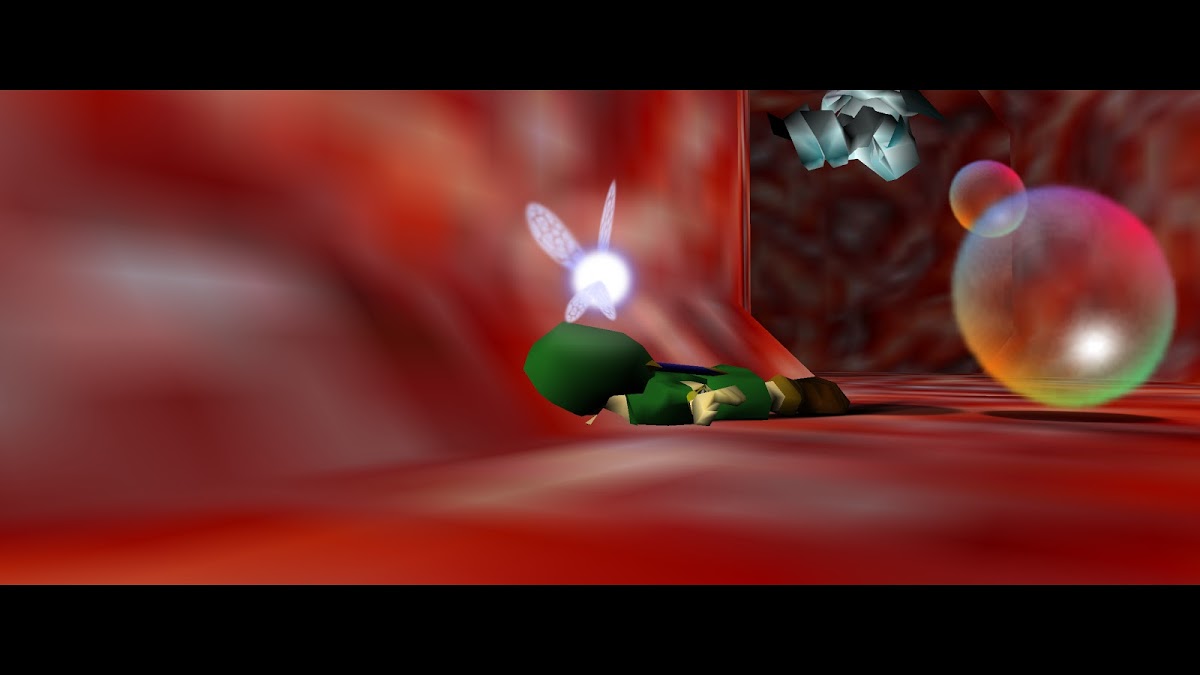 And dead. Restart.
The problem, though, isn't the starting over, but that my items are forever lost. All the slingshot seeds I used in the dungeon, I'm not regaining (this is Demon's Souls, actually??), so I have 1 slingshot seed left.
And I need at least 2, but probably more. I'd hoped I found some in the dungeon but so far no, this tummy only holds magic potions and rupees (odd diet), so I'm actually locked out of progressing until I get some more seeds.

So, goodbye Jabu-Jabu's Belly! Back to Zora's Domain and buy some in the shop!
Right? That's all we need to do. 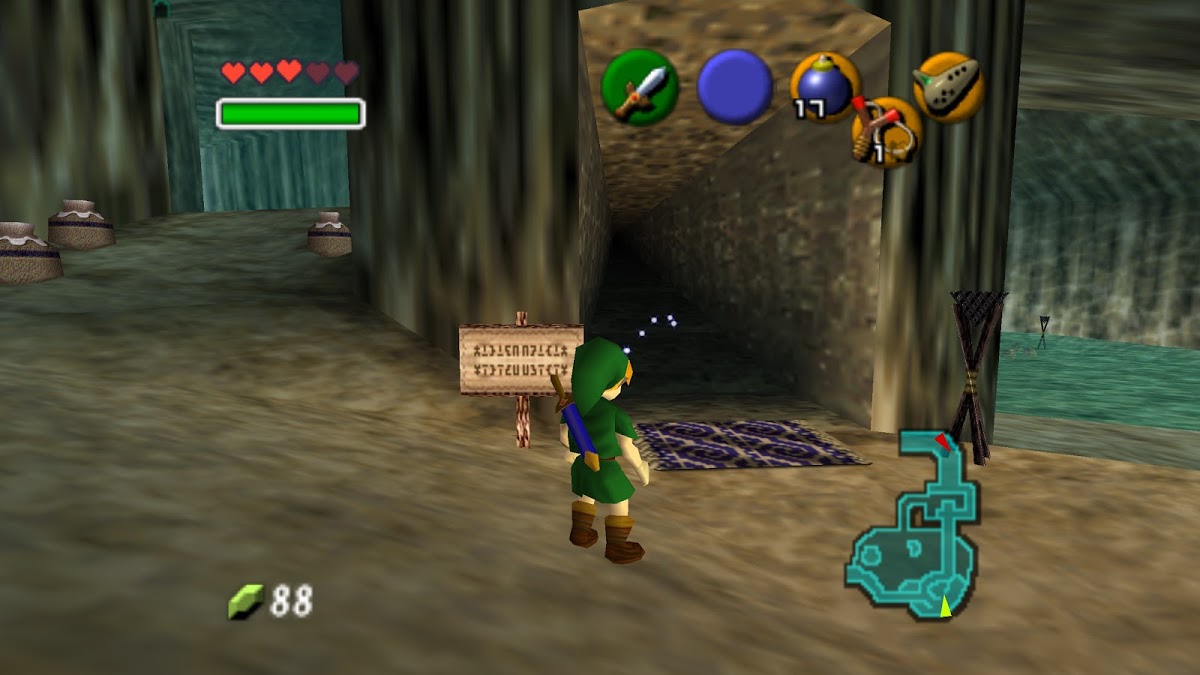 Back to the scary tunnel of shop! 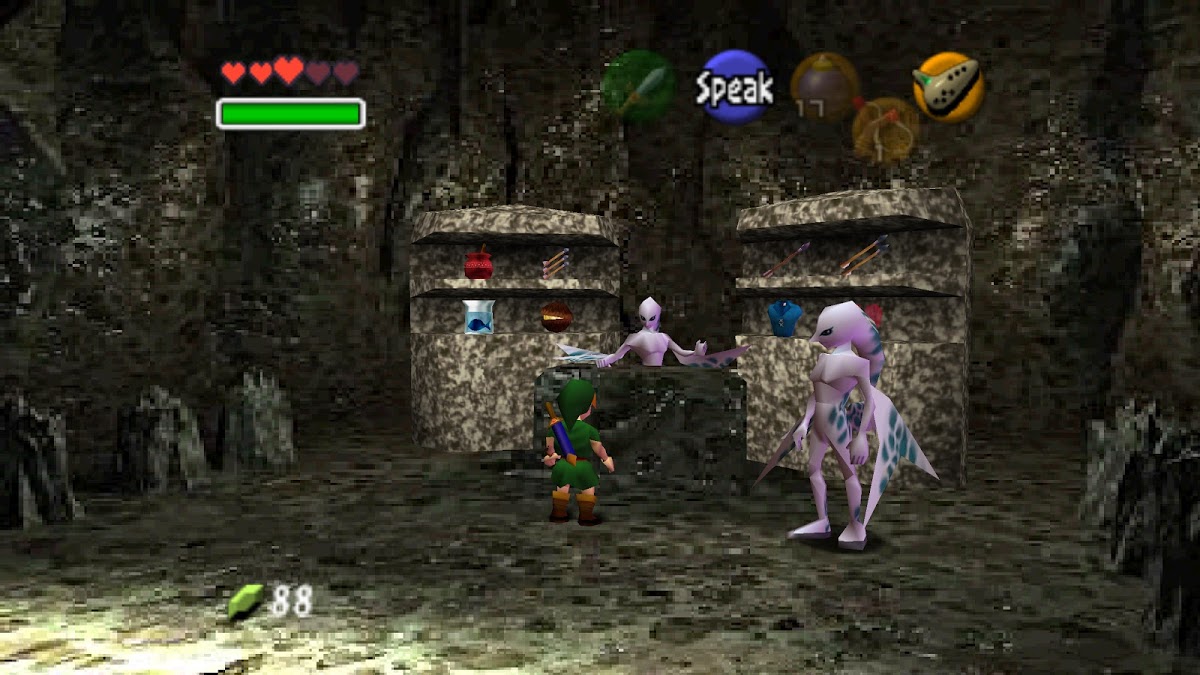 Uuhhhhhhh... whaaaa. Like what you've done with the place! Very... retro.

Guess what, they don't sell seeds. Shoulda known it wouldn't be that simple.
All right, going out of the shop again is a couple of pots to get random items, and they sometimes drop seeds, so I smash away and walk out and back and smash again, but no seeds. Ok, fine, guess this water place doesn't have Deku seeds. Annoying.

So I gotta get out, and think a bit about the best way before remembering the underwater tunnel to Hyrule Lake. If nothing else, I should be able to get back to town from there.

I swim and on the way find a bunch of bushes, which gets me all excited.

Look.
I have a thing for bushes, ok?
Just, list--
No, what? No, I'm kidding, chill. There's seeds in bushes. That's why I was excited. Of coouursse. 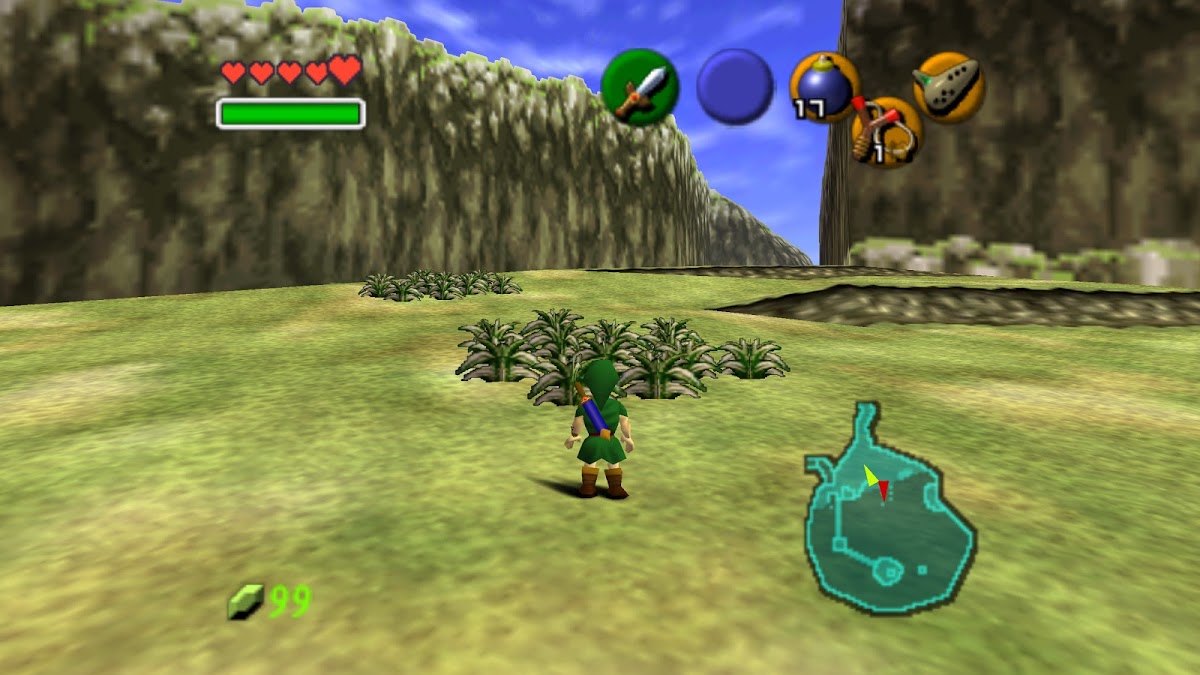 Look at them beauties. All leafy and small an--I'm fine, don't ask.

I slashed all the bushes and found... 15 seeds. Which is about half of what I needed. So, great, that seems like a slow and arduous process, back to the original plan: To the town.

I venture north up to the entrance to Hyrule Field, and swing to the owl jazz for a bit before I'm out to the field.

I've never entered it from the south, and man, I was lost at first. It's a fairly big area (not compared to today of course, but I can imagine in 1998 this feeling enormous and cool), and then I saw this thing just floating in the air: 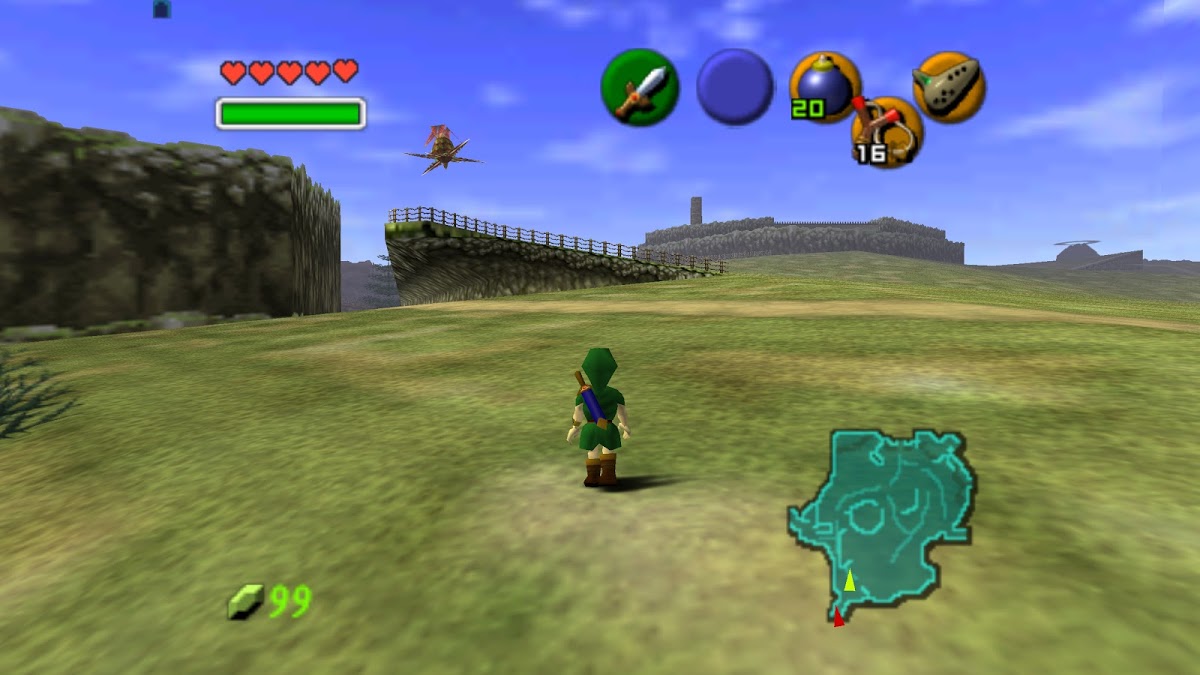 And some other flower-hut-things on the ground that moved and sprung when I got close and I was a little overwhelmed out by the whole thing so I ran back to the town I knew.

So back in the town I do a shop run to find if there is anyone who sells deku seeds.

Turns out, there's not.
Not a one, out of the 4 shops that are there.


First one I go into, though, has a "Hylian Shield" which I remember the guard at "Death Mountain" talking about, so I'm like, fine, I'll buy that for 80 rupees, should still have enough for some seeds.
And boy that thing's big. Just look at it. Blimey. 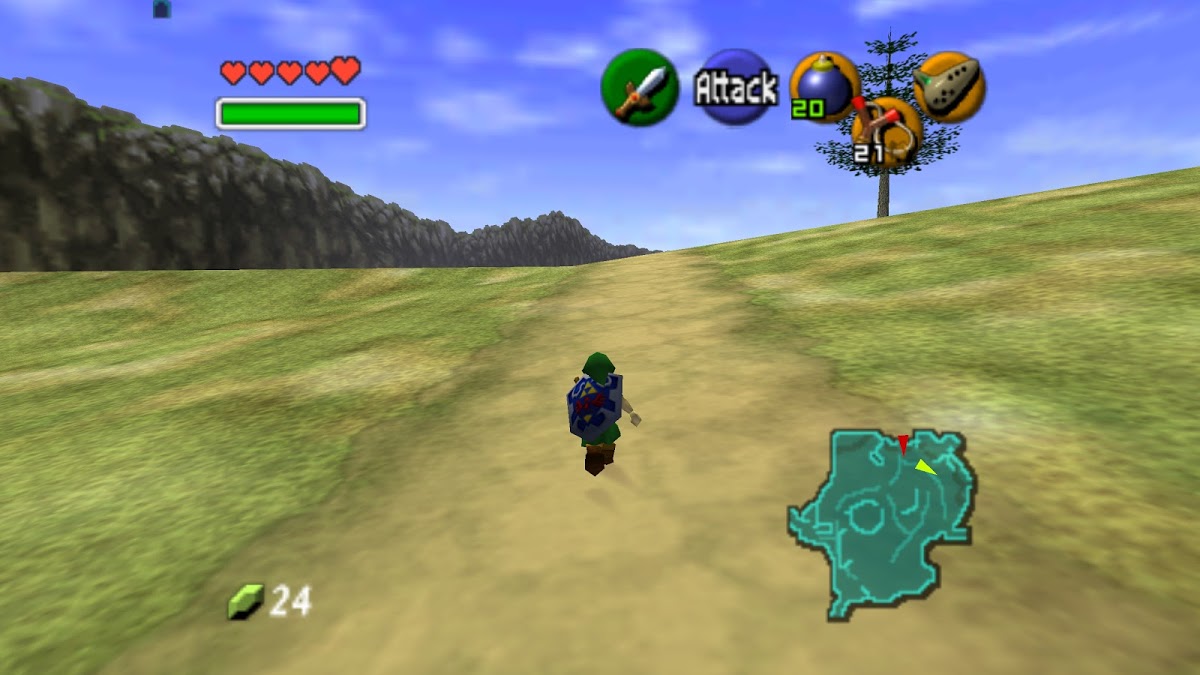 This is, surprisingly, after I left the town again.

And then the other shops there was nothing, and I went into a potion shop, a mask shop, a shooting gallery AND a bowling alley (like what?) and none of them had any seeds! 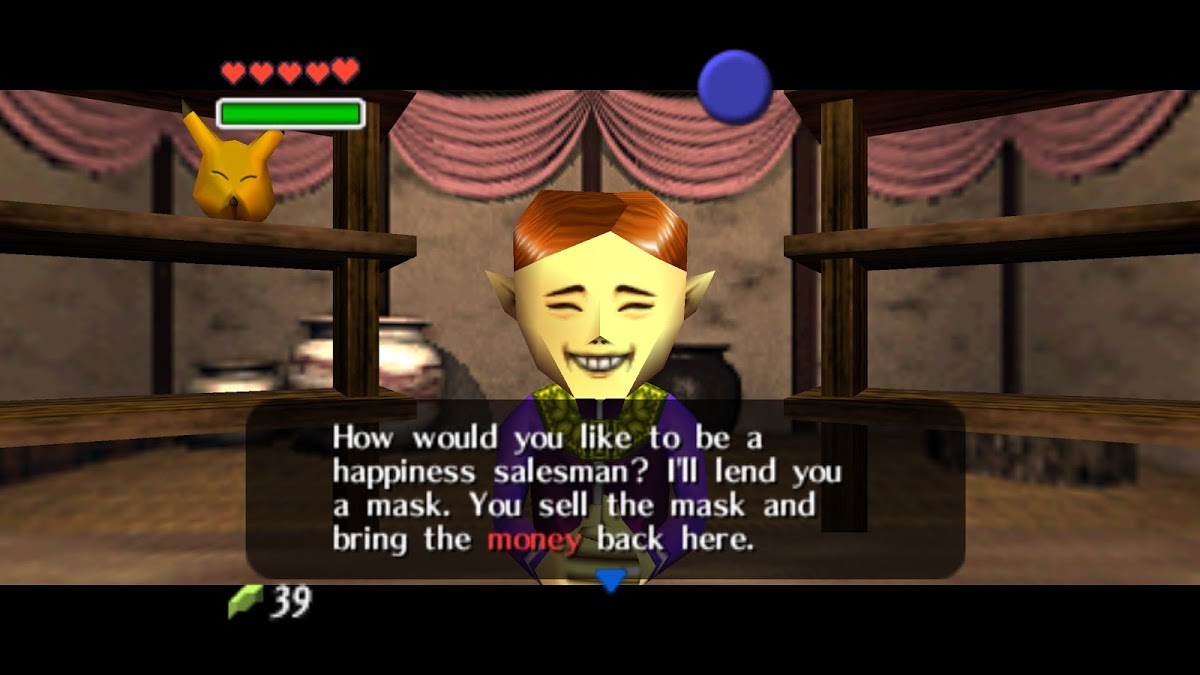 This mask shop, though, is running a pyramid scheme. Huh. (I still got the mask because there was that quest from the guard as well, but like, as if I'm ever gonna finish that one.)

So out of options I go back to the source: The shop in the forest has it! Back to my roots!

I run all the way back there, and sure enough, it has it, but 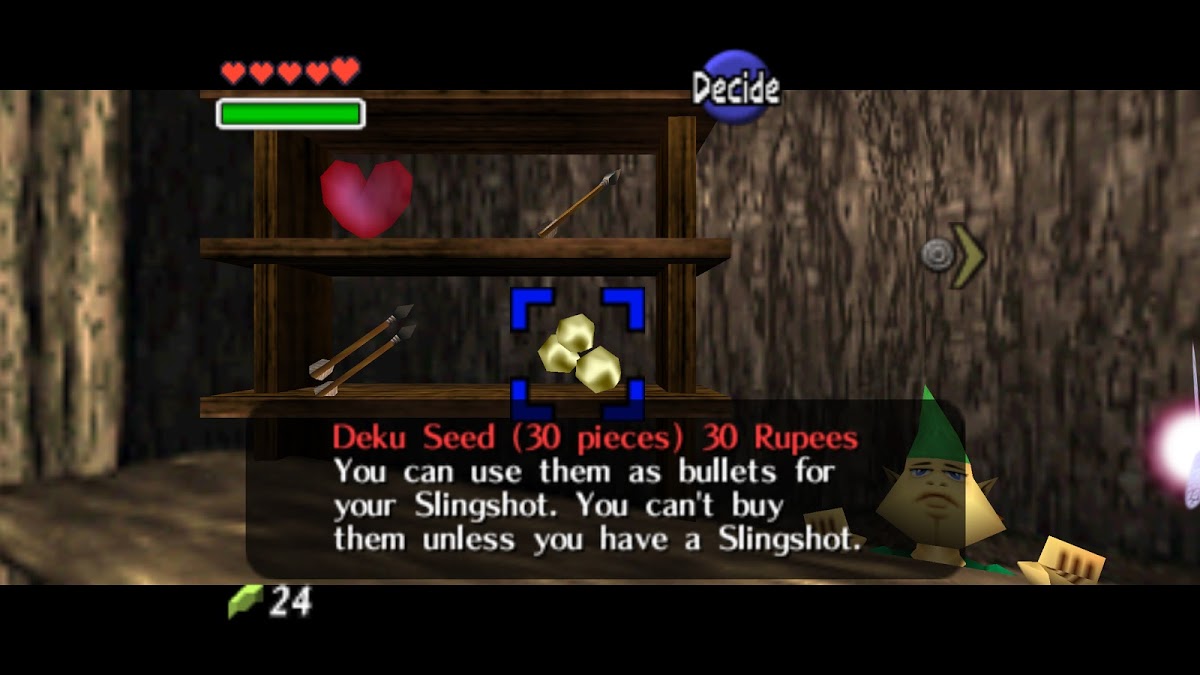 Ok, out to get some rupees, I guess.

But wait, I think to myself, feeling all clever. Maybe I should see if I can get an upgrade to my bag so I can hold more seeds? The limit of 30 isn't great when I'm spending them that quickly, and it seems like Jabu-Jabu's belly is hungry for some seeds.

And I feel like I saw a purchasable bag upgrade somewhere, and there's only one shop I haven't checked yet: The Goron shop! (In hindsight, I don't know how I saw it, actually.)

So, on my way to slash sweet, sweet bushes for rupees I stumble back towards Goron City, but wait. I remember a better path. I know the way, now.

I found my way from and to Goron City to the forest once. I can do it again! I'm a geniu-- 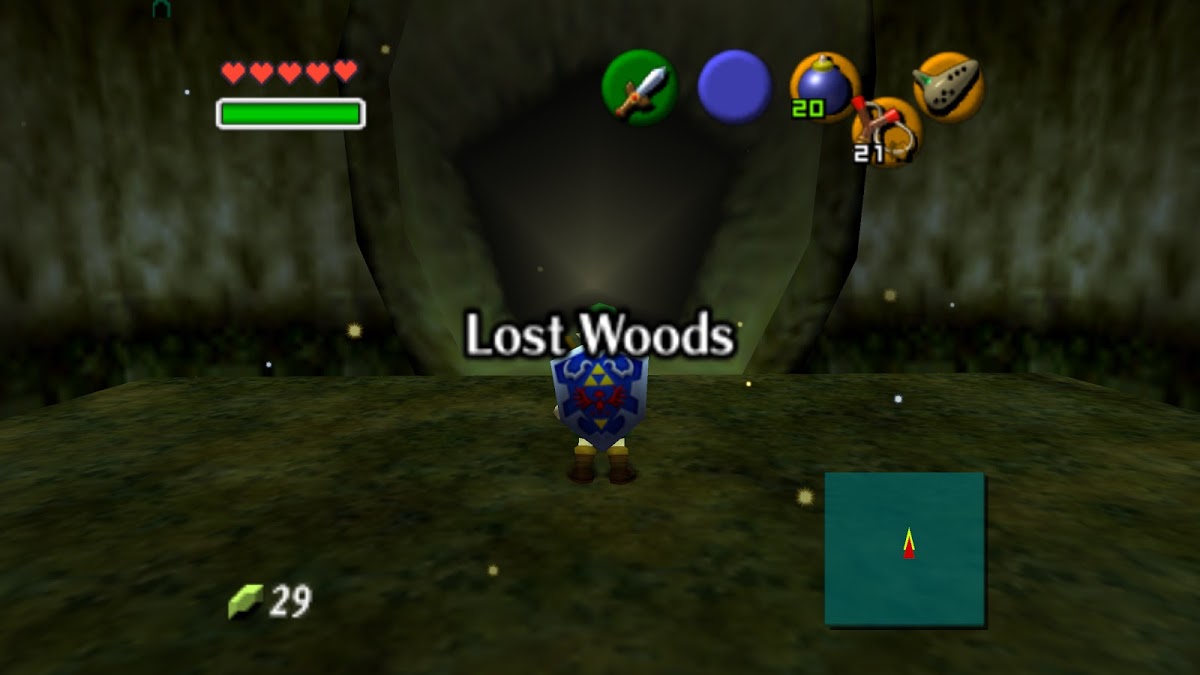 
But where in the hell is the Goron city shop?
I don't remember. Why would I? I've only been there once, and this city is a mess.
So naturally, I get distracted, and find a passage I can bomb my way through since I didn't have bombs when I was here last. 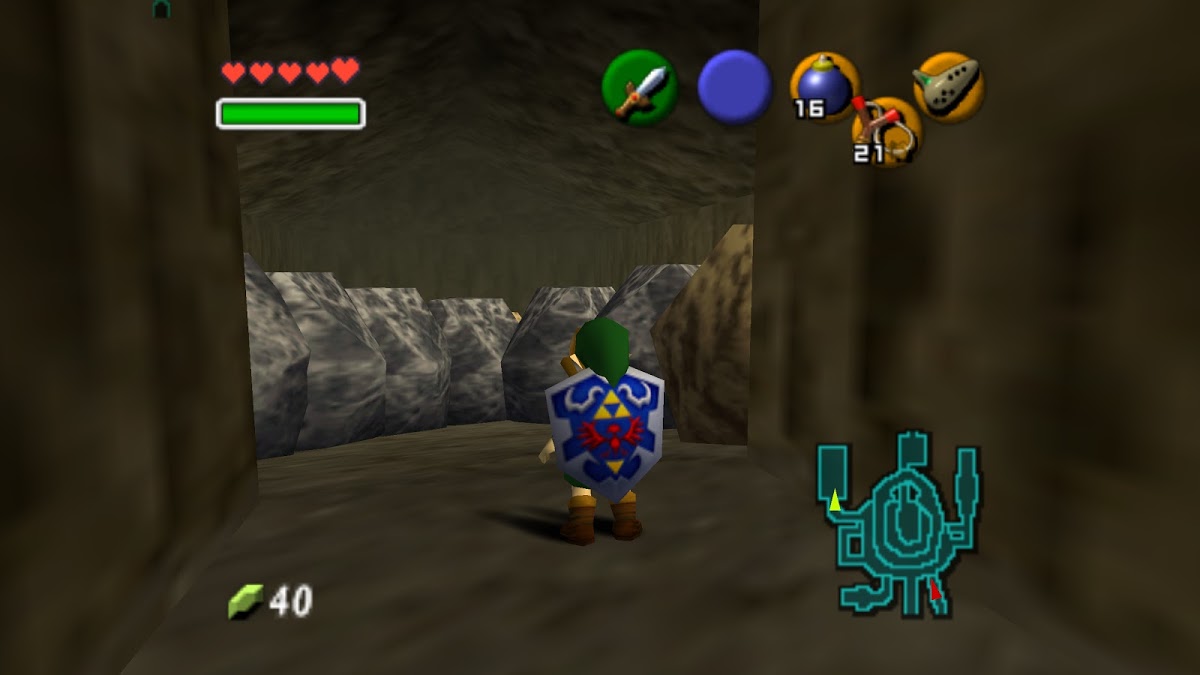 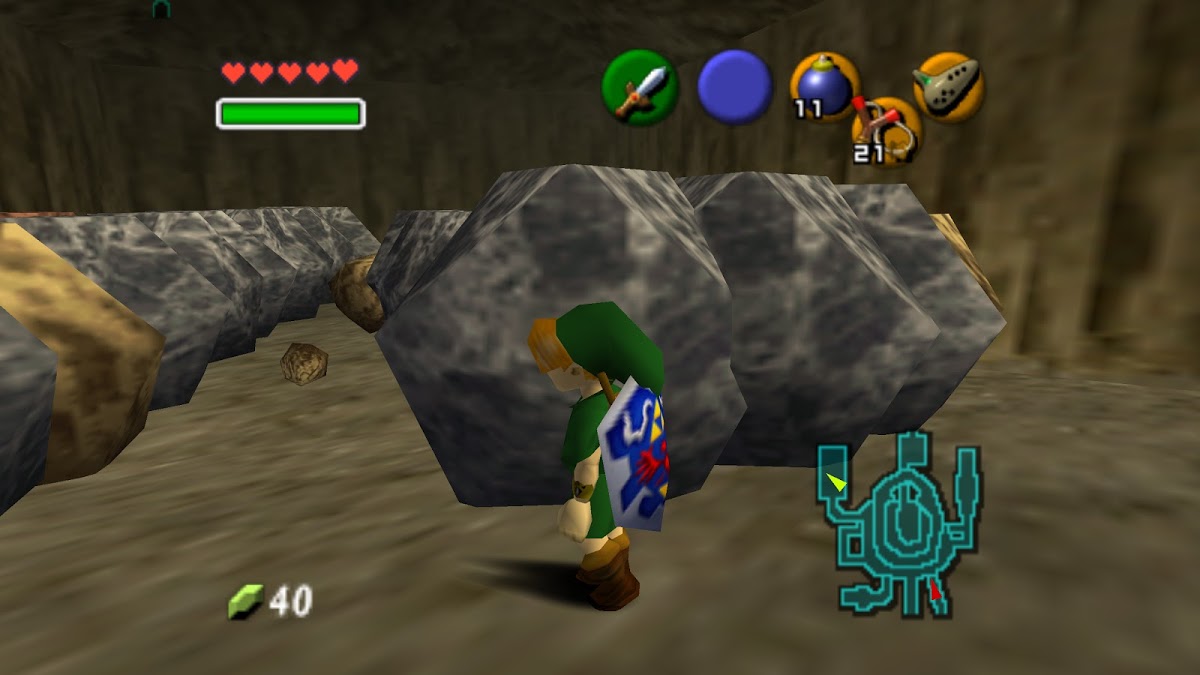 So I find this huge stone maze instead, but now that I'm inside I'm gonna check out the end of it so I bomb all the stones and eventually get to two chests that each have 50 rupees inside.

So that solved the money problem.


No, he didn't have Deku seeds either.
And no upgrade.


And then it's back to Cozy Tummy Time With The Child-Princess. So I run back to Zora's Kingdom eager to finally progress a bit before I stop--


But actually, wait a minute, one more idea. Now that I'm this close, I might as well have looked up how you buy a bag upgrade. Because it's going to save me some time in the future. So I won't have to spend another episode like this.


So turns out, you can either win one in the shooting gallery game (Nope!) or.. the far easier solution, find a specific target in the Lost Woods, shoot it three times, and get one.


Ok, and I'm supposed to know this like how? Sure, numbers pop off when I hit it but like, why hit it three times? Sure, game. Ok. Whatever. I looked it up. You win. Now give me my bullet bag. 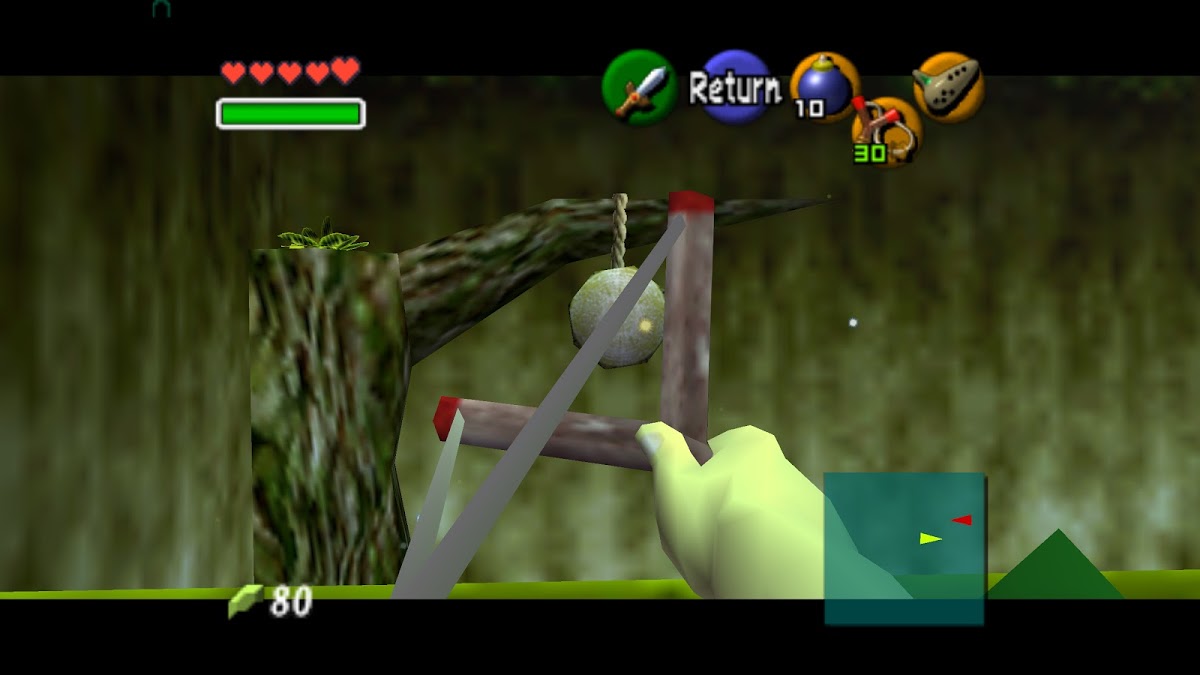 So it's back to the Lost Woods, find the target, shoot it three times, and then this guy pops out and jumps across the log all happy 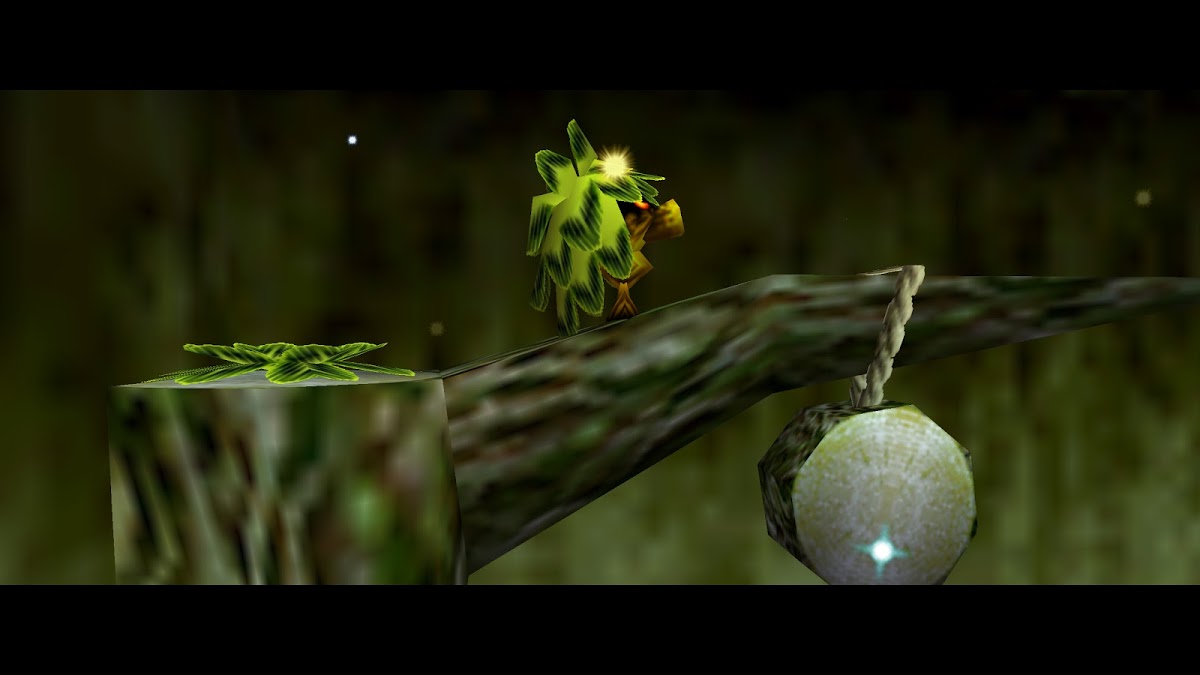 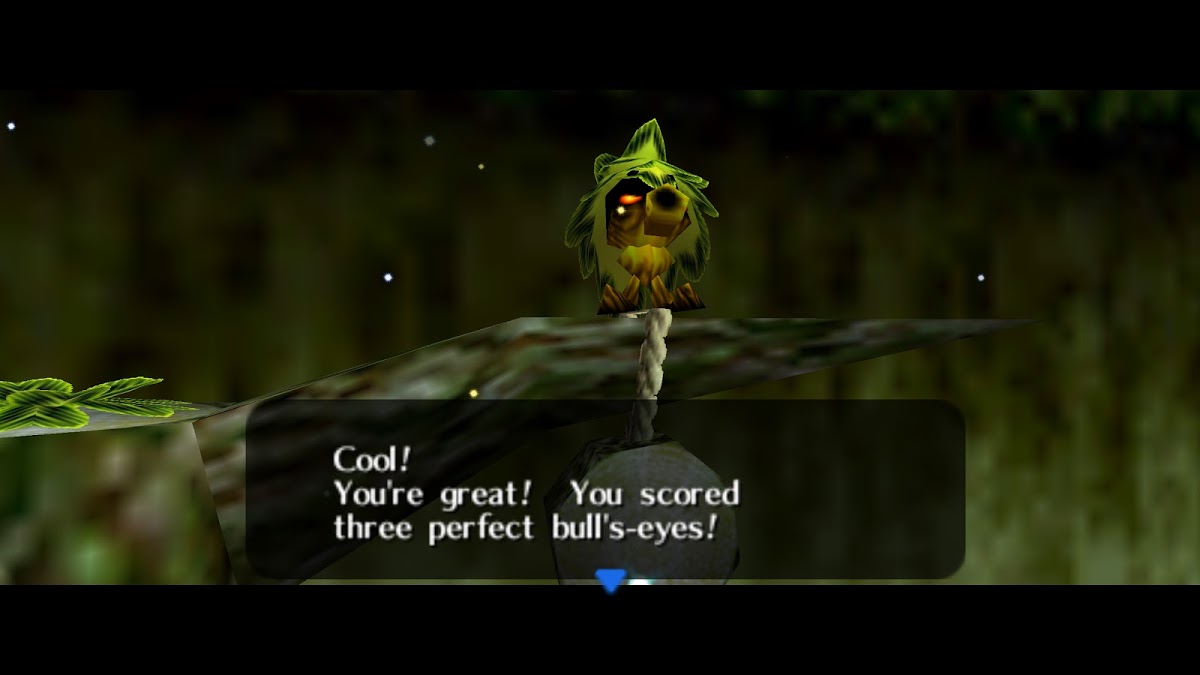 I am, thank you for acknowledging it. Just look at all the cool things I've done this episode.

And I've almost forgiven everything, and then he gives me the bag and scrams.


NOW it's back to Dream Fish and His Big Belly + Cohorts and finally do some shit.

And then I looked at the time.


It's true. I spent an hour finding seeds.
Welcome to Ocarina of Time. We've still not got a single Triforce piece. I'm not even sure we've been in a Temple yet.
What have I started? 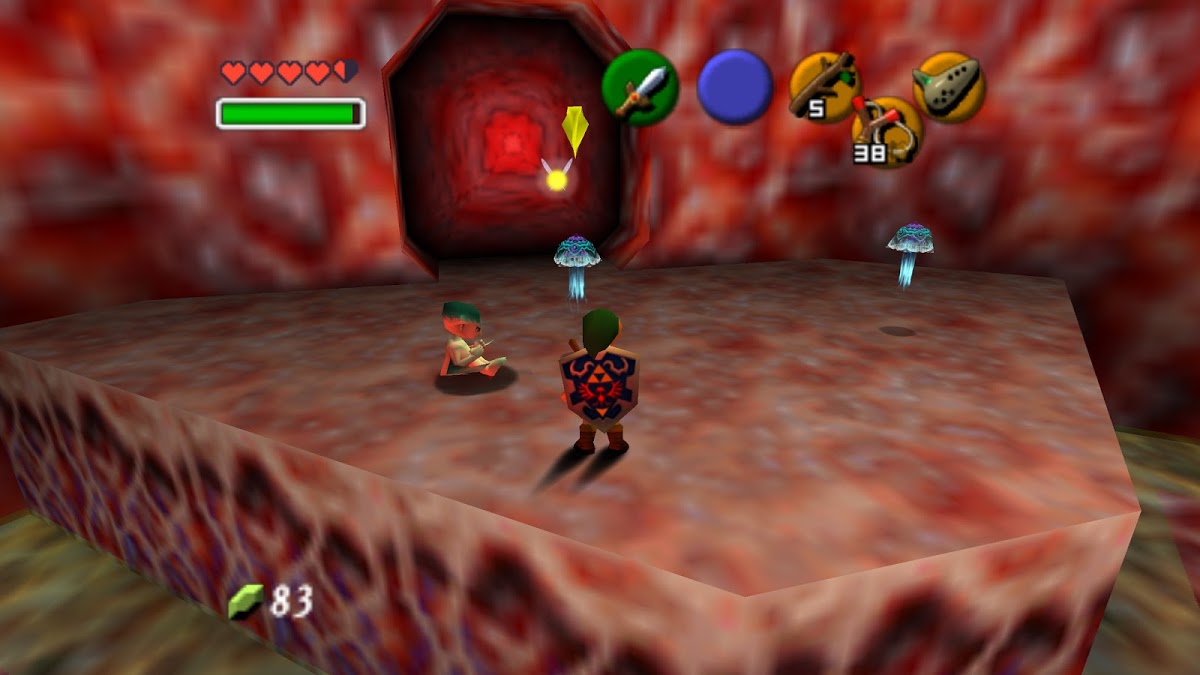 So this was a bit of a crap-shoot, huh? Well, yeah. I wanted to progress too. This dungeon seems like the kind of one you just need to get over with and now I just spent an entire episode doing nothing but not getting over with it. Soo... hope it'll be fun, actually? Wish me luck!