All right, sorry about last time, now we're done with that doodlin' around. We've got a Fish Stomach to run around in.

Get it? Because there are electrical monsters in his--
Yeah, all right. Strap in because it's about to get a lot worse than that!

Now, we know how to deal with the princess carrying debacle, so we pick her up and run through the puzzle and use the slingshot as Prepared For and get her up to the top floor. 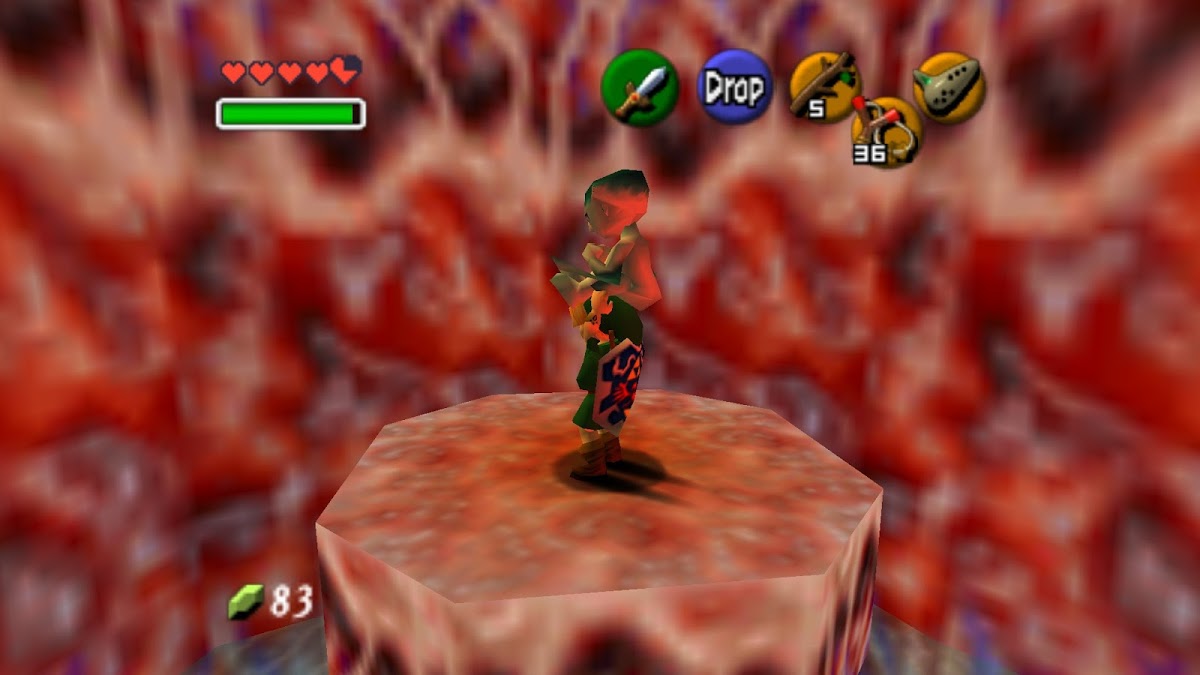 Because I did some exploring when I was first here I have a pretty good idea what I need her for, too.
You see, in the back of the stomach (in the... intestines?) there were two buttons I couldn't push myself. The first one was one where Na'vi said I wasn't heavy enough to push it with my weight alone. So, naturally, if we both stand on it? 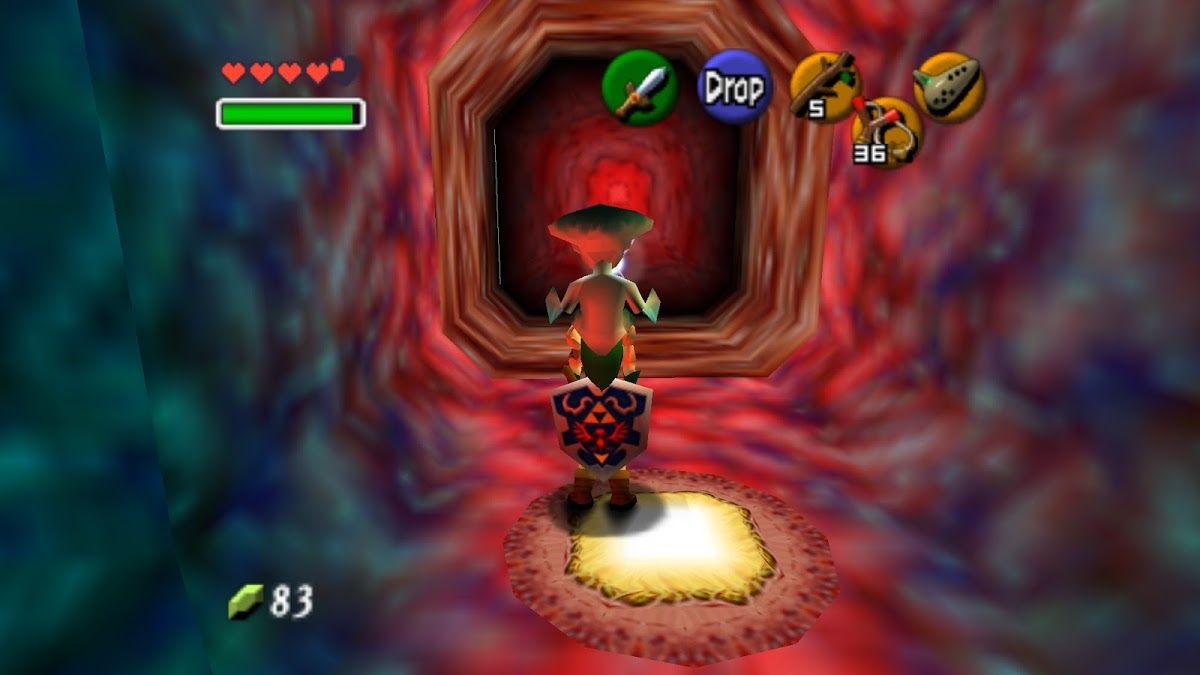 Yep, it worked.
Behind that door were some shark-stingray-thingies and after I killed them, a chest popped out of thin air and gave me a Boomerang!
Sweet! Another Zelda Checklist item complete!

....And now the slingshot is... obsolete. You see, the boomerang returns to you when you throw it so it doesn't need ammo.
The entire last episode was me getting ammo for my slingshot.
Crap.
Had I known this, we literally could've cut that entire thing out of existence.
Welp!

Back outta that room, I run to the other button, which is a button that only holds the door open as long as you stand on it.
Soooooo.... we leave Ruto on it.


Yeah. You're literally using her as a box.
UughhhgSiiiigggghhhGoooddd


I've no funny quip for that. That's just bad.

Inside, there's a "Parasitic Tentacle"TM, where Na'vi carefully guides me that it must be shot with a "particular weap-- 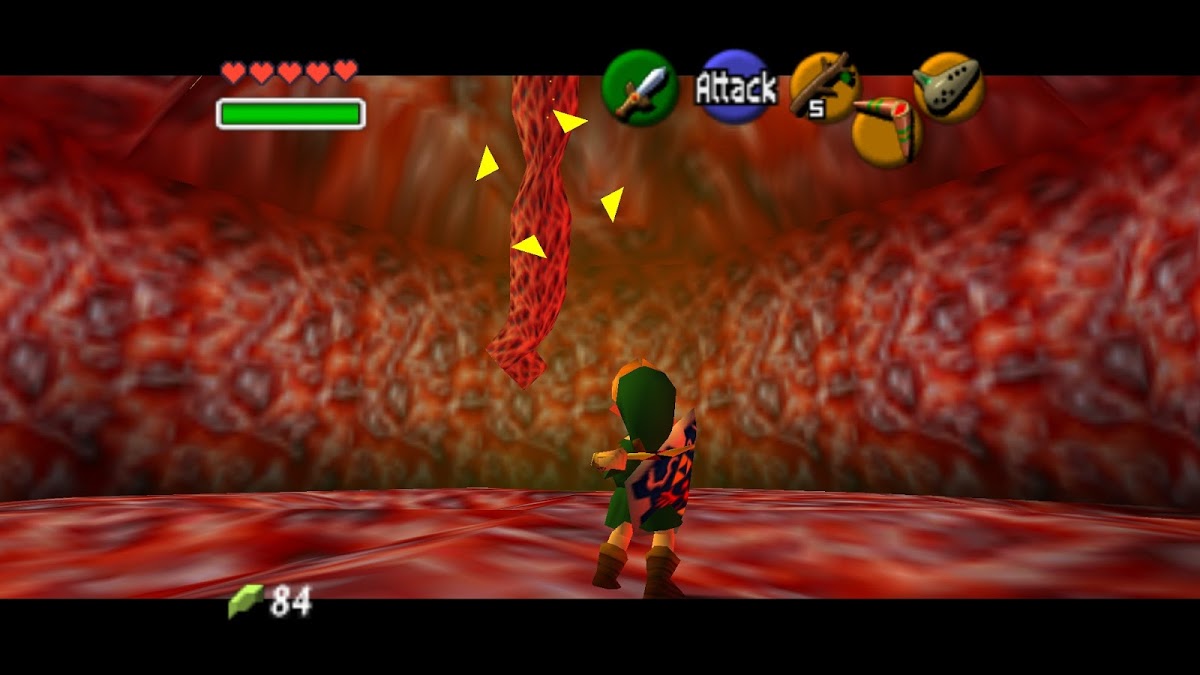 Dead.
Outside, some things have changed, some new pathways open up that were before covered. 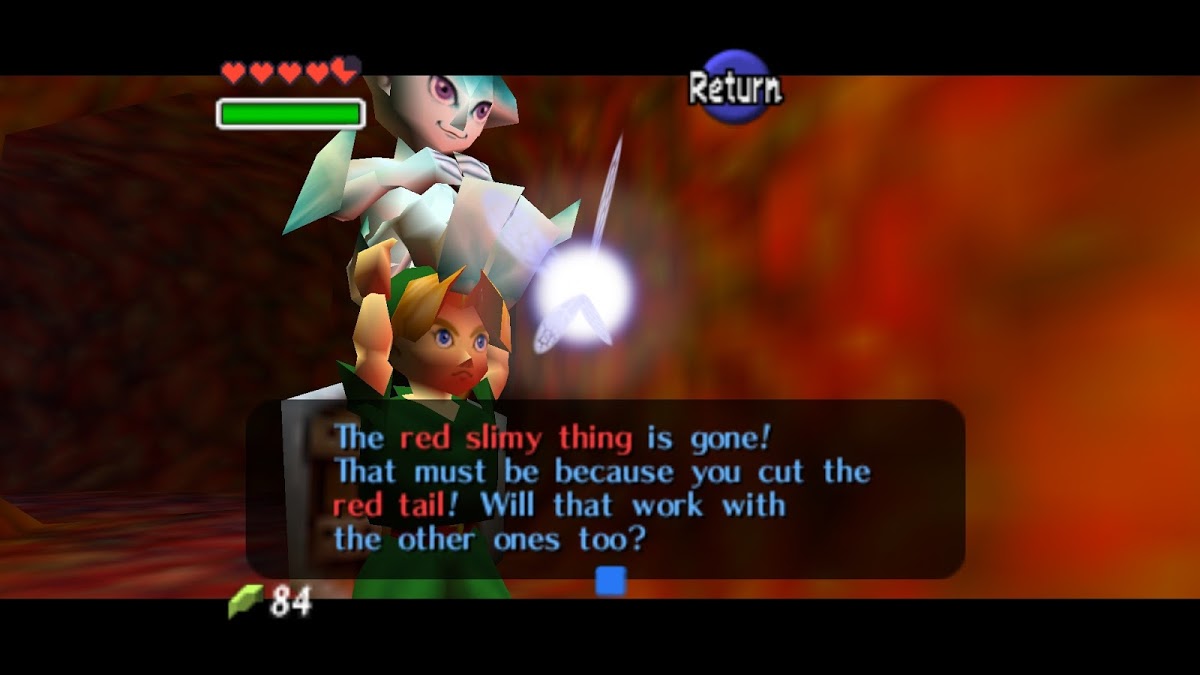 So guess what? We kill some "Red Tail Parasitic Tentacle"s for a series of rooms to get the map and the compass until we get down to the final area I couldn't access from the beginning. 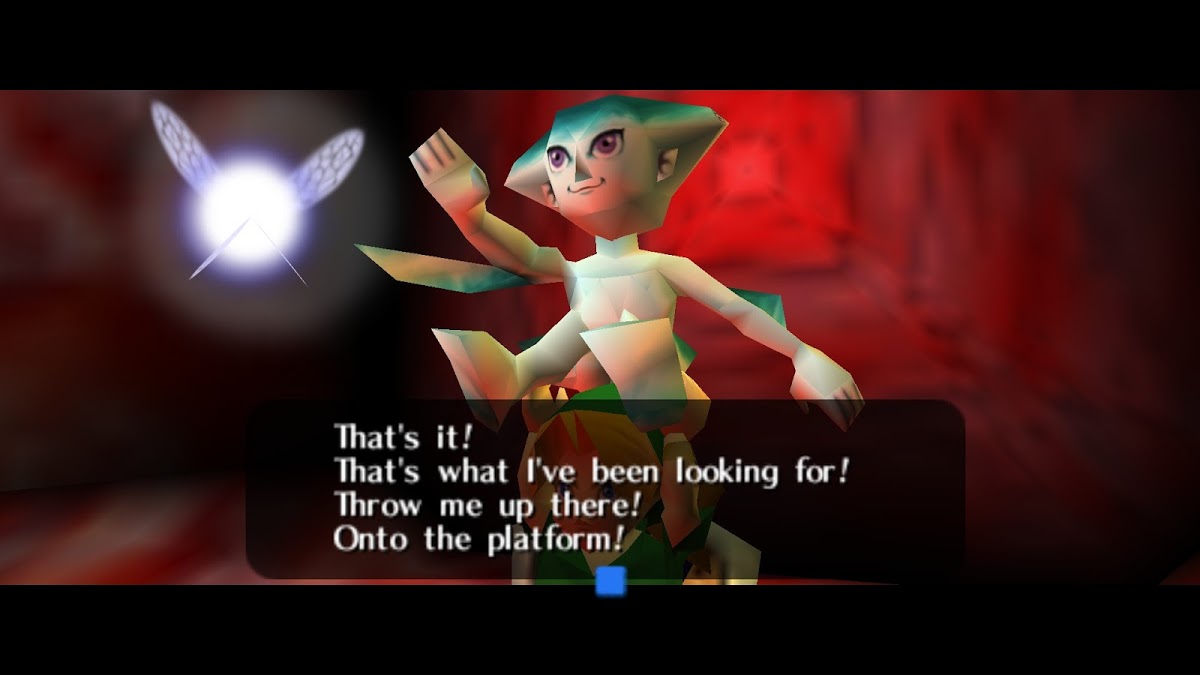 Where Ruto freaks out and actually wants me to throw her, which seems like a "great"(no) idea, so I do it and she picks up the Stone we've all been searching for, and is all happy and ready to go home, when, surprise, the platform she stands up lifts into the air. 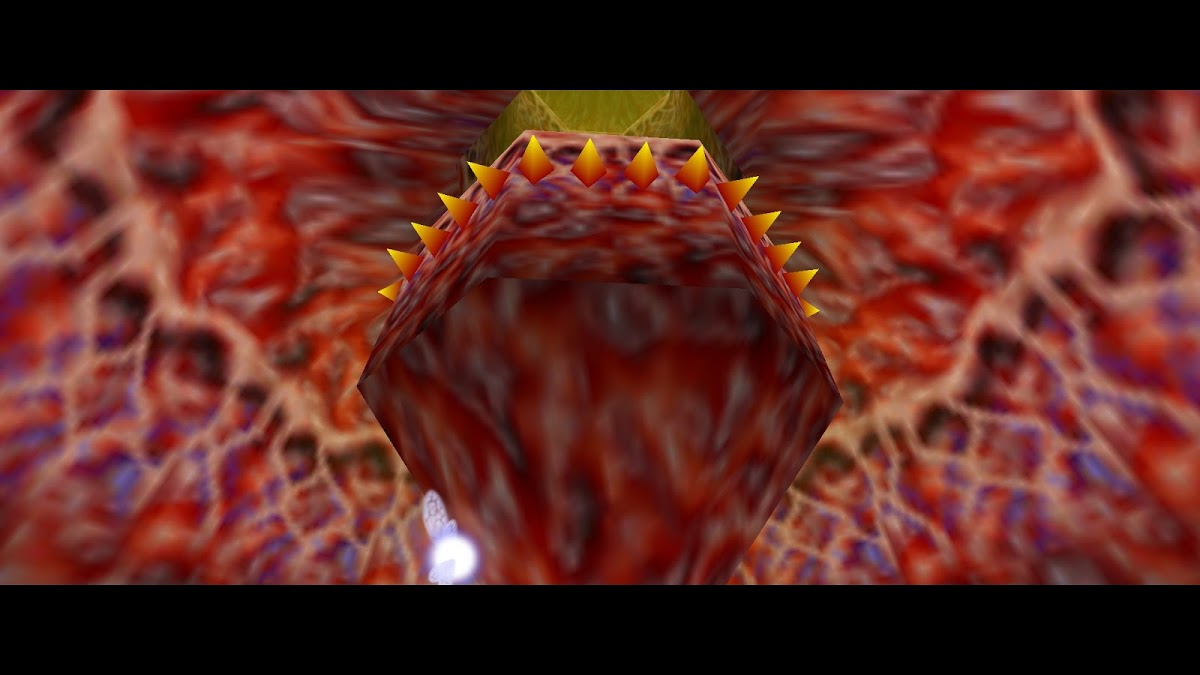 And unfortunately I didn't get a screenshot but then up there she says something like "Keeeyyaaaahh! It's kind of an octopus!" which is a pretty wonky thing to yell when you're in mortal danger, but then the platform lowers again and reveals said "Octopus" creature: 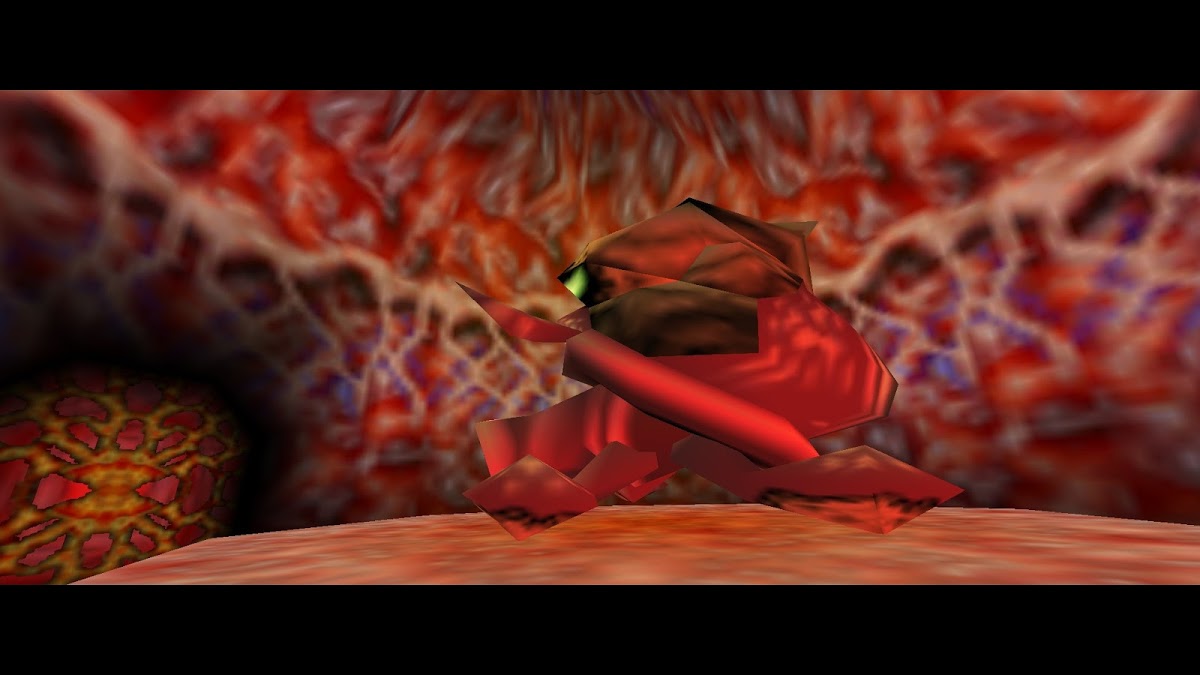 Which, hey, this is a really bad angle. It does actually look more like an octopus from the front.

And then there's this really bad fight where the Octopus runs around in a circle and I have to stun it (without being able to Z-target) it until it faces the opposite way from me so I can hit it in its big green weakspot. Problem is, most of the time it just runs around the circle, and you can't really catch up to it at full-run, so you have to sort of wait and chain-stun it until it happens to be stunned the right way.
Yeah, it doesn't sound great, and it wasn't.


But no biggie, it's over now, and now Ruto is gone. But I can go up the elevator platform now and through that, unlock a new path from the main entrance room.
Problem is, there is another button "Puzzle" where I need Ruto, but she's gone.
So, just to be sure, I search the entire dungeon again if she just happens to sit somewhere in a corner sulking for a white prince to save her (I mean, shit, right? That could've totally been a thing they'd do), but no, the solution is arguably... worse? 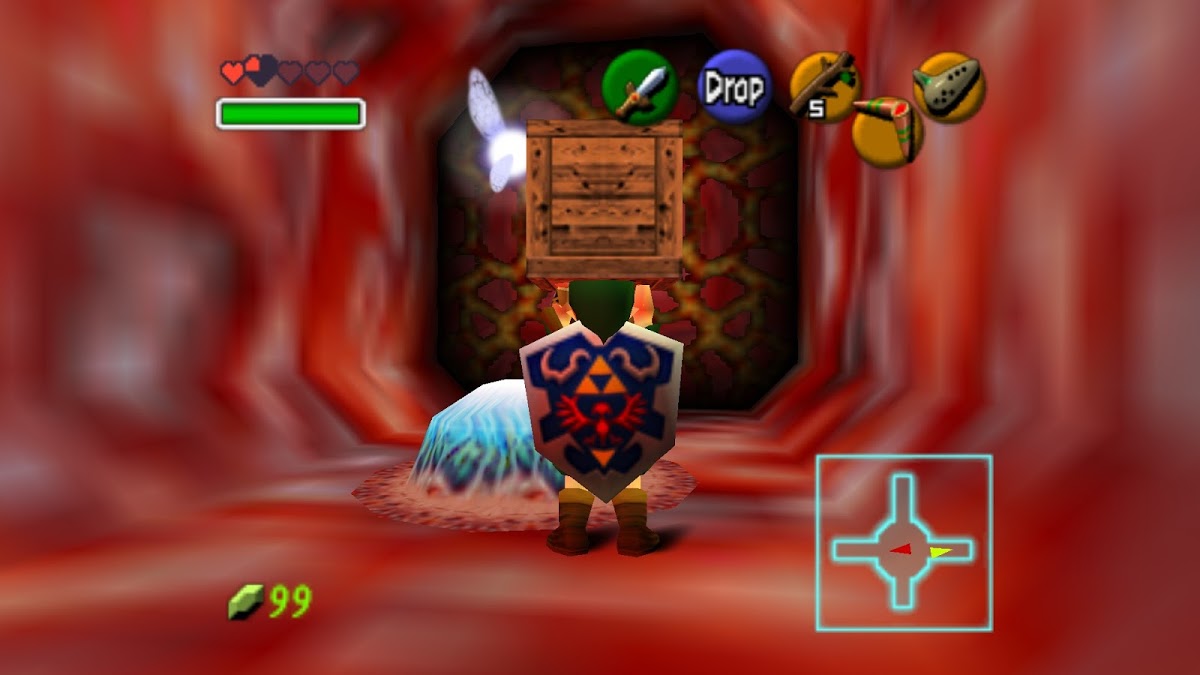 You find an actual box.
I'm not shitting you.
Just to cement the fact that she was just an object before, here we go, replacing her with an actual thing.
Good job, game.


So, now the map tells me I'm on my way to the boss room, which is good news because then this thing is almost over, but the room there is all green and has all these cobwebs all over, which confuses me.
Is the boss some sort of spider thing? That'd be sort of against the entire dungeon theme so far. 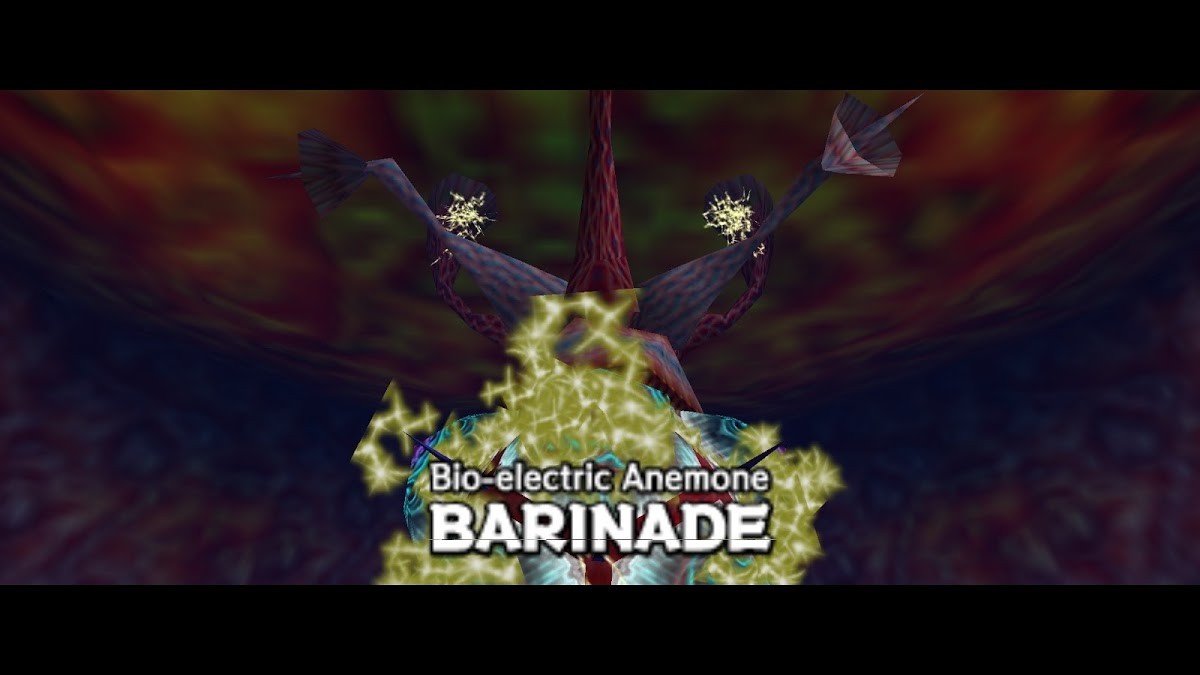 
Which is actually a pretty decent boss fight. She has several stages and there's a good sense of pace to the whole thing, but of course it's solved by just using the boomerang a bunch (which is a fun thing to use!). 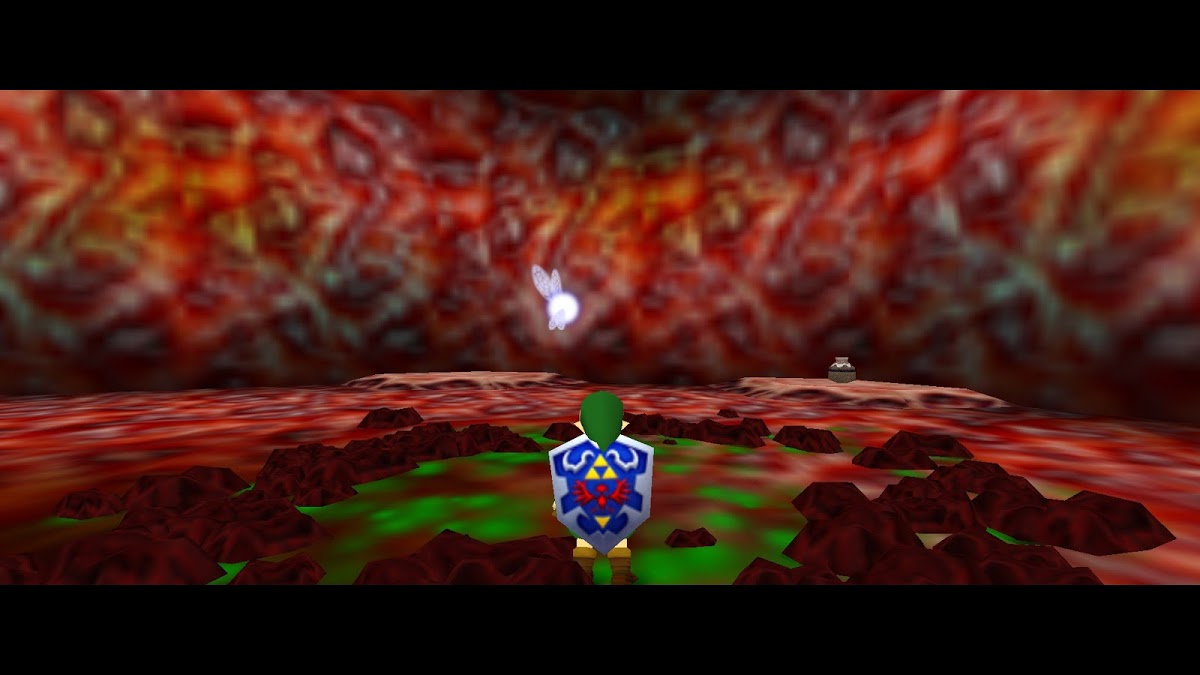 Hope that doesn't mess up Lord High-Cod's stomach too much.

We did it! Heart container and another dungeon cleared! 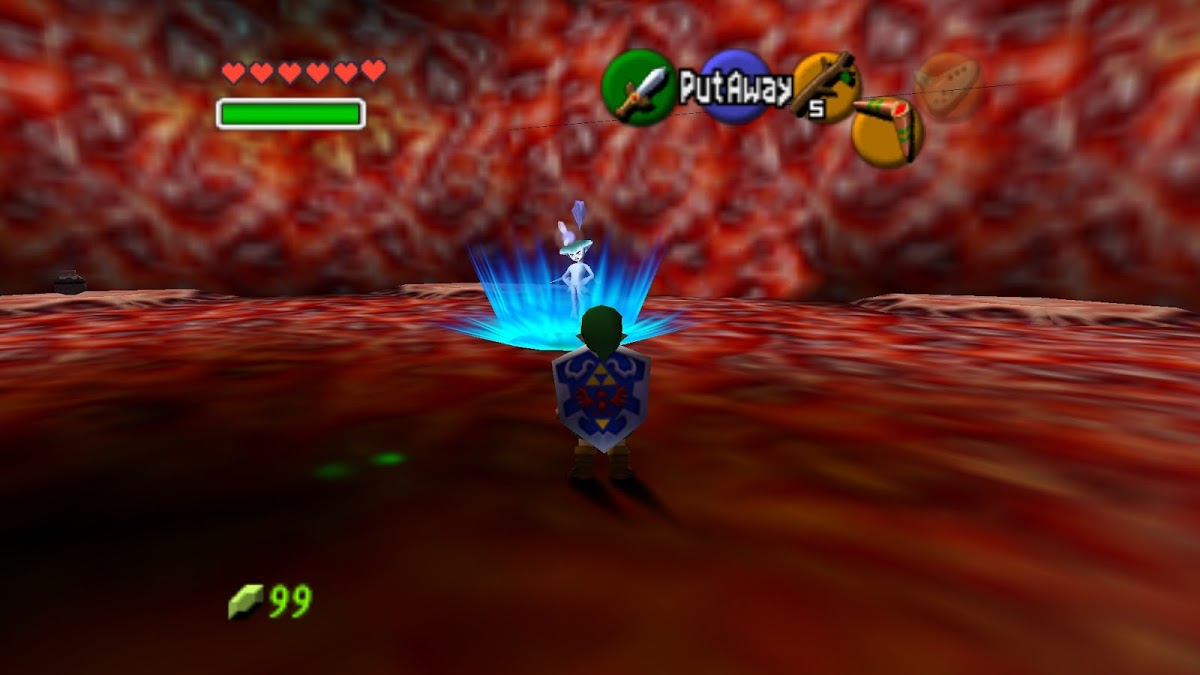 Oh, look who's back. looking all smug. And then we teleport out of the dungeon and... 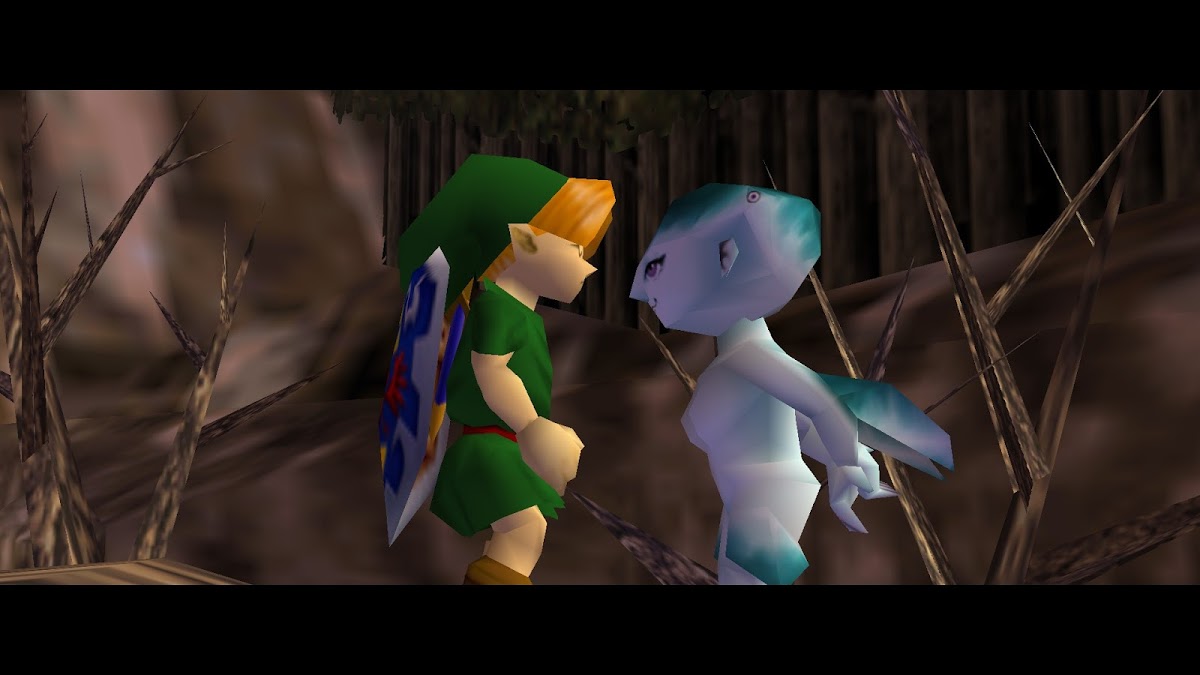 OH COME ON.
She's suddenly infatuated with me? Gimme a break. 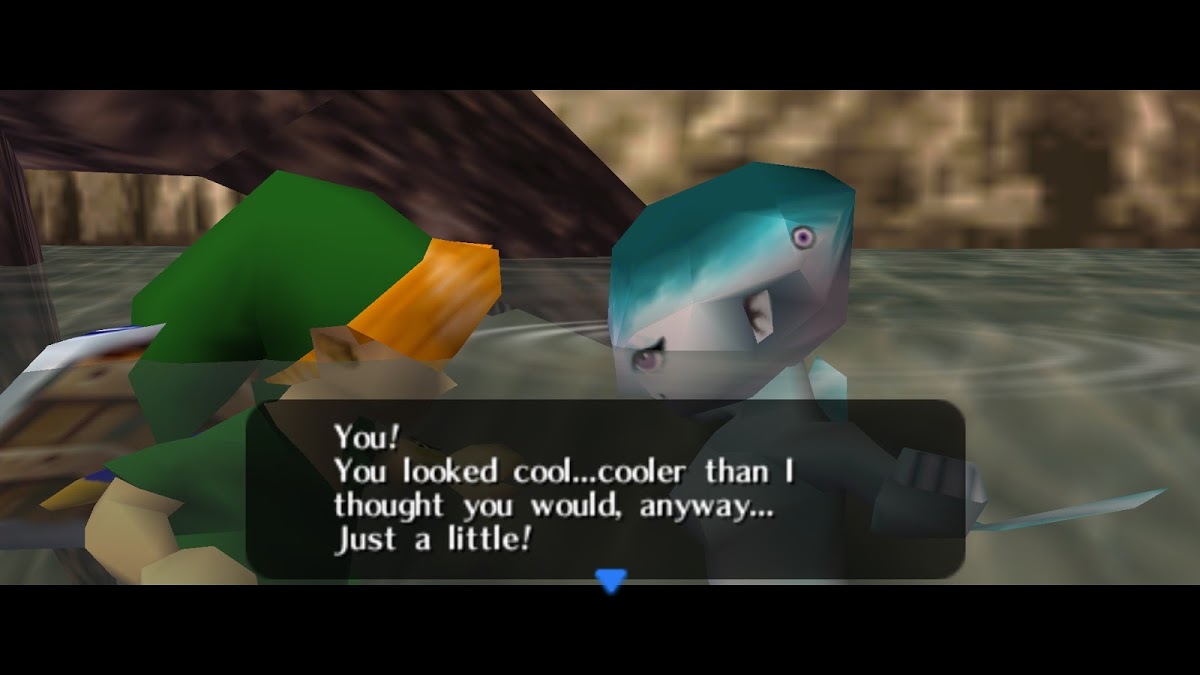 JEBUS GAME.
I'm sorry, Ruto. I wanted this to end otherwise but the game just won't let me. Instead, I'm feeling a little gross about the whole thing. 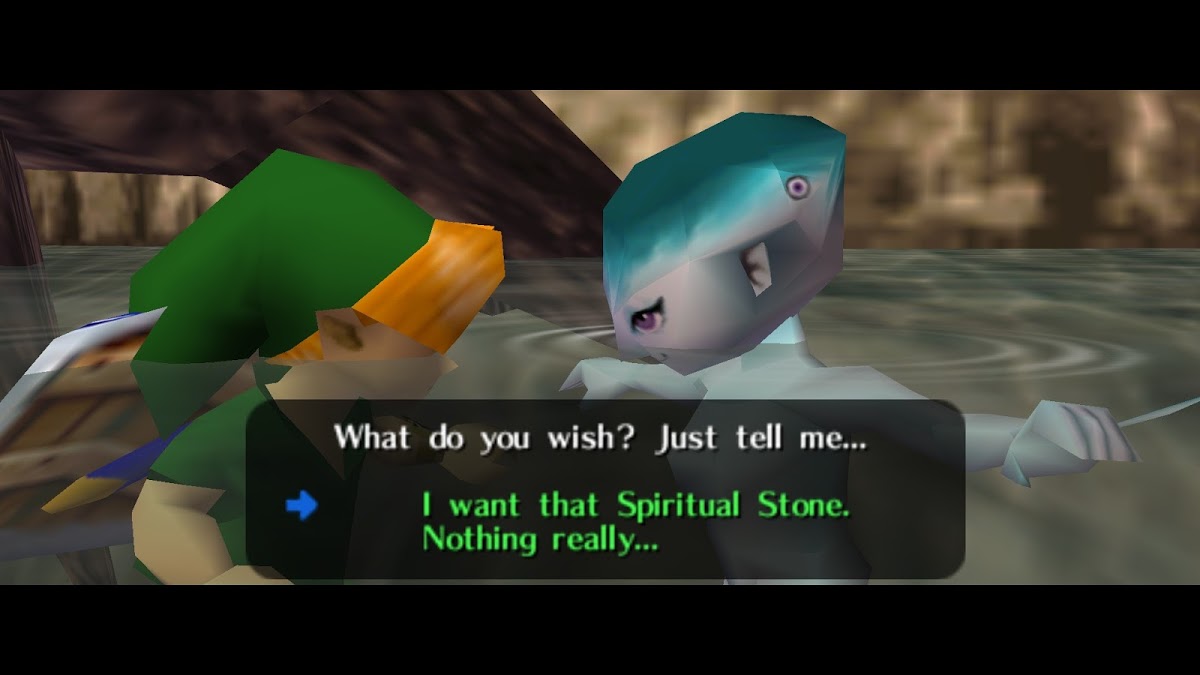 Link, though, doesn't cut her a break and just stays with pinhead focus on the mission. 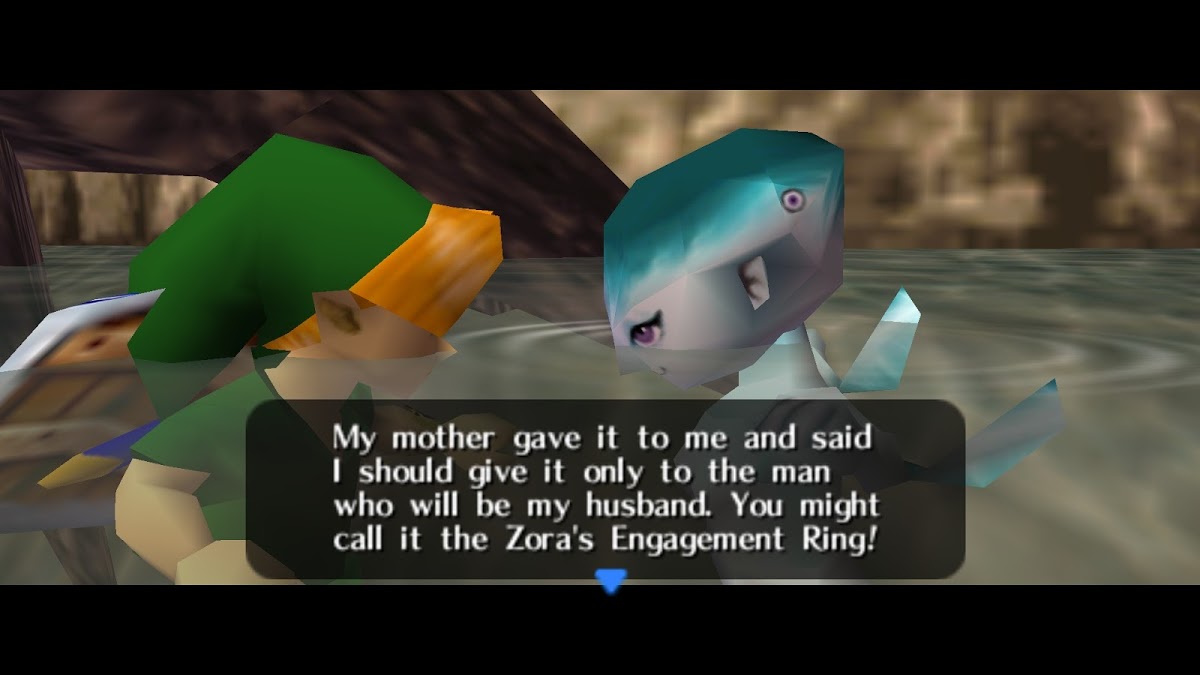 Right, just give your family's precious heirloom away to the first guy you think is "cool". Christ...
Like, I throw boomerangs and tell dads. I'm very "cool".


Let's immediately show how shitty Link is again by getting her stone and never seeing her again!
Which is totally what'll happen, innit?


Cause we got the stone! 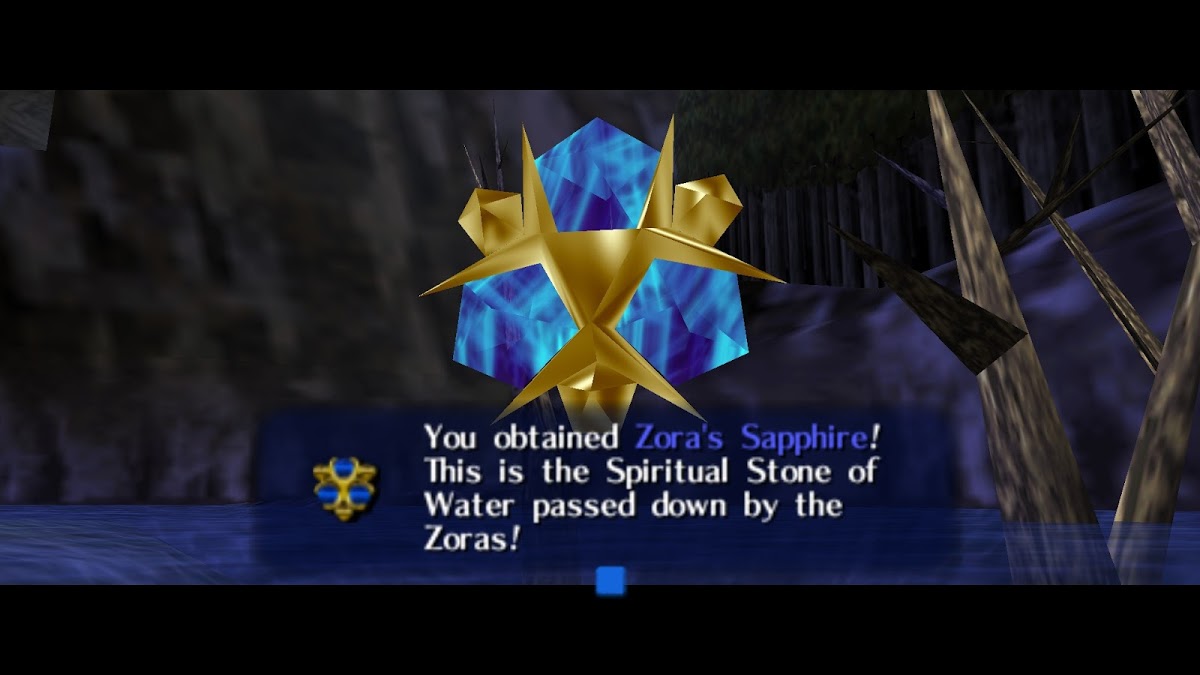 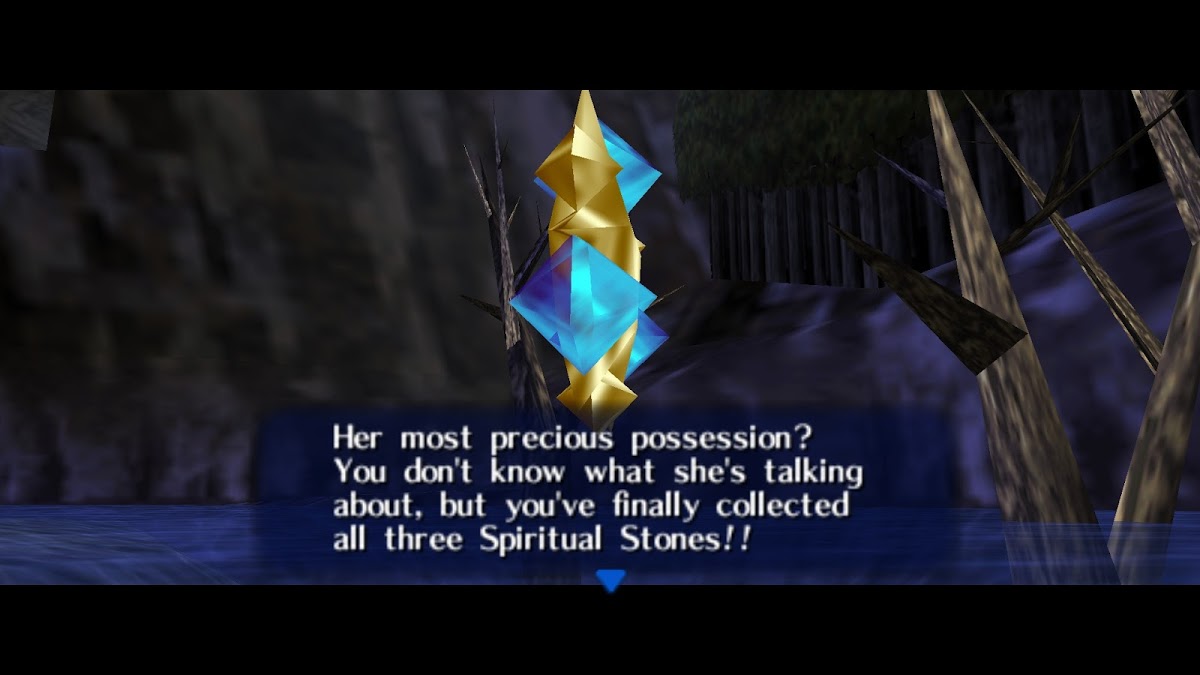 Link being thick, once again. I mean, he's probably not doing all of this on purpose. Which is worse? Why'd we decide he should be the Hero of Ages again?

But we have collected all three stones! Booyah! Back to the other Princess!

And then it fades to black and ends on this frame 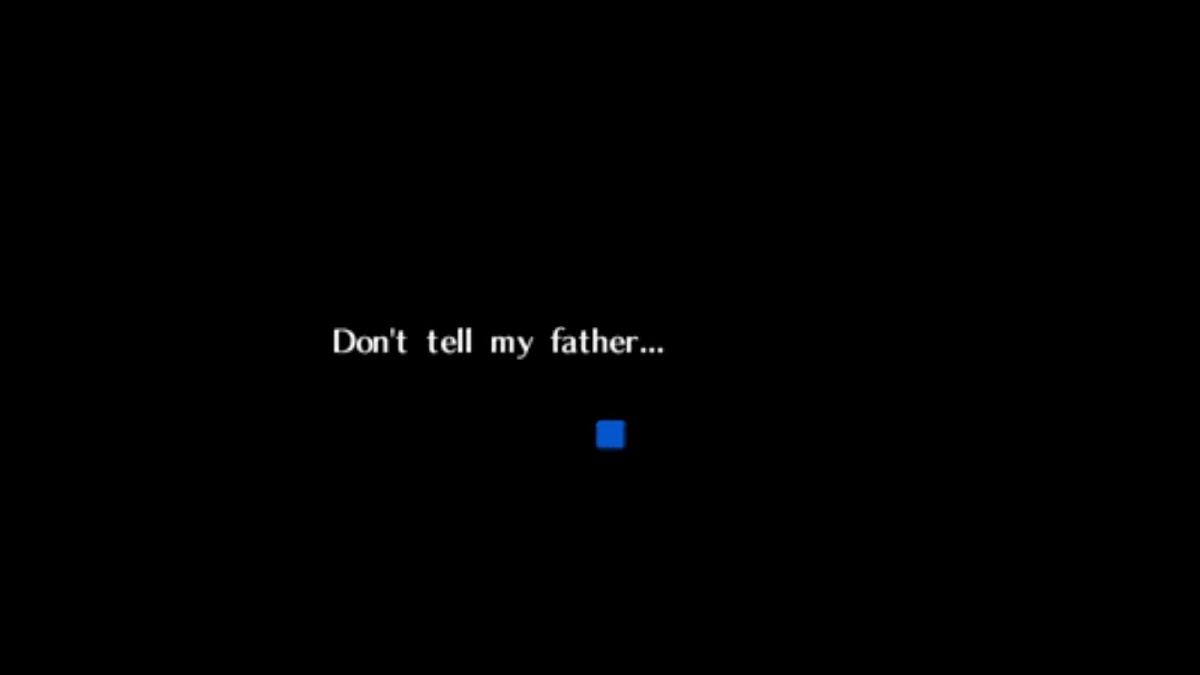 Which... just reminds me this story had actual potential to be interesting. Now it just makes this whole thing seem super flat. Glad that's all over!
(is it, tho?)

Final words on that bit, though, it was a pretty cool feeling to just breeze through this dungeon after feeling all the struggle last time in. Getting the boomerang and the map just made everything inside make sense, and all the confusion I'd felt before just evaporated. That was pretty neat.
(and hey I didn't kill the fish! Progress!)


So let's do this whole thing next time and see what bringing three stones together with a princess will do for me!