(I play Ocarina of Time every Sunday and write what happens inaccurately. See previous parts here. This is a pretty decent jumping on point, though!) 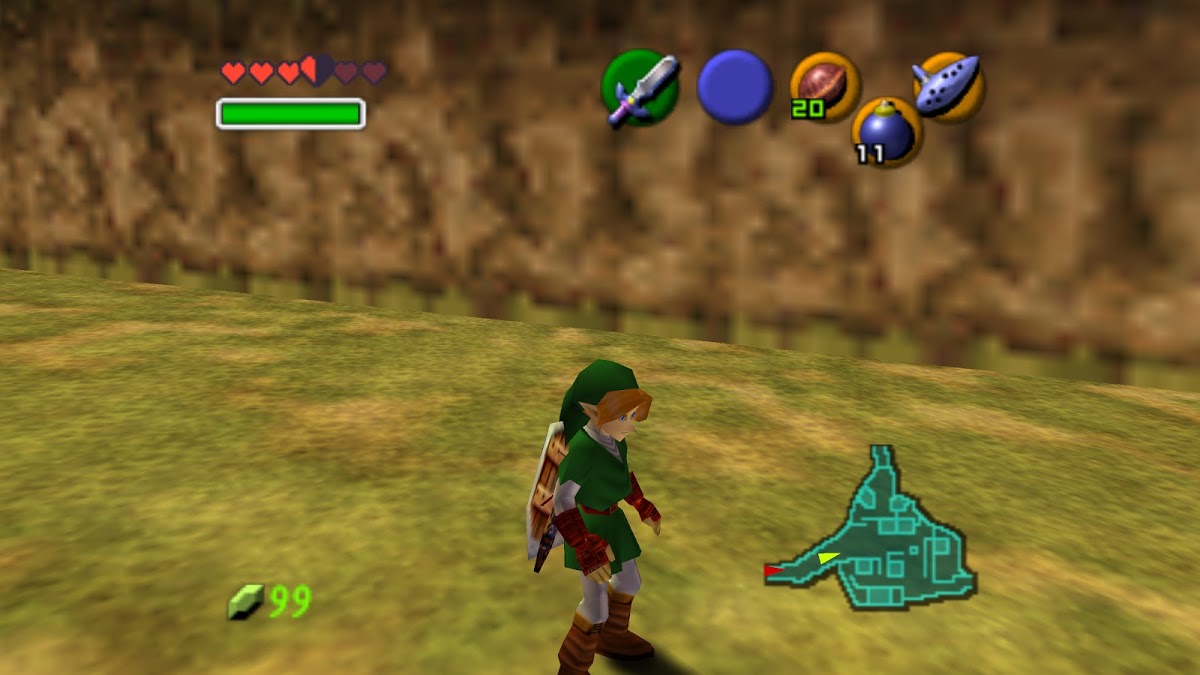 Right! We're all Big now! And the world's gone bad! Or at least, the castle has. Everything else seems fine actually. 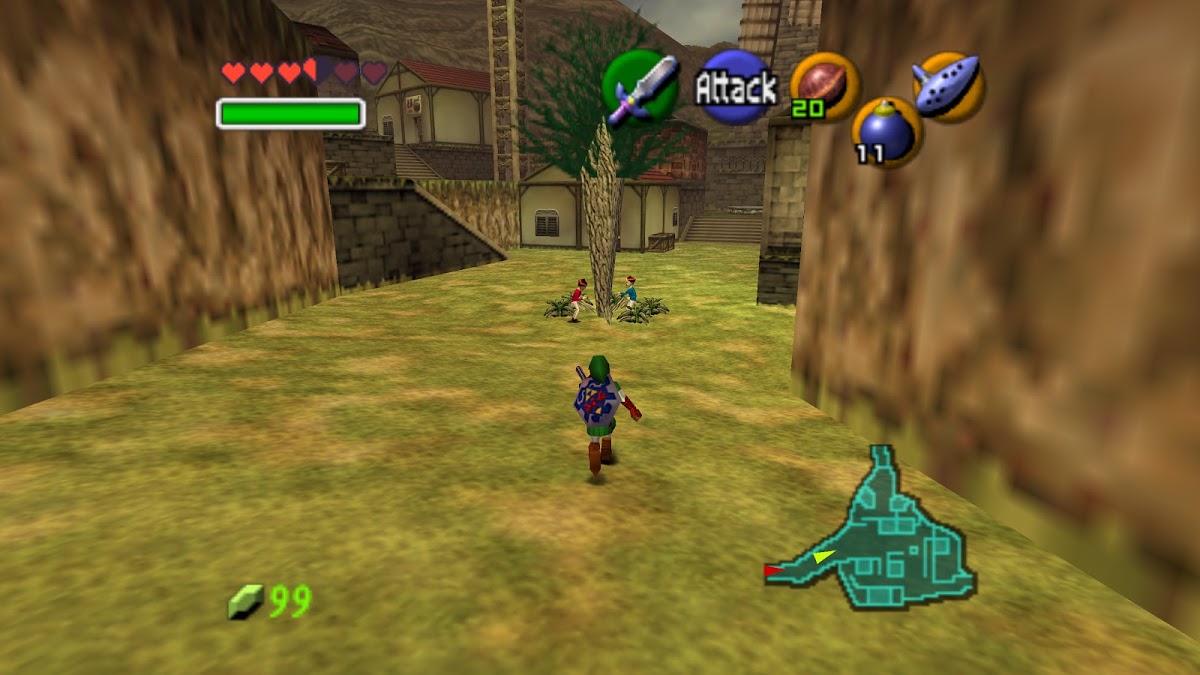 Like these fellas!
I went to Kakariko Village as we ended up being told by Z--Sheik I should go to, so let's see what's happened with the ol' place.

I talked to them there and learned that 1: They fled from the market town to live here, and 2: The Gravekeeper, Dampé, is a ghost.
Very wide range of info, there, sure. Wait, Dampé is a ghost?? Hm... Poor Dampé. He only meant well with his attempt to scare kids out of their good skin and their pocket change.

Anyways, on to the next most important part of town: 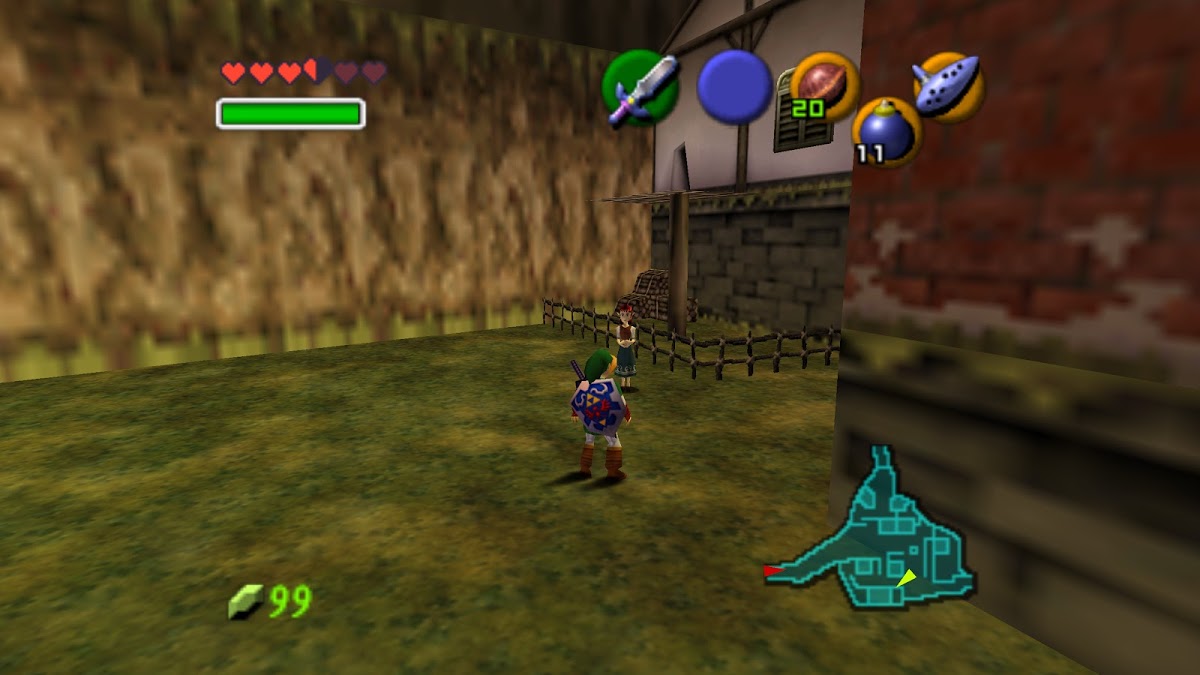 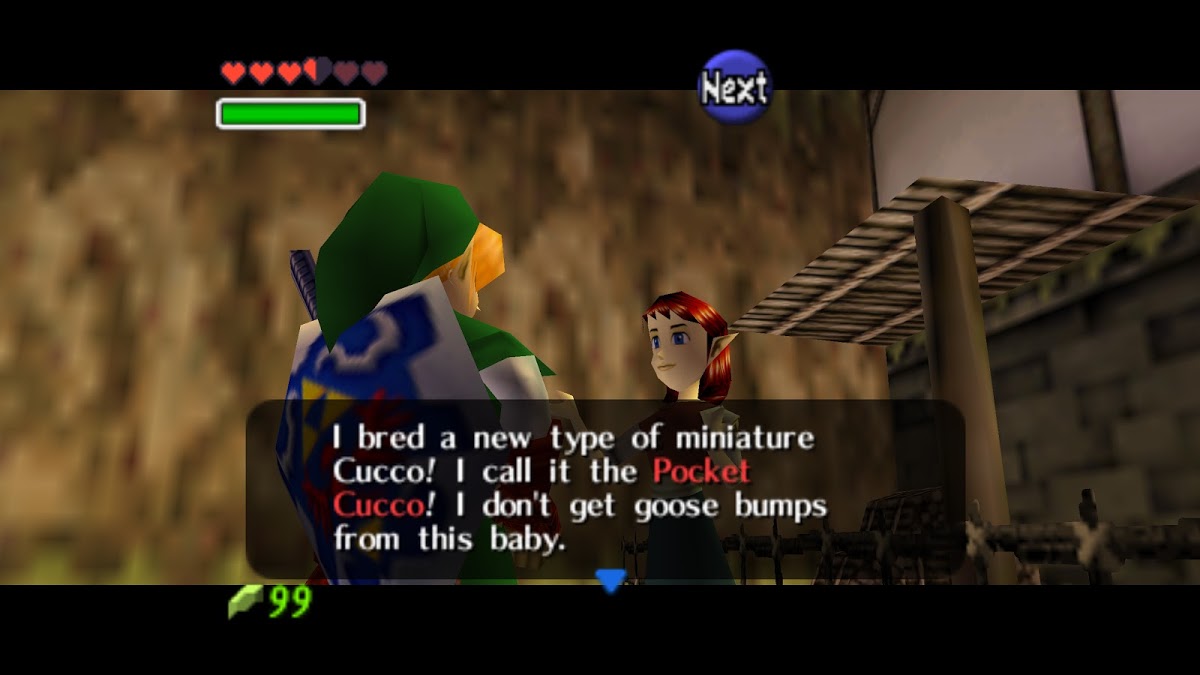 Oh, you just "bred" an entirely new species in seven years? So... you're a witch. Hmmmmm...
Also, one step closer to the inevitable Pokemon future this game was already heading towards, so I'm game. 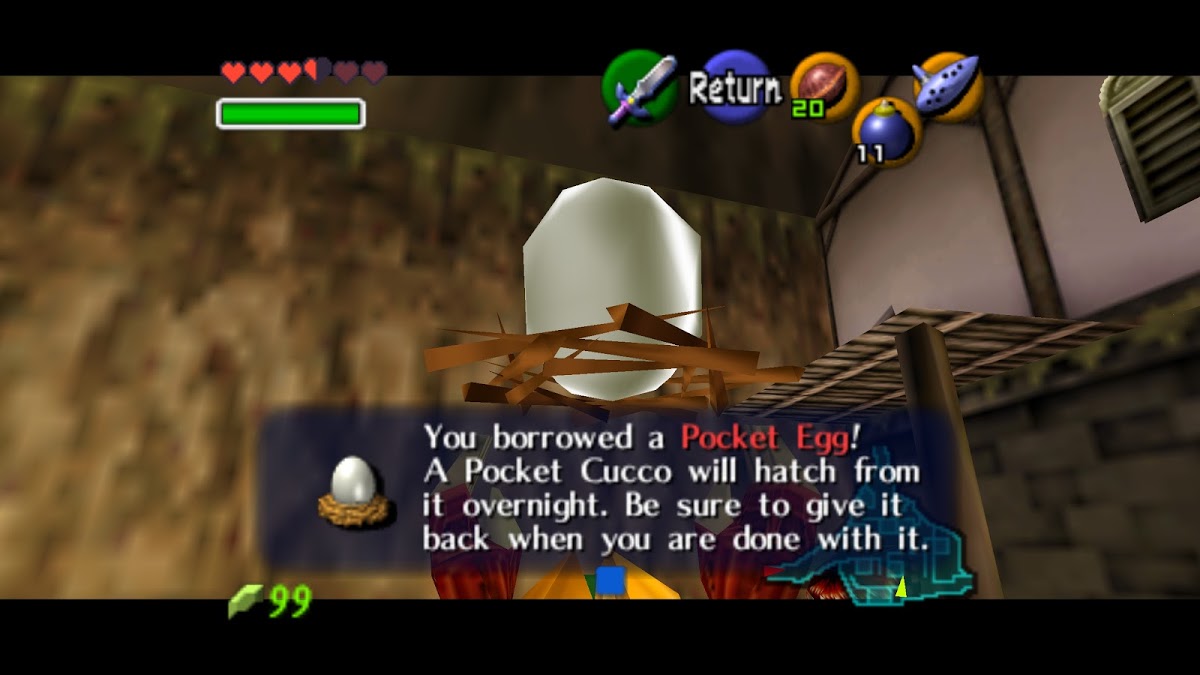 The next thing I notice in the village is that there are no Running Blue GuysTM which was inevitable, I guess. I doubt they could keep running for seven years.
That is, until I saw the next guy. I went inside the mill, and saw, well, our very good friend: 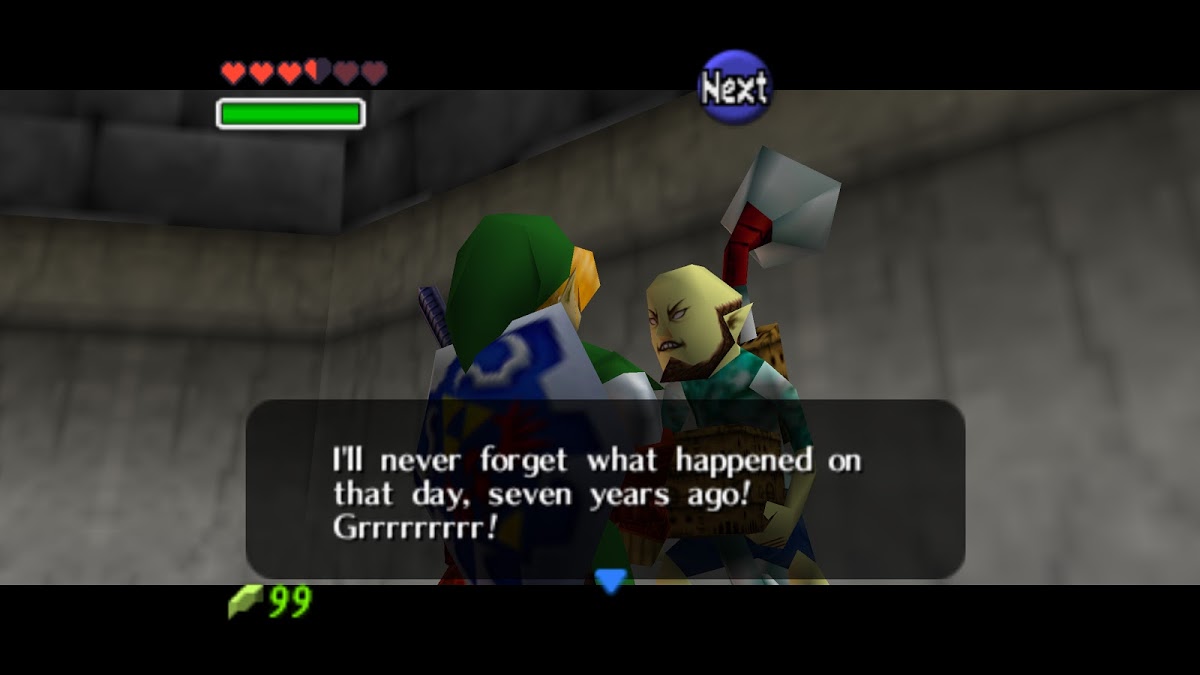 Uhh, you don't seem so happy about something. What happened big guy? 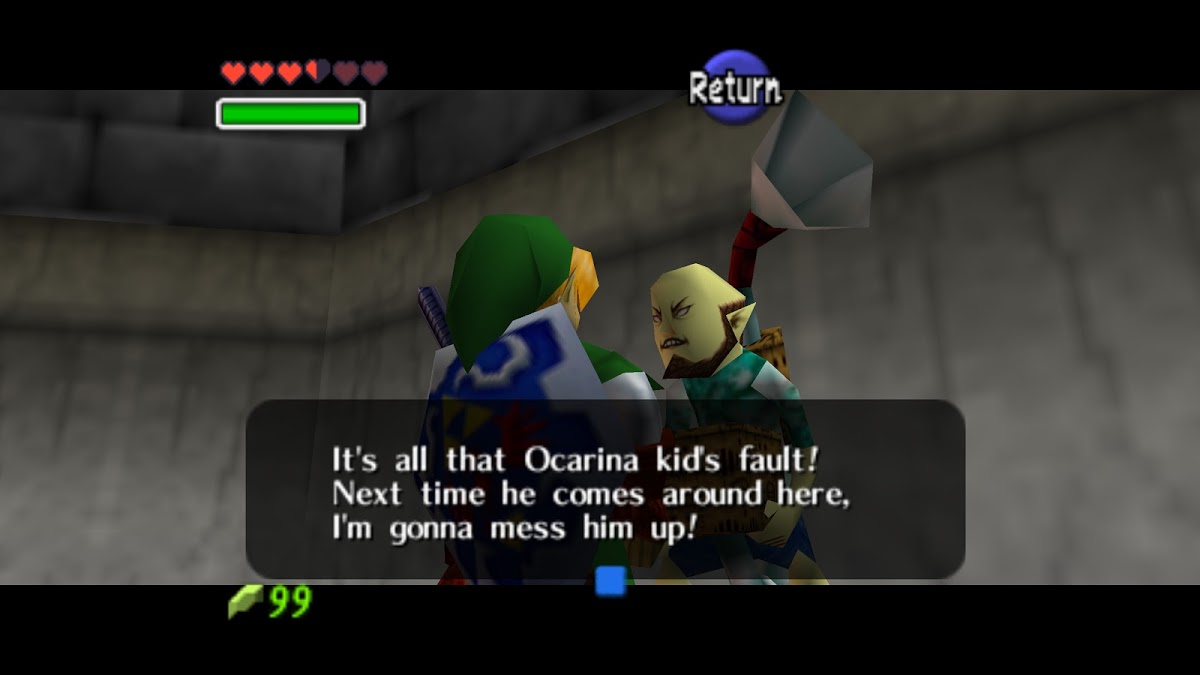 (What the hell did Link do now?? Not enough with all the bad things I know he's doing, let's add even more to the list?)
So, we scoot the hell outta there before he gets too good a look at me, and I dabble a bit more around the town. 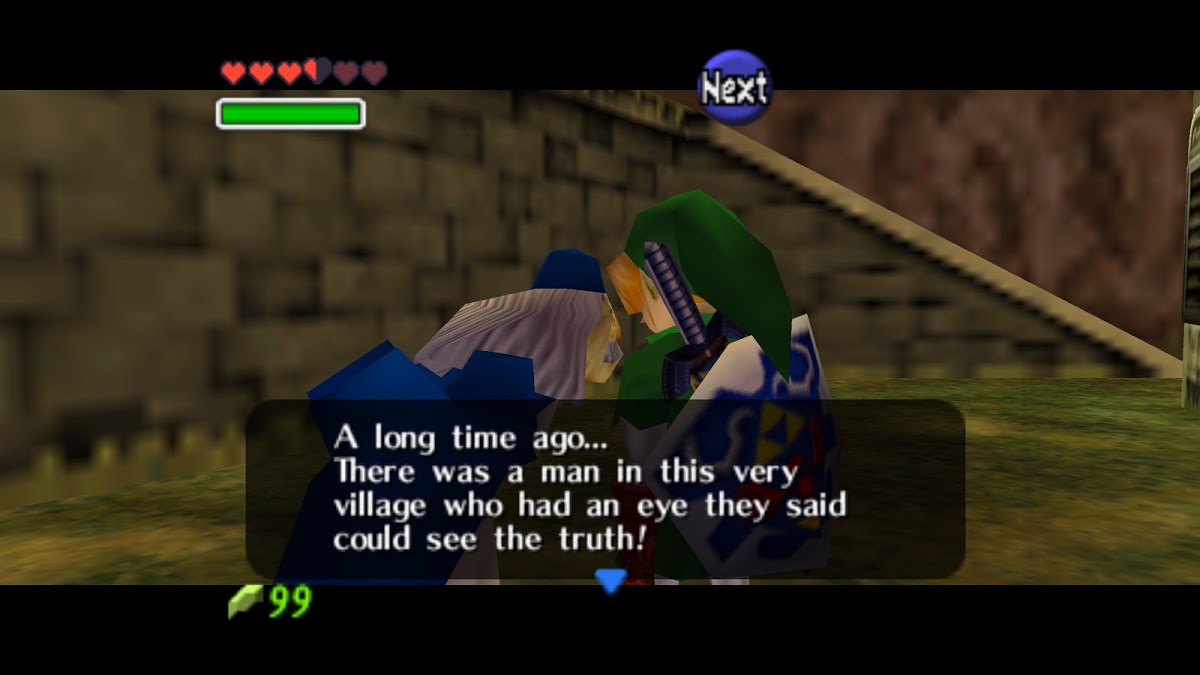 Hey, a blue guy! Half-way there! Was he here last time?

Hmm... I don't know what he's referring to there, though. Maybe that's a hint I should've picked up on? Maybe not?

Anyways, time to investigate some more houses, and run in one and see the same ol' cow I saw seven years ago. 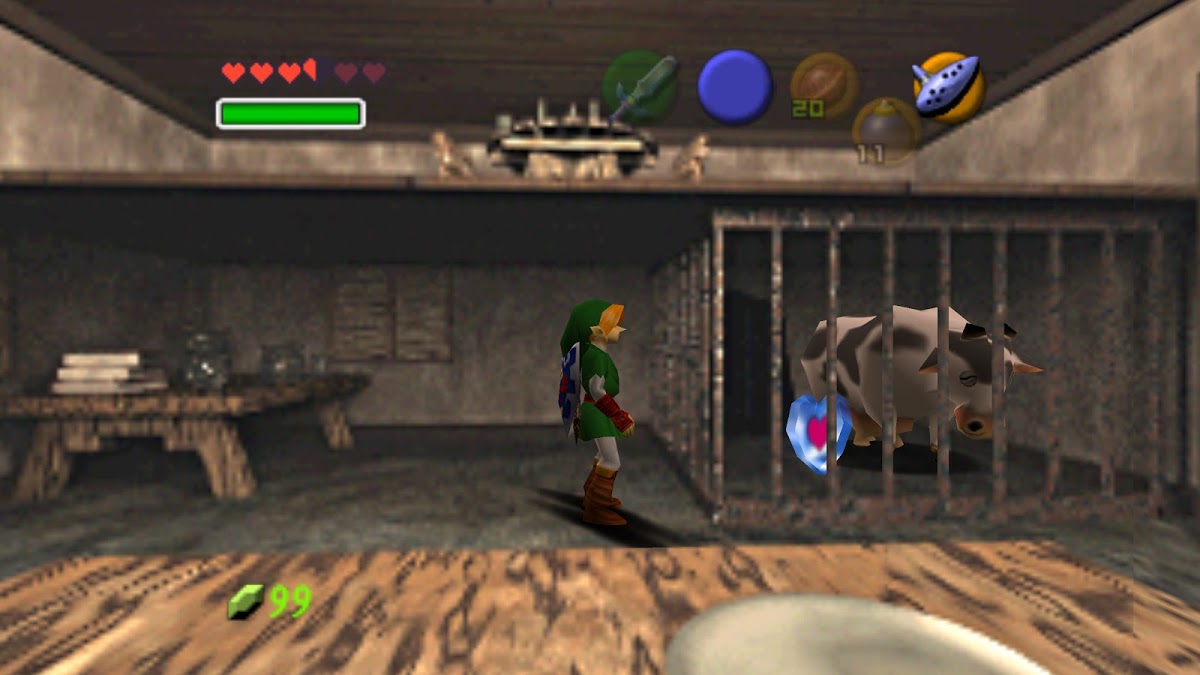 Still there, mooing along.

And then I run to the right and wham, a guy is right there, looking at me. 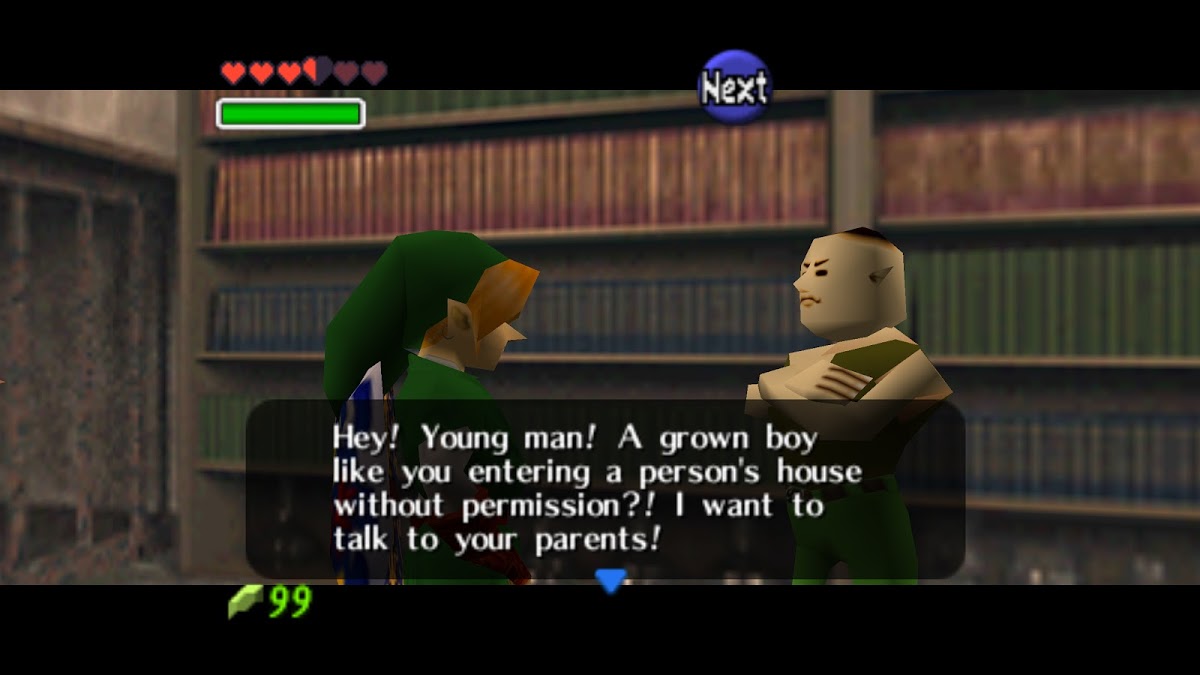 I might not look it, but I still got the brain of a child. Sorry pal.
So, naturally, he tells me, the breaking-and-entering-kid some good info. Because that's what you do to nosy children, yes? 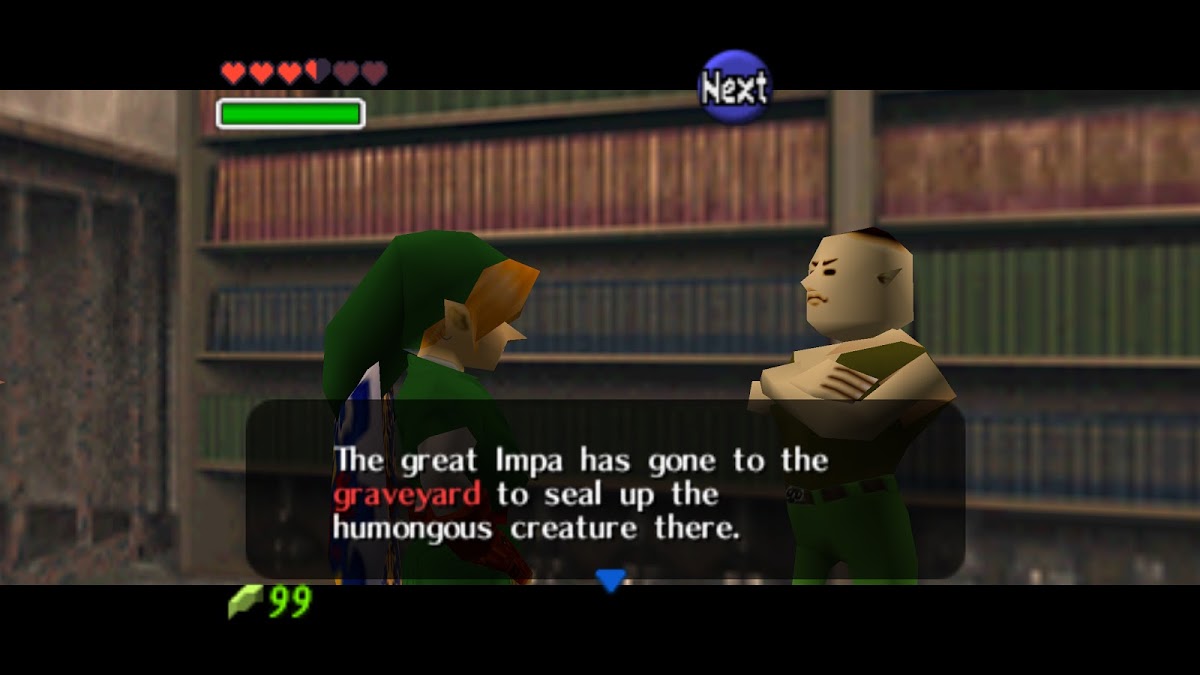 Huh, Impa's back? That seems relevant! And I chuck a note that I should check out the graveyard once I'm done with the town. 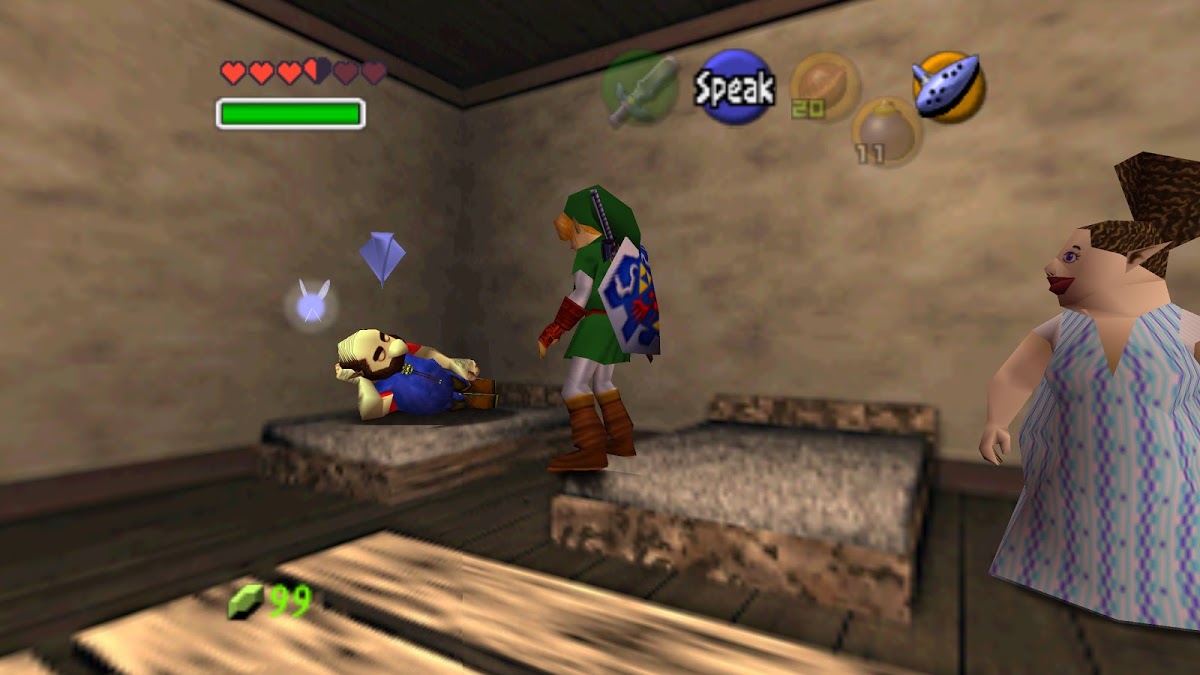 But before I am, someone told me that the Well had dried up and, well damn, gonna check out that well before I'm well done with the town, ain't I? 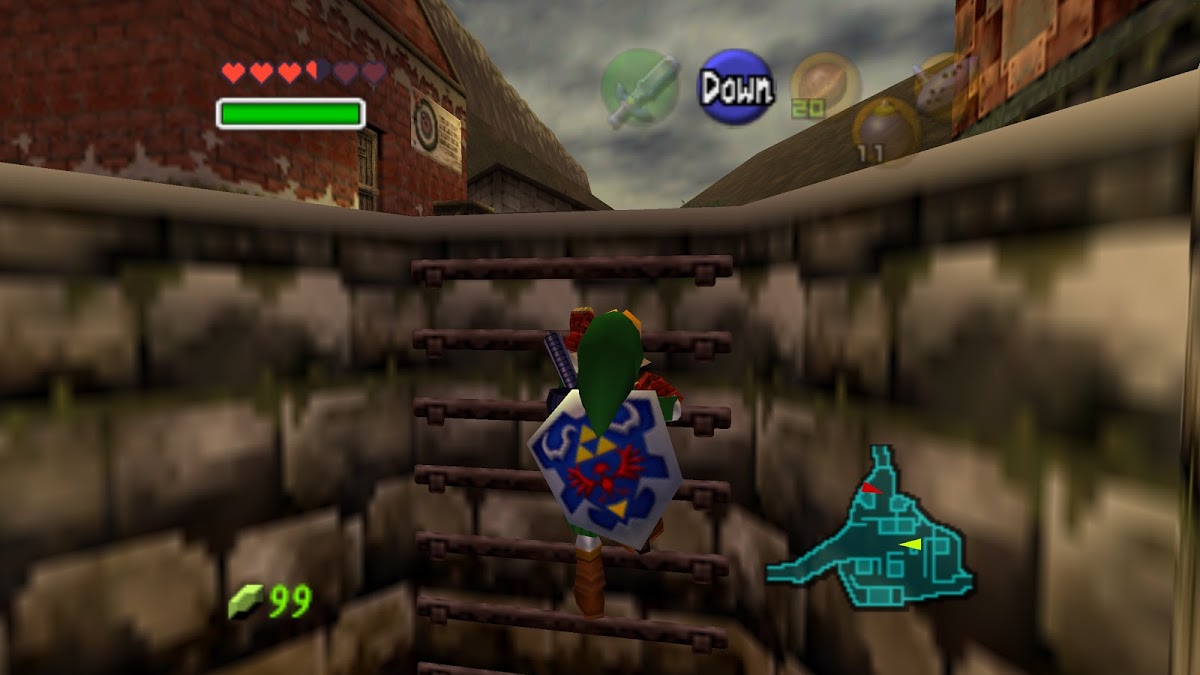 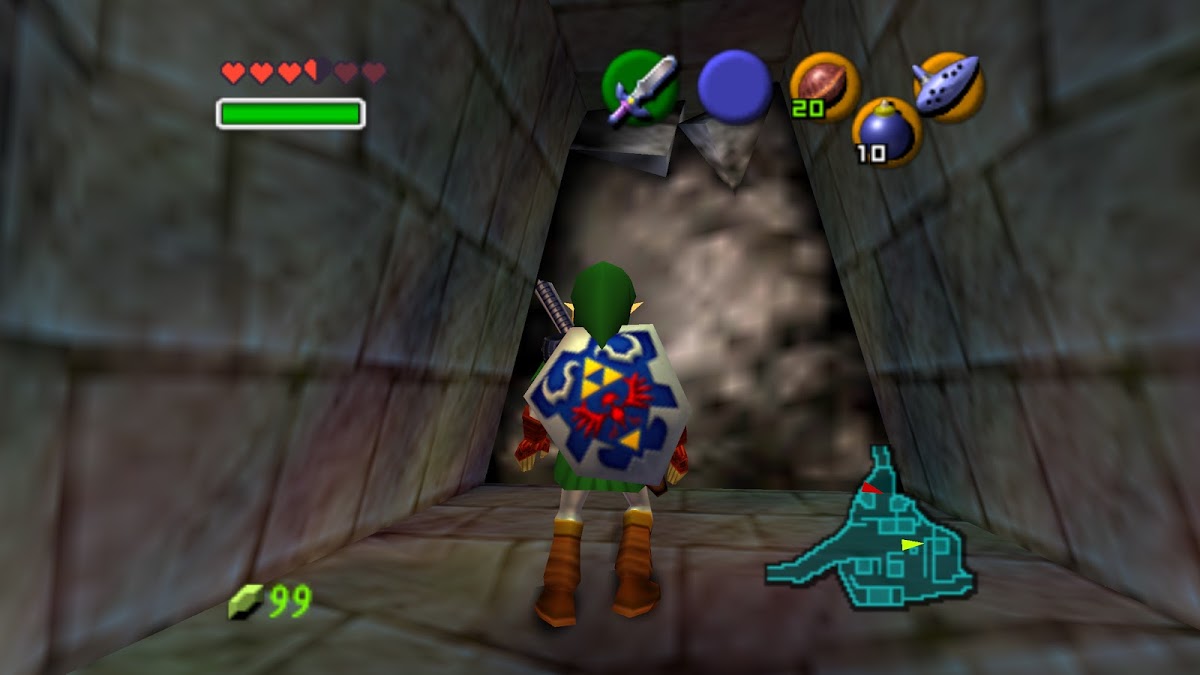 Well, that was disappointing.
I throw a bomb at it but it doesn't budge. 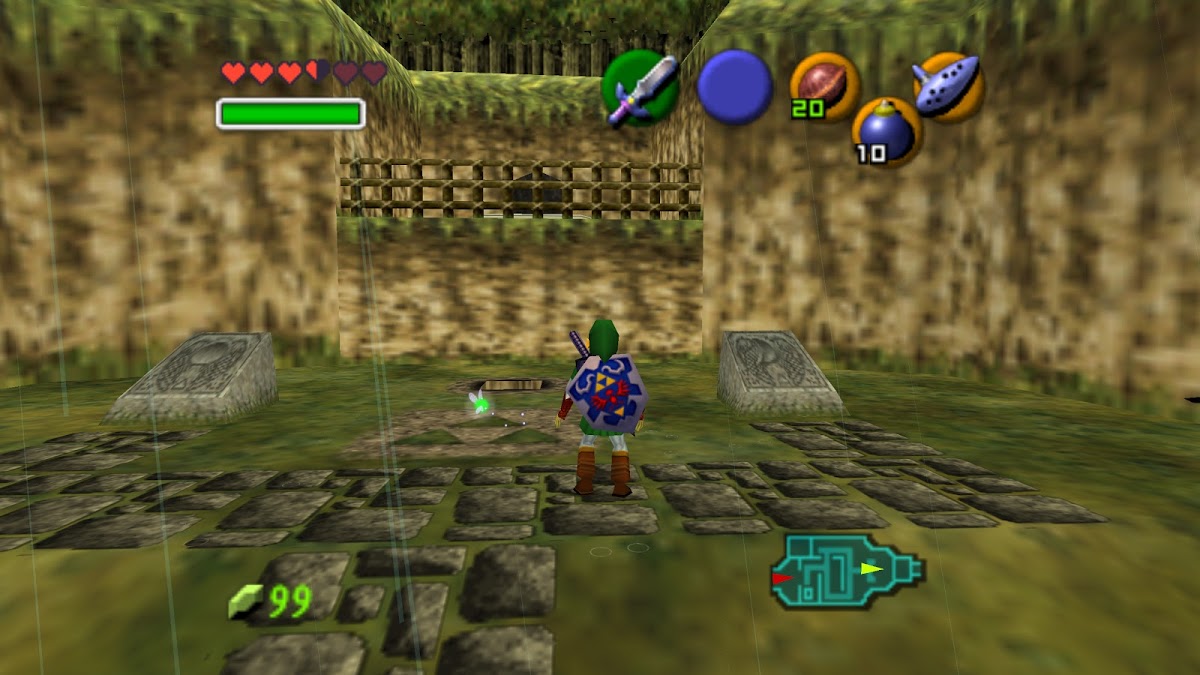 Well that looks like the same. They didn't rebuild the one I destroyed, I see.

No humongous monster. No Impa. No kid. No gravekeeper. Just... graves. 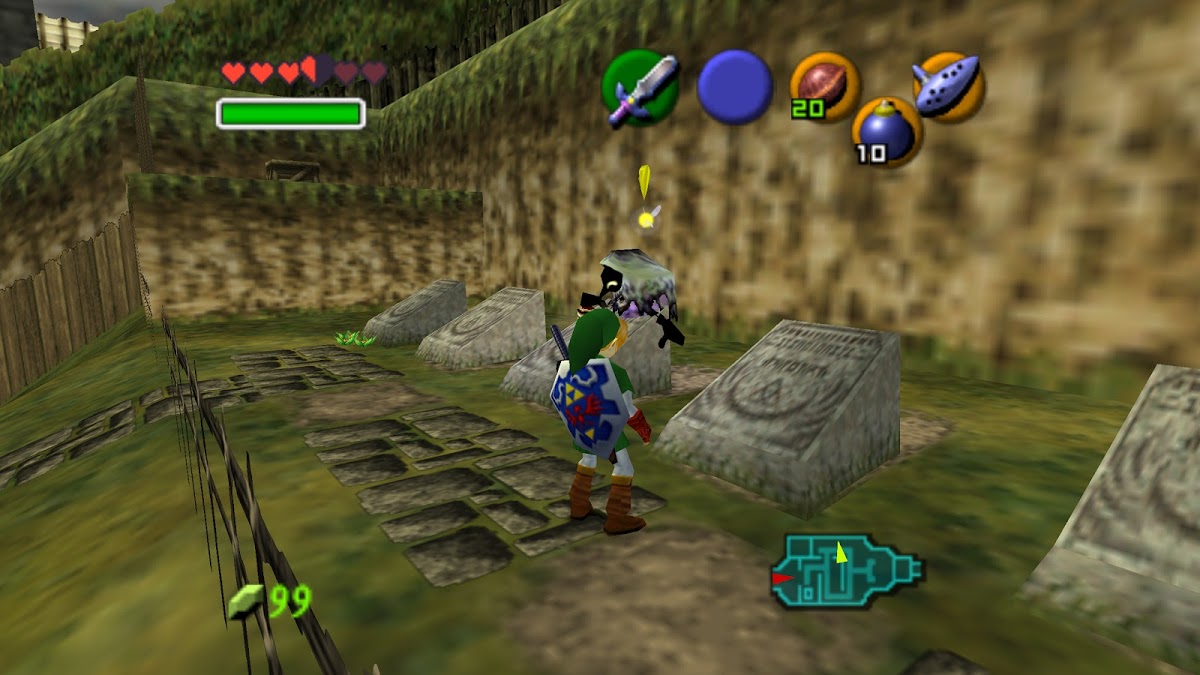 Oh and ghosts--Wait, "Poes". Naturally.
I wander a bit more around and remember that there is now a tiny shack I can go into: Dampé's shack! 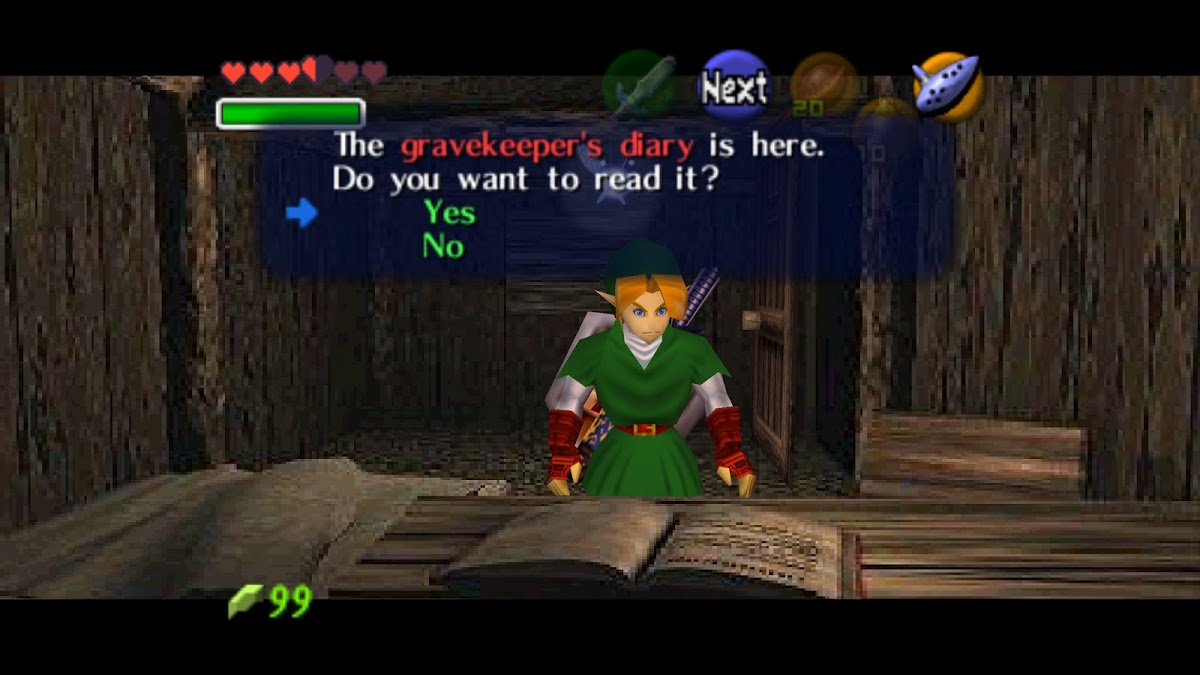 The diary says he wants me to find him in his grave, because he's got a treasure for me (he doesn't say me, specifically, but that's how link sees it, no doubt!
But... where is his grave?


So I go down the Royal Family Tomb, because maybe that's where Impa is, so I go down and reach the end and nope! Not there! Back up again!


Time to move some graves I guess!
I begin moving the graves close to the back first and quickly find a hole. 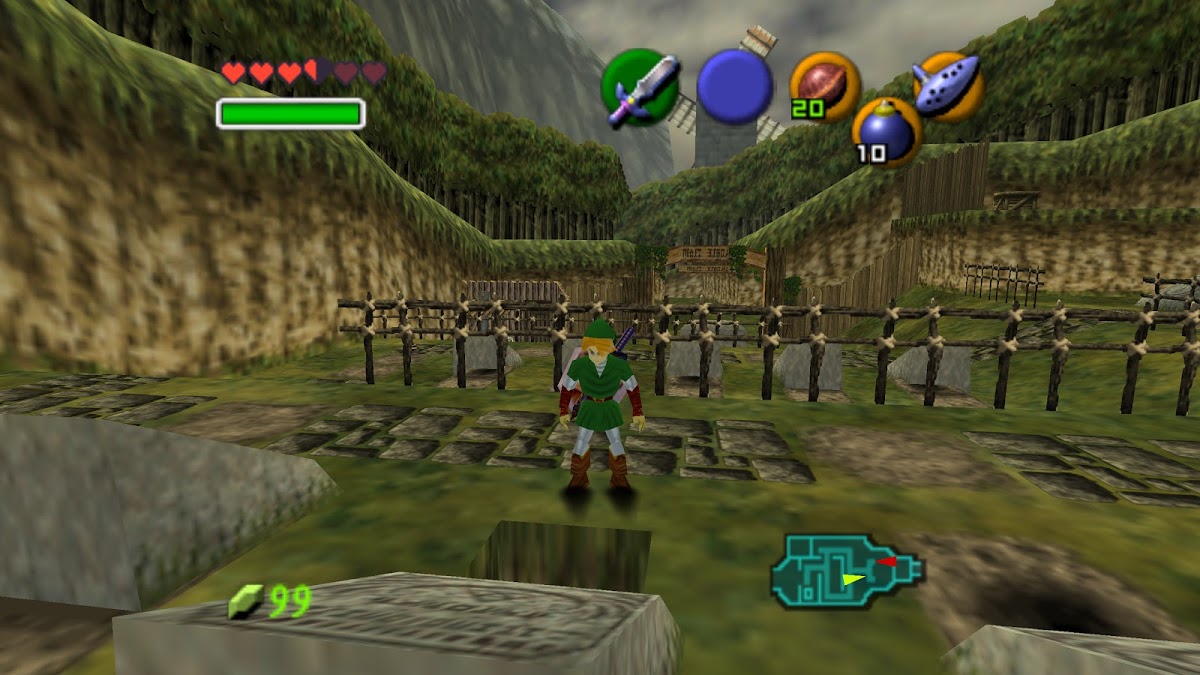 This can only go Well.

There was nothing down there. Just a single zombie. Whoop.
I head back up and decide that this is pretty silly, and remember a little cheat I noticed last time I was here. See, instead of moving every grave to see which ones has holes under them, you can actually just see it. 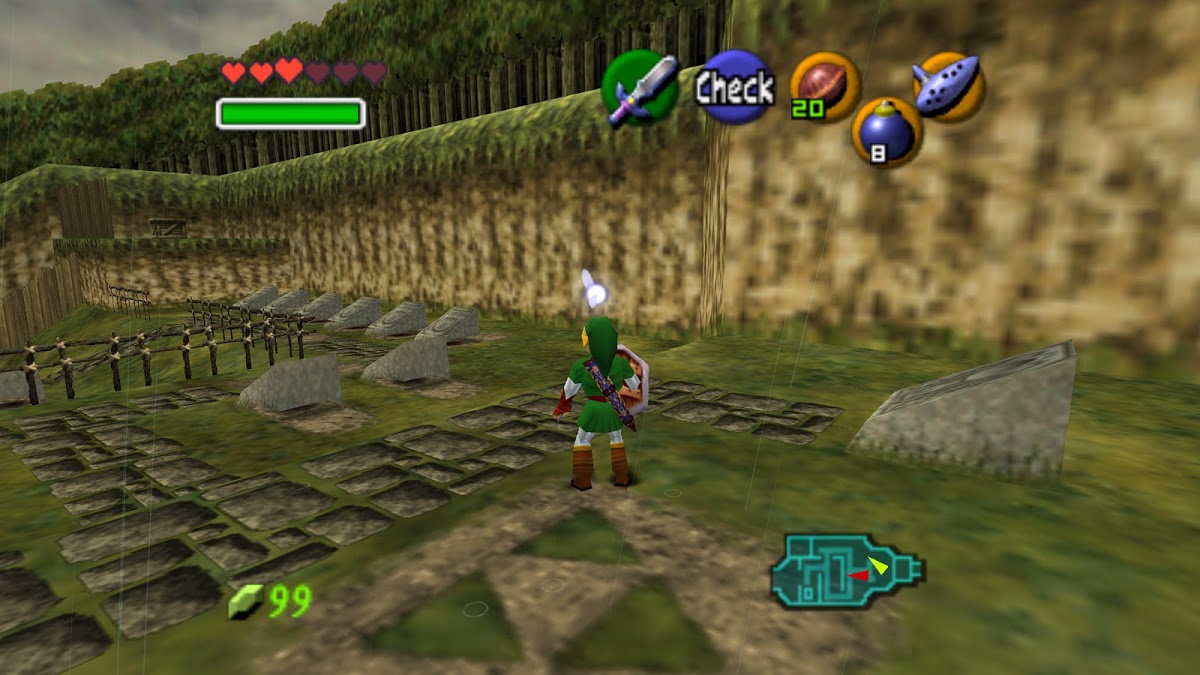 See, on that image you can see all the black spots under the graves? Yeah. Nintendo 64, everyone! The Pinnacle of Technology!
The black spot, though, means that there's no hole, so this quickly reduced the graves I needed to move down to two.
So I head down one, where there's just a treasure of 5 rupees (graverobbing!), and then go back up and head for the third one, where I notice the the three graves, actually had another tell: Namely, some green flowers in front of them to show this one has a hole. Oh, so the game actually wanted to tell me. Nice! 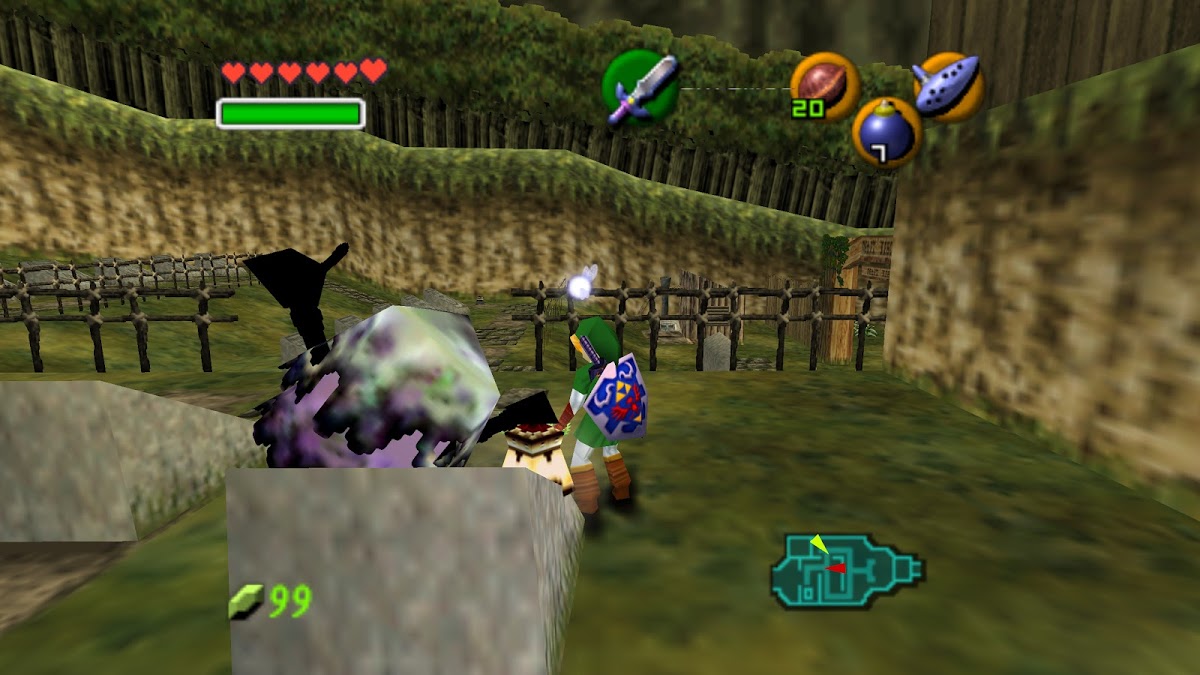 This was MEANT to be a screenshot showing the flowers, but the ghost literally photobombed me and swam right in frame, blocking both flowers. You can kiinda see one behind the lamp and Link's left hand. But, good job ghost. Ruining my screenshots, god. 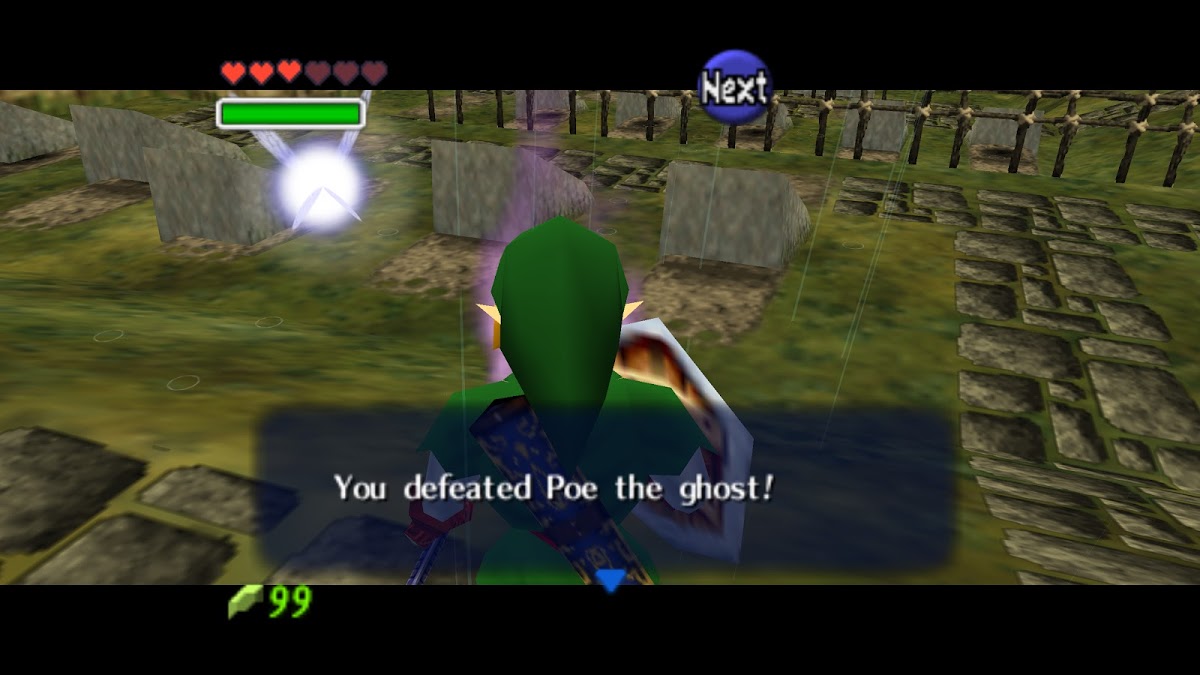 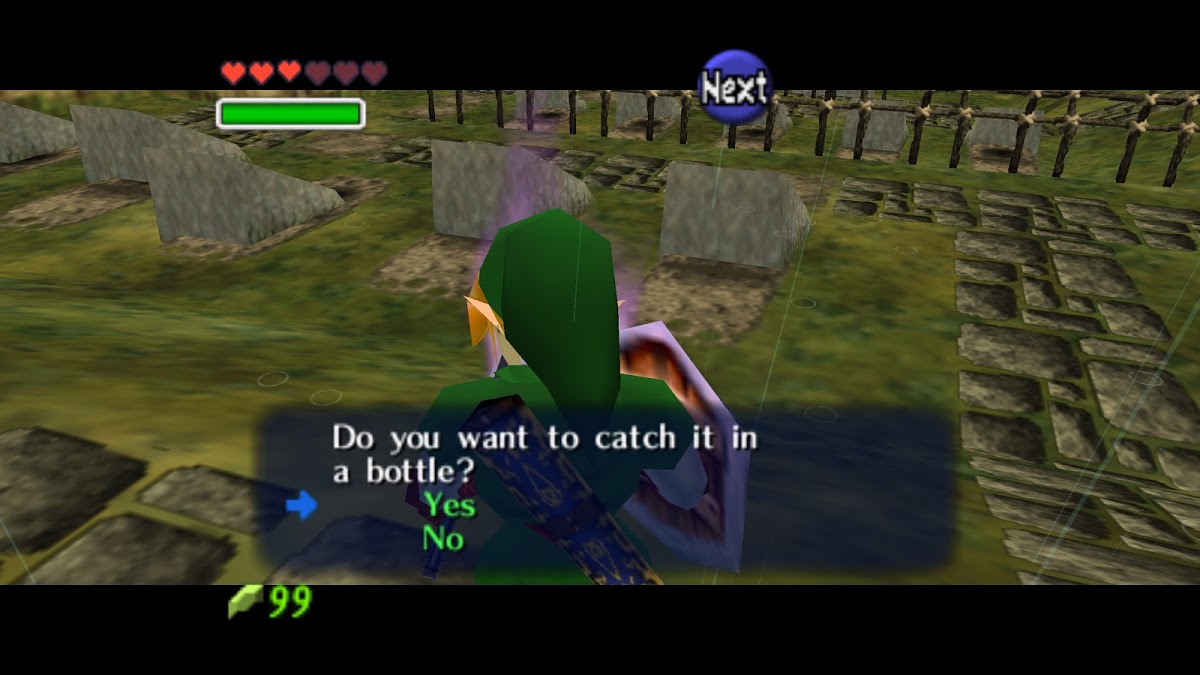 ...I guess? You can go down there next to the chicken egg!

So, down the last grave, and who do I spy? 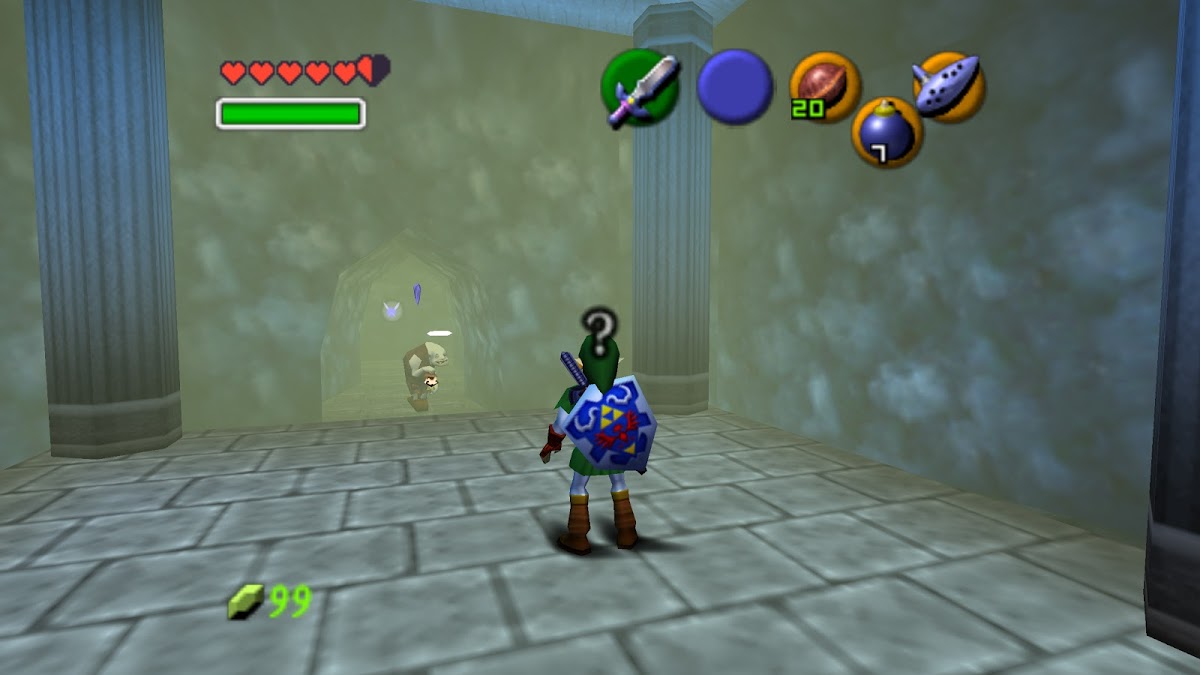 It's Dampé the... Angel? He's got a halo. That's more than a little suspicious.
He wants to challenge me to a race for no good reason and I don't really have a choice so I sprint after him while he flings fire at me to slow me down (not cool), but I follow along no problem, and eventually he gets tired and stops in a small room.
He's impressed I was able to follow him and then gives me the treasure. So, I'm expecting some small quality-of-life thing like the Sun's Song or something, as I've already dismissed this as a silly sidequest. 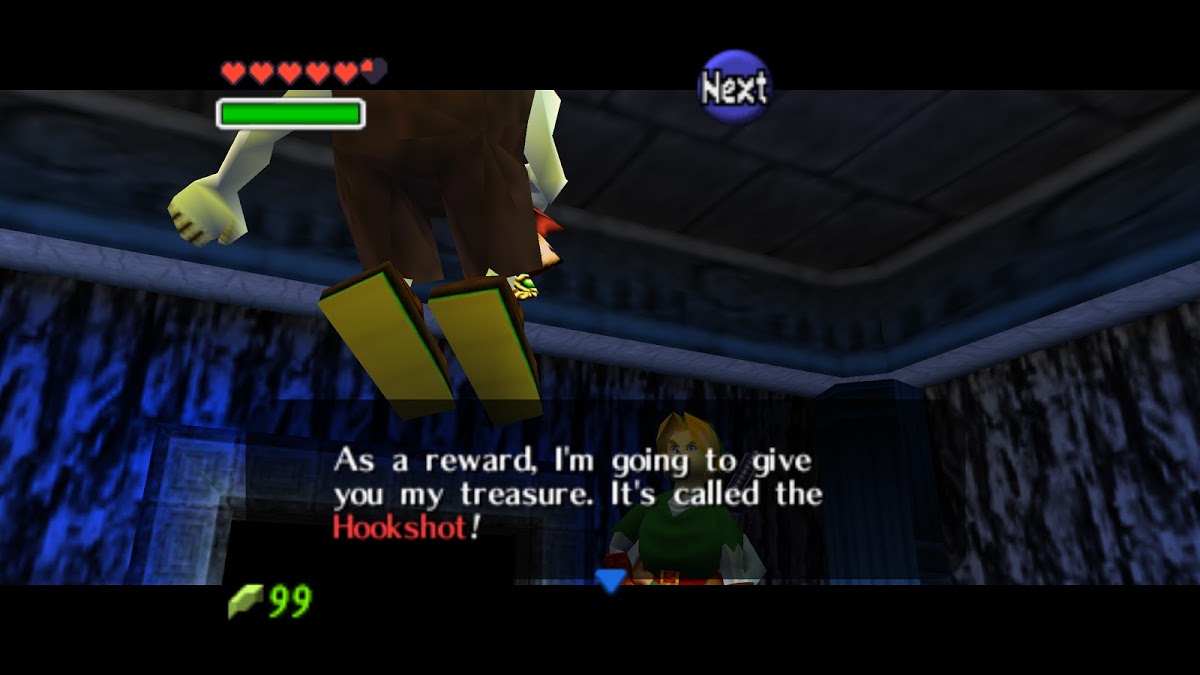 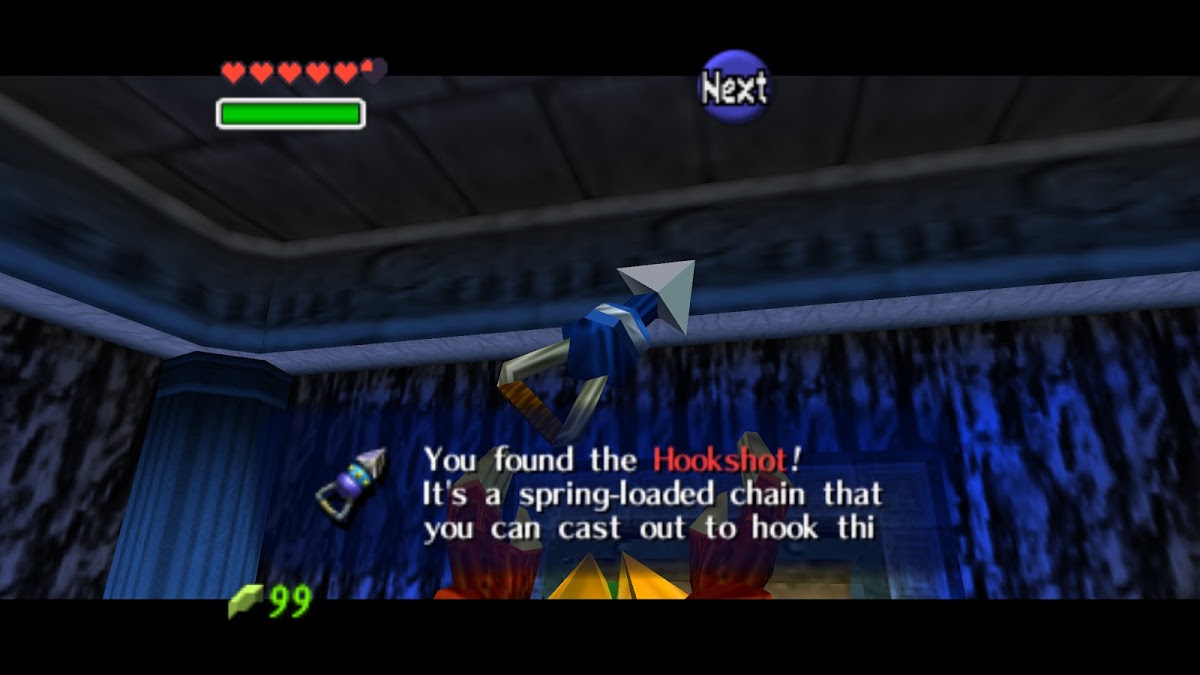 That seems... important? Was that why Sheik wanted me to go to Kakariko? To race a ghost through an underground tunnel system to get a grappling hook? If so, damn, Sheik, you got some weird ways.

Dampé disappears, and I go out through the tiny hole in the back, expecting a nice shortcut back to the graveyard, but instead I'm locked in a tiny room with a big stone thing and I can't get out.
Naturally, I think, well probably need to use the Hookshot, right? So I do and hit the rock and nothing happens.
But Na'vi hovers suspiciously over it like she does sometimes, and I eventually stand on the right spot where she wants to talk to me about it. 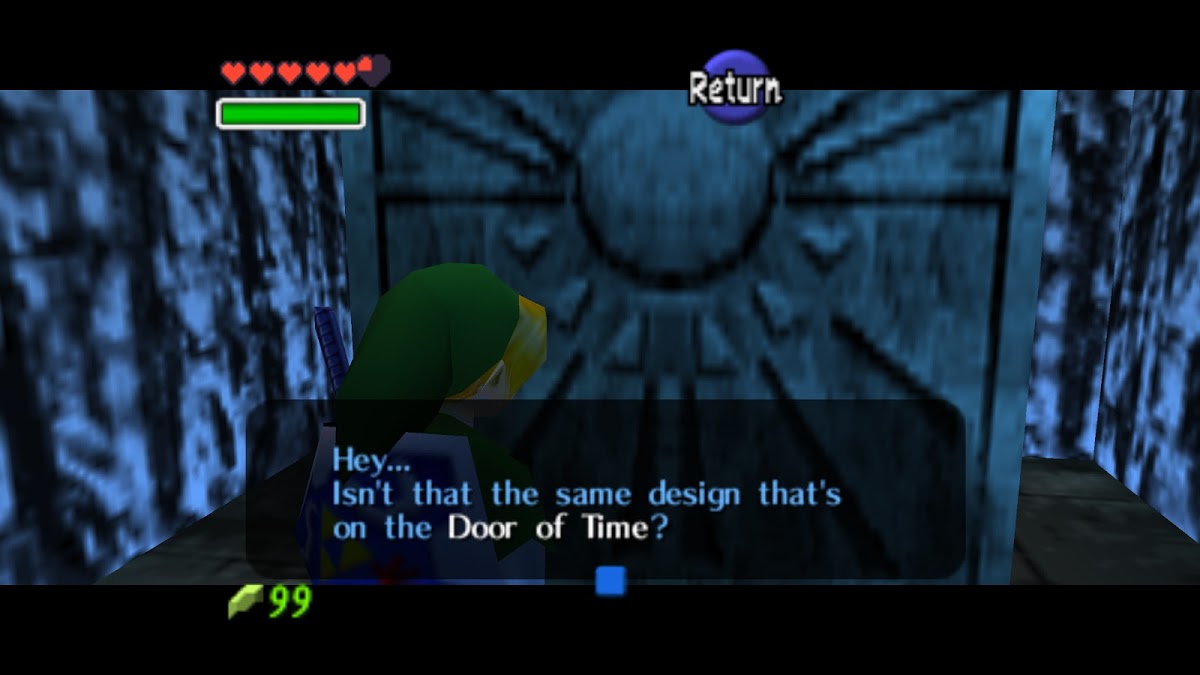 I don't know, you tell me. I didn't pay much attention after I got this nose.

So guess what? When In Doubt, Play Zel---The Song of Time. 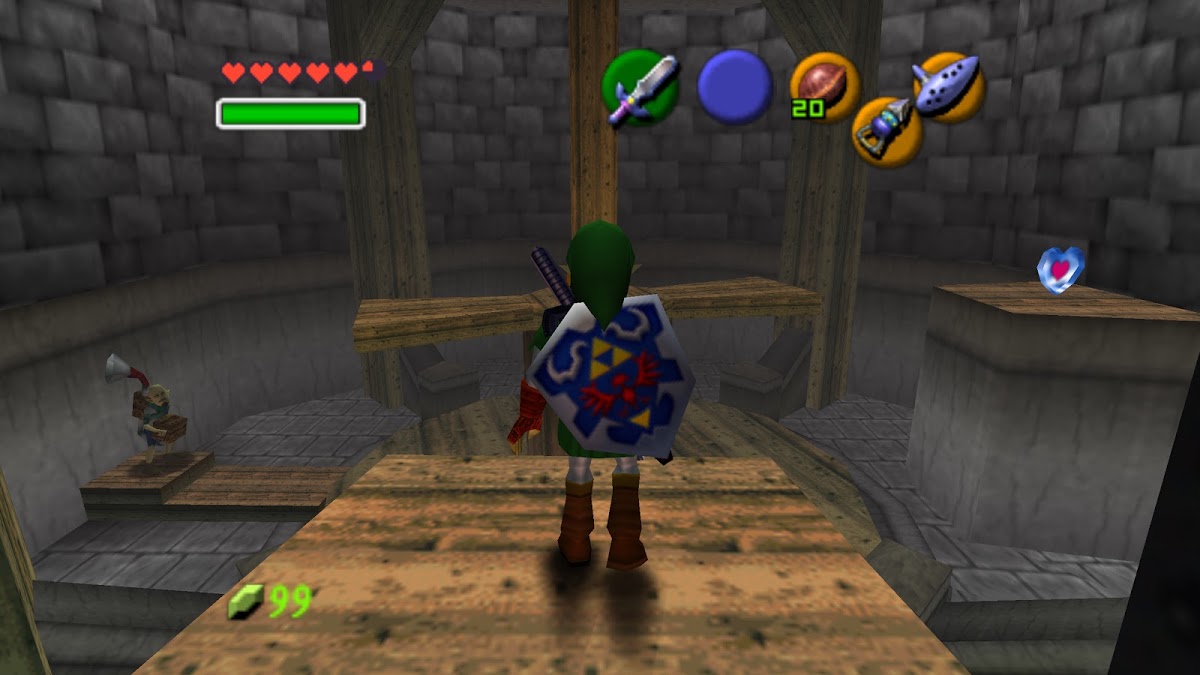 And look where I ended up! Right where I want---

Oh, so let me just, uh, casually jump up here and get the heart piece and, yep, just landing back down, and... oh hi! Didn't see you there. No, I still haven't seen that Ocarina kid, oooh, when I do though! You betcha! Have a nice time! Great song, bye!


Phew, that was close.


So that brought me no closer to Impa and what I probably needed to do in this village, except I did get an important quest item.
So I spent a little longer running around, making it night, going to the graveyard and around the town, and day again, to see if anything was different and well, no, it wasn't.


BUT: When I did that, the "Pocket Cucco" I was carrying hatched! (speedy delivery), so I think I better bring it back to the lady, yeah? So I do and shove it right in her face. 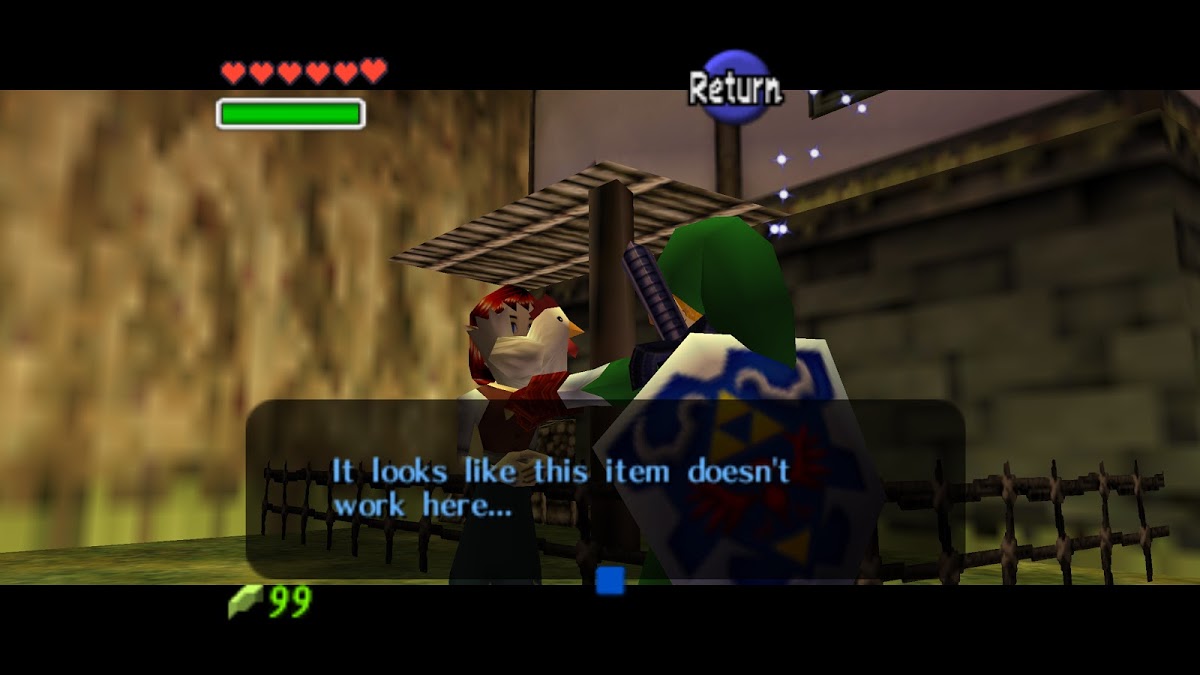 No? Uh.. Please, lady, take it. I don't want a chicken in my pocket. They make noise and shit. And I can't go around Heroing if I smell, now can I?

But no, she doesn't want it like that. So I go in the chicken coup and try the same thing. 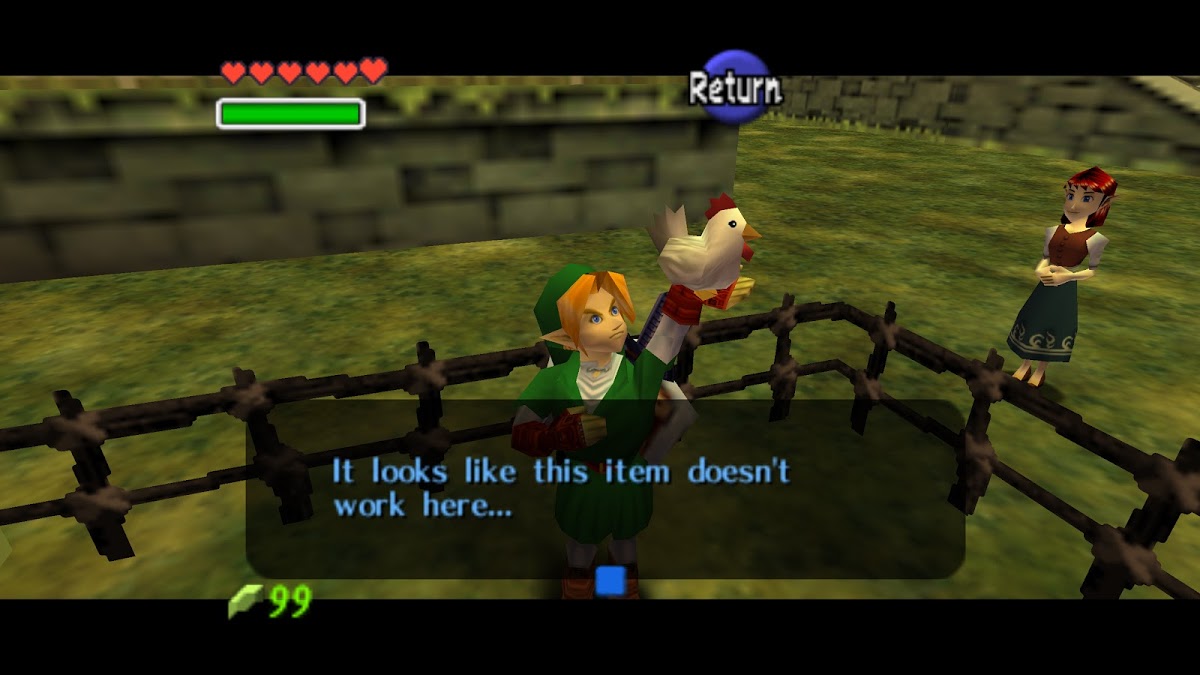 Link's real proud of that chicken!

..ookay then. I'm lost. Whatever, game. Let's find out what this is all about another time.
No Impa, no obvious story quest, no direct next goal other than, "Go to the Forest Temple", but I'm not sure I'm ready yet? Maybe I did just need the Hookshot.
But like, I didn't get any tutorial for how to use it. Usually, you need to use these kinds of items at least once, so you get a feel for how it's used, but uh... I've no idea.


So I guess next time is Hookshot experimentation time!
Come back for the Wild and Crazy Things We'll Try To Shoot With A Pointy Thing Attached To A Chain!
It'll be fun!