Last time, we got stuck in Korokiro village after we chased what I thought was a sidequest but ended up giving me a Grappling Hook, which seems like an important item. So now, that we might've actually gotten what we need... let's go to the forest and check out what's going on there!
So I run outta the village, through the empty fields and is greeted by the first of the new inhabitants 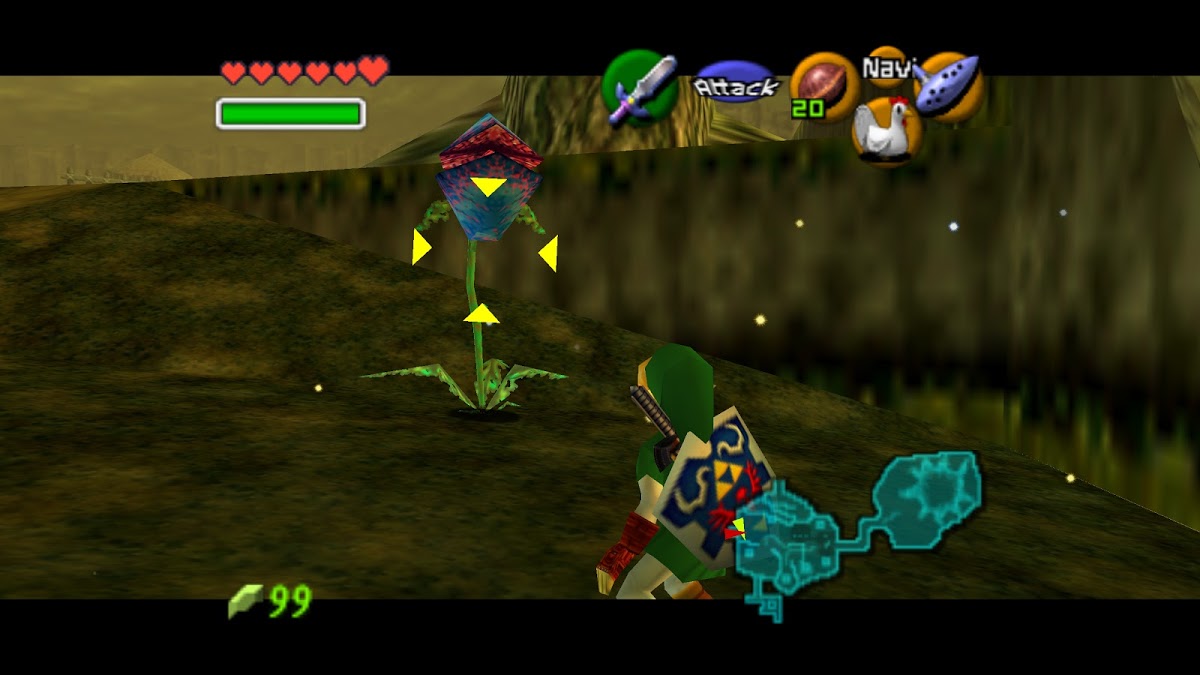 So this place is just as hostile towards me as it was back then! Alright! 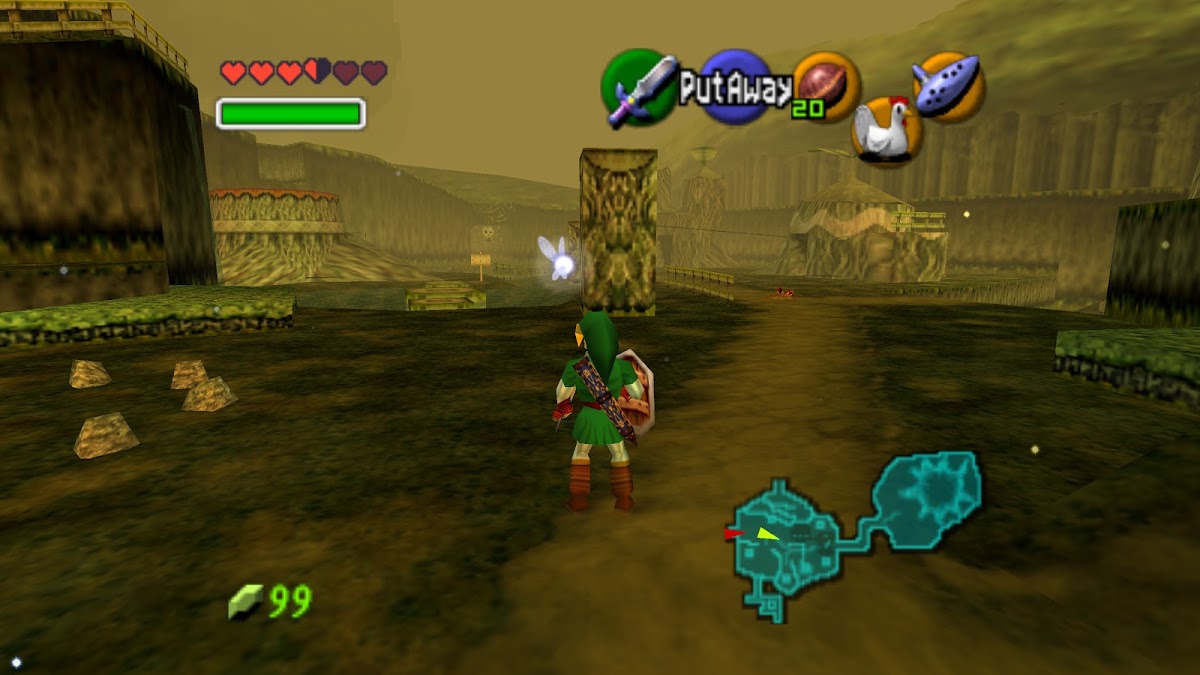 It also turned yellow, which I must assume is an aesthetic choice.

So, the first thing we do is go into Mido's house.
Partly because it was the first thing there, but also because, hey it's MIDO'S house.
If you don't remember, Mido was the bully who didn't want to let us leave the forest way back when we were brand new at the game. So, the game clearly doesn't want me to like him.
So you could go into his house and rob him blind.
And guess what: 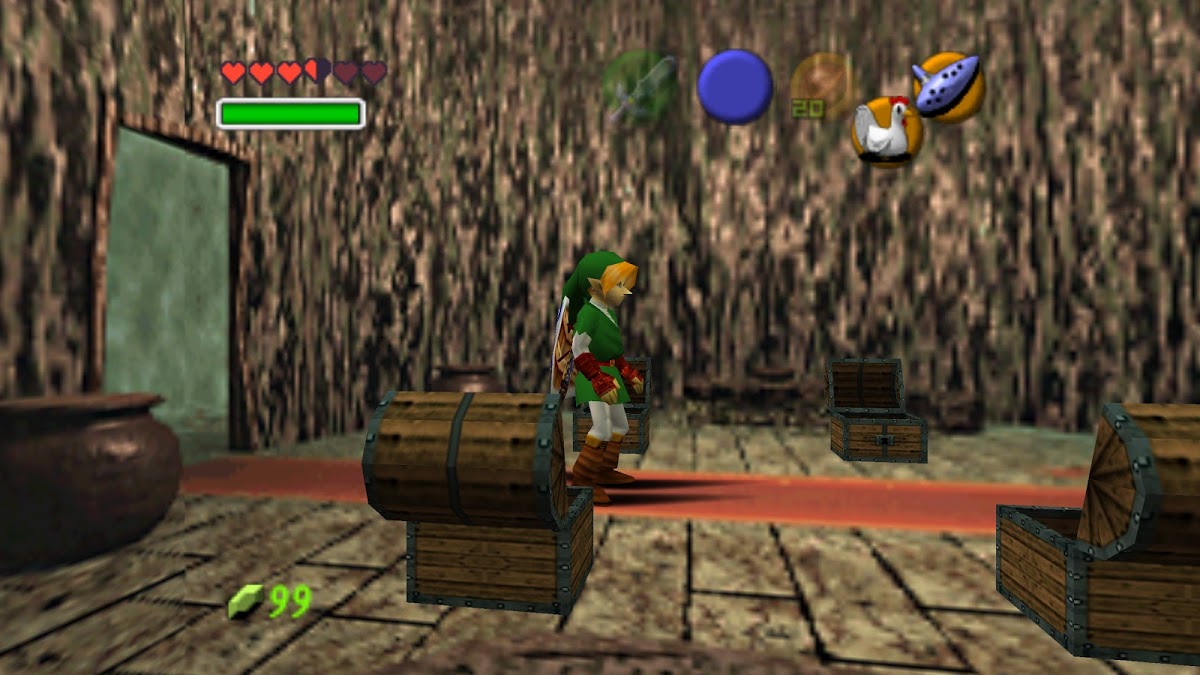 It's still robbed. He did nothing, for seven years, to refill his chests... I'm almost disappointed.


But turns out, in the back are small small fairies, who, no wonder, are a little bit skeptical of big ol' me. One questions how I have a fairy following me when I'm clearly not one of them.
The other one is complaining that there are monsters in the village that weren't there when the Deku tree was still alive, so now they have to stay indoors.


I go out and go into the other houses to see what they have.
The shop has the exact same inventory as it had when I was a kid, and that seems a little strange... but no biggie. 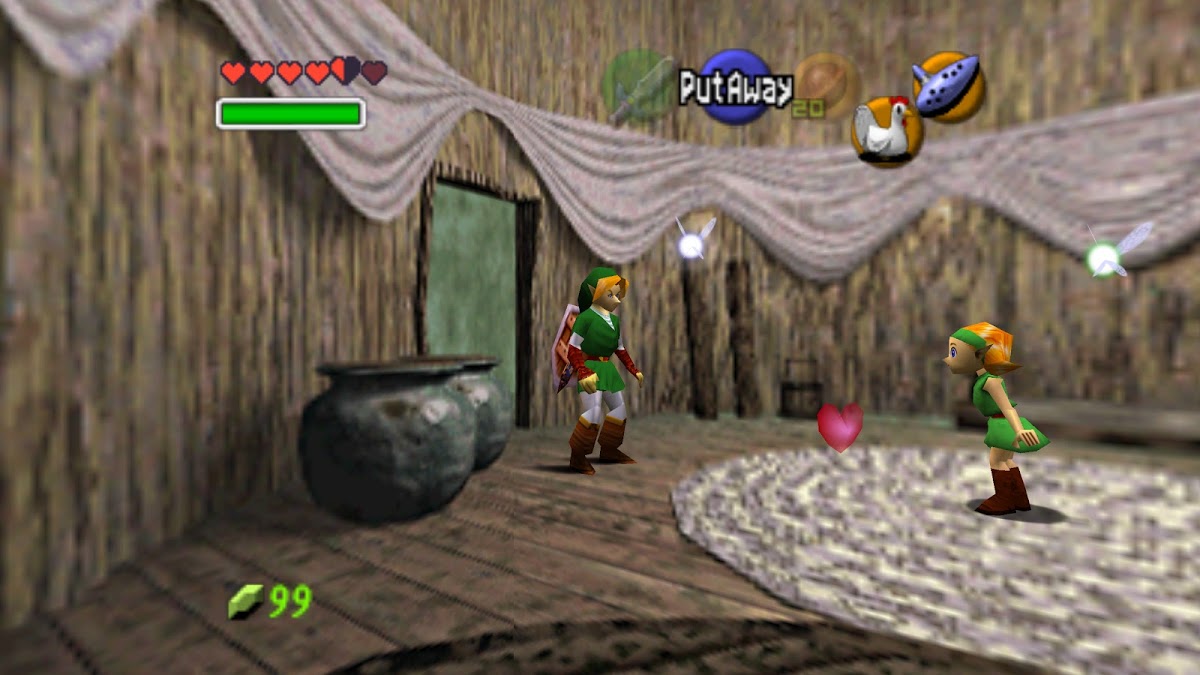 What ya looking at? Never seen a long nose before? 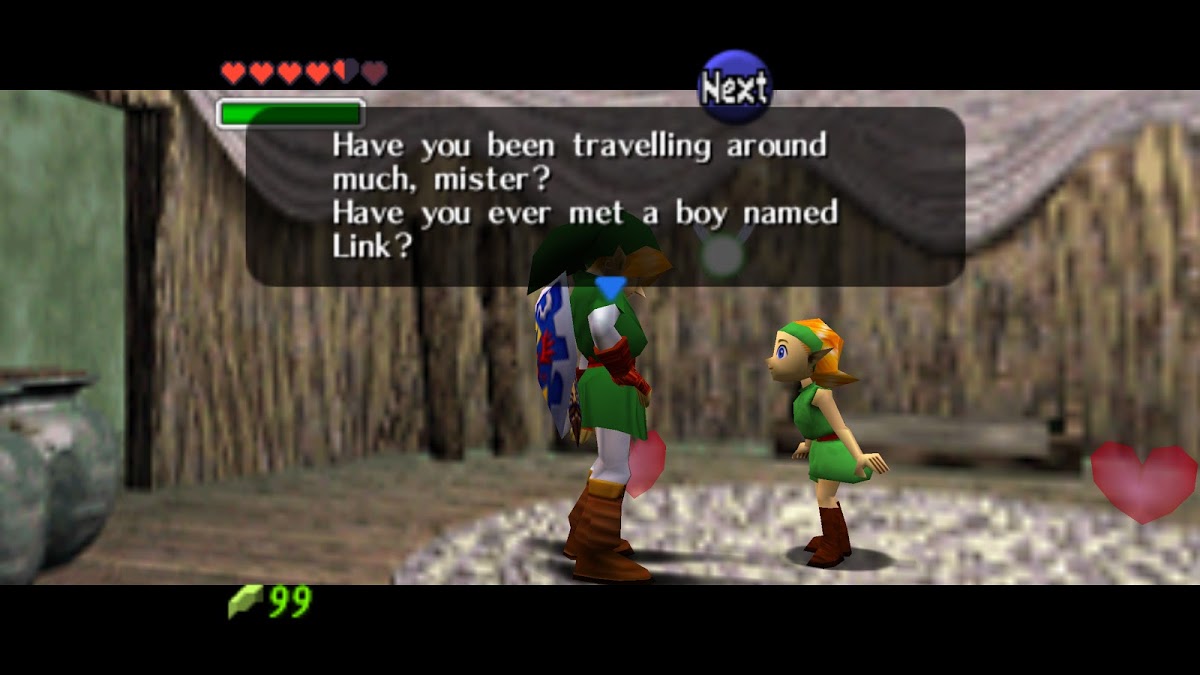 Oh boy have I! 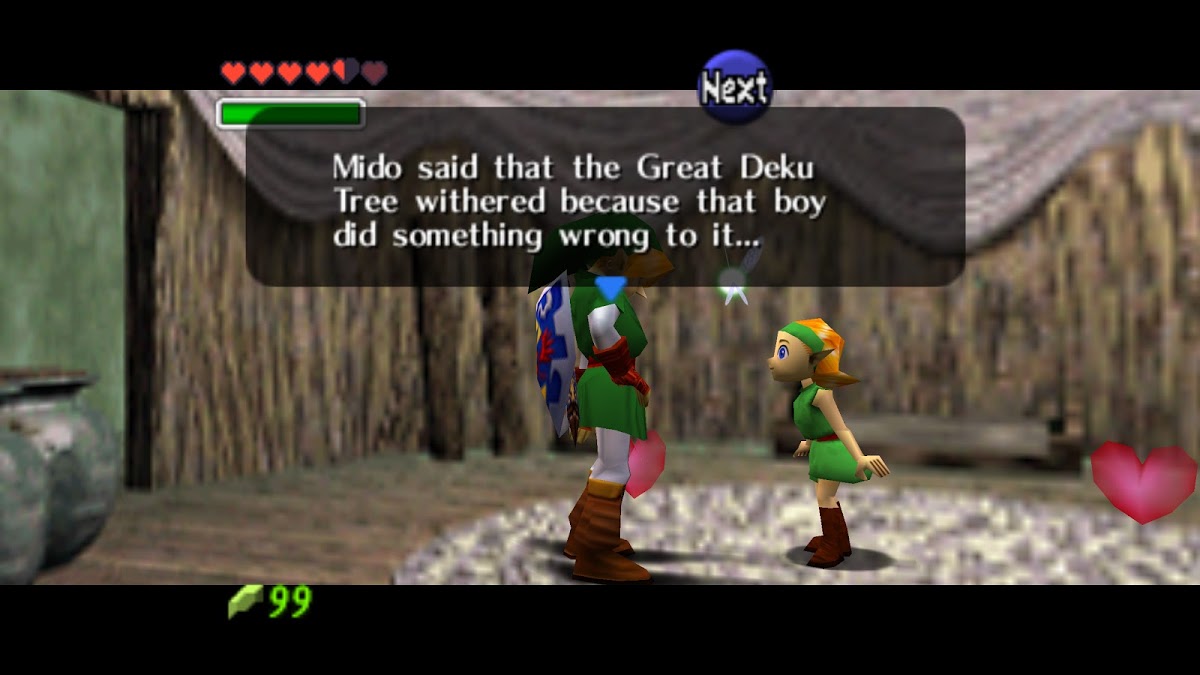 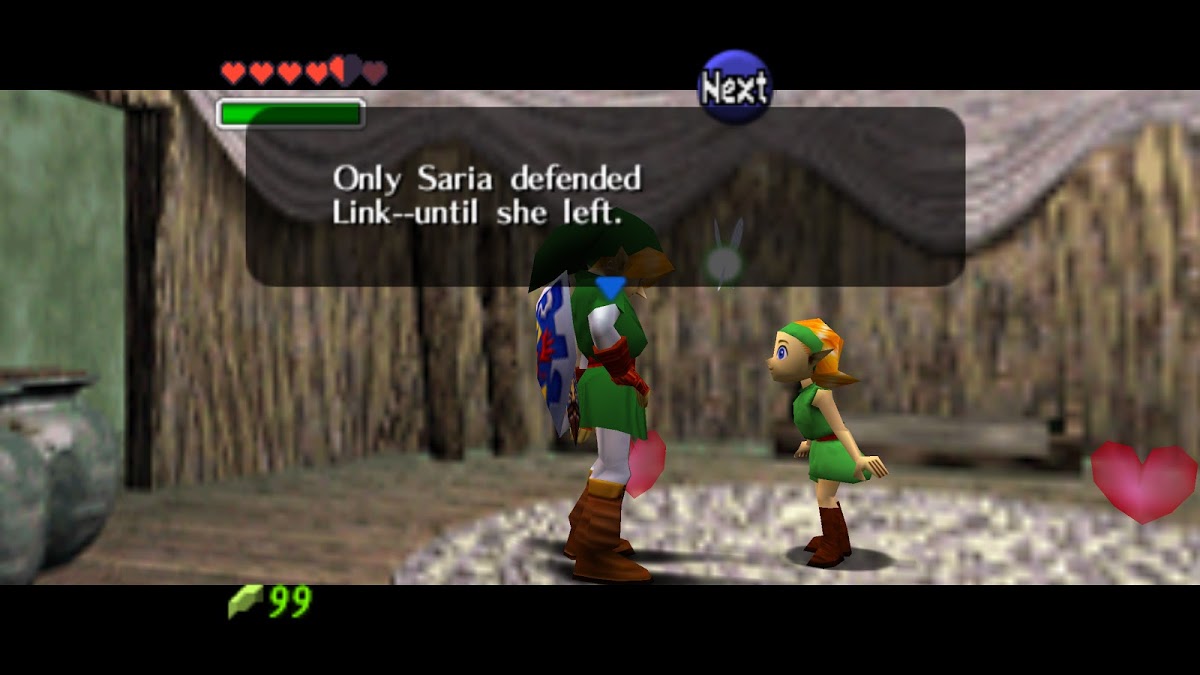 Right move on Saria's part (leaving, that is) 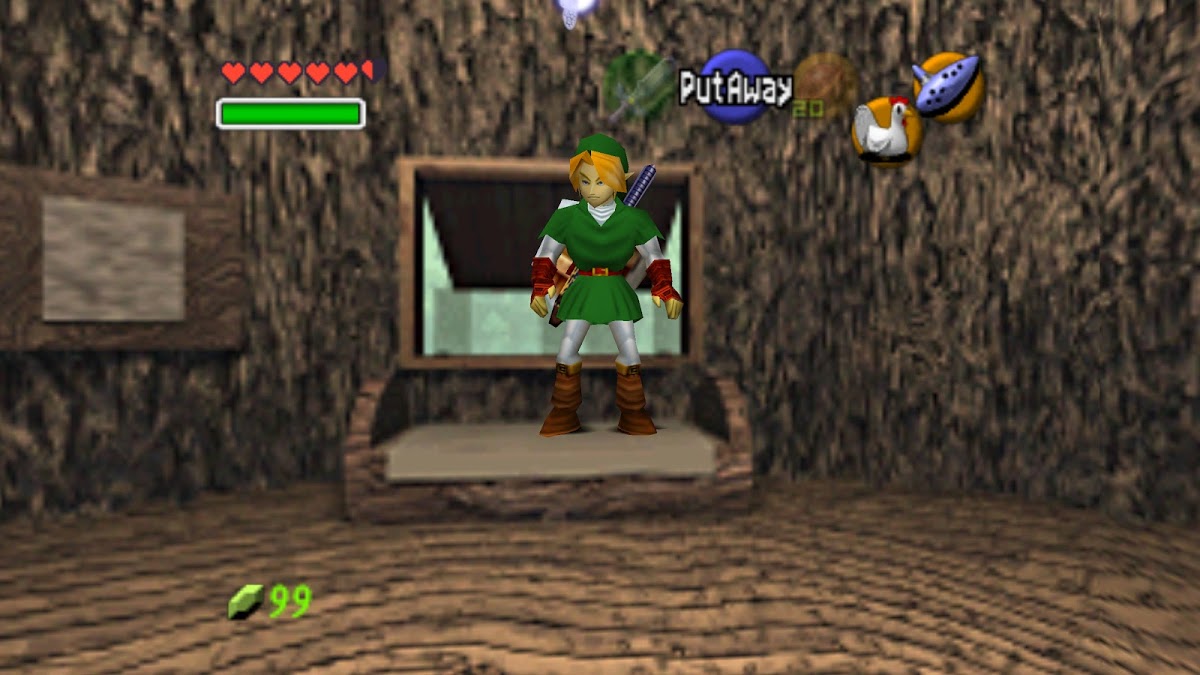 And a visit back to my old bed, the very opening of the game. Link doesn't look like he misses it.

And then I go back out to the Deku Tree and, yep, it's still dead. 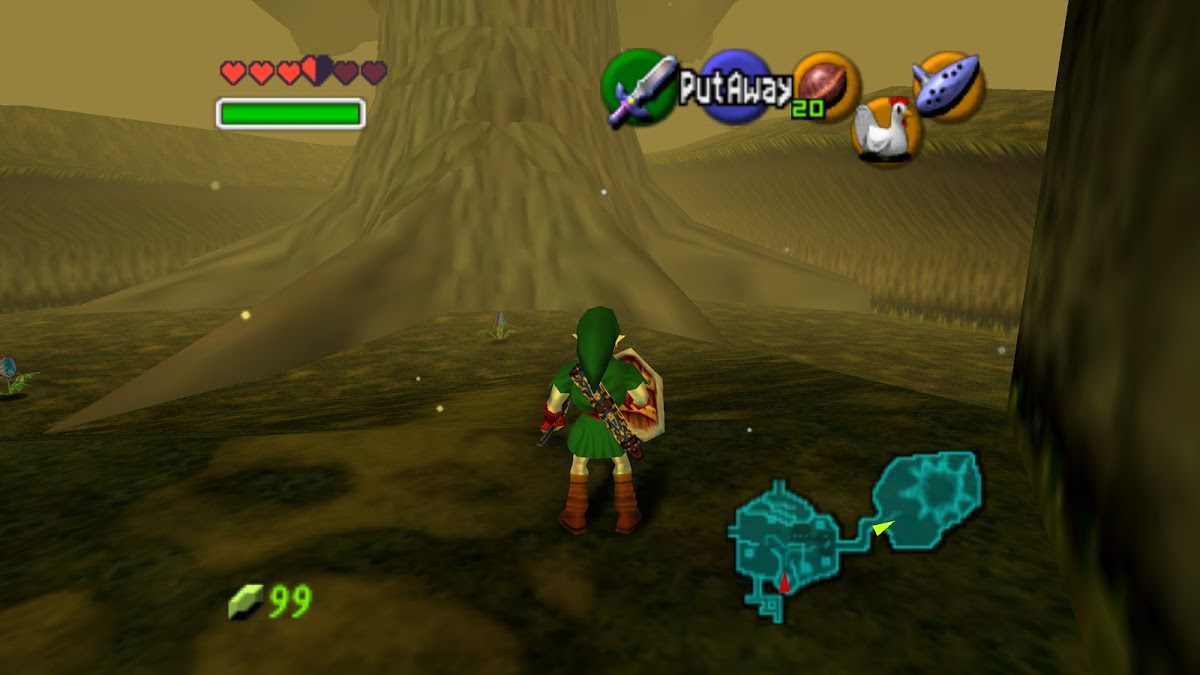 And that was the entire village, no temple in sight. So I guess I got one more option available: The Lost Woods.
I'm a little leery about this, because I'm not sure what the Lost Woods can offer that isn't just passages to other places, but maybe I'm wrong, so I go in there and have a look. 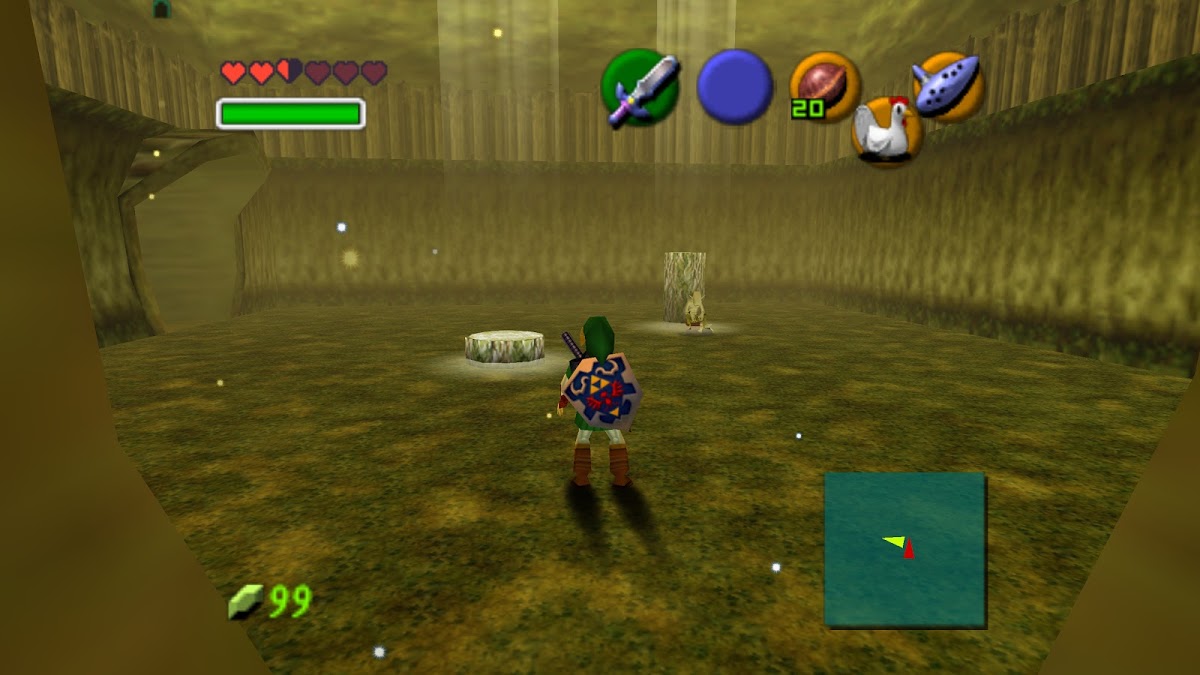 This screen used to have dancing forest-plant-guy on that stump. Now there's a dead--excuse me, sleeping--dark souls-like fella... A bit spooky.

So I go a bit more around the close area of the Lost Woods, but soon give up. If there's nothing immediately, it can't be there, I'm guessing.
So I go out and go to the last resort: Go back to the Temple of Time.
Maybe, if I did progress, Sheik will have something new to tell me. 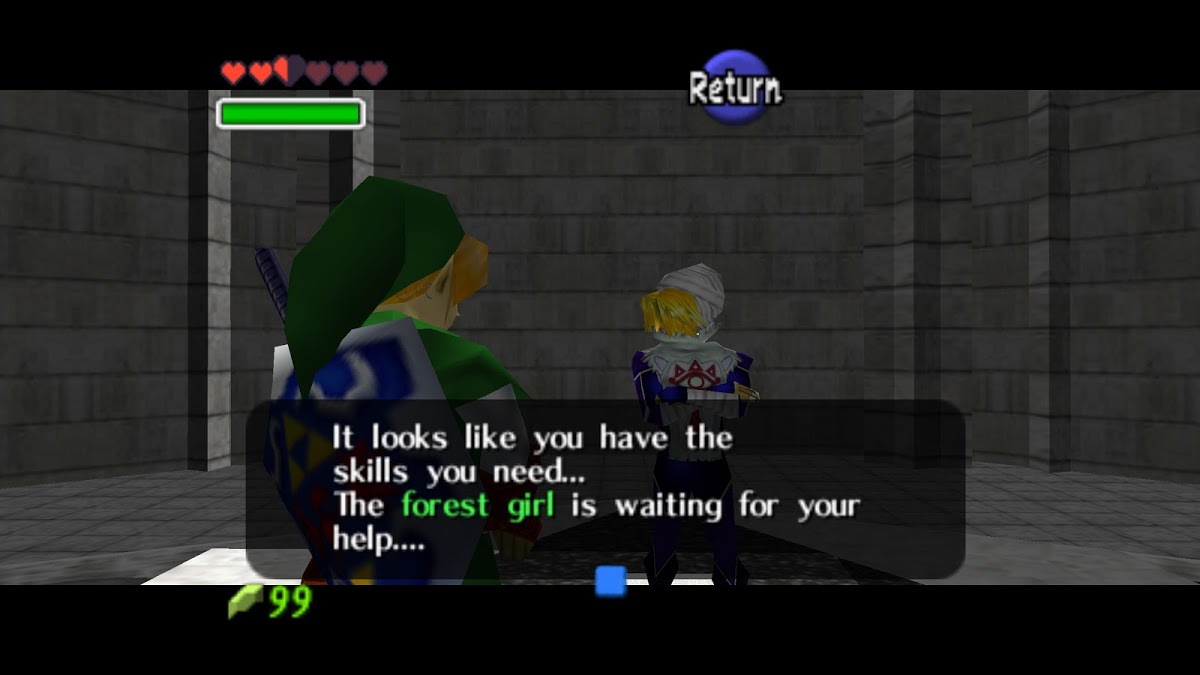 And sure enough, she now says I have everything I need!
A hookshot and a sense of not knowing where to go is indeed all I need!
And the forest girl, you say?
Well, I got just the song for that!
So I play Saria's Song and she does speak to me: 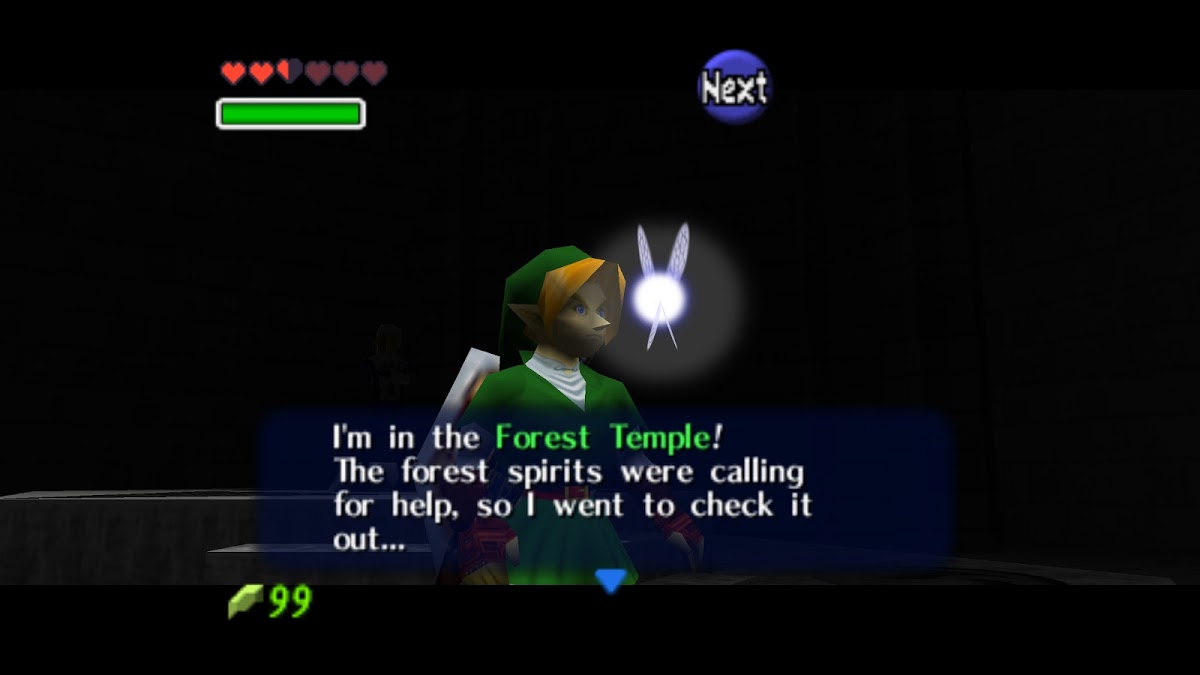 Great! Where is it?


Ok, fuck it, I cheated a little and found out that it was actually in the Lost Woods... Welp.


And I go back and whoop de bloody doo 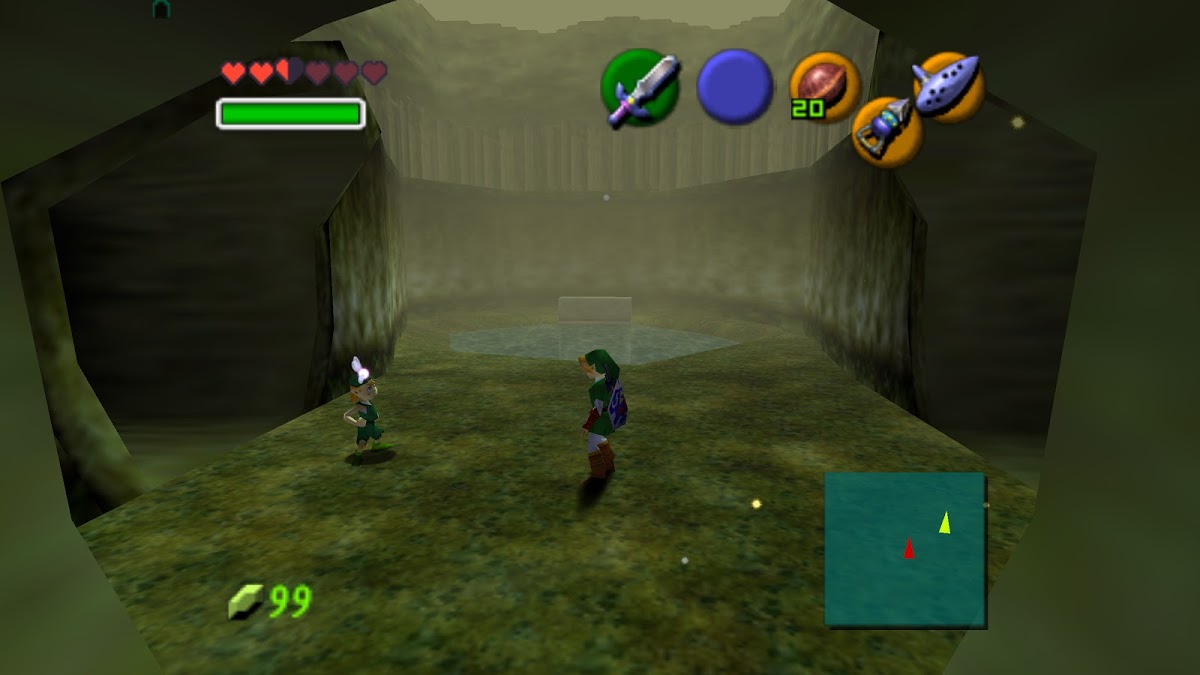 It was literally one room away from where I stopped.
Wait, isn't that... 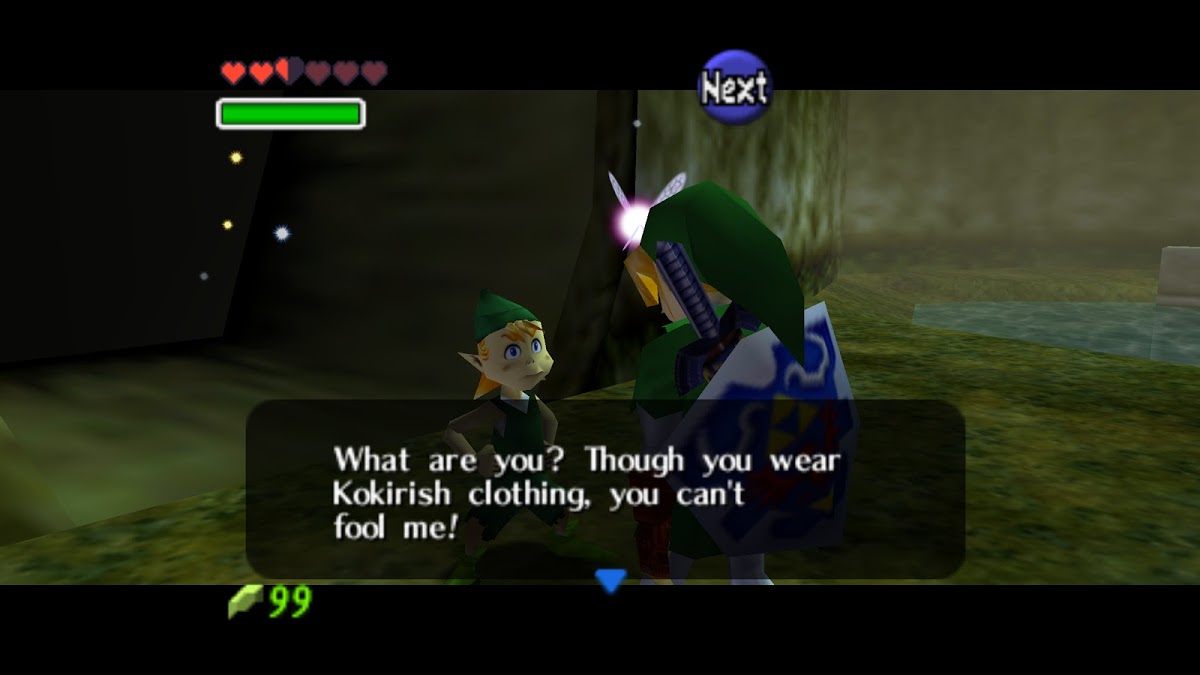 Wait, so he's also still a kid... Does that... does that mean that Link... isn't actually a forest person? If forest kids don't grow tall in seven years?
That'd explain a few things, I guess.
Then he says he's there to guard because Saria told him not to let anything through. And that's a bit surprising, because why would Saria entrust Mido with doing that? Knowing that, if Mido actually recognized me, he most definitely wouldn't let me pass?


But no, I just play Saria's Song and he's all impressed and I can go through. 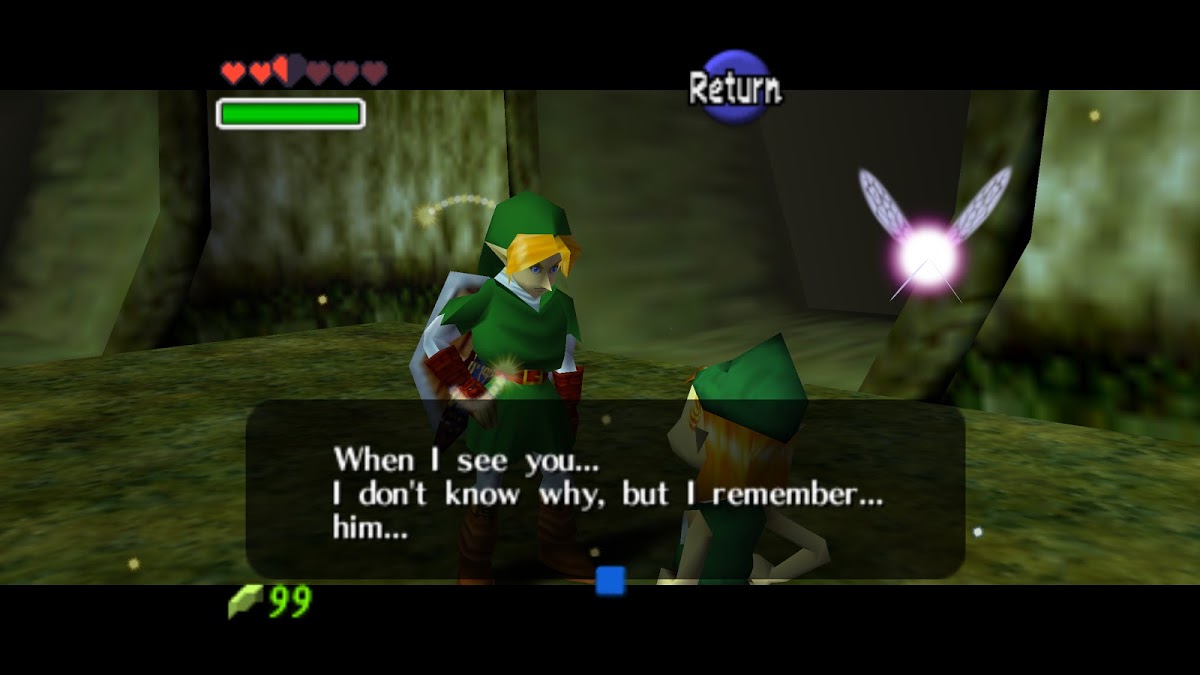 You sit here and think about that while I go do Hero Stuff. Also Link looks angry right there!

But behind him isn't just the temple, but more Lost Woods fun, with three rooms of three identical doors and any wrong doors takes me back to the beginning, so I stumble a lot back and forth until I finally find what I'm looking for. 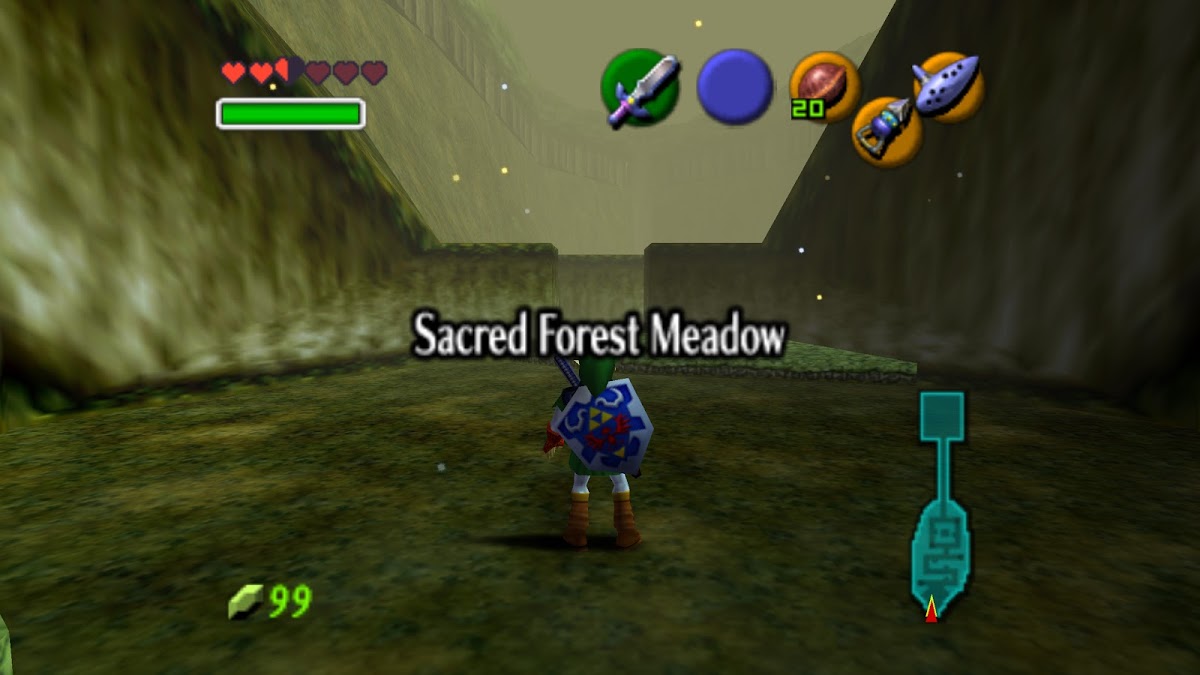 Ah, right. I guess that makes sense! That's where Saria was before. So she'd be here again! It's just through this maze! Except... 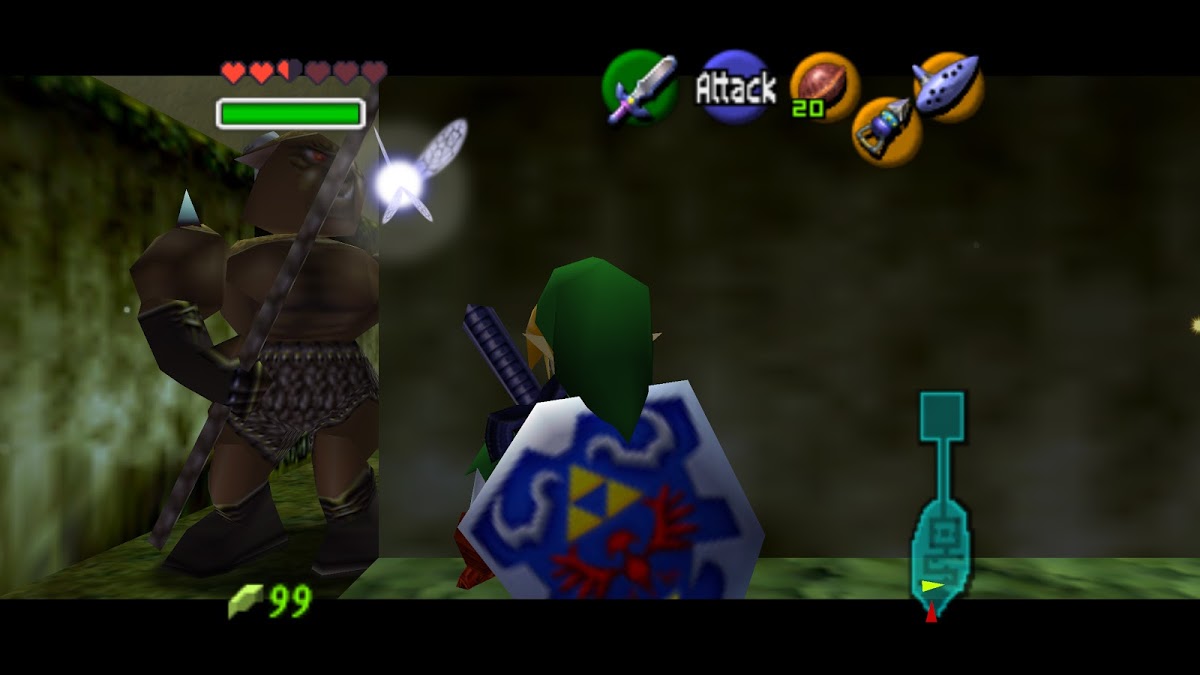 Eh.. Mido, you did a bad job letting no one through...

Except there are large cat-people.
And lemme tell you, these people are not friendly. Just before I enter the maze, Na'vi reminds me that I can look around corners with the Z button, which will be useful, because turns out, I can't actually fight these.
As soon as they spot me in their lane, they rush with their spears and charge me at the opposite wall. And they keep doing this whenever they spot me and I can't get a single hit in on them, but instead have to avoid them as they slowly patrol around.
So, guess what that meanss......


The Epitome of Fun!


1: These cat folk walk sloooowwly. And I can only walk behind them when they are looking away.
2: Sometimes they randomly turn around for no reason.
3: It's reallllyyy slooow.


So I make my way through the entire maze, losing a fair bit of health and dying once so I have to do it all over again, but eventually I make it to the end where an even bigger cat person is waiting: 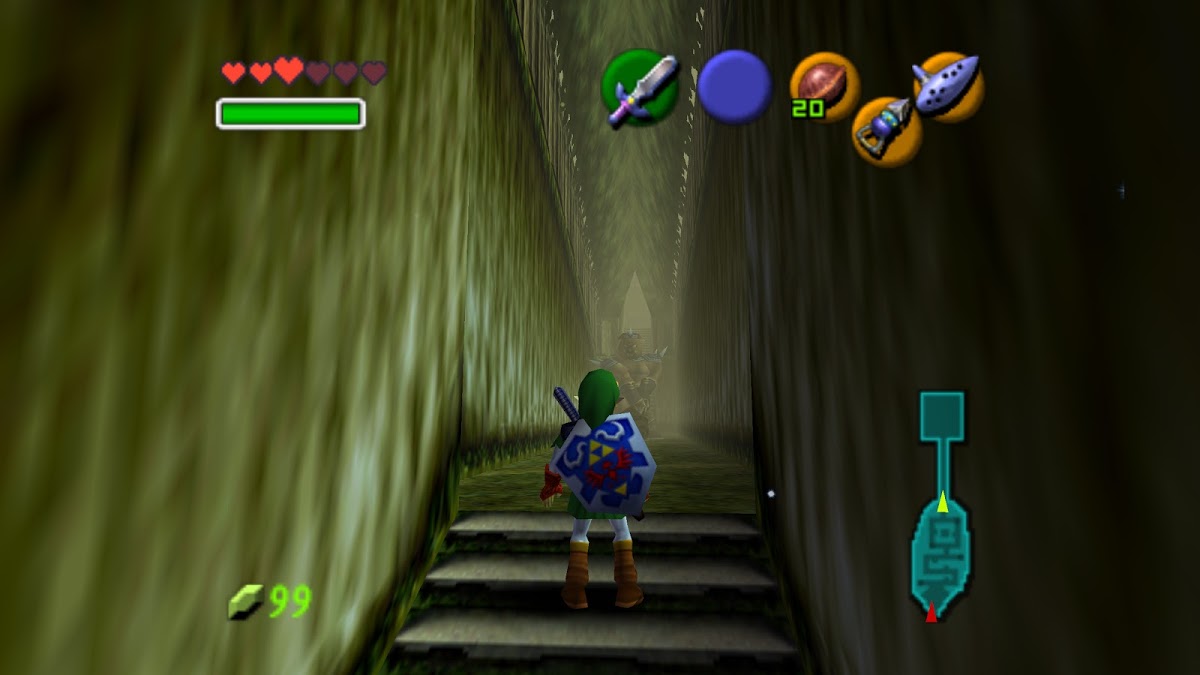 Uhh, can't exactly sneak past him..
As soon as I get remotely close, he shoots tremors through the ground that I have to dodge, but I'm bad at it, and then I get close to him and he just whacks me with his giant club and I'm dead.


Through the maze again!


I go through impatiently and die again because I'm stupid and have to start over for the fourth time. 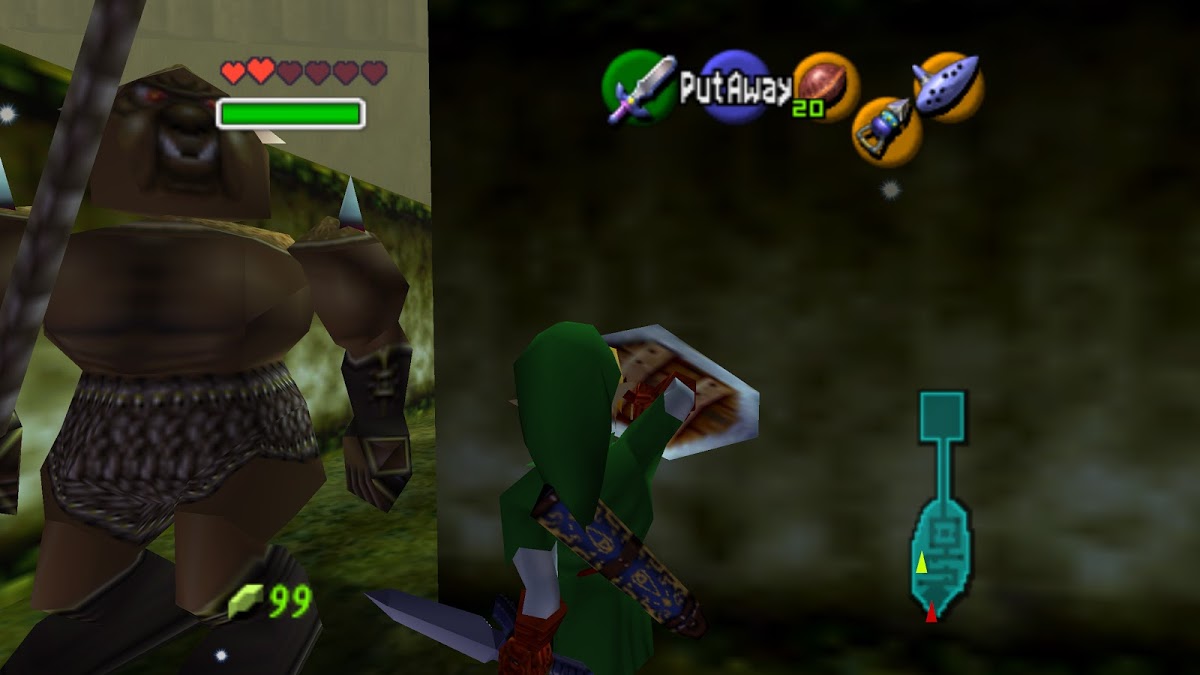 Hey there big guy. I got a shield. You don't have a shield, do you? Little jelly? 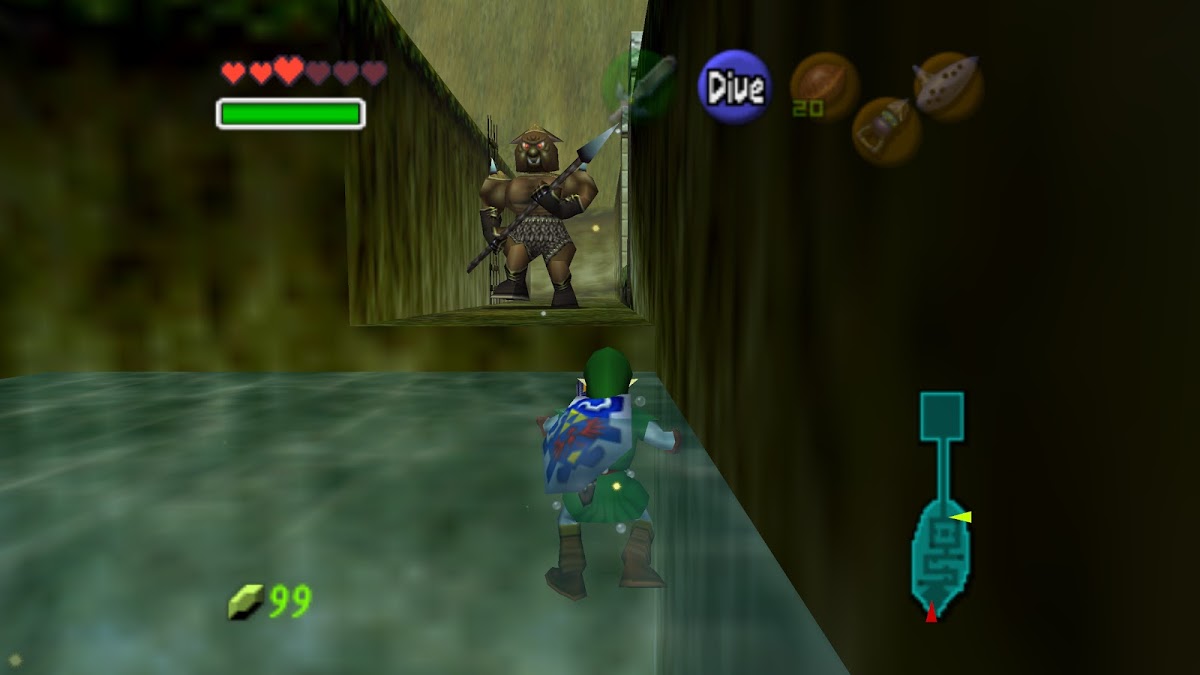 When I finally get through again, I'm kindly reminded by a friend that there's a fairy fountain in a hole up a ladder in the maze, and fairies give me full health, which, hey, I'm not gonna say no to, and also, she says I can trap a fairy in a bottle, which seems a little cruel, but useful for getting health, so I do it because I don't want to go through that bloody maze again, and now I'm ready to face Mr. Big Cat.


I run up to him, dodging his blows with adept rolls and a little clumsiness and roll right past him. 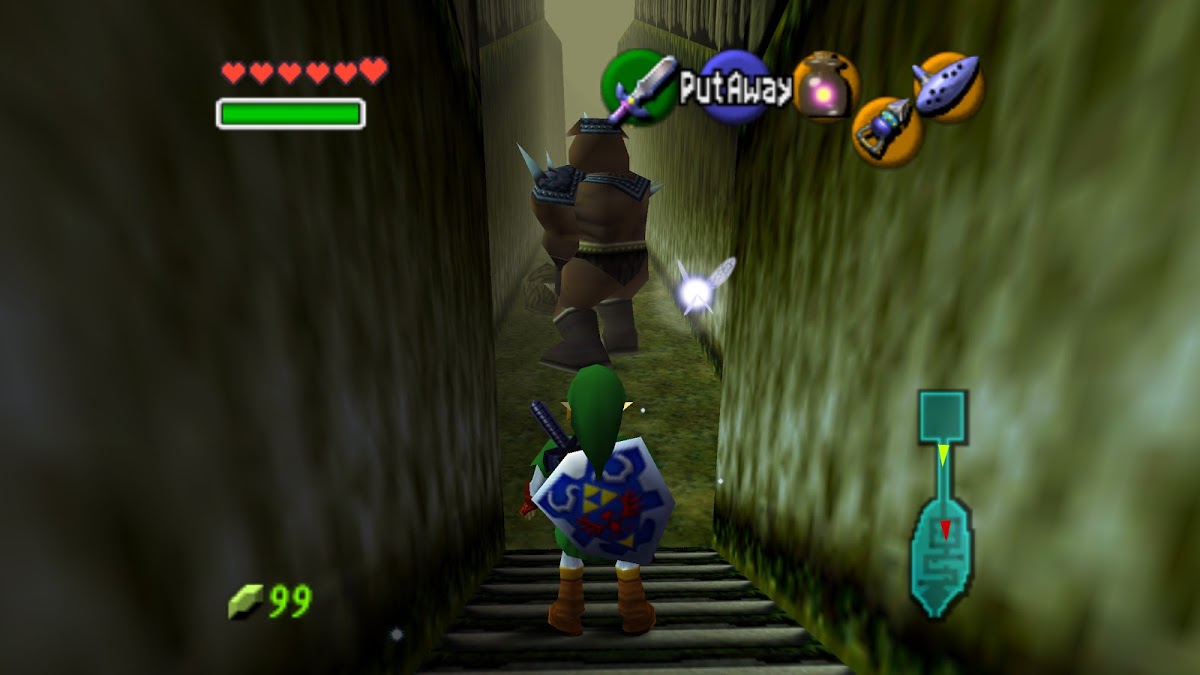 Well, that wasn't so hard. 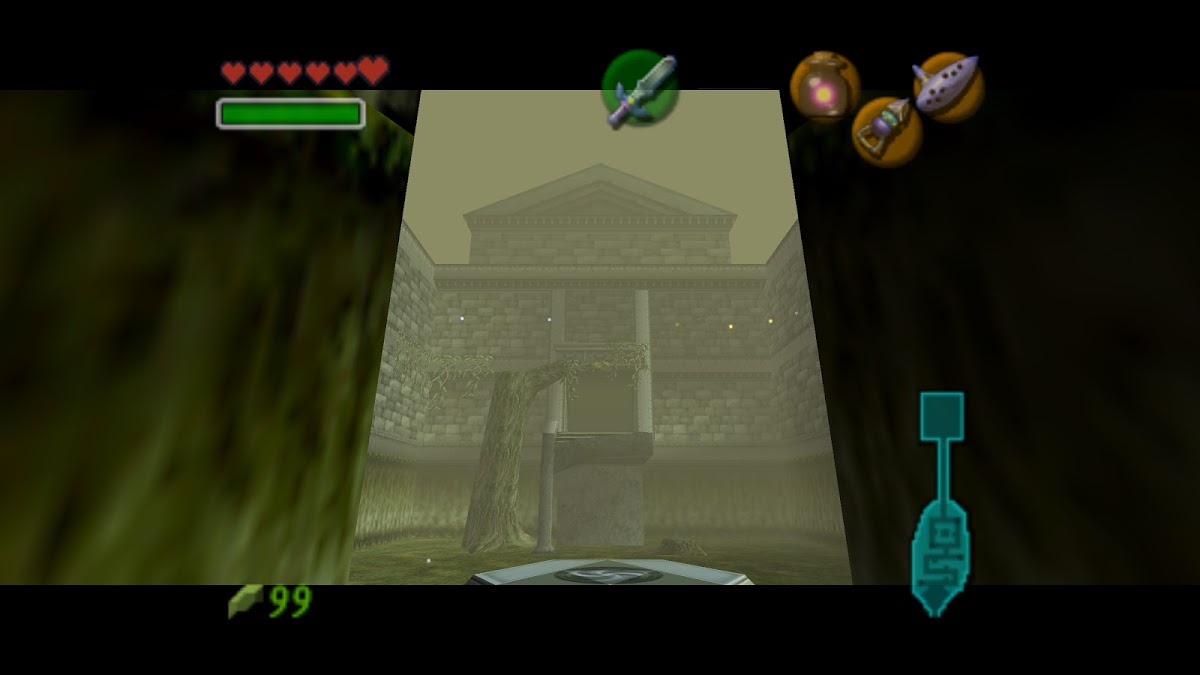 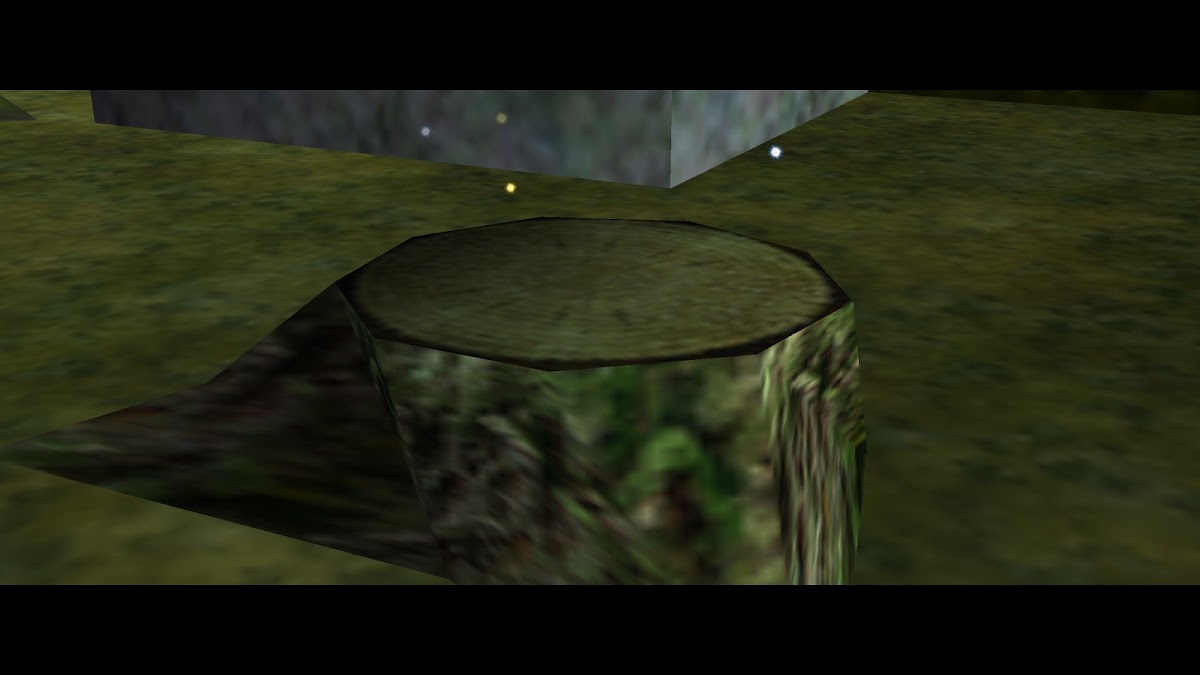 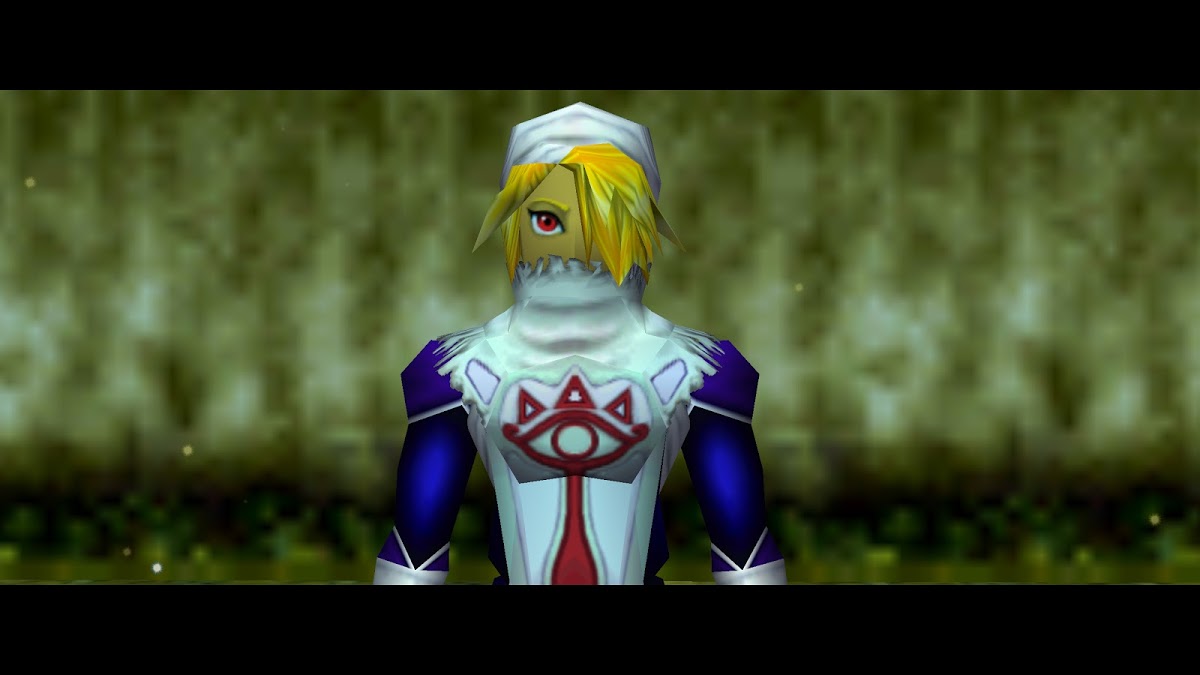 Sheik appears out of nowhere as if she knew I had arrived (and also knew a better path here than through the damn woods which she could've told me), and starts of all philosophical about memories... 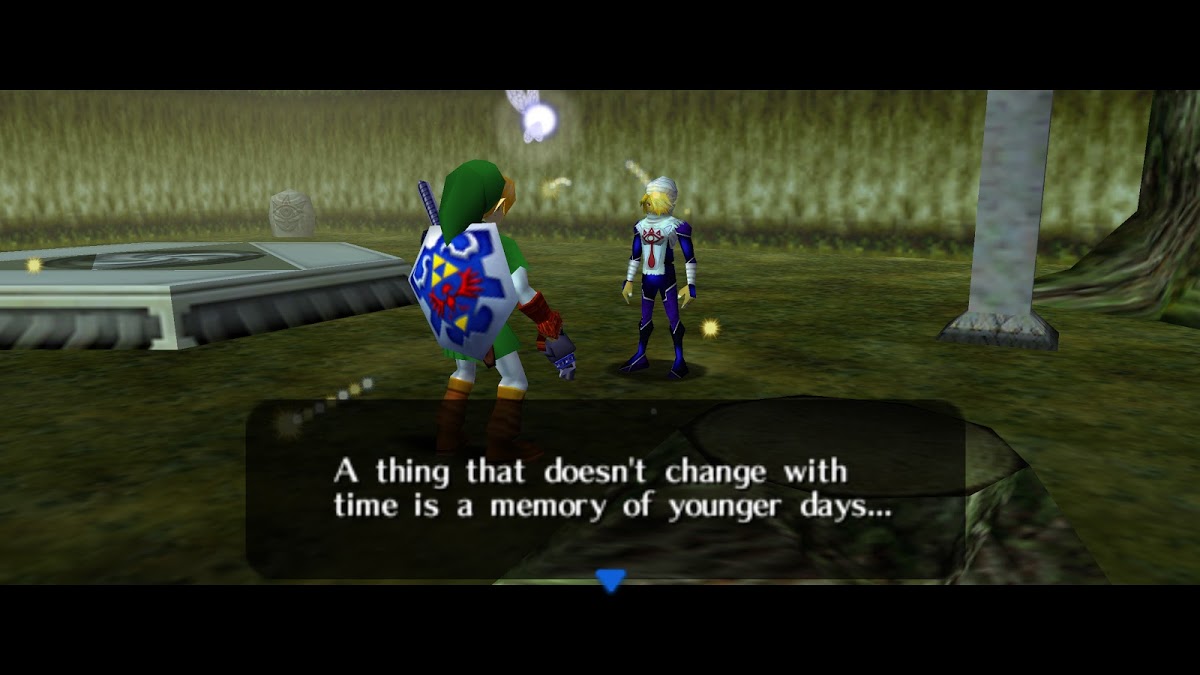 Which I'm like... nooo? That's not true... She hasn't heard of nostalgia I guess? Or memory loss? Or Alzheimer's...

But then she pulls out a harp and begins teaching me a song called the "Minuet of the Forest", which we play as a Duet because why the hell not! 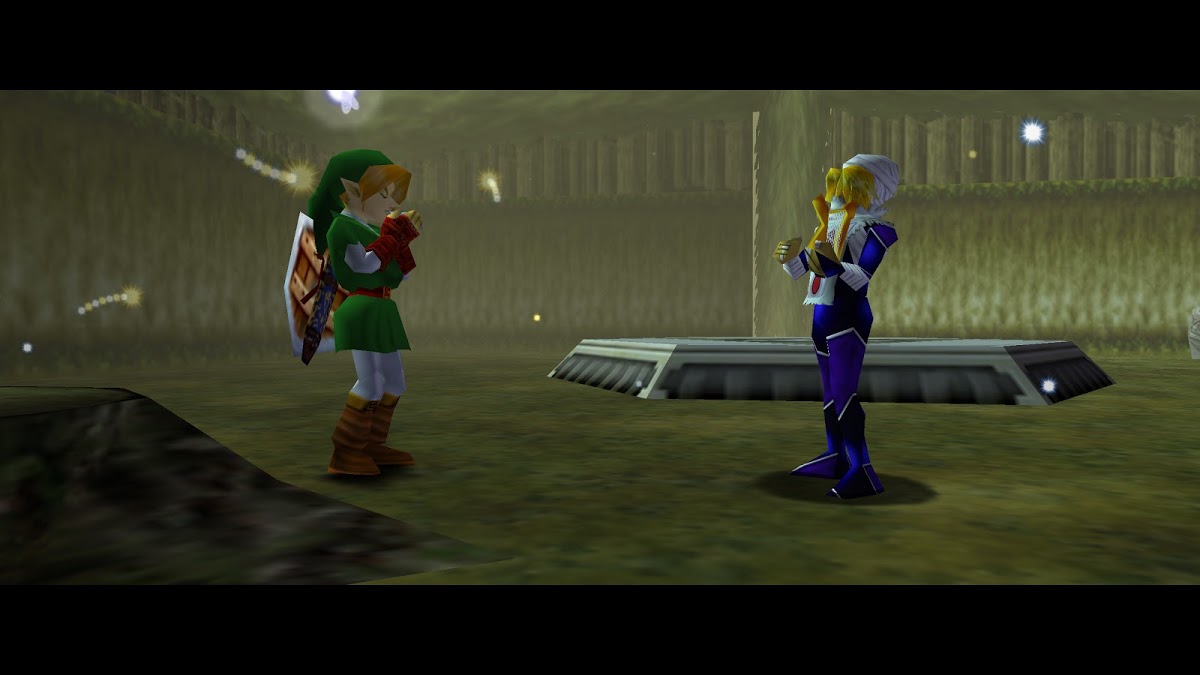 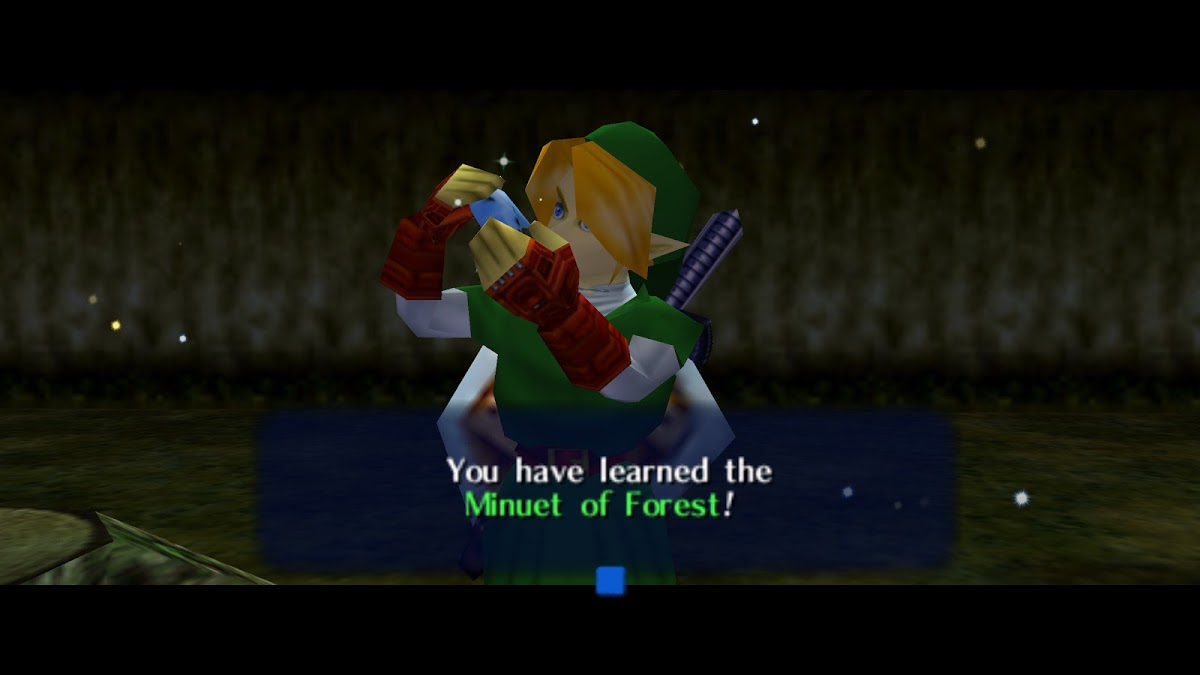 Link is always astonished at the Ocarina every time he learns a new song. Like he didn't know it was an Ocarina this whole time.

So Sheik smoke bombs away (!) and I'm like, ok, I guess I gotta play the song? I do and 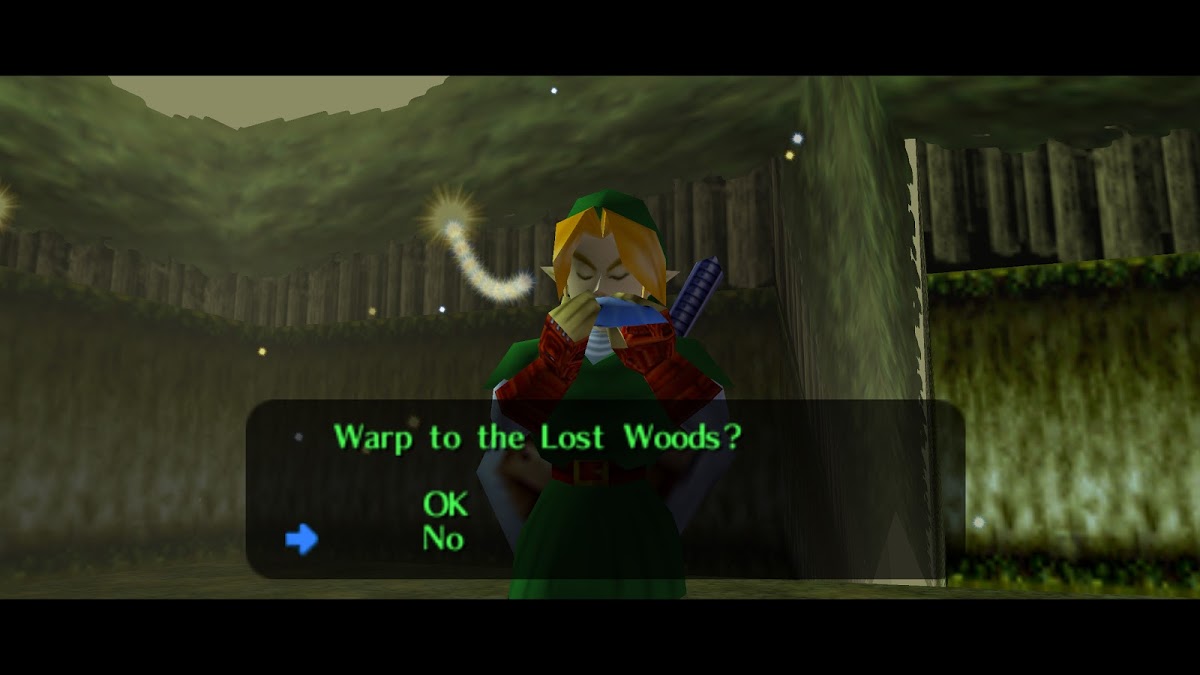 
I guess not.
Alright, so Saria's Song, then?


So I pull out the Ocarina again, but don't quite remember how Saria's goes, but it wasn't that long since I played it, so I'm just fooling around with the notes, trying to remember what it is, and accidentally play... the Sun's Song.


Which isn't a big deal right? So it turns to night? Whatever. 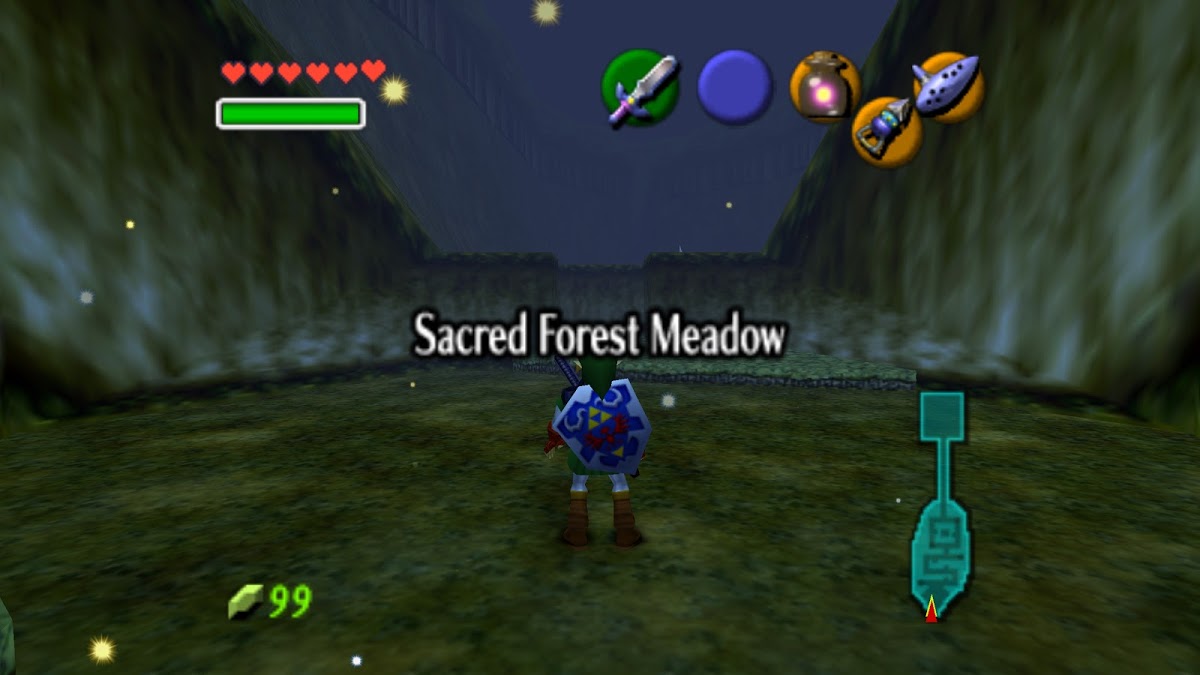 Throws me back in the beginning of the area.
Which is before the fucking maze.
You've got to be shitting me.


Right. I just snuck through the maze again but stopped when I got to the temple again and didn't even bother trying to figure out how to get in there... That'll be for next time. I'm done.


This is the first section of this game I'll call outright bad. There is nothing fun about waiting for cats to slowly meander to a position where you can feather the stick to get Link to the next bush to wait to do it all again.
And sure, I did it a whole bunch more than I needed to because I made mistakes, but it's still bad.