Last time, we killed a Ghost Ganon and learned to become a child again, and now we need to figure out what's up with that "strange cloud over Death Mountain". So let's go up there and check. 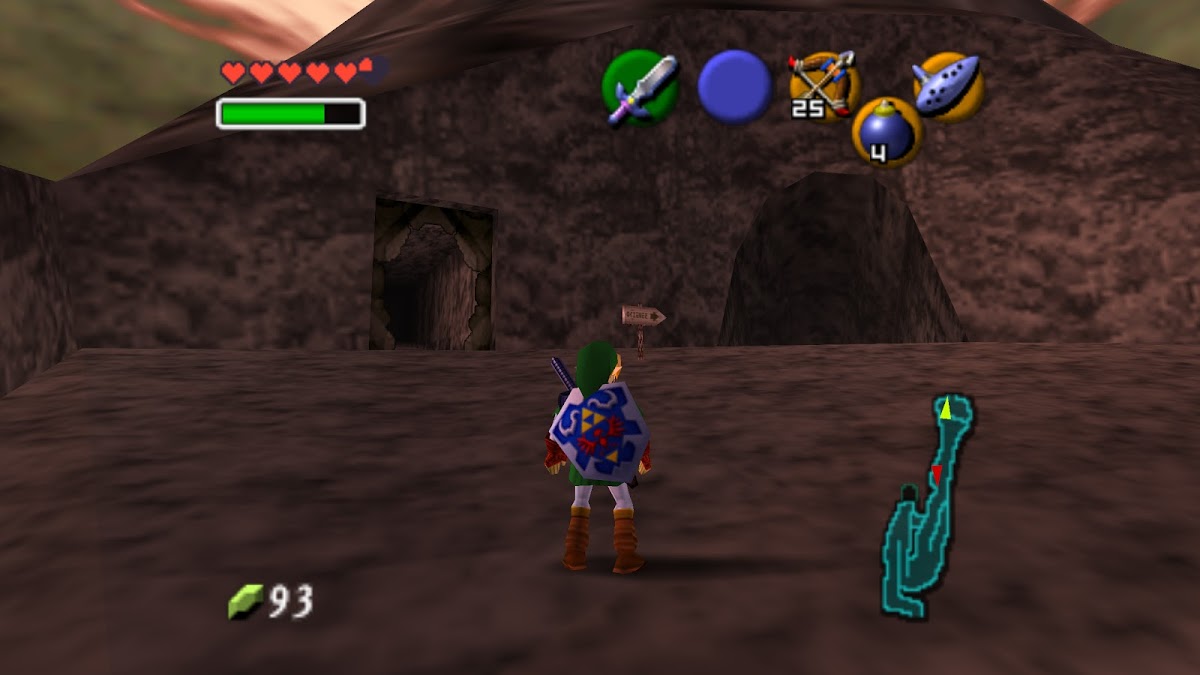 Still looks the same to me. Let's go see how Great Fairy Queen Mother is doing. 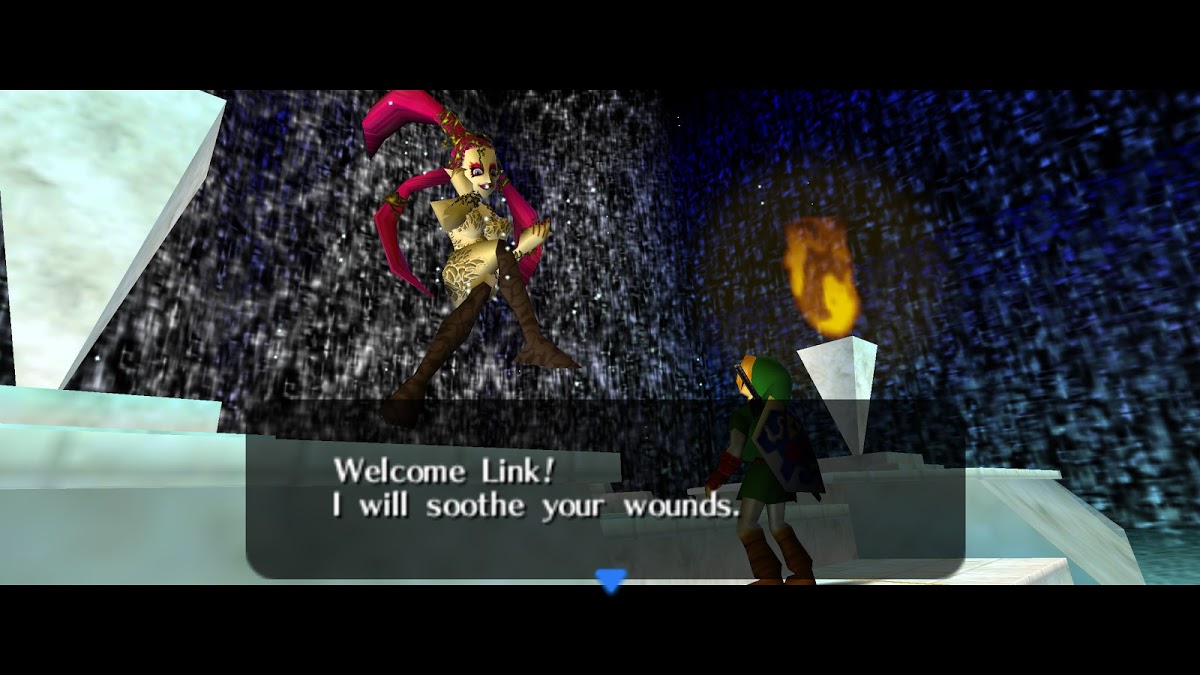 All she wanted to do was heal my 3 quarters of missing health. Soo I guess that helped.

Down the other path... well, there's still the same thing as before. A big red crater and a timer, but also, if I went a little inside it, what very much looks like a temple entrance. 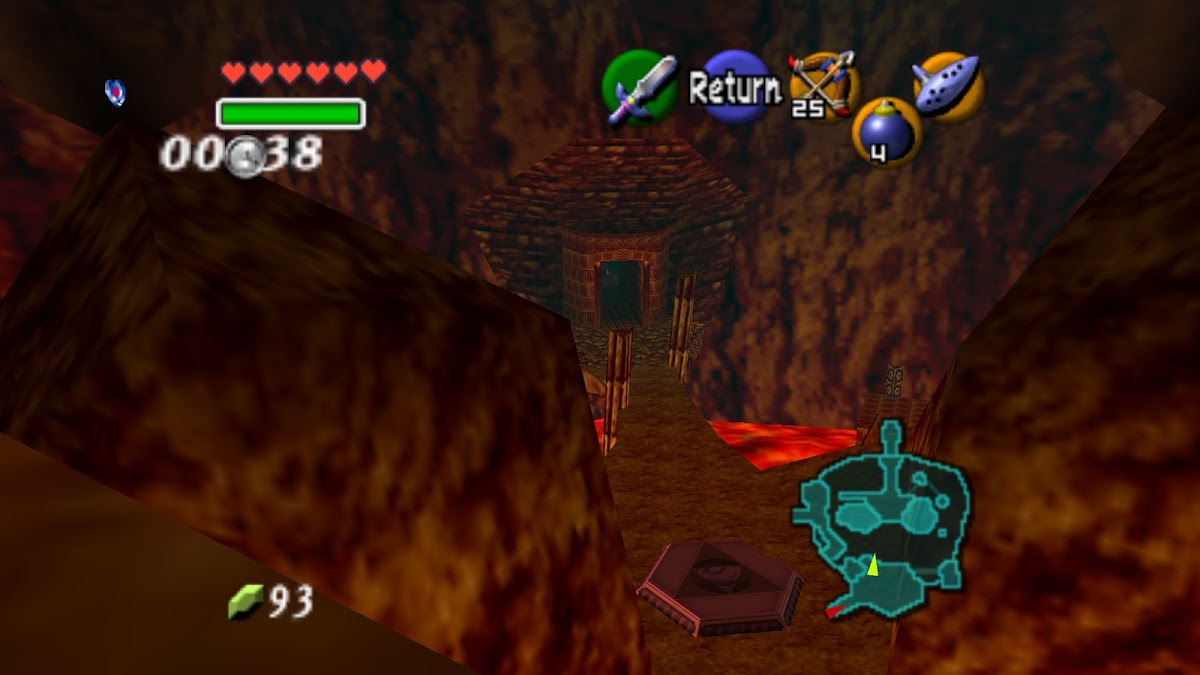 Awright, got our next goal. Now, I can't exactly get there in 40 seconds, can I? 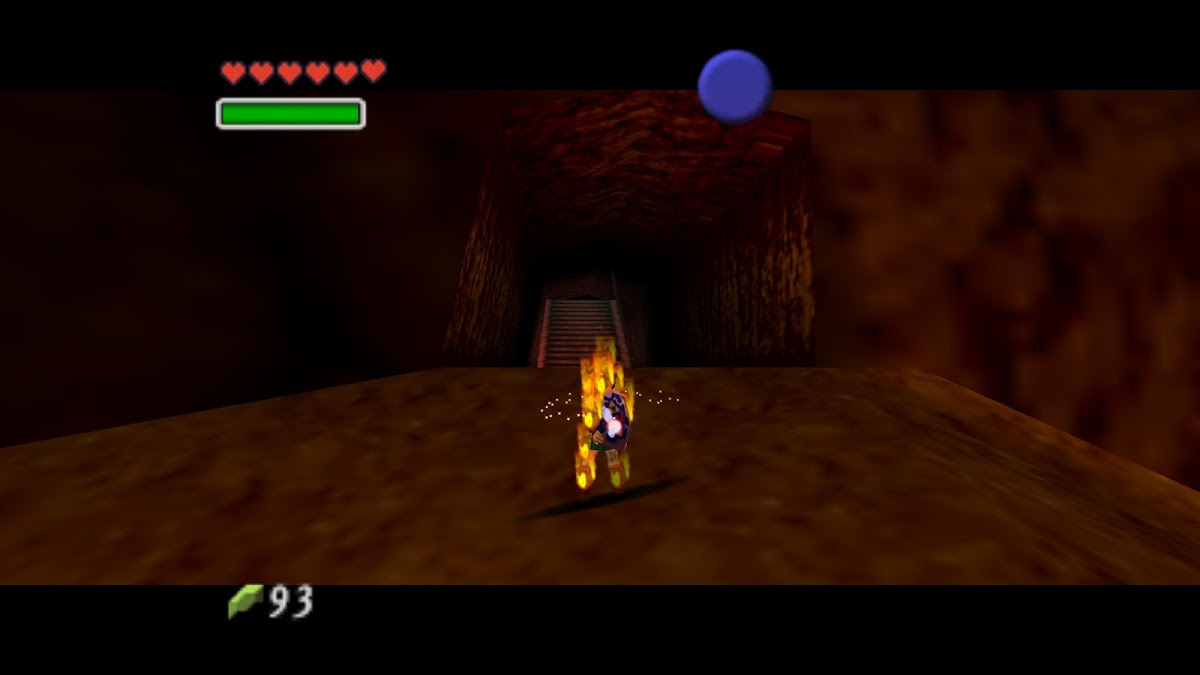 No, I couldn't.
Actually, I discovered there was no runnable path there. I need to find some other way to get there, even if I deal with the timer. Sooo, that was a dead end.

When I head back out, a big ominous cloud all of a sudden hangs over me. And I'm like, oh what's happening? Is that the thing Na'vi was talking about? 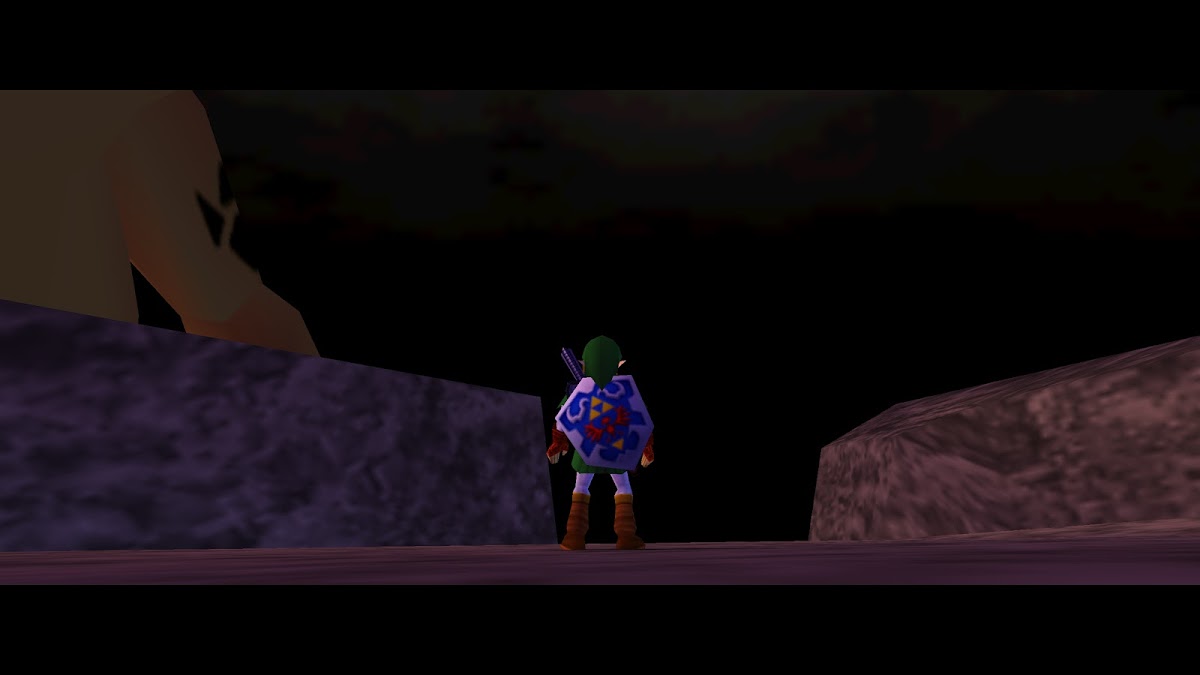 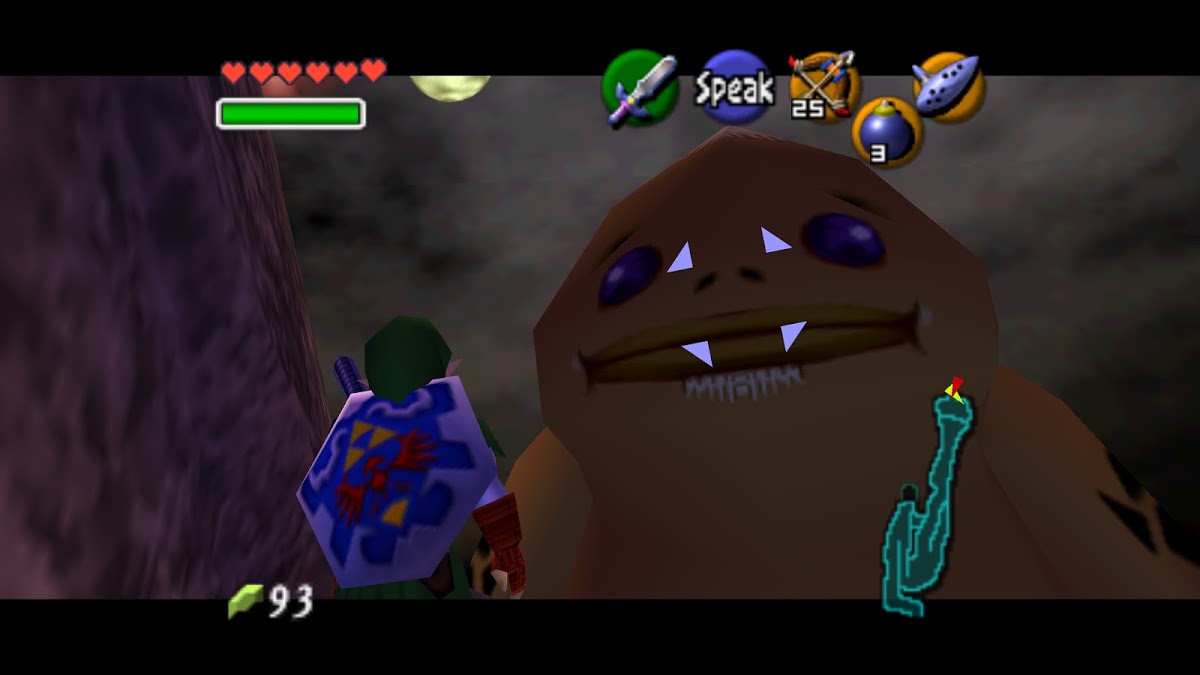 Oh. Uhh, hello. Did you eat everyone?

Instead, it's just a big Goron fella, who says he's the brother of the guy who wanted to sell me a knife, BUT he's actually way better than that guy at making blades. 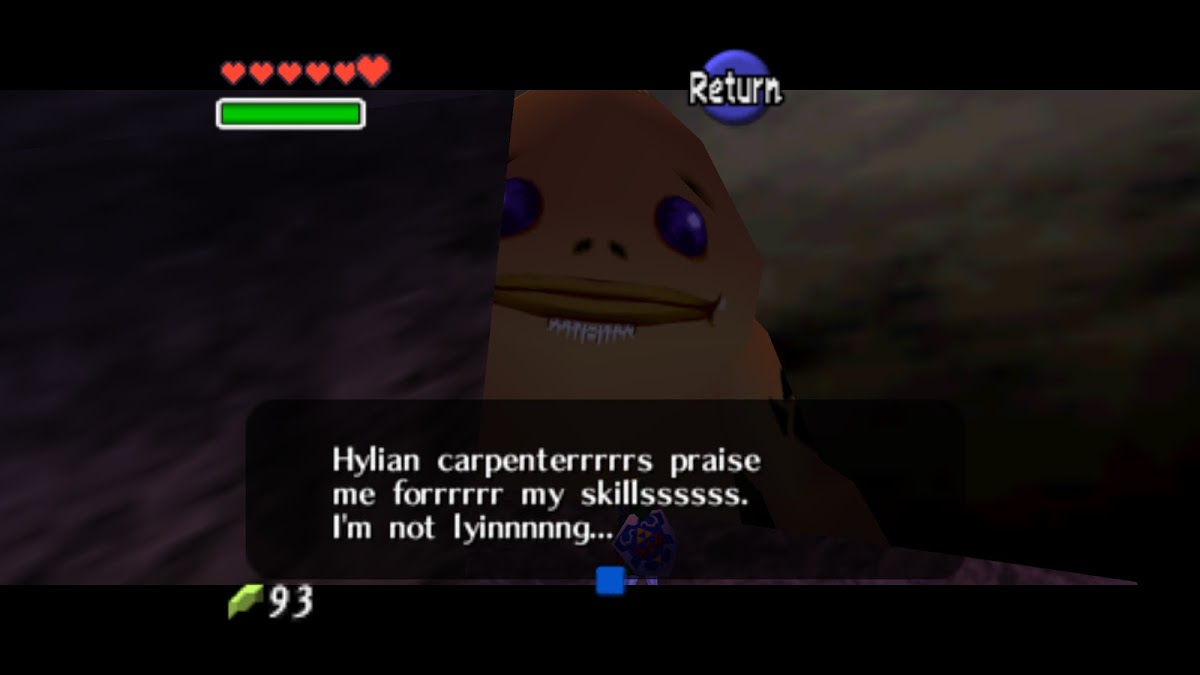 See, he says he's not lying. Then it must be right.
And also, carpenters don't make blades? The fact that carpenters praise your skills... don't really mean much, dude.

And that's all he had to say. Just came to be grumpy about his brother's success. Great.

So now I'm actually stuck. I know this is roughly where I need to go but I go no idea how to go there.
I ran around a bit more, and warped back to the Temple of Time to see if Sheik had another hint but she was just gone, so I dunno...

And I coould spend the rest of the episode and maybe the next just goofing around until I find something, but really, that's just going to prolong stuff and not be that fun, so I'm going to look it up okay?
I know, it's not as fun, but eh, I want this to progress. Aimlessly wandering is not fun.

Remember that rolling guy that just rolls around the place? And that he's not the same as before, but last time, it was very optional? Yeah. This time, it apparently ain't?

I gotta, in the parlance of the guide "Time a Bomb" to his rolling. 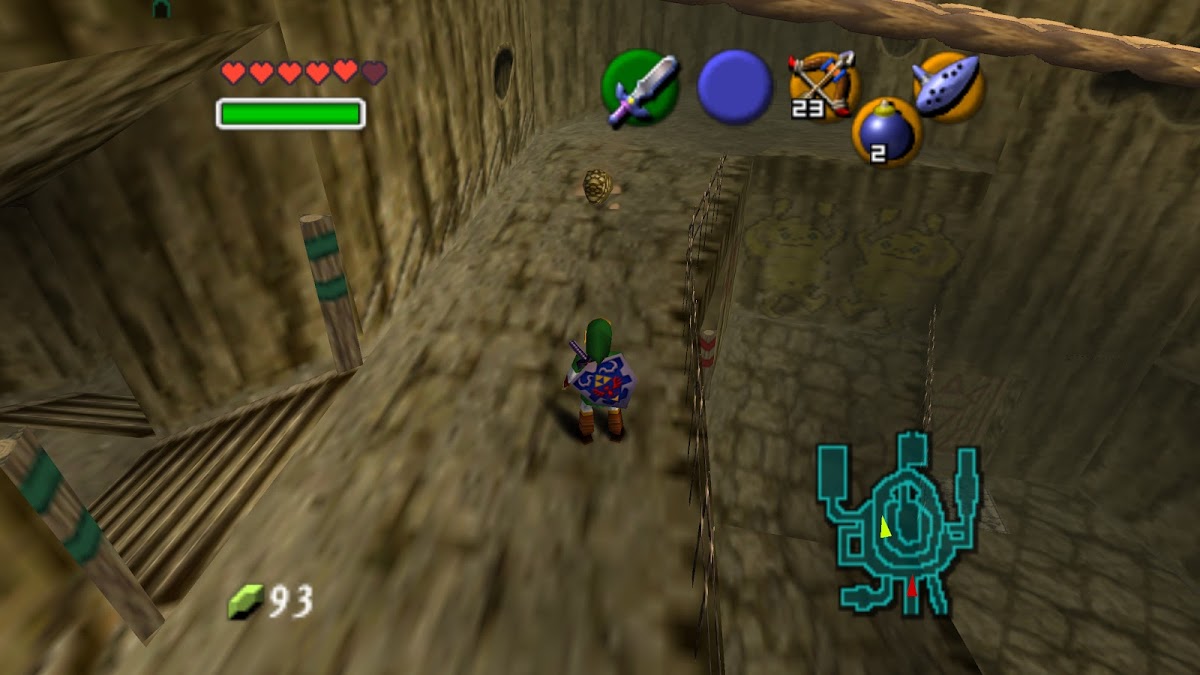 Fuck.
The bombs have like a 4 second timer and he rolls pretty fast.
And I got 2 bombs.

Luckily, I remember there are bomb flowers in this place, so that's actually not the problem, but I still gotta time the things.

So I try and fail and try and fail and hit it several times where I'm pretty sure it should have worked but it didn't, and then finally, I double up and place two bombs in a row after each other, and the second one of those works. 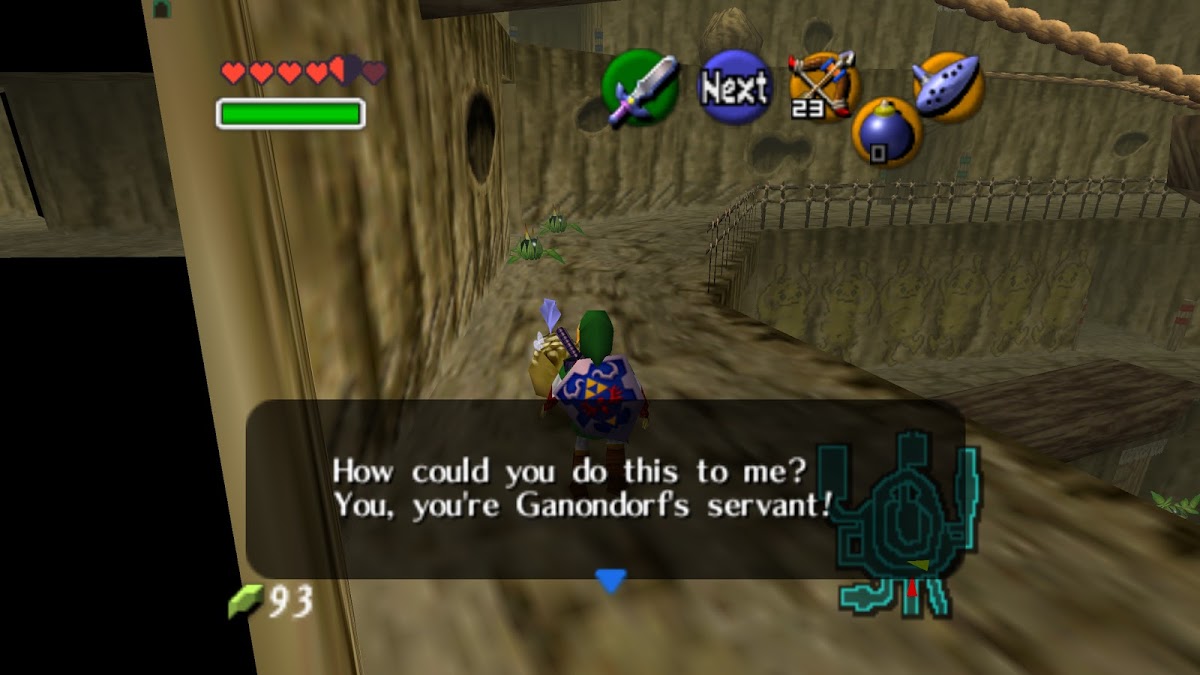 It me, Ganondorf's servant. I mean, I did help him take over the world. 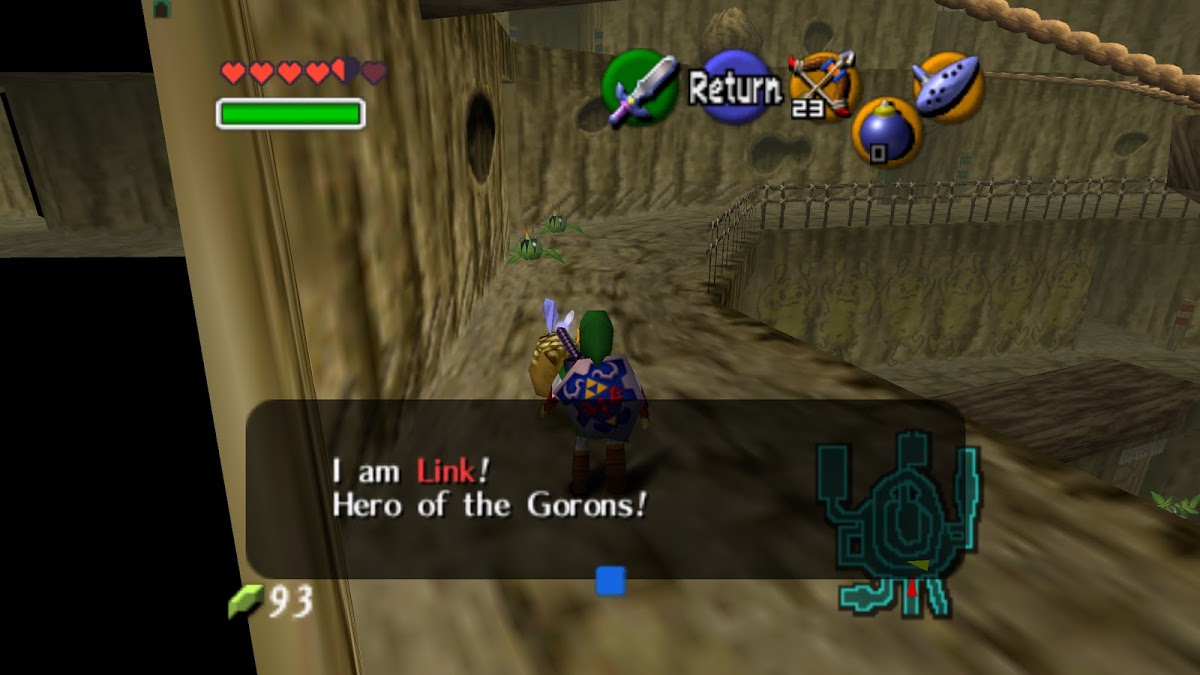 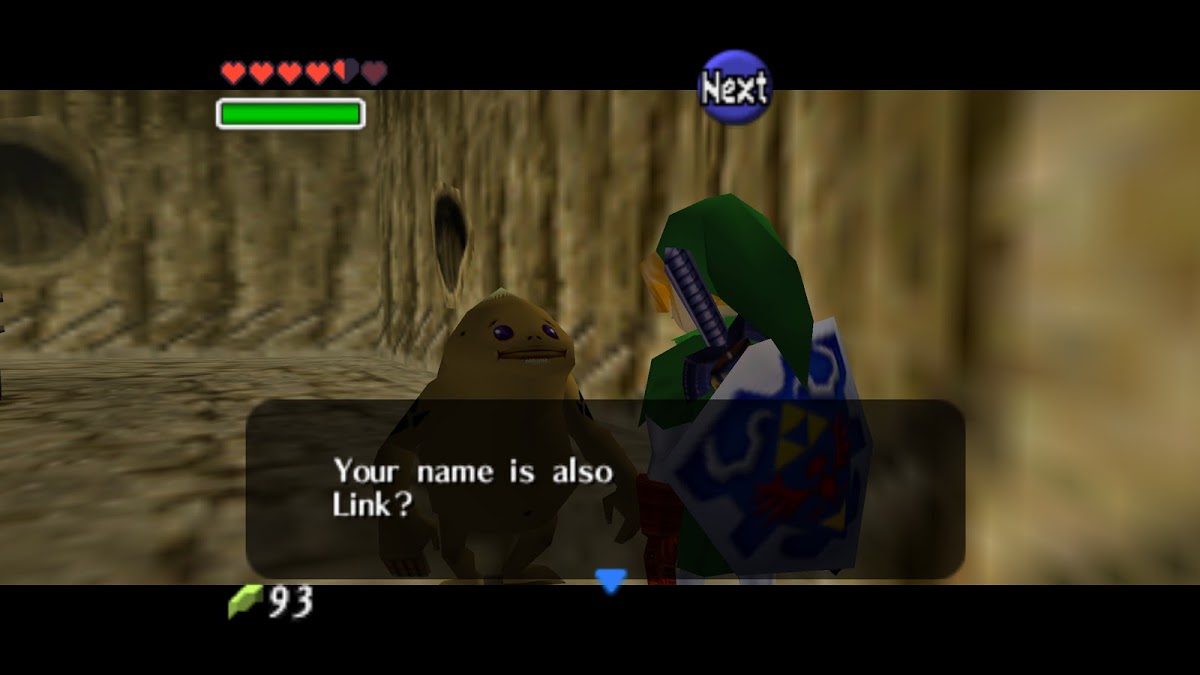 So he goes on to say he's the son of Big Bro, the leader of the Goron's from last time I was here, and that he was named after me because I "so brave" back then. Which is sweet, and also... a bit sad. I feel sorry for you kiddo.

But then the kid suddenly remembers that bad things are happening and I need to help. Because apparently, the evil dragon "Volvagia" in the Fire Temple inside the mountain, and everyone in the city has been kidnapped inside to be eaten by "Volvagia".
Oh, and Ganondorf revived "Volvagia". If you hadn't guessed it. 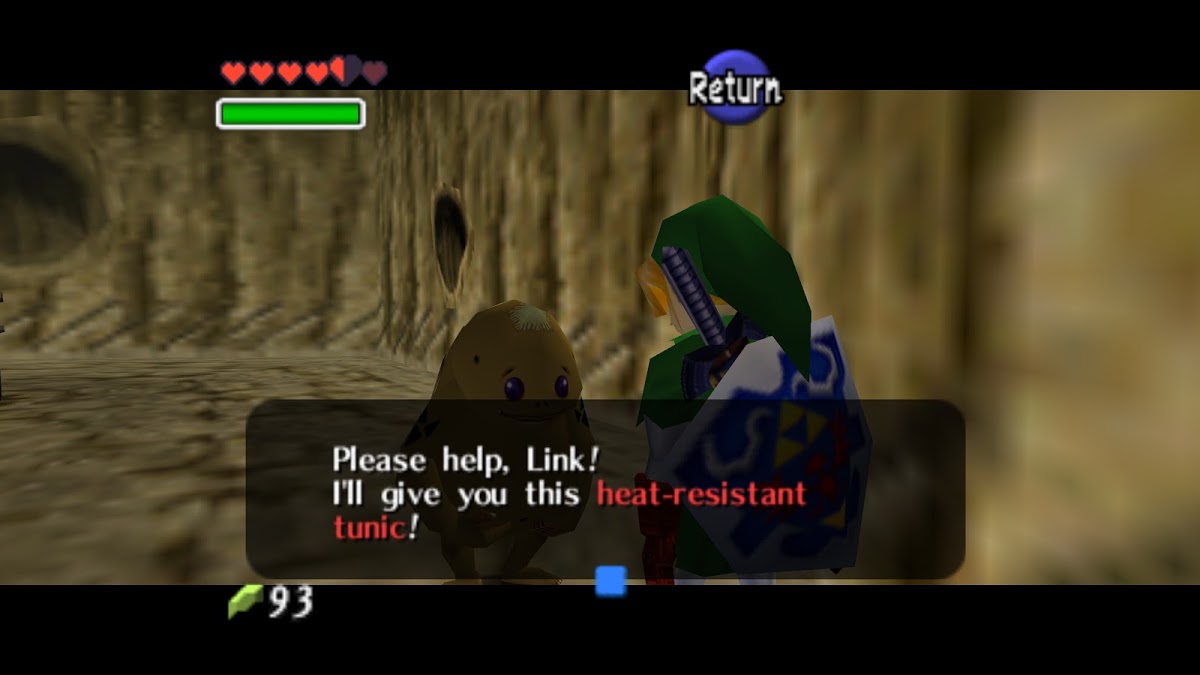 Say no more! I love Heat! I refuse to wear this!

When he's done talking, the two doors in the bottom open up. And I go into the shop to check if... 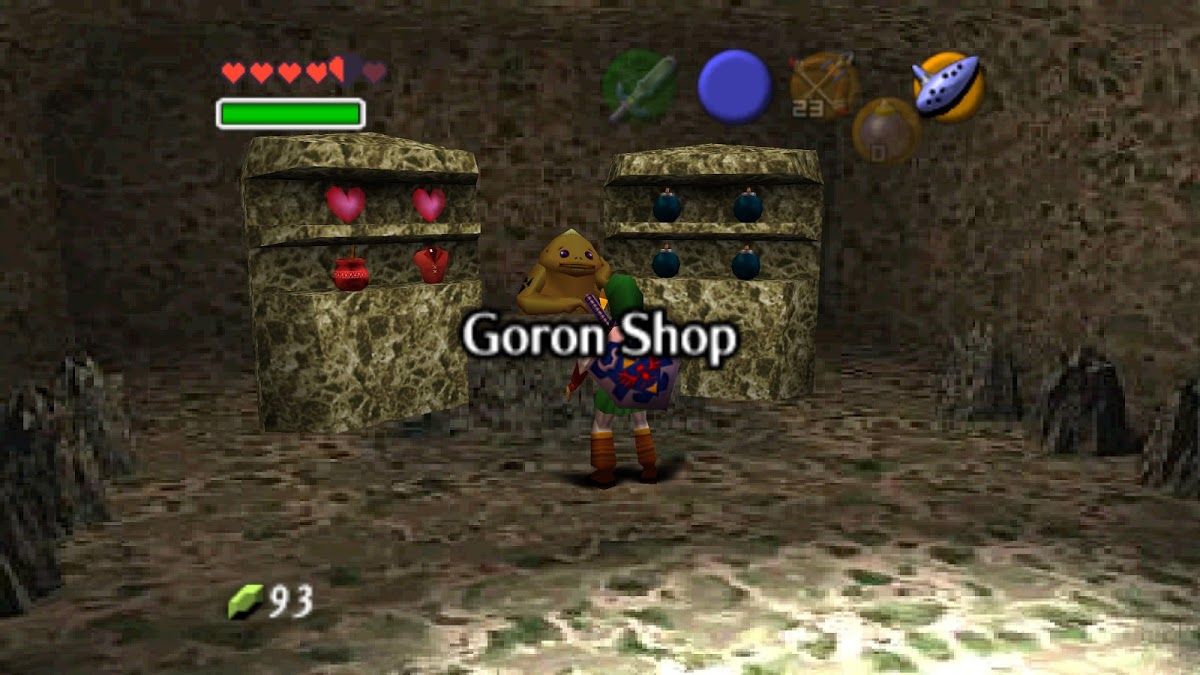 Yep, not kidnapped. Good job, shopkeeper. Guess I should buy some bombs and go check up on that mountain up there. 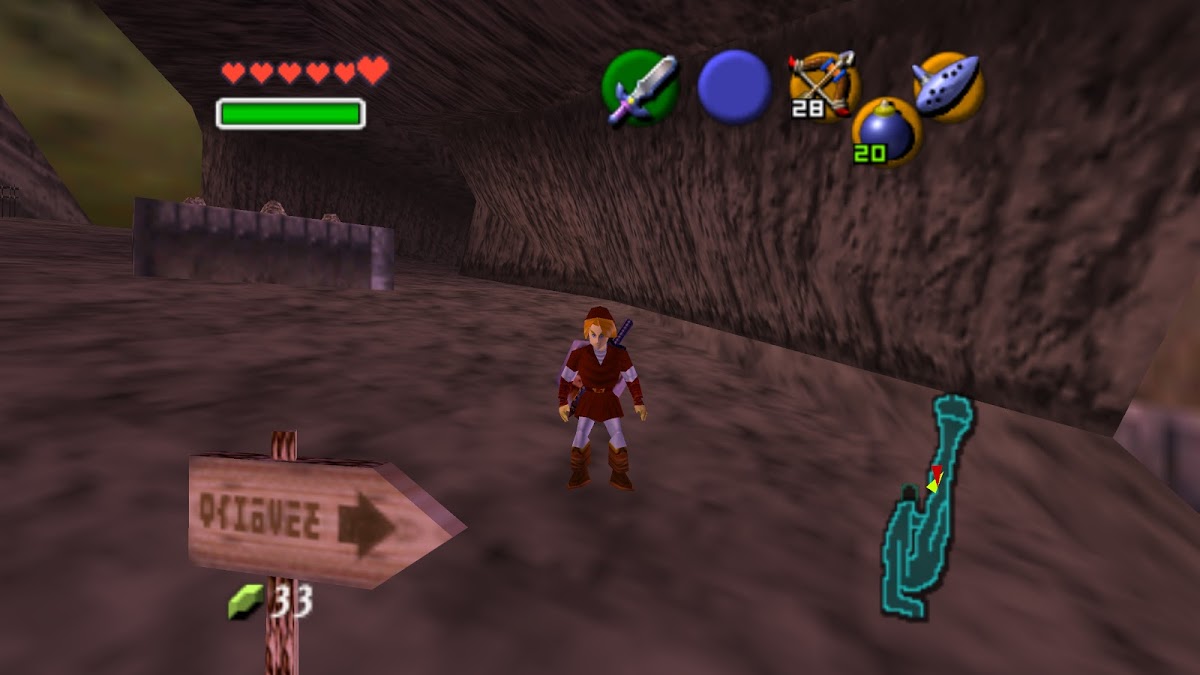 Ooh, it even changes the color of me. I am now Link, The Crimson ShitshowTM.

(ok, I dunno about that joke, but I'm keeping it)

Back up to the crater, the timer is now gone thanks to me being red, but I still have the problem of not being able to fly across the crater. 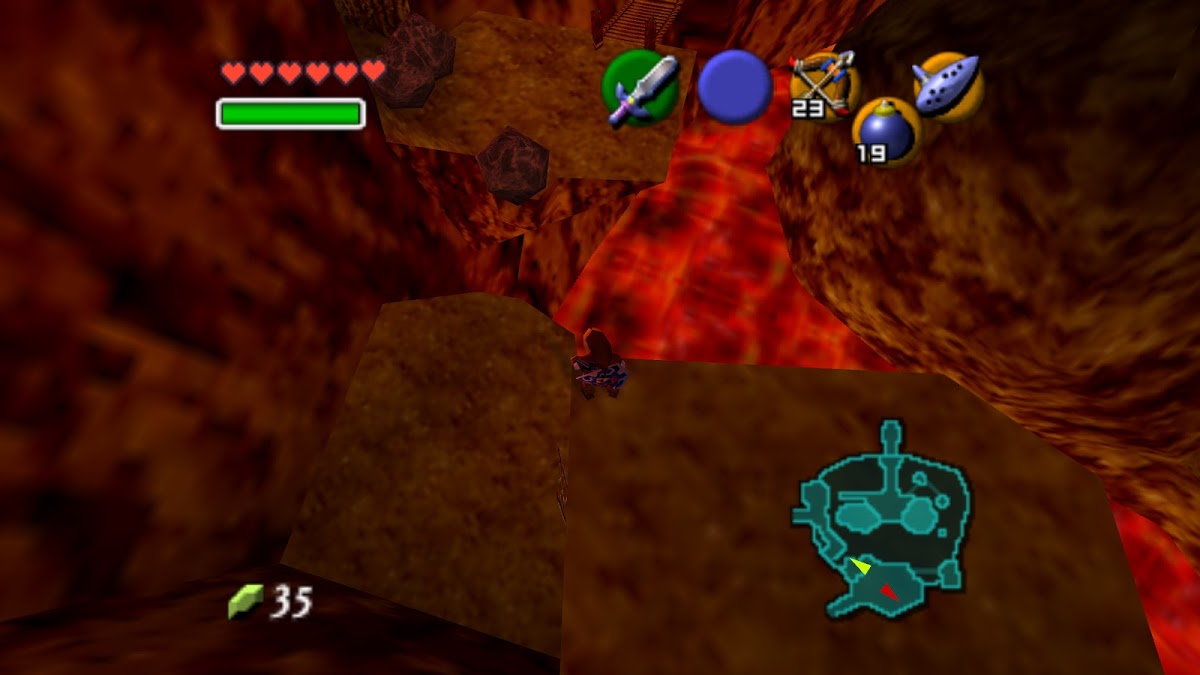 That's a bit far to jump.

So, another "accidental" glance at the guide reveals that I shouldn't have gone up to the mountain at all but rather gone into Big Bro's room in the city.
Which, I know it all opened up and stuff, but it's like, his room? And he's not there, so I feel a little... I dunno...

Ah, i guess Link's used to this by now. So go in there and move the big statue in the background, yep, no problem. And guess where we end up? 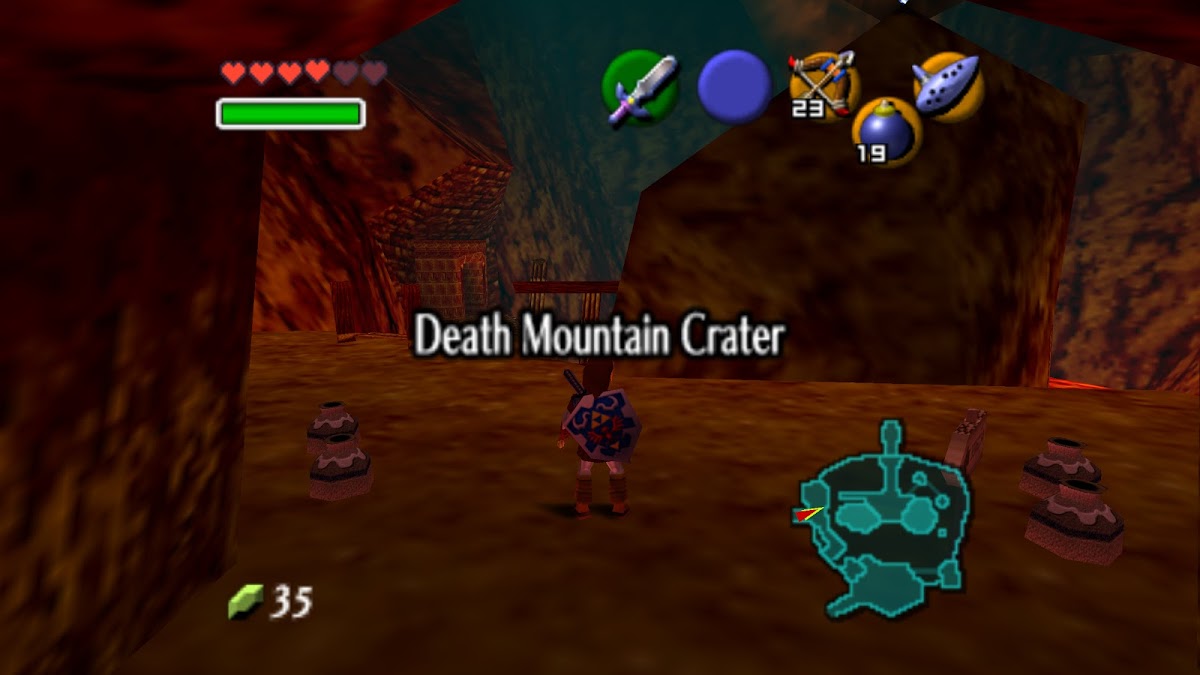 There's a closed entrance to the right, with two rocks I try to blow up but they won't get blown up but Na'vi goes over to them and when I approach I get prompted to see this 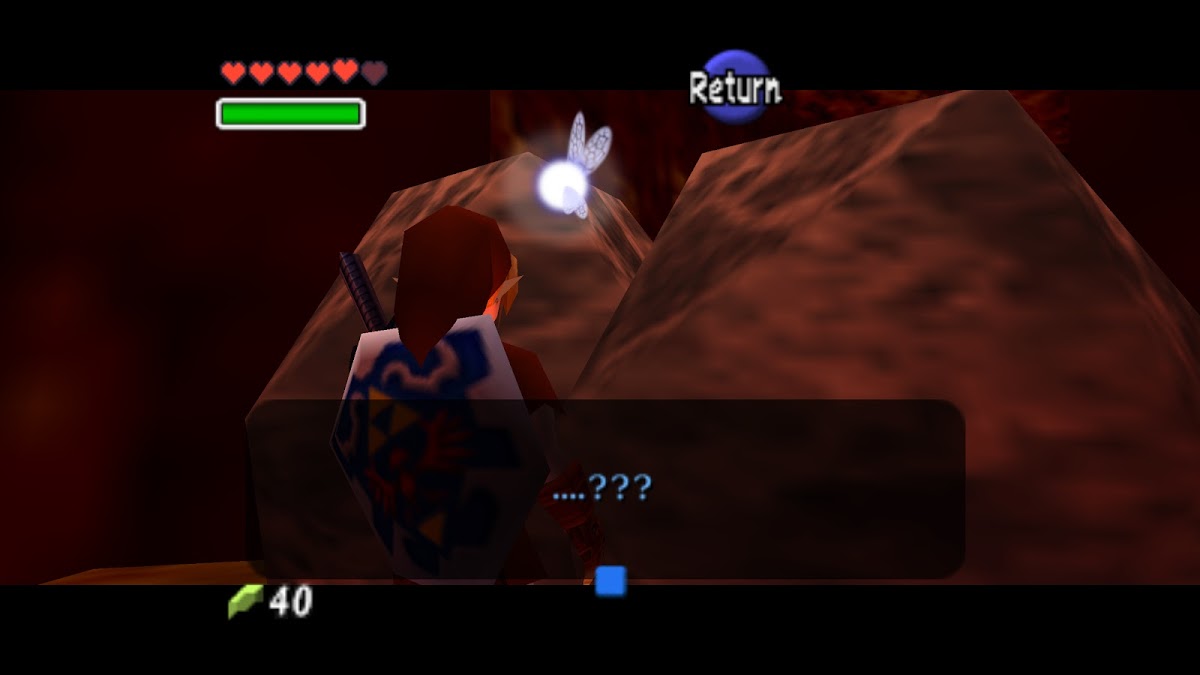 So, whatever. Instead, let's go to the temple and have another occasion to use my hookshot (gasp!) and meet up with Sheik again. 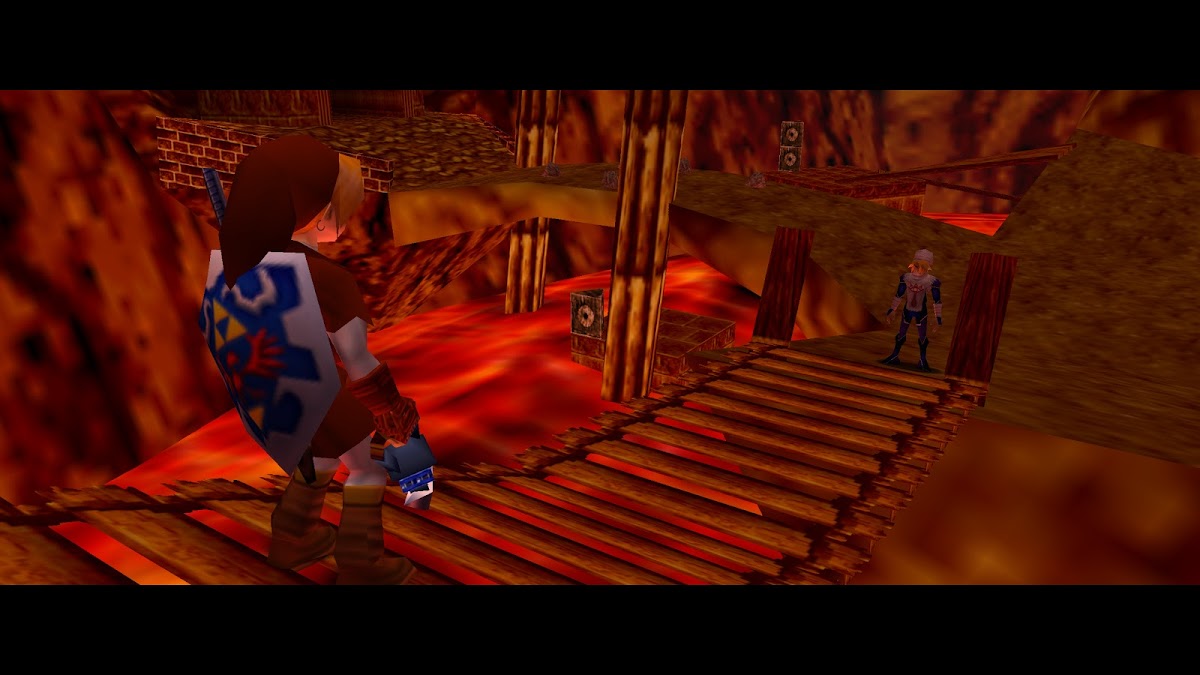 Because she, of course, got here first and is far more competent than I am. 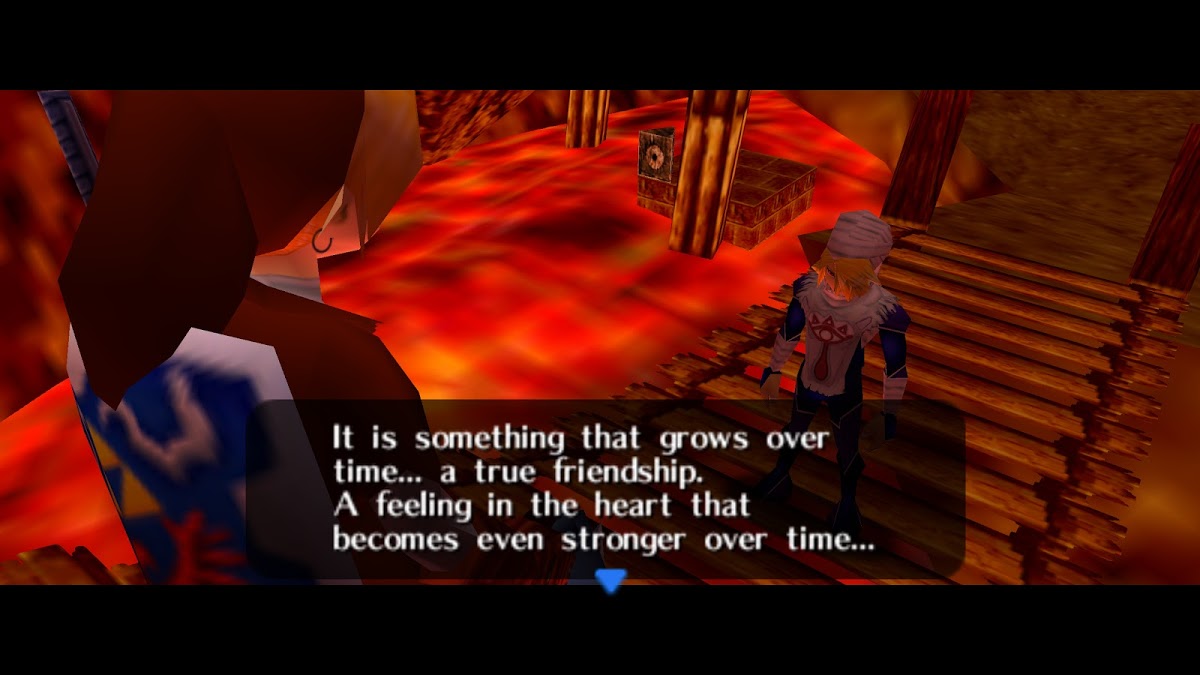 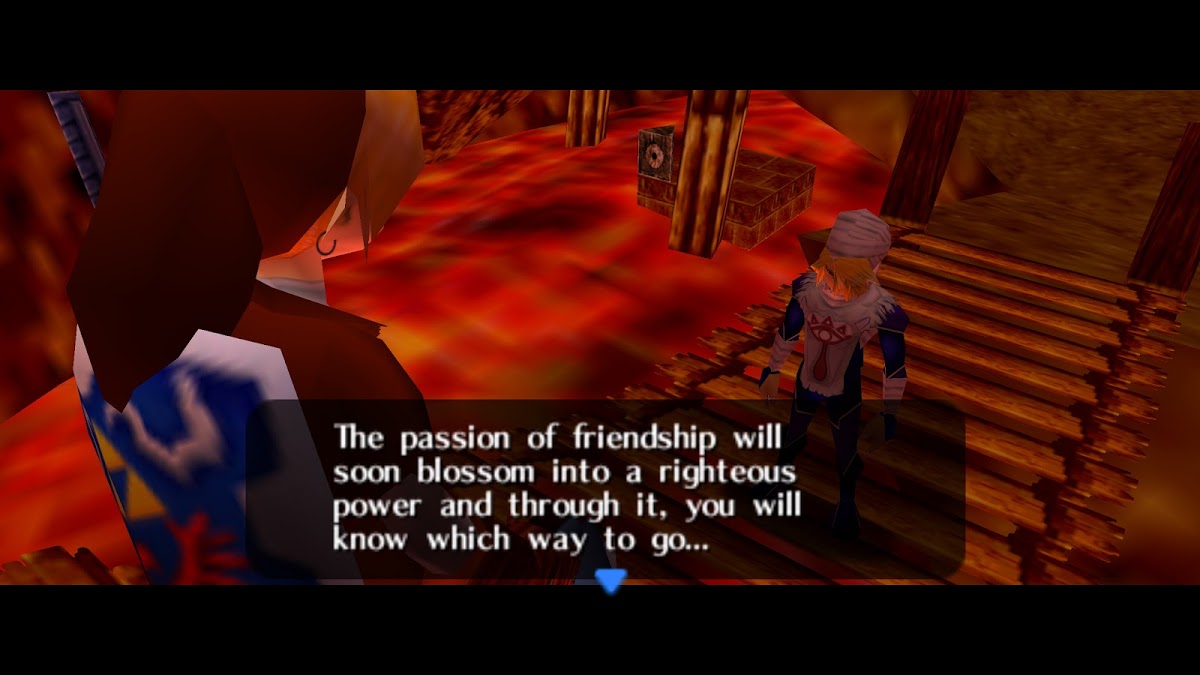 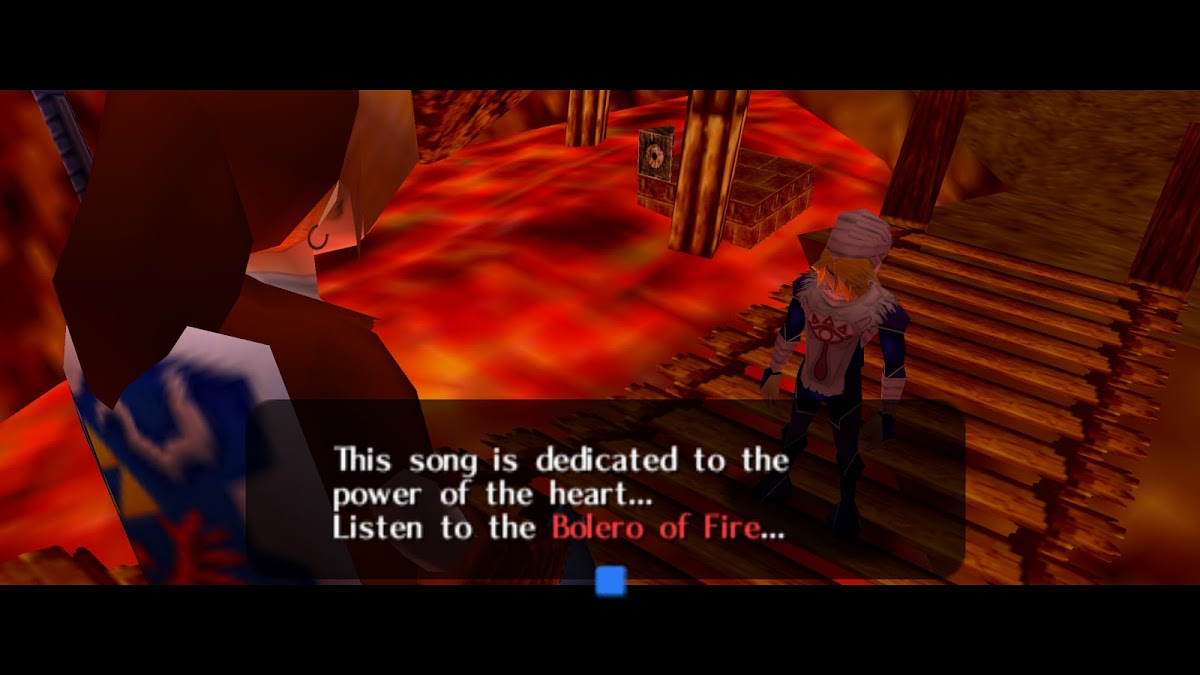 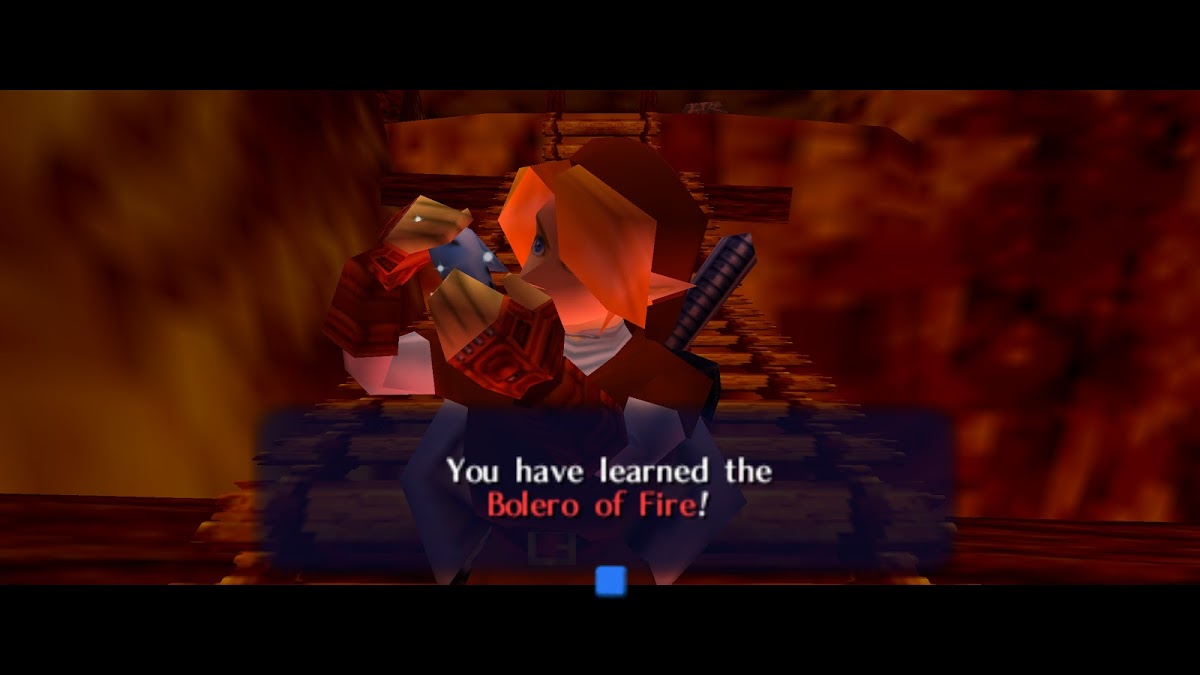 But now it is Time To Temple. 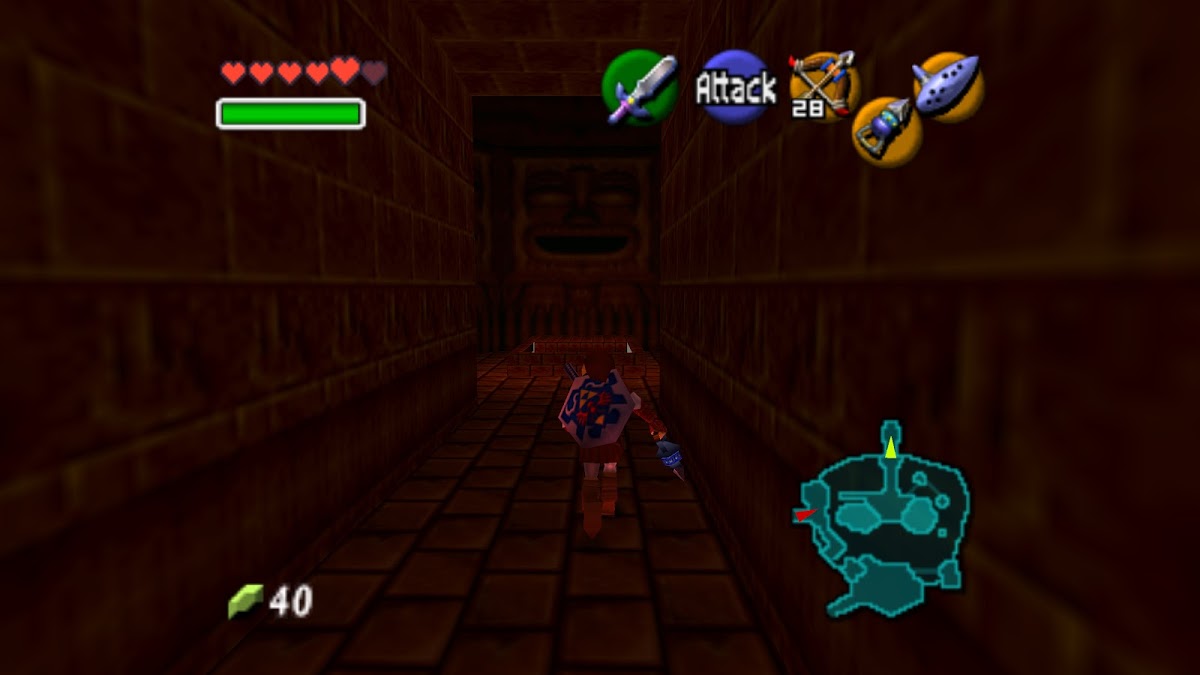 Down a long ladder, and we get to the Fire Temple.
There are two doors. One to the right that's locked, and one to the left that's open. I swear, these puzzles are getting harder. 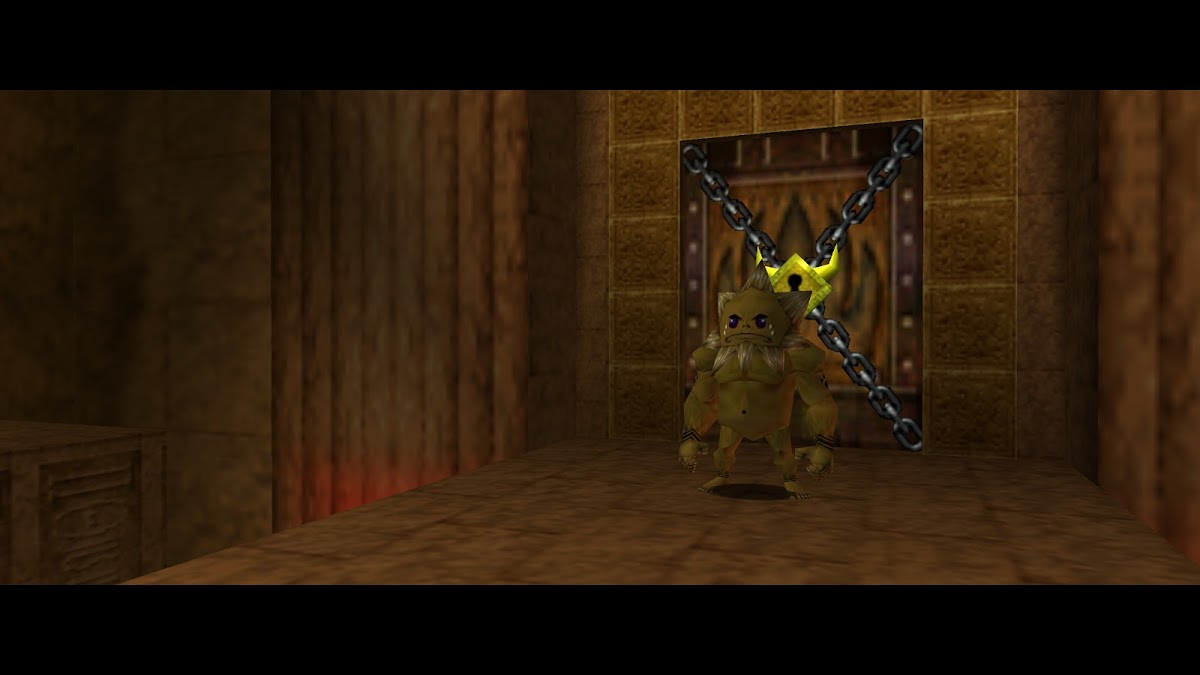 Oh, you're just right here are you? 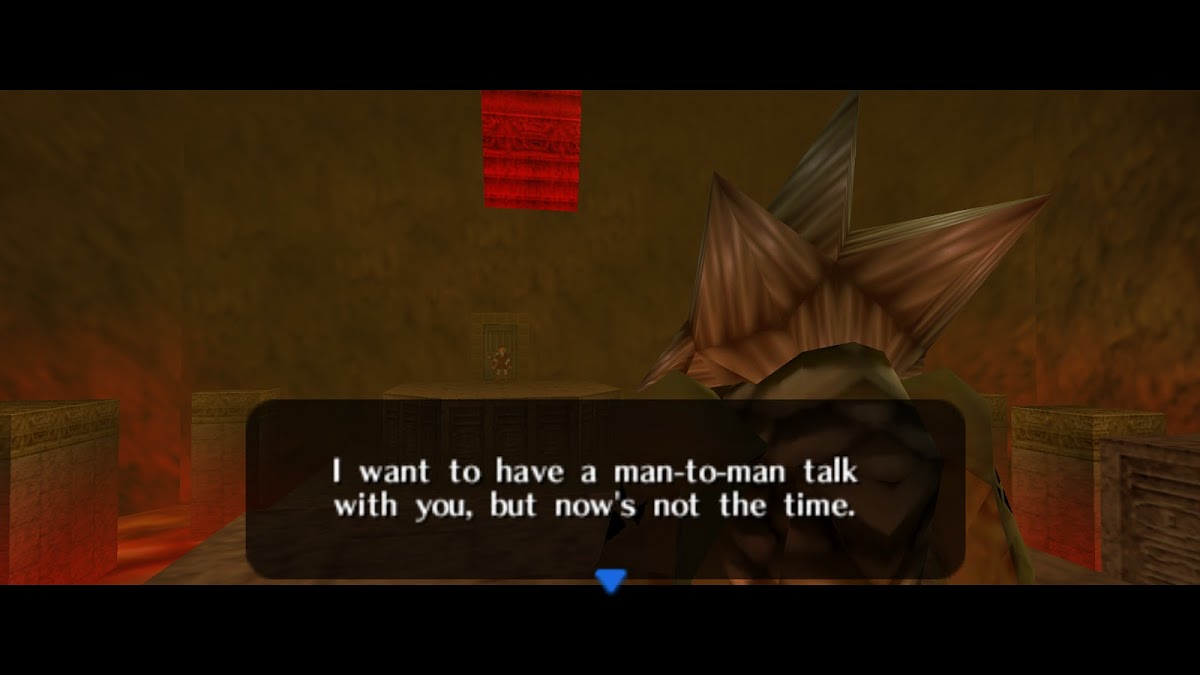 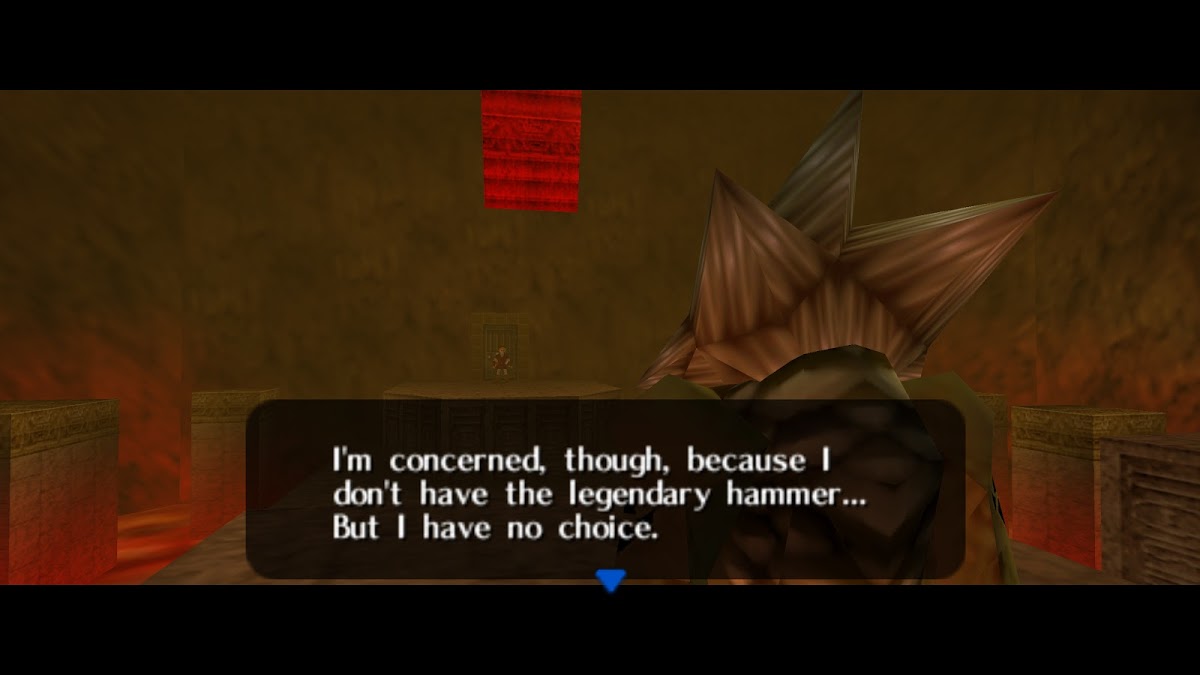 Oh, you want a hammer? Sorry, can't help you. I'm not good with hammers.

So, he dumps the exact same lore I just got from his son about the dragon, and he tells me that he will go and fight the dragon while I should go rescue the prisoners.

Which is definitely what will happen.

So I rescue a prisoner who was right next to him but he didn't rescue. For some reason.

And the first thing that prisoner tells me? 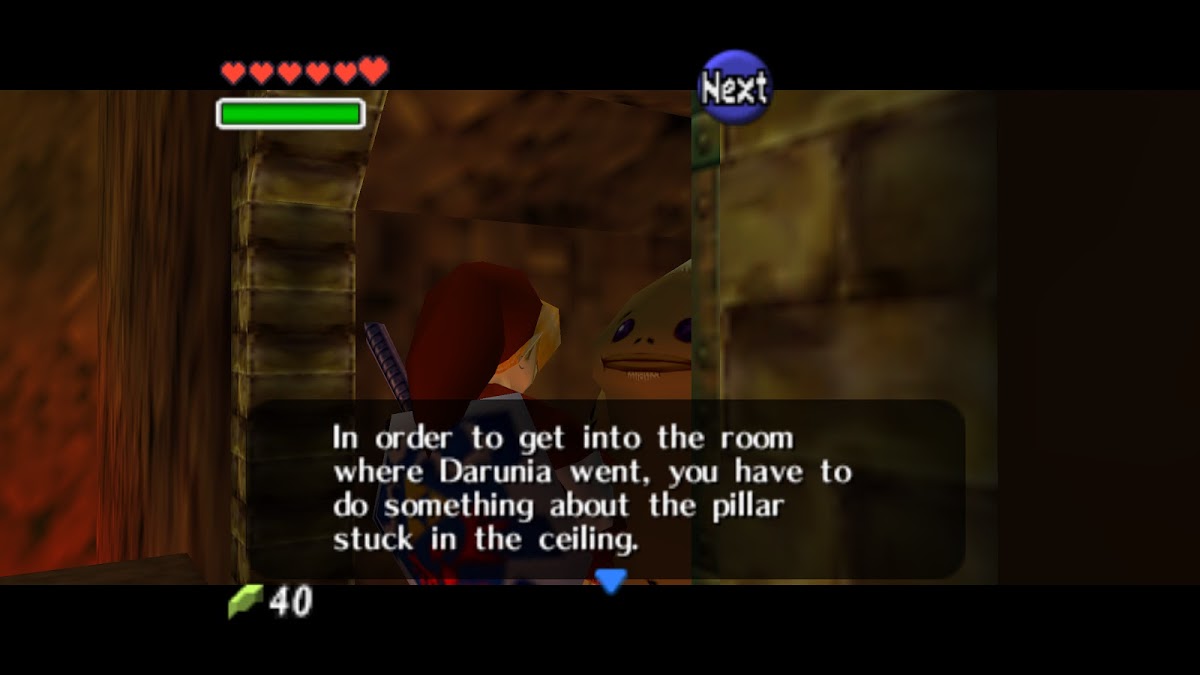 Is how to get into the room where Big Bro just went.
I guess they're not even being coy about it. I'm sorry Big Bro, but I'm going to kill that dragon, and you are going to die, and be resurrected as a Sage.

Spoilers, I guess. But I technically don't know so it's "speculation". (I genuinely don't know, this isn't because I read it in the guide. Promise.) 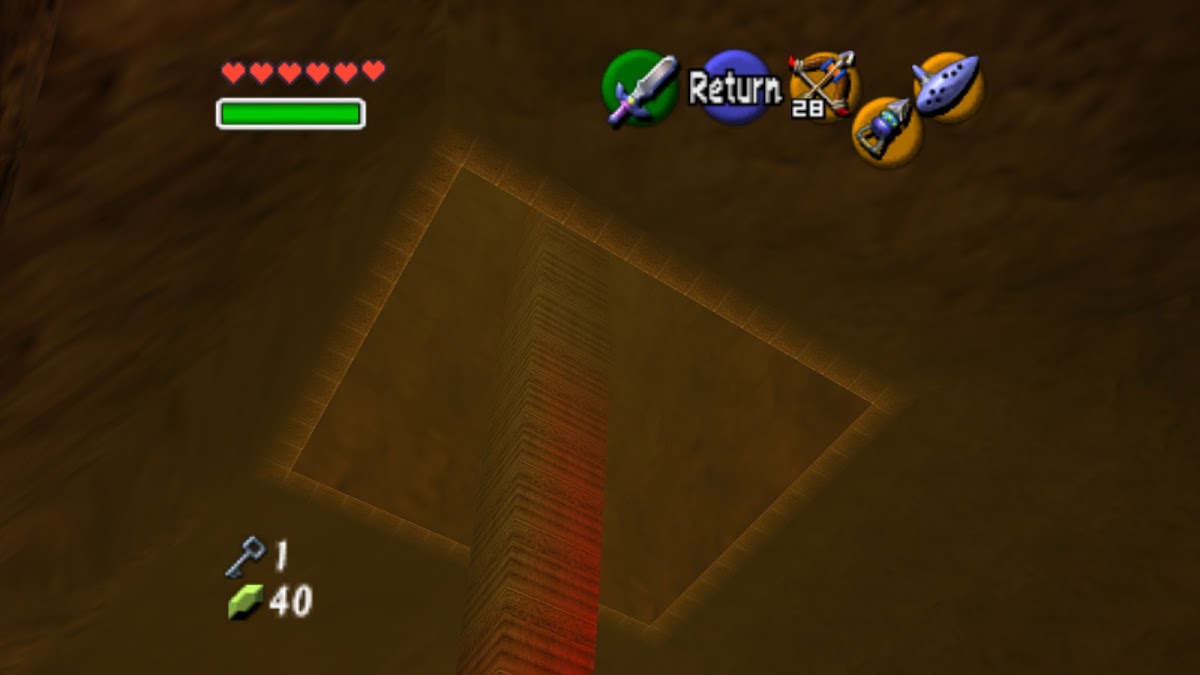 That's the pillar by the way.

So now that we're in here and got a mission to rescue prisoners, I think that's a good spot to give it a little rest until next time where we'll definitely see that pillar fall down! Because I'm timely and I make everything happen in one episode!