(Sorry for no episode last week, but I was busy the whole weekend so I couldn't squeeze it in.) However, last time, we got through the Fire Temple and slayed the dragon above all dragons, and wandered back to the village all triumphant to find no one give a damn about what we did. Soo, I wandered over to the Zoras instead because they gotta have something to say. Except, you know, we found it all looking like this: 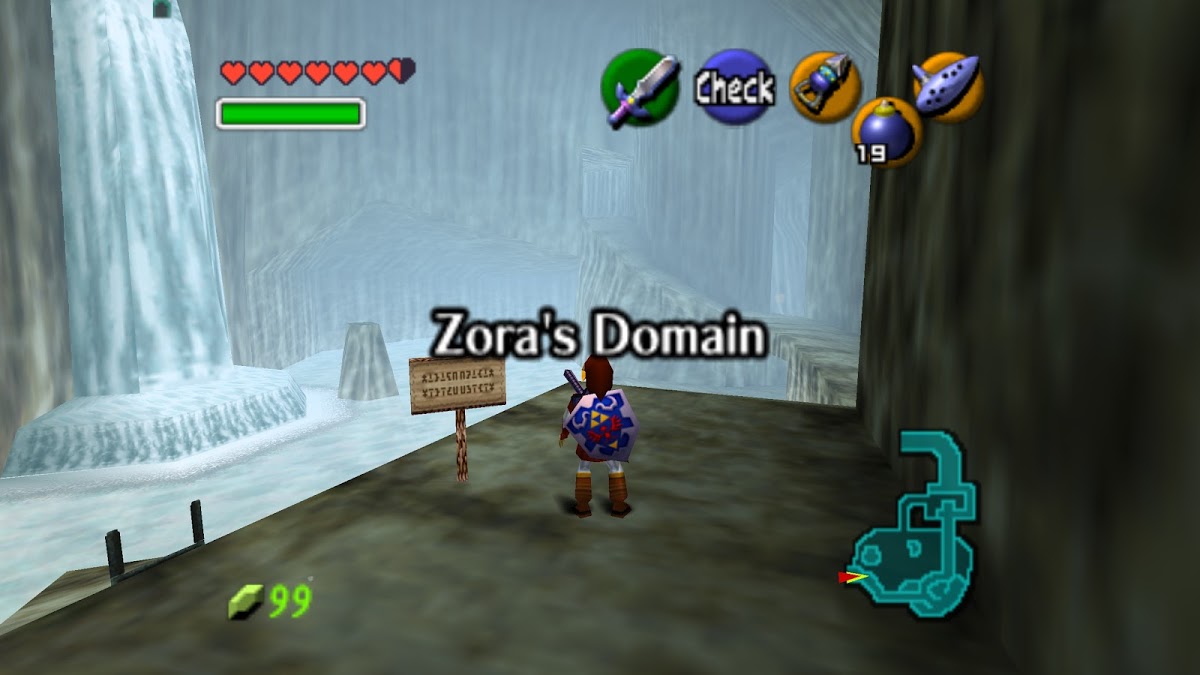 BUT, in the writing of the last piece, I remembered that where I should really look for thank yous and the appreciation for all my efforts is in Goron City, where the people I rescued actually are.
SO, before we venture into this Icy domain, I took a shortcut back to Goron City and saw what they had to say: 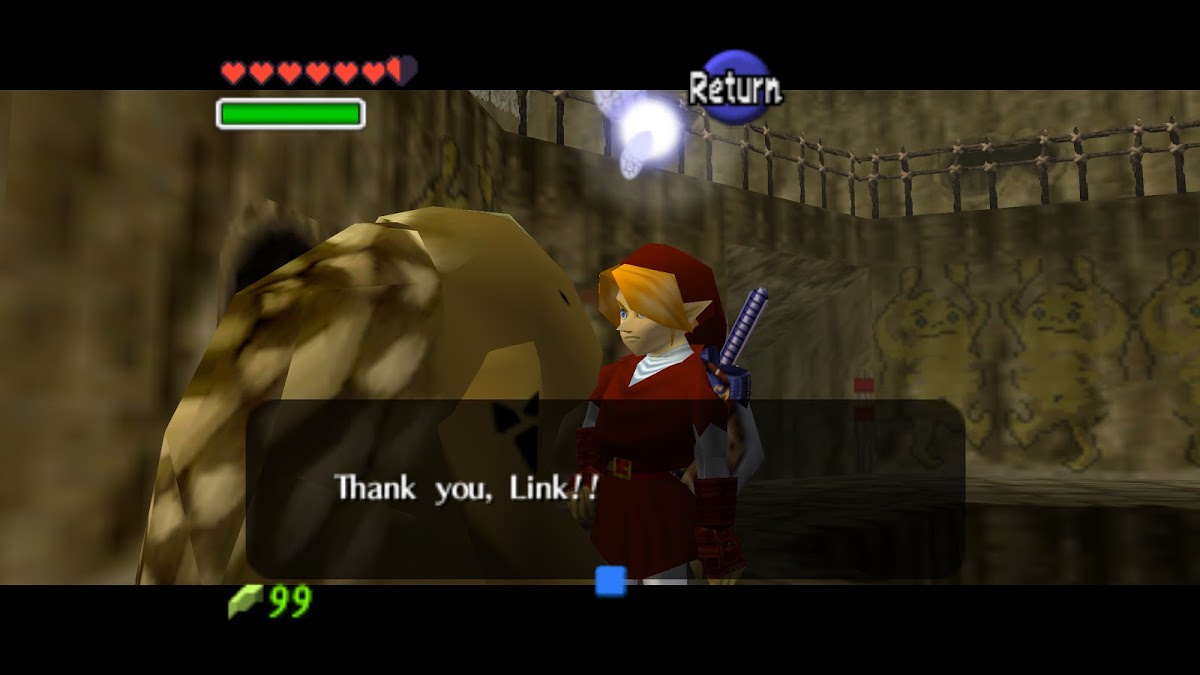 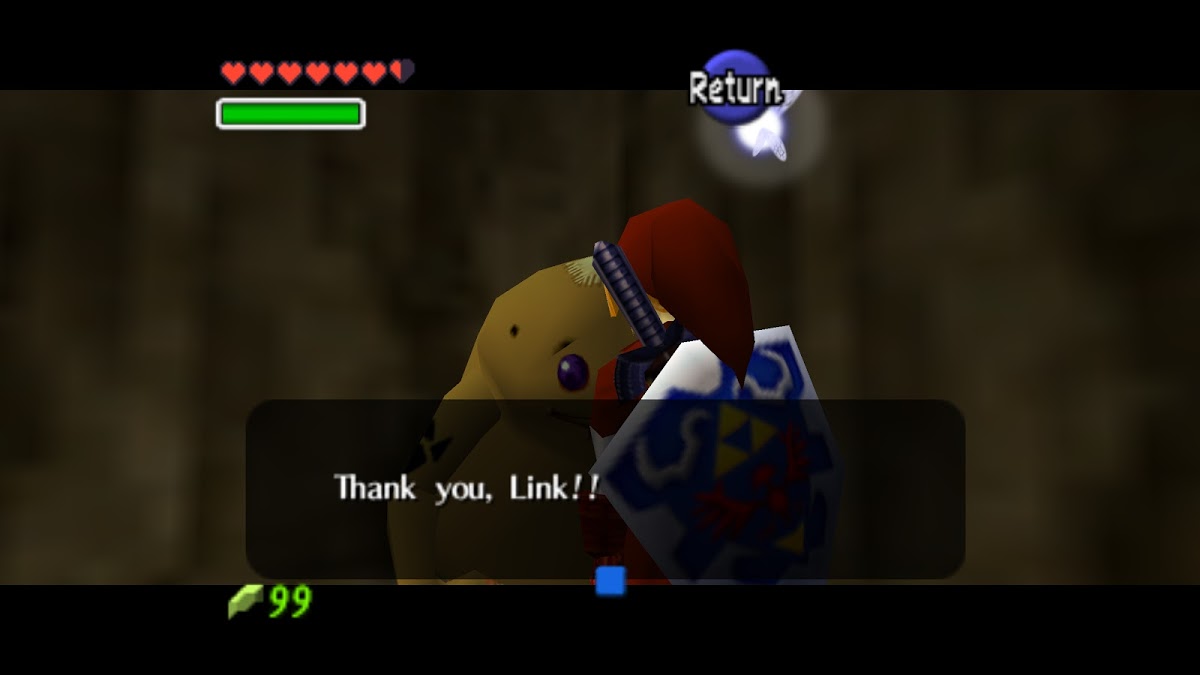 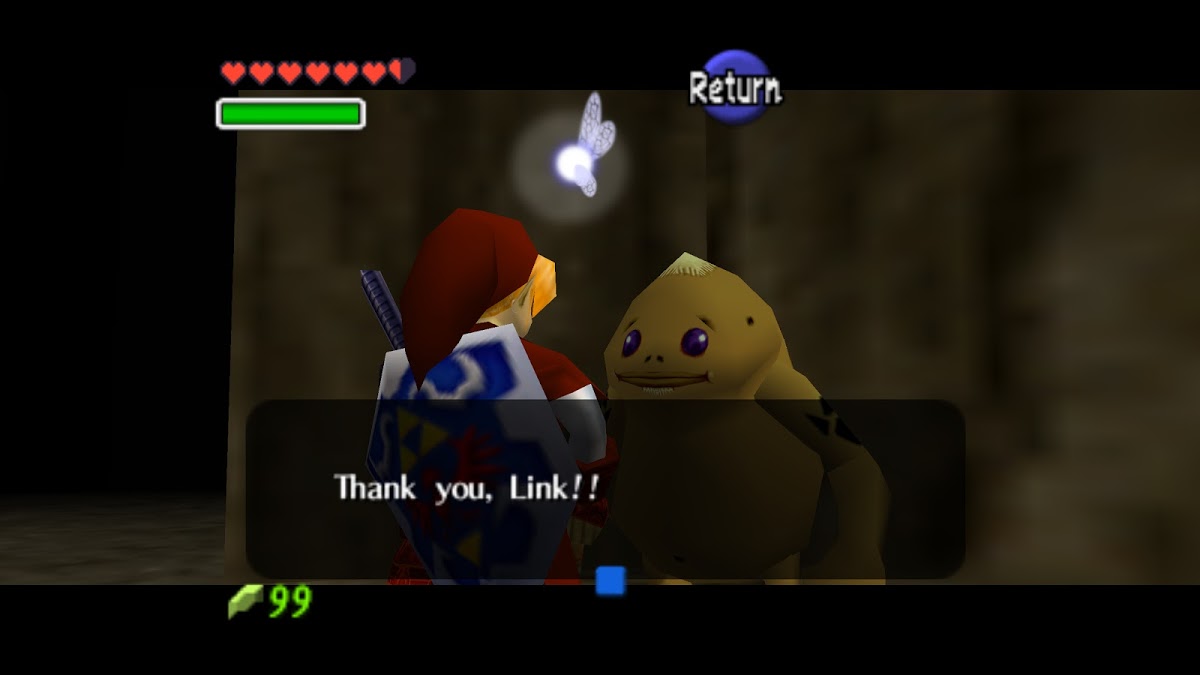 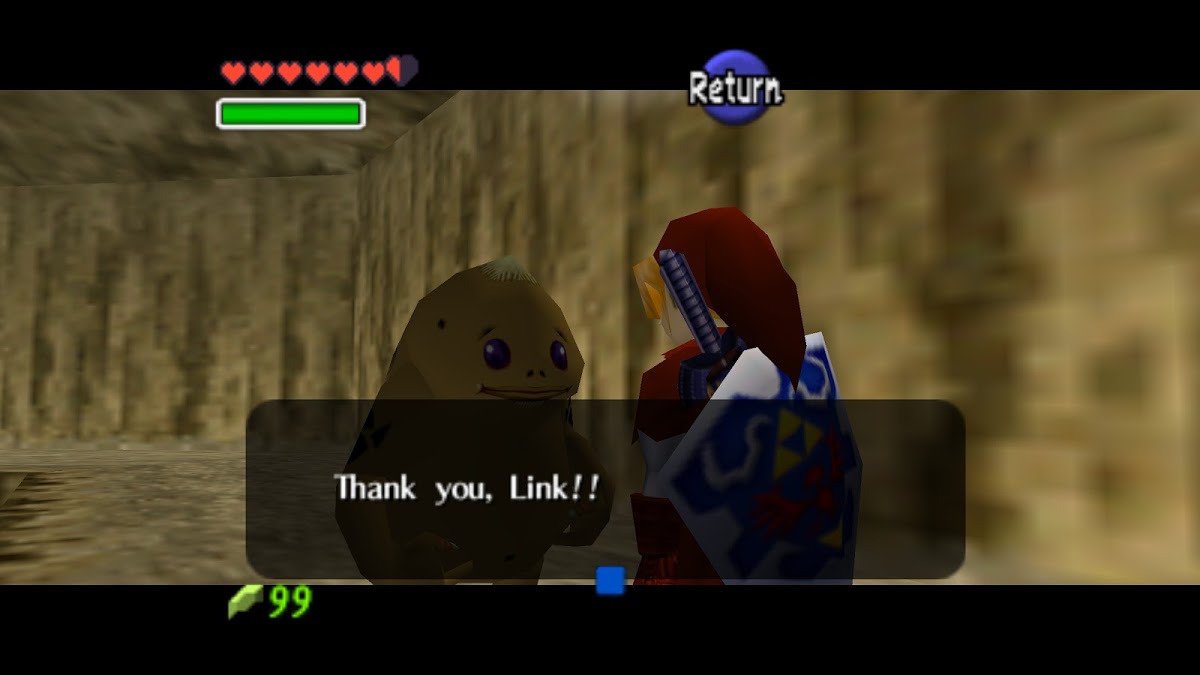 No problemo, kiddo! I got ya. 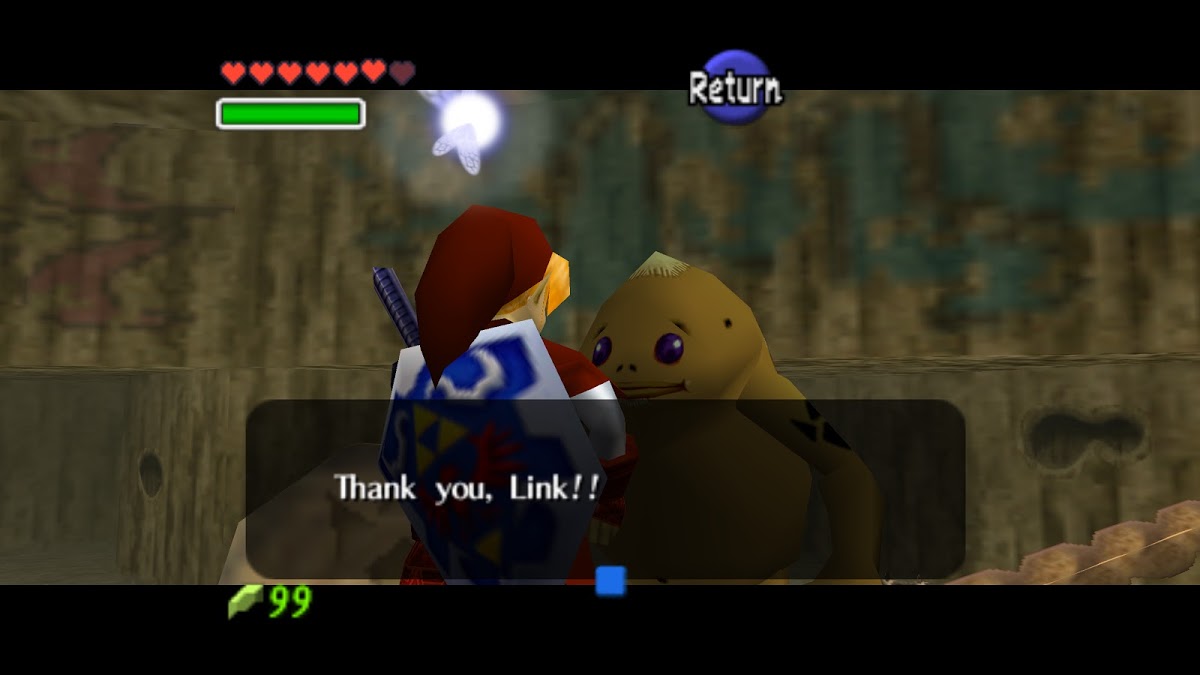 I'm starting to think this is just the same person. 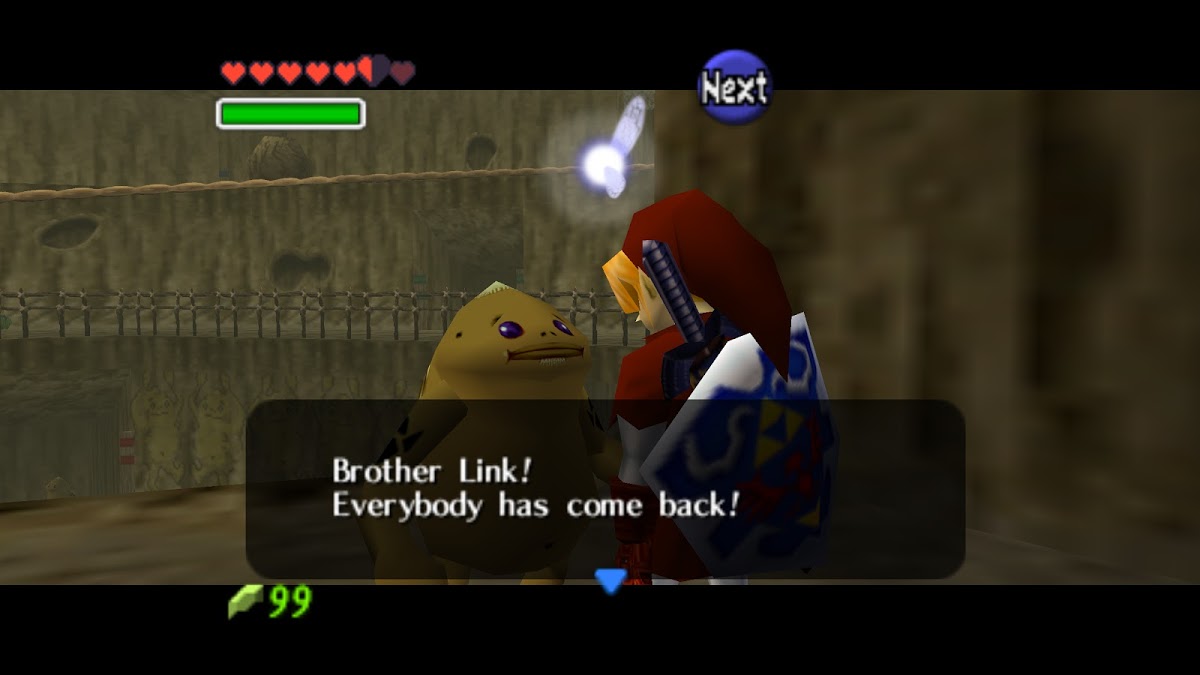 That's a lotta thank you. (This was really six different people)

And the kid still wants to be like me, and who am I to judge?

Alright, back to business: 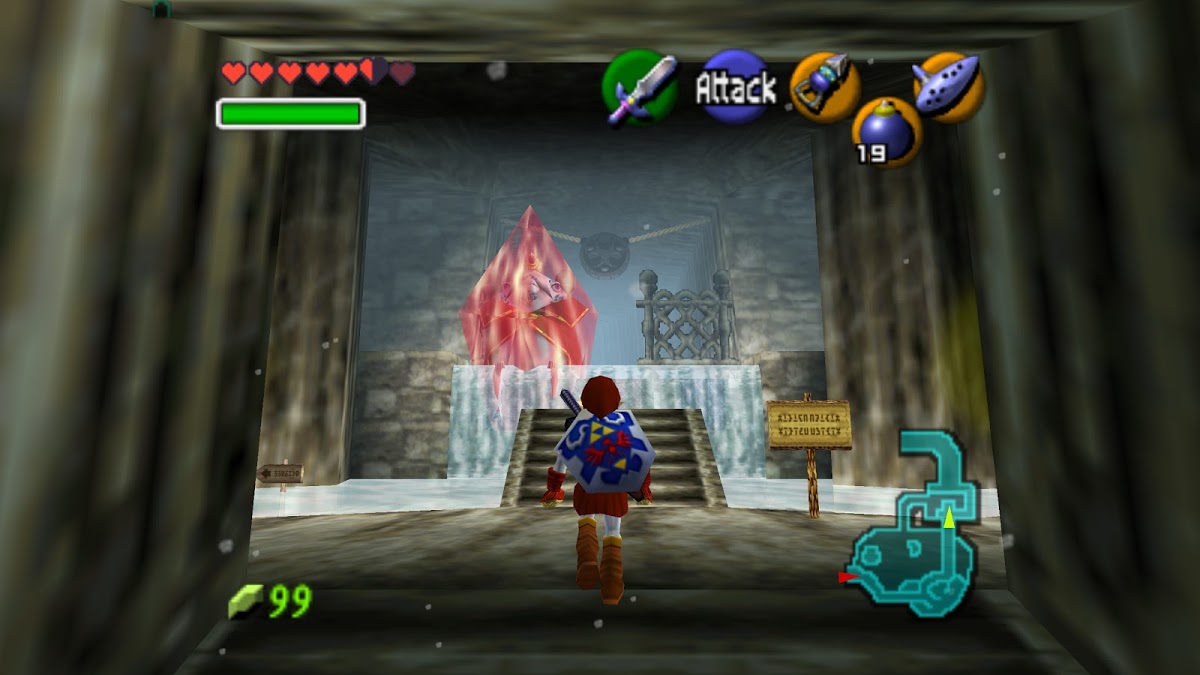 Woah, okay.
So, first of all, there's no one there. Zora's Domain was empty last time, but it ain't nothing on what it is now. The only sign of life was the King there, encapsulated in this red ice. Which I can't do anything about, I tried the usual suspects (hitting it with a sword, bombing, arrow, hammer, zelda's lullaby, don't worry), but nothing. Guess there's nothing for me to do than run behind him, and see good ol' Whale-Boy. 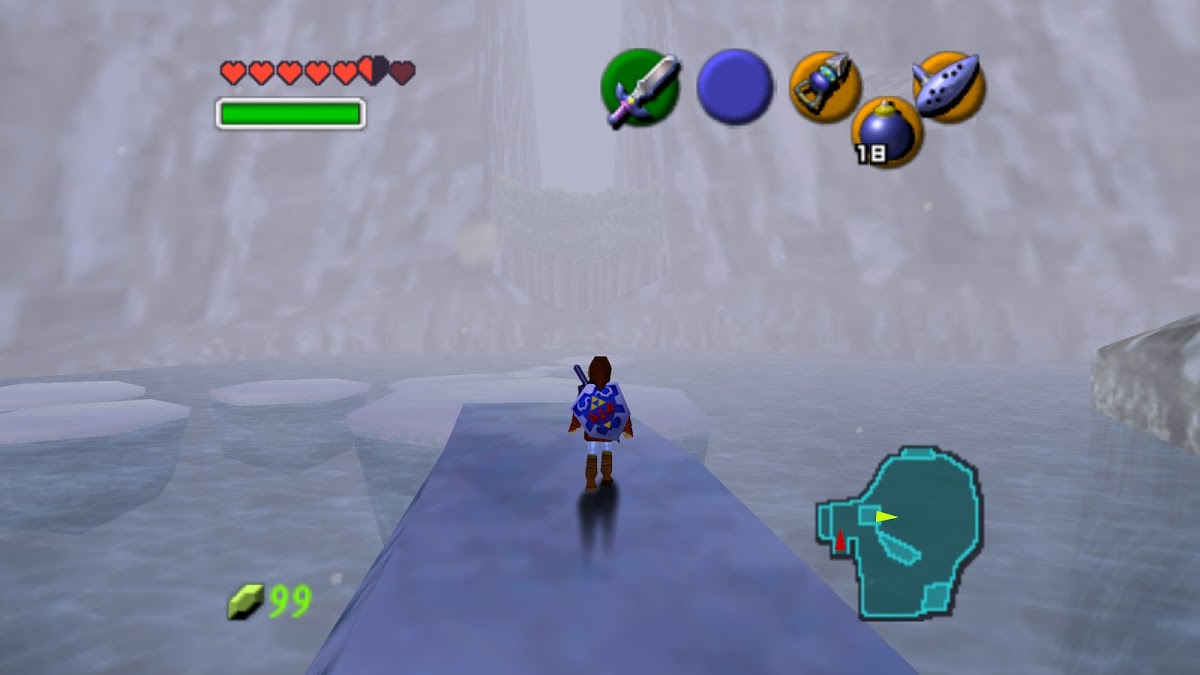 Who's also gone. Instead, there are ice platforms, so hope you like ice physics! And not only that, there is also buoyancy on these, which had me impressed, I must admit for this old game, so impressed I went out and got the piece of heart out there, before I went left (the right way), and entered "The Ice Cavern." 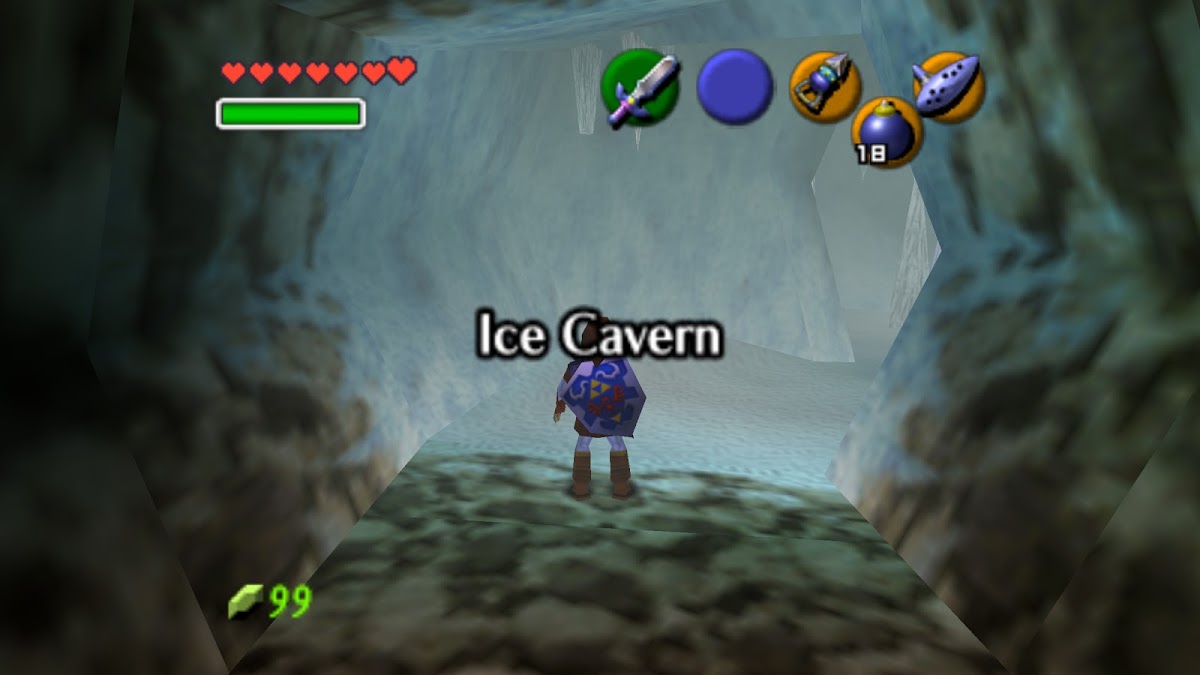 Which is a new place!
Dunno what I'm up for in here, so let's see. 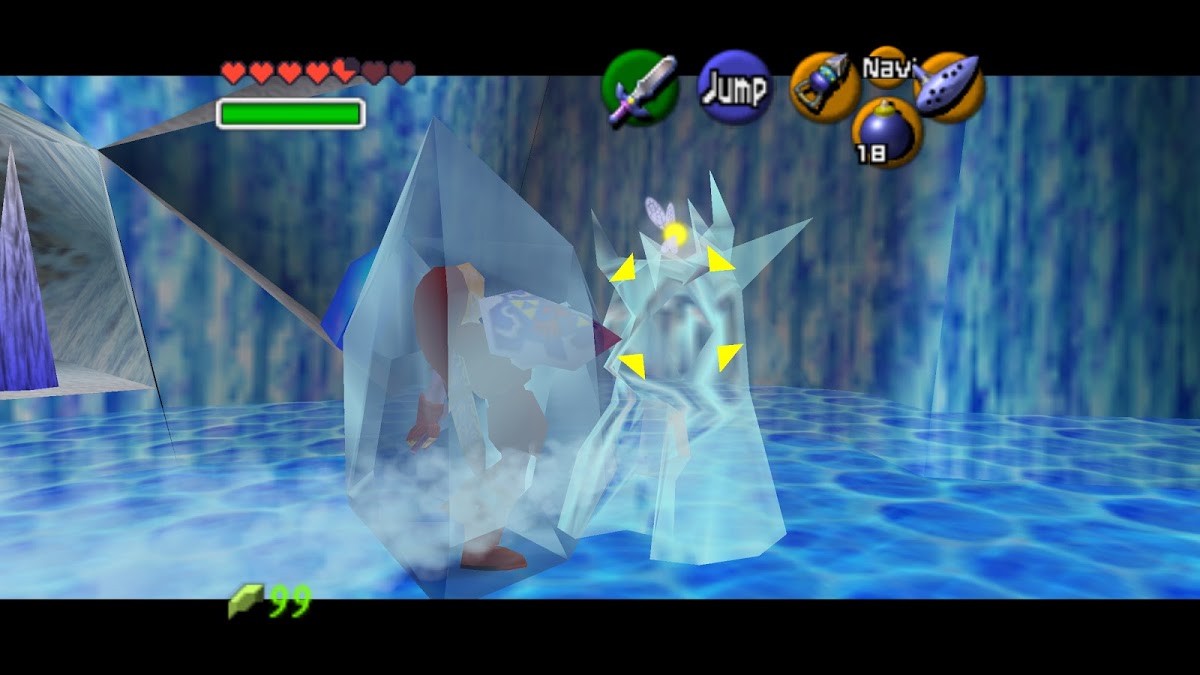 There's these freezing, transparent enemies who freeze-breath and that freezes Link and damages quite a bit and to top it off there's a spinning razor-saw that will hit you if you are frozen in its path.
But when I kill the ones I can see, I still can't leave the room. So I think I need to do something about those red crystals in the back, since I can see now that I can destroy them since there's a rupee in one of them. But I can't find a way (again, doing the usual suspects), until an enemy suddenly respawns next to me and killing it opens the door.
Sure. 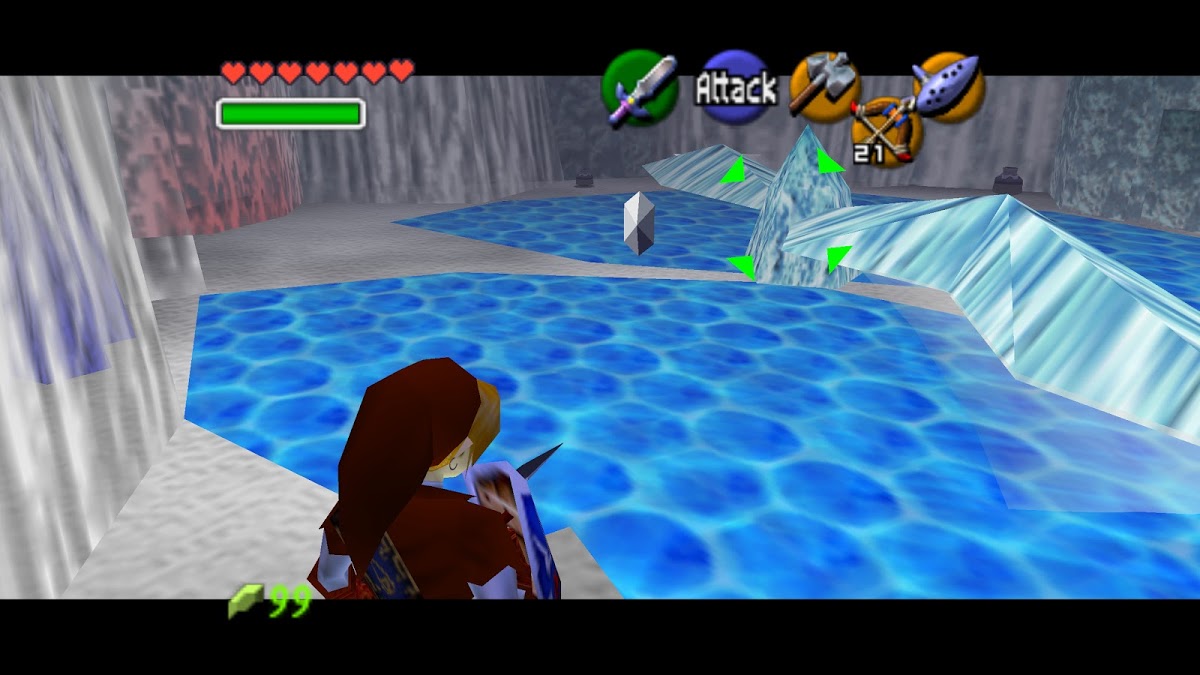 Huh. A rotating windmill blade. Not what I expected.

I go through some more rooms that are fairly basic until I get to the final big room, where there's a big blue fire blazer that Na'vi is very adamant that I should check out and so I'm thinking it's the same as the last time where shoot an arrow through the fire and hit the red crystals and it'll melt them. Right? 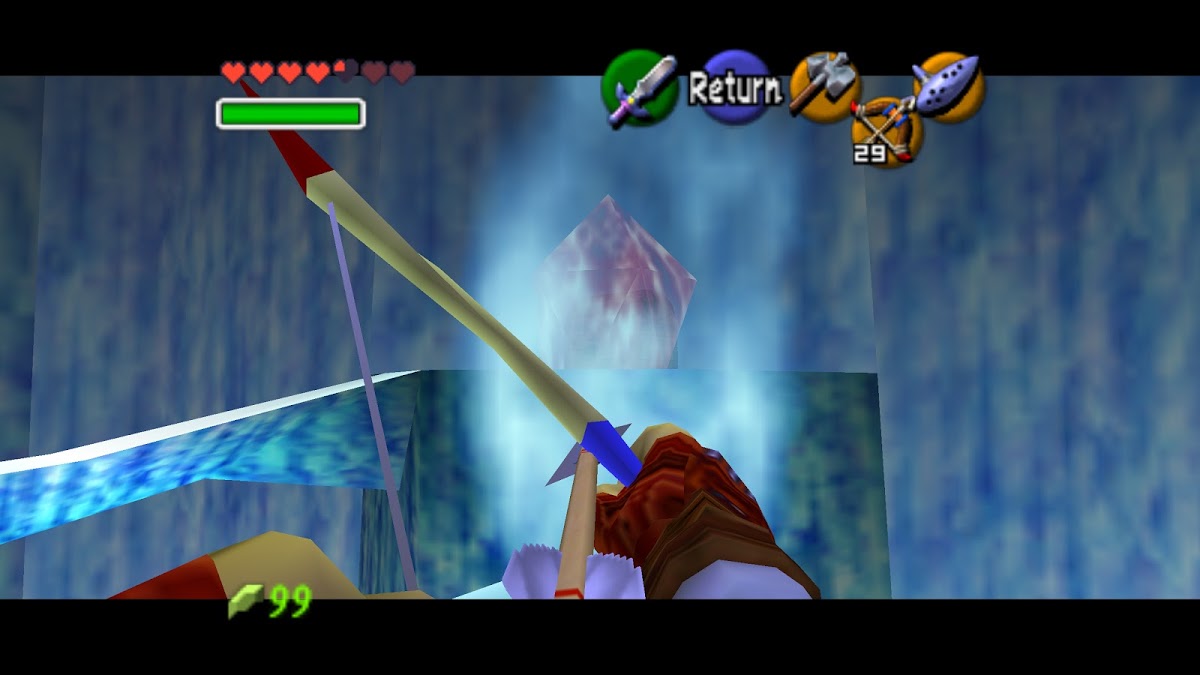 So I was pretty stumped, and tried a bunch of other ways to get the fire to the crystals, but nothing worked (and they've, of course, also taken my ability to hold a stick away from me), so I *ahem* pray to our google overlords and find that the answer is to capture the flame in... 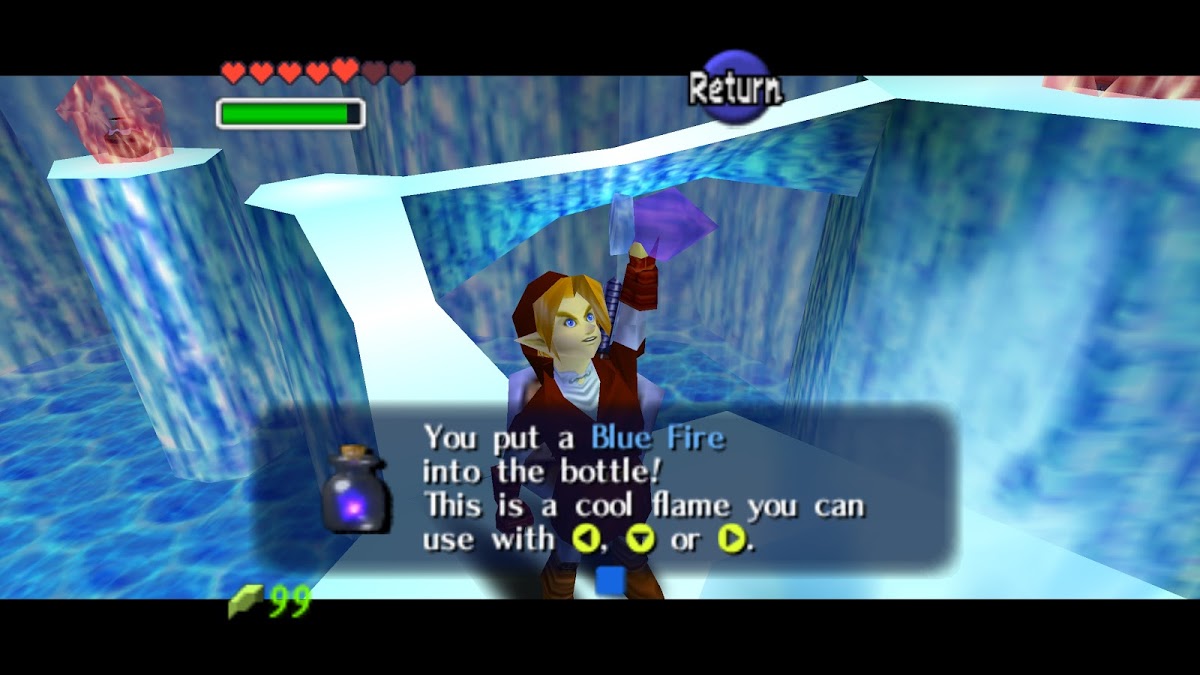 Whatever, what's in this chest? 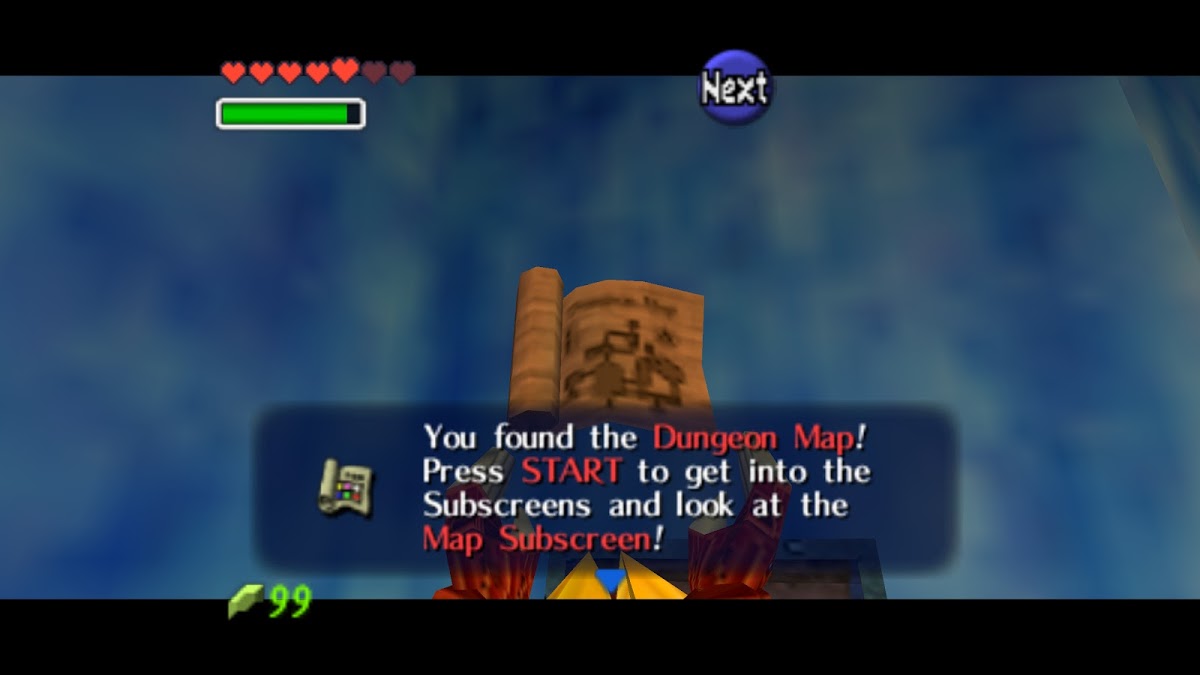 Oh, this is a dungeon I guess? However, looking at the map, it's not a very big one. So let's just plow through it.
After that I grab some more fire-in-a-bottle and head back to the windmill room where there are doors blocked by red crystal ice. Luckily, inside the first one is another blue-flame blazer because I was doing this a lot 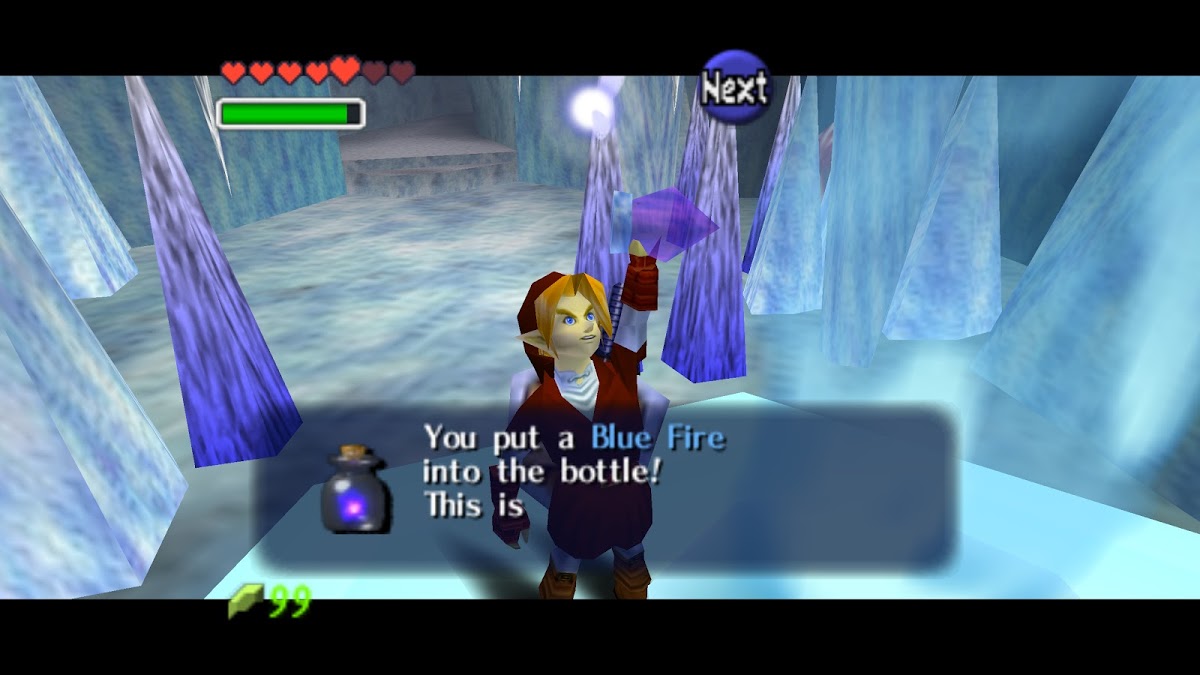 and once more to open the chest in that room. 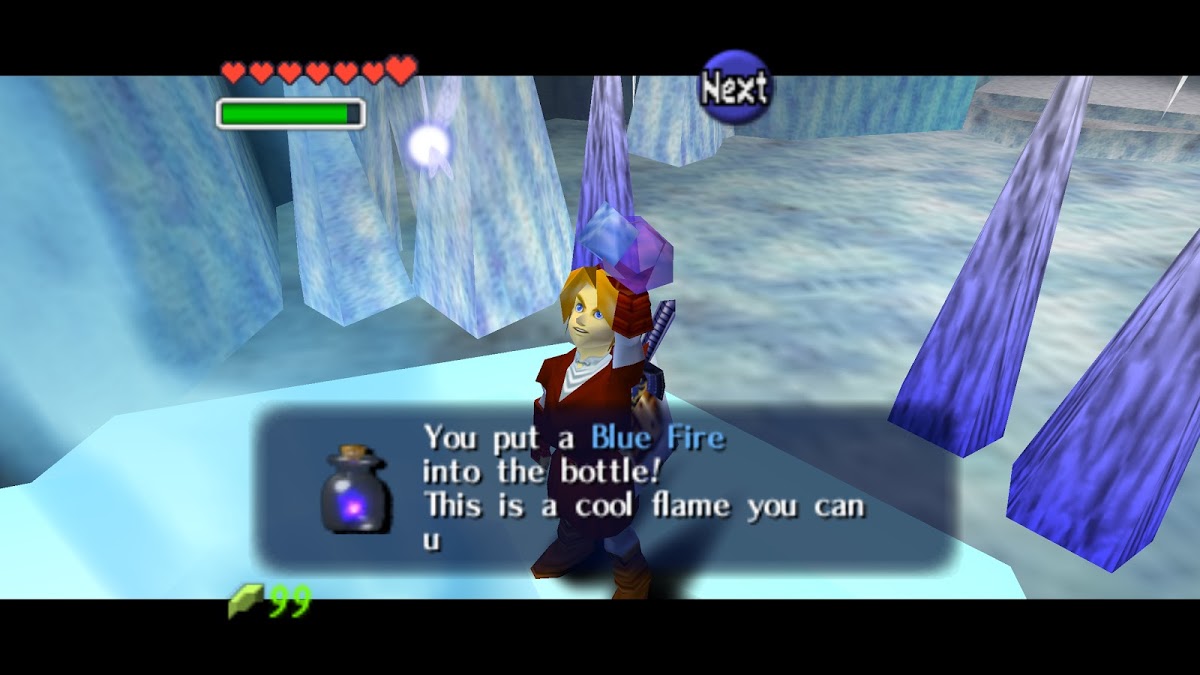 where I got a compass which seems rather pointless because there's only one big room left, so once again, more in the bottle and head into the big one: 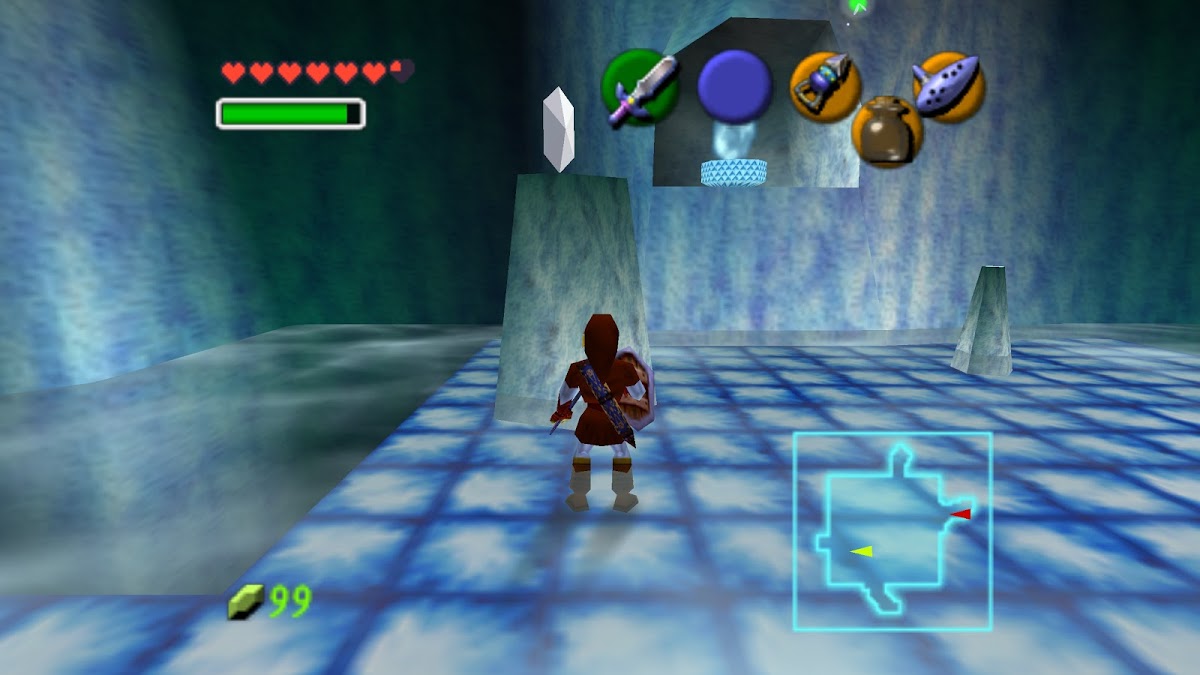 Which is this big square with pillars with grey rupee-like things, which I KNOW are things I have to collect to progress, red-coin-style, from a previous room, but this one (and two others like it), I can't reach.

That is, until I see that this room 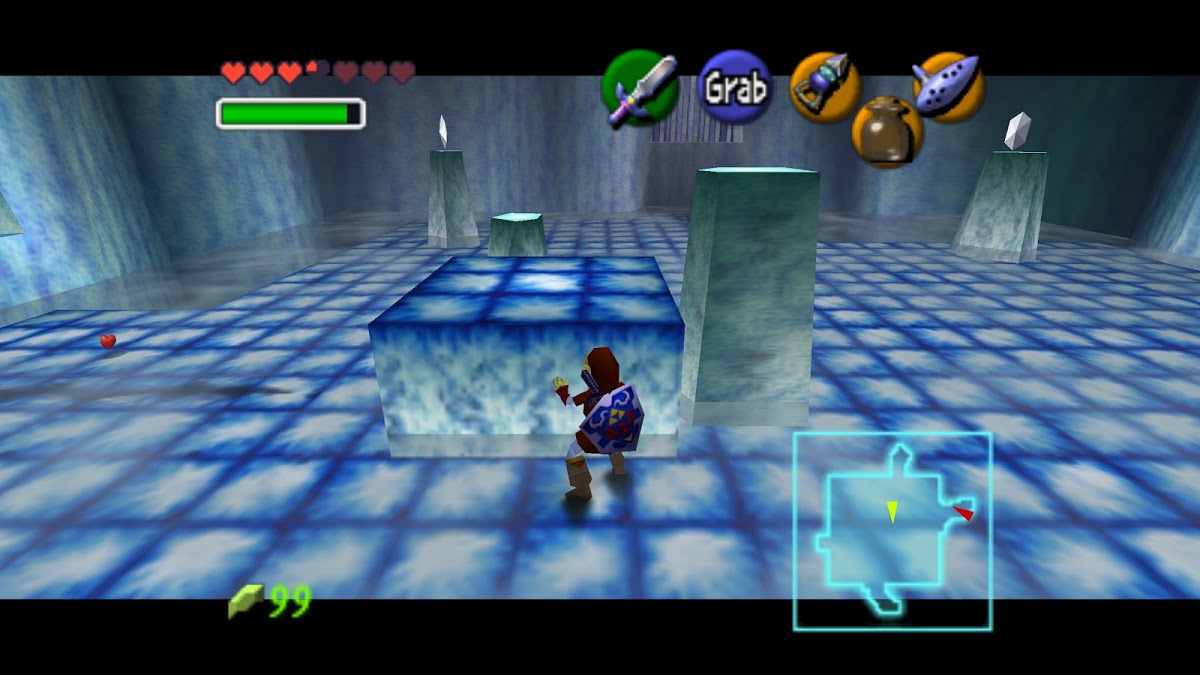 is a push-puzzle!
Which, if you don't know my made-up-term for this kind of puzzle, it's the puzzle where you push a block and it slides as far as it can, and you're meant to get it to the right spots to get up the pillars.

So I push around and around and get up to the flame and up to the other exit where I get the last crystal and then I just gotta get to the exit which I also need the block for. However, I can't seem to work out how to push the block over to the exit in a way that works, so I fumble a bit around and finally just try the thing I think isn't supposed to work and... 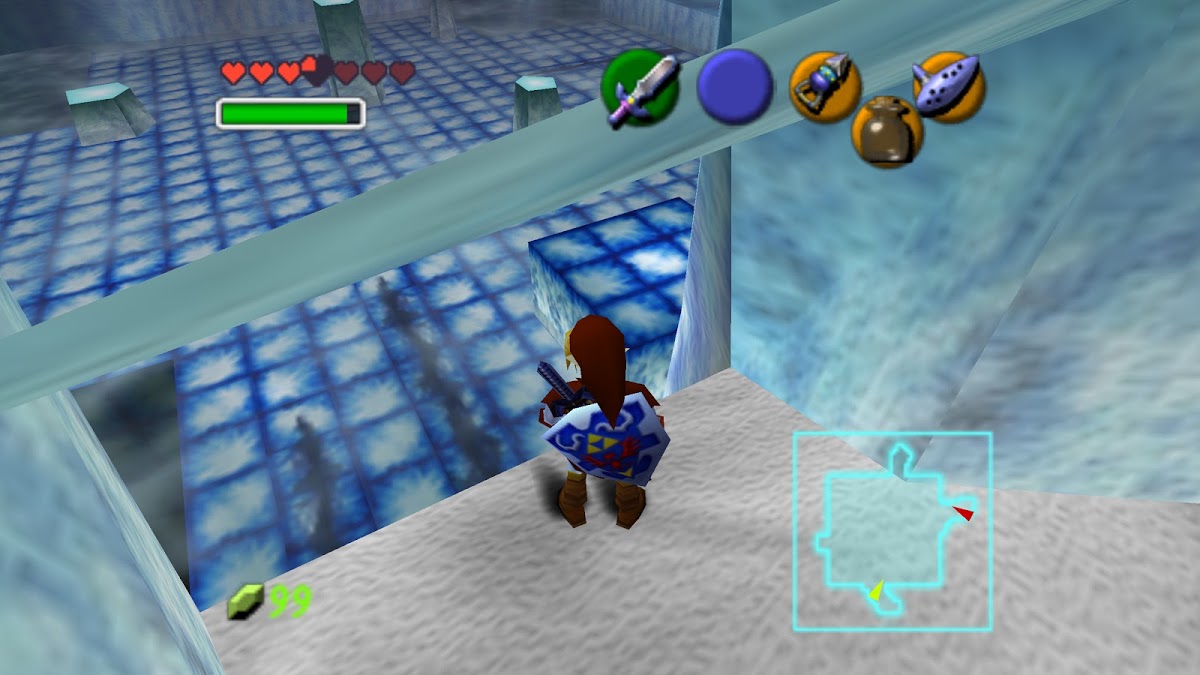 I'm... pretty sure I was supposed to get the block UNDER the exit and not diagonally across it. BUT who cares! I could make the jump, it's part of the game.

And now we're in the final stretch where we finally learn a valuable lesson: 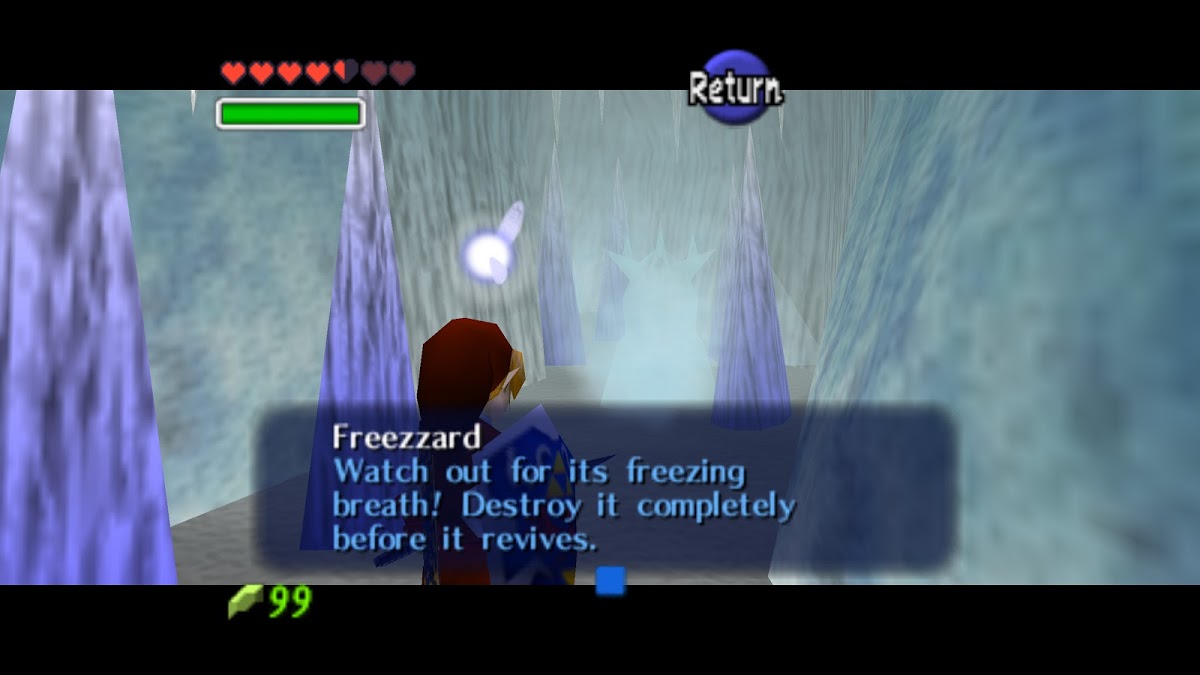 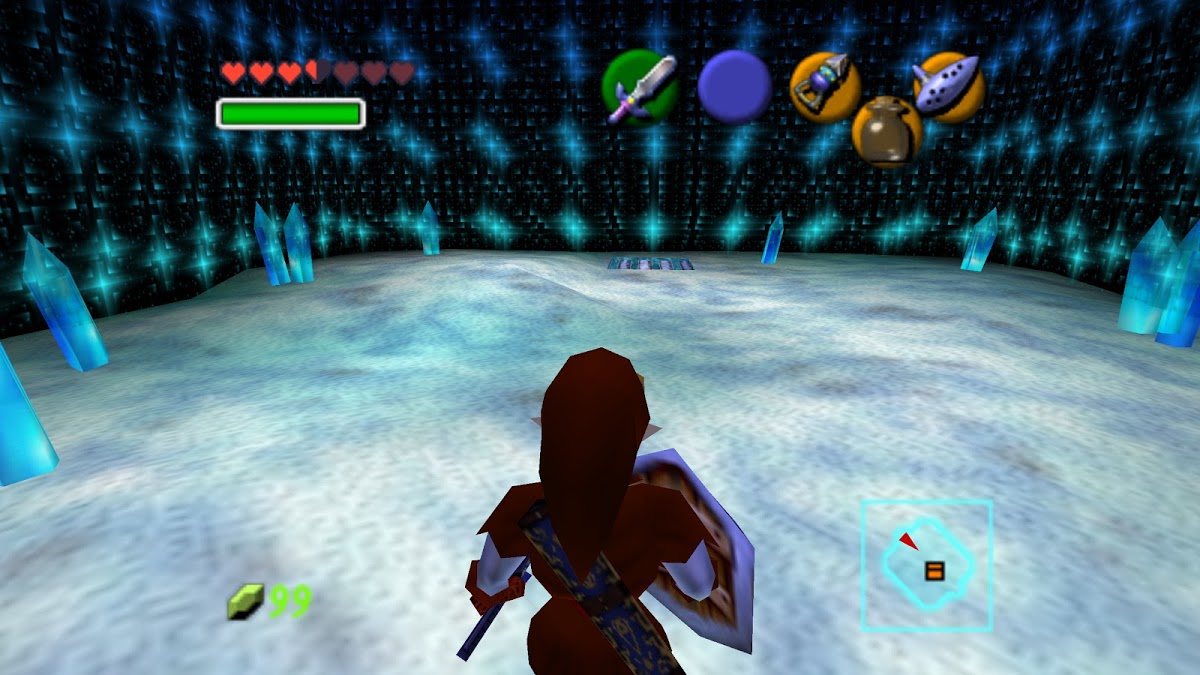 And then I enter the sci-fi room. I have no other words for it. It's just actual space.

In space, is a white wolf that only takes a single sword hit and a chest appears and chests in space gives you 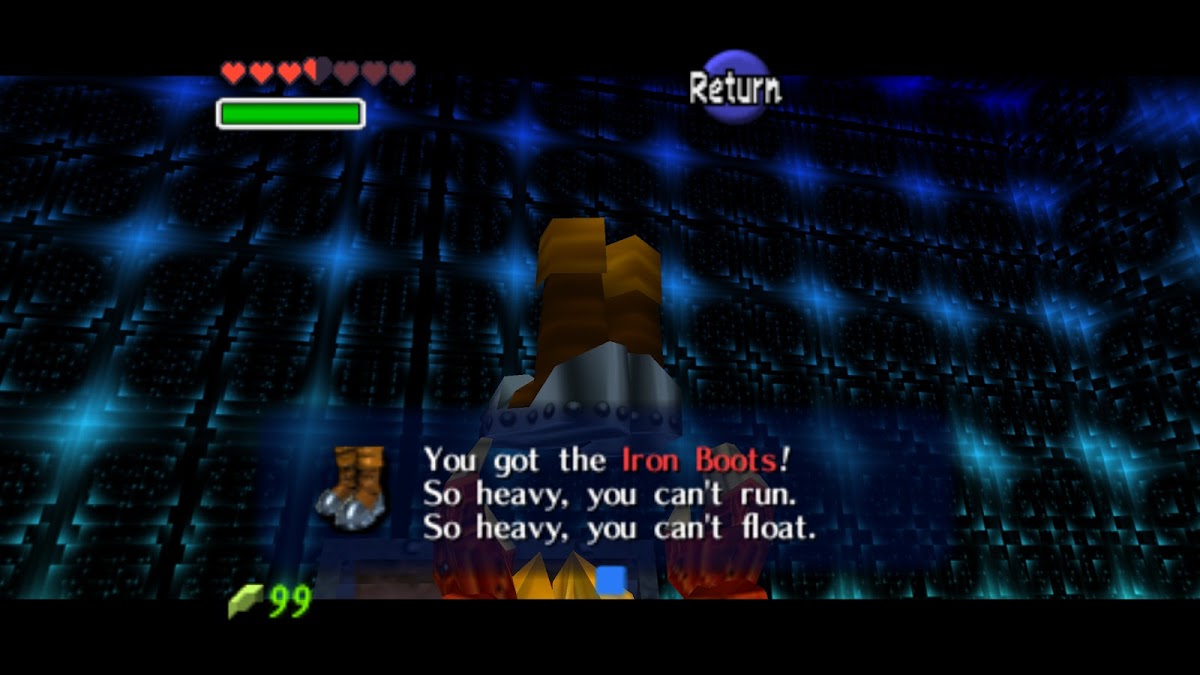 Boots.
Oooh I've heard about these... Oh boy, you better know what I'm about to face. It's gonna be... iron boots. For days. 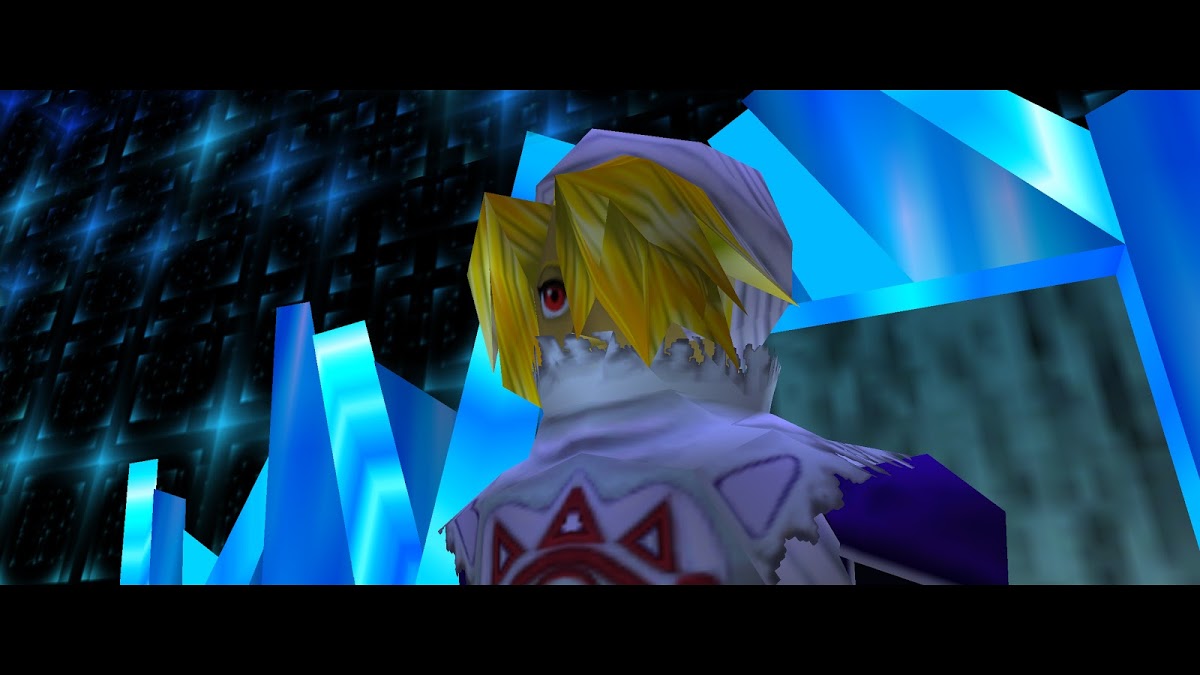 "I'm sorry, Link", she says. "This next temple is why I don't want to do this and sending you out instead even though I'm far more competent.

Hello there. Can I exchange these boots for something more useful?

No? Instead, she tells me that all the Zora's are gone, and have been trapped under a sheet of ice, except for one. GUESS WH- 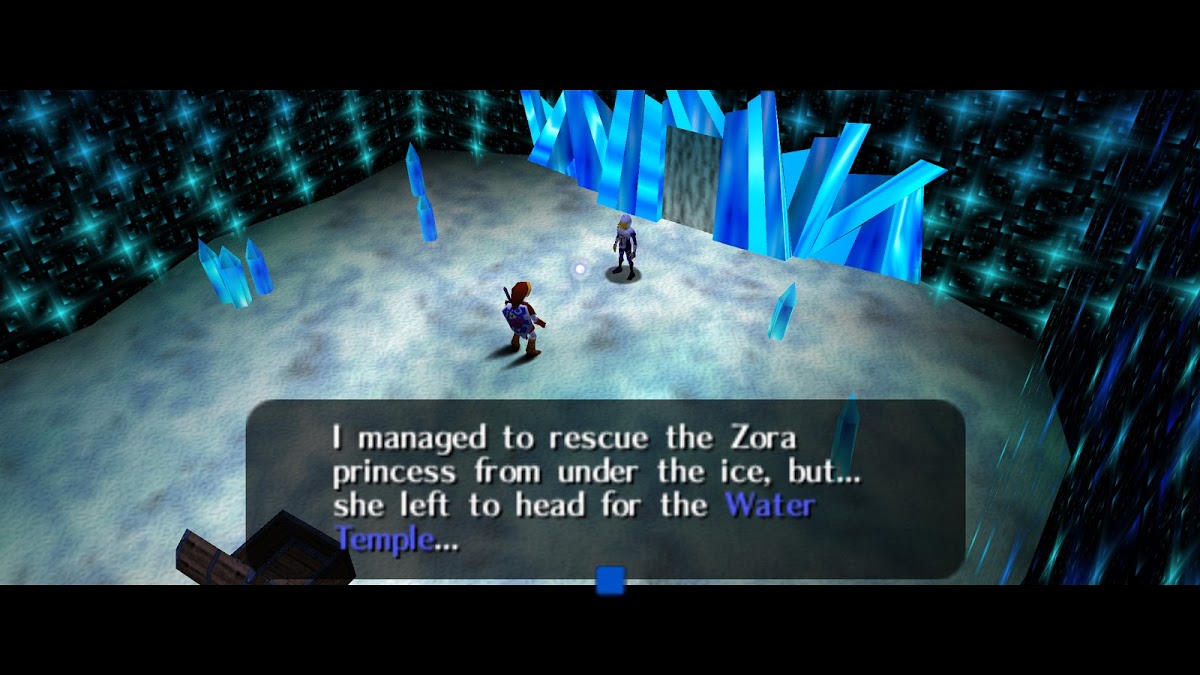 Of course you did.
Well, at least this tells me that she will be the sage. So we'll only have one more strange scene with her? Let's... see how they handle it before I say anymore.
But I'm going to the water temple! Yaayy! I only heard good things about this place! 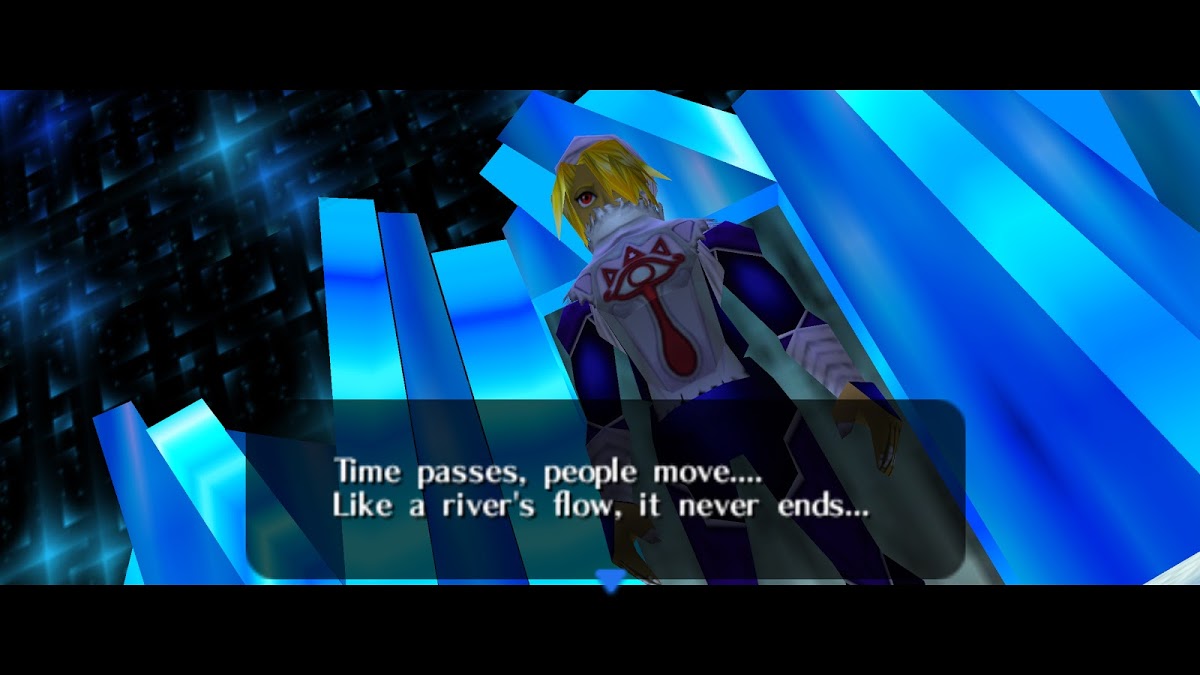 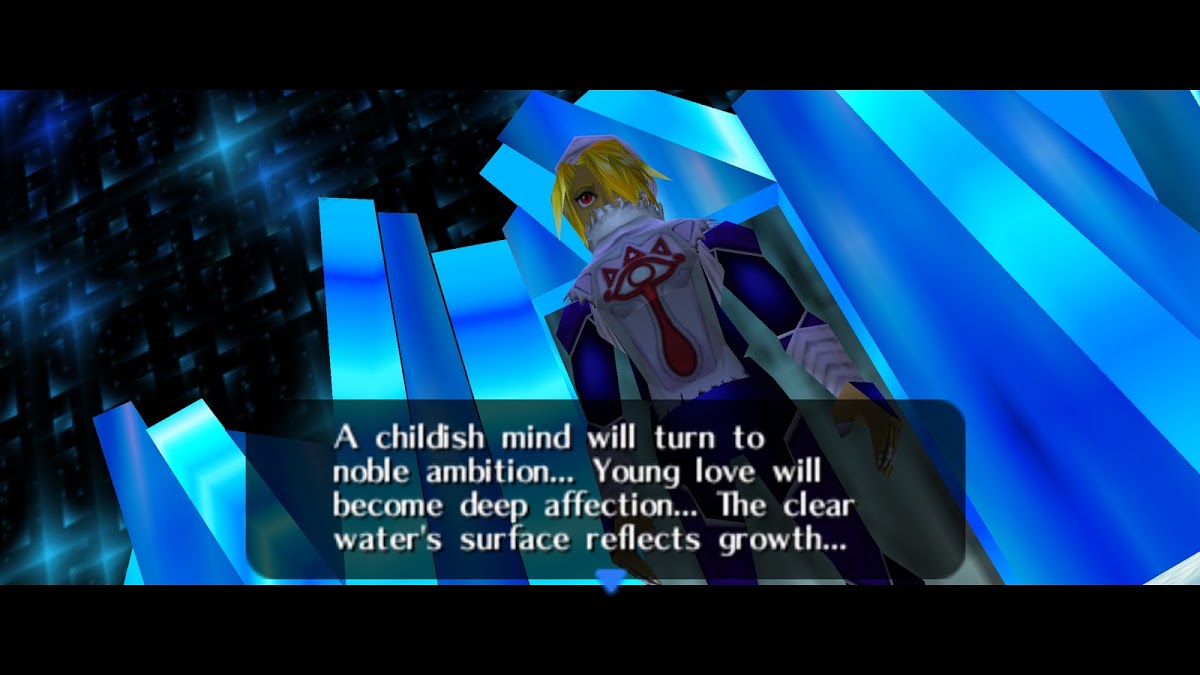 Got it. So how these boots work? 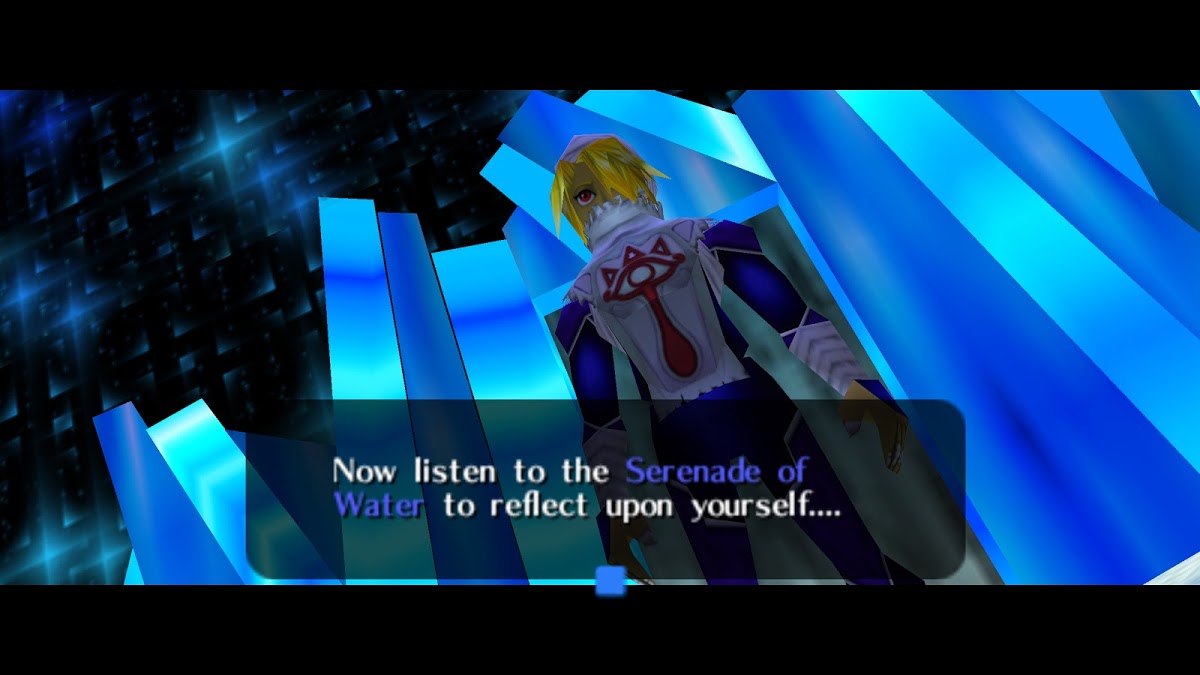 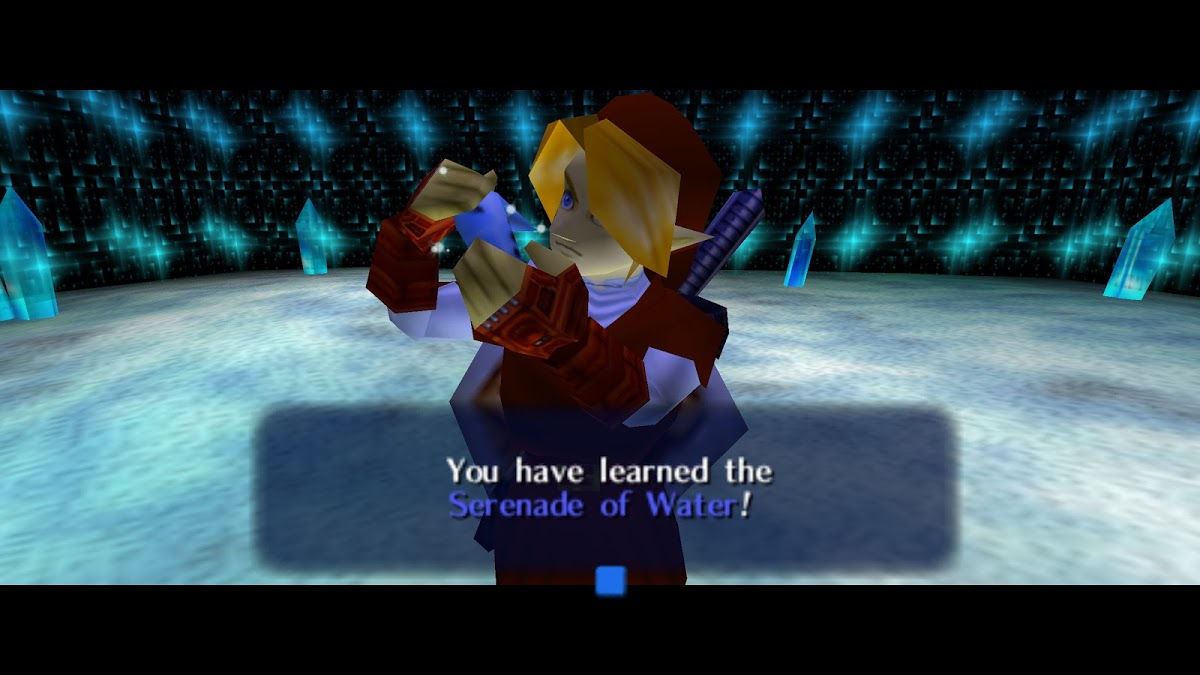 And then Sheik vanishes like she do and all I can do is test out these slick sneakers!
Turns out, when you wear them in water, you fall down (surprise) and when you stay underwater for too long, you drown. And every time you want to equip/unequip them, you have to open the pause menu, scroll over to the inventory, and select the other boots.
I'm... starting to see what's so infamous about this. Let's see how fun this is going to be to describe in text form! (...)

But that's for next time! Did a mini-dungeon in one episode so I'd call that all a days work and see you next time for fun water temple times!