Ok, I don't even know what's going on anymore. This episode has got me all rattled.
SO, last time, we found the entrance to the Shadow Temple after much phenageling (that's a word now) around Kakariko village and a crash and some more of that, but here we are: At a door we cannot open.

Soo, all we gotta do is open the door, right?

All right, after all the attempts last time, I believe we can concede that it is just time to Ask Ruto [ahem, zeldadungeon.net], and find out that, sure enough, I need a thing I don't have.

Something called "Din's Fire". Which is a spell handed out by the Great Fairy, not unlike the first spell she gave me but unlike it in the way that I don't have it. And I've seen the Fairy a few times since then and she didn't give it.

Turns out, she gives it when you find her in a specific spot, near Hyrule Castle, as a child.

Back to Hyrule Castle! But, being the stubborn idiot Link is, let's go check out how the castle looks now! He says, realizing he hasn't actually done that yet. 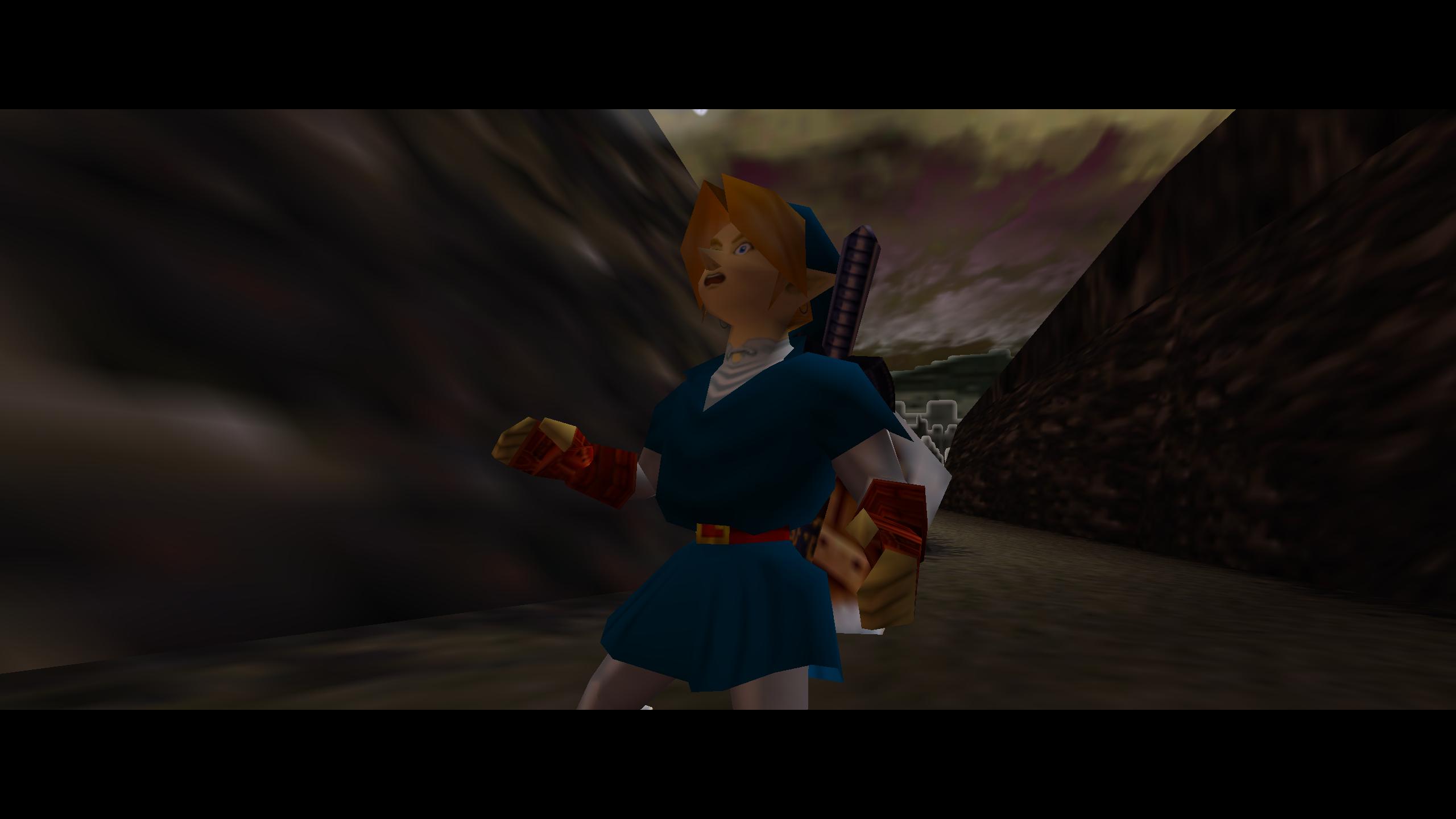 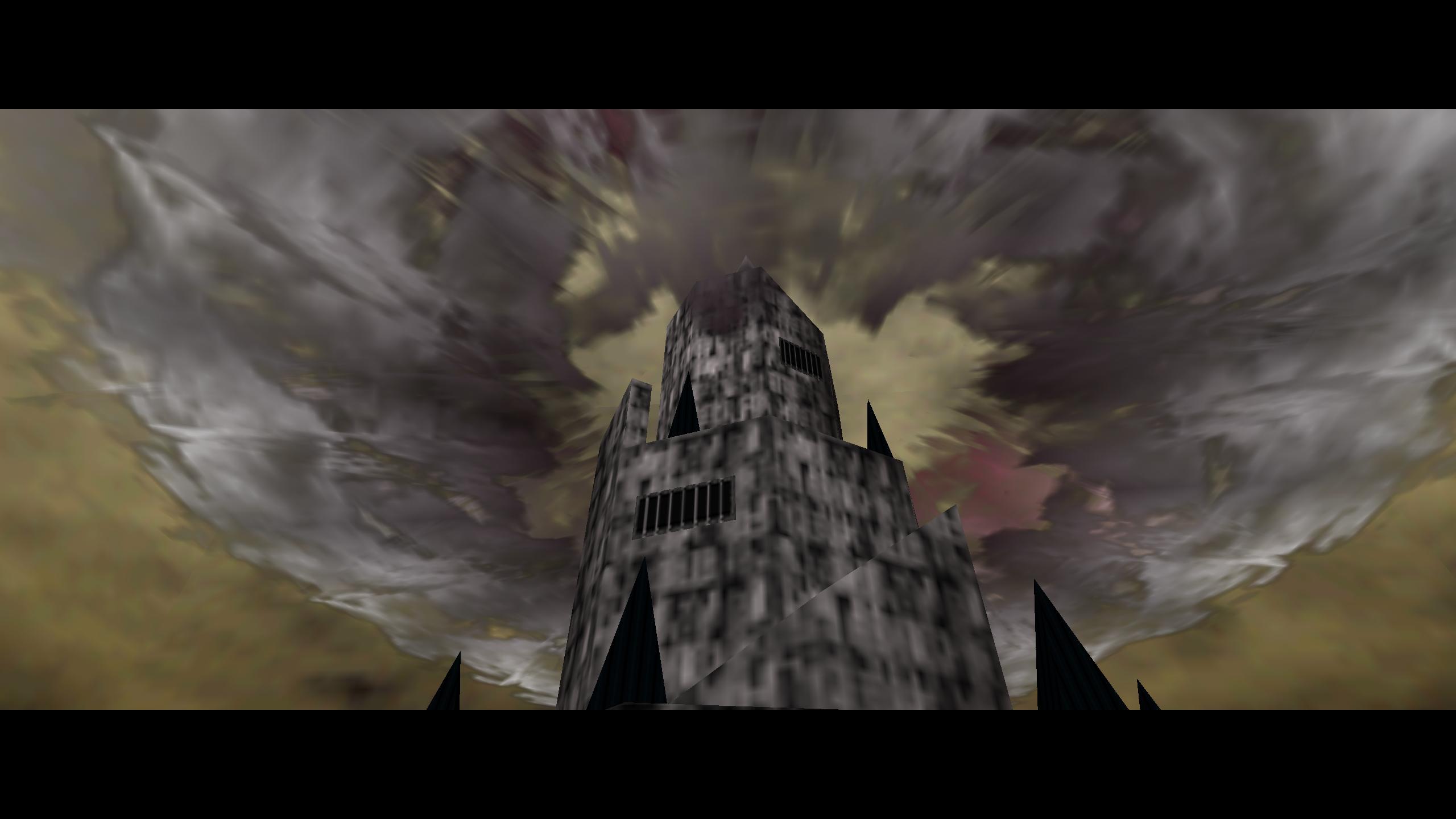 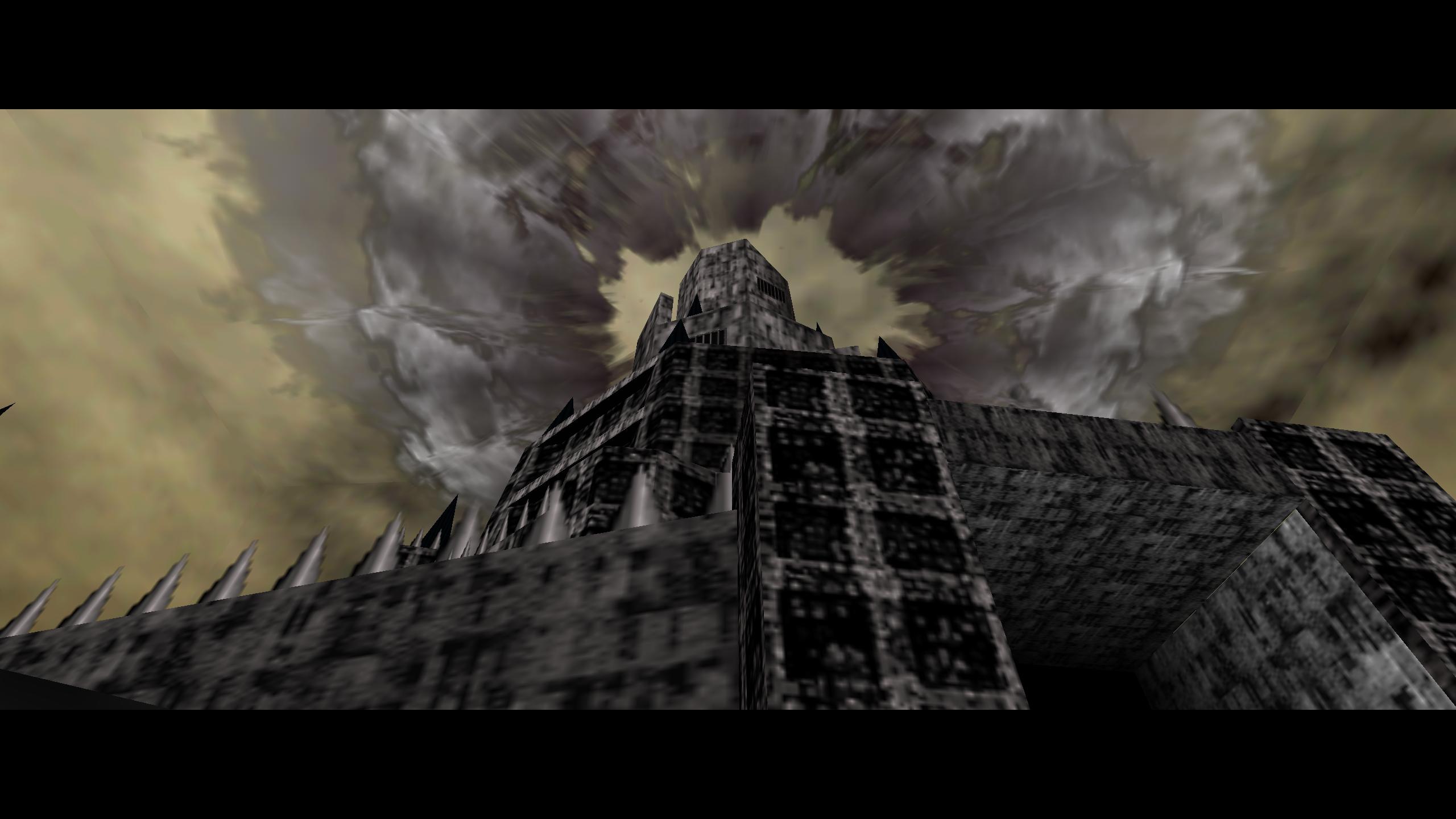 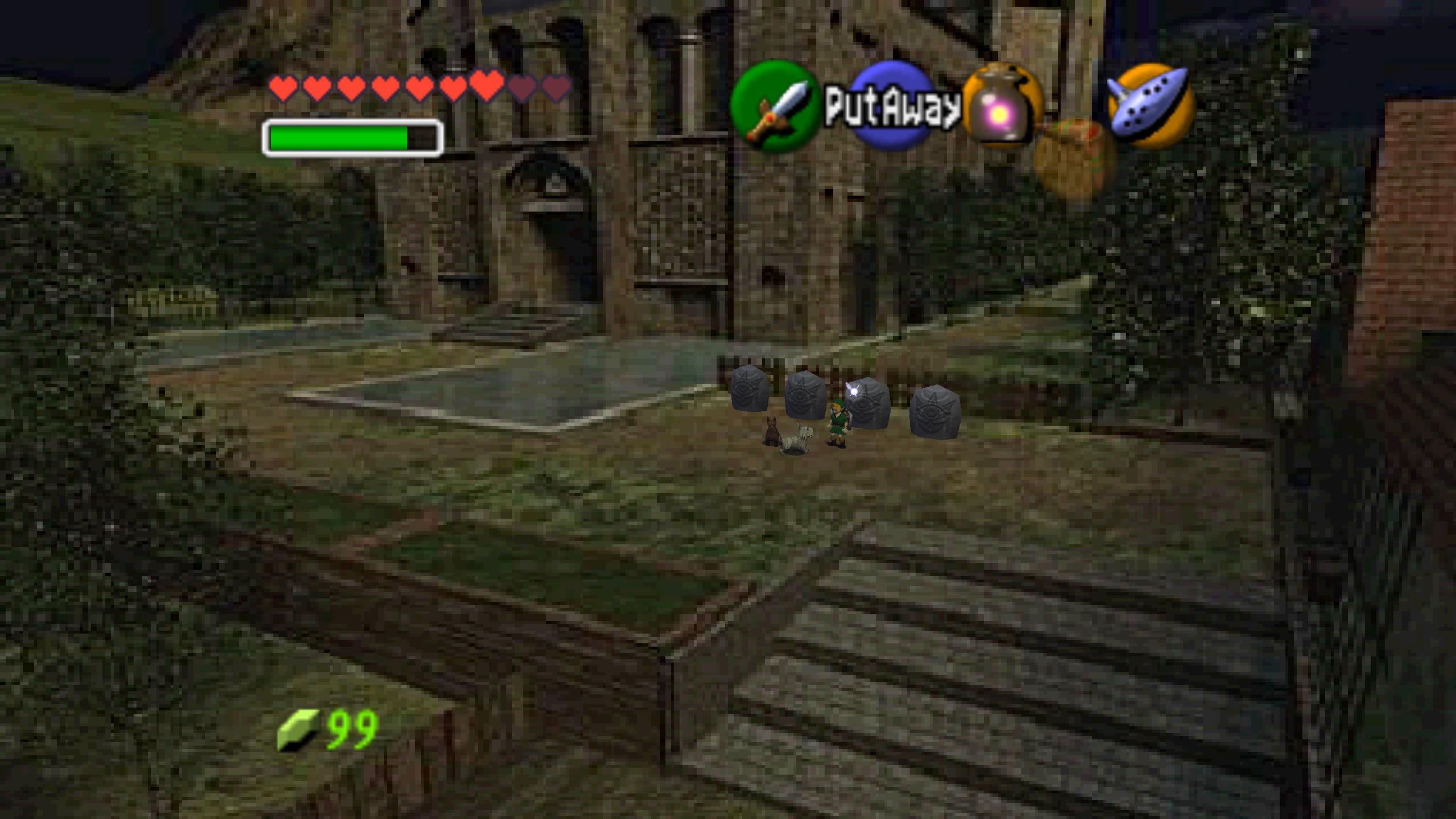 I expected to say happy music, but turns out, it's now a city of dogs. 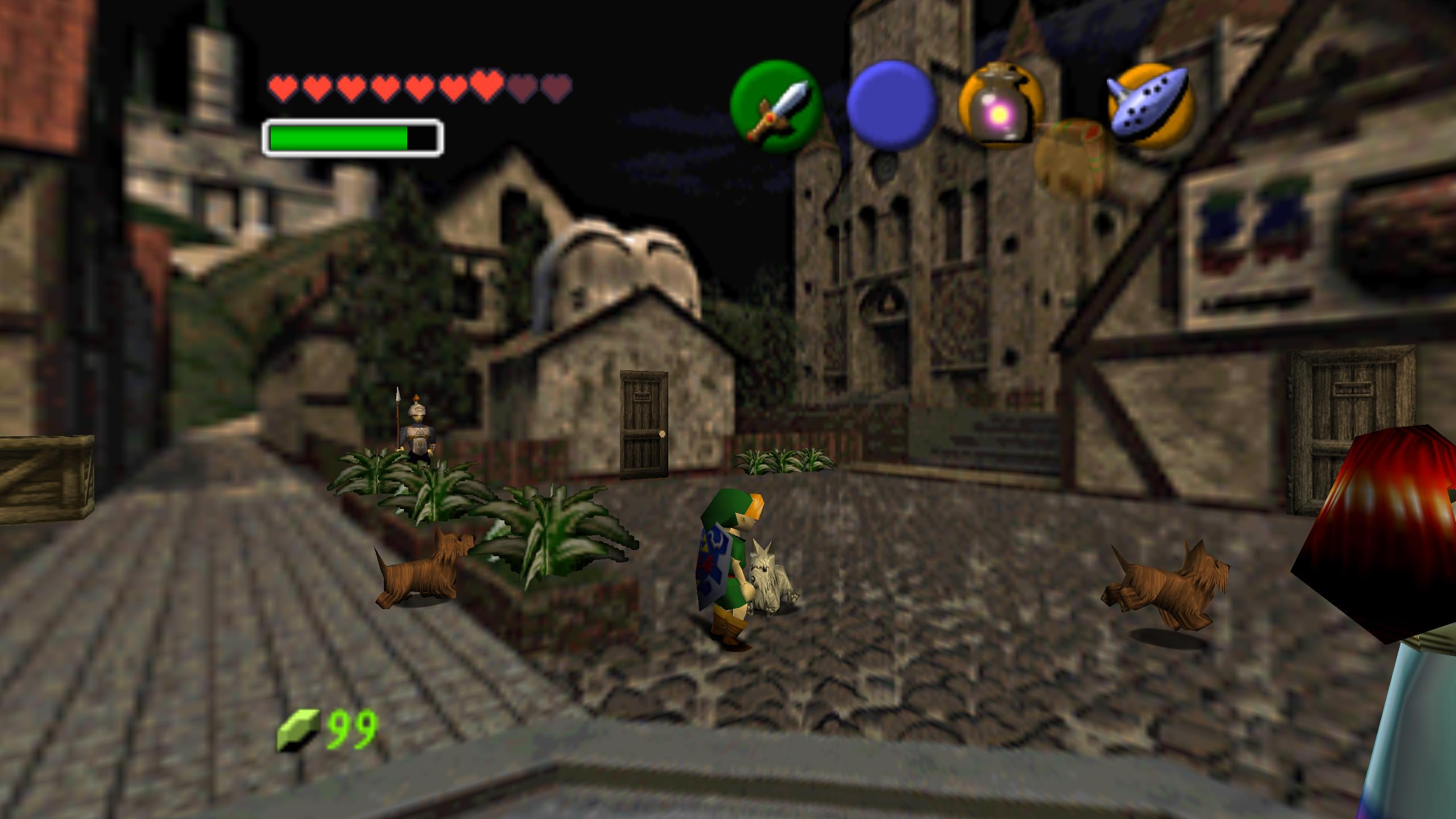 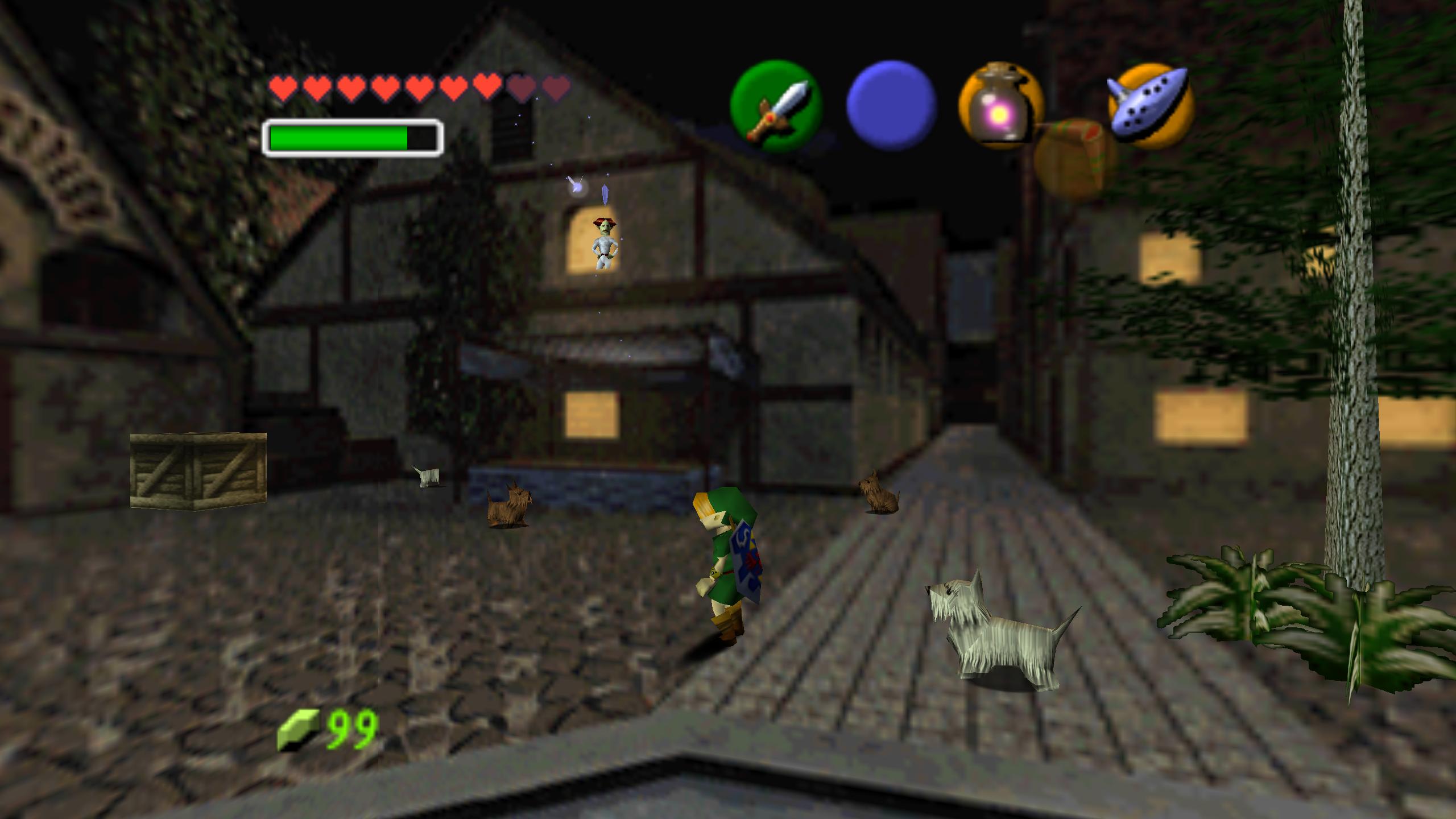 (I have no idea, apparently at night the city is swarmed by dogs. Is this a The Good Life prequel??)

Anyway, here's the rock, if you're so inclined: 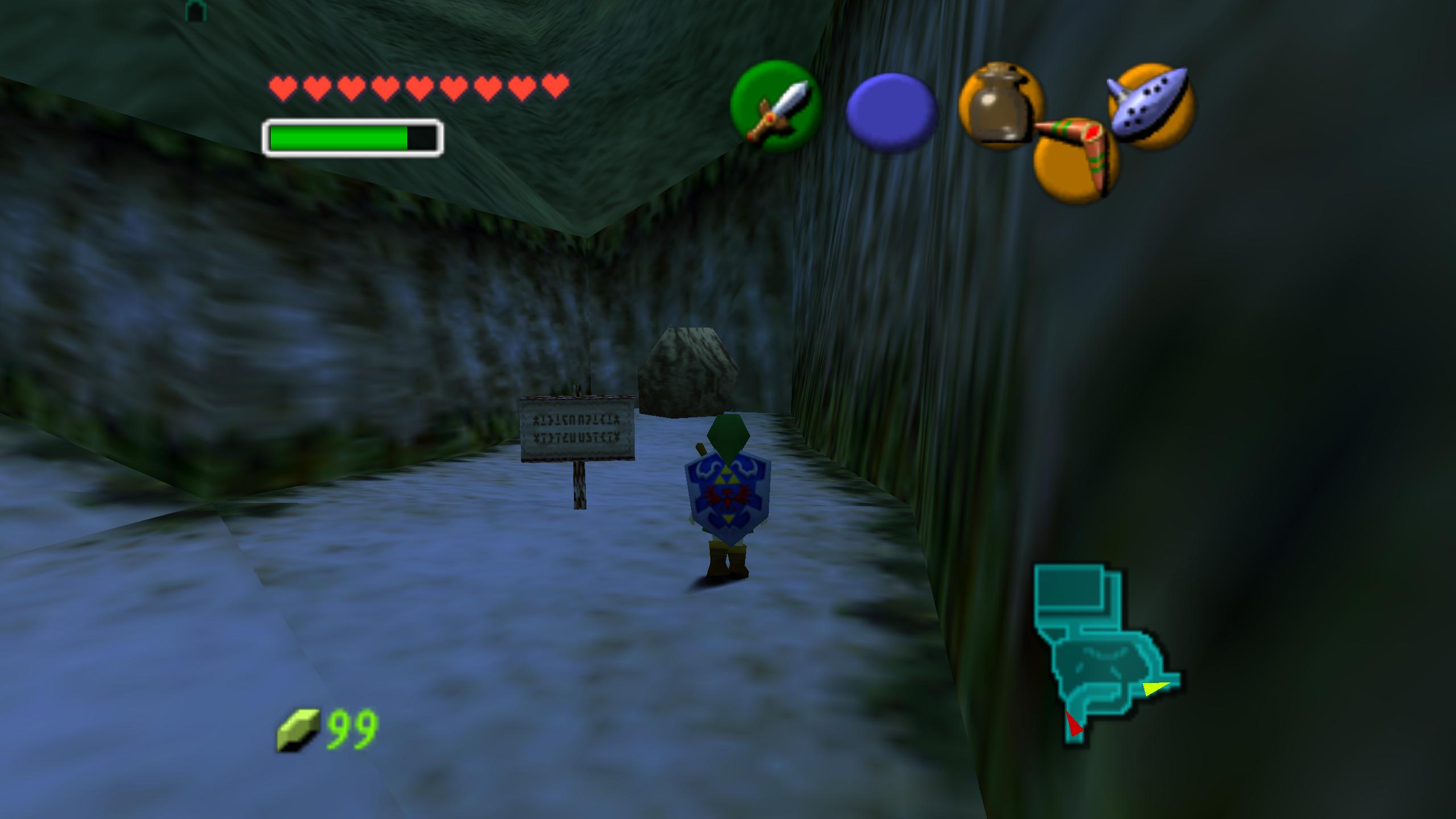 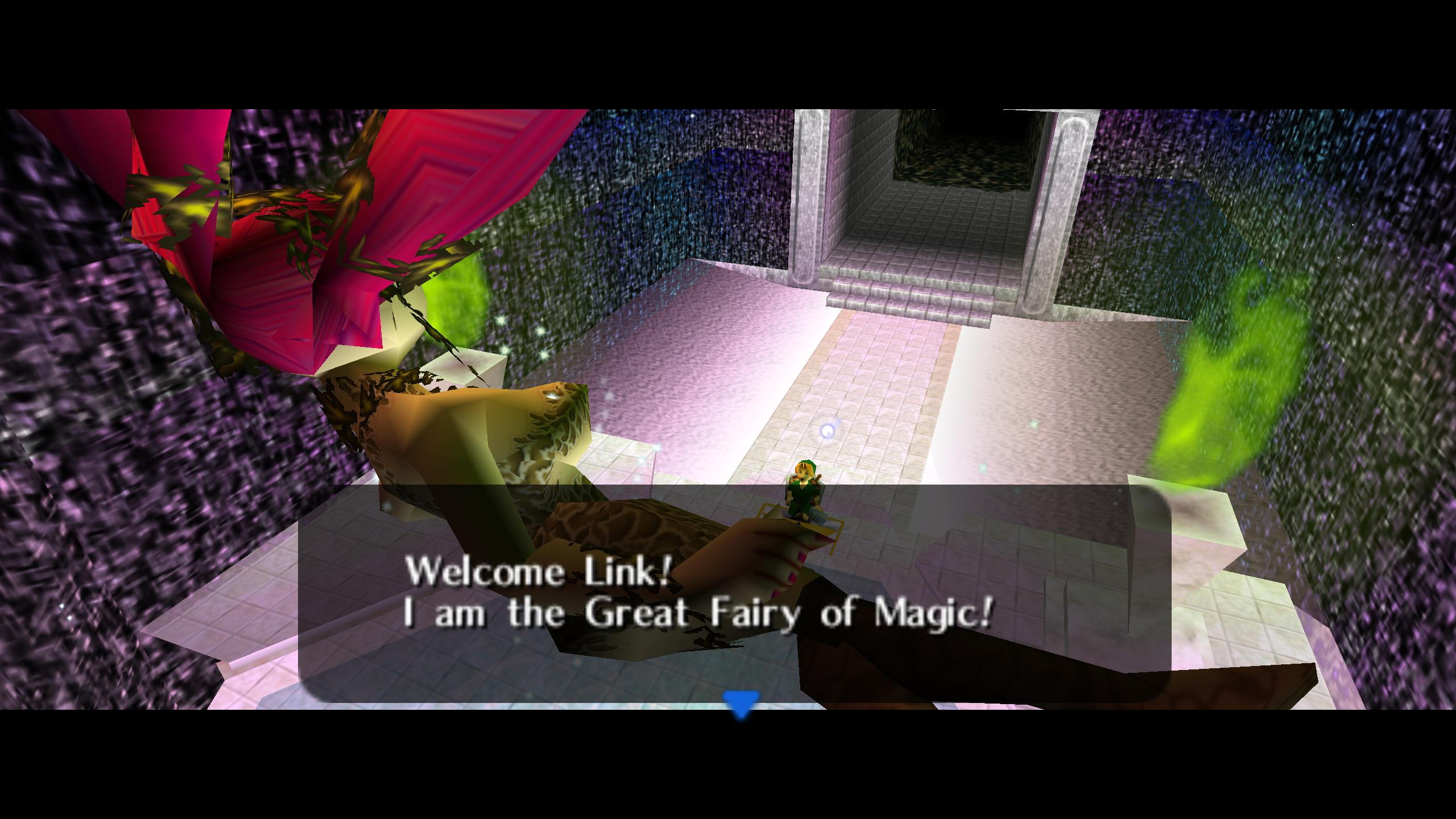 I'm not even gonna bother just gimme my spell, thanks. 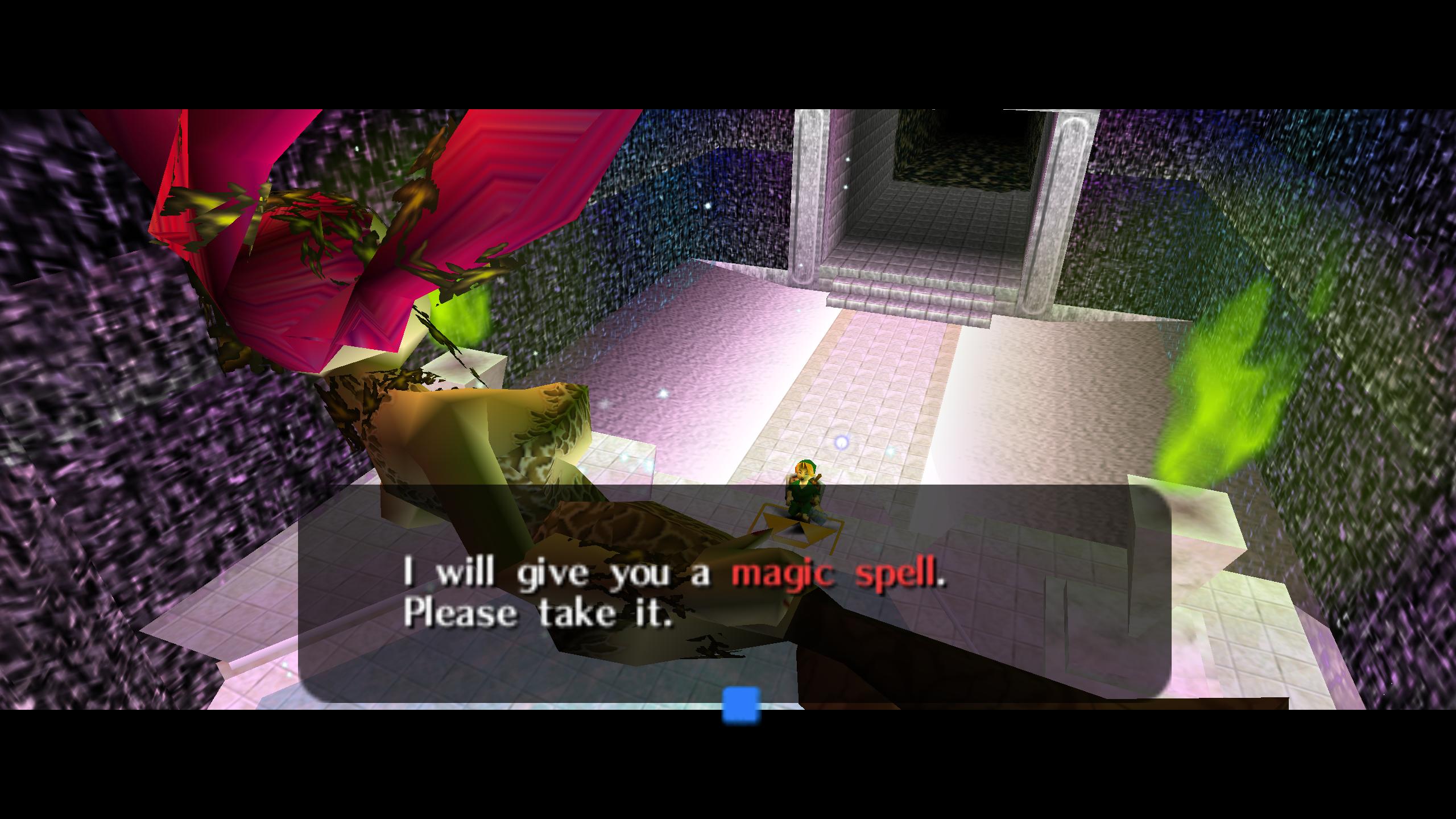 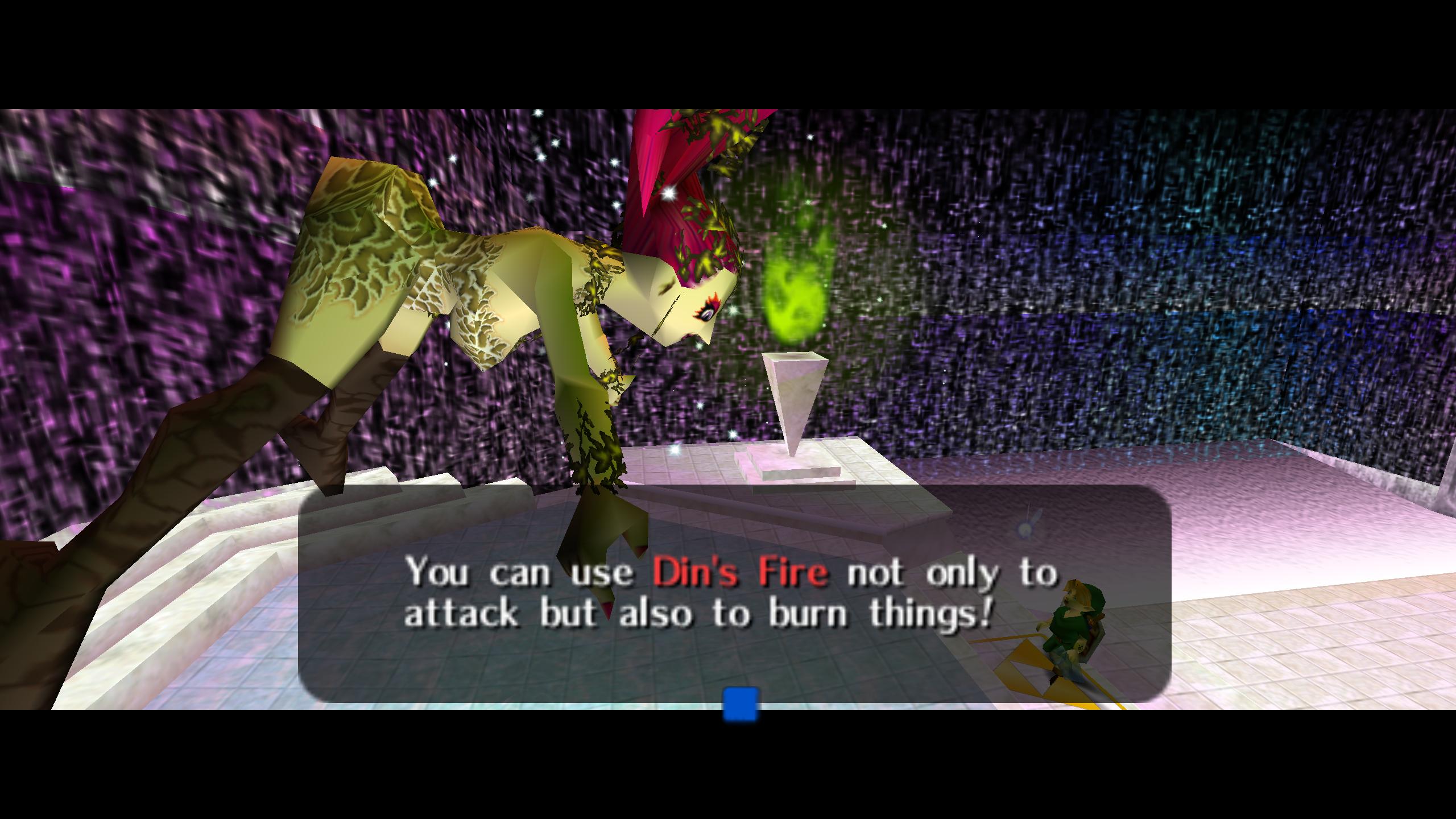 To burn things you say? I have a few things in mind. 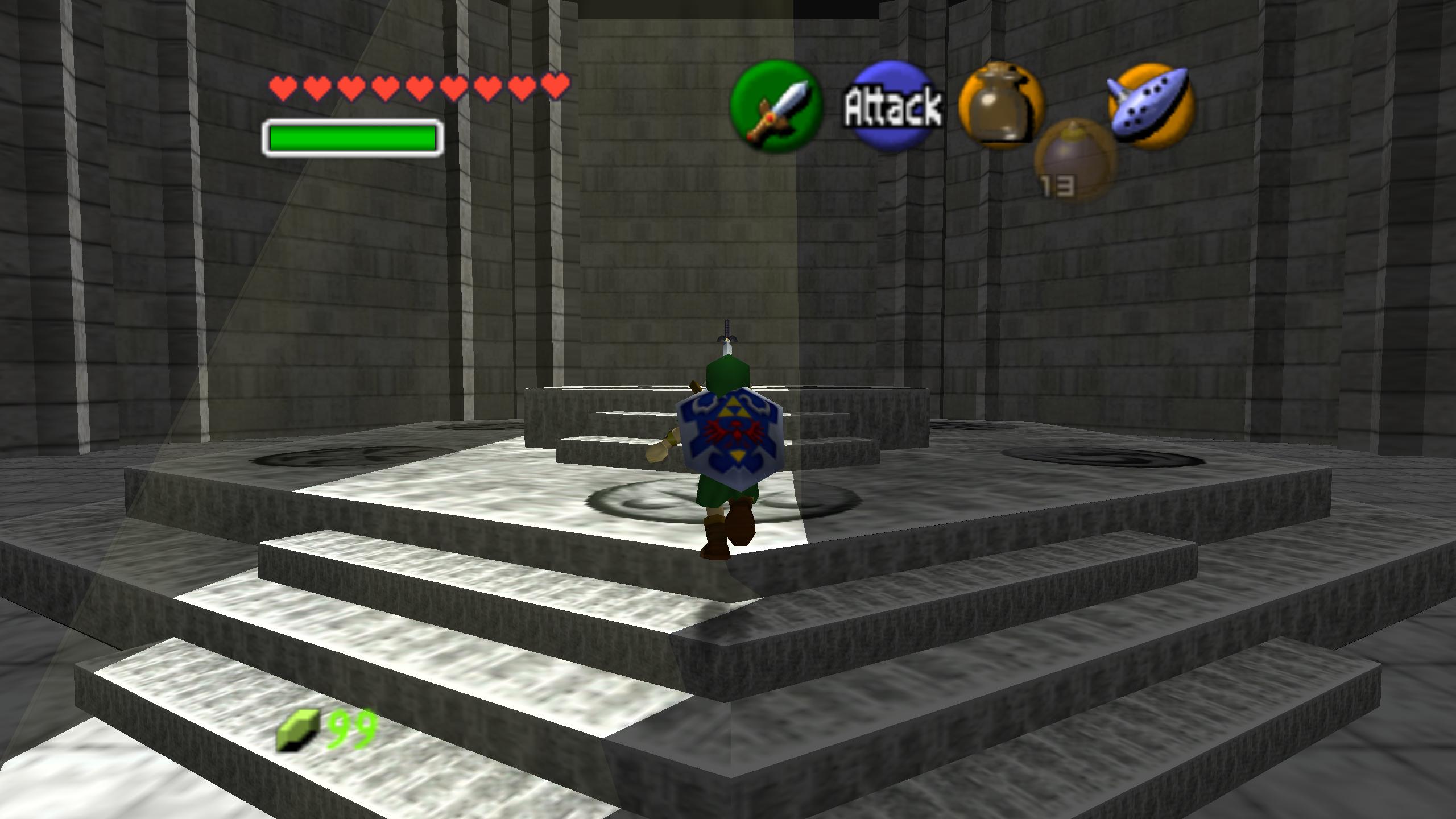 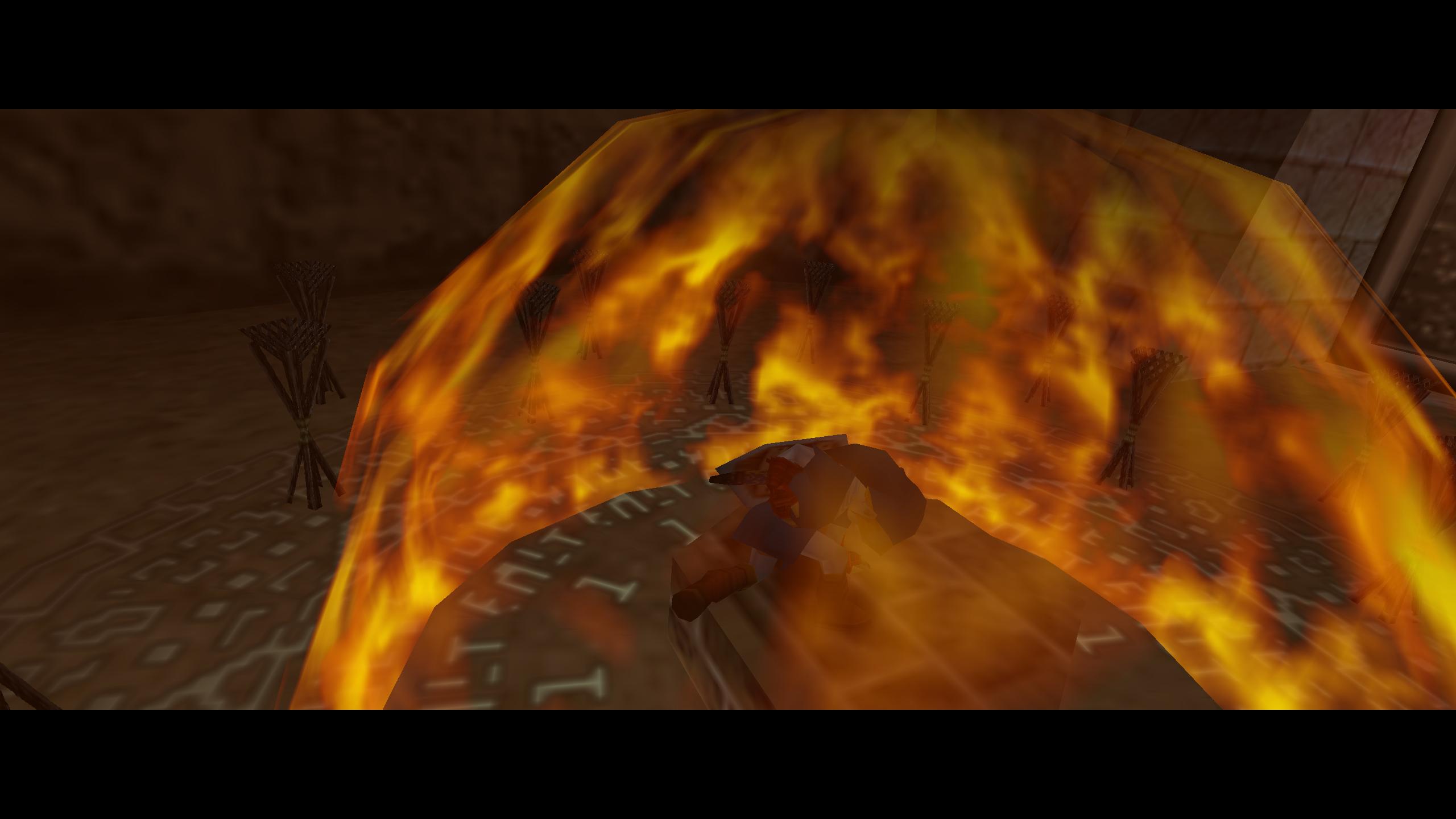 With only a slight delay we now have an entrance into the Shadow Temple! 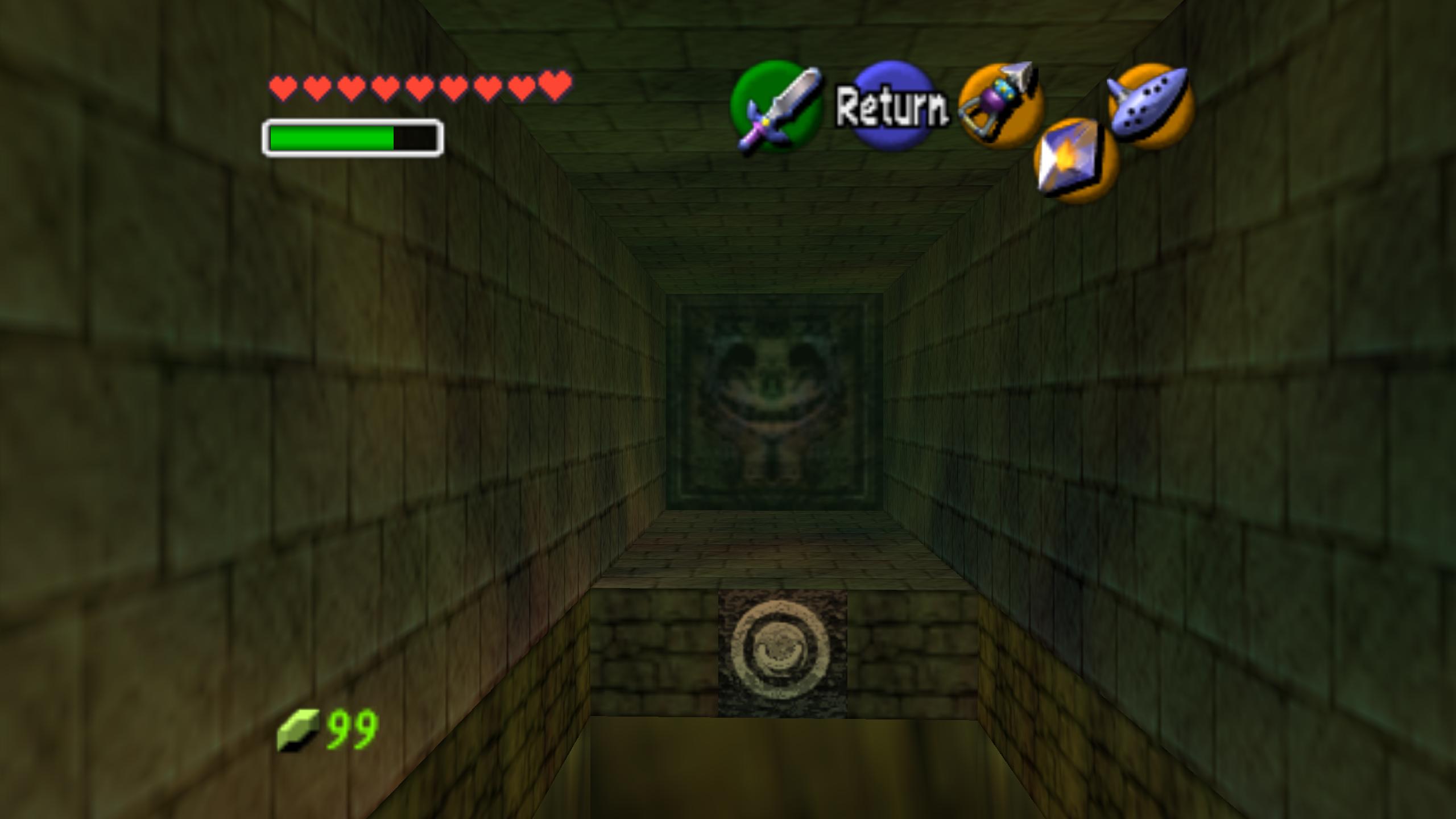 But I don't get far before the game throws its next curveball. 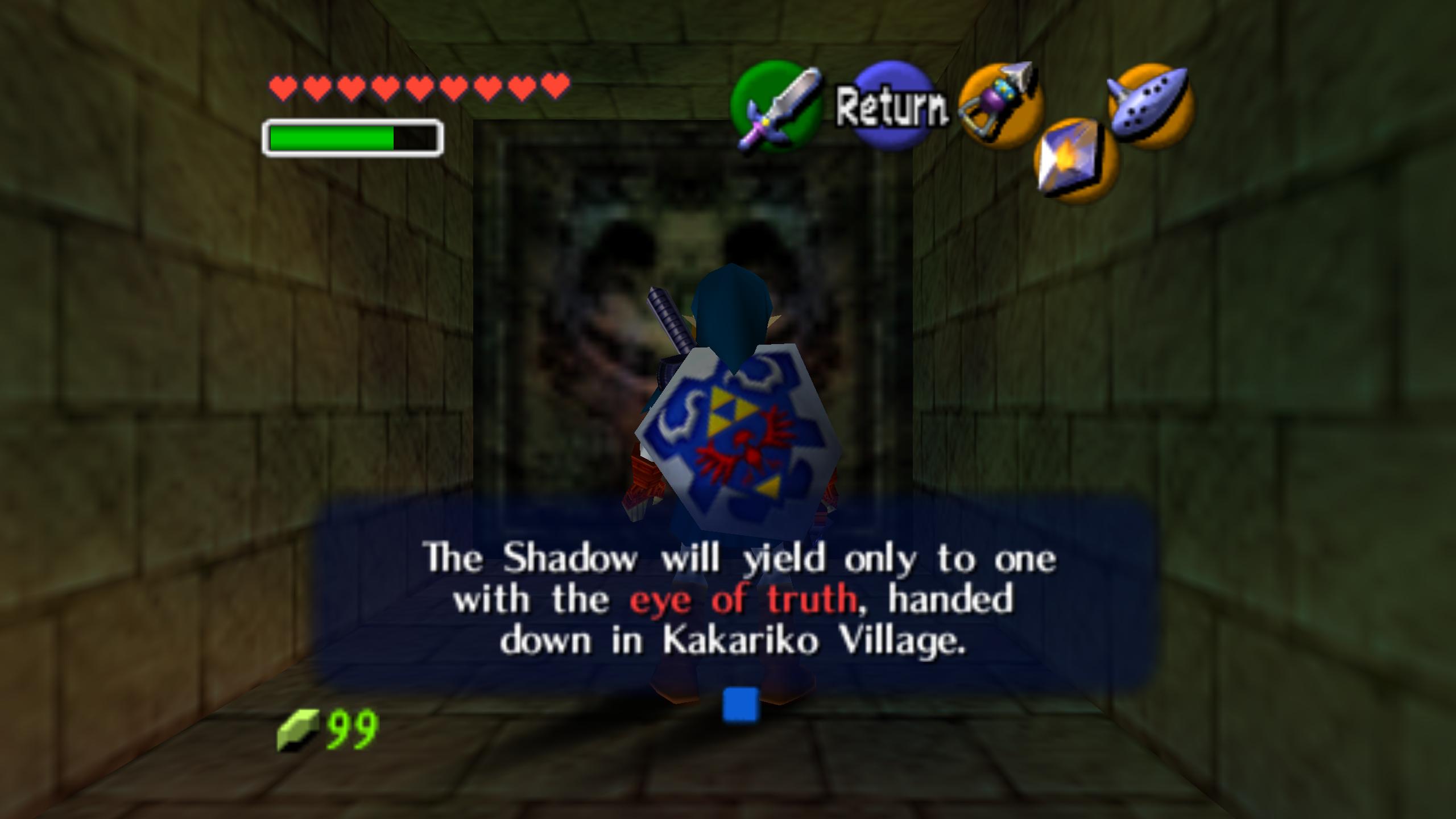 Or maybe I do because the next thing that happens is I walk straight through the door. 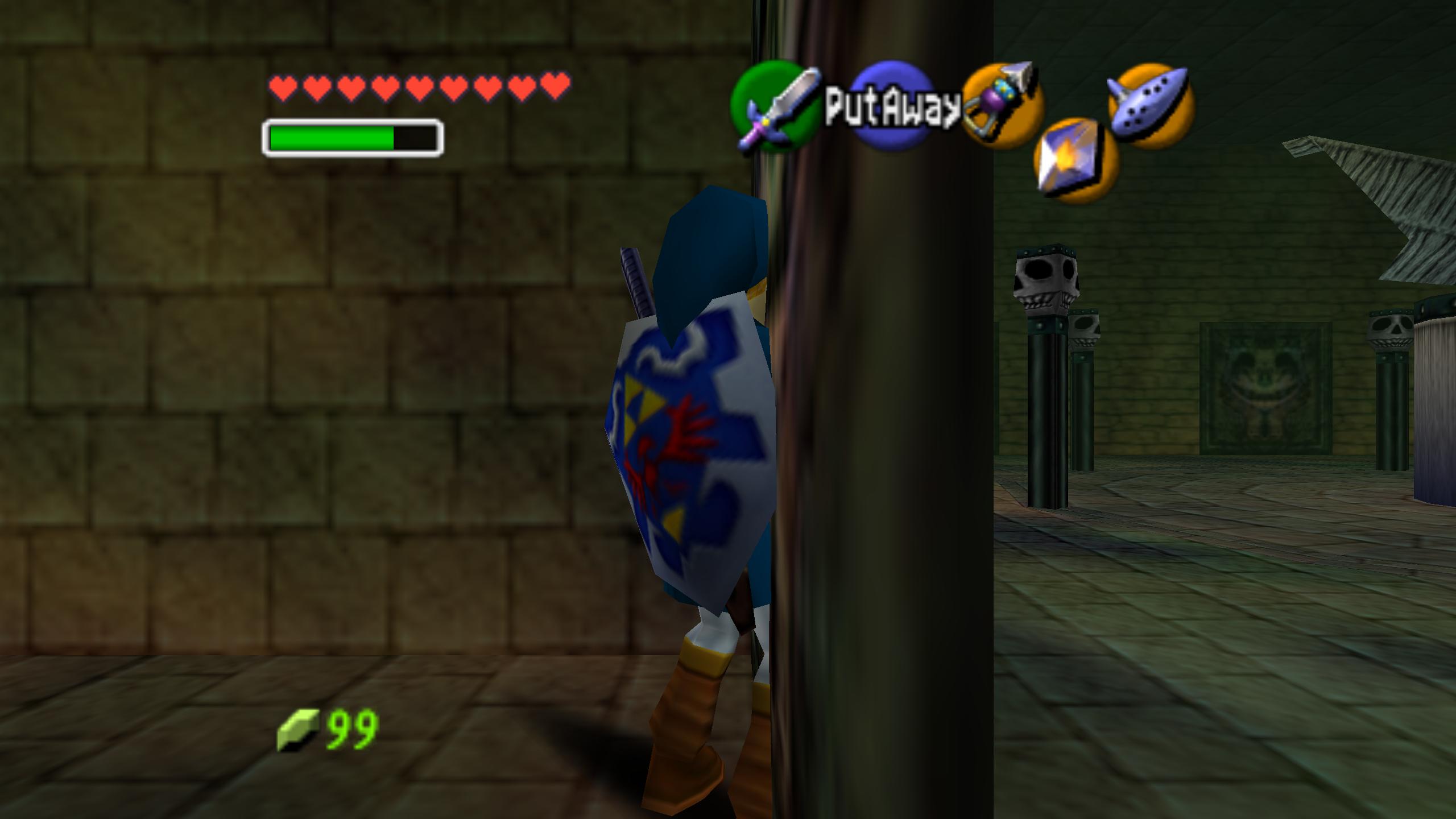 Yeah. It just doesn't have a collider. It just doesn't.
I was somewhat worried that the emulator had bugged out before I went to check that, no some of the other doors had colliders and some didn't, so I guess it's intentional... Great, good. Solid. Excited about this place already. 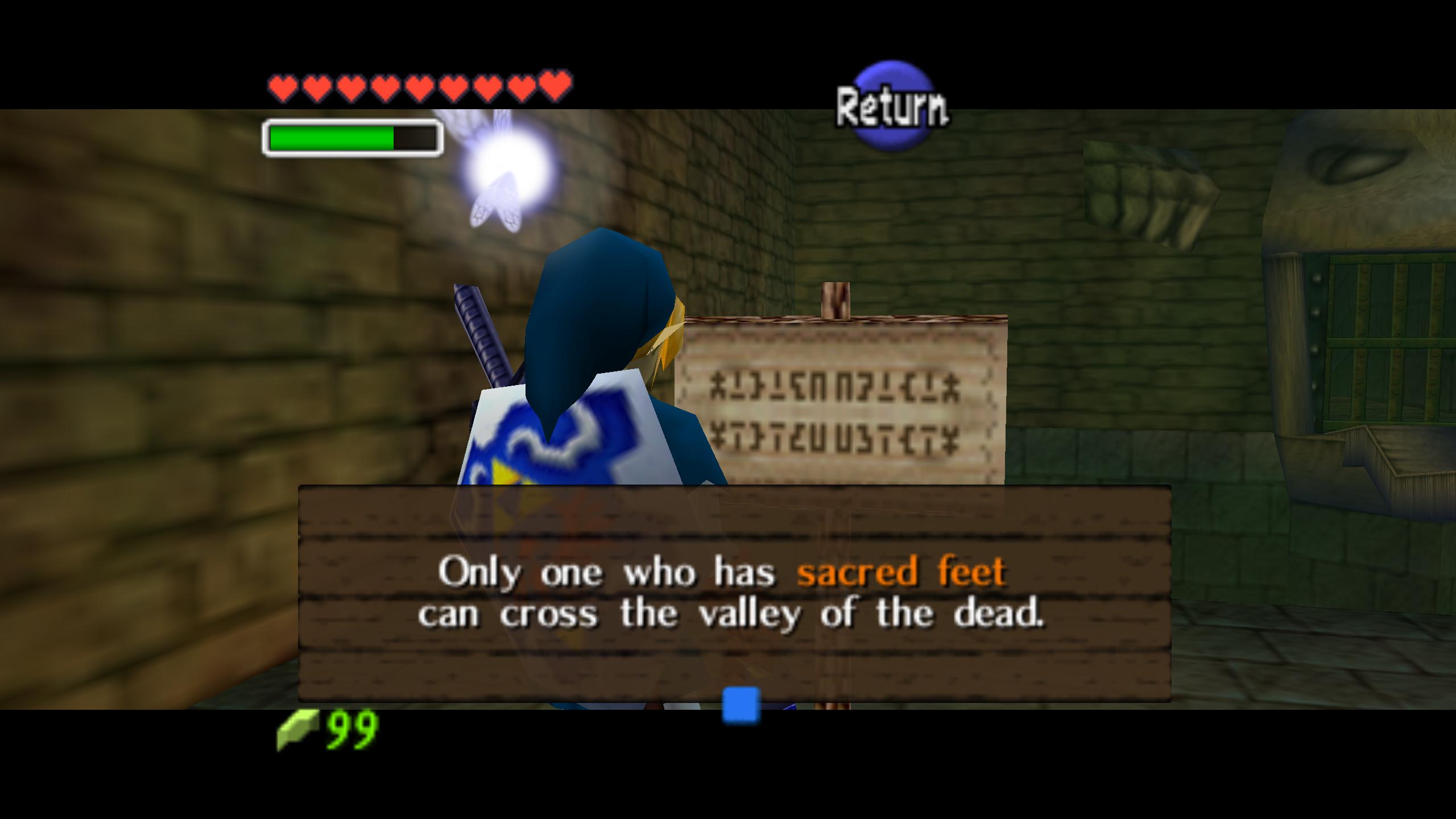 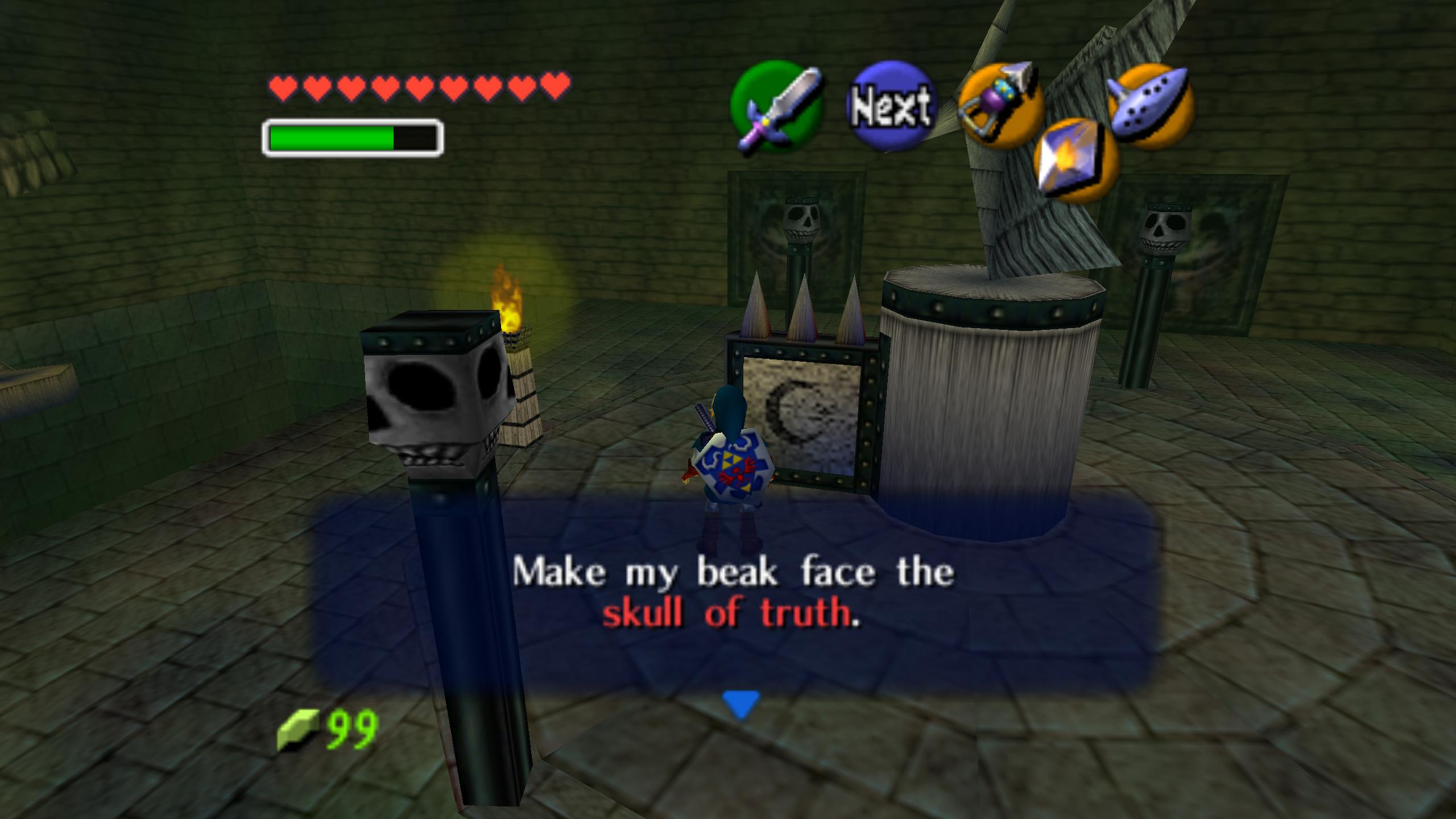 Turns out, I'm not welcome in the shadow temple. Not without the eye of truth and sacred feet. Hell of a dresscode.

All right, it said the eye was handed down in Kakariko, so I guess I should go around and ask. 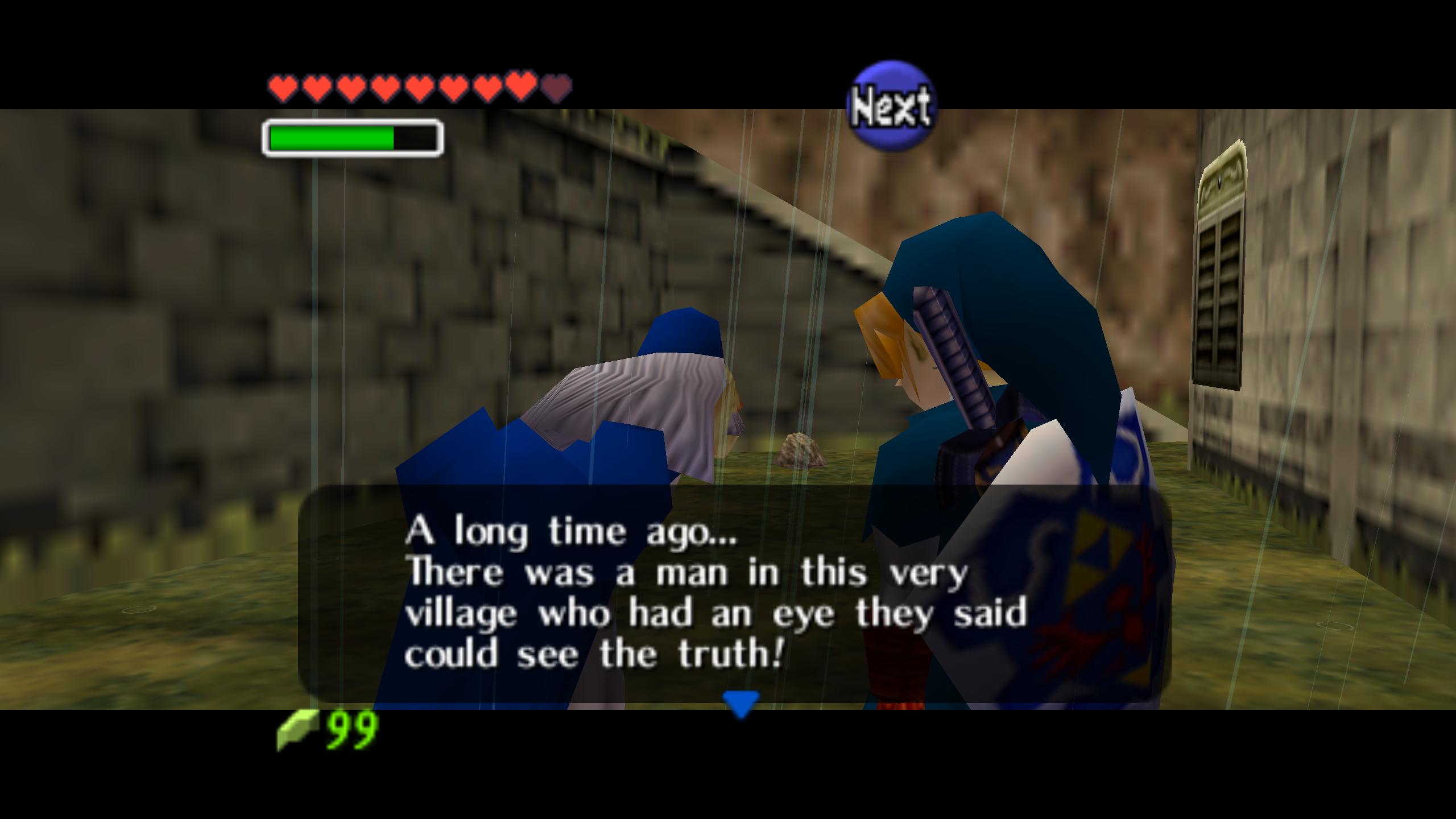 Ah, that's helpful. Where is he?

The answer: His house used to be where the well is now.

The well that I have already tried to go to the bottom of without success.

So, ok, I know I shouldn't just be looking at guides all day but this game is really hurdling cannonballs at me so I need a little help. Turns out, I am right, I DO need to go to the bottom of the well!

But wait you say, you smart reader that remember like, episode 7, you: The well was filled with water back then!

Yes, But Naturally you need to learn a song to play in the windmill to speed it up so the water drains!

Ok. Maybe I was supposed to have found these things while playing, but I don't know how it's supposed to make sense now. Let's go through it a little slower:

There's this boy in the windmill, who's real angry about something an "Ocarina Kid" did seven years ago. If you, as an adult, take out your Ocarina (another of Link's bright moments!) he's all like, "you've got an ocarina!? Here, learn this song I hate!"

Which, all right, friend. Whatever you're into.

THEN, back to Temple of Time, back to Kid Land, BACK TO the windmill, PLAY THE SONG, and the windmill speeds up! 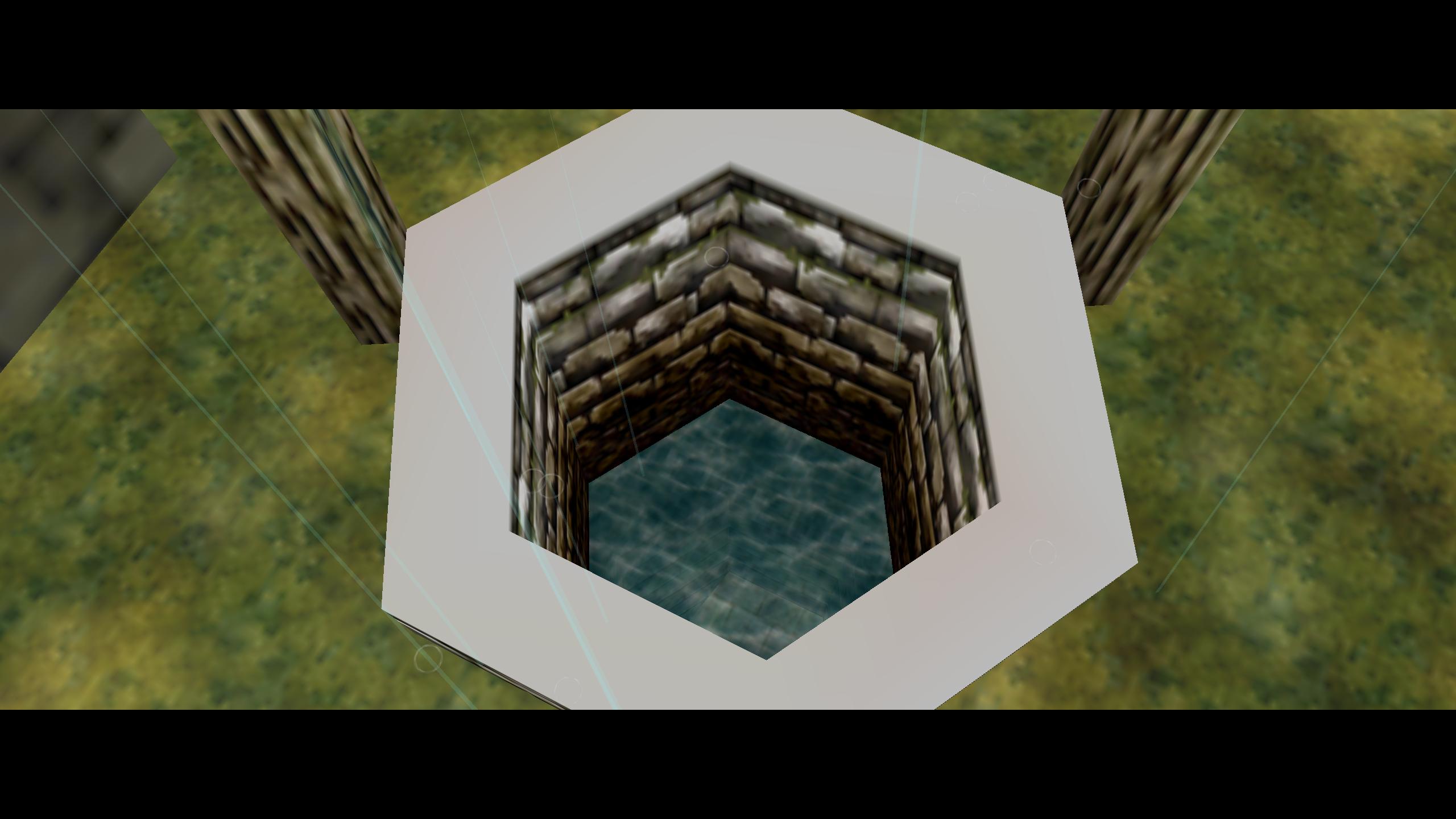 I.. guess I don't know how windmills work!

(Ok, one thing though, it does explain why he's angry in the future, because the windmill's been spinning fast for seven years, which is a neat touch. Fair enough game.)

Well, now we'll enter a Te--bottom of a well! 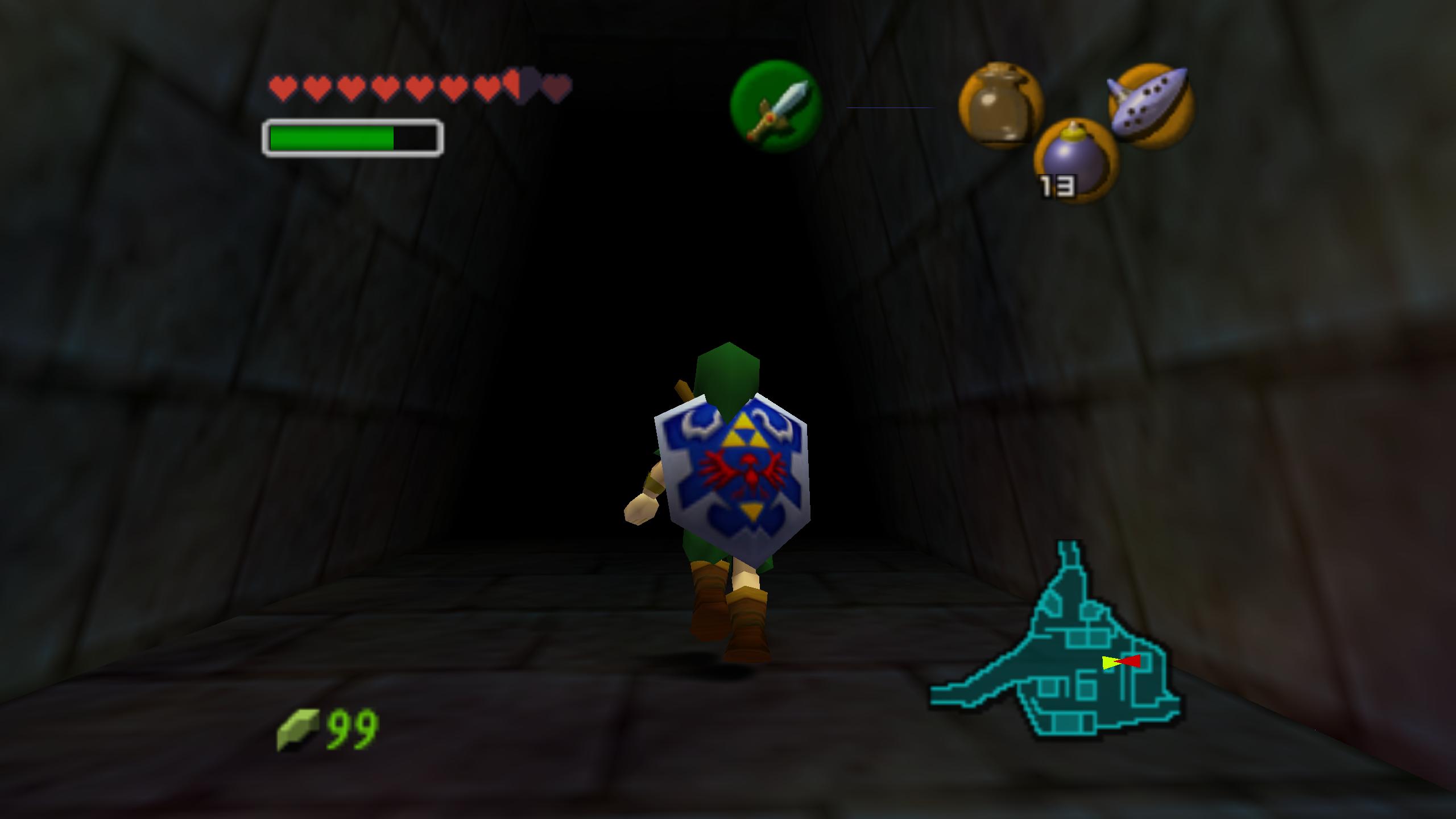 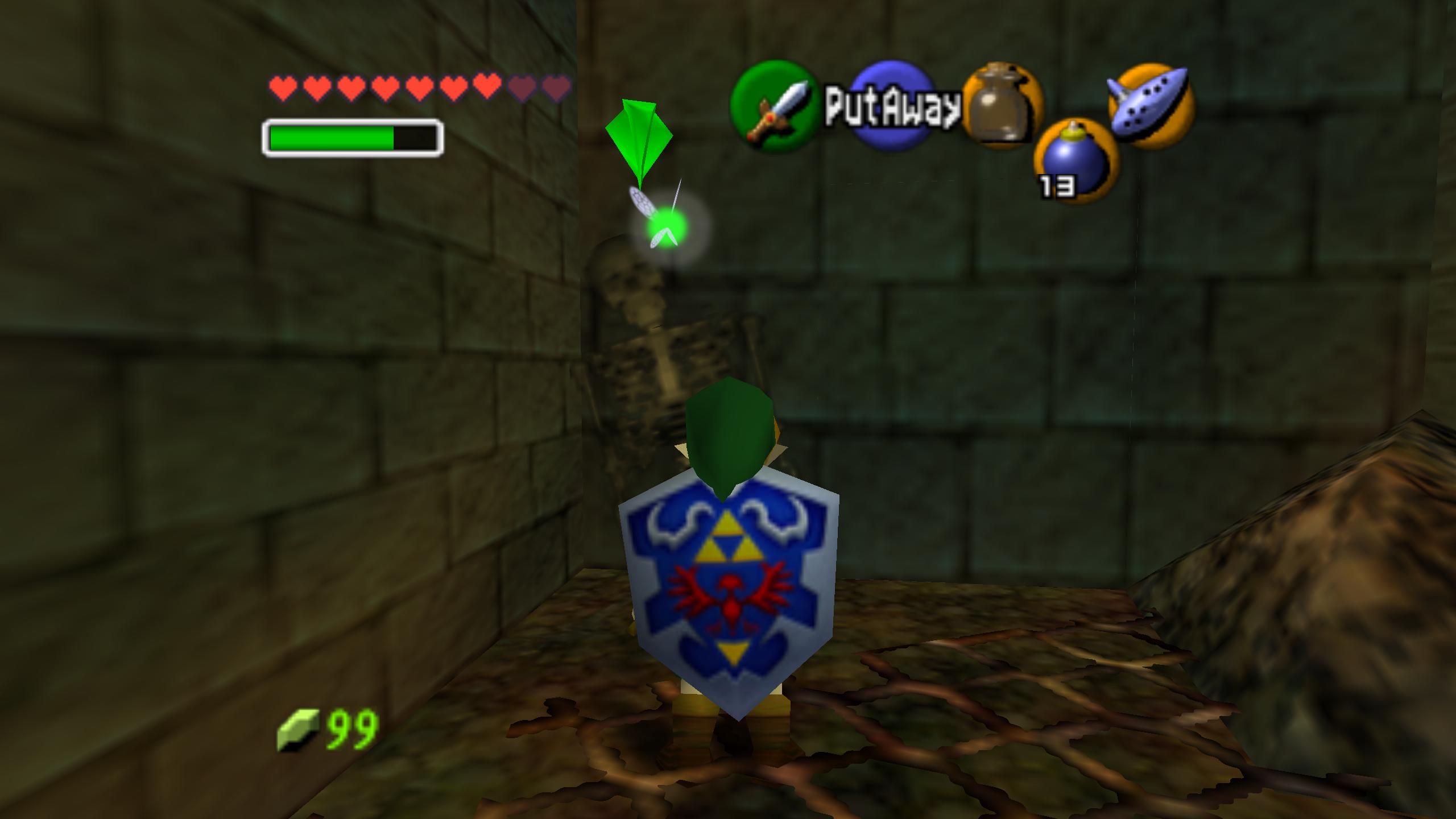 I stared for a while at this skeleton because Na'vi kept flying over it and going green, which usually means something, but he wasn't interactable.

The wall wasn't a wall.

Yeah, also this place has fake walls. I guess it was meant as a bit of a teaser for the Shadow Temple? But I did it in reverse order! Because that's how I roll. 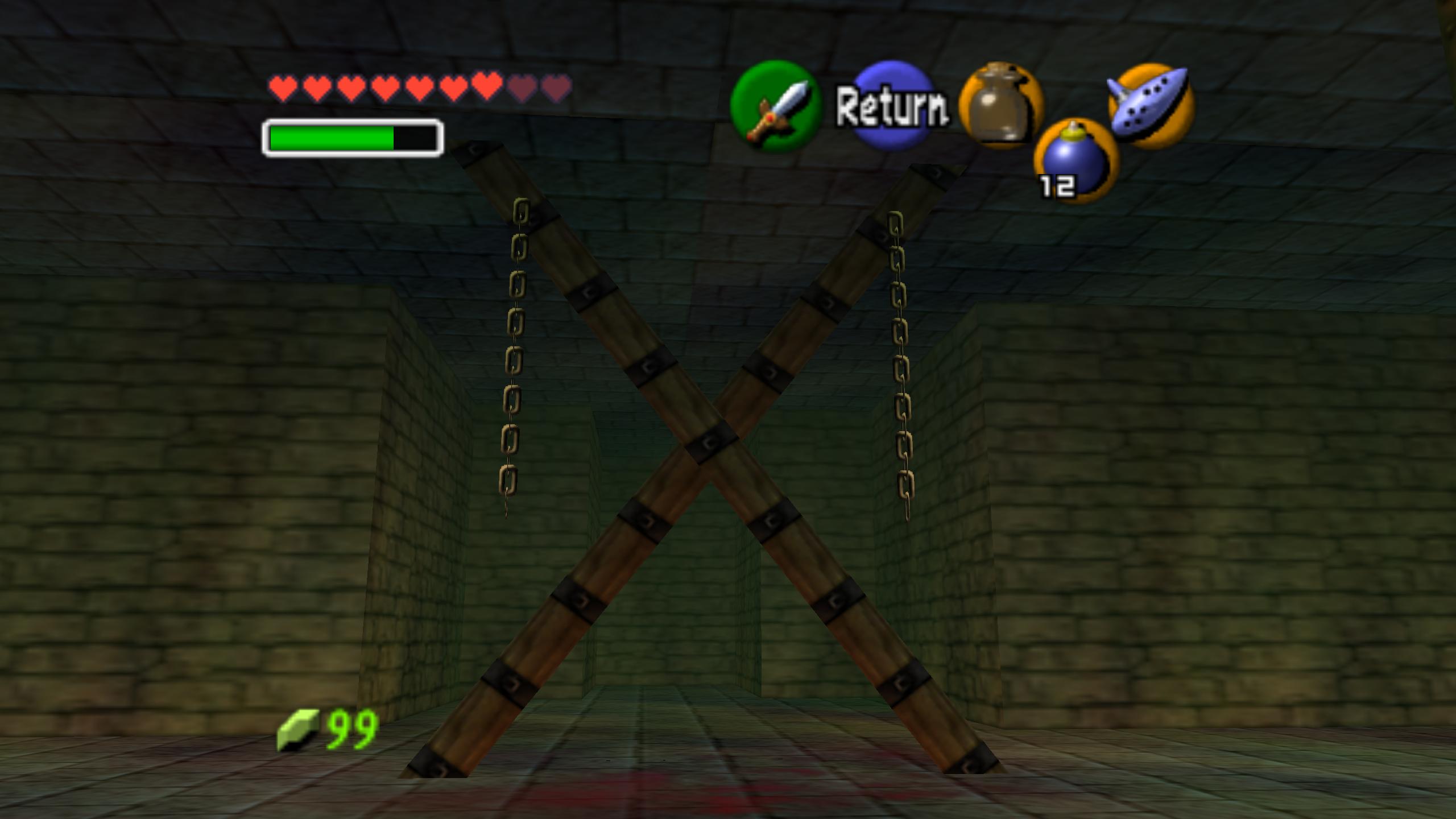 I know this game's gotten darker over the past bit, but... flaying? Ouch.

(Ok, that cross is actually too big to flay anyone really, unless they're giant, but still... grim. And there's blood everywhere.)

There's a big bat and some more fake walls and a chest that I see but when I walk to it, the floor is fake and I fall down to a basement area (already lovin' it), where there are those zombie-things you can freeze with the Song of the Sun (I'm playing a lot of songs this episode, also teleported around between Kakariko and Temple of Time)

The basement has some dead ends and one that has a dungeon map in it, and that's about it.

So I go back up again.

And I decided to call there because I was massively flustered and just a little confused. And I think that's a decent time to call break! Let's hope we find something in this bottom of this well! Next time!