We're back! This is episode 5, if you want to catch up, all the other parts are here

Aww, look at those chickens. 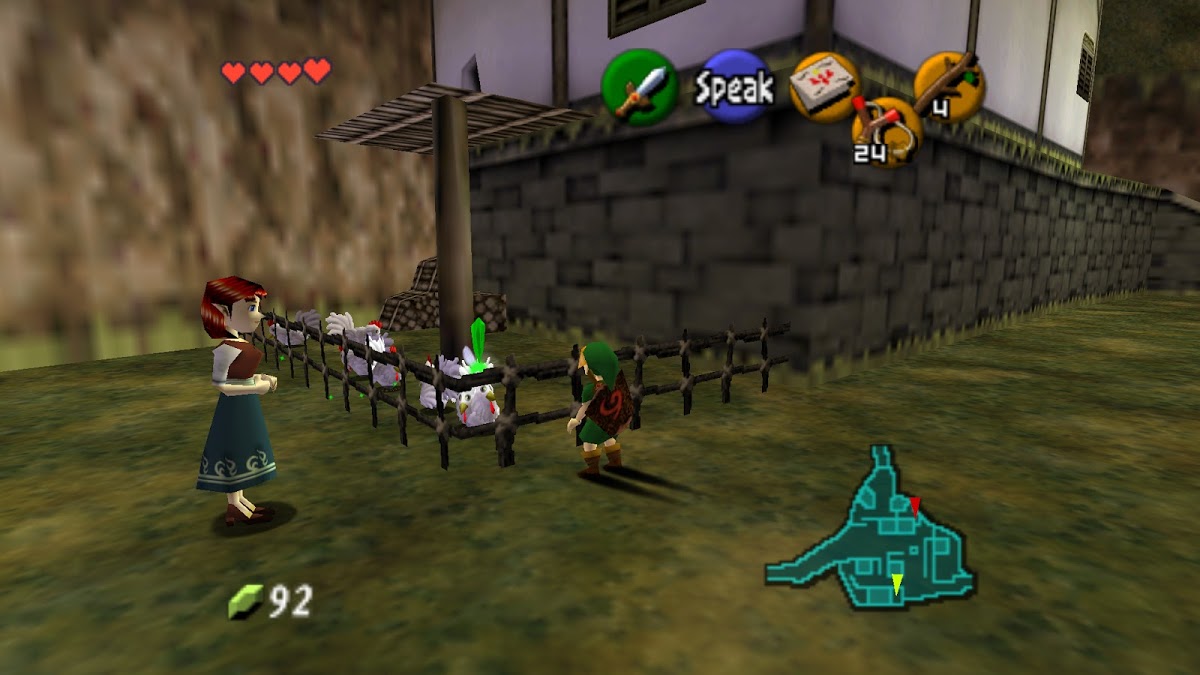 All nice in their pen. Now stay there dammit!

Now, it's back up to that guard who laughed at me and bring in the big guns: Zelda's letter. 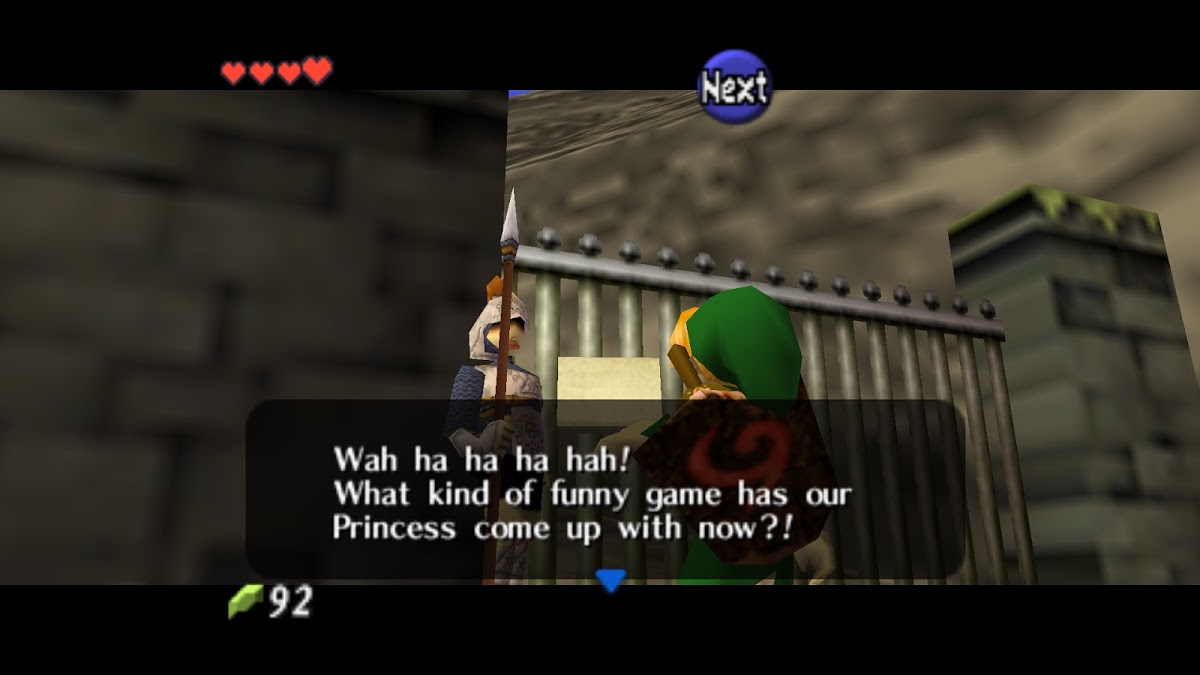 It's called Ocarina of Time, this time. I know it's confusing to keep track, but i got an ocarina, see? Alrighty Wait are all these games just things Zelda came up with to give Link something to do??? 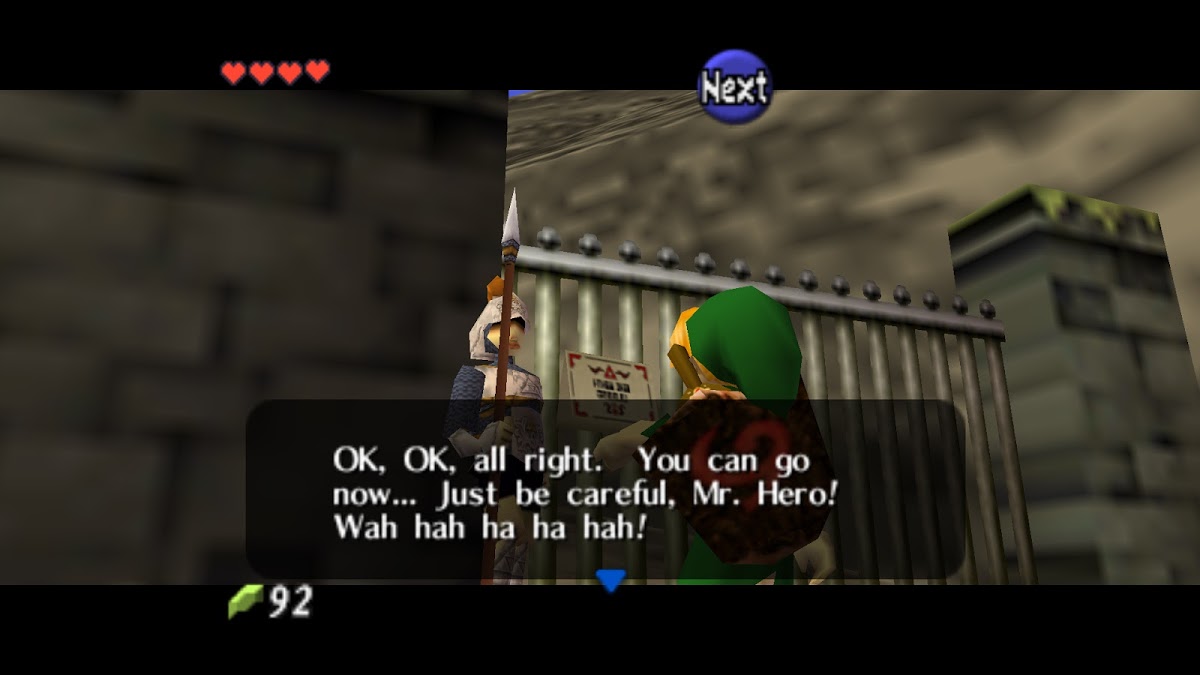 MR HERO! I KNEW IT. Alright, world, time to start appreciating me for what I am.

And then he opens the gate up to Death Mountain, but has a few more parting words: First he warns me that I should probably get a better shield when going up there because my measly little wooden plank isn't gonna do much on "Death Mountain".
And then he asks me if I could buy a mask for him back in town for his son, because he really wants one and the guard can't exactly leave his post.
Dammit game, don't make me feel bad for the guards, now. They got me doing fetch quests now AND you're making me feel bad about not doing them?? :/

So the first thing I do is promptly ignore his advice and stroll up the mountain trail. 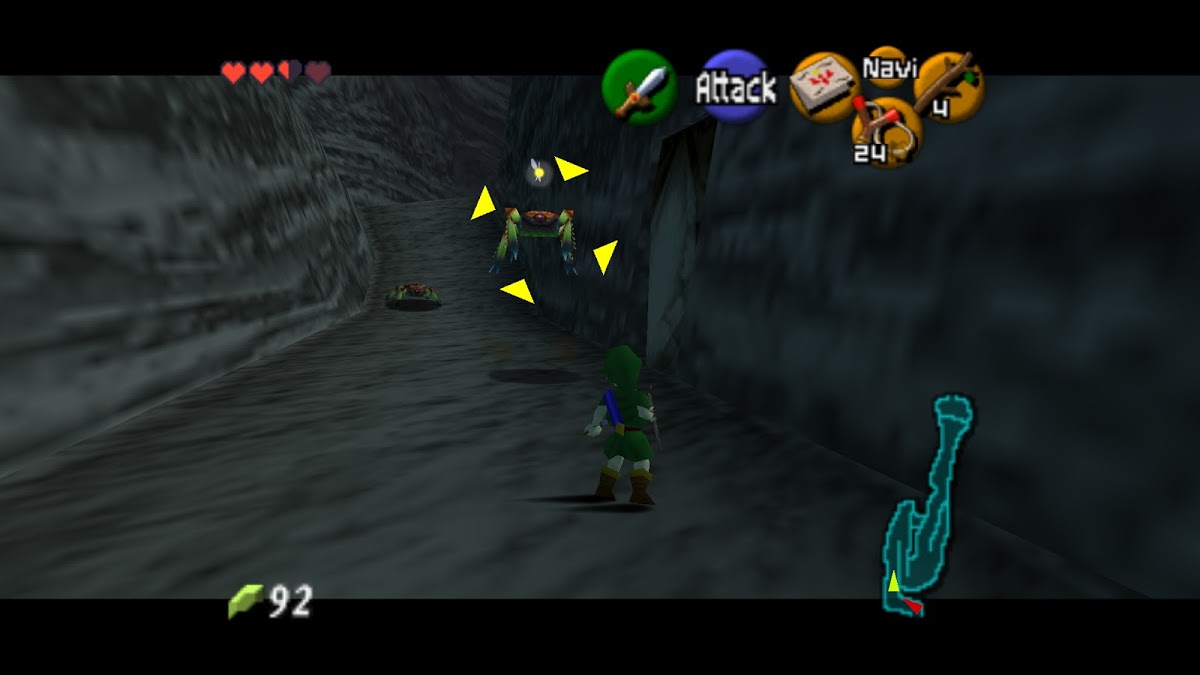 It turns to night quickly.

Where I meet these jumping lil' fuckers, who aren't all too kind but take two hits with my sword, if I can ever actually hit them.

But eventually i make it up the first trail and see two rocks, one large one and a smaller one. Next to them is a sign that says this is the entrance to Dodongo's Cavern, and that I shouldn't enter. And then the other rock moves!! I ready my sword but before I swing it I accidentally hit the contextual key and speak with them instead--
Oh. 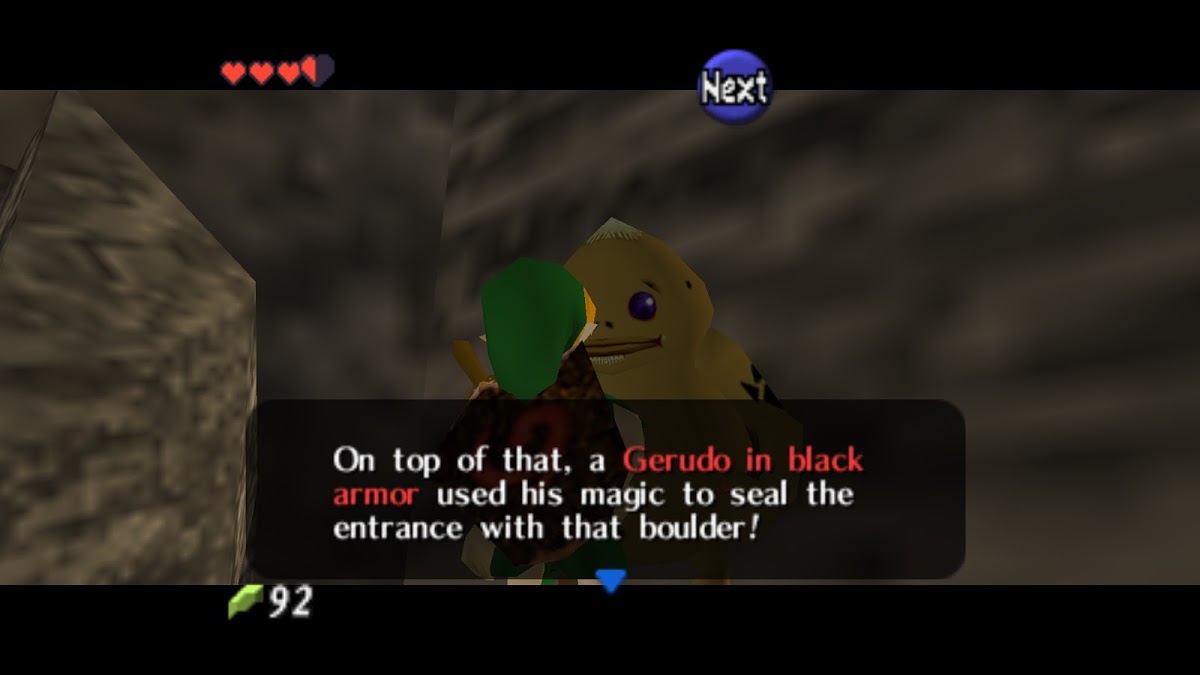 Oh no! Not the Gerudo in Black Armor?!

Turns out it's a "Goron", of the "Gorons", the stone-eating people of Death Mountain (naturally), who complains that this cavern has been sealed in by a "Gerudo in Black Armor" in Important Red Zelda fontTM, just if we were in doubt that it was Ganon.
Well, can't do anything 'bout that, so I stroll higher up the mountain where I find more of these livings rocks until I find their city, "Goron City" -- I guess it's descriptive. 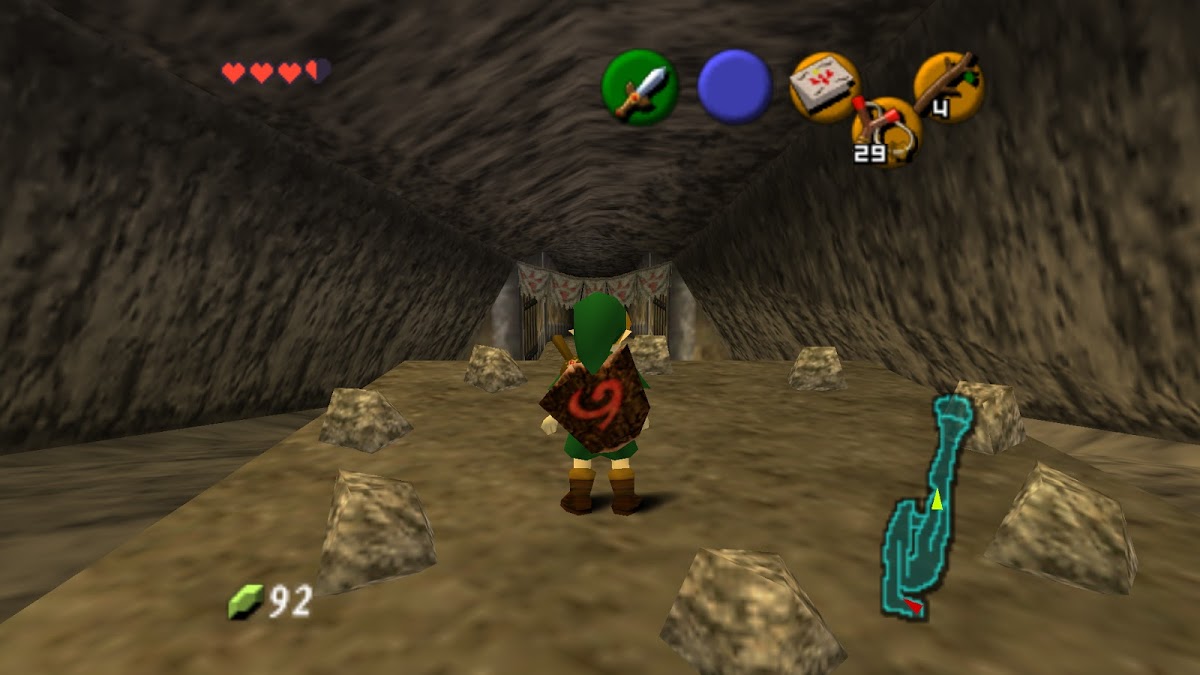 Outside is this ritual stone circle which I can only assume is being used for black stone magic? 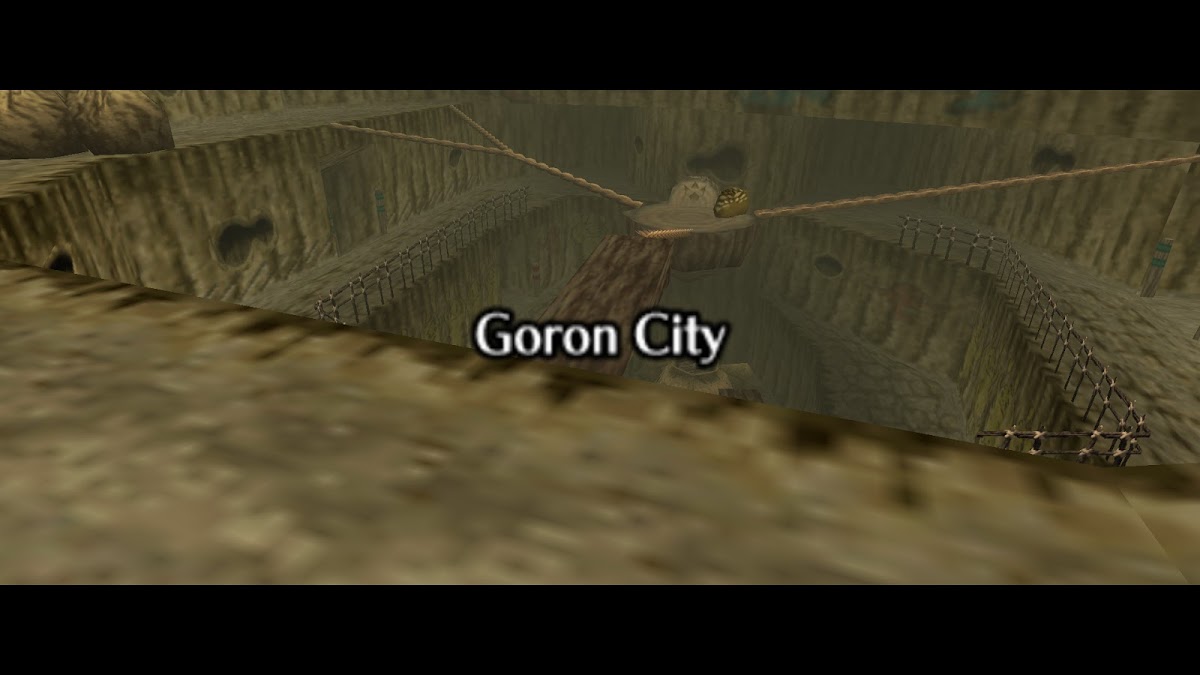 Which also reminds me that I didn't need to do that chicken quest at all in order to get up the mountain, which I guess I realized already, but I assumed it was necessary to do because I had heard about it before--and people wouldn't complain about an optional quest, right? ....Right?
..? Crap.


Straight inside Goron City is another living stone guy who cries out that he's hungry and that there's a food shortage in the city. But wait, they eat rocks, right? Look around you.
Sure enough, he says, but the problem is they only eat the rocks INSIDE Dodongo's Cavern, and that has been filled with dangerous creatures, and well, sealed off. 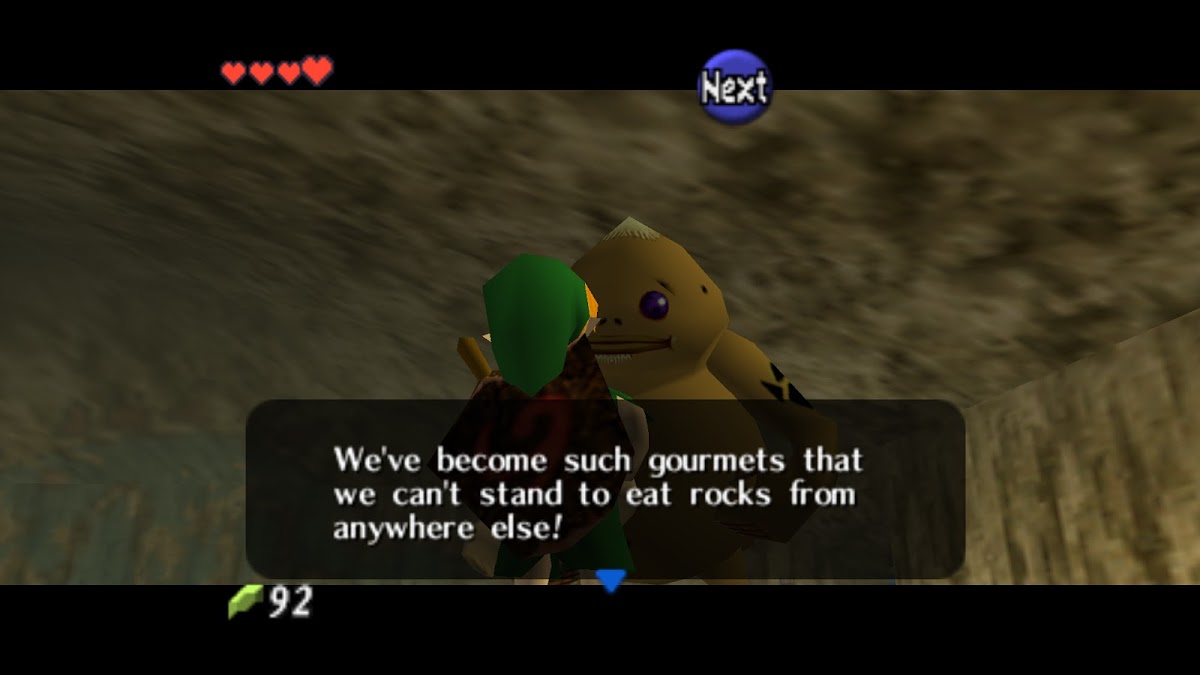 ...Kinda seems like you caused this problem yourself. Maybe you should expand your diet instead of wait for The Hero of HyruleTM to come save you. Doesn't seem that reliable of a plan. What were they gonna do if Link rather wanted to go skating? Or if Zelda's game hadn't taken me up here?

But no matter, I continue around the city and ask around for the Spiritual Fire Stone, which is the only thing I, The Hero of HyruleTM, care about. (Literally, it's the only thing Link asks about).

Turns out, "Big Brother", the king of this place, has locked himself up in his room with it, and guess who he's waiting for? 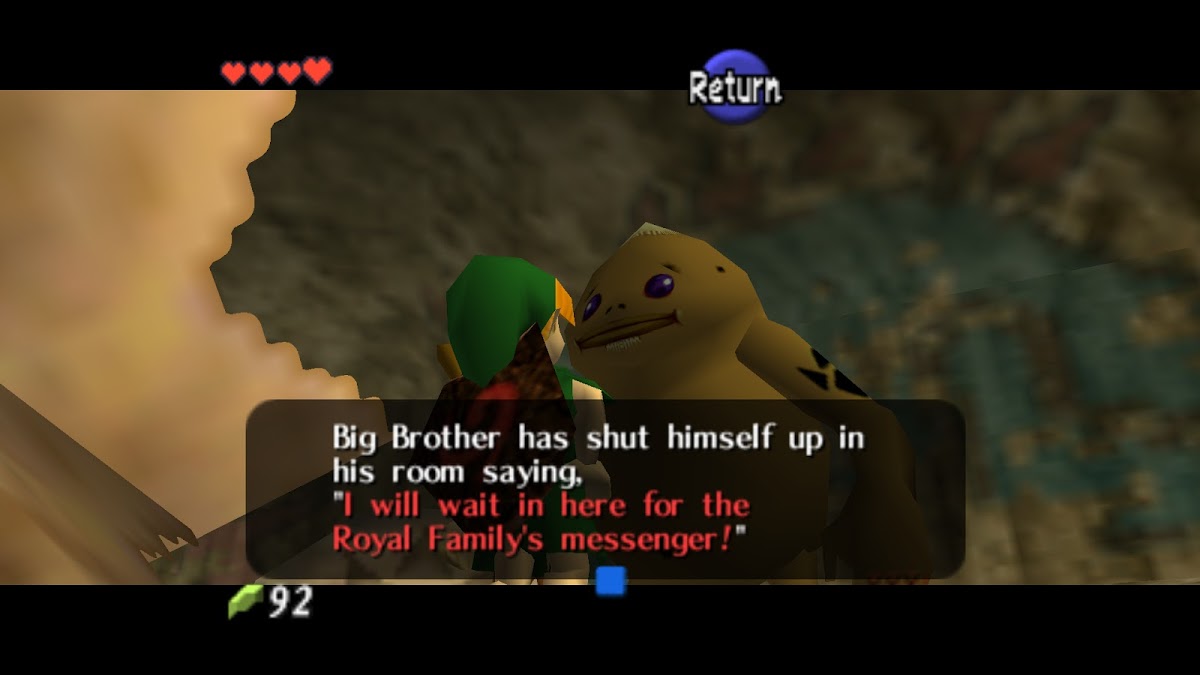 I explore around a bit more and find these strange looking flowers I can't pick up and some more people who are starving, and tightrope my way across the top of the city (which is pretty neat), and I find the door I assume I need to open but I can't interact with it in any way, and the guy next to me just says it's sealed shut, so I walk a bit around, and look at those flowers one more time. 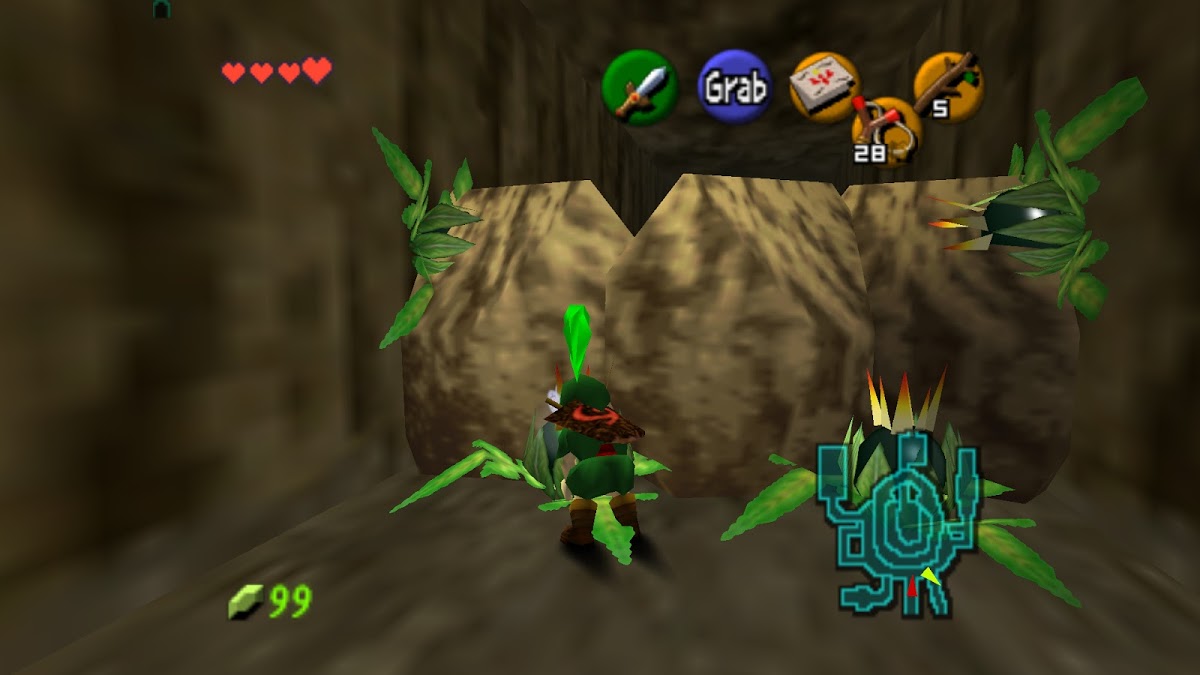 One dude tells me they're "Bomb Flowers" that only grow up here, so I guess I have to use them for something, but I still can't pick them up. So I try rolling (yes, I learn), I try flinging seeds at them, I try hitting with a sword and with a stick but nothing budges, so I go to the extreme measures of misclicking: 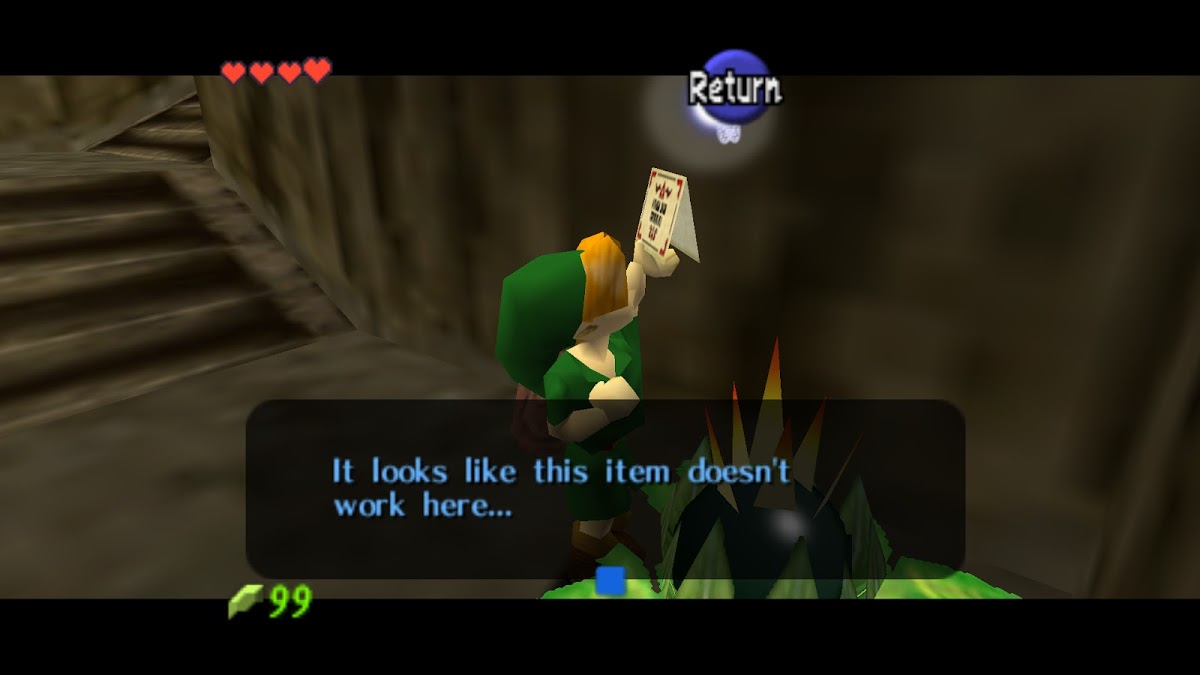 Well, Link, you can't just go around swinging Zelda's Letter at EVERYTHING and expects it solves the problem.

But that gives me an idea! Back to the door! 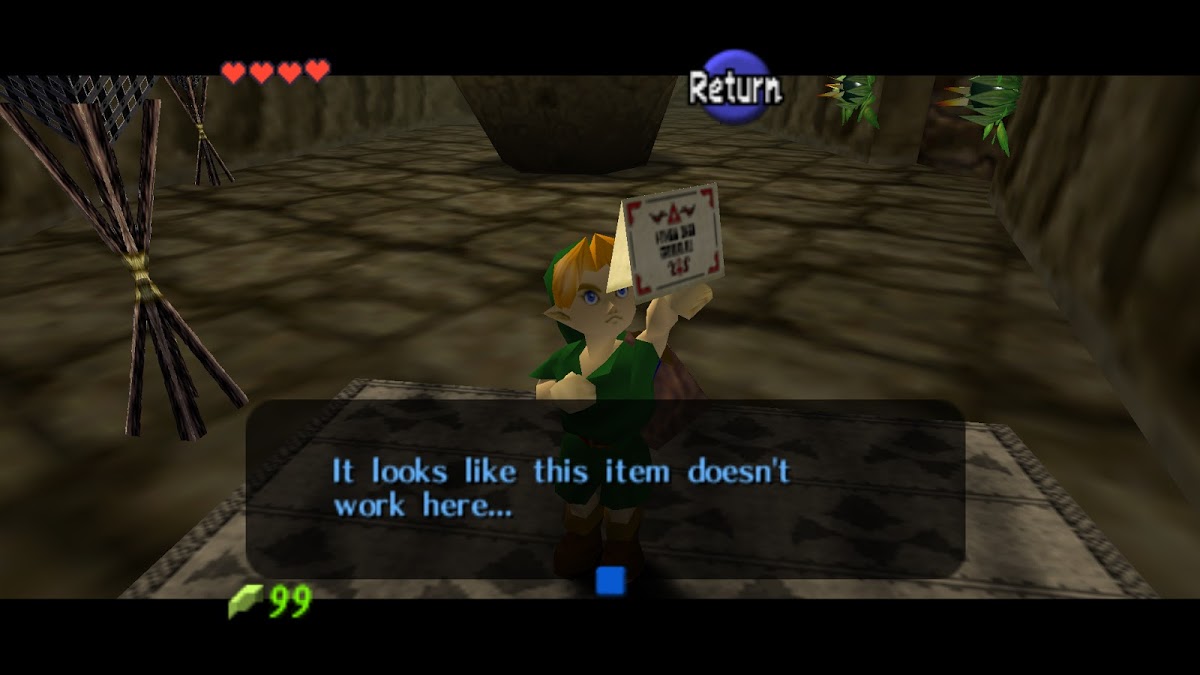 Nope. I guess the door isn't sentient either. It's a rock. Non-edible rock.

Oh, well I have other ways of showing my allegiance to the princess, don't I? So after some inventory fumbling I pull out my Ocarina, and begin to play, first wrong, then right: 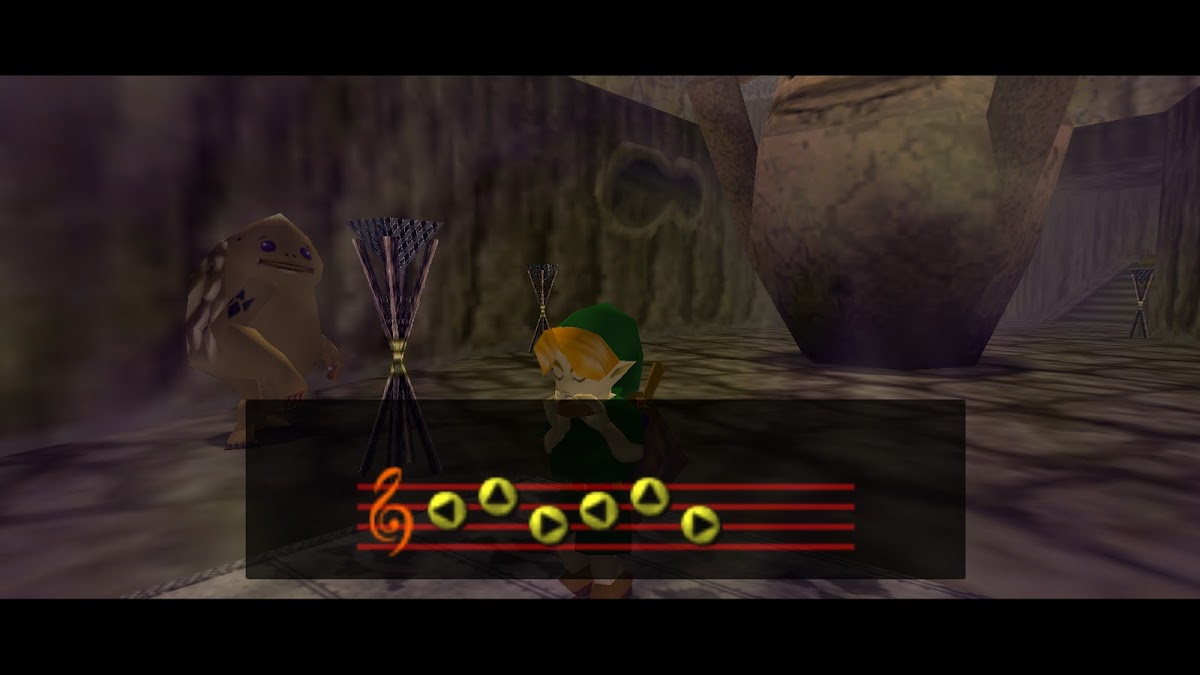 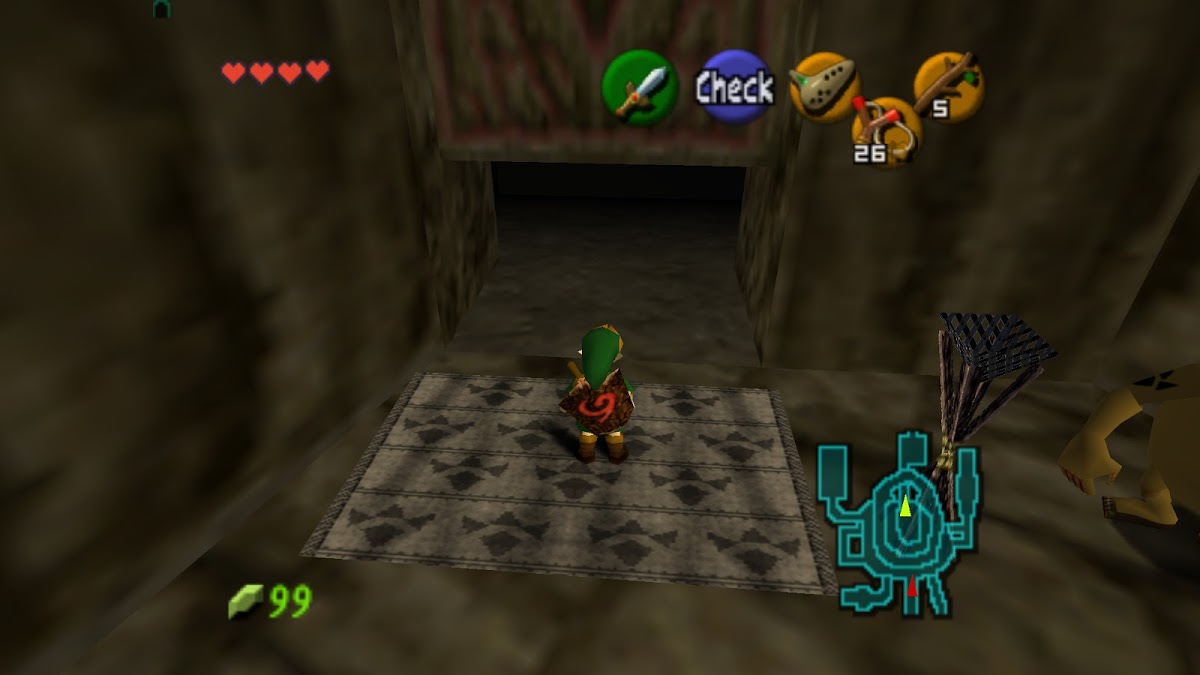 It seems a of an unsafe secret message though -- like anyone can learn a melody, right? That guy is RIGHT NEXT TO ME, must have heard it, and it's not so complicated that you can't memorize it from a single listen--soo, what's stopping him from just strolling around the kingdom, pretending to be part of the Royal Family? (what's stopping me???)

But I'll stop here with a teaser for the Biggest of Brothers, coming up next week, where I'll be trying some Rock Dance Therapy.* I think. It's gonna be a good'un! 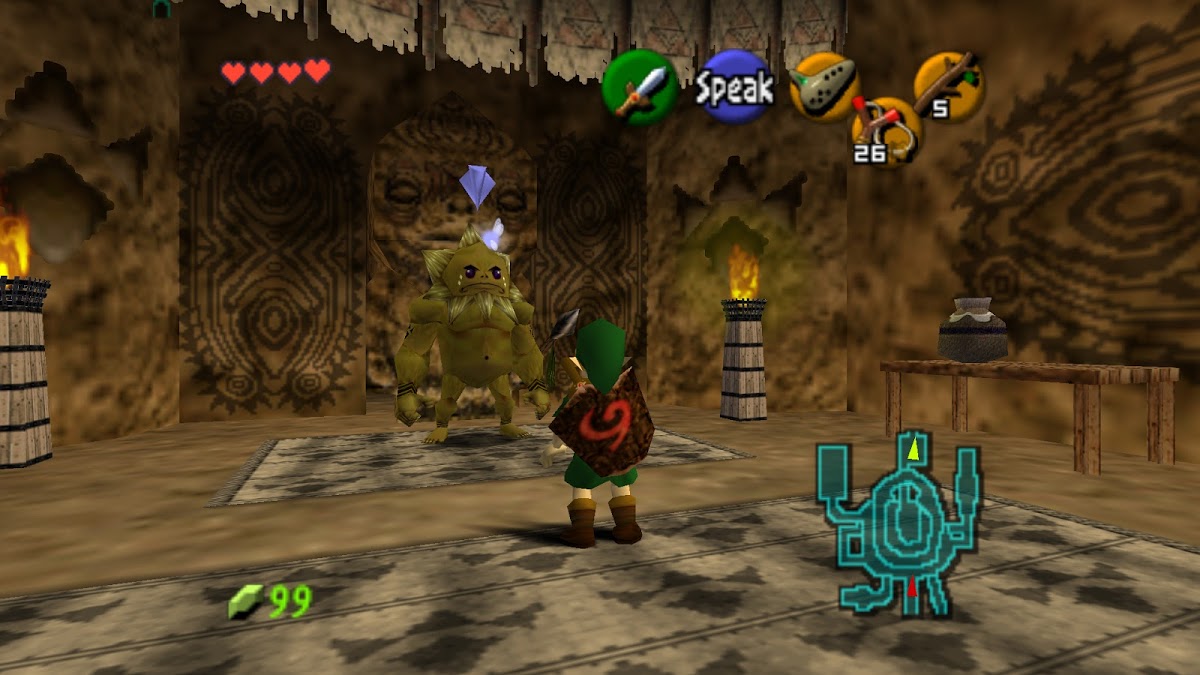 *(I played a bit ahead, but this is long enough, and it'll be in the next one, don't worry. You won't miss a second of this exciting adventure!)