Time to talk with Big Brother.

He isn't too happy to see me. Once again, he just thinks I'm some kid, and not the Royal Messenger. 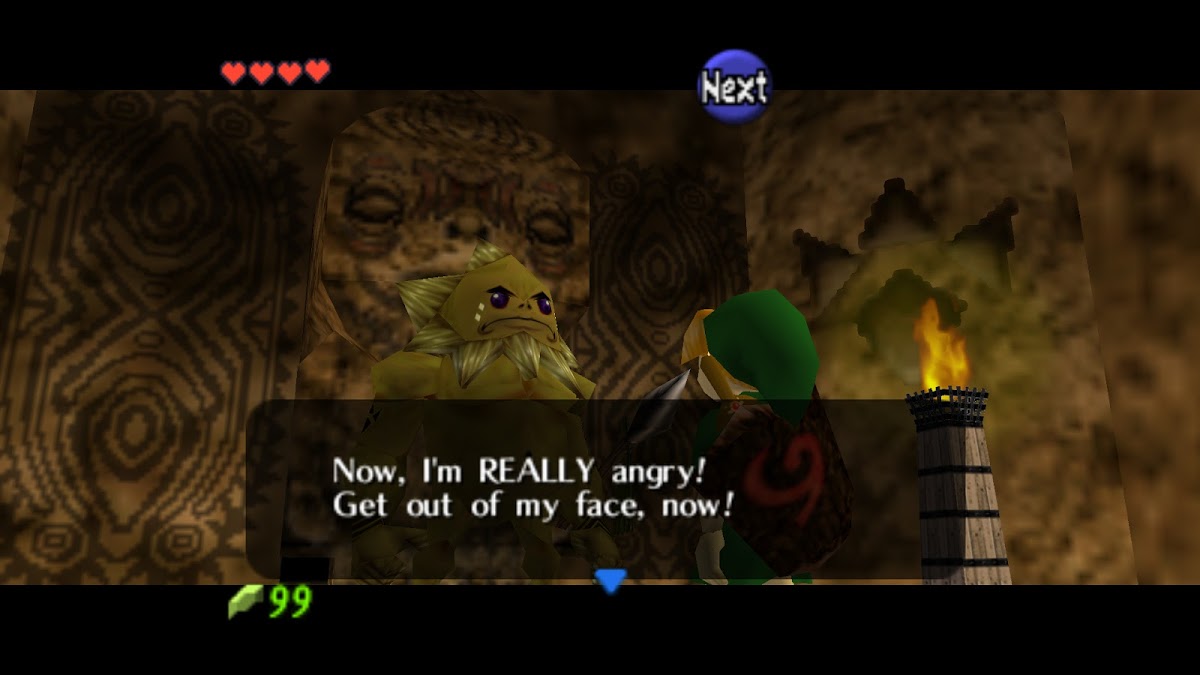 I'm angry! Read this darn letter, you! Nobody respects me for who I am!

But no, he doesn't' actually want to read the letter. He doesn't want to talk to me at all...


So I stop, and look around his room, and smash all his pots (video games!), and find a stick in one of them. He also has fire in there. Around the city was a bunch of pedestals like those, but none of them had fire in them. I wonder...
So I grab my sticks light 'em afire, and run out as fast as I can, only struggling with the camera exactly twice before I get it out to the pedestal outside. 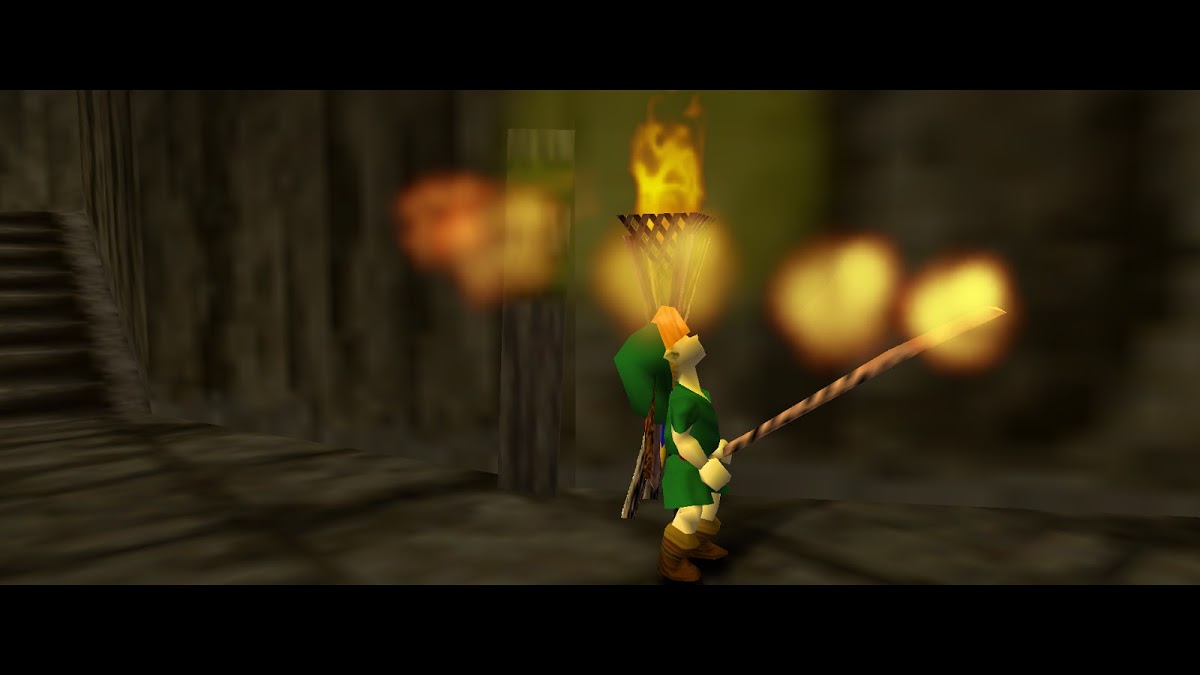 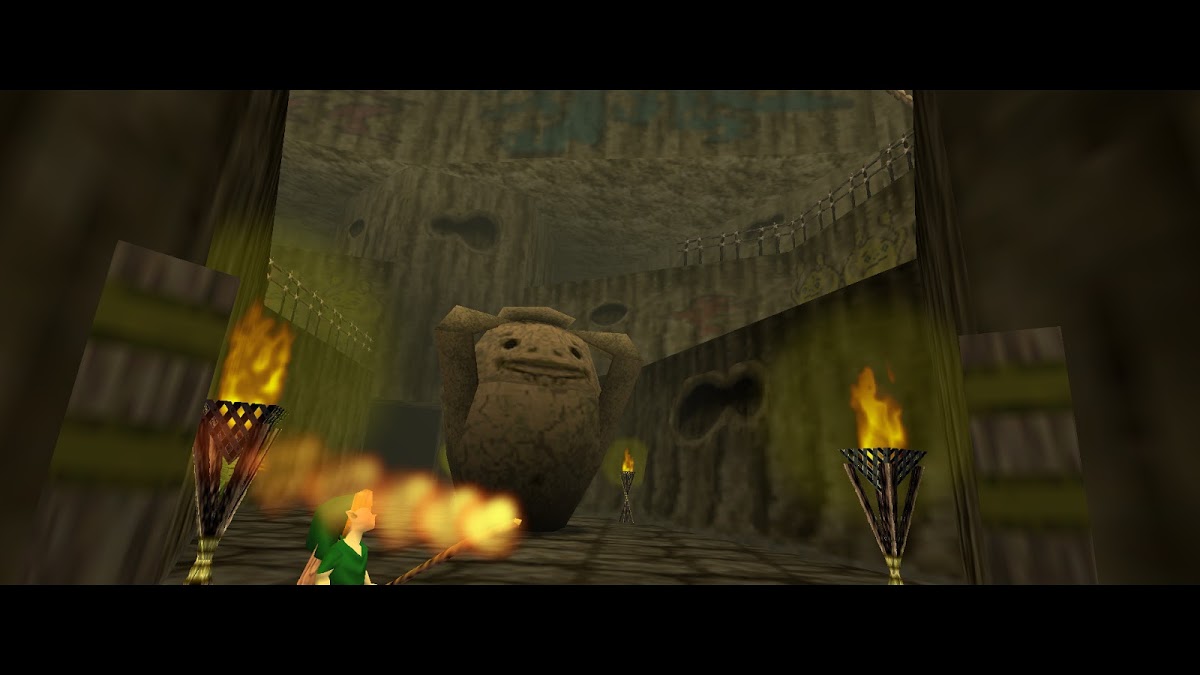 By the power of fire I must spin!

Which isn't really possible to get from an image :P But it is spinning, trust me! Also, something funny happened in the cut-scene because Link was spinning around like that too (also hard to photograph)... I need gifs.


So, with that amazing feat of Heroism, I go over to the guy next to the door and expect him to marvel at my feats of fire-bringing and urn-spinning. 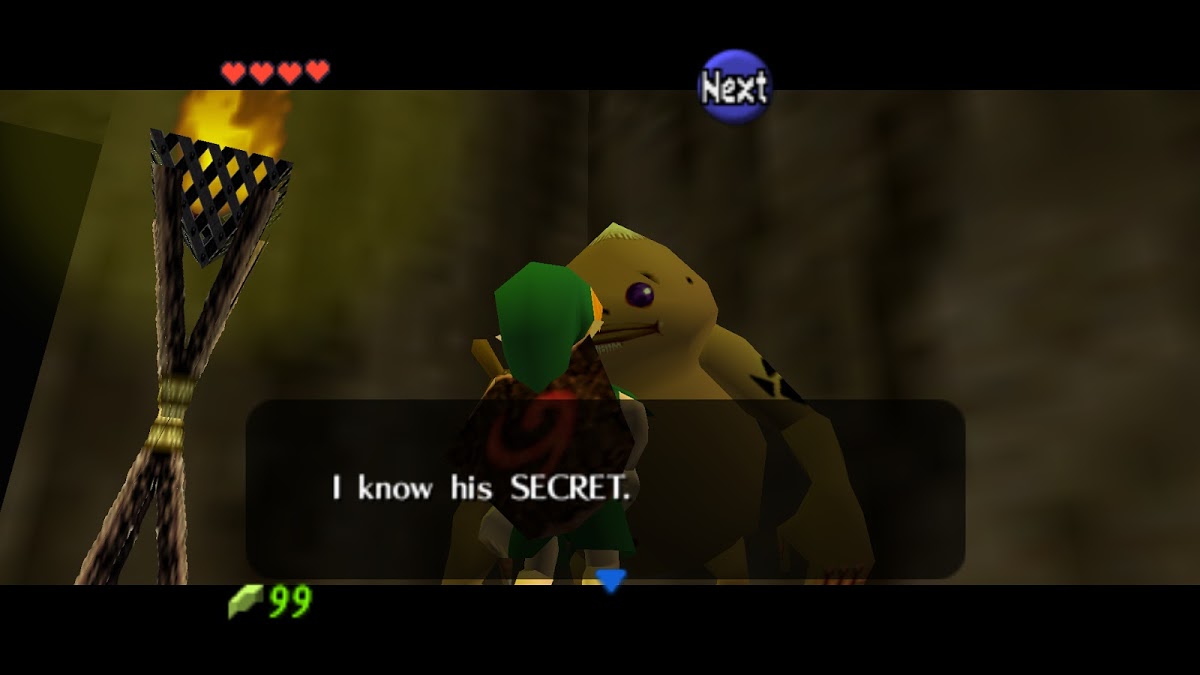 Apparently, if you play the "music of the forest" to him, he'll begin to dance! Because he loves that song!


Only, I'm in a mountain with no plant life whatsoever (except ones that explode), so it's not exactly the prime area to find a song of a forest, is it now? 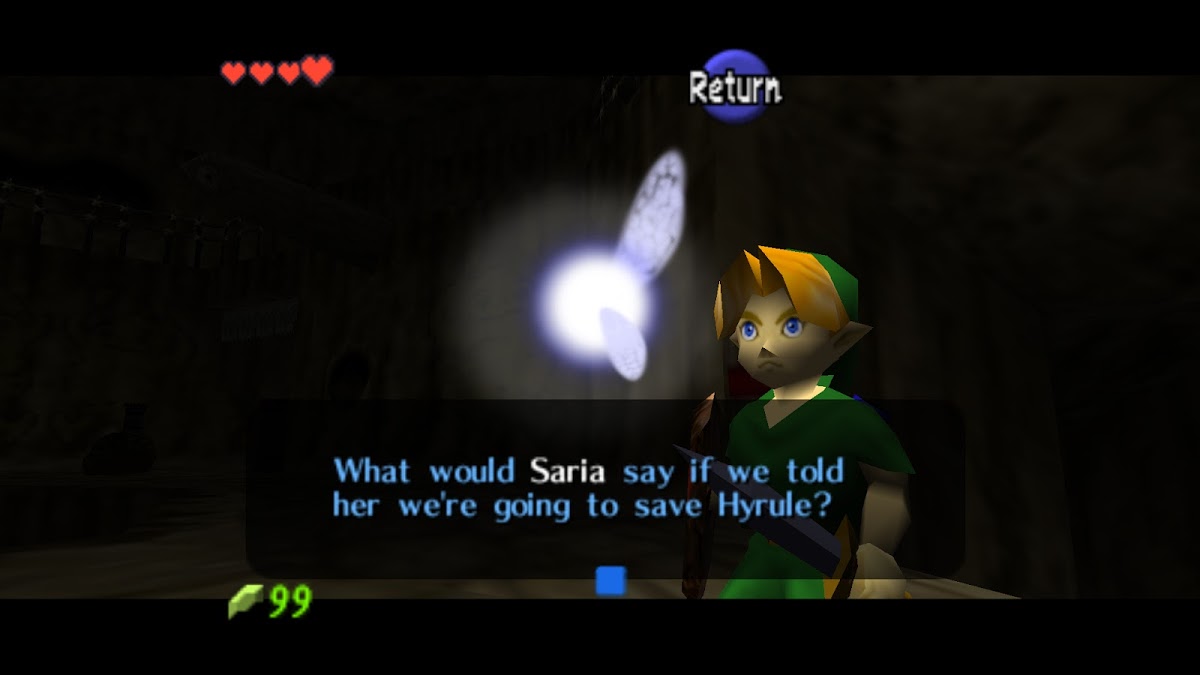 Except-- there is a single tunnel in the city that plays a foresty song, and the guy outside tells me that Gorons get super happy when they hear that music. So I'm already inside.


But the tunnel's blocked by some rocks. And Bomb flowers. But wait, I brought fire out here now. Guess what bomb flowers don't like? 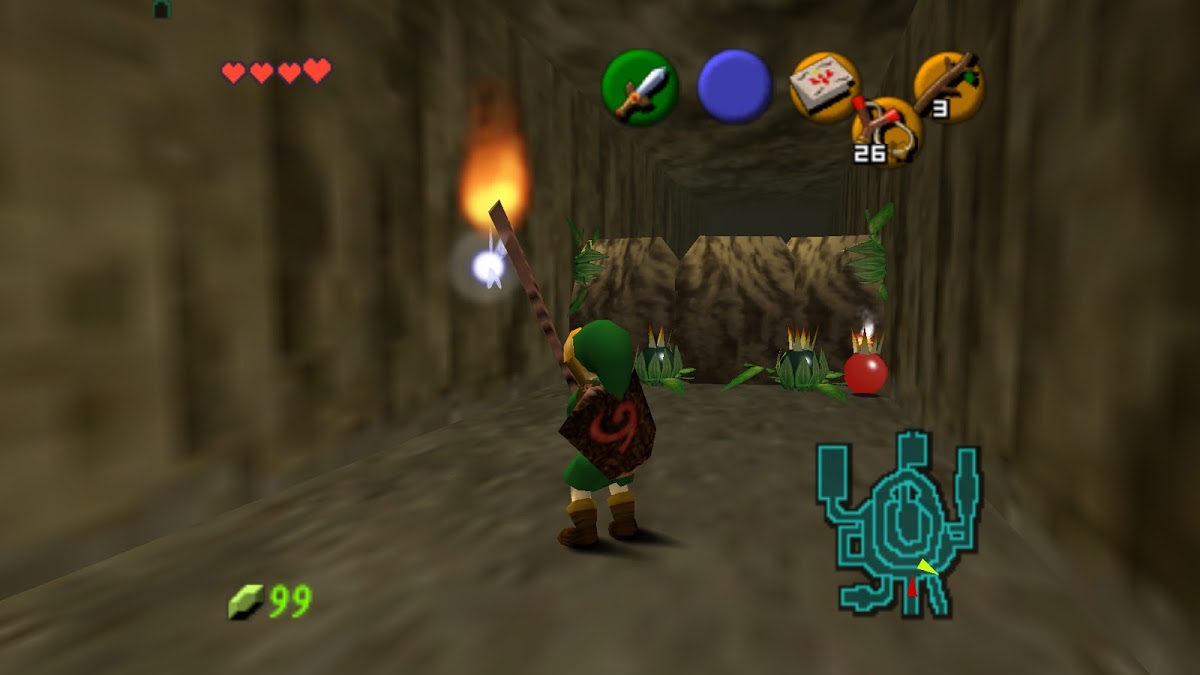 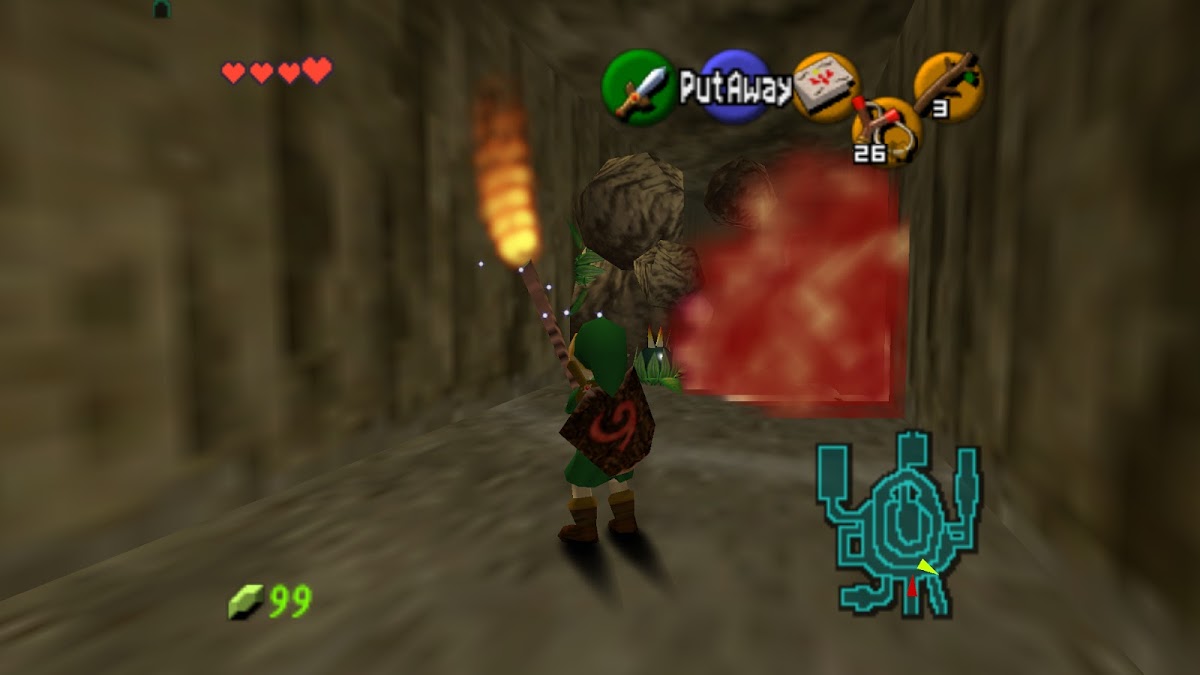 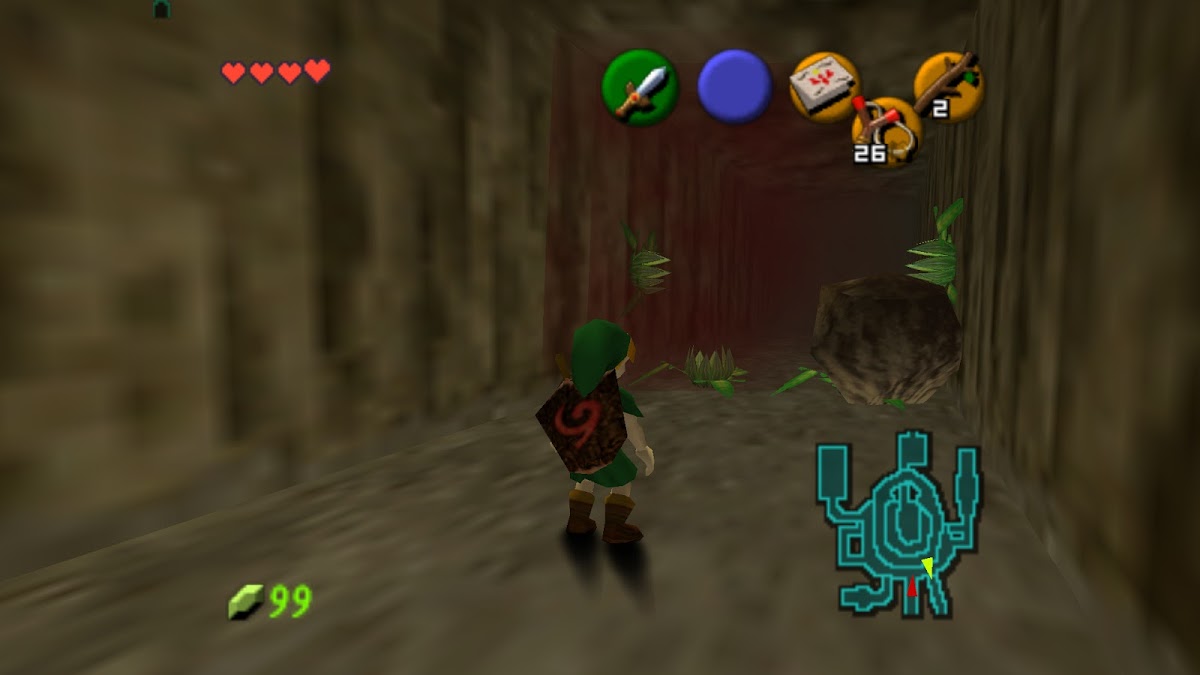 Alright, time to go into the forest-inside-the-death-mountain.
No really, it's really a forest. And look who's here! 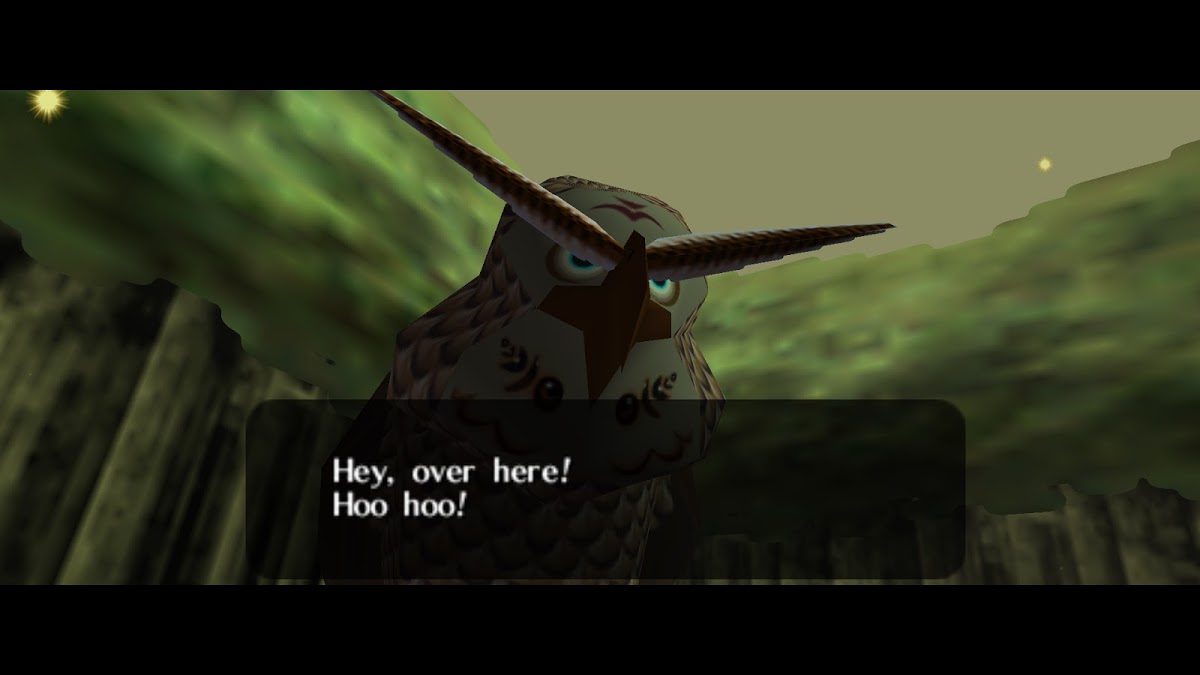 Owl-friend! He tells me that inside the Lost Woods - which these apparently also are, I can find a meadow where there's a wonderful tune (guess which).

P-shaw, I already went through this place once. No problem, owlie.


The Lost woods are actually darn simple: one of the three ways always have the loudest music playing out of it, so I just go through that until I arrive at the "Sacred Forest Meadow" - but something is wrong! There's a wolf! 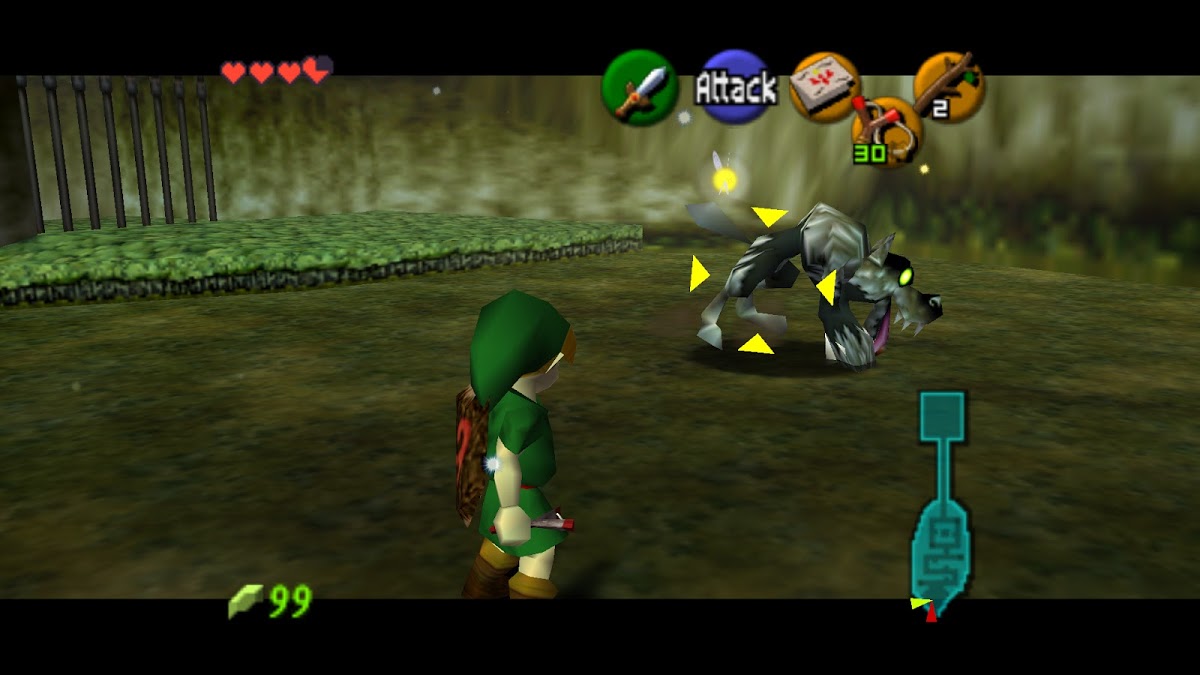 Which looks pretty scary, but all the sounds it makes are these kinda wimpy, sad sounds, which makes me feel really bad fighting it? Some odd sound design there. Unless they were going for a Sif thing...?

After that is a maze, where the game changes up the camera on me. 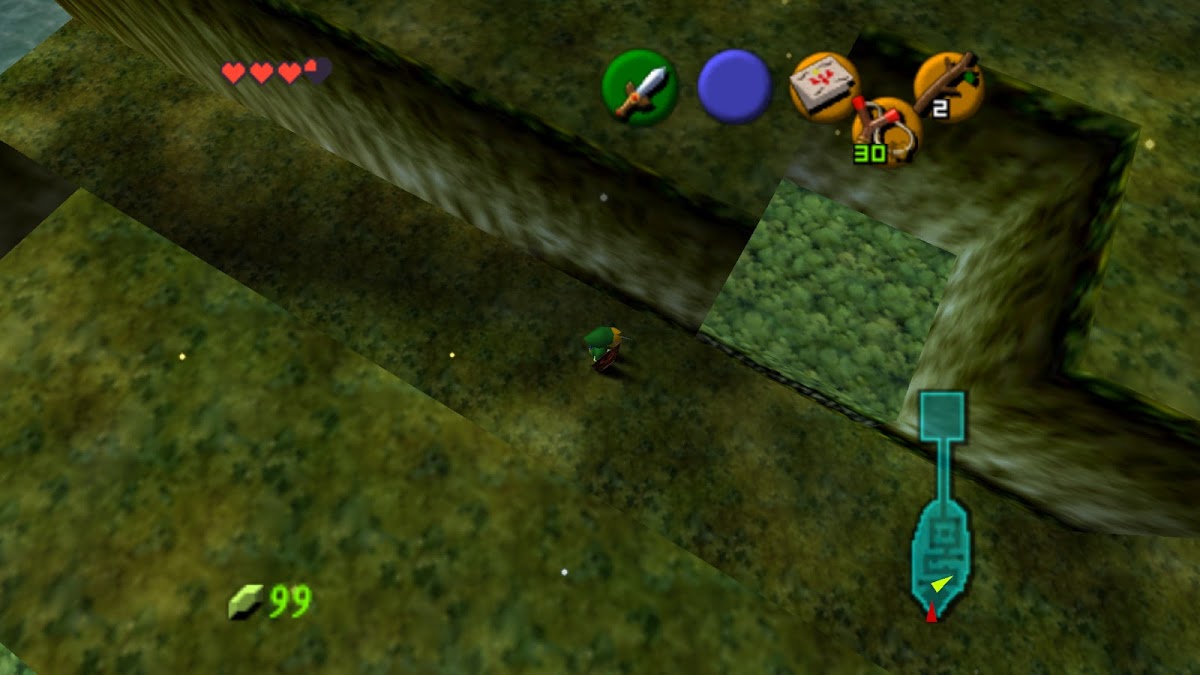 but is otherwise nothing too special, just a few nut-tossing guys, but I spot a hole on the way that I detour down into and find: 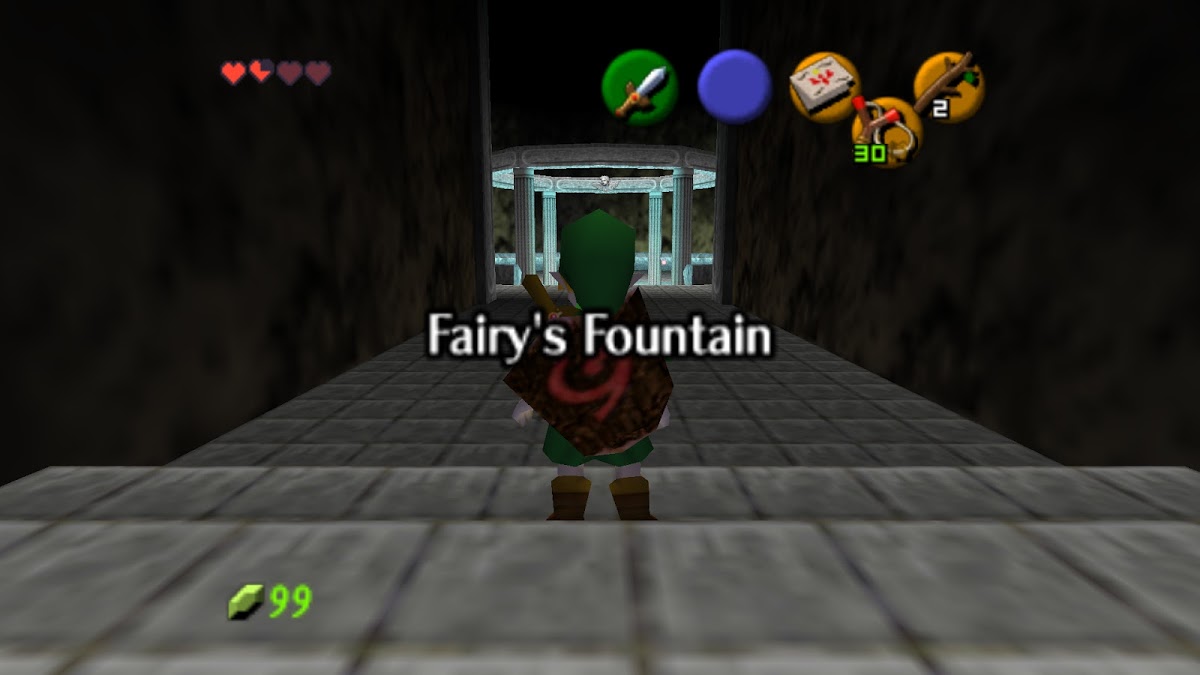 It has a lot of fairies, and then I go into it, and they sort of... consume into me, and disappear.

So now there are no fairies left. Right on. I just destroyed this sacred place. Link's a nice guy.

Alright, back up the real way to the actual meadow, and 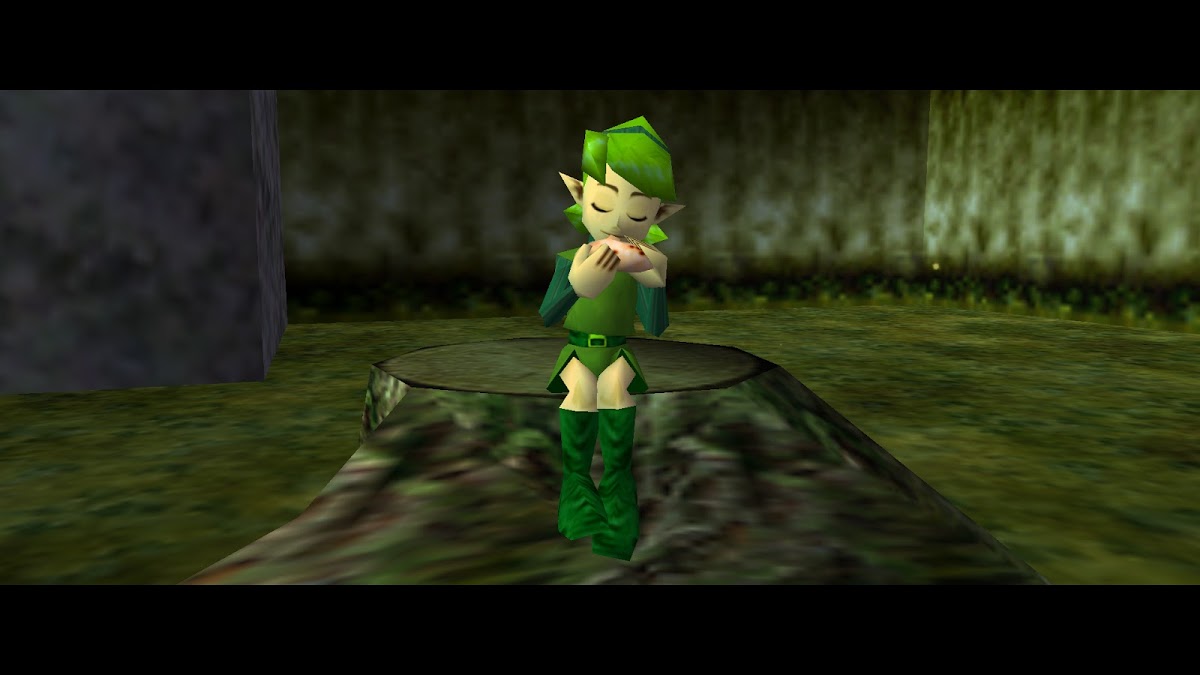 I guess Link CAN actually ask that stupid question now! ...If he could talk. 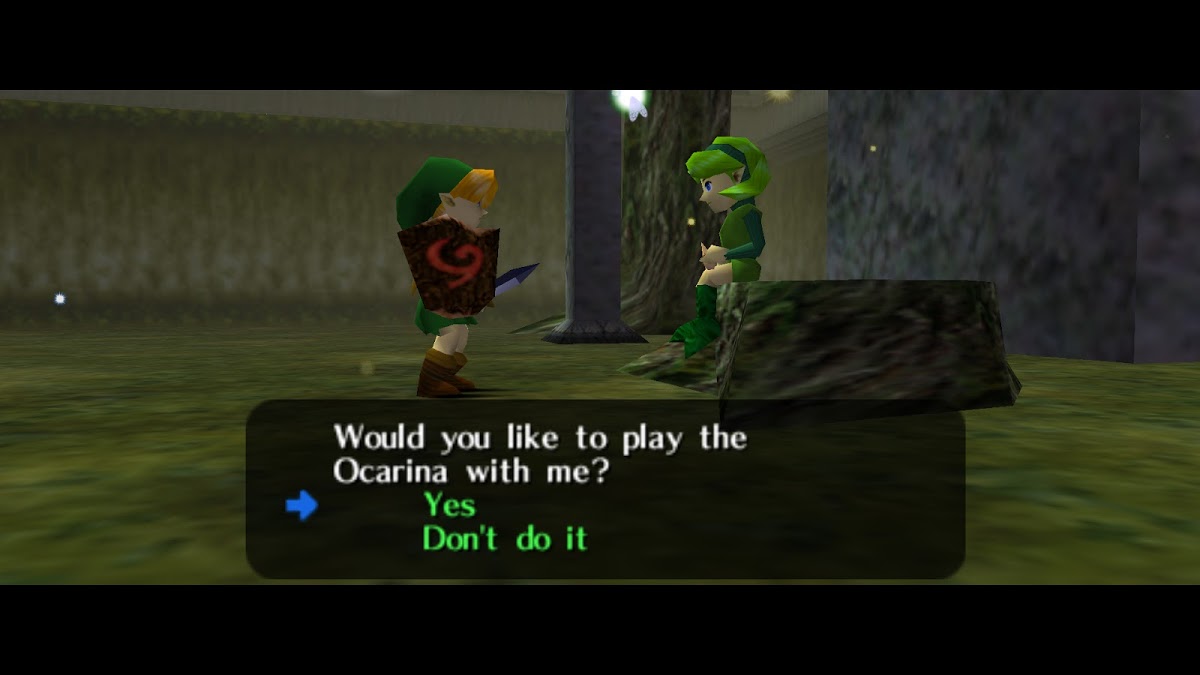 Also, didn't she make it sound like the ocarina she gave me was special in some way? She
just totally has another one. No biggie. 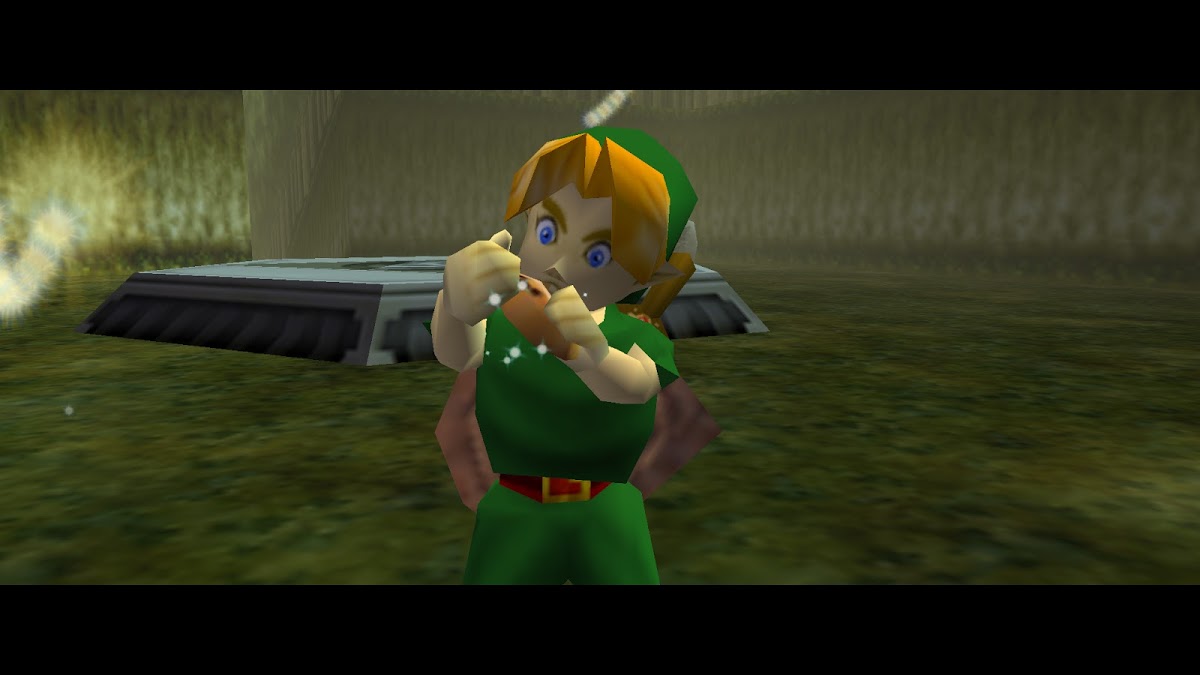 "I still don't know what this is!"

So then I learn "Saria's Song", which has this kinda strange power that I can talk to Saria when I play it? 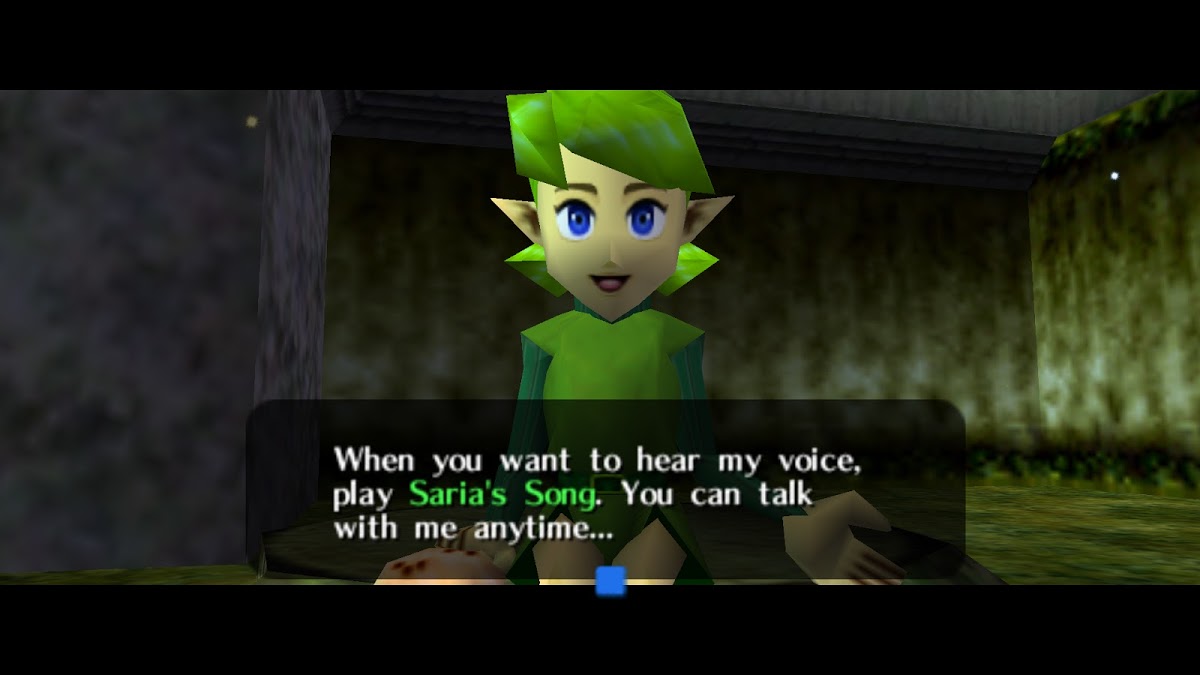 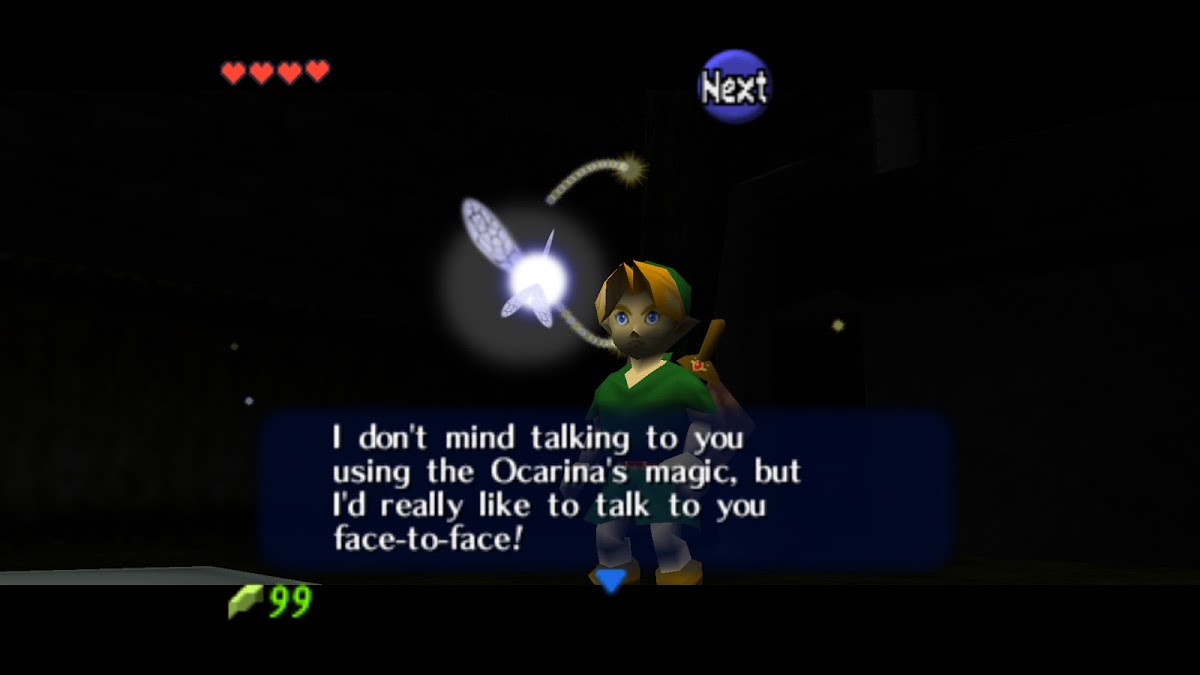 Well I'm right in front of you!

But, no, she doesn't want to talk face-to-face either. So, maybe you don't want to talk to me at all? Is that it? Maybe she just gave me the Ocarina to get rid of me. Now she never has to see me again. Clever.


Finally getting the hint, I leave her, go back out the maze and head for the forest where Owl-Friend is again to tell me what I already know (that I can play songs at places), while all I think about is I wanna learn that Owl Song on the ocarina.


Finally, I'm in the lost woods, and now with no music to guide me so I take the first exit I see and end back where I-- 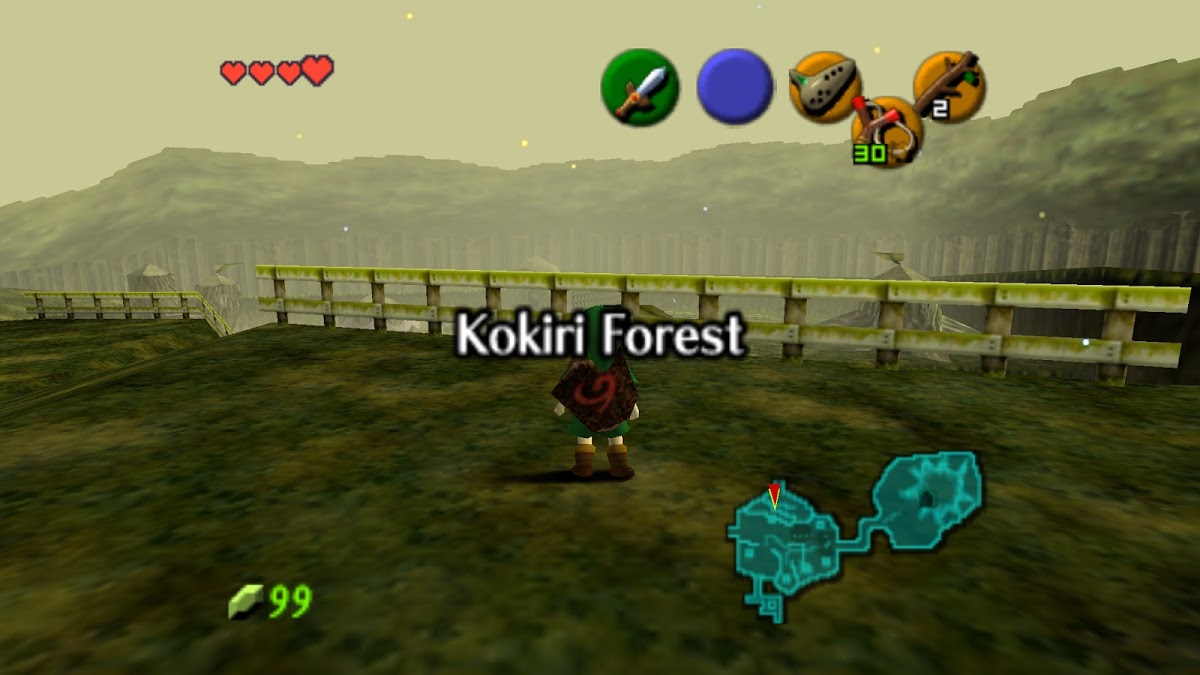 wait what. What am I doing here? Uhm, ok, go back into the forest, take a left instead. 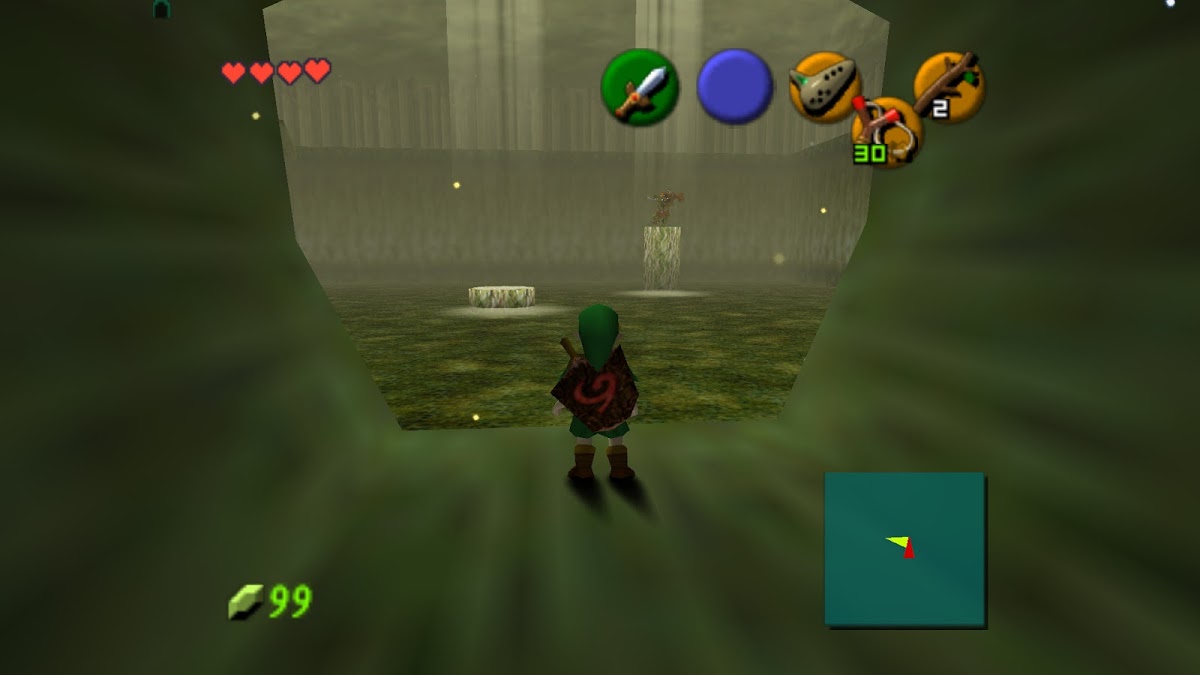 Uhmm. Hello? I'll just leave that guy to mind his own business.

Another few more exits and entrances and finally, I find a door back to the place I came from! 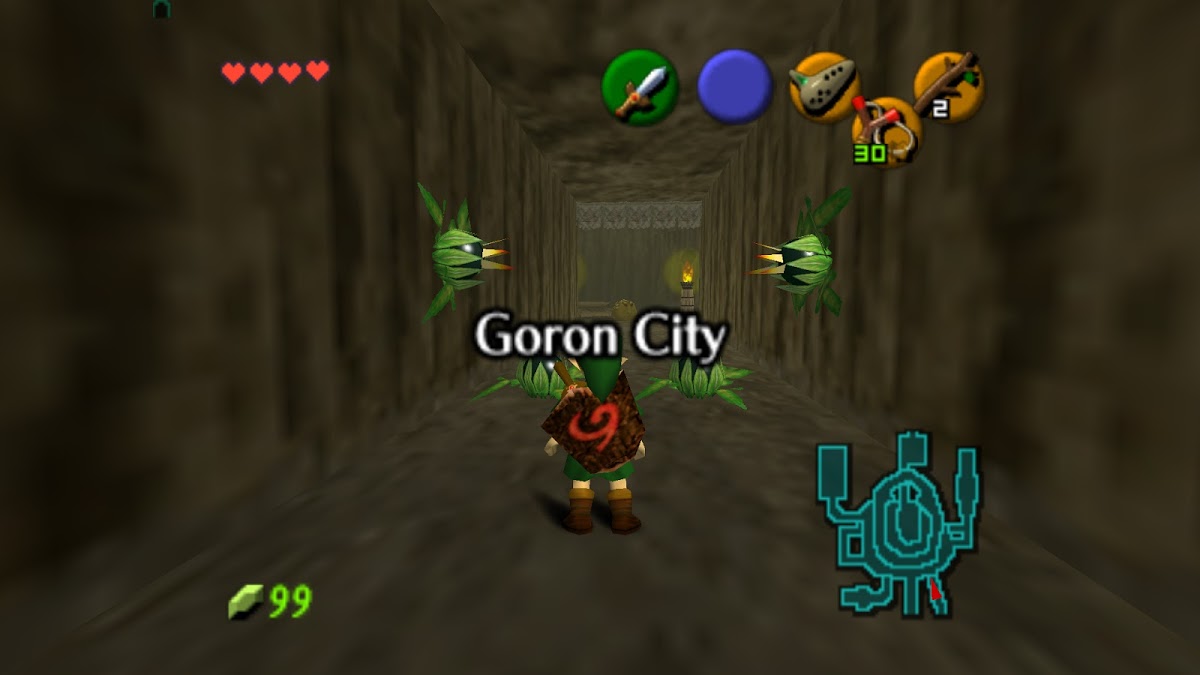