Ok, I had originally planned to do another game for this one, but yesterday evening I happened to play a bit of Sunless Sea and got to a setup too interesting to not do today. So here goes part 2 of this great little game. (Read this first for more of an introduction to the game).


Setup: I’ve just arrived at Port Cavendish, a pirate haven where I initially try to make some deals to meet with the Pirate King, but fall short with my abilities.
However, just before, I got lucky and found an empty mirrorcatch box—which doesn’t sound very lucky until I realized that I could sell boxes of sunlight in Port Cavendish. And a box of sunlight is a mirrorcatch box, in which sunlight has been trapped.
And I happened to know (from a previous playthrough) that there is a passage to the surface south of London—and on the surface is sunlight.

So I start my quest today by sailing home.

In other news, my cargo happened to be full because I was carrying some basalt stones that I needed to sell in London, so it fit anyway. 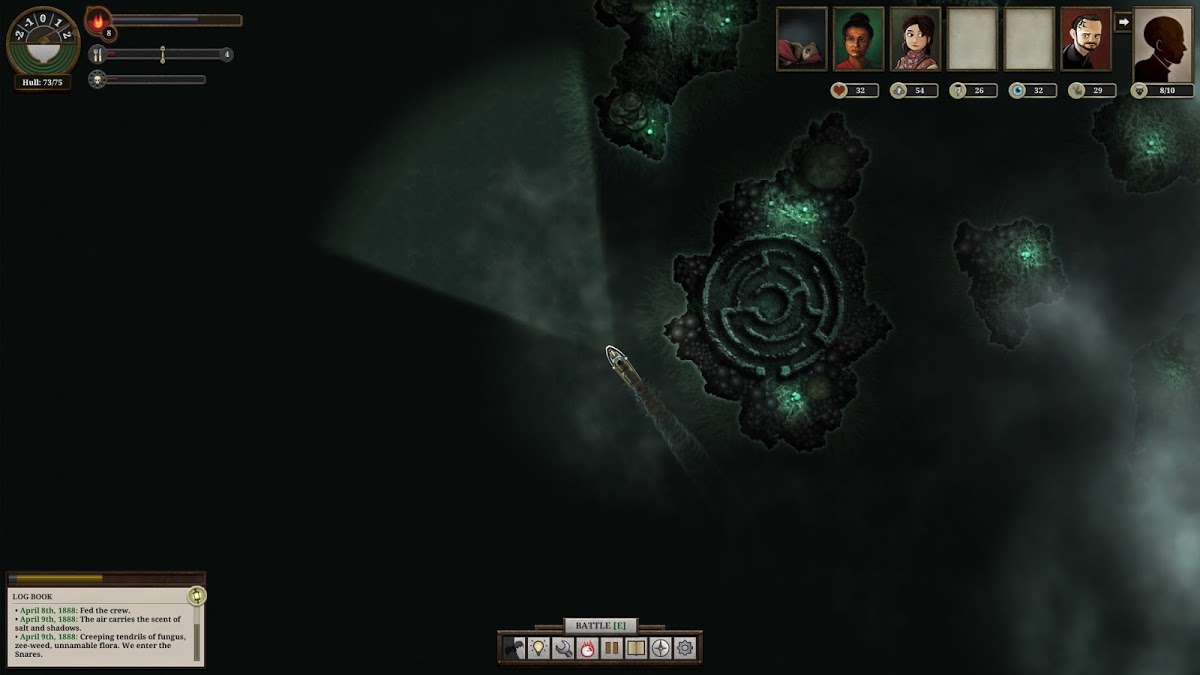 I have no idea what that spiral-labyrinth is or why it's there. But it's pretty cool!

I take a slight detour over uncharted waters, not because I plan to find anything but just to get a bit more of my map filled out. Instead, however, I find Pigmote Isle.

Not a seemly place, but there’s a resemblance of civilization, so I disembark ashore.

And all of a sudden, I find myself in the midst of a war between rats and pigs.

Uhm, and I’m supposed to pick a side. Uhhh. I hesitate a bit, going back and forth. They seem to be fighting over what the rats call “The Rat Star” and the pigs call “Our Lady’s Eye”—so probably some jewel or some such. 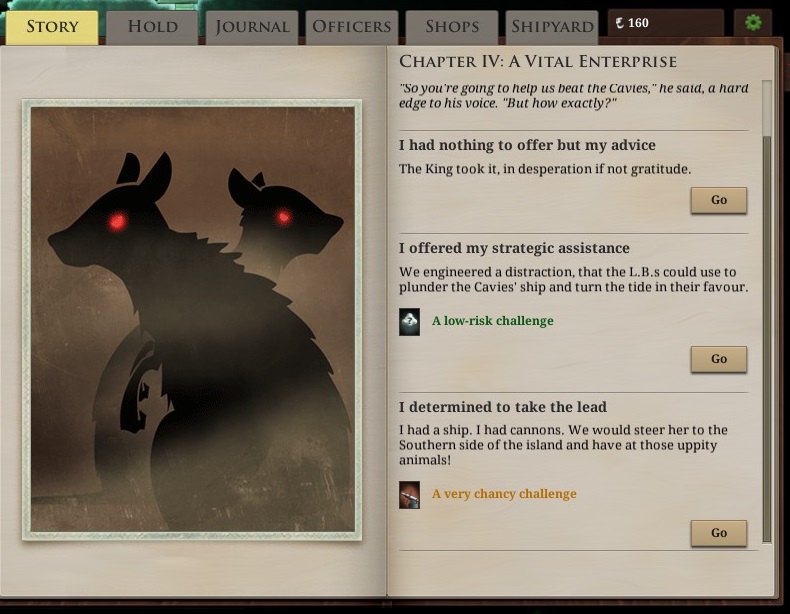 I agree they don't look super friendly. But they only showed that image after I picked them, okay?

I end up siding with the rats because they seem to be at a disadvantage and less pompous than the pigs, so I help them with some strategic planning. The victory comes soon after, and they claim the Rat Star and the island for themselves, with the pigs degraded to second-tier citizens living in ghettos...
I could even visit them afterwards and see the damage I’d done—or help begin a revolution against the rats I’d just inserted into power.

Back to London. A place I can deal with. Only large scale politics I don’t have to worry about happening there. And I can go back to being a well-meaning sailor trading basalt stones and sunlight to the highest bidder.

I stock and fuel up my ship, sell all the remaining cargo and get ready for the long trip south and up.

I’ll need a lot of fuel for this one. 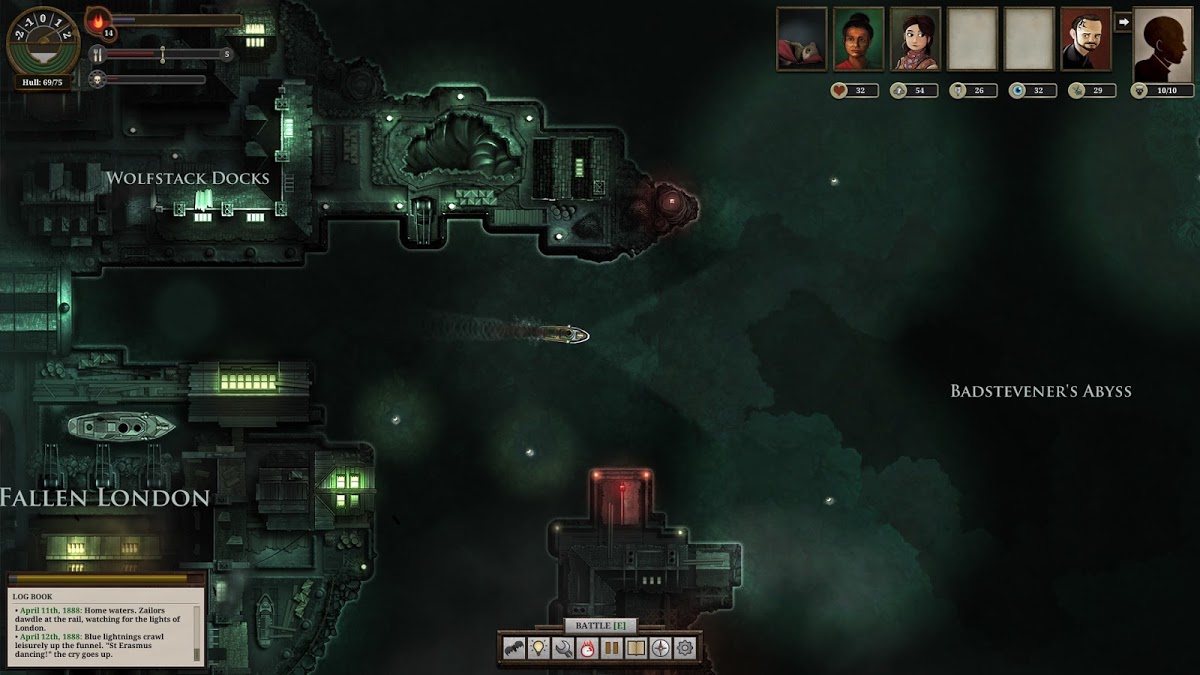 With the nose pointing southward and scraping by a couple of large unfriendly crabs, I find what I’m looking for: The Cumaean Canal. The passage to the Surface.

I stock up again as I realize I need even more fuel and then press the button to travel far, far away. 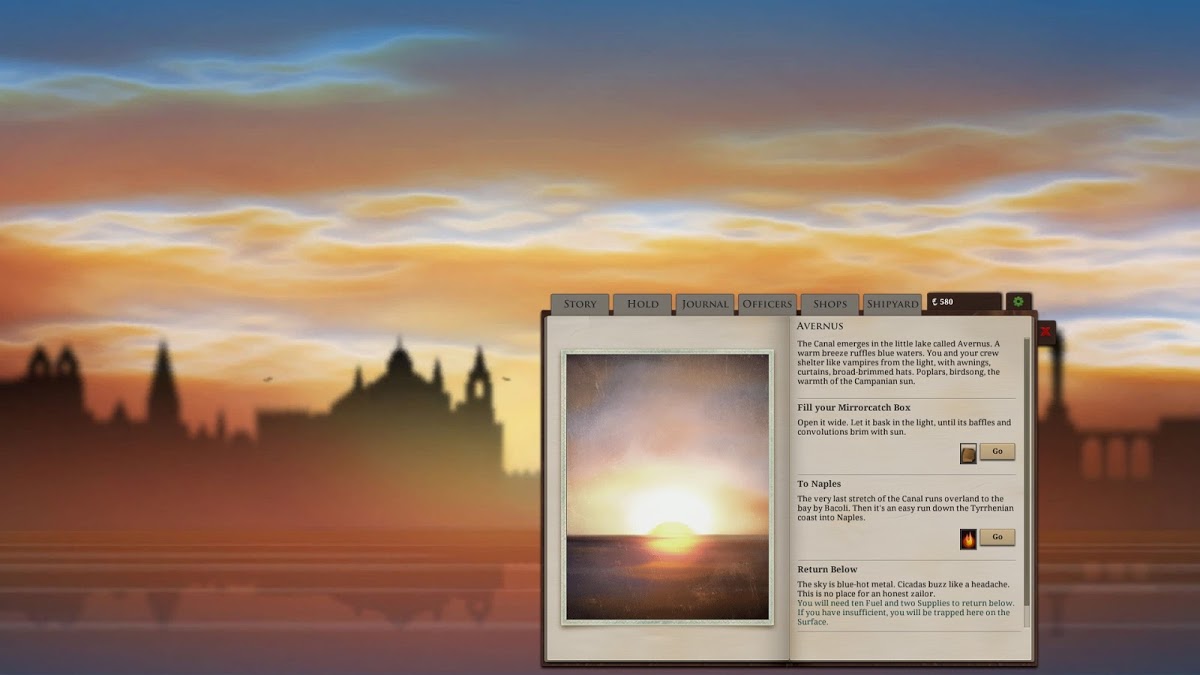 We emerge at lake Avernus, sunlight and birdsong filling our ship as I see my options. Immediately, I can fill my mirrorcatch box, trapping sunlight within its reflective walls.

I fulfilled my purpose, but damn, I’m up here; might as well have a look around. I first travel to Naples, where I can buy and spend a great deal of money on a great deal of things, and I travel to Vienna where I can aid in another revolution by smuggling some wares to London. They don’t seem harmful so I say, sure, I can use that extra money, and tuck their boxes inside my ship.

Up there, I lose 3 crewmembers, as they seem to vanish in the sunlight, slowly but surely.
Best get back underground. Yet, I realize I don’t have enough fuel to get back. You can buy fuel on the surface, but it’s expensive. Surface-travel is a costly affair.

Let’s hope I can sell this sunlight safely and for a lot of money. 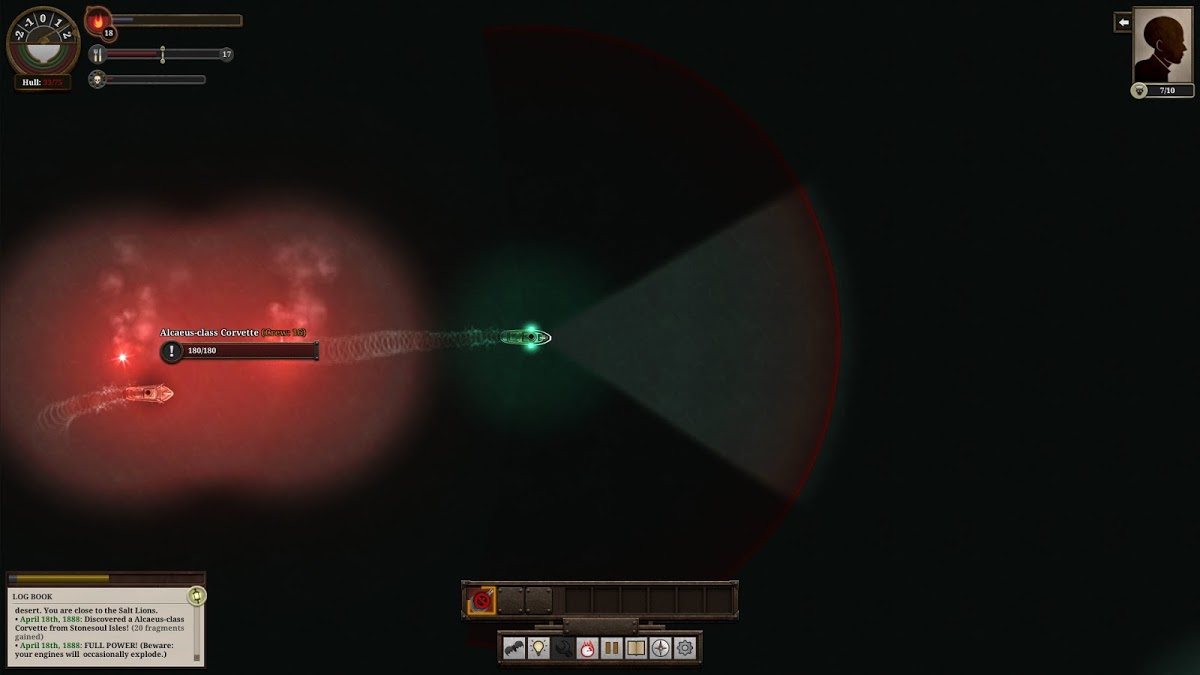 That ship means business. And I'm not up for it.

I travel, first to London to stock up on cheaper fuel (and to sell those smuggled wares), then to Port Cavendish halfway across the zee. On the way I stumble into a pirate ship, far better equipped than my own, and I scramble away from it, blasting my engine and almost blowing up my own ship.

I escape, but with my ship in a severely damaged state. Hope I don’t run into another one of those.

But I make it to Port Cavendish, and look to my options. I can sell the sunlight. It’s risky, but I don’t know what the risks are and I don’t know where else to sell this—so I sell it.

The sale was a success, 500 echoes in my pocket, but through sleazy second-hand trading, I lose the mirrorcatch box. Crap. Can't do that again before I find a new box.

Just before I leave I stroll a bit around Cavendish again, and through some more carousing, I manage to secure a meeting with the Pirate-King’s Claw, whom I swear patronage to.

His first job for me: Smuggle red honey into London.
Shit. This ain’t like that other stuff. This is seriously dangerous to be caught with. And I have no idea how to smuggle things.

Well, that’s for next time!