Live music is already a pretty special thing, as I think most would agree. Seeing musicians play right before your eyes is awe-inspiring, and everything from trained professionals at concerts to ragged street-musicians playing on oil-drums can be magical.

However, you expect that to happen in person. Live music needs to be, well… live.

Yet, I just saw something this Thursday evening that challenged that completely. I’m still thinking about it.

So, for context, I was playing a game called Guild Wars 2—an “MMO” (massively multiplayer online game; the closest analogue you probably have heard of is World of Warcraft), a game with a massive, online-connected worlds where people join in large groups and fight monsters, ancient evils, and yes, each other.

Not exactly the place you’d expect to hear a story about music, is it?

Well, here’s the trick about MMO’s, which is often not conveyed in fancy trailers and quick-fire explanations: They’re actually massive online public meeting spaces. They’re communities, and places where people talk with each other and goof around, they’re places where people can do whatever and find others who wants to do the same.
The big capital towns, which are a stable of these types of games, is a great example: They’re large zones completely devoid of combat or conflict, where people just go to trade, upgrade their stuff, craft a new hat, or just hang out with their friends.

And on a street corner there, in one of those towns, a person was playing an instrument.

Now, this was not a defined, programmed thing—it was not a computer controlled and looping melody like we see in many other games—no this was a player: A person. A human being typing notes on a keyboard and making notes happen in the world. And we listened.

(video of the whole thing (mildly edited) – unfortunately, it didn’t record my voice, so it sounds like my friend Frederik is speaking to himself.)

Watch the first two minutes of this to see what I mean. There’s this person (by the name of “Migraine Fox”, she’s the one with the golden armour) playing an instrument.
She plays music from The Lord of the Rings, Jurassic Park and Portal and more, all while we’re just standing, watching in awe.
She’s doing this by pressing the 1-10 keys on her keyboard, mind you, not by playing an “actual” instrument—but rather through the rather crude interface the game allows (and normally uses for combat encounters).

But then (at 2:15 if you’re following in the video), the true magic begins.

Another person shows up (which I unfortunately missed in the recording), and they start playing. She shows up with a bass and begins the bassline for the song Fox was already playing—and suddenly, they’re both just there. (She’s “Ayaneshi”, the one in all-white).

A spontaneous, happenstance concert the players themselves didn’t even know they were a part of until they were.

The song ends and they begin coordinating, talking, figuring out what each other can play—what they both know the notes of. It’s obvious they’ve never tried this before either—they’re not used to playing with strangers in here. Yet, they figure it out, talk it out, stumble along and manage to find common ground.
Just looking at the chat over the first three minutes (03-06 in the video) of their conversation shows this super well. They play a bit, stop, show each other what to do, describing how to play each other’s parts, and then, once settled, they begin playing.

The first song starts in earnest at the 7 minute mark.

They pick some Zelda songs at first, as an easy common ground: Most musically interested video game players at least know the Zelda songs, and it doesn’t take them long to start playing.
Later, though, the branch out to other stuff, not all of which I know myself, but they were clearly enjoying it as well.

And around them, a crowd was gathering. It started being just me and my friend, one other and the musicians. But after just ten minutes, we have about 6-8 people watching, and more showed up (albeit some left) over the course of the hour or so they played

You can see the video’s runtime of 47 minutes is nothing to scoff at, and I mostly just cut out some silences and duller periods where nothing happened. But we found these guys a little after midnight and I stayed up till 2’o’clock because of it—without ever actually “playing” the game. We just attended a concert.
A spontaneous, happenstance concert the players themselves didn’t even know they were a part of until they were.

Some of my other favourite moments are at 10:50 where Ayaneshi shares how to play a bassline to Fox and she just picks it up and they begin playing On Melancholy Hill by Gorillaz. Or at around 20:20 where they first play the Ocarina of Time Shop theme, then play it again faster because they felt it was too slow. Or at 35:30 where Fox begins playing and Aya just picks up the supporting notes, without specifying the song. 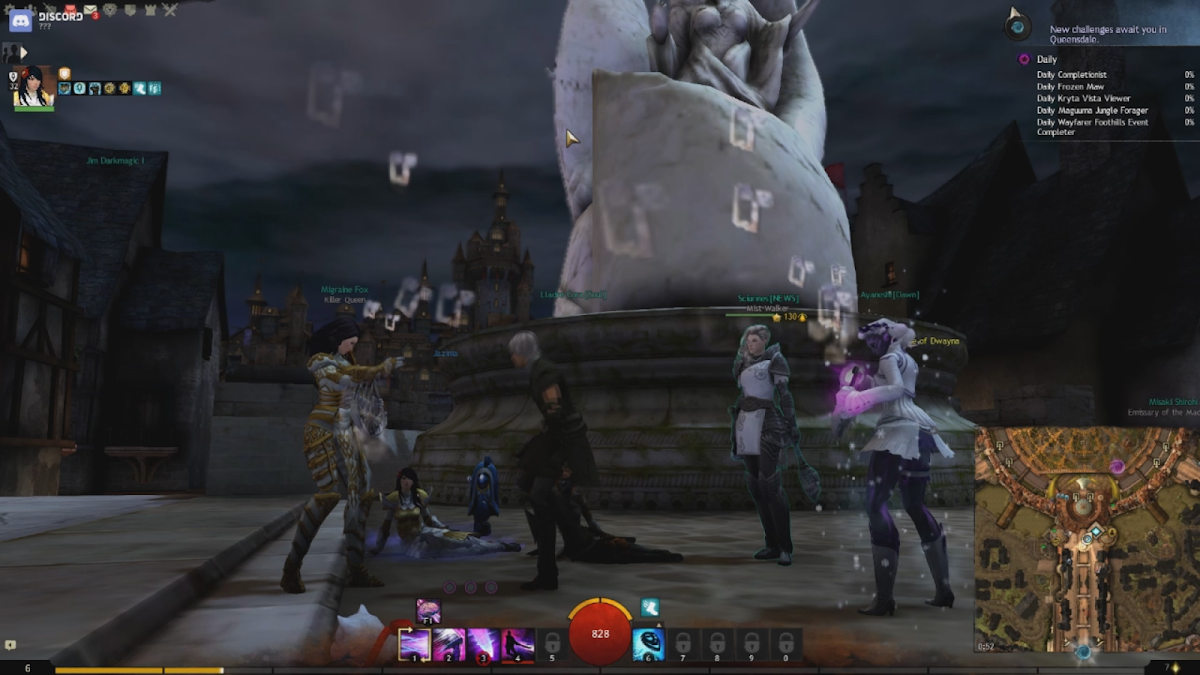 It turned to night while we watched.

And meanwhile, just the most random MMO shit (pardon the language) is happening in the background. Just watch any 5 minutes and you’ll have no idea what’s going on back there. Creatures snarl and jump around, angels and common thieves dance or jump, silly NPC’s walk around selling bread and saying greetings, cat-people talk and spells are cast, and it’s all just pure nonsense if you don’t get what’s going on (and trust me, I didn’t get half of it either).

Another favourite moment is at 10:50 where Ayaneshi shares how to play a bassline to Fox and she just picks it up and they begin playing On Melancholy Hill by Gorillaz.

And yet they keep playing, and we keep sitting there, watching, calmly, not giving a care in the world about what else is going on.

Have you ever heard music that just made you stop?

Someone playing an instrument in a way you just hadn’t heard before? Walking by on the street in a foreign city and just… listening to it. Have you ever stumbled upon something, knowing that if you looked away, you’d never be able to find it again?

Sure, there’s a part of this that’s the novelty of seeing this in a game where you don’t really expect it, but there’s another part to this that it is just amazing because it is amazing to see musicians perform.

Yes, it was virtually, yes it was not “real” instruments, but there’s no reason not to consider this as what it was:
Live Music.
It was two people who’d never met, creating magic together because they wanted to. Two people who shared something special with the rest of us who were lucky enough to stand by, watching.

[EDIT: After talking with one of the people who did it after, this is apparently something a group of people do regularly so you might be able to catch them there as well too (on the EU server)! ]