Hello, and welcome!
It’s been a while since I did one of these so I guess I should explain the drill again: I’m going to list out what I’ll be working on these next 5 months, partly for my own sake, but also for ya’ll to see and hold me accountable (potentially?).

Most who’ve known me for a while known that I’ve been “writing a book” for a long-ass time now. Specifically, this November I’ll have worked on it since 2012. That’s 6 years. And for a long time, it seemed like an eternity project, but I’ve been steadily working on it and now I’m finally able to say I’m at a point where I’m almost happy with it. There are a few sticky points, and especially one I just got great help from a friend talking through so I think I know how to solve now, so all I gotta do is grind through this last bit and I’m calling it done.
My deadline is this fall. By December this year, I should be done. Preferably, by November, but I’m letting November be a buffer month.
If I’m done, I’d love to do something for NaNoWriMo, but I’m aware that I might be too stressed about finishing touches so I’m willing to concede that to just more editing. BUT would love to do something else.

Next step for the book is beginning to figure out how to get it out there. I’m still not sure how that’s gonna happen (I have some ideas), but I’m planning on having something I’m satisfied with before I begin throwing it at the world.
That’s also why I’m not going to talk too much about what’s in it until that point. But expect more later! I will talk about it SoonTM.

In 2015 I made a small game called Eravola for the “Write-a-Game”-challenge, and I am really happy with how it turned out. It got awarded a runner’s-up by the judges, and talking with one of them at GDC (the great Anna Megill) I made up my mind to do some more with it.

So quietly, over the last couple of months, I’ve remade the game into a new Unity project, with a much better, more scalable design and some much better programming than what I hastily made in a month, and I’m now at a point where the game is completely replayable as it was back then (more or less), but with a much better core, and even better looking! (as odd as it sounds to make green text on a black background look better, it is possible. 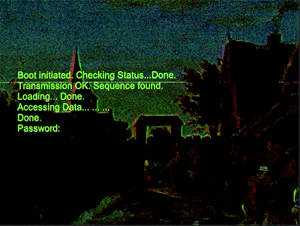 Promo image for the previous version.

So now the plan is to expand and make it more of a full thing.
It’s not a sequel, the events of the “first” Eravola will still be present, and the new game will also just be called “Eravola” but the previous project can be viewed as a demo of what the full story will be (with some changes, no doubt). The full game will start there and expand the story from it, and take it much further.
I’ll still leave the old game up but probably rebrand it to a demo or preview version or something. But that’s quite a bit in the future right now, so we’ll see.

In an admin point, I also need to fix some stuff on my website. There’s been a bug for quite a while now where every 10th article on the homepage doesn’t show—it just shows two horizontal lines but nothing in between. And I just noticed that the Sunday Morning Game Page loses older entries, which I didn’t expect and it’s bad because I didn’t want the older things to just disappear.
That’s not really a project, just me noting that I need to do this.

Finally, the last three things I’m going to look at is:

So that’s about it. I think that’s going to be a fair amount of work on top of my now two part time jobs (how’d that happen??) so we’ll see how it all goes.