This is the chronicle and complete legacy of Count Bartholomeo of Corsica.

Count Bartholomeo woke up one day in the year 1337 (yep. I didn’t pick that.) and realized that he didn’t have a child, and thus, his dynasty would seize to exist. 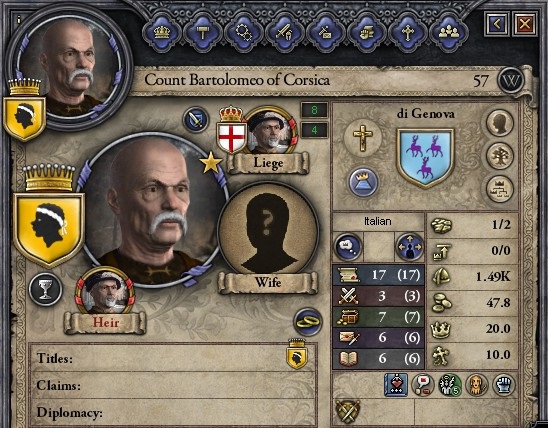 Meet Bartholomeo. Count, Bald, Childless, and Old. He's not got a lot going for him.

However, Bartholomeo was an clever man, so he knew that all it took was a little marriage and some time, and even in the ripe age of 57, it is possible to, ahem, procreate.

So, married he did get, to a woman (sorry, forgot to write down her name), and they, after months and months, finally, got a baby child. Her name was Ausonia, and she will become important to the story in a bit.

However, first, Bartholomeo’s quest was not done. A brief setup: Bartholomea is Count of Corsica (the Island), and that is owned by the Republic of Genoa. My liege, Serene Doge Coraddo of Genoa (again, not me), is alright. But Bartholomeo is a cruel man and decides that he'd rather be the king of Genoa this that old guy. But first, he needs land, so he sends his Chancellor to fabricate some claims for the county of Pisa, because that looks very open and easy to take in a war—should it ever come to such… drastic measures.

While plotting the grand conquest of Italy, disaster strikes and Europe is stricken by The Black Death!
My liege, and my mother-in-law are among the first to die.

However, this new liege (don’t remember the name) sees more eye to eye with me and both elects Bartholomeo his Chancellor and goes to war with Pisa!
Neat! 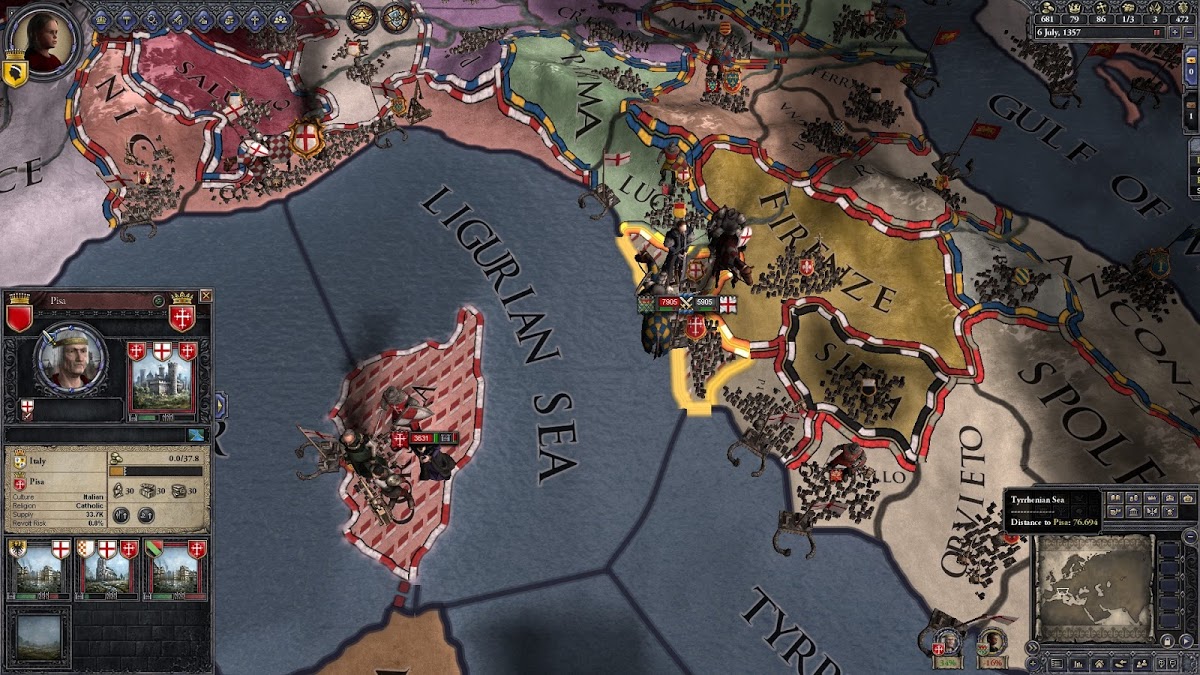 Look at that army in Corsica, just sitting there, sieging me. While Genoa does nothing.

And then Bartholomeo dies.
This is Crusader Kings 2. A game in which death comes as frequently as smallpox. And quite often because of it. Or, more likely from, inheritance-related murder plots.

Bartholomeo’s only child, Ausonia, still just 0 years old, thus takes over as the Countess of Corsica.

And then the real journey begins. Because her first order of action… is to be imprisoned. You see, the war against Pisa didn’t go so hot, and they… well, kinda plundered the entirety of Corsica and imprisoned Ausonia and her mom.
Oh, and then the guy who was fabricating claims in Pisa died, too. Mysteriously. Crap.

Genoa, after a miserable war, negotiates peace with Pisa (thankfully, idiots. They could’ve totally won that) and Ausonia gets the ability to ransom herself (!?) to herself (!?) for 70 gold.
And the mom for 10. Priorities. 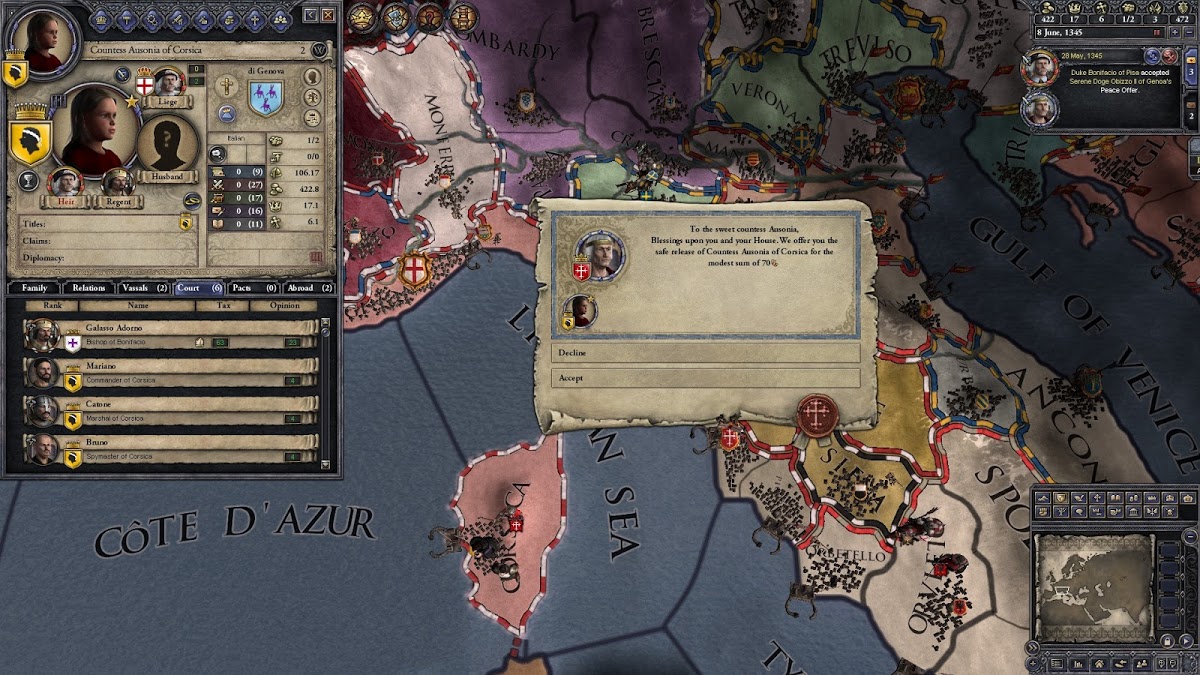 Free at last, as a 0 year old child, I have... very little freedom. I have none, in fact. Instead, it’s effectively my Court Chaplain—a priest—who controls my Island as the regent.

So… I begin to plot in silence. And wait my time.
My mom dies of… illness. Hmm. I am skeptical.
The Liege dies again (why do they always elect old-ass men??) and I spot a plan in the corner of my eye.

The current heir to Genoa is Luca, a 17 year old boy, with no children, and no marriage.
I’m currently a 3 year old girl, but betrothals can be arranged. And whattadaya know if a little marriage wouldn’t help smooth things over?

But.
I can’t. Because my bloody regent will not allow me to bethrothe Luca, because he doesn’t like him. Curses!
And I can’t kill my Chaplain, because I’m a child.
Sooo….

Years go by. Wars happen in the distance and not-so-distance.

And then, stroke of luck, my regent dies! Of natural causes! Wow!
But..
Crap. Luca has gotten married in the meantime. And now has three kids (Busy!).
Hmm.
Well. There’s only one way forward: Murder the wife. 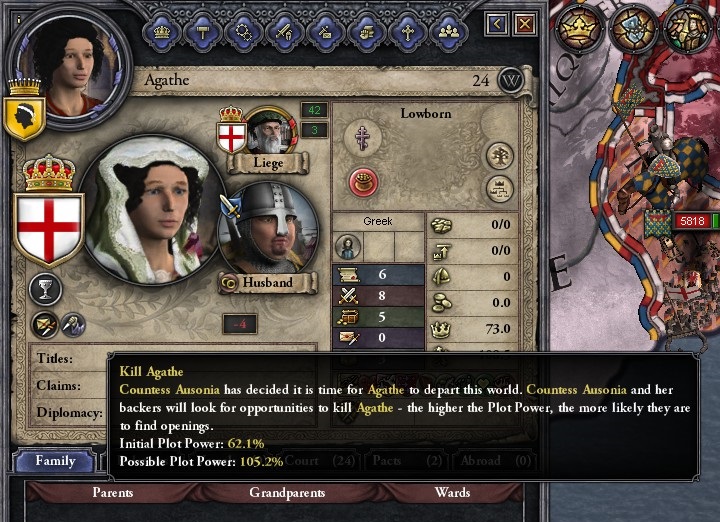 This, actually, is a terrible plan for a lot of reasons, but heck, I had to do something. So I started a plot to murder Agathe, the wife of Luca.

Once I’m grown up at least, and don’t have regents not telling me what I can’t do.

Another war with Pisa happens, and this time, I’m bloody tired of Pisa always sieging me for no reason.
So I hire some mercenenaries come come in and clean up. And they do so, quite effectively, I might add. I’d recommend them to anyone who has pesky problems with Pisa in the future. 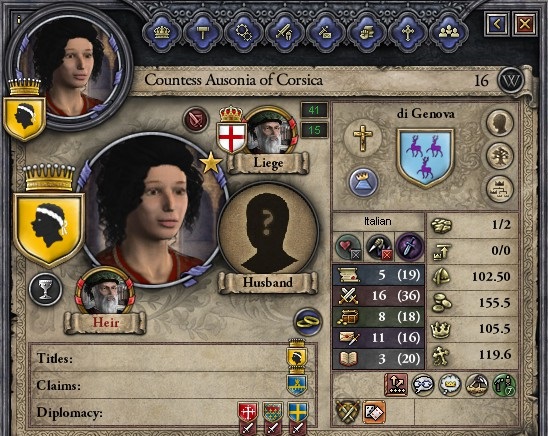 All grown up! You know 16. The age when everyone becomes a responsible adult.

The war comes to an end and, this time, we get Pisa!

But, of course, I don’t, because it was my liege’s war, so it’s really Genoa who gets Pisa. And I get nothing. For spending all my money.

A little bitter, I decide to finish what my father Bartholomeo started and start a faction for Independence. I no longer want to be a part of the pesky Genoan Republic.
I’m ambitious, and running out of time, so I think, what the heck, let’s rebel. I try to demand independence, but Genoa is not so pleased, so they go to war.
With lil’ ol’ me. (I’m not that old.)
And I’m royally fucked.

So, I go to my only resort: Mercenaries.
I hire some other band because I don’t have enough money to hire the big boys this time, and we gather up for war.
I begin the voyage towards Genoa and then I run out of money.

Which means I can’t pay the mercenaries. Which means they don’t want to fight for me. 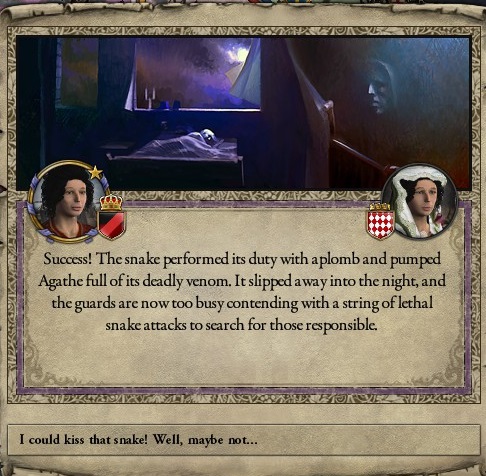 I… surrender immediately. And sail back with my army, only to realize, that wait, oh no, I got imprisoned. Again. This time, by my liege.

Because of course I did.

Oh, and by the way, randomly, this is when Agathe dies of a snake-bite! Just so! Plot successful!

But I’m in prison, and guess what happens.
They execute me.
Oh yeah, I never did get married. No children. No dynasty. Game over.

The life of Ausonia of Corsica ended has it began: In prison. 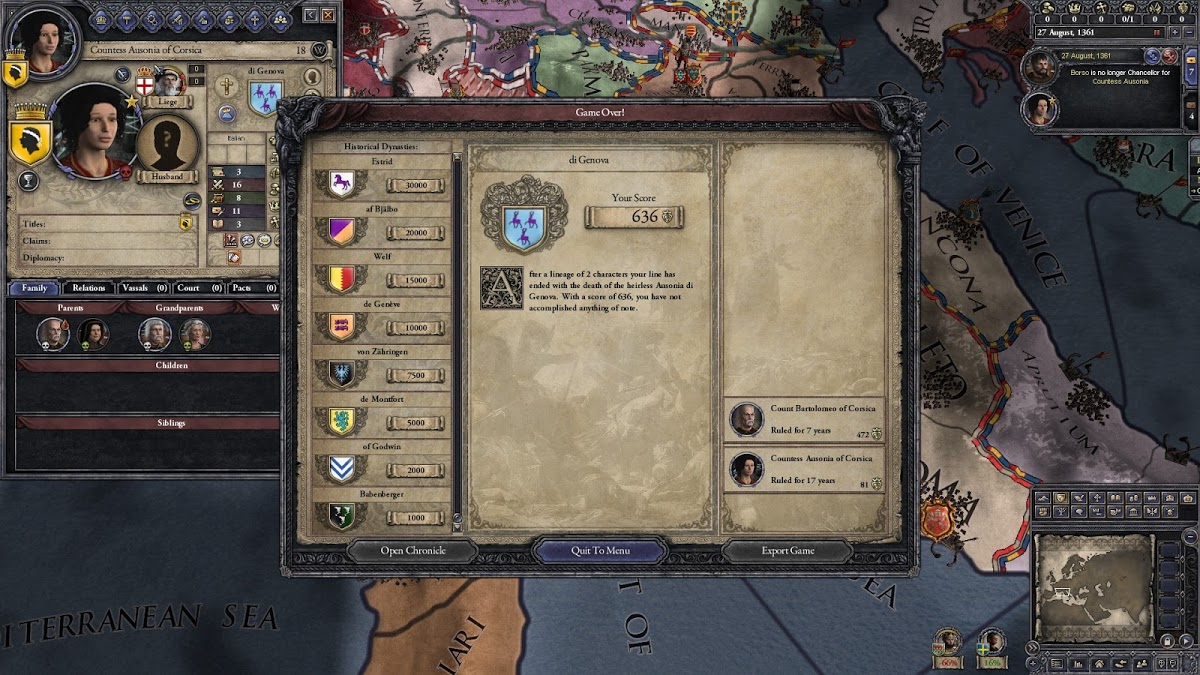 Hope you enjoyed that little tale from my morning play of Crusader Kings 2.
Man, this game is so great for storytelling.
This was, frankly, a pretty boring playthrough of it, and so much, much more interesting stuff can happen. I have a far better story I might write up at some point finally, once I figure out the right format. But even this shows just some of the zaniness that can happen in this game. It’s wonderful.


Hooh, this got long. Happy sunday!