I’ve been hesitating to do this game here because it’s sort of a weird one for the format. If I play Dark Souls for an hour, two game sessions might be very different depending where I am: One time might be good, with new areas to discover and a lot of progression to talk about, but I might just as well be banging my head against the same enemy or boss for 90% of the time, which wouldn’t make for great reading. Also, the story of these games are really hard to talk about, as it’s super abstract and requires a lot of background knowledge I’m not able to parse in 700 words.

But, it just so happened that I killed a boss yesterday, so thought I’d take the chance. And it turned out pretty great. Didn't avoid the abstract story stuff, though. So be warned, I guess.

Which means, fair warning, there are actual Dark Souls III spoilers. From around… halfway through I think? (After Pontiff. If that name means nothing to you, and you don’t want to be spoiled, stop reading now). Also Dark Souls 1 spoilers?! Apparently? 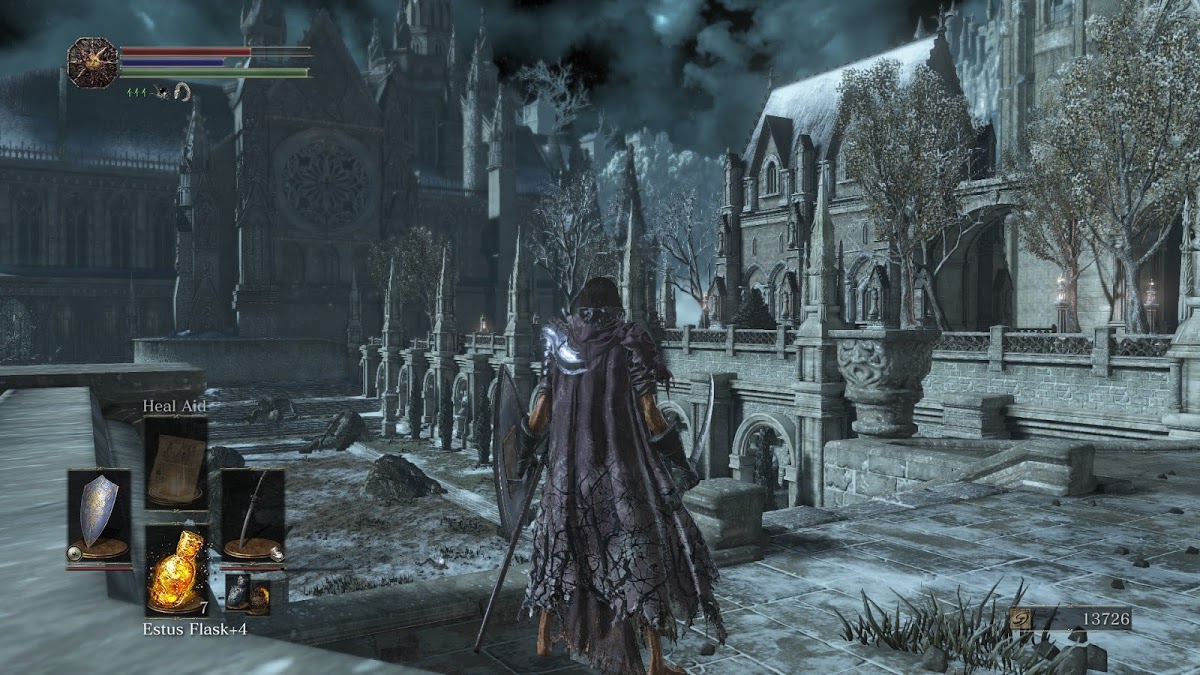 My current armor is ragged as hell and not fit for this snowy weather at all. But at least I got a cool cloak.

I load my save here, just briefly after slaying the Pontiff Sulyvahn (hey, he attacked first. Didn’t seem like a nice guy) in the church there to the left in the image. Just after, I went over here, up and around, so I missed some of the items below (the glowy thing just by my shield). So went down to get those and… those “dead” giants there. They weren’t dead. As I took the last item, one of them woke up, and I began running as fast as I could the other way. 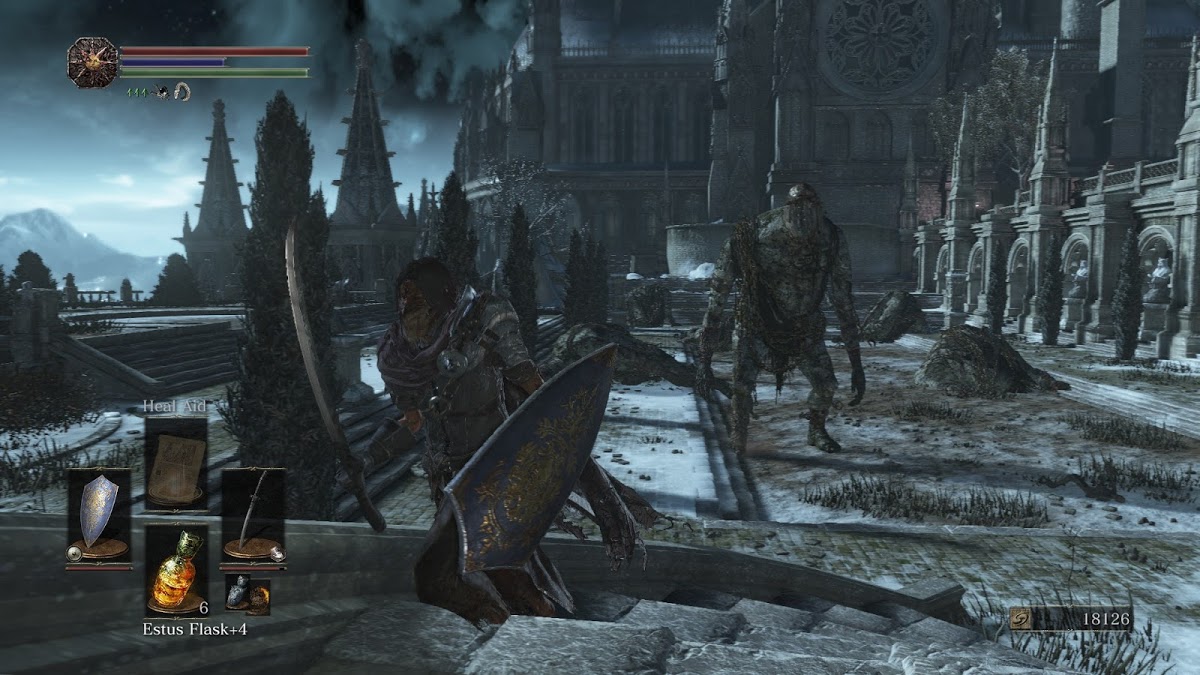 So time to head forwards, into the next “church”-like building, up some stairs and… Fuck me.

Allow me to paint a picture: You’re running across some ramparts, feet skipping across the tiles, daftly avoiding tripping over or falling to the sides. And then a giant arrow comes swinging by, smacking you in your chest and you fly over the edge and die.

Thankfully, I didn’t trip over, but it was damn close, as these two (no, three!) archers were shooting at me. This game isn’t kind. Don’t know if you knew that. 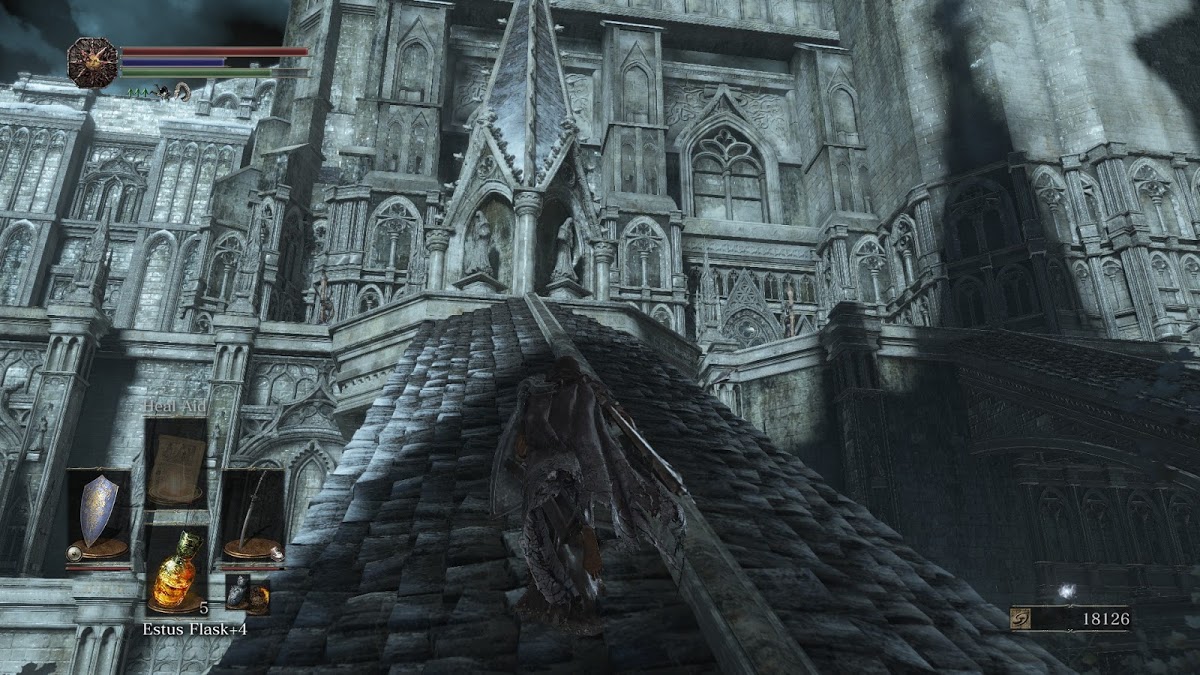 They're a bit hard to see, as they camouflage against the silver building, but they're right around the middle to the left and the right. There’s a third one just to the right as well. Yup.

But I get up there, sprinting past the arrows, and take care of one of them, before finding myself in a blissful situation: 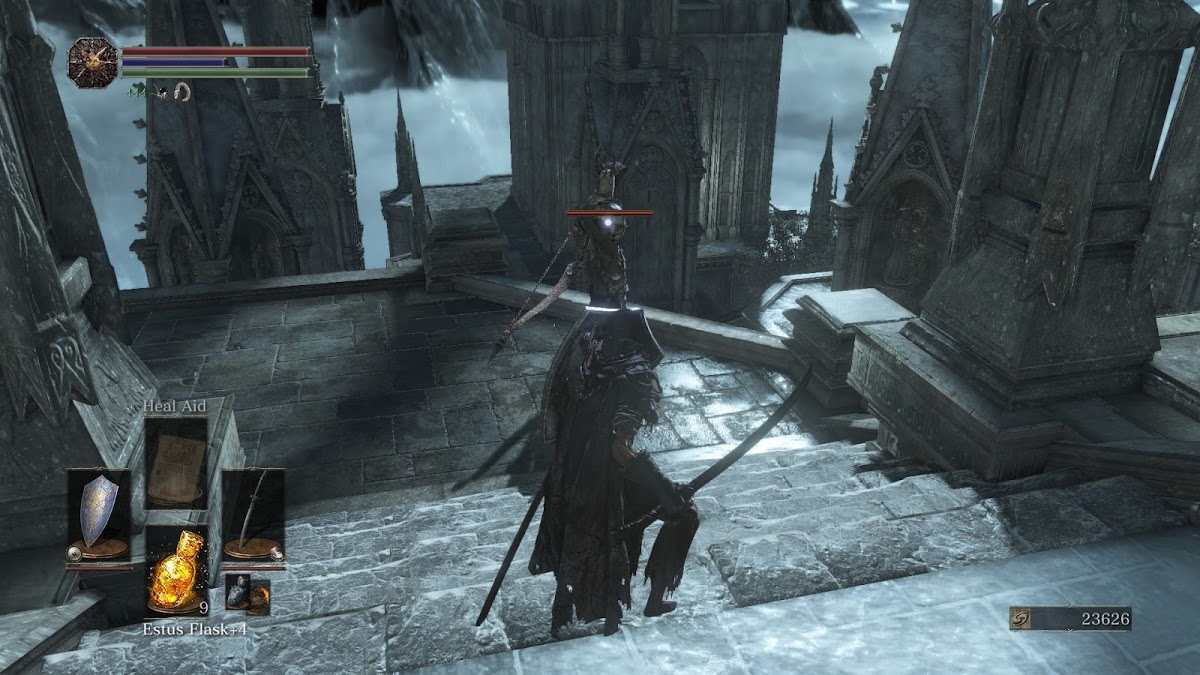 He somehow forgot about me. What luck. Sneaky, sneaky, sneaky, I sneak up on him, backstap and wham, hit him right in the back, he goes flying off the edge, down to his eventual… 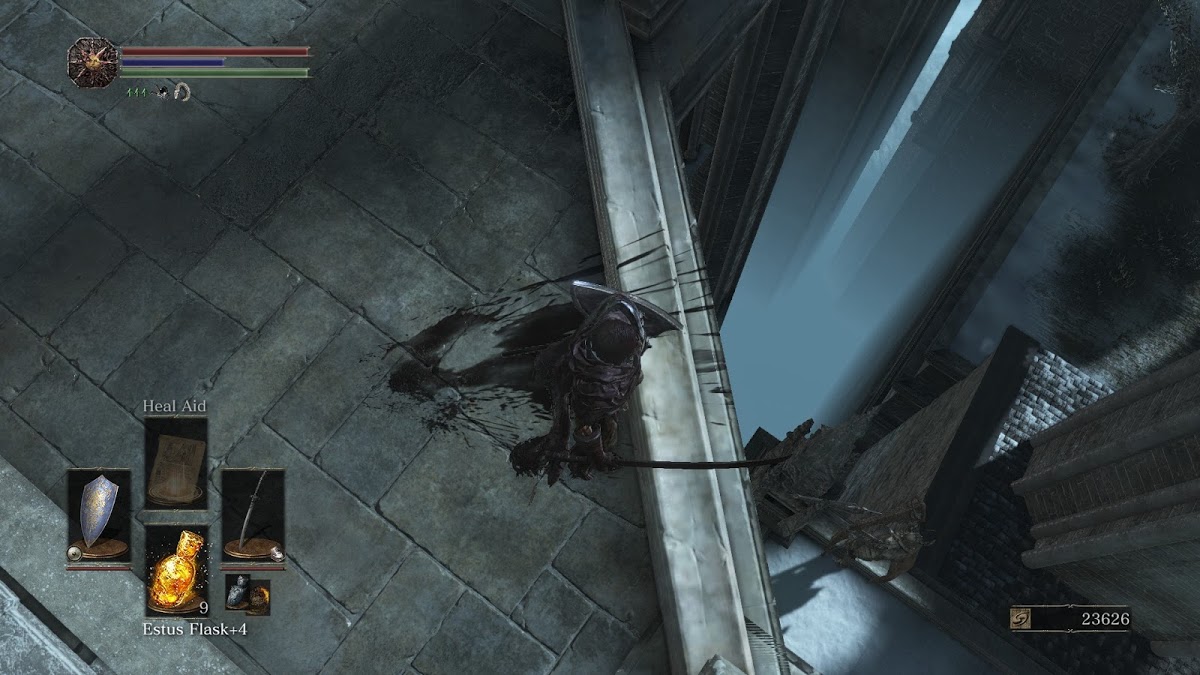 …safe spot. Damn. Now he’s just standing down there, shooting towards me. Continuously. Hitting only walls. Think he’s mad. But you know what? I let him live, because he deserves that much, surviving my sneak attack, like that. Won’t do me no harm either, as he can’t hit anything from down there.

I turn around and go inside the building, having a strange déjà vu already. See, there was an area in Dark Souls that was exactly like that as well, two archers standing at the end of a thin archway. But turns out, that was just the beginning of those types of callbacks. Because inside I see this: 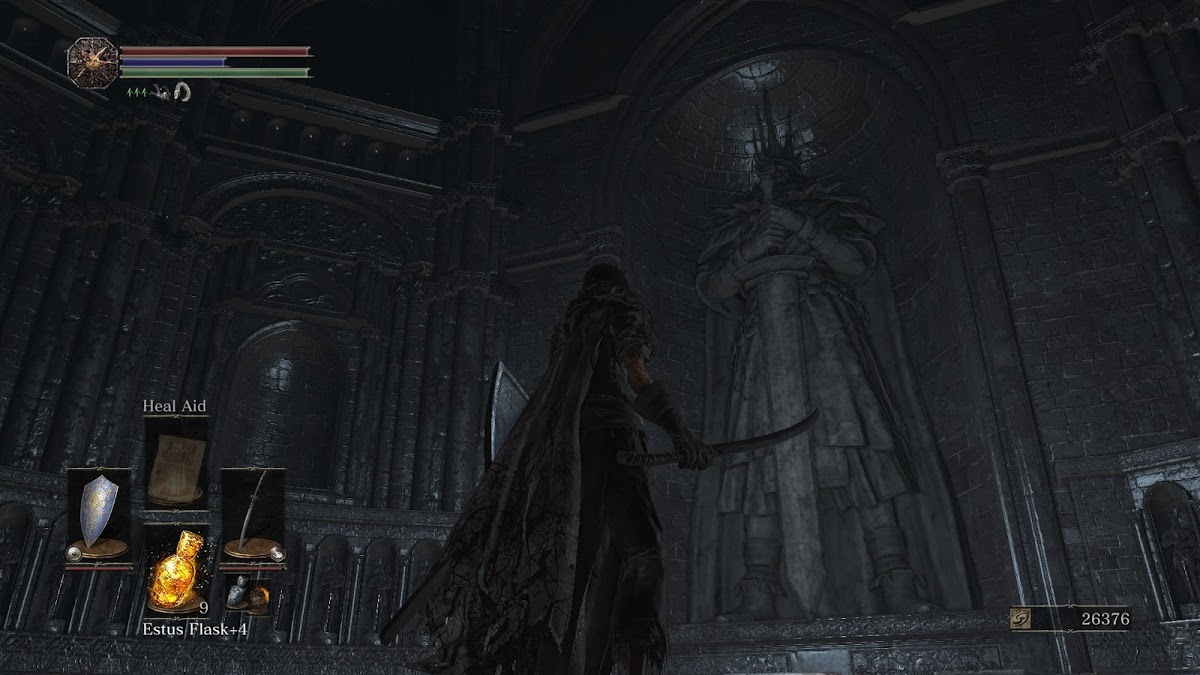 The statue of an old God. And not just any old God but the God from Dark Souls: Gwyn, the Lord of Sunlight. There was a statue just like this one in Dark Souls (actually there were several) and on the ground lay several messages from other players, all saying something equivalent to “secret path behind”. I hit the statue and it disappears.

Then my jaw drops. Behind it, down a short staircase, like a carpet with four candles. Insignificant to you, maybe, but I’m suddenly, looking into the hallway ahead, I realize I know exactly where I am. In Dark Souls, there was a hidden path very much like this one, and if you were got behind, you found the longest hallway in the game: An illusion set up by a boy dressed as a girl named Gwyndolin (Gwyn’s son). Gwyndolin attacked you on sight, and killing him brought the illusion to an end. Now, here, in Dark Souls III, the illusion is long gone, and all that remains is a hallway, and distant, grey fog. Inside is the corpse of another character from Dark Souls, an old Firekeeper dressed in recognizable brass armor, and Gwyndolin’s old ring. 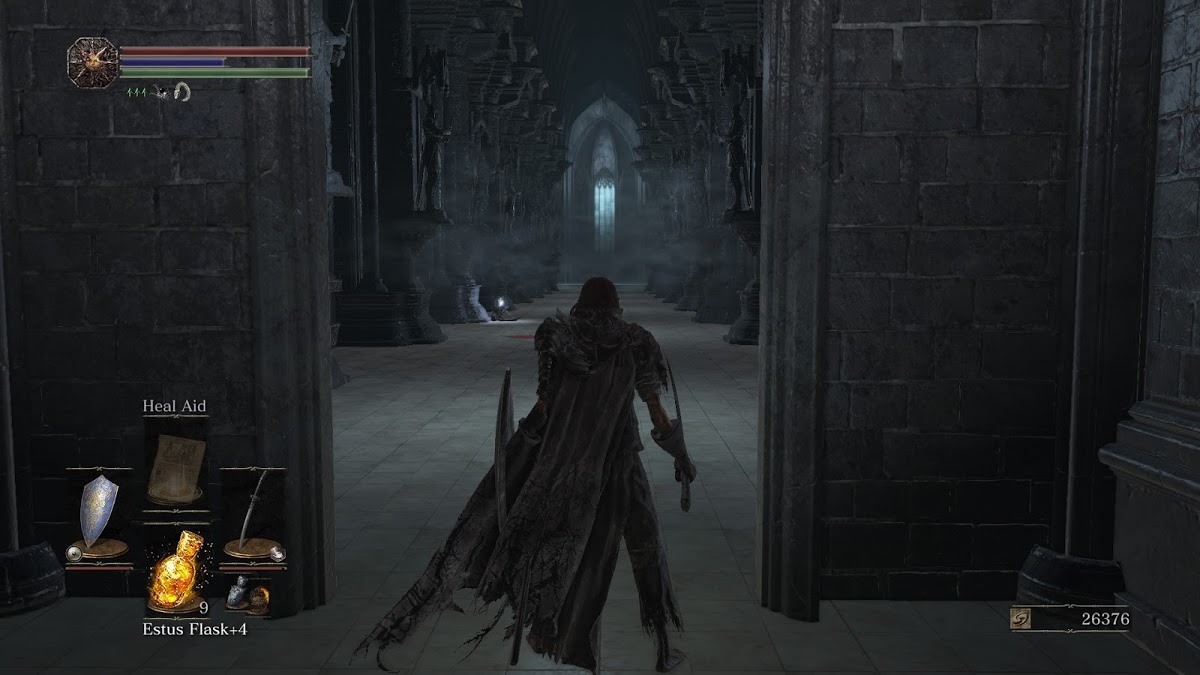 The no longer longest hallway. But it's still pretty long.

It’s a dead end, much like it was in the first game. But that’s when I realize that the hints are not placed here by random at all. Because outside, the other way, I find a lever, pulling down this large contraption with a spiral staircase inside, which I can control to go up and down. I get in, go up as high as I can and see my next destination: 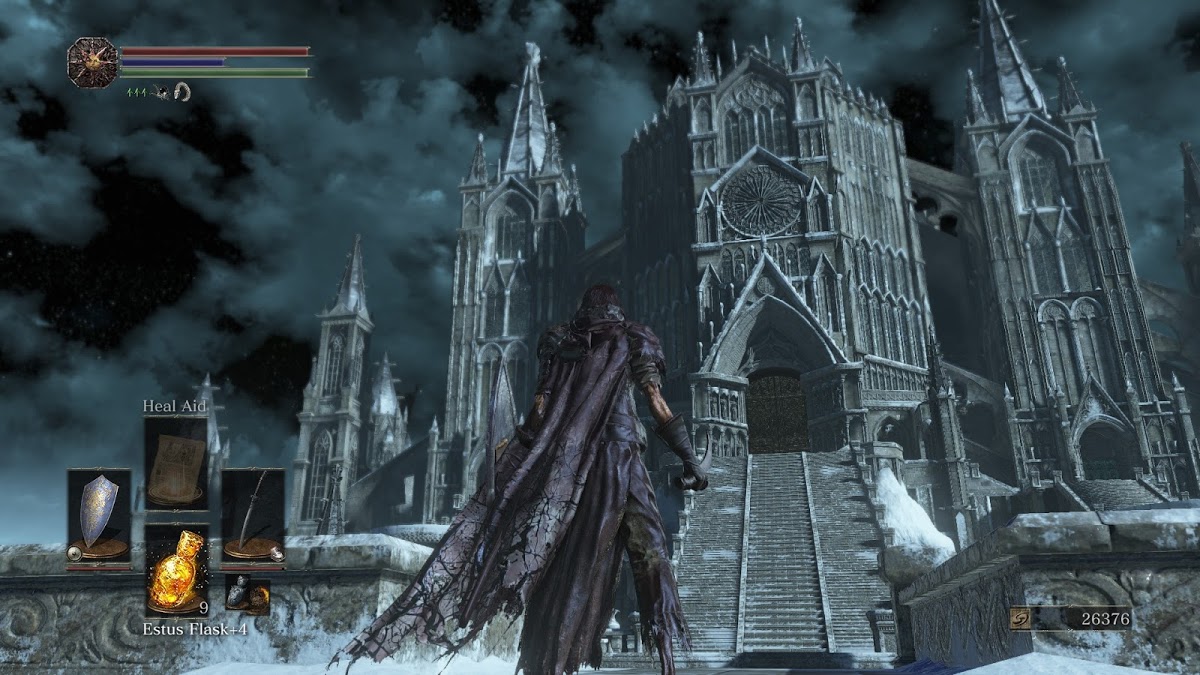 In the old game, the sun over the Cathedral was an illusion too. Now, it's covered in eternal night.

Yup, the most recognizable building from the original game: The Cathedral in Anor Londo.

I went into the Cathedral as well, but I better stop. But suffice it to say there’s more great, great design happening in there, as well as some brilliant subversions of what one would expect in that church, having already been there before. 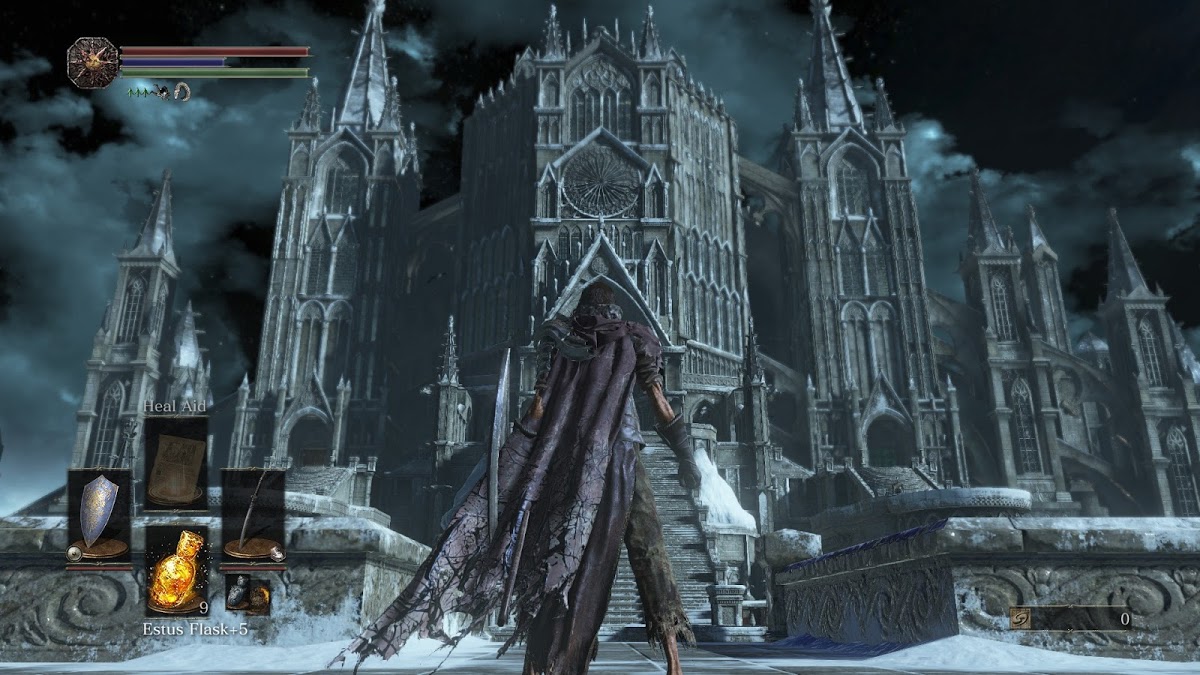 Just look at that cloak! Argh.