I’ve been playing a lot of this in my recently achieved vacation, so it made perfect sense to just continue with it for an hour more. Not promising that this is the most exciting hour, though.

I guess if you’re super spoiler-sensitive, there’s spoilers for Vault 81 and early game. But not like anything big. 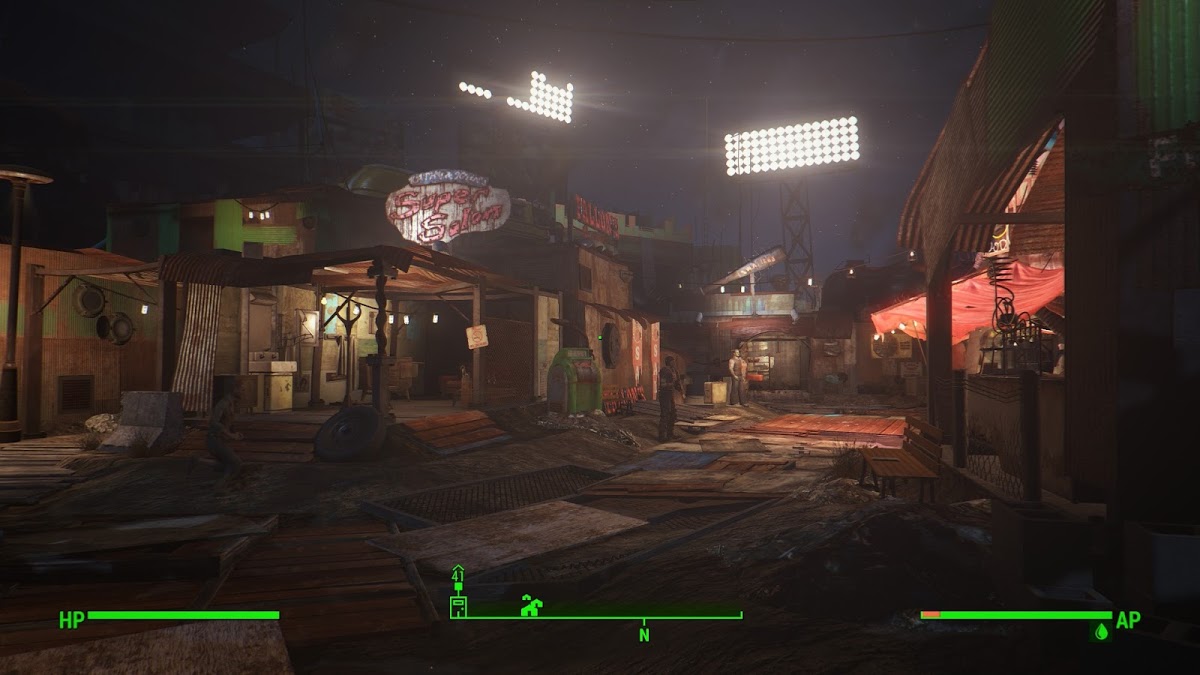 Diamond City: The Green Jewel. The Center of the World. Fenway Park. Otherwise, not that impressive.

I wake up in Diamond City after a quick sleep with a mission: The innkeeper has been kidnapped after some bad deals with the wrong people, and I’ve agreed to go rescue him.
And to elaborate further, the local radio host, whom we’d been helping gain more self-esteem by putting him through a few trials wanted to help too, since the innkeeper was one of his only friends. Aw. Except, of course, this is Fallout, so the way he helps is by going and shooting up a bunch of raiders. 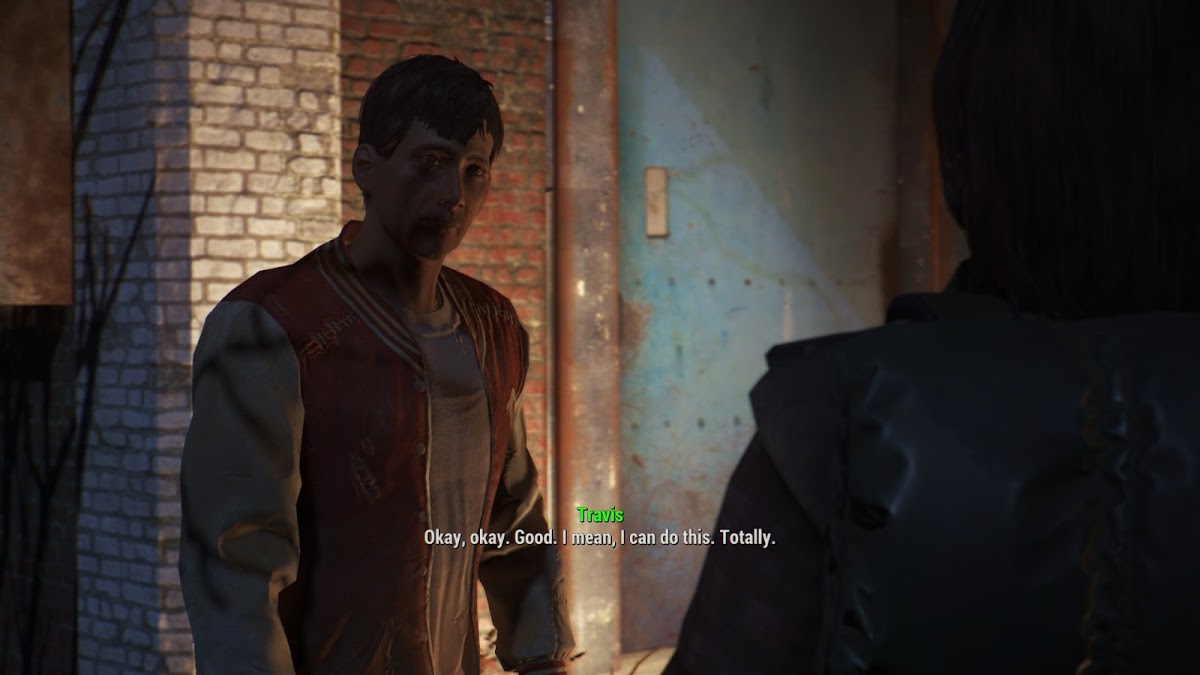 They’re stocked up in an old brewery a bit out of town, and I meet Travis (the radio host) there, and we sneak inside.
Carefully, we sneak hits in on the unbeknownst raiders and manage to clear them out without much trouble. We find Vadim (the innkeep) and free him, to much gratitude.

Afterwards, I share a word with Travis, who says he’s really gotten some perspective and sees how silly all his worrying was about going on a radio when there are people out shooting every day.

So, mission accomplished? Given him a little confidence boost. You know, with violence. It solves everything.

They leave, but I stay around and scavenge through the old brewery, gather up a lot of bottles and various artifacts. Just as I think I’m done, a lone radroach (big, oversized cockroach) sneaks up on me. Not a threat normally, but he gets one hit in and infects me with a disease.

Crap. Diseases are tough, since they can only be cured by Doctors in settlements, or Antibiotics, which are really hard to find. And especially this one is a problem, since it slowly chips away at my health, little by little.

And I can’t just fast-travel back to Diamond city and get it over with (Survival difficulty). 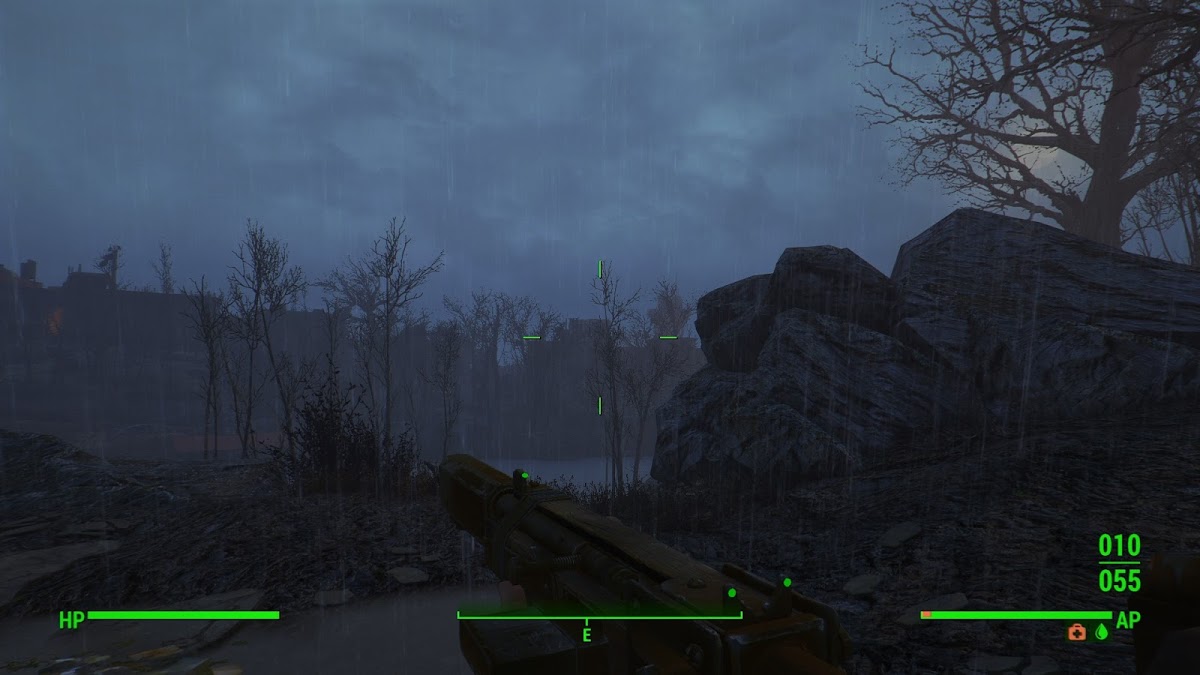 But whatever, I’m fine, I had another thing I wanted to do: Vault 81.

It’s a rare thing because Vault 81 is a surviving, active Vault. With people and everything! However, they’re unsurprisingly a bit picky about who they let in, so in order for me to enter, they wanted me to trade them three Fusion Cores. That was, at the time, an exorbitantly high price, because I’d only ever found two total the entire game, and they’re a pretty necessary resource. However, randomly, I yesterday stumbled across an ammo cache with four (four!) Fusion Cores inside.

So I travel through the (now rainy) Commonwealth and get to the Vault door.

The Overseer, happy to hear I got what she asked for, opens the door and I can step in. 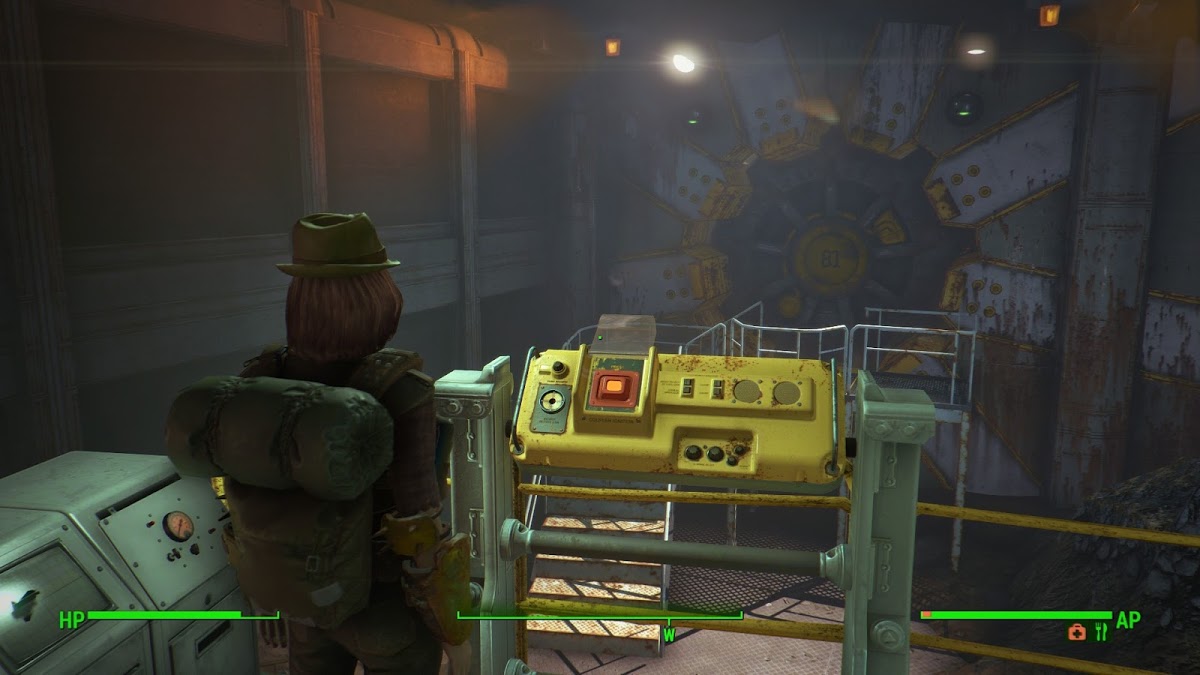 I've got a backpack and a swell hat. Gotta look presentable for my first meeting with the Vault Dwellers.

It’s a pretty momentous moment for my character since she’s never seen a living, functional Vault. She was cryo-frozen as soon as she entered hers, back in the beginning of the game. So time to see how these things really look.

I go in, clean as a whistle and they greet me with mixed reactions—some are happy and curious to see a new face, others are obviously suspicious of outsiders. 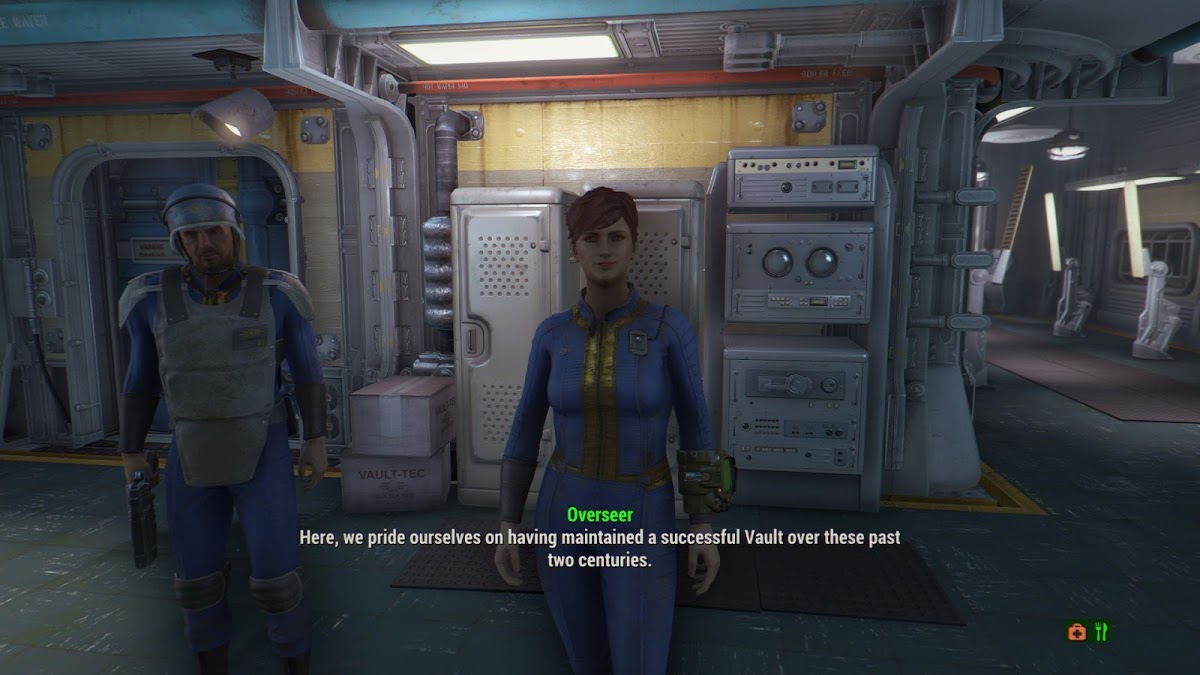 I walk through a Radioactivity check, and am pleased I happened to cure all my Rads yesterday, so I proceed through that cleanly. However, then I realize what I’ve just done is bring an infection, one they’ve most likely never experienced, to in insular, uncontaminated Vault.

If this was real life—and the disease was contagious—I could have killed everyone in there.

Thankfully, this is just a game, and the simulation doesn’t go that far.

Instead, a little kid runs up to me excitedly and wants to give me a tour of the
I accept. And all the time I hope I find a doctor here, because my health is slowly ticking down.
He proceeds slowly, through the depot, cafeteria, school, offices, etc. until finally we stumble upon a clinic! I abandon Austin and sprint in, ask the doctor if I can be healed, but no, no. He wants to take a blood test. Blood test?!
So I accept, ladida, sit down, he stabs me with a needle, I hurry along and then, finally I can get cured from my disease. 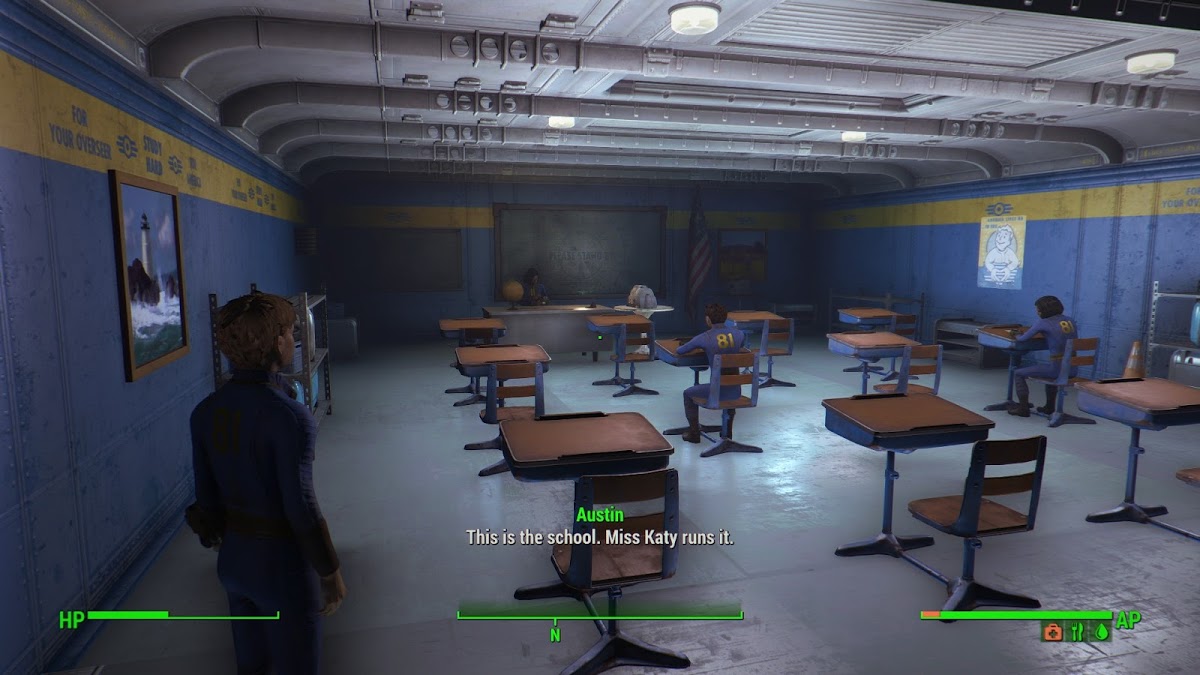 The school. Austin is there to the left.

Free at last, I proceed around the Vault on my own, and find their little petty dramas to get involved with or not. The school teacher wants me to tell the kids stories from the outside world. A kid has lost her cat and wants me to find it. Two siblings are at each other because one of them is a drug addict and the other doesn’t want to get caught selling it to him.

You know, normal, day-to-day life. Not like me shooting raiders to give a guy a confidence boost. 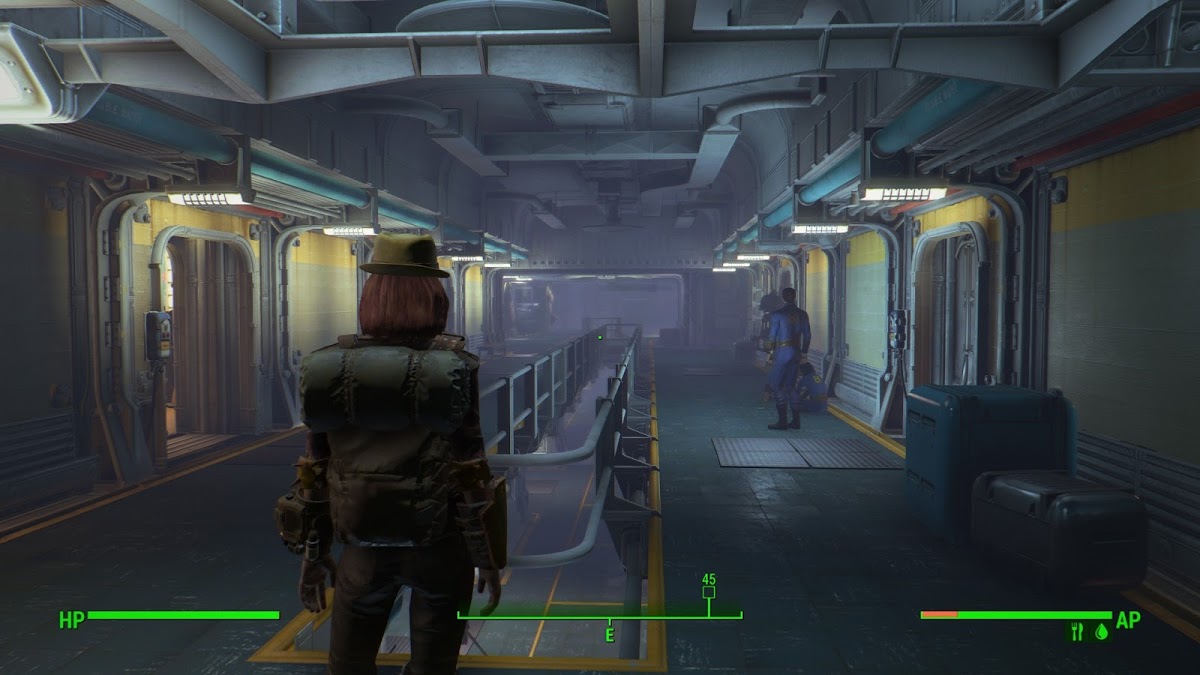 That’s it! Not the most… action-packed episode, but I think that goes to show that action is rarely what works best with these things.
There won’t be a Sunday Morning Game next week as I’m away, but I expect it’ll happen pretty regularly over the summer otherwise!