[One game, one hour. Every sunday.]


Blendo Game’s Flotilla is my next foray into the world of dormant steam games I should have played a while ago. It's a roguelite space game (like FTL) with simultaneous turnbased combat (like Frozen Synapse). And made by the guy who made Gravity Bone and Thirty Flights of Loving. Sounds pretty neat, no?


Let's figure out what's going on here. I venture in and is greeted by a prompt to start my first adventure—my first of many, it would seem to imply.
You have seven months until you die, it says. Why don't you spend them going on one last adventure?
All right then. Sounds like a splendid idea.

A swinging cowboy guitar sets me into the tutorial, where soothing piano explains the battle system in easy, slow tunes. I immediately realize that this isn’t just a straightforward point-and-shoot gallery.
My ships need first a horizontal movement direction, then a vertical one, then finally a look direction. The latter turns out to be all important as ships’ front armor is impenetrable to the enemy’s weasly missiles, but the rear and bottom are weaker.

A slow dance begins and I order my ships to flank and shoot, trying to get the better of my single tutorial enemy—who has the same strengths and weaknesses as I do.

I win and applause roars up at me. I feel gratified and ready to tackle the next many challenges. This doesn't seem that hard? 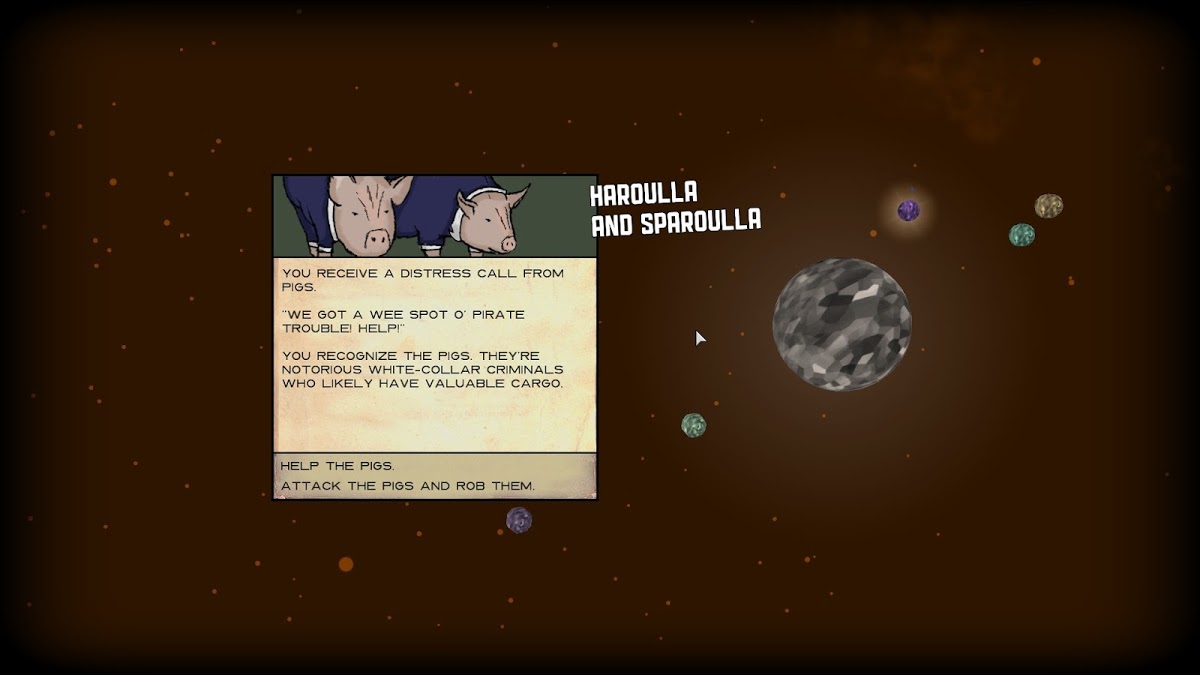 I travel to a new planet where the first thing I hear is a distress call from pigs. They are being attacked by pirates. I get a choice: Help or attack the pigs themselves. After pondering their attire, I rush in to help them… 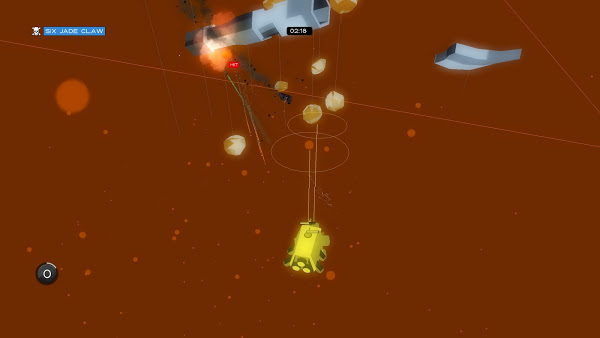 And that was the end of the adventure of the ships “Three Tailed Ray” and “Six Jade Claw.”
I got decimated by the pirates. Game Over.

Worried that this space adventuring life might not be for me, I steel myself for a second attempt.

I spot an alluring celestial aura, but my men warn me that it is dangerous and I steer clear.
Instead, assassins ambush me at the next planet. I curse and head into battle, fearful that the outcome will be the same.

I take a breath when I see my enemy: Two ships of the same class as mine. This is doable. 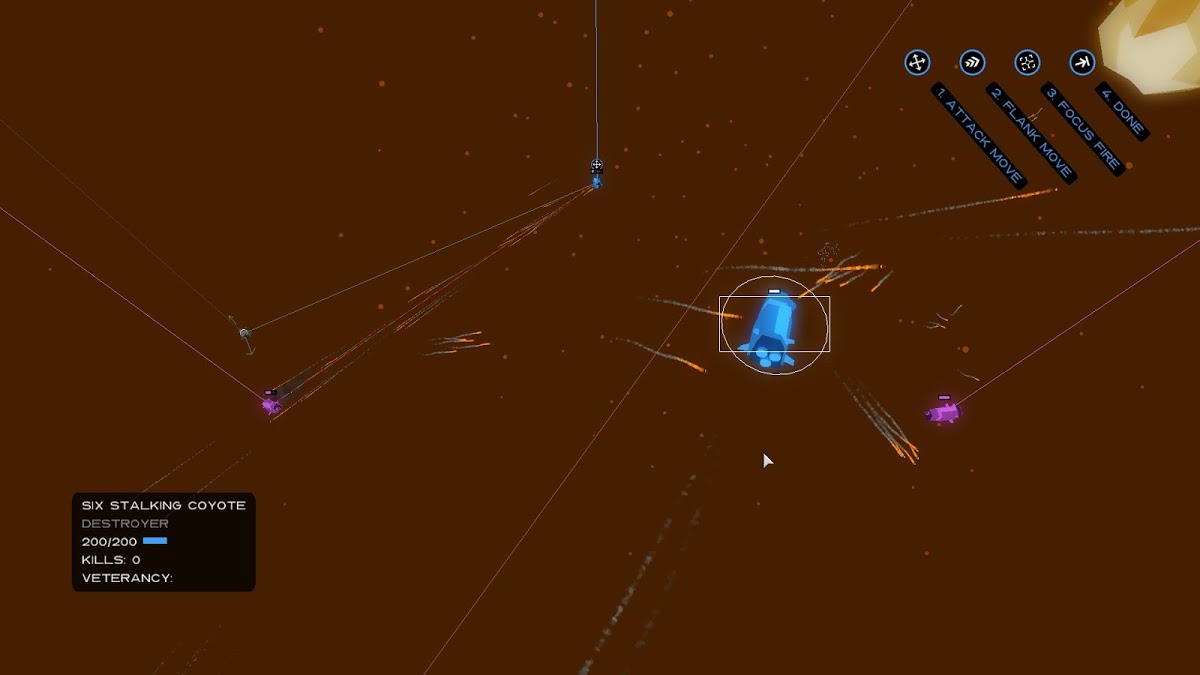 My ships are blue, theirs are purple.

I try some evasive maneurvering in the beginning, but my enemies stride headfirst, shooting missile after missile at me. My first vessel “Four Jog Lizard” almost goes down, but I manage to steer him clear of the final strike. With “Six Stalking Coyote” in their crosshairs, I know that I need to maneuver carefully to not just lose her instead. She goes down low too, but I keep them out of range, taking careful potshots at the two destroyers. They slowly lose health, my ships at their absolute last breath, Four Jog Lizard stuttering along with engine problems.

But I strike and hit! The first enemy goes down! And the other is low on health and an easy target all by itself. 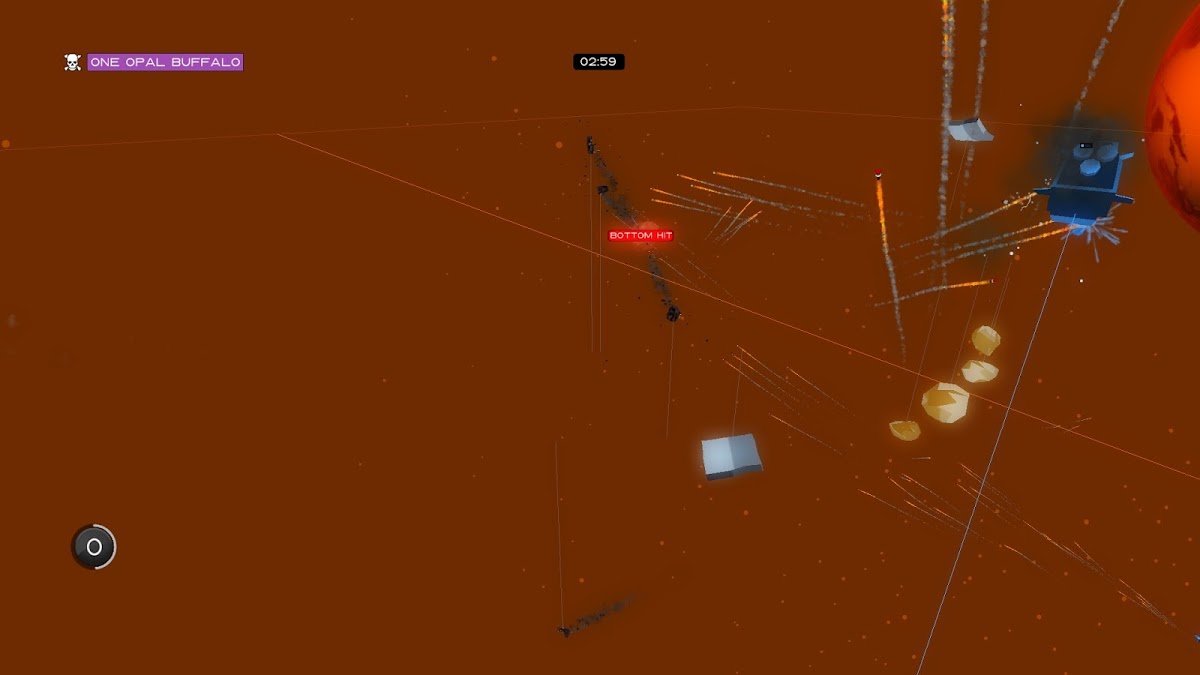 I sigh in relief. A first victorious battle. 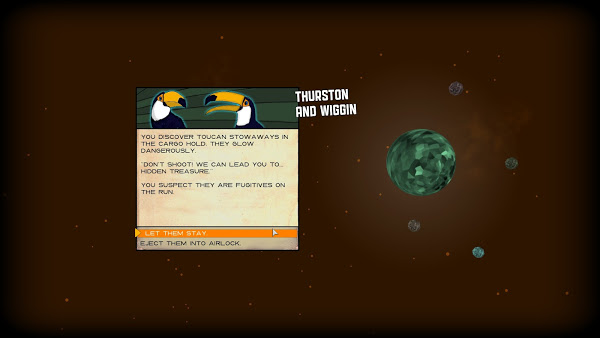 Toucans?! Sure, come along! The more the merrier, or something.

Out into space again, I stumble across some Toucans claiming they can lead me to hidden treasure. I doubt them but bring them along for now. They’re only toucans, what harm can they do?

After karaoke on a distant planet and other diversions, I hit upon a checkpoint of uptight space deer, who claim I have a Bruja infestation on my ship. I have no such thing, but they are adamant to eradicate me. I ready myself for battle once again.

Then I see their ships. They have a battleship. Fuck. I don’t even know what a battleship can do, but it sure doesn’t sound good. 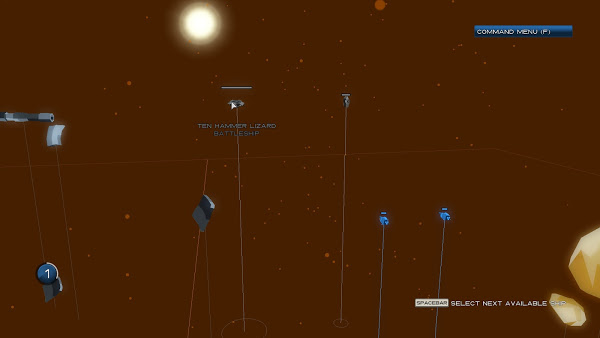 I begin the battle to the best of my ability, straying out of range of danger while taking careful shots at my enemy. The support ship is faster and dumbly leaves her ally behind, and I manage to surround it, out of range of the battleship.

Then onto the real challenge. It shoots projectiles and torpedoes at me, and I do my best to avoid or block many of the shots, afraid to get hit even once.

However, then I notice the winning strategy: My missiles outrange her torpedoes! It’s not by much, and it requires careful positioning, but just that little edge makes me confident.

A long, grueling battle takes place, me constantly staying just out of range, balancing danger and a chance to hit, until I bring the large ship down.
Another victory. 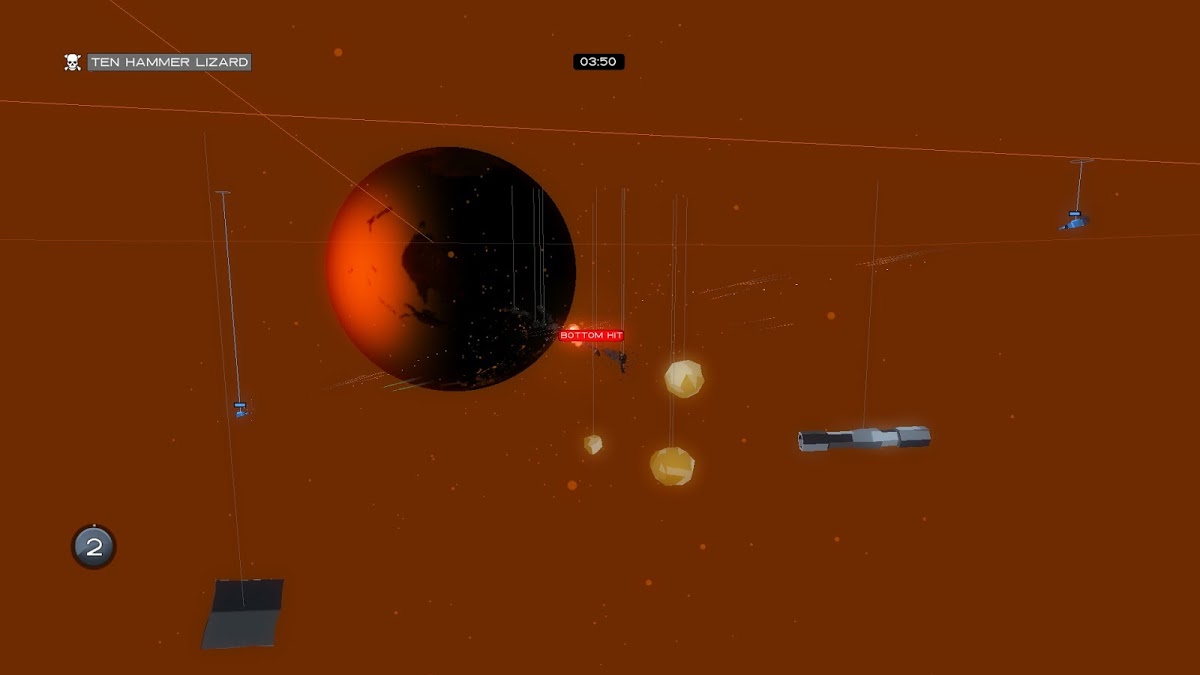 Bam! I'm actually fairly proud of that one.

I fly away to safety, still avoiding the scary red planets—because red is obviously bad. I find some hitchhikers who leave two planets earlier. I’m pleased to see them venture off without causing trouble in my ships.

When I hit the next planet some assassins hit me again, but offer me a deal: Give them the toucans and I can walk free. Weary after the last battle I decide to give in to their demands. I don’t know if it was a good idea but alas, it was done.

Before my adventures could be at an end, though, the bloody space deer had to strike again! They demanded a tribute of some of my cargo otherwise they would attack. I say, fine, okay, I have some leftover armor I’m not using. But no! That’s not what they take! Instead, the scoundrels steal my best armor that was already equipped onto “Six Stalking Coyote”! What the hell?! They could have warned me first.

Furious, I scurry away, and thus, right before some happy-go-lucky scientists and some more karaoke grant me two(!) extra spaceships, I retire from adventuring, old and accepting of what I have accomplished.

My flotilla was at its end.

PS: there actually was an Adventure 3, because my hour wasn’t up when adventure 2 ended, but this was already long enough, so I decided to cut that out. You can see the game’s recap of how far I got here: 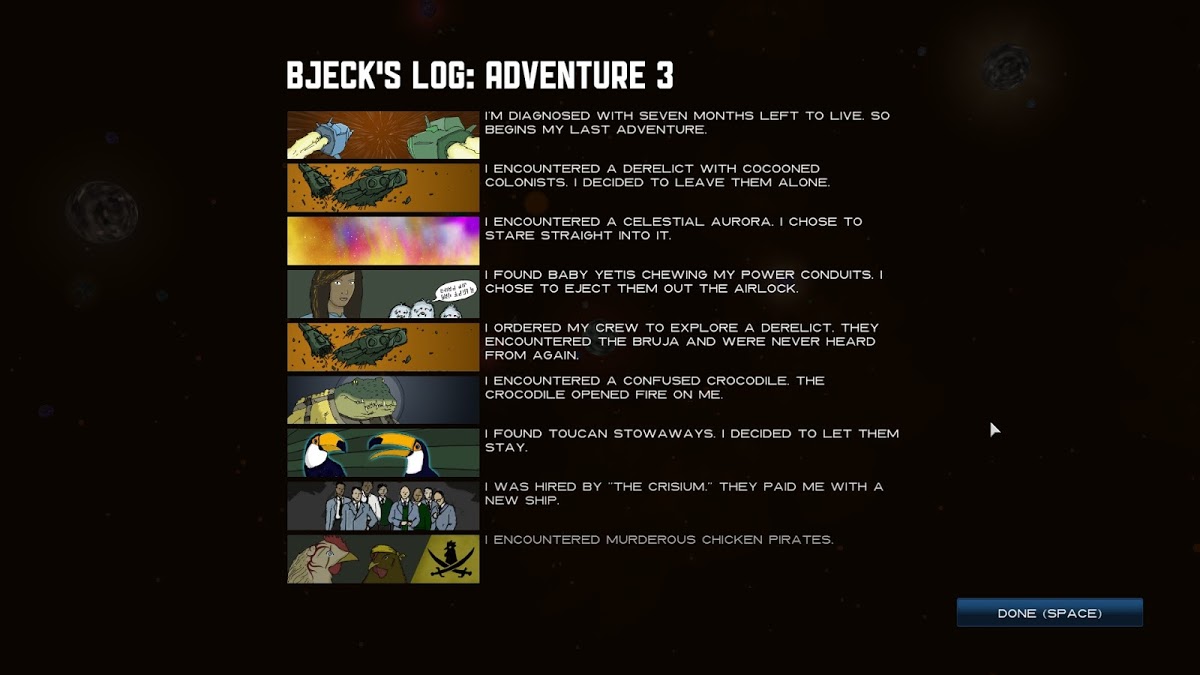