I assume most of you already know what GTA is, at least from hearsay, word of mouth or whatever else the media or friends may have told you.

Right now I’m going to do anything but that.

I’m going to spend an hour in Los Santos (the city in GTA V) as a tourist. That means I’m not allowed to do anything illegal: No carjacking, no weapons, no breaking traffic laws, nothing. Just me and the streets. No idea how this is going to go, but here goes.

We start off with Franklin, driving down from his home, to see the first attraction: Del Perro Pier. It’s close and easy to get to, so let’s do it. 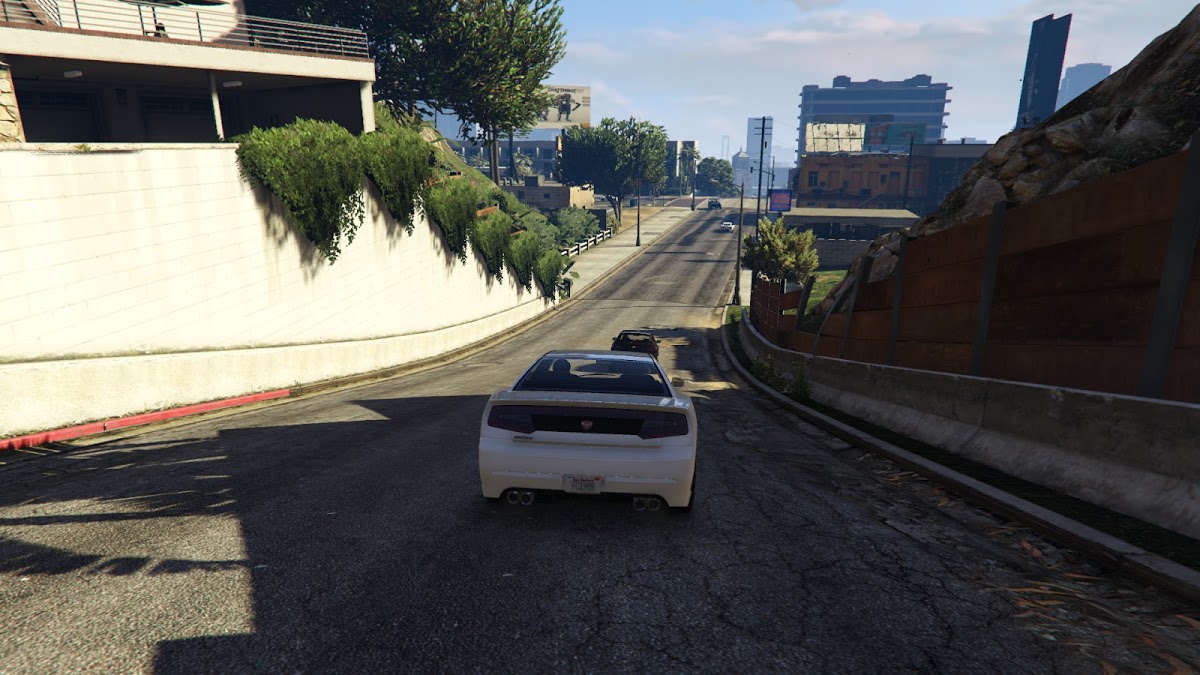 That’s right. No HUD. 'Cause life doesn’t have a HUD, son.

Oh and by the way, the car’s fine. That’s Franklin’s car. He starts the game with it, so it’s perfectly legal. 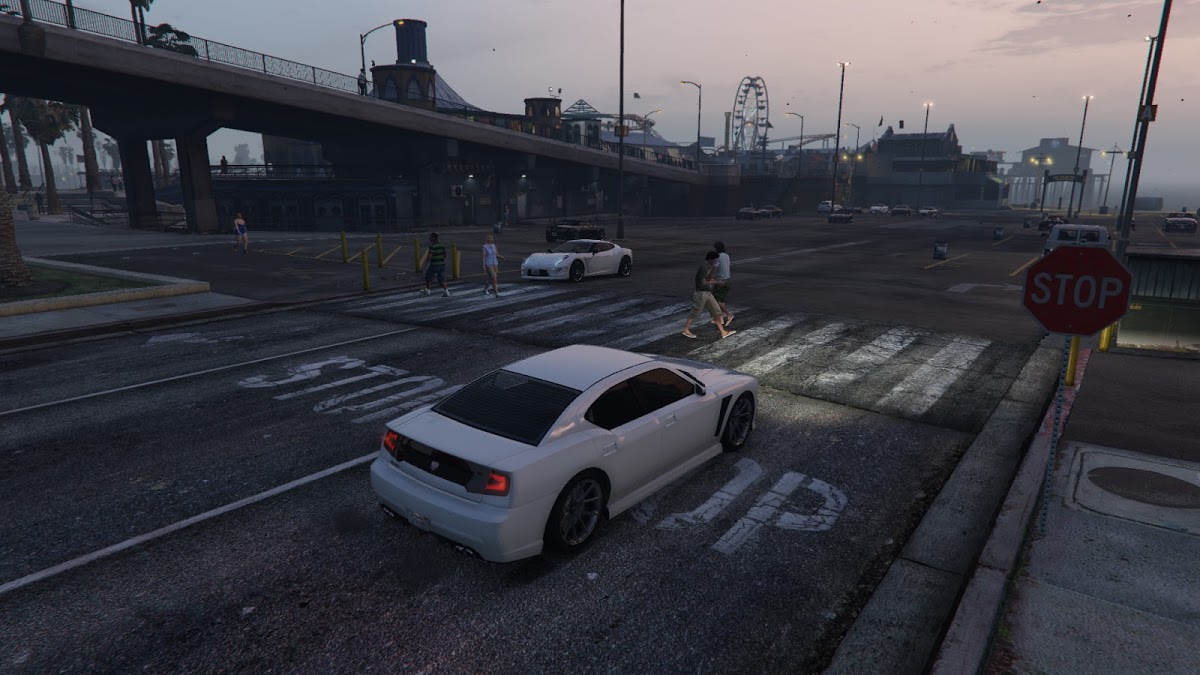 The Pier's there in the background.

As I drive down, the sun slowly sets over the streets, and I try my best to stay on the road and stop at red lights and the occasional pedestrians.

I walk out and greet the local Jesus Jesse who’s spouting something about people not understanding but I move on, down the pier, glancing at the stores, the arcade games lined up among the badly hidden trash on the wood boards of the pier. I stop by an ice-cream stop and take an obligatory selfie with the Ferris Wheel. 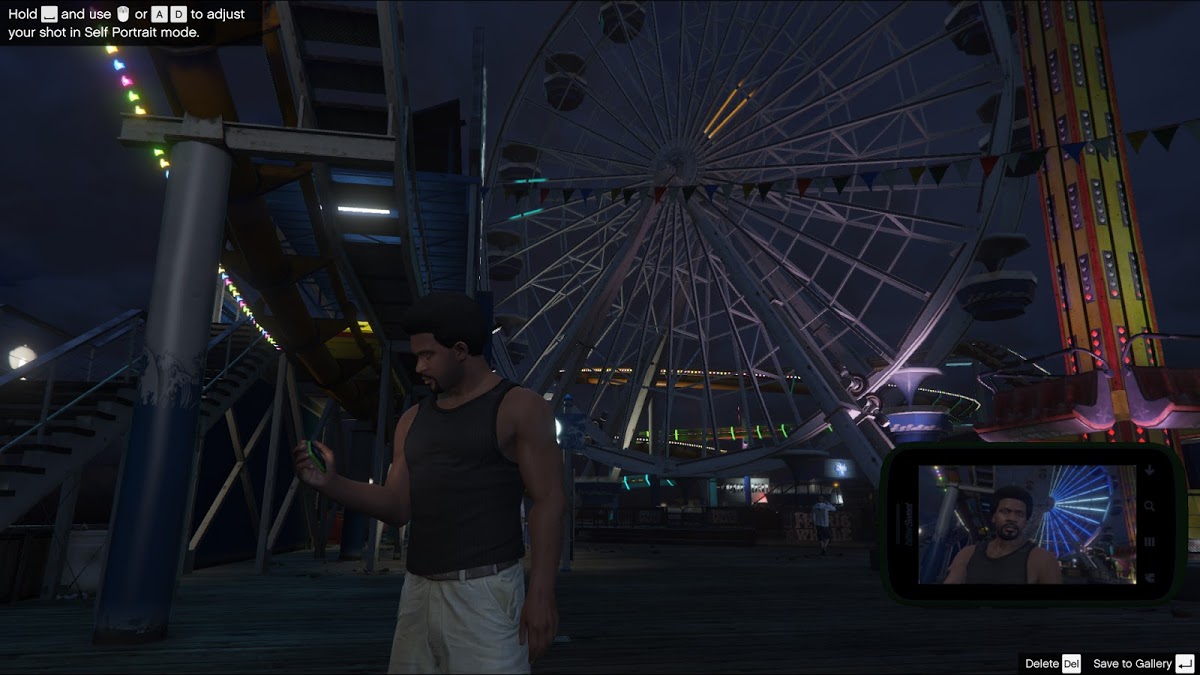 Oh, and of course I gave Franklin an afro. 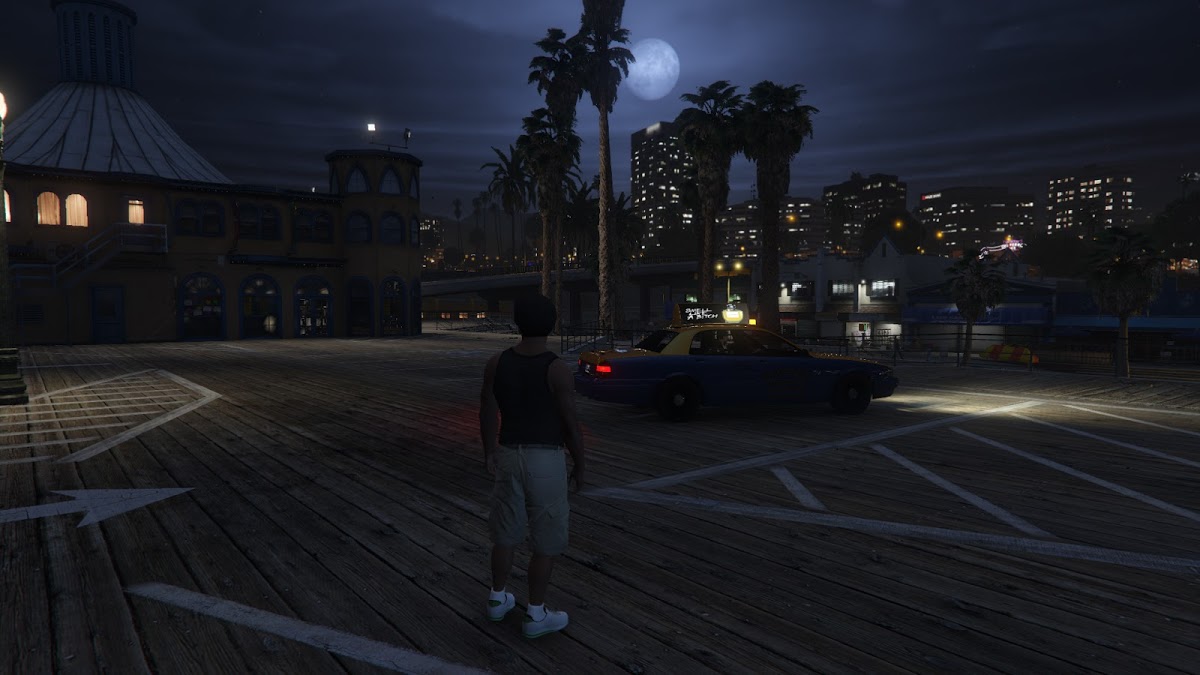 There you are, don't drive away now.

I walk out the end of the pier, which I realize is quite a bit away from where I left my car. So what the hell, it’s boring if I just use that one car all the time anyway: So I call a cab. 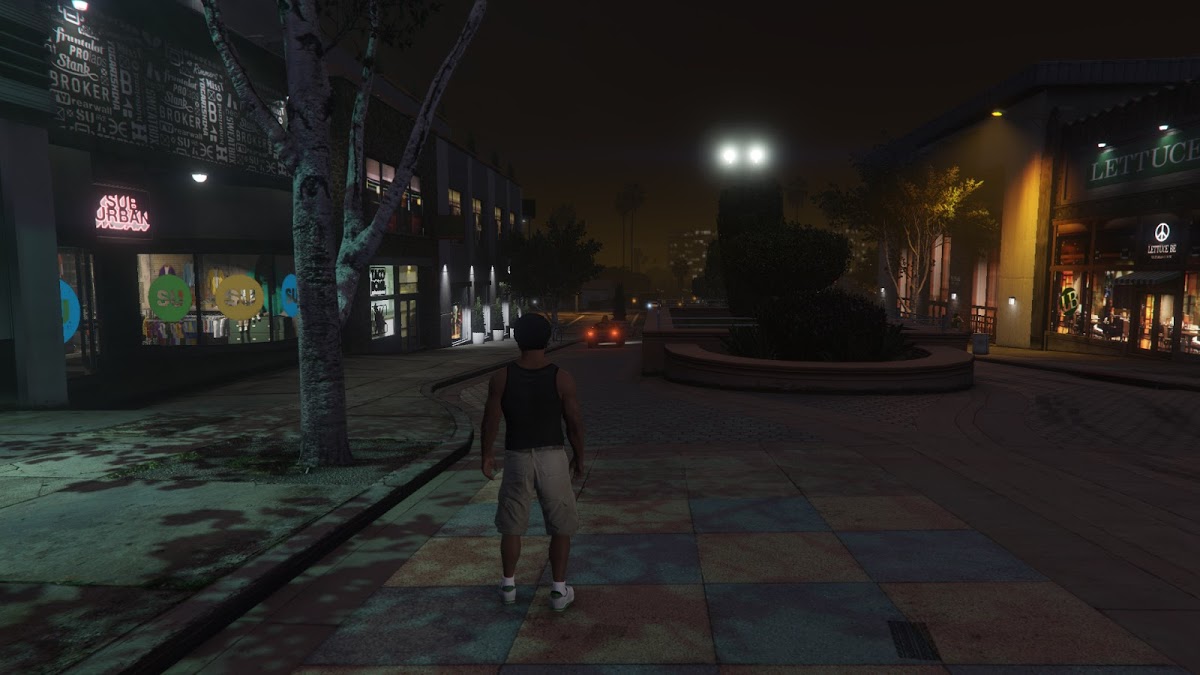 On my way out some people yell at me, and I realize I can only really blame it on how I look: Afro and a black tank top. I mean, that’s bound to get some stares? (?) So, the cab arrives (in a super roundabout way, first driving past me, around the block a second time, then stopping in front of me), and I tell it to go to the nearest clothing store.

It drops me off at another iconic location, though. Bonus! Don’t know what it’s called but it’s the shopping street in Del Perro, which has quite a recognizable look because of the small green areas in the middle.

I take a gander inside the clothing store and decide to go full tourist: 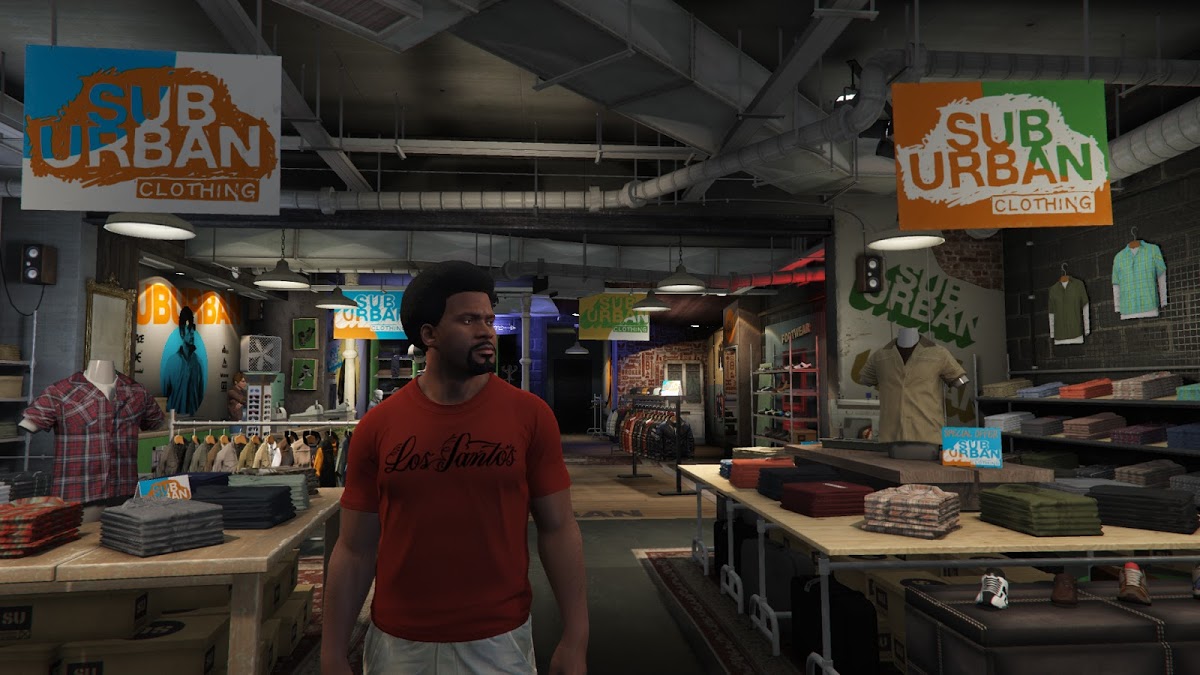 Ah, of course, there’s only one option: The Vinewood sign (The Hollywood sign). What could be more iconic?

But… how to get there? I could just take a cab, but, nah let’s do something more interesting. Let’s buy a bike.

So I venture onto the internet on my phone (all in the game) and buy a bike. Shortly after I get an email that it’s been delivered to my garage. 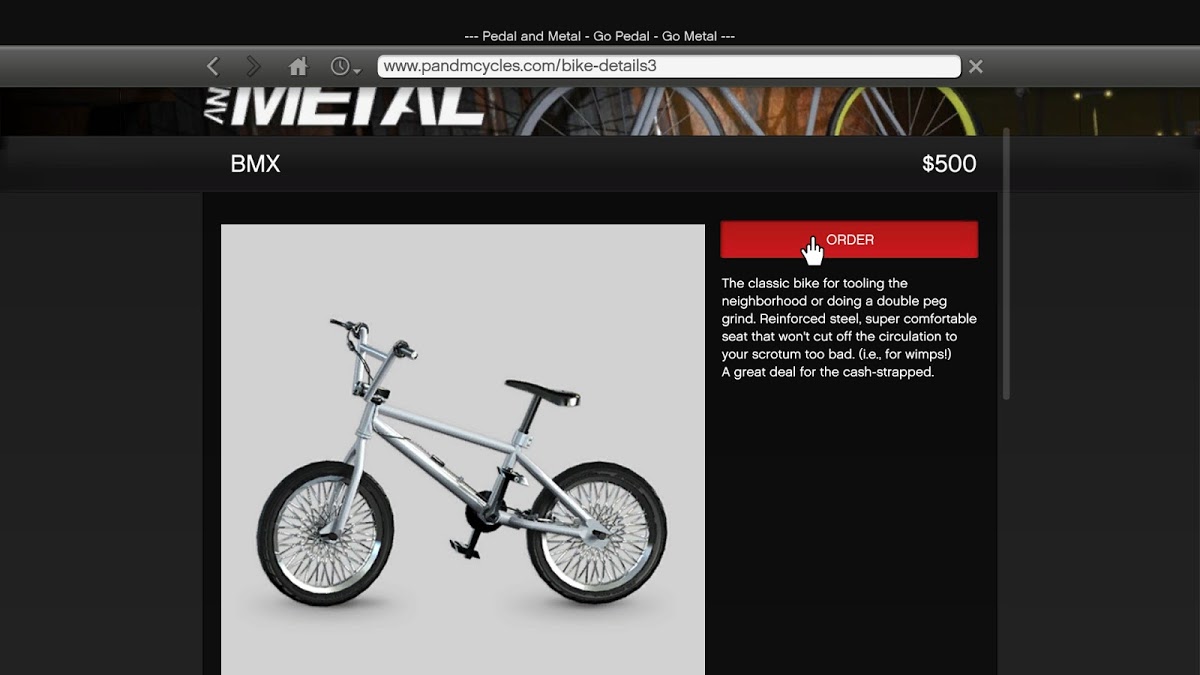 Only problem: I’m nowhere near my garage. It’s all the way down in Davis, halfway through the city.
A cab?
No.
I take a look at the map to find the metro line. (This time, the actual, physical map that comes with the game, since that shows the metro line), and realize that there’s a metro station right next to the garage! And there’s another one like 5 blocks away from where I am. Cool.

I walk (run a bit) there, and on the way something happens that I’m just going to present in image form: 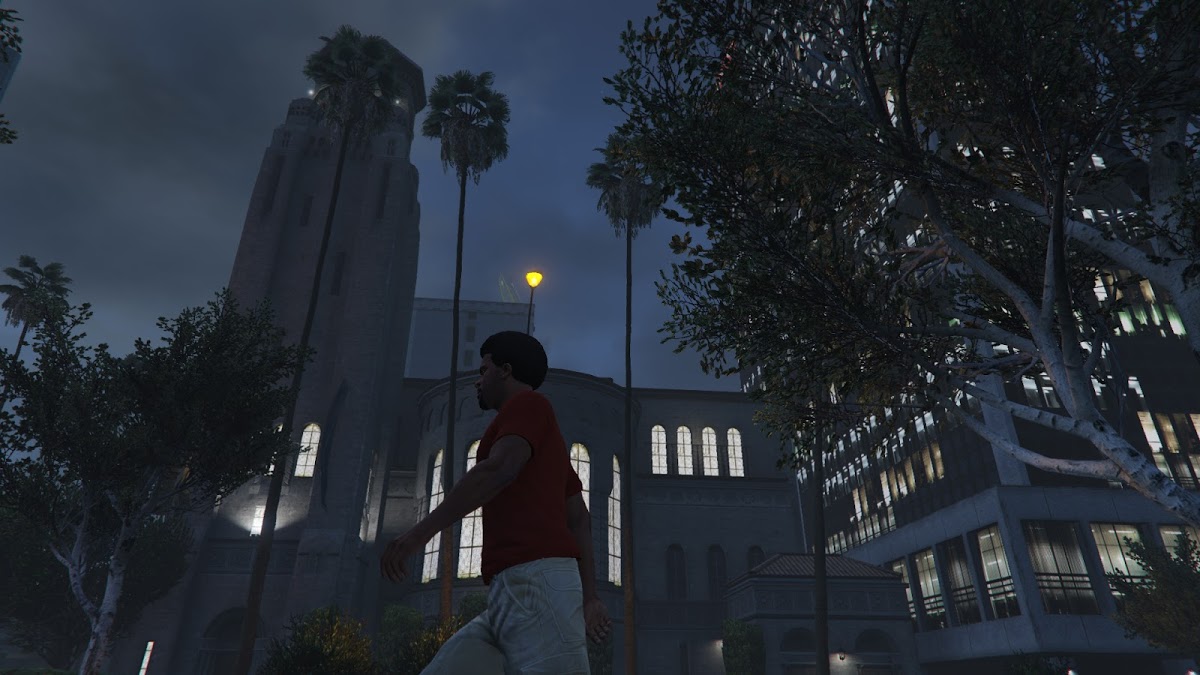 Walking by a church. It's morning again! 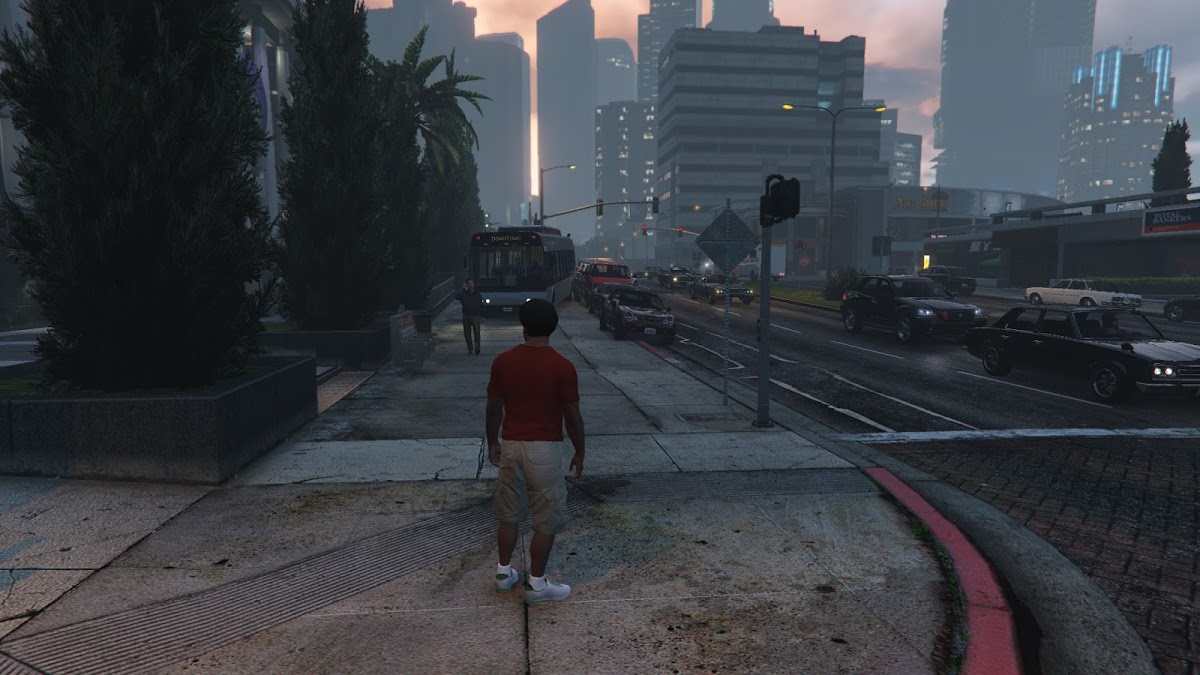 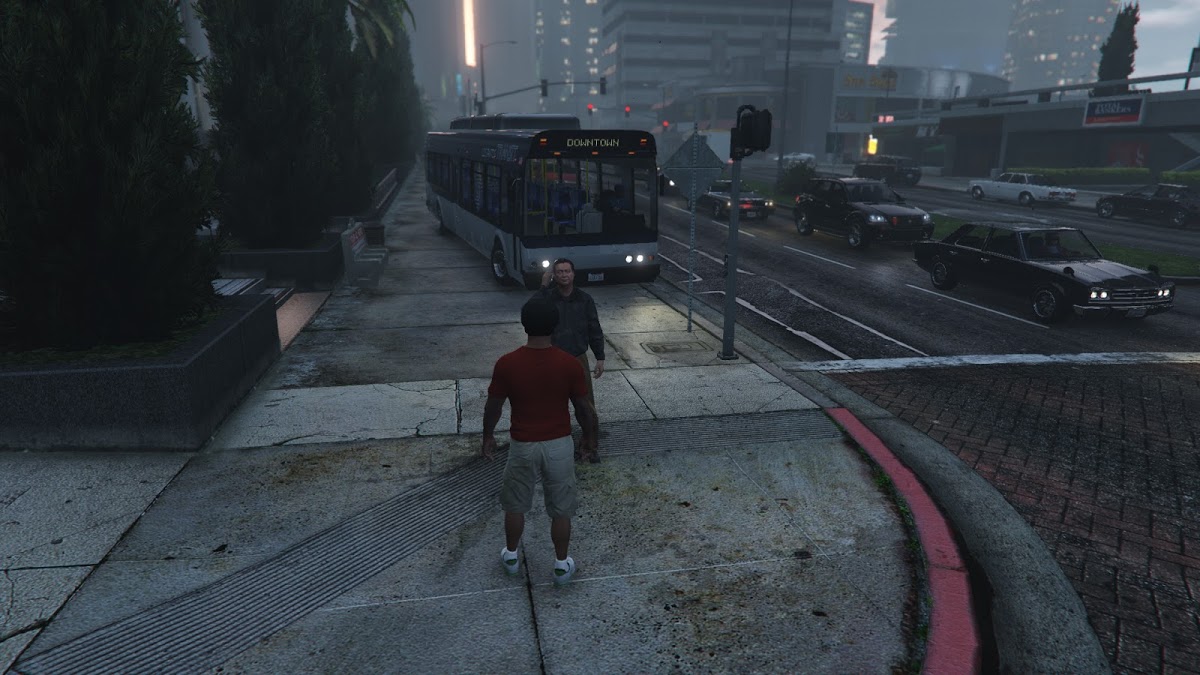 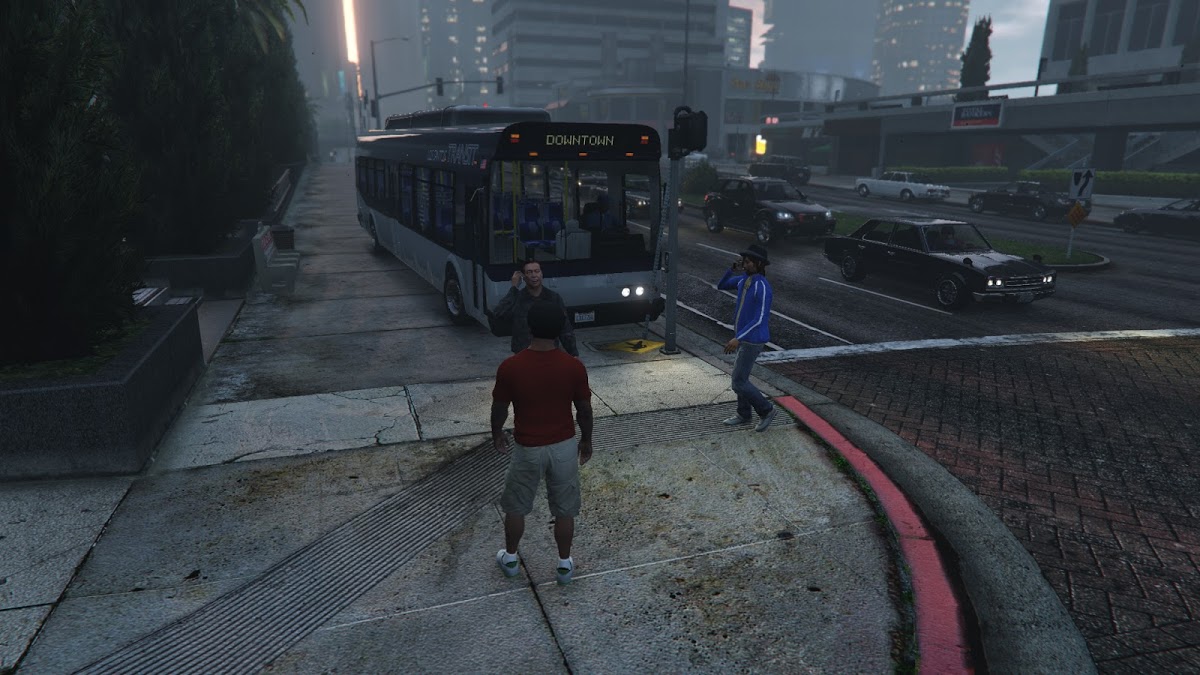 A new guy enters the stage. Also talking on his phone, he literally says: "I'm not! Please! I love you." Uh oh. The other guy, also on the phone, is saying: "Did you sell that for 50 cents!? What the hell!"

Major breakdowns all around right there. I best just continue along my way. 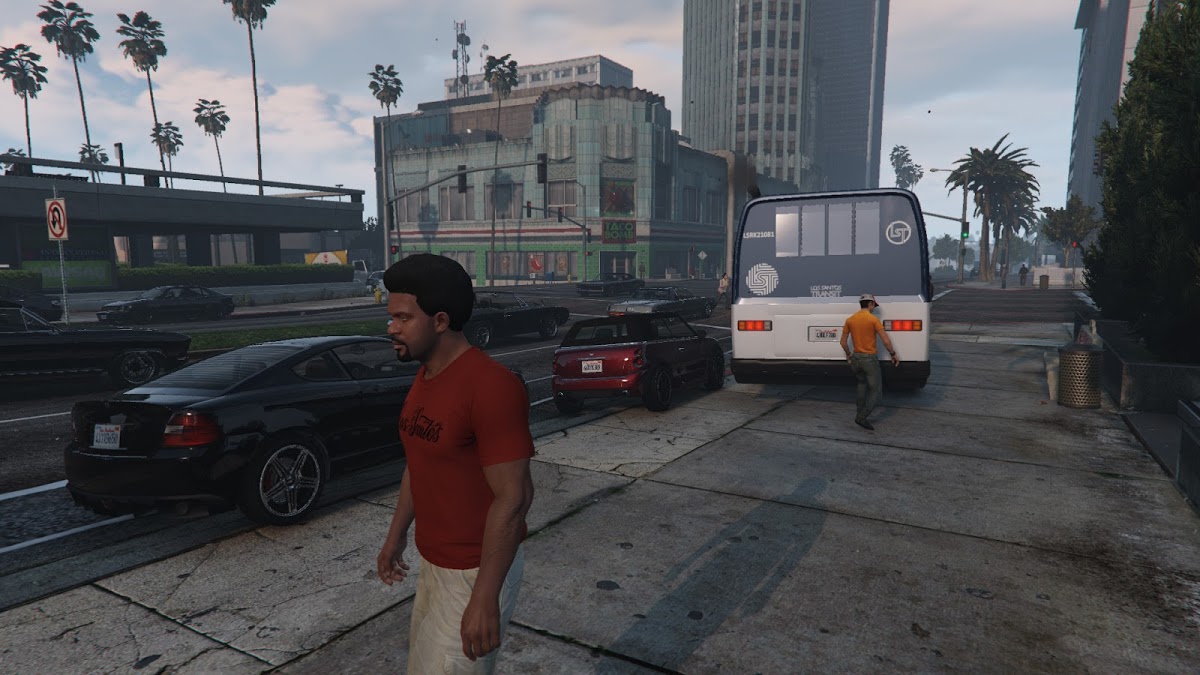 Orange shirt guy almost walks into the bus. Then shouts at it. 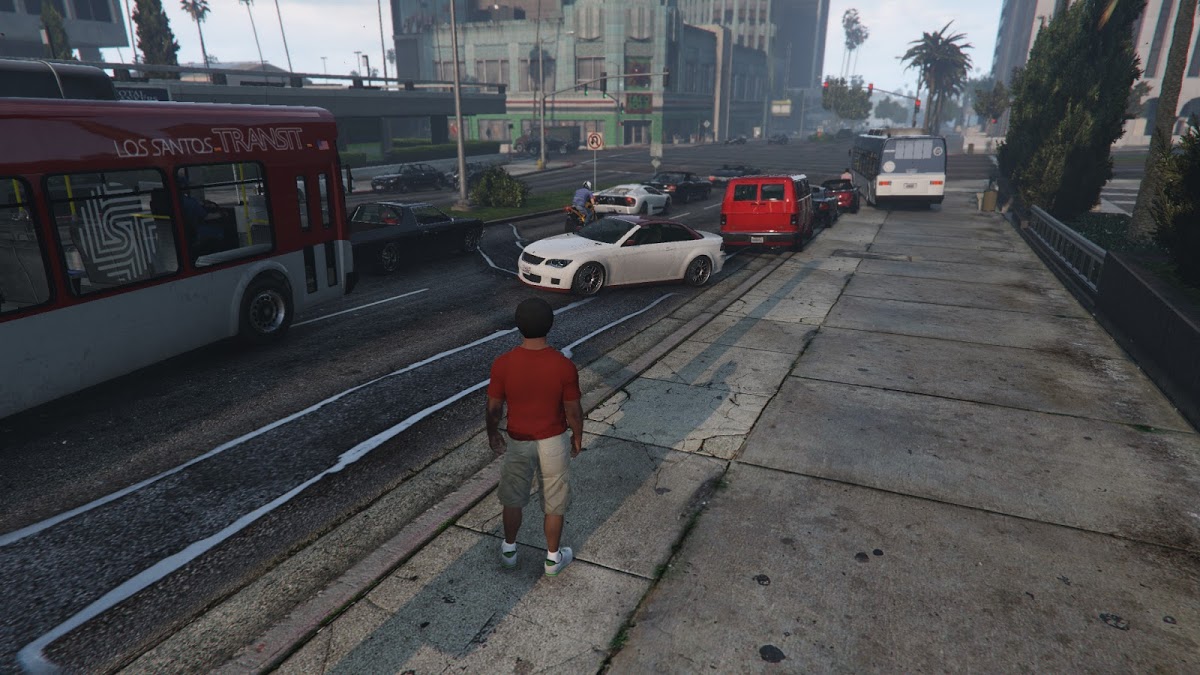 I promise. I did not do that. 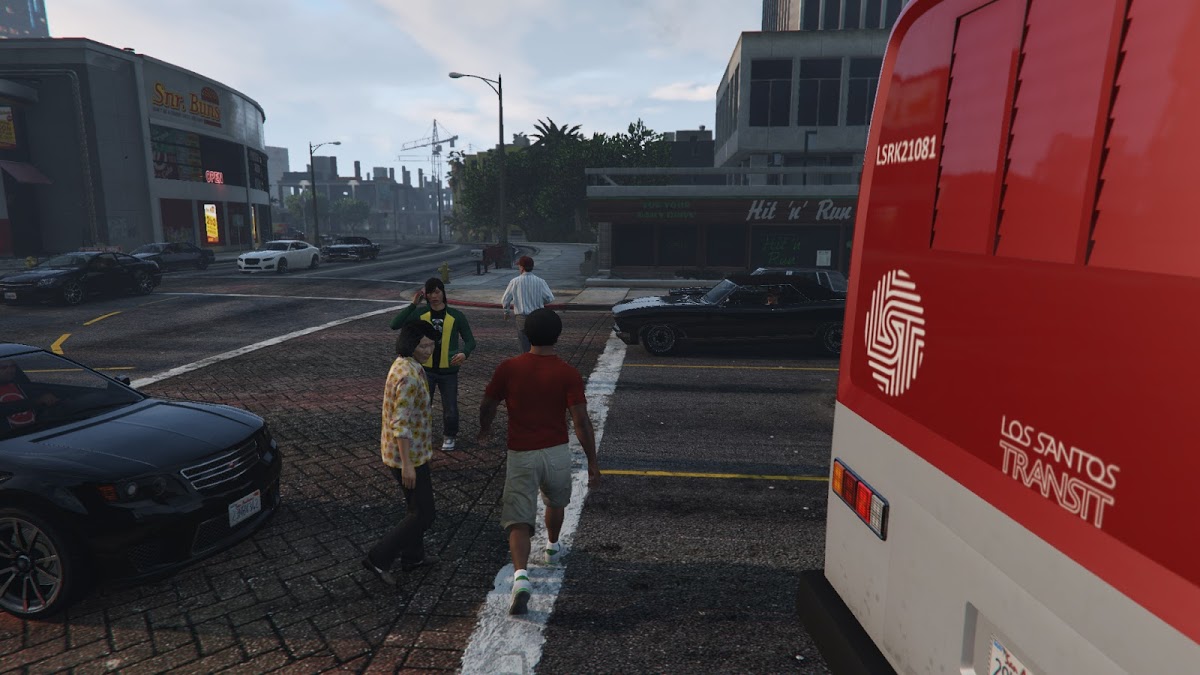 Just walk away. Don't mind the traffic, no, no. That's fine. 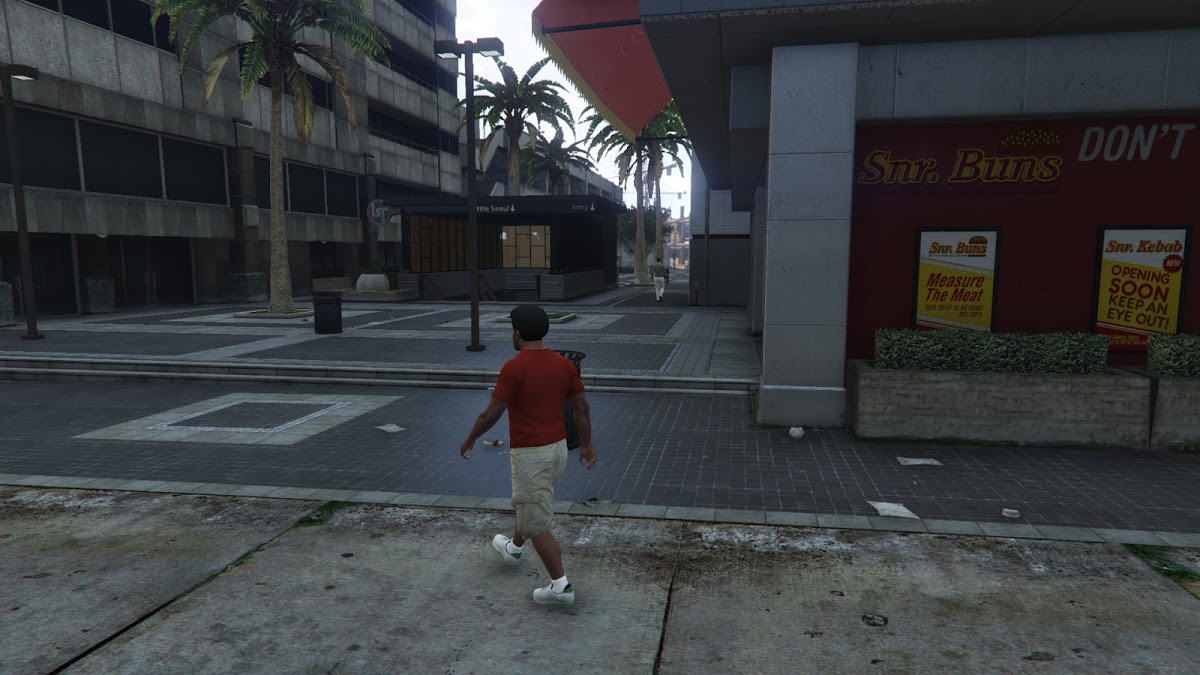 Right. Metro station. Back to normality.

Downstairs, there’s (of course) a street musician playing a guitar above the tracks, and as I wait I can still hear his short little jingle, which gives the whole scene a strange attempt at austerity. As I wait for the train, I begin to browse my phone for random, interesting websites (again, in the game). 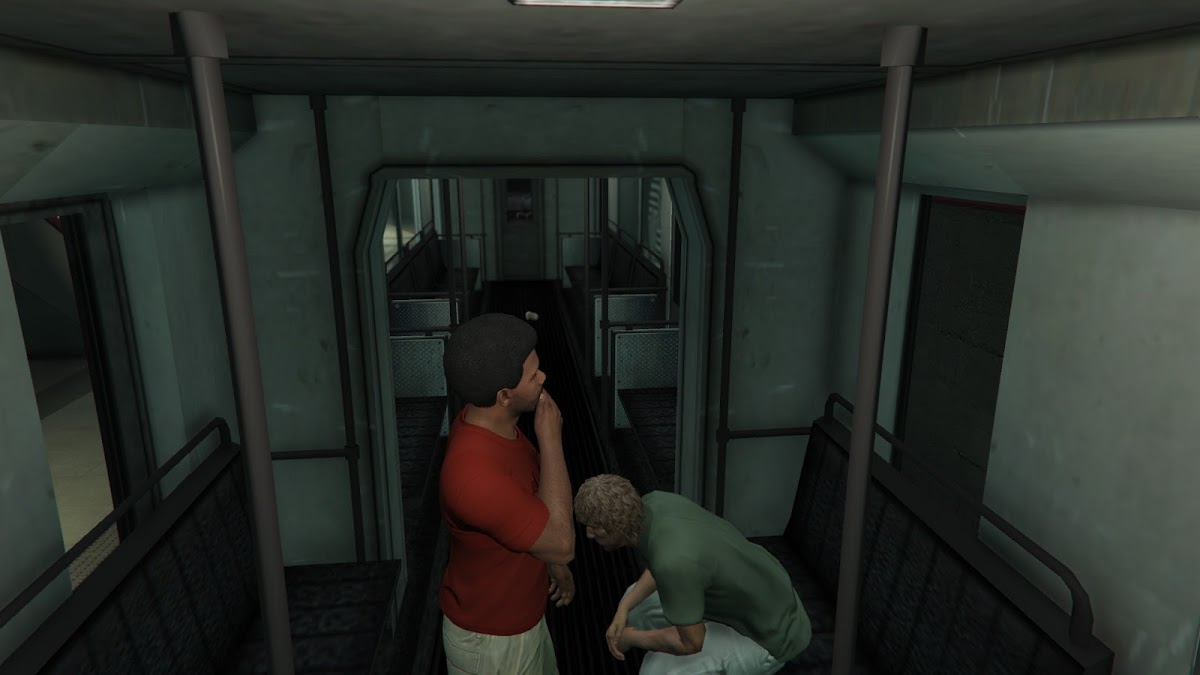 Franklin caught in the act of thinking about something.

I judge that I need to take the train southbound, because I’m going south. Makes sense, right?
Well…

I get on the train for two stops, and pop up here: 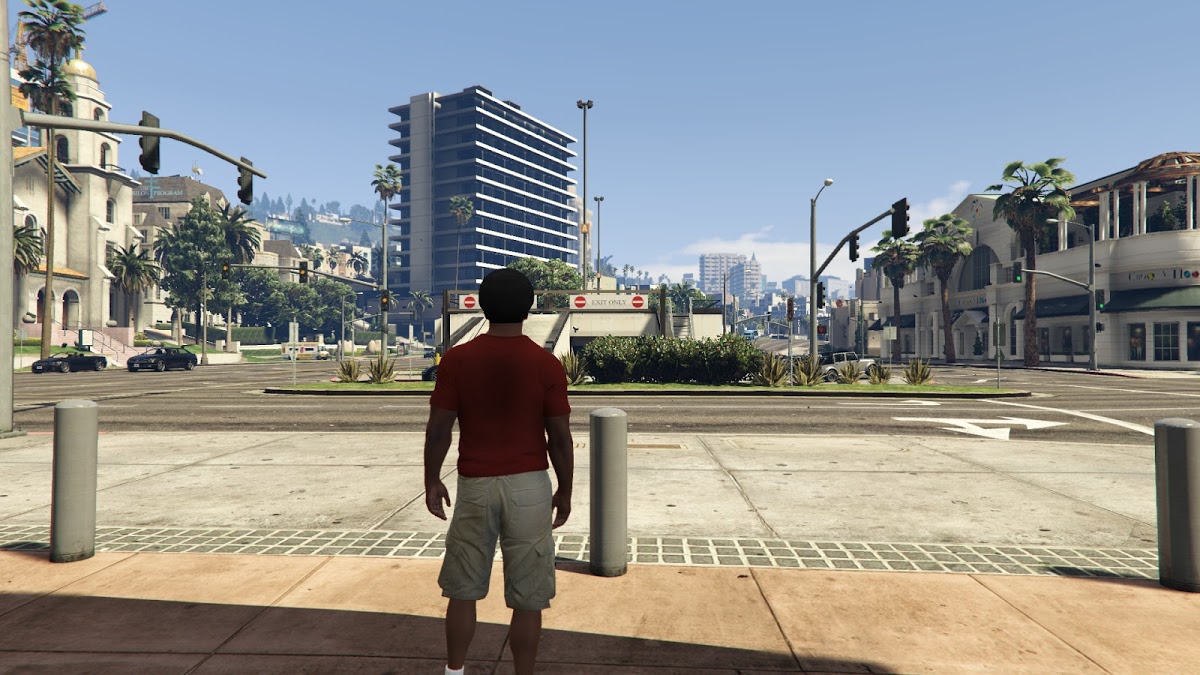 This is not Davis. This is Rockford Hills, the fancy kid’s neighbourhood. Kinda the wrong way. Crap. I check the metro map again and realize that the name was misleading: It’s technically going southbound but takes a loop north first… So in order to have gone south, I should have taken the… northbound line? Yeah, it’s stupid. Oh well. Now I know.

Ok, but in the interest of time, I take a cab from here to my garage, and finally get my bike. Wooh!

[For some reason, Fraps decided to stop taking screenshots at this point, so I have no images of biking :(] 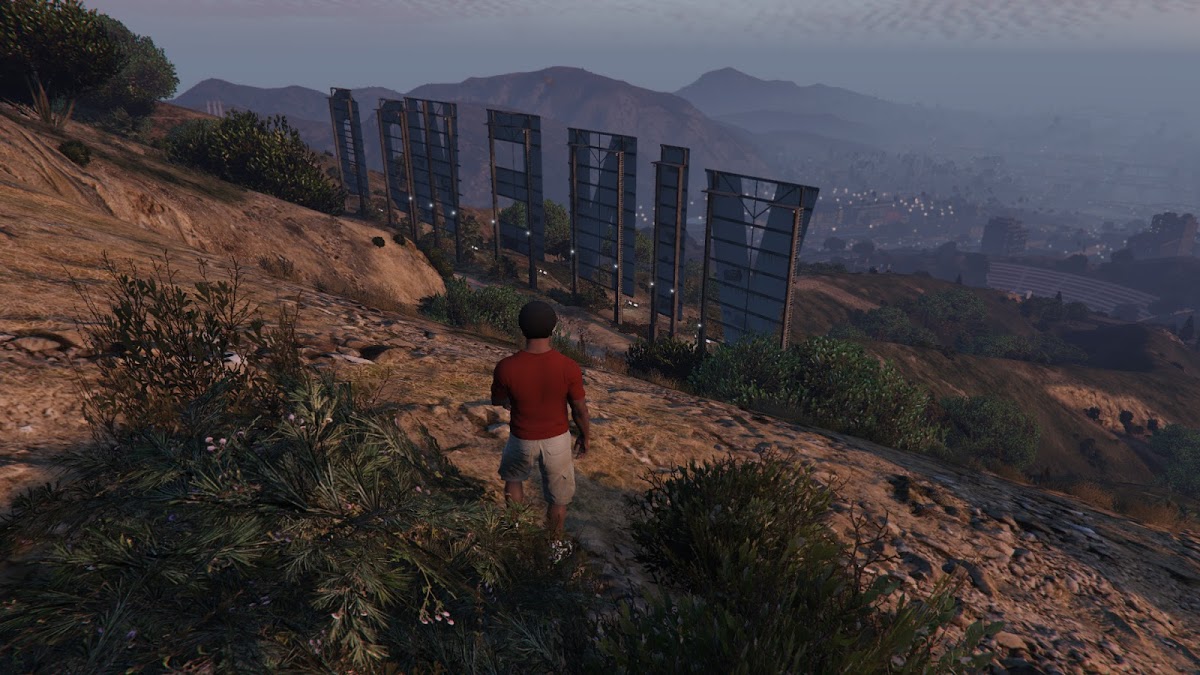 The Vinewood sign from behind. (Realized Fraps was being weird after the trip here.)

And I biked all the way up to Vinewood hills, just in time to see the sunset again. Which made me realize that an hour real time is 24 hours of game time. Good to know. 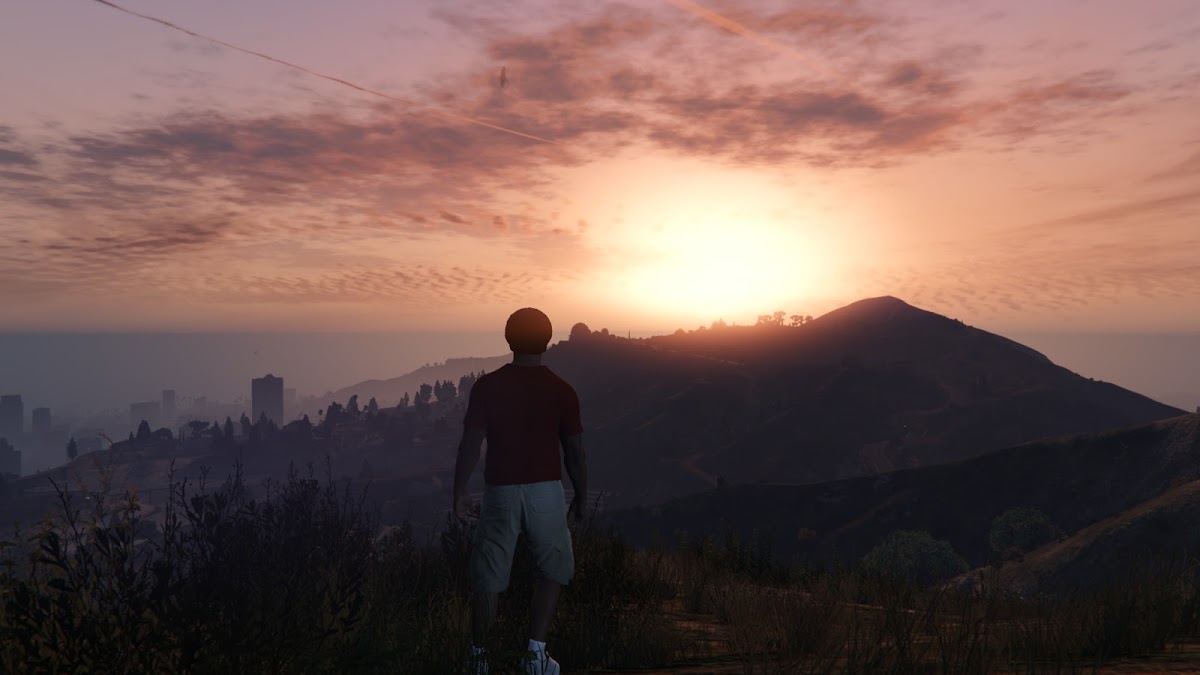 So that’s it for now! That’s an hour of more-or-less random mucking about in Los Santos.


If I do this again, I might venture up to Mount Chiliad or something. Should be fun!