A little housework: Yes, I’ve played this game before. As I hinted at here, I’m mixing this feature up a bit, so I’m not necessarily only playing games I’ve NEVER played before. However, I’m still only playing stuff I haven’t played. Meaning that I never finished this game. So I’m picking up where I left off.


Metal Gear Solid V: The Phantom Pain is beyond a doubt 2015's best Soldier Simulator/Spreadsheet management funtime game, a mix between a third person sneaking game and a military base management game. From Hideo Kojima. And it's pretty great.

Right. I load in and have to accept a ToS. It’s been that long since I played. Ok then. I accept and click through the (MANY) prompts, click, click, click and I’m in the helicopter.

Alright. Time to remember how to be a legendary soldier.

I’ve gotten a new recruit! Awesome. And it’s an S+ Rank soldier! (That’s the second highest possible, out of a lot), so that’s pretty cool. Just like that. No explanation. I guess it’s my reward for being absent for so long.
I click through, and I get another.
And another.
And another.
I get 8 S+ soldiers. Just for logging in. Something must’ve happened while I was gone?! Oh well. I ain’t complaining.

Moving on, what's my mission?

I’m supposed to follow some person to another person called the Major, and then take the Major out. Okay. I can do that, I think. 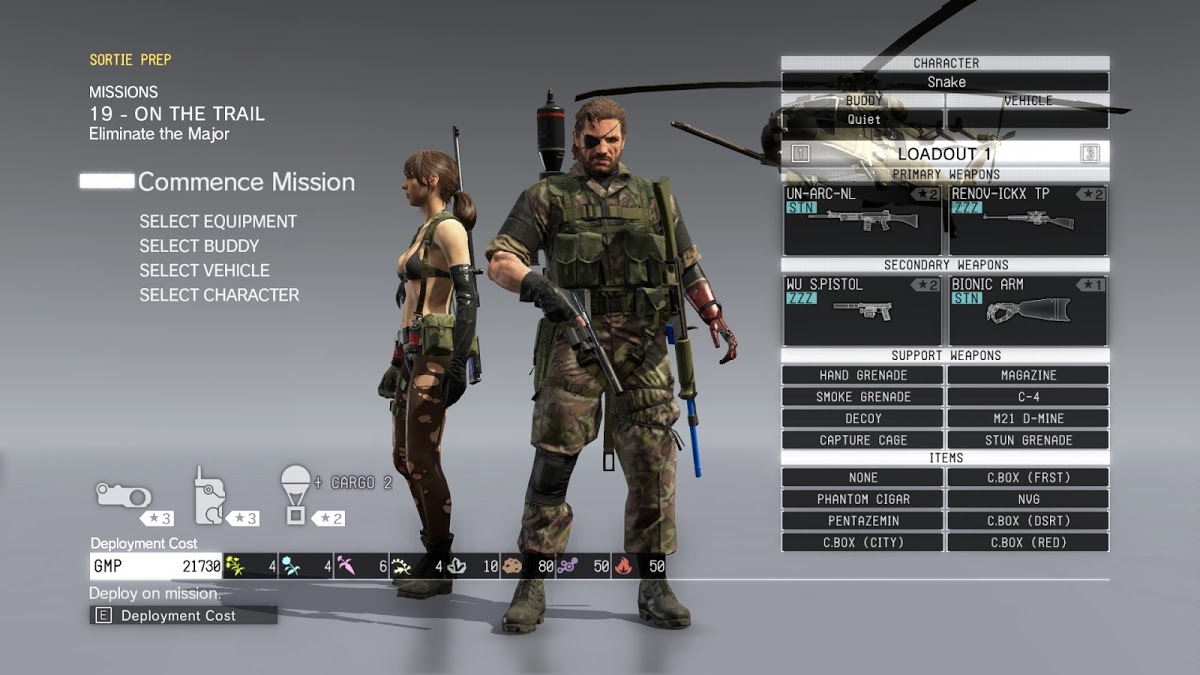 Aw yeah, All Non-lethal. Let's do this.

I deploy with my standard non-lethal gear (because that’s how I roll) and Quiet because she just got her non-lethal sniper too, so that’s pretty dope.
I land in a chopper while “Take On Me” is playing, because that’s what my October Self decided was the best idea. Sure, me.

I spawn outside the village where this first guy supposedly is. I pull out my binoculars and begin scouting. I see… 8 soldiers. And a chopper. That’s going to be bad news. I still haven’t found the… 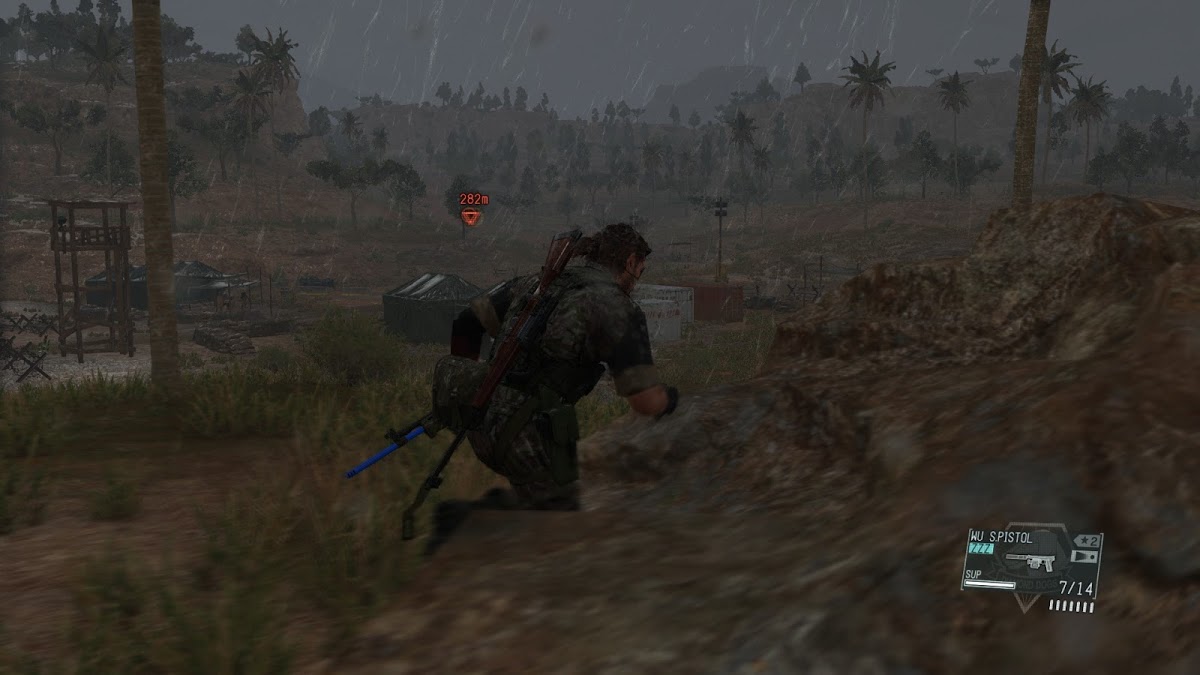 The red icon is the car. I'm horribly behind.

Found him! There he is, getting into a car with a squad. A car. Fuck. I have no vehicles. And so I do the one thing I can.
I get up and run.

After a car. Don’t tell me it’s a bad idea. It’s a great idea. I got this. I’m Big Boss: Legendary Soldier. And all that.
So I—
WAIT
An A+ Soldier! Over there! Just along the path I was going, and I just happened to scout his rank. Car’ll have to wait. Slight detour and I get over and Fulton the poor sod into the air. He’ll have a better life at my base. Trust me. 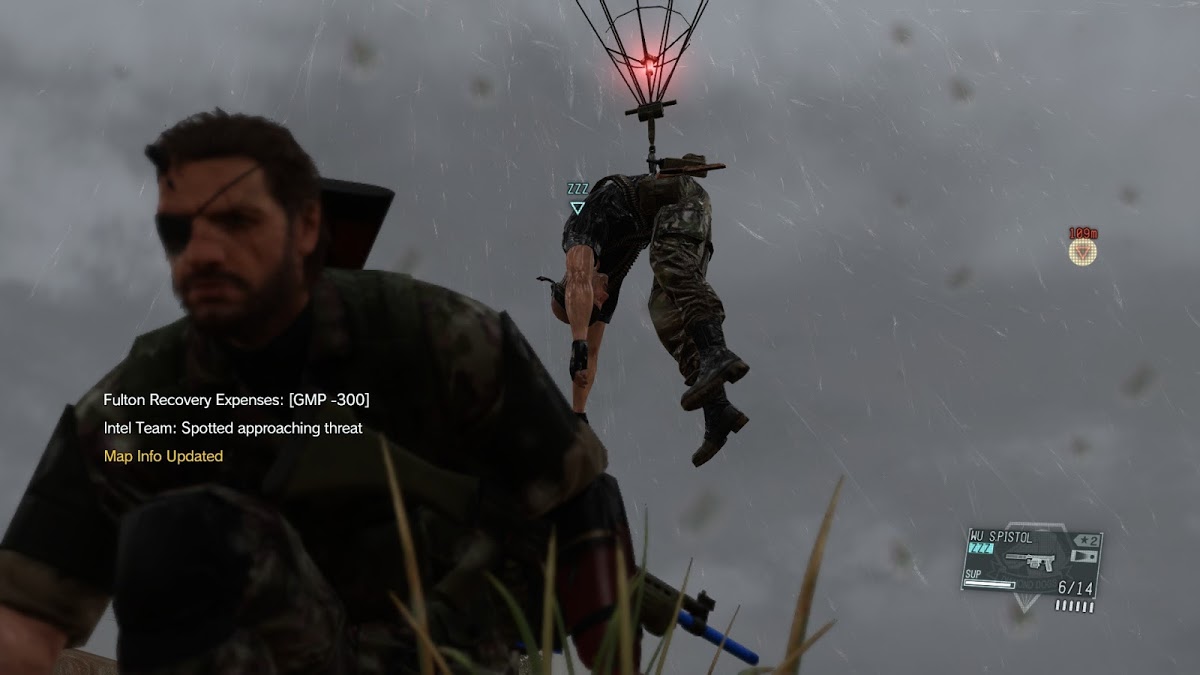 This is why you play this game. So good.

Back to the car. I run for a while until I catch them up in a village where they had stepped out of it.
So I sneak along as they walk through the village, thankful that I just managed to catch up to them…
And they get into a new car.
Nononoo…
I run again as they drive up next to a small hill and stop. I run up the hill, barely realizing they’ve stopped until I scamper down the other side. 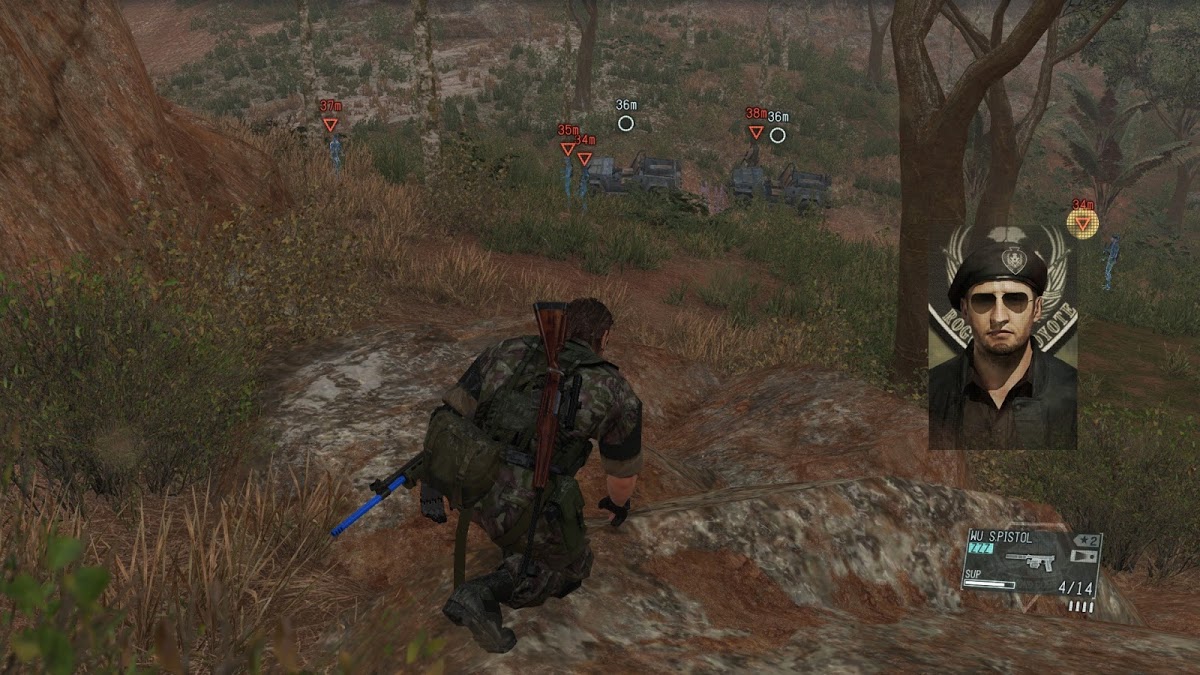 They're ALL around me.

I freeze, realizing where I am. This is bad.
Looking around, all I see are enemy soldiers. They were waiting here. Waiting for… the vehicle, I realize.
I scout around, and sure enough, I find The Major standing there, dumbly in the rain, smug hat on his face. I sit perfectly, dead still, worried they’re going to spot me at any moment as the first guy gets over to the Major and they begin talking. 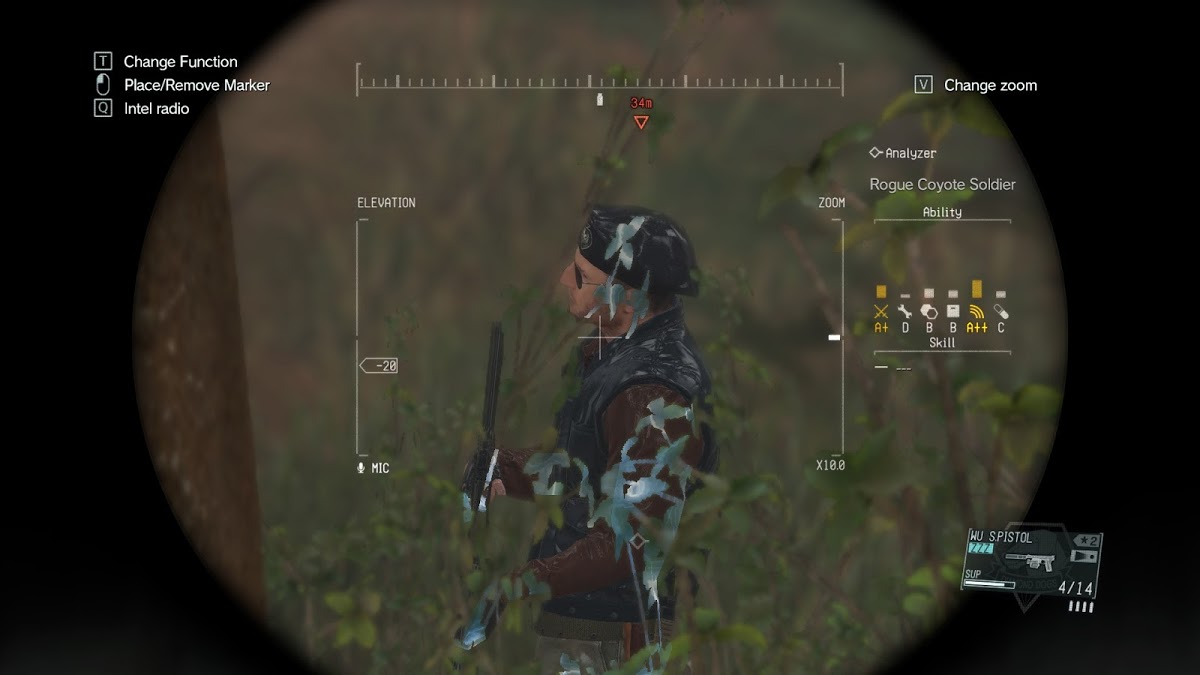 I manage to listen in, but don’t pay much attention to the words, as I’m too busy trying to figure out how to deal with them. I want to get this guy Fultoned, just ‘cause, but that’s going to be difficult with all these soldiers around them.
They finish talking and they get back in their cars. Oh, no, they’re going away. Don’t want to run after them again.

Split decision, I pull out my Tranquilizer Sniper and aim for the Major---
And I miss. He doesn’t fall down. Oh shit.
I forgot this sniper doesn’t have a silencer. They all stop, get out and begin shouting at each other. They know I’m here. I pause, crawl down to the ground.
Ok, they don’t know exactly where I am yet. They haven’t started shooting. 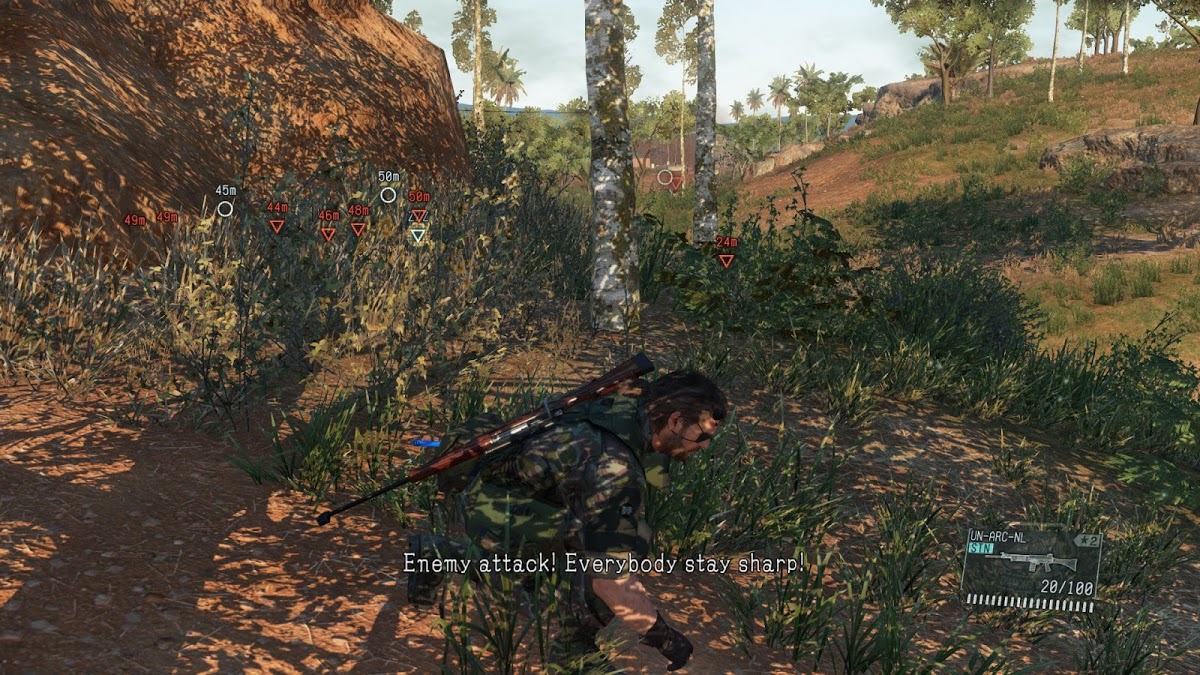 The faint ZZZ's you can barely see is the Major who's sleeping sweetly.

But oh! Wait! I didn’t miss! I just hit his chest! The Major’s asleep now! Cool! Except… I still have all these other soldiers to deal with before I can Fulton him. I sneak through the grass, carefully taking them out one by one. Spreading chaos with a few stun grenades, so they don’t quite find me. I get down to a few but then someone spots me. I frantically shoot after him, pull out my rifle and keep shooting but another one sees me as well and alerts the rest.

I almost get him too but realize my big problem: The Helicopter’s here.
I’m dead. I’m genuinely dead. The Helicopter aims and shoots and I die.

Ok. I can do this now. I manage to not fall down the mountain and stay on top of it instead. I scout around while they’re talking and sends Quiet to the other side of the valley so she can shoot from over there. She begins and I follow suit and hit the Major again, this time with a clean head-shot. But now they begin shooting after me and I take heavy damage. I lie down. I have to change my tactics. Can’t keep shooting a measly sniper while they’re all aiming after me.
So, I pull out the Drew Special: The Grenade. That’ll surely do it. I begin flinging them down the valley, hoping I hit something.

However, I don’t throw far enough. Instead of going over to the other soldiers it lands right next to the car in the middle of the road. The car with the sleeping Major in it.
And it explodes.
And he dies. 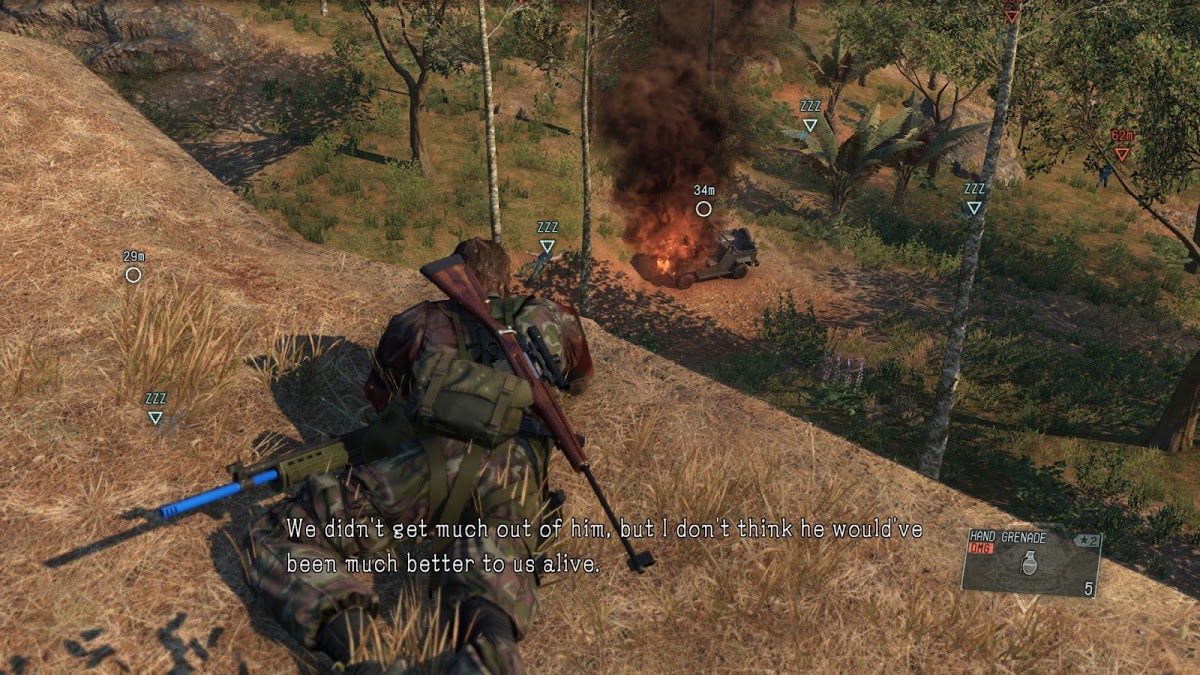 He... was sitting in that car. Sorry!

Whoops.
So much for that Fulton idea.
Mission complete it says. Hah. Right. It was only to eliminate him, true. Any means necessary.

So I turn around and begin running again.

Mission was accomplished after all. Sometimes, you just gotta take what you can get.