(Ok, so also just this time, uhm... I had almost written this entire thing and then my CMS decided to crash (which is funny because of what happens later) so I had to rewrite the whole thing... Sorry if it's a little tired. I don't remember it all maybe.)

Ok, time to enter this big-un! 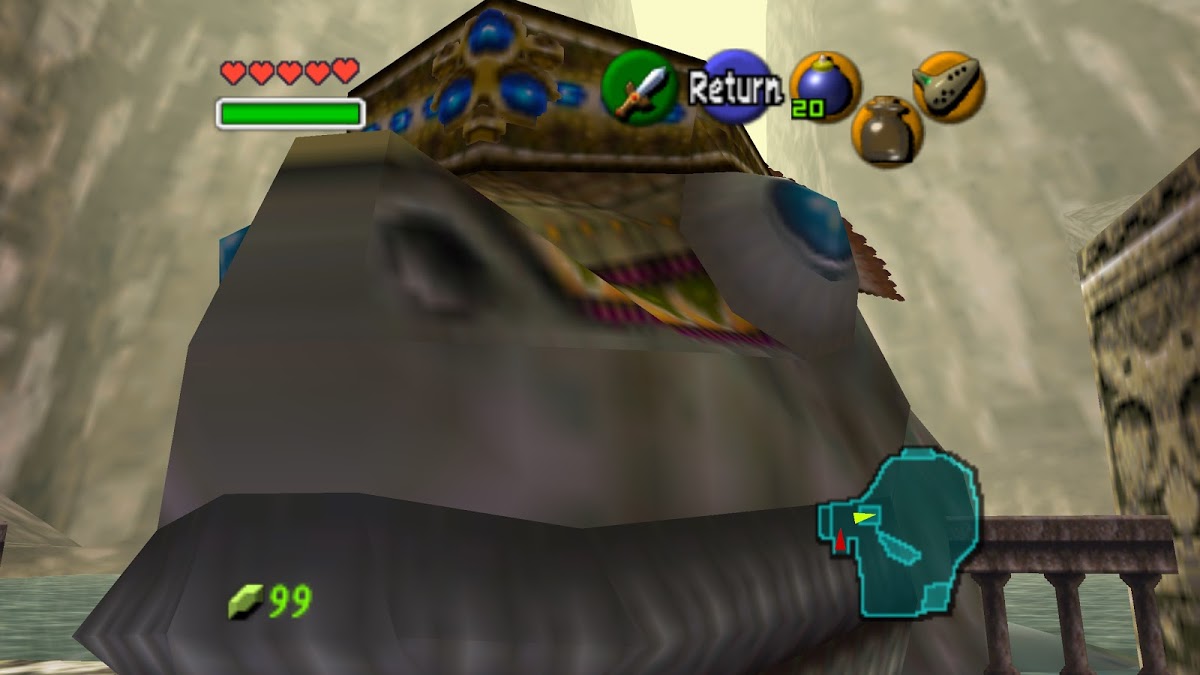 Only one problem: His mouth is closed. So I try all the usual suspects, Zelda's Lullaby, talk to him, hit him with a sword, throw a bomb at him, roll into him, but no, nothing works. He's just there.

Another puzzle. Great.
So I look around the area and find this tiny island off to the side where there are two suspicious looking rocks. So I jump straight to option 4 and voila, an entrance! 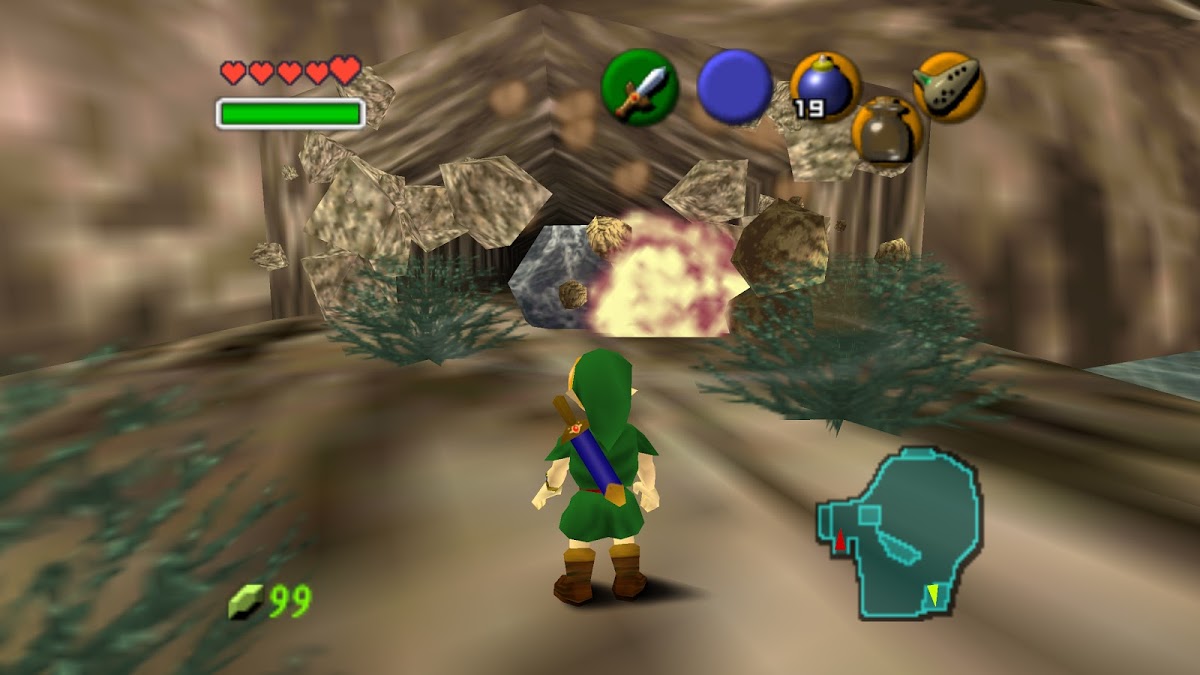 Well, this is probably not what I'm supposed to do but let's have a look! 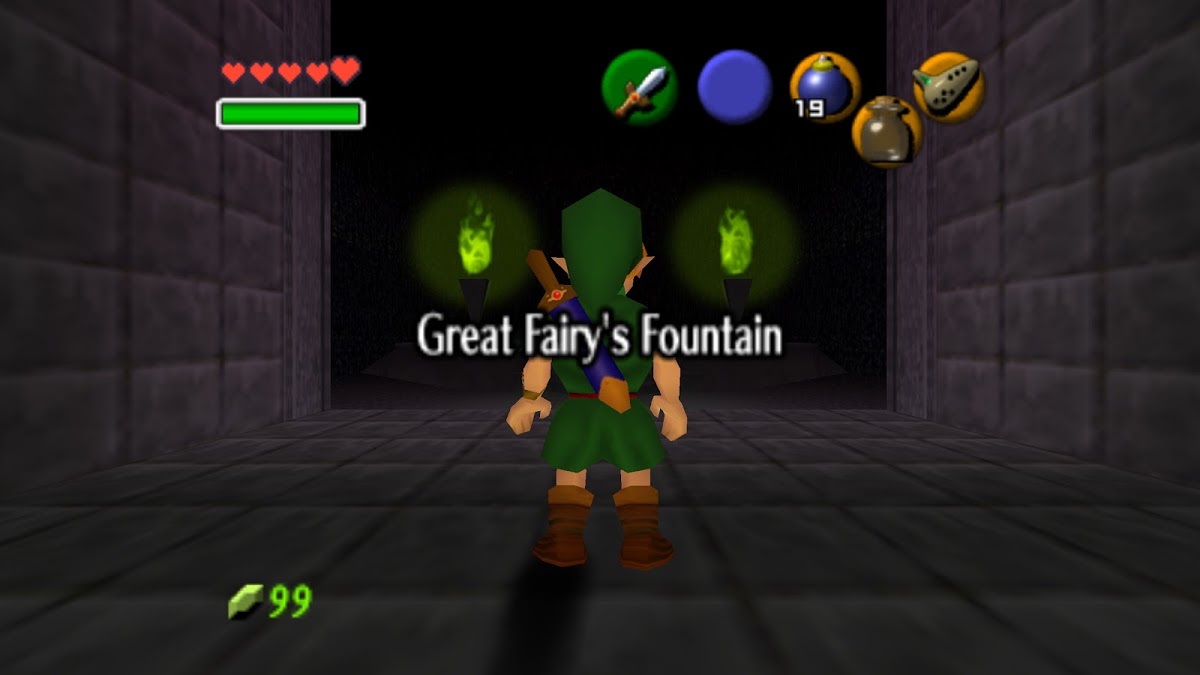 !!! Yes: Question Time!
All right. Remember your practice. We're gonna go straight it and ask the hard-hitting ones first 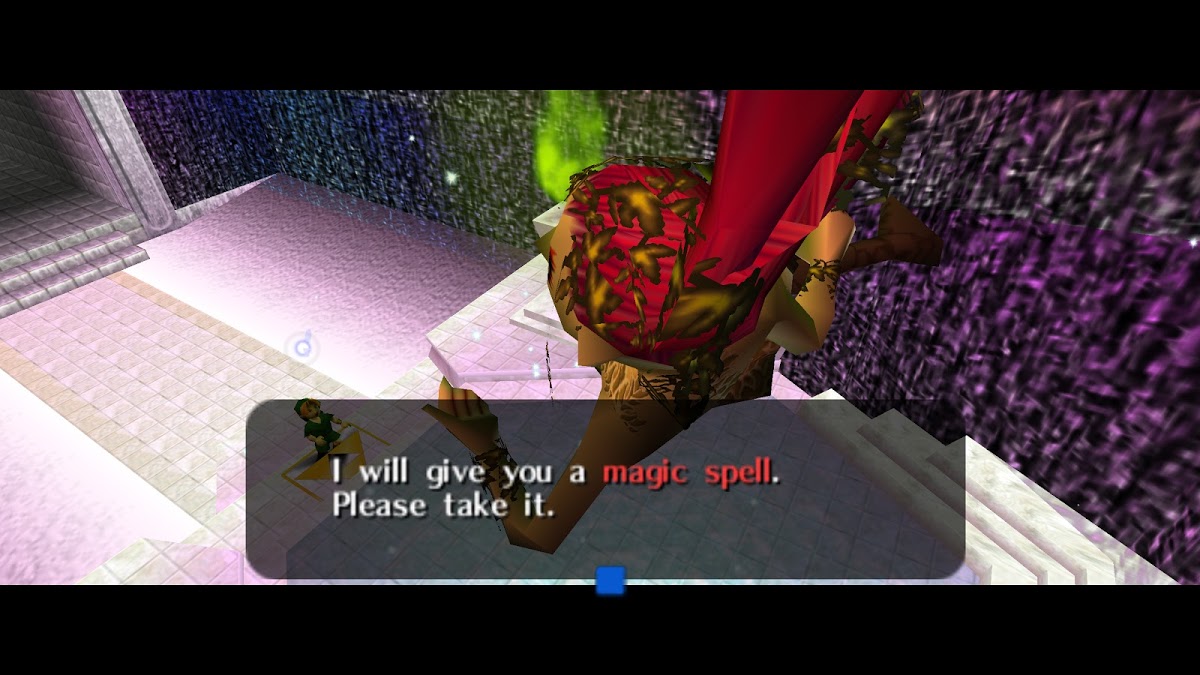 No, I'm not falling for your bribes this time. Answer me this: What's the deal with how fairies just spawn around people? Are they born!? 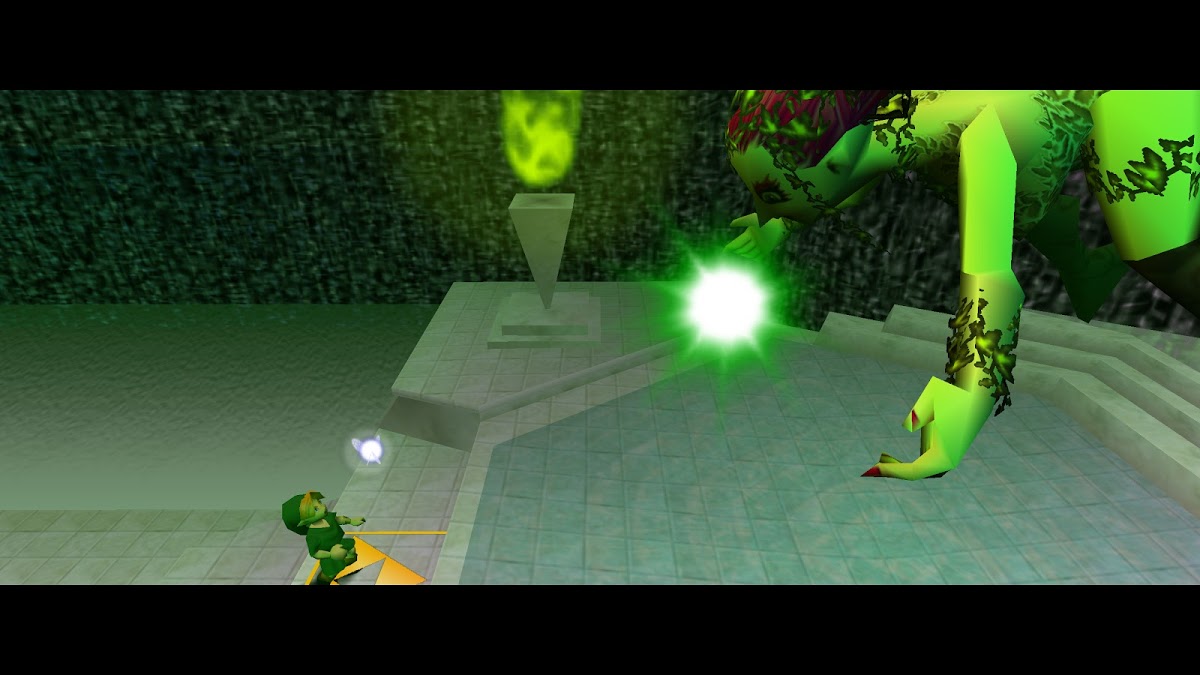 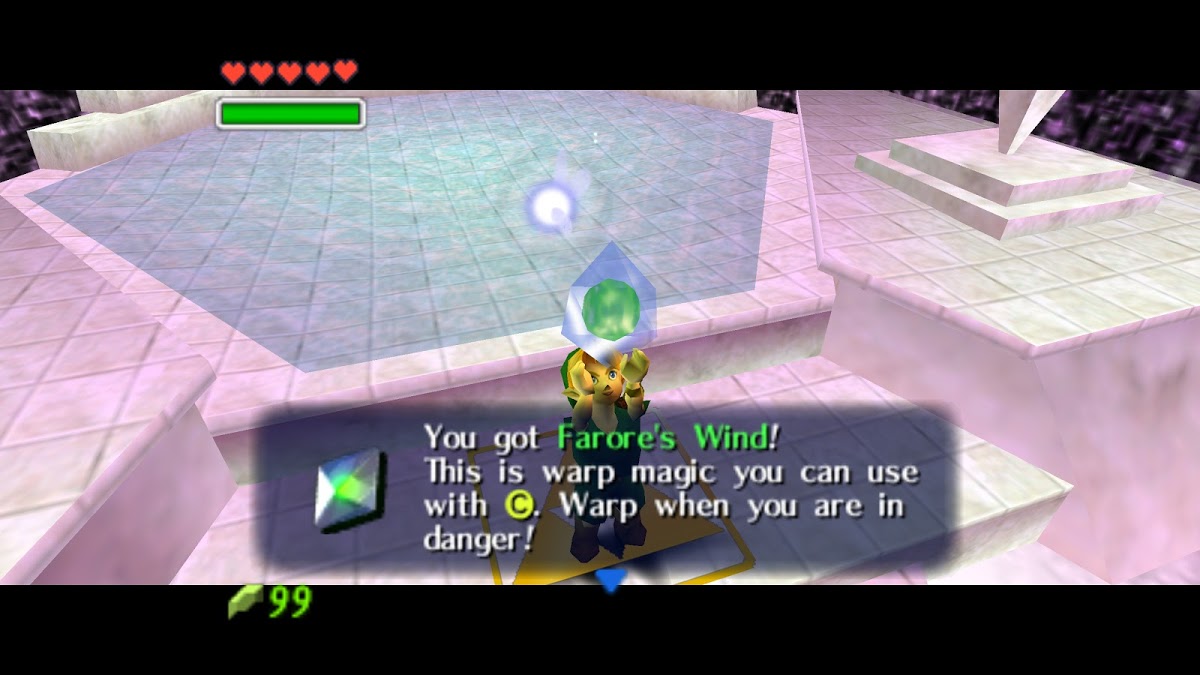 NO LINK DON'T GET DISTRACTED BY SHINY THINGS! 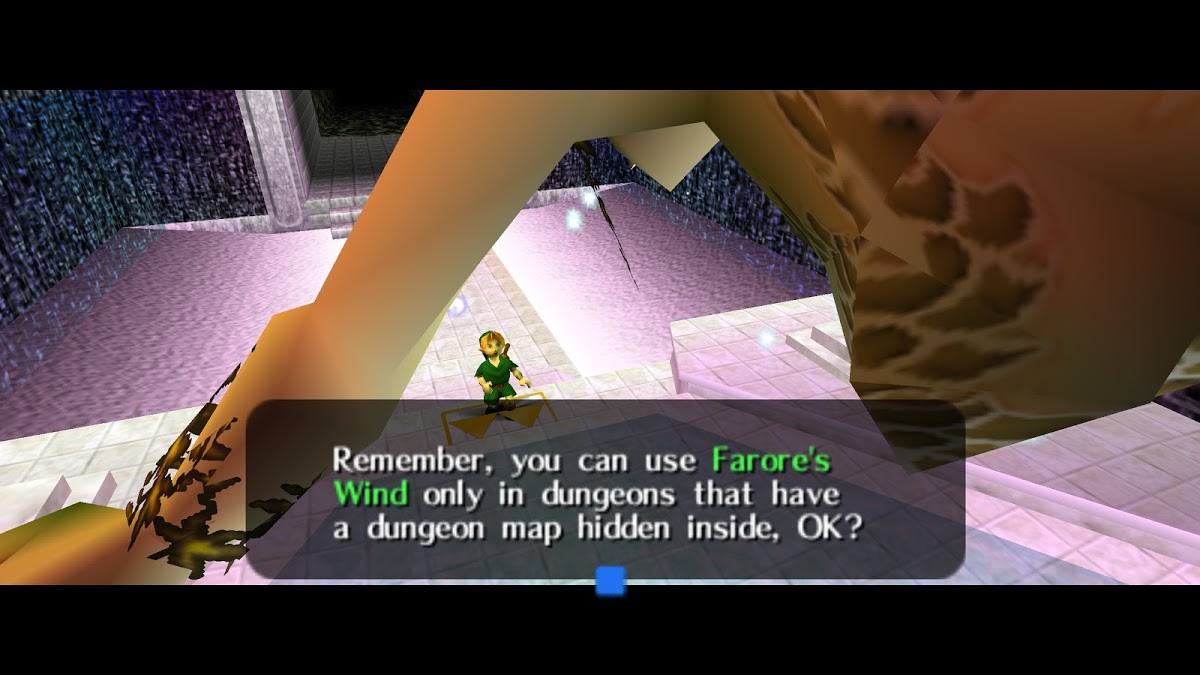 And then she disappears again, so alas, not this time either. We'll get 'er next time, Link! I believe in you (no I don't).

But anyways, back to the matter at hand. With no other clues, I go back to Zora's Domain and ask around, because that's a good thing to do when you're stuck in these kinds of games. 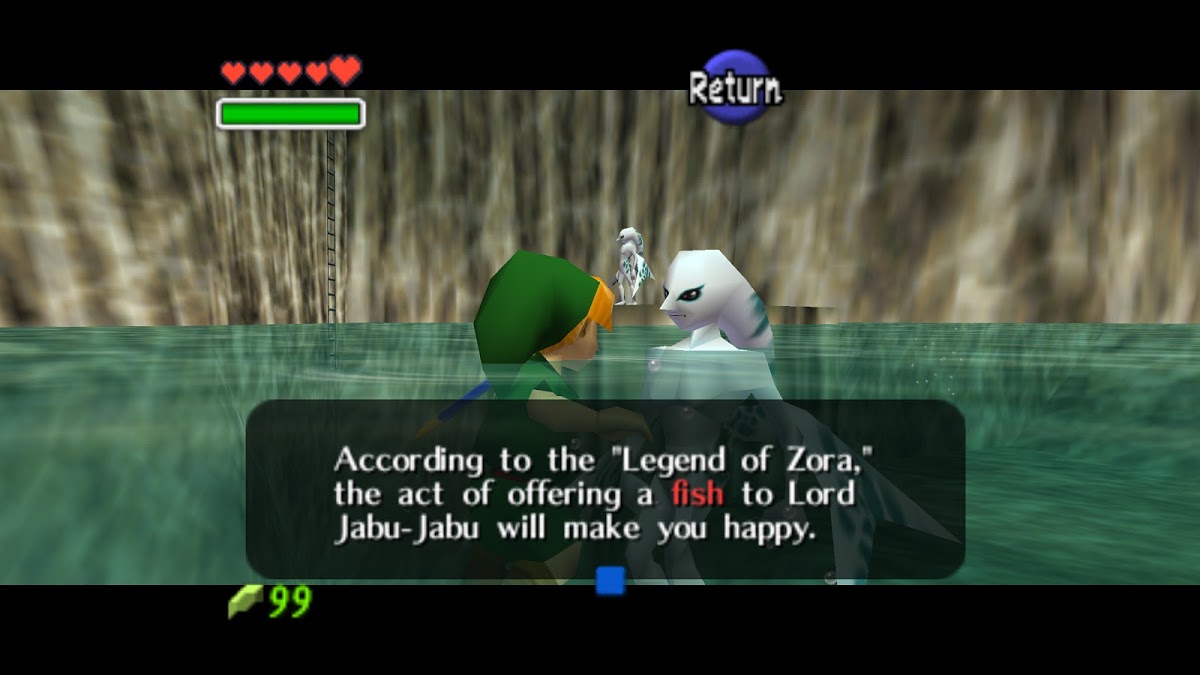 Well, that didn't take long.
But wait. That means... Noo..
That means... fishing.
Crap. Guess I gotta pay that fisherman-I-ignored-last-time-because-I-didn't-want-to-fish a visit. 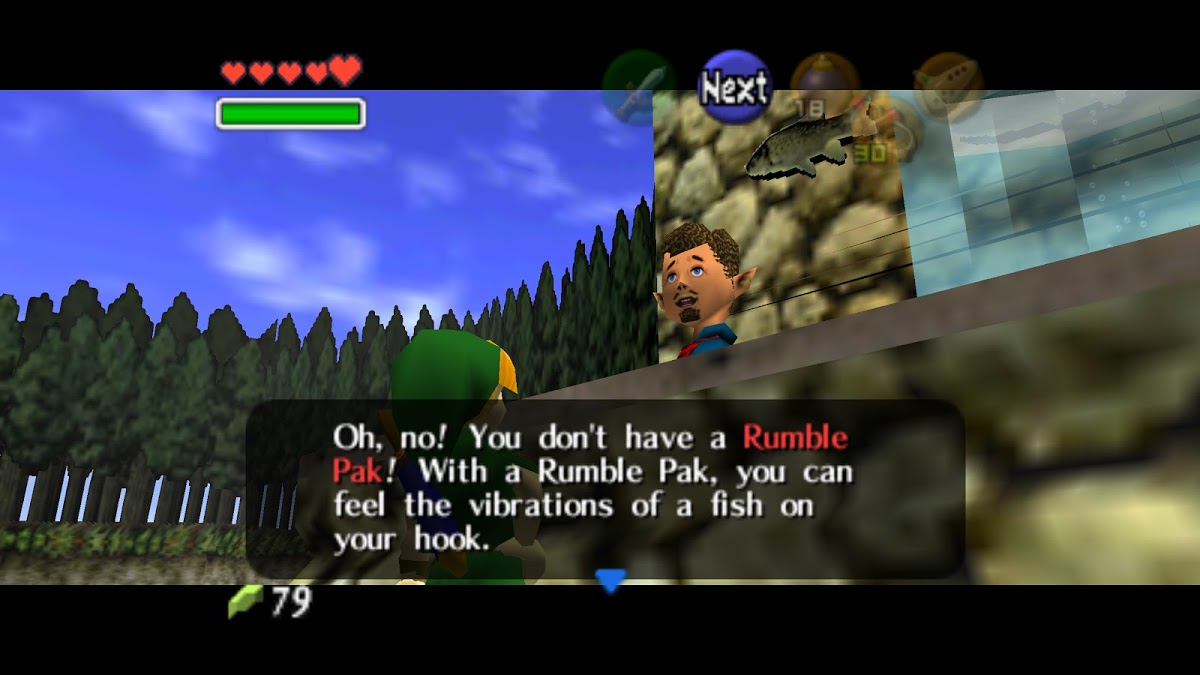 No Nintendo, I'm not gonna buy your "Rumble Pak" (uhh).
And then he dumps a ton of tutorial on me and while I'm trying to remember what I bound the "Z" button to he's off explaining what the Stick Down and the R button does, and I go, sure, whatever. It's a fishing minigame, how hard can it b- 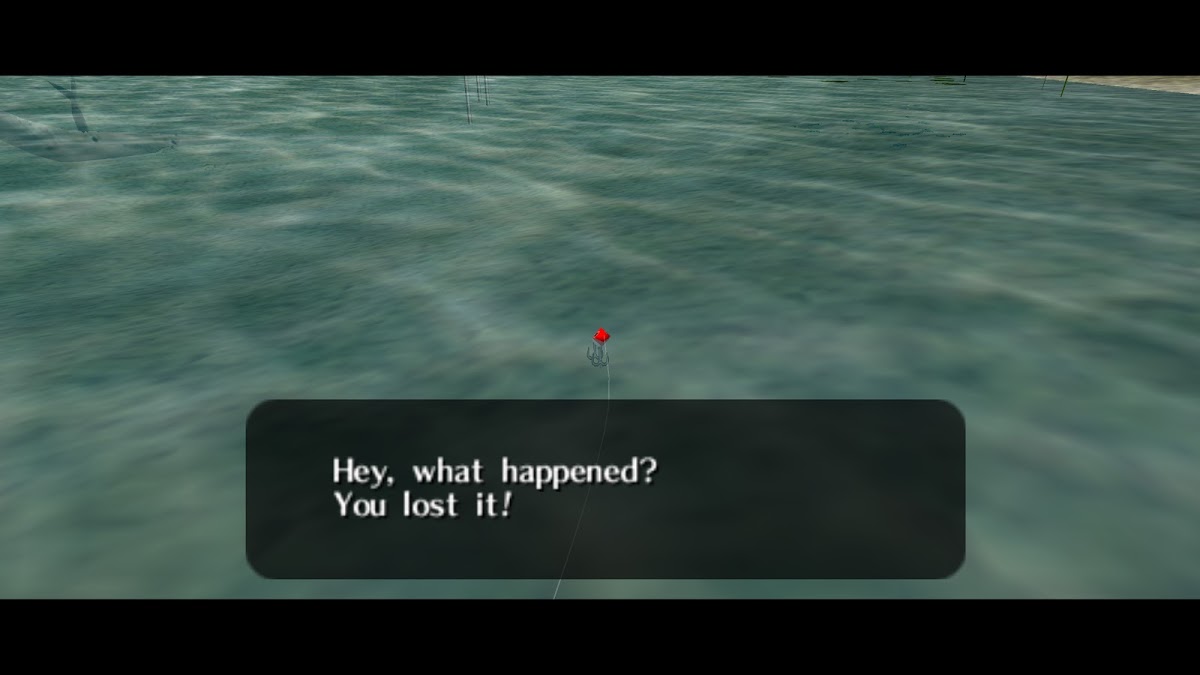 Well.
Just a little tricky, but I got the hang of it after a few tries, and then look at this beaut! 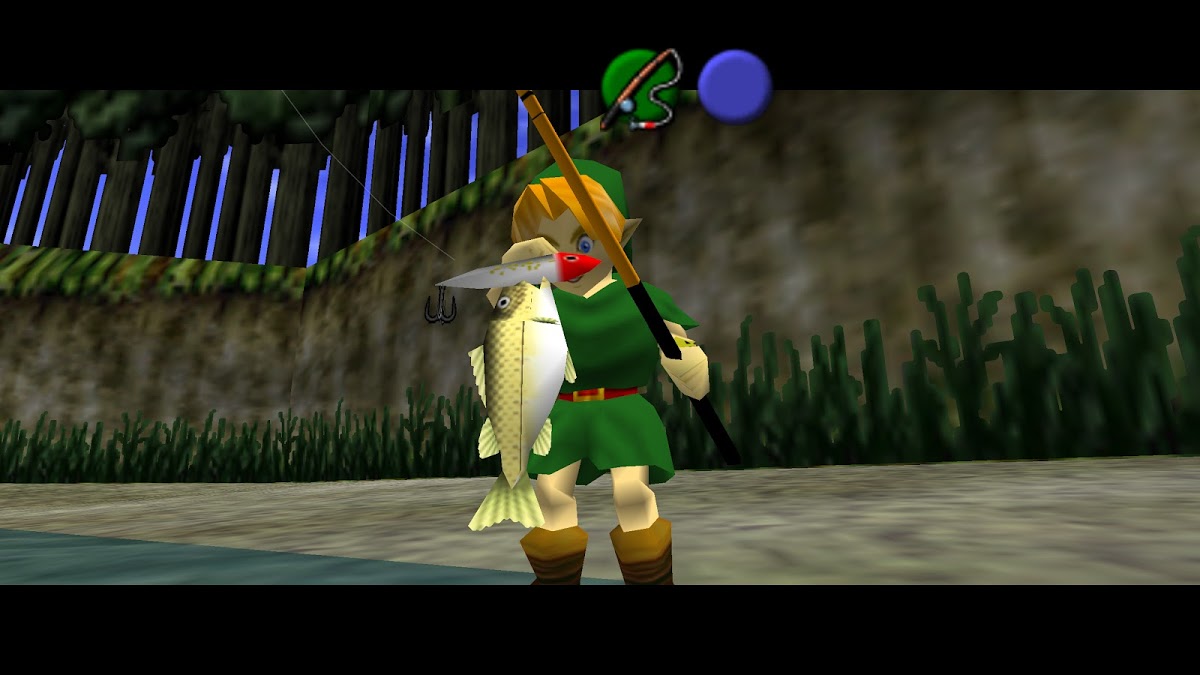 All happy, I go back to the fisherman and present my catch, and he's all "sure, that's nice but only 3 pounds, you can do better than that kid!" and I'm like "I don't care I'm gonna feed it into a large fish" and he's like "oh you want to quit already?" and I'm like "yes?" and he's like "ok." and then I look in my inventory and...
there's no fish. None at all.

I go back him and demand to learn where my fish is and he's all "Want to fish? 20 Rupees!" and I storm out the place.

So, before I get more annoyed I look up how you get a fish into your inventory, and it turns out, it was a lot easier than I thought. 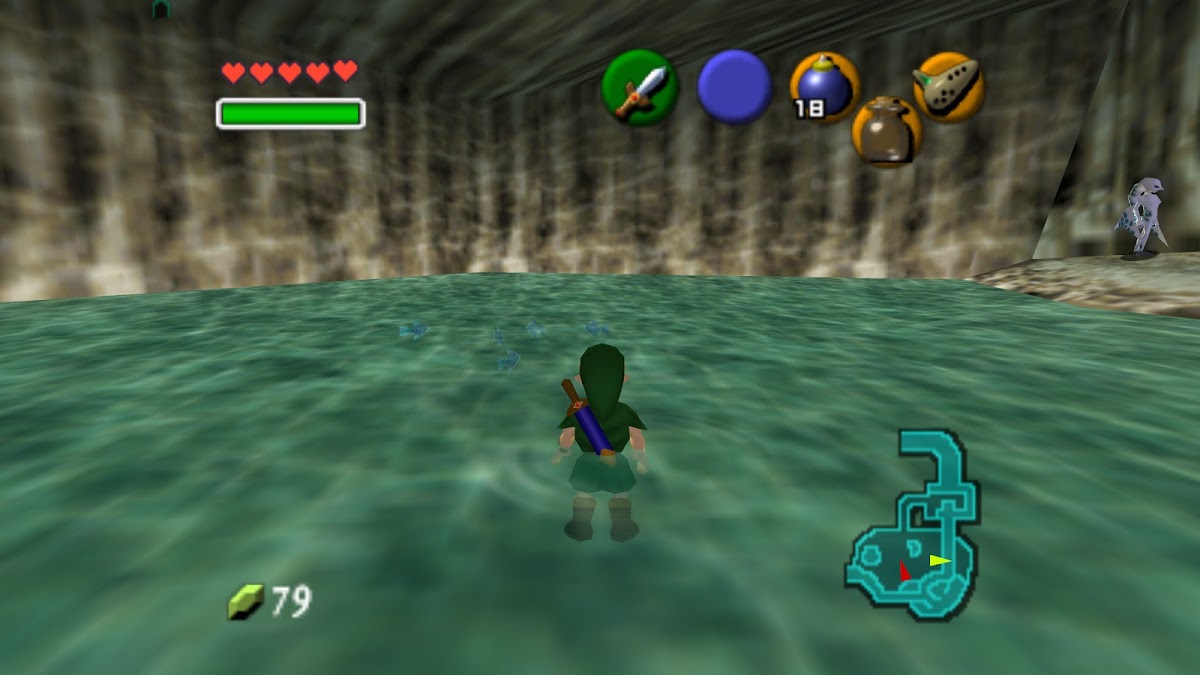 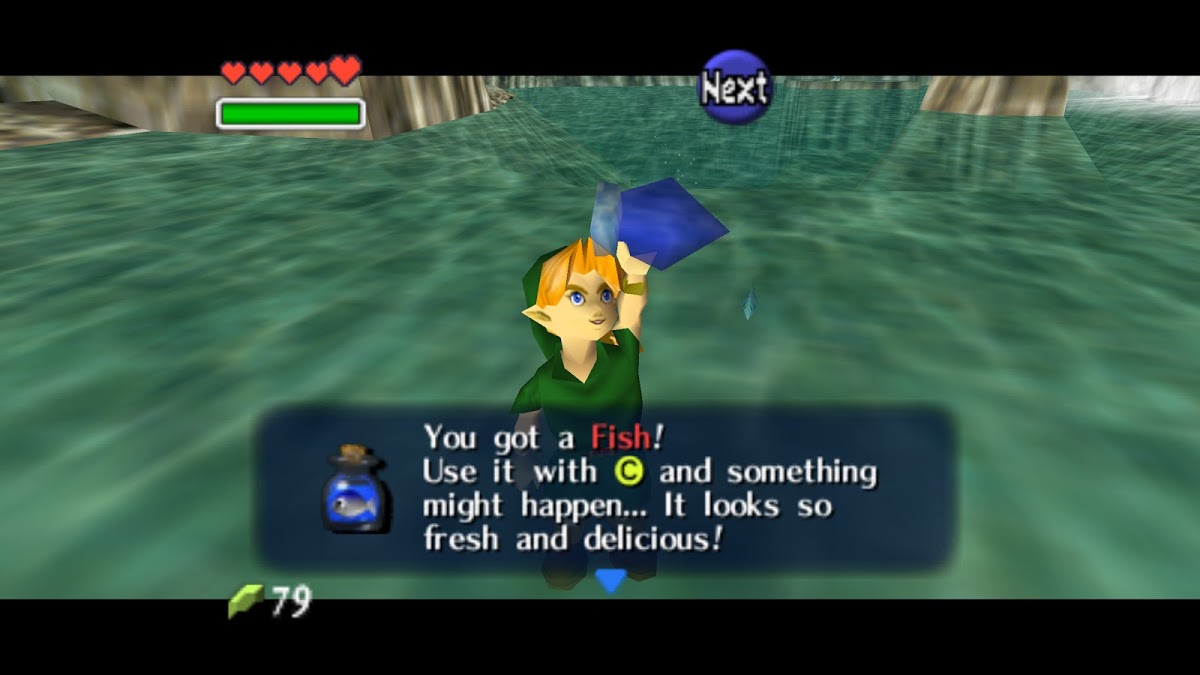 ...why can't I just fish it? Some consistency woouuld be nice.
(but clever how getting the letter in the bottle gives you a bottle which you need for this.)

But ok, we're good now, it's Jabu-Jabu-Time!
I run back, dump it in front of him and he opens his mouth and sucks the both of us in. 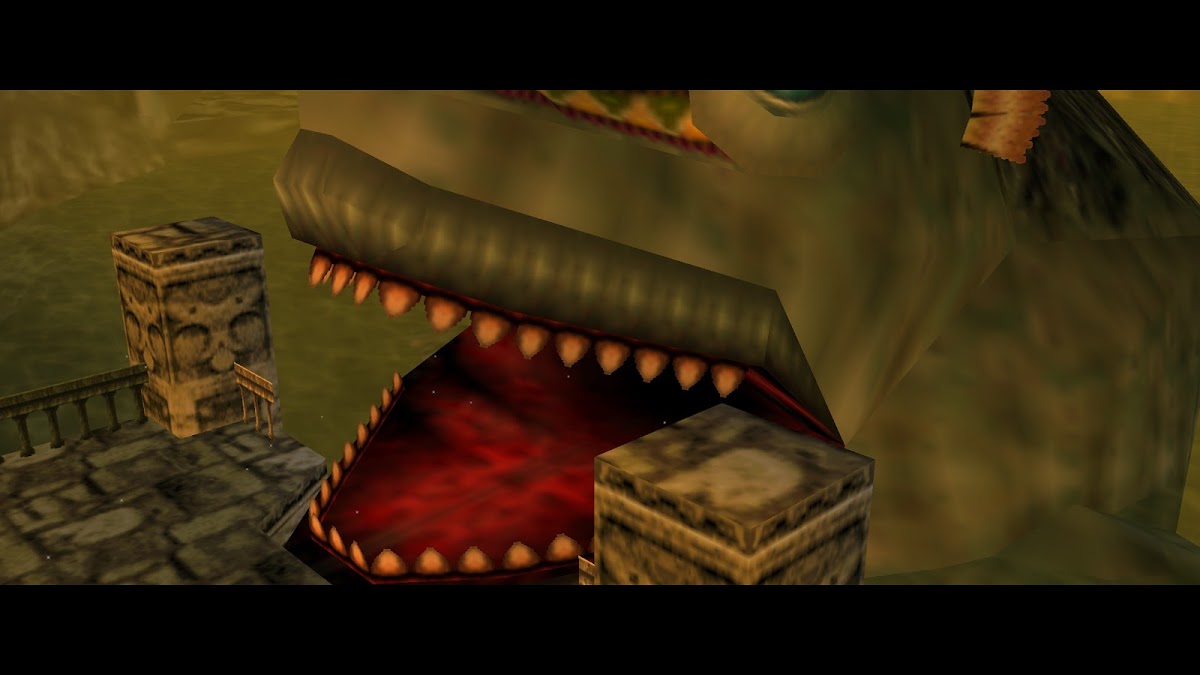 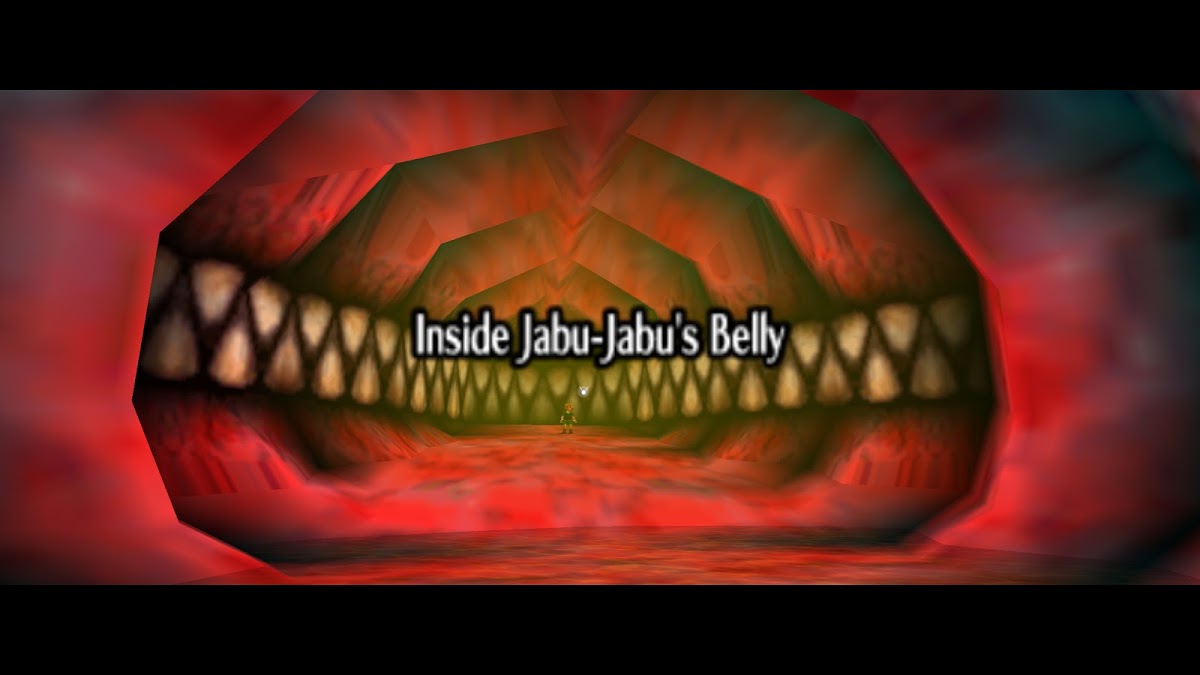 The first room (the mouth) is pretty simple and after solving a "puzzle" (hit the glowing thing to open the door) I get to the next two rooms and look who it is! 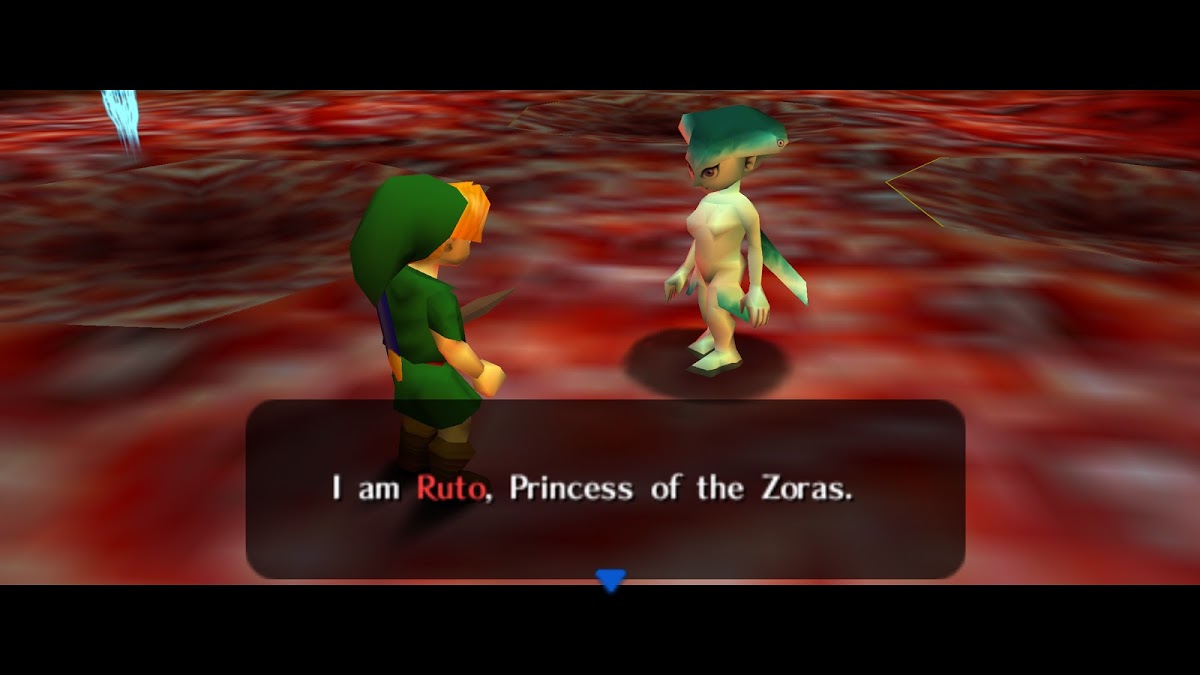 Time for some answers!
So, she says a lot, but basically, she says she'd never ask anyone to rescue her and that she has no idea about a "Letter in the Bottle" so she didn't write it. Huh.
And when I mention I'm doing this for her father, she, expectedly, get's mad, and runs away. 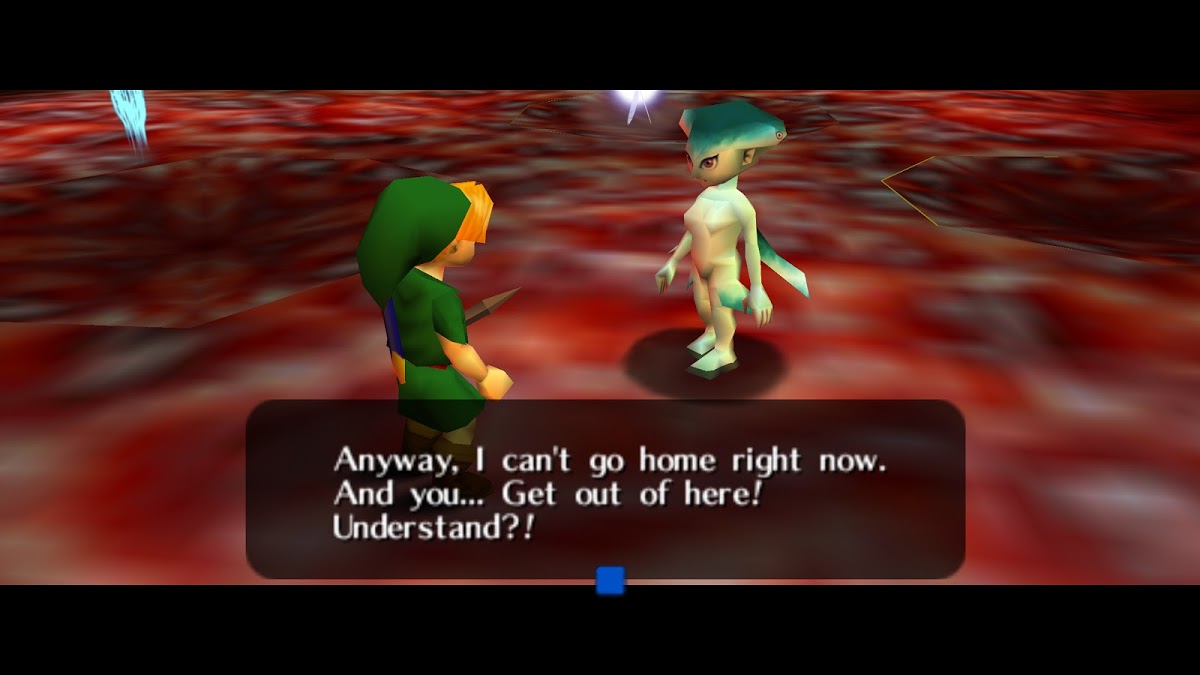 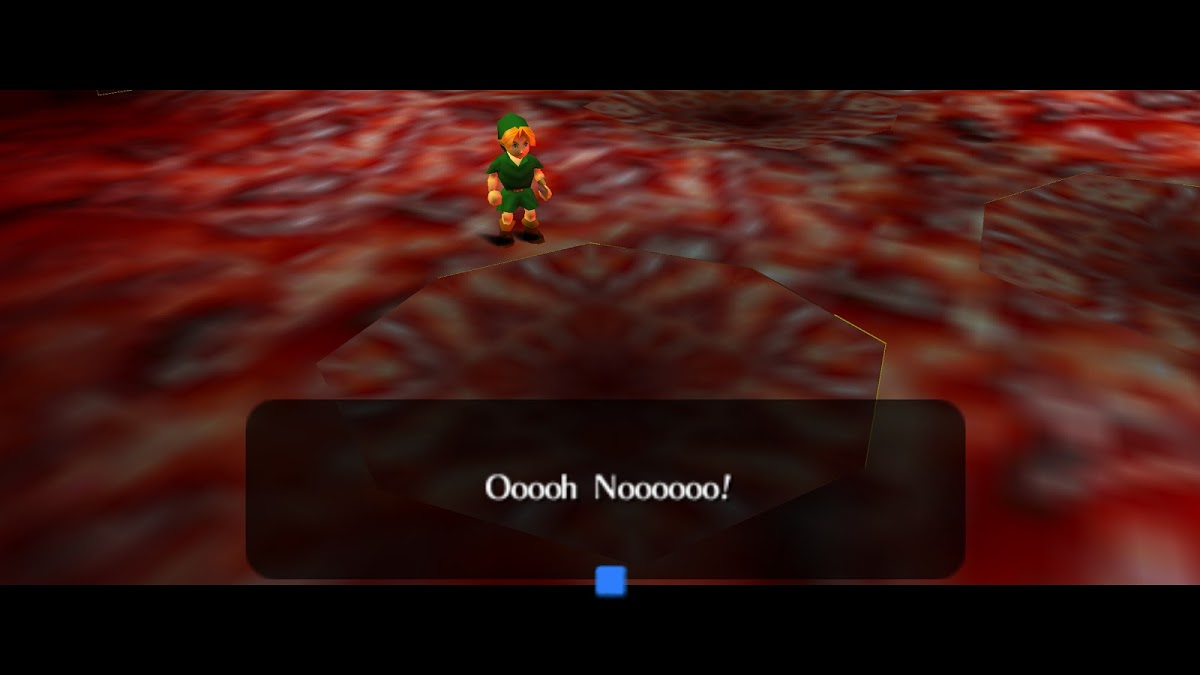 And falls down a hole.

So I jump after her (the king of smart decisions, I am), and talk to her again, and she reveals a little more. She's been going into the belly of Jabu-Jabu since she was little (again, not minding her fetishes), but now it's all messed up with some electrical monsters and things.

So now she just sits here and does nothing.
She's doing this really weird switching between rebellious teenager and helpless damsel, and it's super dumb but I'm Link, Hero of AgesTM, so I leave her alone and begin exploring the dungeon!

And lemme tell you, it is CONFUSING. There's all these rooms with wobbly, squishy, red walls and strange enemy designs we haven't seen before that all work in weird ways and there are two levels that you can fall in between and tunnels and things. And I'm not gonna explain all of it so instead here's a random assortment of images from my adventures: 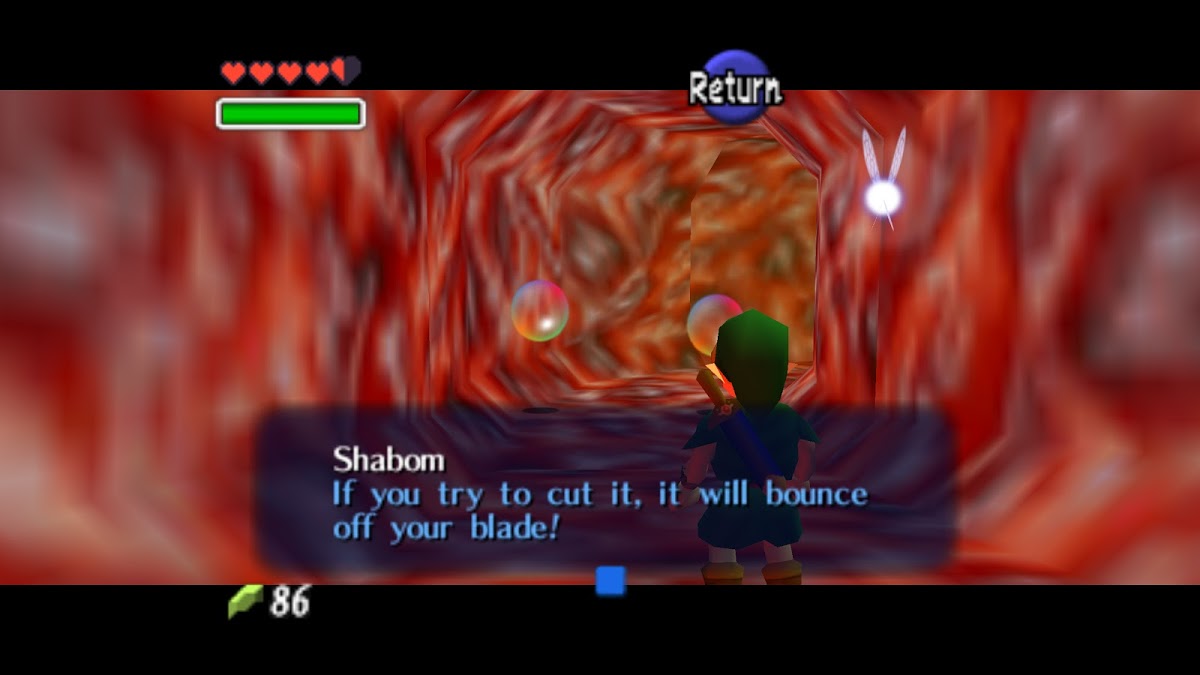 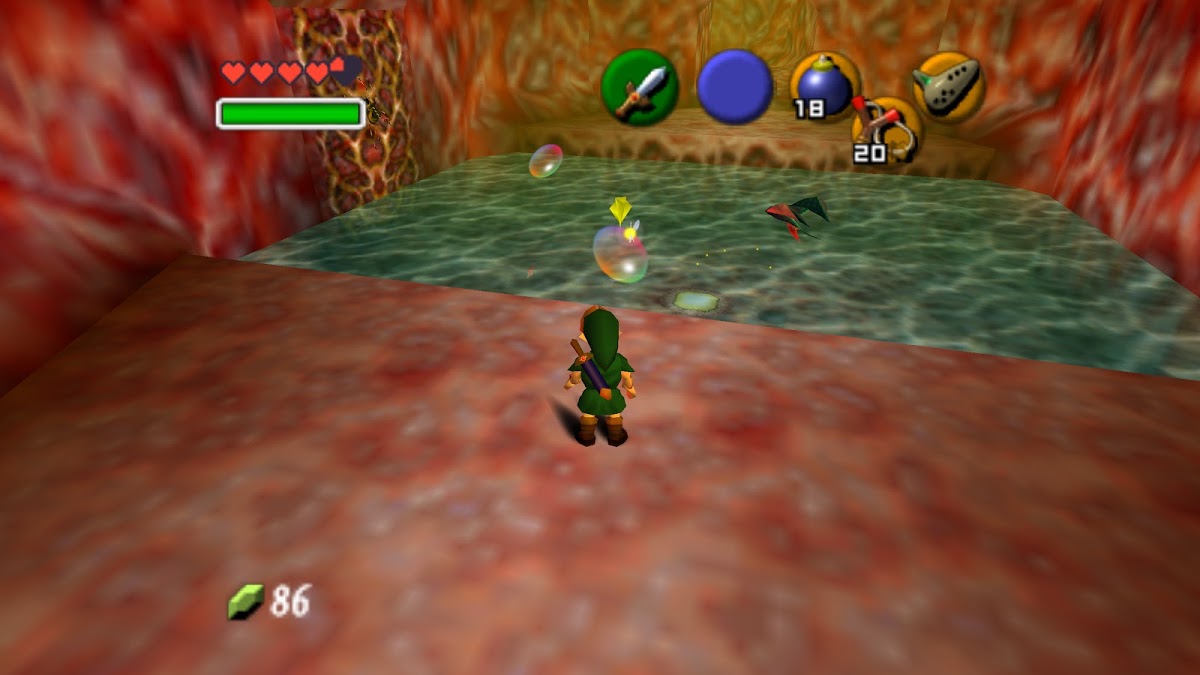 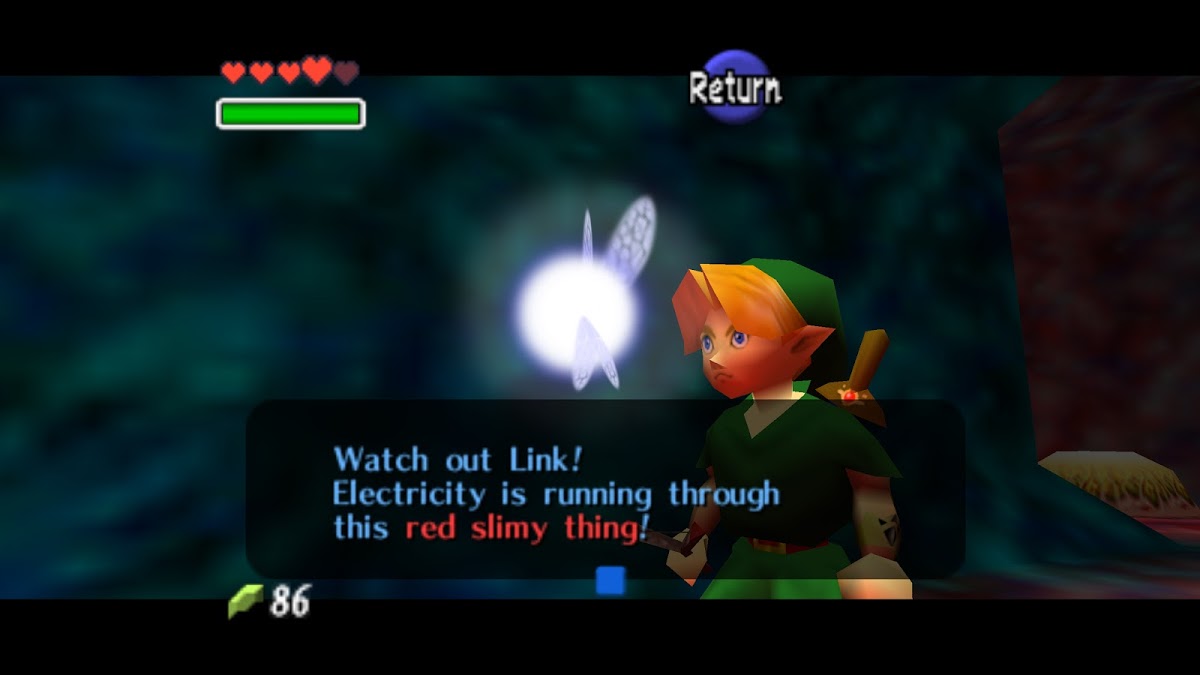 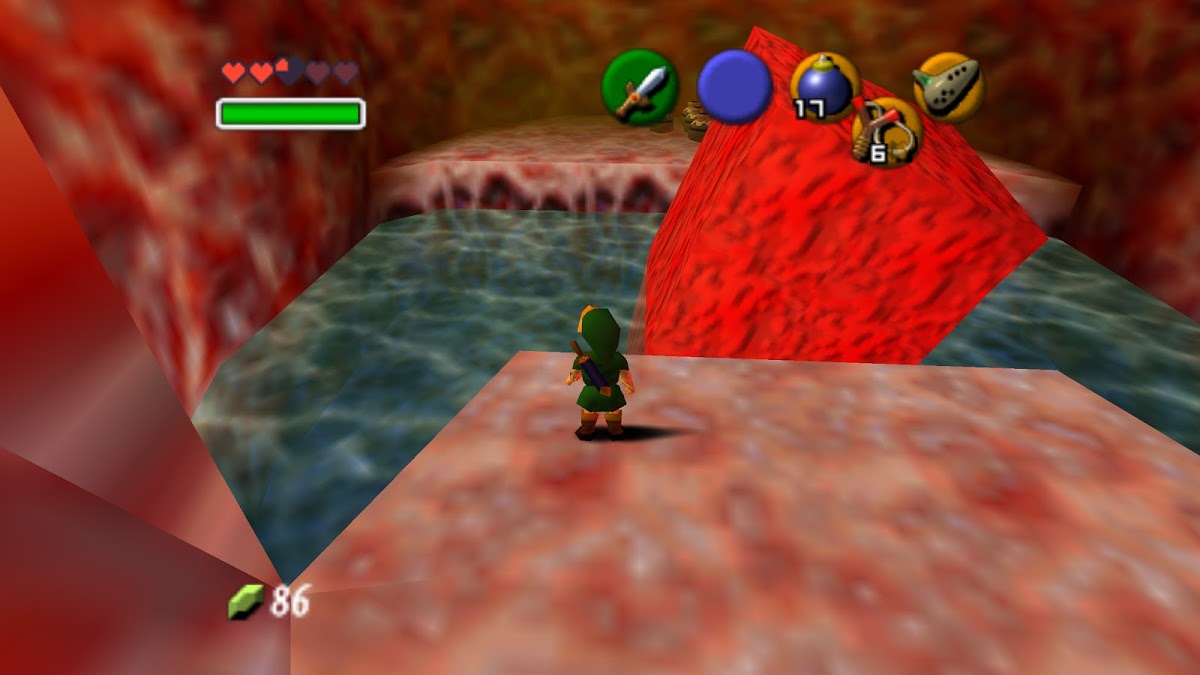 that's a platform that just started spazzing out when I came into the room.

And eventually, I circle back to her again and double-check that she's looping dialogue and... 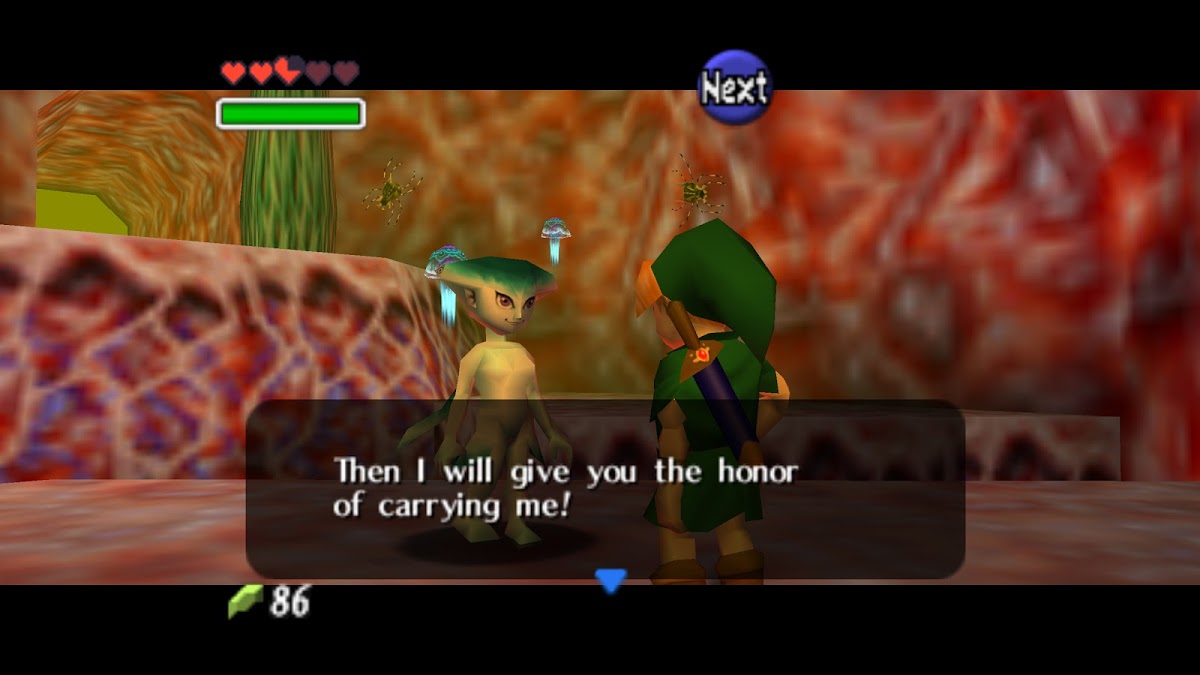 Always talk to people until they loop... Sigh. It's one of my least favourite strange conceits of games, but hey, fine. Guess she'll let me carry her now???

She sits down and I can literally walk up to her as if she was some plant and carry her around. 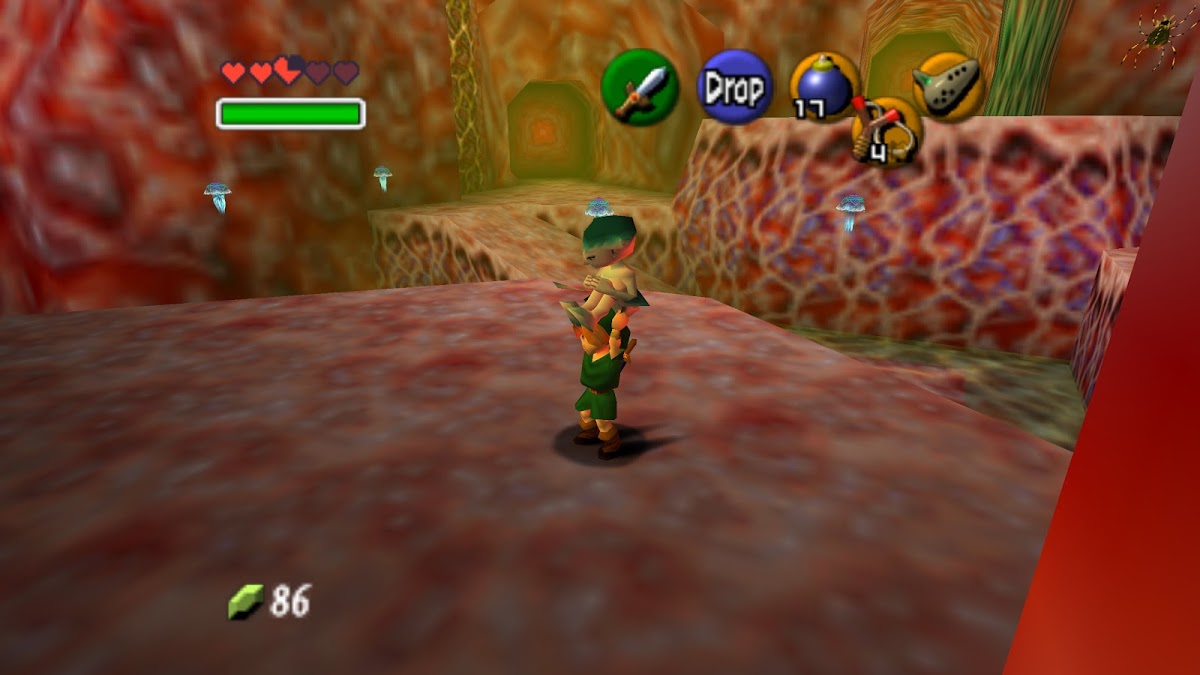 Like, Princess, you know this place far better than I do! Why aren't you helping me a little bit? See what I mean? They clearly didn't know what to do with her, and man, they had some options. A bit sad, really.

But ok, maybe she can help in some of the areas there were locked doors (because there were quite a few), so I should find a way to bring her back up.

The only problem is the first room next to her has this water puddle puzzle with a button in the middle to raise the water so you can swim to the other side.
But Link, apparently, cannot swim and carry a person at the same time, so when I press the button she just vanishes.
A little panicked that the game glitched on me I run back to find her sitting in the same spot. And she's not happy. 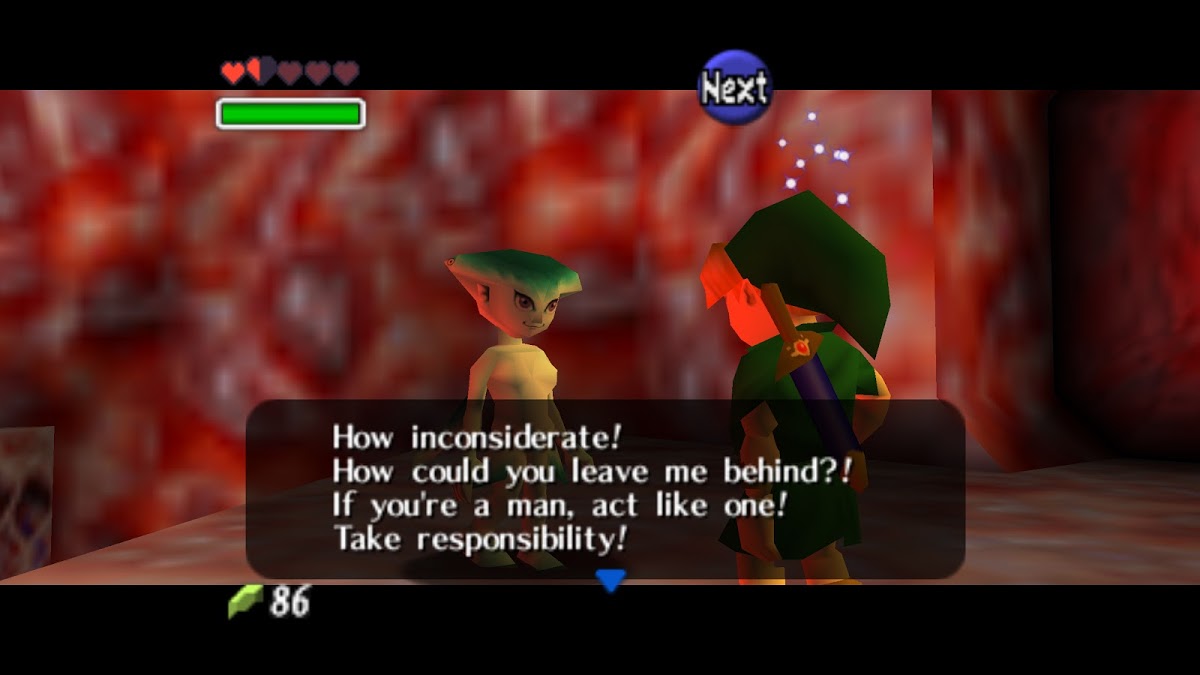 Well, lady, if you're just gonna be stuck-up and unhelpful, we'll have do this the hard way. I really didn't want to do this, but fine. The game wants me to be unkind to you, so, I'm sorry in advance, but let's do this.


See, there's this big obvious "Throw" prompt when you run around with her like there is with any object you're carrying... sooo... maybe you're supposed to throw her on the button?


I carry her back, and try to line up the throw, which is a bit hard since I have to be walking forward to throw, and throw her and miss a little bit as I can see she's just hitting the water beside the button and


Literally. Right as she hits the water.


Damn, girl. I'm sorry I said anything. You angry now. This is some Doki Doki shit right here.
I'll admit that was a little crazy :P


So I load back up just to check that my save is all good (and it is, thankfully), but I see that as a bit of a sign that this has been enough for now, so I'm stopping here.
We'll continue with the princess-throwing next time (ugh, uh, no, forget I said that).


Didn't get as far as I hoped, but the fishing distraction took longer than expected, so there was still progress. And I'm still learning things every time I play so it's all good.
Hope it's still fun to read!


See you next time!