Last time, we spent the entire episode finding the forest temple. Now we've found it, and stand right in front of it--only one thing left: How do we get in? 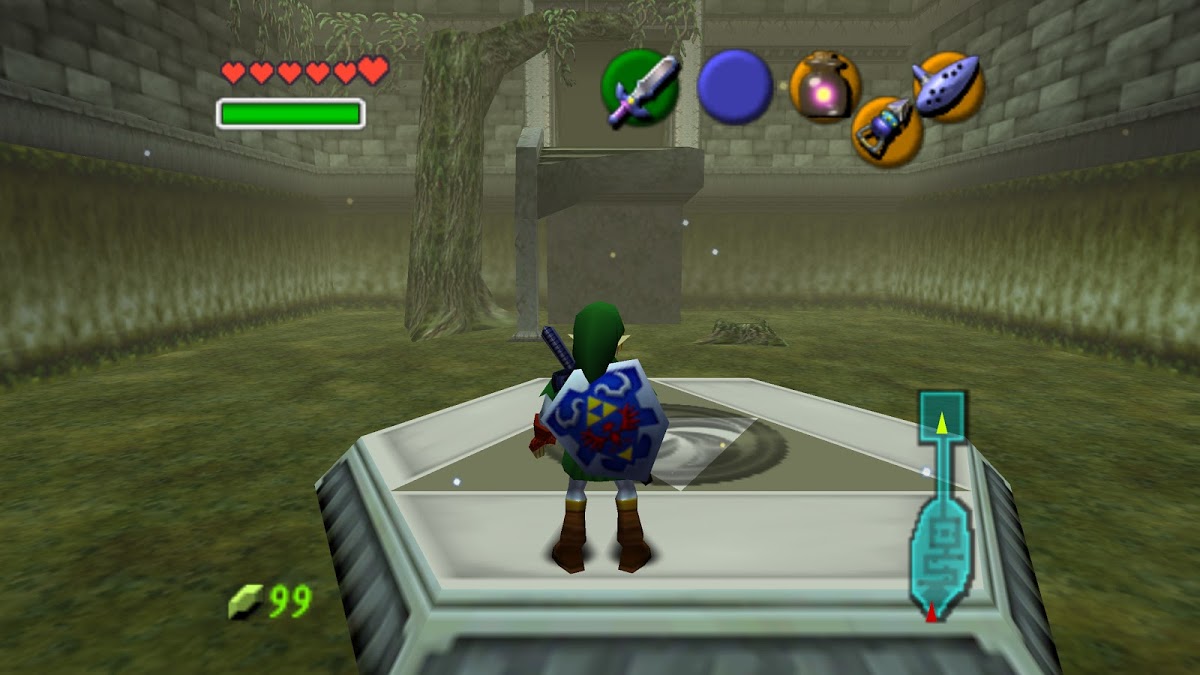 The door is, as you can see, a little high up. And playing songs, to my dismay, didn't work.

So, turns out, we gotta use our new tool. 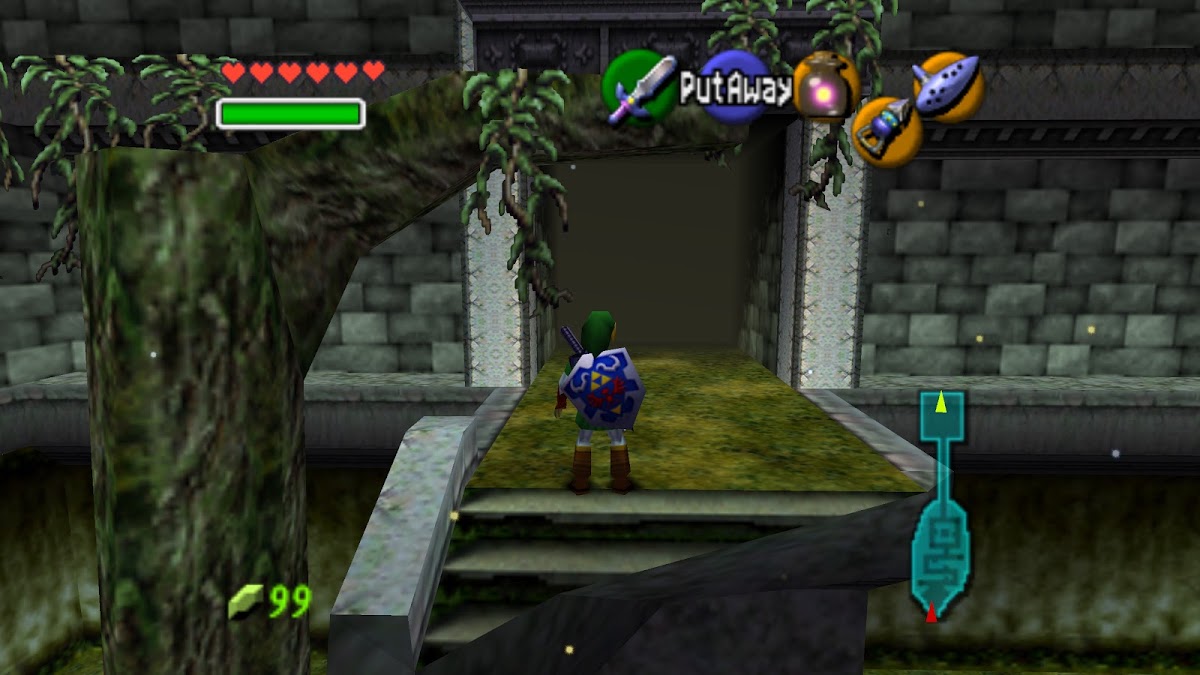 The grappling hook. Can hook onto the tree. Well, that was simple.
To greet me in the first courtyard we've got two wolves--excuse me--"Wolfoses" (Wolfosi? Wolfii?). 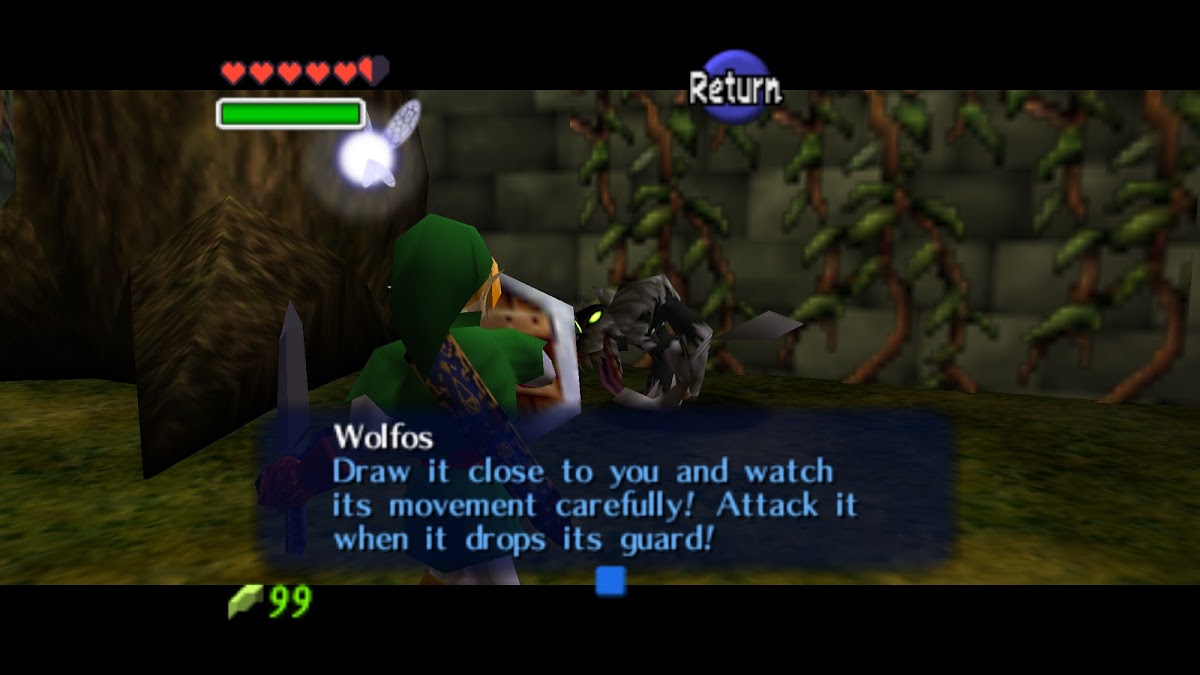 And then there's a main door, but I turn around and boogie up the vines along the wall, jump over a tree and get a key in a chest! 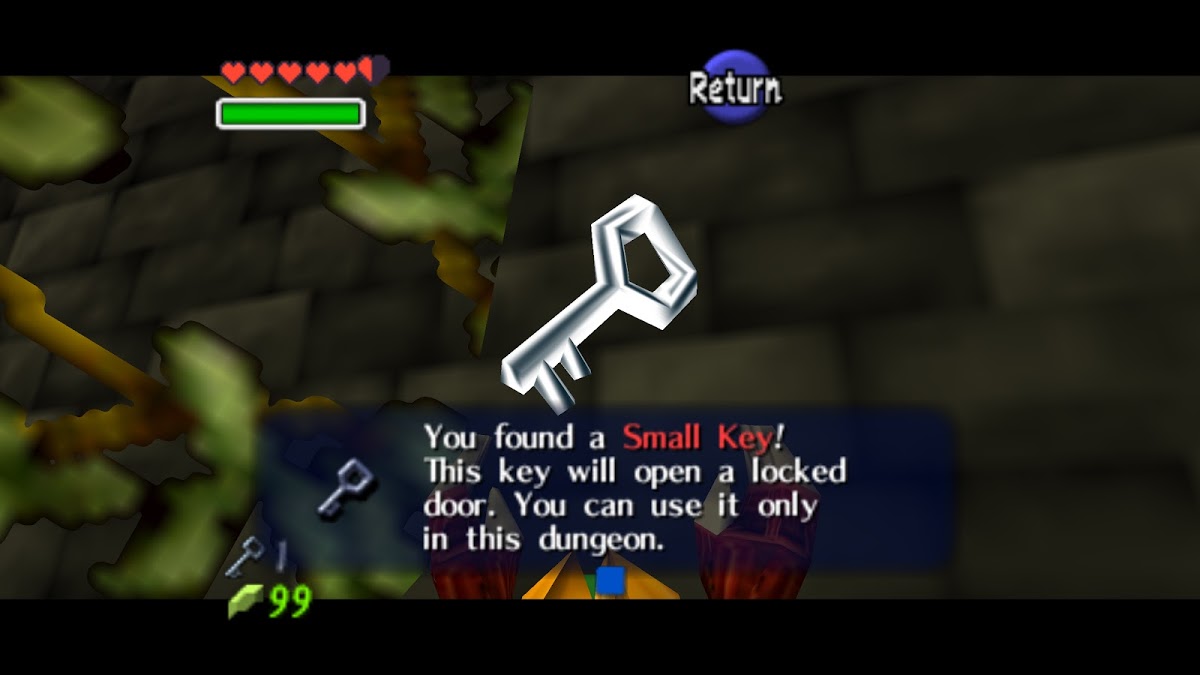 Ok, that's weird. Why this key all the way up here? Seems like odd planning. Maybe it's the classic key-under-pot trick.

(Boy, I'm glad I happened to find the outside key this early. I'd have hated having to backtrack out there for that)


Inside the main temple, there's a large... temple-like room, with four torches around an altar-like thing. But as soon as I get close, the flames in the torches disappear, and these four ghost thingy's appear and steal the flames and skitter out of the room. 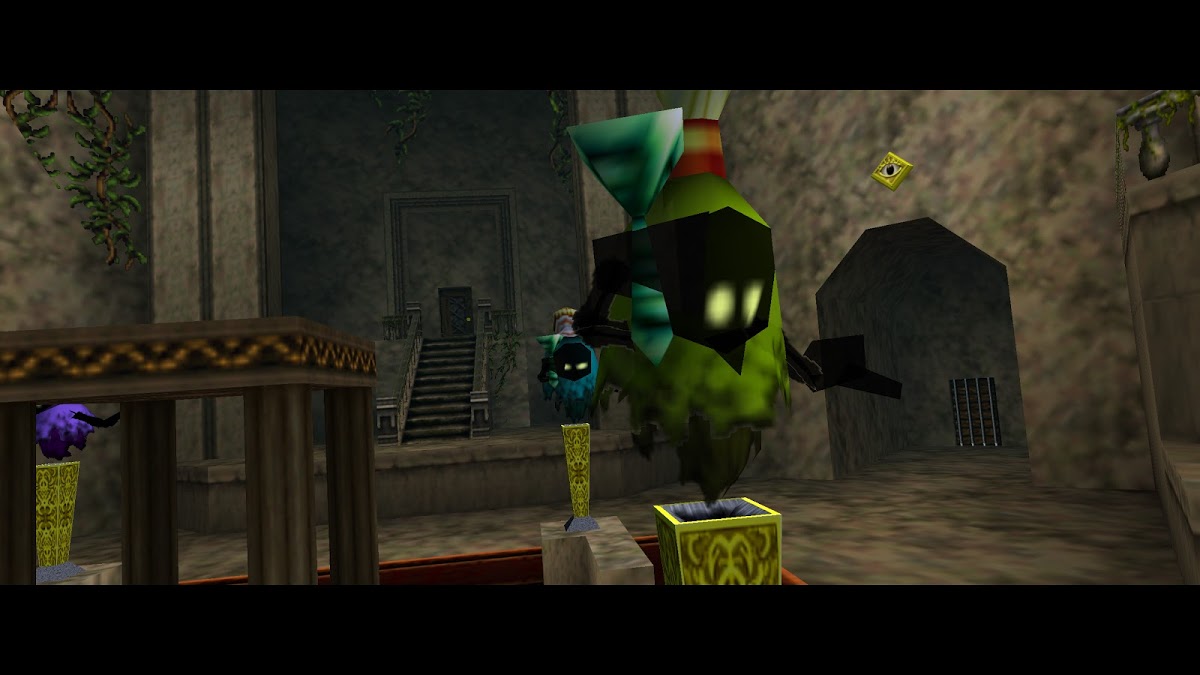 Well, that was both expected and annoying. Before we even know what we're doing, there are already ghosts in the mach--forest.

So, alone, Link is left with four doors. Let's take them one at a time:

1. Behind the first door is a series of box puzzles (exciting!) and these skull bats with the evocative name "Blue Bubble" 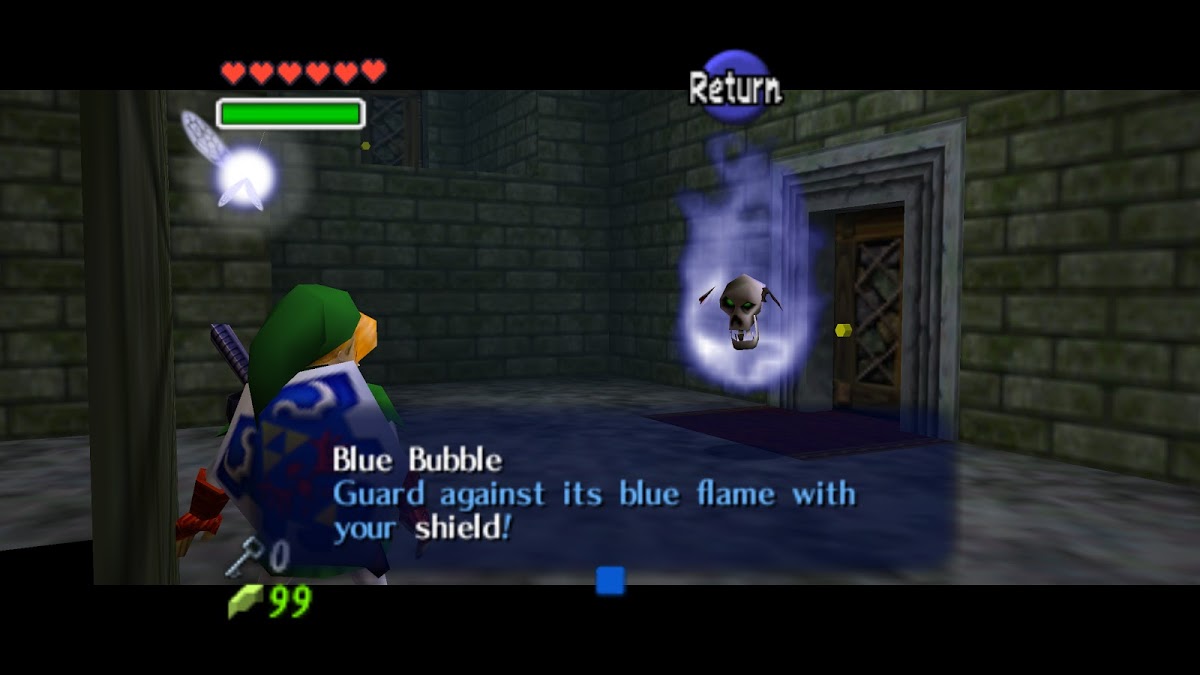 and then some ladder climbing and more puzzles, where, once again, Na'vi rears her head. 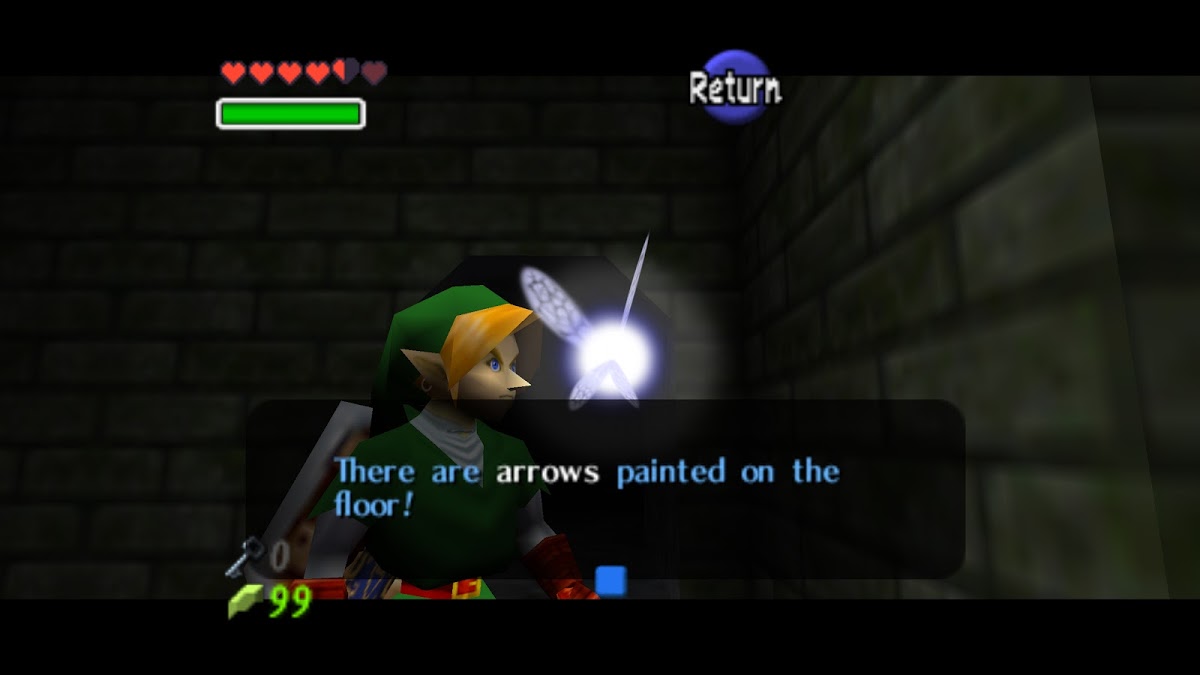 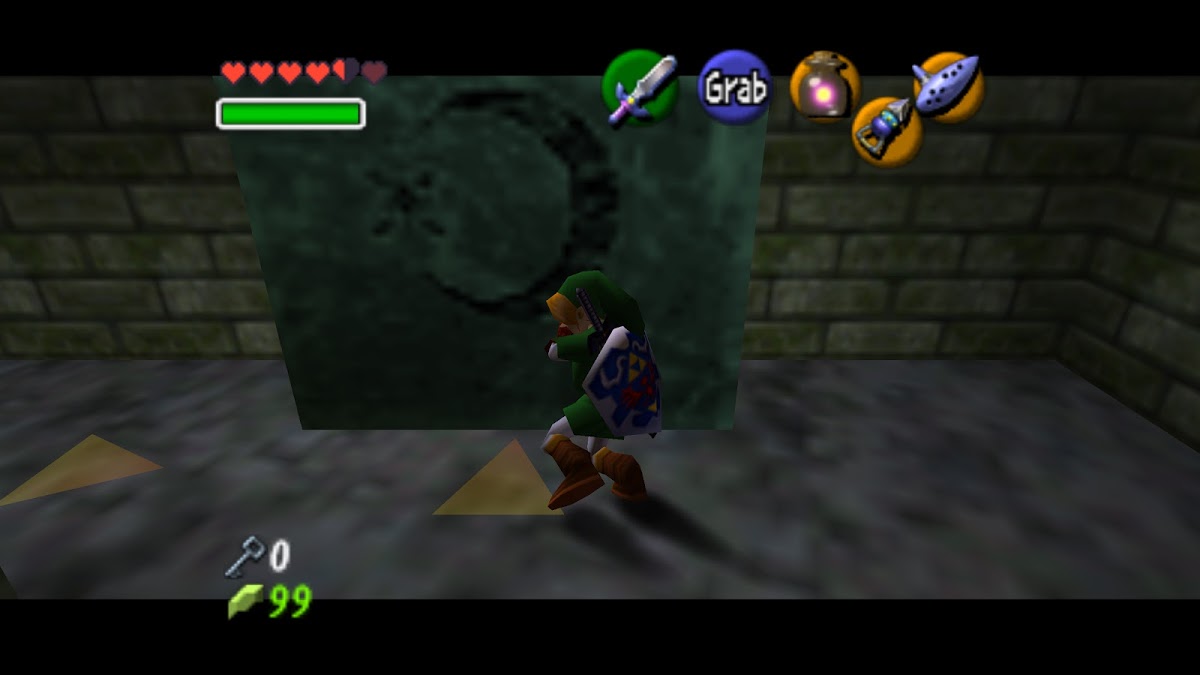 Those dem arrows Na'vi told me about! Gosh, never would've noticed 'em! And never woul'dve known to push this box down the only possible corridor!

And eventually, we get up the boxes and get to a locked door. 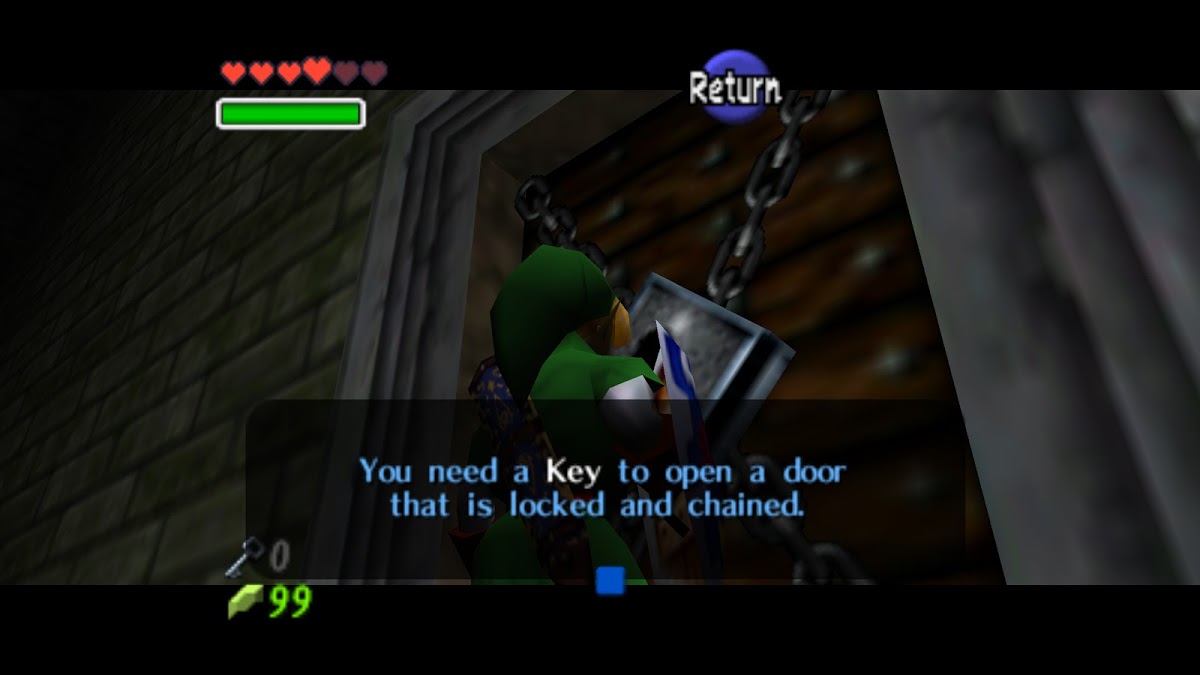 And then above the door is one of those familiar eyes I've seen before, that I needed to slingshot (or boomerang in the Whale Belly), but now... I can't equip the slingshot. Or the boomerang. I just can't. The inventory literally won't let me. 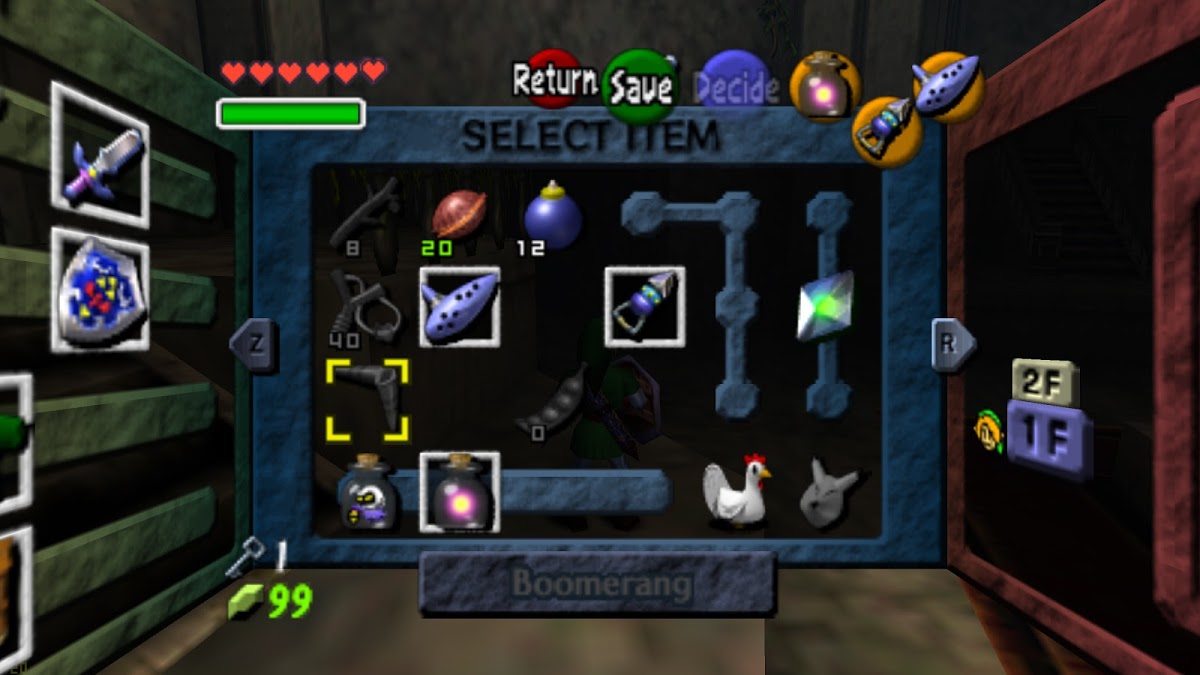 The boomerang and the slingshot is grey. When I press it, I get an error noise.

I do a quick google to ensure that this isn't some sort of bug, and then I spoil what I get later in this temple and I think that maybe it isn't (whiichhh... is bad design, but I'll reserve my criticism until the end, when I got the whole picture).
Ok, second door:

2. Behind door number 2 is another courtyard with a plant and a nut-spitter, but other than that, a well, and a vine-wall, but full of spiders that I normally would shoot with my slingshot but, now I can't... Sooo.

3. Door number 3 I can't get into at all, because it has another eye thingy above it that I can't shoot (we're sensing a pattern).

4. Door number four is a room of skeletons! Or wait, actually, they're 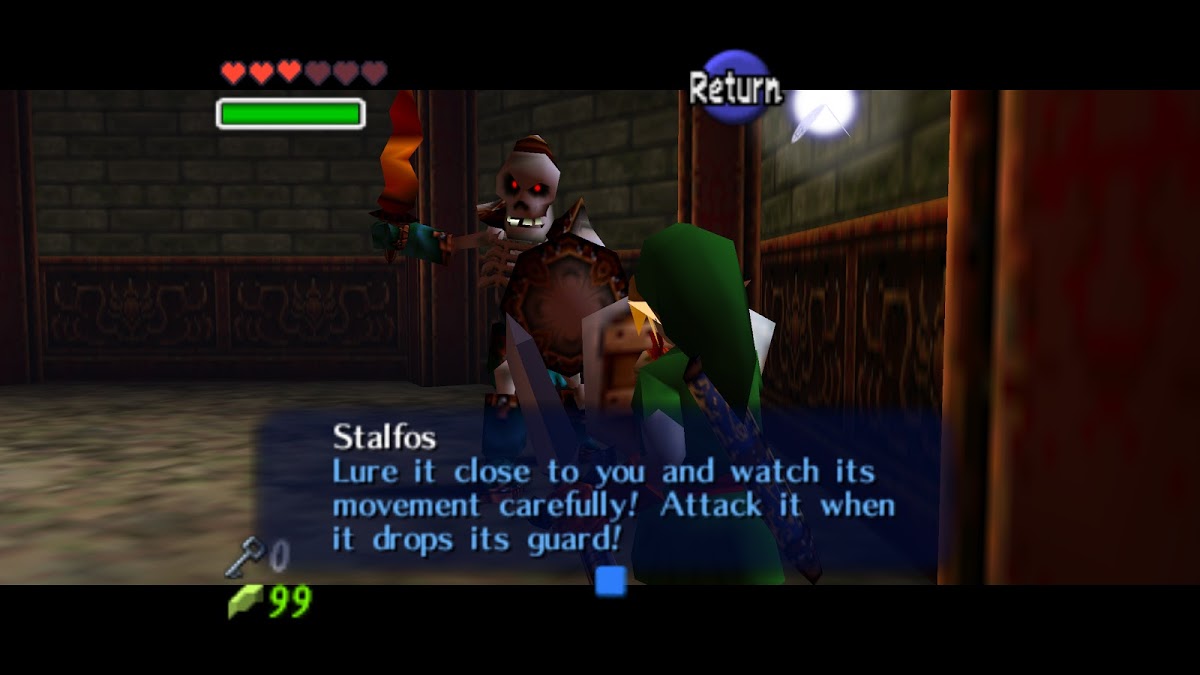 S-Stalfos? Are you Lizalfos' and Wolfos' lost brother?? Or are all the monsters just named "fos"? Like Pokemon. They're basically Pokemon already.

When all the "Stalfos" die, I get a chest with another key!

Back to Door Nr. 1, and through the box puzzles (which, fortunately, stay solved), up to the locked door and, voila, another key, to another door to 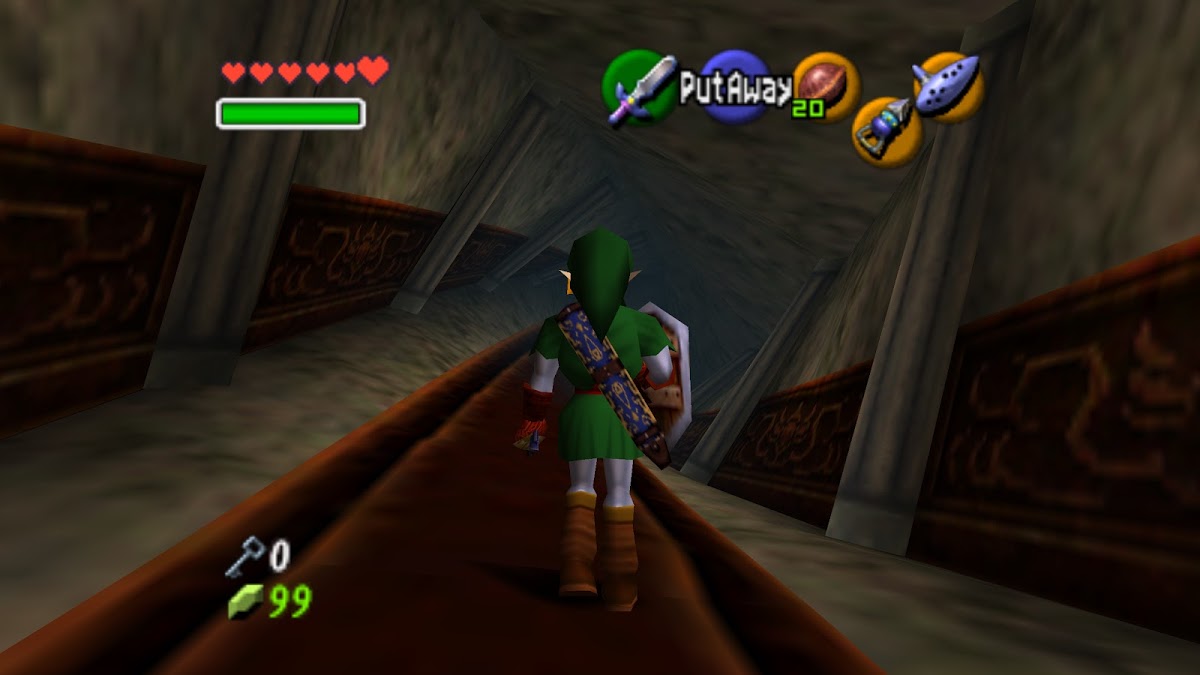 Woah, didn't know this game was about to get trippy. This is a cool visual! Also happy with Link's tiny step in this screenshot. Good tempo.

And behind, that a sideways room. 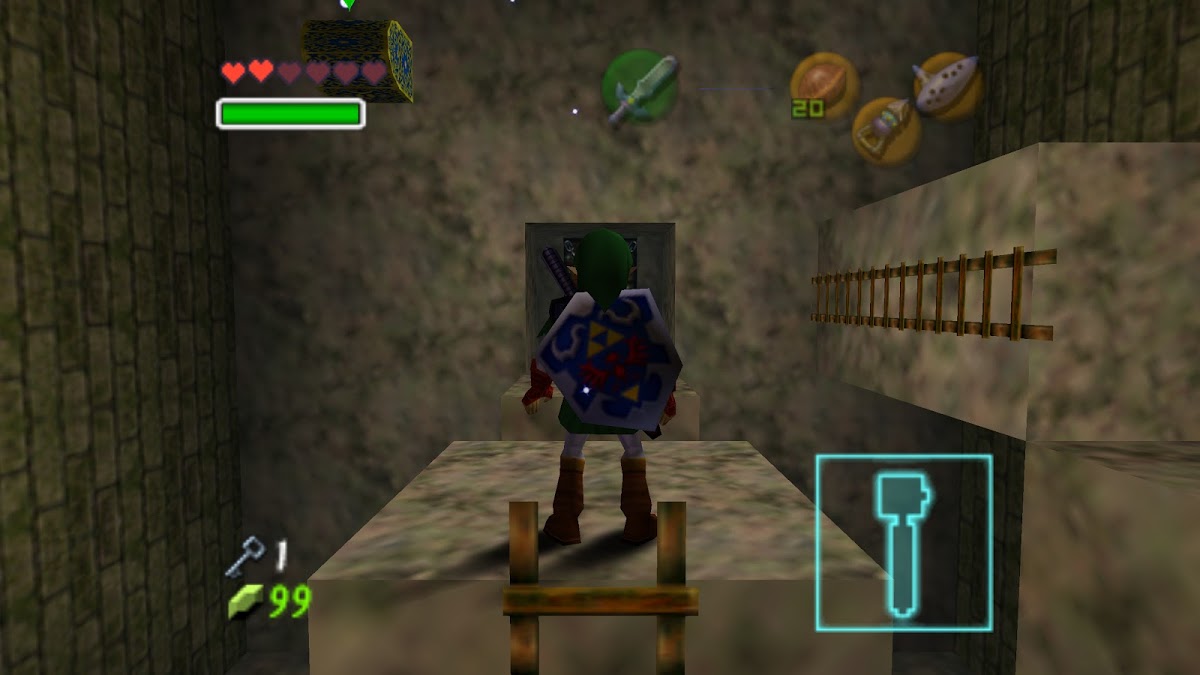 I mean, literally, a sideways room.

With another locked door. So as cool as it is, we have to back out of the room and find another key.

Stuck, for a bit, I go back to Door Nr 2, because there must be more to that courtyard other than a dead end, and then, after some experimentation, find that I can shoot the spiders on the wall with my... hookshot.
Not exactly obvious, and the wrong tool for the job, and it feels like what I'm not supposed to, but hey, it works, so I climb up, and find the Dungeon Map!
However, I'm not done, as there's another door out, and then I can do some balcony acrobatics and eventually hit a button that lowers the water in the well.

I'm... not gonna question the logic. We're beyond that. But still. Ok. Down the well.
Down the well is, you guessed it, another key!

Back to Door Nr 1, through the box puzzles, through the twisty corridor to the sideways room and open the door and go through a series of downward corridors with a picture frame at the end, with one of those ghosts from the beginning, but when I get close, it laughs that classical nintendo-cheeky-ghost-laugh and disappears. Do this 3 times, and then we get to another door and find more Stalfosmen!
But these aren't just ordinary Stalfoselii, but floating ones. 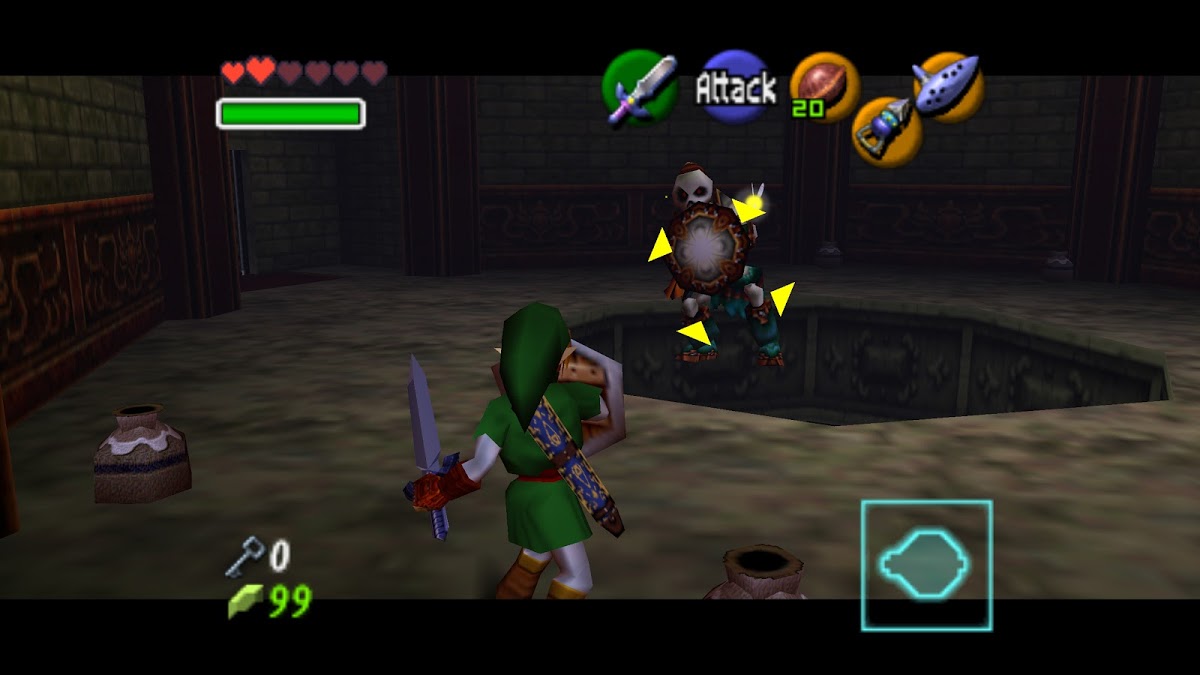 This one stands on nothing. It just does.

And I fight him and two more appear.

And this is where I'll abrubtly stop because I got interrupted while playing and I was going to stop soon anyway.
So, not the smoothest ending, but we'll get it next time. Maybe. I'm guessing two more episodes in this Temple. It seems to be a bit bigger than the ones we've been in before. Or maybe I'll just cruise through the end of it, but I doubt it.