Last time, we failed to kill a ghost-man. This time, we'll kill a ghost man. I promise.
But first, we need arrows to kill said ghost-man.

And arrows, we, heroically, buy at the shop.
That we have to get to.

But it's ok! I have a plan! This isn't going to be another hour-long run to get seeds!
No, because I got 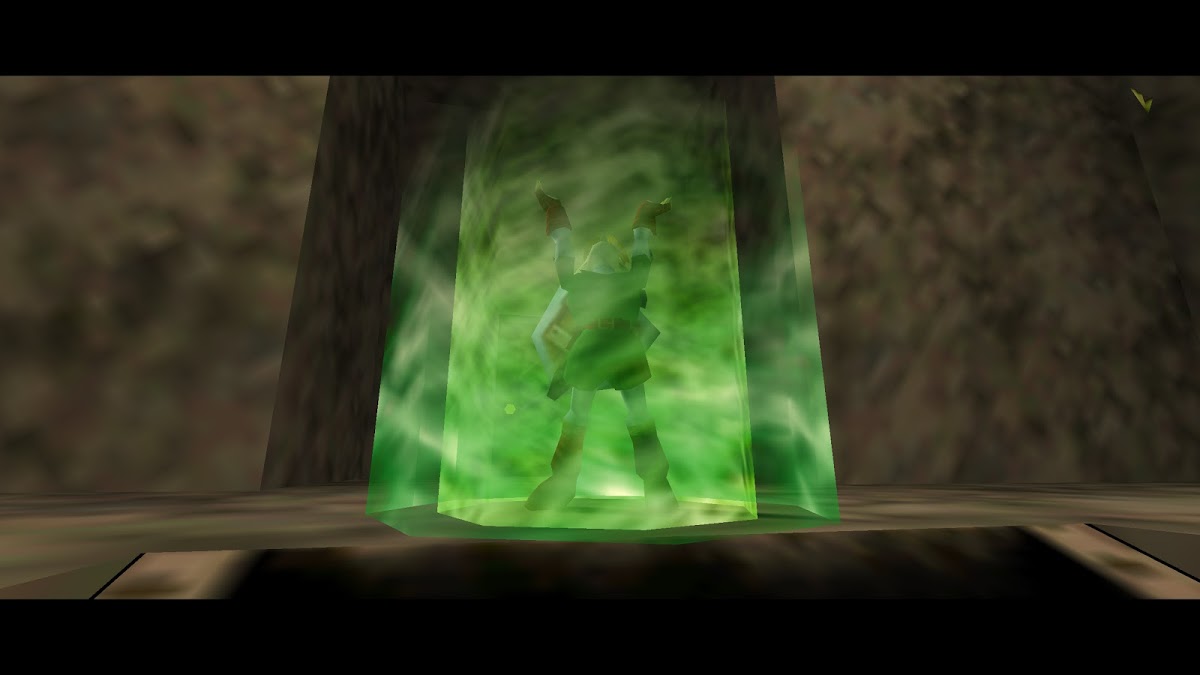 See I got this spell a while ago from the lady I want to ask questions about fairies, and it allows me to teleport to the location where I first cast it, sooo, if I cast it in here, then run back out to the shop, then I can do it lickety-split and no one will notice!

Remember those cat people? Yeah, he's now turned around and is shooting ground-spikes at me as I run out, and for some reason I find him way harder to dodge now. Ok, wait, wasn't there...

I check through my series of spells, songs and equipment. And find this song called "The Minuet of the Forest". Wasn't that... didn't that do something useful? Or?
For the heck of it, I play it, and guess what it says! 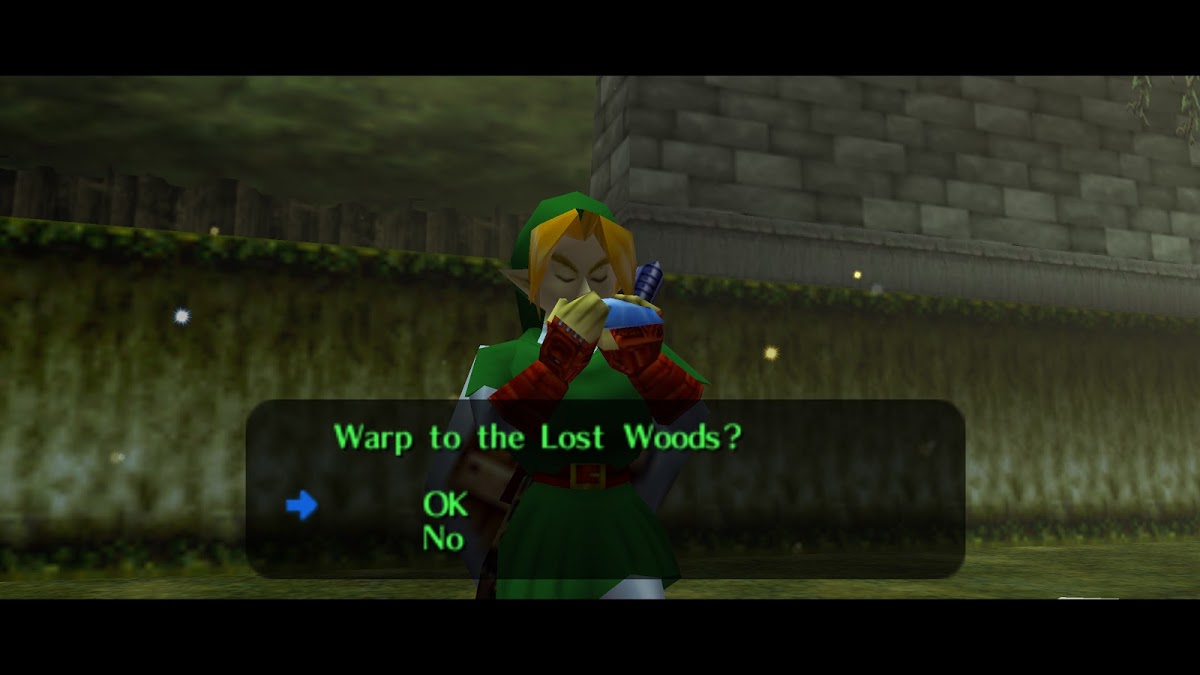 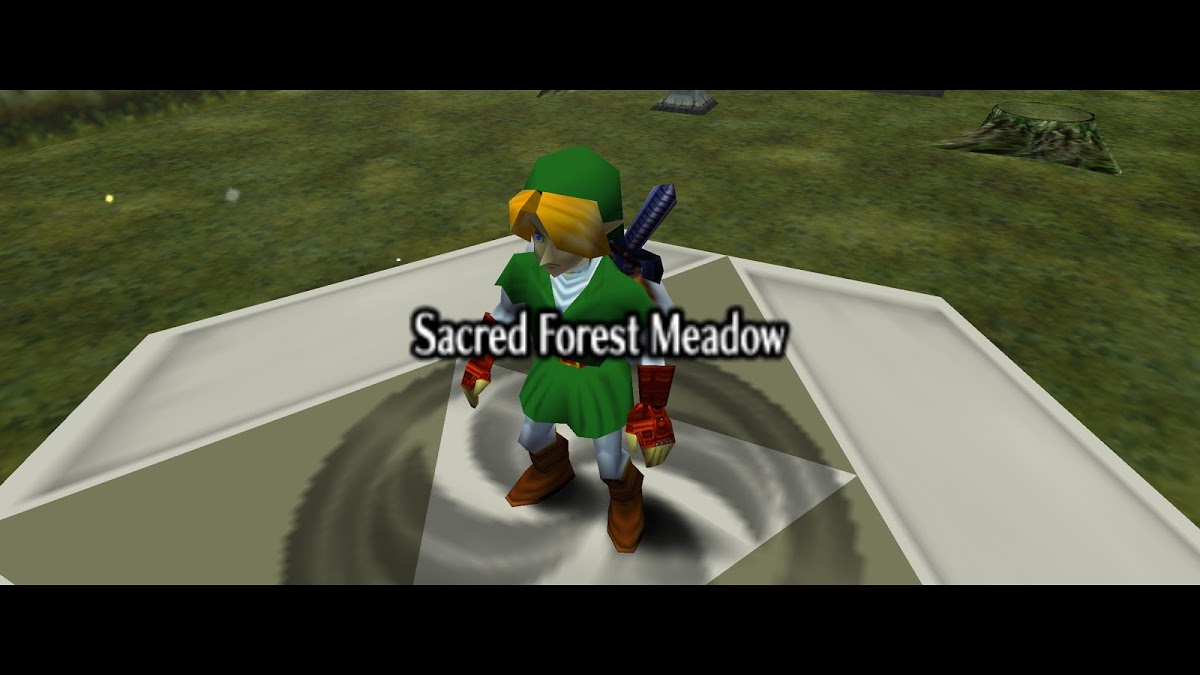 Oh. Literally teleported me three feet to the left. Nice. Welp, looks like I have to go through the cat-man.

And I did, finally, after dodging his bullshit for a bit, and ran out the maze (and got another fairy on the way!), out to the shop and bought arrows!

So, time to warp back to--Oh, I can't. That spell there, I suddenly remember, doesn't work in dungeons. It, oddly, allowed me to place the thing in a dungeon, but I cannot teleport to it.
Good thing I just learned another way to teleport there! Song back, whoop, through the temple, down to the basement, and up to fight a ghost. 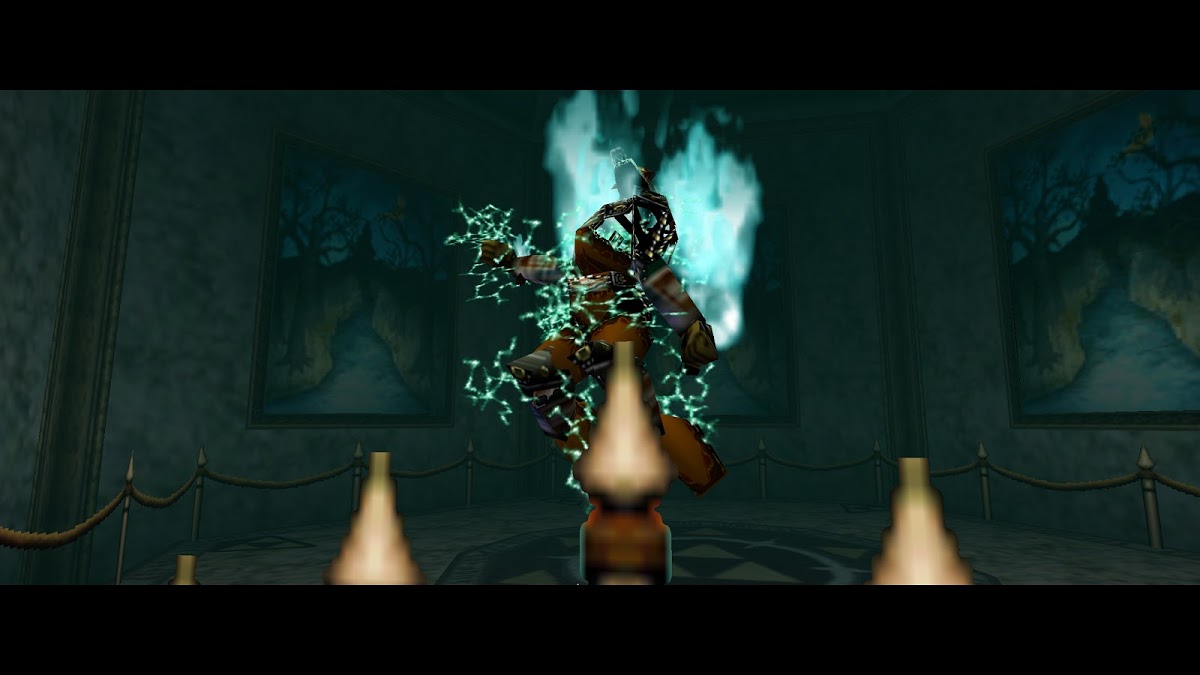 Whoops. Did that on first try.
Once I got the hang of the tennis-timing, this fight wasn't that hard. And there was no more to it, 3 horse-running-lightning-phases, and then a tennis-with-a-flying-ghost-phase, that lasted until he died.
SOooooo, yay! Temple down! Let's see what happens when we complete a temple! 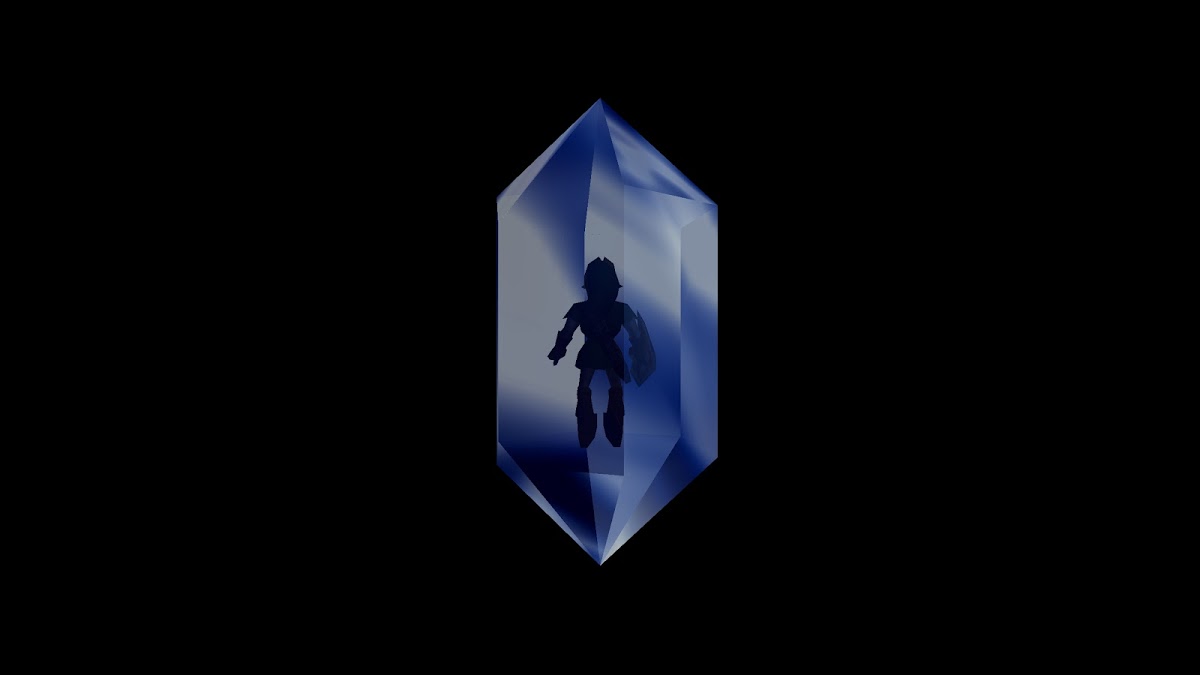 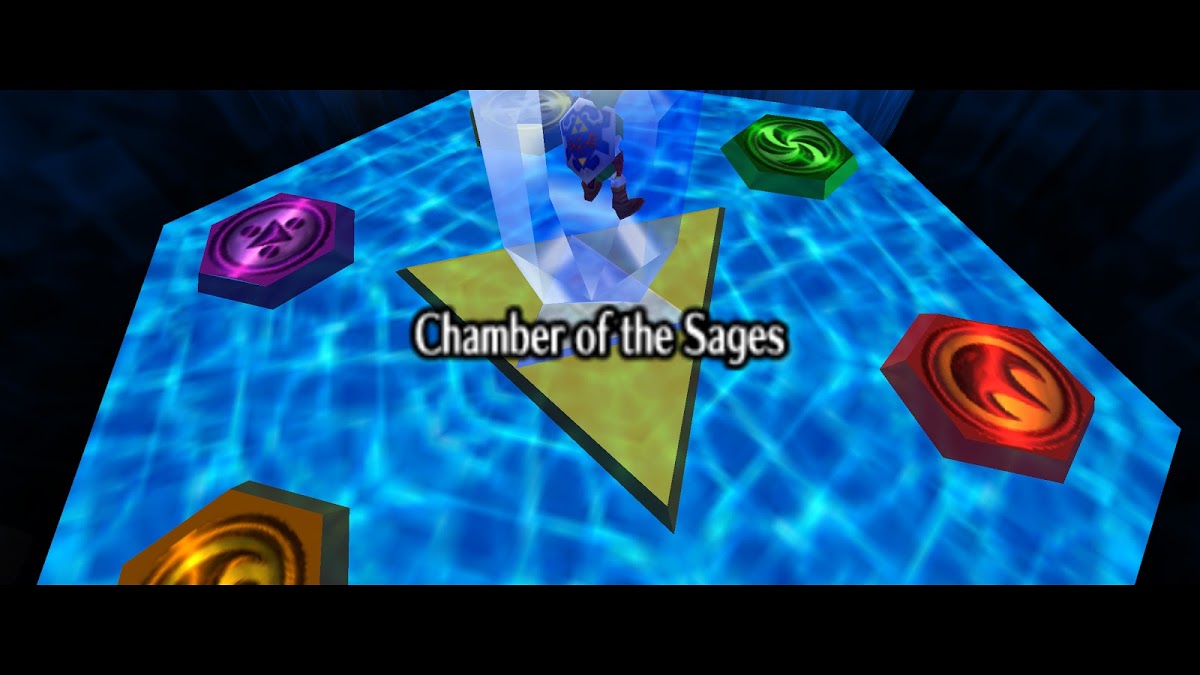 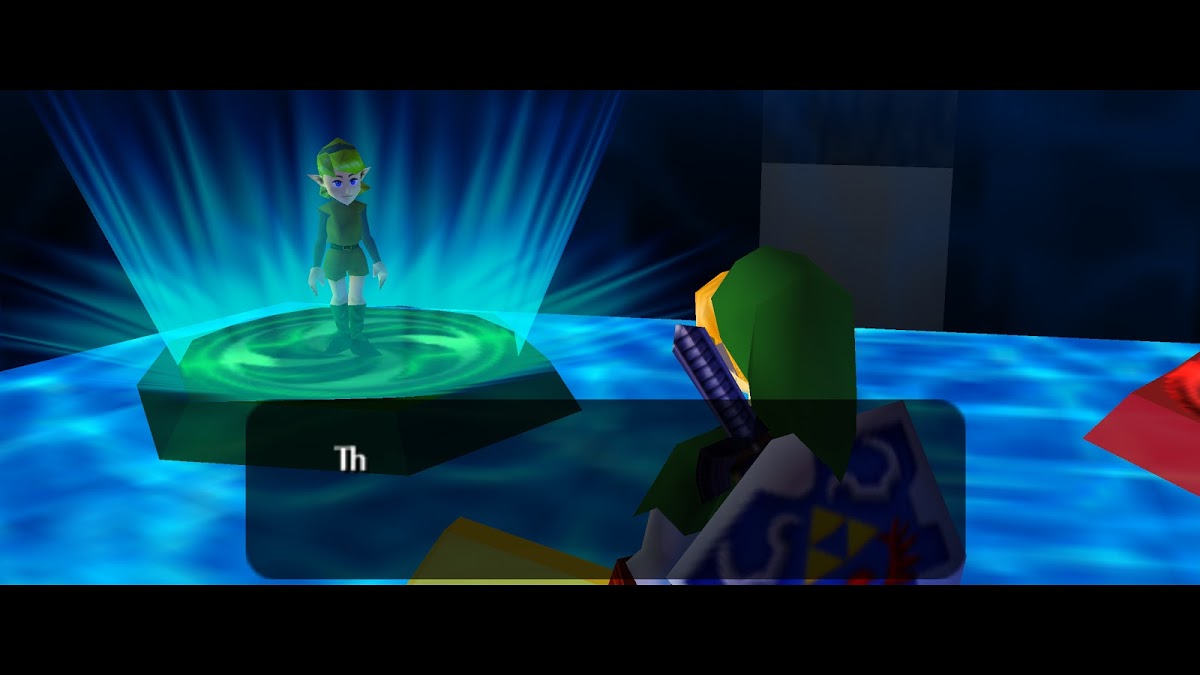 Oh right you were supposed to be in the Temple! What are you-- 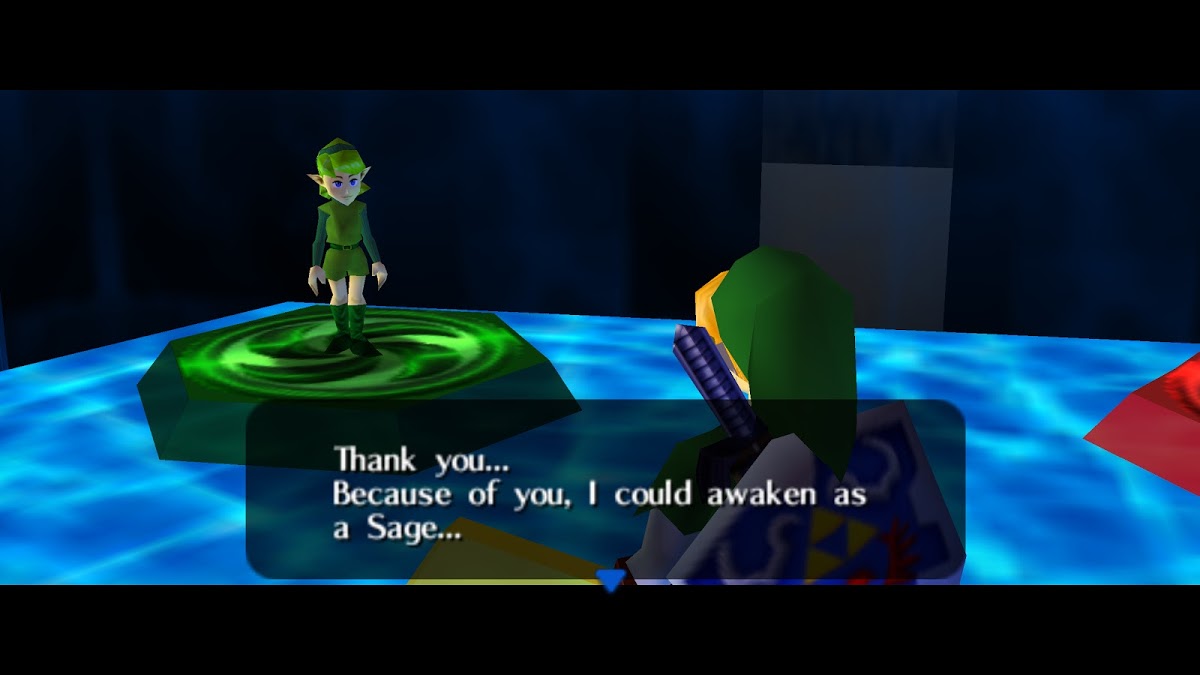 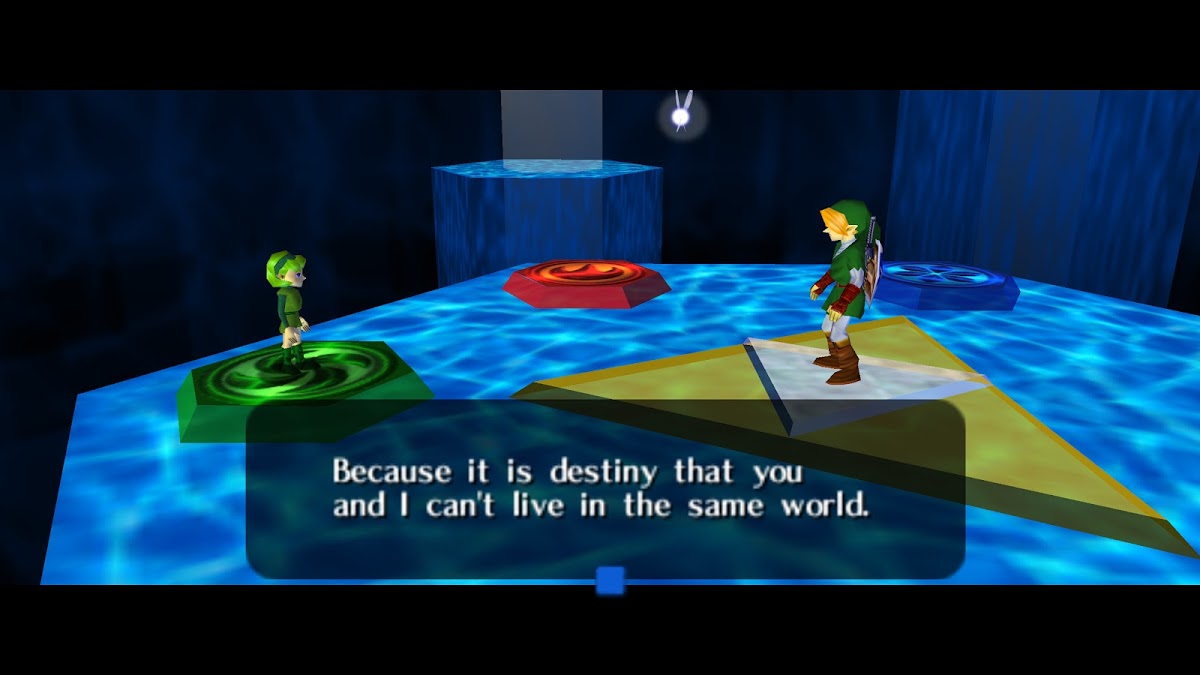 Now we're just making up destinies. Also you're also still a kid. Where've you been all this time? 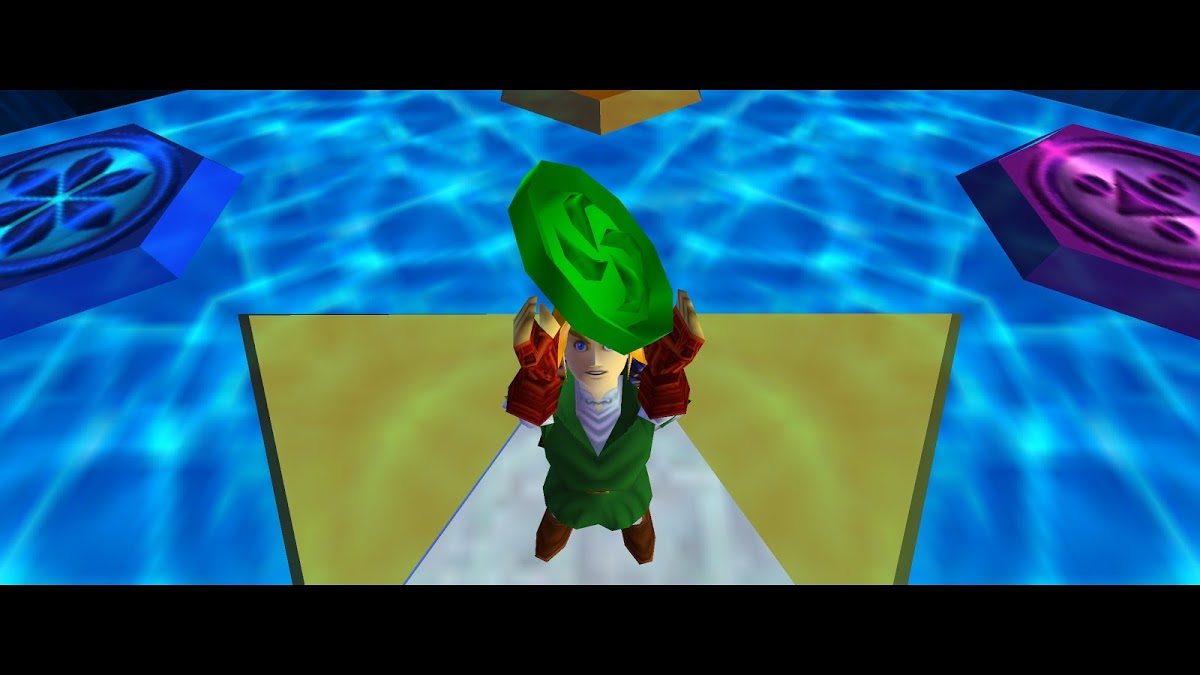 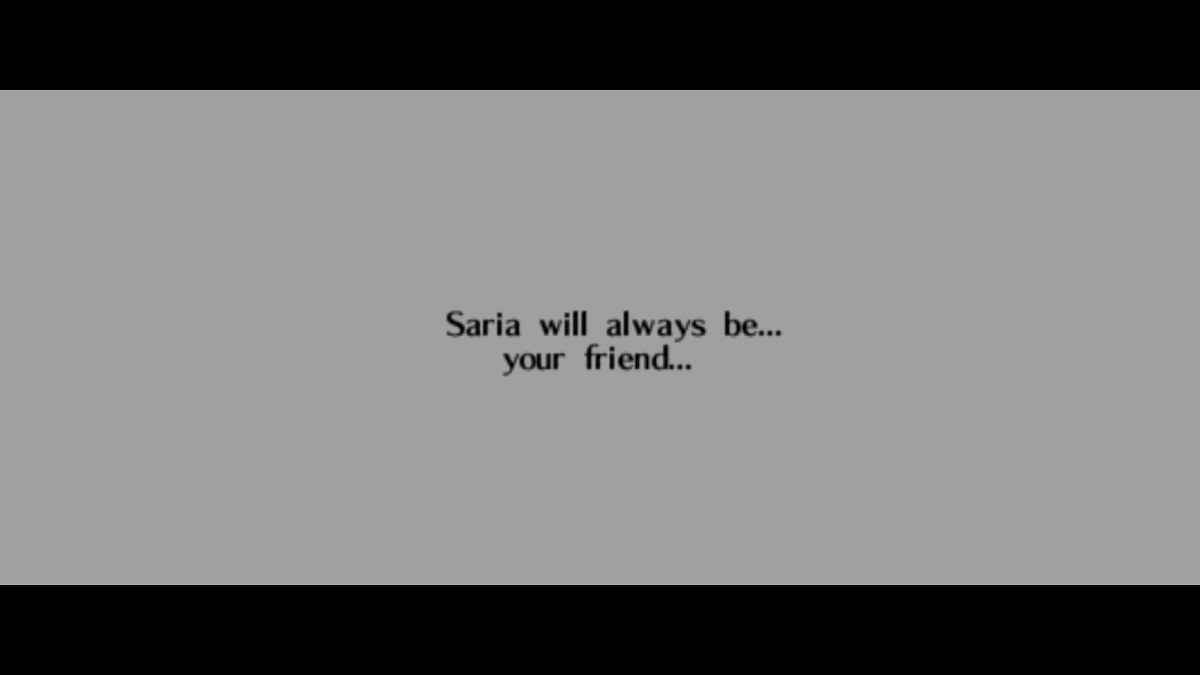 And then it spits me out by the dead Deku Tree, and what's the first thing Link does? 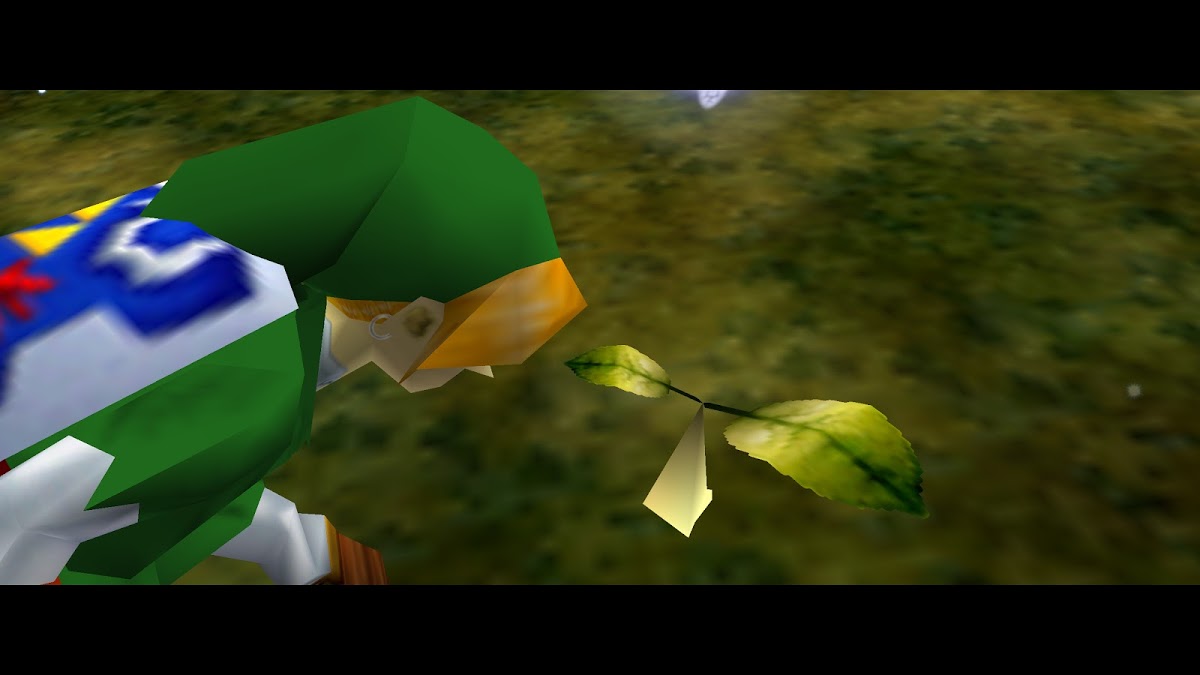 Goes and looks at an ominous looking sprout. As you do when you've just seen your childhood friend become an all-powerful god-being, we go look at tree-- 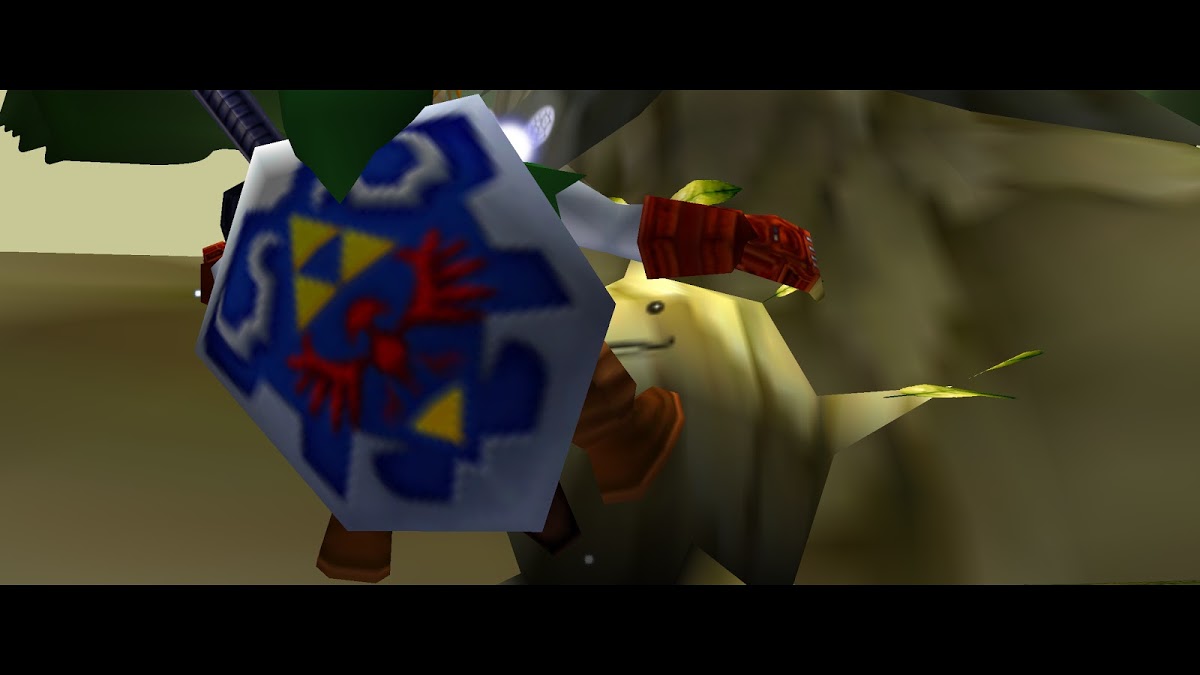 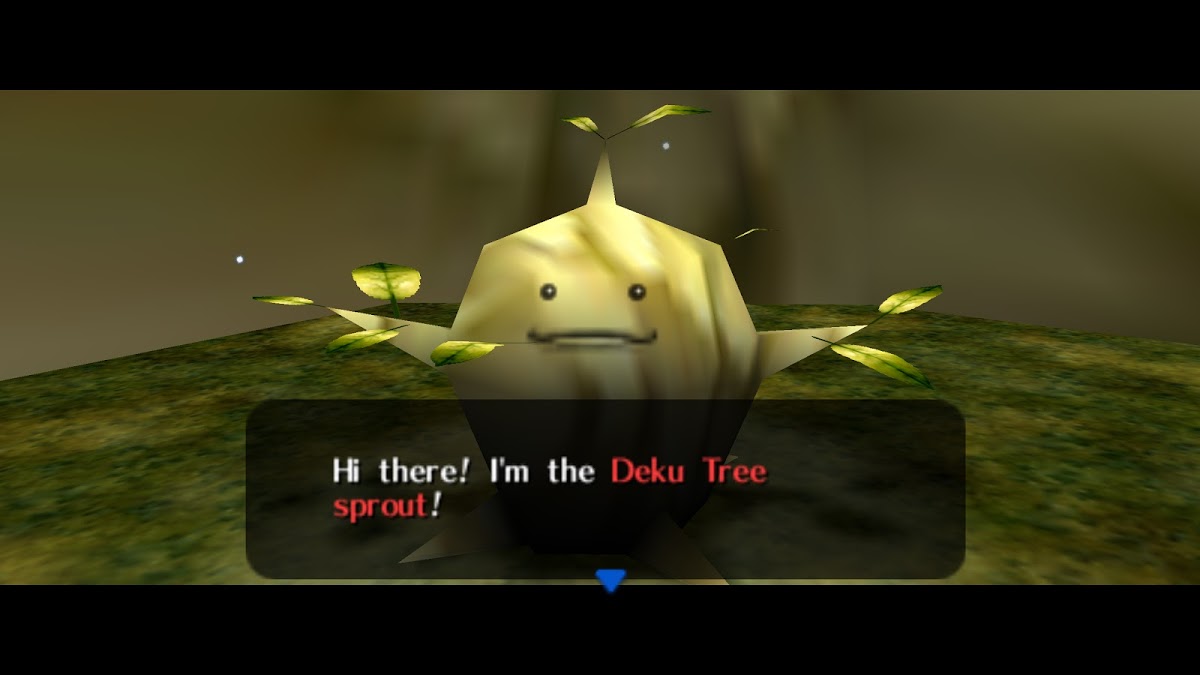 So, apparently, with the ghost defeated in a separate area, a new Deku Tree can grow up (don't bother removing the dead one!), and this one apparently knows enough to drop some lore on me!

And this time, it's actually answers a question I asked! If you would believe it.
Because he says that there's actually a reason that Link's grown up and all the other Kokiris in the forest haven't. And, surprise, it's because I'm


Actually, it's because I'm "Hylian".
Soooo, there was some nondescript war at some point before Hyrule was unified (apparently), and an injured woman (a Hylian) left her child with the Deku Tree, and the Deku Tree sensed that this was a Child of Destiny (not nearly as cool as the real one, tho), so it took me in. 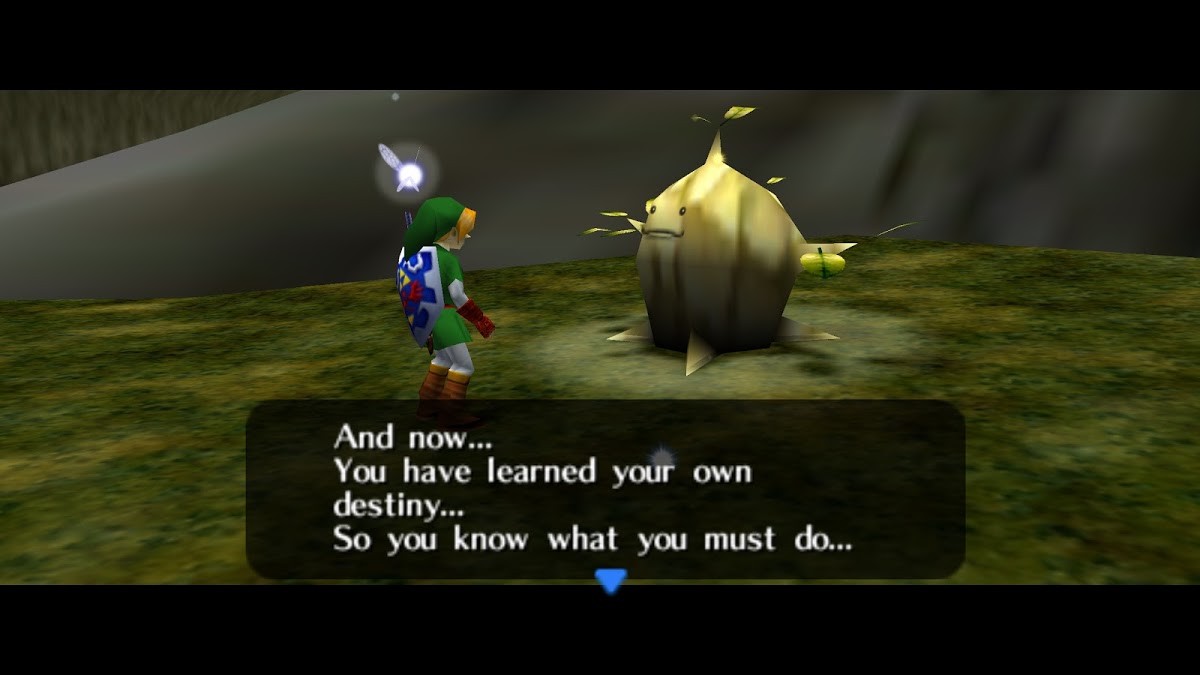 I like this assumption that because I know who I am I know what I need to do? Like, sure, instead of a Kokiri as I always thought, I'm now the son of some unknown mother from a war I've never heard of and you expect this makes me more sure what I am?? 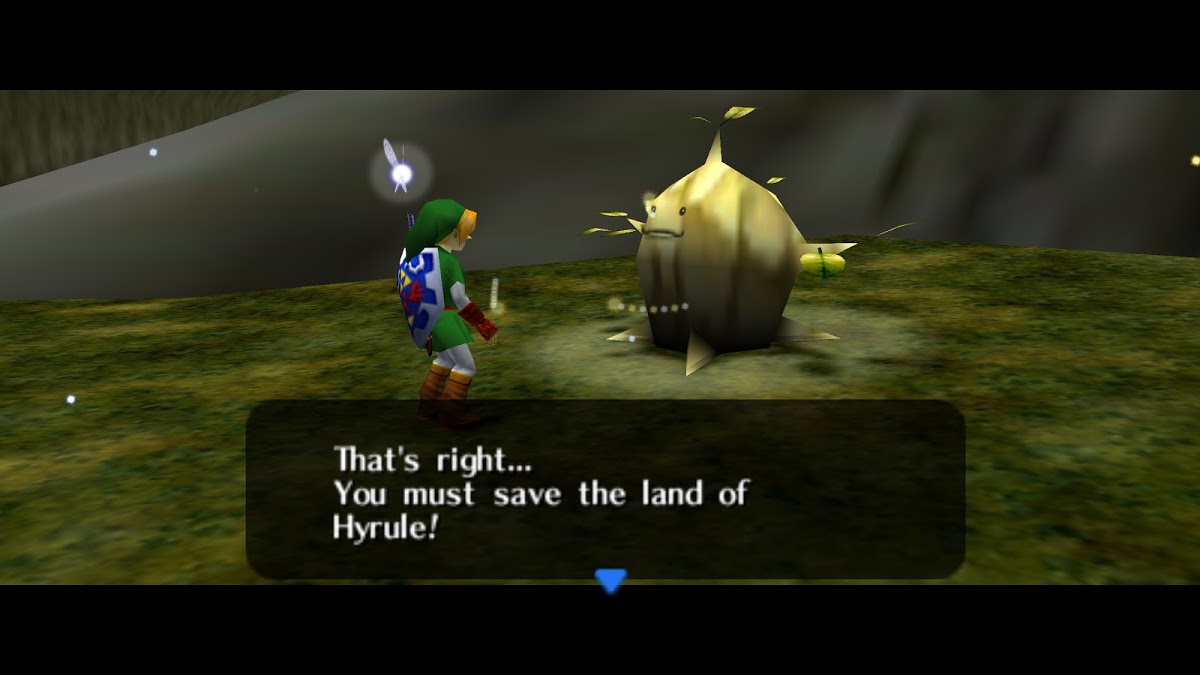 Oh, right. That thing. I'll get to that on my own time, awright? I got Heroing to do.


Like go back and expect salves of applause now that the village is clear of monsters. 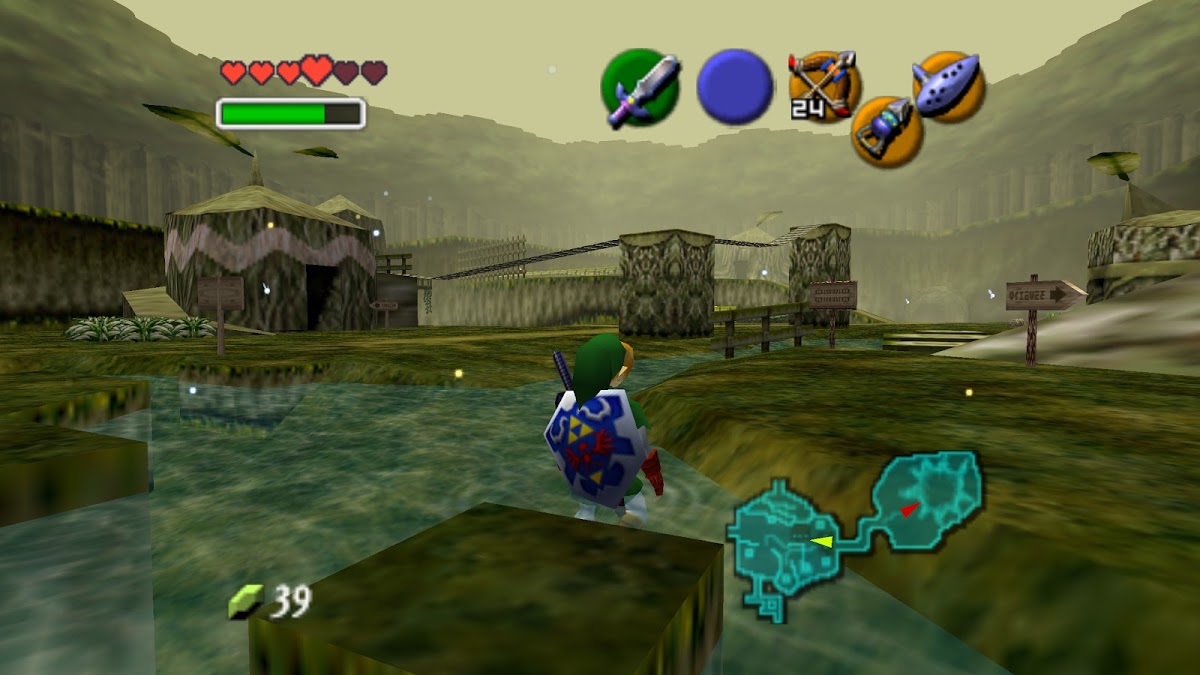 Well, it's clear of monsters, at least! 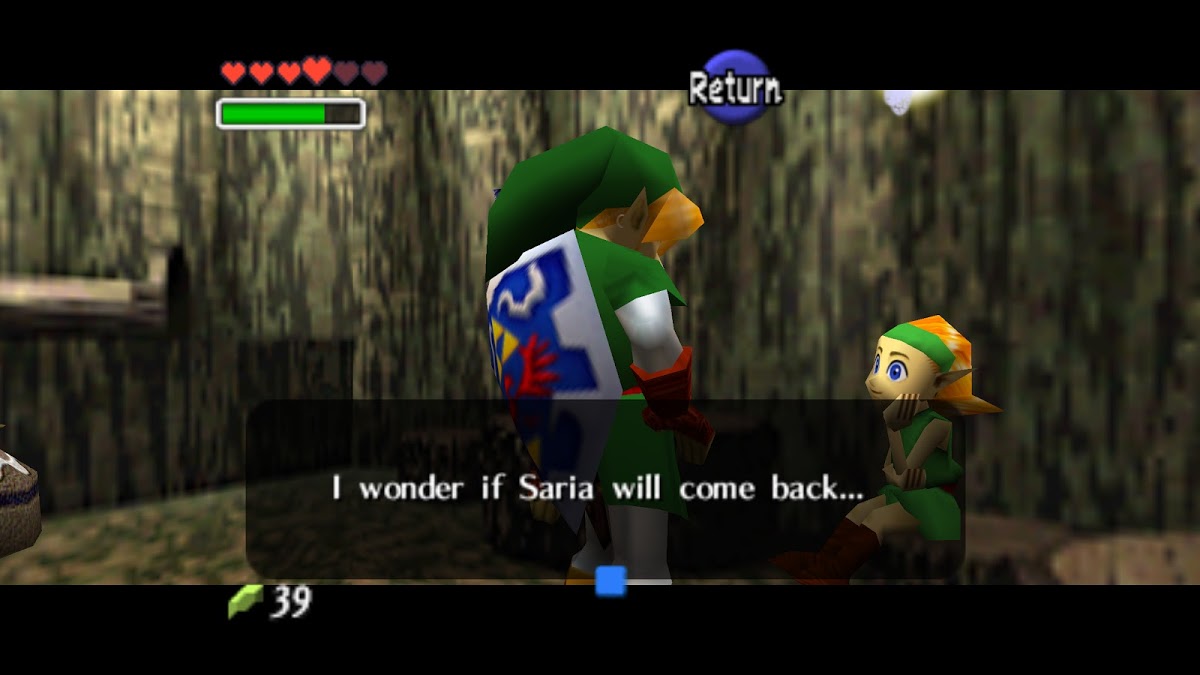 What about me???? I just helped you!! Ungrateful children.

So I got the hell outta there and went back to the things that matter: The Temple of Time. 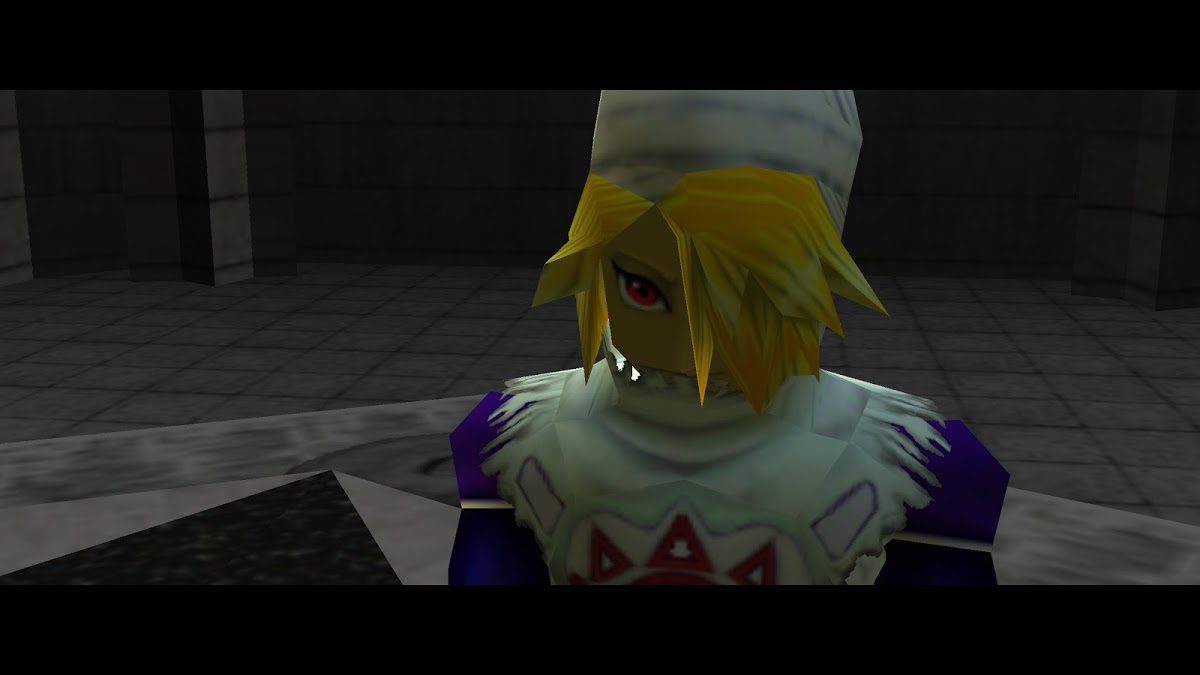 And even better than that she reveals a way for me to completely shut out the current world and retreat back to childhood nostalgia: 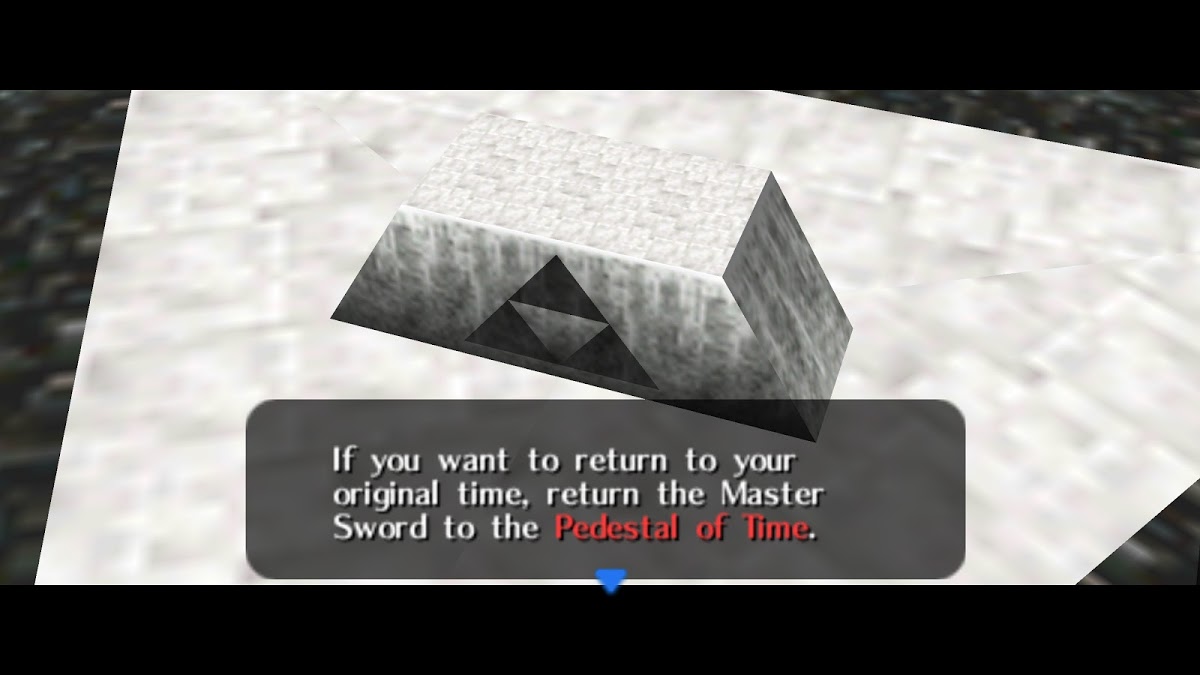 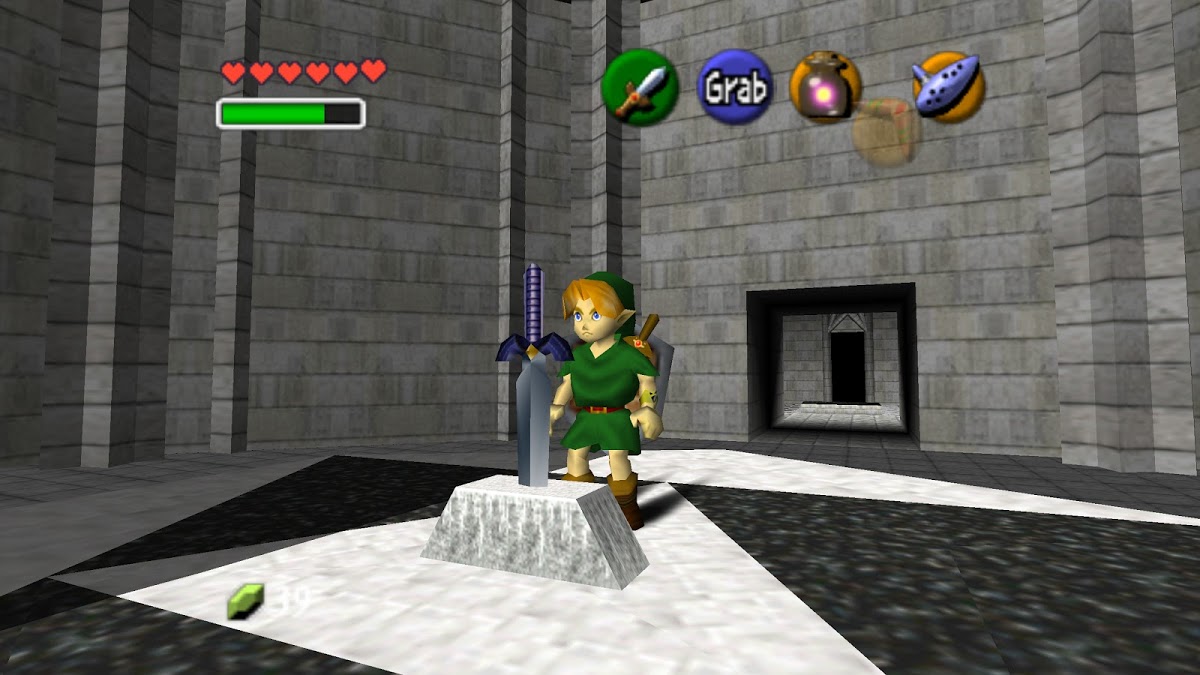 Aaahhh, much better. Look at that cute fella!

Ok, wind back a bit, Sheik also taught me a song to teleport back to the Temple of Time (a little late, there), and Link was once again amazed at the existence of an Ocarina. 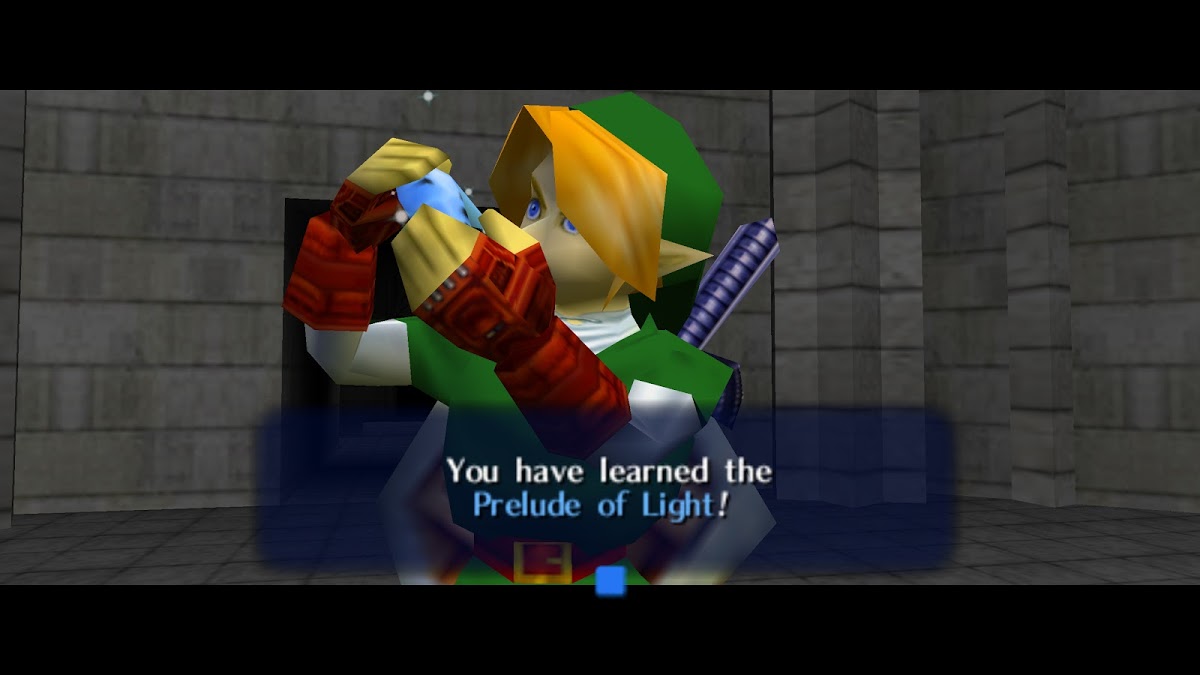 Buut, uuh, actually I have no idea what i should be doing as a child, so I warp back to the present (?) and decide that I might as well follow in my footsteps and go see how the Gorons are doing. I miss them!

On the way up the mountain, they've made an extra little obstacle course with Donkey-Kong-like barr--I mean boulders rolling down the path that are really easy to avoid and then I get back to the first stop in the city: 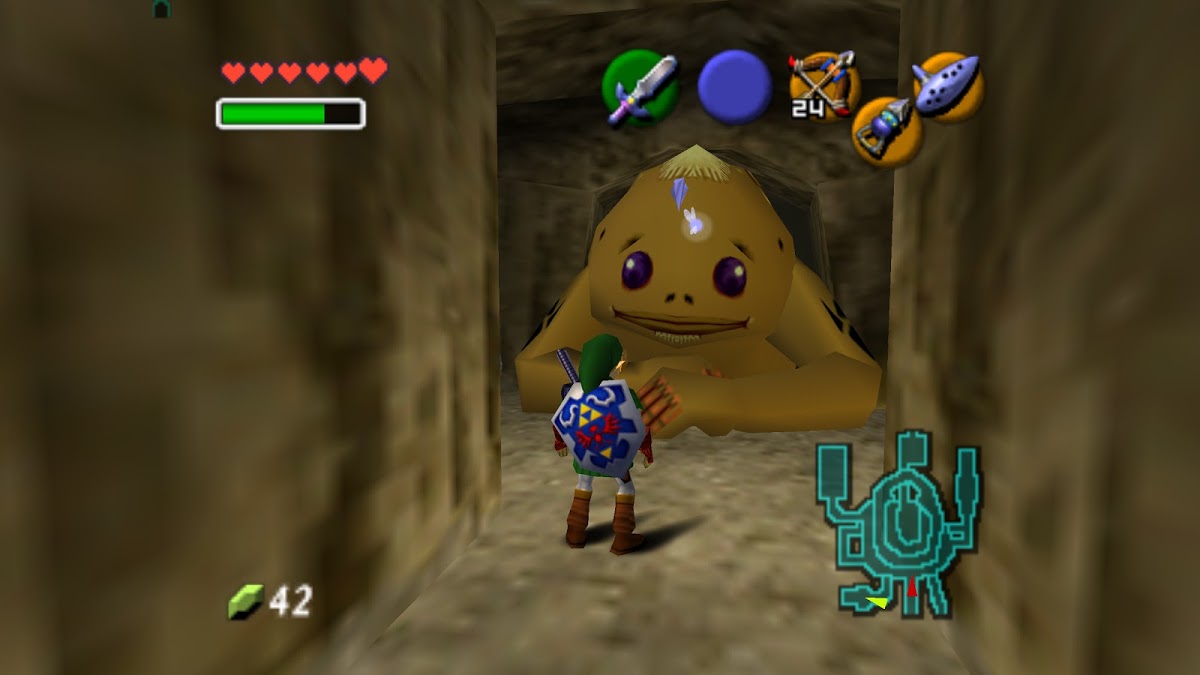 See, I weirdly remember that he had a thing he said would take years to complete. And guess what, it's been years since I saw him! 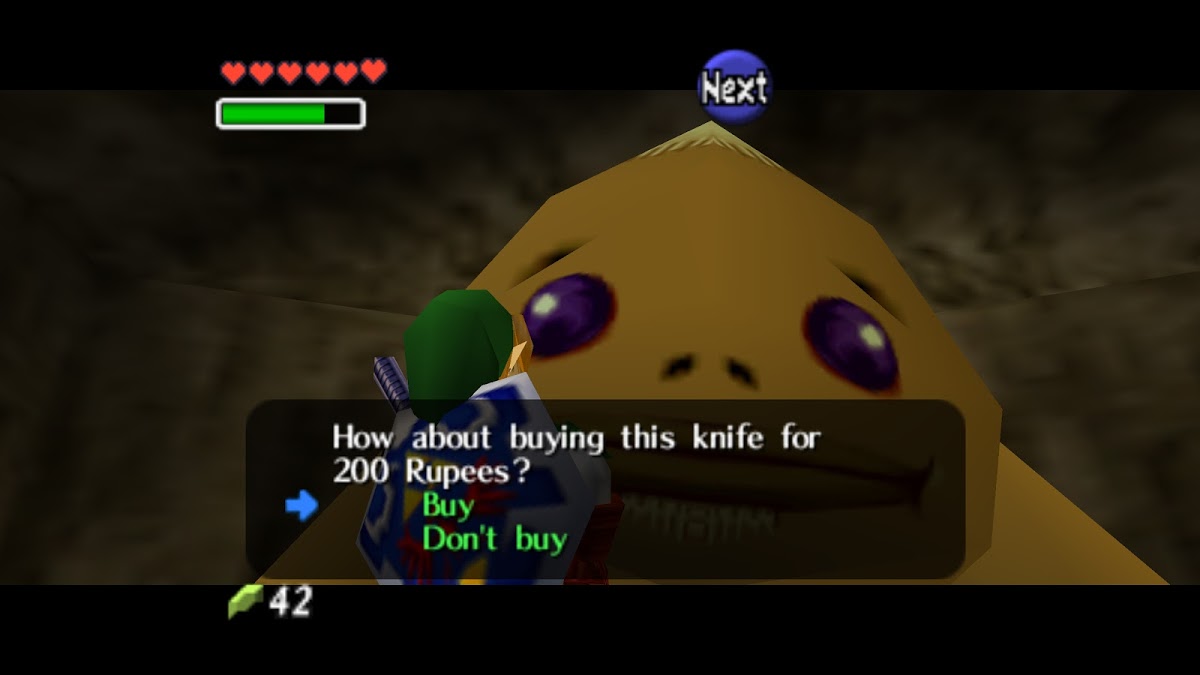 Oh. I ain't even got the ability to hold that much money, son! ...People don't trust me with money. It's a long story.

So I go back to the city and notice, it's also strangely... empty. I don't see a single Goron. And all the doors are closed and I can't even blow them up with bombs, and the big spinning urn in the middle is also gone.
Hmm..
It's just a ghost town.

And then Na'vi drops in with her usual quality questions: 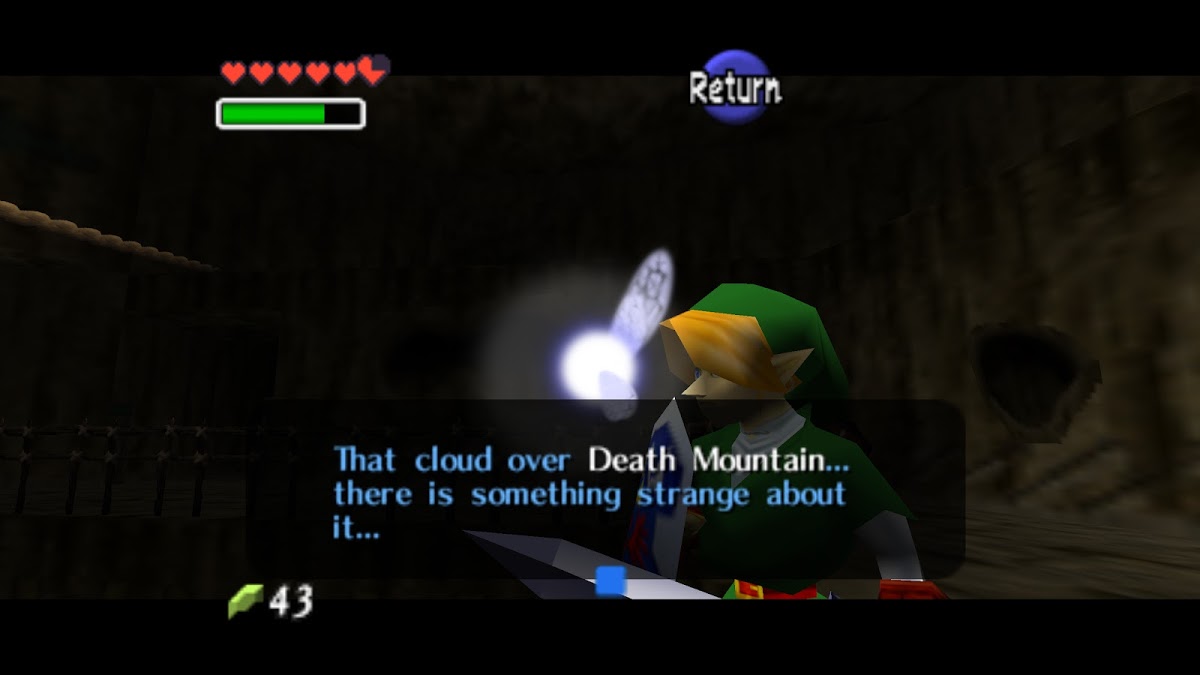 Oh, so you want me to go up to Death Mountain? Fiiinnnnee..

Next time! We saved a forest and learned something new about ourselves this time! I'd call that a successful episode.