(I play Ocarina of Time every Sunday and write what happens inaccurately. See previous parts here. (and now you can actually see all the parts! I fixed the bug!))

Last time, we traversed through much of the Water Temple, and got the "Longshot", so I can now finally shoot my way across this chasm: 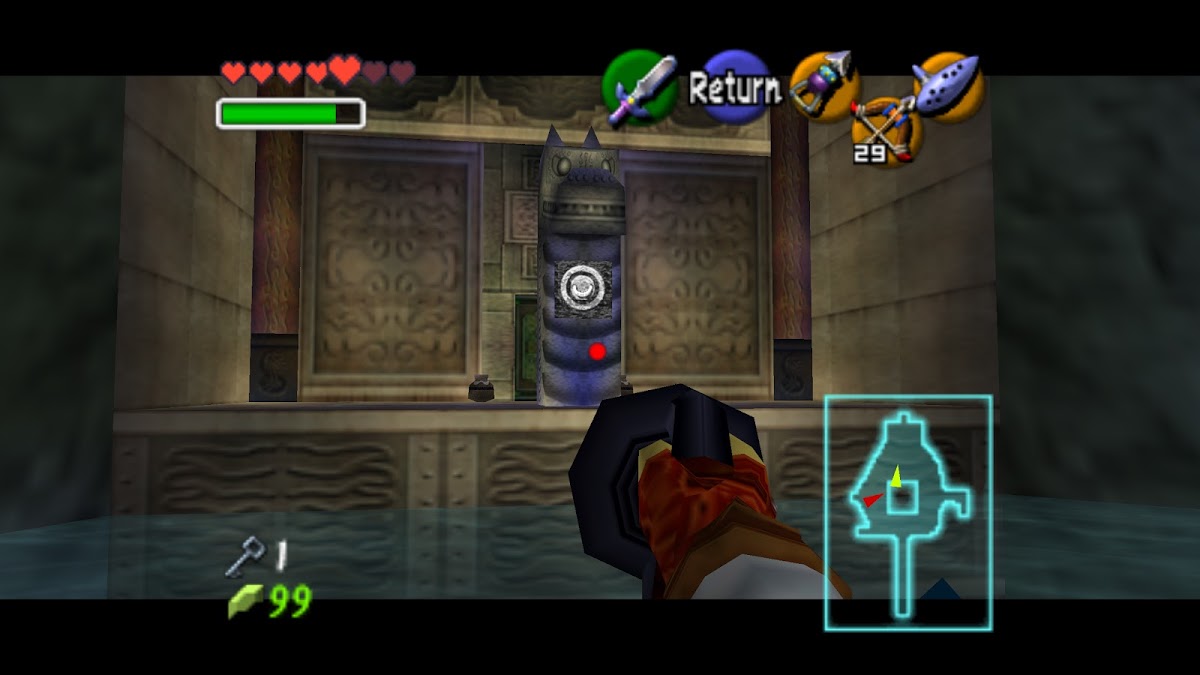 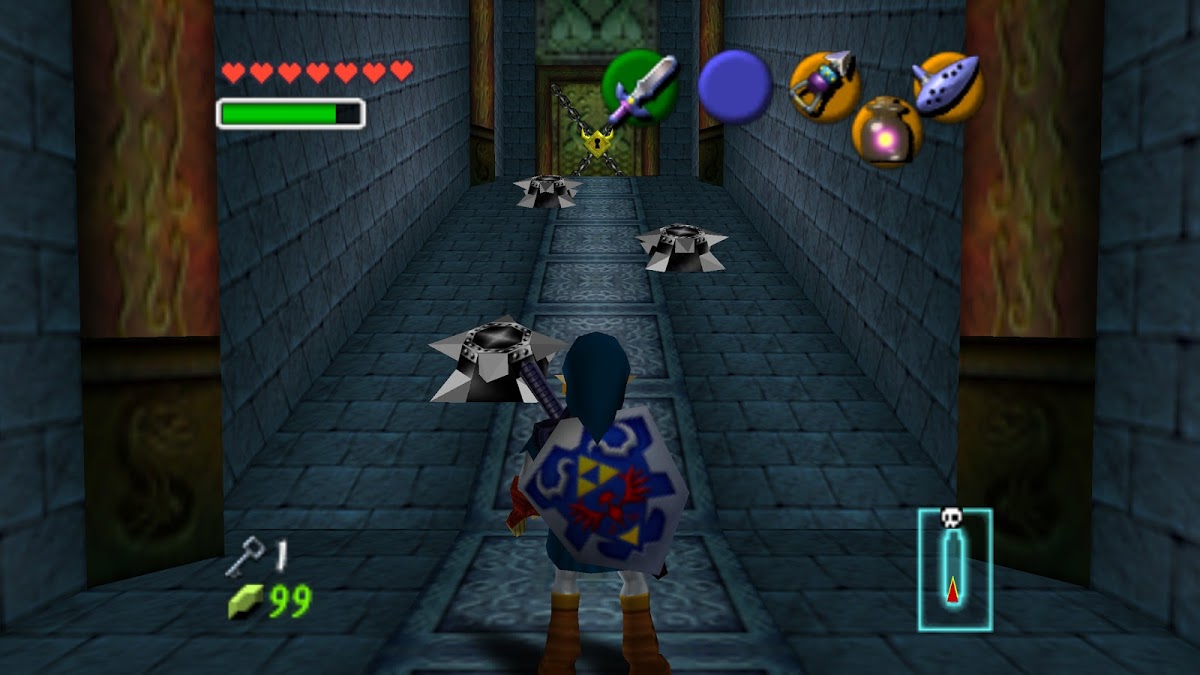 Oh, that's the boss door. Problem. I don't have the boss key. Sooo, let's go to the other spot I haven't been to yet!
On the map, I checked and found one area that was unexplored, so I wen there and got through a couple of rooms.
Like this one: 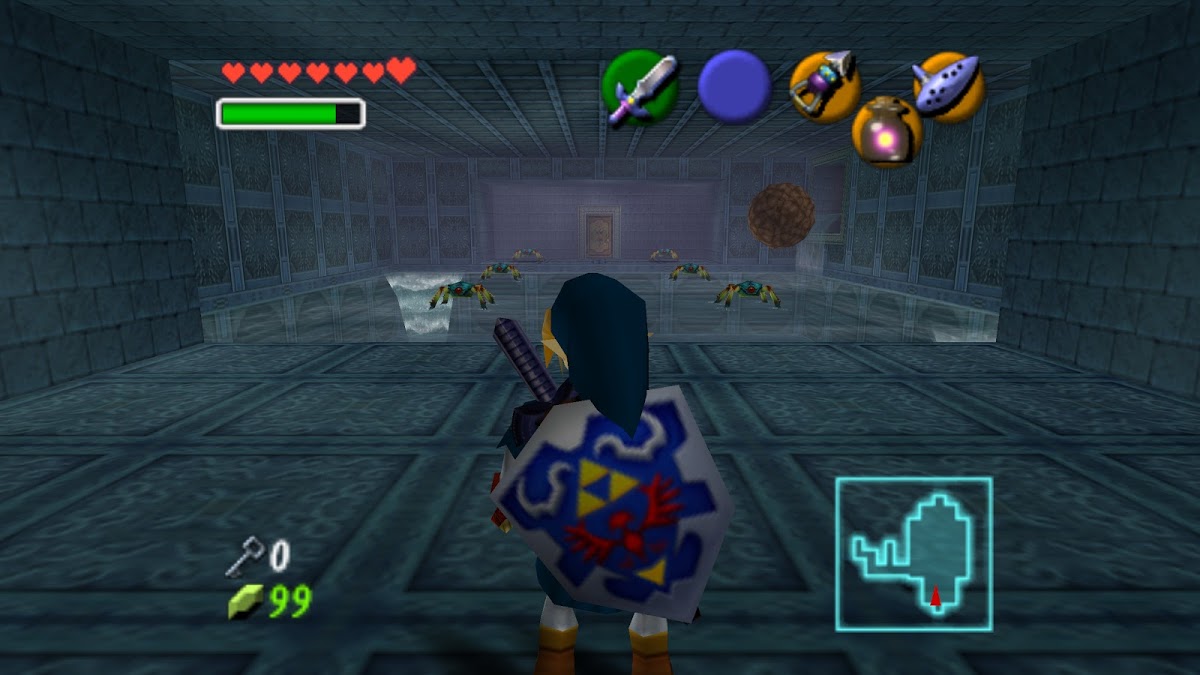 Which I did slowly at first because I wasn't sure I was just able to swim through all of the thingies unscathed, so I pulled them one at a time with my "longshot" and killed them safely on land. Except for the last two, where I said fuck it and swam behind them, closing the door like nobody's business.

And then there was a room with a switch below water and a hole in the wall I could blow to get to a hallway with a box. However, I could only pull the box so far and that didn't help me get it out of the hallway, and it wasn't until I check the guide I found out that you could also blow the OTHER side of the hallway to get into the backentrance... Which wasn't obvious at all. Right. Okay.

So box on the switch made the water level in that room rise and I got up a staircase, through a hallway and... 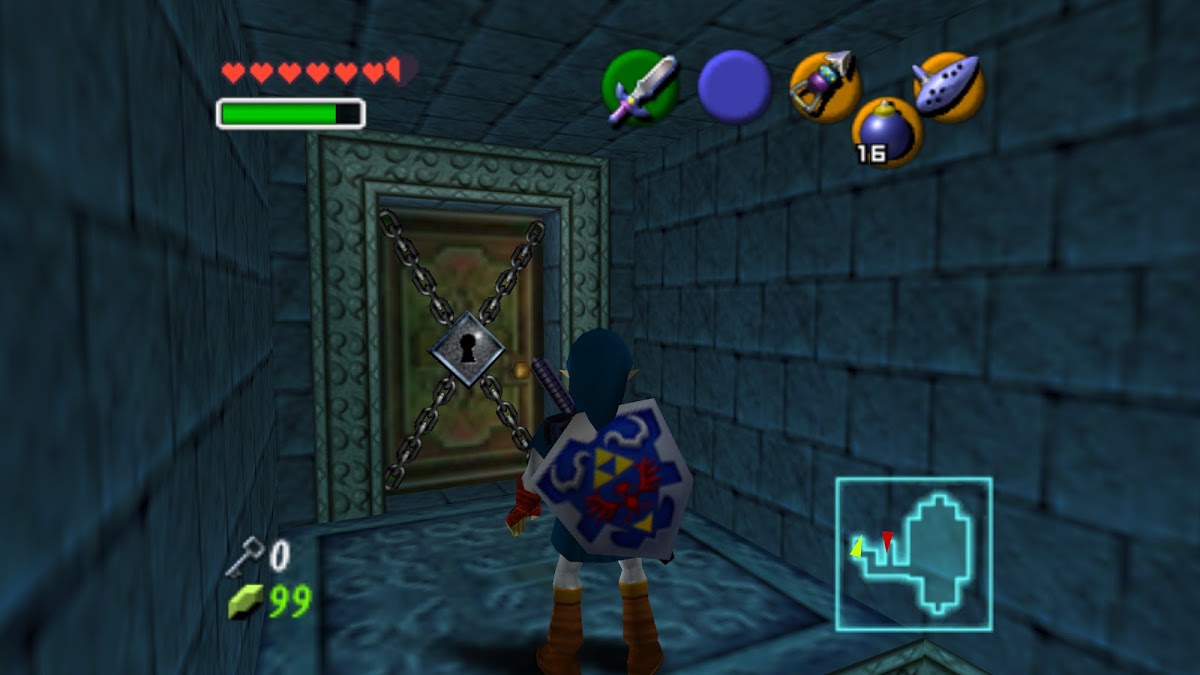 A locked door. I didn't have any more small keys.
Well, actual crap. 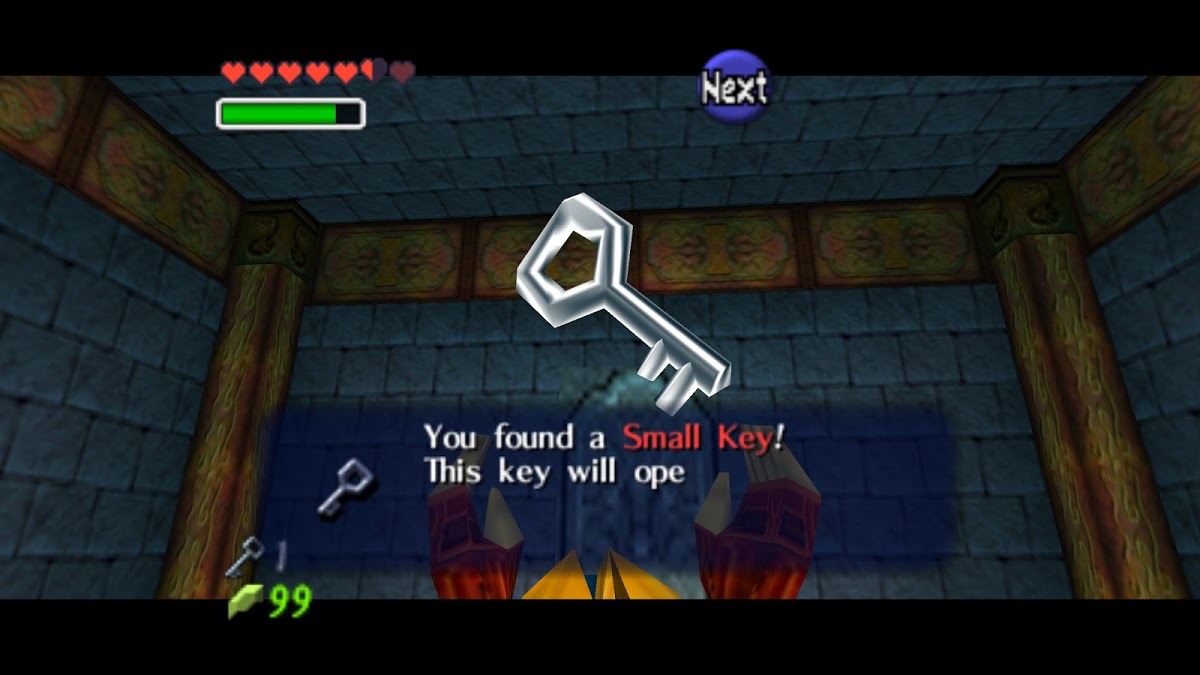 Ding!
(the power of editing!) 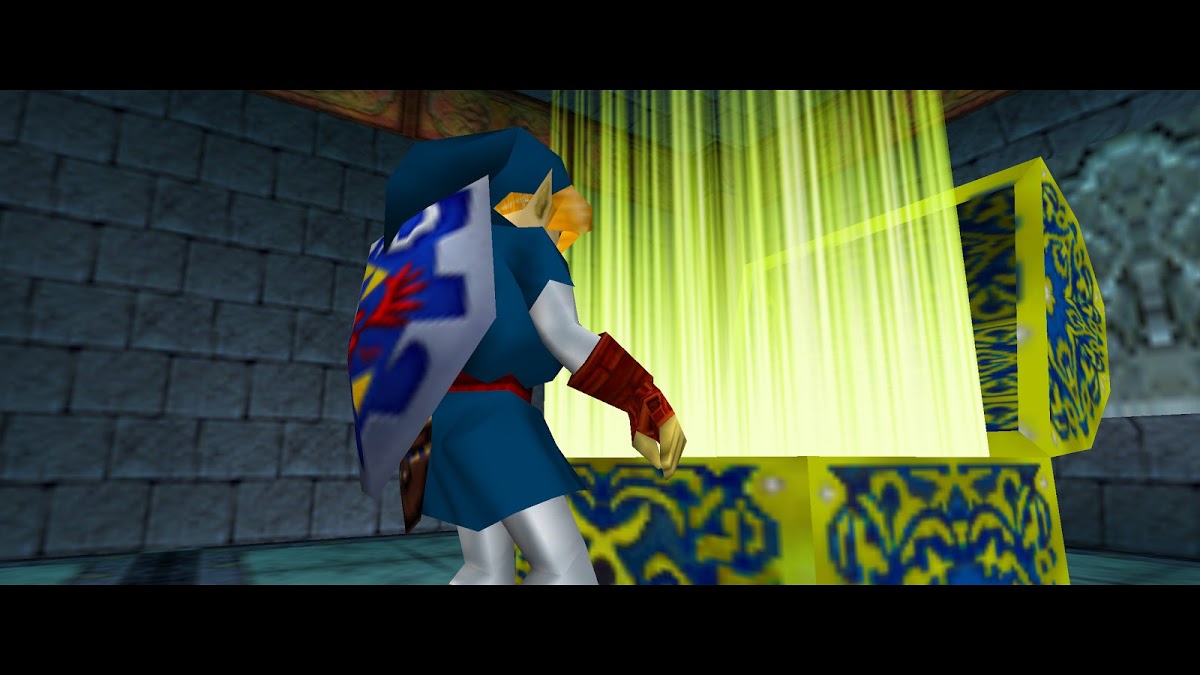 And then back to the boss room! (Btw. I'm not going to guess what monster it is as I have been spoiled on this specific boss. But you're free to do so!)

Except, let's take another look at this hallway. Those spiky things? they move, slowly across. And it's a slope, which means Link moves slower than he does underwater (!) And get hit once, and he decides it's better to slide down and start over.

I had full health when I started this. 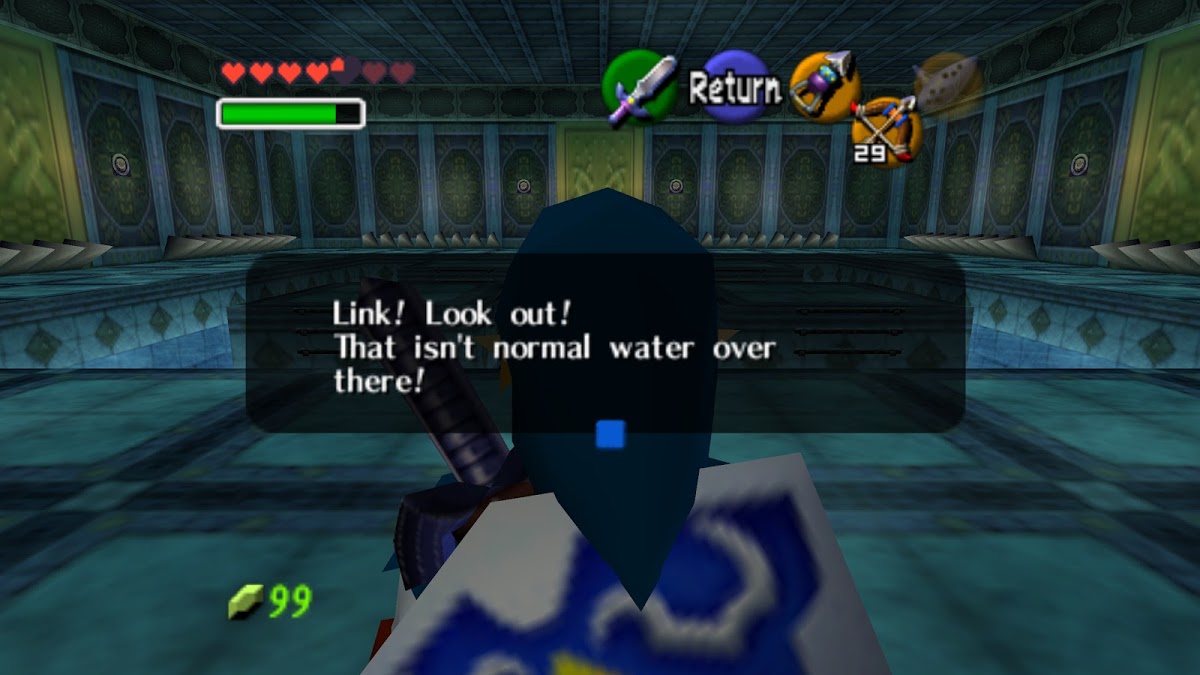 That's how much health I had when I did it.

But then, finally, it was boss time. Let's get outta this miserable place.
Whattayamean this ain't normal water? Also, who's speaking? Na'vi only speaks when asked. And it isn't green. And where's "over there"? The water is right in front of me.

Sooo, I jump out the platforms, and cutscene time: 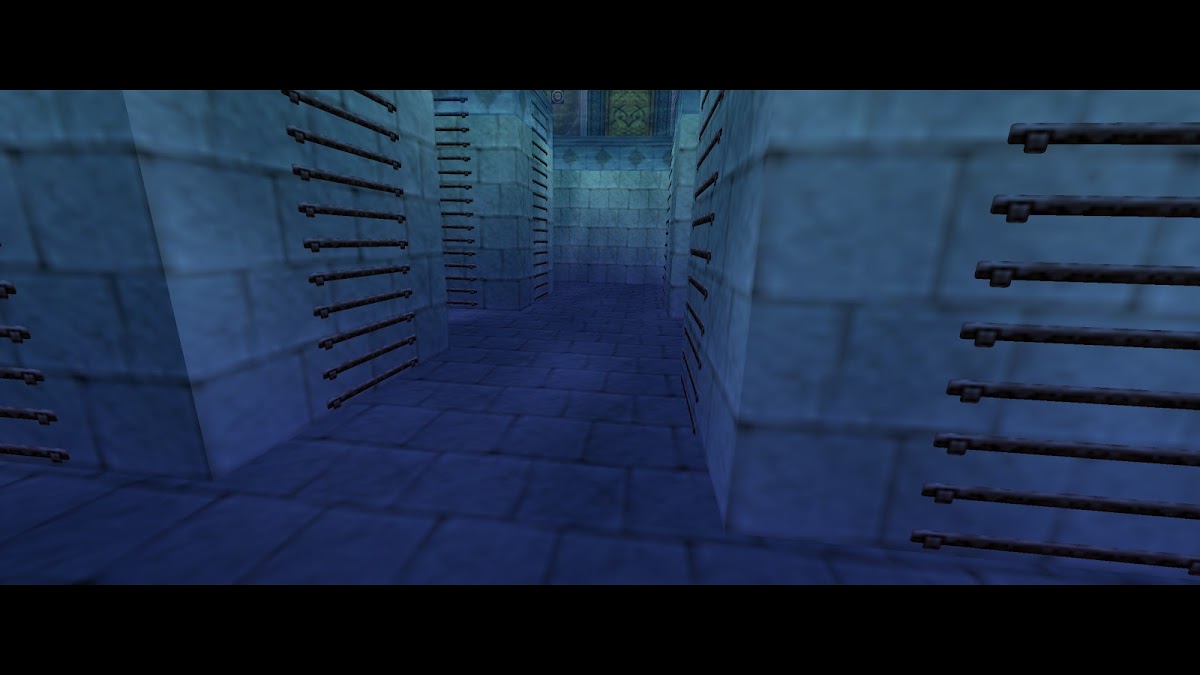 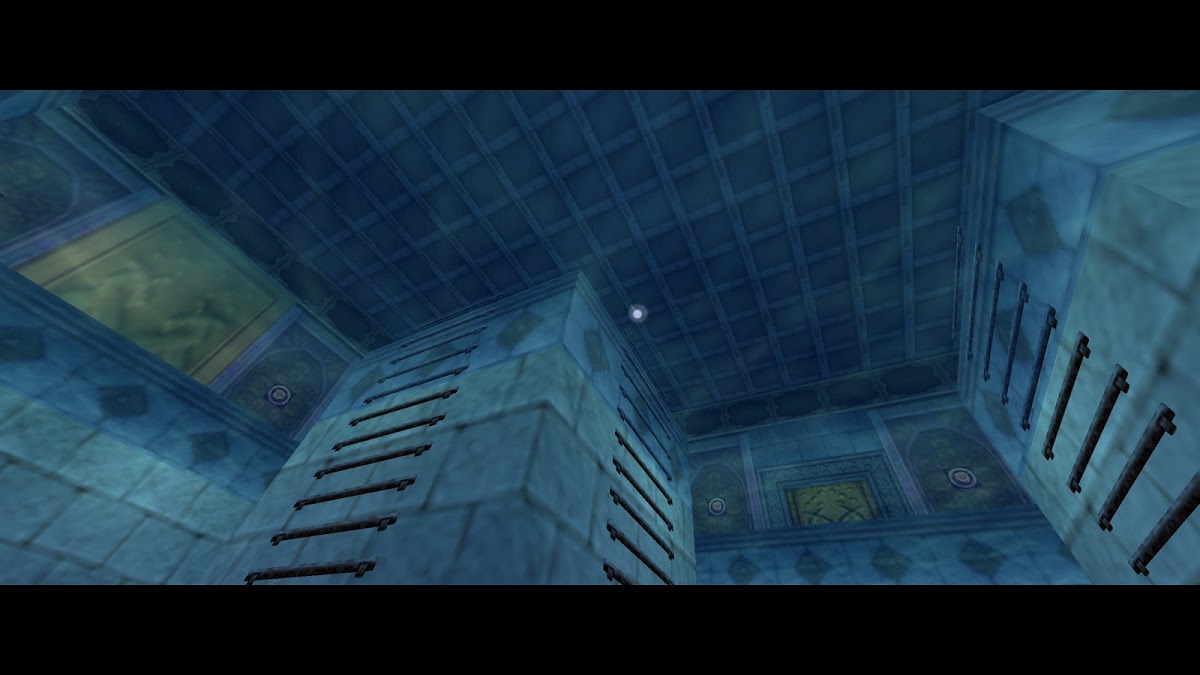 Image this with the Jaws theme. Only less intense. And not as scary. And with Link.
(oh, I've ruined it, haven't I?) 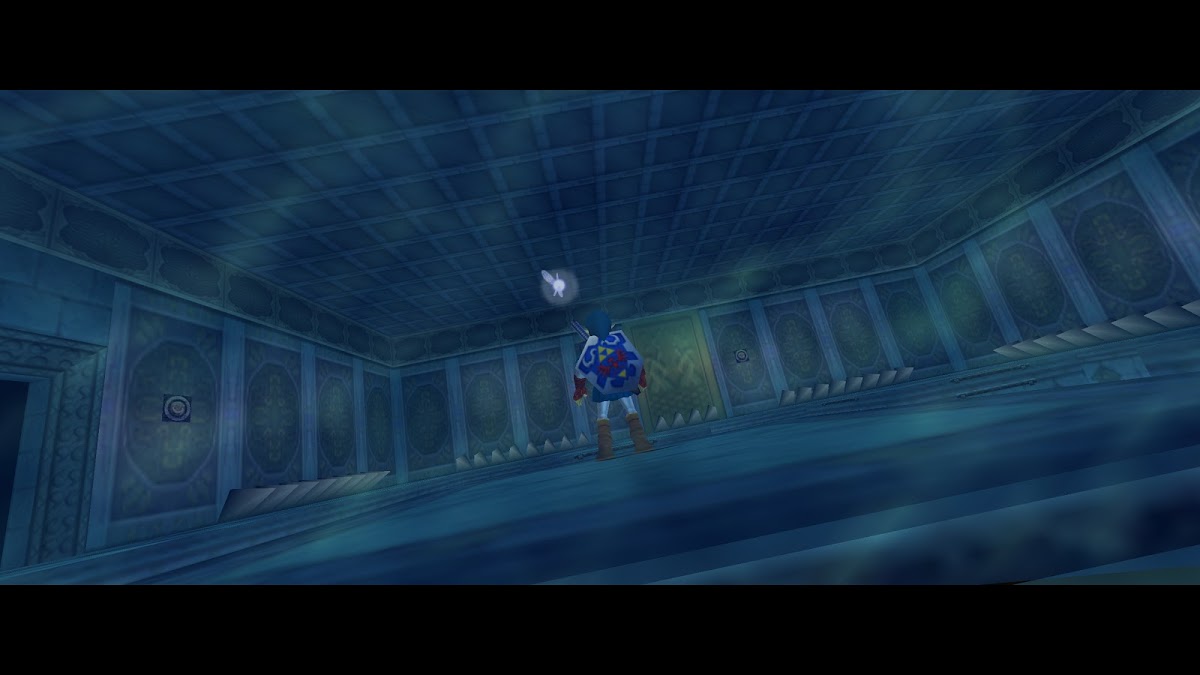 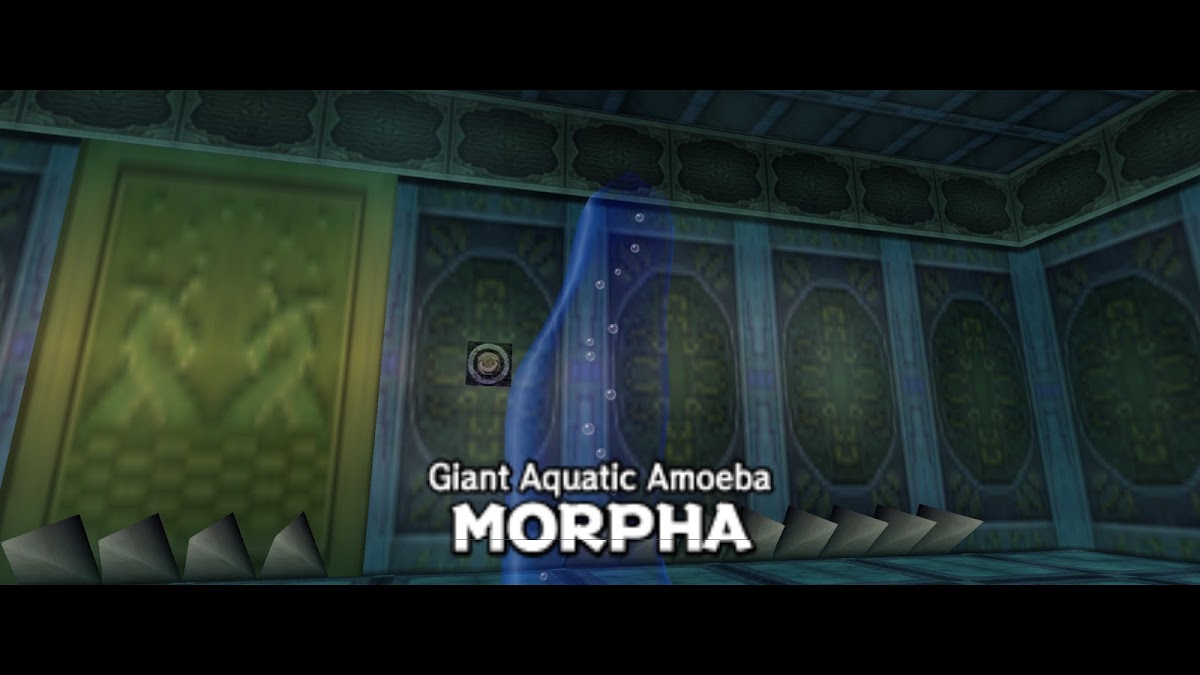 An amoeba? A giant, aquatic one, sure, but still. Just an amoeba. And it's called "Morpha". Well, ain't that cute!

Look at that th-- 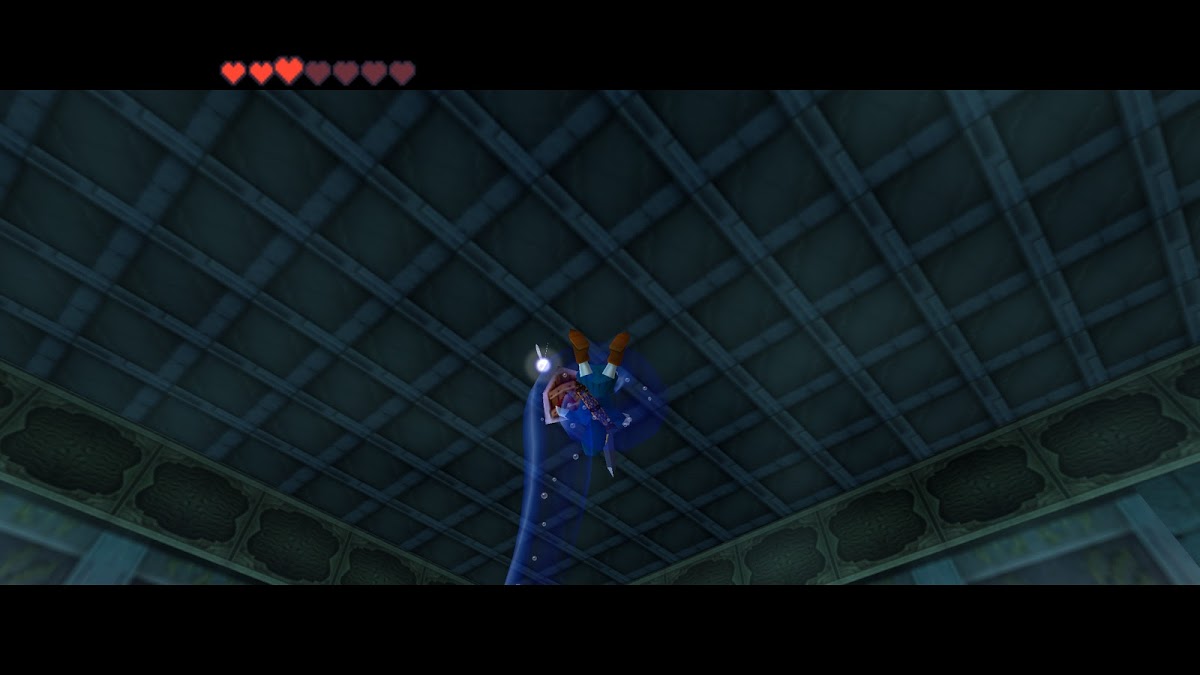 Oh god oh god oh god put me down this instant! Grawp!
Put
Me
Down!
(That thing does a lot of damage)

And it doesn't listen to Hermione. Unfortunately. So I have to fight it! No alternative there.

But no, actually, the amoeba is this thing: 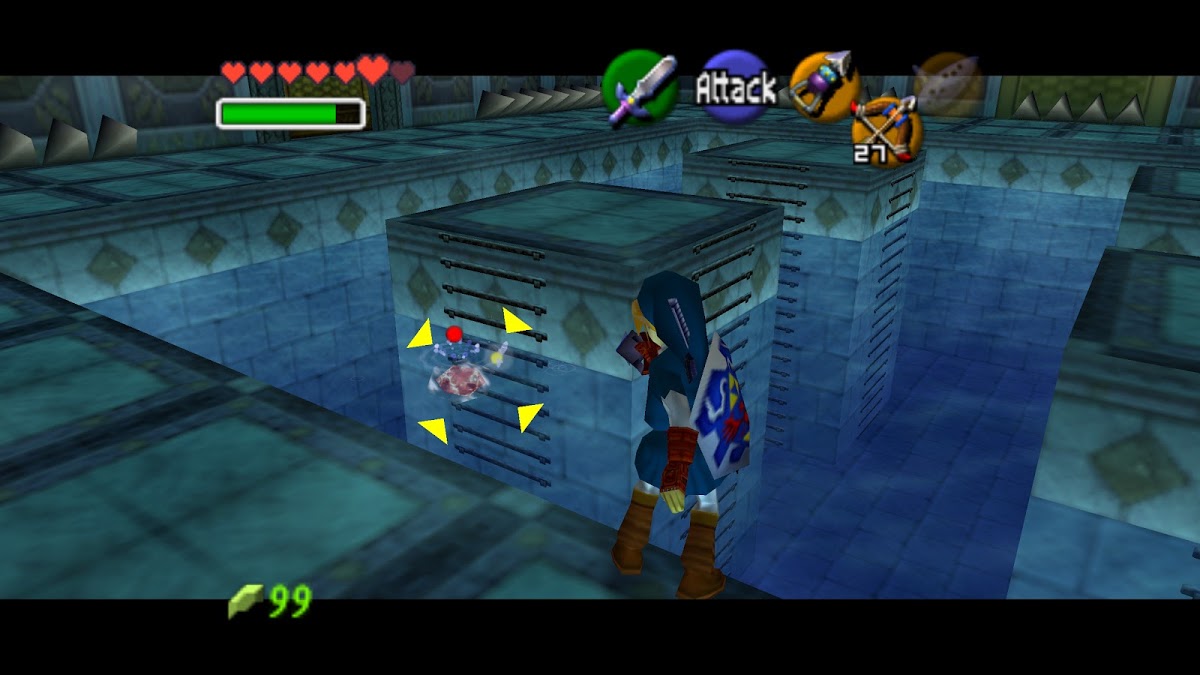 The red little blob that looks like Papa Big Belly Fish spit it out. It jumps around in the water and makes these watery tentacles come up that will grab me and be unkind. The solution? Stand a little away from them. They don't move once they're up. And they take a long time to get up. Soo, that's fine and all...

but how do I damage it?

I was thinking I should "longshot" it out (That's my name Link "Longshot" Linkerson), while it was inside the tentacle, but I fire the longshot a bunch of times and it doesn't connect at all. So I begin to try other things.

I tried whacking it with a sword, but then the water would just grab me again. I tried a bomb, I played Ze---
no I didn't do that. Instead 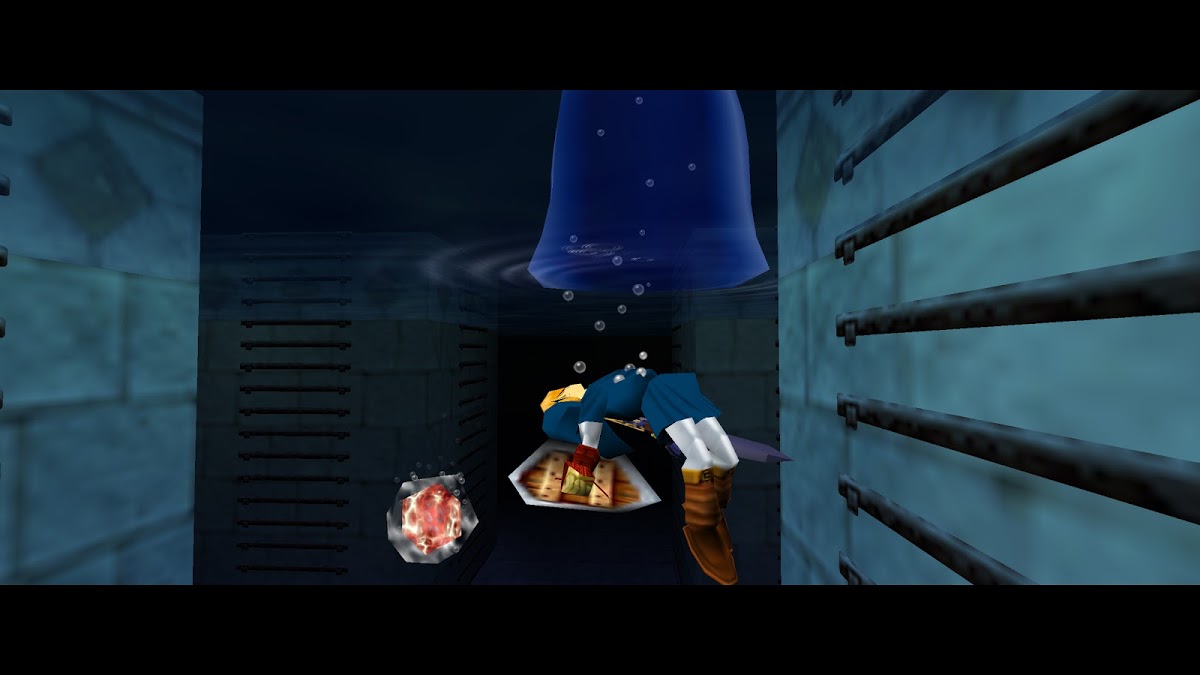 
Soooooo I really didn't want to waste more time here. So I checked, and sure enough, the answer was to: Longshot it while it is inside the tentacle!

I just missed! And was bad!
(Really, it feels super inconsistent when it works and when it doesn't.)

And then you hookshot it and hit it once with your sword and it jumps down again.
And you have to wait until it does its little dance. And hope you hit it. Because if you don't , you have to wait again. 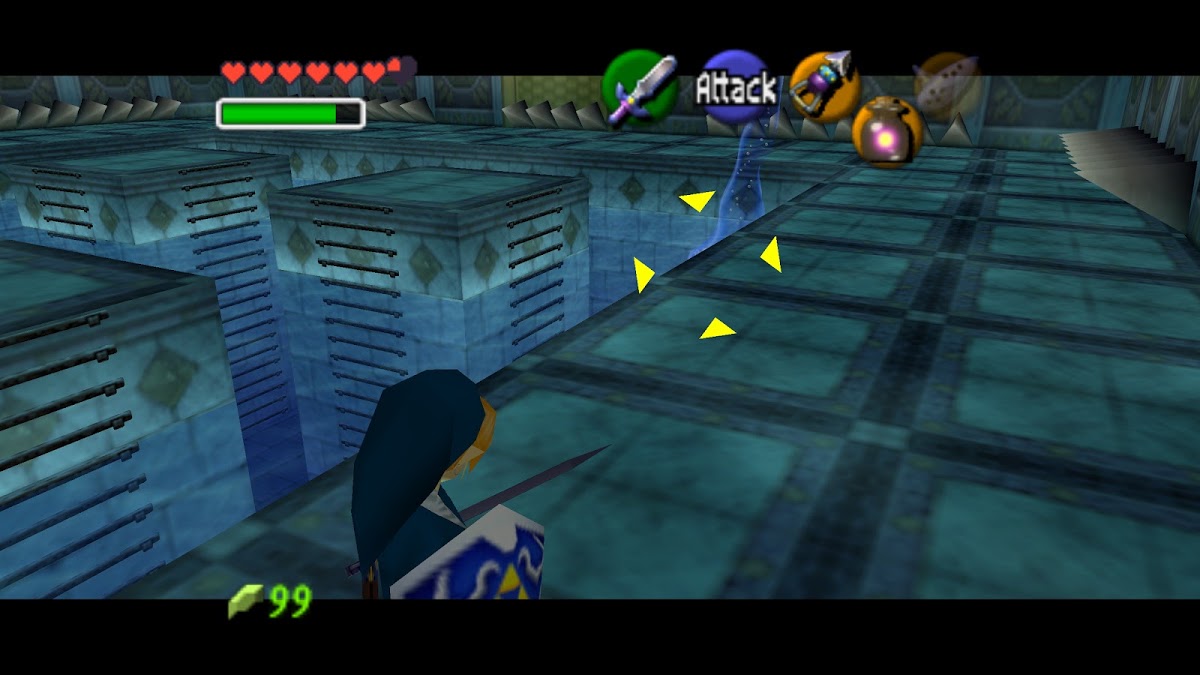 You spend a lot of time in this encounter looking at it like this, just in the water. Maybe coming out. Maybe not. You're not in any danger as long as you're two tiles away from it.
Eventually, another tentacle spawns, but that's just as slow and predictable as the first one, so that's not really a problem.
It's just a long fight. It just takes a while.

The only health I lost that second time was from accidentally walking into the spikes.
And sure, I had read a guide. But only briefly. And to confirm that I had been doing the right thing already. 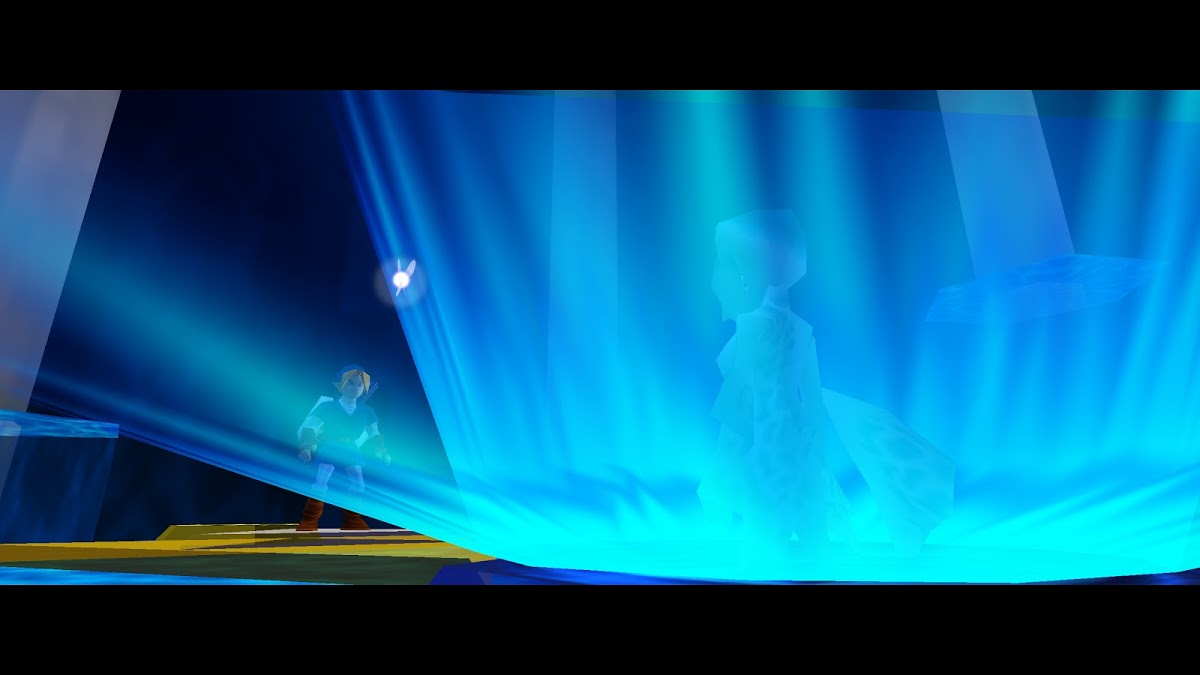 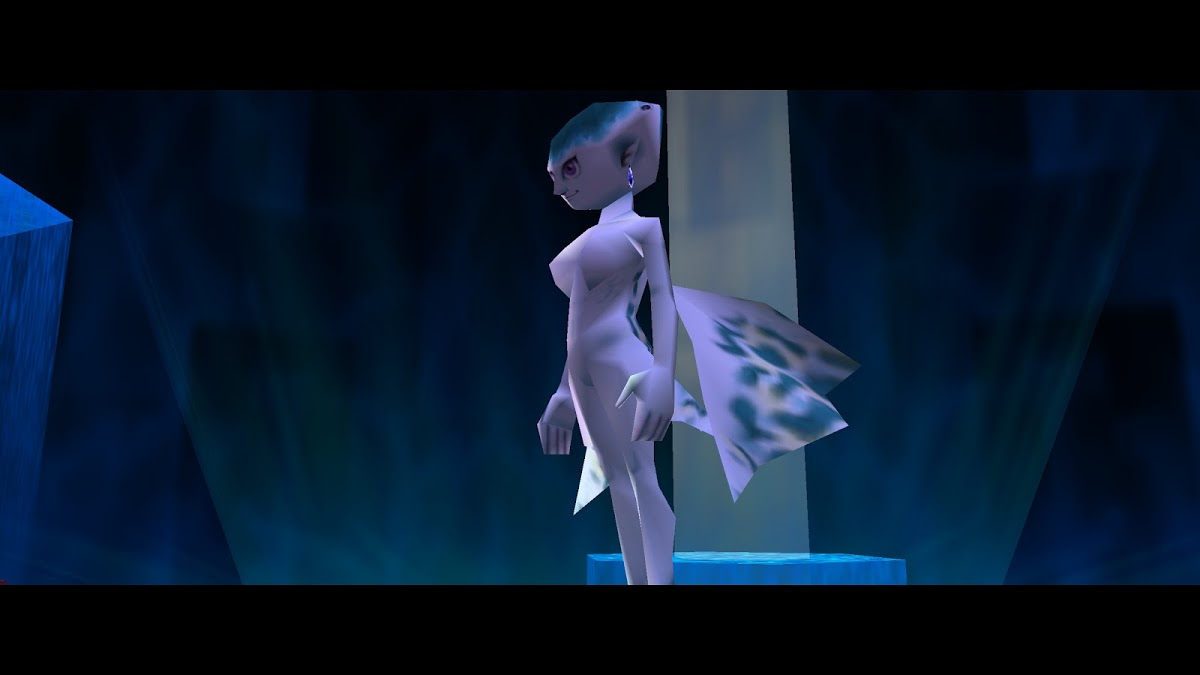 Surprising no one.
And she's got the usual spiel about how I have been chosen as her husband until she shifts gear. She says her gift to me is her eternal love but then she says immediately after: 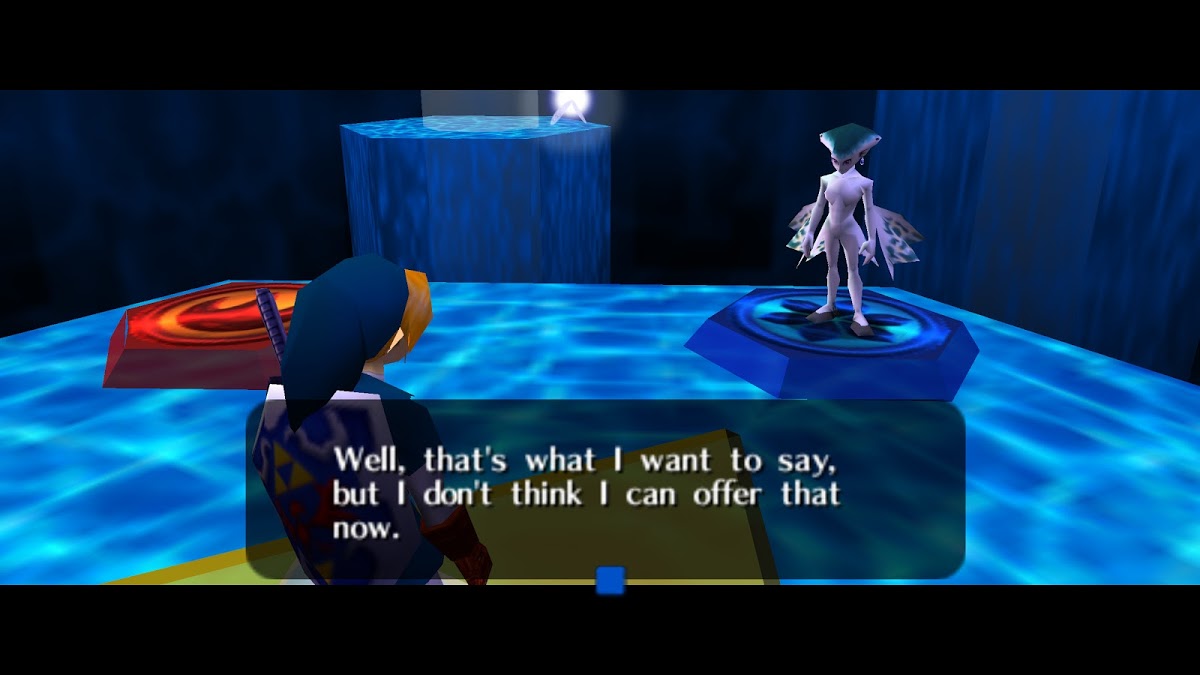 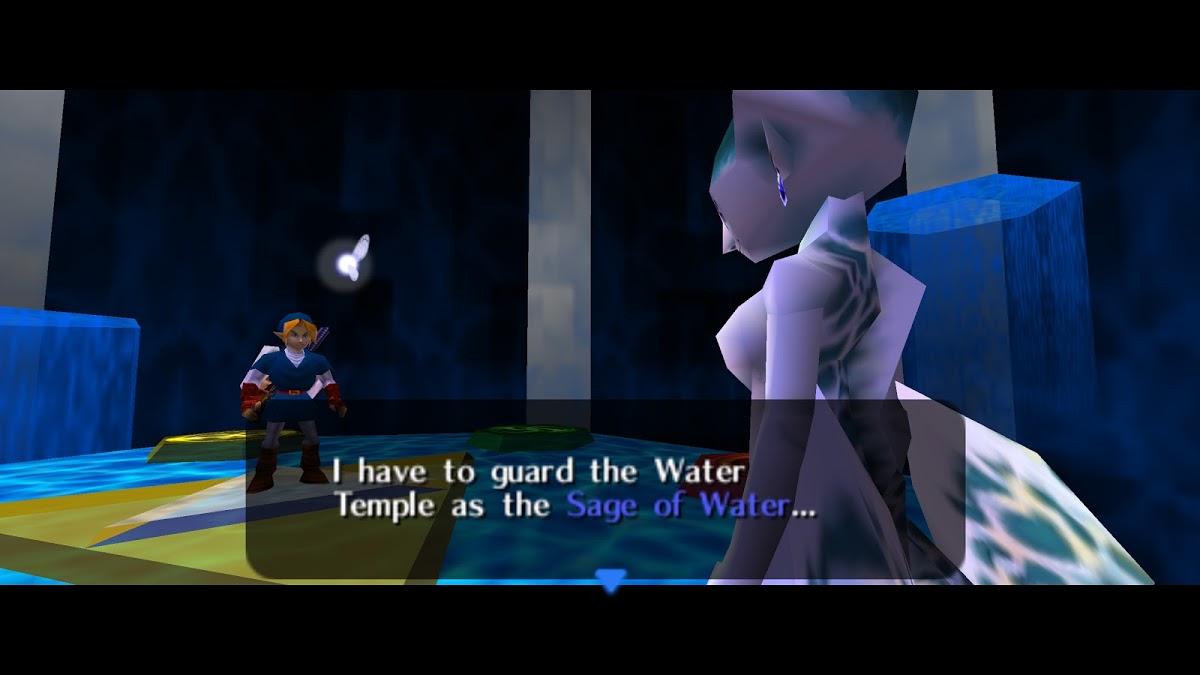 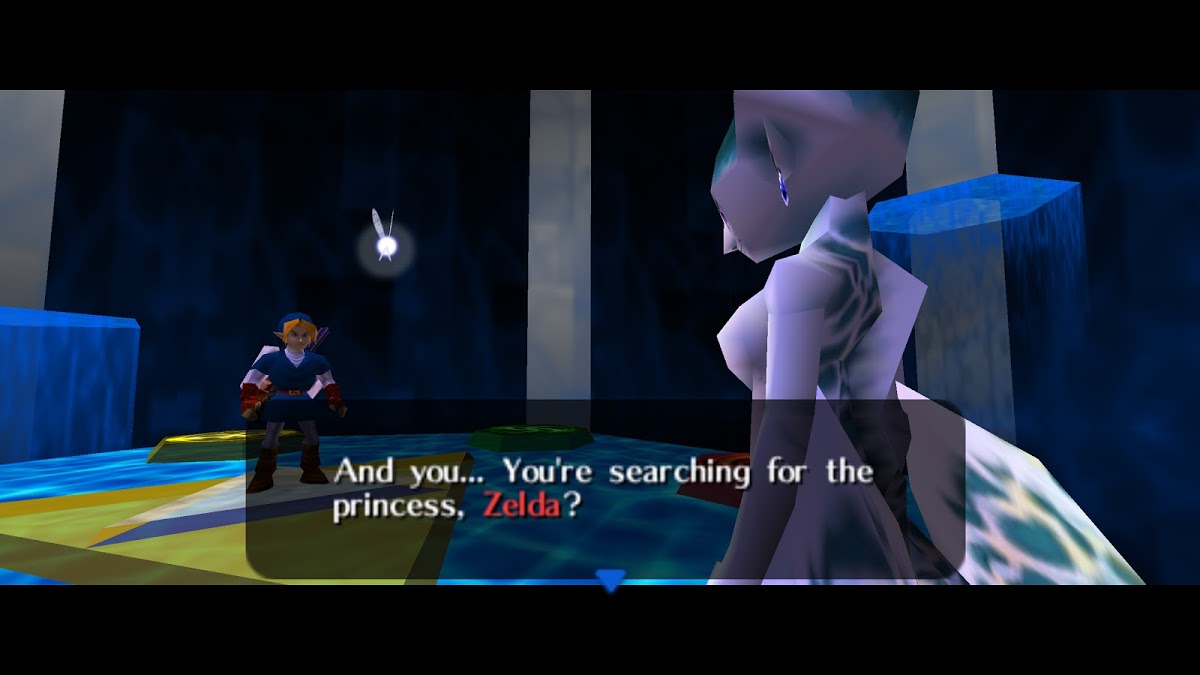 And then she's just all... cool with it? Like, ok, whatever. You make no sense.

And it ends on this: 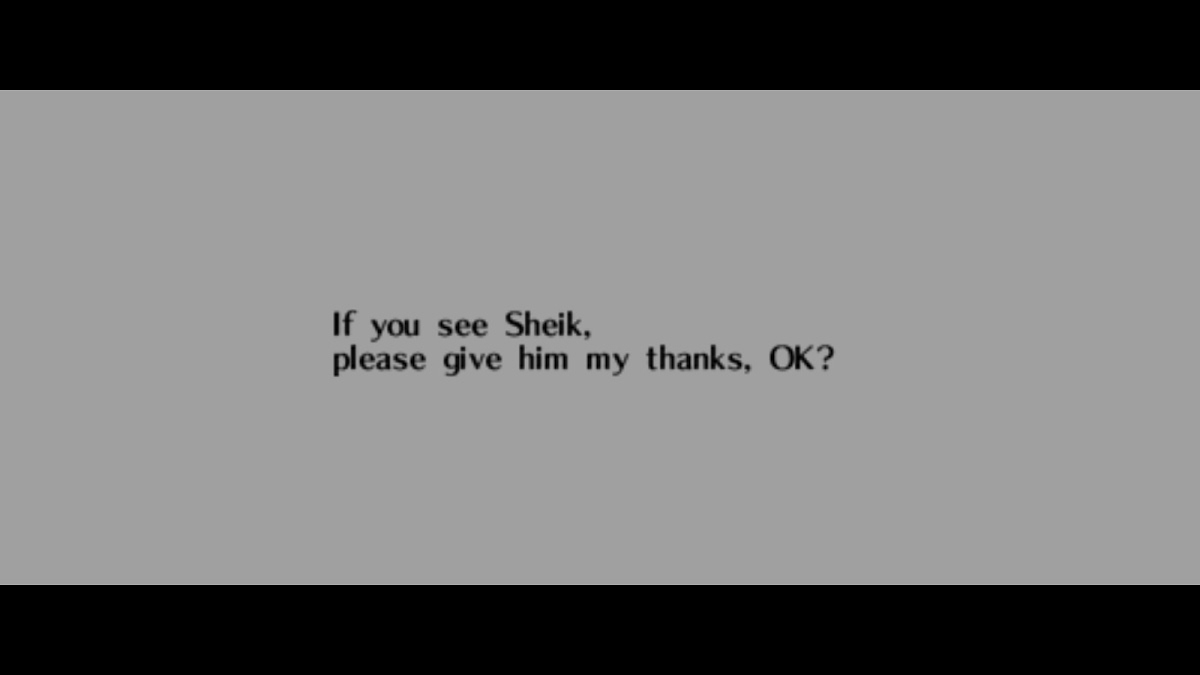 Why would Ruto thank Sheik? Why does she know who Sheik is? There's some backstory there we just don't get. And... that's her parting words? Really? What the hell.
Again. This game did not treat Ruto well at all. 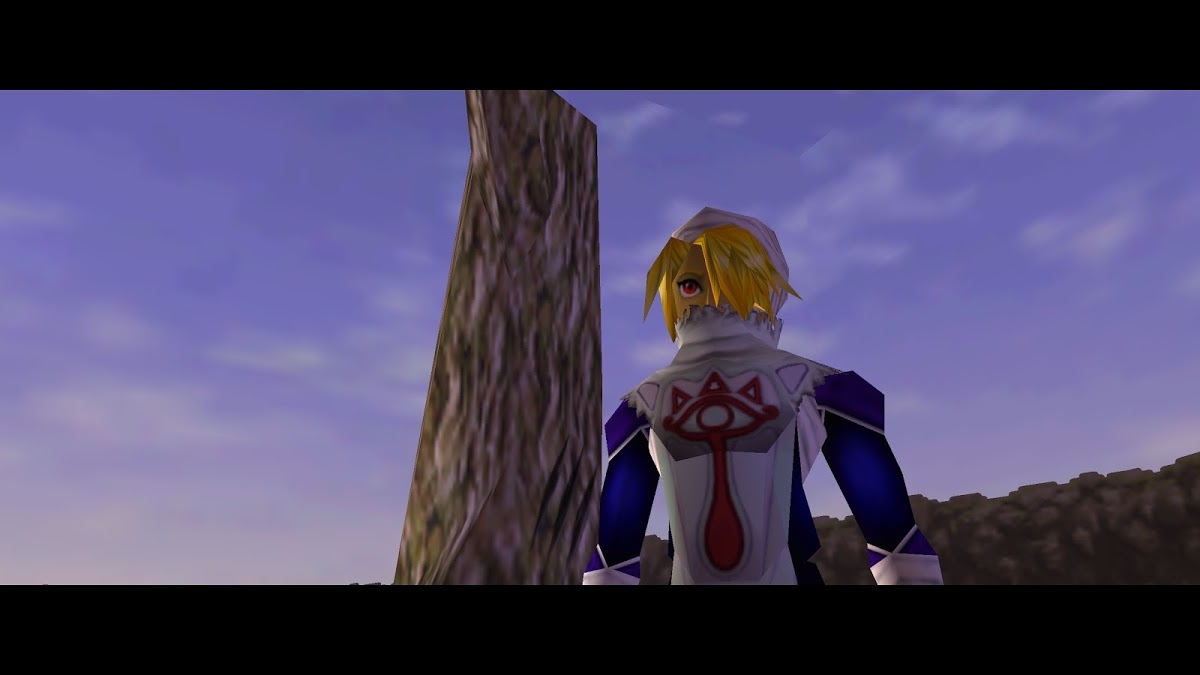 Hello there. We was just looking for you. 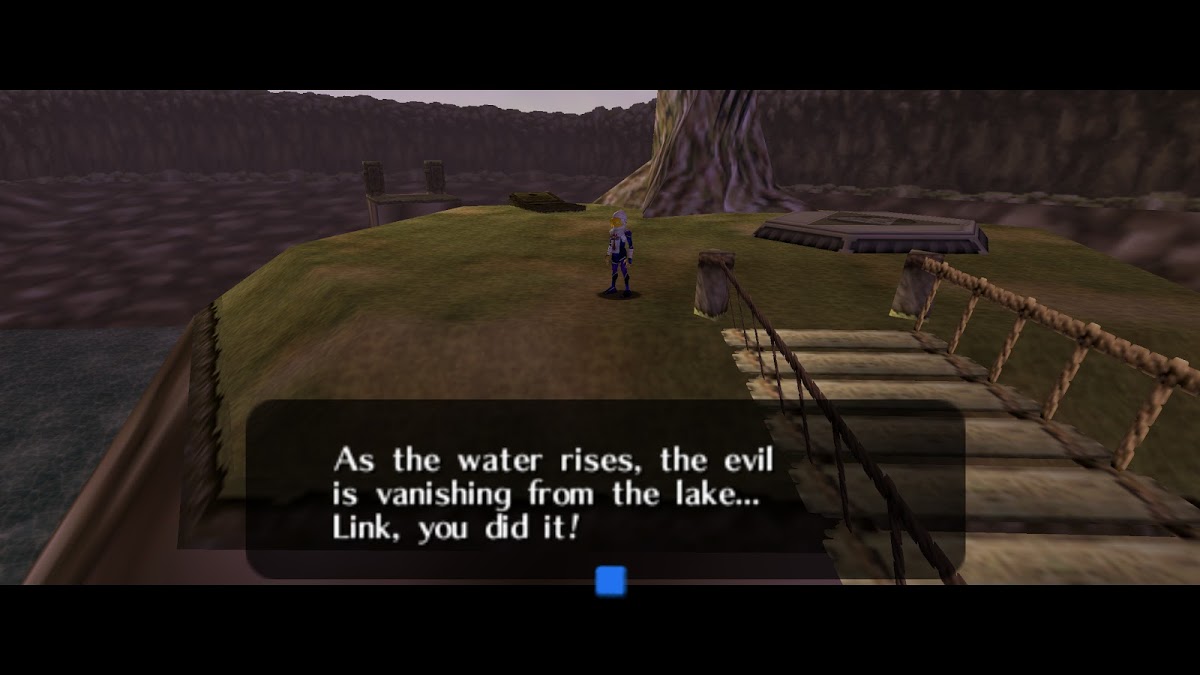 A rare moment of optimism for Sheik. 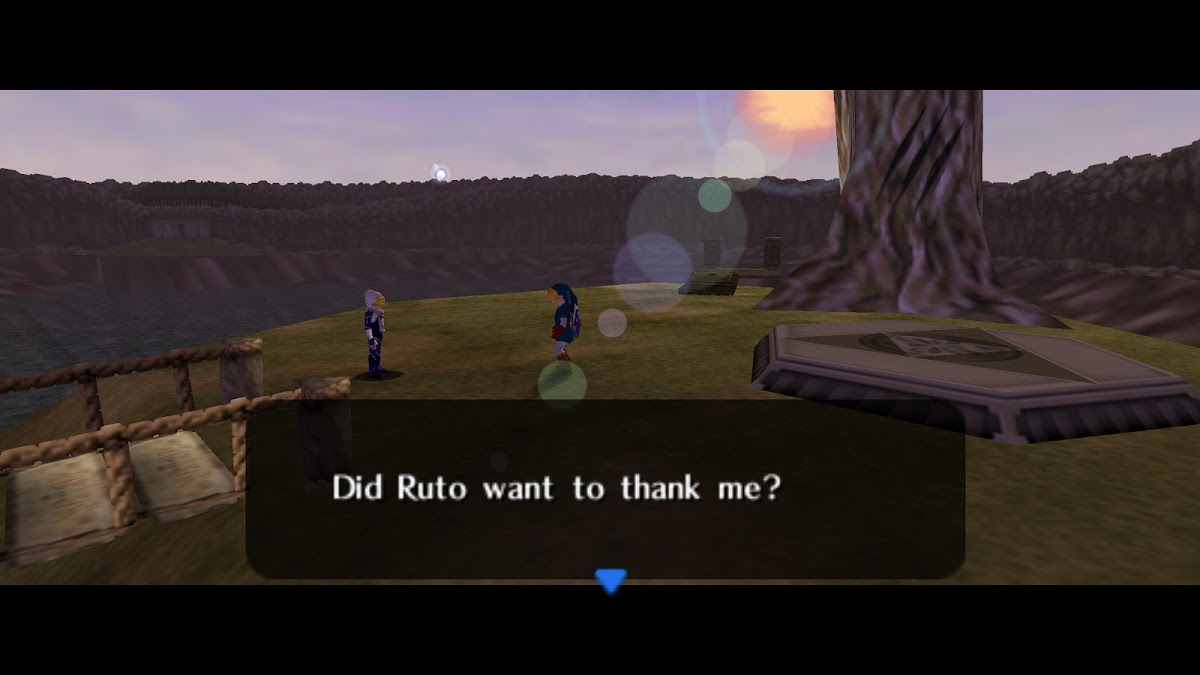 Sheik is as surprised as I am. 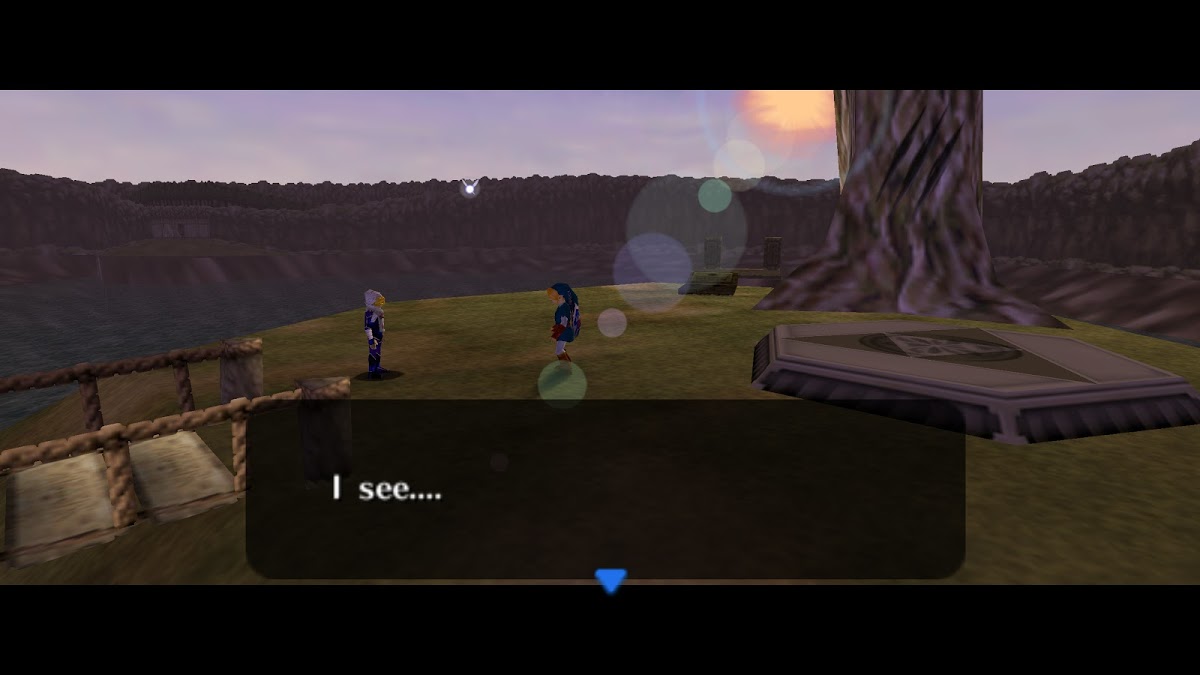 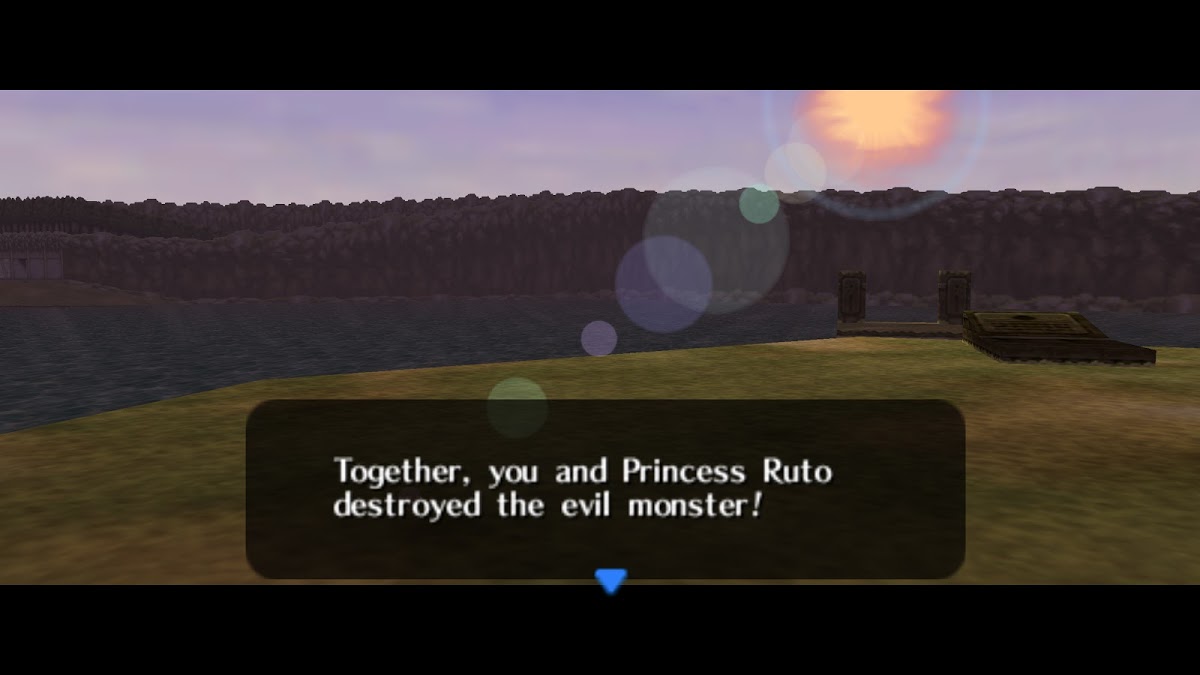 Well, I guess she helped? Uhm... I don't know that she did? I looked at the guide a lot? Is that the same thing? Is the guide Princess Ruto?

And then Sheik vanishes and we get this cool cinematic angle: 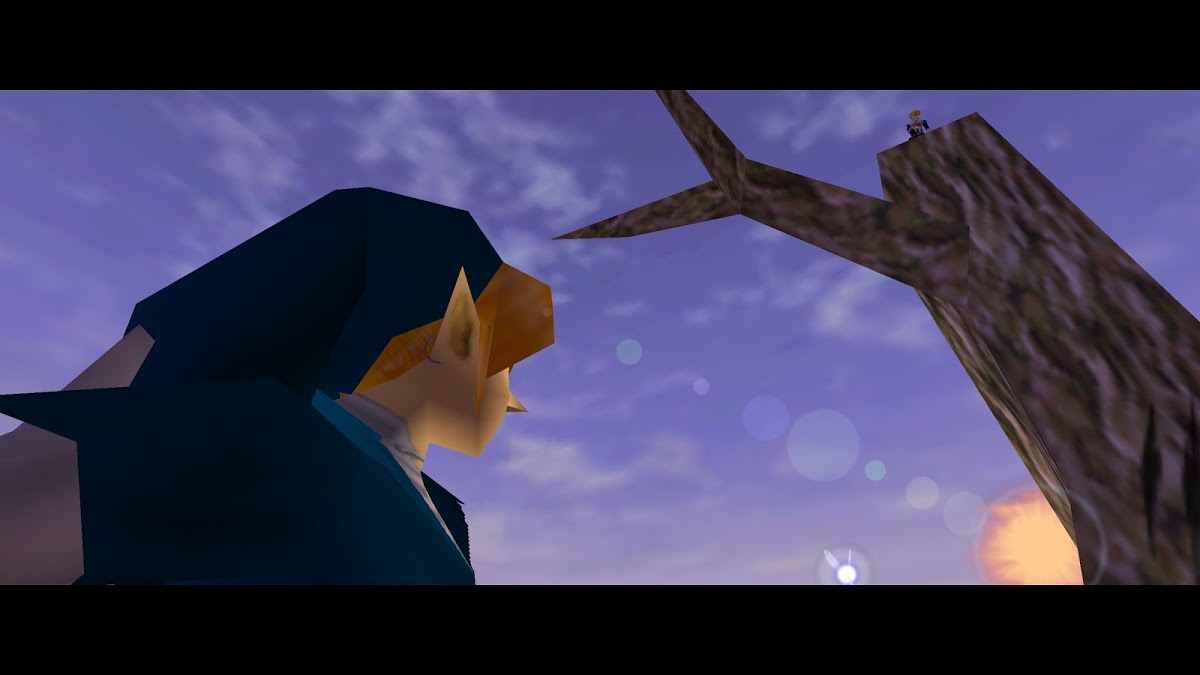 (Sheik's up on the tree if you can't find her)

And then it dumps me into the open world, without any direction.
And as I alluded to before I entered this temple, I have no idea where to go now. Because I've now completed the footsteps of the younger me and done the three regions in the same order. So now I'm going to become even older Link and do it again?? :O

But wait, there was this plaque. On the island. 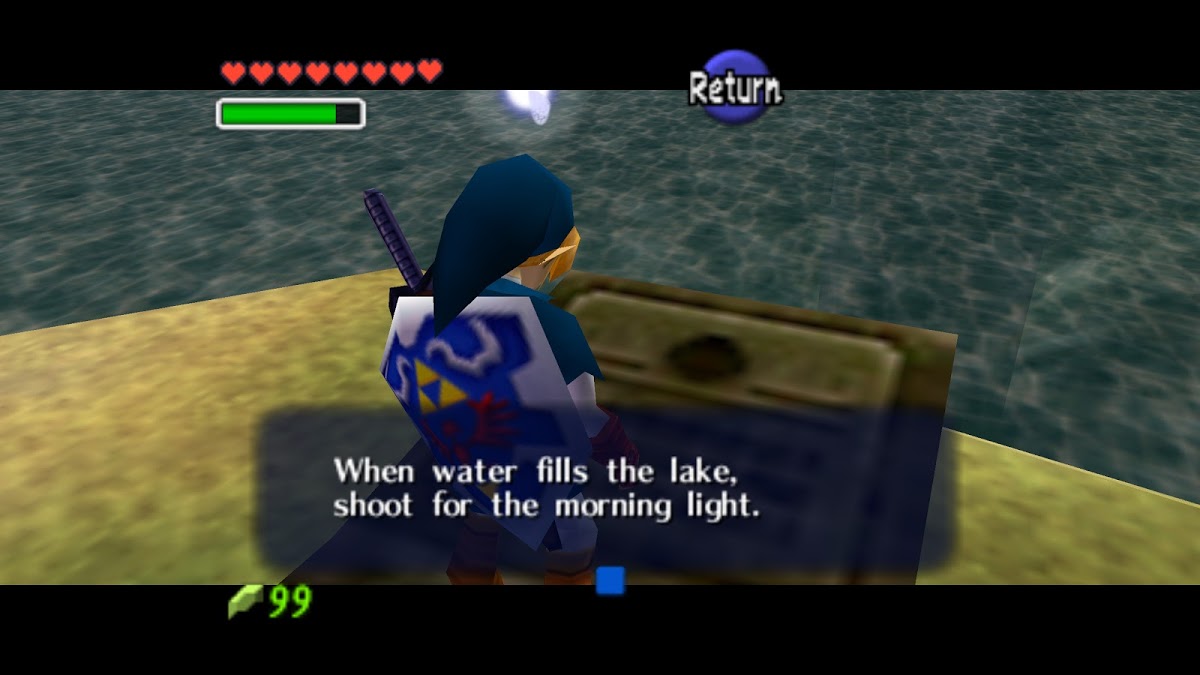 Ahhh, that's now they're talking about! 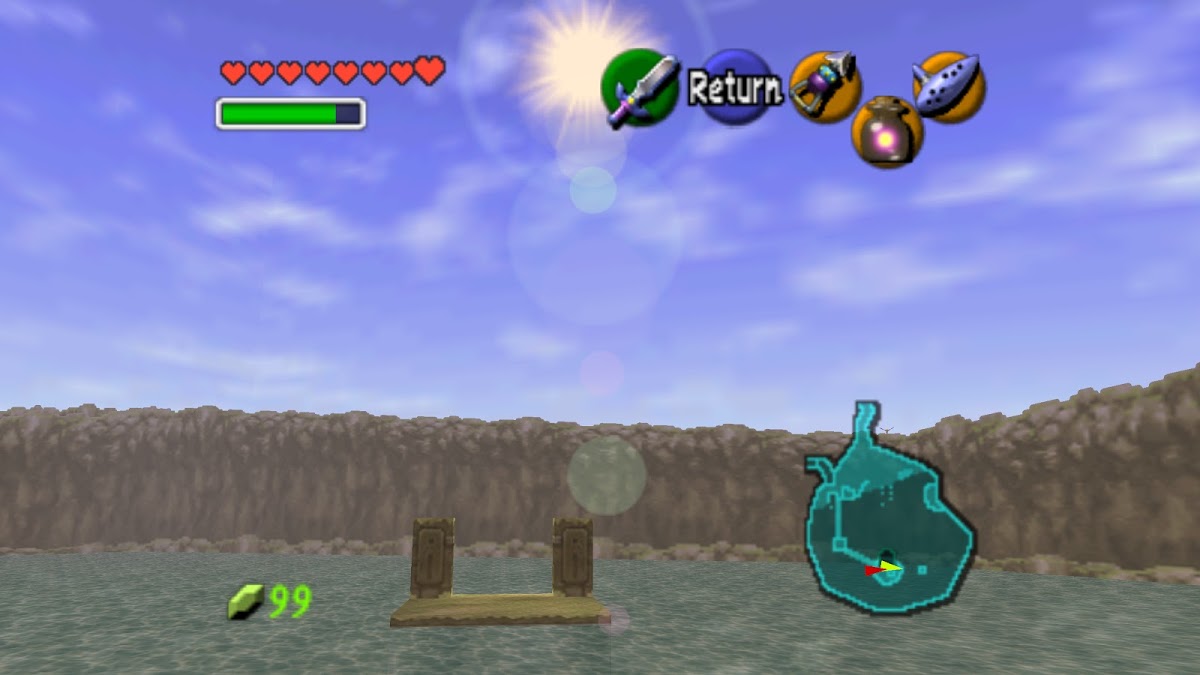 (They made it be morning just as we do this pretty intentionally, which is clever!)

So I guess it's about to go east?


Final note: There's this weird sense to this game about going back to the "way things were". Here both Ruto and Sheik mention it, that the world will return to its "original state". That that's what we're doing. Which is just a strange message to have in this game about adventure and exploration. And growing up.

I could talk more about this, but not sure you're here for a political discussion, so I won't dwell!

Next time, we go East, Young Duck!
(that's a reference no one will get.)