Ok, so back to business! It's been a while since I did one of these and I decided to pick up my series again. This time it's for real: I'll play Ocarina of time for 30-40 minutes every sunday and perform a writeup like this, for the next many weeks until I'm done or the game is finished (you can interpret that as you will ;) ). You can hold me to that!

Picking off, I'm starting at part 4 like all good things, so if you want to know what happened previously read part 1, 2 and 3 in the links.

But to briefly recap, I'm Link, that's Zelda in the back, and I'm in a castle. All right, let's boogie. 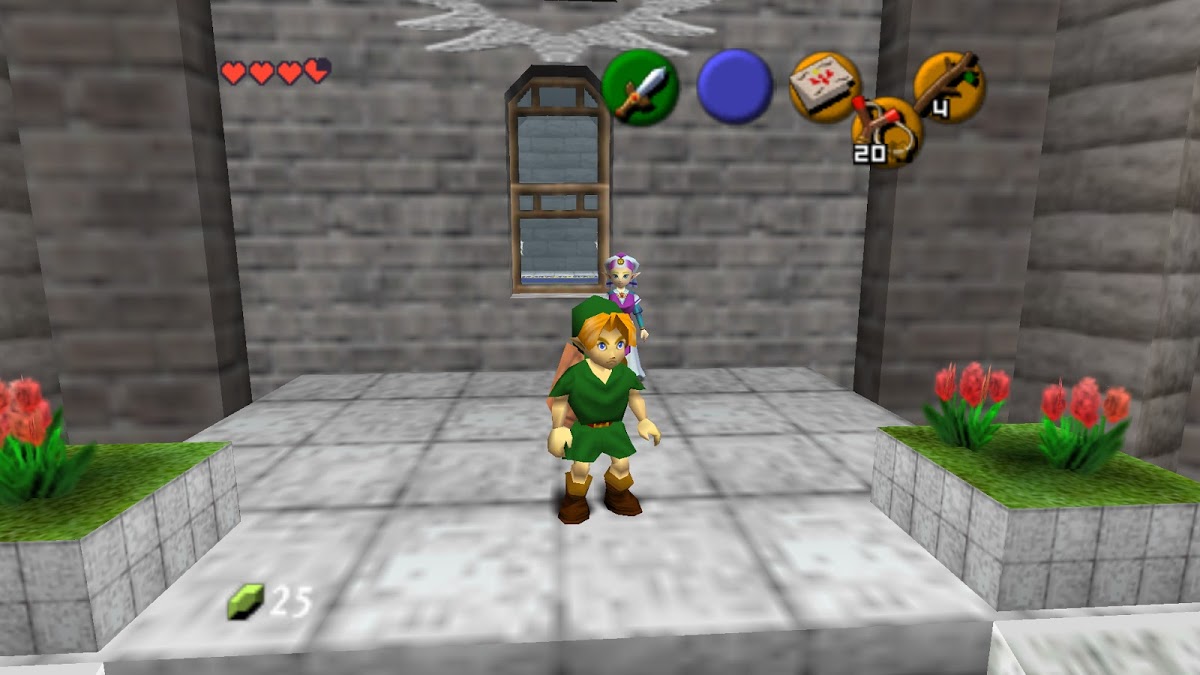 Zelda's advisor (? I thiink?) "Impa" of the "Sheikahs" greets me as I'm about to leave and has something important to teach me: A song!
More importantly, she teaches me "Zelda's Lullaby"--which is, like, fine. 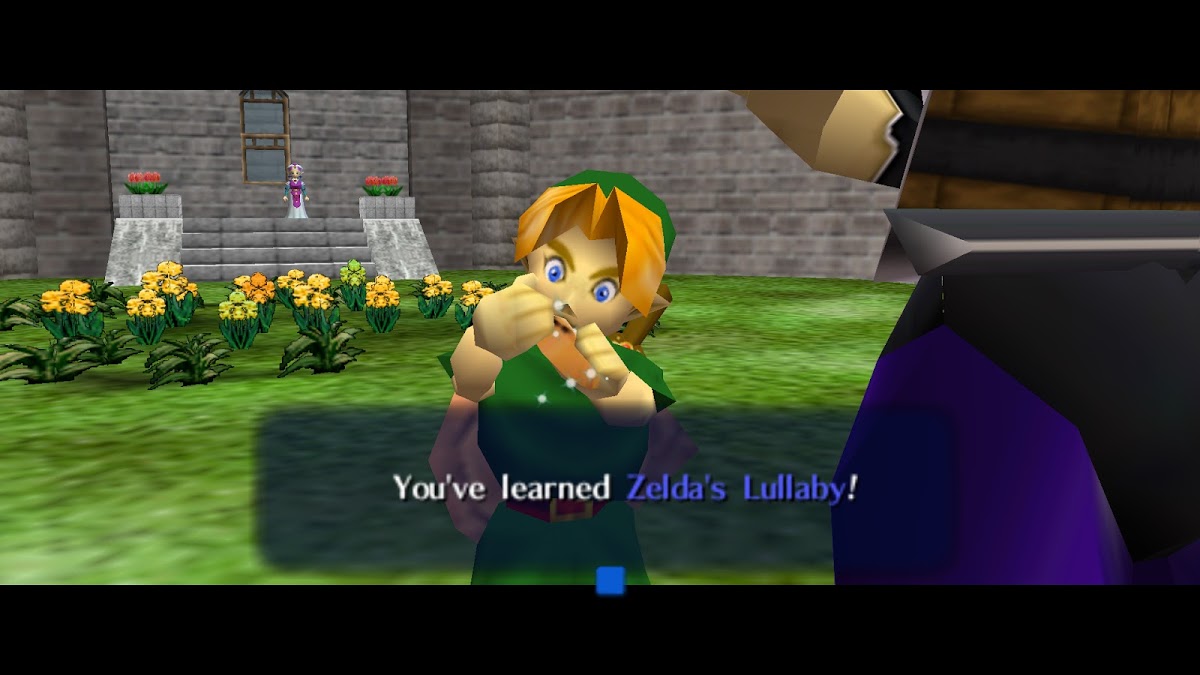 But Link's hella hyped about it! So I am too.

Then she escorts me outside, because the guards a apparently still a threat, and tells me where I should go next: 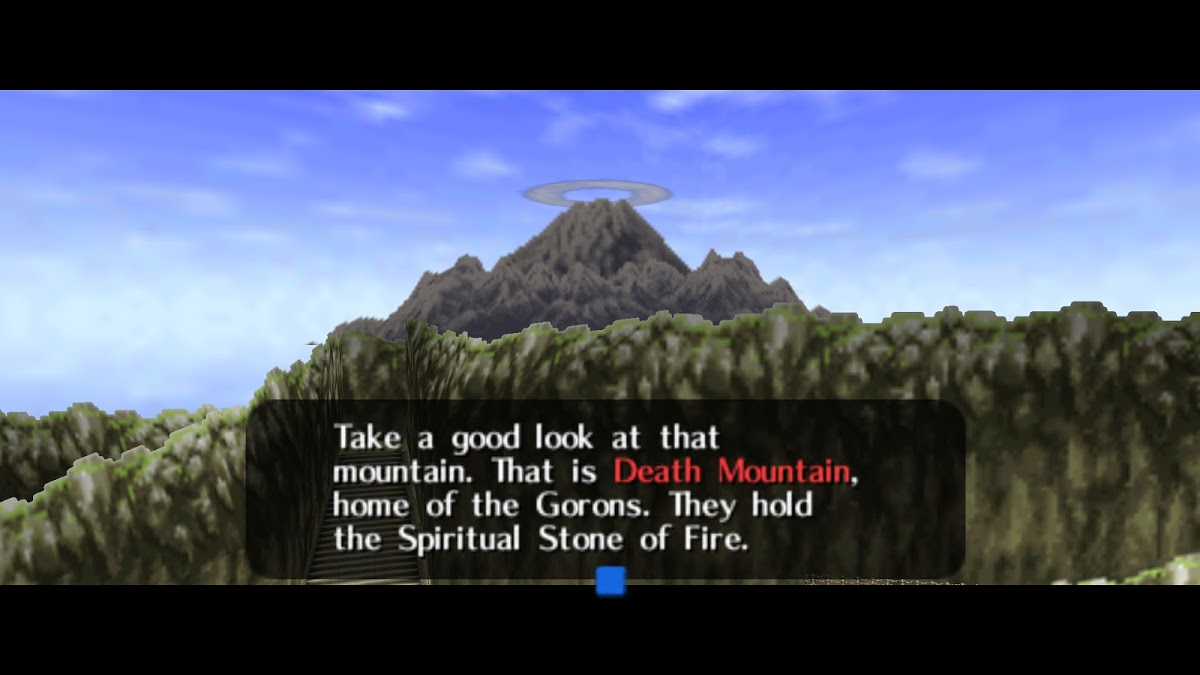 Ah, right, I have to find some Spiritual stones, that's what Zelda told me. The first one is the Stone of Fire, apparently. Ok, then! Impa also tells me that on the way is her village "Kakariko Village", where I should stop by first, so onwards we go! 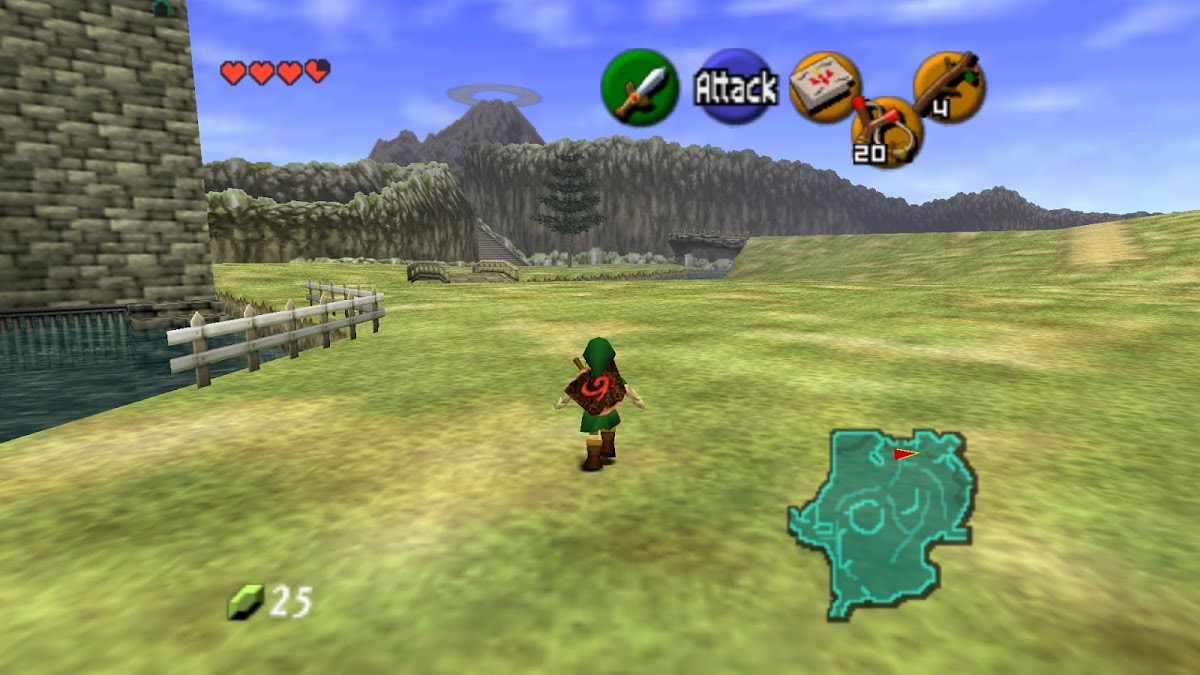 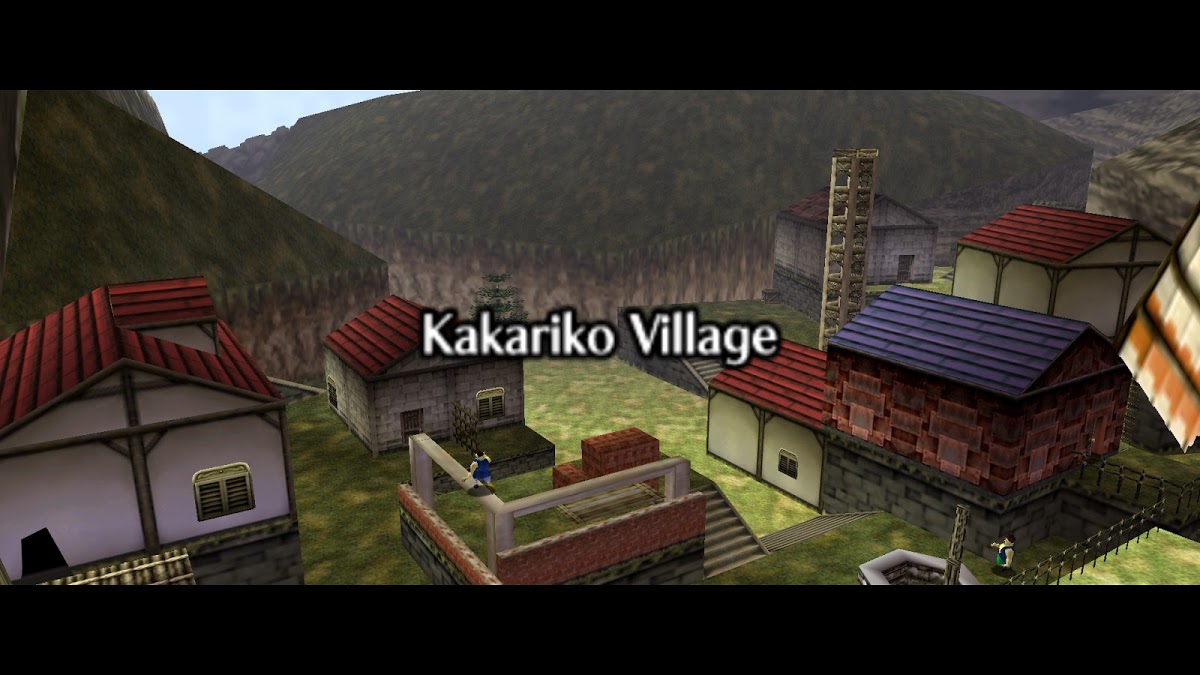 That was easy enough to find! Look! Running blue guys! The number 2 tourist attraction in Kakariko Village.
Number 1, of course, being 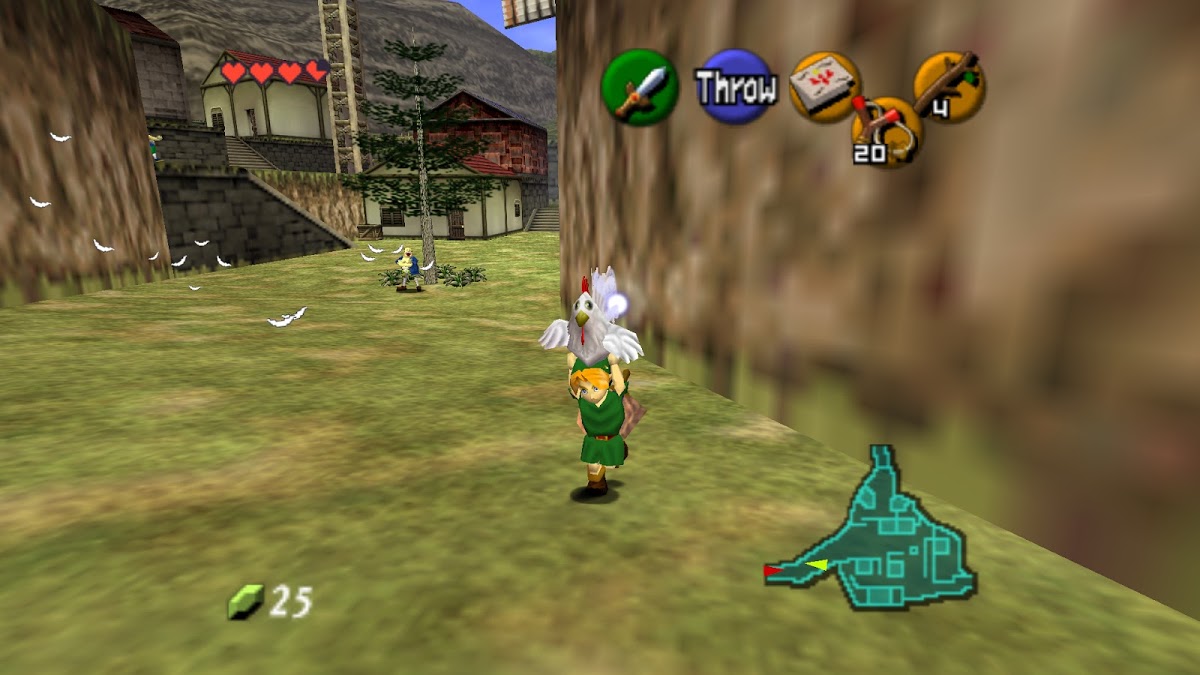 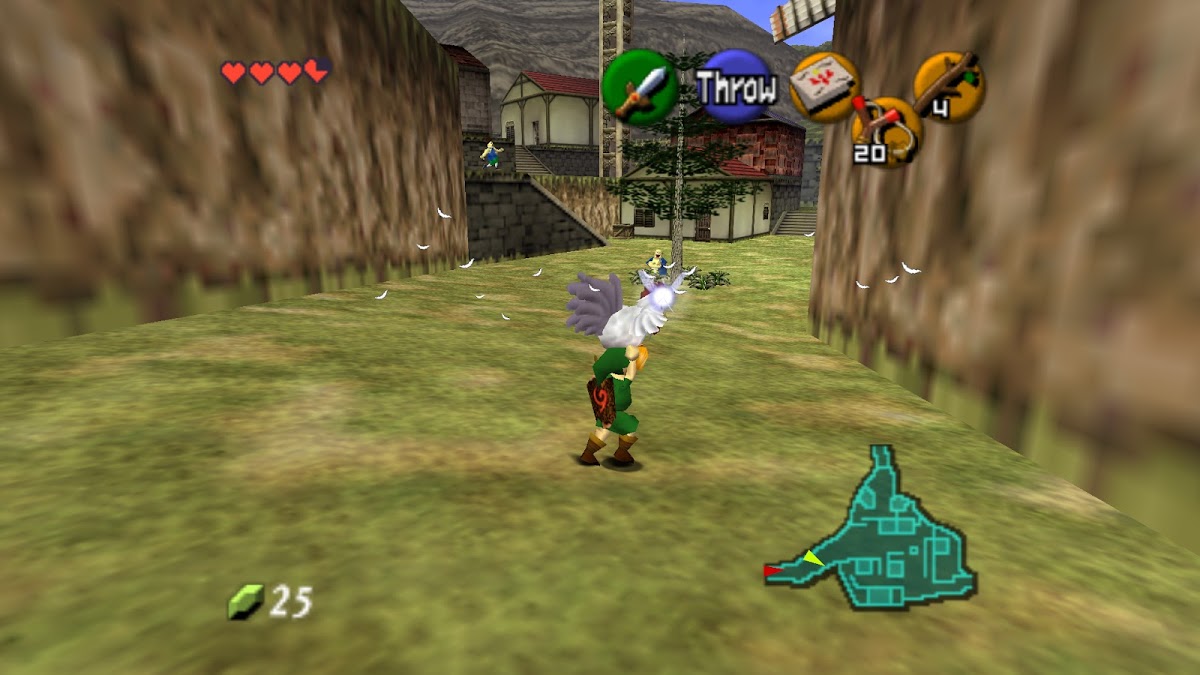 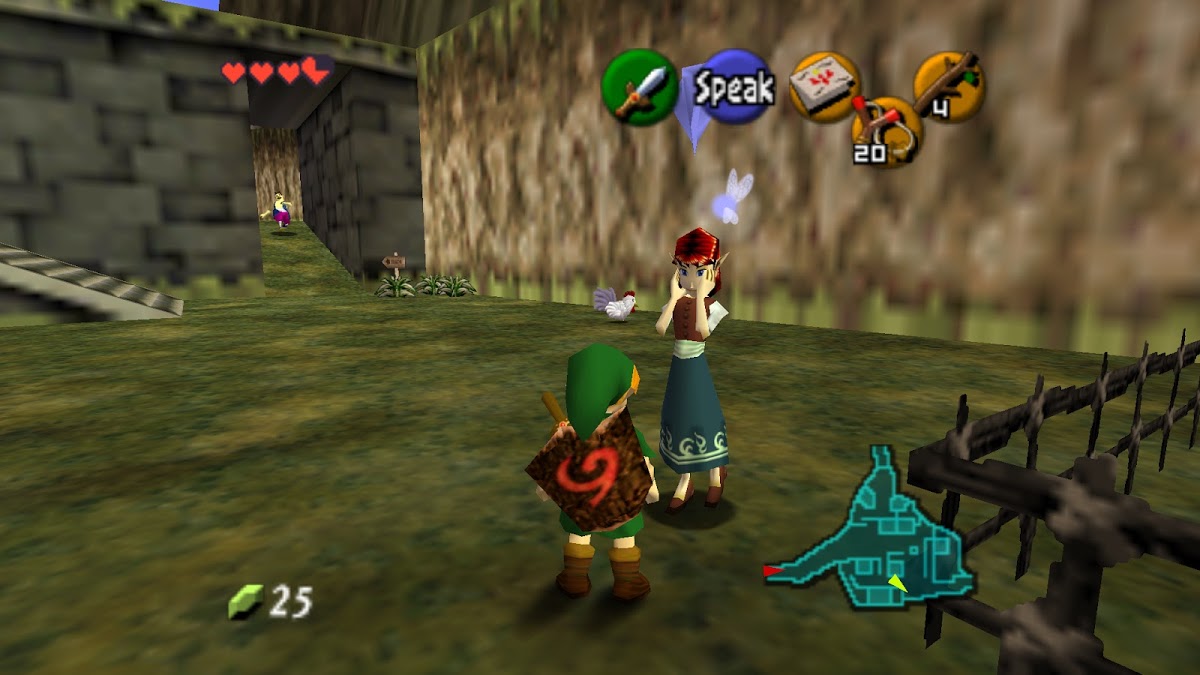 Ok, so here's the deal. This woman here lost all her chickens---wait no, uhhh... "cuccoos" (right)--from the pen and I'm naturally the right guy to get'em back.
I knew a few things about Ocarina of Time before I played it, and this quest is one of them! The Infamous Chicken Quest.
All right, a little more exploration around town before I get to work, to learn that the Running-blue-guys(TM) are actually supposed to do work but their boss is complaining they don't do any work and his son is lazy while they complain the boss is making them do too much. Someone should look into forming a Union for these guys. That should be my job, really. I'd be real hero, then. Not some chicken-grabber. (uhh wait.) 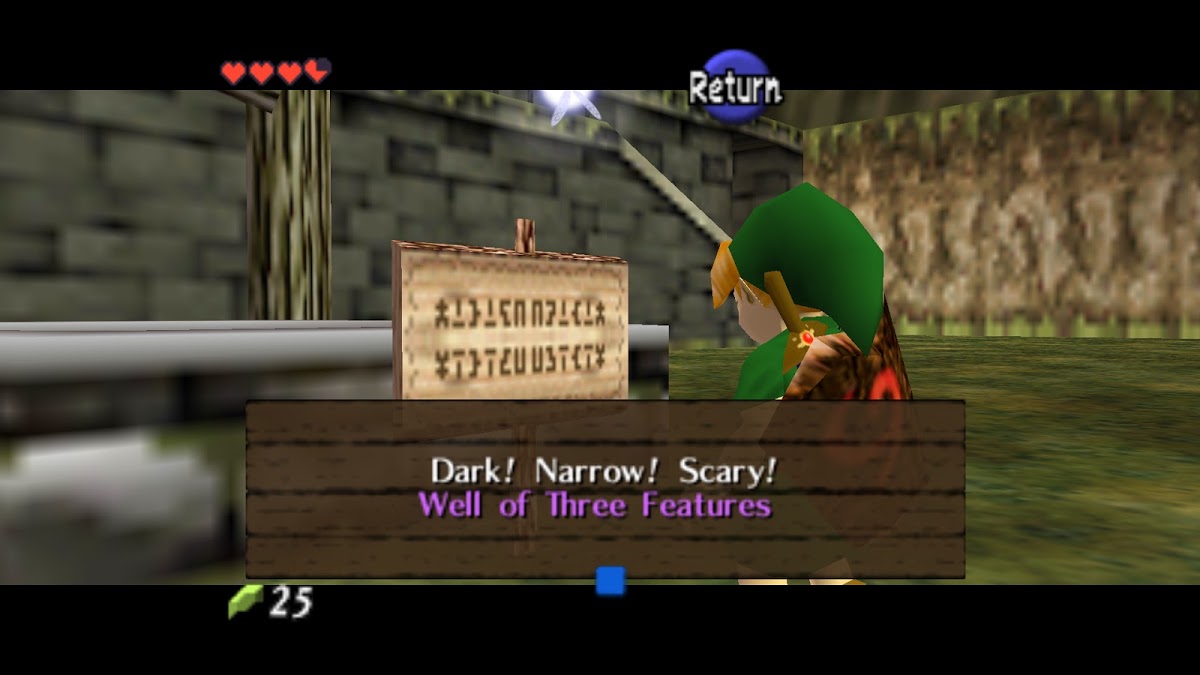 Onto the chicken mission, we quickly learn the true secret behind these chickens: They can make you levitate! No wonder they're so important! I quickly find the first three chickens and set onto some of the harder ones. Like this one, Link's greatest challenge yet: A head-high wall. 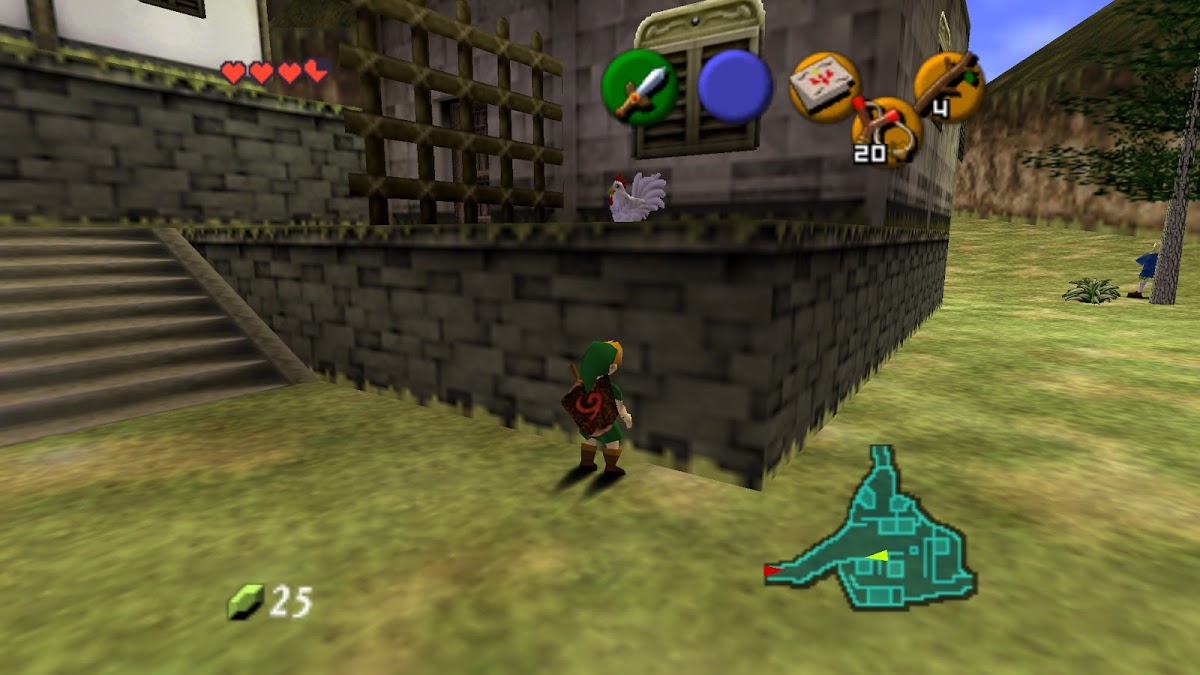 Legends have spoken about the slightly-too-high-walls, the bane of heroes and chickens alike. Wait, how did it get up there?

I go around a bit, but can't find a way up, but then I try to slingshot through the fence on a lark and find out it works! I hit the chicken and it scours down! Victory!


I explore a bit more to try to find a way to get the last chickens and find a mill with a pretty recognizable song and the guy playing it! 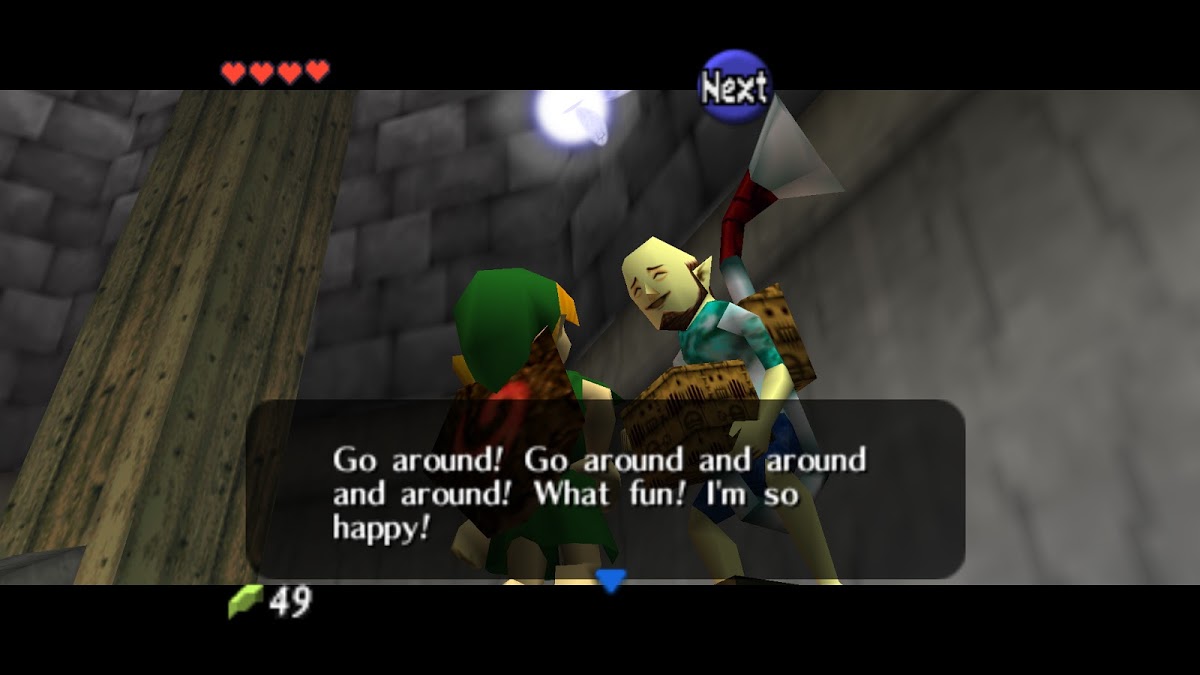 And inside, Na'vi shows us once again her worth as my companion: 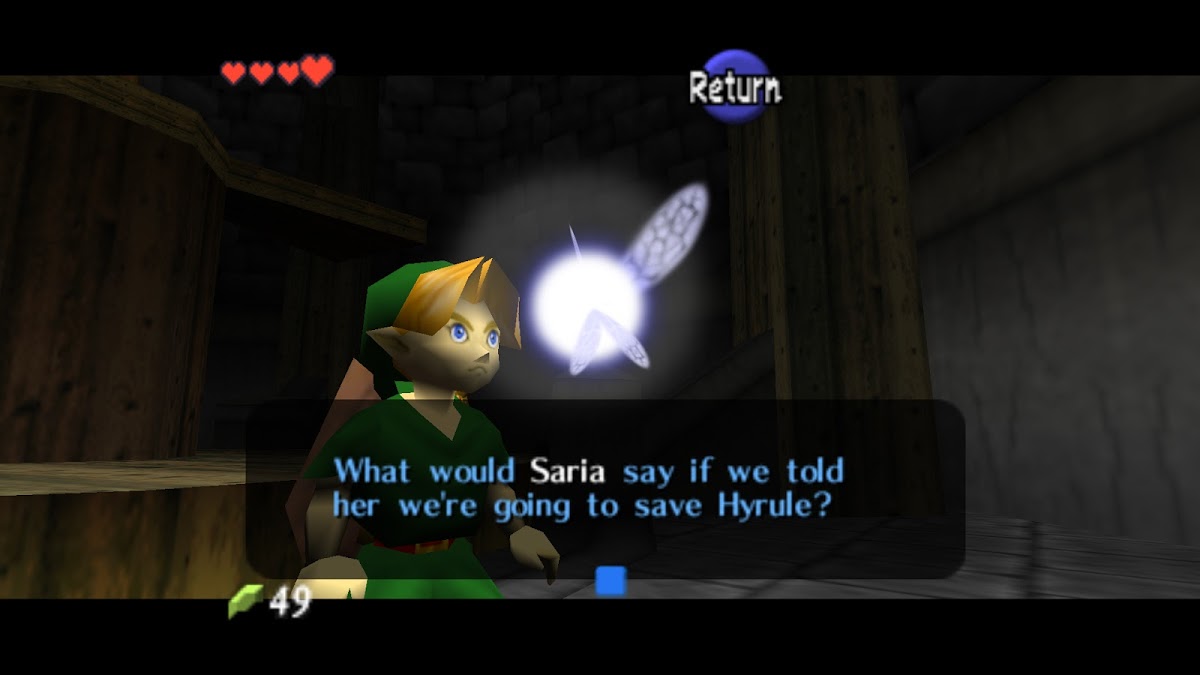 Gee, Na'vi, I don't know. Maybe we should just go and tell her. (Saria, if you don't remember, is the girl back from the forest village)

I also find the exit to the village, but the guard won't let me out. 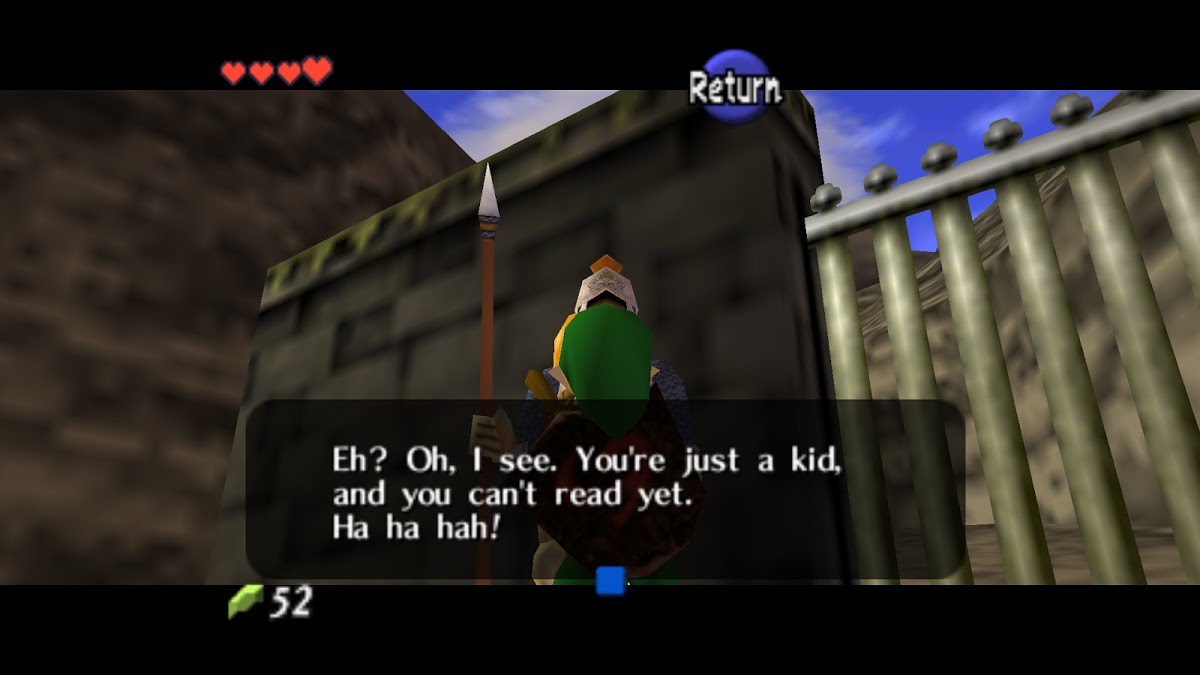 Guards are still a threat.

After a bit more exploring, I find there's a graveyard in the back of the village buut it feels a little early for me to be there, so I jump back again. 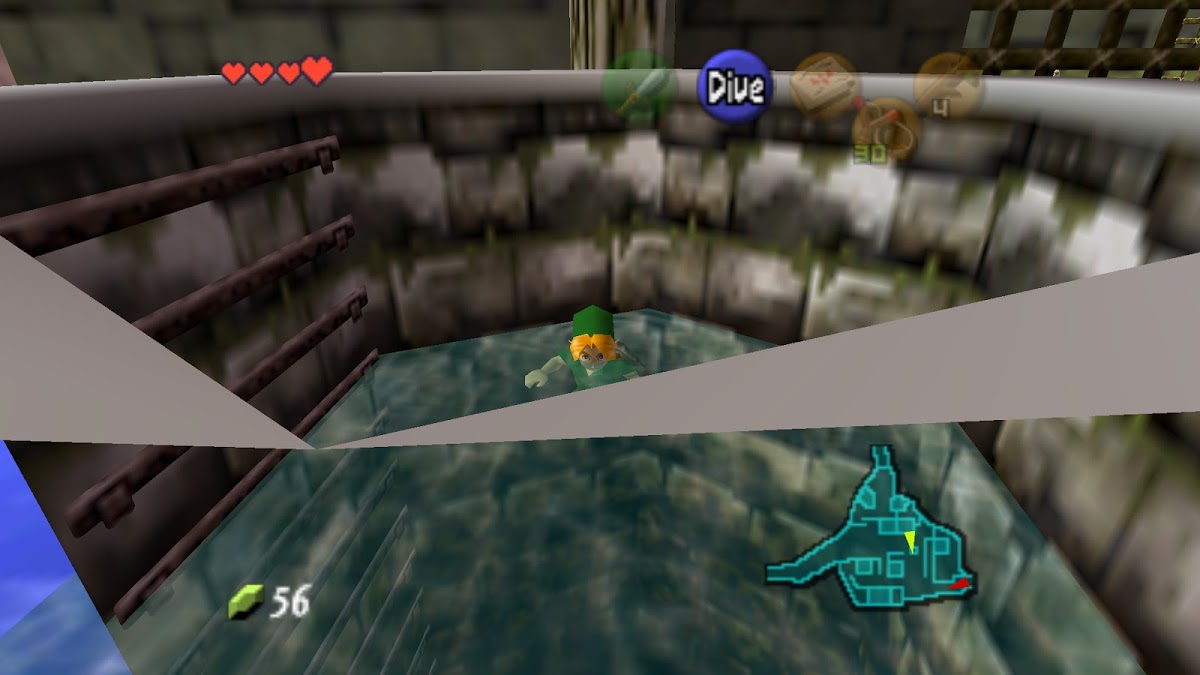 Oh well, there was nothing in there! At least not until i can dive further than a duck. 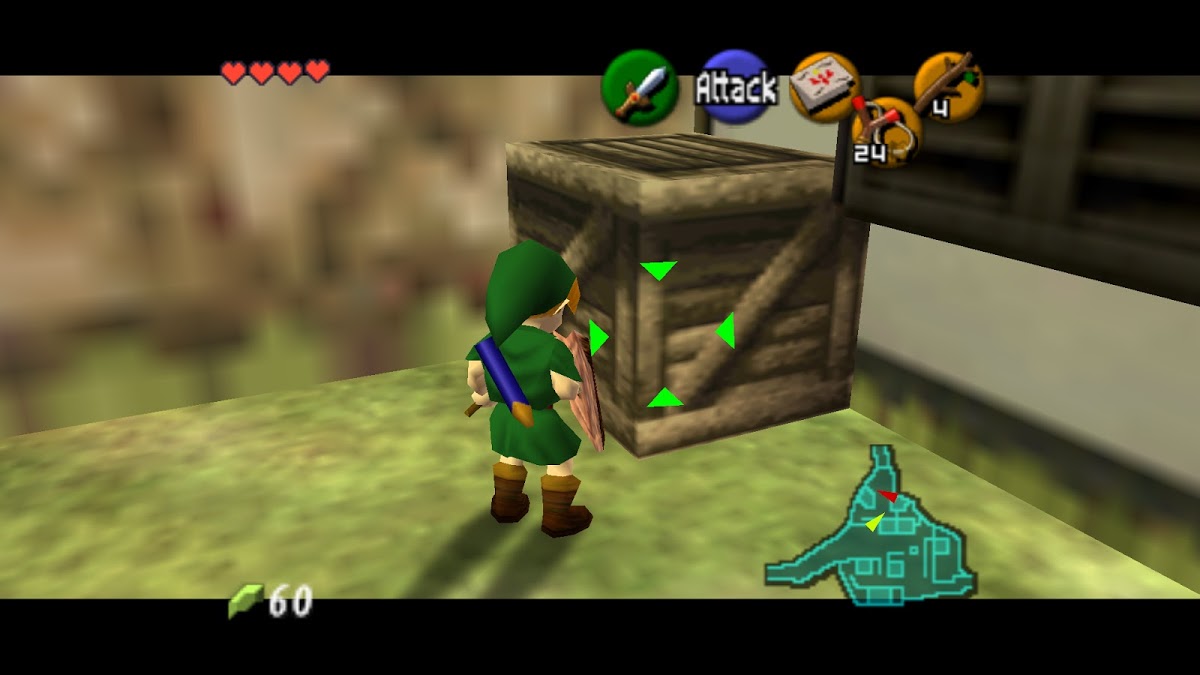 Wait, this box is targetable?! None of the other boxes are... And it makes chicken sounds.... Well then! (Okay, I'll stop). I try attacking it but that doesn't work, the box just takes my sword hits like nobody's business. Strong box. No wonder the chicken hid in there.


So, after some more trial and error (and, I'll admit, some googling, because I didn't want to be stuck here an hour) I found that the only way to break the box was to roll into it.
Well, that wasn't established beforehand! All the other things have been breakable by sword so far... You disappoint me, video game.

All right, only missing two chickens now. Problem is, they're behind a super tall fence and there's no way to jump over.
Buuuuttt, chicken can make you fly (literally!) so I grab the chicken I got out of the box and go up as high as I can and float over to a little ledge. All right, last chickens are in the-- 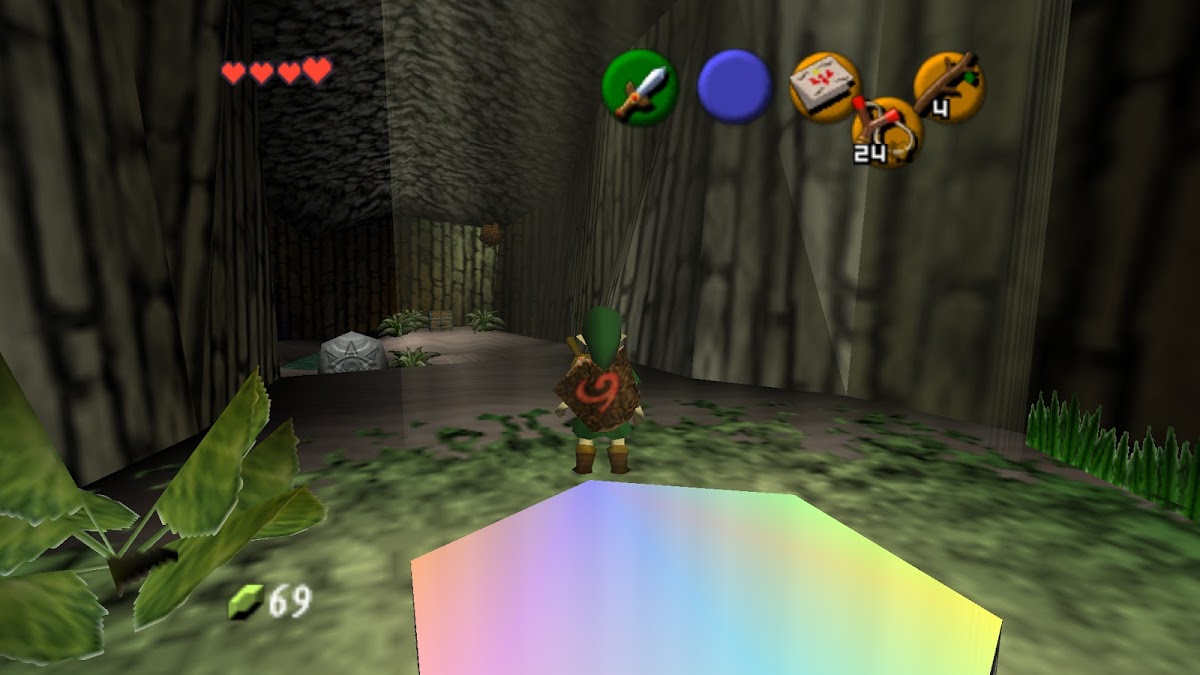 There was a hole next to the chicken. But, it ain't too bad because down there is just a chest and one of those eyestones I don't know what to do with yet. And the way to get back up? 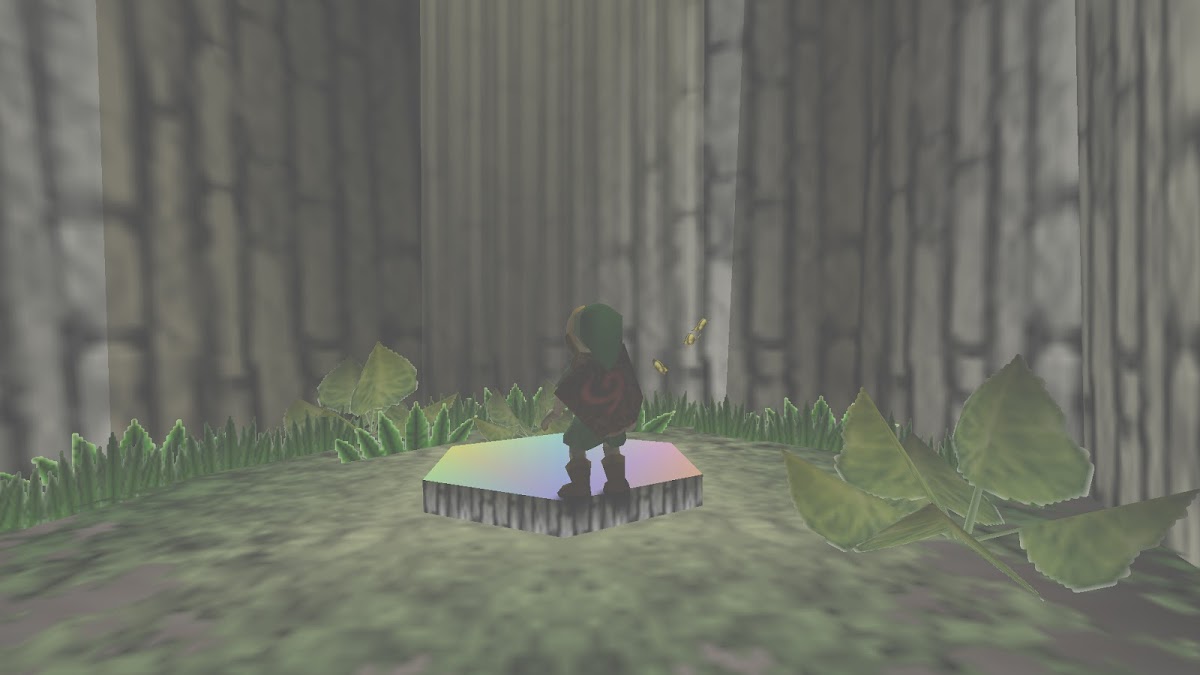 You step into the light. That's how I get up holes. Link's preferred transportation method.


All right, back up, got the chickens and threw them back over the fence, but before I leave the back alley I check out the doors, but the people inside aren't too happy about my intrusion, like this one: 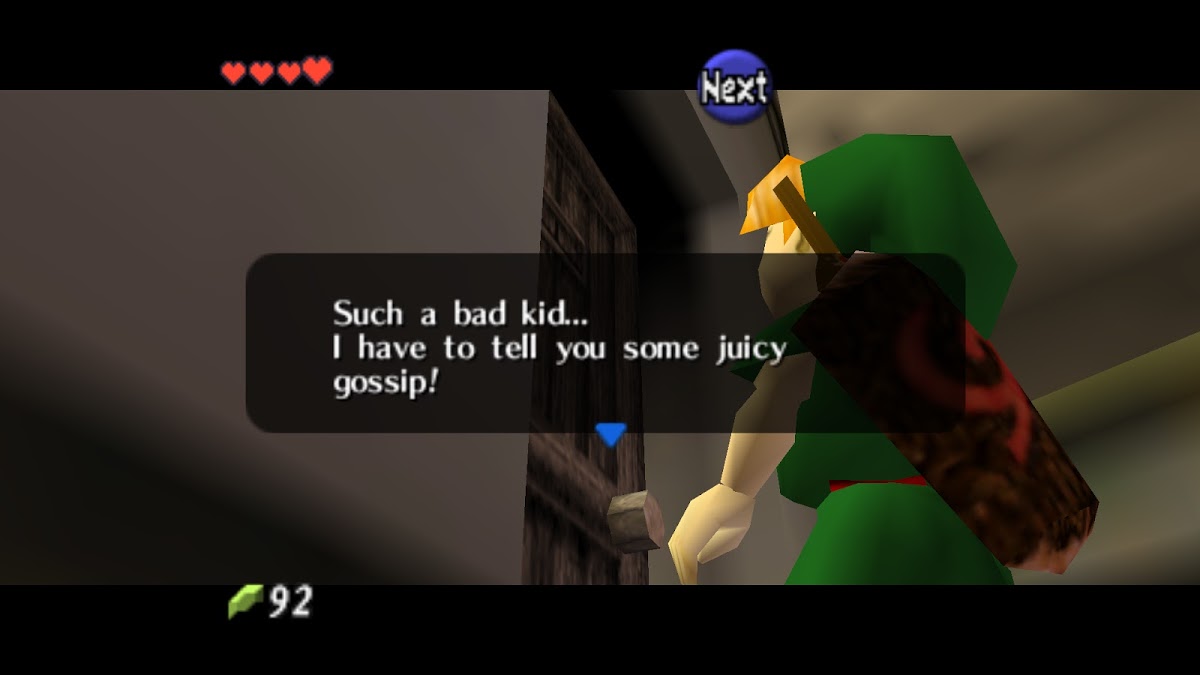 And the gossip is... that the boss has a son. I... Already knew that. Cheers.


Back to the pen and yay, we did it! All the cuccos are in the pen again and the girl is happy and we're happy and we get aaan... 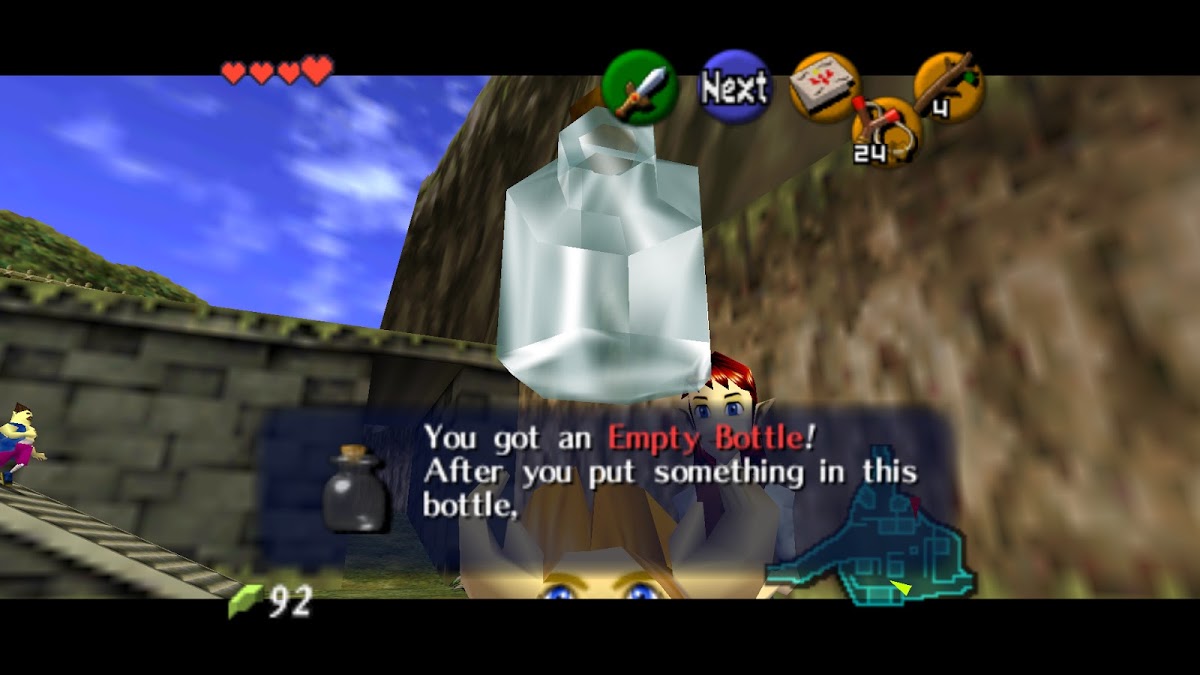 After you put something in this bottle, it will no longer be empty. Logic!

HYPE. I always wanted one of those.


All right, job's well done, I guess it's time for me to call it a day after some Solid Hero Work-- but wait, Na'vi has words. 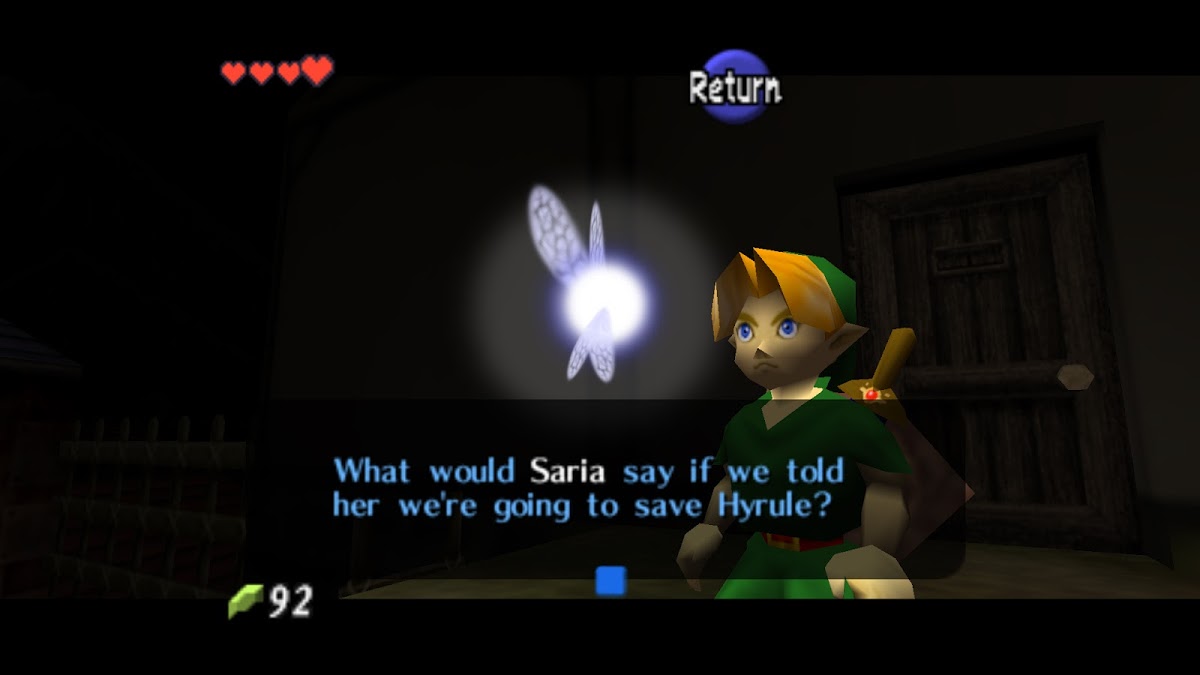 Until next week! Where I'll venture up to Death Mountain! Maybe!