Finally, it's Big Bro time! We've been waiting for this for two episodes now, and now the wait is over. We got the beat, we got the song, we got all we need. Time to drop this banger on his face. 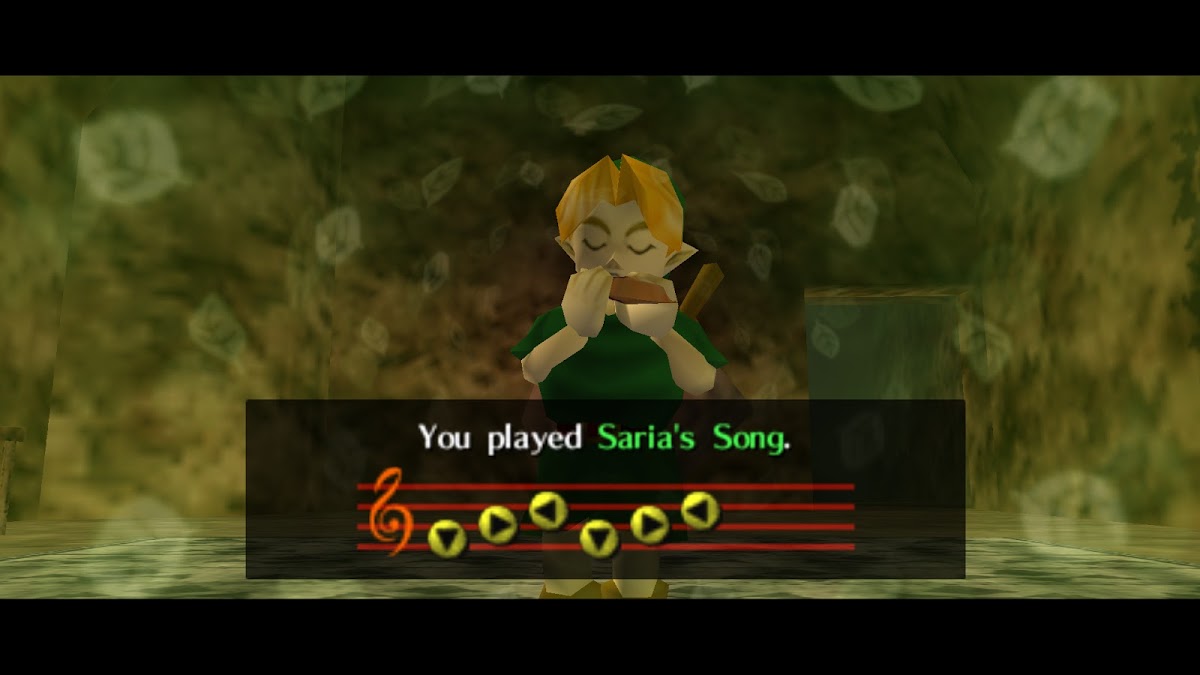 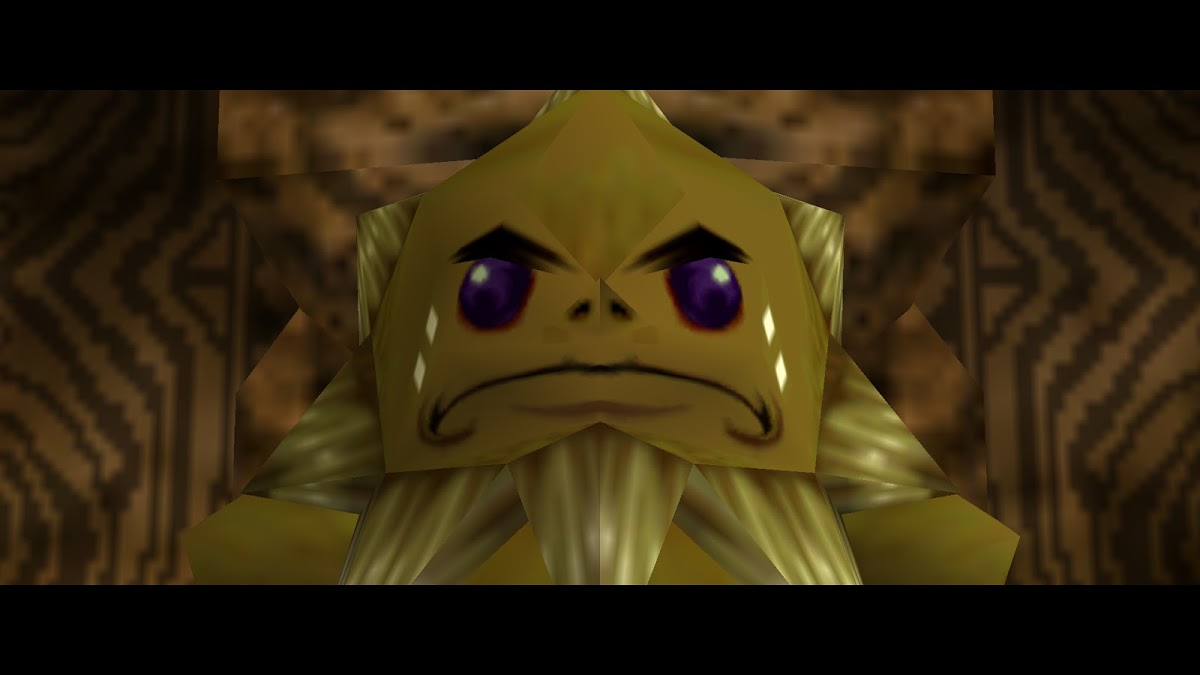 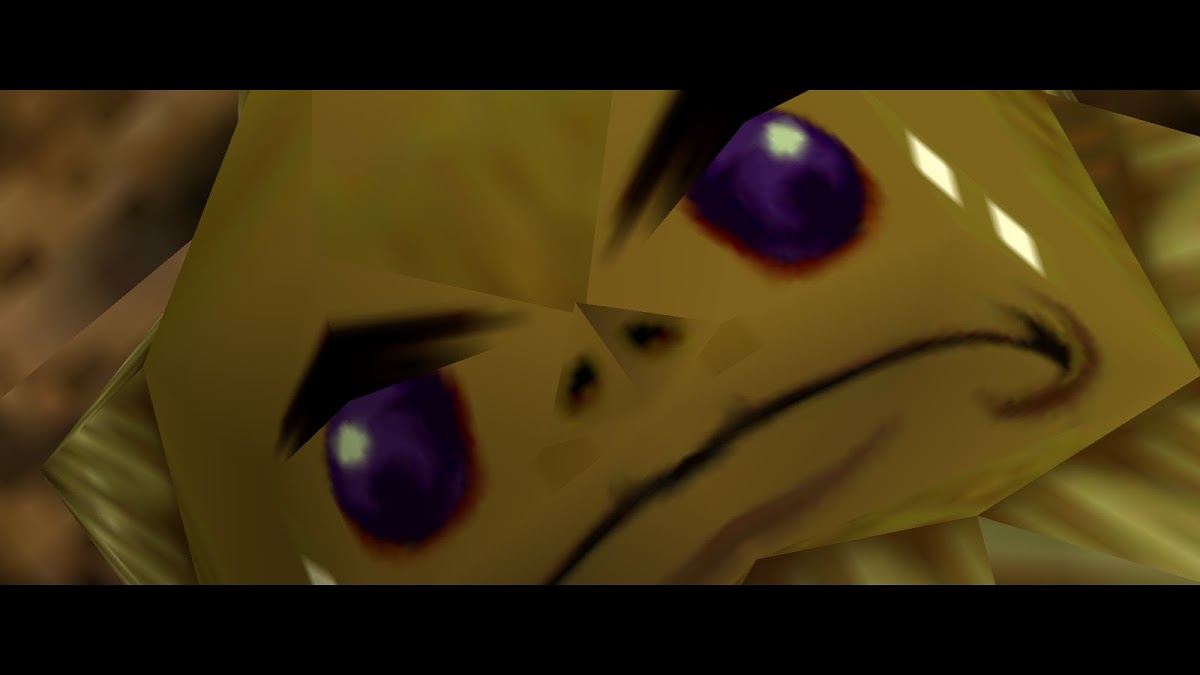 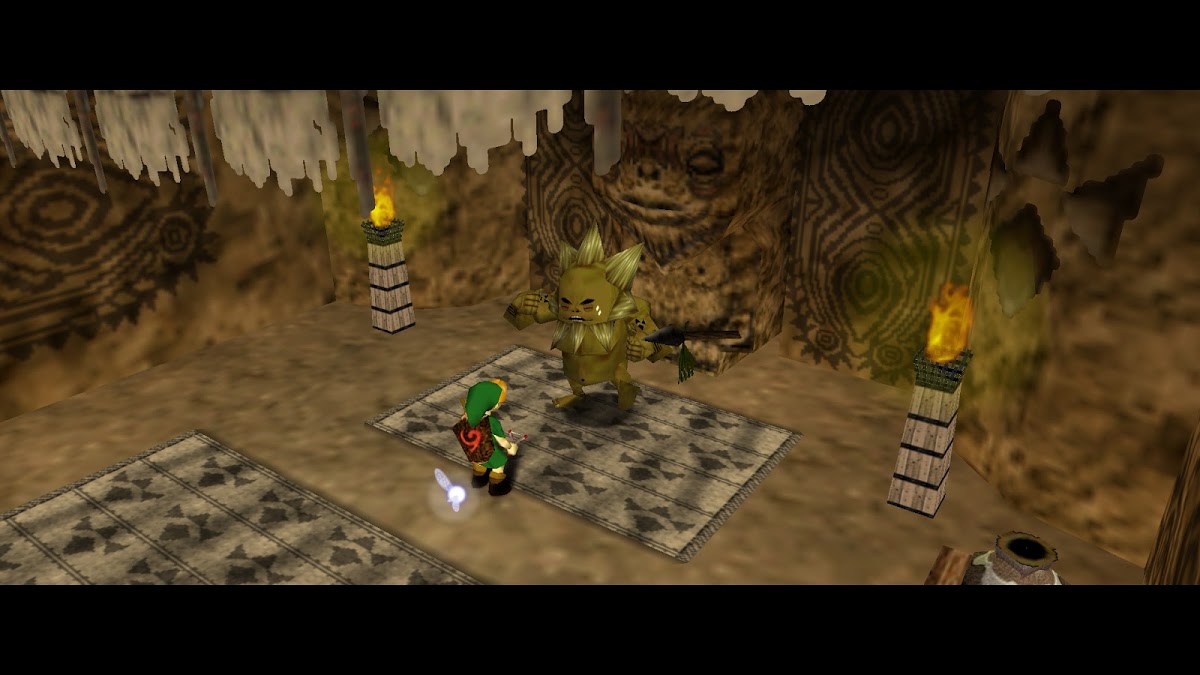 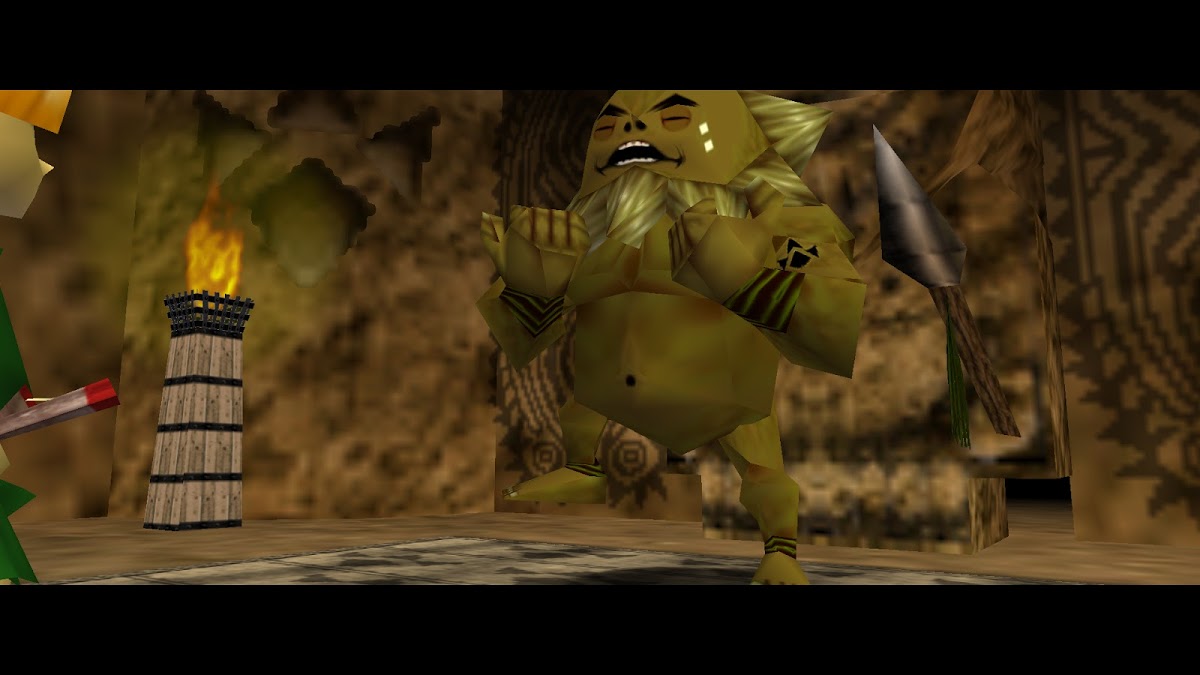 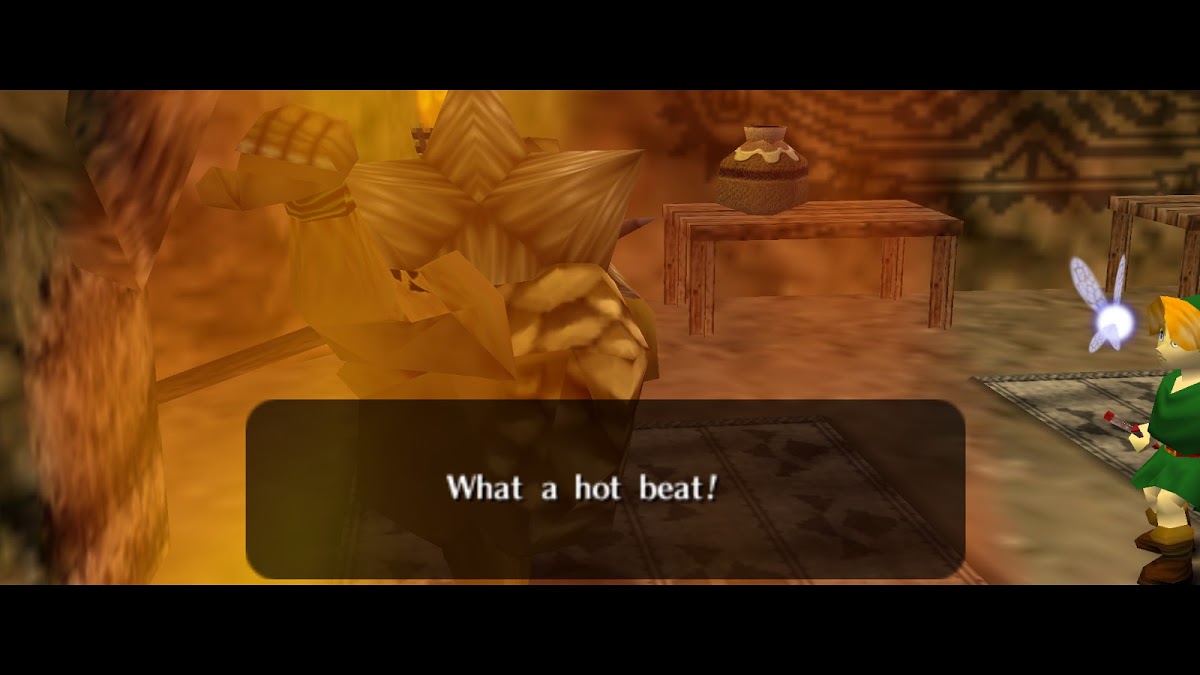 (I was seriously chuckling throughout this whole thing. It was edited surprisingly well for a 1998 game)

After he's done dancing, he goes right back into video game mode, and promptly gives me another quest: Go clear out that "Dodongo's Cavern", and then he'll give me the Stone of Fire.
Coulda seen that comin'.

BUT, he also gave me the tools to do it: A bracelet that allows me to pick up Bomb Flowers! Wee!

Time to test our new powers! 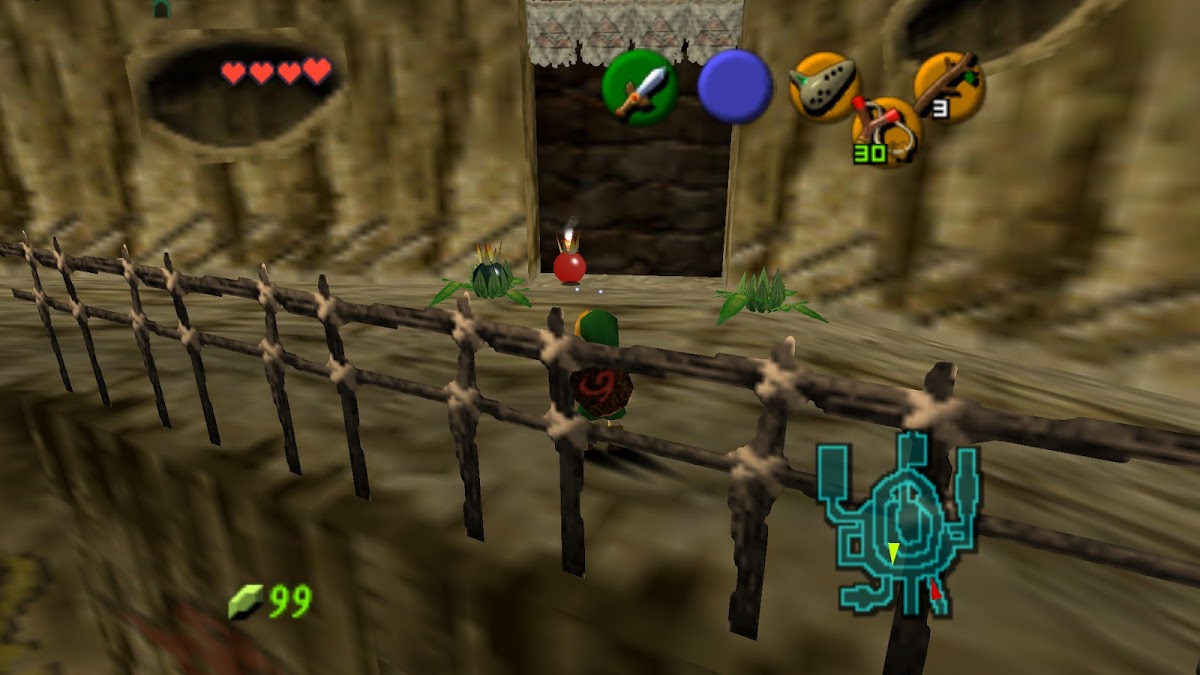 This is worse than Dark Souls.
BUT, behind that is this Giant Guy! (also a Dark Souls move). 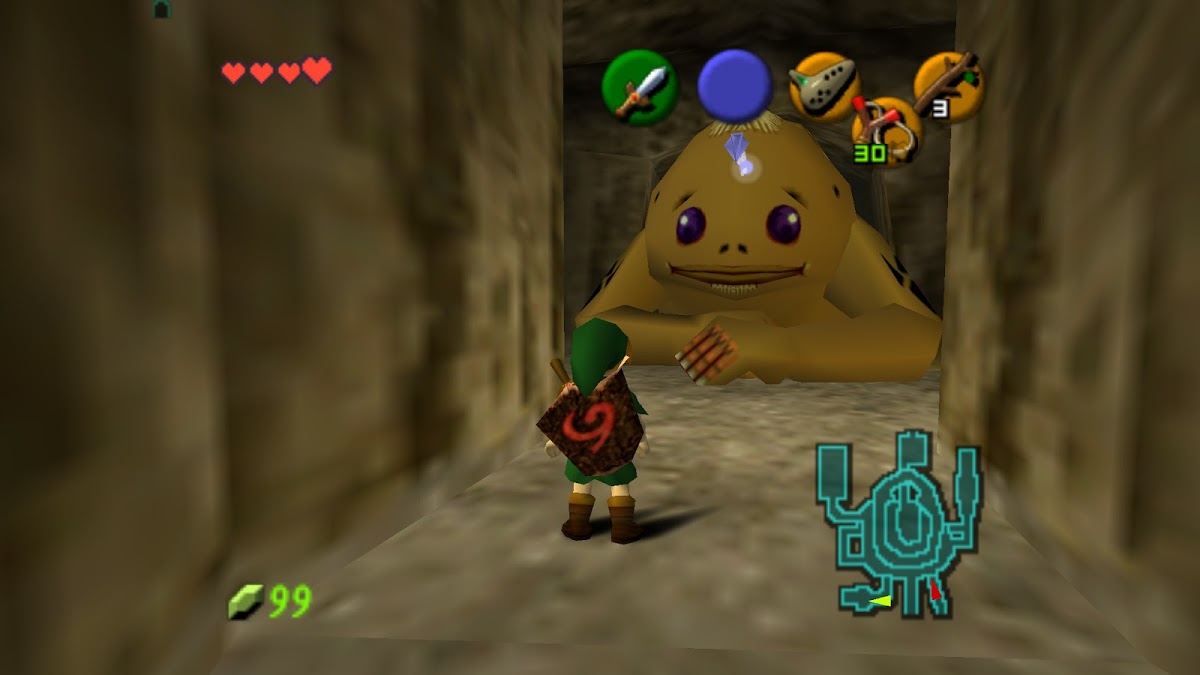 He says he's working on something big(!) that'll be ready in 5-6 years! Geeh, can't wait that long, ma dude. Good thing I'll unlock [Spoilers I already know because game is old] later. Guess I'll be back here then!

Then I go out to the city again and scout for other things to use my powerful abilities for, because you know you gotta abuse great power when you have it.
That's the saying. I'll stick by it.

So, there's this rolling guy I saw before with a sign next to him that says if you stop him you might get something good.
So, we throw a bomb at him. What's the big deal?

He's not super happy about it 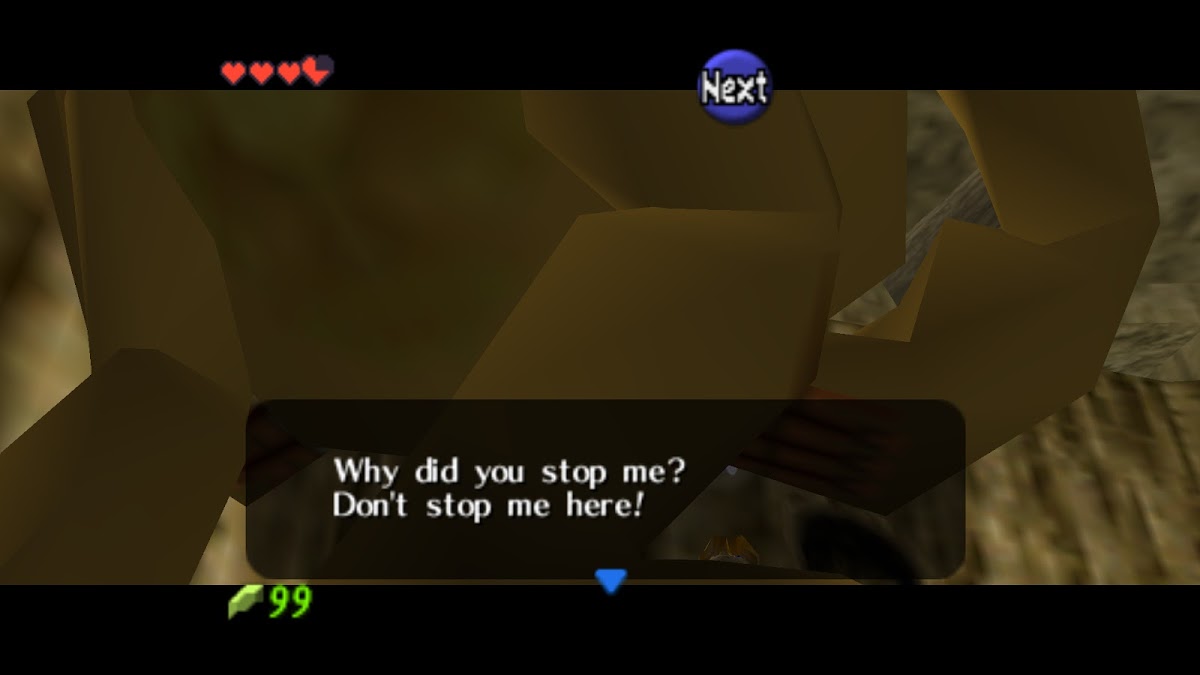 And he doesn't give me anything! The damn liar.
(Although, totally missed this when I played but looking at this screenshot I'm realizing the word "here" is a big hint)


So eff this city, I'll be back when it's got some better stuff. I gotta Cavern to destroy. (I know he only wanted me to destroy the creatures in it, but I got the power of bombs! Some collateral is to be expected.)


I go out to the mountainside and catch a neat look down the valley: 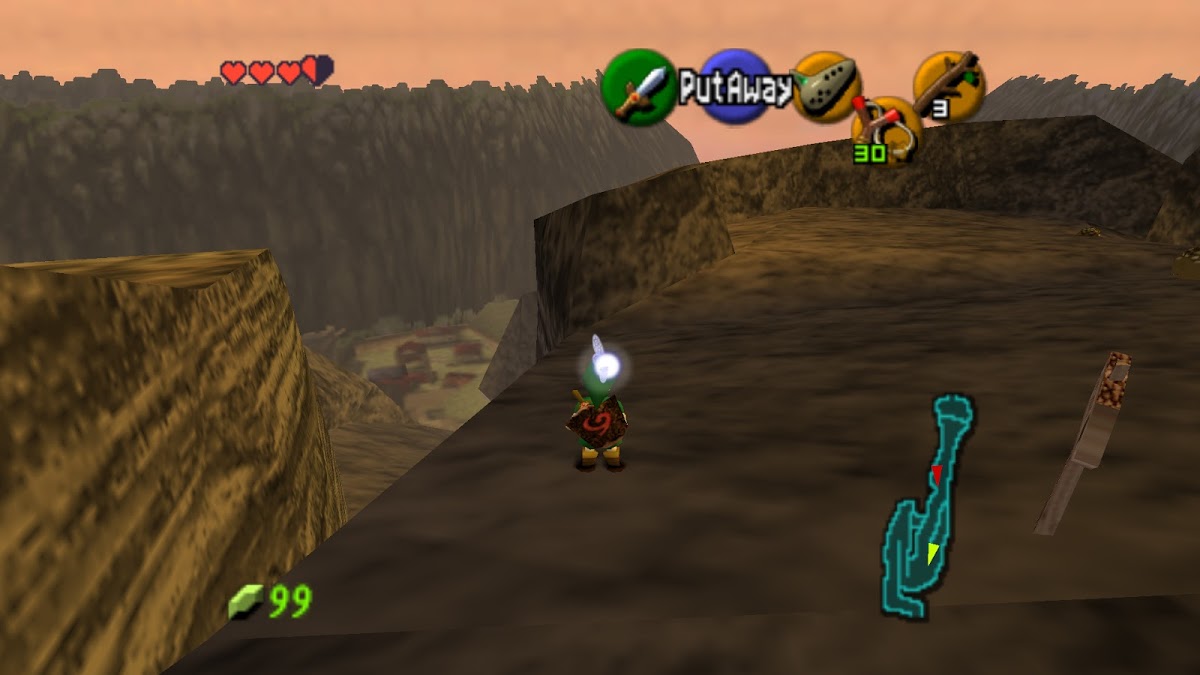 That's Kokoriko (or whatever) Village! This IS Dark Souls!
(I'm starting to understand all the Zelda-Dark Souls comparisons :P)

The Cavern entrance is down-a-ways, so I jump halfway down the mountain again (it's really not that big a trek, they shouldn't have warned me so much about it), and get down there to find an explodable rock as expected but... no bomb flowers...
Hmm..
I scout a bit around and find a little side path next to the entrance to the city where a single Goron is guarding a Bomb Flower!
He's all "we gotta protect this one because it's growing in the sun and that's super rare" and I'm like sure dude I got a rock to explode so I pick it up and realize I can't carry that all the way down to the entrance before it explodes.
So I throw it away and rethink my plan. (The flower regrows after a few seconds, the guy's got nothing to worry about.)
I wander towards the edge and the camera ever so gently tilts downwards to reveal: 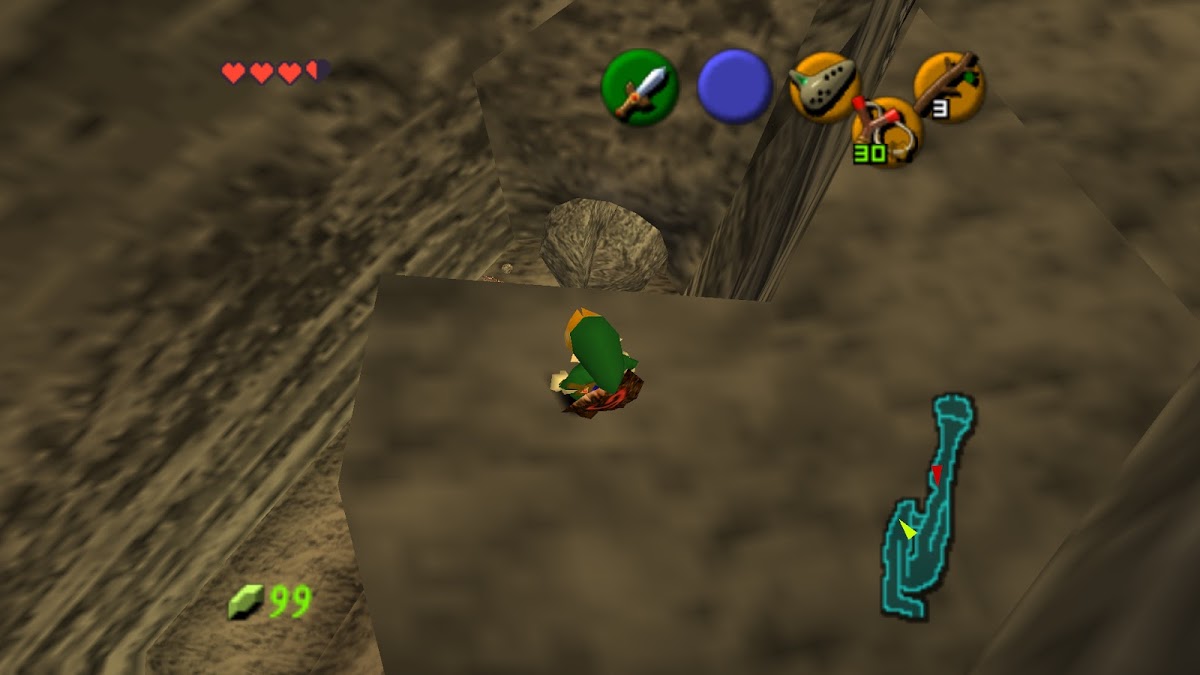 Ahah! Neat! Thanks camera! So I pick up the Bomb Flower, throw it over the edge! 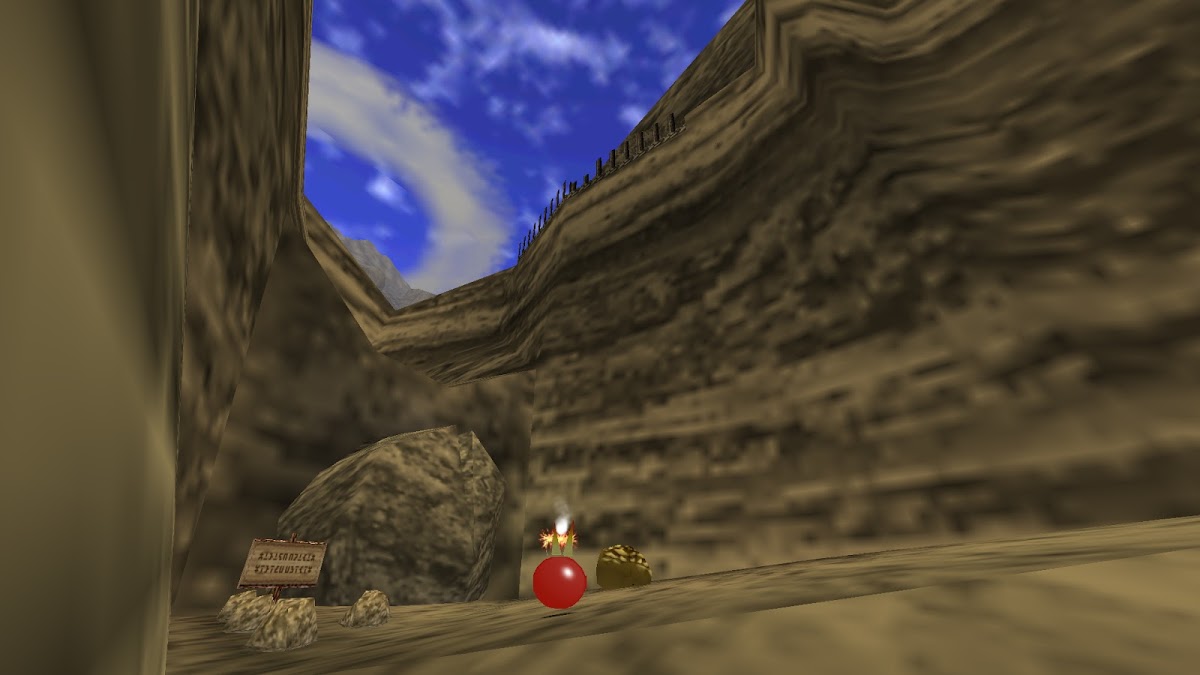 And miss. It's too far away from the door and it blows up nothing.

I pick it up again and throw it again and again and one too many times than I'd like to admit before I realize they made a neat hole in the fence exactly where you're supposed to throw it and through there I hit it first try.
This game knows what it's doing. Sometimes. I gotta trust it a little more.

And it's time for my first real dungeon! I think! 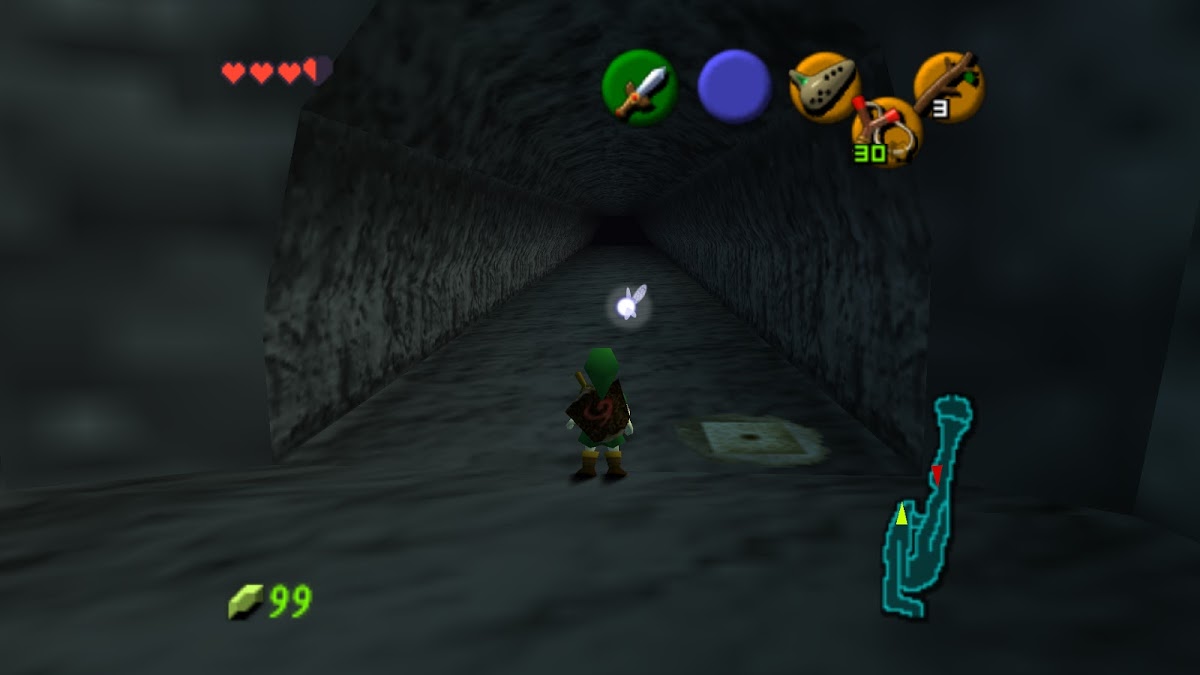 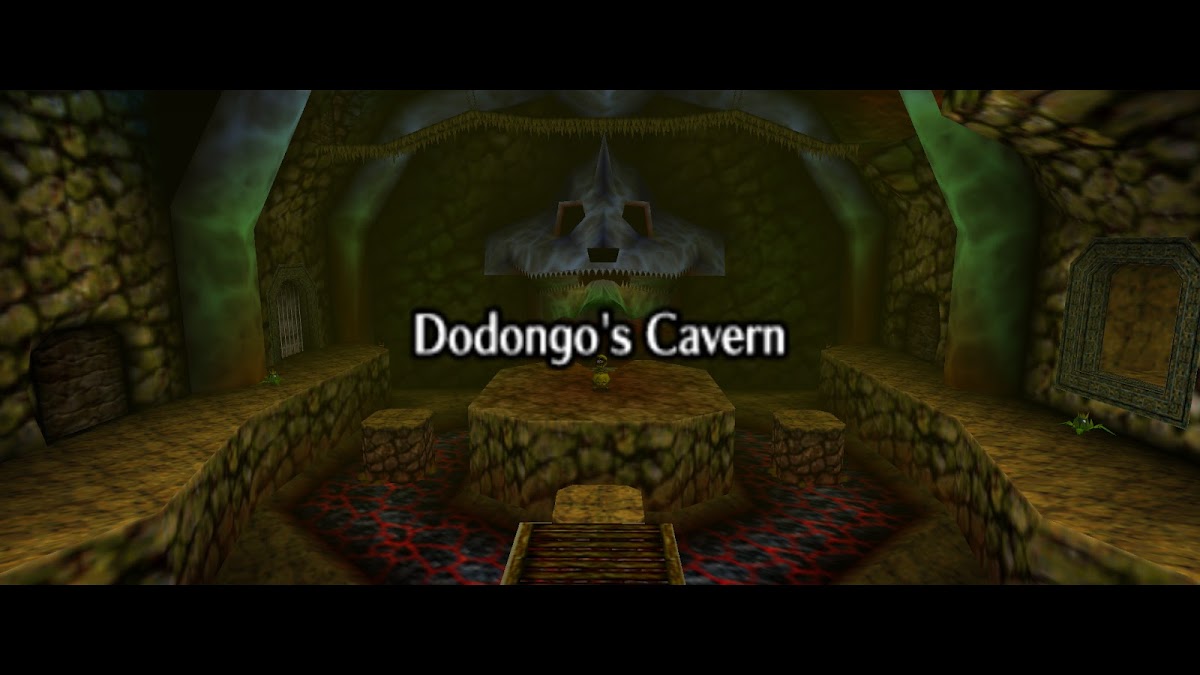 Enter The Chamber of Secrets.

The first thing that grabs my attention are the small little yellow eye-thingy's that are around these platforms (you can see one in the center).

No, that didn't grab your attention? Well, they're enemies. It's a video game. That back-thing's just a prop. (I THINK!) 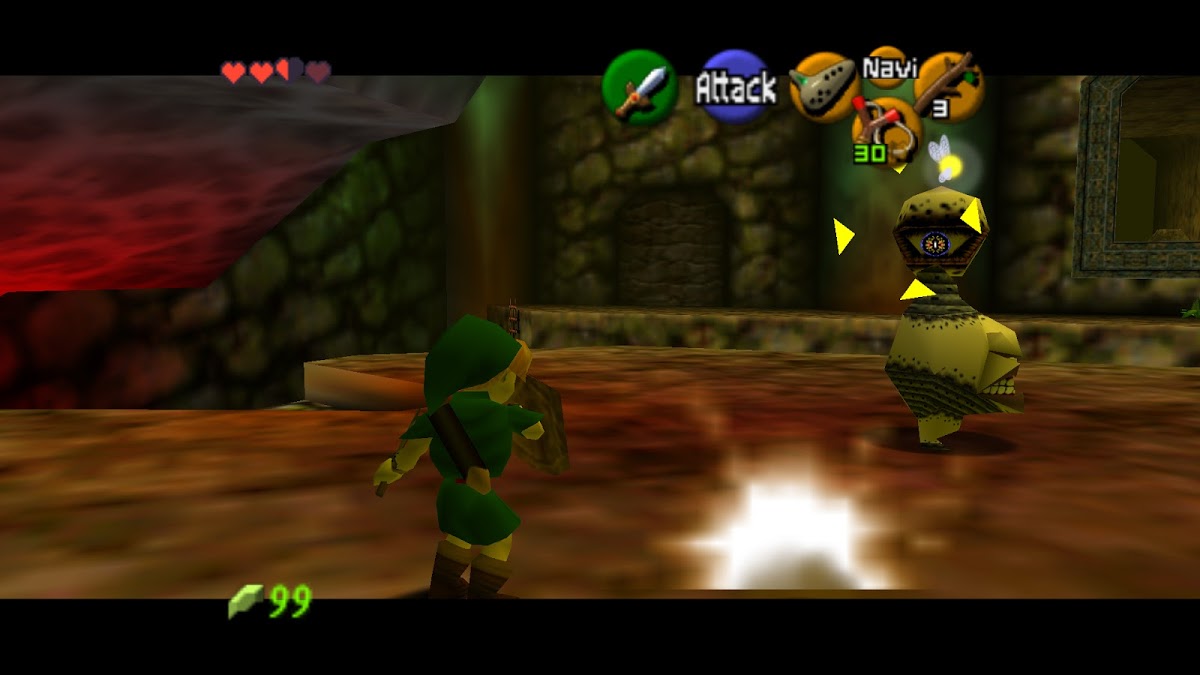 It's these fellas. And they shoot this nasty blue laser at me! What is that technology?! (Not pictured because if I stopped to take a screenshot of it I'd get hit. And they literally don't stop shooting that laser when you're close to them. 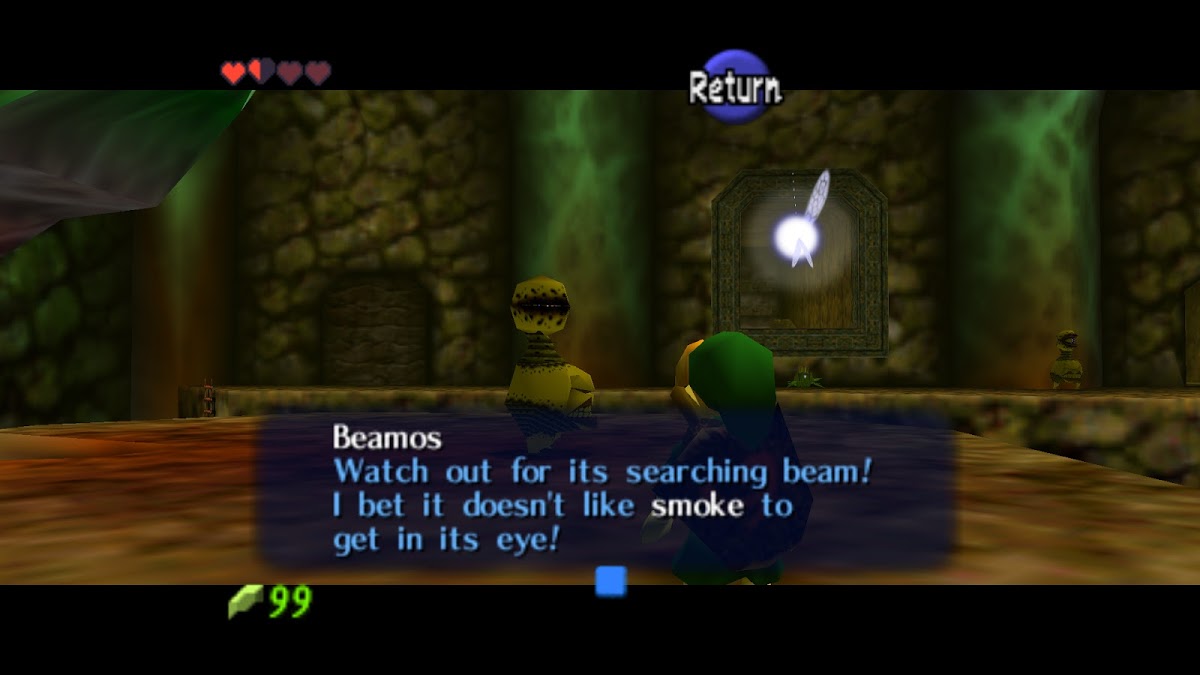 Smoke, though? How'd I get smoke? Fire?
Let's just try blowing them up.

I go past it, and pick up a Bomb Flower and throw it at one. It explodes and lo and behold, the "Beamos" dies. There's smoke for ya.
I use the same flower to break through the wall and find the Dungeon Map! Yay! This is a Dungeon!


But I'm low on health because I did some whoopsies blowing that first one up so now I got a constant incessant beeping. But no worries, just gotta blow these other guys up.

The next one I try to blow up is in the center of the room, that you can only get to by jumping on these platforms, so I pick up a bomb, jump over the platforms, place myself right to throw it and...
place it down in front of me.
You see, when you run, while holding a Bomb Flower, you throw it. When you stand still, you place it neatly at your feet, waiting for it to blow you up.
So I panic, and try to pick it up again but then this happens: 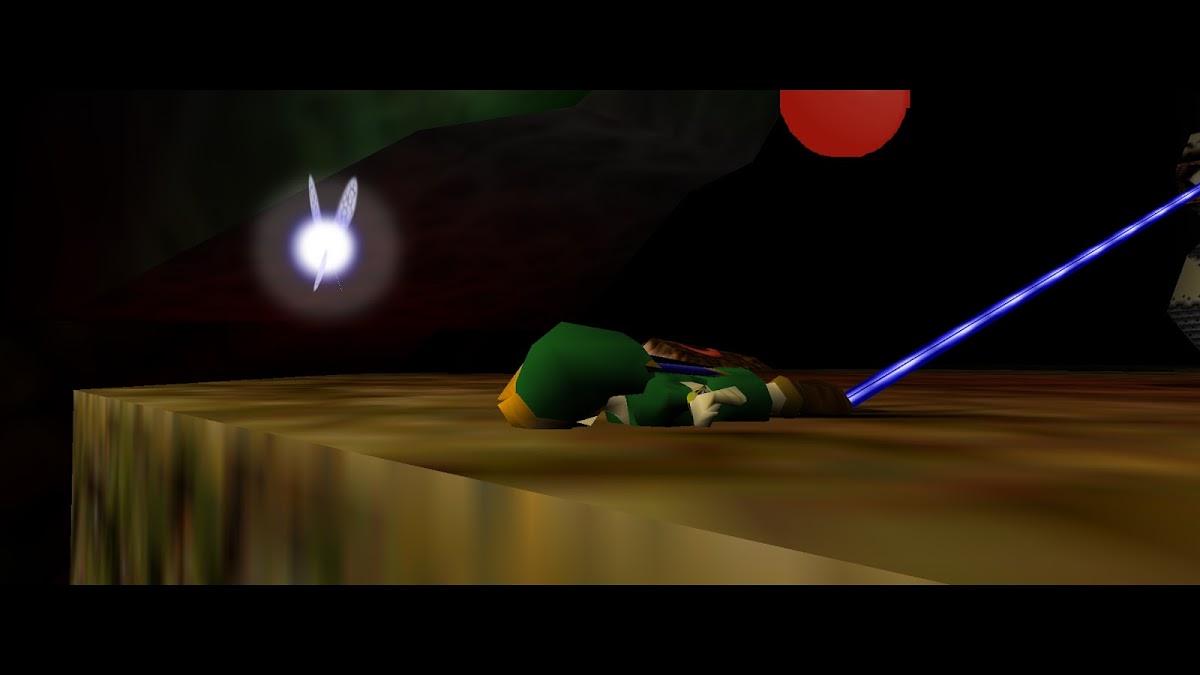 Which is a pretty silly screenshot for two reasons:
1: You see the laser there (finally!) hitting my feet, and above Link's dead body is the Bomb I didn't manage to throw, hovering mid-air because the laser killed me instead of the bomb as I held it.
2: Na'vi's just floating there.
Just, nothing in that screenshot fits together. It's so off it might be my favourite shot yet.


I think this is the first time I died, though, so I get to test how Ocarina's death mechanics work!
Spoiler: They're not Dark Souls.


In fact, they're surprisingly generous. I kept all the progress I had (meaning I kept the dungeon map), and the only thing that respawned was the enemies (ok, a little Dark Souls), but that'd happen anyway if I just left the room and came back, the previous dungeon told me.


So no biggie! Time to progress. 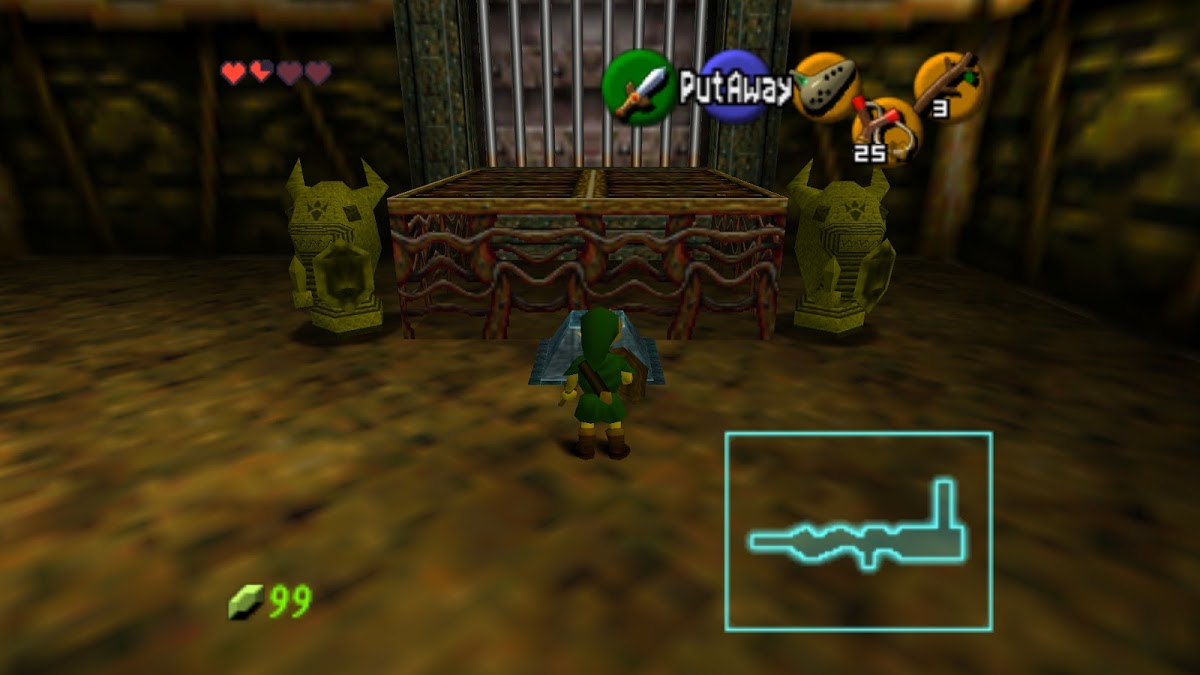 Aah, the classical door-switch problem. Good. Let's get this over with and never see it aga--
Who am I kidding. I'm gonna see it again.

And I'll end it here because I wasn't going to finish the dungeon in one episode anyway. But you'll get one final image of the next enemy I faced: 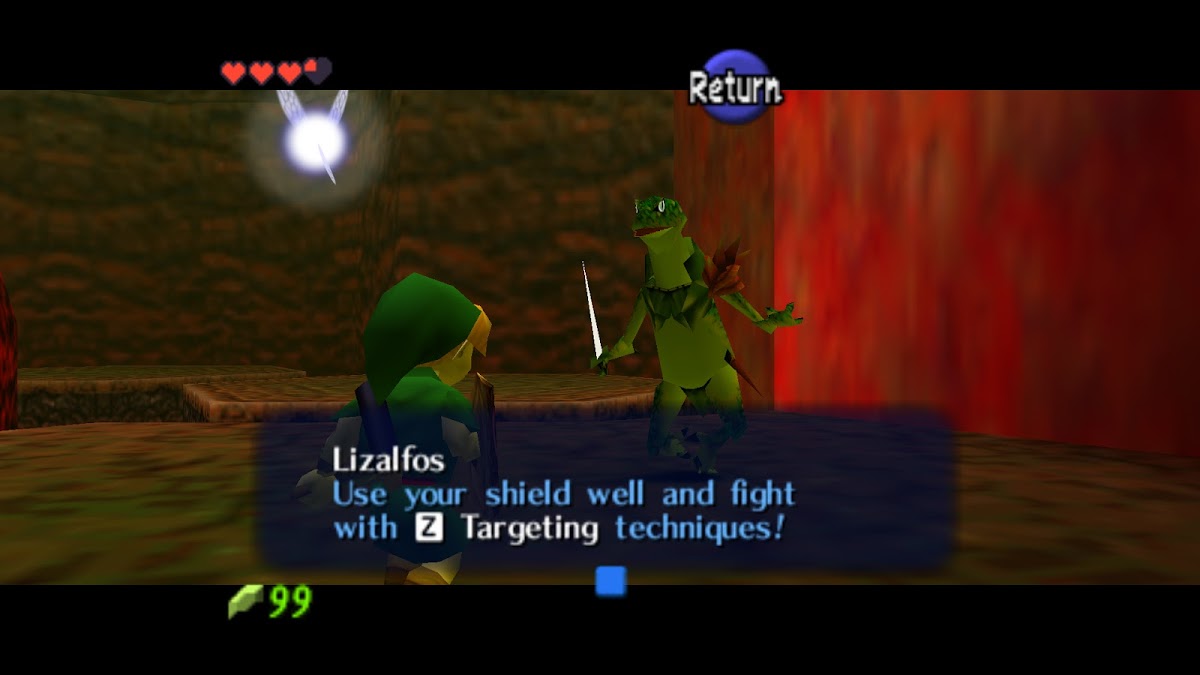 Hey guys! I'm Lizalfos! Can't tell if I'm supposed to look menacing or goofy, so I landed somewhere in between!

Next time, I promise, we're out of the Lumber Mill!
(Reference no one is going to getTM)