I'm well good and over with this dungeon now so let's bang our way outta here in style.

We got a riddle last time and all we have to do is solve it: 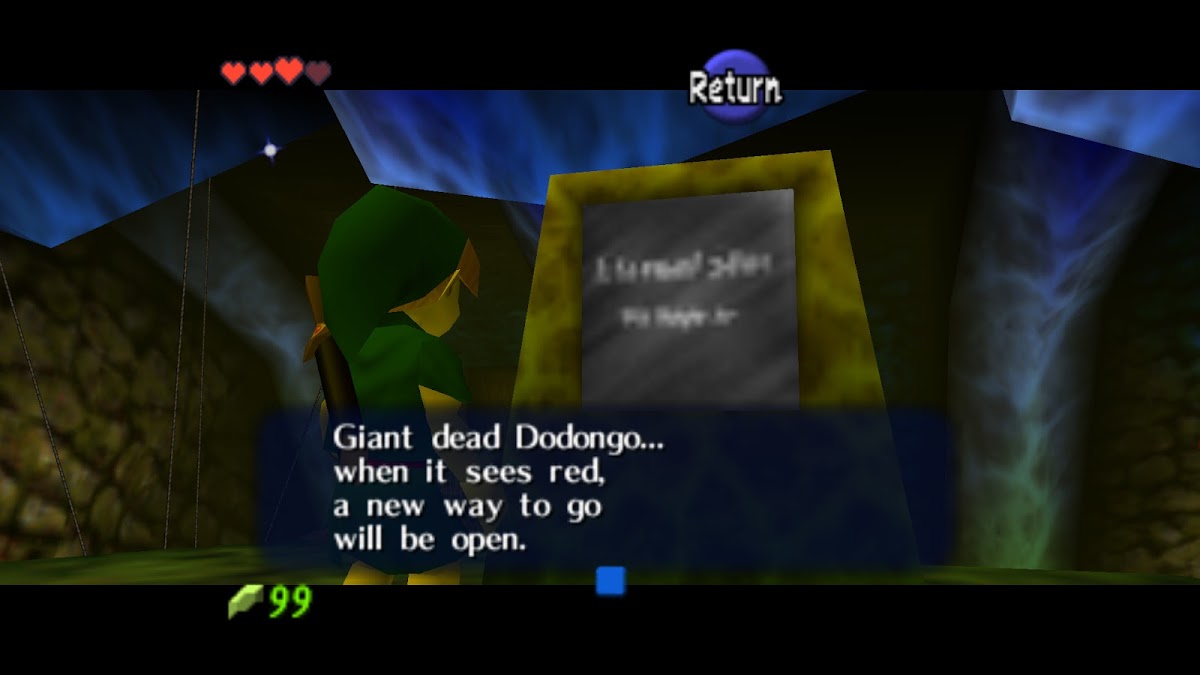 It's obviously talking about that big skeleton in the main room (see header from part 7 or look just a little further down if you dunno what I'm talking about), but how I make it see red I'm not certain of.
So while I think about that I scrape through the dungeon to open those last few rooms I weren't able to open before now, but now, with Portable Bombs, I can do Anything.
Nothing plot-critical, but I do find a few niceties. 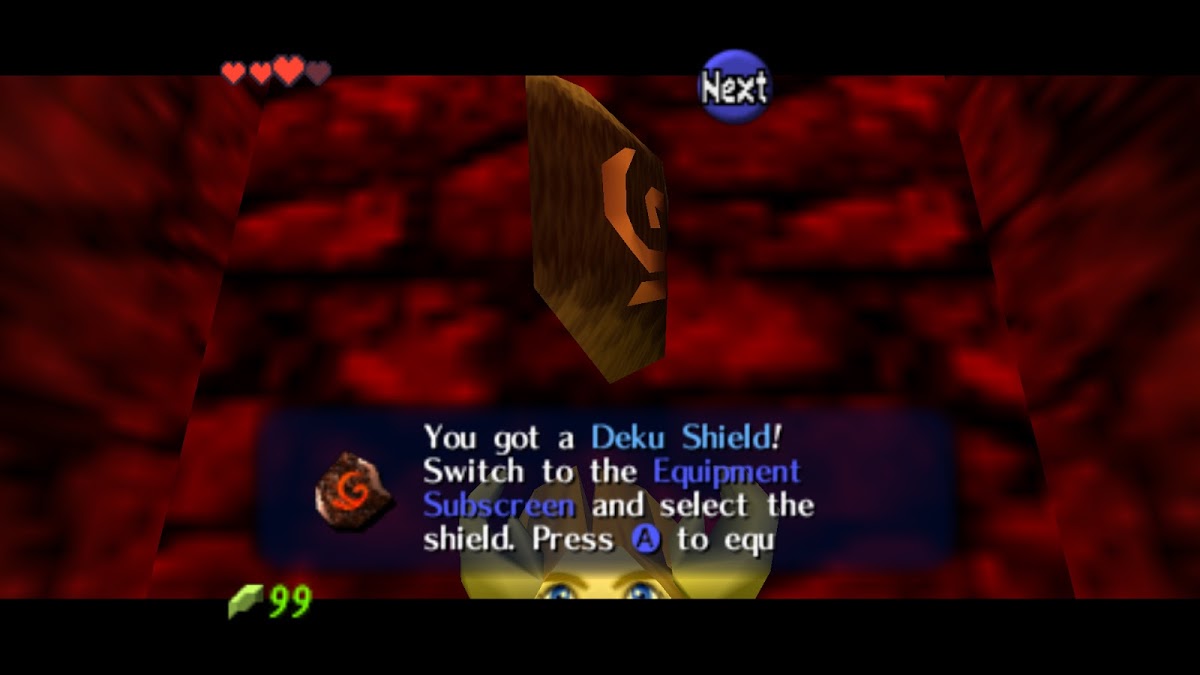 Look what was in there! Missed ya, shield.

I lost that shield again like three rooms later because apparently, firebats destroy the shield! Who knew!
And I stumbled a bit more around the dungeon which I'm going to lightly skip over before I discovered the solution:
Atop the skeleton is a bridge with two holes, and you can neatly drop down bombs down into the eyes from them. 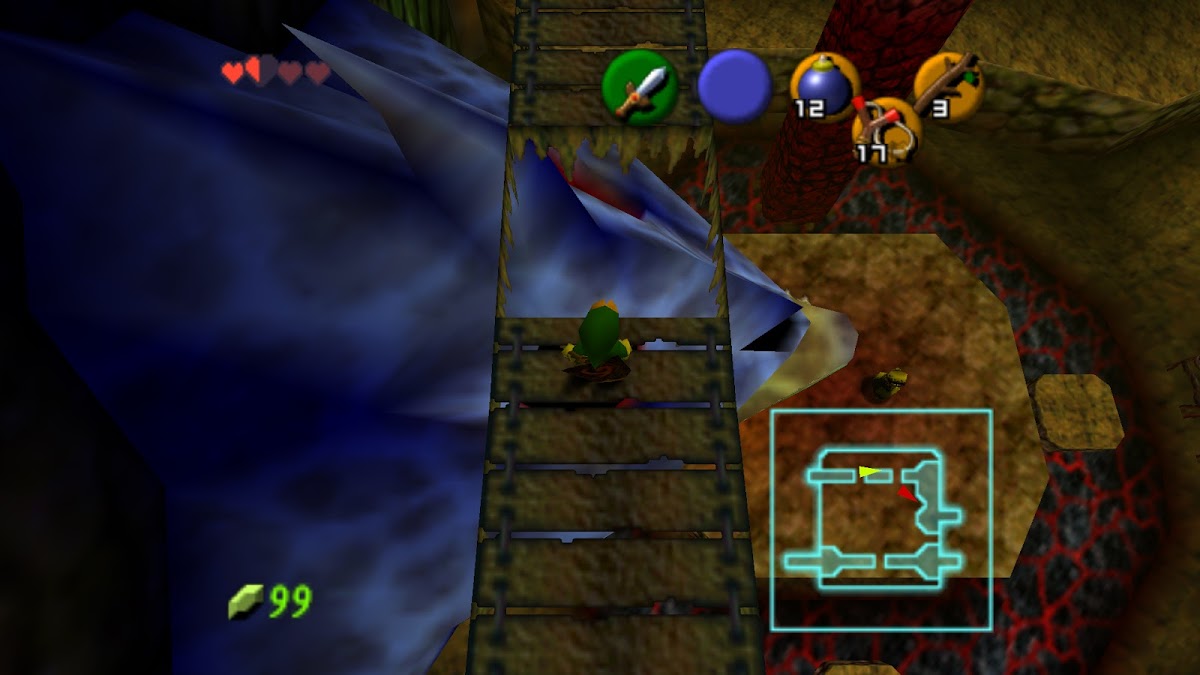 Remember, like we did to get into this dungeon?
Well done, game.That is pretty neat. 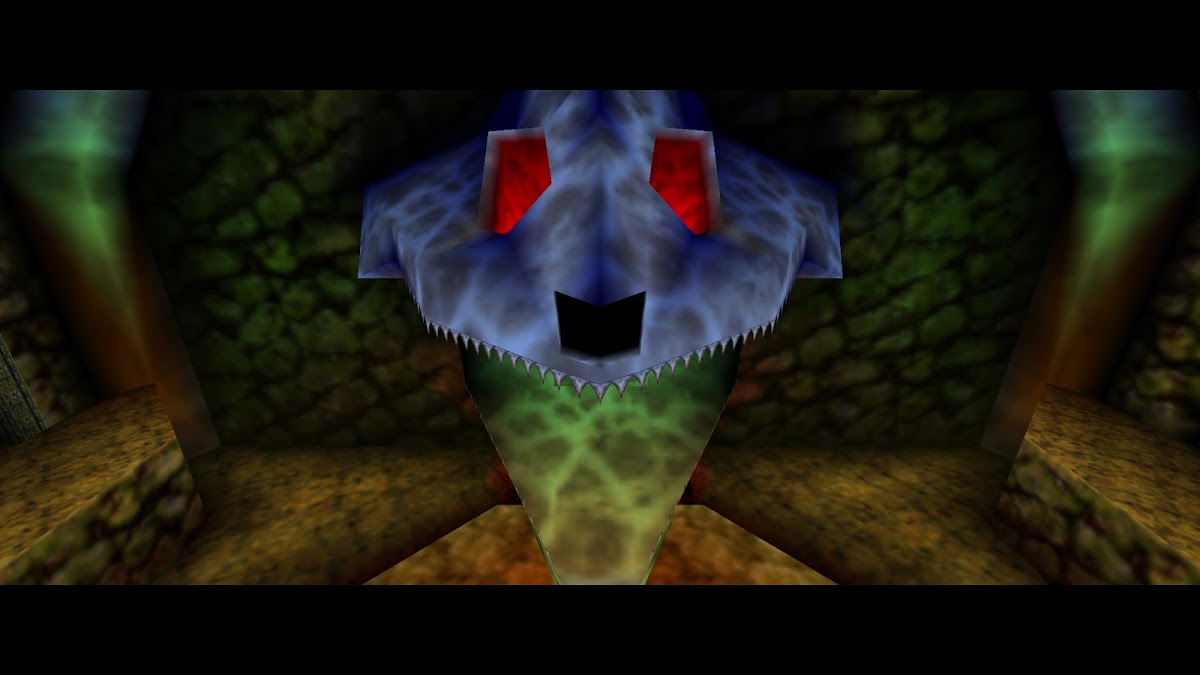 Inside the Dodongo is a small room with a hole in the middle and a locked door. This is obviously the boss door because the minimap tells me it is, but I can't go that way so I head the other one, and find a box puzzle. 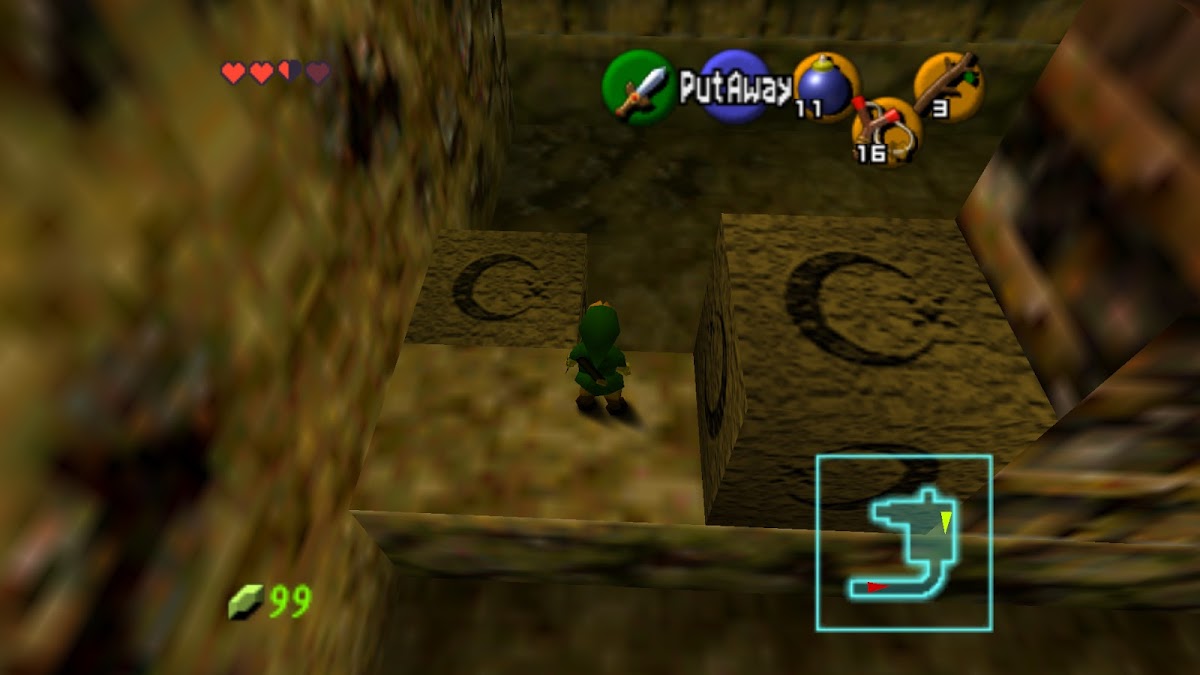 Truly, a problem for "The Hero of Ages". (Did I make that up? That's a name Link has, right? Or is that from somewhere else?)

And you know what time it is? 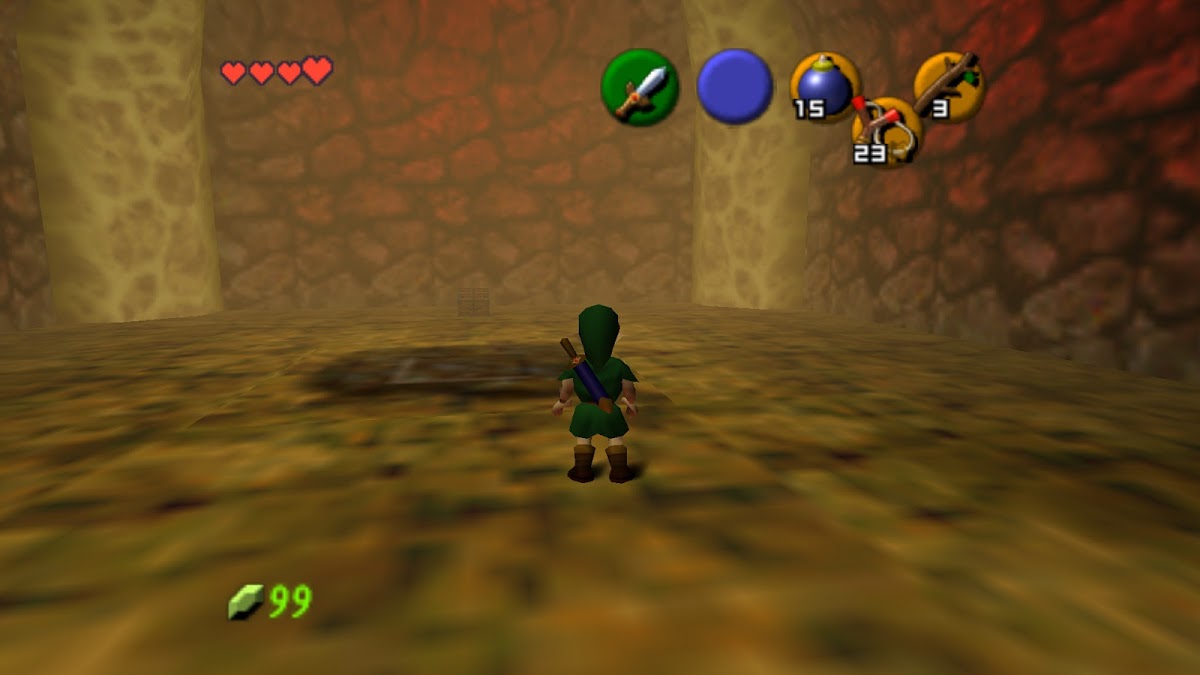 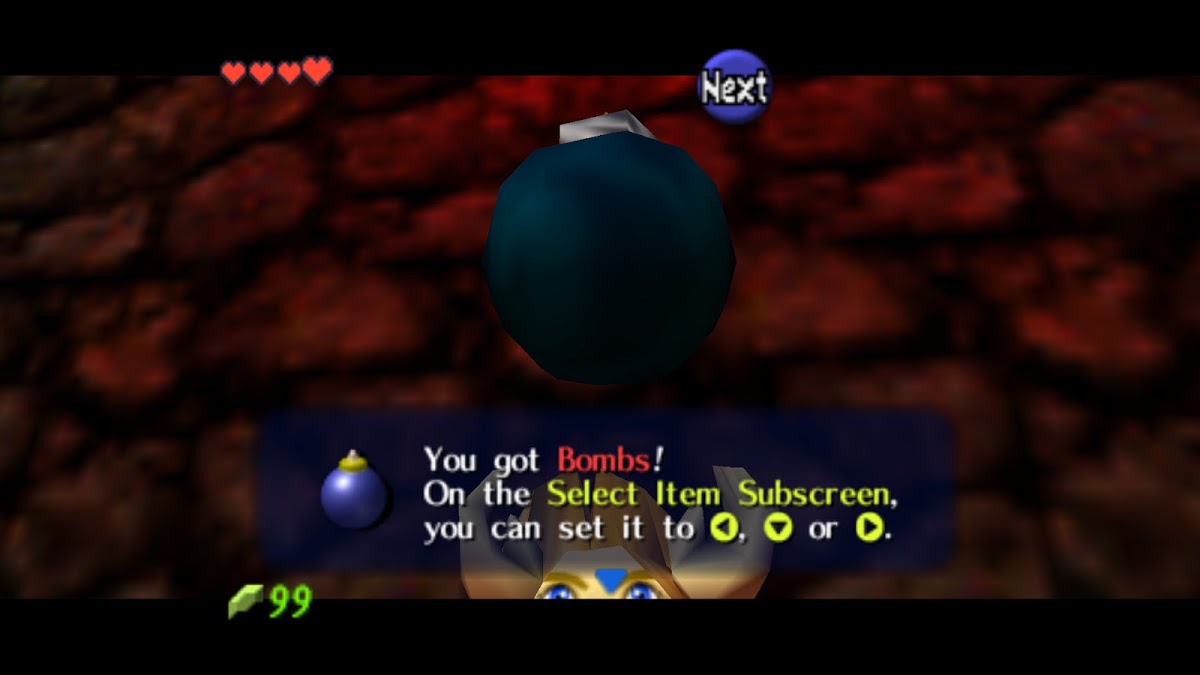 Oh, it wasn't. There were just bombs in the chest. No foul play. At all?

What if I told you that weird smudge on the ground wasn't a shadow of a big thing in the ceiling, but rather a mark for a weak spot in the ground where I can put a bomb to make a hole!
...Yeah, I didn't believe it either. 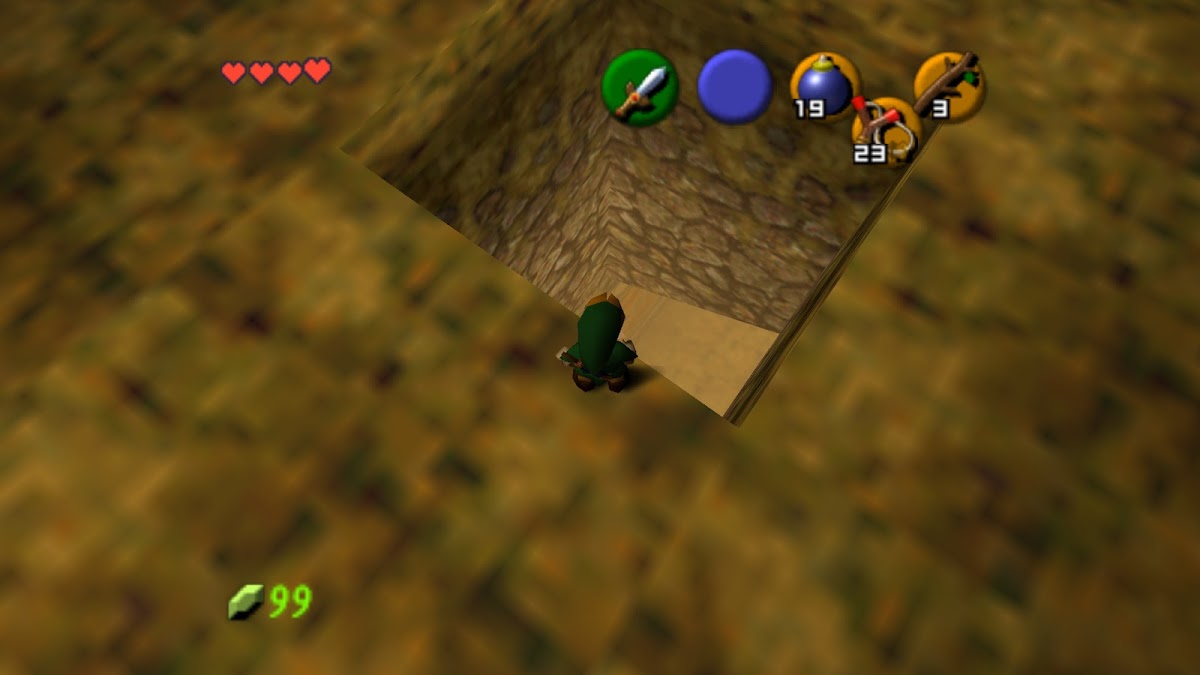 But there's the hole to prove it.
Sometimes, the graphics aren't doing this game any favours.
Also, what's with this game's obsession with having me jump down holes to get to the boss? It's 2 for 2 now. I'll keep count.

Time to say hello to whoever's in the hole! What are we guessing, Giant Worm? Giant Onix? 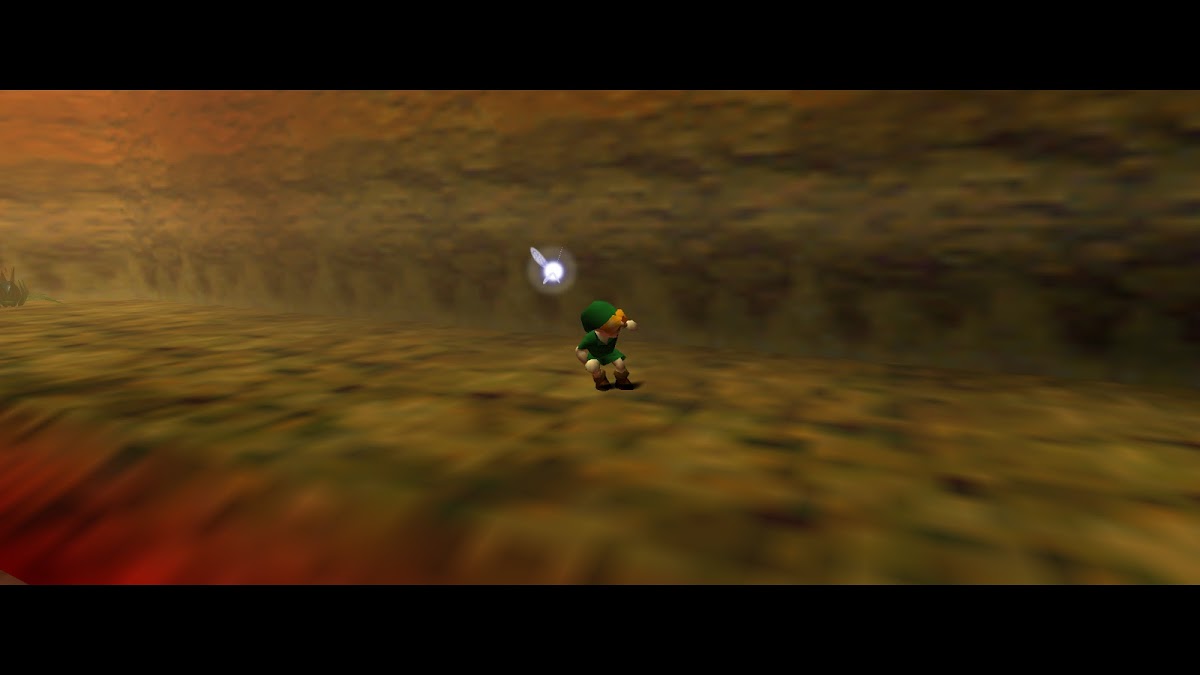 Wooaaahh there's something down here! 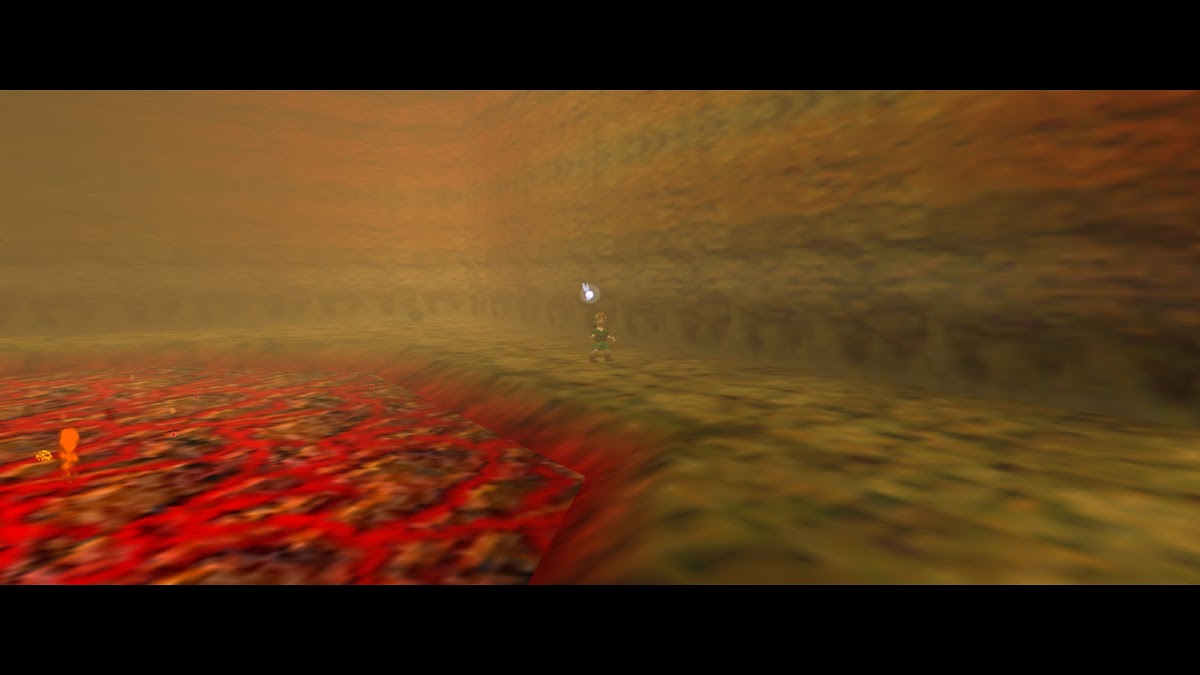 Link is AMAZED at this empty room!! IT'S SO ROOM-Y! I COULD-- 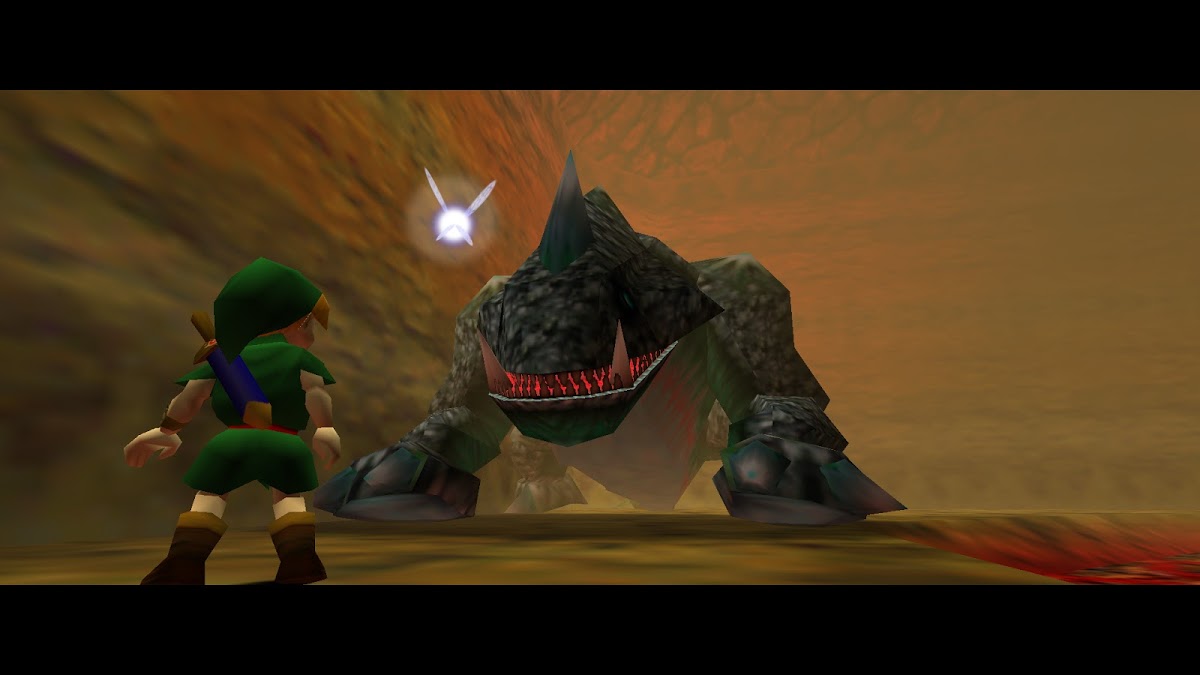 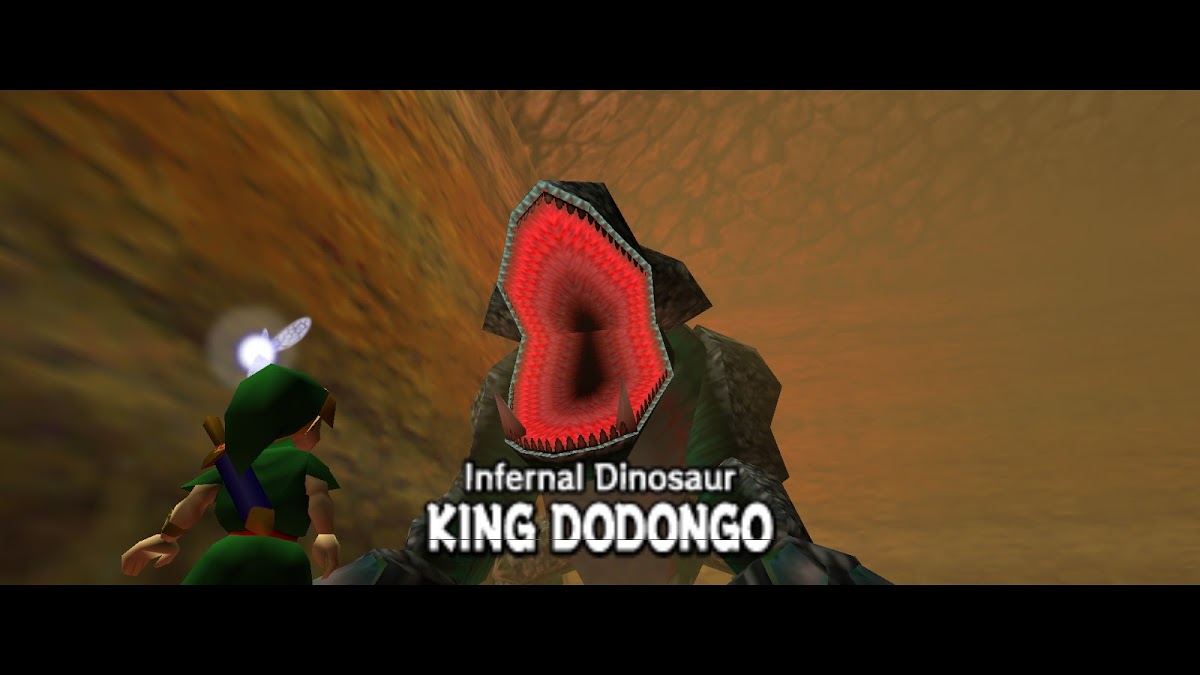 Let's add Regicide to my list of crimes, why don't we!

Like any good old-school boss fight, we need to discover its mechanic and then do that 3 times.

This guy walks around a circle around this big lava-pit in the middle and does one of two things when he sees me: Opens his mouth to spit fire or rolls up in a ball and tries to hit me.
He always goes clockwise. Which leads to a lot of situations like this: 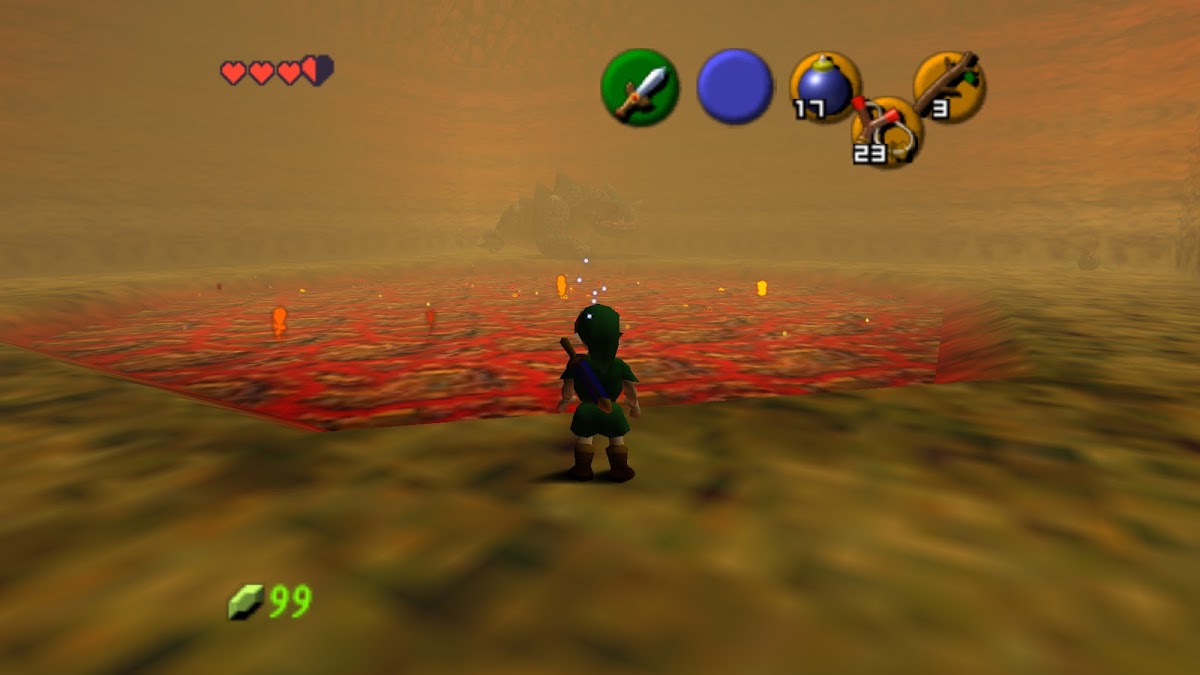 What ya doin over there? Thought we were supposed to fight? 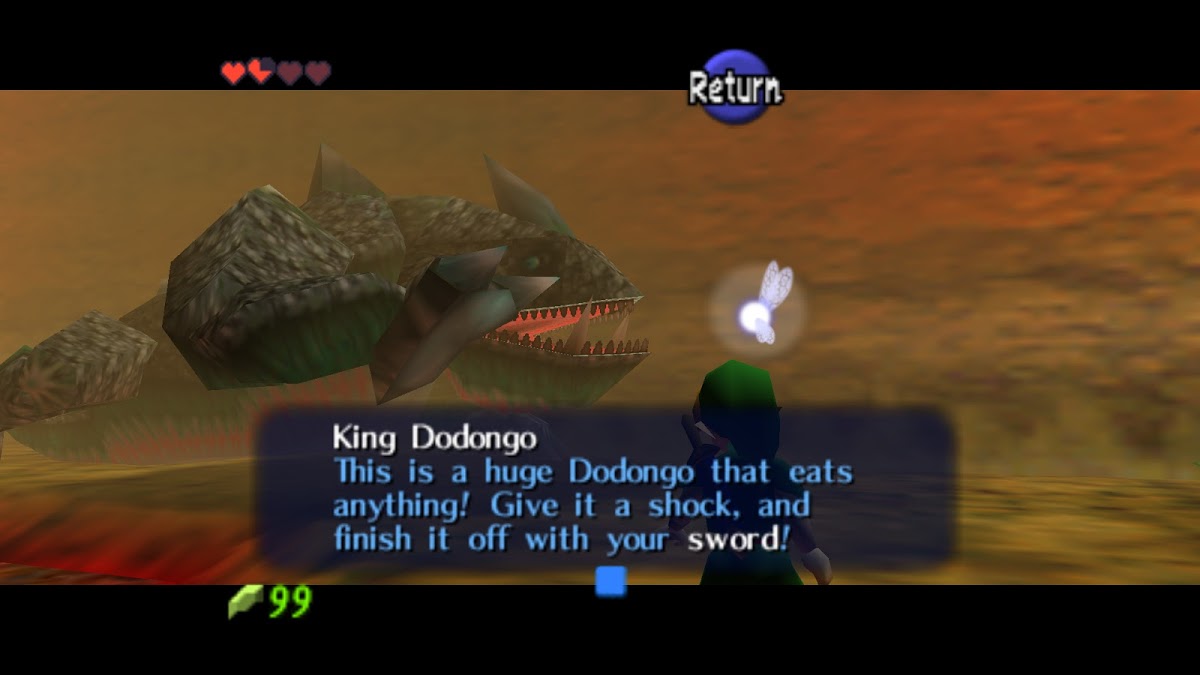 Give it a shock you say?

Well, we know which item I have to use already because the game just bloody gave 'em to me: The Bombs.
And guess where we throw them?
The big red spot.
Which is the mouth. When he has it open. Check and check.


I throw one in and hit him with my sword and he flares up and rolls in rage a bit, and I do that twice, then three times, then ONE MORE TIME.

What is this blasphemy. Who approved of this?

Ah well, Dino is dead. Let's throw our hands up in memory of King Dodongo. He was a good'un. 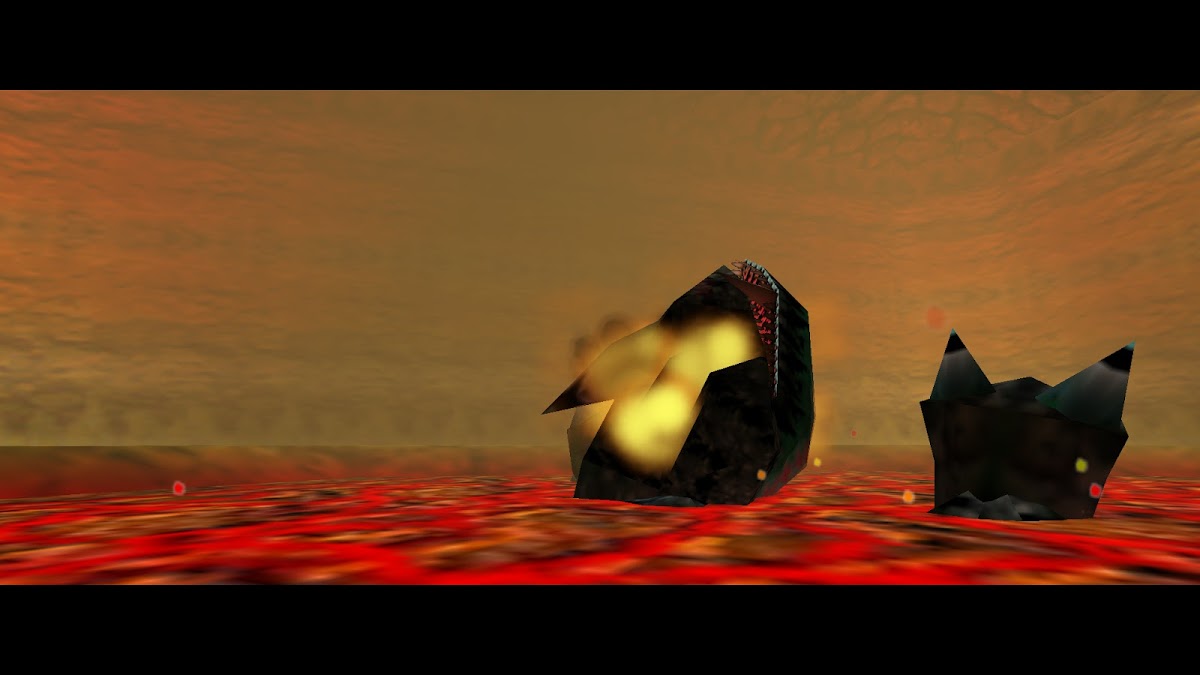 Throwin' devil-horns until the very end.
King Dodongo died fighting for what he believed in: The right for dinosaurs to listen to heavy metal.
I'm sorry man: The Gorons just don't like heavy metal. They like forest fairy music. No hard feelings, okay?
Here's a tune to make you feel better.

And now let's go out the blue magical light and get out! 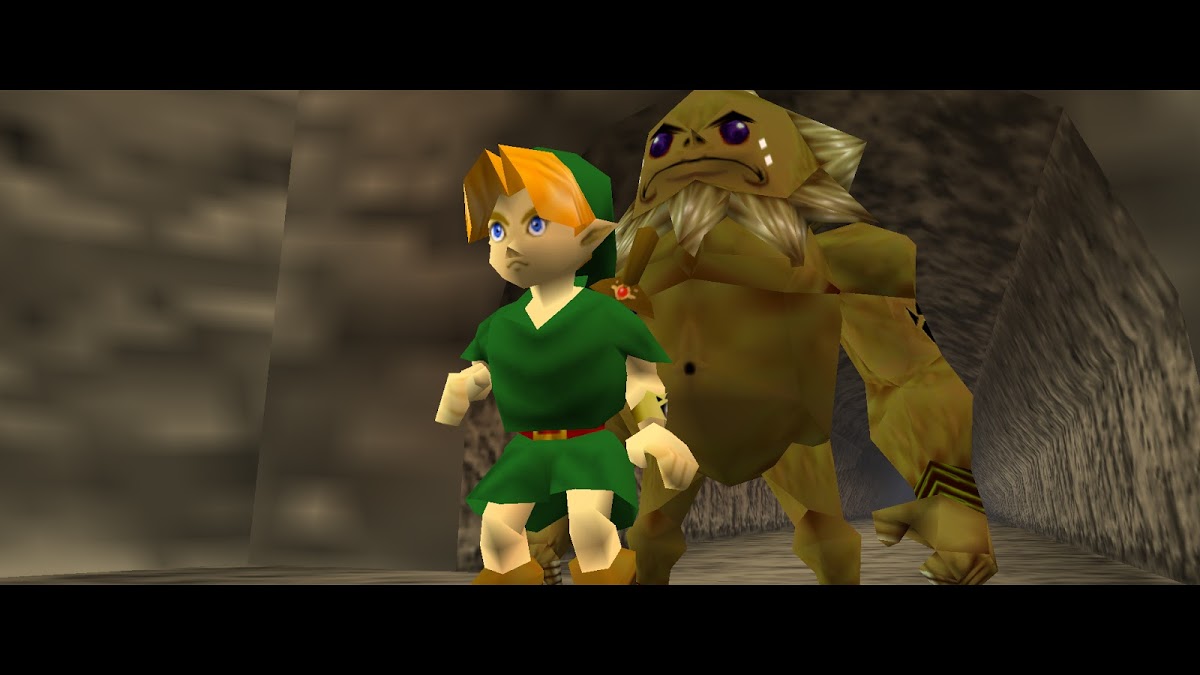 And Voila, we're out of the Dodong--OMG WHAT ARE YOU DOING BEHIND ME

King Dodo--uh, Goron just appears behind me as I exit the dungeon and begins talking to be before I get a say in the matter.

He's happy I cleared the dungeon because now they can eat again (of course), and talks a bit more obvious talk about how that "Gerudo thief" "Ganondorf" sealed it up and was all mean about it but then he says this: 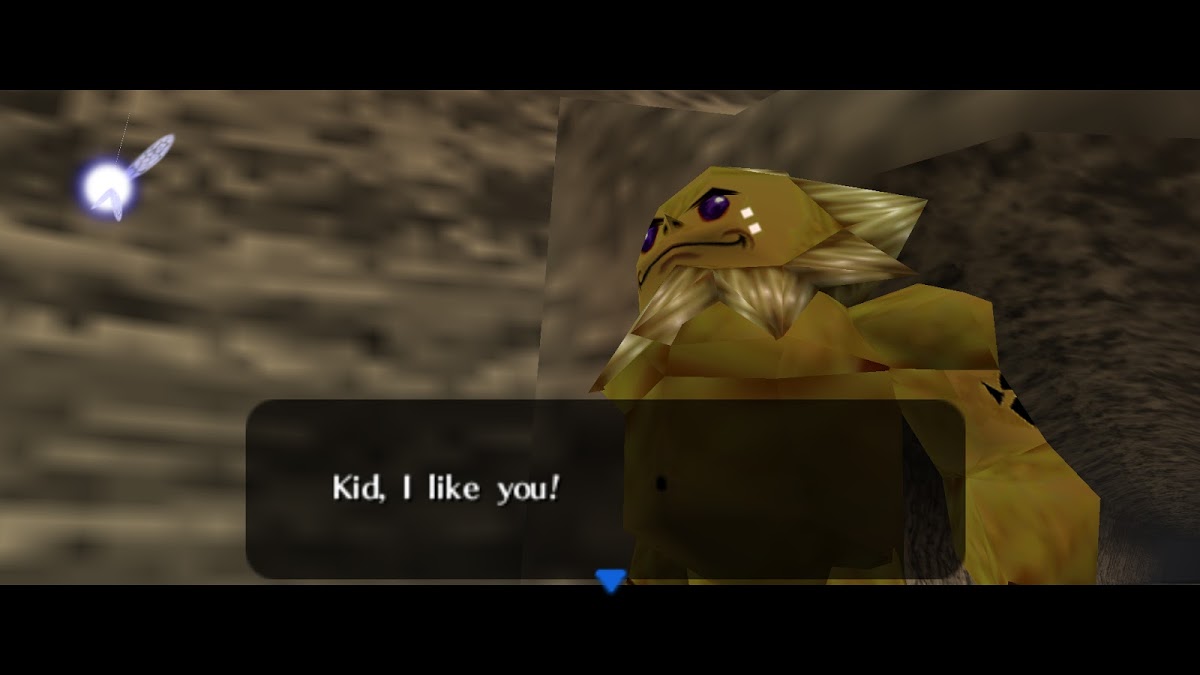 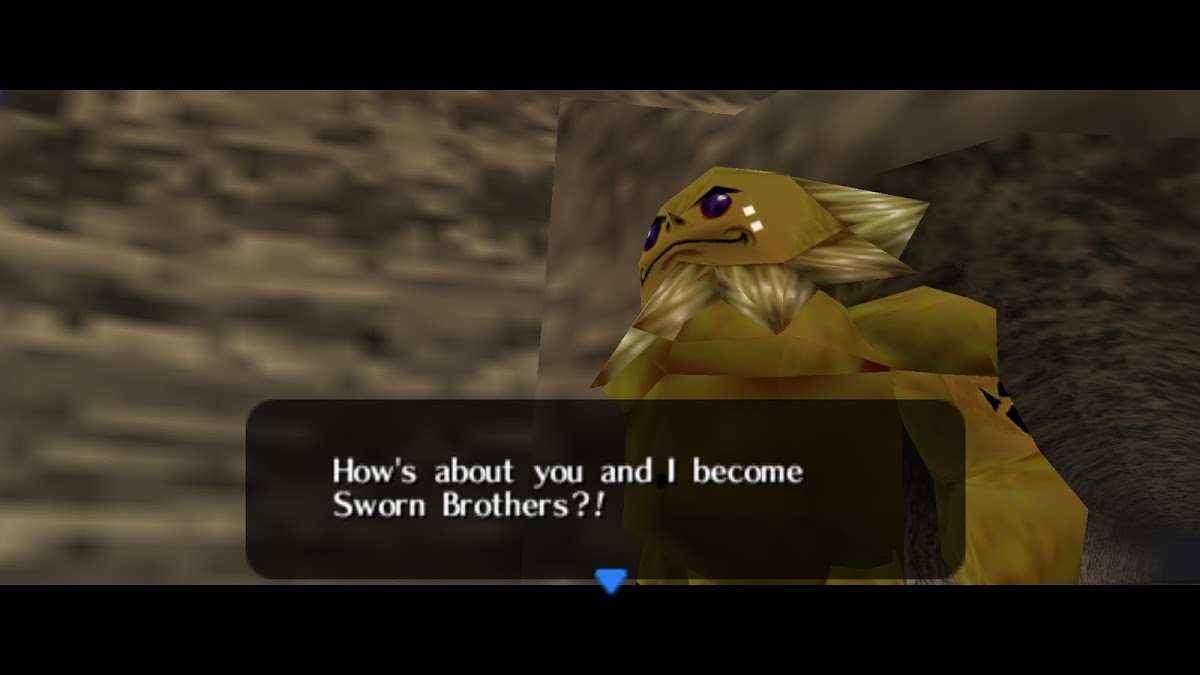 Sure thing bud! I got music, you got dance, what more we need? I was gettin' tired of this Hero business anyways.

So we initiate the Sworn Brother Ritual: 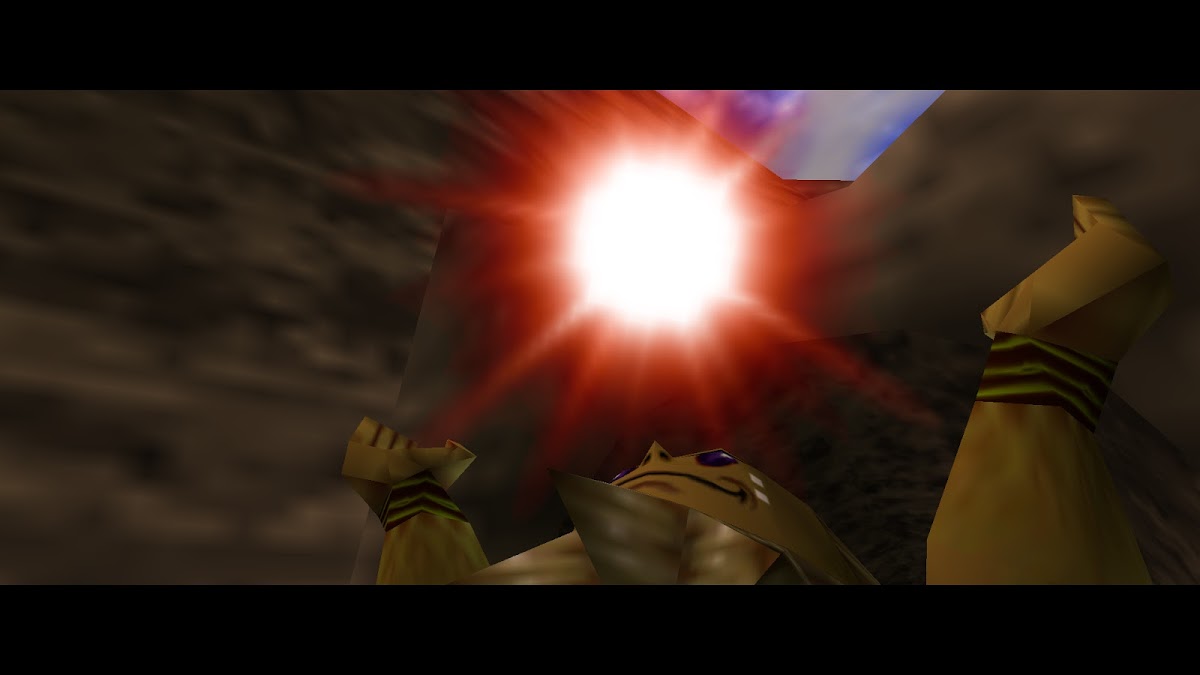 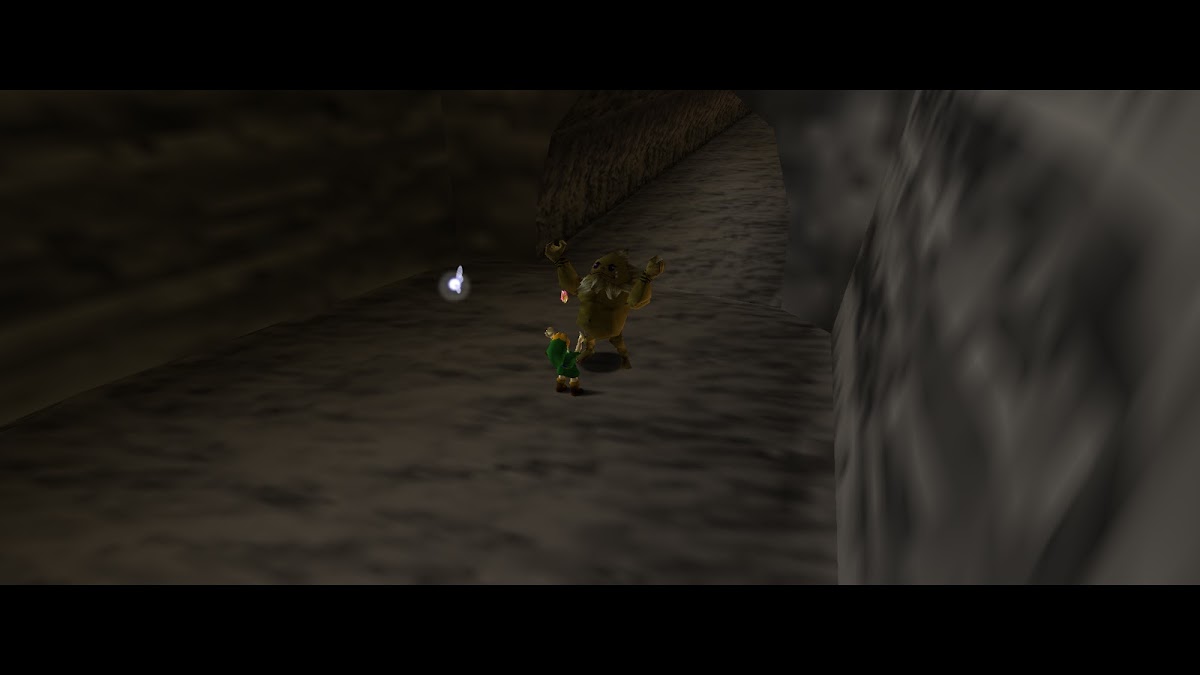 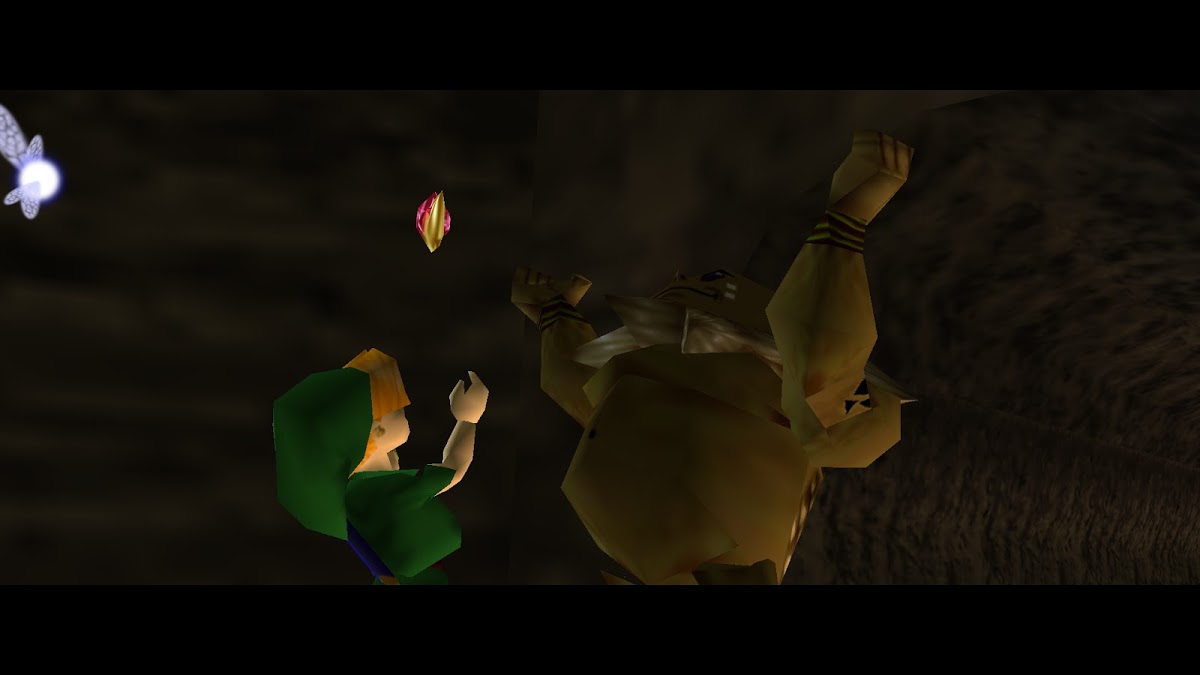 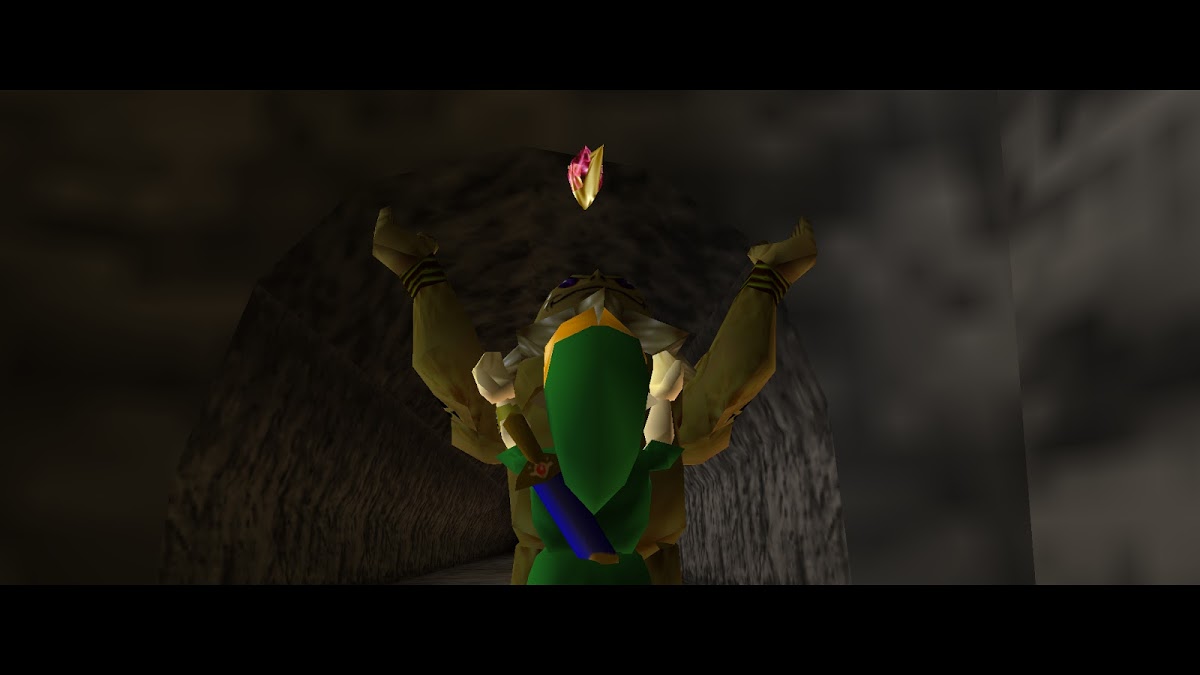 And I get a ruby! 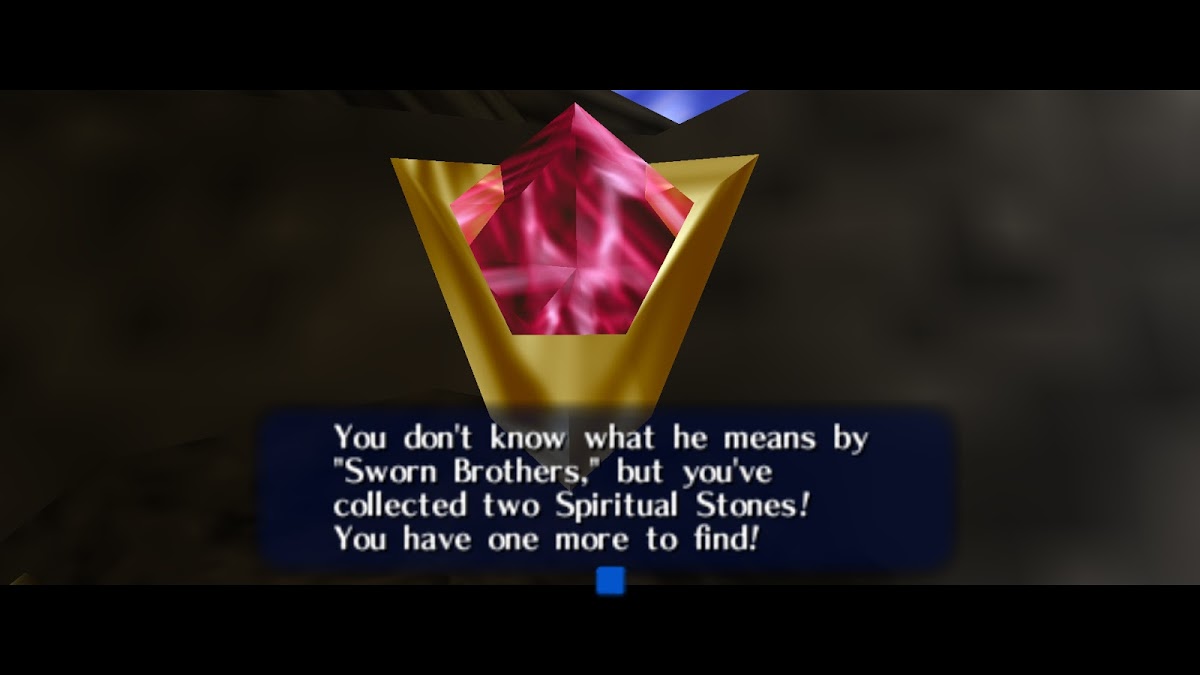 Oh I know exactly what he means, game. I know every inch of it.

His parting words is that I should go see the "Great Fairy" atop Death Mountain, so now we know what'll happen next time!

And I'll end on this image of a Goron Konga Line 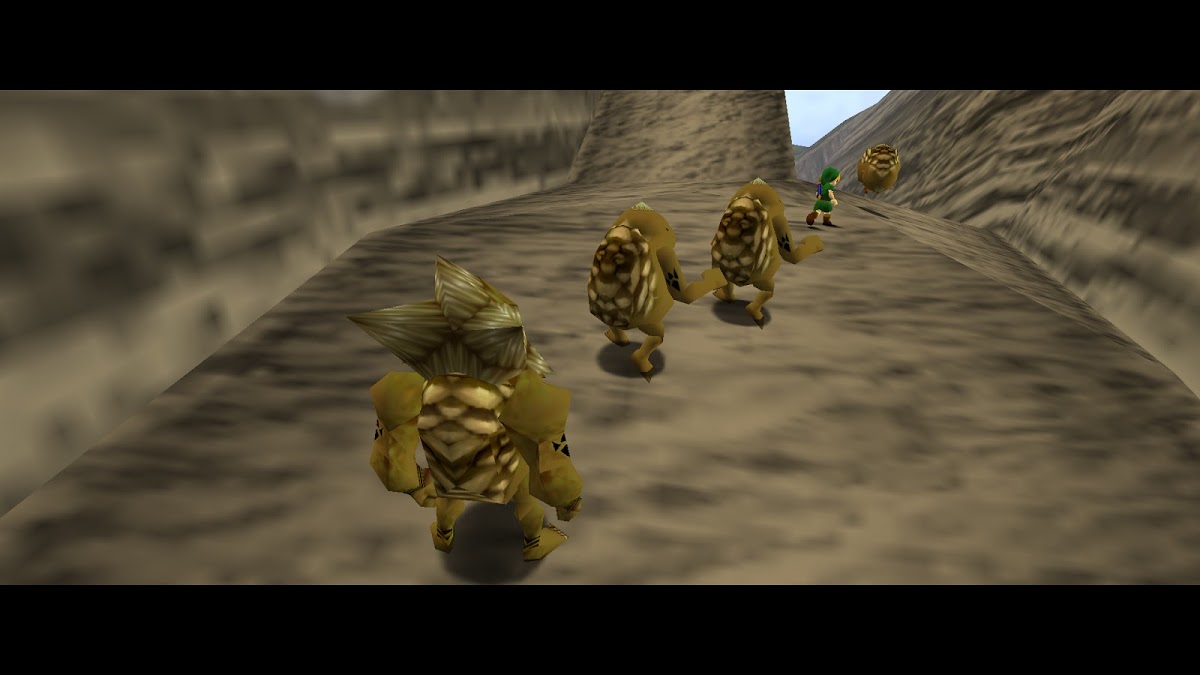 I know that's not actually what's happening here, but that's sure what it looks like, so I'm sticking to it.

Oh, and PSA, I'll probably have to take next week off since I'm in Rome (apparently!), so see you in two weeks, Great Fairy! And you!