Rise of the Tomb Raider was on sale on Steam! And I wanted to play it anyway.


All right, I played it for a couple of hours before this, so quick recap:

Lara Croft wants to find McGuffin. Bad shadow organization wants to find it too. We’re now in Siberia, in an old Soviet Work Camp to try to find it. (It's not actually in the Soviet Camp, it's just beside the ancient lost city we're all trying to find.)
I need to infiltrate an old Gulag where they’re keeping someone prisoner who might know where it is.
Oh, also: The shadow organization is called Trinity. No, Trinity. Clooser... Whatever. Just Trinity.
Ok.
That’s more or less it.
(Sorry, that was sort of a gross reduction, but time and all that.) 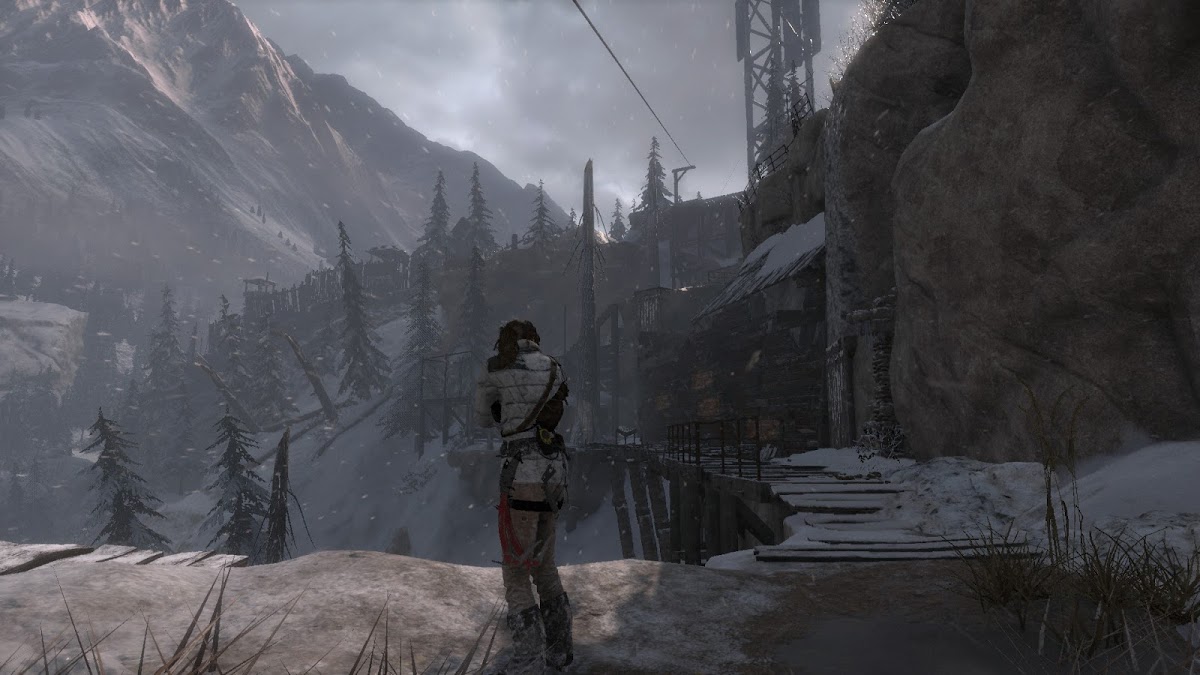 Siberia's cold. If you didn't know.

I climb up the mountain to a small workcamp, where three Trinity guys are stationed. I try to sneak behind them, but on my way over to the wall I think I need to climb up, one of them sees me. I scramble down and pull up my bow and fight until they’re dead.
I approach the wall again and realize I can’t climb up it anyway because I need a tool I don’t have. I could have just gone the other way and they wouldn’t have seen me. Whoops.

I climb up the tower and grab a zip-line into the gulag.

We hear Konstantin’s voice. Konstantin is the immediate bad guy, the one constantly at your neck and commanding the forces of Trinity. There might be something else going on because we hear a voice he’s talking to, though, and then he doesn’t sound like he’s in charge… 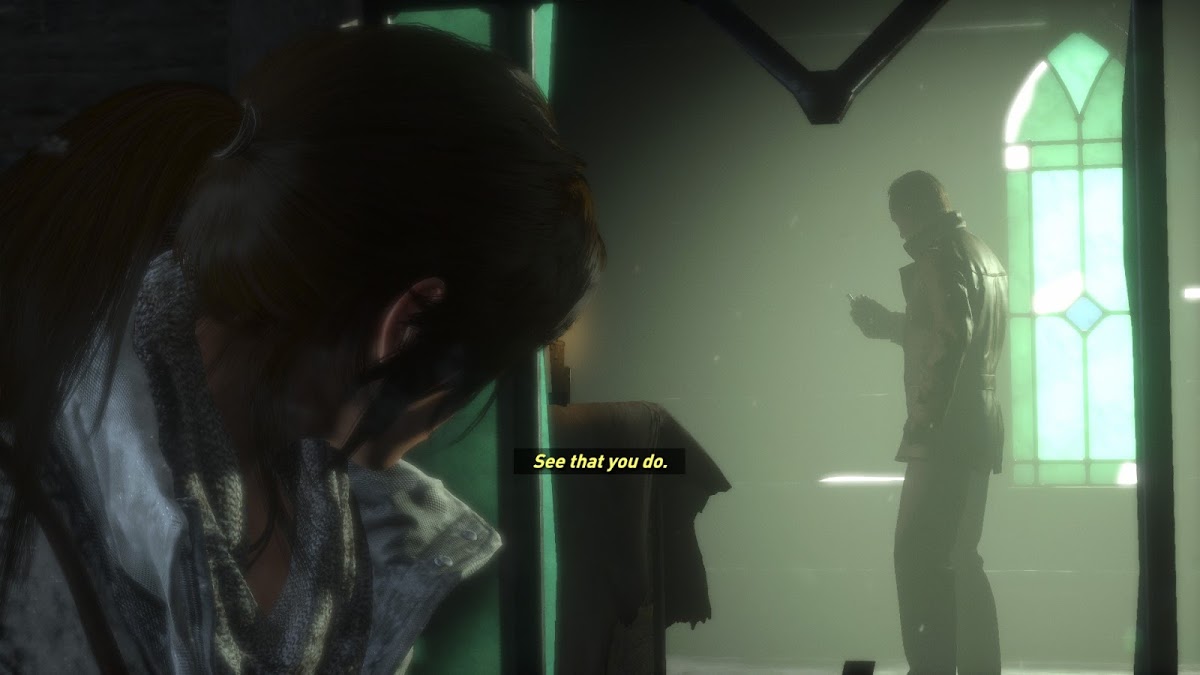 Lara tries to sneak closer but a guy spots me, and then another, hits, she falls, screen turns black.

Lara Croft is trapped. Strapped to a chair in a small, black room.

Lara sits down and someone talks to her. She glances up and spots another person in the cell beside through a small hole in the wall.
Before I even notice how, she conjures a lockpick from something and unlocks her handcuffs, and gives the control back to me. 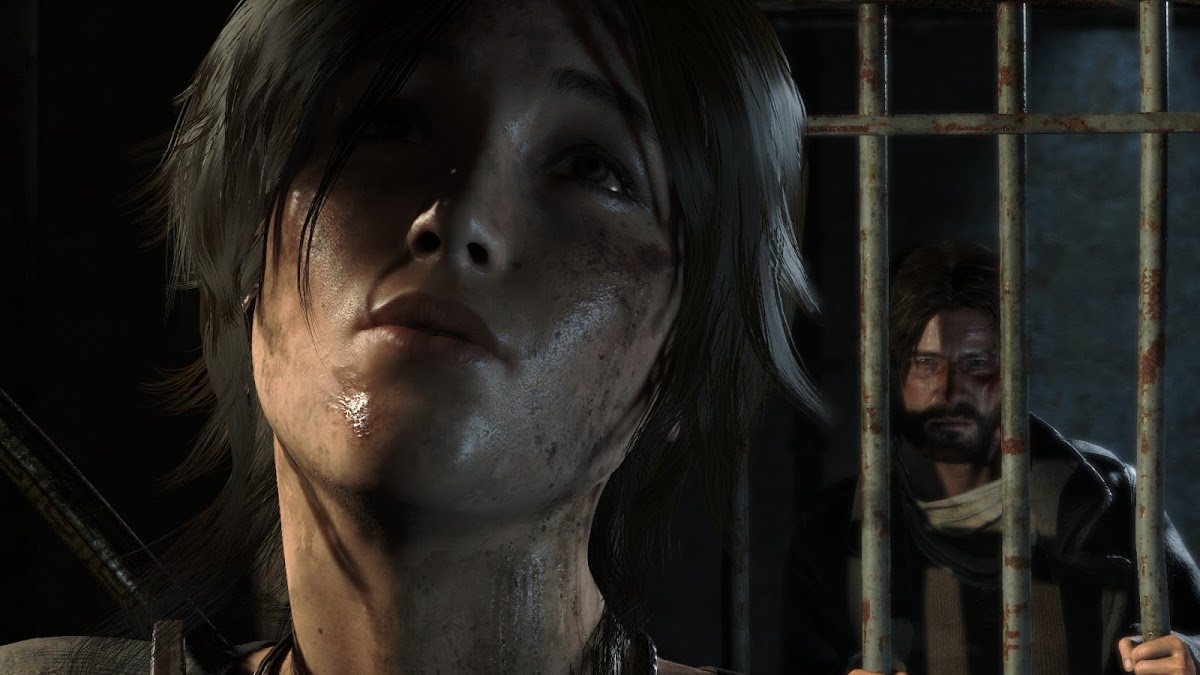 Those facial details, though.

The other guy continues to talk as I search around for a way to escape. A loose pipe, a rickety wall, broken down leading to another room beside. In there lies a bow and a rope. Time to rope arrow. Above the door is a loose piece of metal, I shoot up there and pull on the rope and voila, a small window frame to crawl through.

The guy calls to me.

Oh right. He asks if he can be let out. Makes sense. But Lara (cutscene again) is less certain. Not really in a trusting mood. Makes sense also, because [SPOILER].
They talk a bit more and he tells her he can help her find the McGuffin—ahem, the Divine Source. So she gives in and lets him out.

His name is Jacob. And the cutscene ends on this ominous frame of him: 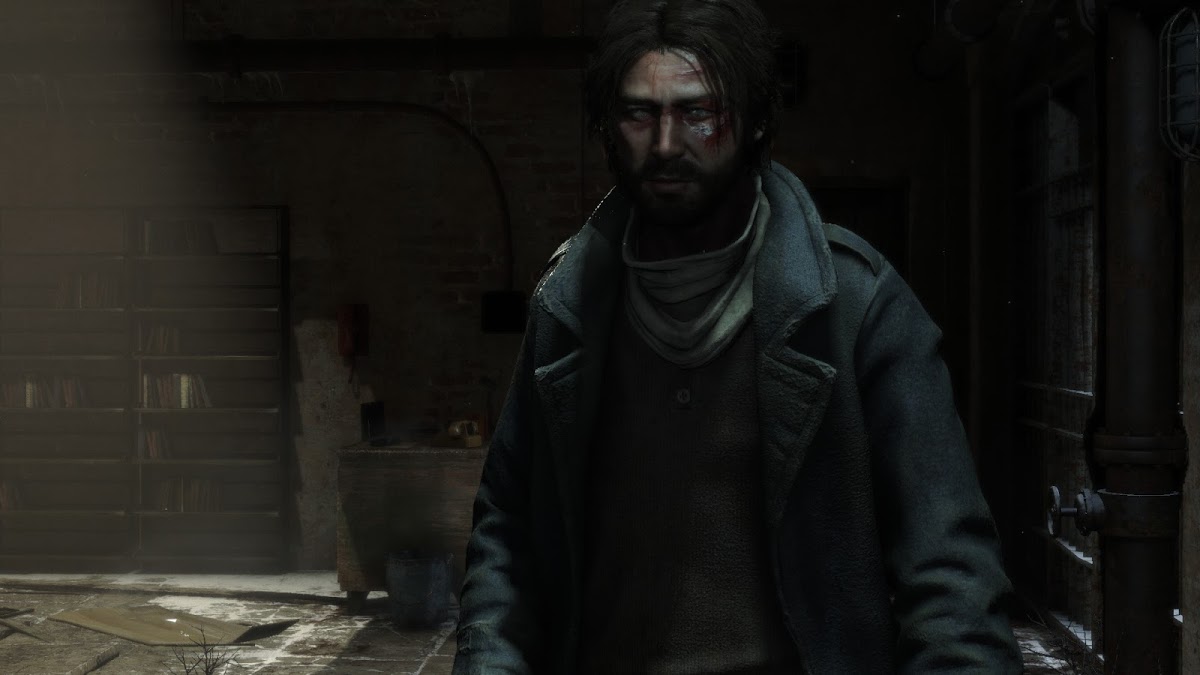 We walk a bit together and find an old history room, where there’s a projector showing slides of the old Soviet expedition in this region. They apparently found something ancient, but it’s unclear what.

We need to get to the old train station, Jacob says. All right. We climb up the roof of the current building and see a helicopter arriving with a container.

There’s a gate we need to open and Lara says she’ll take care of it.

Of course I will. No problem. Look at me, stealth master: 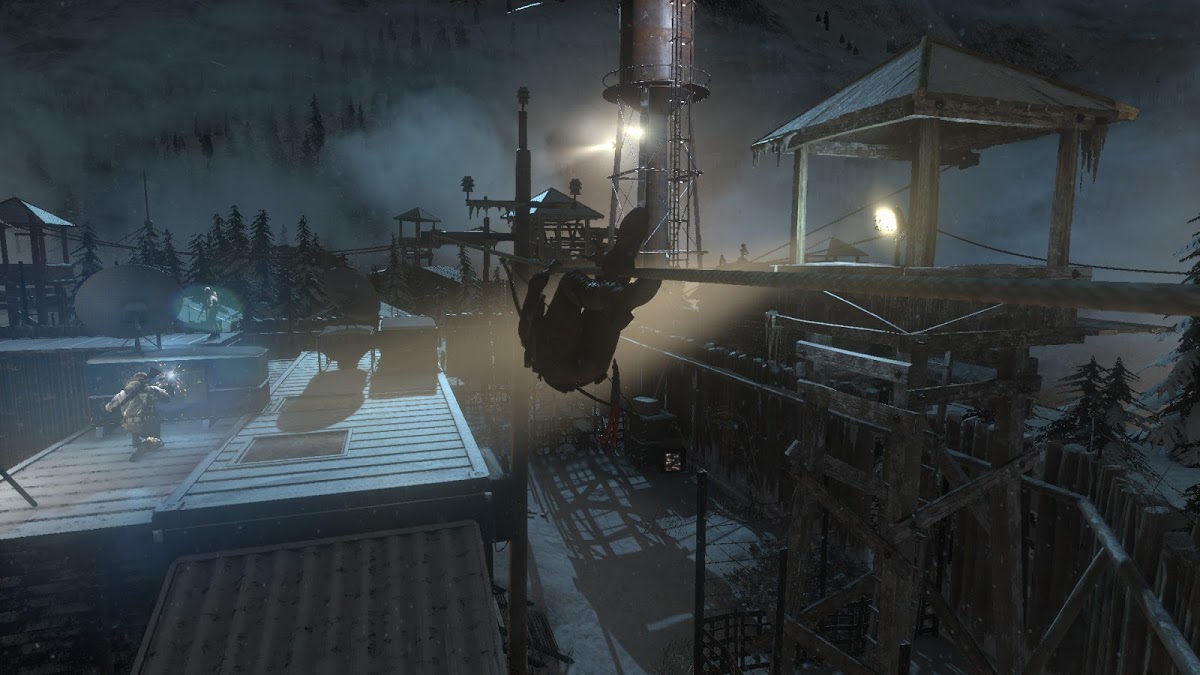 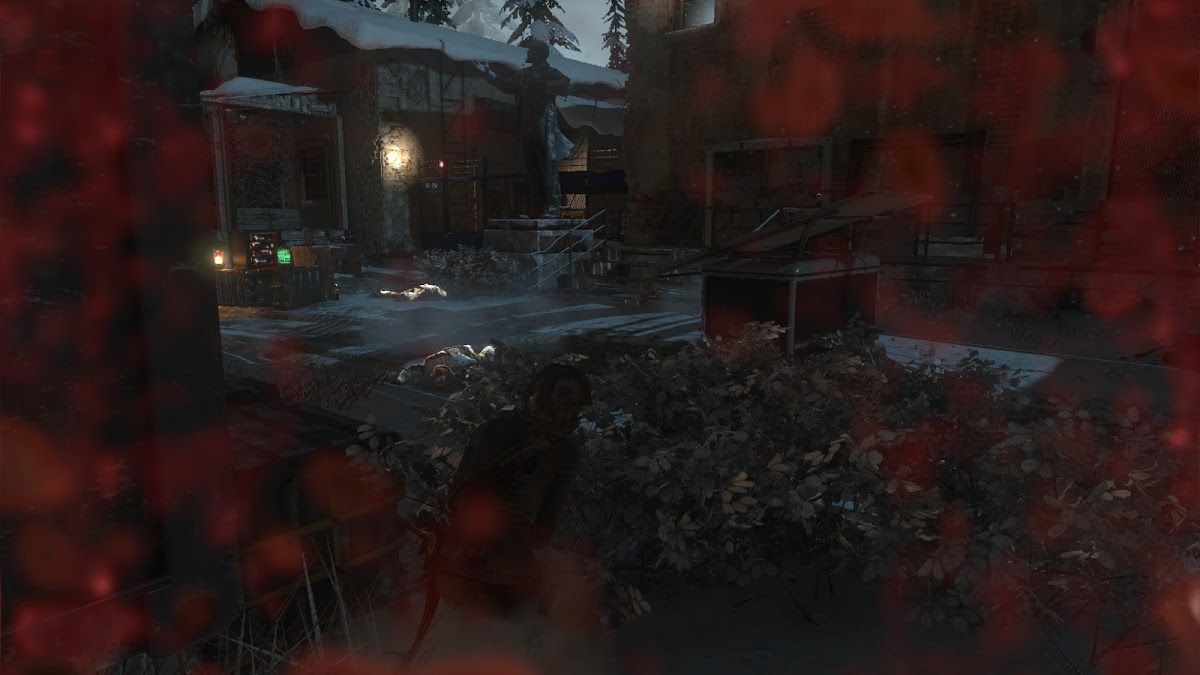 Fast forward a bit through some more “sneaking” and I wind up here: 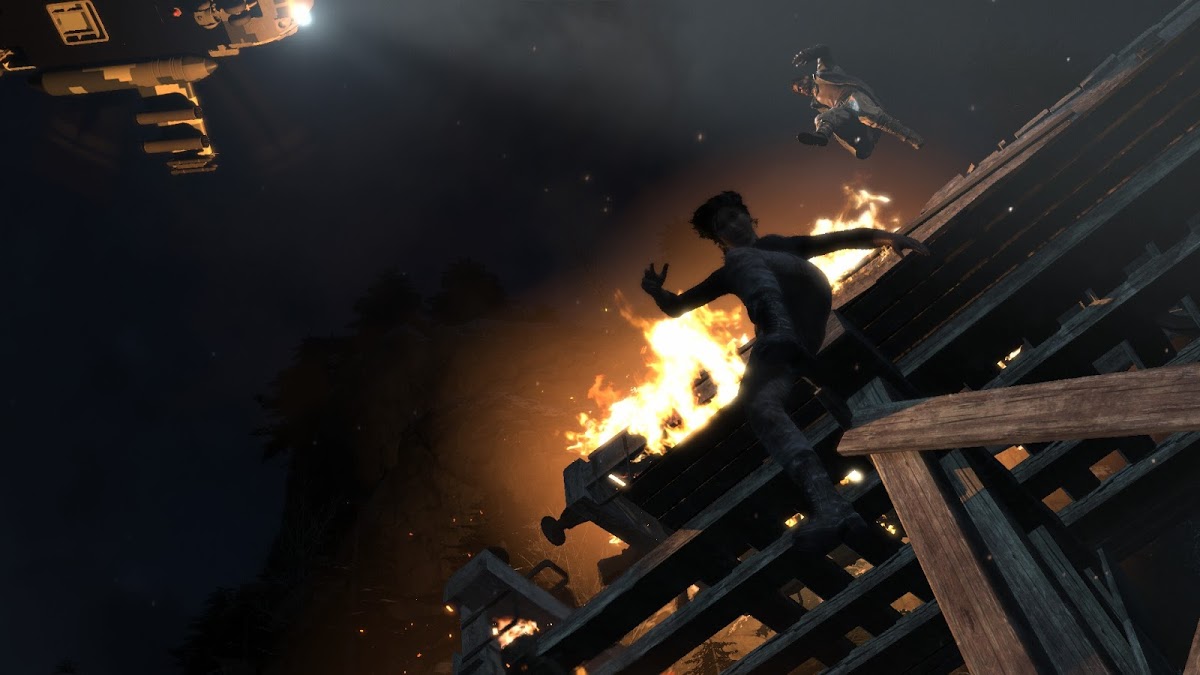 Actually, it was a bit of a pity this section was so action-y, because that’s less interesting to write about. The previous hour I played was nothing but straight up Tomb Raiding, and I’d have liked to squeeze a little of that in too. But oh well. Next time.

I’m still enjoying the game immensely. This had far better character building and story-work than most of the previous sections (which I can't really talk about without talking about [SPOILER].)

Also, to the people who have played this section: How elegantly did I just skirt around that spoiler, eh?