London was stolen by bats and brought underground in this strange, fantastic little game from Failbetter Games. With a tagline I’ve adored since it released in 2015 of “Lose your mind. Eat your crew. Die” you are aware pretty quick that this London is not your typical place. Even so, I've never gotten around to playing it, until now.

Sunless Sea is a game about sailing through the “Unterzee”, the vast sea (excuse me, zee) surrounding the city of Fallen London (of the titular web-based game “Fallen London”, also made by Failbetter).

I begin my journey by giving myself a past and an ambition. And thus the previous philosopher-turned-zee-captain “Flushbuckle” (don’t know where that name came from) is now on a journey to explore the Unterzee.
At first I begin by browsing through my Captain’s Advice book, since it would not be wise to be captaining without knowledge of how to do so, I think. And knowledge is found in books, as all philosophers know.
And so, having read this, and after exploring London and reading the newspaper for a bit, I set off into the unkown zee. 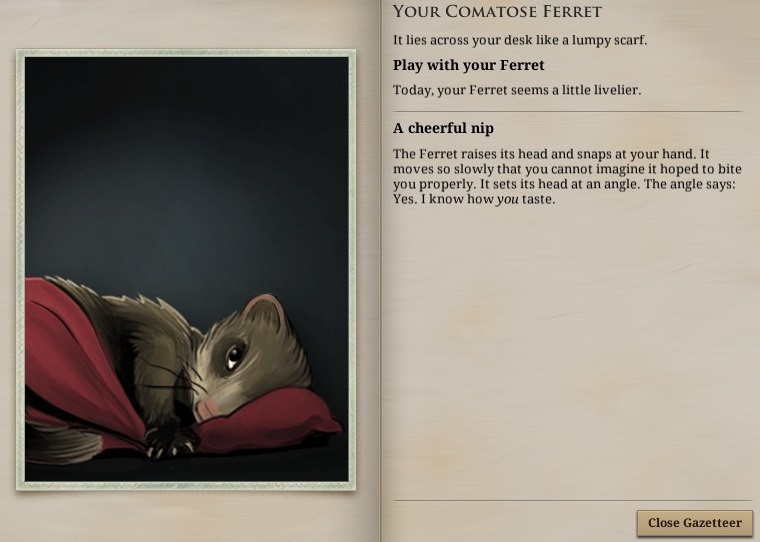 Shortly after, I plunge upon “Hunter’s Keep”, where I dock for a short rest. There, I find three sisters who seem to be in charge of the place. They each offer me lunch, but I can apparently only choose one to dine with. Decisions. I choose the first one.
I also notice a quick snippet about a beetle that has apparently invaded my ship’s (tiny) biscuit-storage, but nothing comes of it—other than my own worry.
With a full stomach and a happy crew, I sail further away, and realize I have a pet ferret. Look at the cute guy!

I venture northwards and stumble, after much sailing onto a small port known as “Stoddard’s Haven” in a place called “Frostfound”. It is cold up here, I see, and soon upon arrival a man rushes up to me and begs me to take him with me. I glance at him and quickly see he is a mechanic and would make a brilliant engineer upon by vessel, so I tag him along. 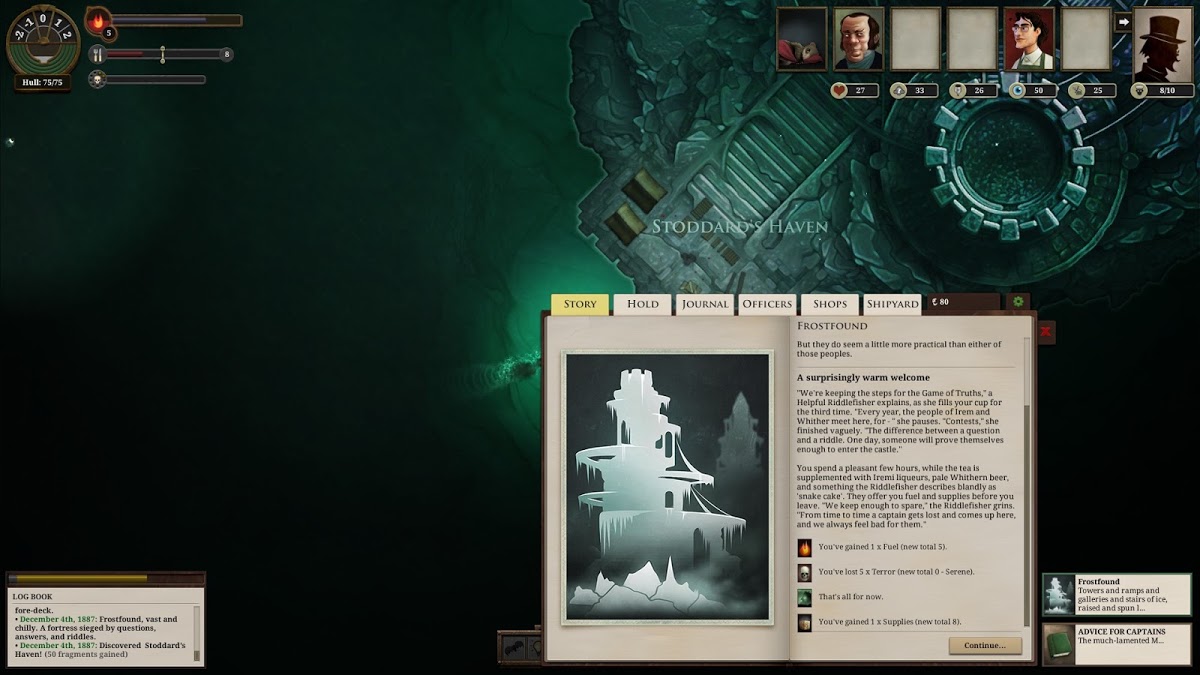 This one's mostly here because I love the concept of a "Riddlefisher". Such a good word!

I prepare to leave again but realize my fuel storage is quickly running dry. I have yet to find a place that sells fuel other than in London, so for safety’s sake, I point my ship back towards the Capital.

Upon arrival, a shady looking fellow comes up to me and presents a gift from an unnamed patron. I hesitate a bit, wary of a catch, but accept the generous offer of much fuel and supplies. Nothing else comes off it—for now.
Resting in London, I briefly visit the University and the tavern before I’m off to zee—
But wait, just before I’m about to leave, I notice a Tomb-colonist wanting passage to the northern town of Venderbight.
I have no idea where Venderbight is, I think, but sure, I can get you there, I say. He hops aboard and we are off to the zee. 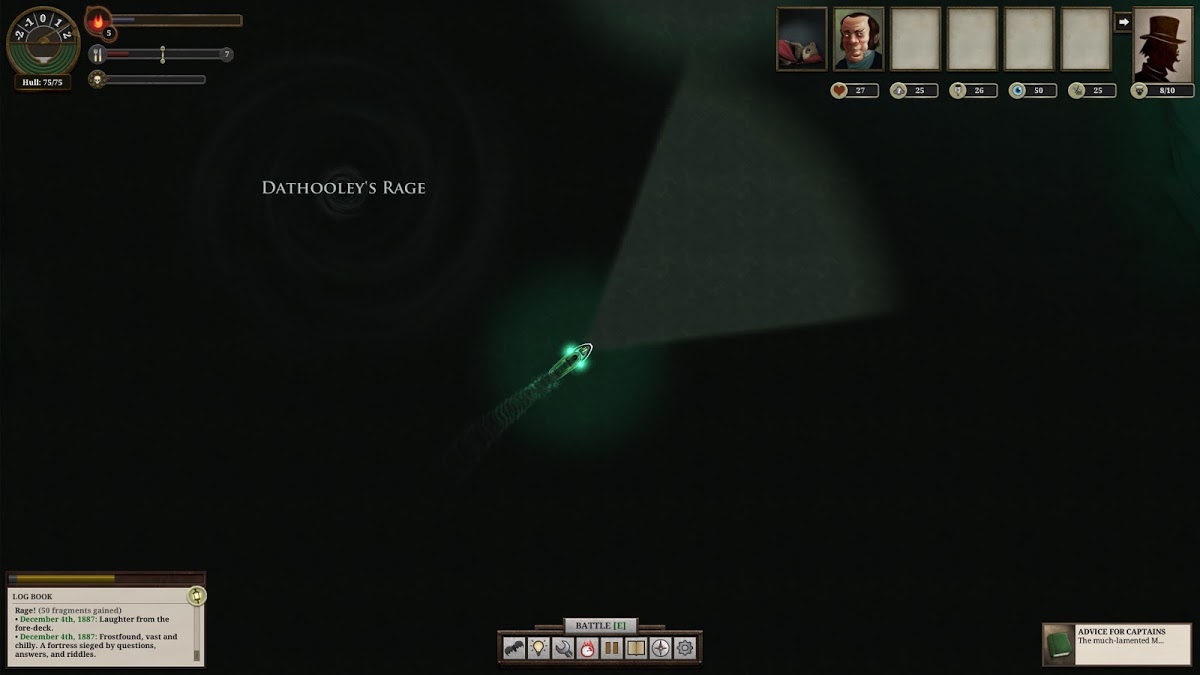 I thought it best to avoid that giant swirling maelstrom.

As I did before, I once again venture northward, hoping to stumble onto this city of Venderbight before my fuel storage runs out. But then I strike upon a large zee-creature, an “Auroral Megalops”, which, to be honest, looks like a giant crab.

I am assured by the game that I can indeed go into combat with this creature, and after a bit of fuddling and circling around the animal, I manage to take it down with only a little damage to my hull.
Approaching the corpse, I get the opportunity to dissect the thing or butcher it for food. I assume we have enough food for now, so I attempt to dissect it. Yet, as we pull it aboard, it springs unexpectedly into life again! A short fight ensues but after our victory, not much is left for scientific examination, so we have to toss the remnants into the zee. 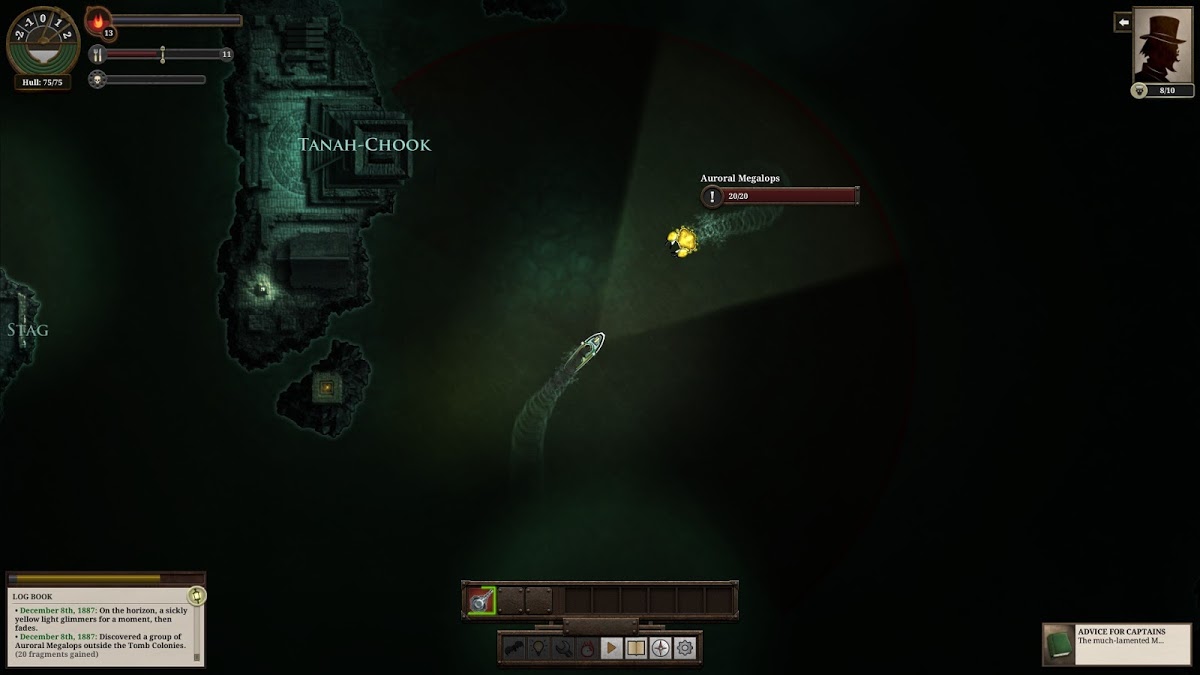 I continue northward and send out my little scout-bat to find nearby islands. It returns tells me that Venderbight is to the southwest! Curses, I’ve sailed too far north. Who knew that could happen?
I turn around and find the city shortly after.
My tomb-colonist passenger leaps off with thanks, but stops before saying goodbye: He has another request: Could I bring another to the same colony? He does not tell me who or why, only where I can find her. I agree to search for her, with my own wary ideas of what his motives are—or if she is as willing to come as he.

Before I leave, I stumble upon someone known as The First Curator, who turns out to be a small, bandaged shape in very poor health. He asks of me to bring him seven colours, and gives me a list of pages on how to find them. I look at them but they all have vague, strange clues I don’t know how to decipher. I accept more out of pity and curiosity than belief I will be able to fulfill his request, but the little being rests into silence as I do so.

I believe it is time to explore the zee.