Back in Hyrule again!


It’s been long enough, so I decided that it was due for a third part of this wonderful, old game. Still haven’t played more than what you read in the last parts (1 and 2), so if you want to catch up you can read those.

I left off a little later, at the foot of Hyrule Castle, wanting to go in there to see Princess Zelda. But I boot up my game, and I start… here: 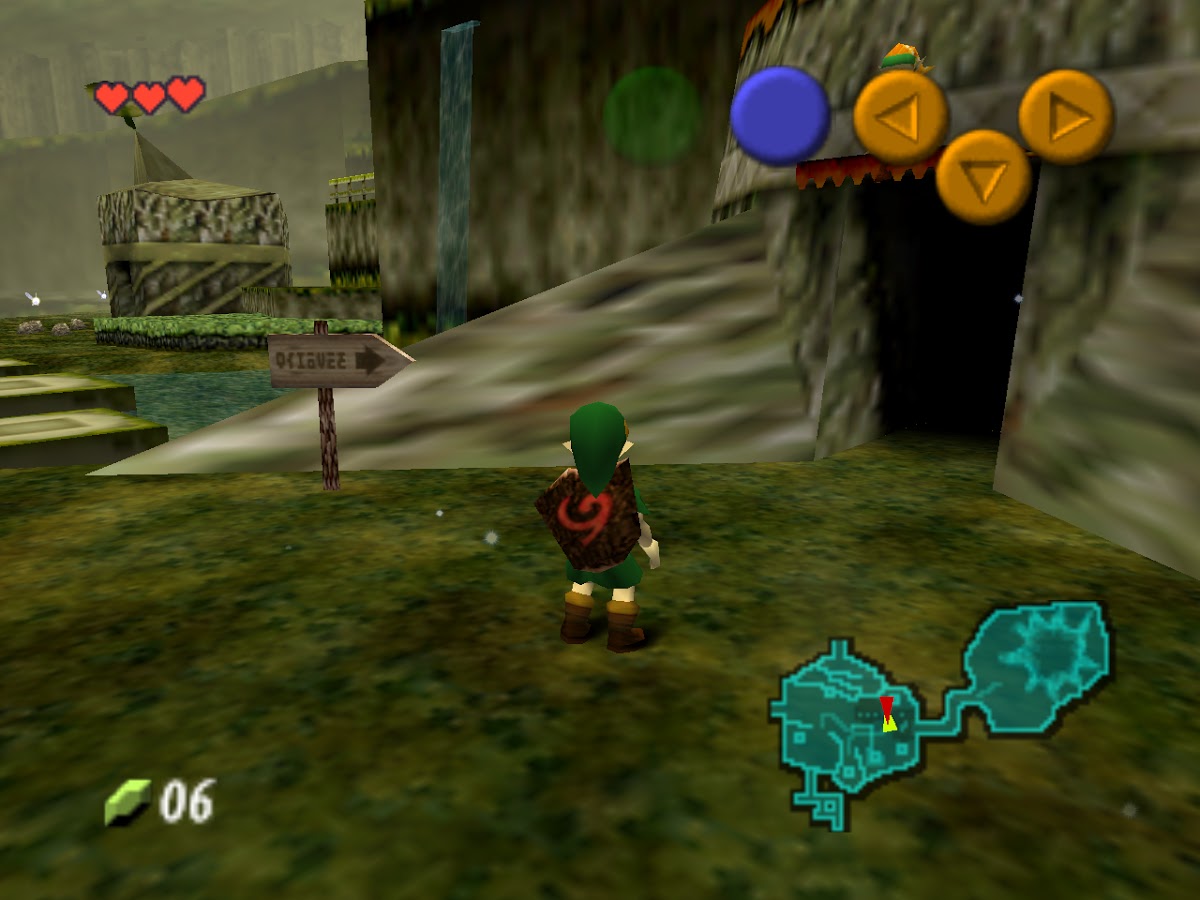 Back in Kokiri Forest (I had to use an older image, since I realized I didn't actually take a new screenshot of this happening)

What? I’m back in the forest? I was so confused I thought I hadn’t saved the game or something (which would have been really bad), but no, I thankfully looked in my inventory and saw that I had the Ocarina, so I must have left the forest… I had just come back.

Oh well, time to leave for the second time, then! 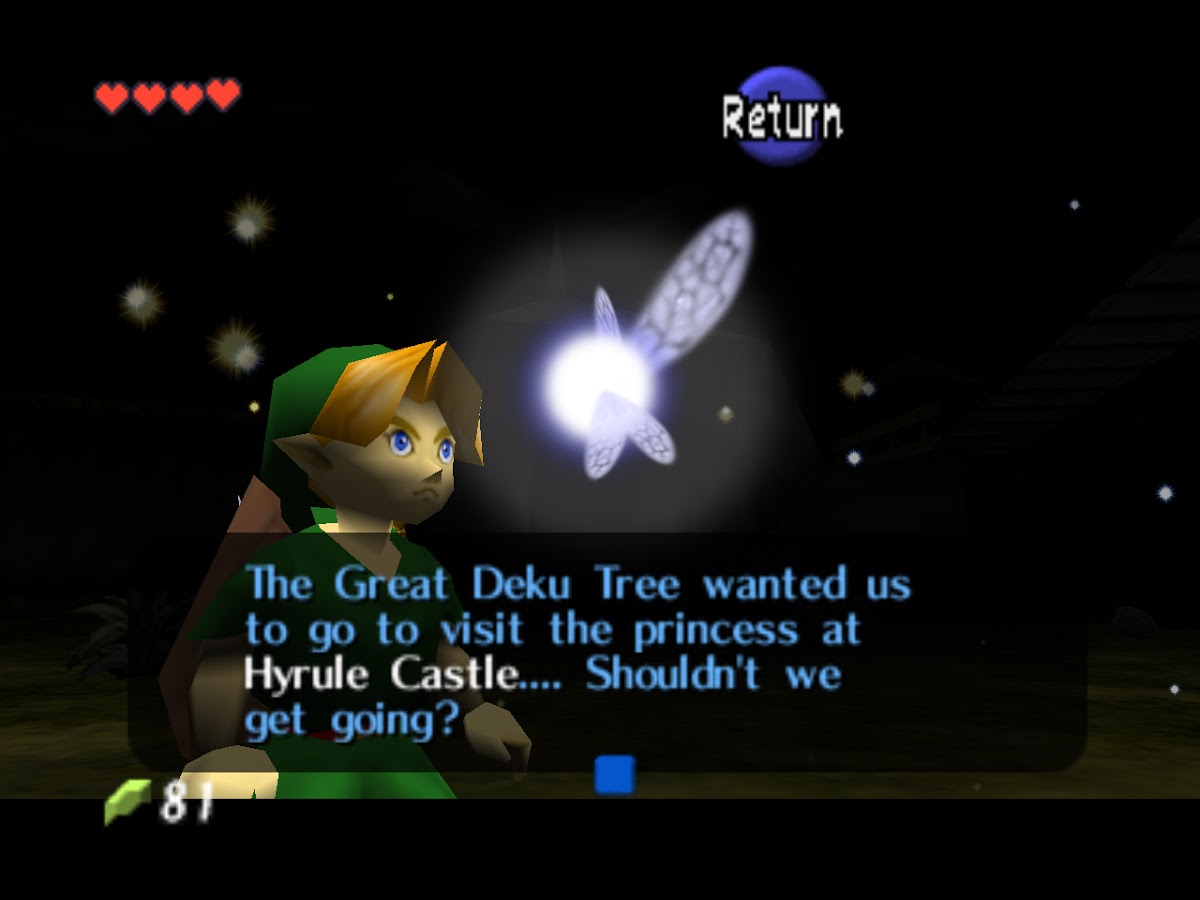 Gee, thanks Na'vi! Would've helped if you hadn't put me back here then!

I get back to Hyrule Castle Town quickly, skip through the market, and get to the foot of the castle again.

But just before I’m about to go up, a girl is standing close to the gate, who tells me that her dad is missing, somewhere up in the castle. And that he’s probably sleeping! Oh no! Then she gives me a “Weird Egg”.

But, I think the fact that she gave it at all is just as weird. “Go save my dad! Here’s an egg!” Uhh.. Okay? Sure. Onwards, towards Zelda!

I proudly walk up to the guard and announce that I want to see the princess! And he tells me this: 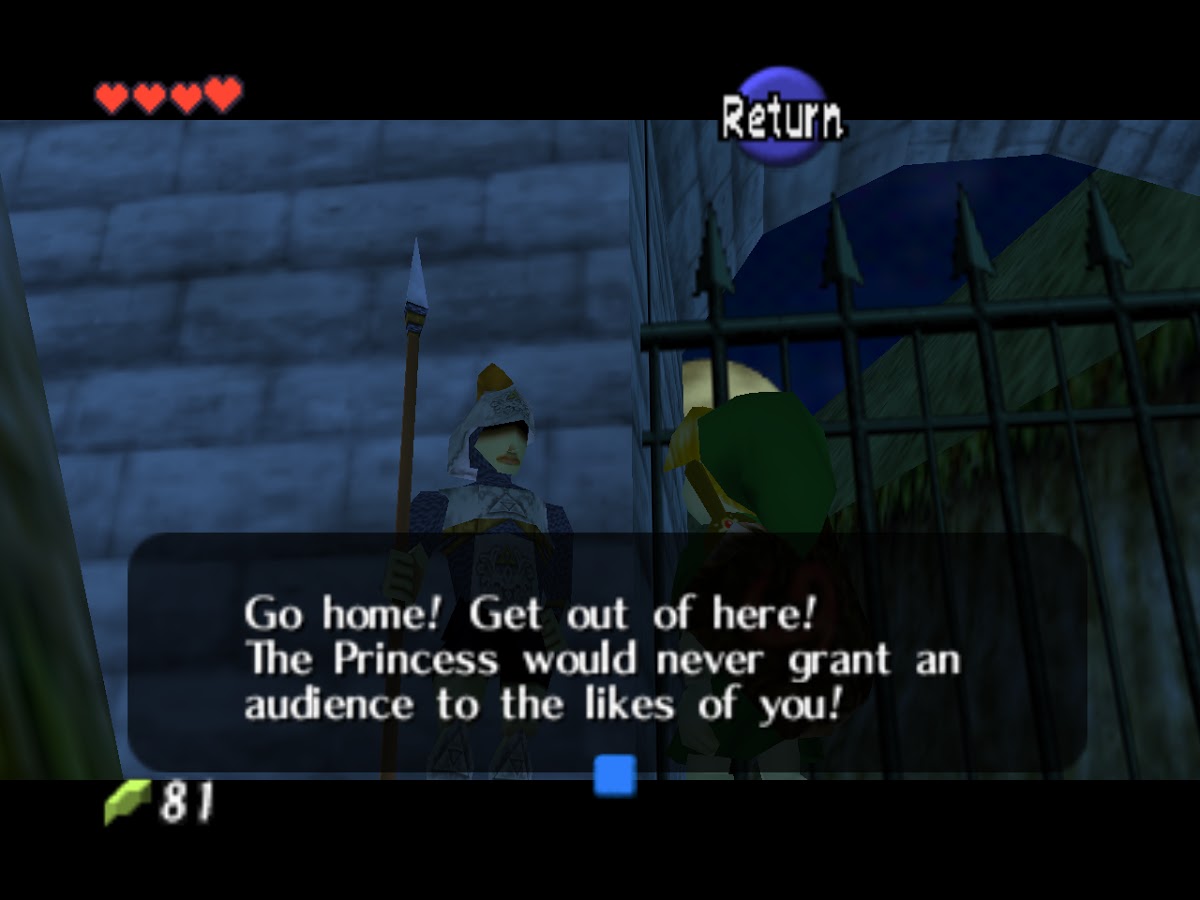 Well. That’s not very kind. I’m the “Hero of Hyrule” and all that (Ok, the game never actually called me that yet but it's coming any day now). Clearly this guy didn’t get the memo. So, I’m off to doing the next best thing: Sneaking my way inside. Up some nearby vines, crawling over the wall and weaving my way through guards with bad eyesight I make it to the castle itself, not without a few missteps, but we don’t talk about those.
Accidentally, I activate the egg during my careful skulking, and it hatches a chicken! In the middle of my bag! Just right as I’m huddling my way through the castle gardens! But I don’t panic, because there is no problem with the chicken being there. Why would there be? It’s just a live chicken in my bag.
Whatever. I can sneak behind the guards, crawl up the last bit of wall and be at the moat—behind all the guards. 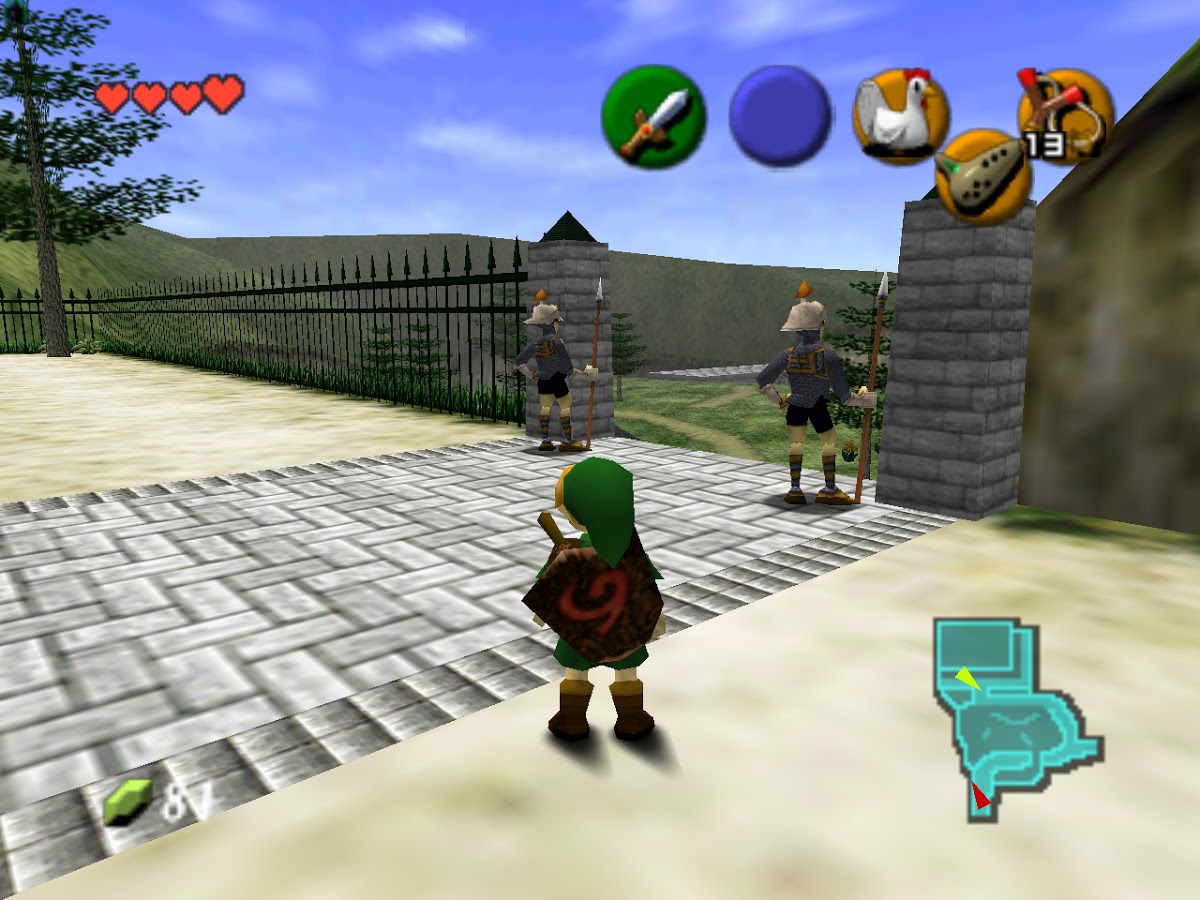 But the gate is closed, so I run around the right side to find… a sleeping guy. Guess who!
I walk up to him and he doesn’t wake.
BUT! I have a chicken!
Not really sure what that’s good for, I pull it out in this emergency. And it crows.

I choose to ignore this oversight in biology and instead be happy that he’s now not in my way anymore. I move some boxes around and can now jump in the castle.

There are more guards in there, and I do some simple sneaking around bushes and walls to finally get to what I’m looking for: 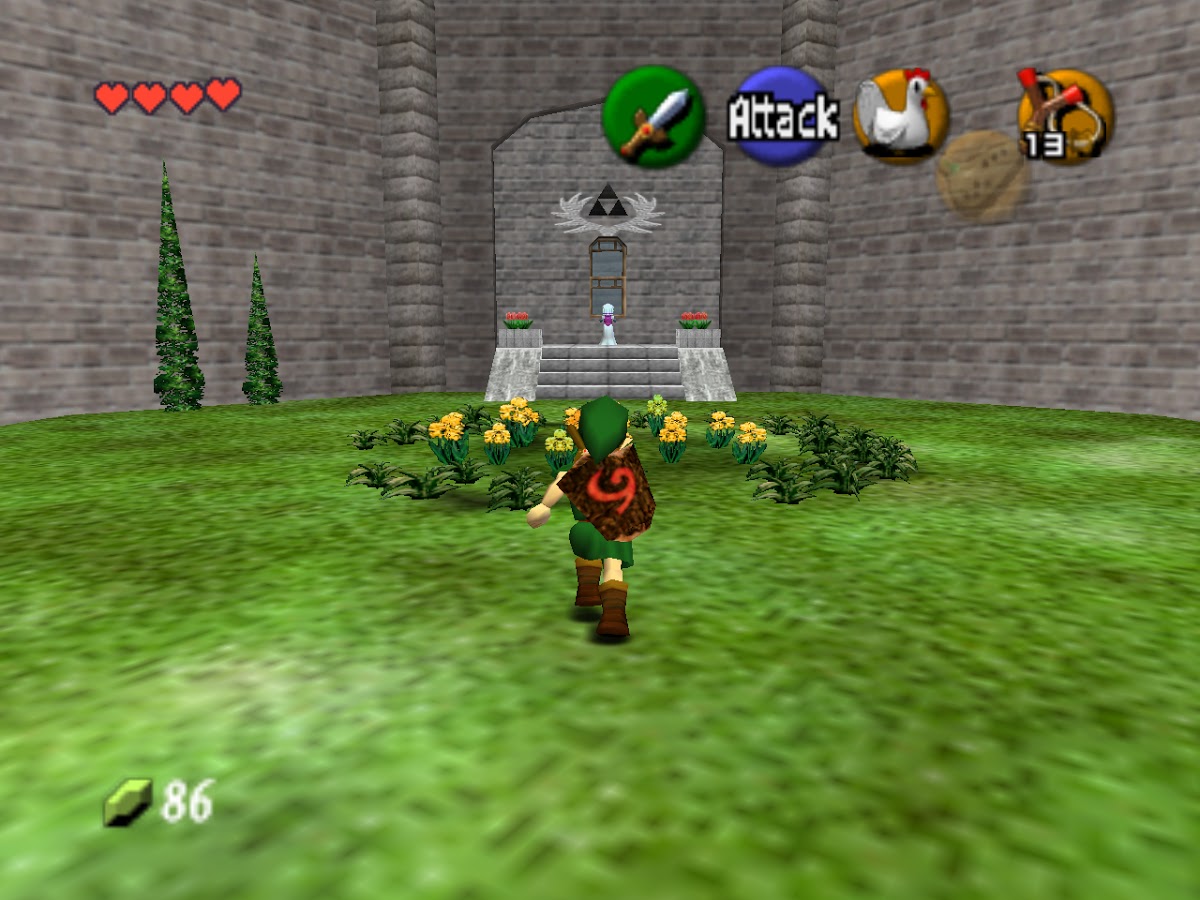 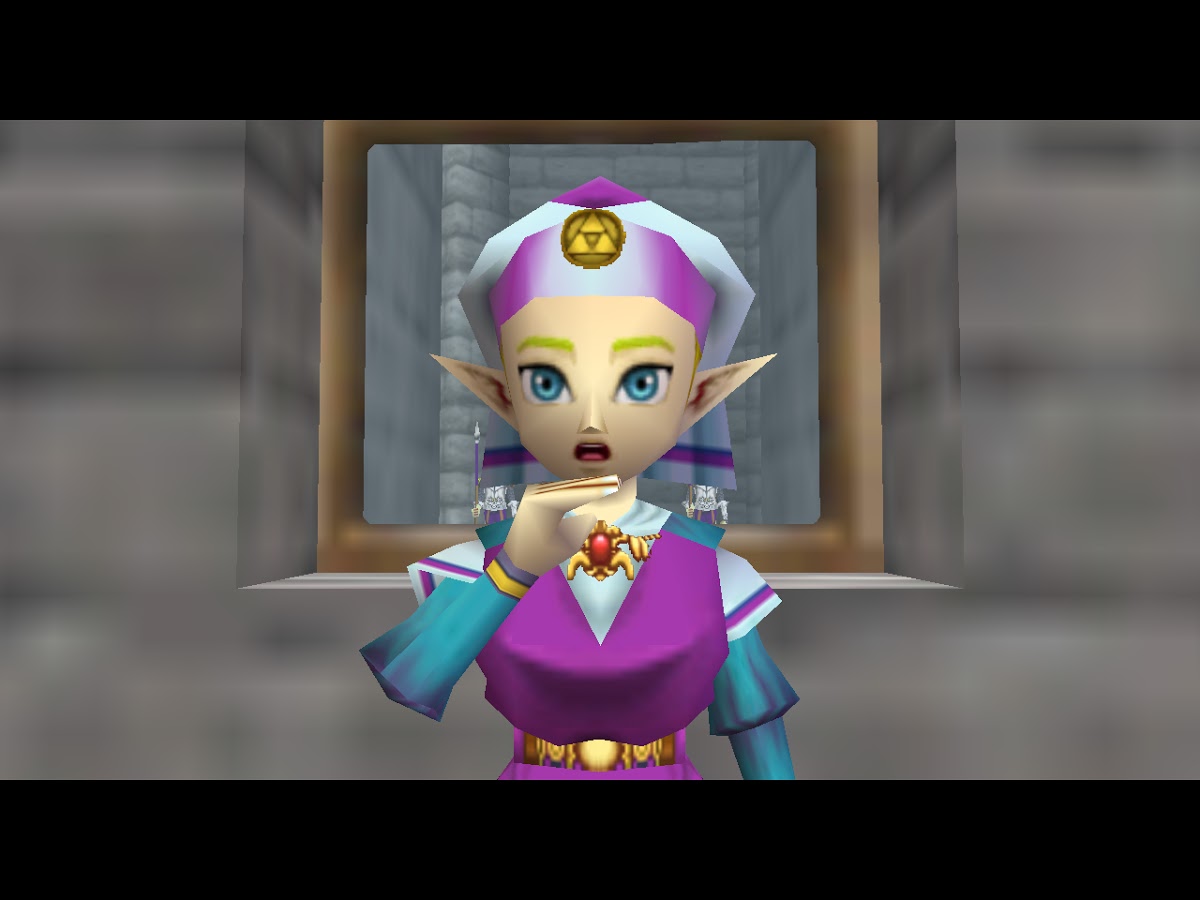 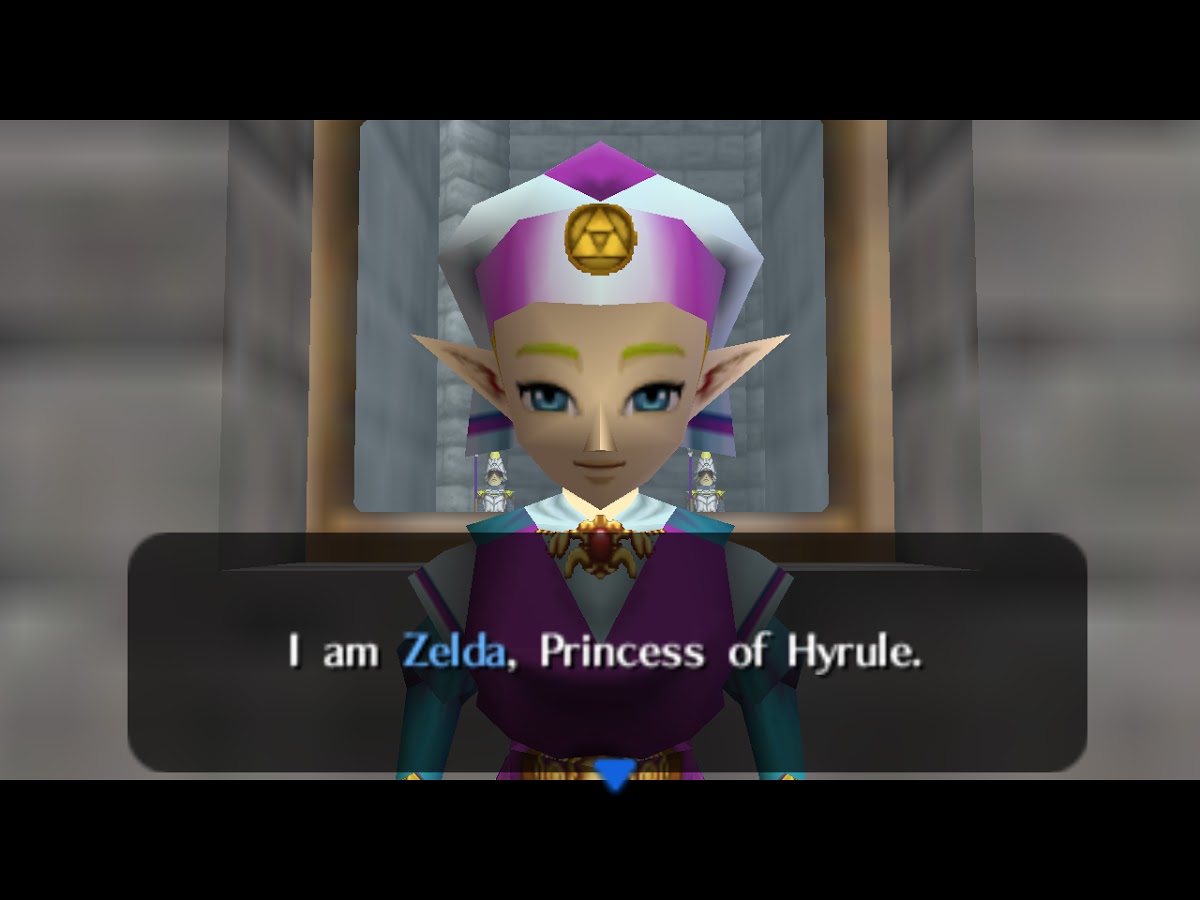 I found her! Game complete!
That’s it, right? Everyone's happy?

But not quite, because she wants to tell me more stories. So I listen to her tale about the Triforce Goddesses (from before, remember them?) and how they hid the Triforce in the Sacred Realm and how I can there through the "Temple of Time", but I can’t get there without passing the “Door of Time”, and for that I need 3 “Spiritual Stones” and the "Royal Treasure", which happens to be the “Ocarina of Time”.
You with me?
So I need to get 3 stones (one of which I have already. Got that in the forest) and a different ocarina, so I can open a door and get 3 different, more important things.

Got it. Clear as your green eyebrows, Zelda.

Then she reveals to me that she had been spying through a window to the throne room.
Spying. That’s quite a thing for a princess to reveal to a relative stranger. I mean, we’ve talked for barely 5 minutes at this point. But she tells me that in there is the “dark clouds” from her story, which was a dream, which is a prophecy. You know.
And the man she’s seeing in there is “Ganondorf”. Yup. I know that much about Zelda games. He’s the bad dude.

As a final goodbye, Zelda gives me this: 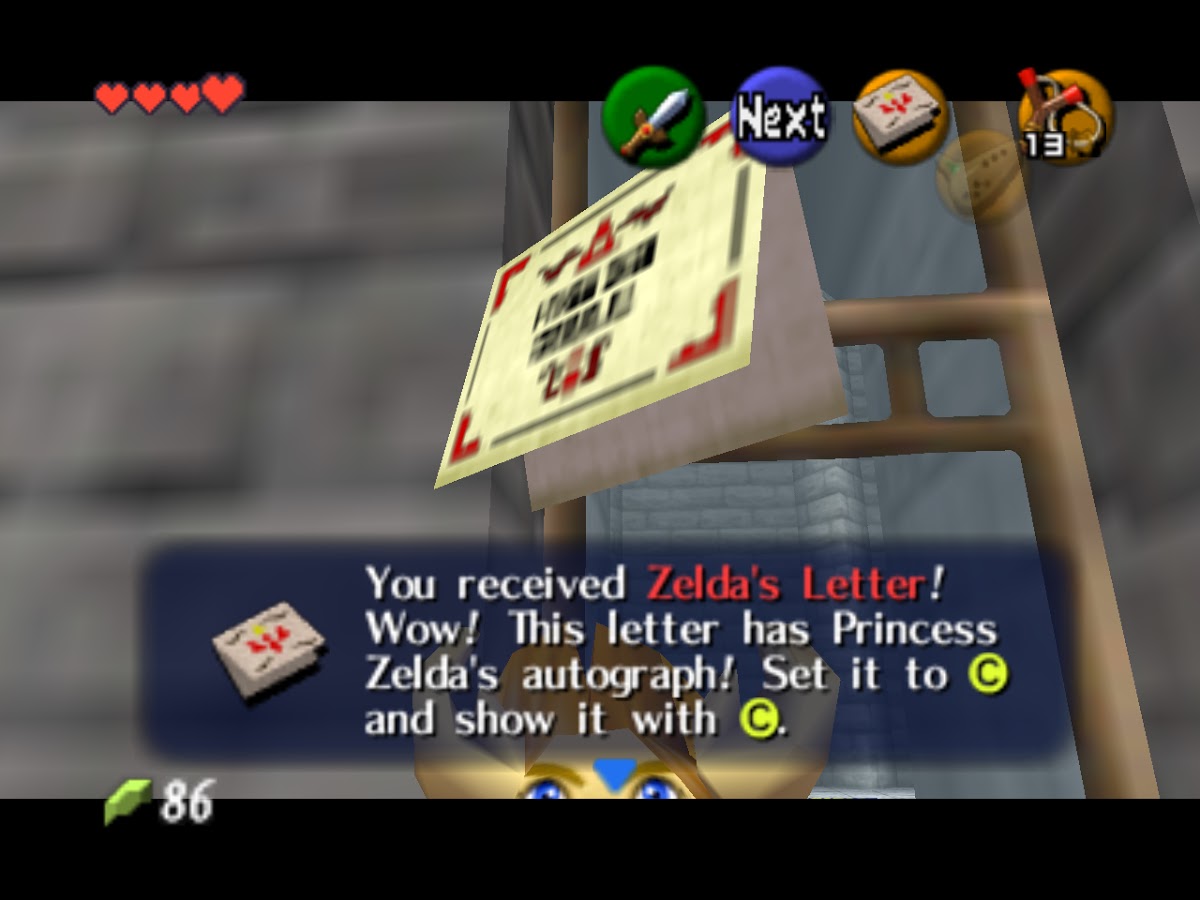 YES! I got her autograph! Wait till my friends hear about this! Mission accomplished!

A lot more happened in the hour I played this but I realized already that I would have enough to write about with just this little chunk. This game is just full of interesting events to write about. It practically writes itself with this strange sense of old-school design, awkward graphics and Japanese Adventure Game story. Maybe I have to think about doing something different for this game. Like some full-blown series? Or a more regular thing at least? But don’t know. Let me know if you have any ideas!