The final expansion for The Witcher 3, "Blood and Wine", is coming up in 2 days, so I thought I’d prepare a bit with a little Sunday Morning Stroll through the war-torn land of Velen with our trusty fellow, Geralt: 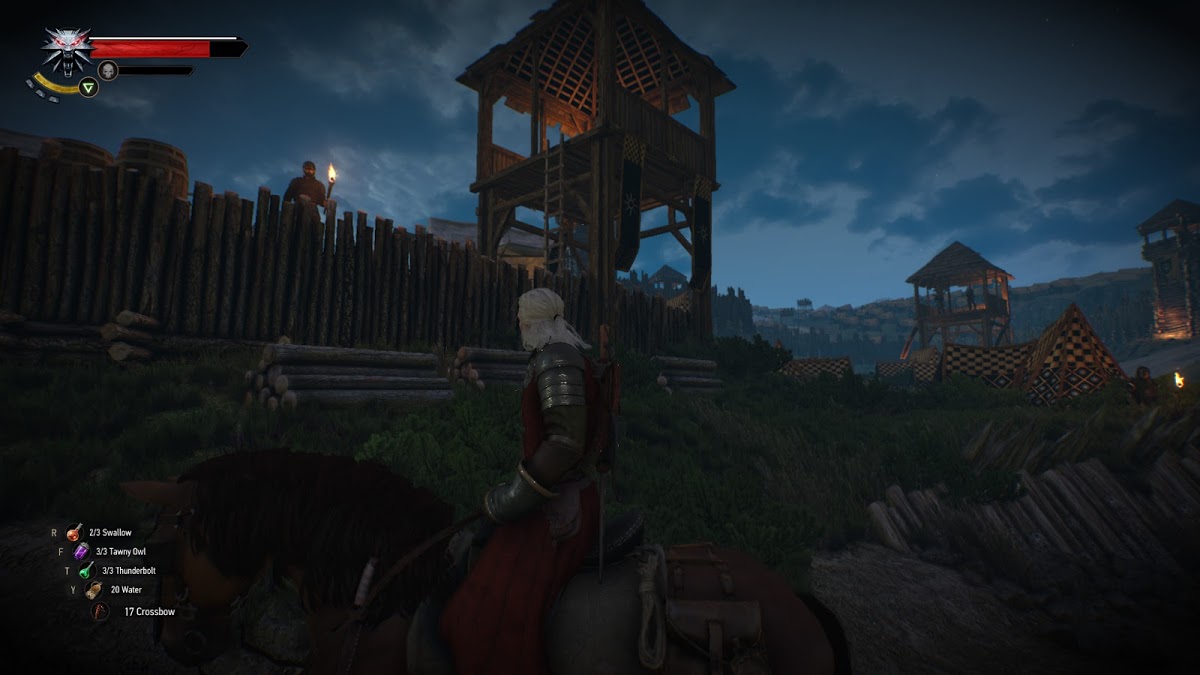 I booted up my second playthrough (not the one I’ll be playing the expansion with, but one that’s now 1/3 through the game (just about to enter Novigrad)), where I’m now running around, tying up loose ends and exploring the wilds of Velen before I wave goodbye for good.

First, I start in the Nilfgaardian military camp, all the way south east of the map (Brief lore summary: Nilfgaard and Redania are at war here, Nilfgaard to the south, Redania to the north. Neither are particularly good people.). My business there was all done, though, so I begin setting my course northward in search of quests and whatever else.

I start following the path, but am quickly led astray by a series of inconspicuous houses off to the side. Jotting closer on my horse Roach, I see there’s an Earth Elemental guarding them. It’s way stronger than me at the moment, so I flee the other way real quick, only to discover something strange up in the horizon. 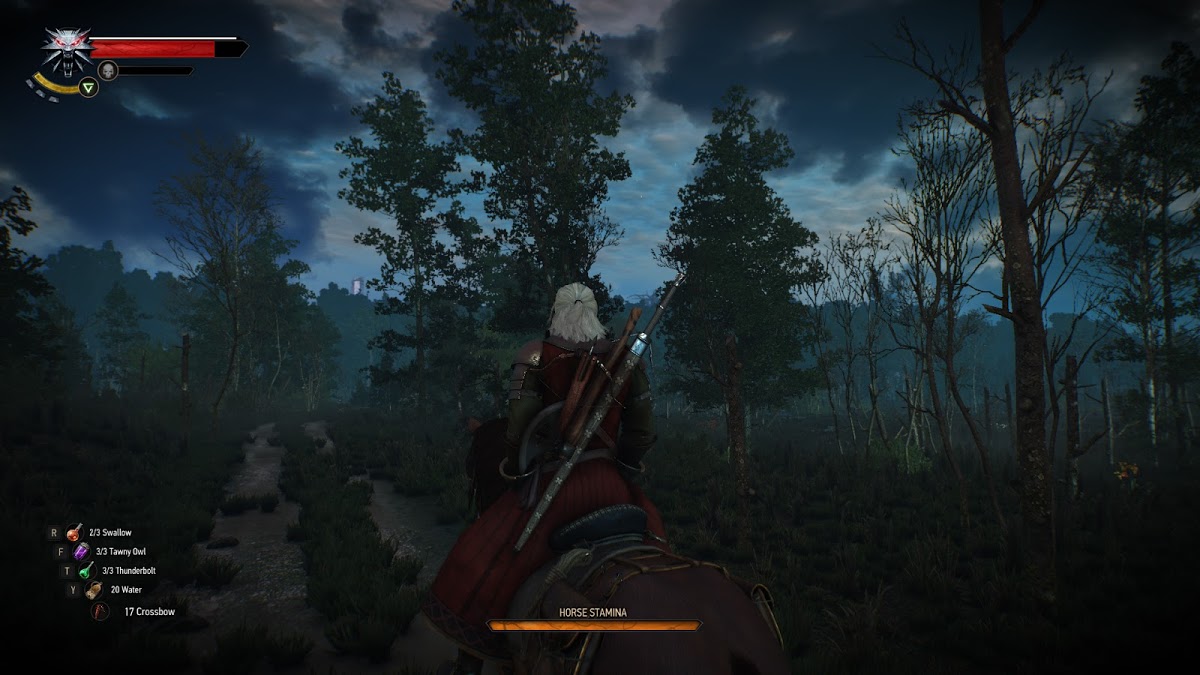 WHAT IS THAT? Left of the two big trees. Small, a little bluish.

To me, it first looked like a Portal of some kind. So, naturally, I needed to investigate. 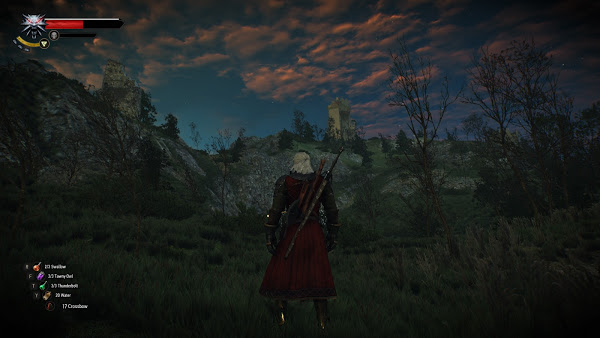 It's a little hard to see, but comparing the two images, you can see they have the same outline. The bluish thing is gone though, think it was the light playing tricks on me.

I ran straight towards, it, only stumbling against some wolves on the way, and before I knew it, I was sorely disappointed.
It wasn’t a Portal. It wasn’t even magical. Just… a ruined Bastion.

Oh well, there was treasure there so I wasn’t entirely let down. Also, look at that sunrise: 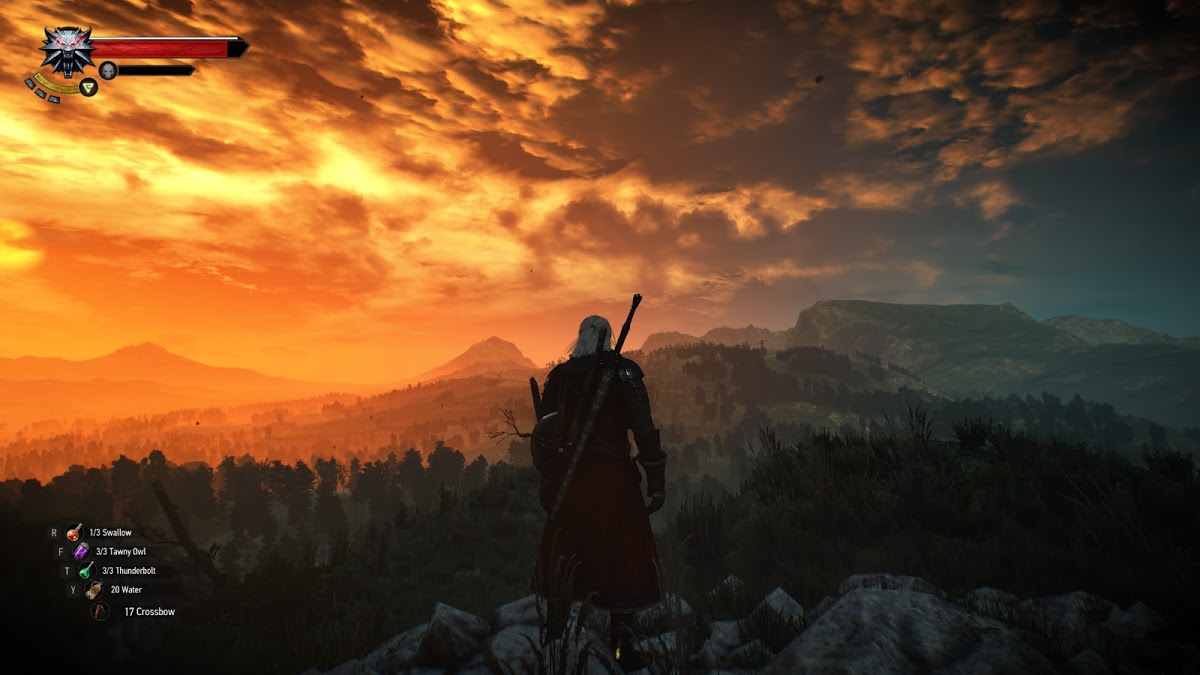 Anyway, here’s where the misfortune began striking our dear Geralt. Climbing up to the top of the ruin, we found ourselves here: 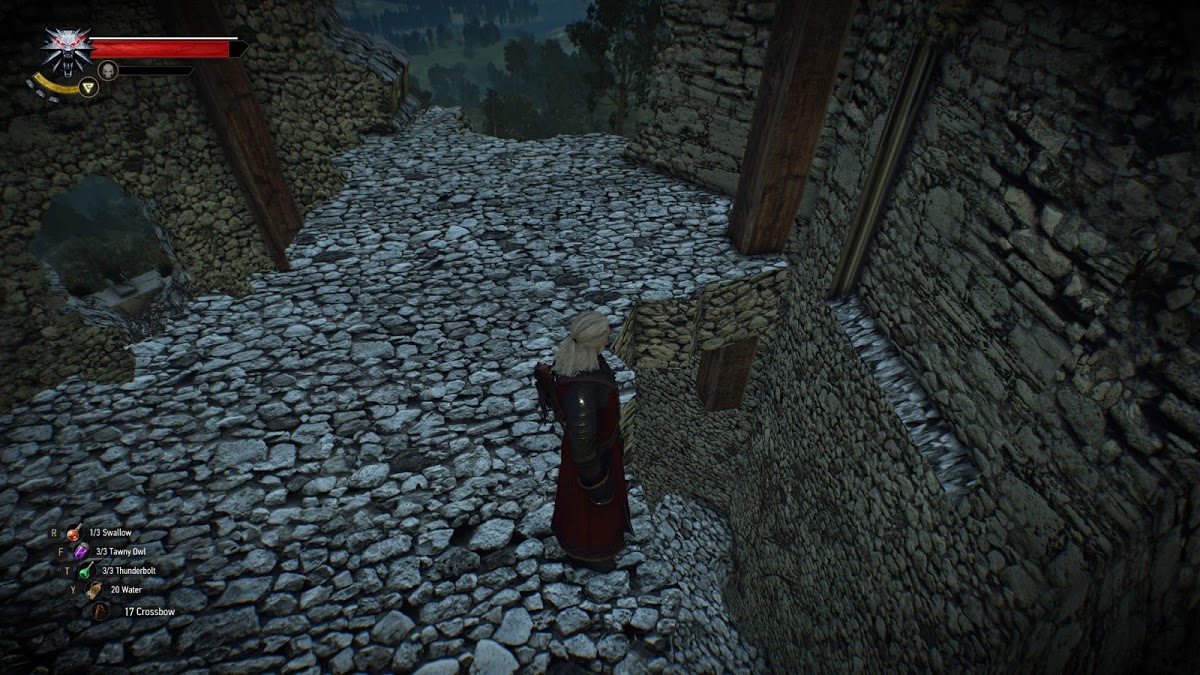 Long way down you say? Well, let's test that!

Then Geralt said. “Long way down.” Right as I stopped there. And looked down the abyss. So I thought, “maybe there’s more treasure down there?” And I jumped.

Hm. Then I reloaded the save of me standing right up there again, and somehow I went through the ground, landing awkwardly, but safely, on a ledge on the well, before falling all the way down the pit.

But since I had landed halfway down I didn’t die this time. Instead, I hit the bottom.

Which turned out to not be the stone: 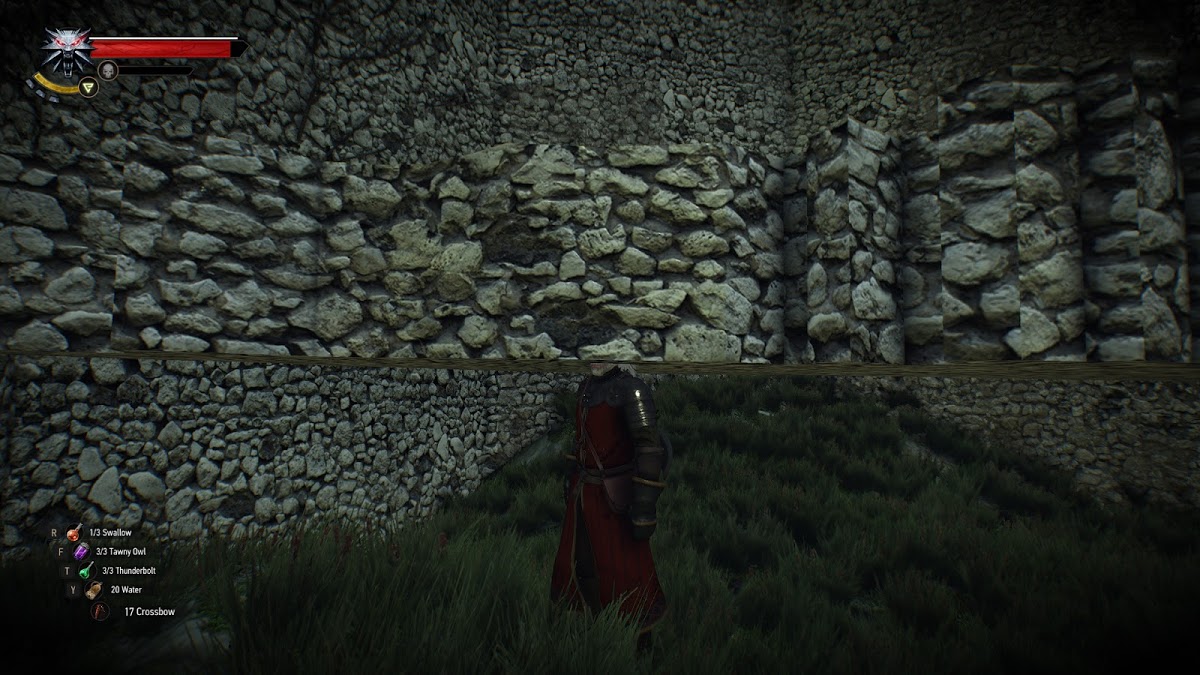 So camera shy he'll hide in the stone!

I mean, it’s the game’s own fault for drawing attention to the hole, really. I blame the game.

So I had to reload the save again, and carefully, carefully, step away from the hole.

Down again, I ventured on, fought a few more things until I found myself along the edge of the lake to the west of there (don’t remember the name, sorry).

And I just wanted to take a nice screenshot when— 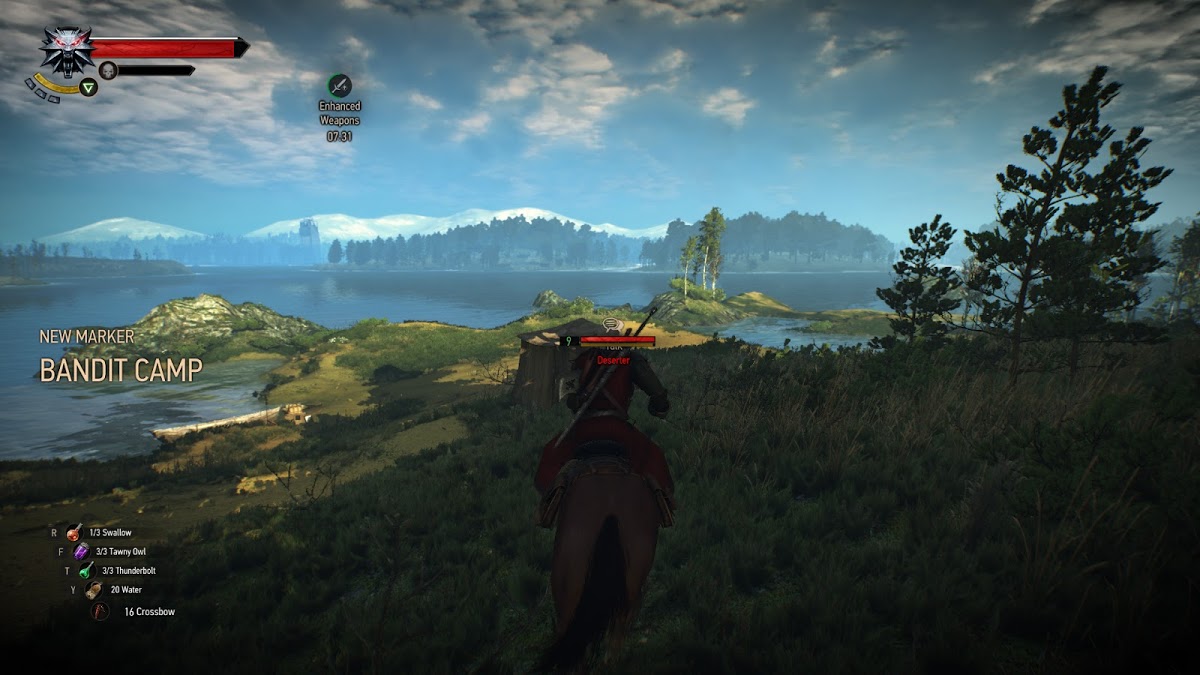 Bandits! Right in my image?! No can do.

I fought them with a vengeance from the safety of horseback, until they were all down. Then I inspected their camp and found this: 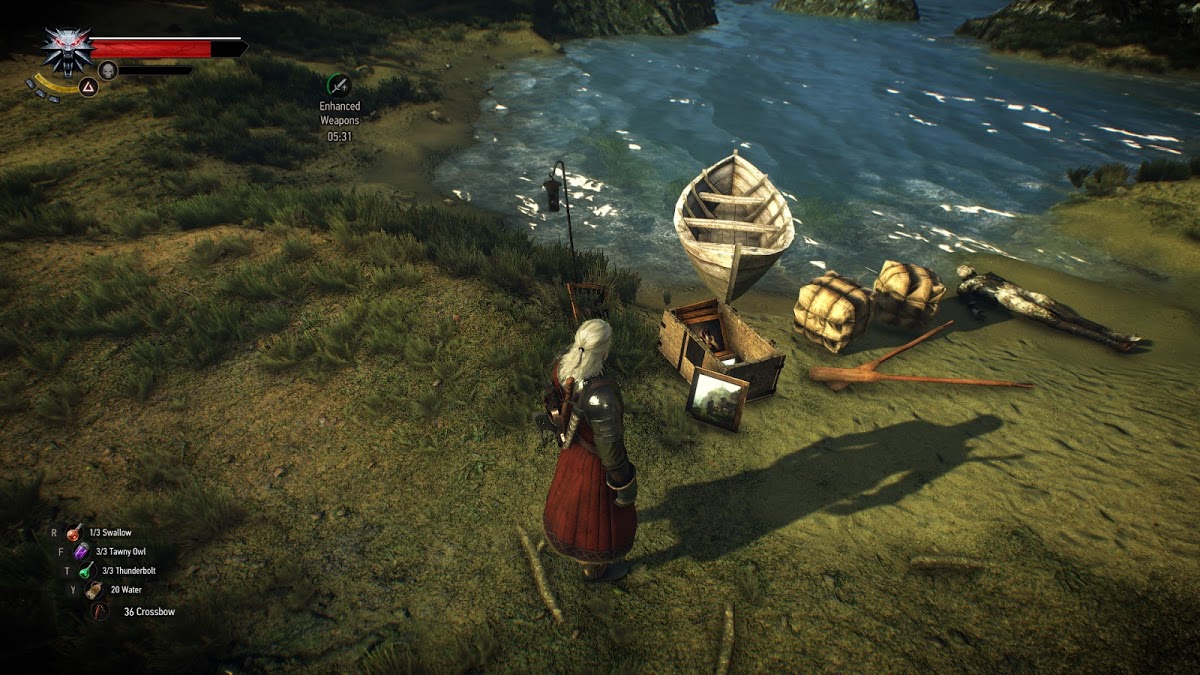 They had looted a painters’ stash?! And ruined my image?! Man, these guys had no appreciation for art.

There we go. A nice image of the lake. Don’t mind the dead bodies.

A Witcher needs to take his images. It’s important to the craft, or something.

Anyways, more happened, but not much of particular interest. I rode over a bridge both forwards and backwards, fought a gravehag, and had trouble finding the gravekeeper in Lindenvale. But I’ll leave you here, waiting in anticipation, eagerly for Blood and Wine to release.

It’s got no relevance to anything, I just liked this shot. Man, this game looks good.

Also, I managed to do this without showing Geralt's face once! He really is camera shy. Who knew?