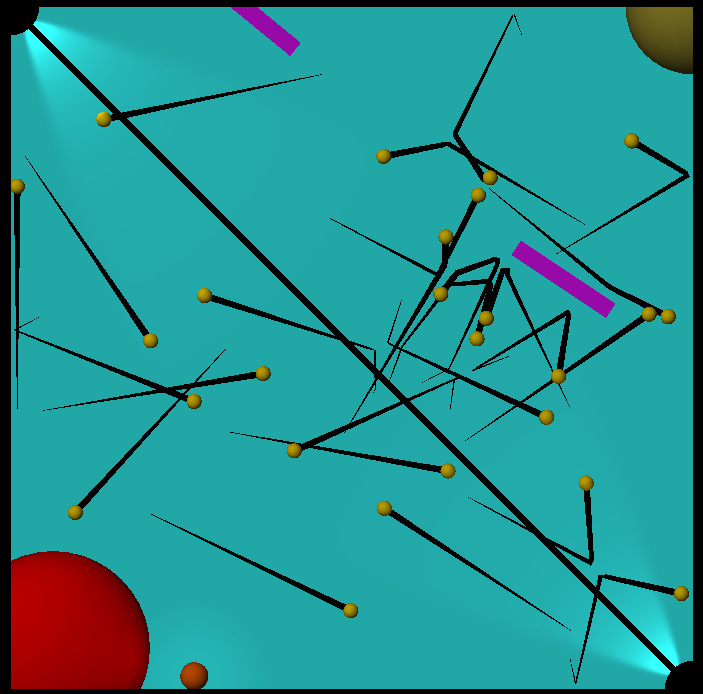 [This is a really tired blog I that I'm putting up because I haven't put anything up the past week and a half, and I've been sitting on this for a while without the time to actually finish it. So here goes, it's not great, but I just need to get it out]

This is a major/minor change. It's minor because it's a small change, but it's major because it really changes the way the game is played.

Redirect is now no longer available on a cooldown. Instead, it recharges through bullets hitting walls. This means that the player has to be aggressive about placing walls down and trapping bullets in order to use the best ability in the game.

This adds a really cool interdependency between the abilities, and initially it feels really good. It gives a whole different level of play that wasn't available before. Because of the amount of walls available (if there are fewer I'm afraid the game would be impossible), and the fact that the player with smart timing can trap a lot of bullets on the right side of the field, the redirect ability can end up charging much faster than it did previously. Sure, the recharge time is slower in the beginning, when there are fewer bullets and fewer walls, but in the end, if you continuously make sure to place down walls, it can be ready again before a second has passed.

What does this do?

It means you can constantly redirect the bullets back to the yellow corner, and constantly place walls to prevent them from getting out AND recharging your redirect. It's crazy. It's super frantic, and when I play like this I sit super focused and just hammer down walls as fast as I can and spam the redirect button and make sure to shoot out a few bullets every now and then, while also trying to protect the red corner. It feels pretty intense. And that part is pretty fun, I think. I feel like, alone, that works really well. (I'll try to get a vine of it at some point but I can't record and play at the same time.. easily at least.)

I feel like it is getting part of my initial goal of the frantic nature of the game down. But I also don't feel like I have as much control over what I'm doing because I have no time to plan where the walls should be placed, they just need to get down fast.

Maybe I should really try with mouse/keyboard, because mouse offers better precision.

Ok, different thing: I tried adding a way to remove bullets: By shooting bullets. Don't worry, it's not as stupid as that may seem. The idea is that when you shoot a bullet it first acts as a "damaging" state, where every bullet it hits will get destroyed, but only until that bullet hits a wall, then it acts as a normal bullet.

Ok, I tried tested it out and it's… interesting. Something odd happens. Every time I shoot out a bunch of bullets, they go around and hit others until there is around.. 10-14 bullets on the field.

Every time. Just around 12 bullets.

No matter how many bullets are on the field currently, if I spray out a bunch of new bullets, I will reset the field to around that amount. It seems that is the point where the chance the bullet won't hit two other bullets is just around the same as it not hitting any, thereby always equalizing the board.

While that's incredibly fascinating from a theoretical standpoint, it kinda sucks from a gameplay one. I would want the challenge to be increasing so while you could eliminate some bullets by shooting, there will still be an increasing amount of bullets on the field. That doesn't seem to happen with this ability. Law of averages at play here. Averagely, around 12 bullets is the point where the amount of empty space outweighs the amount of bullets with the current size and speed of bullets. Sure that could be tweaked, but then the problem would just stand at a different value—but still ultimately be the same problem.

So, for now I've scrapped that idea. No matter what I think the game will play against me with that type of rule in play. Which is, in some ways, really interesting.


I still have the problem of not being able to defend well. As soon as I fail in the frantic wall placement in the redirect loop, I'm dead. There are too many bullets at play at that point to be able to save it if they pass to the left side without a redirect available.

This means that the game is very short. Shorter than I would like it to be. I'll try to bash at it a bit in this weekend, as I finally have some time away from school work again :)