(I'm sorry that I started with a dictionary quote. I know.)

As I might have hinted at earlier, or as described in the "About me" thingy, I write. And by that, I don't just mean that I write this blog or that I write in general.

I do what I guess is called creative writing. Writing Stories. (In Denmark, I have never heard the term "creative writing", which I find an odd little linguistic quirk. I guess we just call it "writing fiction").

I have written through my life for different reasons, and I've always enjoyed writing stories, but it's not really until recently that I've started doing it as a more serious thing.

By that I mean that I wrote a book.

Now, I always have reservations when saying that, because it's not actually finished yet. Except—it is. I finished the story a year ago, but it's not out yet.

No. It's not finished yet.

I know, but I'm still working on it.

Sigh. No, I am working on it. Actively.

The confusion comes from the fact that the entire story is there. It's got a beginning, middle, and end. It's got a plot and characters and twists and development and a world and a knife and mystery and subplots and fire. It is a full story. When I say it isn't done I'm not talking about those things. I'm not saying I just have started and I got stuck somewhere and I stopped, even if it has stayed at roughly the same page count for the past year.

What I am saying is that I am doing revision.

Most people understand this in a very specific way, though. Some think "Oh, ok, you're looking for errors and stuff. Sure. Does that really take a whole year?"

But that's not what revision actually is. Sure, that is a part of revision, but it doesn't come until way later. That's for when I'm done with the story and I just scour everything through for errors.

Revision, the heart of revision, is the willingness to change everything. It's looking at a character, a chapter, a story, and saying "Should this be like this? Does this really need to be here? Would it be better if I did something entirely different instead? Do these things actually serve my story?" Revision is that much harder period after you've "finished" something and having to go back and changing it. I've added characters, changed entire plot points and rewritten chapters, simply because I could make the story better by doing so.

Because while you would be able to read my book now and "get" it, it wouldn't be the experience I want it to be. It wouldn't be perfect.

"If it ain't broke, don't fix it??" Pfft. Don't be ridiculous. Do you want to read a good story? Or a great story? Or an amazing story? Or an even better story?

The differences between those lies in the thought put into each part, into each sentence, into each moment. That care is achieved through revision, through rewriting, through reinterpreting what my story needs. You very, very rarely create the best version of a thing the first time you do it. So therefore you try again.

And that takes a while. That takes several repeats of rereading the same things, it takes getting input from beta readers, and even taking a break and doing something different for a while, so you get distance from the work you've been doing. 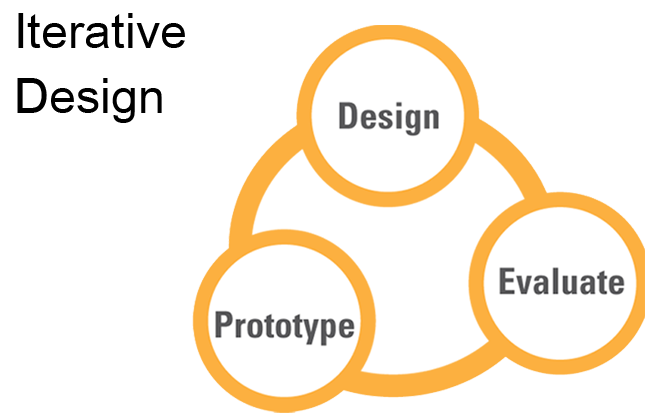 A simple version of the iteration process in Design. Source. (Slightly modified to allow transparency)

If you're a designer, or know about design, you might think that this is oddly similar to the iteration process. But that's not that odd at all; because of course it's similar. It's the same basic thing of redoing and redoing and slowly improving in increments in order to get something amazing. I think all creative work—all creation—needs to go through this type of process before it can get good.

When we start doing something, we never really know exactly what we'll end up with, and our ideas and feelings about it might (read: will) change over the course of making it. And that's a part of creating something; we pull it apart and reassemble it in another way.

I revise because it makes my things better, so, hopefully, when I one day lean back and consider my book done, it will be amazing.