You arrive at the crossroads too early. There are farmers in the field, cats purring on the road, and children singing on the roadside. Only, the children are singing of gore and torment and not a soul cares.

Welcome to the second edition of my Moments Feature, where we see how small moments have large shadows. This one is about The Witcher 3: Hearts of Stone.
I was going to write about the Witcher eventually, so it might as well be now! Truth be told, I have a lot of possible moments from The Witcher series I could choose from (I uh… really like The Witcher), but I’m going to choose the possibly smallest one first.
This is a moment so small you could have totally missed it and I wouldn’t blame you. It pretends to be scene-dressing, something you could have just walked by, but turns out to be the entire story in a song.

(SPOILER WARNING: I will spoil pretty much the whole Hearts of Stone, even though this moment is in the beginning of it. You can, however, read the piece without having played it.)

Ok, setup time:
Geralt, the titular Witcher, had been imprisoned onto a ship by a group of people after killing their prince (uh, long story and not relevant here, somehow), and on way towards his execution, a mysterious man appears in front of the cage.
This story is in the first Expansion to the Witcher 3, and thus takes place after the main story is over, which is why the player is a little surprised to see a character who was only a minor, odd encounter in the prologue—about 80-100 in game hours before this moment. A man named “Gaunter O’Dimm”, who presented himself as a merchant called “Master Mirror” but who has since been completely gone from the story.
Now he shows up here and tells Geralt he can get him out of this predicament if only you will enter a deal with him (he is, as he says, a merchant). Facing certain death if you stay on the ship, Geralt agrees.
Then he magically disappears and the ship crashes.
Which, hey, more than a little suspicious. 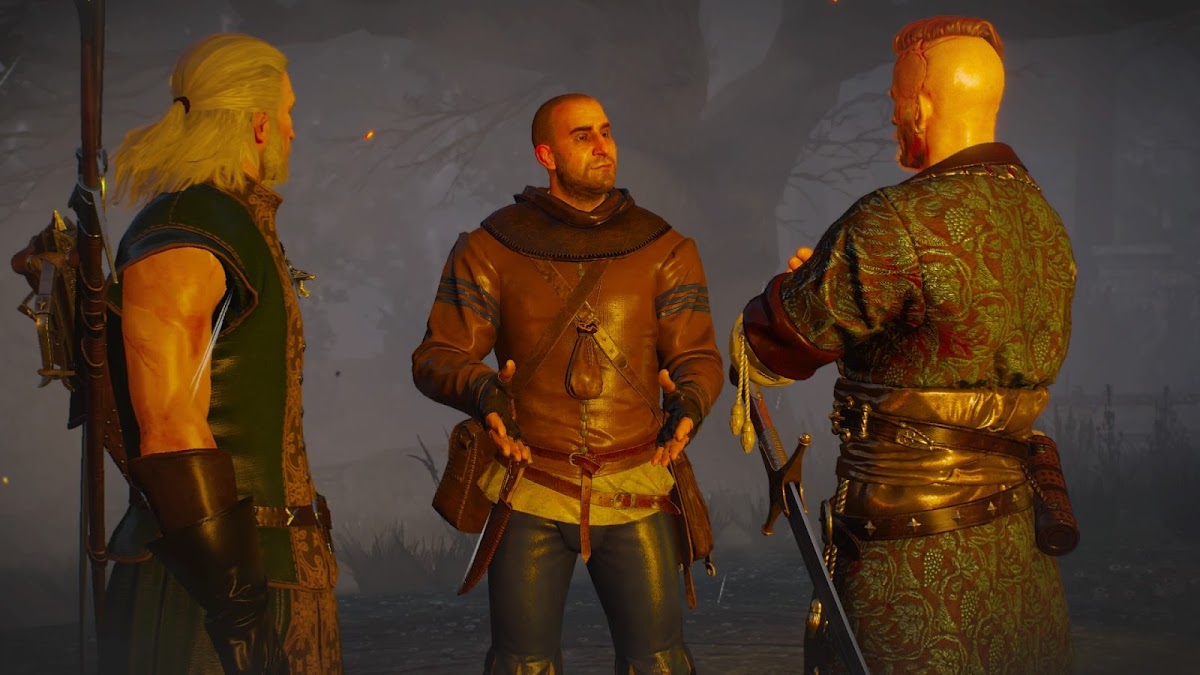 Just a merchant, right? (To the left: Geralt. In the middle: Gaunter O'Dimm). Source.

Master Mirror gave Geralt a location and a time: A crossroads at midnight (and the read among the players will already start to see what’s going on here).

But before you meet him, as you jot along the road, overhearing farmers complaining and children playing and birds off in the distance, a group of four kids are singing a song.

This is normal at first, just an everyday occurrence. Just the world being lived in. But just as you’re about to walk past, something catches your attention. Be it the strength at which the kids are singing or the words themselves, you stop, and watch them sing it in full. Because this is no ordinary children’s song.

The title is a bit of a giveaway :P

First off, it’s bloody creepy.
Pay any attention to the lyrics (seen in full here), and you get the sense this is not something light-hearted.

The first four stanzas are innocent enough if you’re just passing by, but then it shifts, just as with Gaunter himself, onto a darker side, when indeed “Dues need be repaid”, ending on the quite literal horror of “To gore and torment you till the stars expire”.
Sheesh! Why in the world are kids singing that?

Of course, reading it here, it’s obvious to you that it’s about whom we’re about to meet, but when you first come across this, it isn’t so obvious. Nothing about this encounter with the children indicates at this moment that it’s about him—other than the proximity, but you can in fact stumble upon these kids before you ever get the quest to meet him, so it just seems like world-building. A creepy atmosphere sewn into the fabric of the world as it is everywhere else.

Yet, what it is, is classical literary foreshadowing. It tells the entire story of Hearts of Stone in 8 lines. This is everything you need to know about Gaunter O’Dimm, compressed before you have any context for it. This is tone-setting, and mood-building, beyond anything else, as any good foreshadowing, it sets expectations.
You know this is about to get creepy. It’ll start out nice, but it won’t stay that way.
And if you’ve played it, you’ll know this mirrors (hah!) the arch of Hearts of Stone well, with the light-hearted heist and wedding first, to then twist into a dark story of regret and ambition with the painting and the finale. 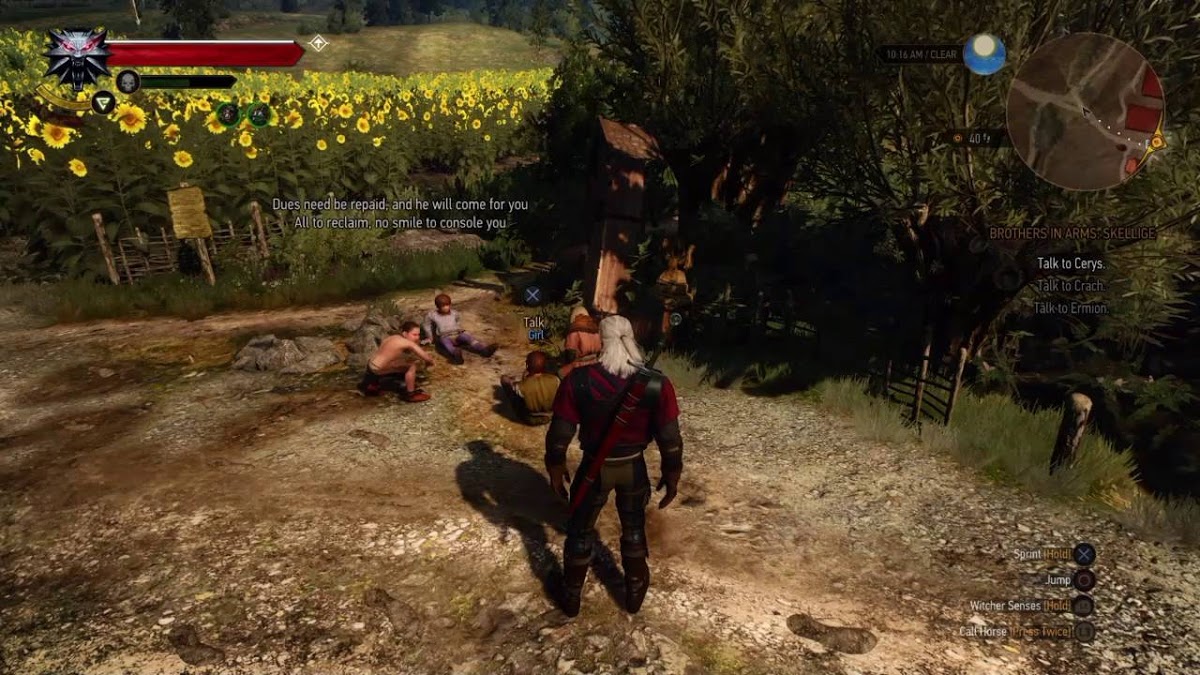 Idyllic, until you notice the words. Source is thumbnail of this.

And while it is classical foreshadowing, a video game has the added bonus of making it not obligatory. It seems unimportant. It can be mistaken as irrelevant. There’s little to indicate that the two are connected until the very end (unless you notice Gaunter O’Dimm whistle the exact same tune—but that could have been because he just heard it!).
It rewards those who pay close attention but it doesn’t punish those who doesn’t. If you miss it, you miss it. Gaunter O’Dimm is still creepy as all hell in the rest of the story, you don’t need the kids to tell you that. But after you’ve heard it, it sticks in your mind, stays there, like information you don’t quite know how to use. It’s memorable, just because of how off it is.
And it works because it isn't critical information yet is memorable, all at once.

The player’s only choice here is to listen or not—the children will sing regardless. They’ll sing as if without remorse or acknowledgement of what they’re singing. It seems foreign how children can keep singing a song this grim and not feel repercussions, not be scolded, or not have any one of them begin screaming or laughing or asking questions. They’re just singing, over and over again.

Which, granted, is obviously a cost-thing, since it’s far cheaper for them to keep singing and not have any AI control it, but here it works wonders to serve their intent.
It’s more creepy to have them keep singing than if they did it once. It feels oppressive, as if Gaunter himself made them sing—toying with Geralt even before they meet.

A close up of the man himself, near the end. Source.

Geralt (and the player) has no choice in how the world sees Gaunter O’Dimm—that’s been decided way before he arrives—and the player (along with Geralt) only realizes too late what was agreed to on the boat was not in Geralt’s favour.
Because what we learn from the song is that this isn’t some random, skilled merchant. As soon as the song is about Gaunter O’Dimm, we realize this character is known. It’s someone children sing songs about. It’s folklore, written and performed, practiced like any nursery rhyme. The children are told to fear him (whether they do is another question, but children be children).
It instantly adds a layer to the quest, it gives O’Dimm a place in the world that we suddenly feel like we’re messing with—it makes the story feel infinitely larger and more personal at the same time.

But the final moment I want to mention, which solidifies the song, and is probably where most people will have heard it (and was the moment it all clicked for me) is the “good” ending of Hearts of Stone, where you’re solving Gaunter O’Dimm’s puzzle. Here you get transported into his black-and-red realm and must solve his final riddle to best him (also, pretty solid way to handle a “boss fight” against a non-martial opponent), but as soon as we enter that realm, a new song kicks in in the background, and the choir seems eerily familiar.

Here's the song, alone. For a video of gameplay of the moment, see this one.

And this is where the game finally reveals its hand, showing that this song was intended, was planned, from the very beginning. Going from diegetic occurrence to soundtrack (which, hey, could be diegetic, it’s his realm after all and he is messing with Geralt’s senses), tells the player that all this time you’ve been fighting a god and it’s only now that we’re open about it. The player is now fully aware of what Gaunter O’Dimm is and, while still struggling to fight him, haunts you with the knowledge that you should have known from the moment you heard those children sing, because everything they said turned out to be true.

But even when you heard the song, it was already too late. You had already made the deal. You were on the path, a line at a time, to the time when the stars would expire. 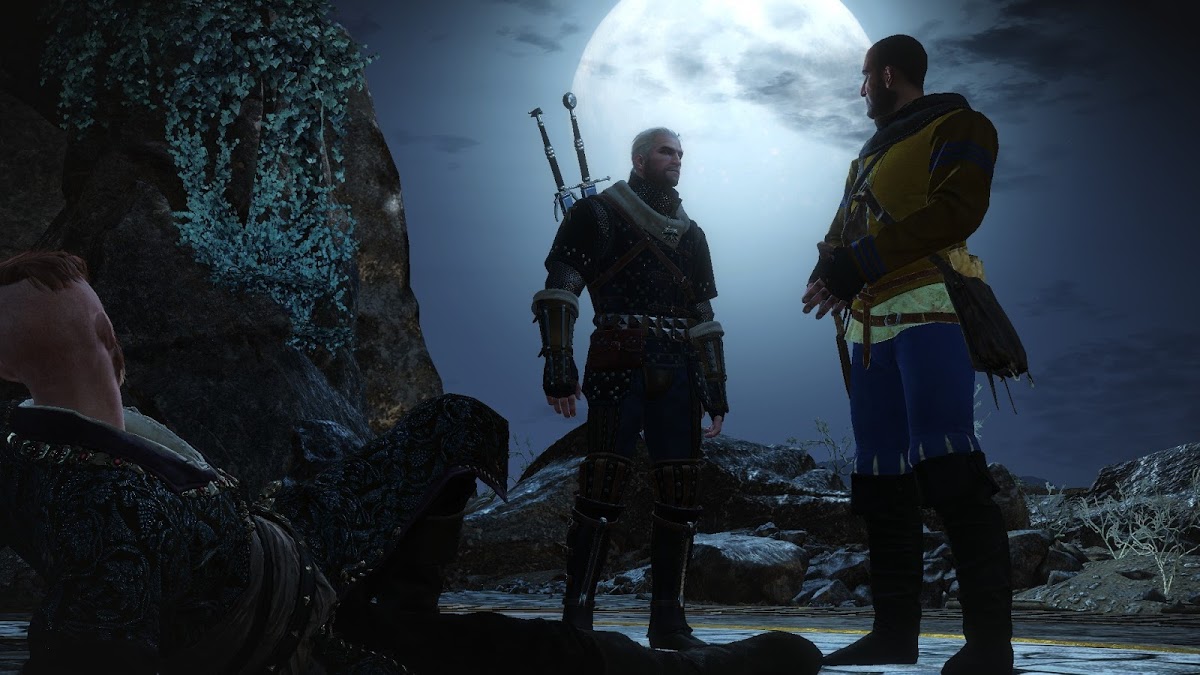 (Thanks for reading! If you want more content like this one, check out my previous installments, looking at Persona 4 and Horizon: Zero Dawn.)