But no, there’s something else. I’ve, for a while now, been fascinated by the Yakuza series. I’ve never really tried it (outside briefly trying 2 on an emulator), but they’ve continued to have that “I-should-probably-play-these-at-some-point-because-I’d-probably-like-them”-quality.

And I just delivered my project report for this semester. And it’s Christmas. So I thought, what the heck, I’ll buy myself an early Christmas gift.

And holy hell, I’ve almost done nothing else since. 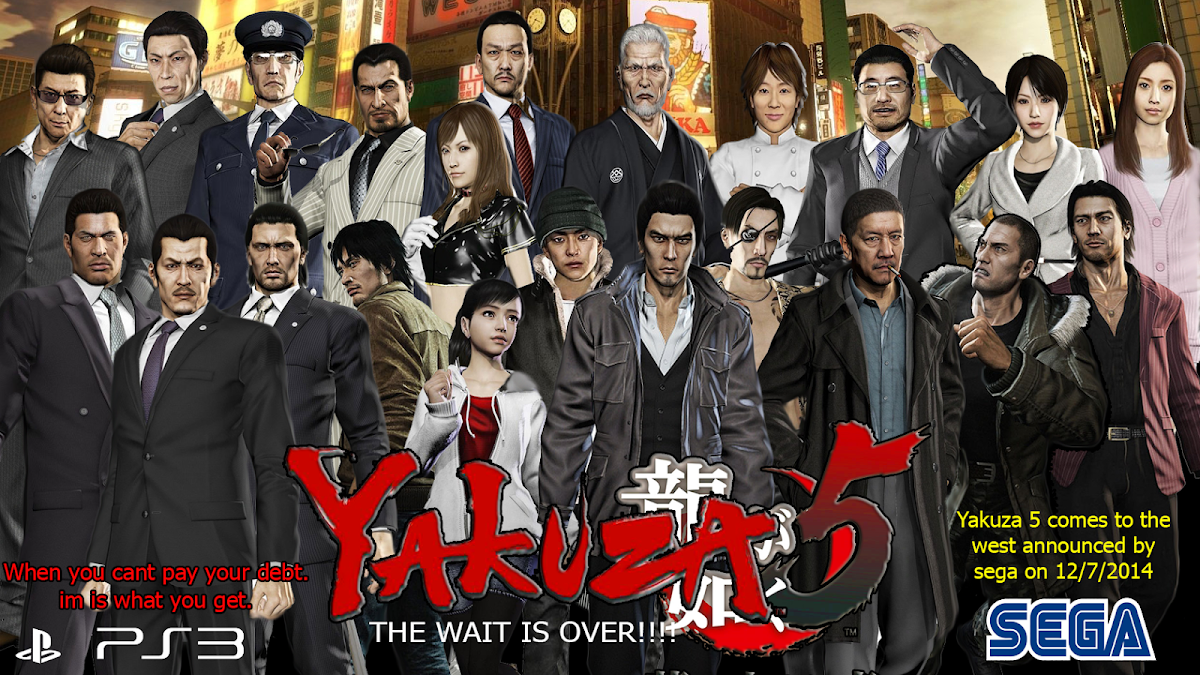 The Cast you'll learn to love or love to hate or whatever in between.

Explaining why, though, is going to be a little difficult.

Yakuza 5 is a pseudo-open world action game about being a yakuza (Japanese mobster). You run around, beat up people of other gangs, do errands for mafia bosses and whatever else you want. That sounds like GTA?

Well, yes, but no. It isn’t really like GTA. It’s more like… I don’t really know what else it’s more like… Persona? Sure, a little bit. Just not with high school kids but with badass mafia people instead. But let me instead describe a typical day in Yakuza.

I haven't even seen this character yet. No idea who he is. But he seems important?

First, I wake up and go to work. In the beginning of the game I play as the main character Kazuma Kiryu (I know there are more), who works as a taxi-chauffeur in a small little town of Nagasugai. (Plot twist: He’s an old Yakuza boss, but now retired. The old games are about his previous life.). You then go and be a taxi-driver for a while, picking up passengers, driving them around (Following traffic laws! Otherwise the passenger’ll leave), and striking up conversations for a while. After work I might kick back in the office and help them solve a computer problem because they’ve been struck by a virus no one knows how to deal with (Whack the computer! Always).
That dealt with I hit the streets and walk around, get into a few fights with rich bastards and thugs who don’t know who they’re dealing with (I’m a taxi driver! You better be careful!), and I beat them to a pulp and continue walking.

I stumble into a food stall where the guy happens to get back problems just as I order food, and what’s clearly the best option? I of course take over as the noodle cooker! And then I do a whole little Diner minigame where I prepare the noodles to people’s liking without screwing up too much.

Then I maybe go to a hostess club (which is a very Japanese thing) or go take some pictures or hang out with a chef in some restaurant or play Pachinko or Taiko Drum Master(!) in Club Sega. Because yup, it’s got all those things, and probably a lot more I haven’t seen yet. Because this game’s long and big and full of STUFF. 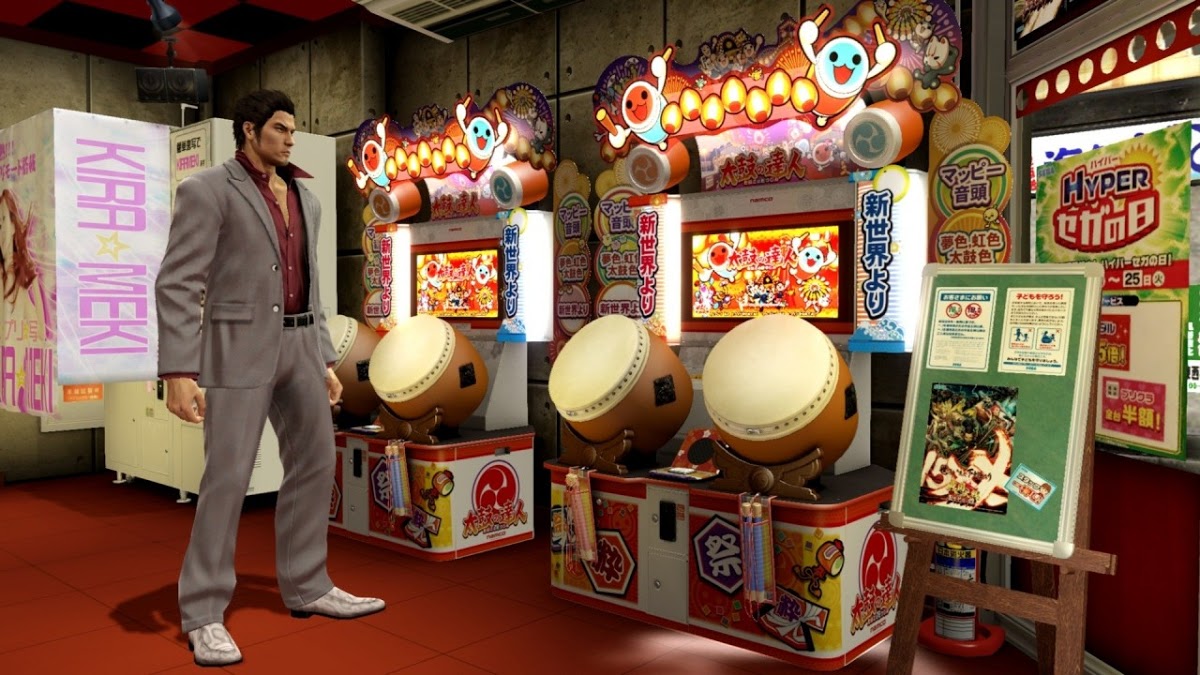 Are YOU ready to become the Drum Master?

Oh yeah, and then I proceed with the story where crazy Yakuza are doing awesome Yakuza things, and backstabbing and behind-the-curtain dealings and explosions and cool ass intrigue. There’s that too. And of course our faithful taxi driver can't stay clean before his past catches up to him. And everything's going wrong. And it’s great. And hella japanese in the best way. 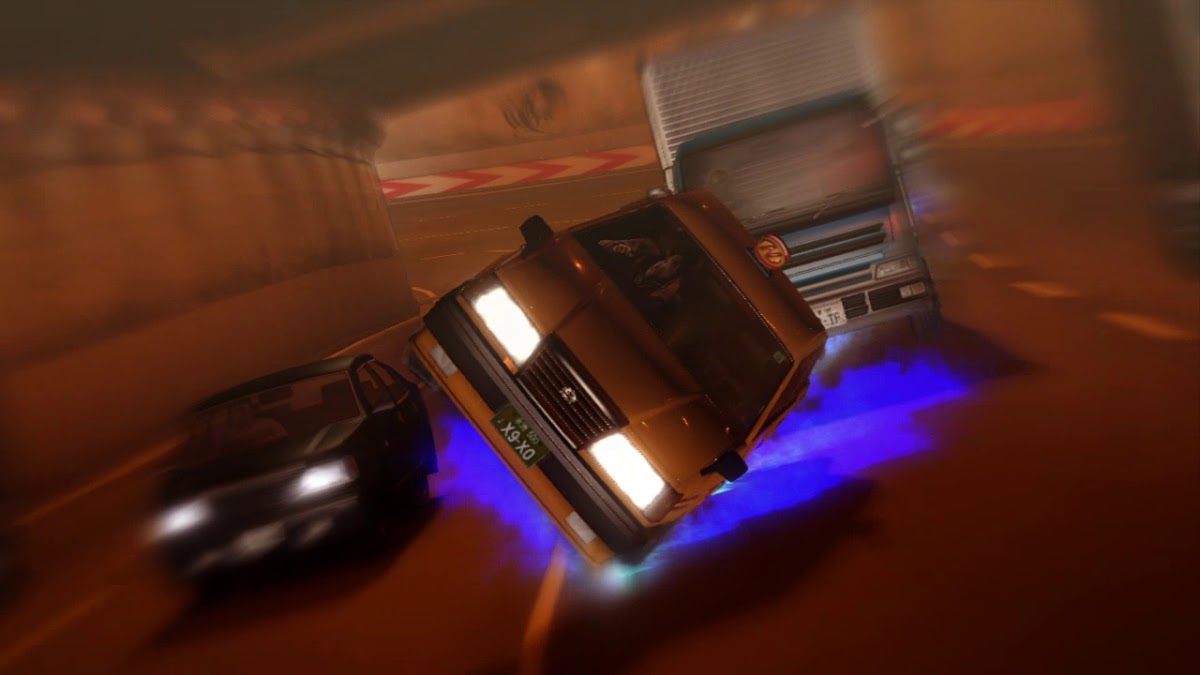 Let me tell you about the time I was racing!

But really, let’s get to the important stuff: Racing.

Normally, racing missions in open world games are the blandest, most lazy, tacked on mission choice in the history of games, and I probably would have never even touched them had it not been for one thing: They actually make the story behind it interesting.
Ok, just listen to this: Not only is there a plot about a cop trying to take down the illegal street racing teams, and you helping him by racing (which, to be honest, is kinda cliché), and not only is there a sweet little side-story about hiring a young wanna-be street-racer for your taxi firm and him learning the ropes of being an adult, and not only is there a plot about another colleague from the racing team who once wanted to get into Formula 1 and being jealous that you’re the one racing, and some slight hints that your boss might be an old street racer as well; THERE’S ALSO a completely different plot about a mysterious gang of female-only racers that you can only meet if you beat them in a race. ALL PROGRESSED THROUGH RACING!

And that’s the kind of thing that Yakuza 5 does really well. It doesn’t always do great storytelling, each individual story is often kinda bad and pandering (and anime) for the most part, there’s just so much and it all has so much charm you can’t help but love it, even when it stumbles. And oh, yeah, the racing controls are not good. Like, this is not a good racing game. But…
It’s just so… endearing. That all I want to do right now is see what happens next.

Oh, yeah, and also, when the races include sillyawesome stuff like THIS how can you not love it!?

Man that is so dumb. The best. 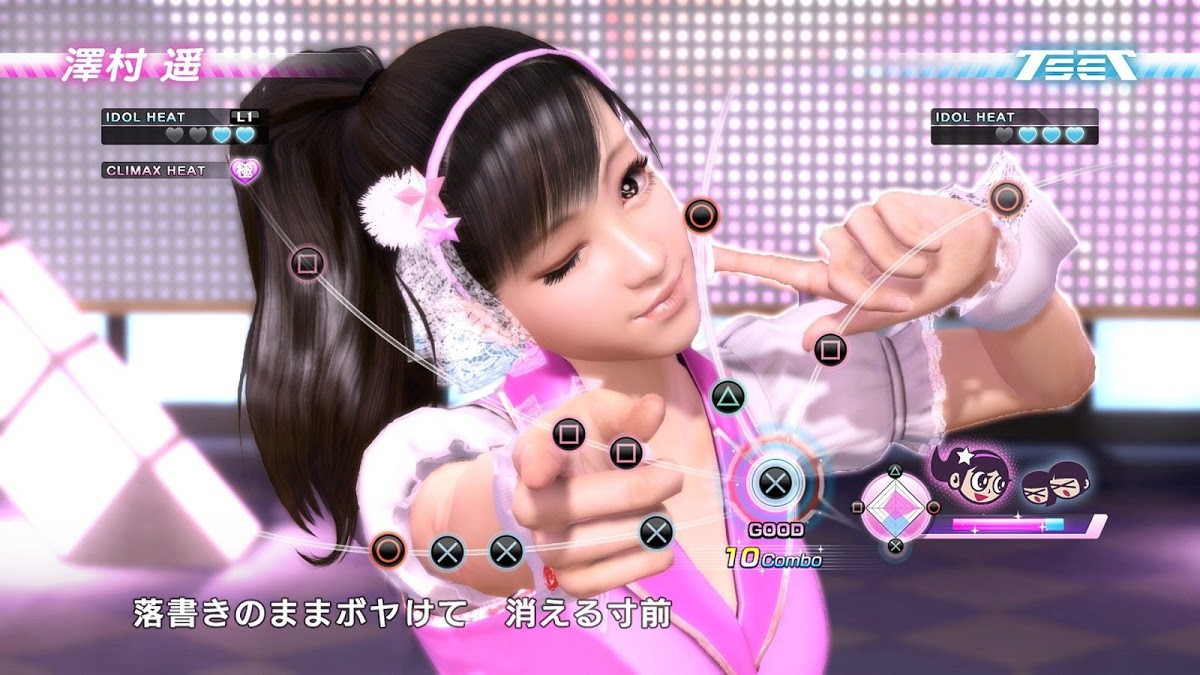 I'm led to believe that this is ALSO somehow a part of this game. I believe it.

So, now I’ve got this damn Eurodance track stuck in my head. And it’s kinda maybe not bad? I really couldn’t care less about Eurodance but this thing’s just gotten addicting at this point. I mean, I went so far as to find it on youtube! That’s how deep this goes already! Fuck.

Yes. Yakuza 5 is pretty great so far. I’m really enjoying it. Not entirely for the reasons I thought I would, but hey, I’m glad to be surprised!

I'm not sure I've convinced anyone why these games are any good, but hopefully my enthusiasm shone through a little. Now, excuse me while I go race those bloody street racers into the ground.