[So I did another one of these. I kind of use them as a stream of conciousness reflection on my decisions, which is super helpful for me, but perhaps not the most riveting content. I hope it is at least somewhat interesting to read. If not, sorry!]

So, I changed the function of the walls. They can now only be placed to the right of the black diagonal line in the middle. This means you cannot use them defensively (at least directly). 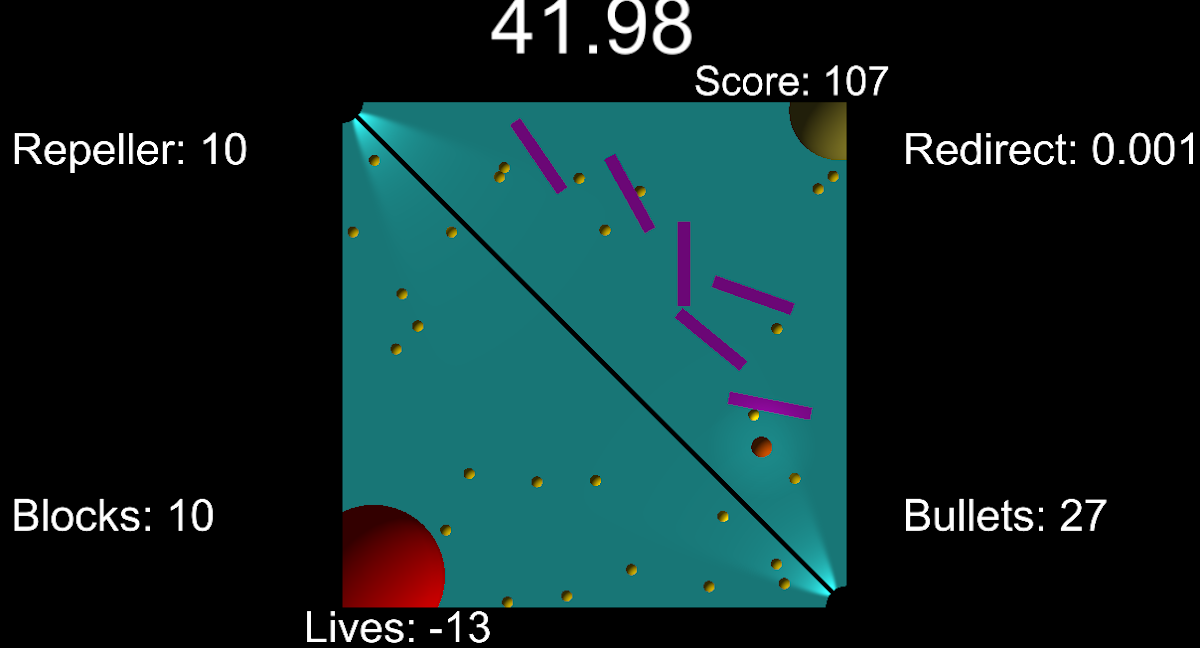 I've started to codename this RBRB because of the ability names. I also changed the look. This darker look feels way better.

This has a couple of interesting implications.

First, it makes it way more interesting to use them, because the choice of where to put a wall is not as immediately obvious. Do you put it further out, where it is easier to trap more bullets, or further in where more bounces will happen, scoring more points?

Furthermore it forces the player to move away from the left side of the screen, which I was looking for a way to do.

Finally, it creates an interesting dynamic with the redirect, because, used badly, you are now just redirecting the bullets into the walls. However, if you redirect first and quickly place a couple of walls fast you can trap a lot of the bullets. This is pretty difficult, though, which I'm fine with, since it's pretty powerful.

However, this wall decision obviously has one major change in balance: It makes the game WAY harder. Where I before could get around 170ish points before I lost I now get around 70, simply because I can't effectively defend as well.

And I feel that in general, once you get up to 20-30 bullets, it becomes unmanagable, because right now there is only one truly (reliable) defensive option: The repeller. However, this cannot be used everywhere, and has a cooldown.

I could remove the cooldown period for the repeller, but that wouldn't fix the problem anyway, since it cannot repel when bullets are coming from multiple directions at the same time. Besides, I do want some other way to manage defenses.

As I said earlier, I already feel like this game is getting complicated enough, so I don't want to add more abilities. 4 abilities also fit really well on a controller (using the 4 shoulder buttons), so I want to stick with that for now.

So let's look at the them:

- Repel I already mentioned. It is fine but I want to offer another option.

- Redirect works well as it does right now. I might be able to change this somehow, but it's difficult, since it works in a pretty strict way right now.

- Shooting bullets would be tricky to make defensive. You might be able to add something like every time you shoot a bullet something happens, but... I don't know what that should be. Or maybe every three second you don't shoot a bullet something positive happens.. To enforce the incessant, slow shooting of bullets instead of spraying. Seems sort of arbitrary, though. Not sure.

- Placing blocks is the one I changed, so changing this to be more defensive again sort of misses the point, because I wanted to make the walls offensive. Unless I can figure out a nice way to use them in both ways.

Right now I have 3 offensive abilities and 1 defensive (Although, redirect is kind of both – I use it defensively at least).

So I think I should test the bullet positive cooldown thing, if I can figure out what a good reward would be. But I have no idea how that should work. (I would also need to find some clever way of showing the player this mechanic, but that's pointless until I know if it actually works in the first place.)

Maybe the best idea is just to let the walls be placable anywhere, and scale them depending on position, so they are largest in the middle and small at the corners. The redirect-wall combo might be powerful enough to mitigate the defensive option as the best one... But no. The problem is that since lives are finite, you will always strive to live longer if that is an option, since the score naturally ticks up slowly through bullet interactions. Redirect works because it is also defensive.

I might have to do something entirely different because this is a general game-flow problem and not directly an ability problem, so I should probably think bigger. I'll try that.

Side note: I put placing walls on LT because the two L buttons were defensive, since they were on the left side, mimicking the visuals. I might have to change that now