[Ok, ok. Just to clarify to anyone paying attention: I knew I horribly broke my once-a-week promise, but I think I kinda bit off more than I could chew, and began with an idea that took way longer, then forgot, then some other stuff. But you'll get one this week at least. Might change it to bi-weekly. We'll see.]

The first immediate fact you’re struck with when researching environmental storytelling is that there has really not be done a lot of research on this topic. It’s surprisingly scarce, and almost all theoretical.
The term originates, for gaming purposes, from this gamasutra blog from Don Carson, wherein he explains how games can learn a lot from the environmental storytelling used to create theme parks. Which is absolutely true, and this seems to be one of the earliest instances of the term used in a game context.

Since then, Henry Jenkins has, as one of the other primary sources, taken the concept a step further and integrated into his concept of spatial narratives in video games as a counterpoint to the ludology vs. narratology debate—as a rough summation the idea is that games should not as much focus on telling stories through traditional means seen in other media, but instead lean into what types of storytelling that works well in games.
Here, he lists four different kinds: Evocative Spaces (intertextual references, relations to previous works and aspects seen before), Enacted Stories (what the player does to the environment), Embedded Narratives (roughly what would be called mise-en-scene in movies, what stories the environment tells through clues, hints to previous events etc.), and finally Emergent Narratives (semi-random, systemically created events that create narrative).

What a lot of these have in common is that the story, the actual bringing together of events and what makes the story a connected set of ideas, happens inside the player’s mind—not necessarily as authored by a designer. It can be, and often is through evocative and embedded narratives, a setup that a designer has created for the player to interpret in a certain way (Examples include Gone Home, Dear Esther, Dark Souls). But the designers cannot foresee what is interpreted and how—the player might just miss all the clues. This is taken to the extreme in the emergent narratives, where the designer cannot even foresee what will happen event-by-event (Games like Crusader Kings, GTA, The Sims).

And anyone who’s played a game with heavy environmental storytelling knows this to be true. When you play Gone Home, most of the narrative, what’s been going on in the house while you were gone happens inside your head—not on the screen. The only direct narrative element there is the voice-over narration. Everything else is a series of events (items, signs, whatever you want to call them), that you as a player piece together to create what we then would perceive as a narrative.
Here the narrative has been created by designers. The objects in Gone Home have all been placed to convey a specific narrative—and even though we might be interpreting them differently, the original intent is still there.
Even in more emergent systems, the designers usually have an intent with their systems, and a suspected way things will play out—even though they know that the ultimate power to experience the stories lies with the player.

I couldn’t help but realize, as I drew this out, that this is very similar to the MDA framework. For other people who study games, you might already know this, so I’ll only link it here from reference [LINK], so if you don’t, and have an interest in game design, check that out.

In MDA—AND in environmental storytelling—the designers create a series of events, mechanics, individually constructed objects, designed to (hopefully) interact and, through player input become interesting Dynamics that the player perceives as Aesthetics. So the player is perceiving what is happening through objects and then constructing, mentally, a map of the narrative. 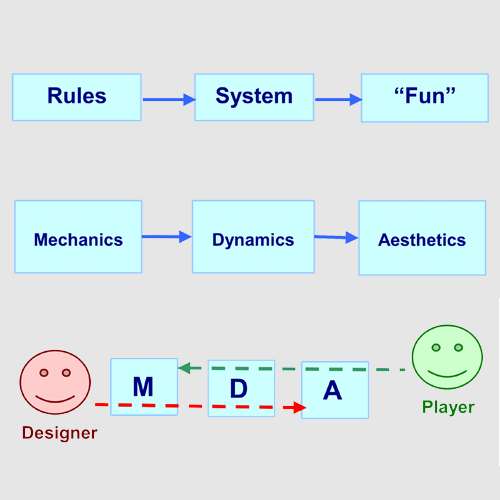 That’s kind of fascinating, that a framework so specifically designed for games and game systems works for this kind of narrative as well.

Thinking about storytelling in these terms has, I think, the huge advantage that we’re no longer forced to distinguish between the story that’s been created by the author (the embedded, evocative ones) and the ones that the player create through interaction (emergent, enacted ones). Yes, there are differences, they shouldn’t be considered as the same, but when you understand that these are all something that, at some level, is constructed inside the player’s head through the events they see on screen, they are understood as closer than I previously saw them at least. They are all Mechanics (understood as events, rules, staging etc.) that lead to Dynamics (correlation, interaction) that lead to an overall Aesthetic (theme, intention, feeling, mood).

What’s fascinating is also that in MDA, the player is seen as approaching the game from the Aesthetic, whereas previously in environmental storytelling, I saw it as something that happened from the individual objects that was then taken into a larger context. However, it’s important to remember that the player doesn’t remember or cling to the specific mechanics—the small events and rules that happen, but instead take away the overall aesthetic… the strokes of the story, the moods, the themes, the feeling it gave them.

I feel like there’s something here. I’m not entirely certain what to do with this knowledge yet, but I feel like I’m getting closer.