I know Nordic Game Jam is probably the bigger one of those two things.
But I know why you’re really here. You here to hear about my mouse story.
So I’ll tell that first.

On Sunday morning, with Nordic Game Jam in full swing, and just before I had to go back to the venue and finish up our game, I tweeted this:

I had no other way to phrase it. I was literally, pretty gobsmacked.

So, let’s rewind a bit. Why was there a mouse in the first place?

You see, for reasons I was at my parents’ house, and they were out, because they were in their summerhouse up in the northern part of Sjælland. So I was alone in their house. And they had, the last week or so, had some problems with mice, going in and eating from their bread-drawers. Packets of muesli, nougat etc. torn open and eaten by little critters.

So, they emptied the drawers and put down some mouse traps. And caught one a couple of days before Nordic Game Jam. But it wasn’t enough, as another one apparently came and did the same again.
So the mouse traps were back on that Sunday morning.

I’m tired, running on a total of 7 hours of sleep since Friday. I take a shower and begin cutting some bread for breakfast, and hear a rumble. From the drawer.

I pause. Wait. Either the mouse is dead, or it is not there at all. Nothing in there should rumble.

I open up and sure enough, in the bottom drawer is a mouse in a trap, lying very still. I’m a bit unsure what to do about it, but I leave it be. My parents will be home within the next six hours or so and they’ll know what to do with it.

So I close the drawer again.

I pause. Stare at the drawer. It was definitely from inside.

I open the drawer up again and look at the mouse. Looks dead. Still.

I shake the drawer and the mouse springs to life, rustling around, very much alive.

Remember that it is inside the trap. Its head is halfway stuck in there. It probably can’t see anything. And what’s worse, its foot is stuck in another trap. It was literally caught by both traps in there. It writhes, but fights fruitlessly against the trap.

It stops moving again when it realizes that, yes, it still can’t get out.
I stop moving too, and stare at it.

What the hell do I do?

I need to… kill it my brain tells me. Can’t leave it alive here for six hours. That’s just cruel. The trap should’ve killed it. It needs to be put out of its misery.

So, next question: How the hell do you kill a mouse?

Turns out, not as easy as you may think, and right there, in my half asleep, half panicked state, I sure had no idea.
Ok.
So, I grab some paper towel and fumble above it for a few seconds, gathering strength for what I’m about to do.

I grab the mouse with the paper towel, wrapping around it, lifting it and both traps up. Then with the other hand, also with paper towel, I try to snap its neck.
Try being the operating word.

It’s not so easy to snap the neck of a mouse. As soon as I picked it up, it began writhing in panic, twisting itself in and out. I could feel its softness, the flesh and fur as if going straight through the paper towel. Imagine trying to rip apart a lump of meat with your hands. Now imagine that lump of meat having feet and a mouth and fur and it writhing around as if it was very much alive.
I pulled its head up and down. I definitely broke a few bones. I heard them crack around in there. But it kept moving and slithering in my hands.
Panicking, and more than a little stressed, I grabbed for a cutting board (that name’s never felt more appropriate), and a knife, and put the mouse on it.

And in one motion, without barely thinking, I chopped its head off.

Two pieces of mouse laid on the table.
Very much dead.

Both in each their own mousetrap, neither of which had not done its job.

I… I took a step back and just stared.

What the hell did I just do?

My mind was pulsing. I could barely process it.
I have never felt anything like what I felt right after that.
I felt terrified. And shocked. And sad. And broken.
And—to steal a quote from Ally McBeal [!??]—regardless how medieval it may sound, it felt powerful. It was a mix of terror and power. Terror that I just killed a living creature, and power that I could.
Power that makes you understand why people can do terrible things. And yet, power that makes you feel pity for mice. It was the strangest thing to stand there, with the feeling that I could do anything in the world, and terrified at the prospect that this was how it could be done.

Don’t get me wrong, it was fucking unpleasant.

But the discomfort came partly because of my own terror at myself.
What am I capable of?
There was surprisingly little blood. It did not even cross my mind that there would be blood until afterwards (thank god, otherwise that might’ve been much harder), but afterwards, staring at it, I realized that the tiny splatter of blood on the cutting board, and the few droplets on the knife was far less blood than I would have imagined.

I wrapped the tiny creature up in all that left-over paper towel and walked it out to the trash. And threw it out, like any common garbage.

And then it was gone. A little bloodstain on the cutting board its only mark. It was harder to wash away than I thought, but I managed, with some soap and some good rubbing.

I slowly gathered myself and began to process it and began to think through these things. Began to notice the feelings well up and roam in me, until I settled down and realized that I never wanted to do it again.

And then I went back and finished up a video game.
At Nordic Game Jam 2017. 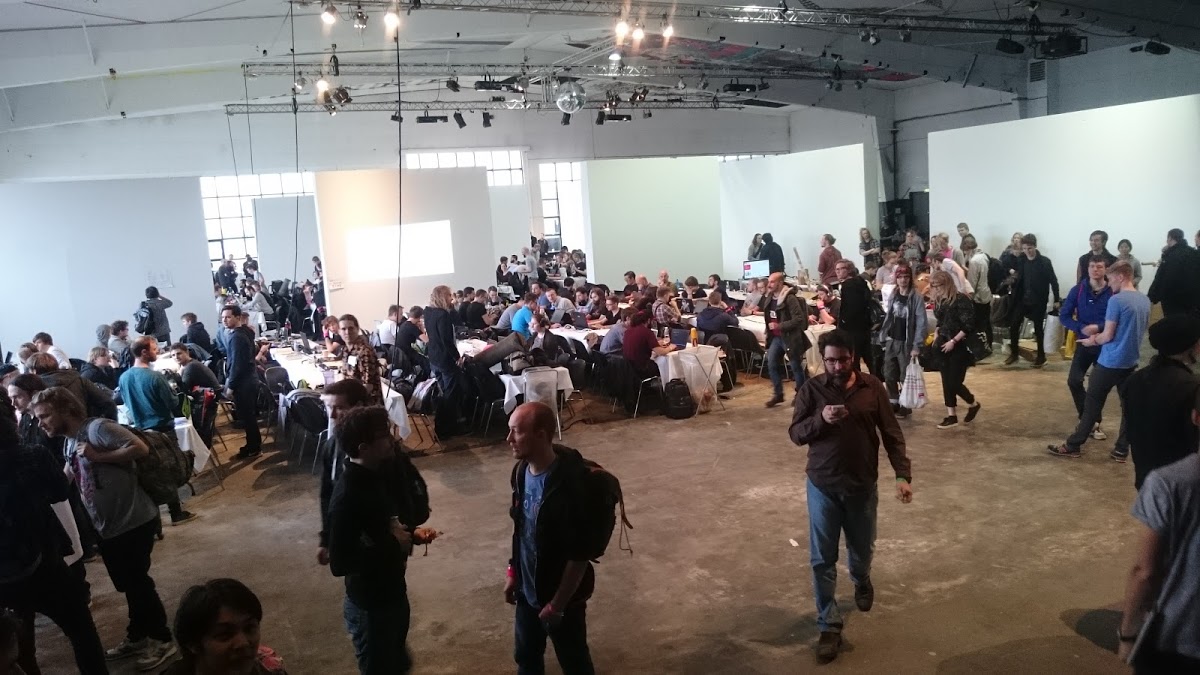 I won’t spend a ton of time on it, I just wanted to share a few thoughts here at the end. While you’re still processing that.

I wasn’t fully sure I would be joining NGJ this year, but since I won (!) at Global Game Jam at ITU in Copenhagen, we were all awarded free tickets to Nordic, sooo it was a pretty easy decision, then.

The jam itself was very different than the other years, for several reasons. New management and a new venue meant that almost everything was scrapped and redone, which was not without its issues. There were some problems, and some disadvantages to the new place compared to the old (and hey, I’m slightly biased too, as the old place was literally my school), but overall, the jam was still good fun, as it always is.

My jam experience was different as well, as this was the first time we didn’t manage to finish our original idea.
The theme was “Not there”, and me and a couple of other people came to the idea of a murder mystery where one player plays as the police officer, one player plays as the accused. They would each receive an unfinished set of clues, and their goal was then, for the police officer to find the truth and convict the accused if they were guilty, and for the accused, to not get accused no matter what. Whether the accused was actually guilty would be random, and decided by the game.
And from that came the tricky part, because we wanted to use some randomness in how the case worked, so it was possible to replay it with different outcomes, and different murders.

I was aware this was a pretty big task, but we had hoped we could make it vague enough—and non-sensical enough, that people would infer their own stories onto some randomly generated clues (within boundaries) instead of constructing all the logic within the game.

However, that didn’t fully work out. We realized, that when we did it too randomly, there would be too little for the players to latch on to, and the police officer especially, had no idea how to approach asking the accused questions.

This realization came on Saturday evening, when many of the other systems, such as the graphical interface that should slowly reveal itself over time, was not implemented at all.

So, on Saturday evening, at around 6’o’clock, 19 hours before deadline, we completely scrapped the idea.

Looking back on it, I think it was the right decision. The idea it cool, we all agreed it was, and still do. But for a jam, it was a very difficult idea to execute on.

None of us had ever made something like it before, and we spent a long time purely figuring out what the gameplay even was. It was ambitious, and it might have worked, but it would require us to have a much more concrete idea on how exactly to implement it, which took us too long, and we never really got there.

So, 18 hours left, we had to come up with a new idea, really quickly. 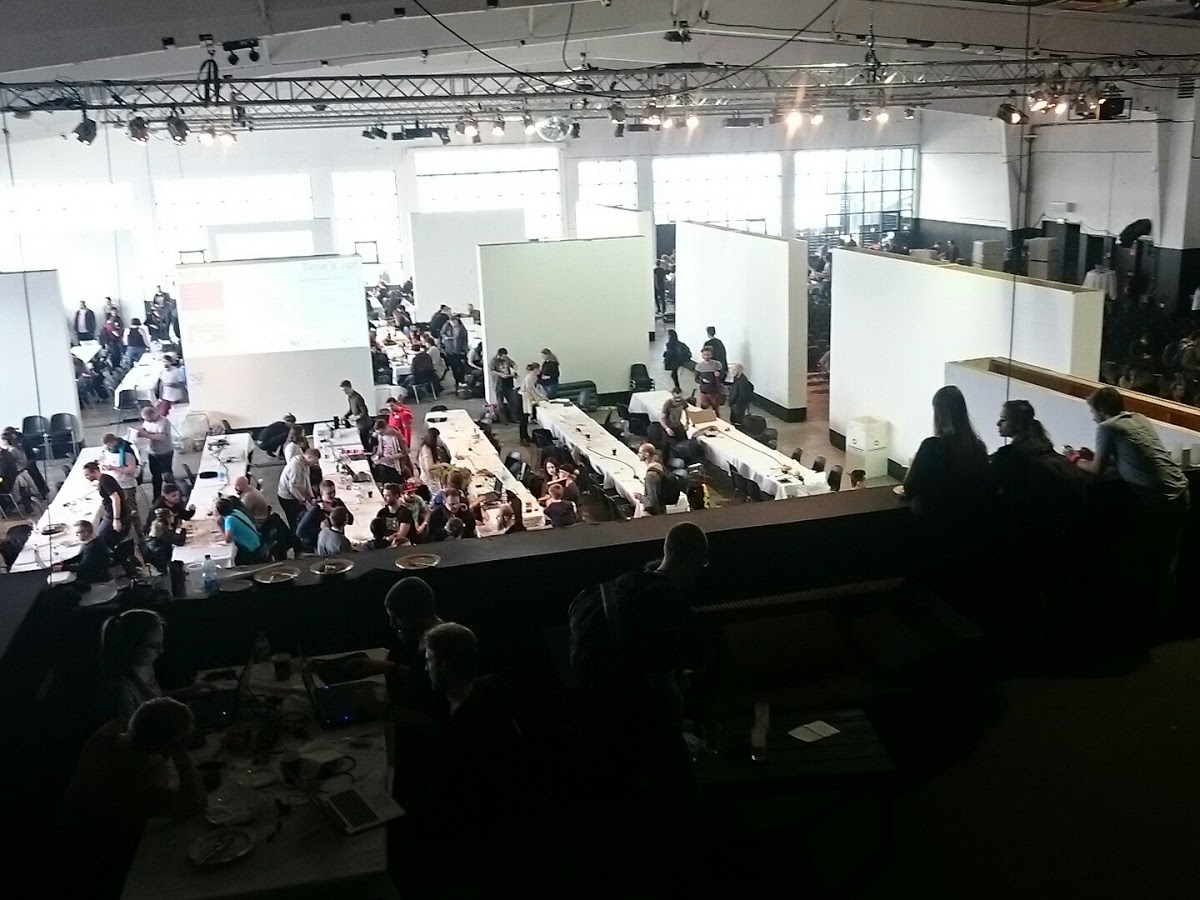 We did, and we managed to make a finished, functional game, for Sunday morning. This game was much simpler. It was a 4-player competitive platformer, where each player could only see one color (and black), and the platforms they had to jump on were different colors.

So if player one could see red, and player 2 blue, and in front of them were a red and blue platform, player one could only see the red one, and so on. So player 1 would here have to rely on player 2 to land on what they could only see as air, to see that there was a platform there, and they could jump further.
This, with four people, and four colors, split 4 parts on the screen becomes very hectic very quickly. That, and adding a bunch of image effects, bloom, glitches, particle effects etc, and the game is pretty inscrutable and difficult to understand.

We sort of did this on purpose to give it a look, but it, in hindsight is probably not very clear to understand as an onlooker.

But hey, we managed to finish a game in less than half the jam time, so I’m fairly happy with the result. We learned something. And that's really why we're doing it, eh?

If you’re interested, you can play the game here [LINK], but it requires 4 controllers (it will work with less, though, the camera’s just doesn’t change).