Back from Mexico, you go up to your employers for what you hope is one final job. A final stop before you can reunite with your family. You didn’t expect them to want you to ride in a car to get there.

Red Dead Redemption II is out in two days and I wanted to get this post out before then, so here goes. This is about one of my favourite moments in Red Dead Redemption: The Car Ride.
Red Dead Redemption is a western game developed by Rockstar and released in 2010, about a man trying to reunite with his family. And it was a game with its fair share of quiet moments that all feel right at home in a feature like this, and I did consider some others of them, like the actual reunification with the family and the ensuing farm-work, or the entrance into Mexico which many remember fondly, or just the many quiet moments out in the wilderness with nothing but your horse and a beautiful skyline and tremendous music.

But what I want to talk about is a moment I’ve heard no one mention, and it’s a moment that left a huge impact on me because of how starkly it told the themes of Red Dead Redemption in a single moment:
It’s mission 42 and it’s called Bear One Another’s Burdens, and it’s about riding in a car.
Yes. Riding a car. In a western. Not the thing you’d immediately associate with a cowboying and rootin’n’tootin’. And also not the thing you’d associate with a quiet moment. But the reason this moment works so well is exactly because it is uneventful.
See, cars in the wild west… sucked.
They were bad. And slow. And impractical. And noisy. And prone to breaking.
Let me set it all up: 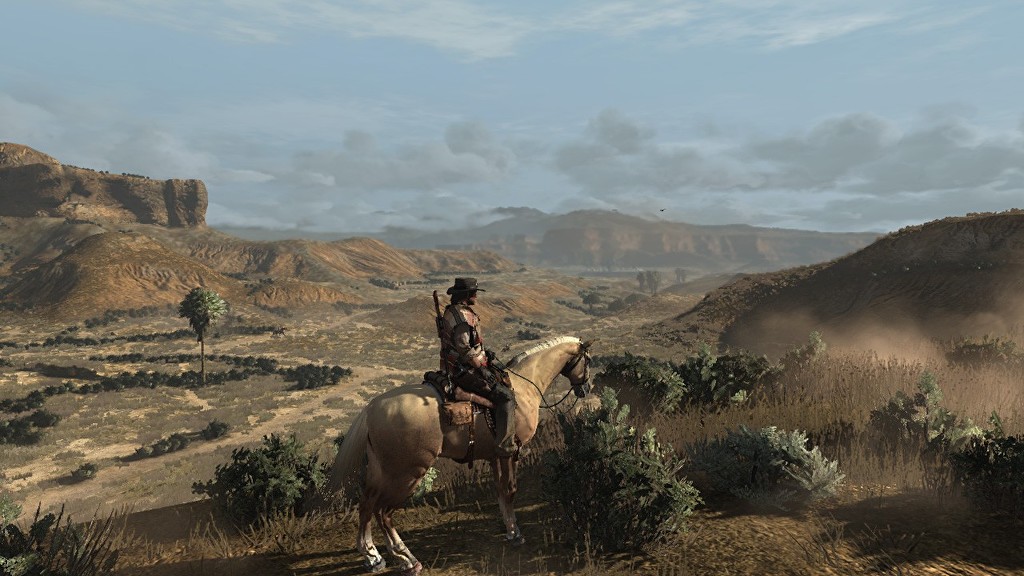 It's a bit dated at this point, but this was real pretty back in 2010.

As mentioned, Red Dead (I’m shortening the title from here on) is a game about John Marston and his quest to find his family. He’s an old bandit, retired and jailed and now on the path to leading a better life. But before he can do that he wants to reunite with his family, but the government, those who imprisoned John, who knows where his family is, won’t tell him until he’s helped round up his old gang-members who are still present and dangerous in the world. And that’s most of the game, roaming the land to find the ghosts you left behind, and it’s a long journey that takes you across the west, to Mexico and back, to where we are now: The Car.
John Marston has just returned to America from a trip to Mexico with two of the gang-members as promised, and now hopes the government will deliver what they promised. The government is here personified through Edgar Ross, a real scumbag of an official who thinks nothing of John except as a lousy criminal and a tool to find more of them.
He has no intent on delivering John his family until he’s helped find the leader of the gang, and so, John must go at it again, and find an informant they think knows where the gang leader is.

The game takes place in 1911, at the tail end of the “Wild West” and the story takes us around to see how this old, dying way of life is overtaken by civilization, by cities and trains and telegrams and government. And the utmost American of technologies: The car.
Edgar and his lackey decide to take John in this latest fashion, the car, to the place, instead of riding on horseback as is John’s—and the player’s—preferred method.
The player has spent the entire game on horseback. When not on foot, they called their horse and rode across the land. And this game has some great horse mechanics, and they are fun to ride, fast, nimble, and the complete opposite of the car John is about to step into. 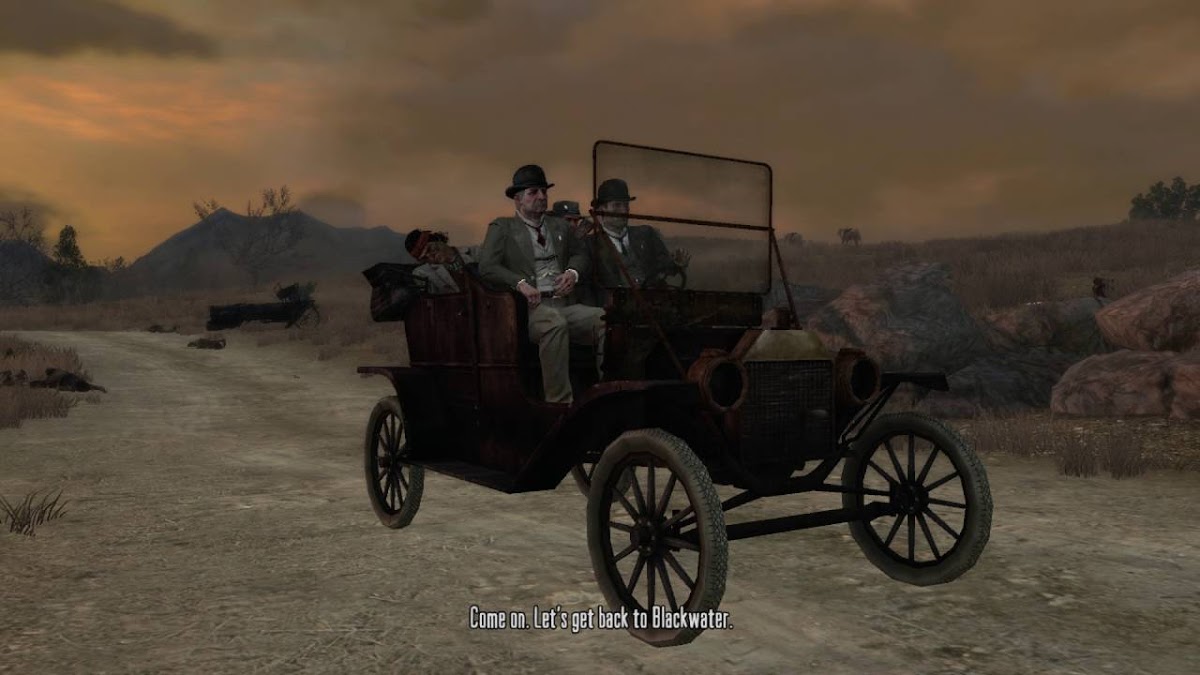 Look at that monstrosity.
It’s big and black and clunky and stutters and is uncomfortable (John says so, at least). And most importantly, it’s slow. It jaunts along the road in a bumbly pace that we cannot stop comparing to the walking of a horse, rather than the running.
And John sits in the back, with no control (important!), with nothing to do than sit and stare at this piece of metal grinding across the dirt.

It… sucks. It’s not fun. John is sitting with people he despises in this awful piece of equipment he doesn’t like and the player feels every inch of that because we have no desire to be there. If the Edgar Ross would let us, we’d take our horse and be done in half the time and it’d be far more enjoyable. We’d have control.
And we know this. And can do nothing about the fact that there are only more cars coming.
And this is why the car moment works so well. It shows us the end of the west as John knows it in a single moment. John is, as Edgar Ross says “a dying breed” of a cowboy, someone who’s no longer needed in an increasingly civilising society. In a society with cars, cowboys have nothing to do. In a country with cross-country highways, horses are useless.
But we see the ending of the west from that which is made obsolete. We follow John Marston as he sees himself being made superfluous. He sees a world he doesn’t understand.

Here's the full mission. Anchored the video from when the car fun begins.

On the way back from getting the informant (which goes wrong, but that’s beside the point), the car breaks down. It sputters and oozes black smoke and stalls on the road.
The player has never, despite difficulties taming horses, never had one break (which, granted, is a video-gamey-trick-solution, but it works for the story) (to be fair, they can die). Yet now, at the very peak of modern invention, he’s sitting like a duck in a metal box that the government lackey must go out and repair before they can move on. 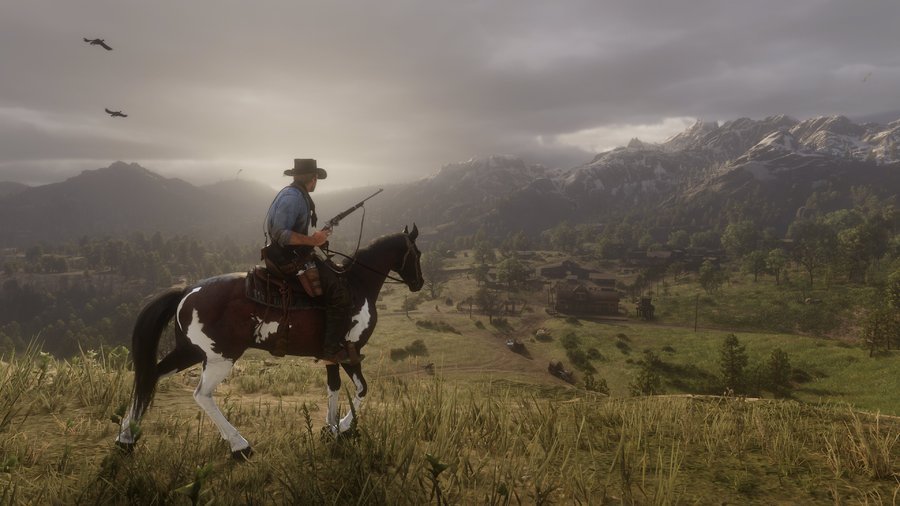 Preview image of Red Dead 2. We have no idea if the game'll look like this.

And remember, we, the player, have no control over any of this. We don’t ride the car (the way we do in Rockstar’s modern games, to draw that very direct parallel), we don’t fix it when it breaks, and we don’t choose where it goes.
Compared to the freedom we feel when we’re on a horse, out in the wilderness, with mountains to explore and a large world to inhabit, this is so stark a contrast.
It’s story through loss of control. A trick games have pulled many times, but here I think it works well. The player just can’t wait to get out of this damn machine and back out into the wilds and live like the dying breed they are.
And while it is not handled with subtlety (it is a Rockstar game), it is a remarkable idea to use a car for this purpose.

I mentioned before how the car is a most American of technology. It’s freedom. It’s driving across the empty Nevada desert with nothing on your mind other than the road and the endless space (read: opportunity) around you. This is the car the way it was sold after the Wild West. This is the American Dream of the car.
So here, we have the actual cowboy (which is where that ideal of American freedom comes from) and they flip the car on its head: It is not freedom here, but a cage. An execution of all that we hold dear. To those who were truly free, the game says, the car was poison. Civilization is a death sentence.
I doubt the game is being nostalgic here. I don’t think they’re advocating that it was “better” back in the Wild West—plenty of bad happened back then too, and the game doesn’t shy away from the problems of absolute freedom. But by criticizing the progression as well, it stands with scathing criticism, as if saying “you’re both wrong”. John Marston want’s nothing to do with the future and the government wants to clean up the past and make it look like it never happened. 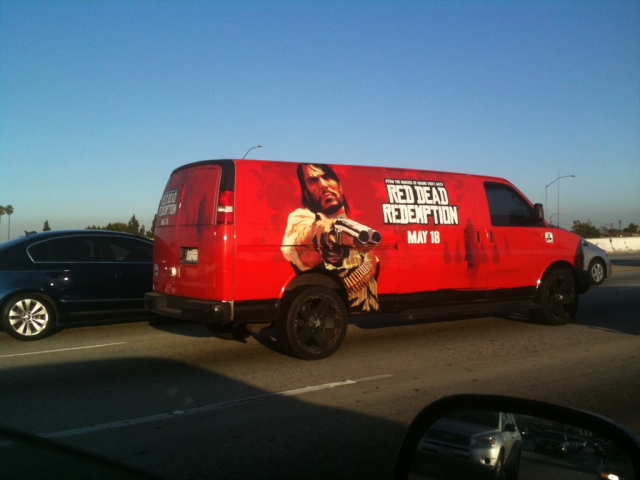 This is where we are now.

Hope you enjoyed reading it! If you want more of this kind of stuff, I wrote a piece about the Quietest Moment In Persona 4, a Children's Song in The Witcher 3, That Time Aloy Shivered and The Last Word in the Last of Us. (This list is becoming long)