Last time, we got some eggs and awoke a turtle from its slumber, only to have it sail us to a mysterious, unknown place I don't know where is, and the other people who tried to get there got swallowed up in a tornado.

Hey, turtle, can you explain where we are again? 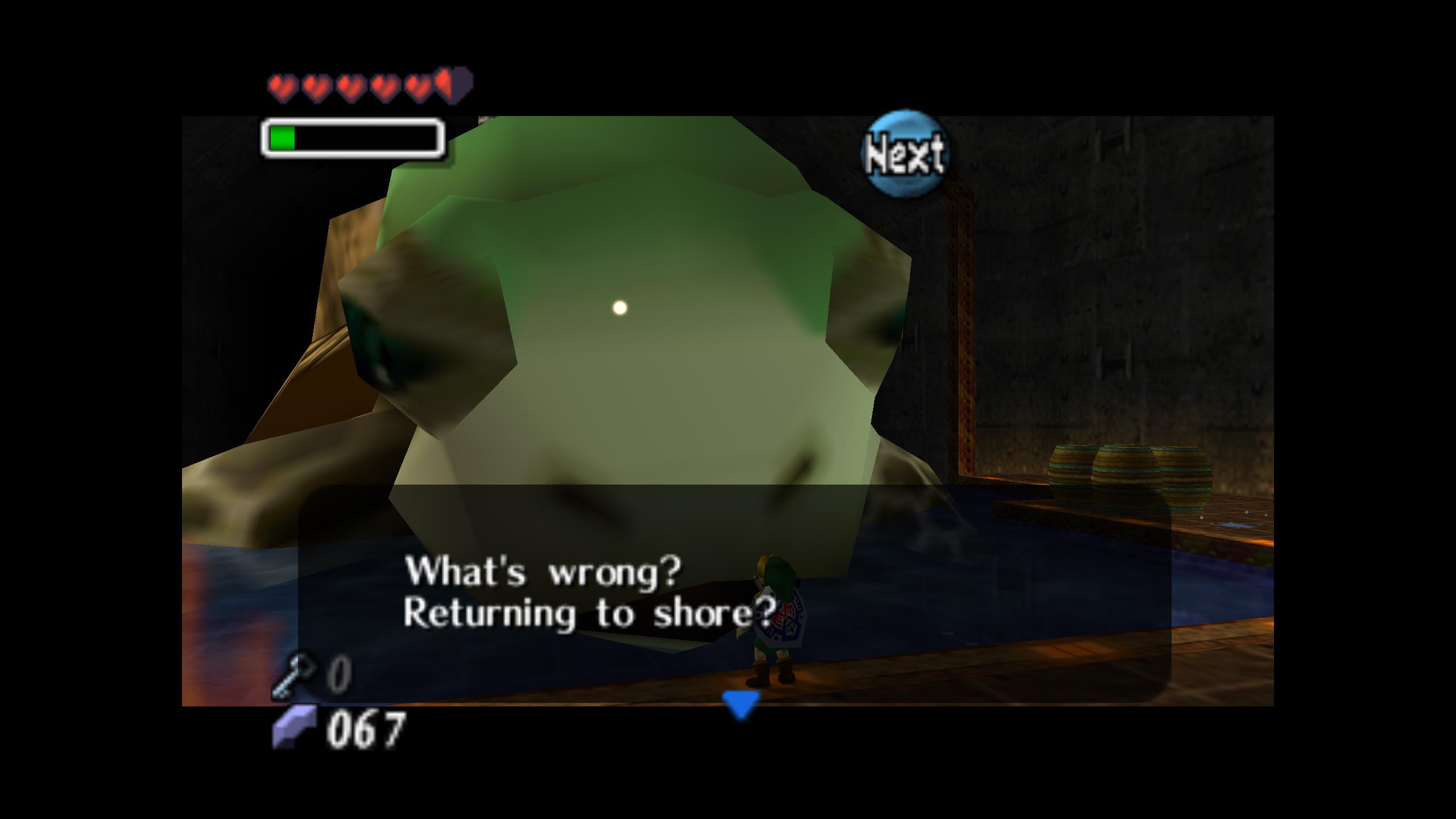 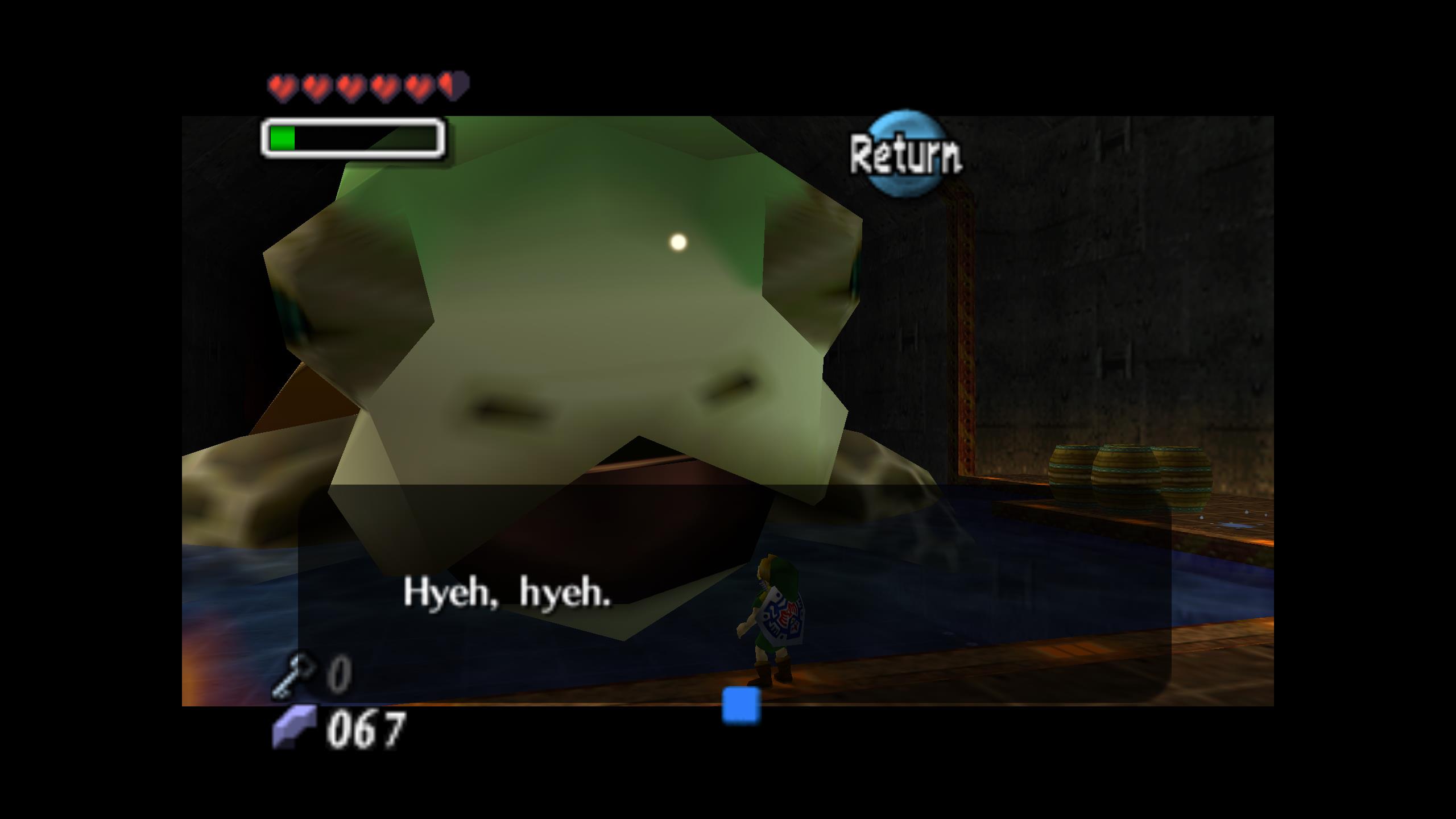 What's that creepy laugh about. I thought I had escaped Dark Souls. 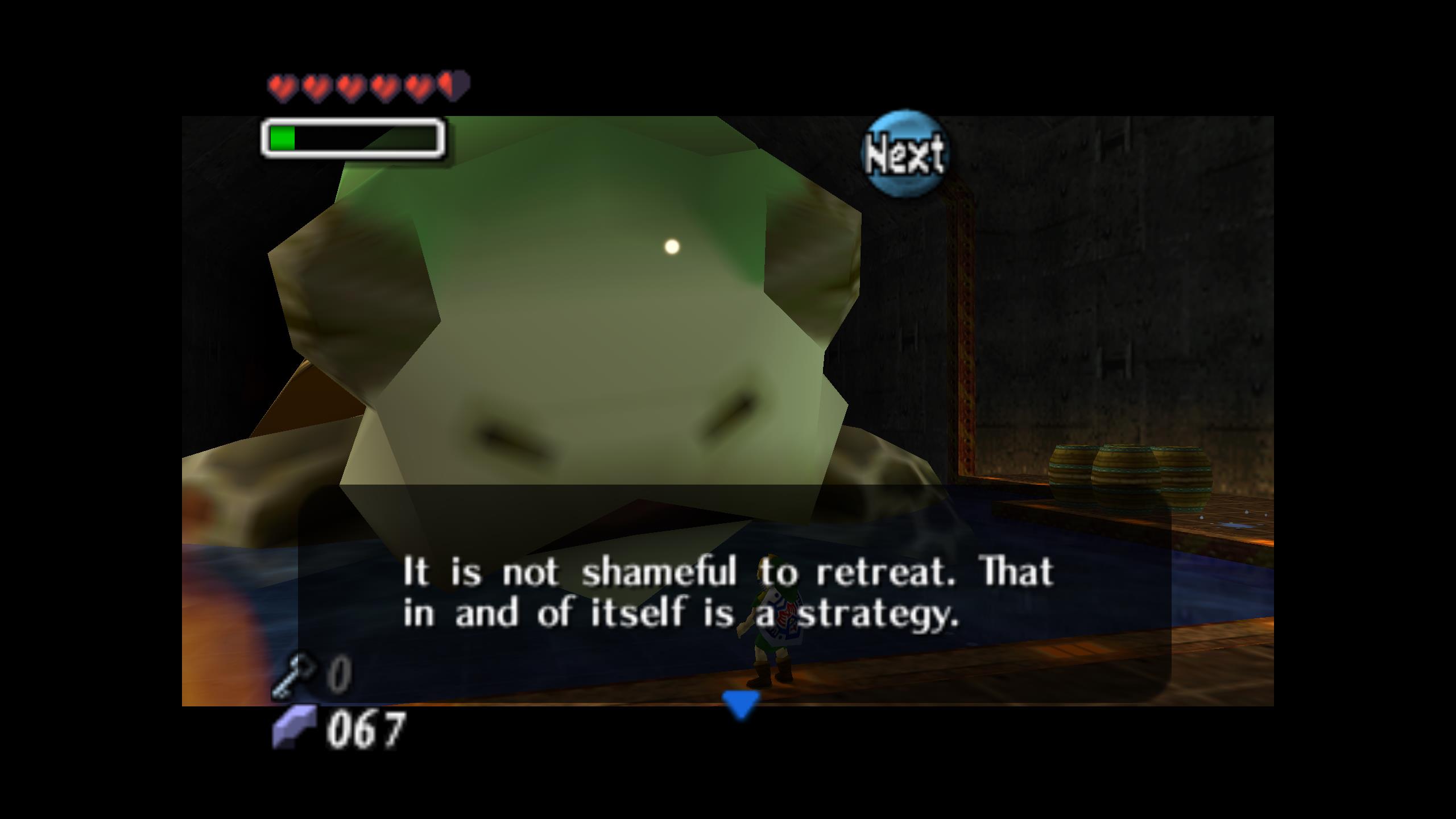 Well. I guess the only way is forward. Cause ain't no way I'm retreating. We don't call Link a Courageous Motherfucker for nothing. Dangerous buildings in the ocean, wild turtle rides, tornadoes, throw it all at me. I'm ready. 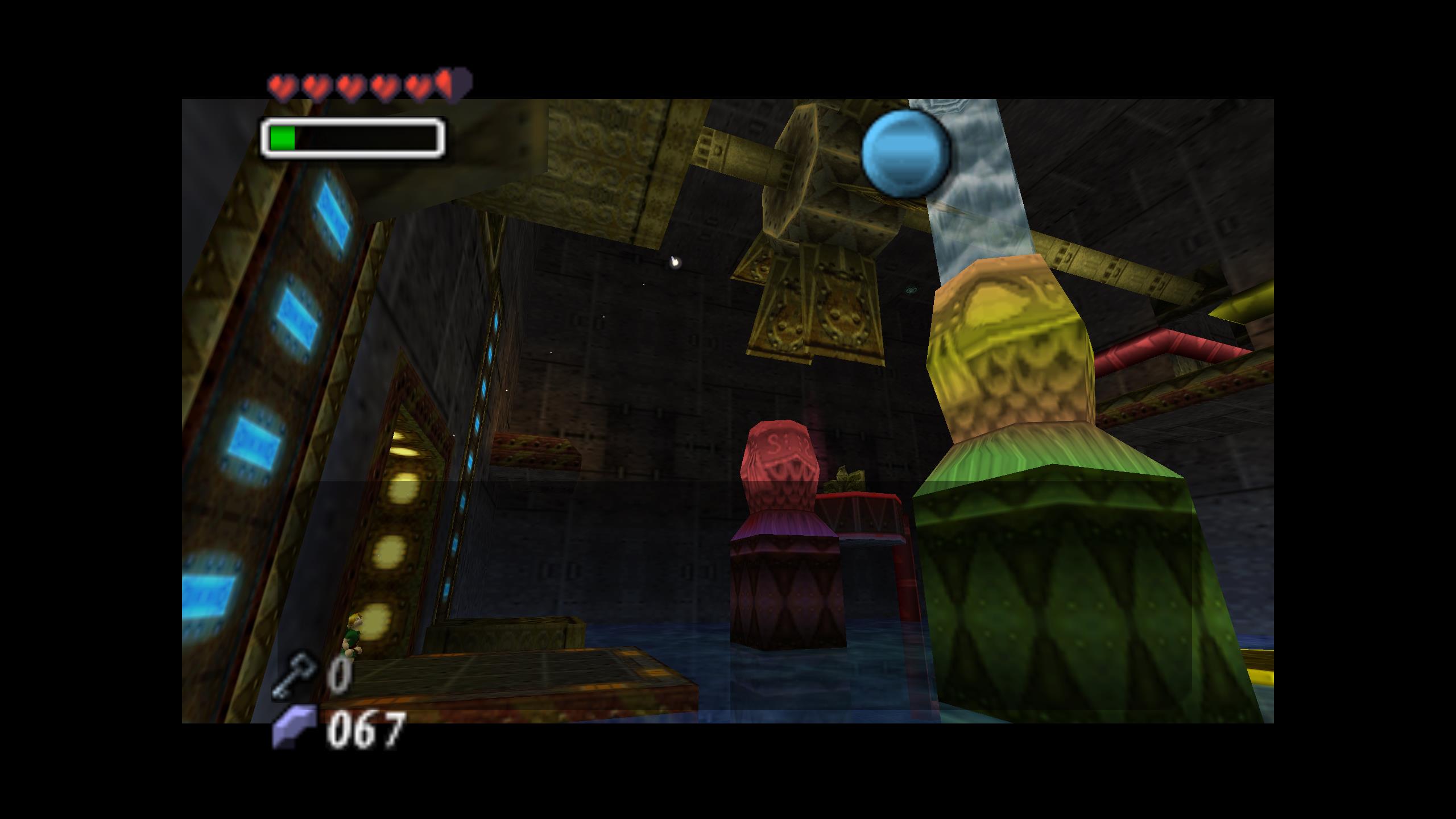 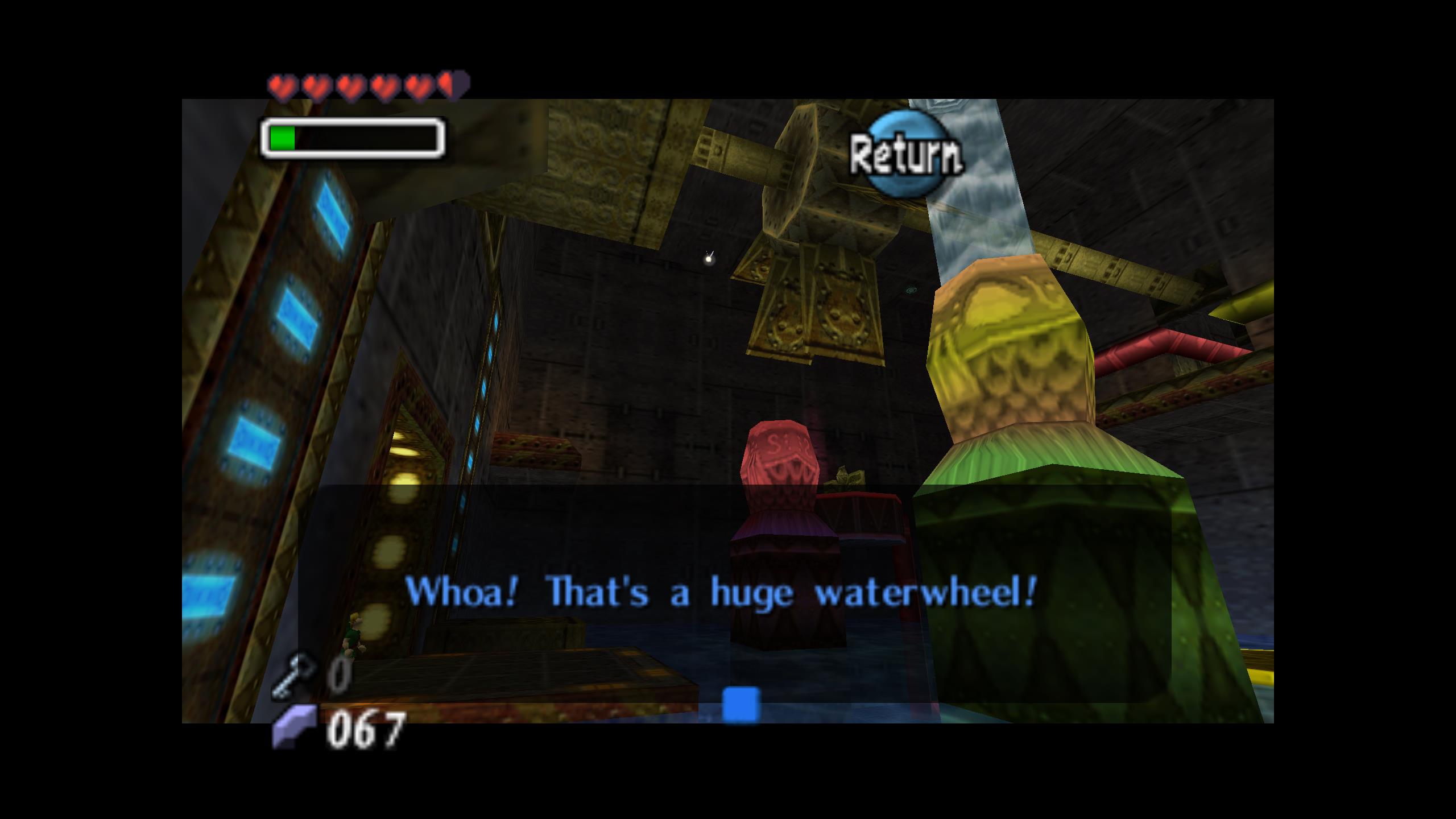 Oh no. I take it back. I remembered I have... some... pots I need to smash. Back in Kokiri Forest. Zelda probably misses me. Yeah, I better... she's worried sick I bet. I haven't even written her a letter. In... 3 days? Oh right, time travel.

I guess it has only been 3 days. Huh. (Does Link age?? Actually we know he does.)

Actually, on second thought, Link knows that going back to Zelda is far more difficult than whatever this Fake Water Temple can throw at him, so it's time to...

Temple. At first there's a bit of platforming and a great reunion with our favourite friend, Water Elevator: 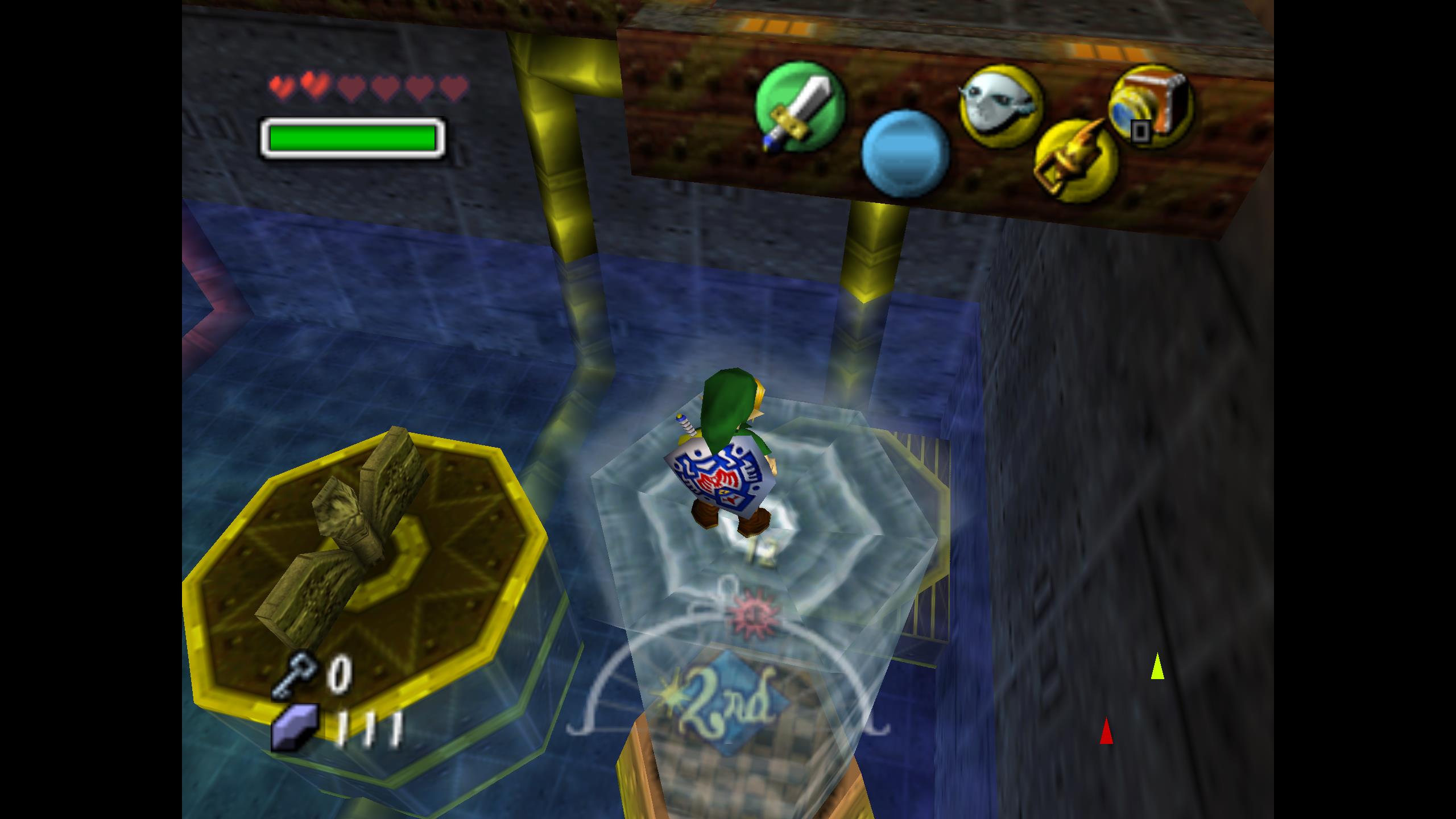 Lava Elevator's distant cousin. Bet they have some great barbeques. They should invite me. I wish I could invite them to The Party, but they're a bit immovable, see.

I follow the wheel-mill into the next room, where Tatl drops our next lore bomb: 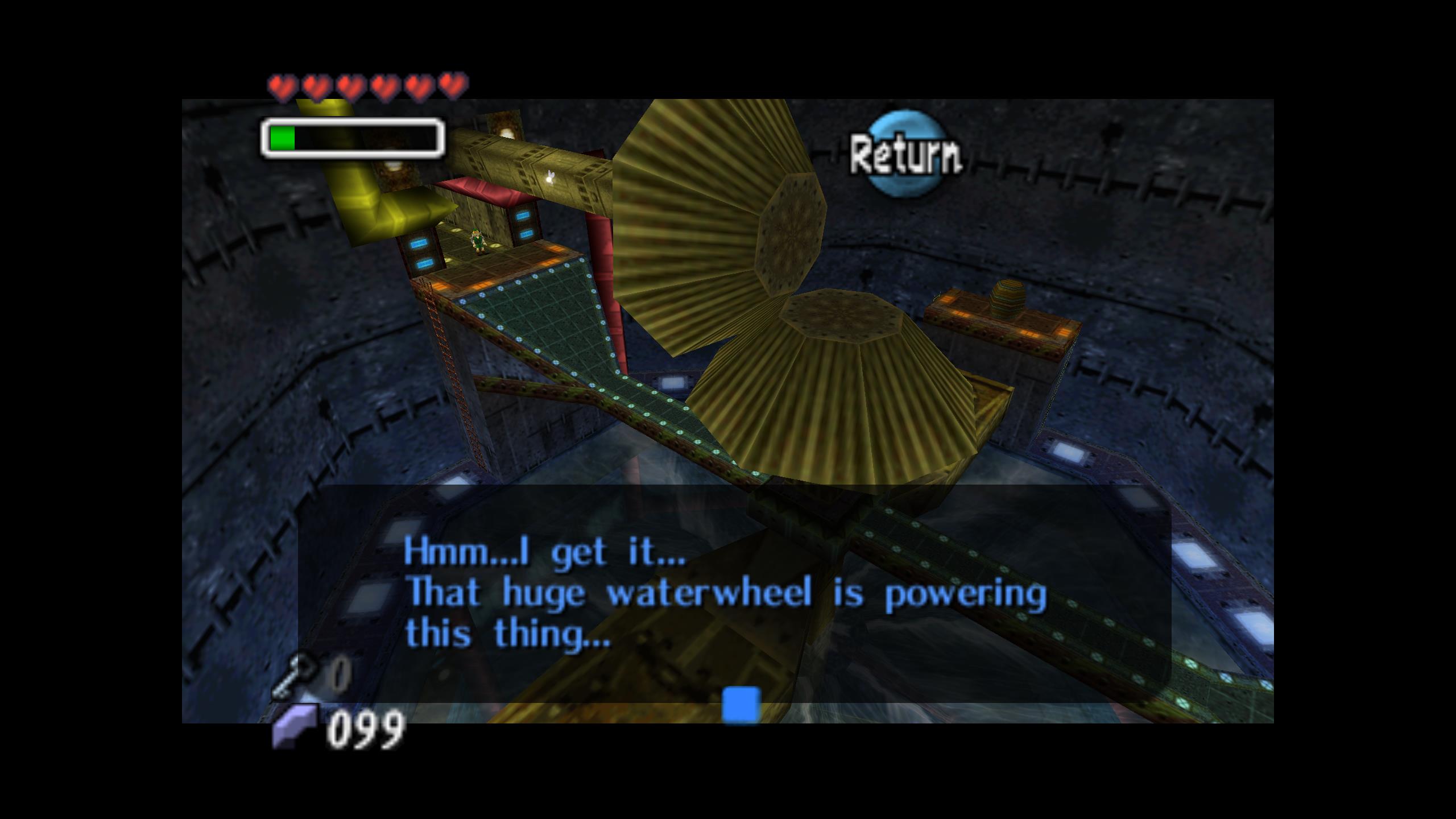 "This thing" is indeed powered by the waterwheel, which, in case you didn't realize, was powered by a single stream of water. That's quite the pressure that stream has got, to power all of this monstrosity.

And what does it do?

It's sure to be something great. We haven't been disappointed before.

Before that though, we can jump on the spinning blades and jump around to the other side where a ladder is encased in water. 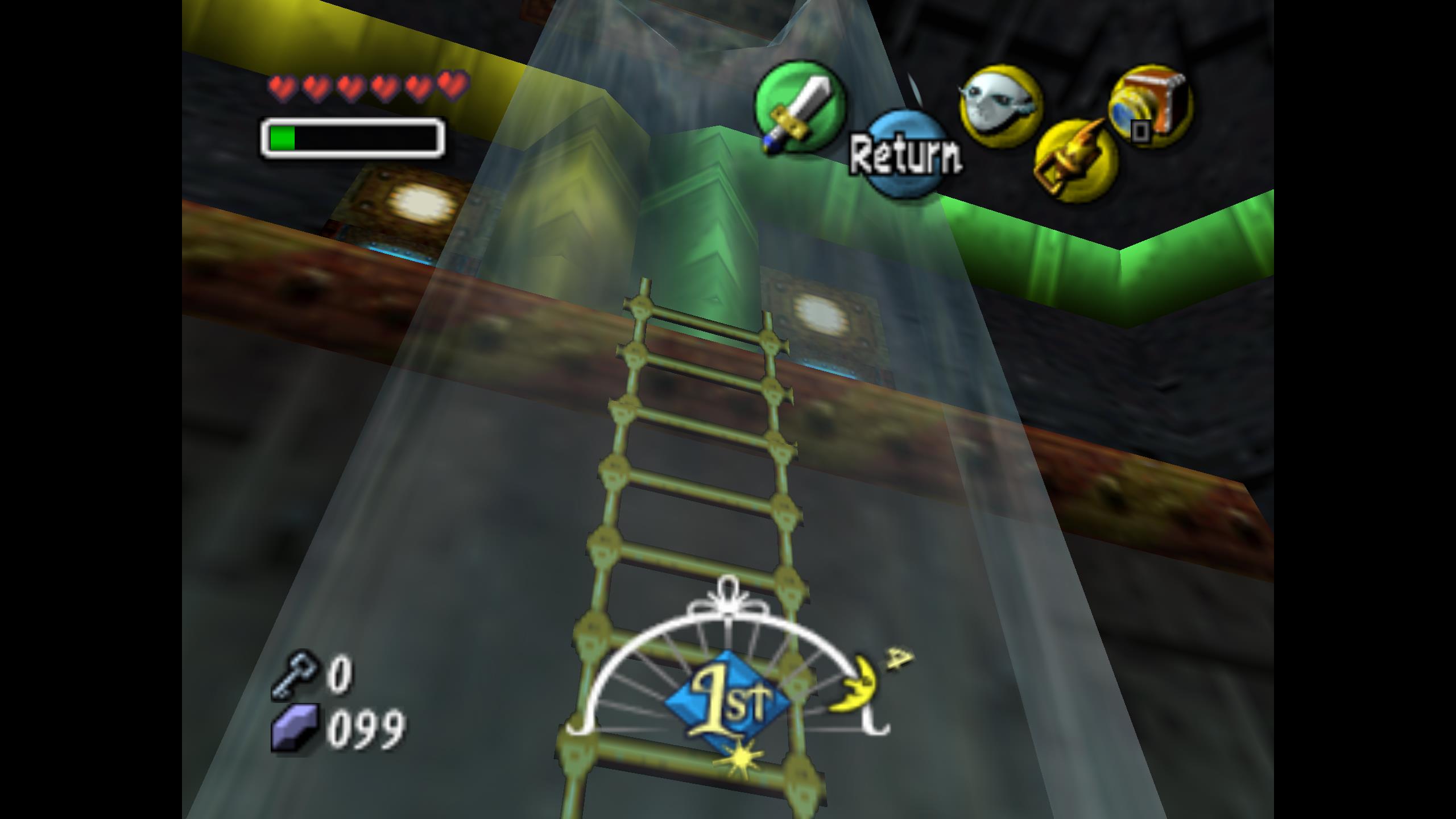 Elevator MADE OUT OF water: Good.

Contrary to what Minecraft has taught us, we cannot use waterfalls to go upwards, and in fact, it here acts as a wall to even reaching the ladder.
No wonder folks today can't complete this game. That just flies in the face of what they've been taught since second grade.

I dive into the bit whisked water and it, unsurprisingly spins me around.

It's a big spin. The water wheel makes the water go round. Someone took the time to make a giant whisk, and so far they're just using it to... oxidize some water.

At least make whipped cream or something. This COULD be a giant whipped cream factory! Or a Slush Ice Machine! They could be making a fortune off of Giant Cakes!

And right now you're SQUANDERING it. Wasted potential!

Shame on you, whoever made this. Was it you, turtle? Seems like something you'd do.

At least we get to see some new creatures: 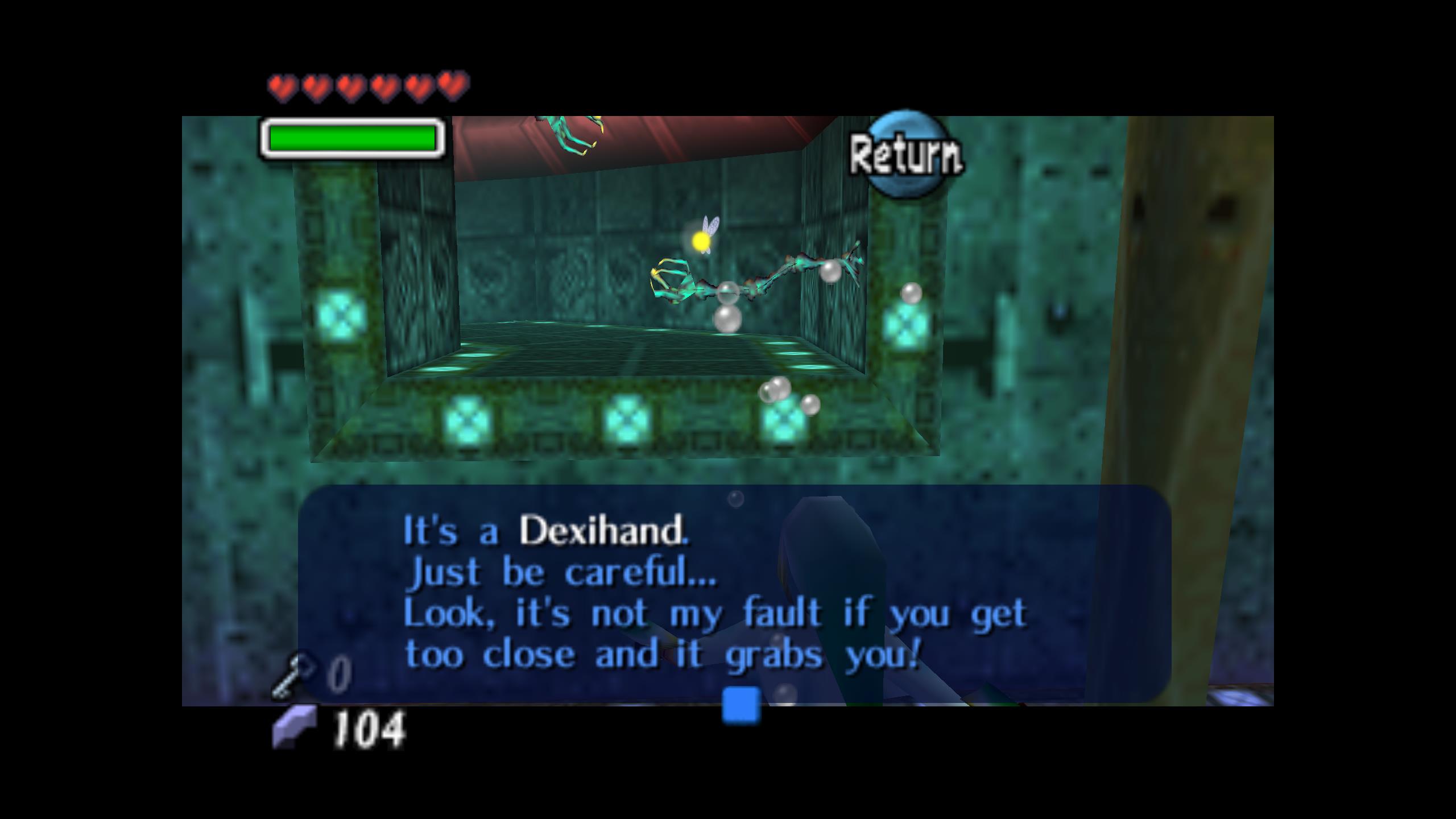 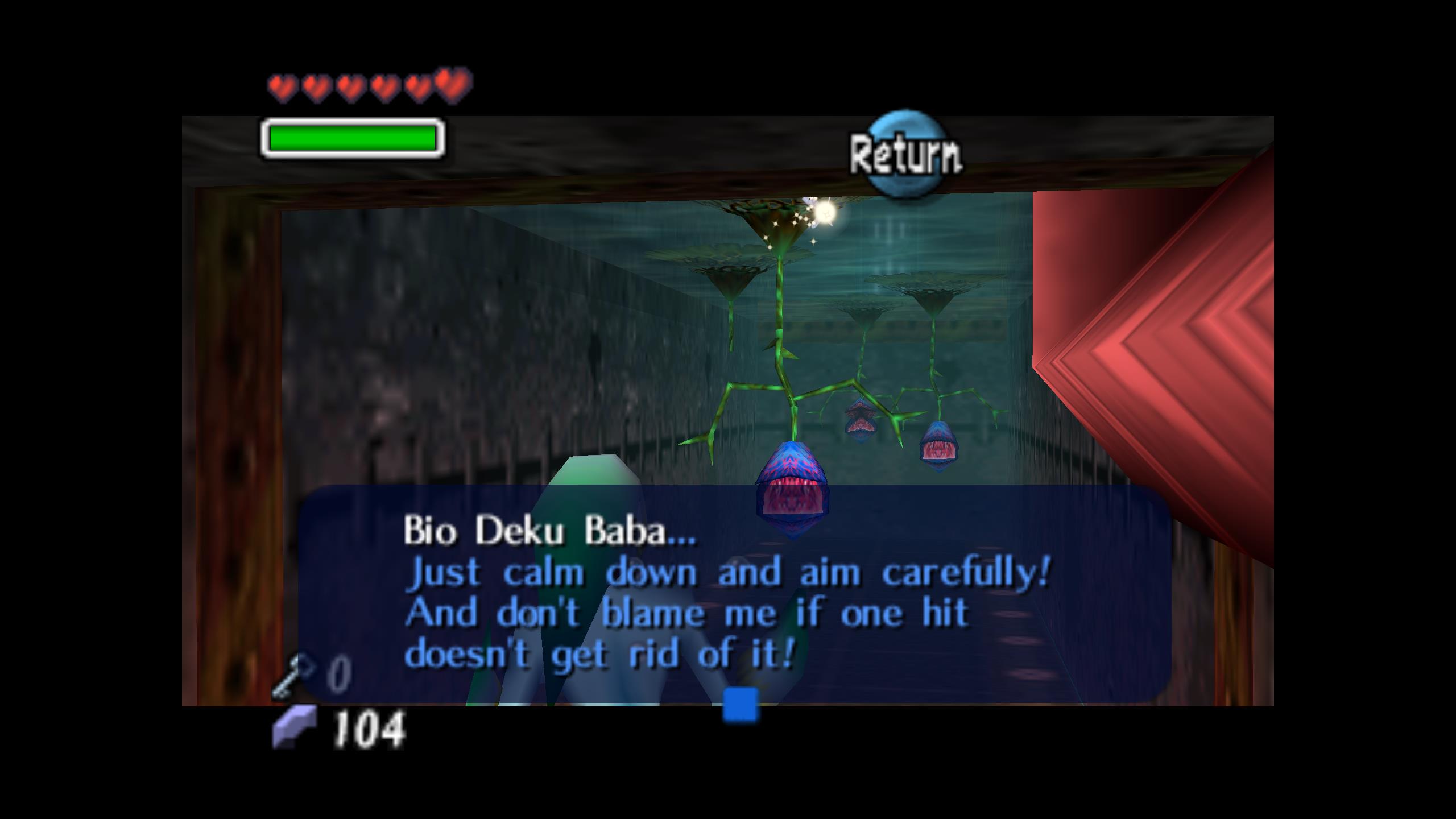 To which Tatl has a very quick response. She knows how our relationship works, contrary to Na'vi. She accepts that all she can do is talk and the rest is up to me. Na'vi was always assuming she did far more than she did. Tatl knows exactly how little she does and chides Link for not doing more. Which, hey, Link needs a good chiding sometimes. 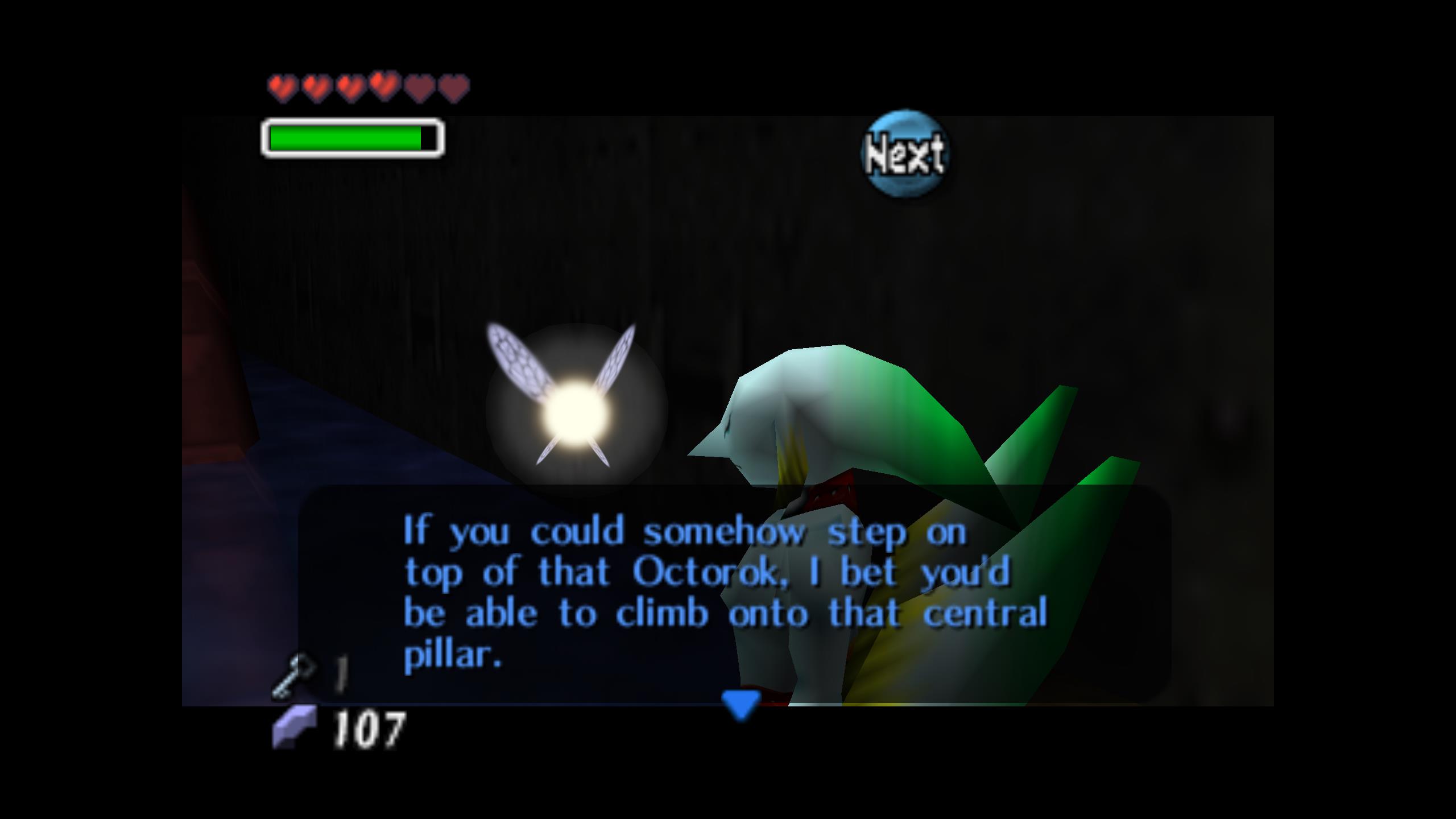 Oh, the Octorok... I... just killed? That Octorok? That's the one? Not another Octorok? I can find another one, out in the ocean. But you want this one?

Guess I just gotta to into the next room. 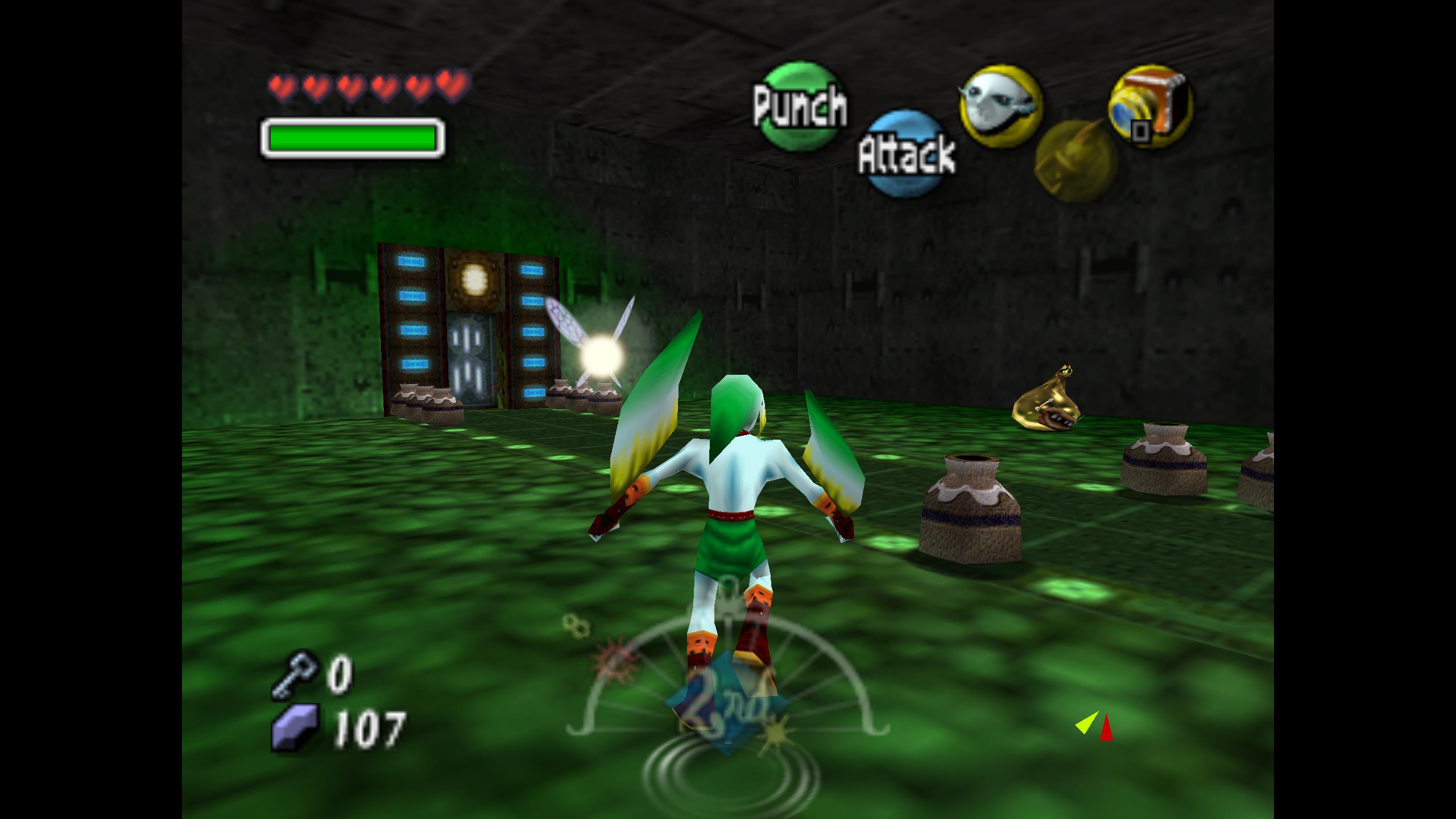 Which is this one, which essentially just a pot-farm (uh, I need, a farm for pots. Of pots. Where there are clay pots) because that's all there is in this room. And then the next room seems at first like a boss room since the door shuts. But it's all empty and there's nothing in there.

Didn't get a screenshot but it's the same as this one just not green. And with less pots.

Buut then you look up at the ceiling 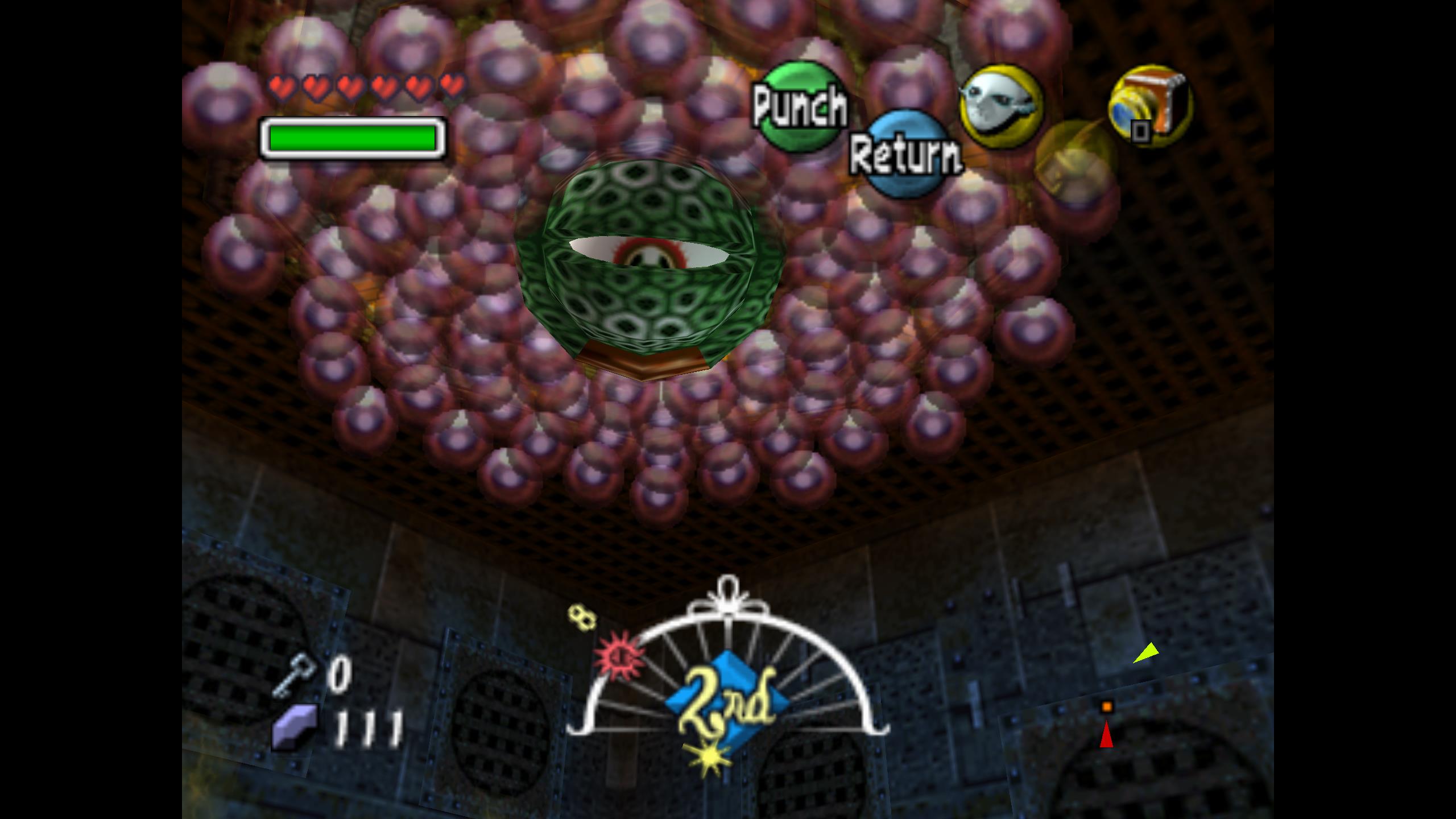 oh hai there. Are you the chef? I have some requests. I find your menu a little... thin. 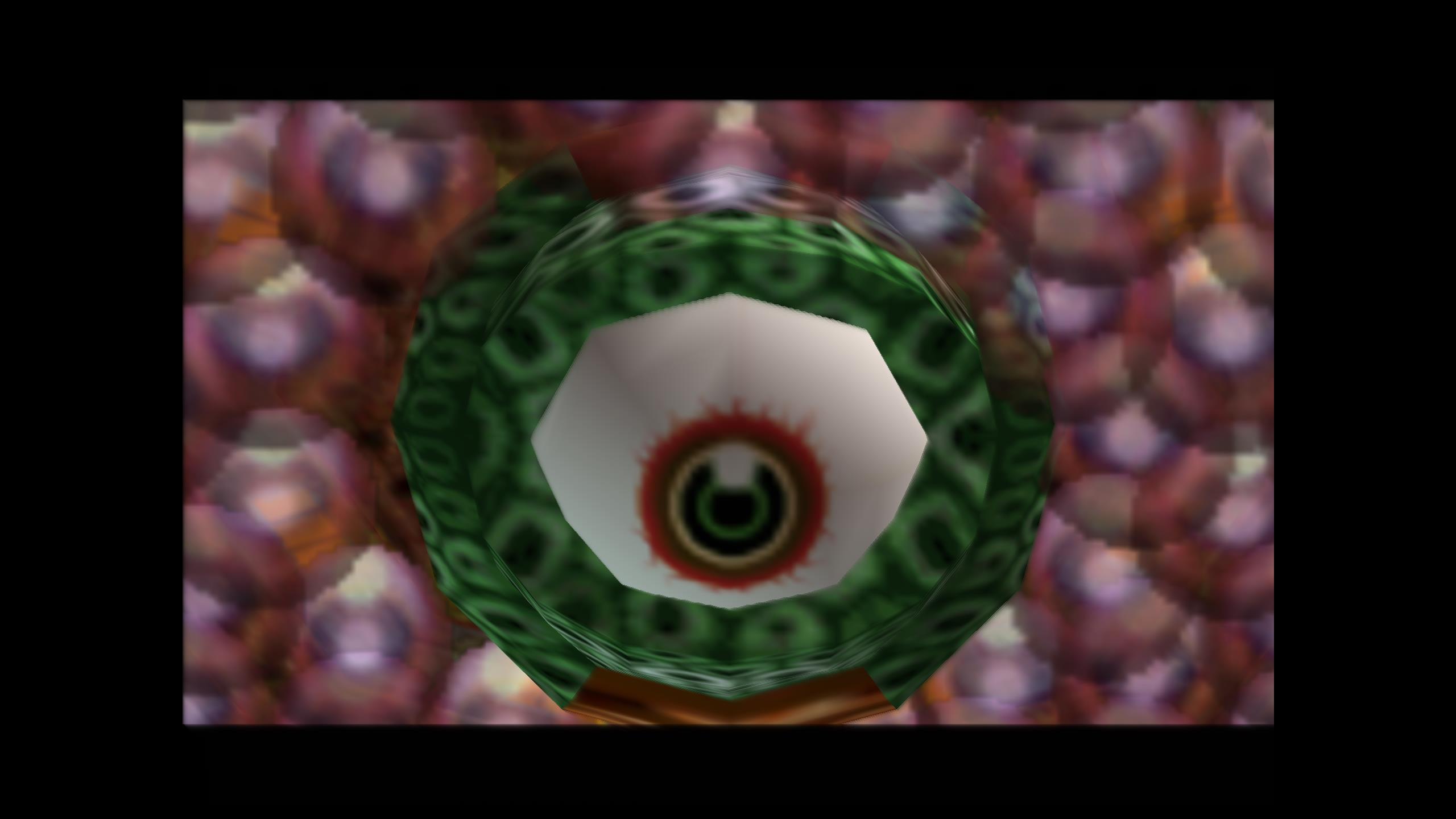 "WHO ARE YOU TO CHALLENGE MY COOKING?" 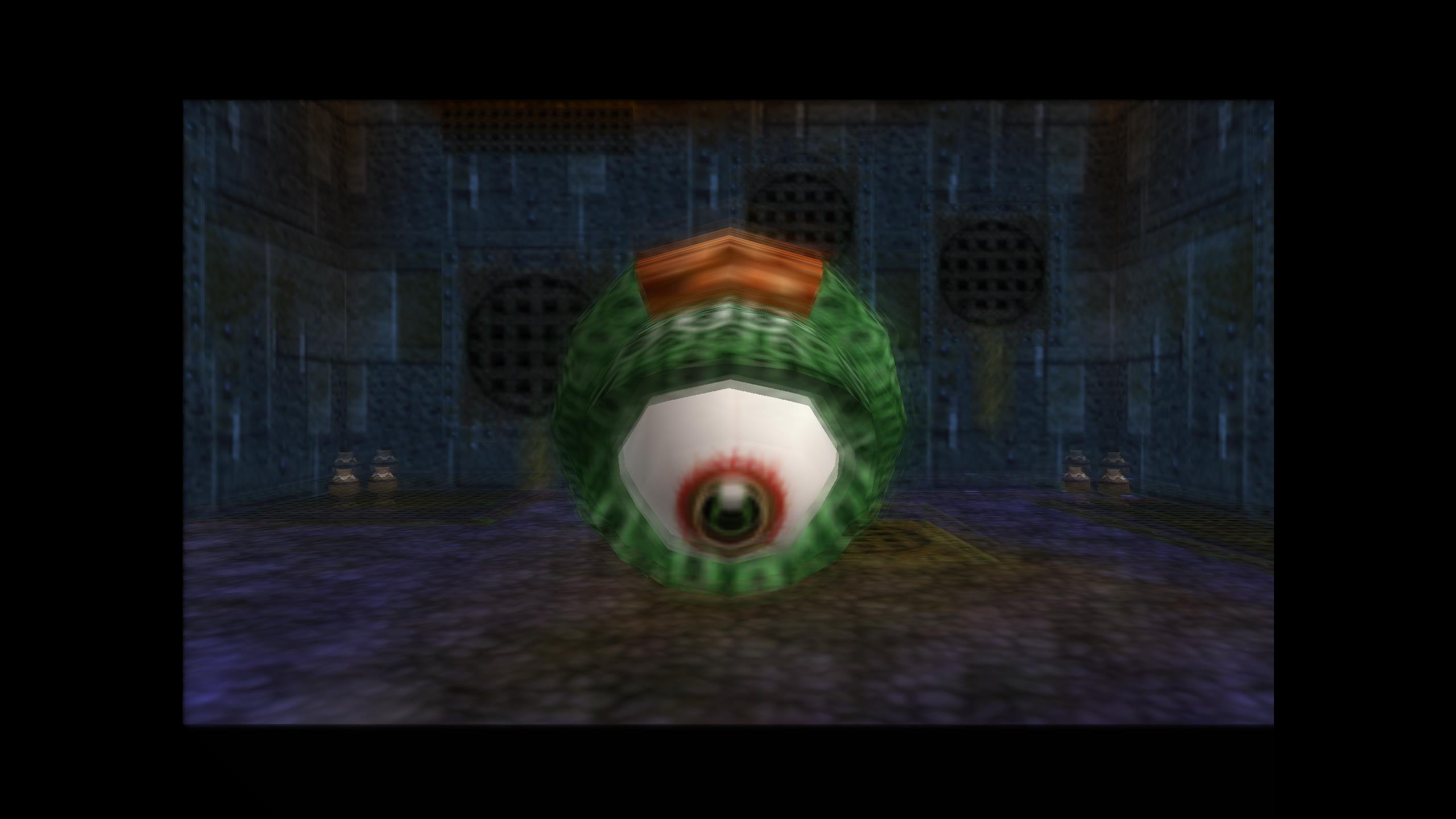 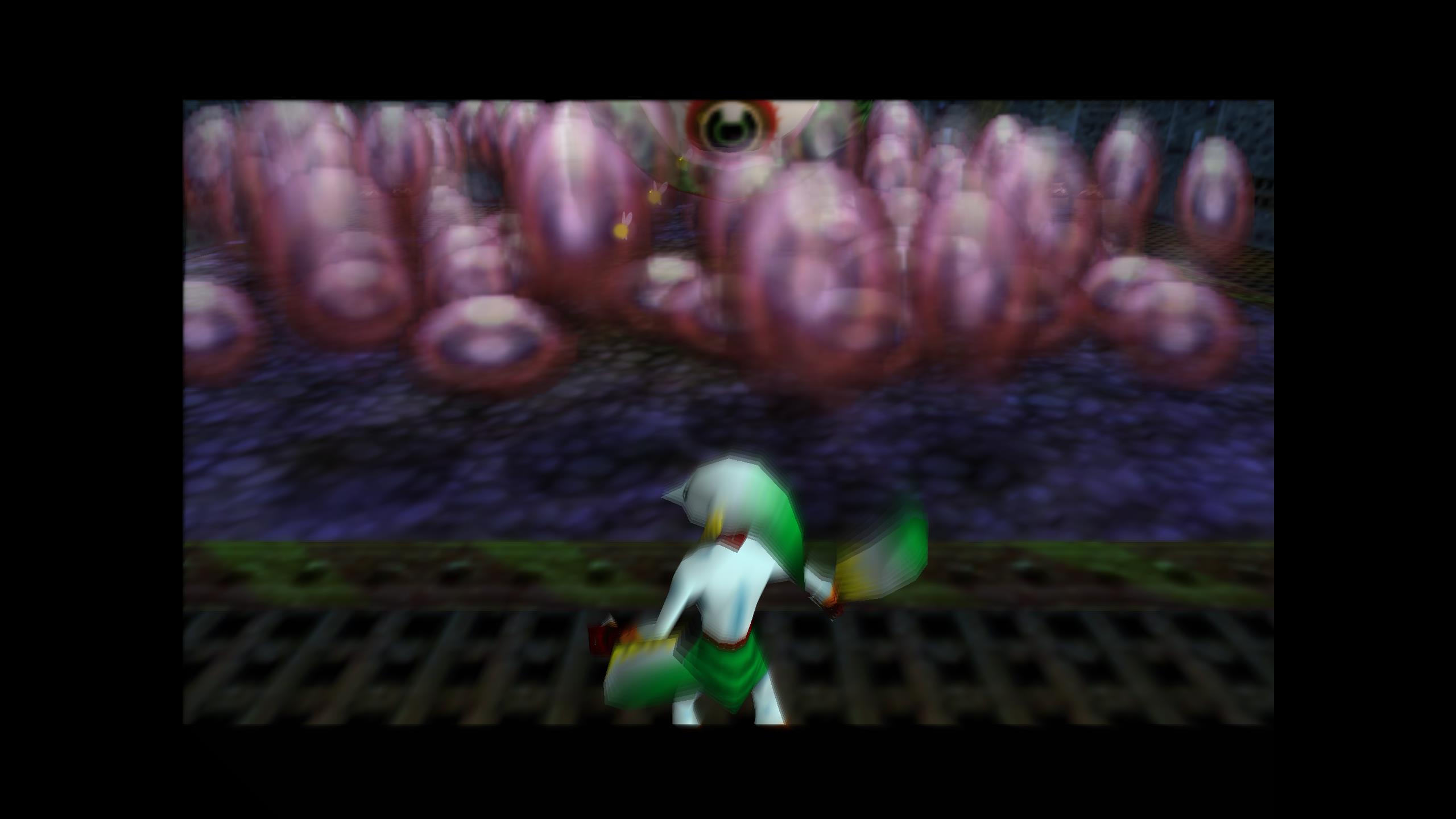 "HERE'S MY ARMY OF MINIONS. THEY DO THE ACTUAL COOKING. I OBSERVE." 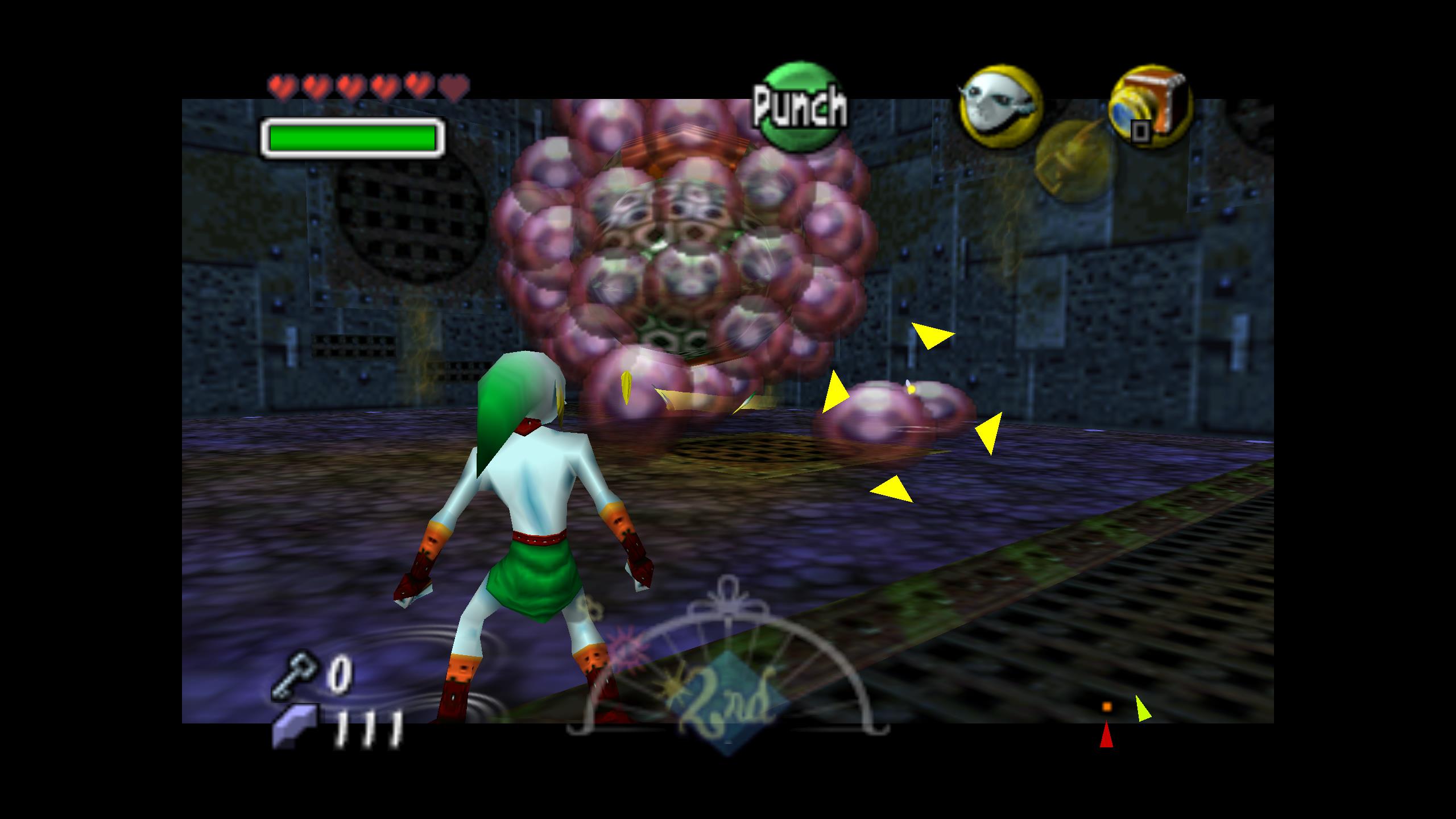 "They also work as a shield when I feel insecure. They're quite nice, actually. Once you get to know them."

"And when they don't do THIS" 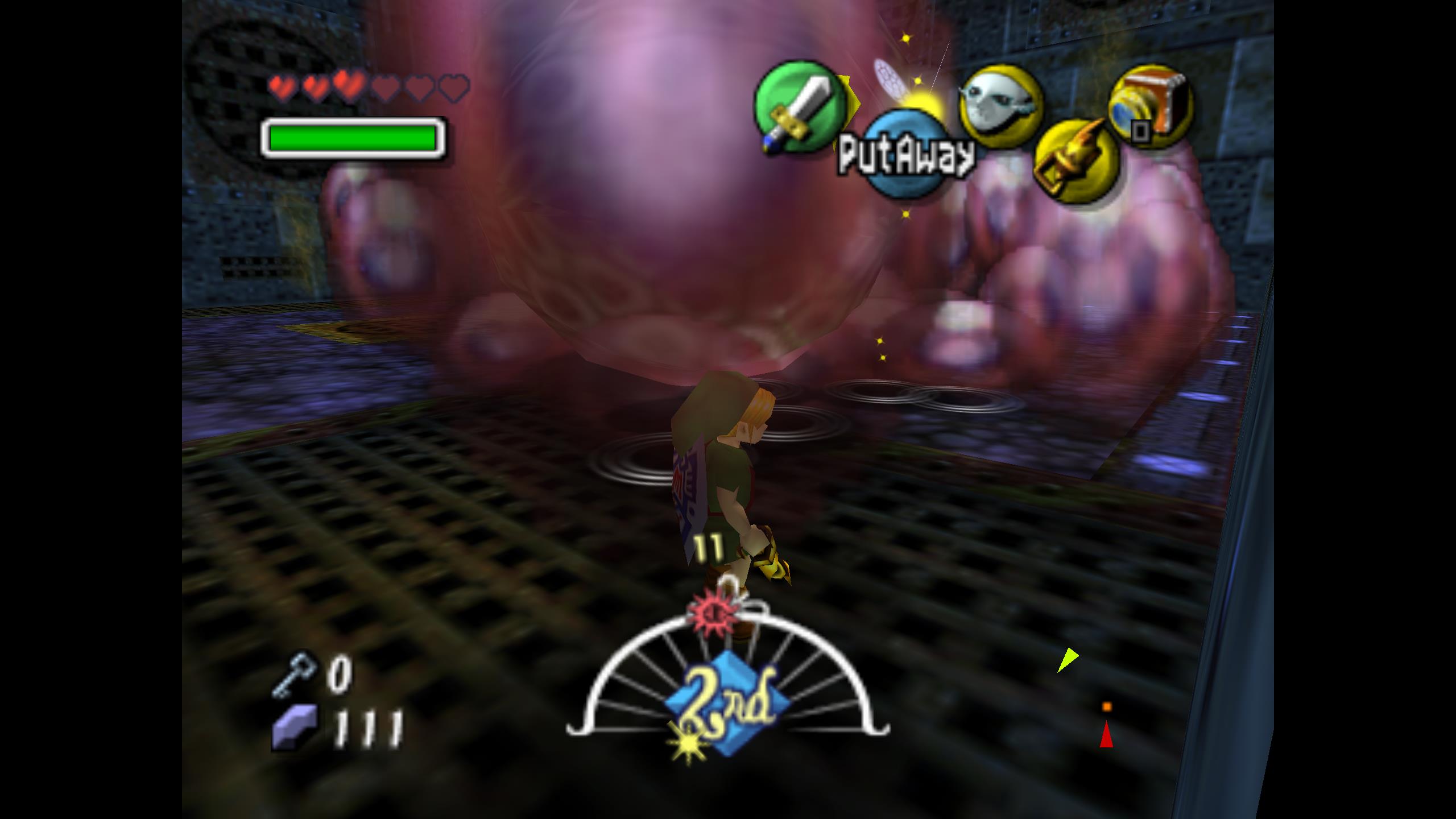 There are indeed layers to this fight. Against an eye chef. The thin eyes out front are those doing the cooking, which explains why there's only water because they're just... eyes. You don't even want water in your eyes so you definitely don't want whipped cream.

Why did they make a whisk then? Well, maybe they didn't make it. Maybe they've just been hired as the chef, and despite their complaints and reasonings to management, they were still told to cook. So they've cooked what they could in the meantime.

And here Link comes, mean food critic he is, and shoots arm-boomerangs at the chefs.

You see, after you clear some of the eyes off the big eye and hit that a few times, they all fall off in a giant blob and jump around all crazy like 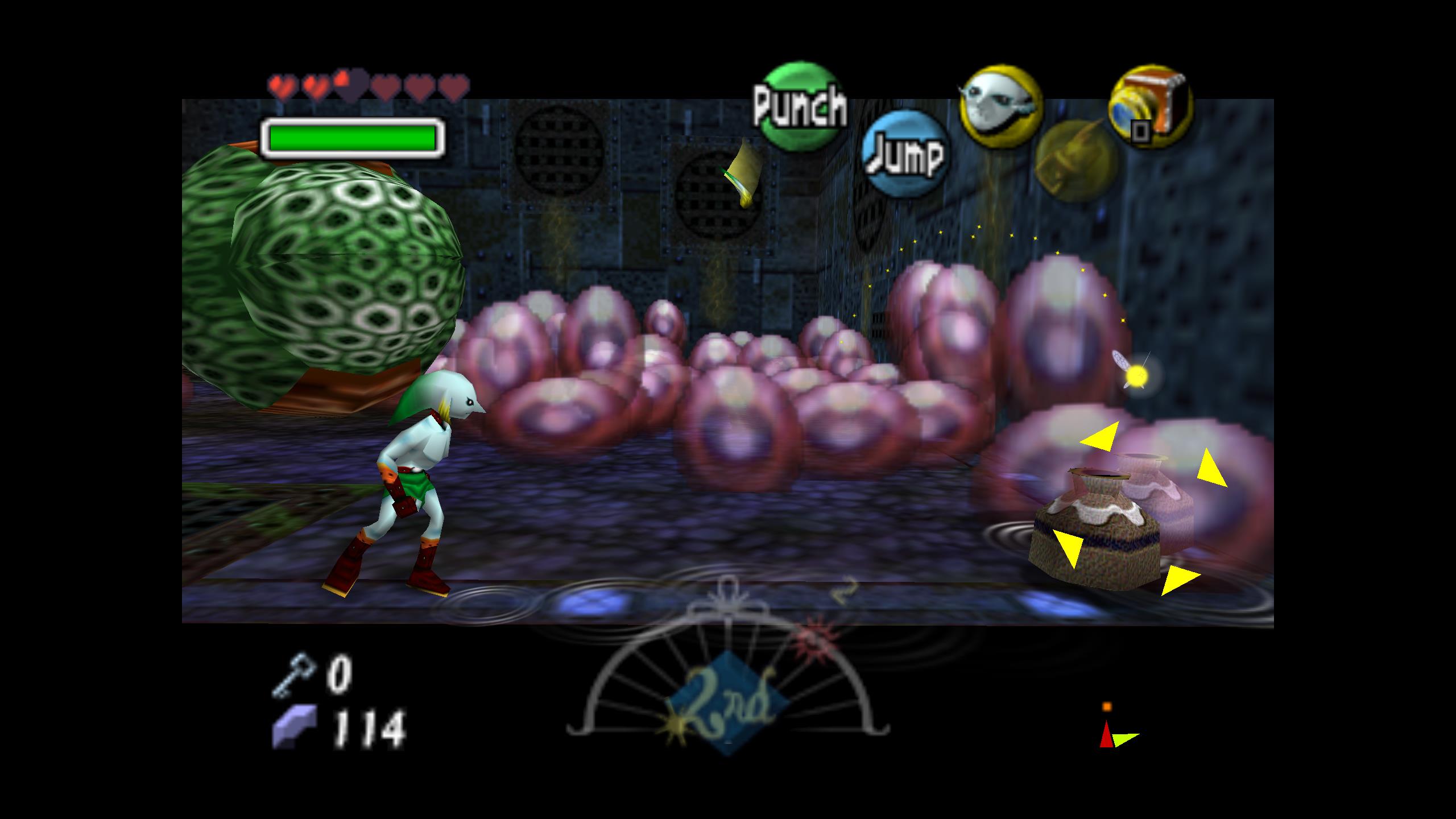 at which I realized that the boomerangs Rockstar Link has is quite good against because they just fly through and hit like 5-10 eyes every throw. It's mildly ridiculous. And quite rock and roll. 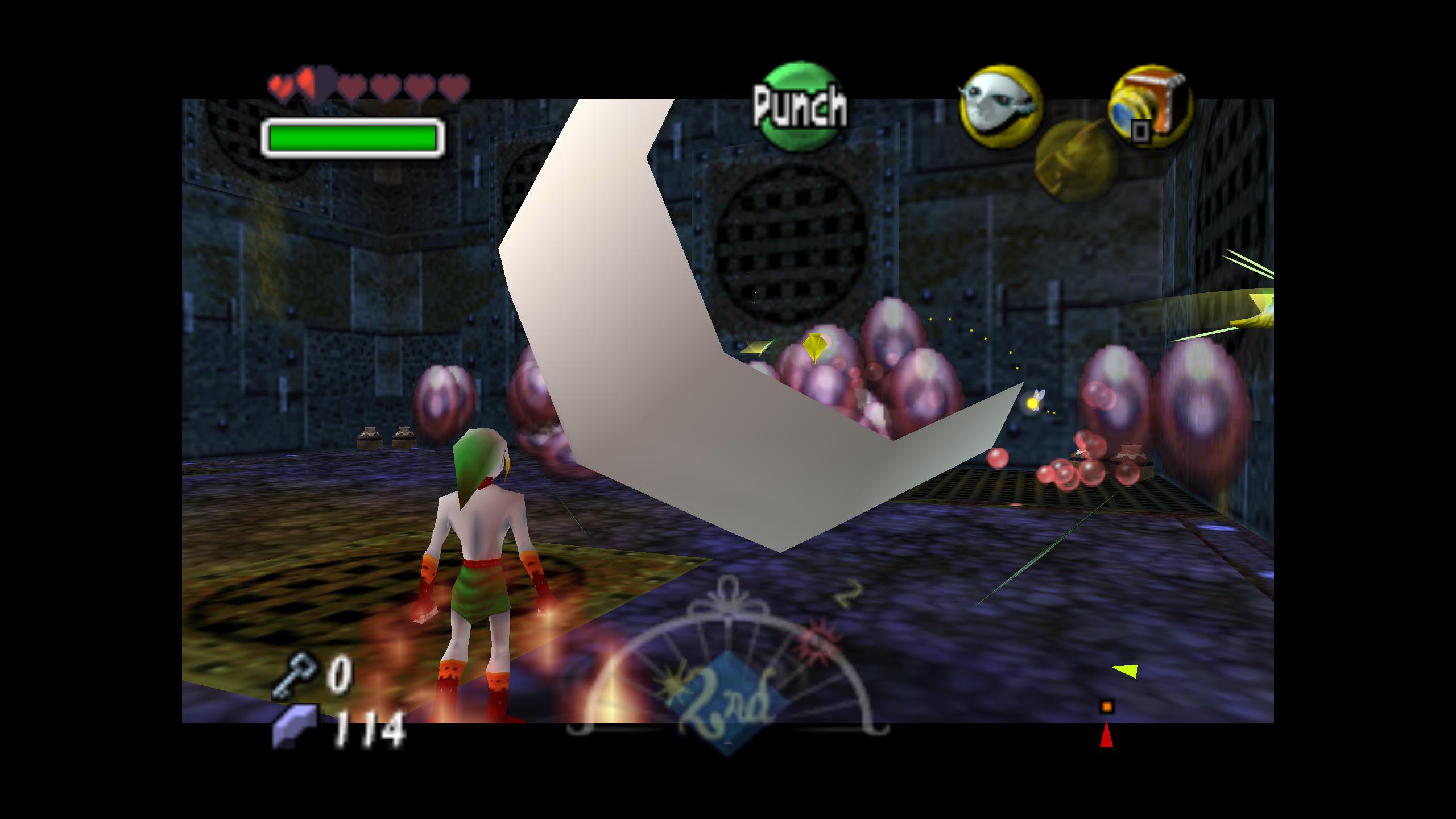 I think this is the big eye clipping through the near-plane of the camera. But I'm not entirely sure.

With all its actual workers gone, it's a pinch to take out the Big Boss... Eye. 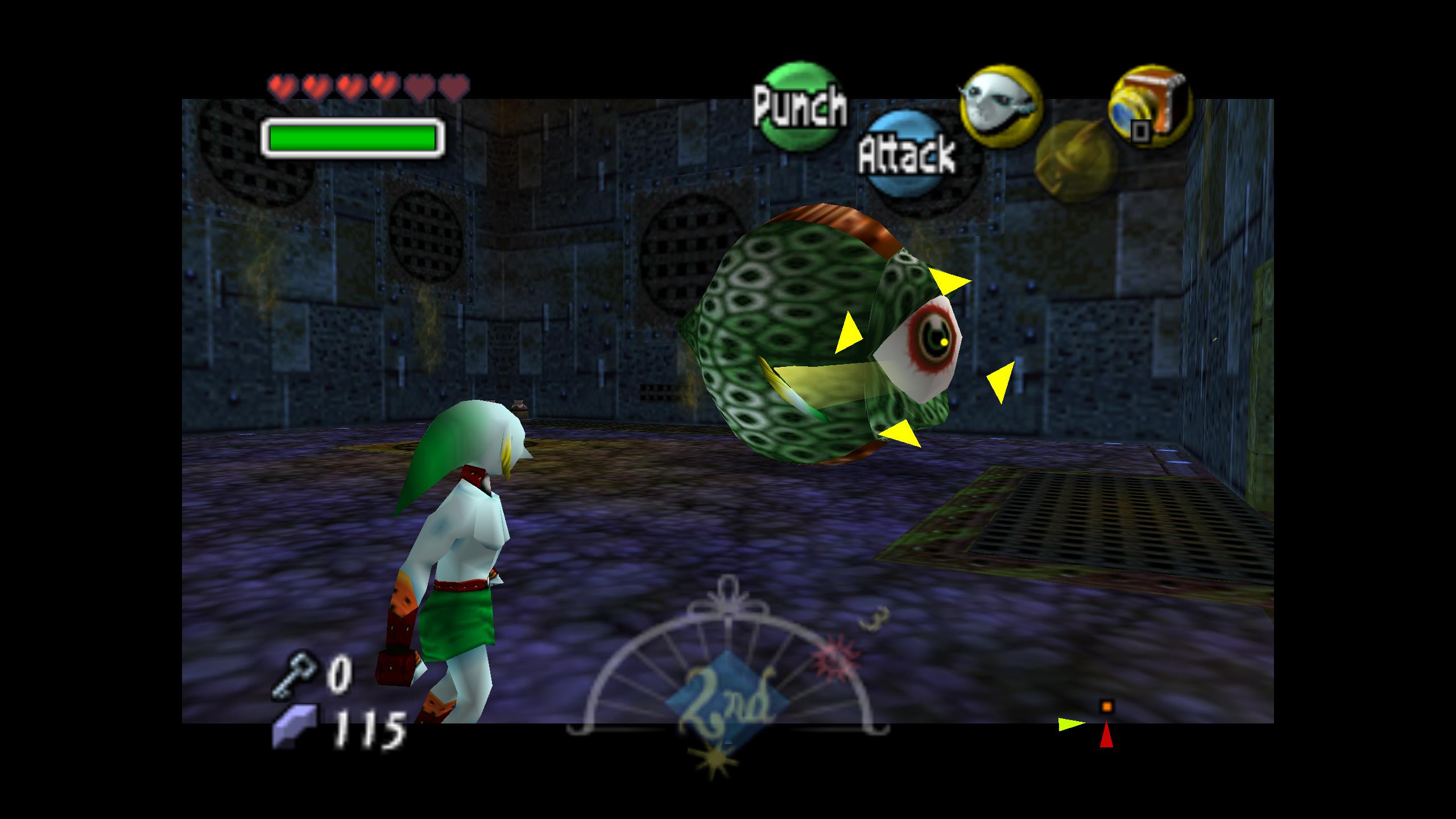 After we defeat the chef, we get to pick up his cooking utensils: 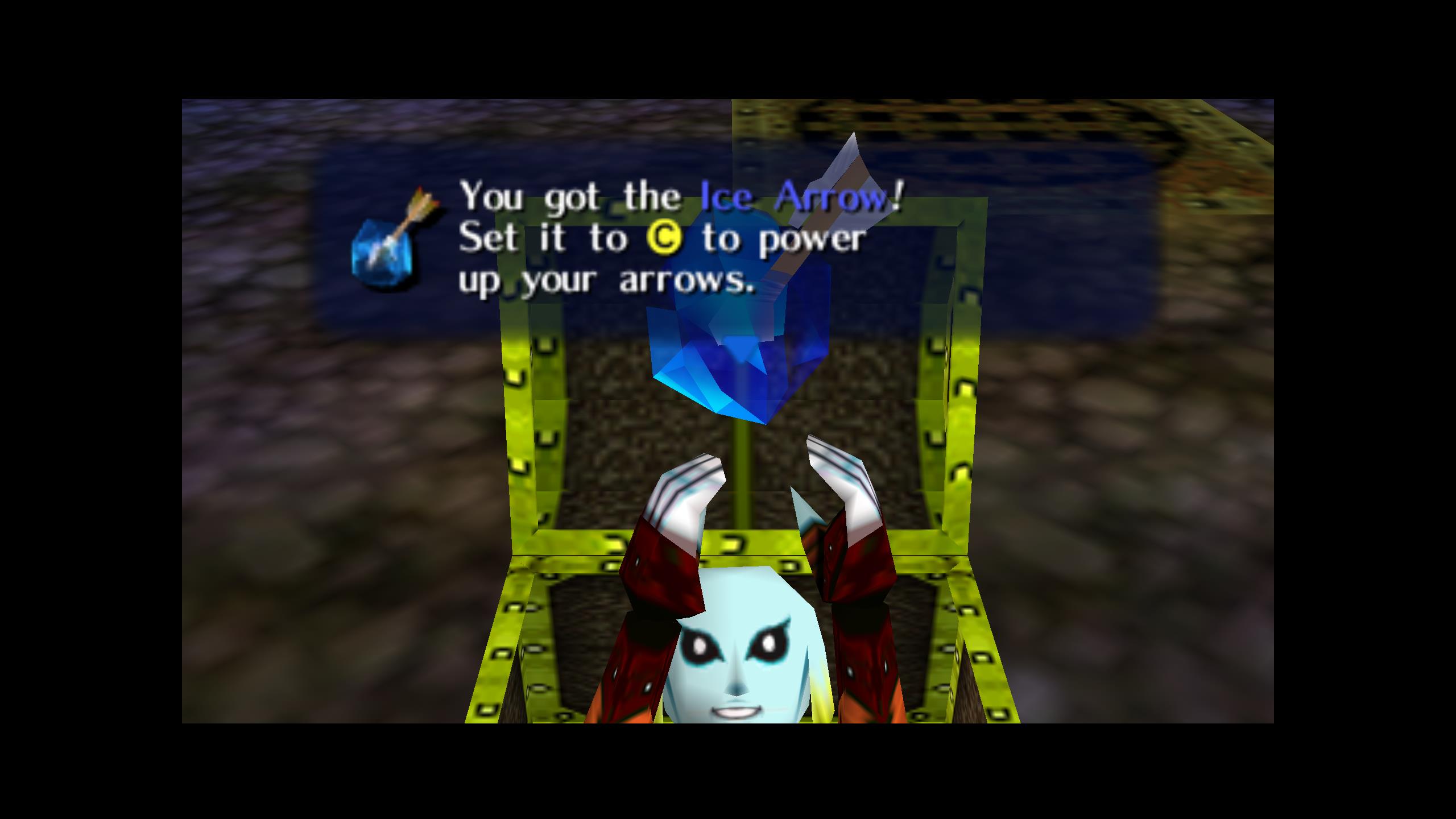 All right. Time to make ice cream! With... water.

I go back out again and find a suitable target: 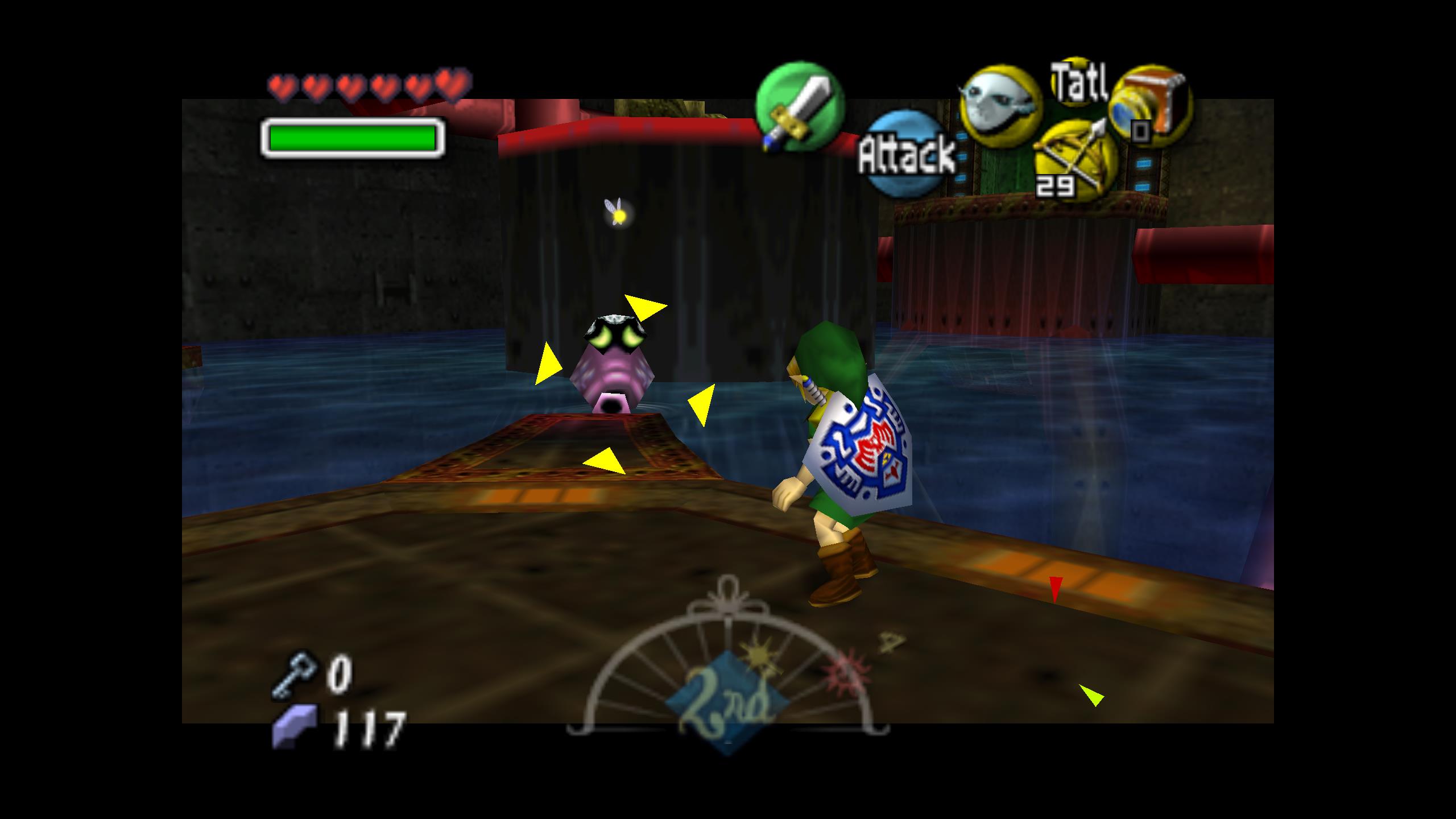 All right Octorok. You'll regret that you ever respawned. Time to turn you into a tasty treat! 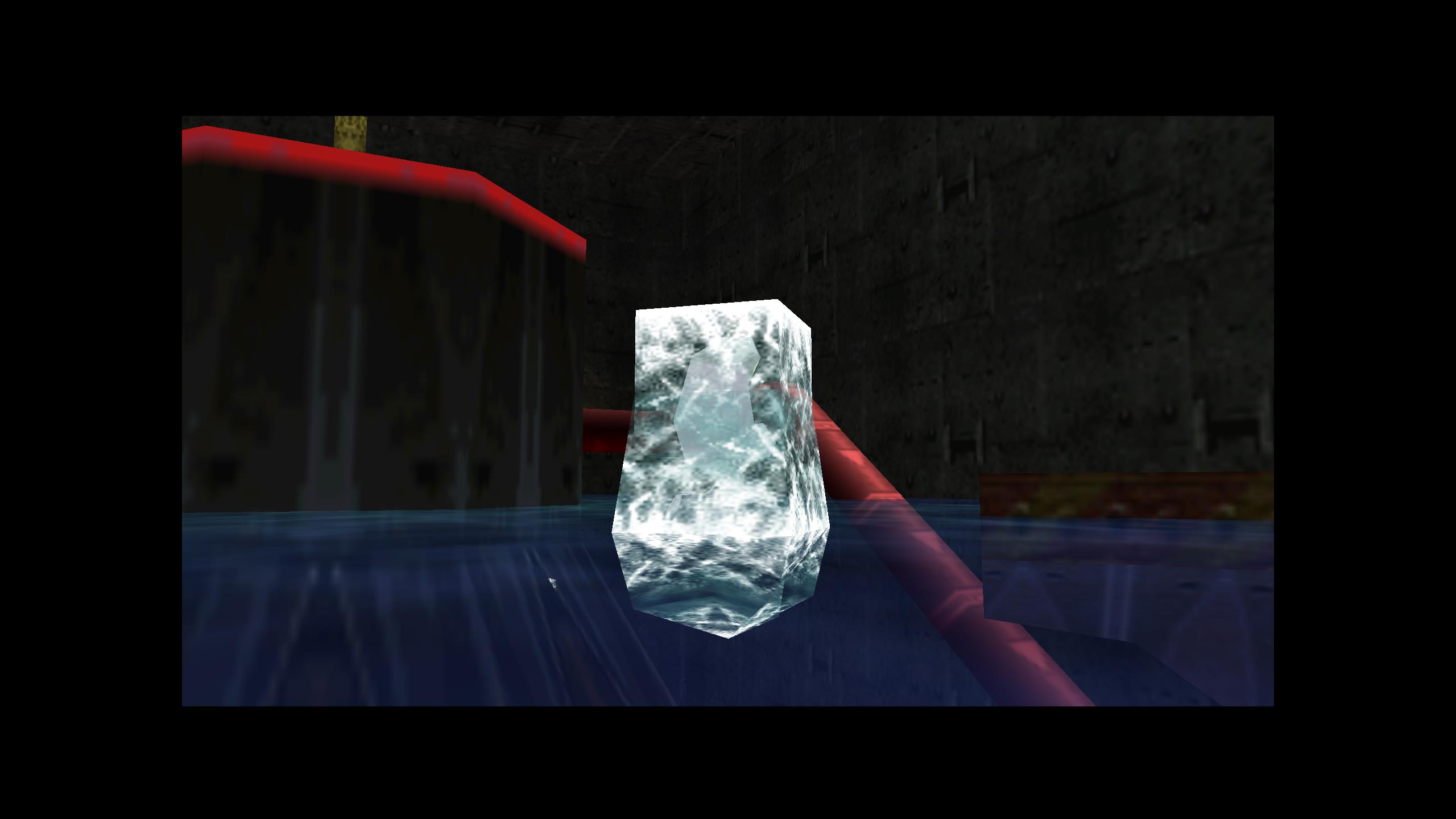 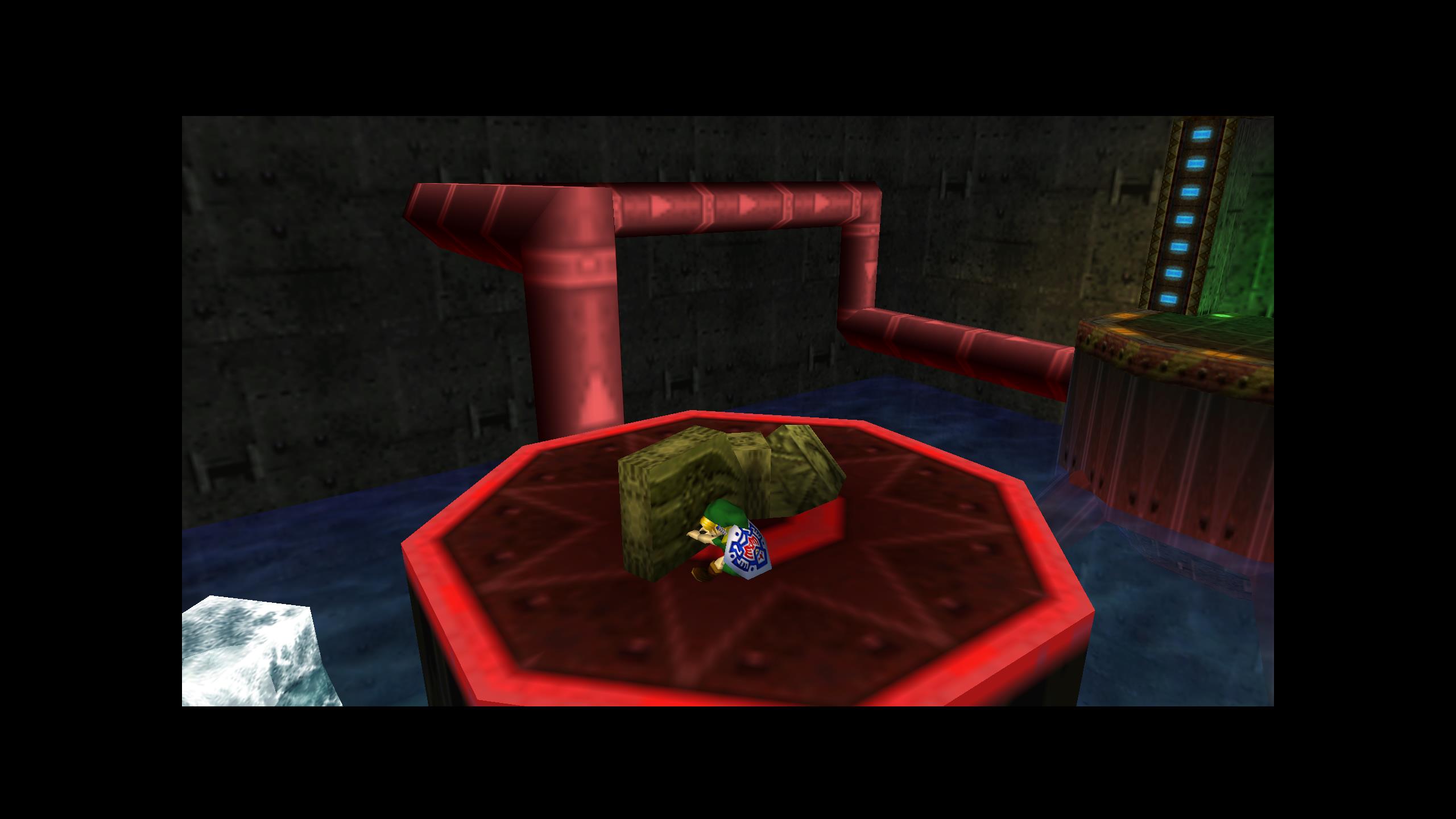 which makes water flow through the red pipe.

Whereas before, it only flew through the yellow pipe.

This sounds like it's important but it's also exceedingly boring to explain so let me just leave it there. There is now water in some parts of the red pipes throughout some parts of the Temple. Yes, riveting, I know.

Why it isn't in the whole part of the red pipes, I do not yet know.

Because I decided to call it here.

I know, a bit of a shorter episode. But these dungeon episodes either run long and have me condensing them, which also takes longer do, or I do it like this and keep myself sane.

But I think this was about half-way through it (I did skip some stuff) so I think we can reach the boss next time no problem.