[There used to be a Vine here, but Vine... ceased to exist. So they don't work anymore! Sorry :( It was probably fine.]

I've barely been working on the game over Christmas and exams have kept me busy since then, but the look was more or less finalized before then; I just never got to write about it.

First, a little disclaimer: This is by no means the final look, and I expect it'll change and evolve at least once more before I'm done, but now it at least looks coherent and like someone put some thought into it.

The keyword, as you might have guessed, is particles. I spent a lot of time messing with Unity's particle system, which almost every element now is based upon. It's pretty lucky that the Shuriken particle system is really easy to work with :) 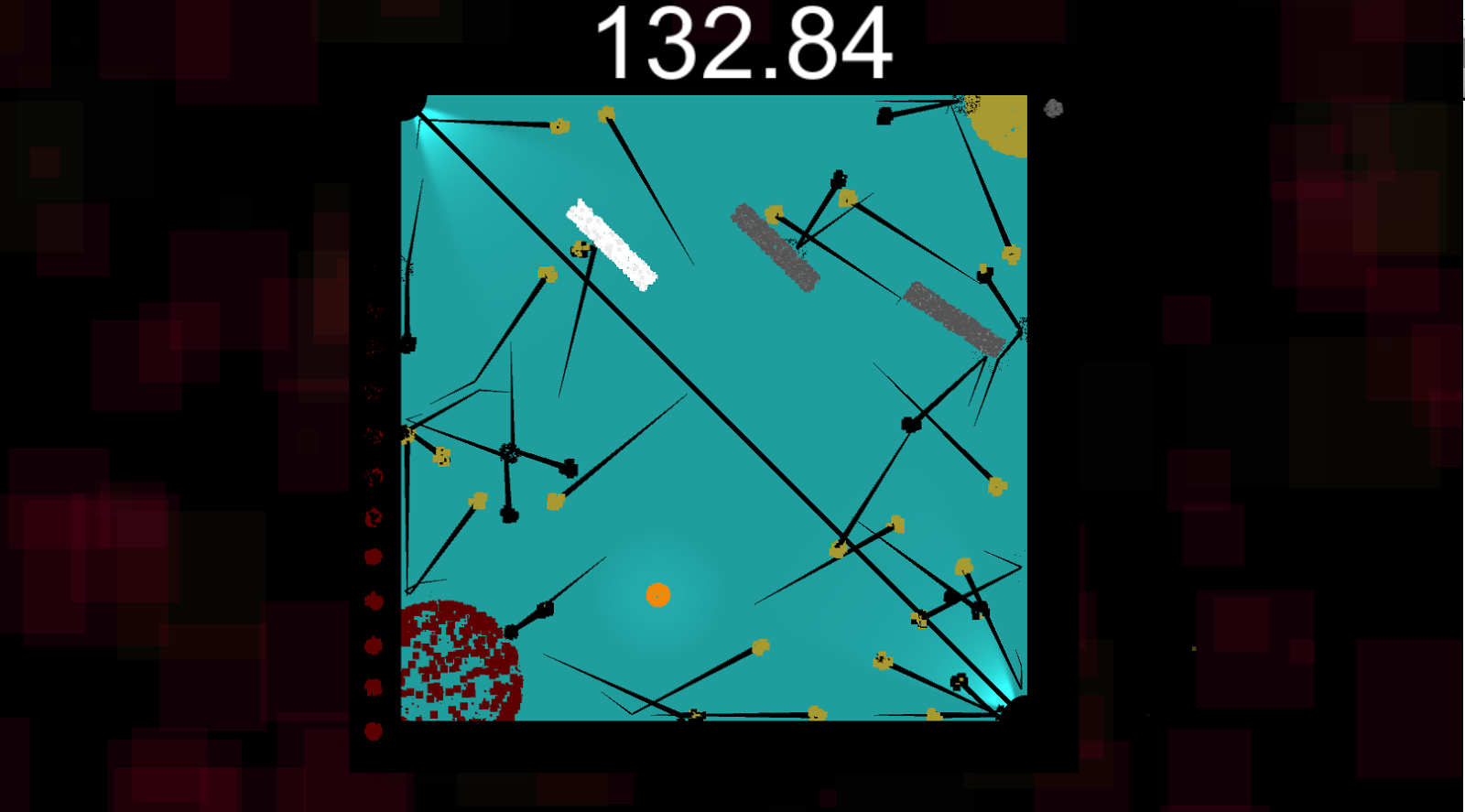 The Vine shows the movement really well, but it doesn't really show the details of all the particle elements, as can be see more clearly here. The background is reddish because the red corner was just hit.


I started with the little idea that I posted a teaser of a while back, with a new repeller look, based on particles. Then I took it further: "What if the player was made of particles too? The bullets? The two corners?" And then I did that. I might have gone a little overboard, but my focus with these particles was to make them as close as possible to the static version of the object, so it was easily distinguishable at a glance. The particles just adds movement to the whole scene: Makes the objects seem alive, teeming, active, which I felt was sorely lacking from the previous look.

Finally, it added a dimension I did not expect: It made the movement feel better. Just moving around the player ball with the stick felt better when it was made of particles. Especially pushing around the bullets with the repel-sphere feels awesome now, without a single change to the mechanic itself. Which is really cool, and just shows how important minute details like this can help with the feel of the game. This is also one of the prime reasons why I'm pretty satisfied with sticking with particles for now.

Having created this, I faced my second challenge: Remove all the text. Previously, I had a bunch of ugly white text around the arena, showing different information the player needed: Could they redirect, how many blocks where available, etc. Sure, I could have touched up the text quite significantly and actually made that look good, but something about the text was bugging me: I don't want the player to look away from the arena. I want the focus to be in the middle of the screen, and any glance I force away from that is something that the player is going to dislike.

So I started figuring out how to translate each element into a visual representation that was easily decipherable while also out of the way enough that it doesn't annoy the player. So let's go through each element: 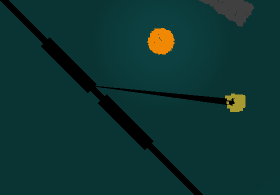 It's the small blocks right there, in the middle of the line. 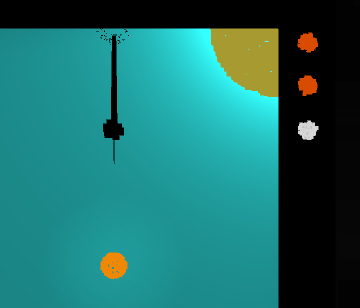 [There was another Vine. It is now lost to time.]


The final thing I need to talk about is the background, because this is not just a black void of nothing anymore. Sure, it is still mostly that, because I need it totransition nicely into the borders of the arena, but I've added a key ingredient of feedback: A GIANT Particle system (Fanfare!). Yes, more particles. This one is quite different, though. It's a "feedback" system. They idea behind it was to gently have it respond to what was going on in the game: If a lot of stuff is happening fast, they move frantically, blinking in and out of existence; but in the beginning of the game, where there are only a few bullets and the player is relaxed, they move slowly, barely showing signs of being there.

This is right now achieved in three ways: First, whenever the player scores, the blink yellow (the color of the goal in the right corner). Whenever the player loses a life, they blink red (the color of the corner the player is protecting). Secondly, the speed of the particles is dependent on how many bullets is currently on screen, meaning the more bullets, the faster the background seems to be moving. Finally, the amount of particles in the system is dependent on the score, meaning that the count will slowly increase as the player is playing the game.

To clarify, this is a different system than the one showing the score described above. That one shoots the small yellow ones out, seen here: 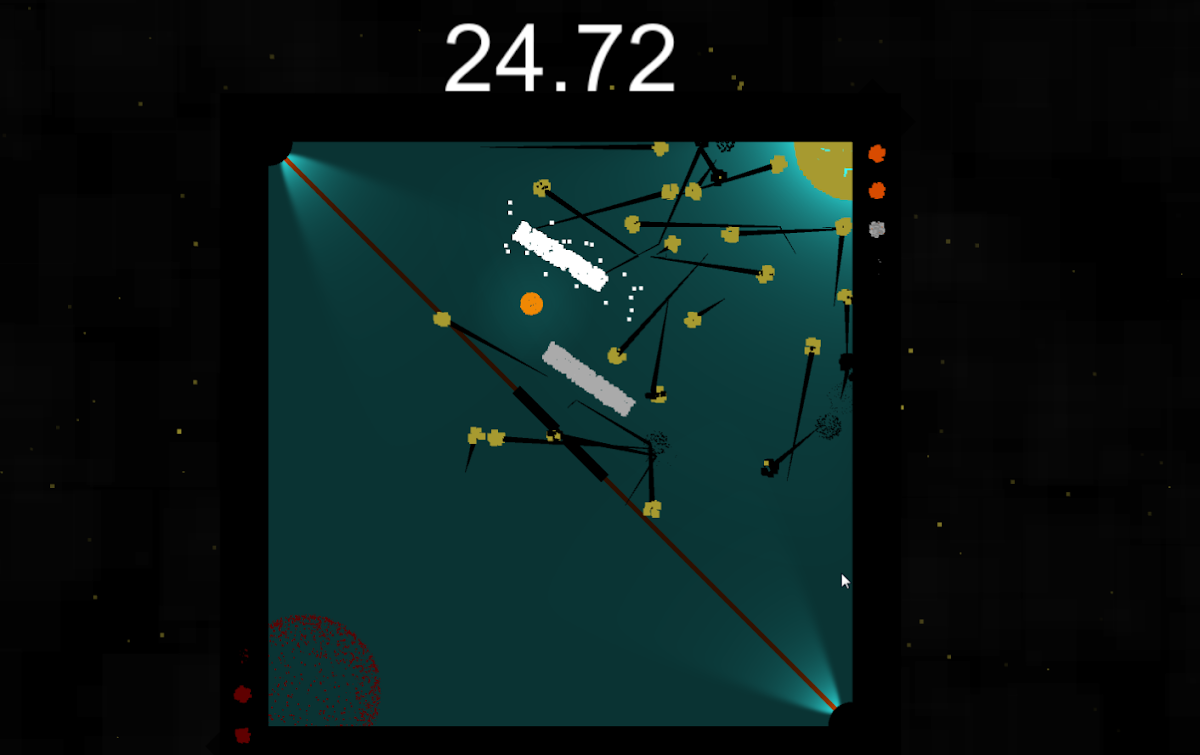 It's those small yellow dots flying all over the background.

These two systems together add up to the full background. The entire background definitely also needs some tweaking, but it's a dangerous one, since I can mess with small values forever and only really achieve what's only seen as in peripheral vision for the player, which is definitely not the focus.

I have some plans for the future, though. I want to add a bit more light to it. Have light maybe move more vividly, or something. Add a bit of glow or Tron-like lighting to it. But that's for next time. Right now I need to squash a few bugs and finally start play-testing.